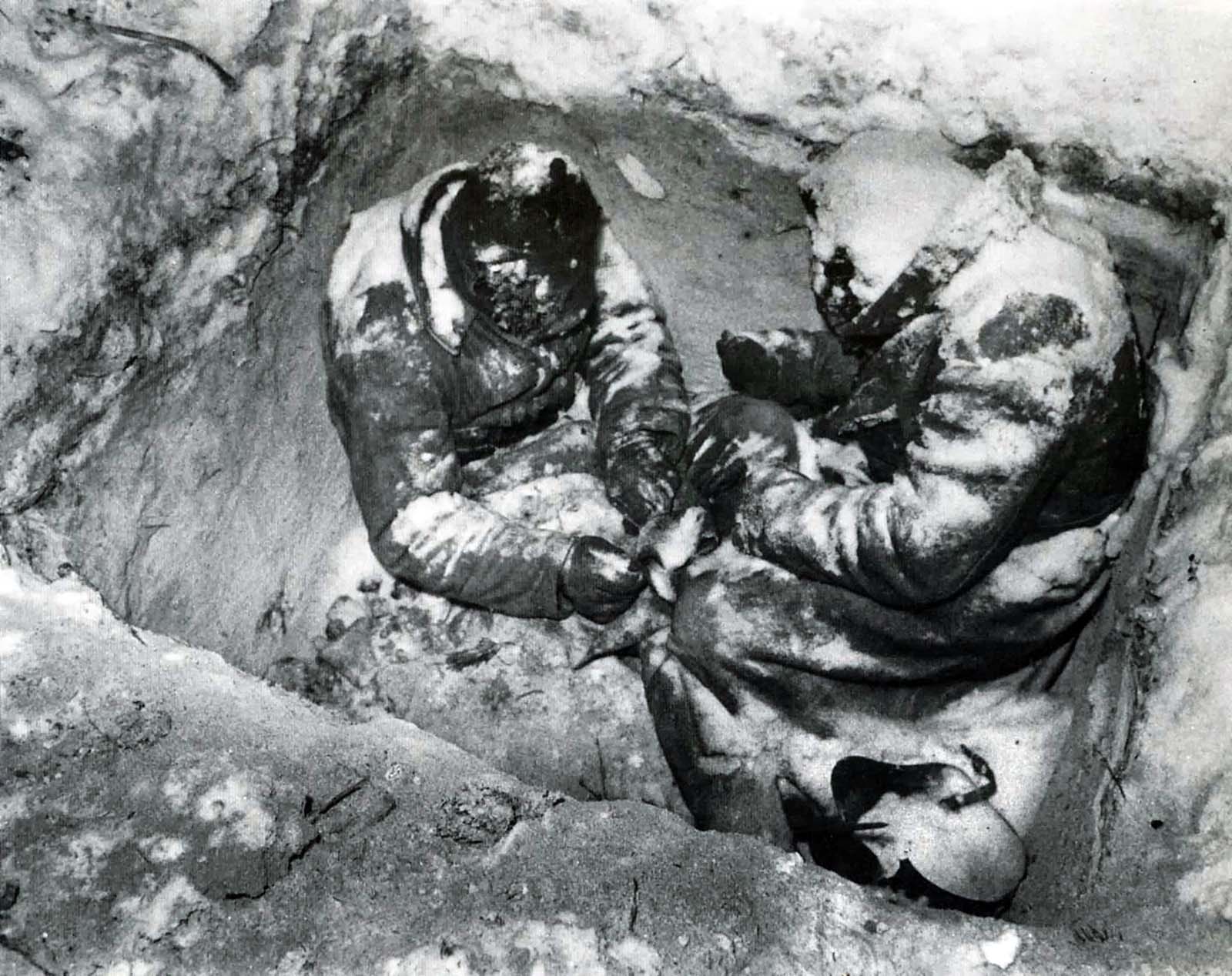 The Soviets had to bring troops from far away to the Finnish front. Some of the soldiers were from the south and hadn’t ever experienced winter conditions like this before, combine that with Finnish patrols destroying the support lines and the hardest winter in a lifetime. The lack of food and supplies was huge, they did lack winter warfare training and gear.

The saddest thing about this is that just by covering that fox hole with some branches and putting snow on top the temperature in the foxhole would have risen to about -3 Celsius.

With those heavy coats, the soldiers might even have felt the necessity to strip some layers. But that’s what happens when you send untrained troops to the Front. The Soviets didn’t care too much for their soldiers’ training or life.

Freezing to death is one of the most peaceful and non-violent ways of natural dying. After the shivering stops and you slip into hypothermia, it’s pretty much a warm and fuzzy sensation until you slowly doze off as your vital organs slowly begin to shut down.

The reason people get that warm and fuzzy feeling is that before that moment body tries to store warm blood in and around vital organs, away from extremities, if the person stays in the cold the body gives up and releases the blood back to the body, giving a brief warm feeling before dying.

You reach a point where your body core thinks it’s too hot, some victims of hypothermia are found naked, having stripped their clothes off because they literally thought they were overheating. It’s called paradoxical undressing.

Twenty to fifty percent of hypothermia deaths are associated with paradoxical undressing. This typically occurs during moderate to severe hypothermia, as the person becomes disoriented, confused, and combative.

They may begin discarding their clothing, which, in turn, increases the rate of heat loss. One explanation for the effect is a cold-induced malfunction of the hypothalamus, the part of the brain that regulates body temperature.

Another explanation is that the muscles contracting peripheral blood vessels become exhausted (known as a loss of vasomotor tone) and relax, leading to a sudden surge of blood (and heat) to the extremities, fooling the person into feeling overheated.

An incident happened (known as “sausage war”) where attacking Russians behind Finnish lines came upon a Finnish field kitchen. The starving Russians ended up halting to eat anything they could find.

Also by December 5th, the Soviet 155th Division was making strides towards Ilomantsi. On December 7th, Pajari arrived on the field and took command of the soldiers, and the Finns under his command were renamed Task Force Pajari. By the 9th the front was stable but still, there was a massive threat of a Soviet breakthrough.

Still, Talvela decided that what was called for was a Finnish attack as he felt this would assist in raising Finnish morale and would also take the Soviets by surprise.

The attack was to begin on the 10th, but before this could take place, the Soviets made attacks on their own trying to flank the Finnish positions. These attacks were halted and the Finnish counterattack was reset for the 12th. It was in these Soviet attacks that the so-called “Sausage War” took place, which is one of the more interesting notes of the entire Winter War.

The Soviets had been able to sneak behind the Finnish lines and went undetected by the Finnish troops. The Soviets were about three miles to the northwest of Tolvajärvi and were ready to take the Finnish supply road.

This road was lightly defended as most of the troops in the area were supply, cooks, and like soldiers. The Soviets took the Finns by surprise and advanced quickly; however, the Soviets were stopped when they found the Finnish cooking tents full of just made sausages.

The Red Army soldiers were starving and had not had hot food for many days, so the fresh cooked Finnish sausage was too large a temptation to resist.

The Soviet attack, which might have won the battle, was stopped in its tracks by the lure of hot food. The Finns were able to regroup and hunted these Soviet troops down along with most of the members of the Red Army breakthrough and killed them in the wooded areas around the roads.

(Taken from Fire and Ice, The Battles).