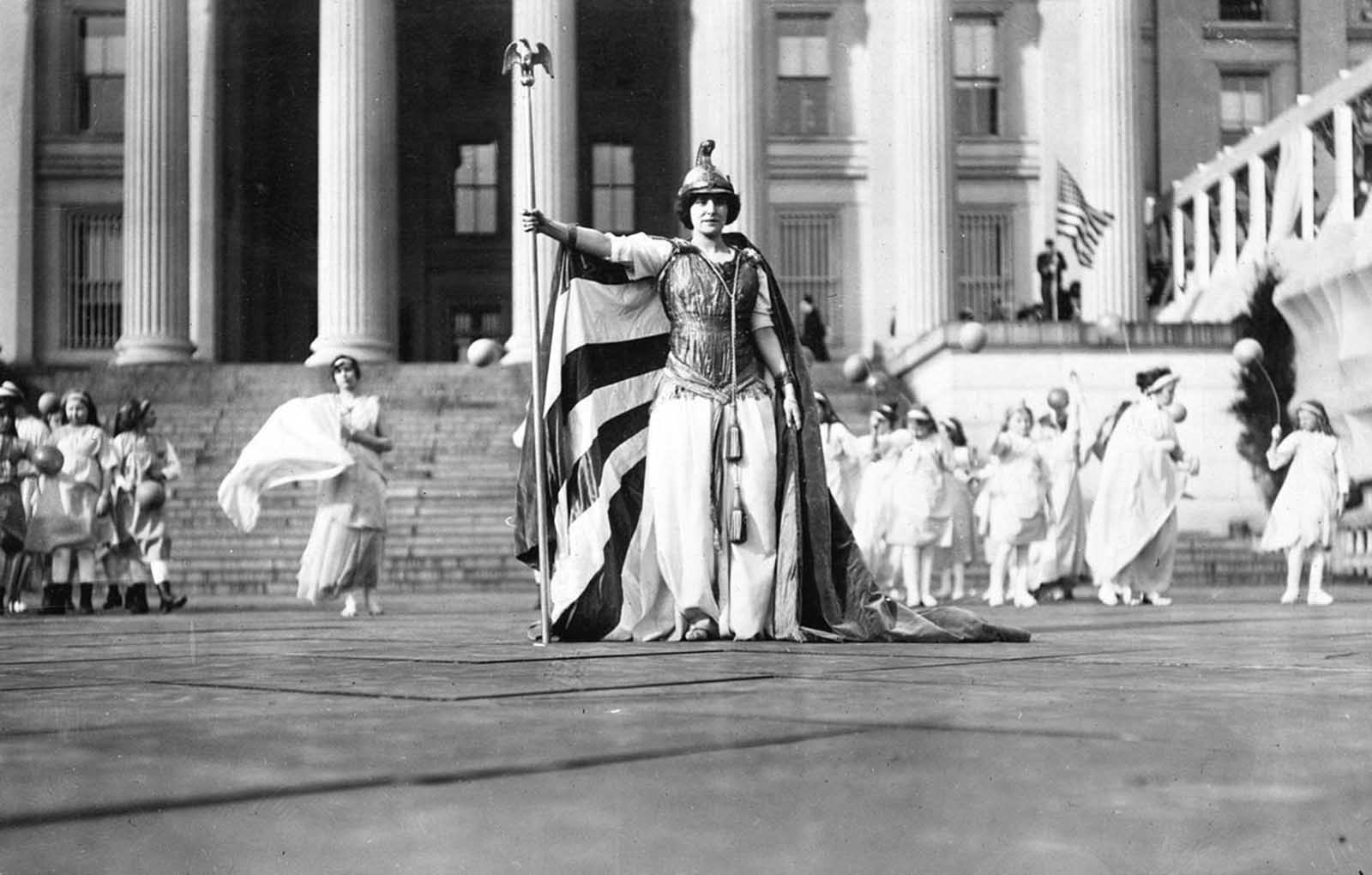 German actress Hedwig Reicher wears the costume of “Columbia” with other suffrage pageant participants standing in background in front of the Treasury Building in Washington, District of Columbia, on March 3, 1913. The performance was part of the larger Suffrage Parade of 1913.

On March 3, 1913, over 5,000 women marched down Pennsylvania Avenue in Washington, D.C. for universal women’s suffrage. The event was scheduled on the day before President Woodrow Wilson’s inauguration to “march in a spirit of protest against the present political organization of society, from which women are excluded,” as the official program stated. The march and the attention that it attracted were monumental in advancing women’s suffrage in the United States.

The event was organized by Alice Paul, who was born in New Jersey and earned an M.A. and Ph.D. from the University of Pennsylvania. She traveled to England and became involved with the suffrage movement.

Upon her return to the United States, she joined the National American Woman Suffrage Association. The Washington parade was her first duty as part of the suffrage association. 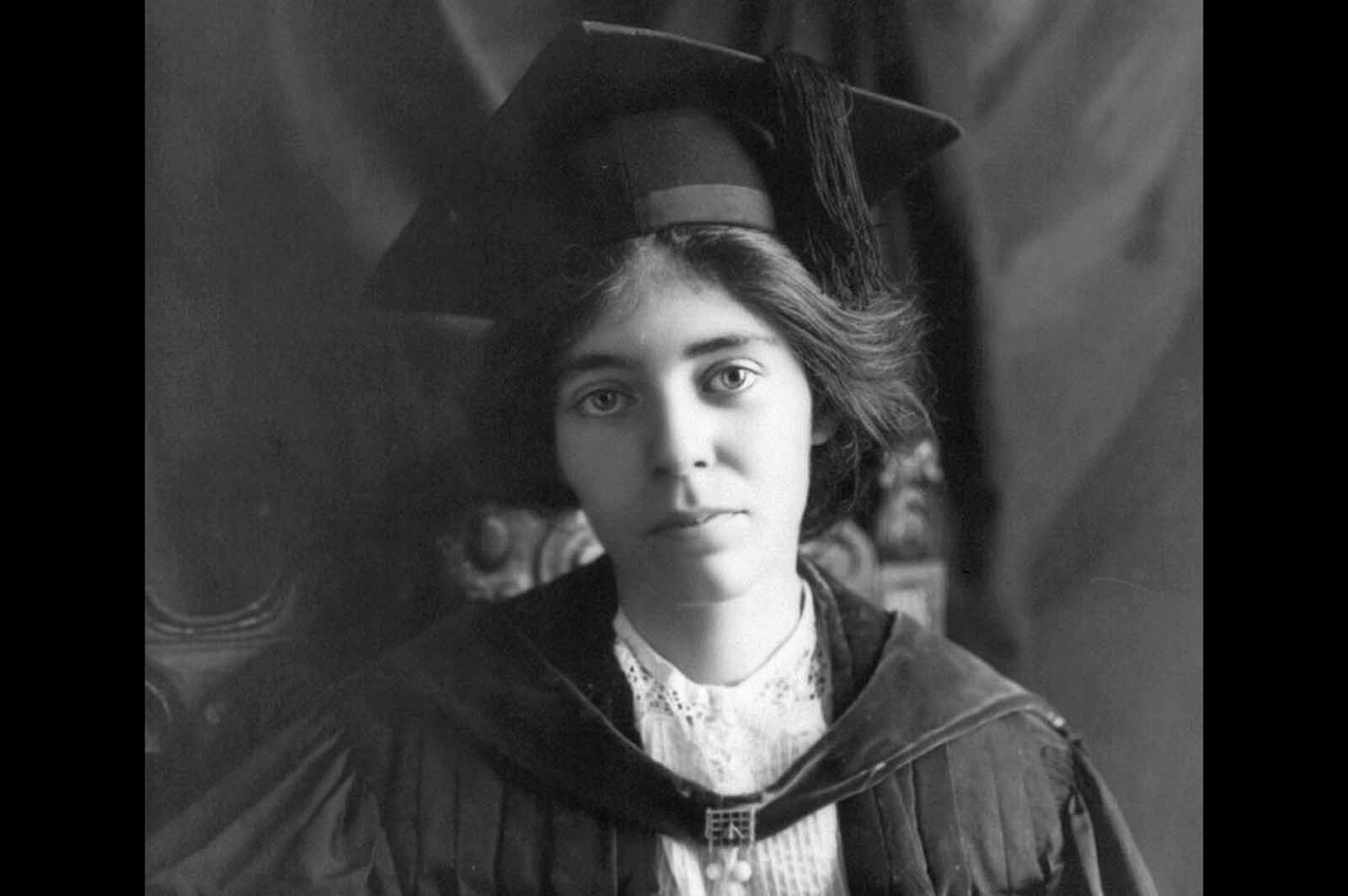 Suffragist Alice Paul, in a 1913 photograph. Paul was born in New Jersey, earned an M.A. and Ph.D. from the University of Pennsylvania, then traveled to England and became friends with members of the women’s suffrage movement there. She soon became very active herself, and, on returning to the United States soon after, joined the National American Woman Suffrage Association (NAWSA). Her first actions as part of NAWSA were to organize a massive parade in Washington, District of Columbia, to promote a new constitutional amendment that would guarantee women’s right to vote in the U.S.

The parade included nine bands, four mounted brigades, 20 floats, and an allegorical performance near the Treasury Building. The marchers were separated into different categories.

Leading the parade, wearing a crown and long white cape on top of a white horse, was labor lawyer Inez Milholland. Women from countries that had already enfranchised women were first, along with officers in the National American Woman Suffrage Association.

The “Pioneers”, women who have been working on suffrage for decades, came after. Celebration of working women followed the Pioneers section and included nurses, farmers, homemakers, doctors, college women, and more. Other sections included the National Association of Colored Women, individual state delegations, and male supporters. 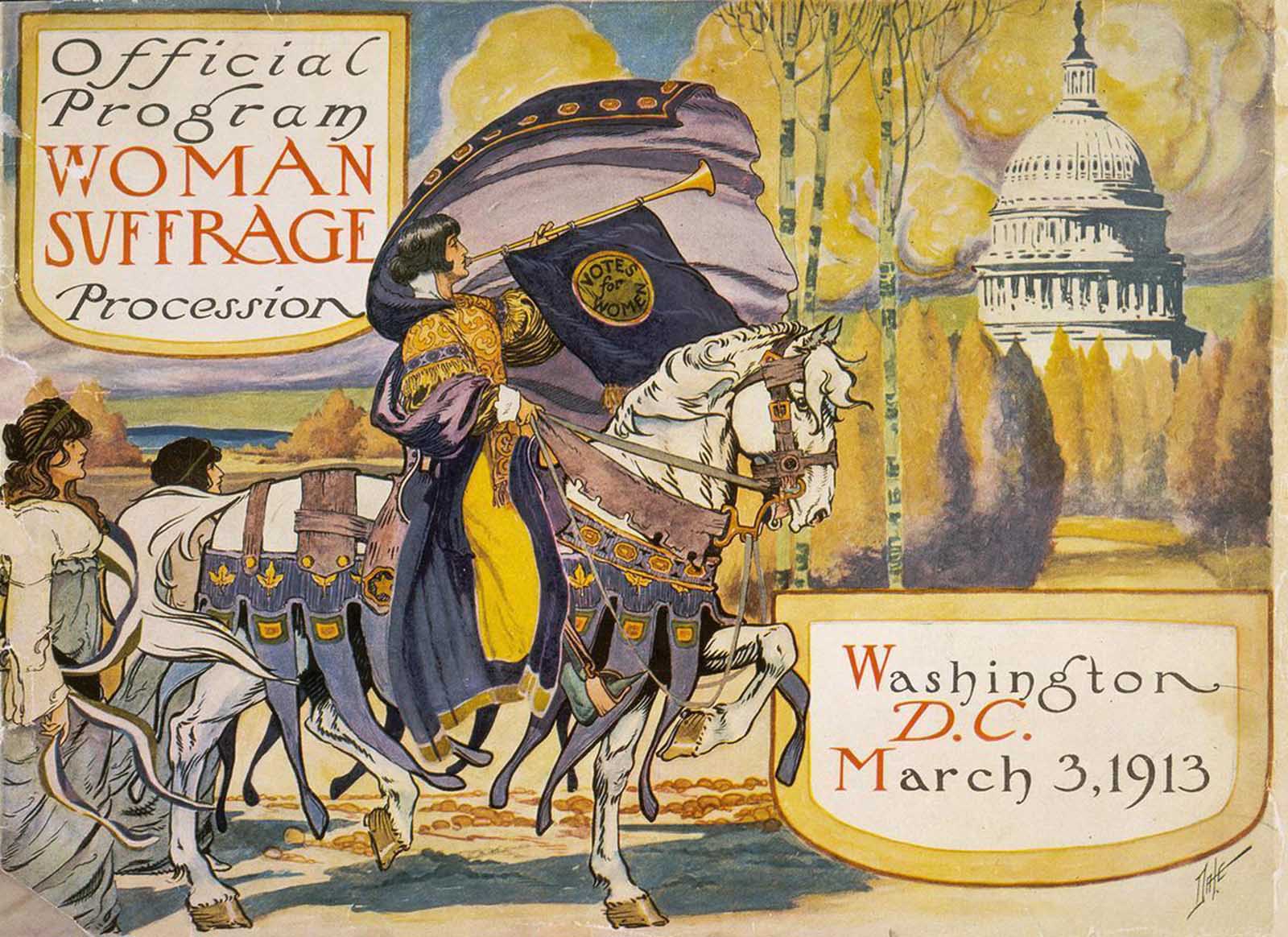 Cover of the program for the 1913 women’s suffrage procession.

The parade began late. There was a very large turnout, in part because many tourists came to see the inauguration the next day. The association was worried that the police were going to underestimate the parade’s audience and not make preparations.

Committee member Mrs. John Rogers went to see her brother-in-law the night before about crowd issues. He just happened to be Henry L. Stimson, the Secretary of War. Secretary Stimson promised to send over the cavalry from Fort Myer if trouble should arise.

The parade appeared to have a good start; however, Pennsylvania Avenue soon became choked with thousands of spectators. At the same time a few blocks away, president-elect Wilson arrived at the railway station to very little fanfare. When they asked where everyone was, they were told everyone was “watching the suffrage parade.”

Mostly men, the spectators began to jostle and hurl insults at the parade members. With massive crowds, the parade could barely get past. Some women were tripped and assaulted while the police did little to stop it. 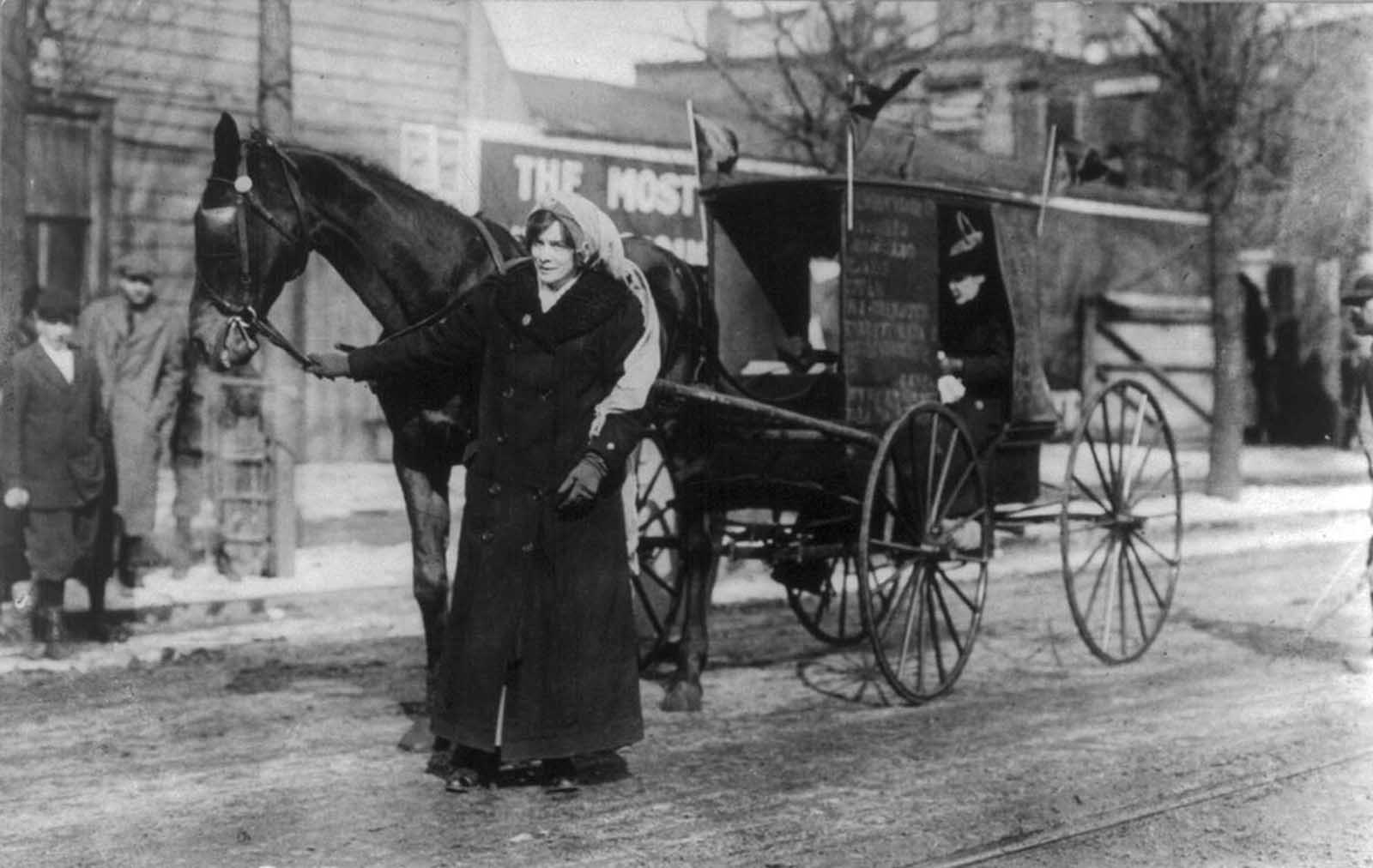 Elizabeth Freeman of the New York State Suffrage Association, with horse and carriage, on her way to join the March 3, 1913 suffrage march in Washington, District of Columbia.

One policeman even told some women that they should have stayed home where they belonged. Over one hundred marchers were hospitalized due to the injuries they received from the crowds.

It took six hours to go from the Capitol to Constitution Hall. Finally, Secretary Stimson was called and quickly sent over the troops to clear the way for the parade.

It was reported that Helen Keller “was so exhausted and unnerved by the experience in attempting to reach a grandstand…that she was unable to speak later at Continental hall [sic].” The majority of the women finished the parade and the event continued as scheduled. 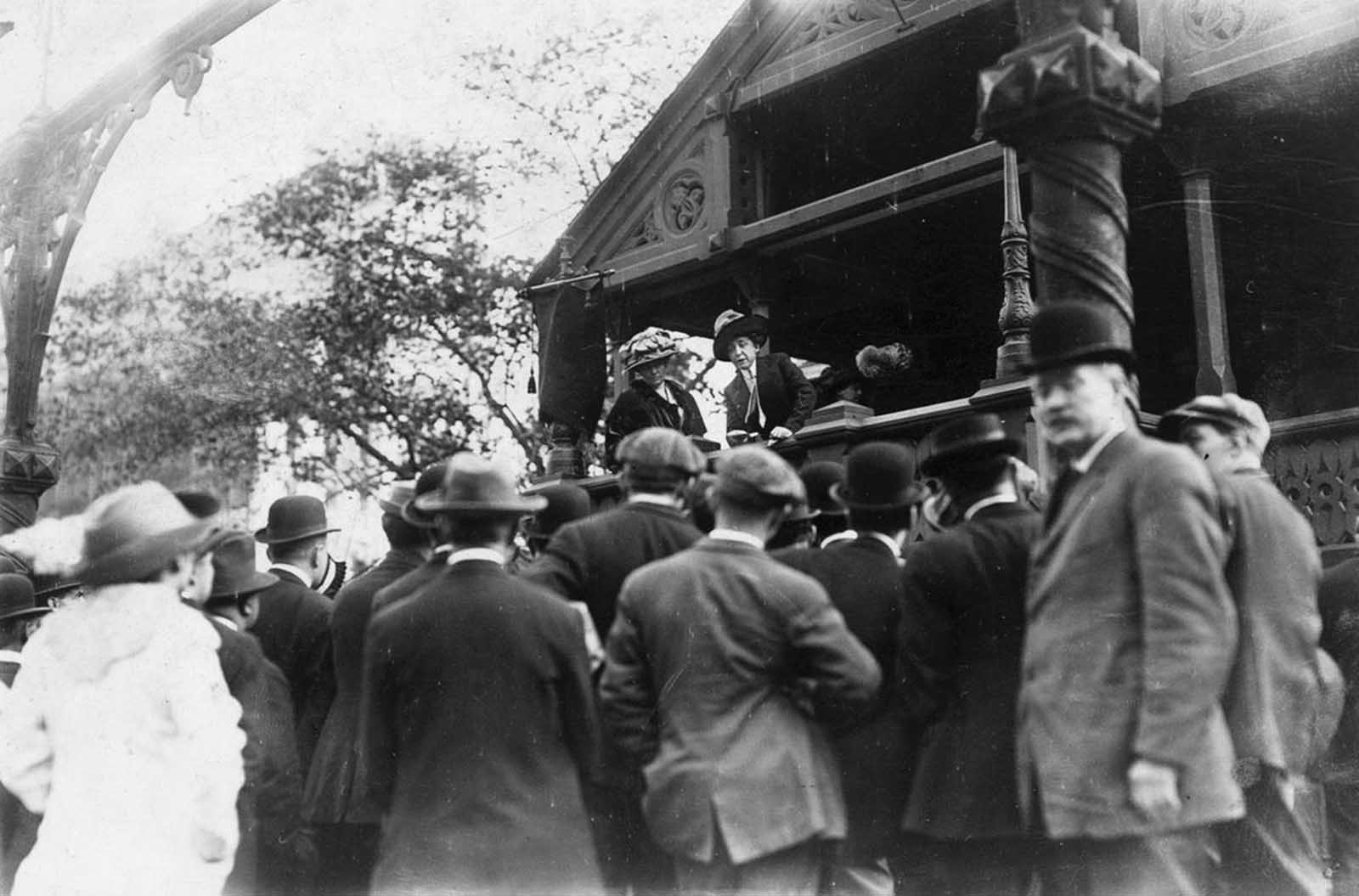 Mrs. E.R. Smith practicing speechmaking from a covered platform before a small crowd, a ‘school for suffragette speakers’ in Union Square.

The mistreatment of the marchers by the crowd and the police caused a great furor. Alice Paul shaped the public response after the parade, portraying the incident as symbolic of systemic government mistreatment of women, stemming from their lack of a voice and political influence through the vote.

She claimed the incident showed that the government’s role in women’s lives had broken down, and that it was incapable of even providing women with physical safety.

Journalist Nellie Bly, who had participated in the march, headlined her article “Suffragists are Men’s Superiors”. Senate hearings, held by a subcommittee of the Committee on the District of Columbia, started on March 6, only three days after the march, and lasted until March 17, with the result that the District’s superintendent of police was replaced.

NAWSA praised the parade and Paul’s work on it, saying “the whole movement in the country has been wonderfully furthered by the series of important events which have taken place in Washington, beginning with the great parade the day before the inauguration of the president”. 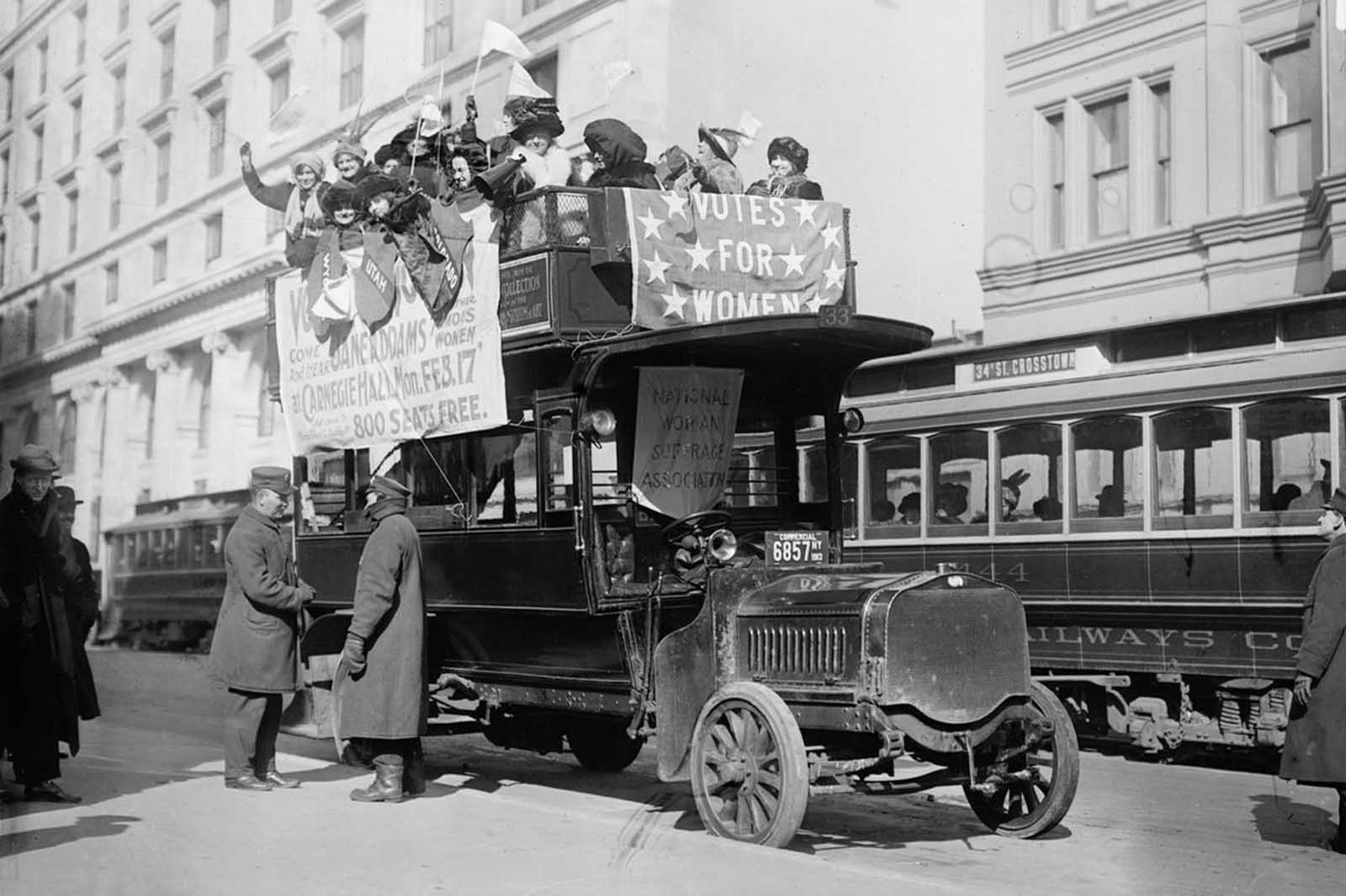 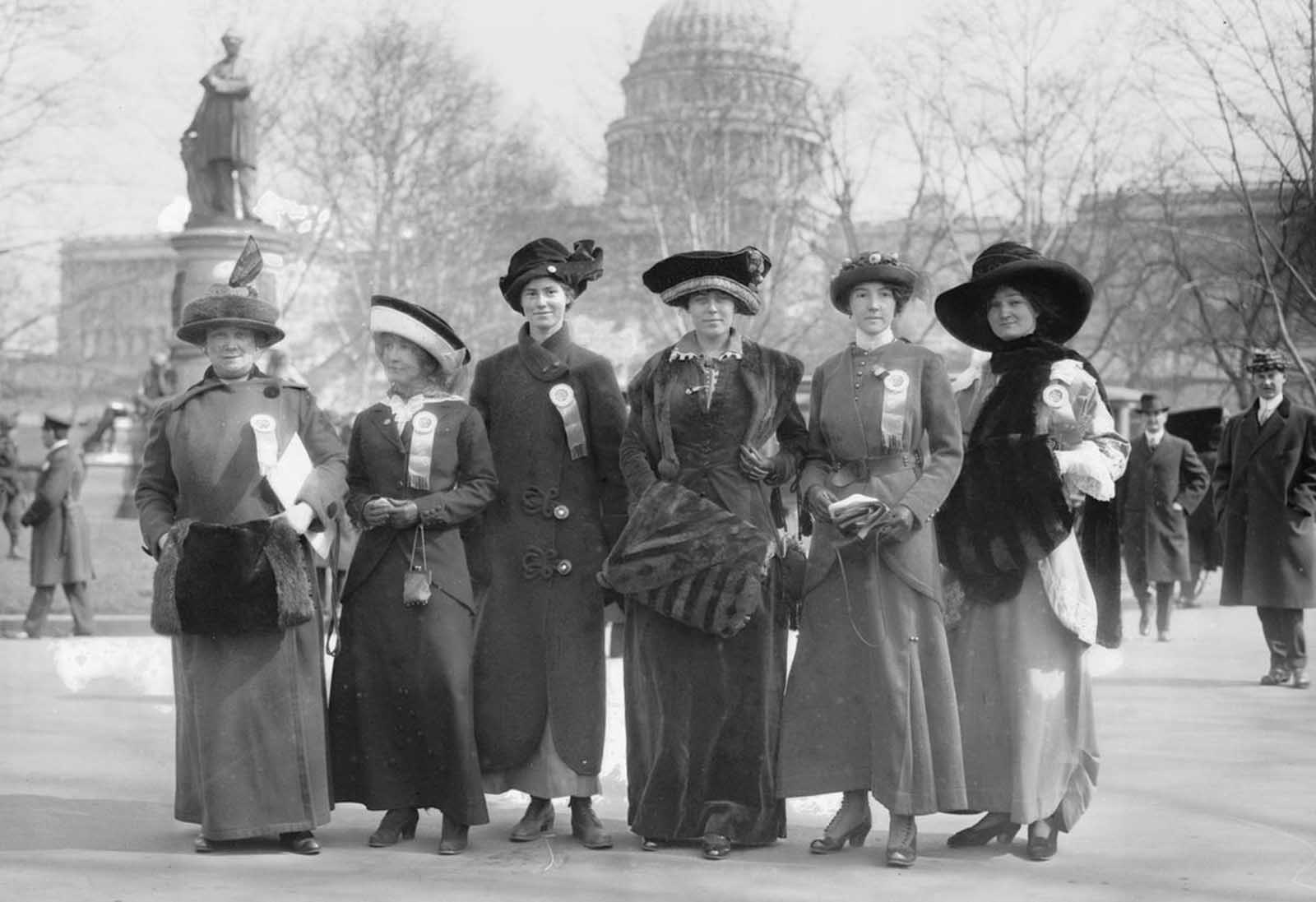 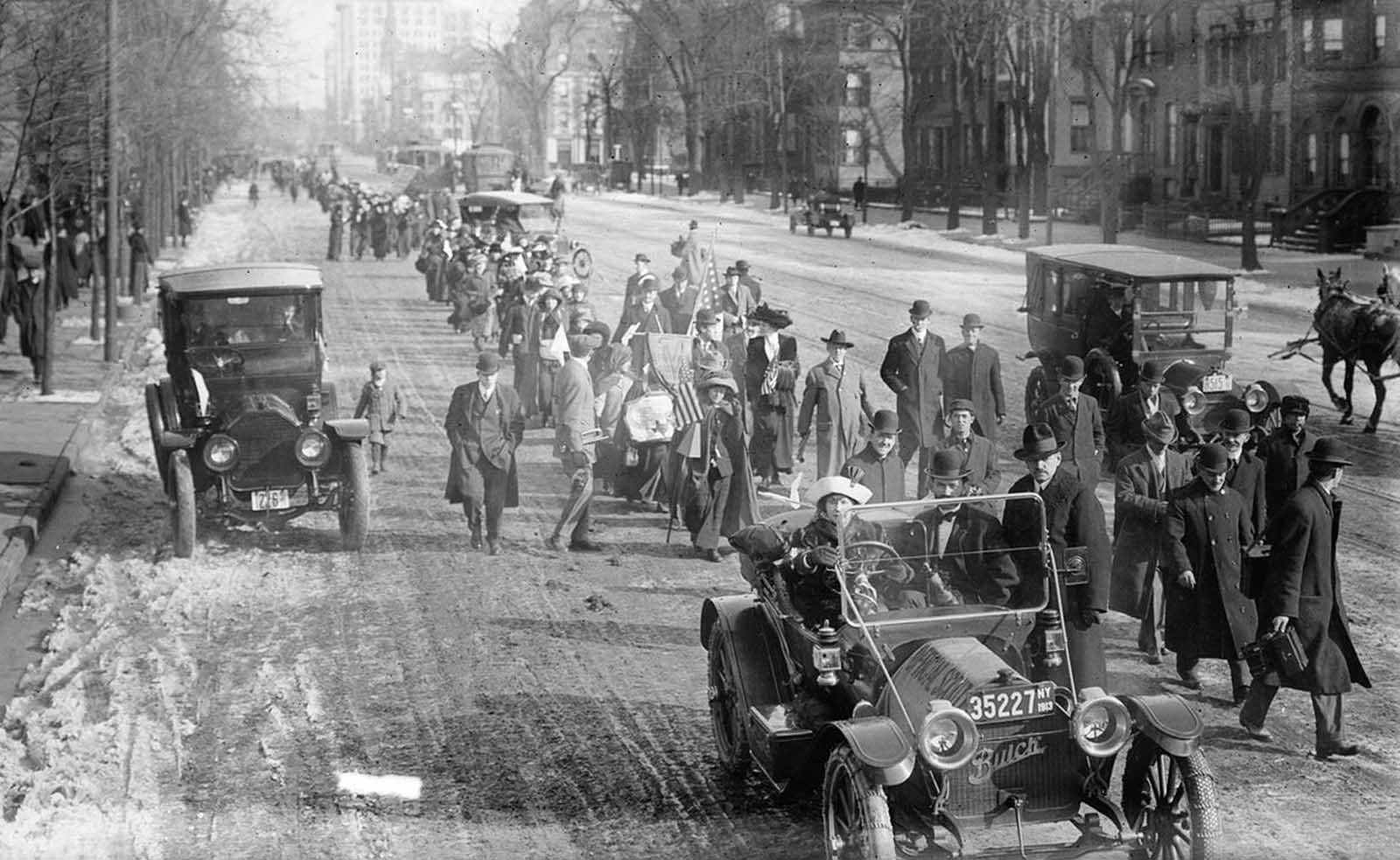 The hike lead by “General” Rosalie Jones from New York to Washington, District of Columbia, for the March 3, 1913 Suffrage parade. Photo taken in Newark, New Jersey on Broad Street, just north of West Kinney Street, on February 12, 1913. Rosalie Jones is walking behind the first car. 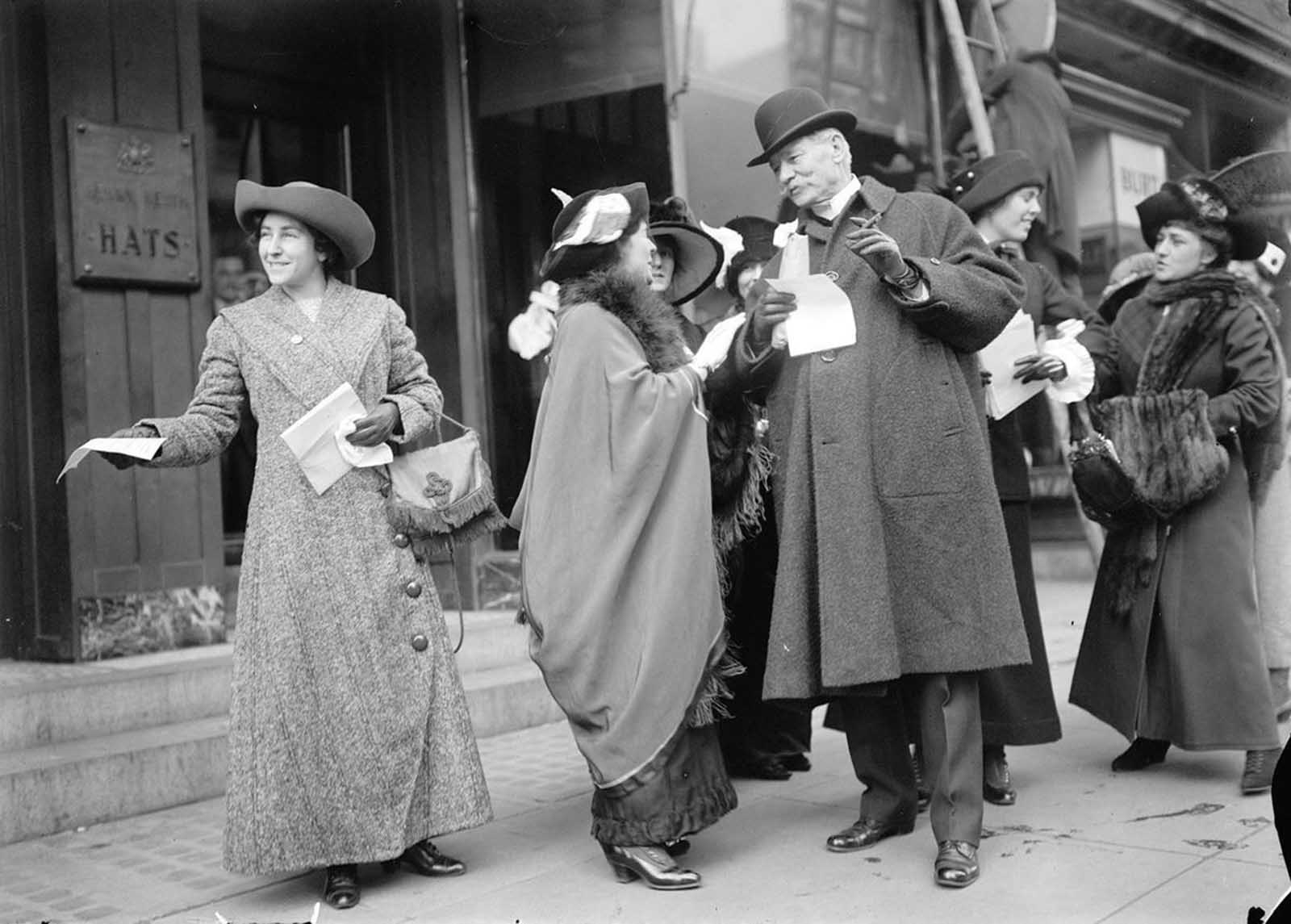 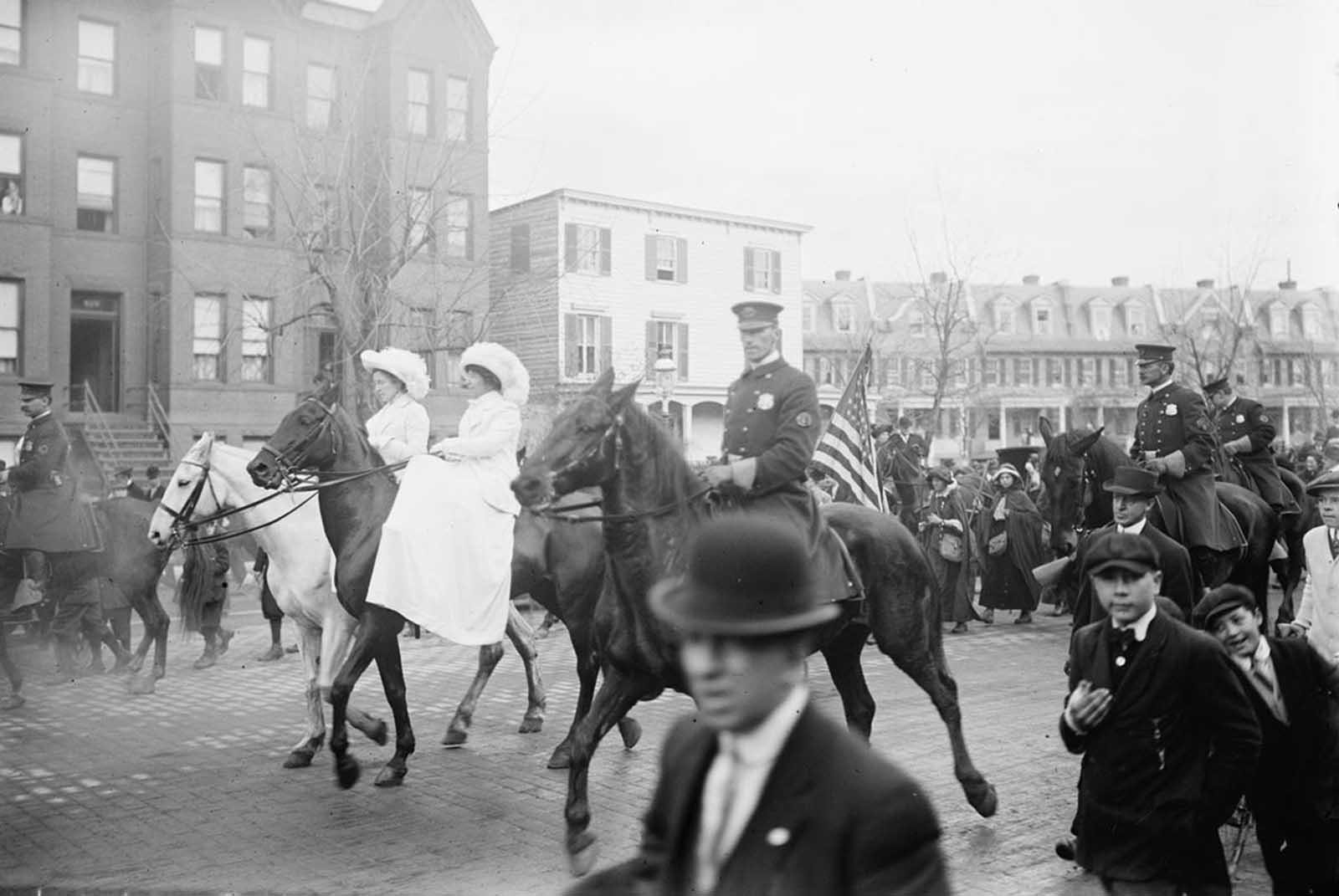 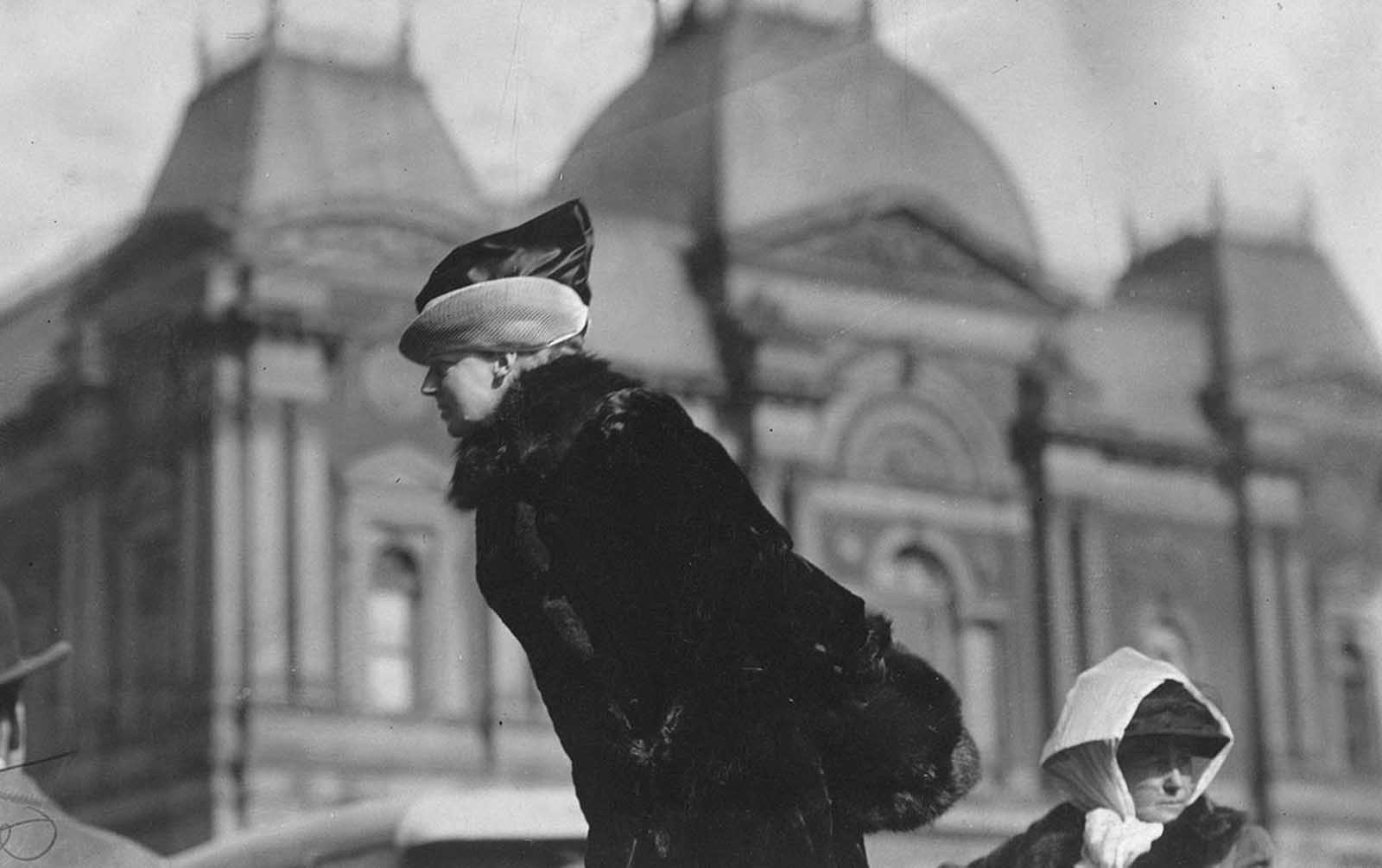 At an open air meeting in Washington, District of Columbia, in March of 1913, calling upon Congress to pass the national woman suffrage amendment. This photograph shows Mrs. John Rogers, sister-in-law of former Secretary of War, and a member of the Advisory Council of the Congressional Union for Women Suffrage, speaking in front of old Corcoran Art Gallery. 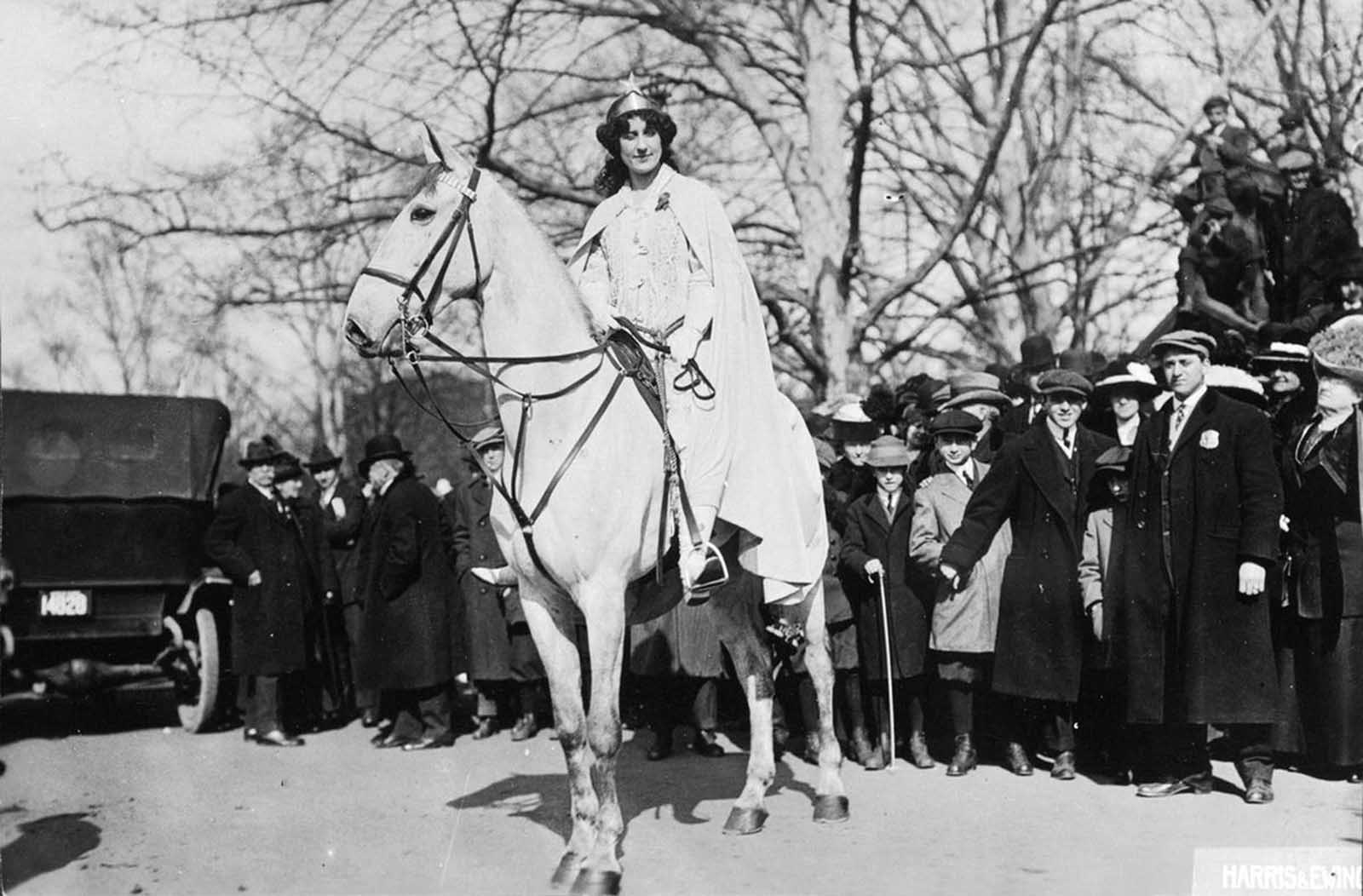 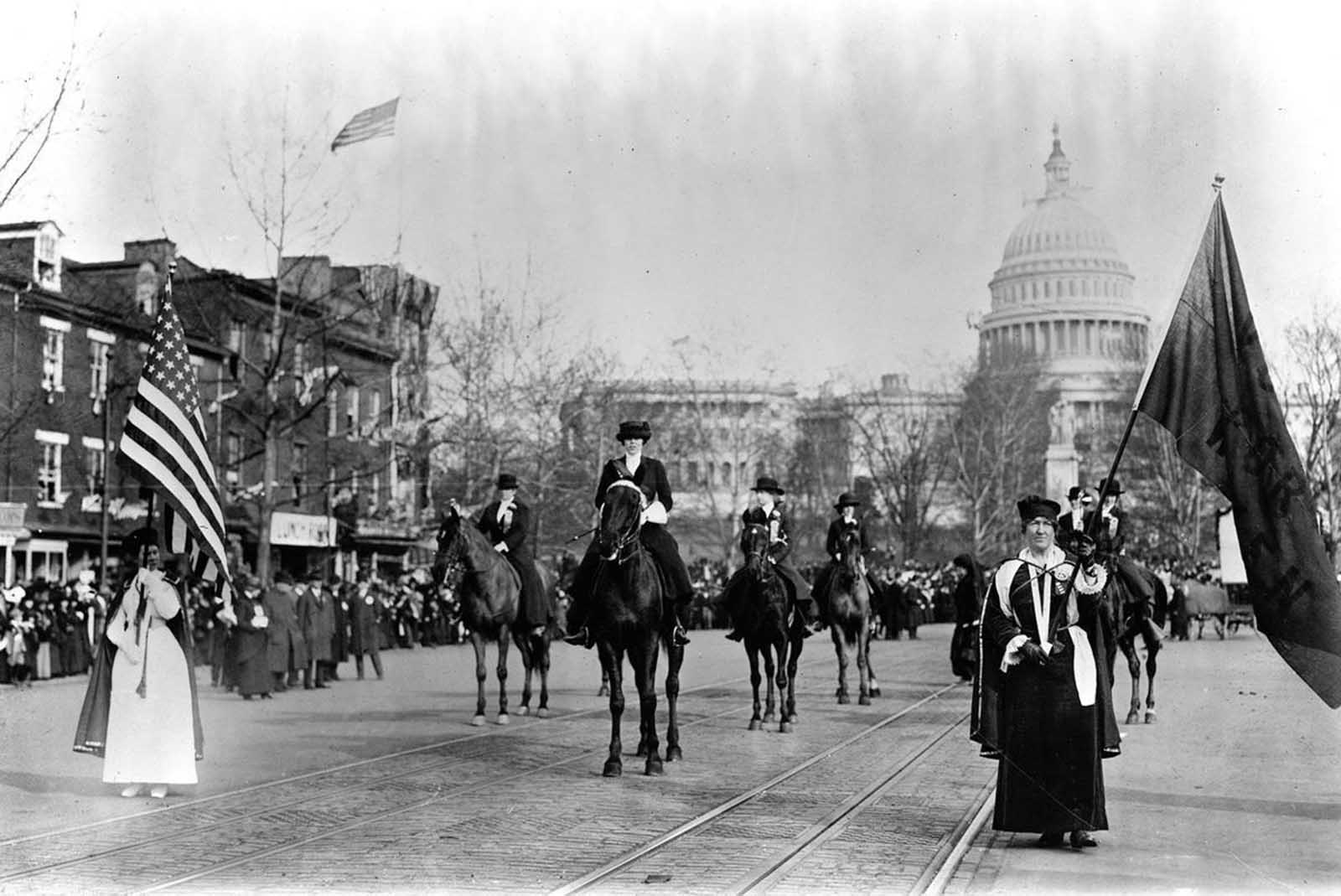 Women suffragists at the head of the parade, marching down Pennsylvania Avenue, with the U.S. Capitol in background, on March 3, 1913. 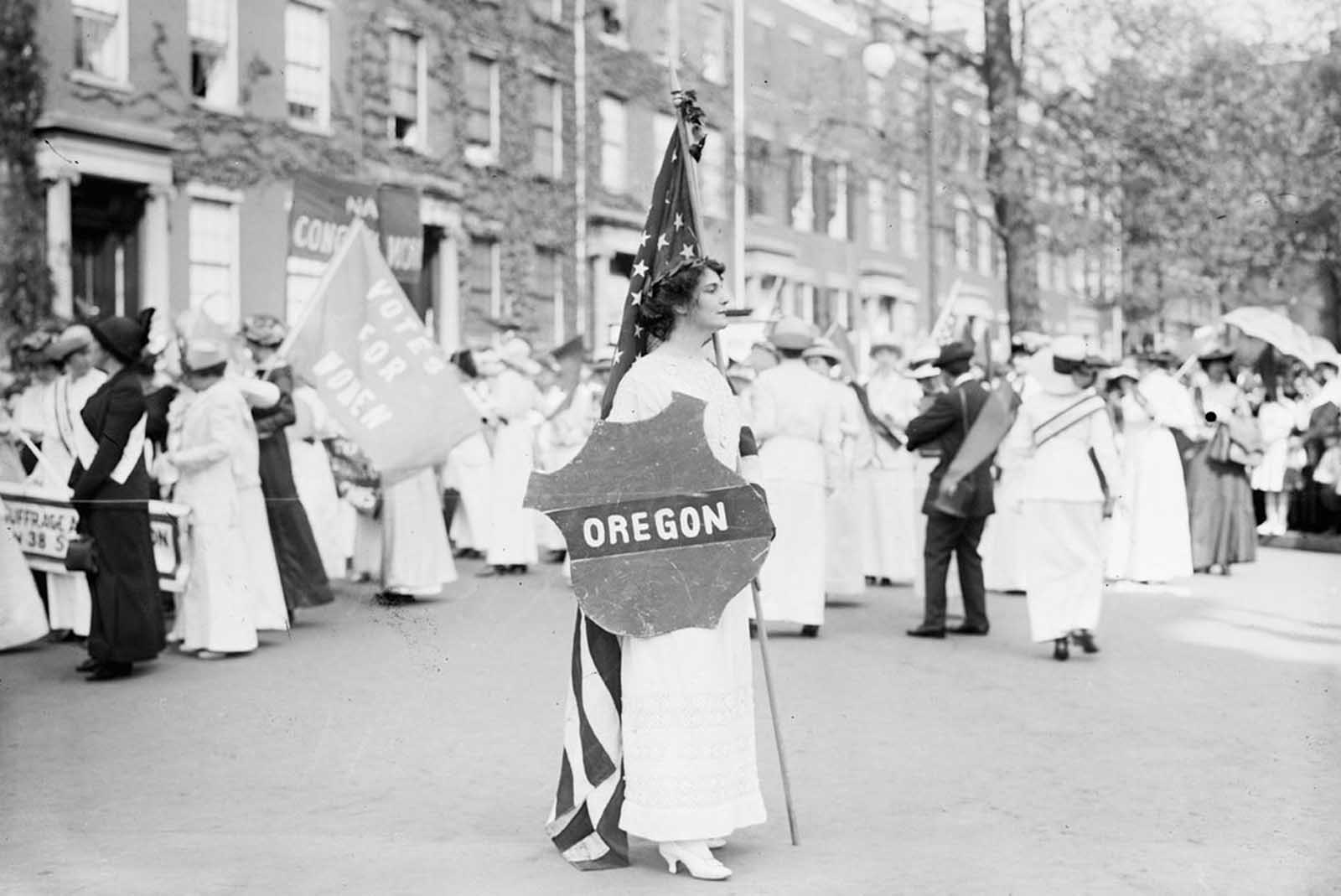 Actress Margaret Vale Howe, a participant in the suffrage parade in Washington, District of Columbia, in March of 1913. 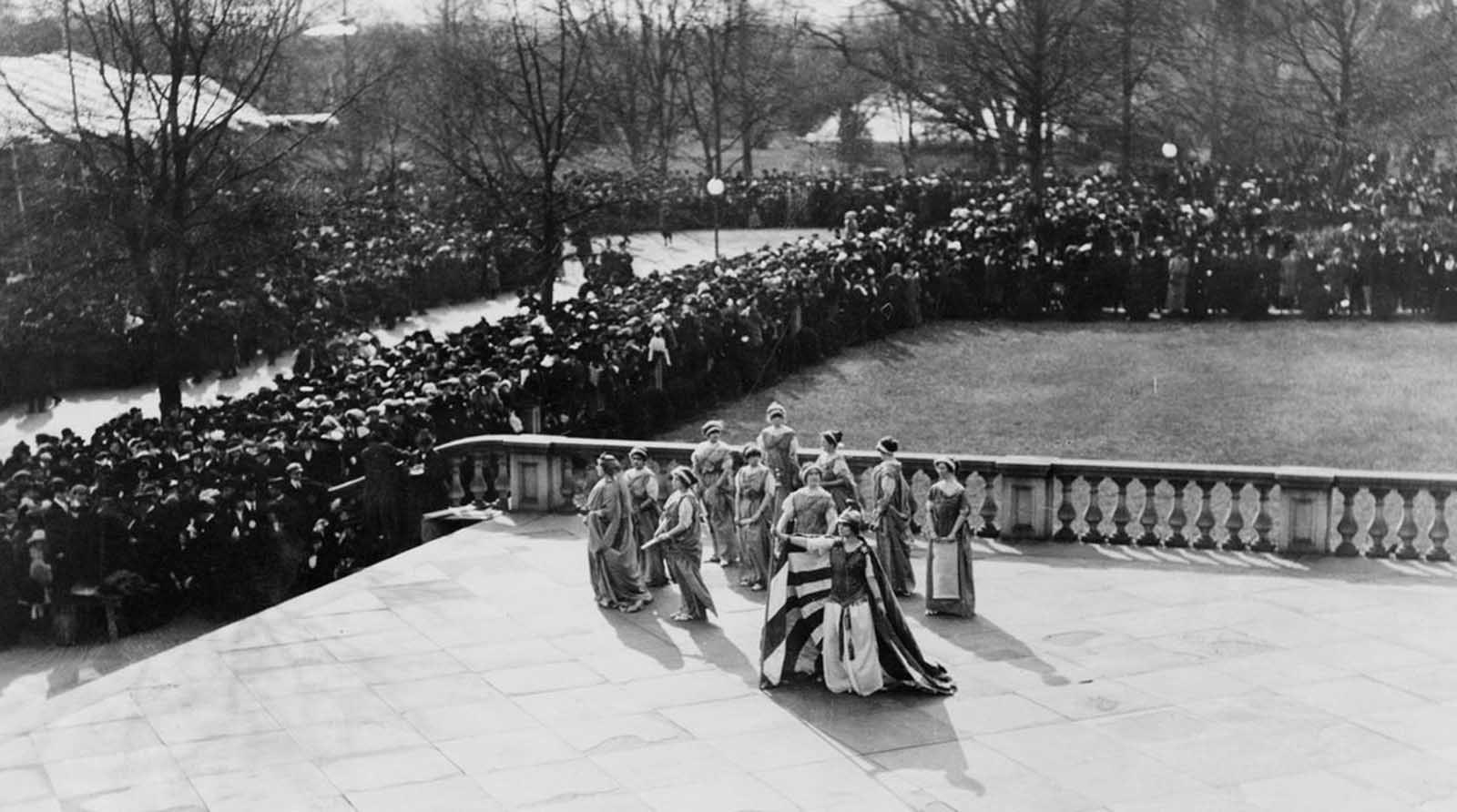 Tableau presented by the Women’s Suffrage Association, on the U.S. Treasury building steps, on March 3, 1913. 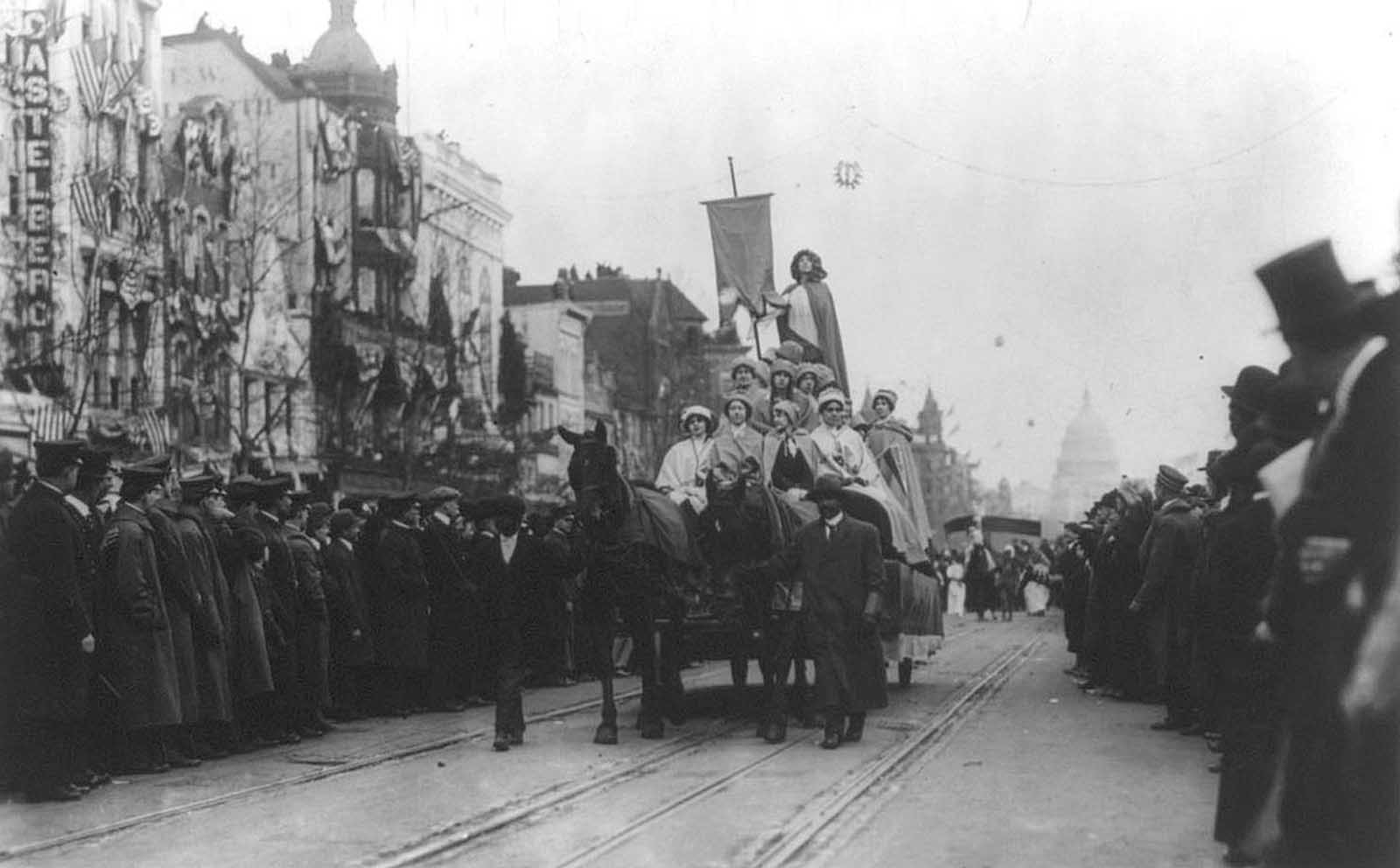 Spectators crowd in on the passing Suffrage Parade on Pennsylvania Avenue, on March 3, 1913. 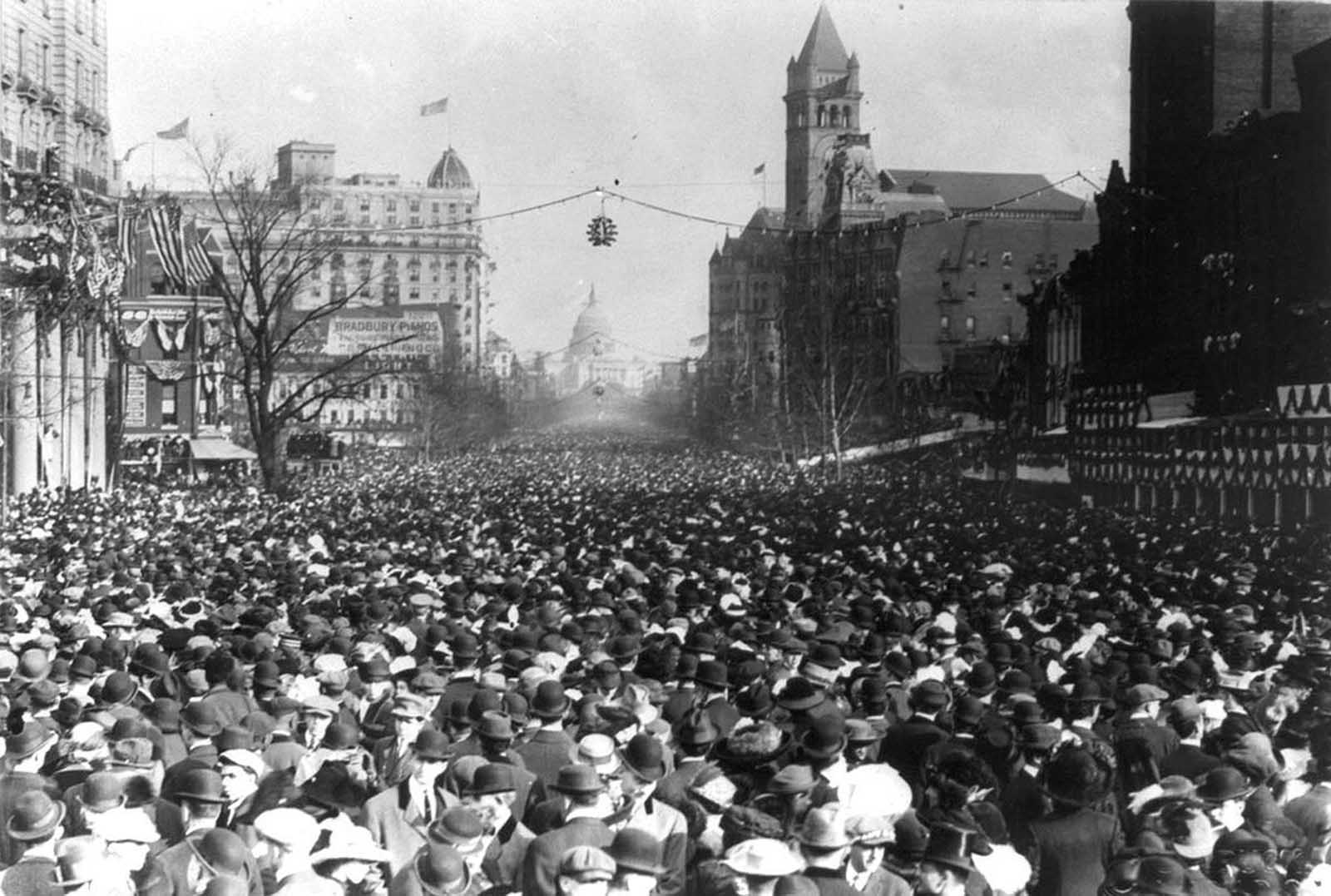 Pennsylvania Avenue, completely choked with spectators during the Suffrage Parade, on March 3, 1913. 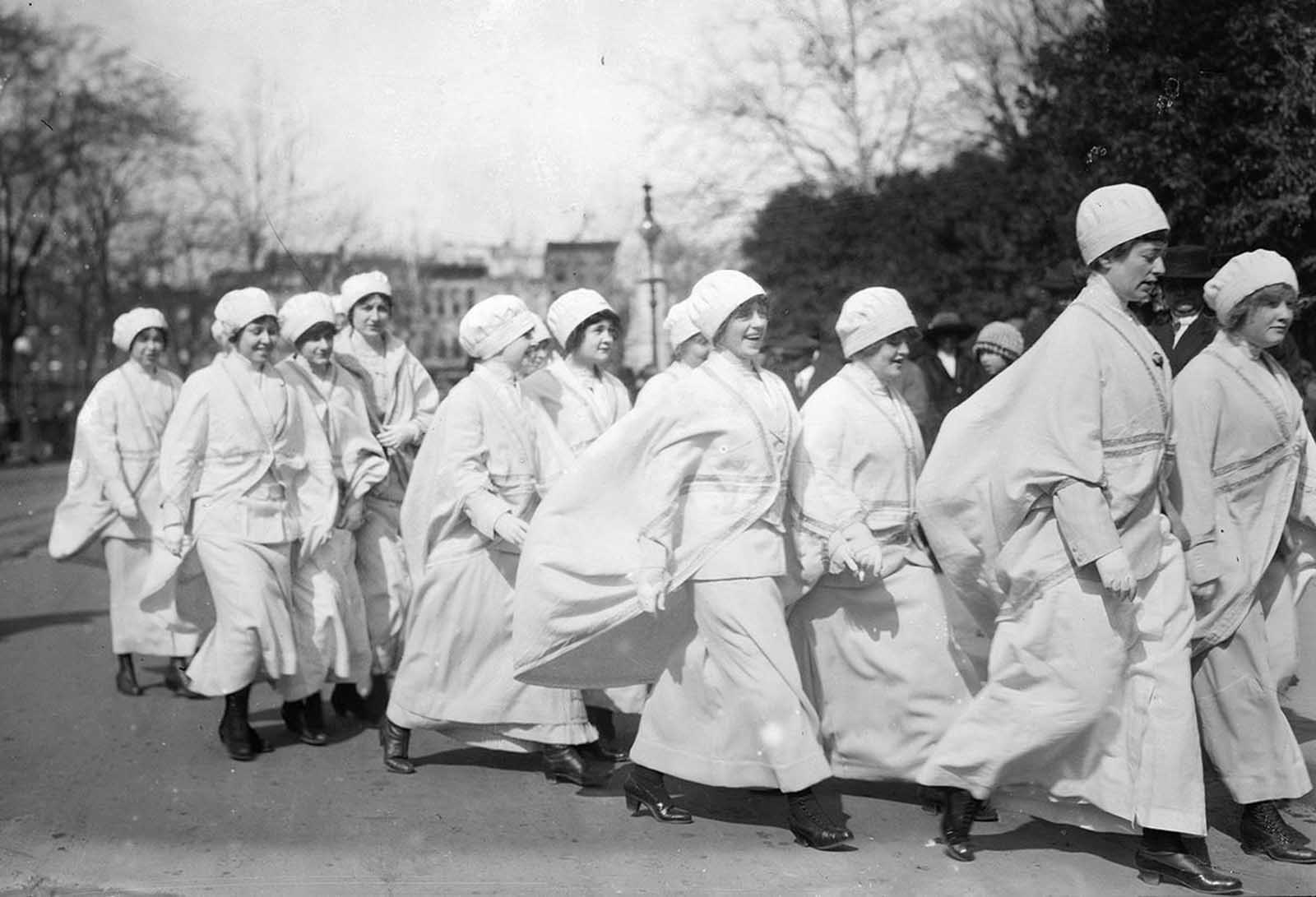 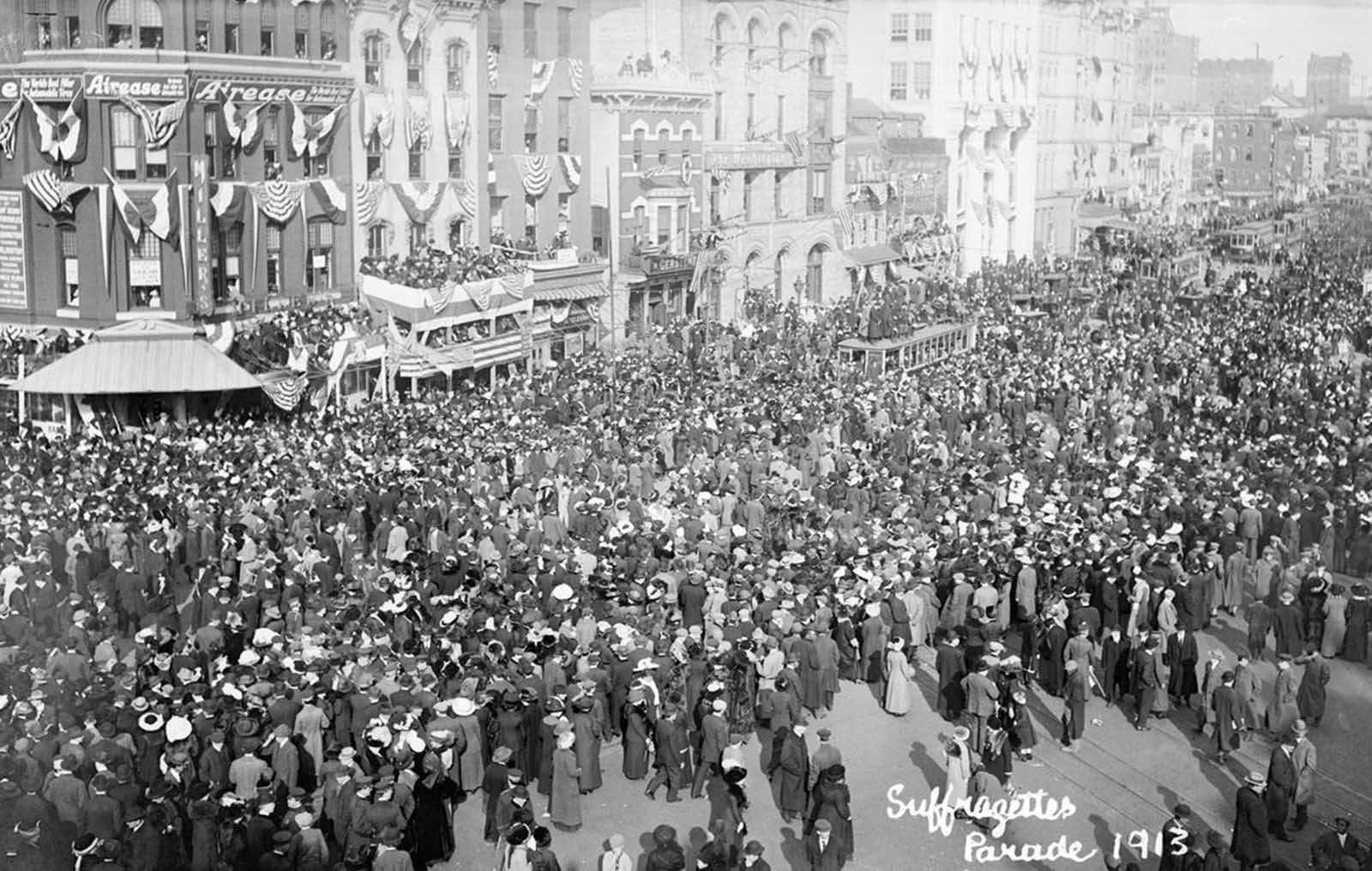 Crowds press in on the parade route in Washington, District of Columbia, on March 3, 1913. The stands and bunting were in place for the Inauguration of President Woodrow Wilson, scheduled for the following day. 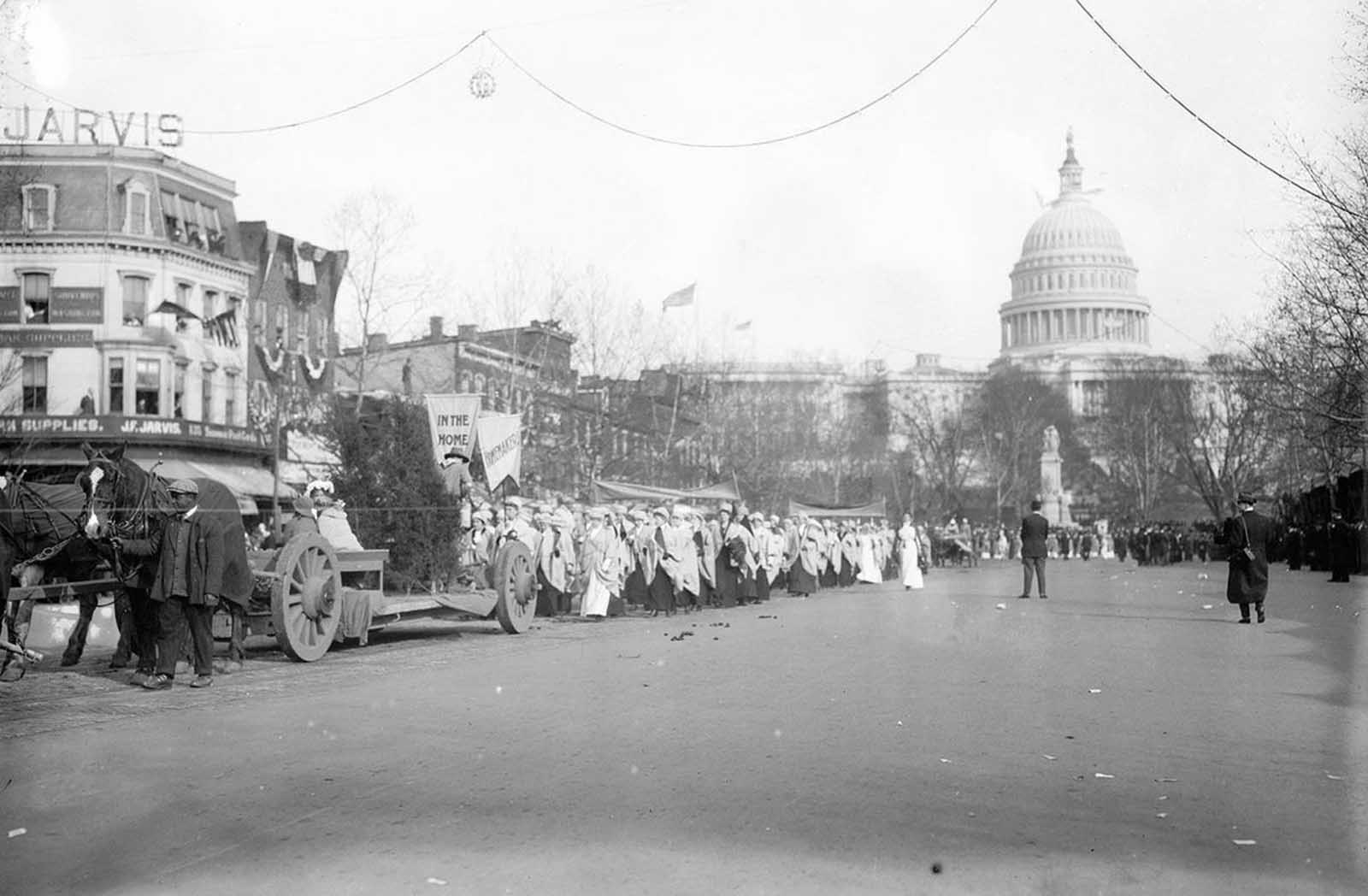 Part of the 1913 Suffrage Parade. The signs read “In The Home”, and “Homemakers”. 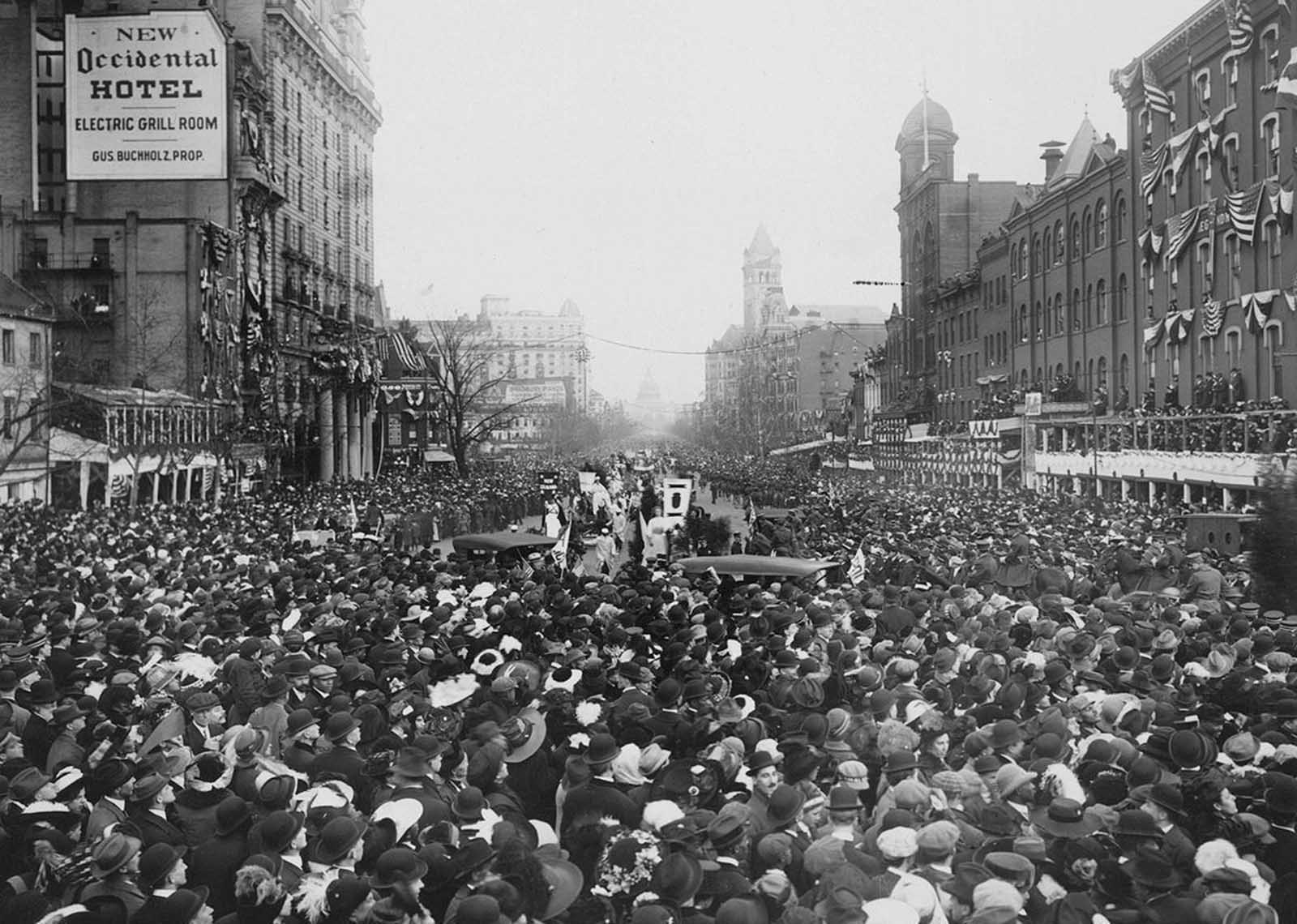 The crowd converges on marchers, blocking the parade route during March 3, 1913, suffrage procession, in Washington, District of Columbia. 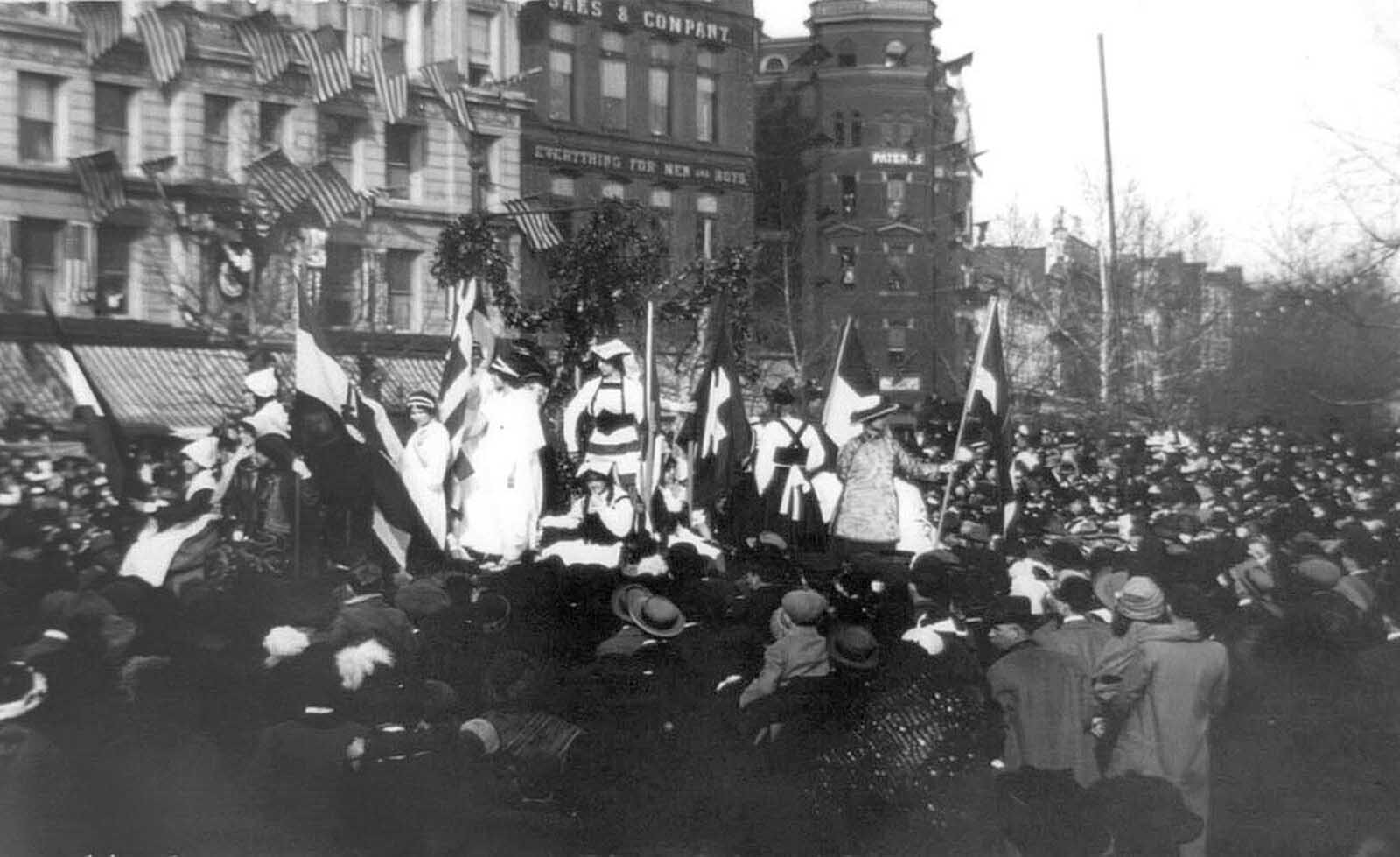 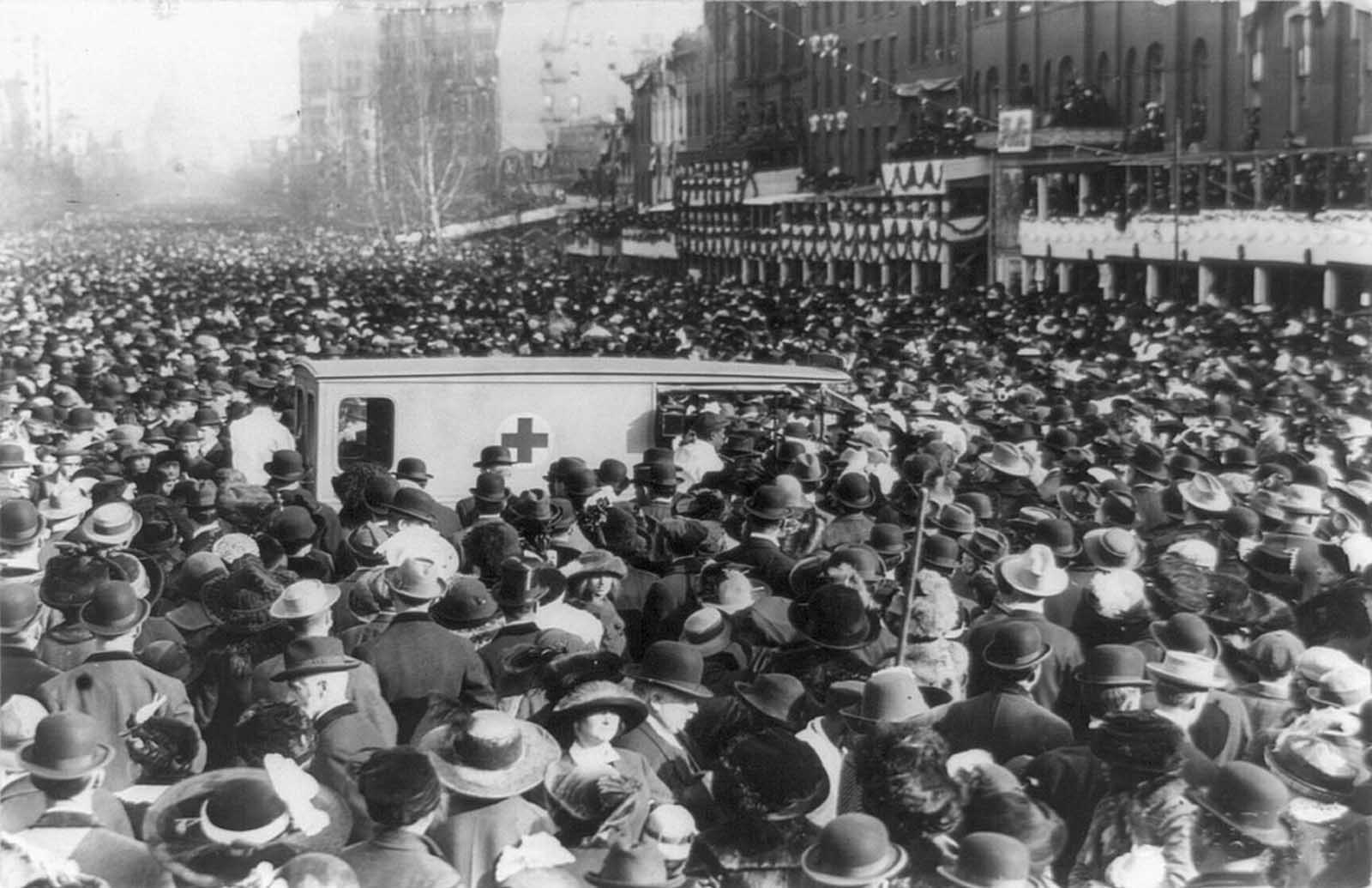 The crowd surrounds and slows a Red Cross ambulance during the Women’s suffrage procession, on March 3, 1913. Dozens of marchers were injured during the march, shoved and tripped by spectators. 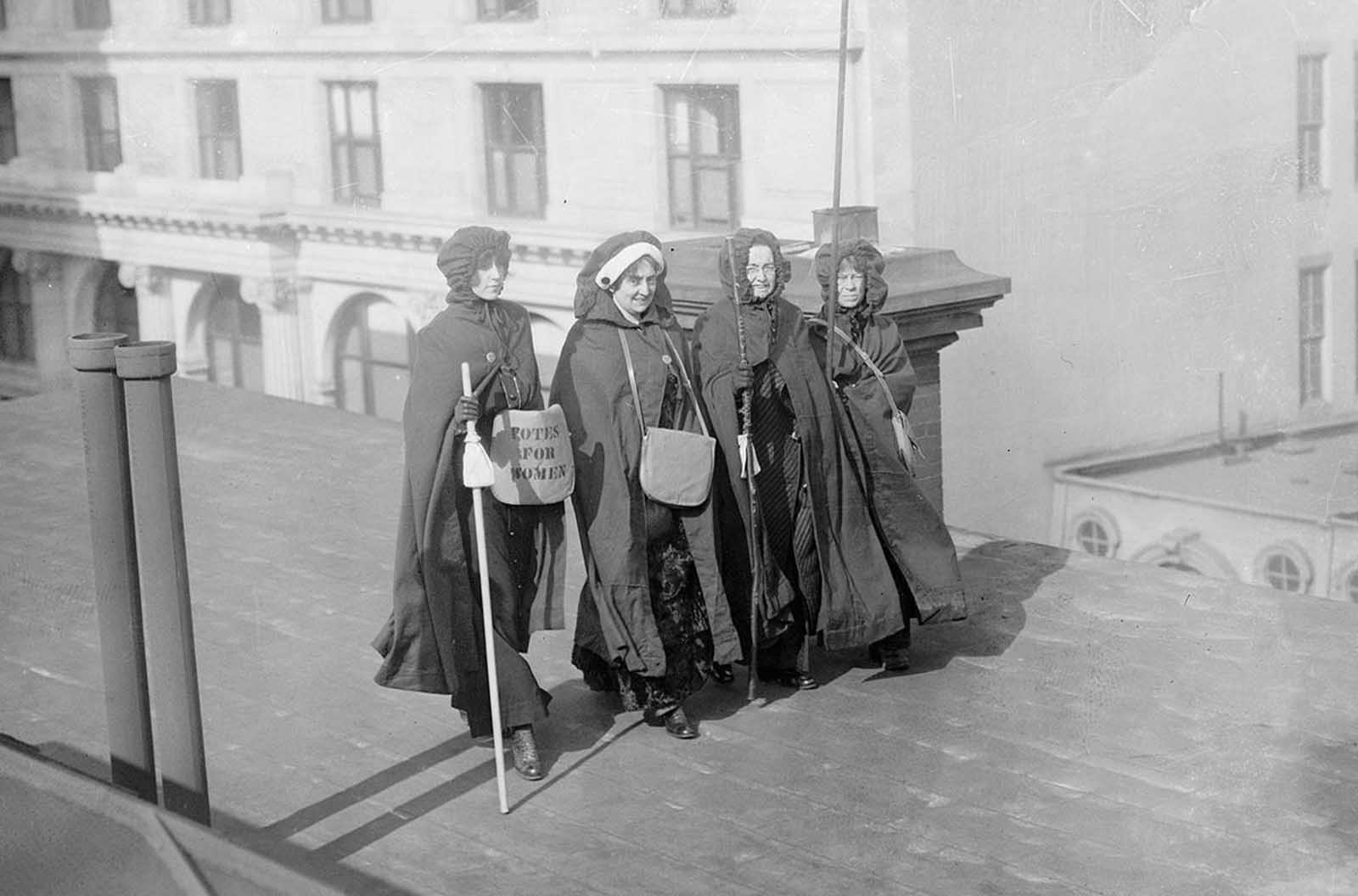 After the Parade: Mrs. John Boldt, Mrs. May Morgan, Miss Dock, and Miss Craft, suffrage hikers who took part in the suffrage hike from New York City to Washington, District of Columbia, as well as the parade itself, on March 3, 1913.