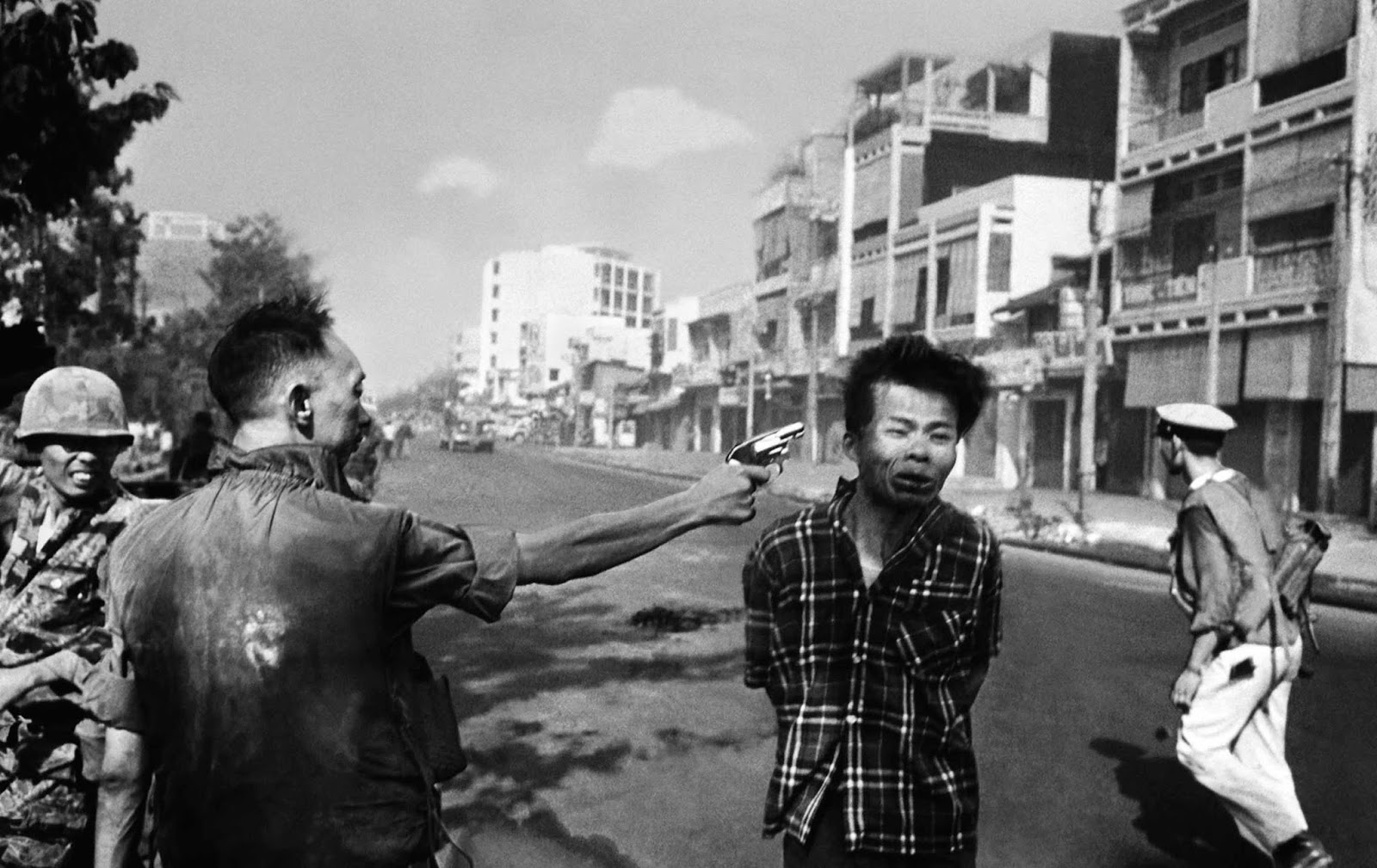 After Nguyen Ngoc Loan raised his sidearm and shot Vietcong operative Nguyen Van Lem in the head he walked over to the reporters and told them that: “These guys kill a lot of our people, and I think Buddha will forgive me”.

Captured on NBC TV cameras and by AP photographer Eddie Adams, the picture and film footage flashed around the world and quickly became a symbol of the Vietnam War’s brutality.

Eddie Adams’ picture was especially striking, as the moment frozen is one almost at the instant of death. Taken a split second after the trigger was pulled, Lem’s final expression is one of pain as the bullet rips through his head. A closer look at the photo actually reveals the bullet exiting his skull. The gif from the execution (graphic images!).

“Still photographs are the most powerful weapon in the world”, AP photojournalist Eddie Adams once wrote. A fitting quote for Adams, because his 1968 photograph of an officer shooting a handcuffed prisoner in the head at point-blank range not only earned him a Pulitzer Prize in 1969 but also went a long way toward souring Americans’ attitudes about the Vietnam War.

For all the image’s political impact, though, the situation wasn’t as black-and-white as it’s rendered. What Adams’ photograph doesn’t reveal is that the man being shot (named Nguyen Van Lem) was the captain of a Vietcong “revenge squad” that had executed dozens of unarmed civilians earlier the same day.

Regardless, it instantly became an icon of the war’s savagery and made the official pulling the trigger – General Nguyen Ngoc Loan – its iconic villain.

Vietcong officer Nguyen Van Lem minutes prior to his execution.

South Vietnamese sources said that Lém commanded a Vietcong death squad, which on that day had targeted South Vietnamese National Police officers, or in their stead, the police officers’ families. Corroborating this, Lém was captured at the site of a mass grave that included the bodies of at least seven police family members.

Photographer Adams confirmed the South Vietnamese account, although he was only present for the execution. Lém was brought to Loan who questioned him briefly then using his personal .38 revolver, executed Lém with a single shot in the head.

Two people died in that photograph: the recipient of the bullet and General Nguyen Ngoc Loan. The general killed the Viet Cong; I killed the general with my camera. Still, photographs are the most powerful weapons in the world. People believe them; but photographs do lie, even without manipulation. They are only half-truths…

What the photograph didn’t say was, ‘What would you do if you were the general at that time and place on that hot day, and you caught the so-called bad guy after he blew away one, two, or three American people?’…

This picture really messed up his life. He never blamed me. He told me if I hadn’t taken the picture, someone else would have, but I’ve felt bad for him and his family for a long time… I sent flowers when I heard that he had died and wrote, “I’m sorry. There are tears in my eyes”.

What happened to General Nguyen Ngoc Loan after the war?

Sadly, the photograph’s legacy would haunt Loan for the rest of his life. A few months after the execution picture was taken, Loan was seriously wounded by machine-gun fire that led to the amputation of his leg.

Following the war, he was reviled wherever he went. After an Australian hospital refused to treat him, he was transferred to the United States, where he was met with a massive (though unsuccessful) campaign to deport him.

He opened a pizza restaurant in the Washington, D.C. suburb of Burke, Virginia at Rolling Valley Mall called “Les Trois Continents”. In 1991, he was forced into retirement when he was recognized and his identity publicly disclosed.

Photographer Eddie Adams recalled that on his last visit to the pizza parlor, he had seen written on a toilet wall, “We know who you are, fucker”. Nguyen Ngọc Loan died of cancer on 14 July 1998, aged 67, in Burke, Virginia.

Did Loan’s action violate the Geneva Conventions for treatment of prisoners of war?

He executed the partisan after he had stumbled upon the bodies of his men and even their families that were killed by the Vietcong. The Vietcong were indiscriminately killing people. Summary execution of partisans is allowable under Geneva.

According to Article 4 of the Third Geneva Convention of 1949, irregular forces are entitled to prisoner of war status provided that they are commanded by a person responsible for his subordinates, have a fixed distinctive sign recognizable at a distance, carry arms openly, and conduct their operations in accordance with the laws and customs of war.

However, if soldiers remove their disguises and put on proper insignia before the start of combat in such an operation, they are considered legal combatants and must be treated as prisoners of war if captured.

This distinction was settled in the post-WWII trial of Otto Skorzeny, who led Operation Greif, an infiltration mission in which German commandos wore US uniforms to infiltrate US lines but removed them before actual combat.