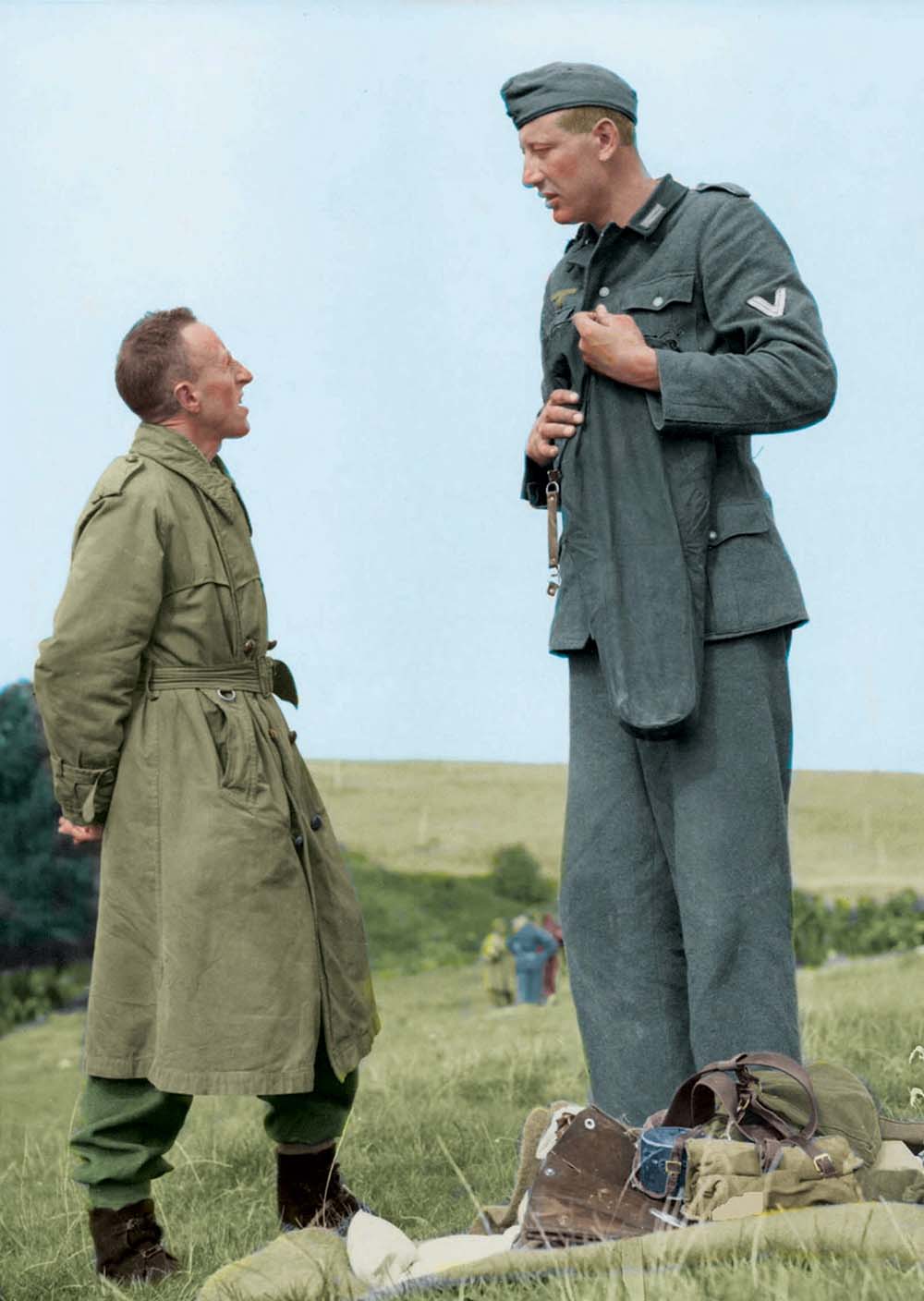 7’3” Jakob Nacken (221 cm), the tallest German soldier of WW2, chatting with 5’7” (170 cm) Eddie Worth, AP photographer with the wartime still picture pool, after his surrender.

On one side towered a 7ft 3in (2.21m) German man-mountain who quit his job with an American freak show to join the Wehrmacht. On the other stood a 5ft 7in (170 cm) AP photographer Eddie Worth. Jakob Nacken stood quietly while the British troops frisked him and this David vs Goliath match-up provided a rare moment of amusement during the fighting.

Nacken began his career in show business performing as “Uranus” and the “giant from the Rhineland” in a German traveling circus. He was called Germany’s tallest man and was credited as being the world’s tallest man at the time.

Nacken wore size 17 boots as an adult. He had bruises on his head from hitting the tops of doorways that were built to accommodate people of normal height.

He returned to Germany at the beginning of World War II and was immediately drafted into the army, becoming their tallest soldier on record. Nacken was put into a gun crew with 250 soldiers who were captured at Calais, France, in August 1944. 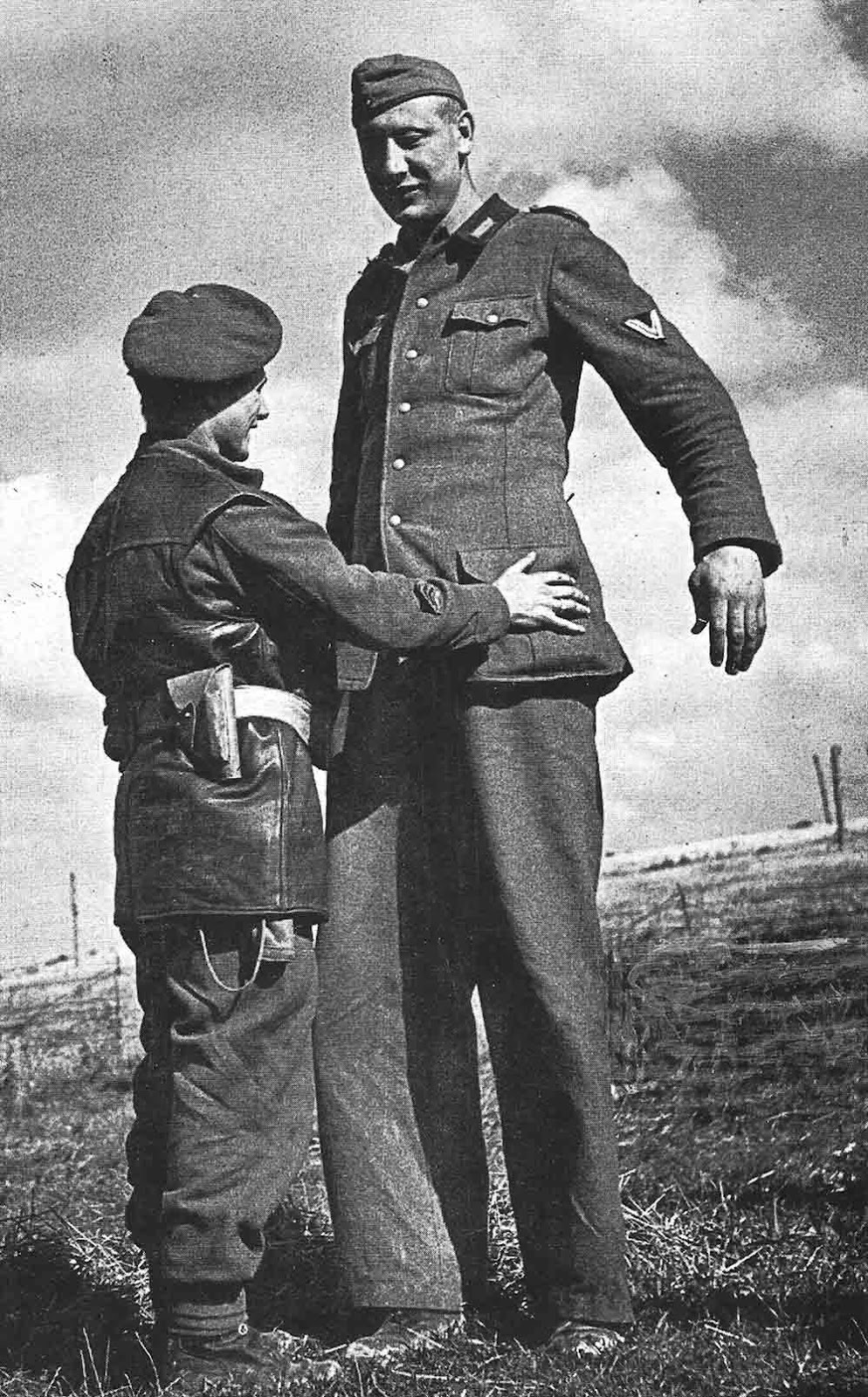 Canadian Corporal Eldon “Bob” Roberts (5 feet 3 inches (1.60 m)), who commanded a troop of seven men, captured the gun crew. Nacken and his men were taken to England as prisoners of war and remained there until the end of the war.

In August 1949, newspapers announced Nacken was to return to the United States because he wanted to leave post-war Germany. Nacken’s sister, who already lived in the United States, prepared a place for him and his wife to live in Paterson, New Jersey.

Nacken and his wife emigrated to the United States on SS Atlantic from Genoa, Italy, arriving in the port of New York City on December 6, 1950.

Nacken sought work that would suit his stature. Through newspaper pictures and Pathé newsreels, he was well-known. In December 1949, he worked as Santa Claus. Children were able to walk between his legs and he was dubbed the world’s tallest Santa.

Nacken worked in Ripley’s Believe It or Not! shows as the “World’s Tallest Man”. He appeared on several television shows as a celebrity known as “Germany’s Long Jake”. He died in Europe at age 81. 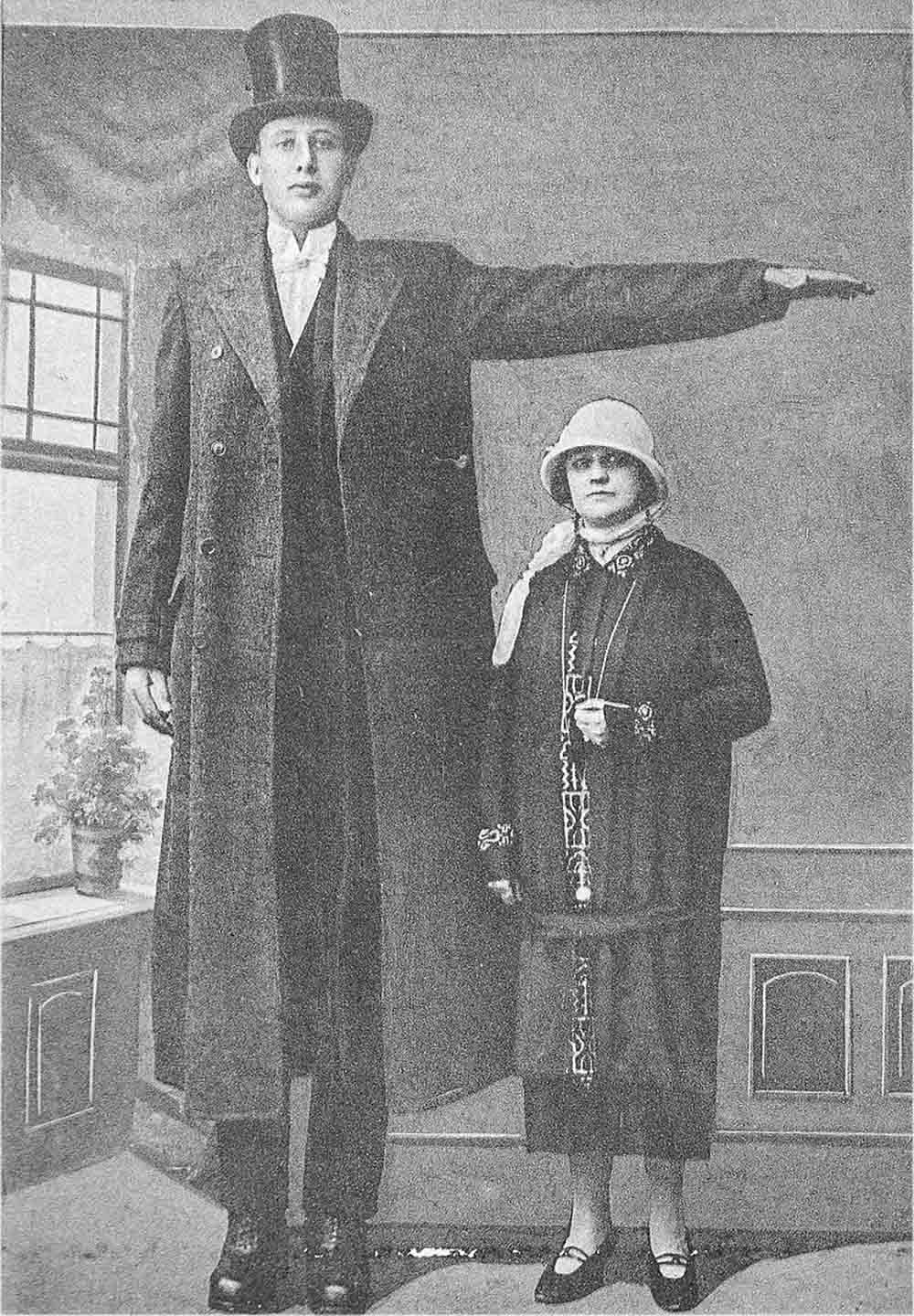 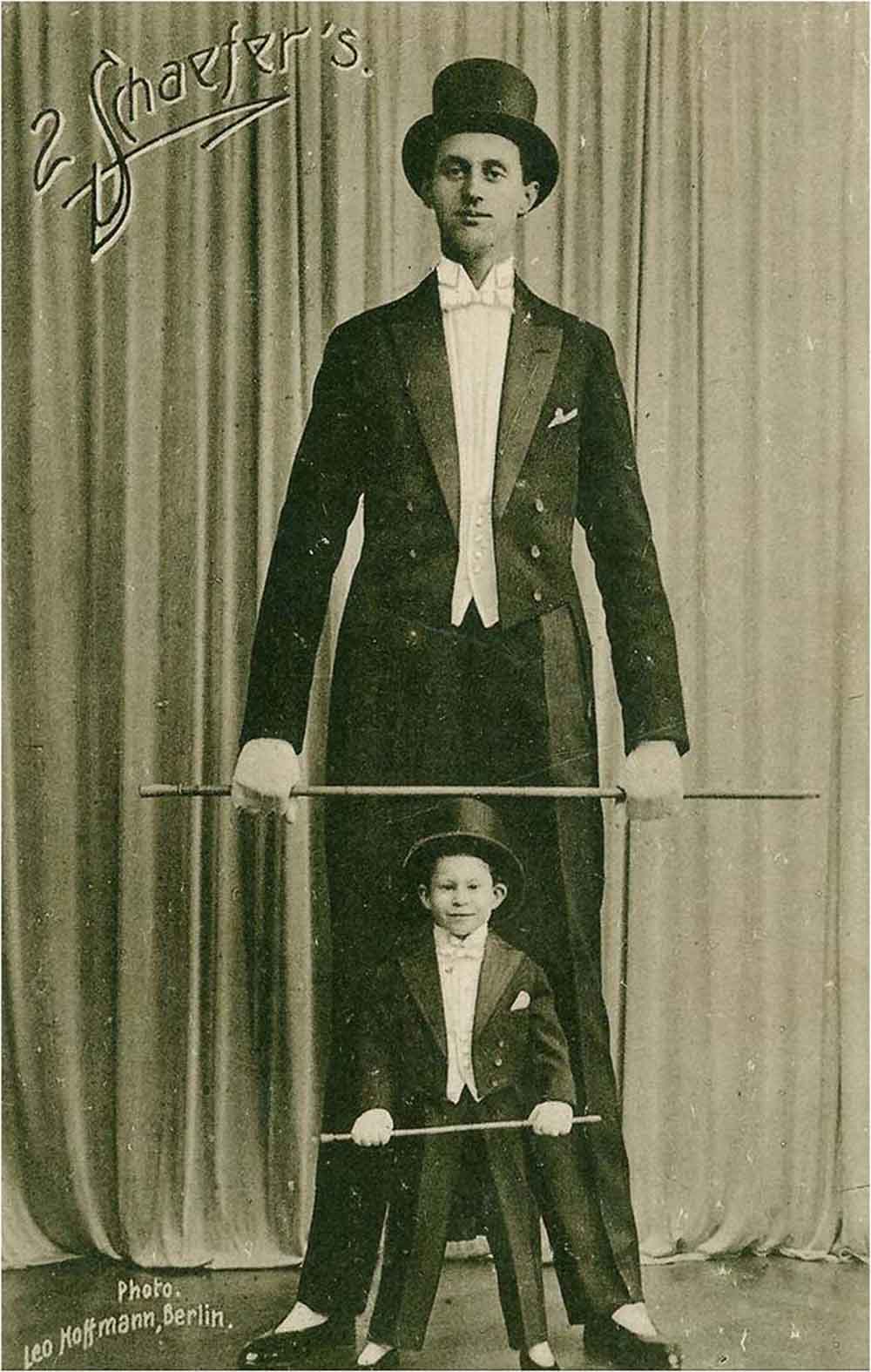 Nacken 17 as circus acrobat with a young boy assistant. 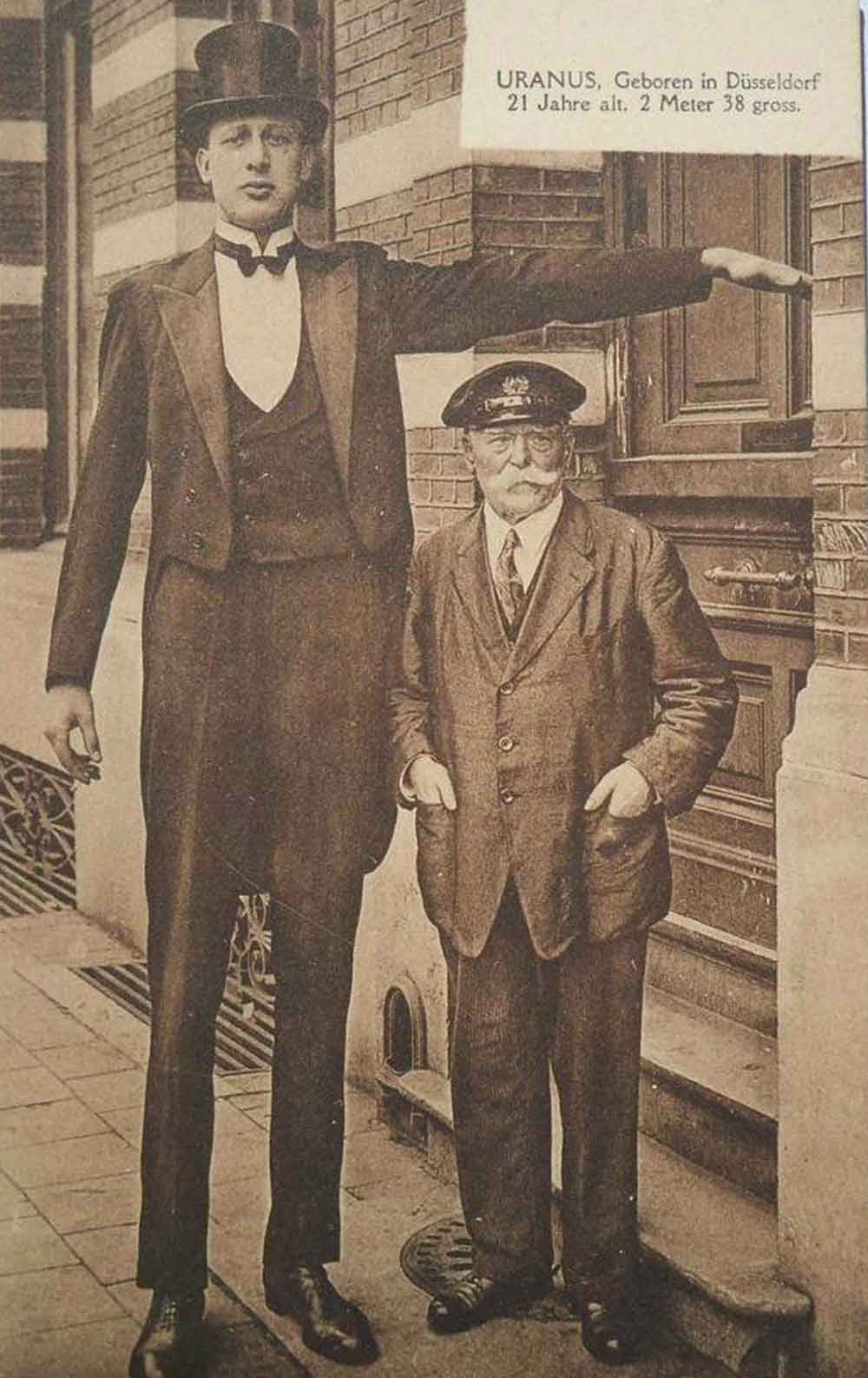 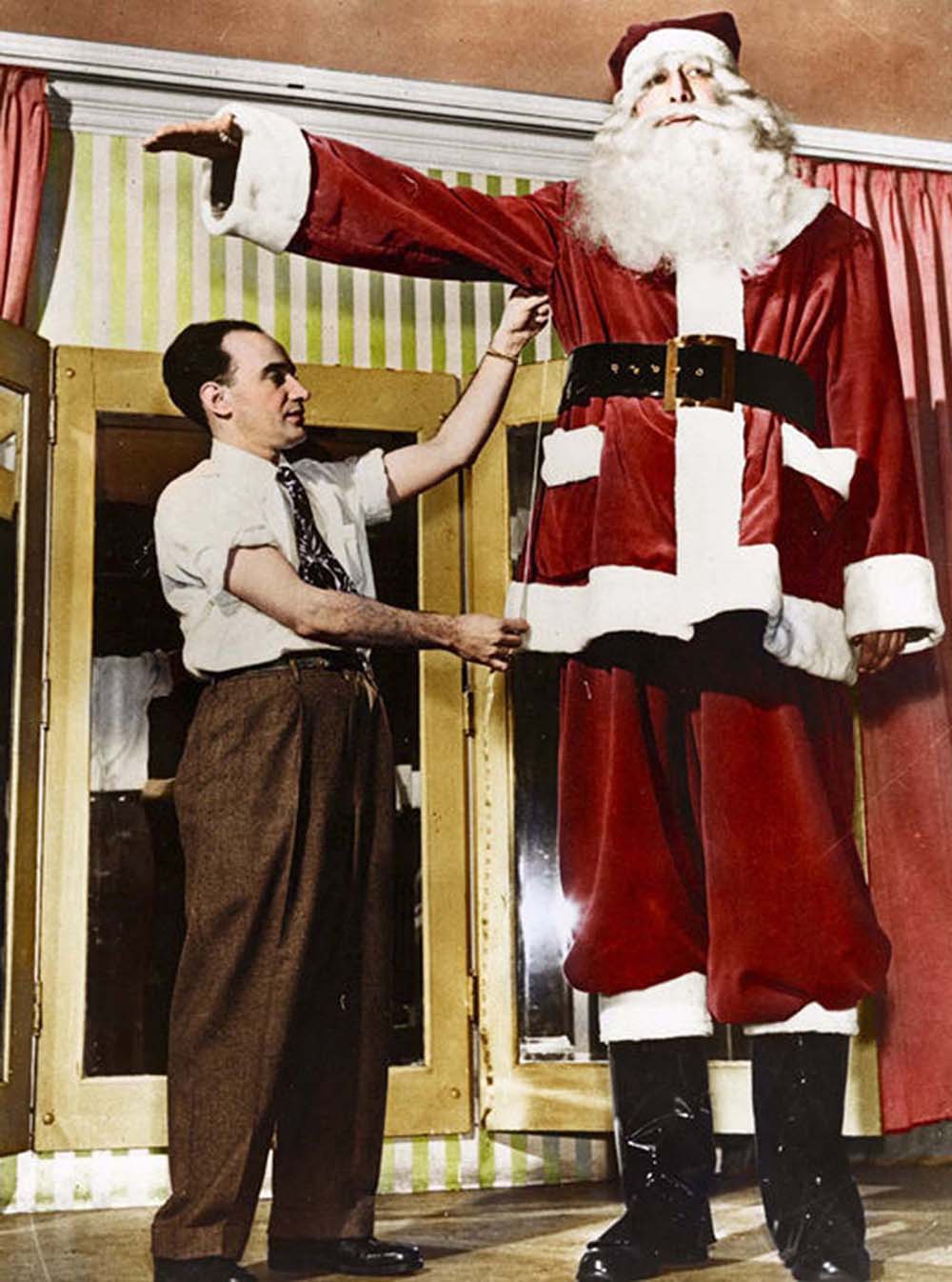