She wrote a few lines in German on the back of the photo. “Chanukah, 5692. ‘Judea dies’, thus says the banner. ‘Judea will live forever’, thus respond the lights”.

It was the eighth night of Chanukah in Kiel, Germany, a small town with a Jewish population of 500. That year, 1931, the last night Chanukah fell on Friday evening, and Rabbi Akiva Boruch Posner, spiritual leader of the town was hurrying to light the Menorah before the Shabbat set in.

Directly across the Posner’s home stood the Nazi headquarters in Kiel, displaying the dreaded Nazi Party flag in the cold December night.

With the eight lights of the Menorah glowing brightly in her window, Rabbi Posner’s wife, Rachel, snapped a photo of the Menorah and captured the Nazi building and flag in the background. 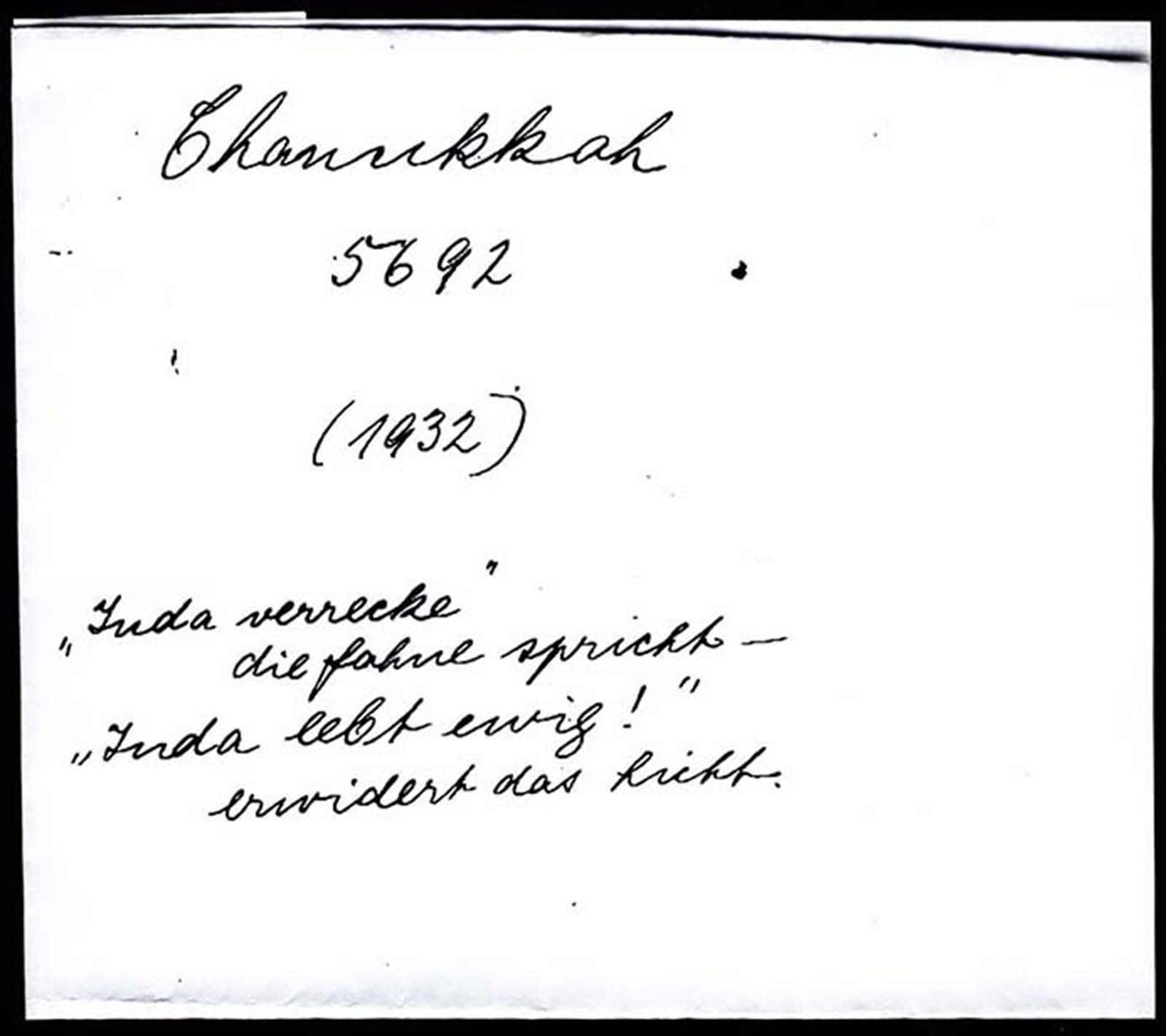 The back of the photograph of the Posner family’s Hanukkah menorah taken in Kiel Germany, Hanukkah 5692 (1931). The date of 1932, inscribed on the back, most likely refers to the date the picture was developed.

The image, freezing in time a notorious piece of the past, has grown to become an iconic part of history for the Jewish community. But until just recently, not much was known about the origins of the photo.

Both the menorah and photo survived World War II, with the Hanukkah finding its way to Yad Vashem through the loan of Yehudah Mansbuch.

Mansbuch is the grandson of the woman who took the picture, and he retains the original snapshot. When Yad Vashem was putting together its plans to open the Holocaust History Museum, a team of researchers set out to learn more about this famous photo.

Their inquiries led to Mansbuch, who explained how his grandmother and grandfather had lived under Nazi oppression in Kiel, Germany, eventually fleeing to then-Palestine in 1934. 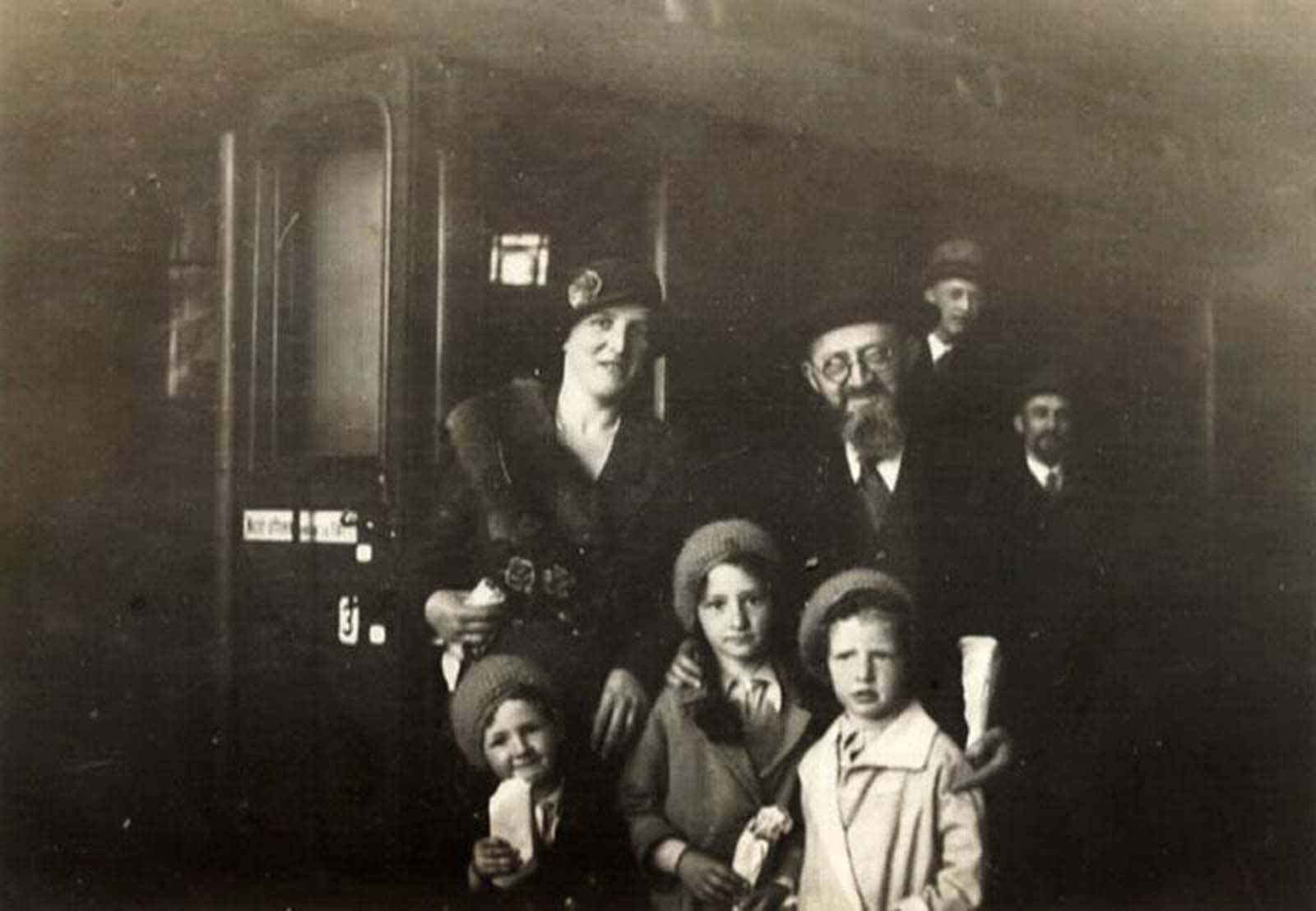 Rabbi Dr. Akiva Posner, his wife Rachel and their three children: from right to left: Avraham Chaim, Tova and Shulamit, at the train station in Kiel upon leaving Germany, 1933

According to YadVashem Organization: Rabbi Dr. Akiva Posner, Doctor of Philosophy from Halle-Wittenberg University, served as the last Rabbi of the community of Kiel, Germany before the Holocaust.

After Rabbi Posner publicized a protest letter in the local press expressing indignation at the posters that had appeared in the city: “Entrance to Jews Forbidden”, he was summoned by the chairman of the local branch of the Nazi party to participate in a public debate. The event took place under heavy police guard and was reported by the local press.

When the tension and violence in the city intensified, the Rabbi responded to the pleas of his community to flee with his wife Rachel and their three children and make their way to Eretz Israel.

Before their departure, Rabbi Posner was able to convince many of his congregants to leave as well and indeed most managed to leave for Eretz Israel or the United States. The Posner family left Germany in 1933 and arrived in Eretz Israel in 1934.

Yehudah Mansbuch, the grandson of the family who took the photo, remembers:

“It was on a Friday afternoon right before Shabbat that this photo was taken. My grandmother realized that this was a historic photo, and she wrote on the back of the photo that ‘their flag wishes to see the death of Judah, but Judah will always survive, and our light will outlast their flag.’

My grandfather, the rabbi of the Kiel community, was making many speeches, both to Jews and Germans. To the Germans, he warned that the road they were embarking on was not good for Jews or Germans, and to the Jews, he warned that something terrible was brewing, and they would do well to leave Germany.

My grandfather fled Germany in 1933, and moved to Israel. His community came to the train station to see him off, and before departed he urged his people to flee Germany while there’s still time.”

Today, Yehudah Mansbuch lives in Haifa (Israel) with his family. Each Hanukkah, Yad Vashem returns the now-famous menorah to the family, who light the candles for eight nights before returning the piece of history back to the Holocaust trust.

The Hanukkah menorah, also chanukiah or hanukkiah, is a nine-branched candelabrum lit during the eight-day holiday of Hanukkah, as opposed to the seven-branched menorah used in the ancient Temple or as a symbol.

On each night of Hanukkah a new branch is lit. The ninth holder called the shamash (“helper” or “servant”) is for a candle used to light all other candles and/or to be used as an extra light.