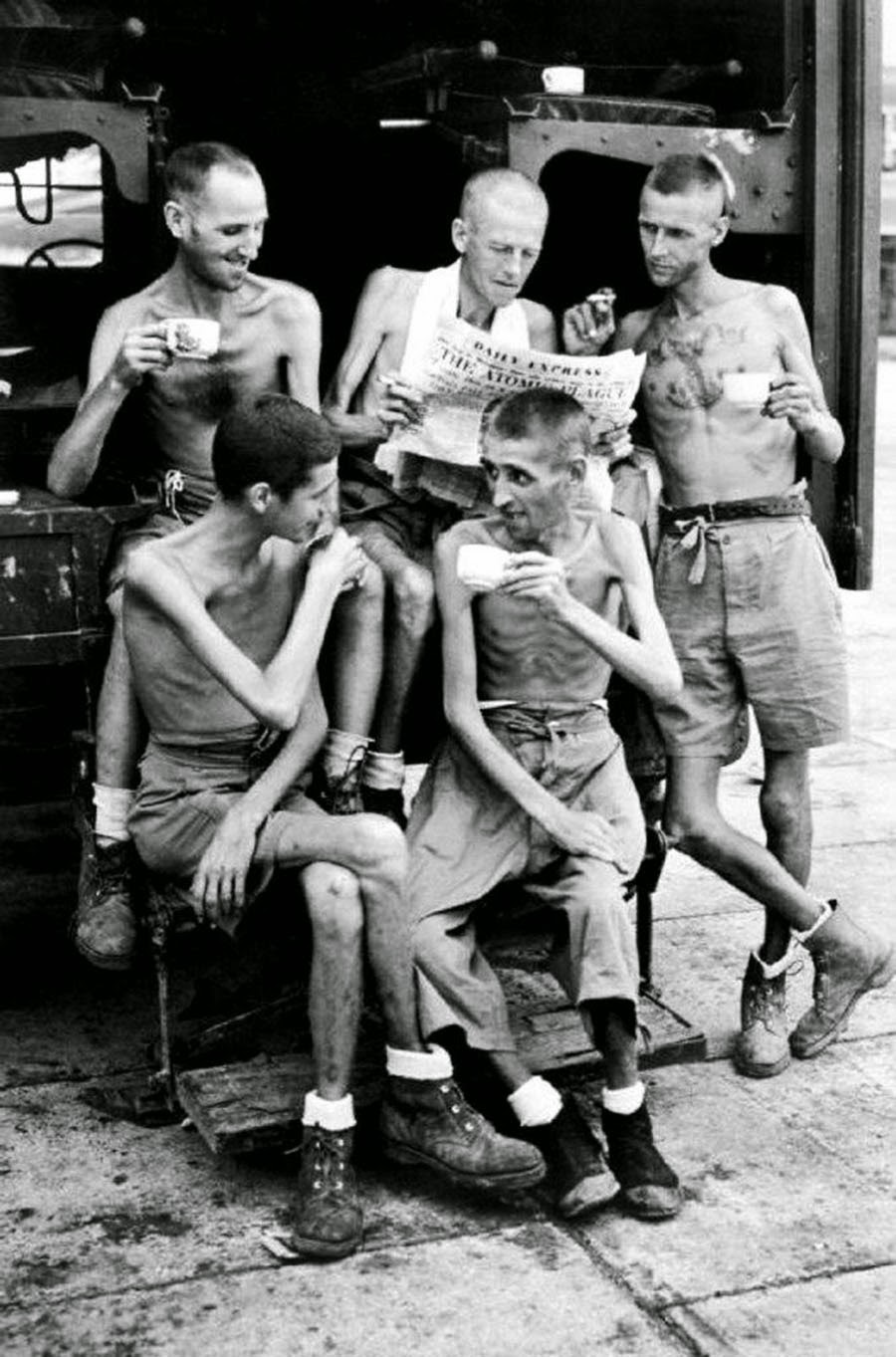 Five Australian former prisoners of war catch up on news from home after their release from Japanese captivity in Singapore, September 1945.

Five Australian former prisoners of war of the Japanese relax with cups of tea and a newspaper after the Japanese surrender. The brutal treatment inflicted upon these men by their Japanese captors is clearly illustrated by their poor physical condition.

These prisoners were held on the Changi POW camp. Often thought to be synonymous with horror it was in fact a relatively comfortable camp, at least compared to those on Borneo, Ambon, Hainan, Japan and the Thai–Burma railway. The Japanese used the POW’s at Changi for forced labor. Men were made to work in the docks where they loaded munitions onto ships. They were also used to clear sewers damaged in the attack on Singapore. As the end of the Pacific War approached, rations to the POW’s were reduced drastically. To be more precisely ration scales were reduced even for the Japanese as resupply from outside Malaya/Singapore became more difficult as the war progressed. It must be noted that at the same time Japanese front line troops were dying of starvation in New Guinea (and turning cannibal if eye-witness accounts are to be believed).

Individuals experiencing starvation lose substantial fat and muscle mass as the body breaks down these tissues for energy. Depending on the level of starvation the full recovery might take as long as one year. There have been cases when prisoners have died from eating too much afterwards. This is called Refeeding Syndrome which is a syndrome consisting of metabolic disturbances that occur as a result of reinstitution of nutrition to patients who are starved or severely malnourished. That’s why recovering patients are only to be given water, milk, and juices for the first 3-5 days of recovery.

When individuals who are starving suddenly get given a bunch of food, their body switches quickly from eating itself to rebuilding. This causes big shifts of minerals out of the blood and into the cells, and blood levels plummet, where previously they were being artificially maintained. It’s actually got a mortality rate of about 20%. Most of the research on it was done after all these individuals getting out of POW camps were stuffed with food and died instead of recovering. They need to slowly bring starving people back to normal calorie diets, and watch their blood chemistry closely.