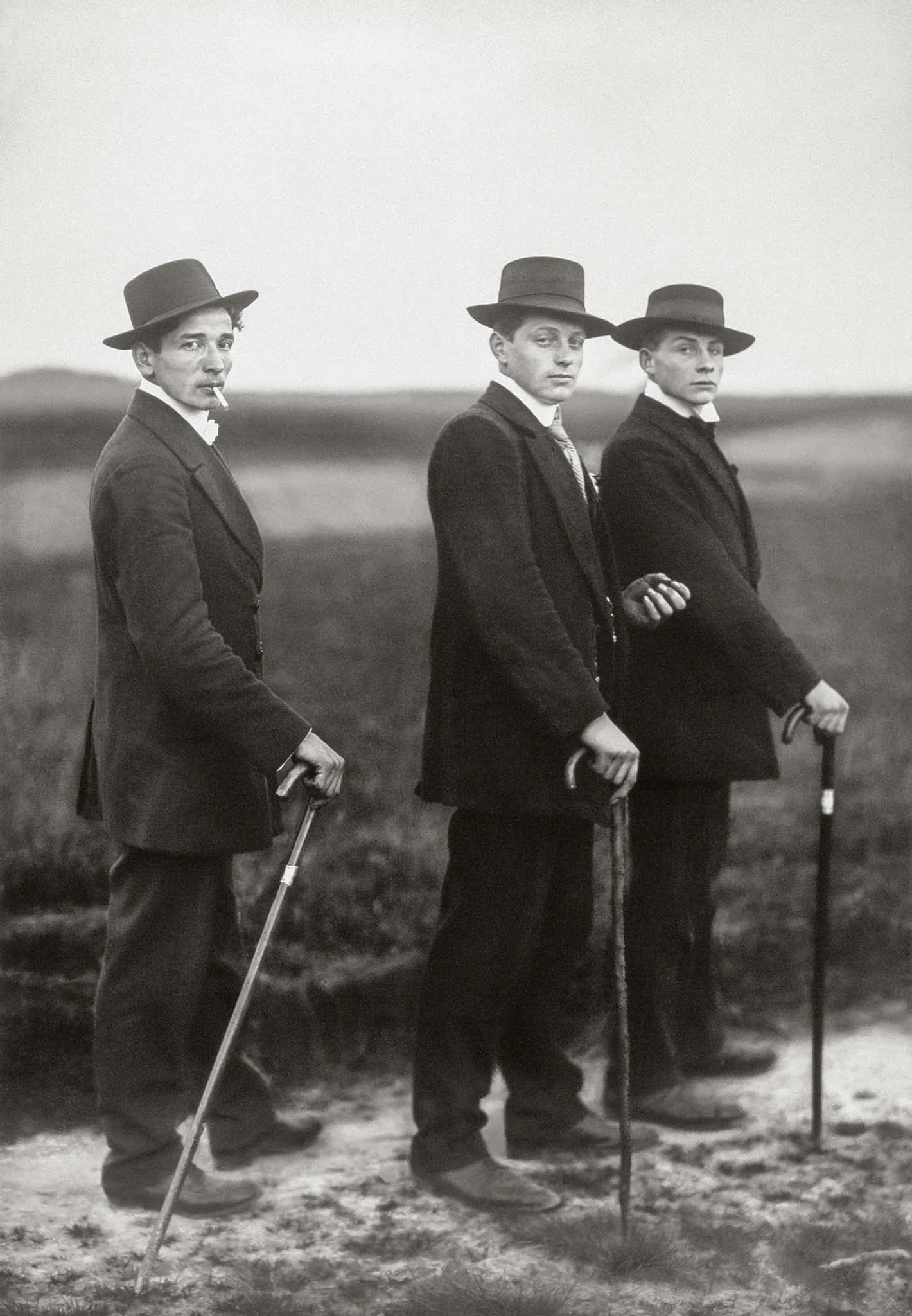 In 1914, German photographer August Sander captured a now-famous photo titled “Young Farmers” which is also known as “Three Farmers on Their Way to a Dance”.

Upon first glance, it may look like a simple snapshot of three nicely dressed young men walking along a dirty road, but there’s so much more you can learn about the photo by examining it closely and by looking at the cultural context of the time.

All three of them wear suits and hats and gaze with some self-assurance directly at the photographer. The young man on the left has unkempt hair peeking out from his tilted hat, a cigarette dangling nonchalantly from his lips, and holds a wooden cane at an angle to the ground.

The central figure is holding a cigarette in his left hand and clasps a cane in the other, while the man on the right and at the front of the group seems rooted to the spot, his cane held straight to the ground echoing his upright posture.

Although the photo is titled “Young Farmers”, they weren’t actually farmers. Two worked in an iron ore mine and one worked in the mine’s office. And the three men were actually on their way to two different dances.

One of the dances they knew about: it was the dance in a nearby village. And the other they were heading toward unknowingly, as the photo was captured shortly before World War I erupted, and one of the three men became one of the millions of combatants who perished in the conflict. Y

ears later it was discovered that actually all of them fought in the First World War and one of them was killed in action.

“Perhaps most striking about this portrait of three farmers walking along a country road on their way to a dance is their formal dress: each wears a hat and suit and carries a walking stick,” writes the Getty Museum.

“This formal appearance removes them from the reality of their occupations. Each man is seen from the side, glancing over his shoulder at the photographer; they stop only for a moment before continuing on their journey.”

The Marxist art critic John Berger famously analyzed the photograph in his influential essay ‘The Suit and the Photograph’ (1980) writing: ‘The date is 1914.

The three young men belong, at the very most, to the second generation who ever wore such suits in the European countryside. Twenty or 30 years earlier, such clothes did not exist at a price which peasants could afford.’

Berger suggests that these mass-market suits, emulating the higher quality attire of the bourgeois urban class, draws attention to, rather than disguises, their ‘social caste’, and not in a particularly flattering sense.

In his essay, Berger considers that the three young men are of a social group not beyond the reach of inspirational advertising campaigns and travelling salesmen, and in a state of awkward transition, succumbing to a new ‘cultural hegemony’.

The photograph is one of many photographs taken by August Sander of rural people from the wooded low mountain region of Westerwald in the German federal states of Rhineland-Palatinate, Hesse, and North Rhine-Westphalia.

Westerwald was the region where the photographer was born, and it was where he traveled in search of new clients after setting up his portrait studio in Cologne-Lindenthal in 1910, having returned to Germany the previous year from Linz, Austria.