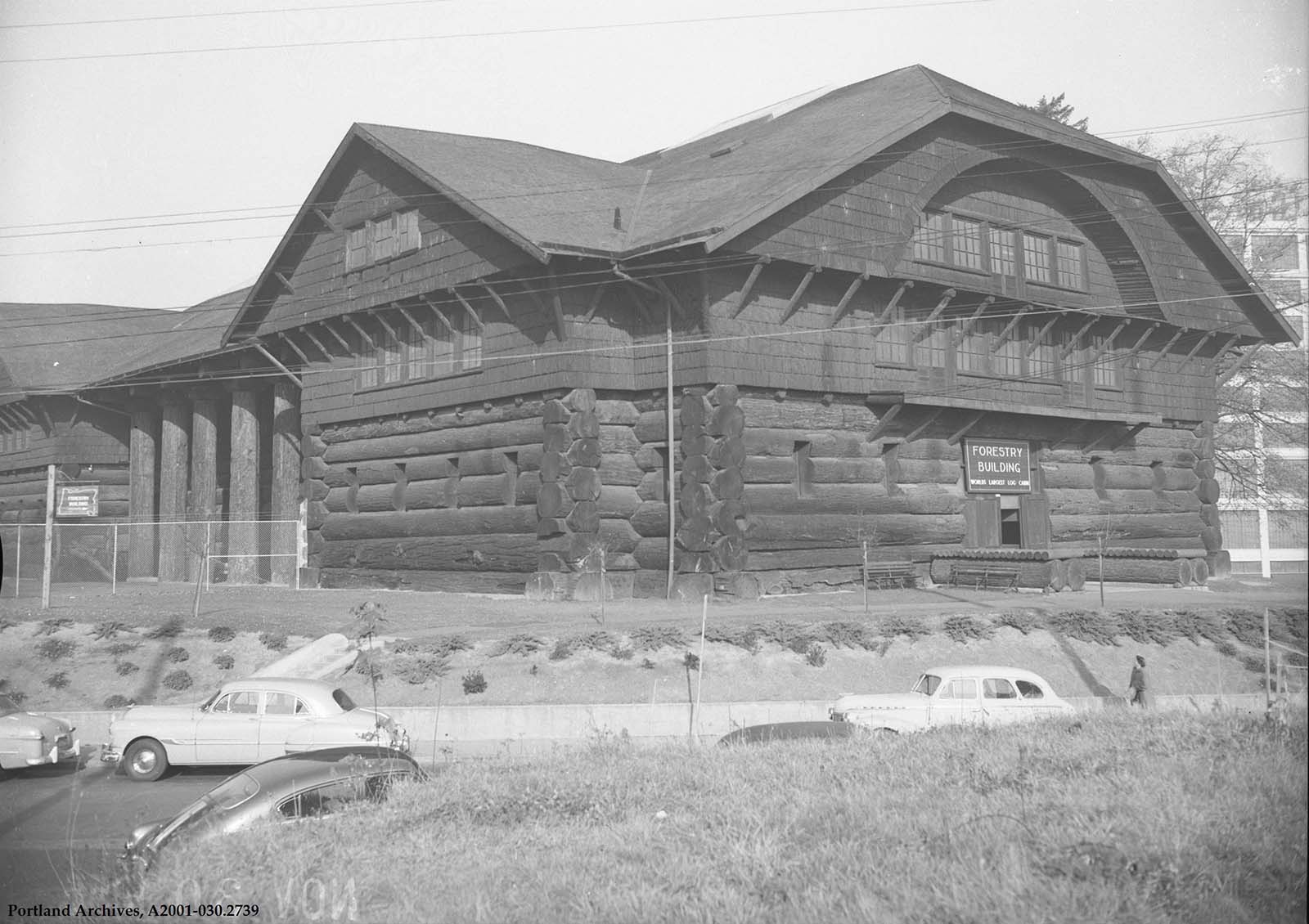 The Forestry Building in 1956.

Dubbed by the media as the “world’s largest log cabin,” (actually, second largest), the Forestry Building was constructed as part of Portland’s Lewis and Clark Centennial Exposition of 1905. The cabin was an enormous structure, measuring 206 feet long (62m), 102 feet wide (31m) and 72 feet high (22 meters, approximately 7 stories). A full million board feet of lumber went into it.

Its construction was said to have cost approximately $30,000 (about $950,00 today). Most of the giant logs used in the building were selected and purchased from old-growth trees in Columbia County, Oregon, by the American lumber baron and philanthropist Simon Benson.

Architect Ion Lewis (1853-1933), of the noted Portland architectural firm of Whidden and Lewis, designed the Forestry Building for the massive log cabin.

Architectural historian Henry Matthews, in his biography of the architect Kirtland K. Cutter said of the Forestry Building: “The Forestry Building at the Lewis and Clark Centennial Exposition of 1905 in Portland, Oregon, designed by Ion Lewis of Whidden and Lewis and his young assistant Albert E. Doyle, offered another precedent for rustic architecture on a grand scale.

This building, described as the ‘world’s largest log cabin’ or the ‘Parthenon of Oregon’ had an interior ‘nave’ of unpeeled logs forty-eight feet high. This veritable cathedral of giant trees was by far the most popular attraction of the exposition and confirmed the public taste for such architecture.” 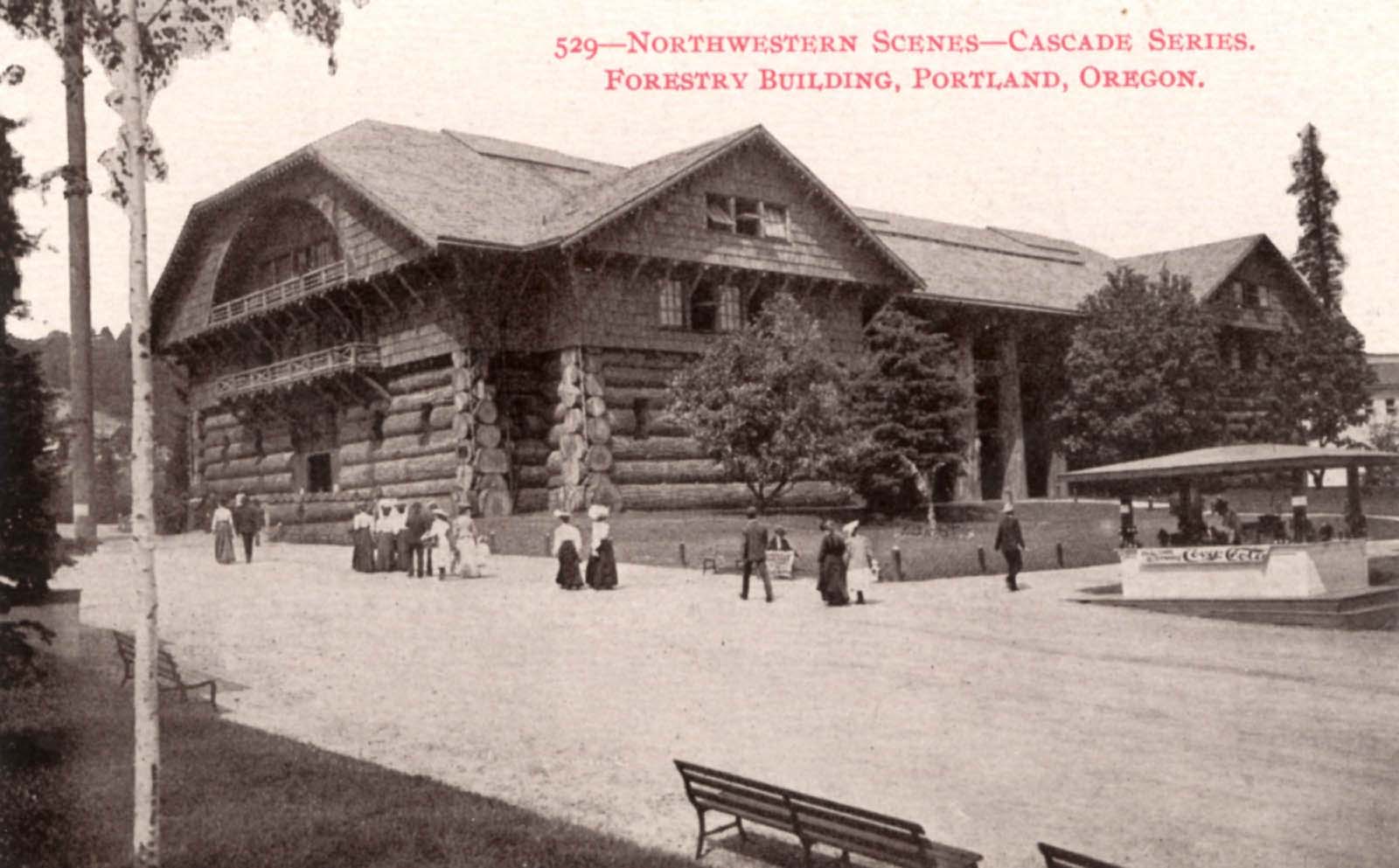 According to the Pacific Coast Architecture Database, the interior of the Forestry Building featured colonnades of 54 massive, unpeeled six-foot-thick tree trunks (Douglas Fir), hand-matched like a string of pearls. They’d had to be handled specially when they were cut and hauled, to preserve the bark.

The logs support a 2-story center aisle, cruciform in plan, lit by skylights. The building housed an exhibit highlighting the forestry industry, local flora and fauna, and Native American photos and artifacts.

After the expedition ended, the Forestry Building was purchased by the city of Portland, and for many years the building stood uncared for and in disrepair.

The building was almost lost to fire in 1914 when the California Building caught fire and burning embers fell on the roof of the Forestry Building, but a quick response by the fire department prevented the conflagration from spreading.

In the 1920s, talks began about dismantling the building and salvaging the valuable logs, but the proposal was rejected. However, the state also refused to pay for repairs.

By then, the building had turned into a safety hazard and was closed to the public. In the late 1940s, there was another fire started by sparks from a caretaker’s stove. It burned a hole in the roof about 15 feet in diameter.

Finally, in the 1950s the Chamber of Commerce raised enough money to begin repairing the aging structure. Pretty soon, the building was mostly restored to its former glory. According to an Oregonian report, the cabin boasted a “priceless collection of logging and lumbering exhibits, both antique and modern.” 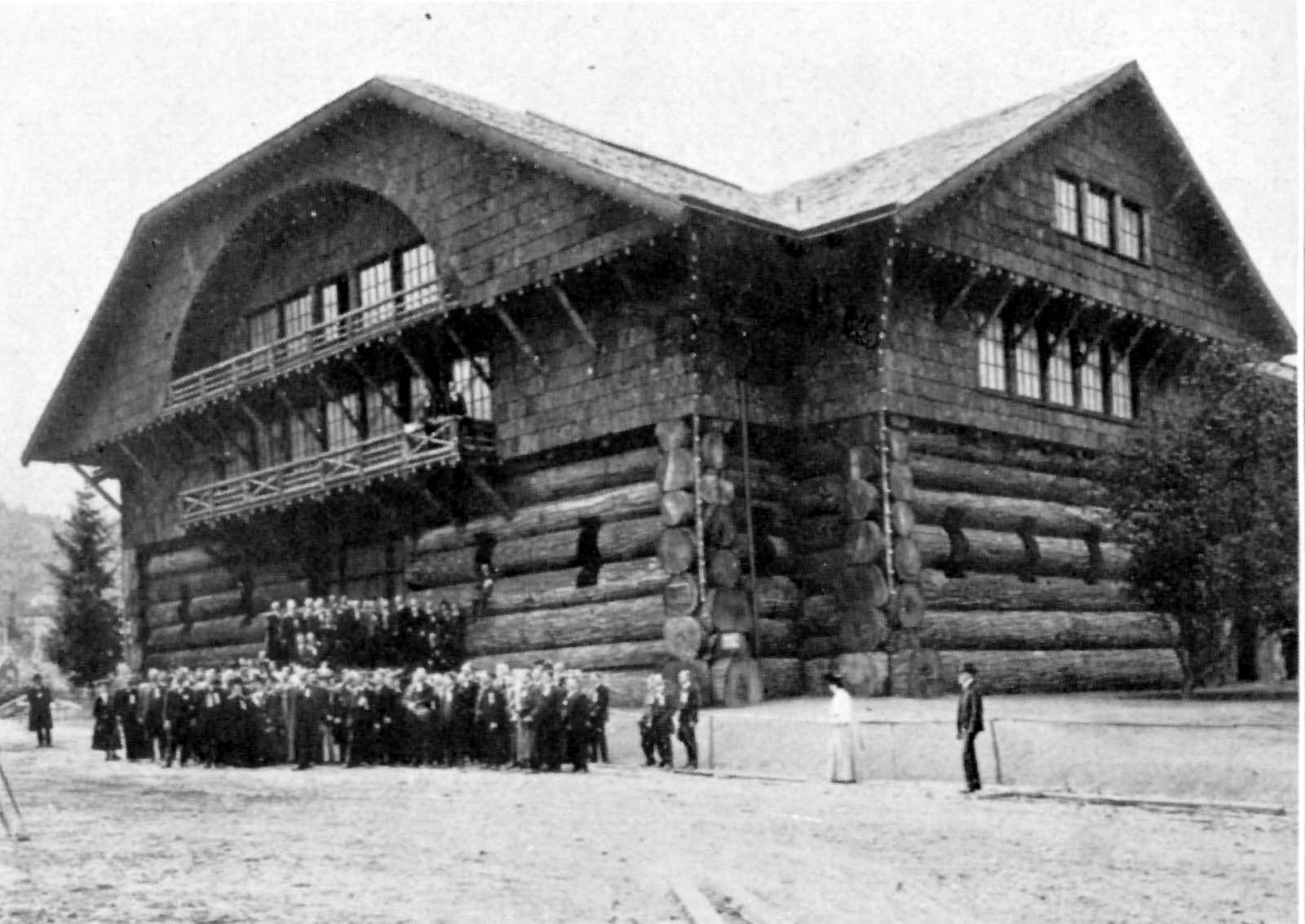 Forestry Building in about 1905.

On August 17, 1964, the Forestry Building’s caretaker locked up for the night and within 45 minutes neighbors were noticing that something was wrong. The whole building was on fire, and when the fire crews arrived it was clear that there was nothing they could do.

“There was never a hope of saving the building,” the Oregonian reported the next day. “Nothing was saved from the inside.” It turned out that the fire had been started by some bad vintage-1905 electrical wiring.

Had it broken out an hour earlier, the caretaker might have seen it in time to raise the alarm and possibly save the building. The fire rapidly grew to spectacular proportions, and people flocked to the scene from all over Portland.

“The flames were almost ten stories high,” reported an eye-witness. “The fire illuminated the sky for miles, the neighborhood was an orange glow. The windows on the entire south side of the Montgomery Park Building were blown out. The heat was so intense that the windows were popping out. Glass was falling down to the street below. Ashes the sizes of large snowflakes fell to the ground within a mile of the structure. It was surreal, an amazing sight.”

That was the end of the world’s largest log cabin. Fortunately, we can admire its glory and beauty through these vintage photographs. It was truly a magnificent building! 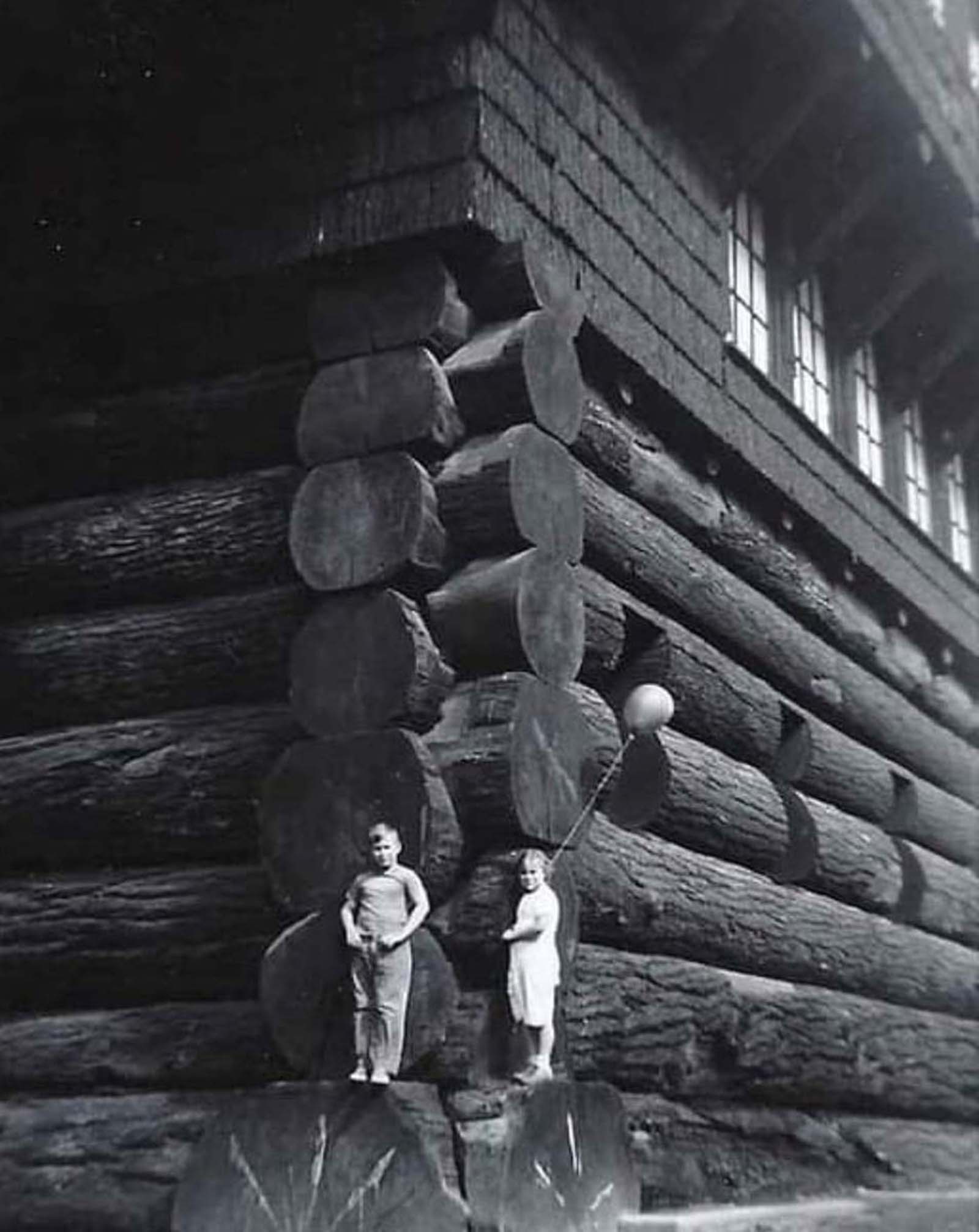 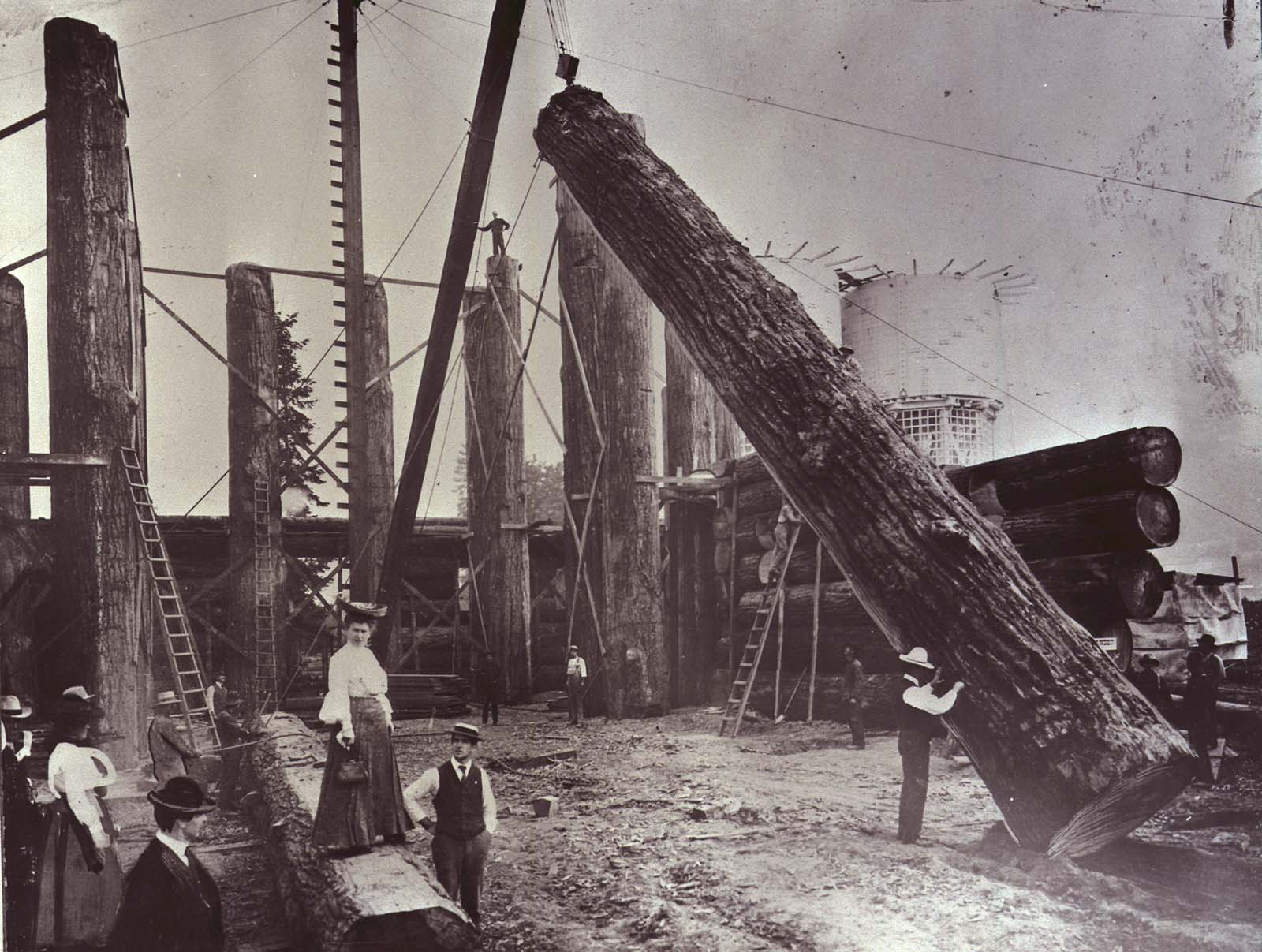 Construction of the Forestry Building, 1904. 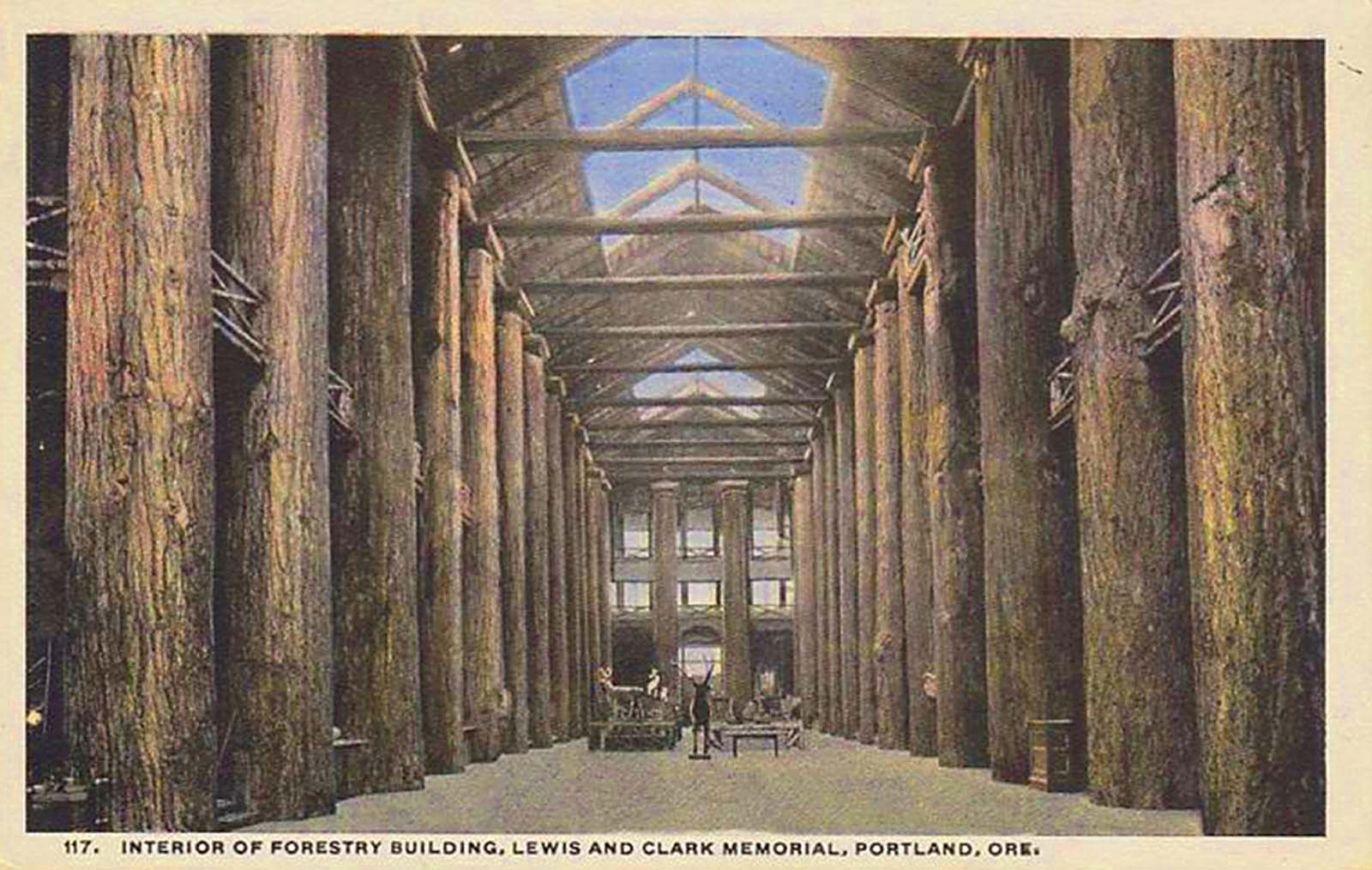 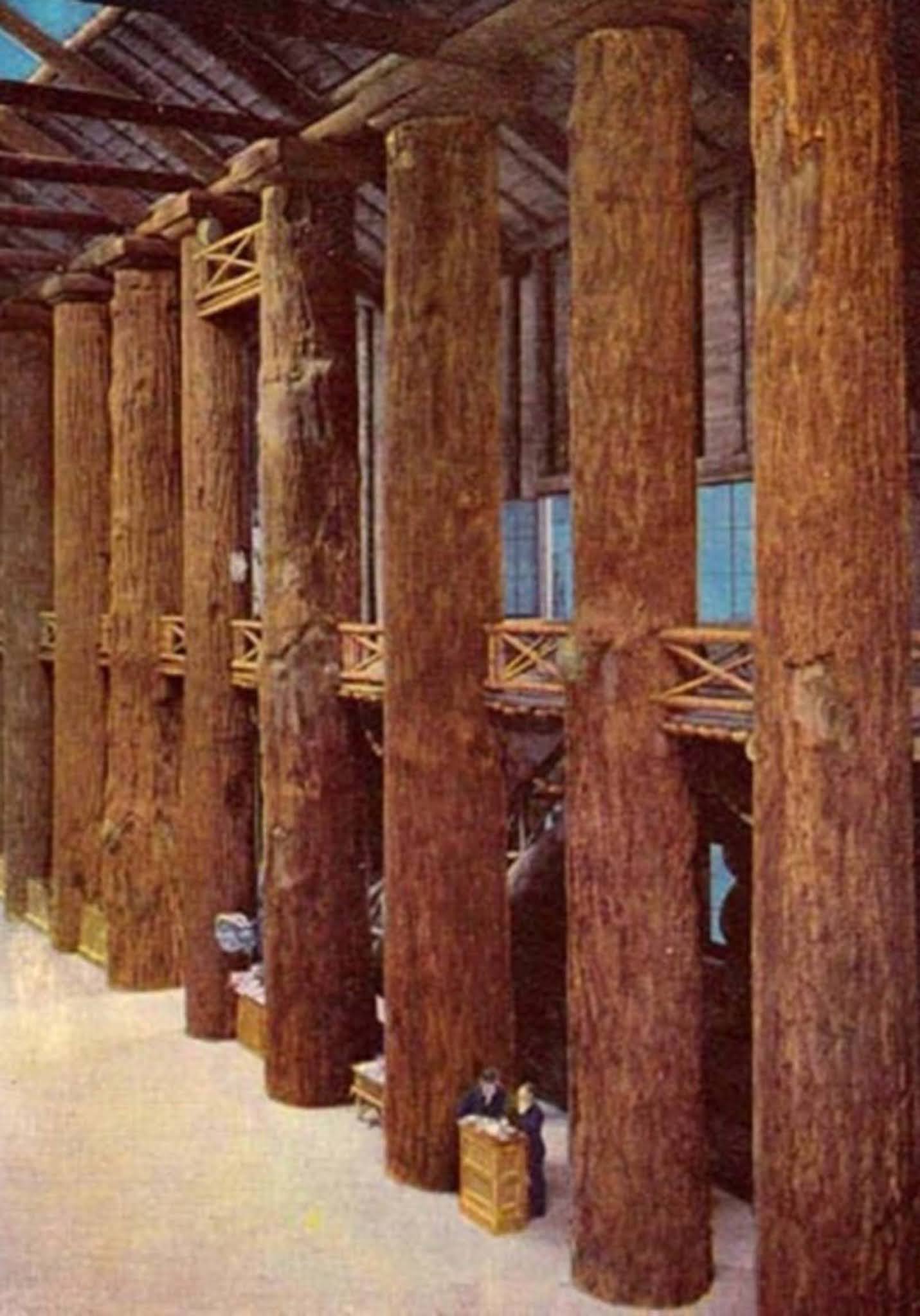 Compare the logs to the people at the bottom of th picture. 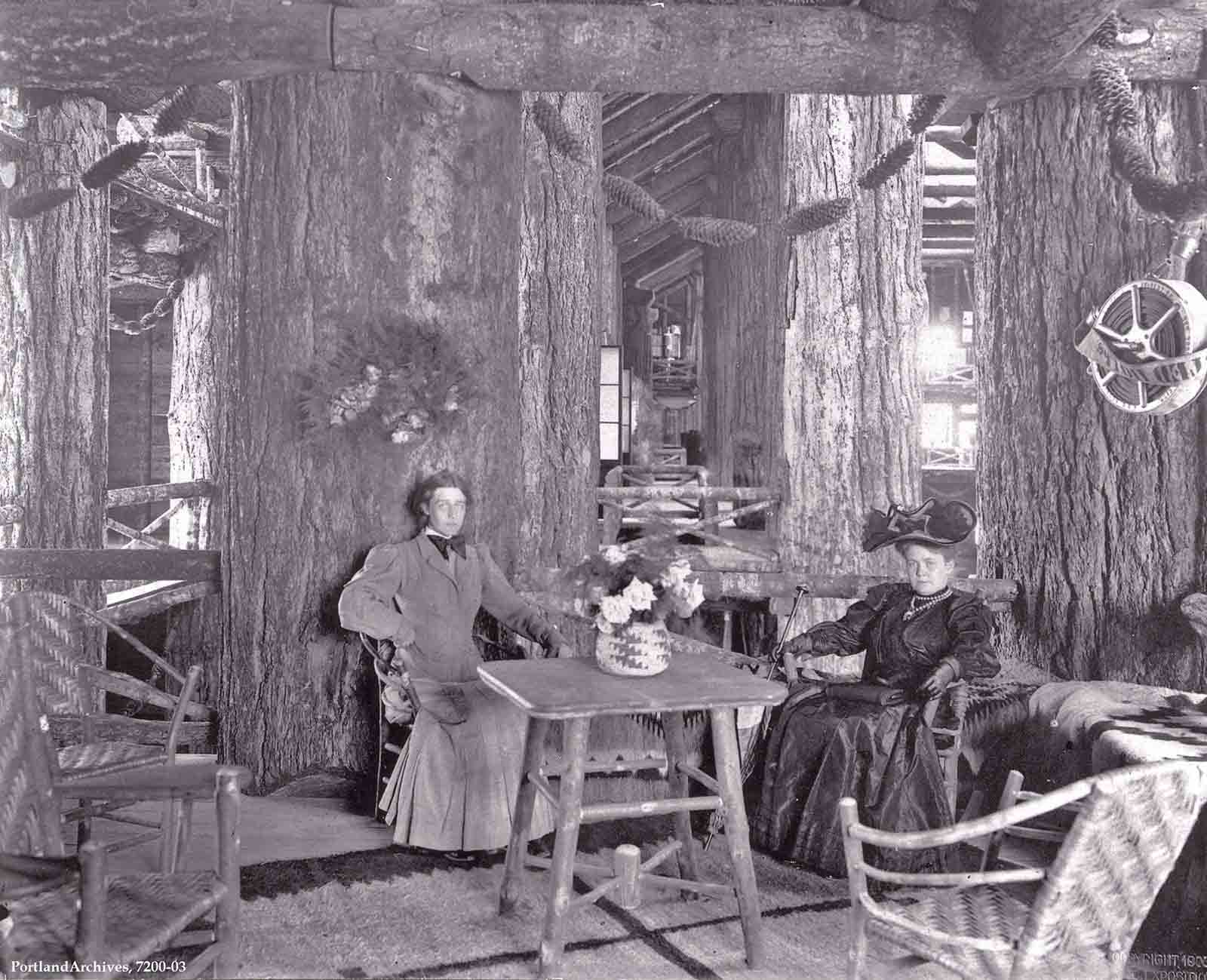 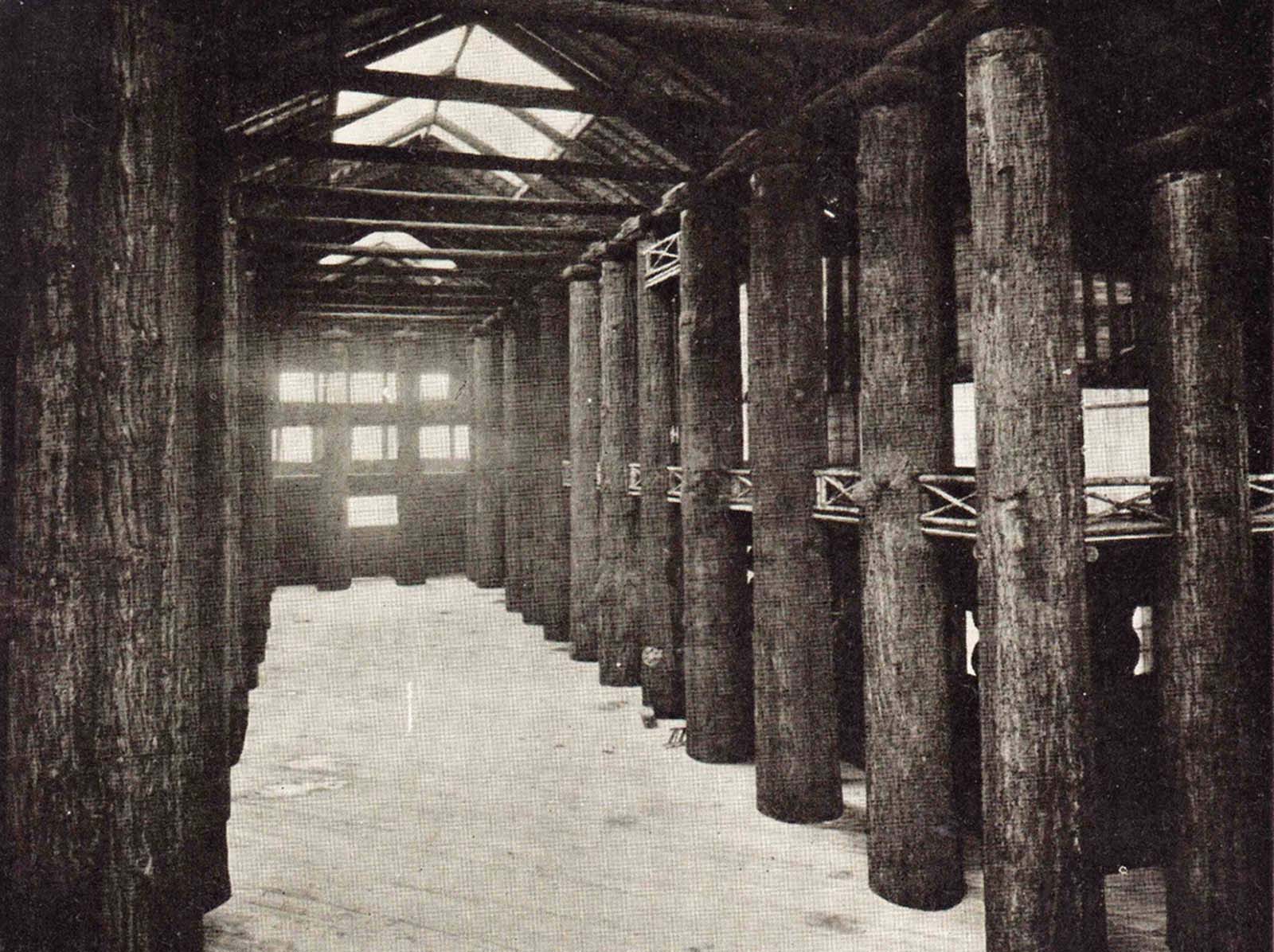 The interior of the Forestry Building, 1907. You can see how massive the logs are. 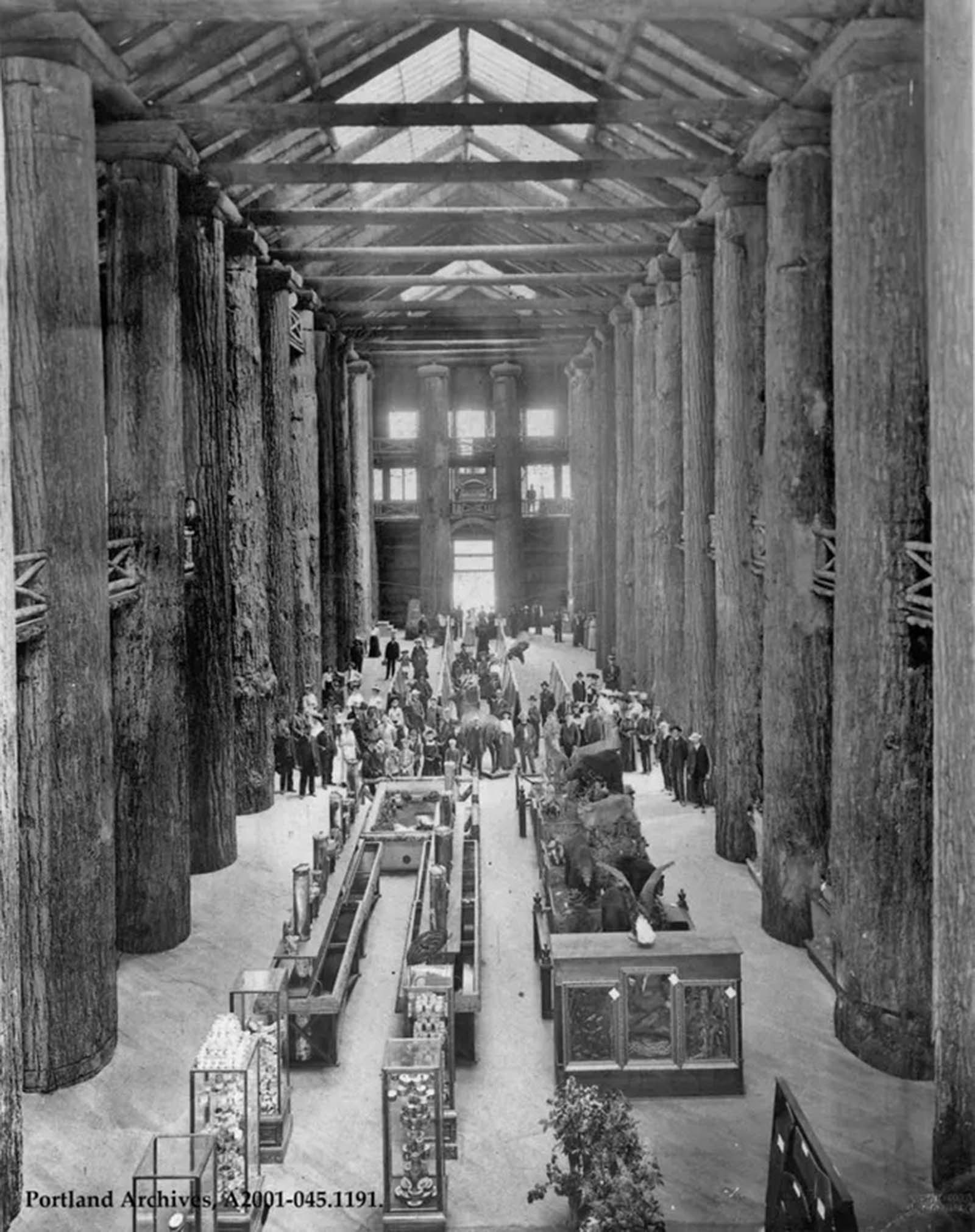 The interior of the Forestry Building at the Lewis and Clark Centennial Exposition, Portland, 1905. 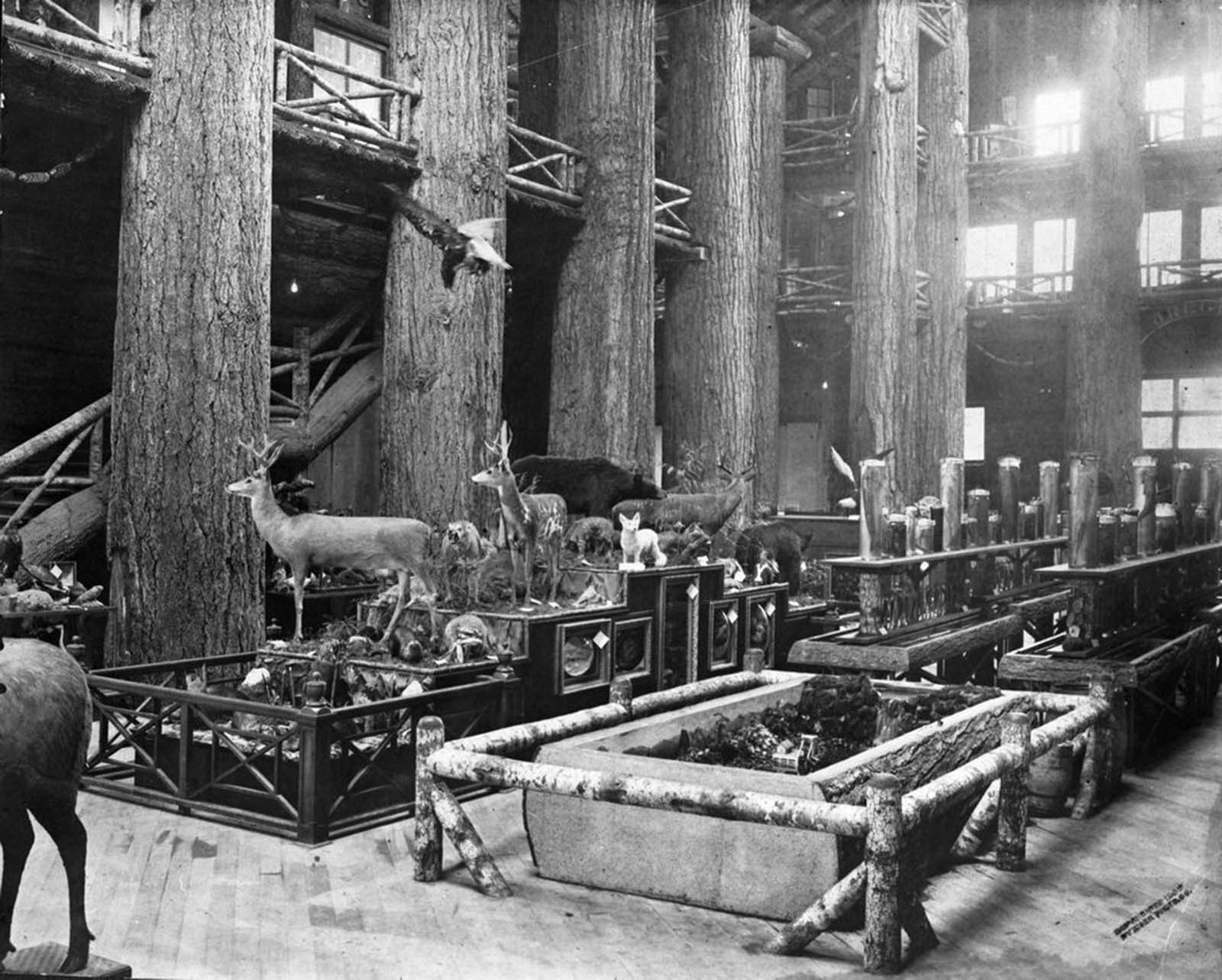 Display of stuffed animals in Forestry Building at Lewis and Clark Exposition, 1905.

Another view of the Forestry Building, 1907. 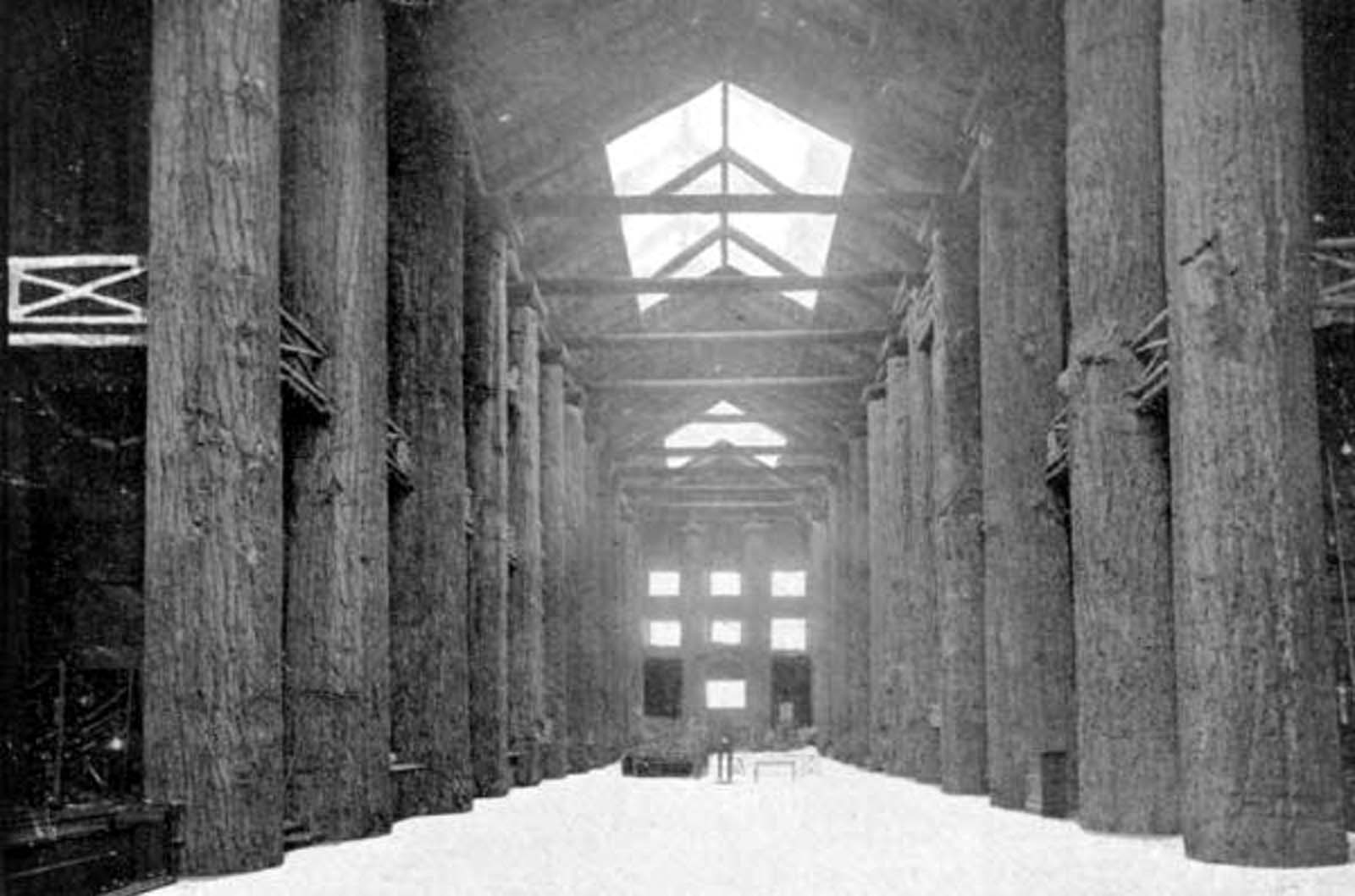 Look how massive the logs are! 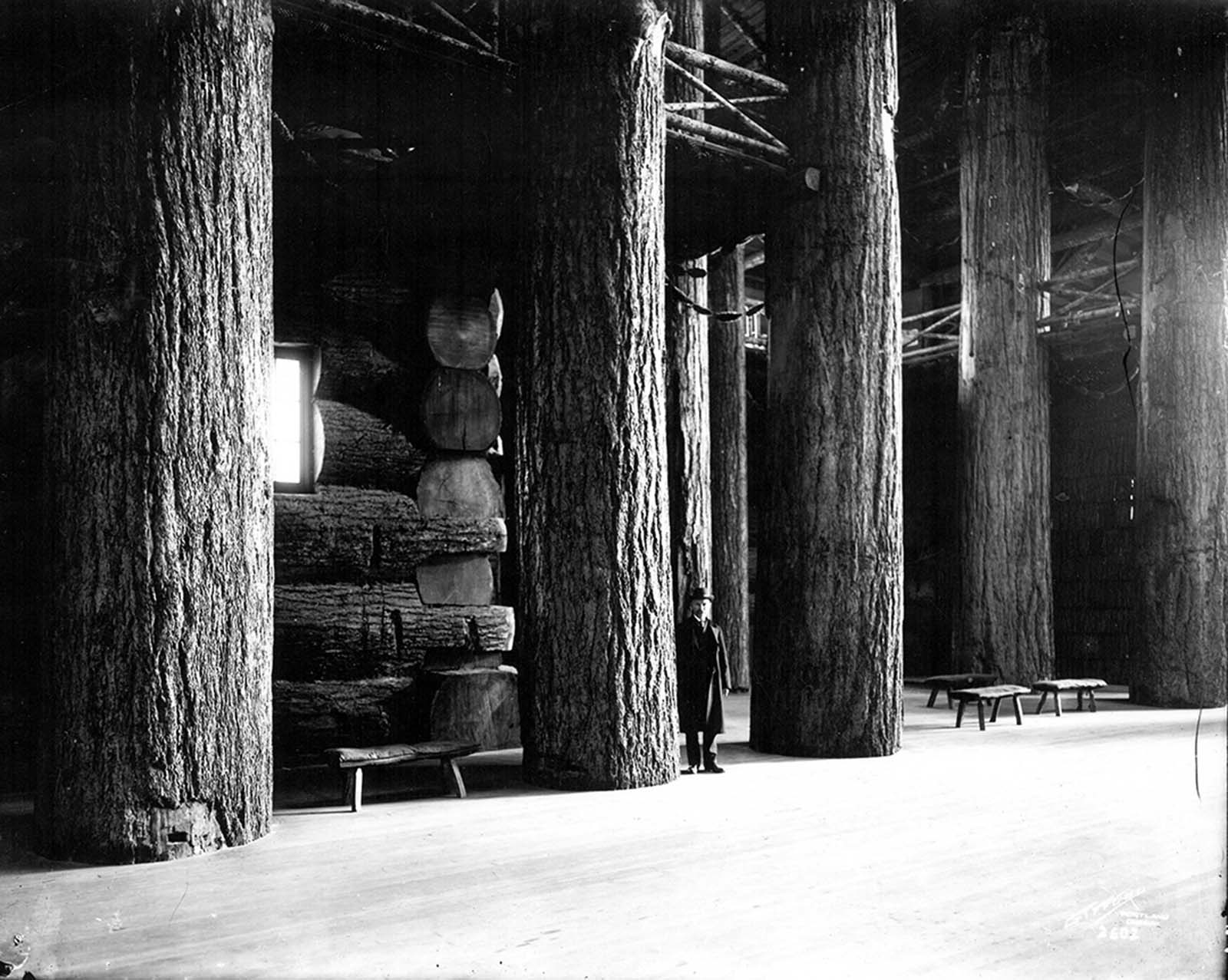 This interior view of the Forestry Building at the Lewis and Clark Exposition gives viewers an idea of the massive scale of the buildings. 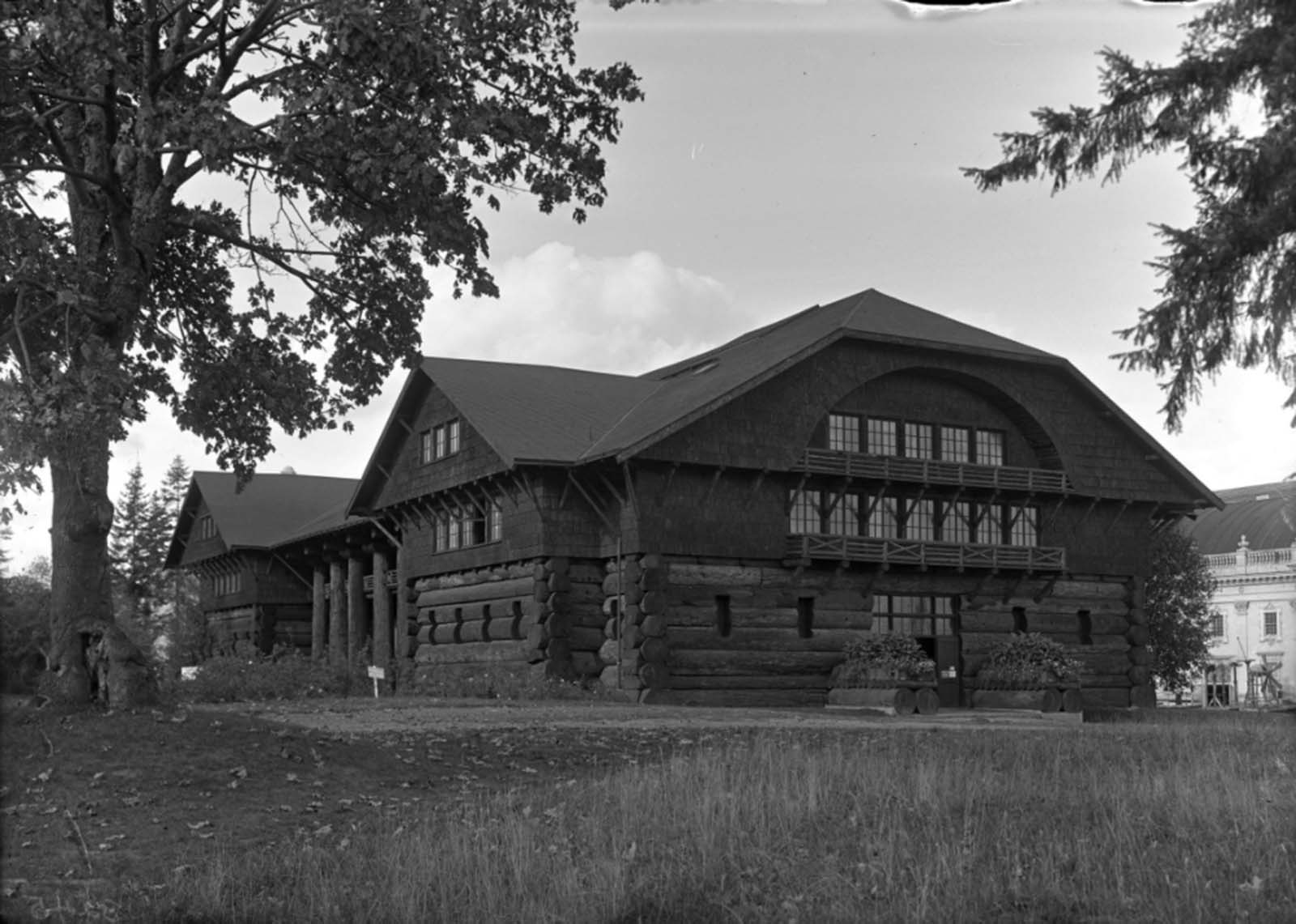 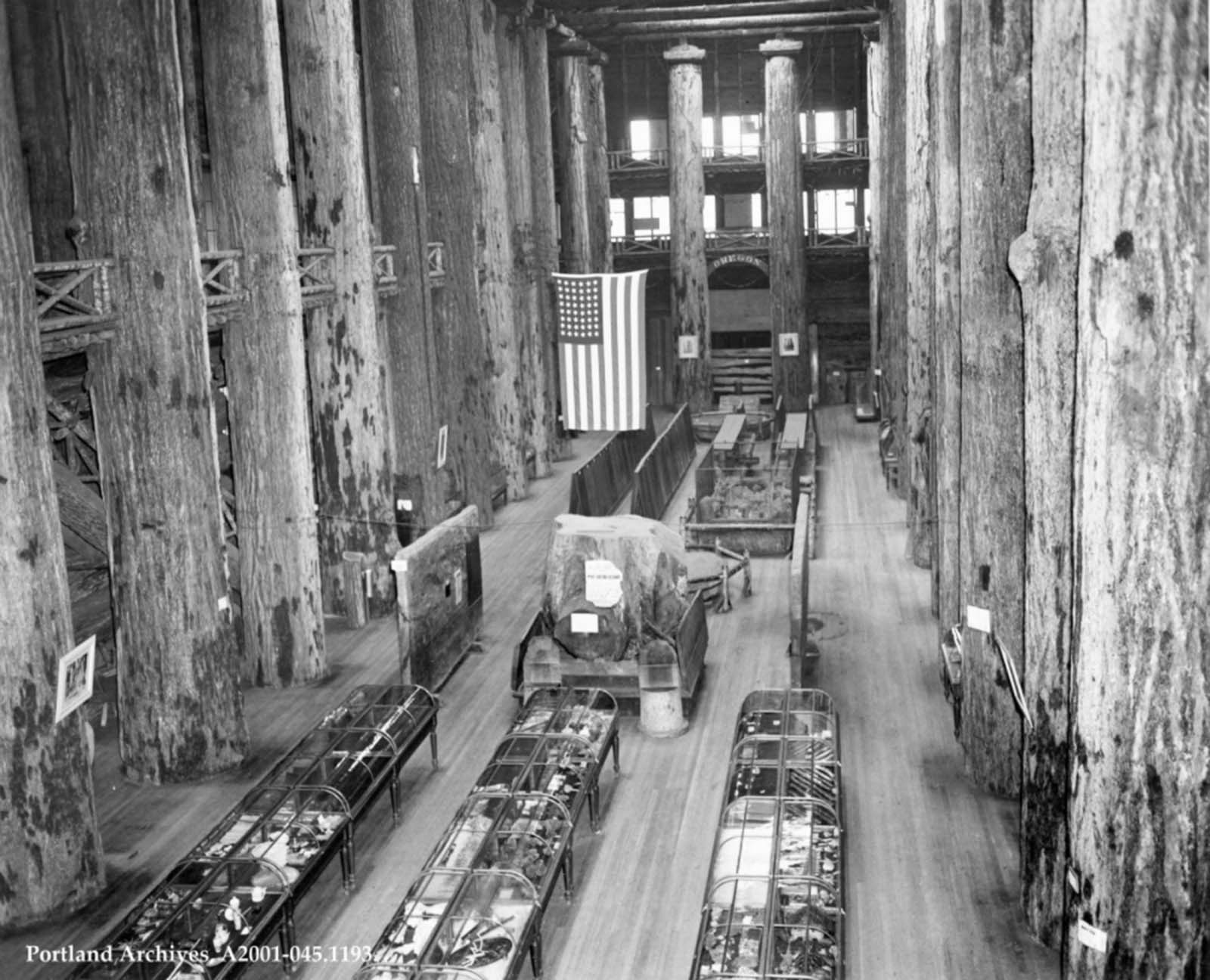 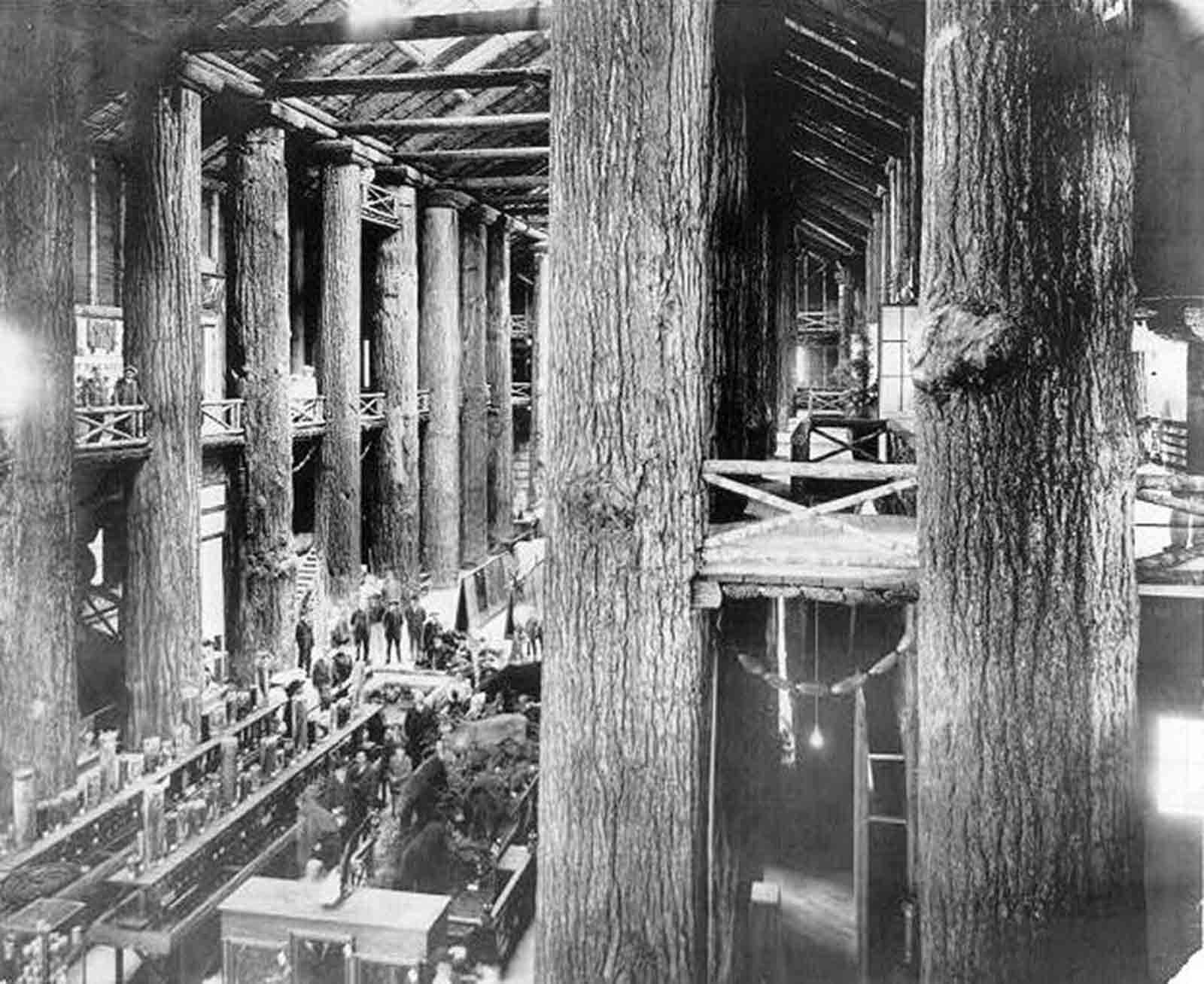 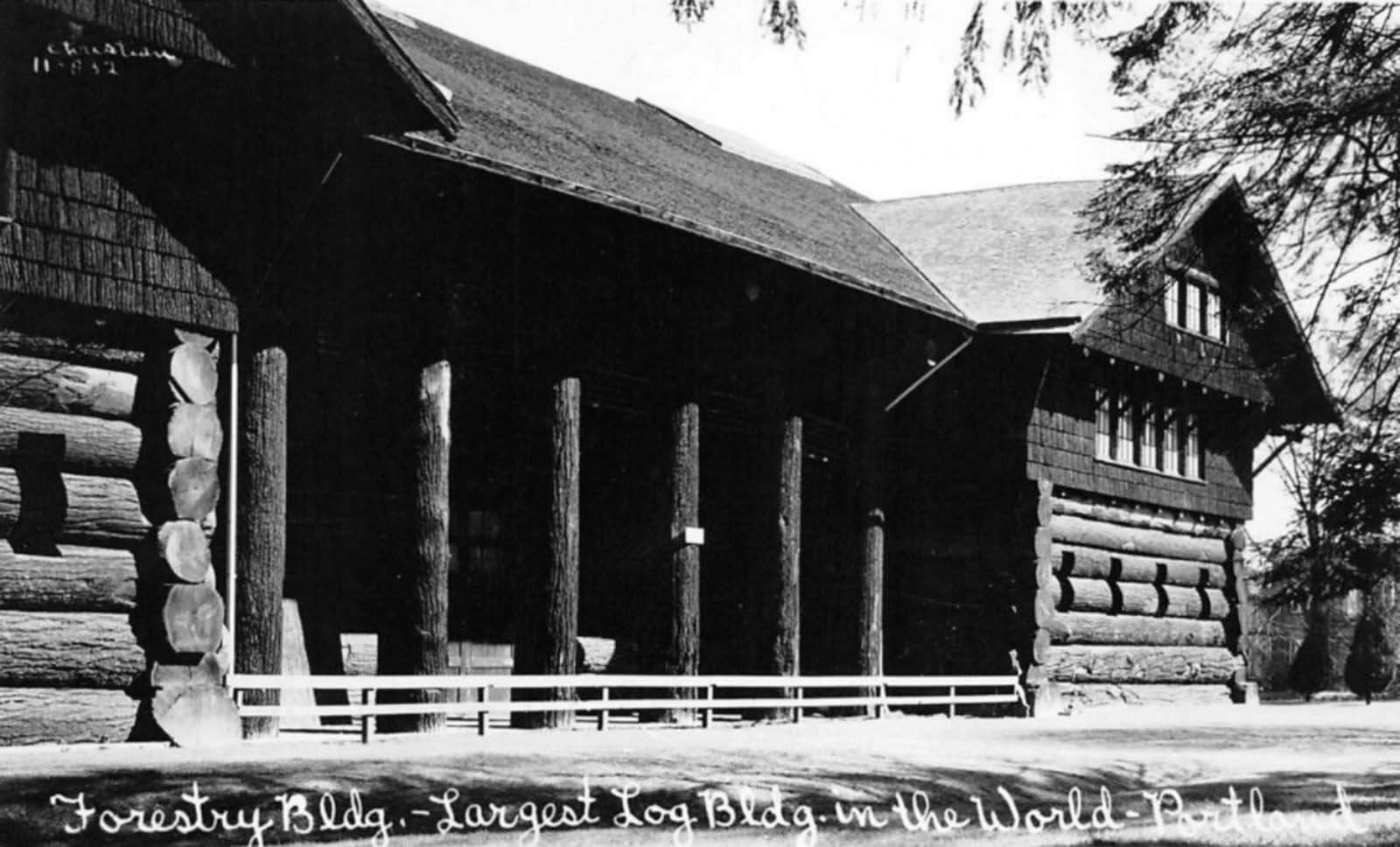 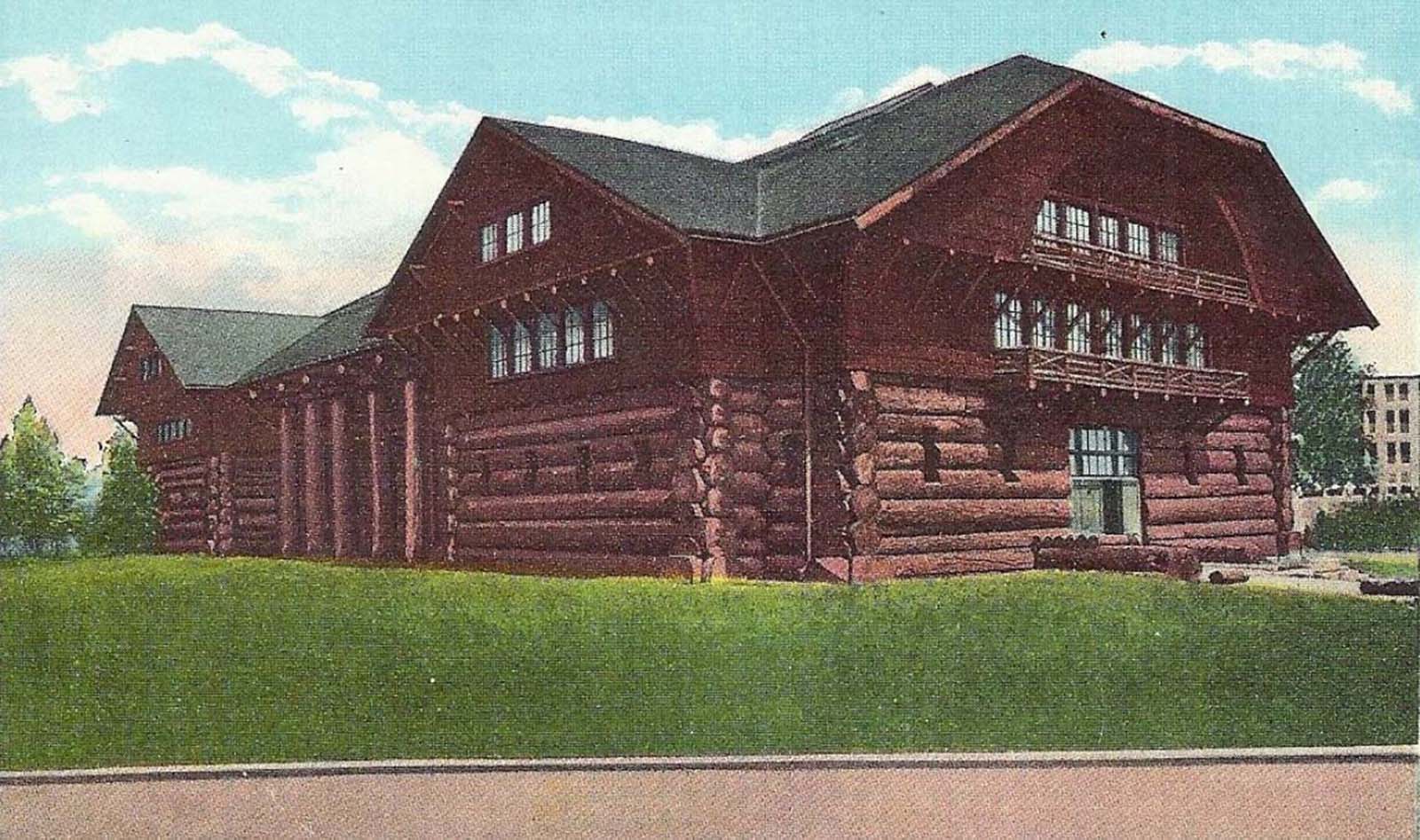 A vintage postcard of the Forestry Building. 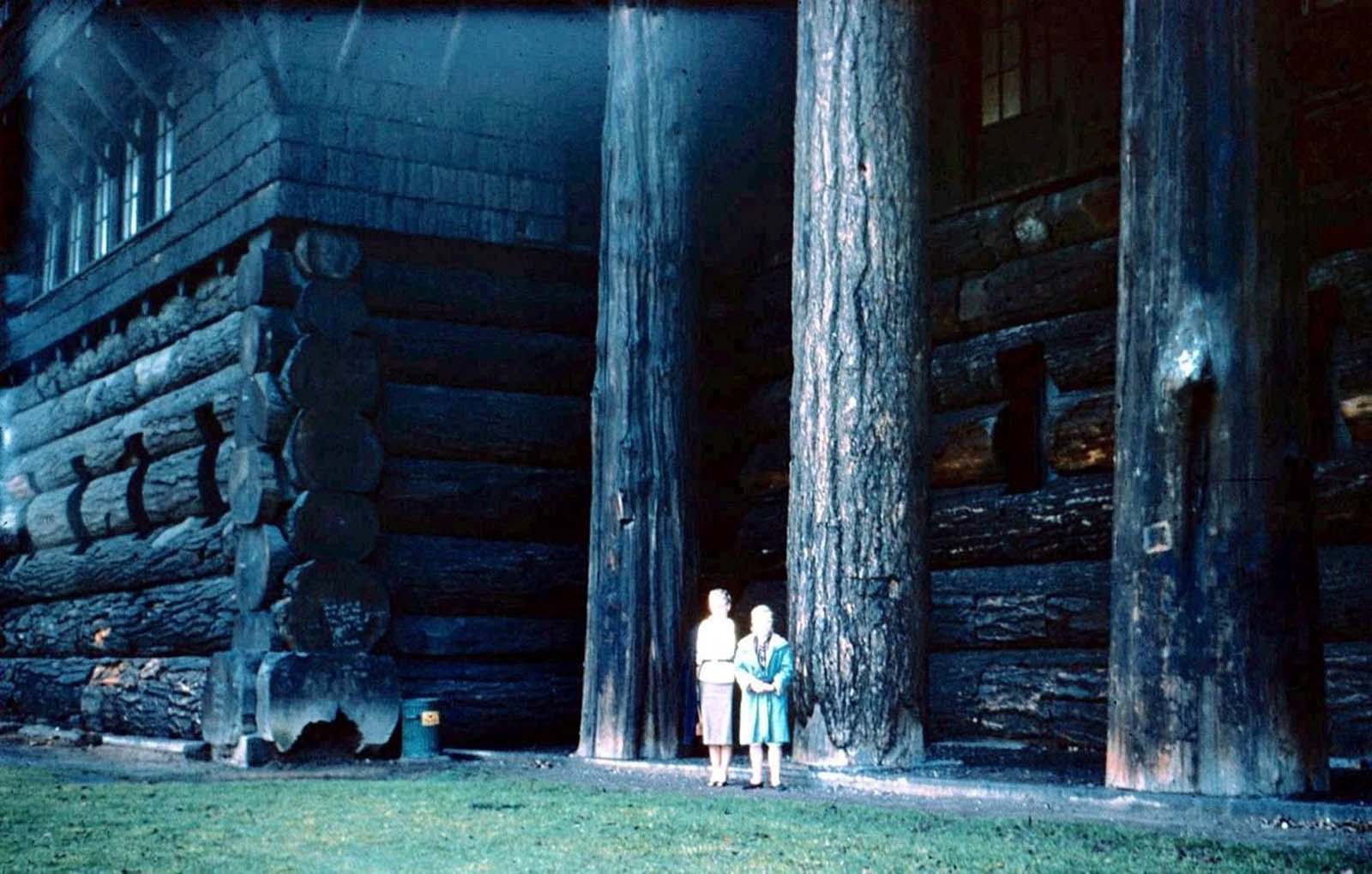 The Forestry Building in Portland, 1959. 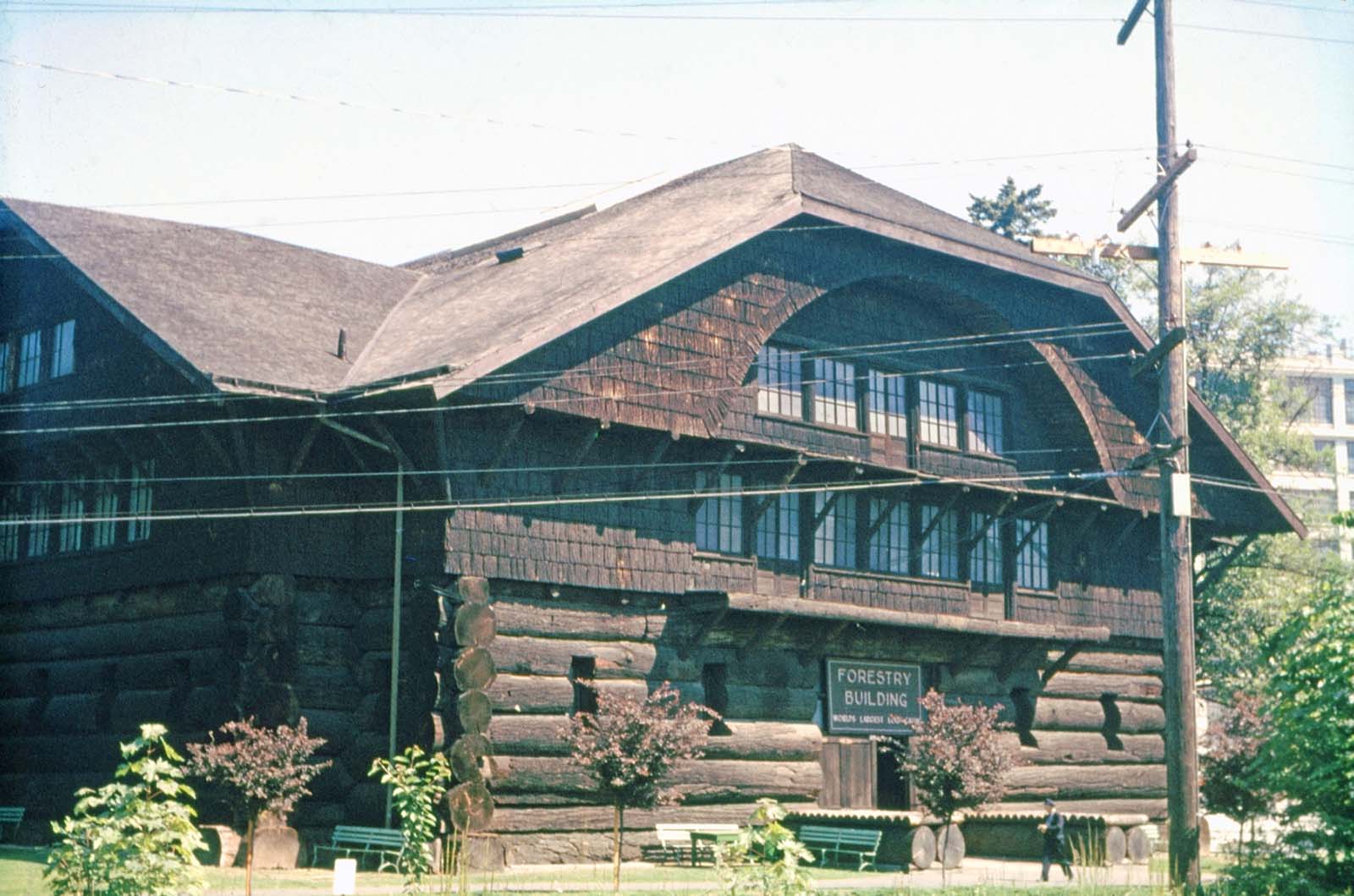 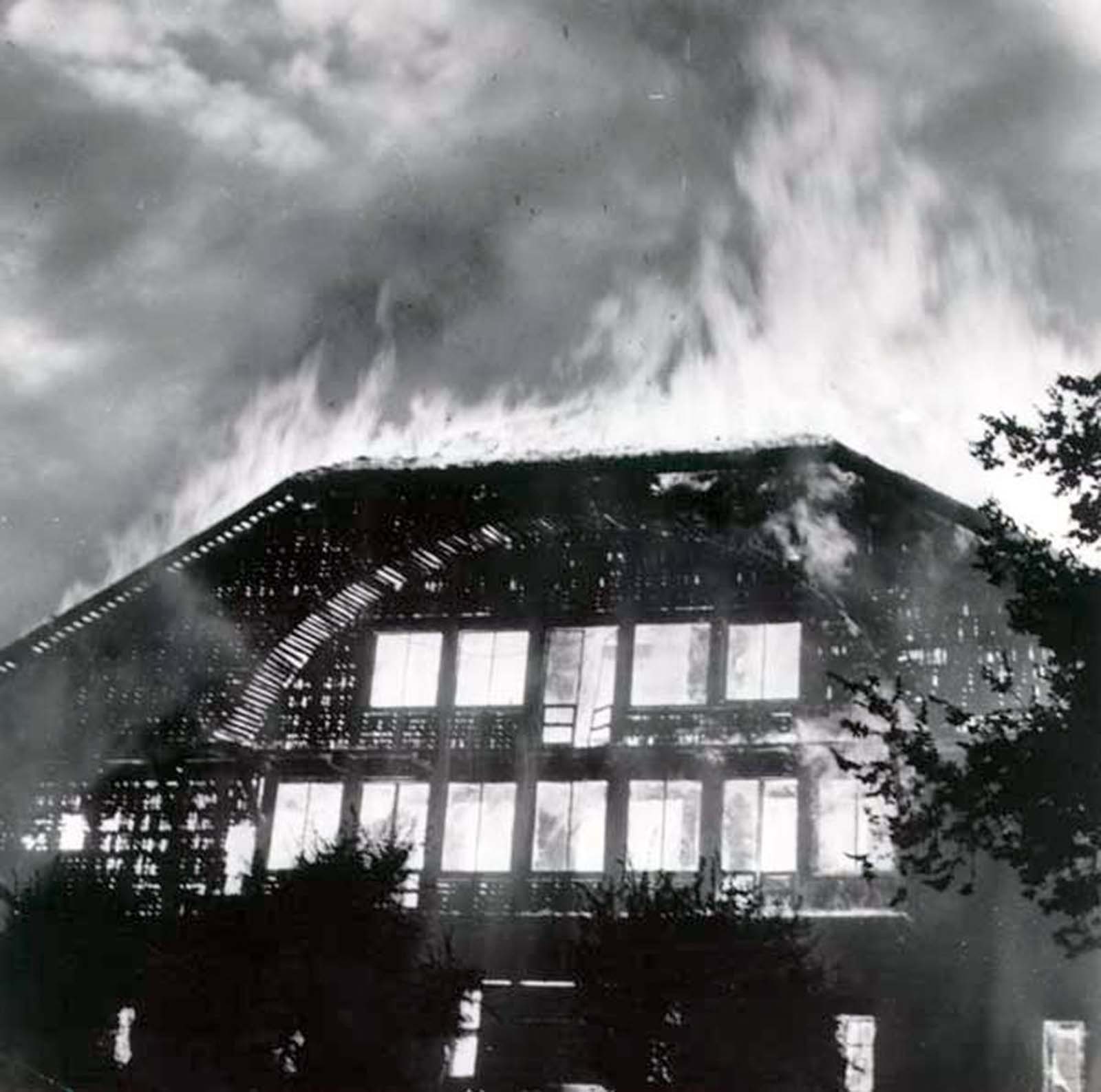 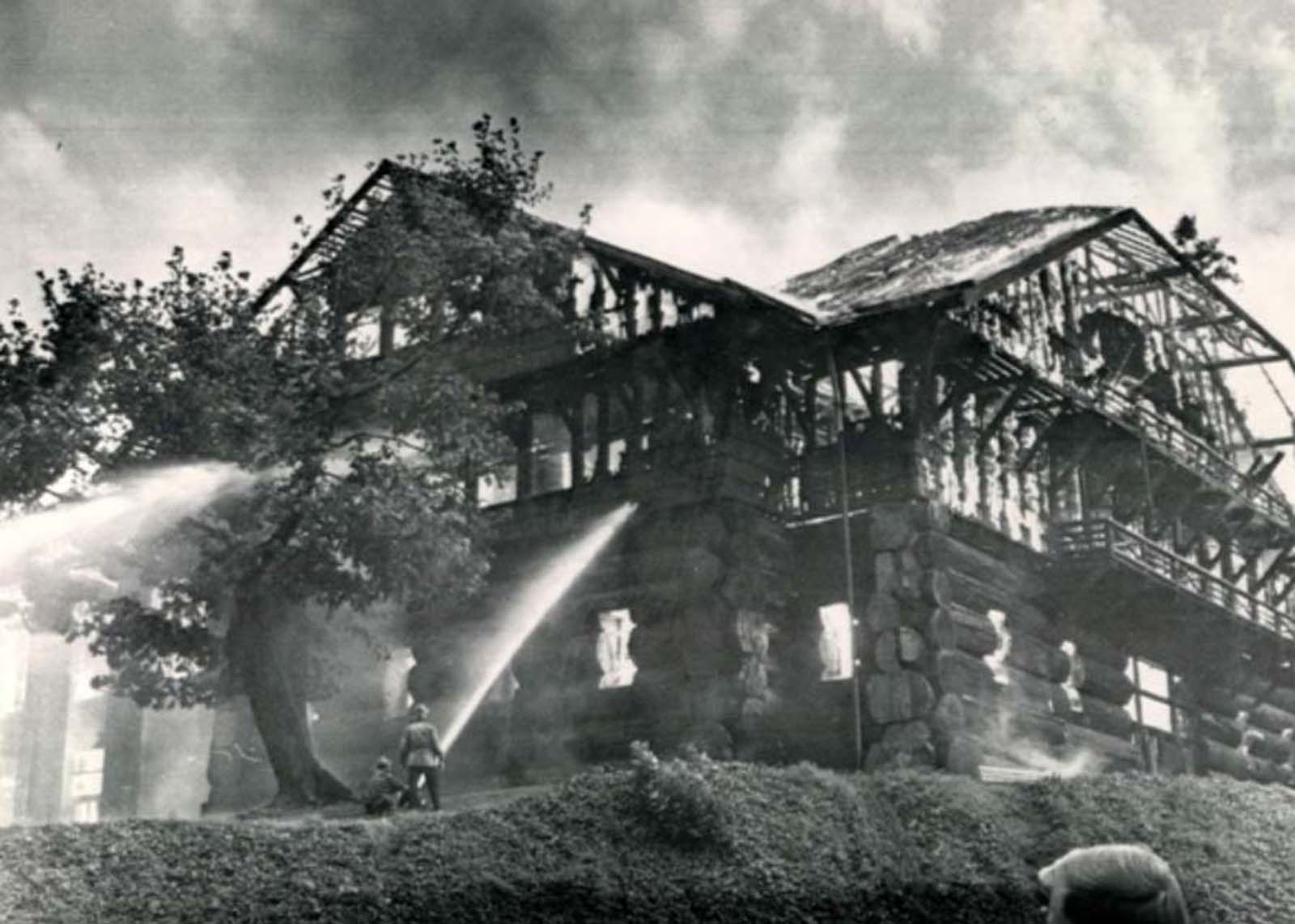 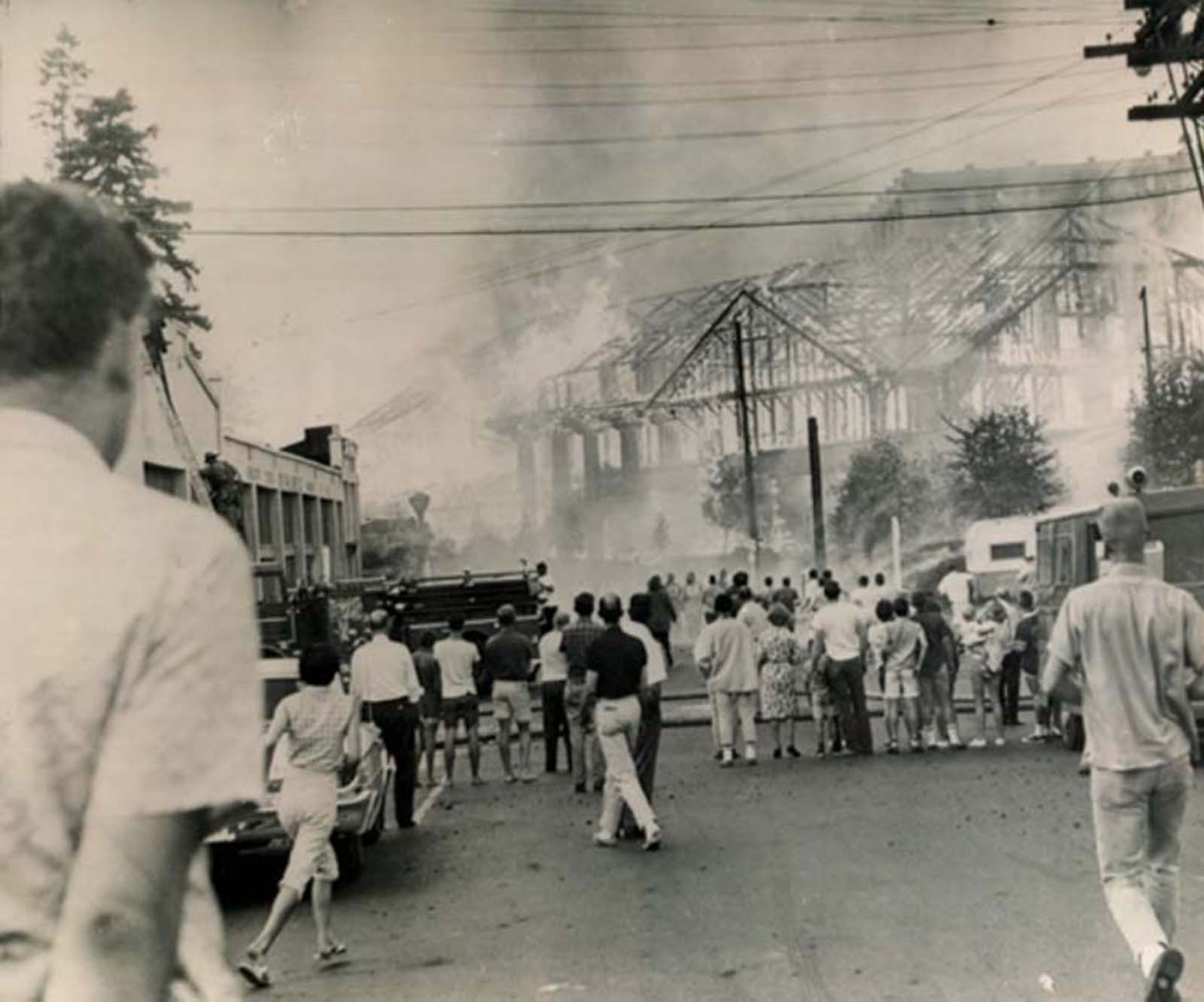