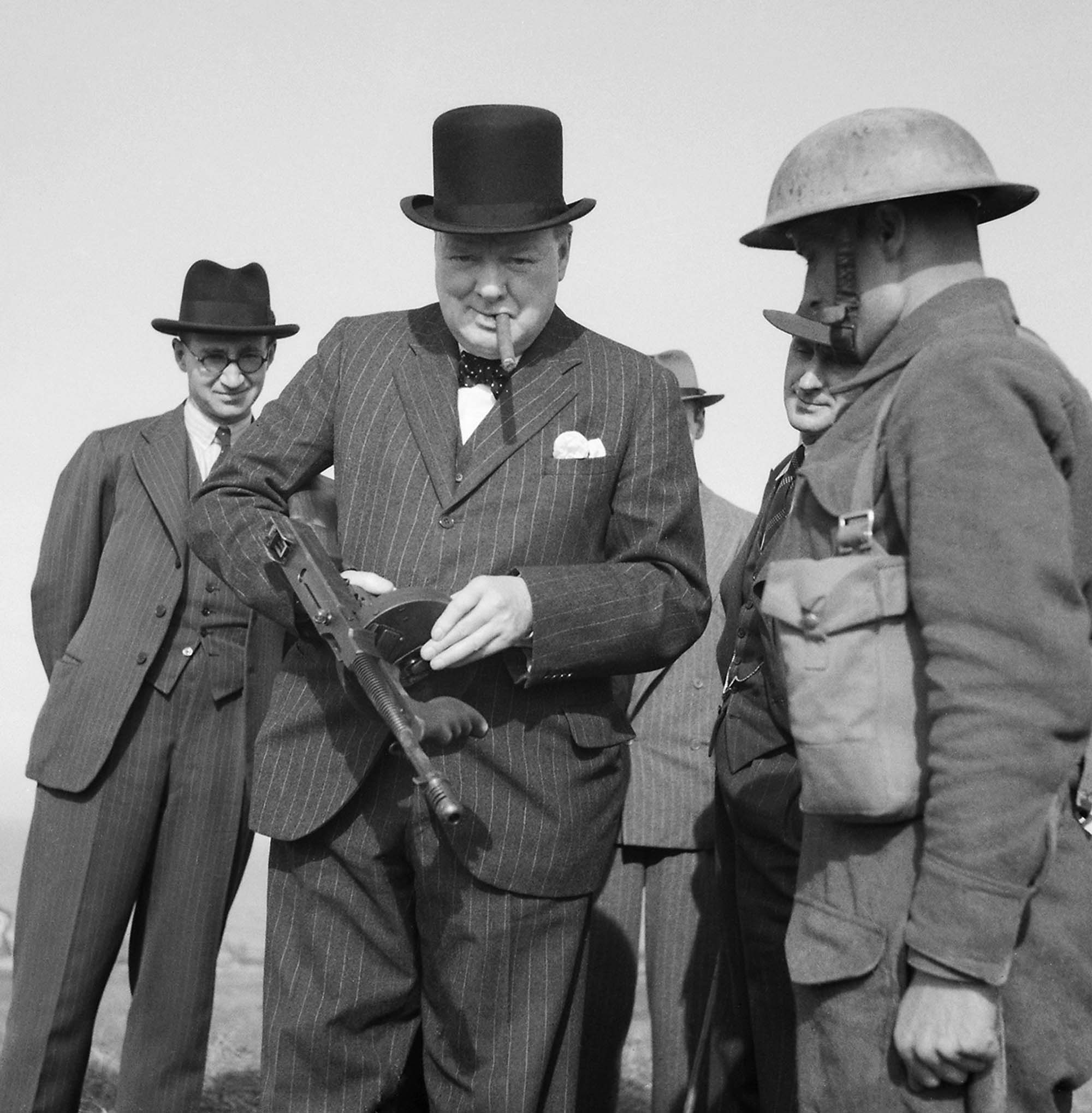 Winston Churchill with a Tommy Gun during an inspection near Hartlepool, 1940.

The short-barreled version of the Thompson was Winston’s personal favorite weapon of all time. He looks like a gangster from an old Hollywood movie. This photo was taken during an inspection of invasion defenses near Hartlepool, on July 21, 1940. The interesting thing about this picture is that both the British and the Germans used it for propaganda purposes.

The British photoshopped some soldiers out of the frame to make him more statesmanlike, while the Germans depicted him as an American gangster or a criminal. It’s an example of how the media can change your outlook on the world.

Nazi propaganda minister Goebbels saw the image as a godsend and used it extensively domestically, with the other Axis countries, and even in airdrops over Britain during the Battle of Britain with the text in English “WANTED” and at the bottom: “for incitement to MURDER.”

The reverse of the leaflet is all text: This gangster, who you see in his element in the picture, incites you by his example to participate in a form of warfare in which women, children, and ordinary citizens shall take the leading parts. This absolutely criminal form of warfare which is forbidden by the Hague Convention will be punished according to military law. Save at least your own families from the horrors of war!

Trying to pass on his never-give-up attitude he sought to back up British morale with some public tours of the British coastal defenses. During one of these tours, he was photographed trying out an American 1928 Tommy Gun or Thompson SMG (submachine gun) at defense fortifications near Hartlepool in Northern England.

Britain purchased quantities of the M1928 Thompson, which were delivered with the drum magazine but soon it was discovered to weigh too much, was cumbersome to load and it rattled too much in use, so thousands were returned to the manufacturer and exchanged for stick mags.

The Thompson became a favorite with combat unit squad leaders, mostly sergeants, and seems a bit more common to see in airborne and ranger outfits.

It was not always a standard-issue weapon but appears it was often picked up by scrounging. Officers came to prefer the then-newly issued M-1 Carbine because it was lighter and “sexier” back then and in some ways was a more practical weapon for them.

Eventually, the M-3 and M-3A1 “Grease Gun” replaced the Thompson in most applications, being lighter and much easier to stow in a vehicle or tank.

Most new tanks had at least one Thompson or Grease Gun issued with them, or at least had provision for them; it was intended for security when the crew dismounted from the tank, e.g. when gassing up or replenishing ammo, or in an event, the crew had to bail. There was usually a ground tripod provided in the tanks to mate up with one of the .30 cal machine guns, also for dismounted use.

Some facts about the Tommy Gun

General John T. Thompson, a graduate of West Point, began his research in 1915 for an automatic weapon to supply the American military. World War I was dragging on and casualties were mounting.

Having served in the Army’s ordnance supplies and logistics, General Thompson understood that greater firepower was needed to end the war.

Thompson was driven to create a lightweight, fully automatic firearm that would be effective against the contemporary machine gun. His idea was “a one-man, handheld machine gun. A trench broom”.

The first shipment of Thompson prototypes arrived on the dock in New York for shipment to Europe on November 11, 1918, the day that the war ended.

In 1919, Thompson directed Auto Ordnance to modify the gun for nonmilitary use. The gun, classified a “submachine gun” to denote a small, hand-held, fully automatic firearm chambered for pistol ammunition, was officially named the “Thompson submachine gun” to honor the man most responsible for its creation.