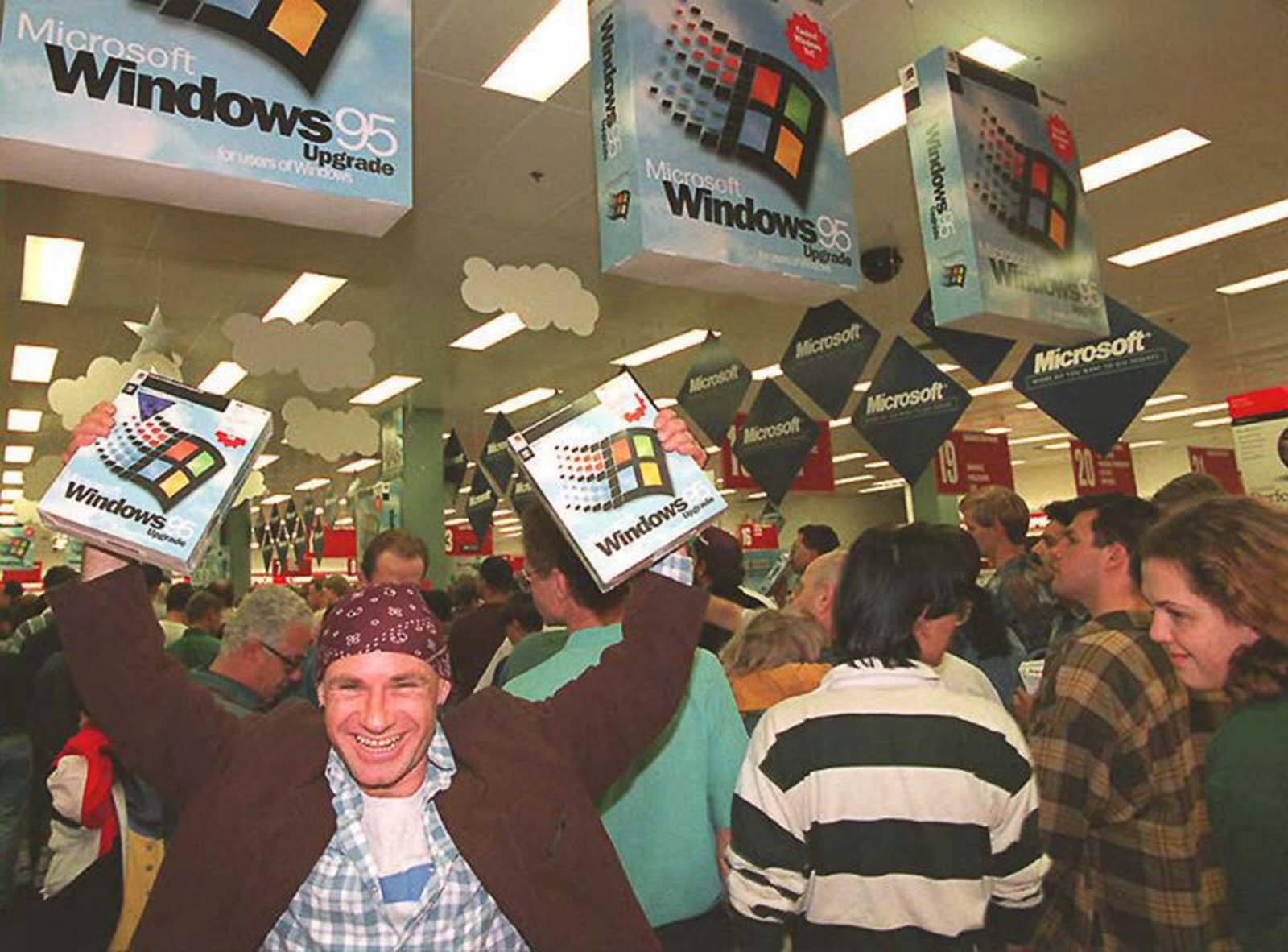 Mikol Furneaux waves two copies of Windows 95 at a midnight launch at a store in Sydney, Australia.

On Aug. 24, 1995, Microsoft—at that time a tech company with around $6 billion in sales and 17,800 employees—introduced their newest operating system, a product the New York Times at that time called “the splashiest, most frenzied, most expensive introduction of a computer product in the industry’s history.”

Windows 95 had a few notable add-ons, not least being the now-famous Start menu, a feature so significant that the company dedicated its launch ad to it. In addition to the Start button, Windows 95 introduced the taskbar, and added support for filenames up to 250 characters (a thrilling feature at the time) and “Plug and Play” support for installing new hardware.

The launch was hyped by a $300 million marketing campaign, including a “cyber sitcom” showing off the new features. Friends stars Jennifer Aniston and Matthew Perry made cameos. In 1995, computers were still mostly for the office and productivity. But Windows 95 brought with it a word that consumers understood: “Start.” Start what? Start anything.

There was also built-in, broad support for multimedia, which helped propel an explosion of CD-ROM titles. Gates and Microsoft designed Windows to be as consumer-friendly as possible (for the time) and made sure the launch event had crossover appeal — a first for a tech event. 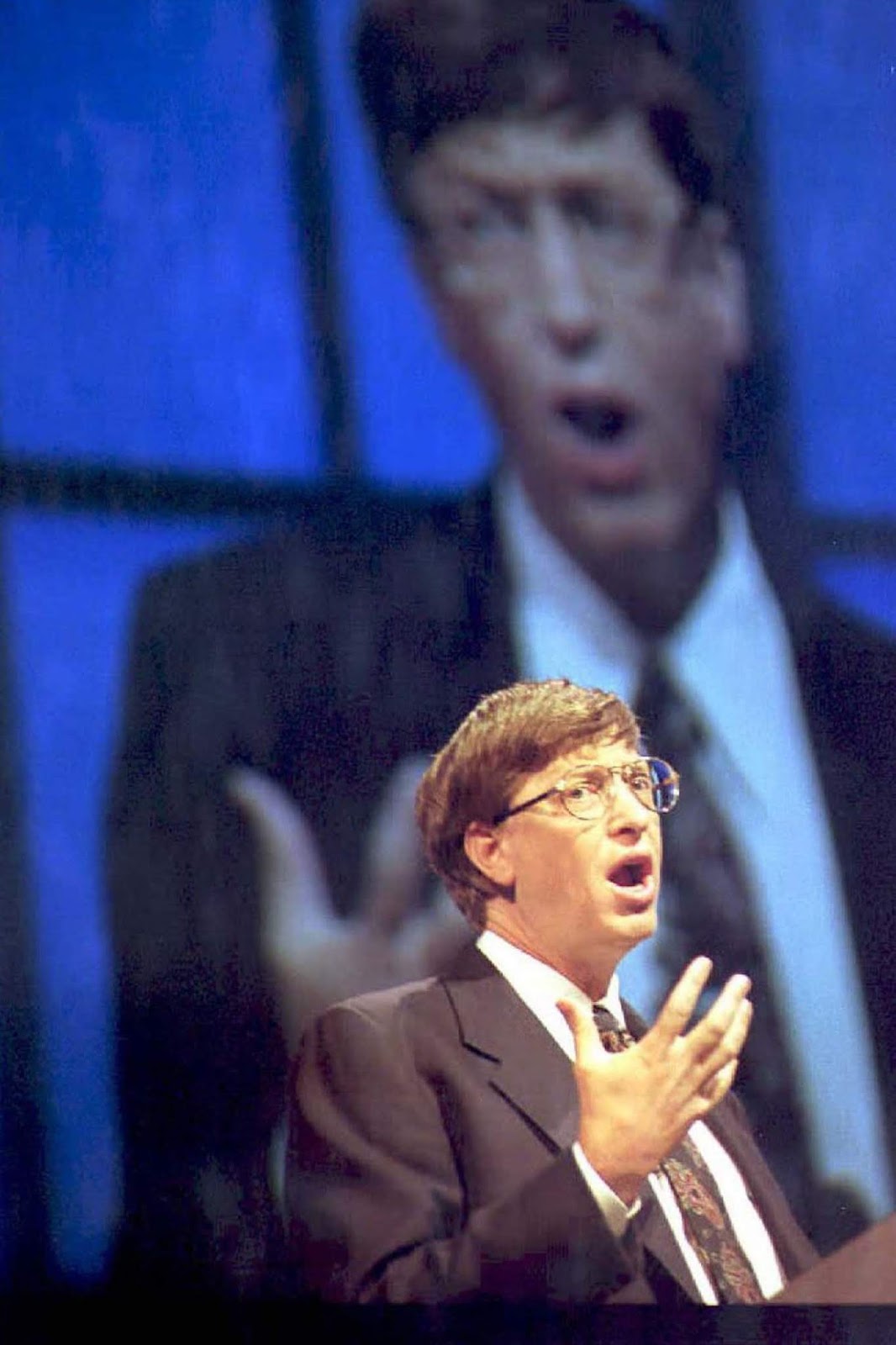 Many electronics stores held midnight launches for the product, with thousands of people waiting in line to be the first to get their hands on the operating system.

The release was a tremendous success. Microsoft sold 7 million copies in the first five weeks, and Windows 95 was soon the most popular operating system on the market.

The event put not only Windows 95 and operating systems on the map, but it also turned Microsoft into a brand name like General Mills and Ford and shone a bright, international spotlight on the company’s somewhat nerdy and socially awkward CEO. Windows 95 is very likely the first major operating system most people of a certain age remember. 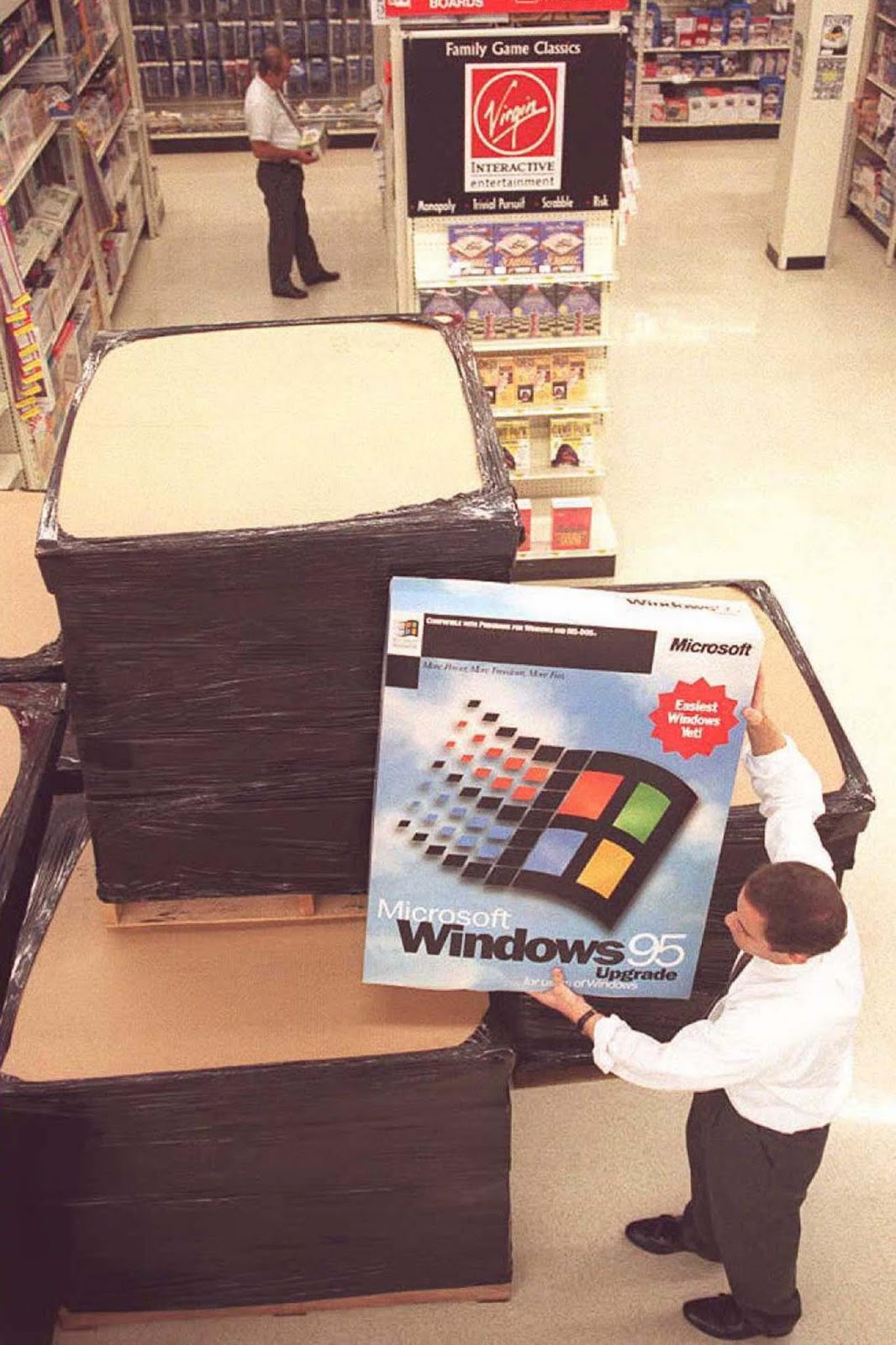 A manager assembles a Windows 95 display at Computer City in Vienna, Virginia. 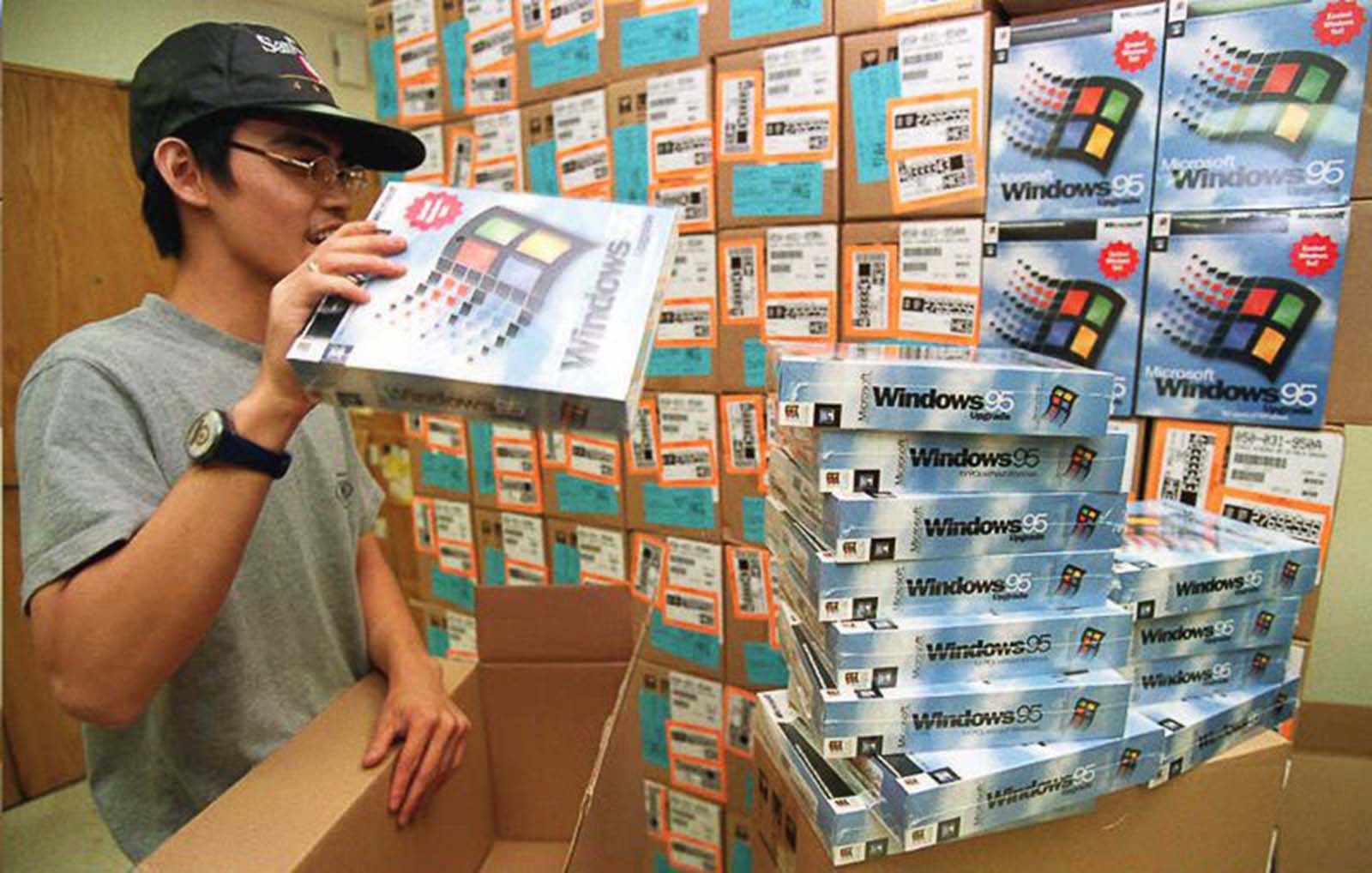 A wholesale distributor unpacks copies of Windows 95 in Hong Kong. 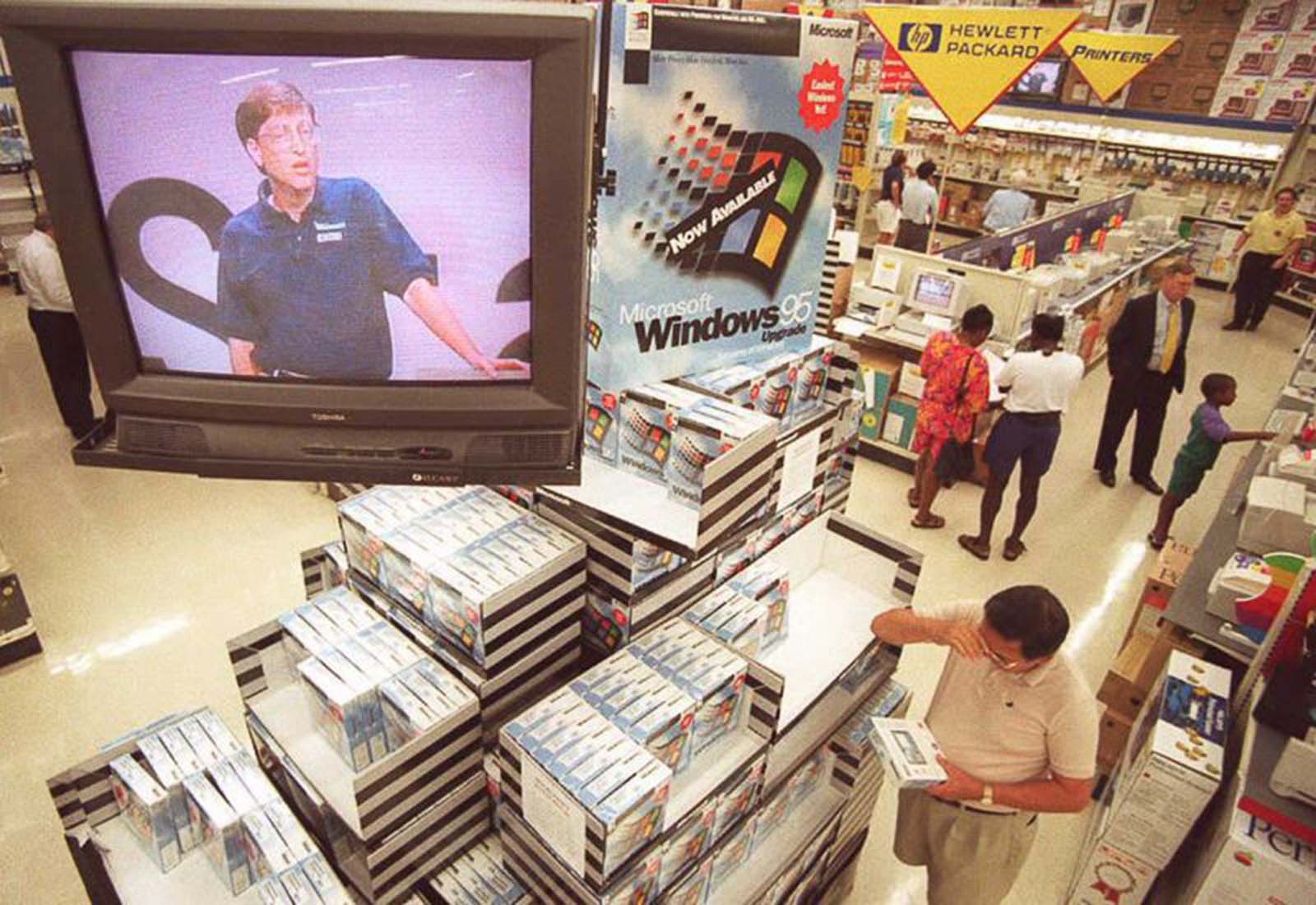 Microsoft CEO Bill Gates speaks on a television above a Windows 95 display at a store in Vienna, Virginia. 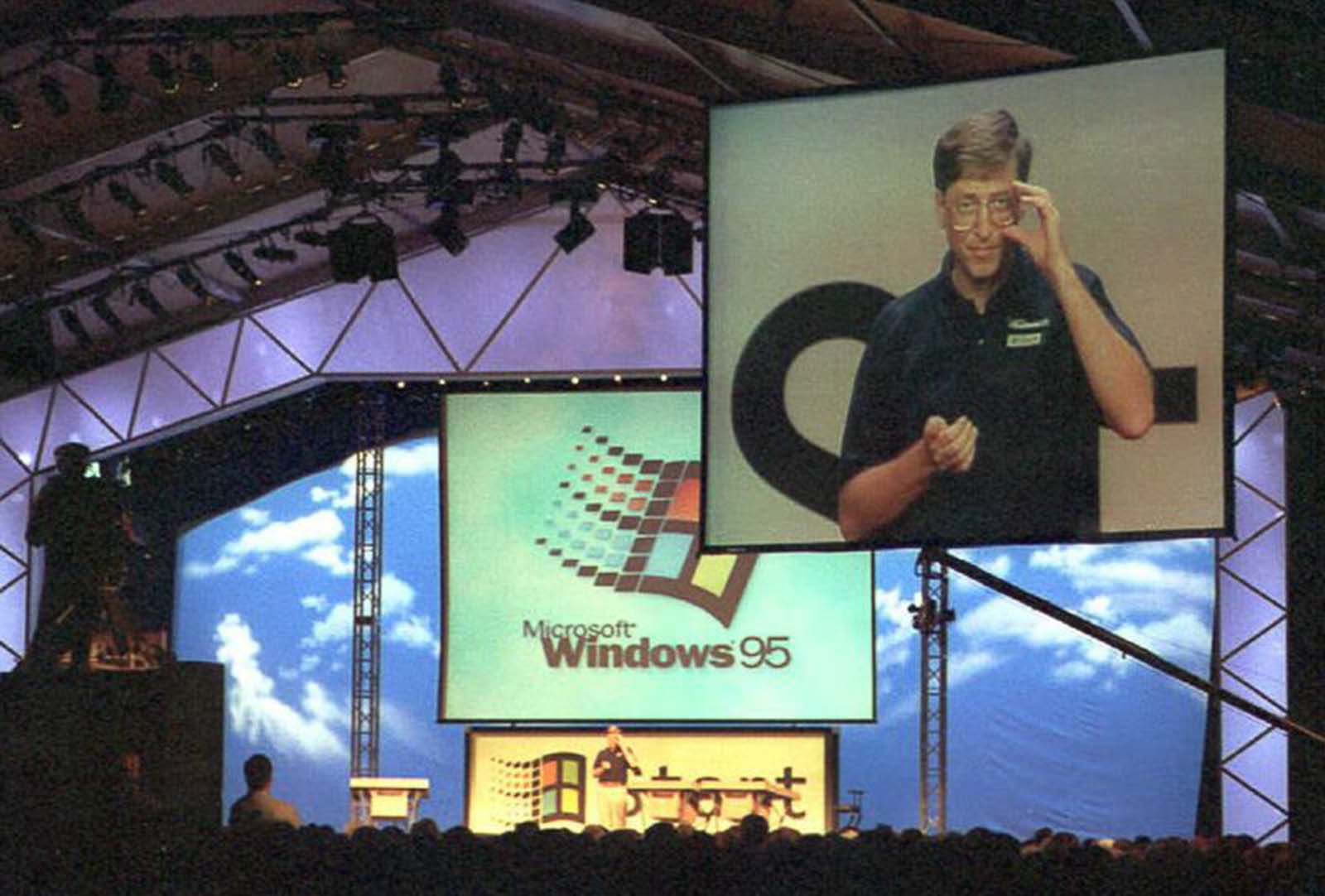 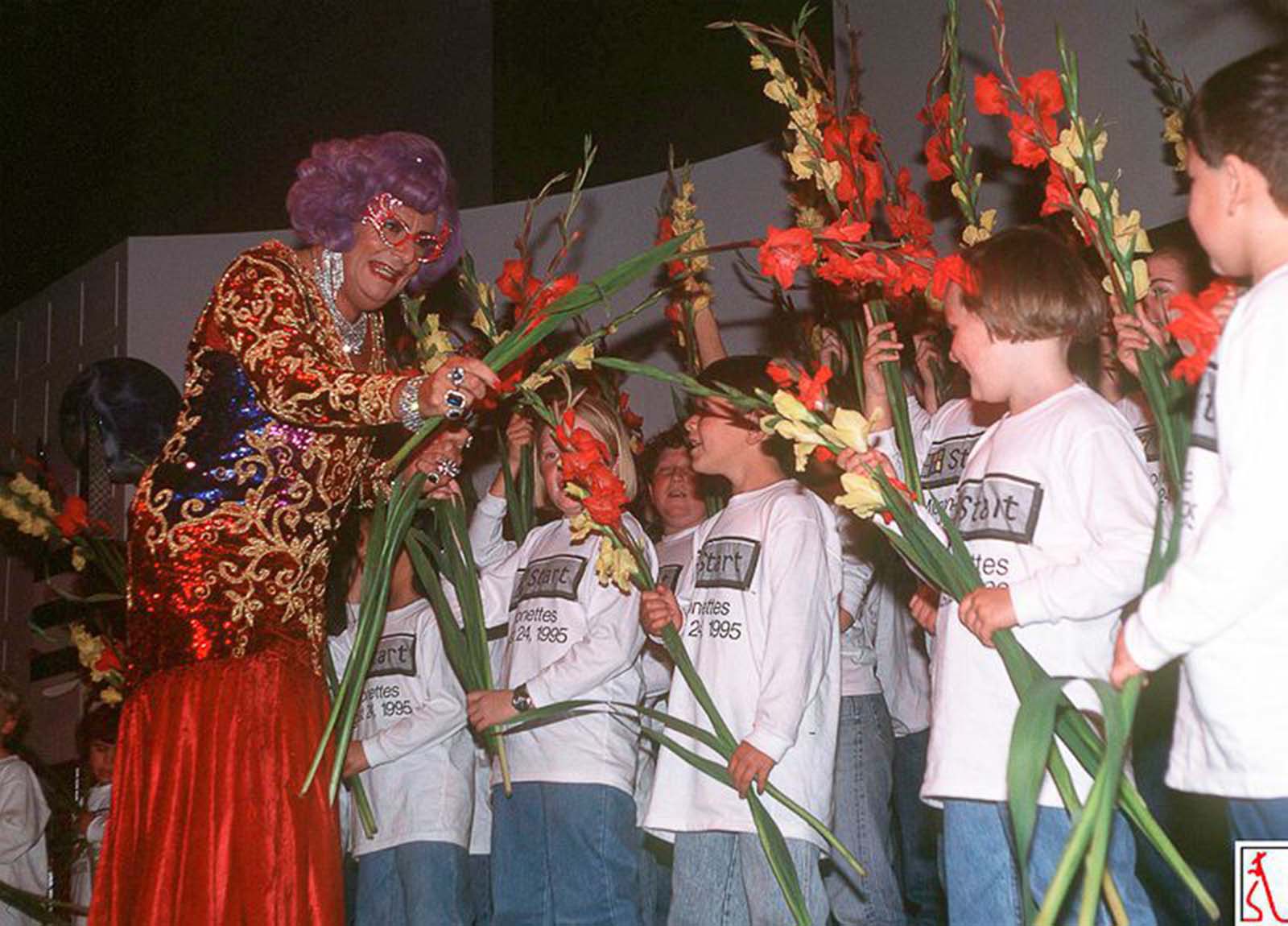 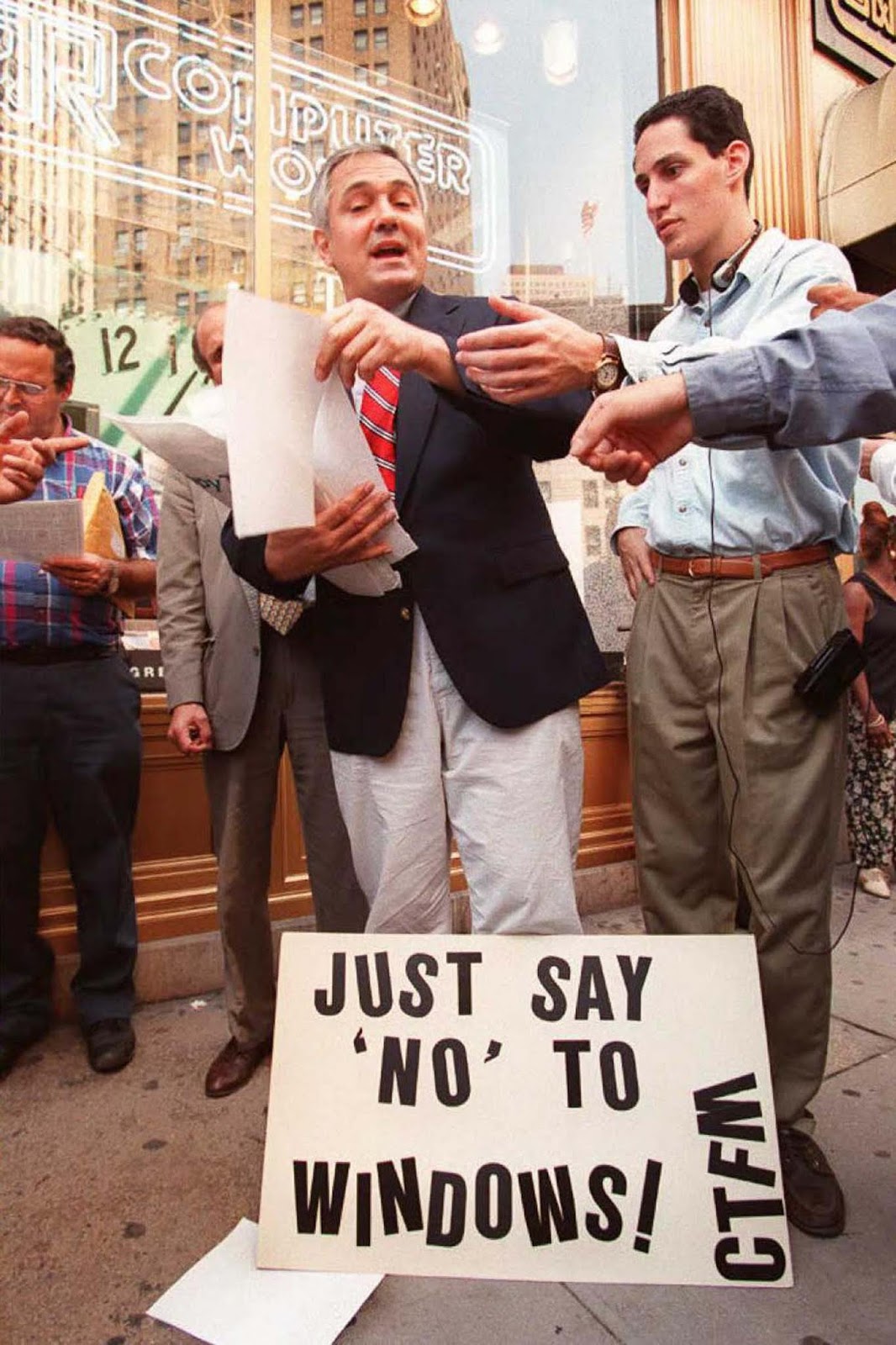 Anthony Martin of the Committee to Fight Microsoft Corp. distributes leaflets outside a downtown Manhattan computer store warning consumers not to purchase Windows 95, claiming that it is not an “upgrade” and will require consumers to purchase costly additional memory for their computers. 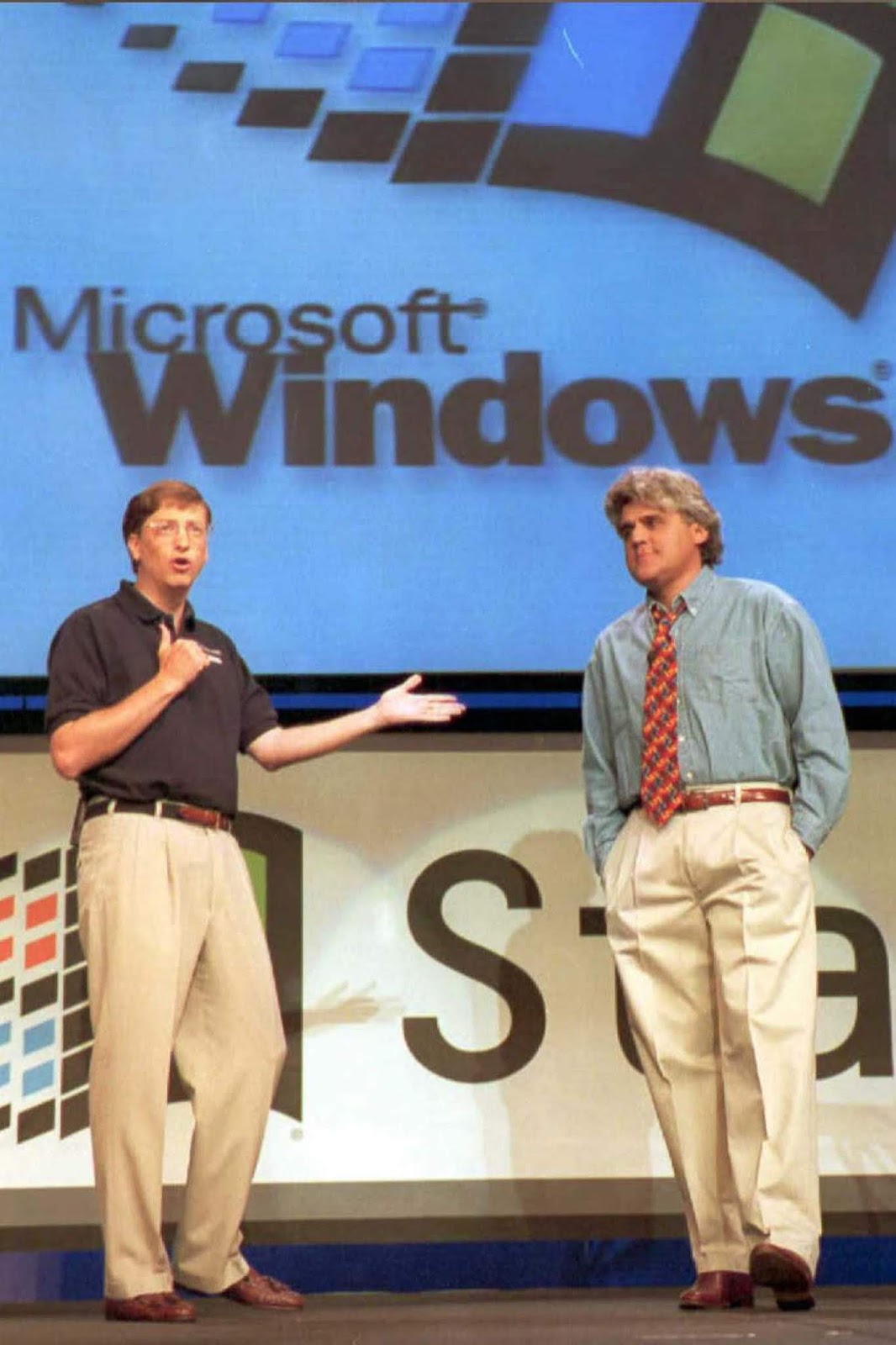 Bill Gates is joined by comedian Jay Leno at the Windows 95 kickoff event in Redmond, Washington. 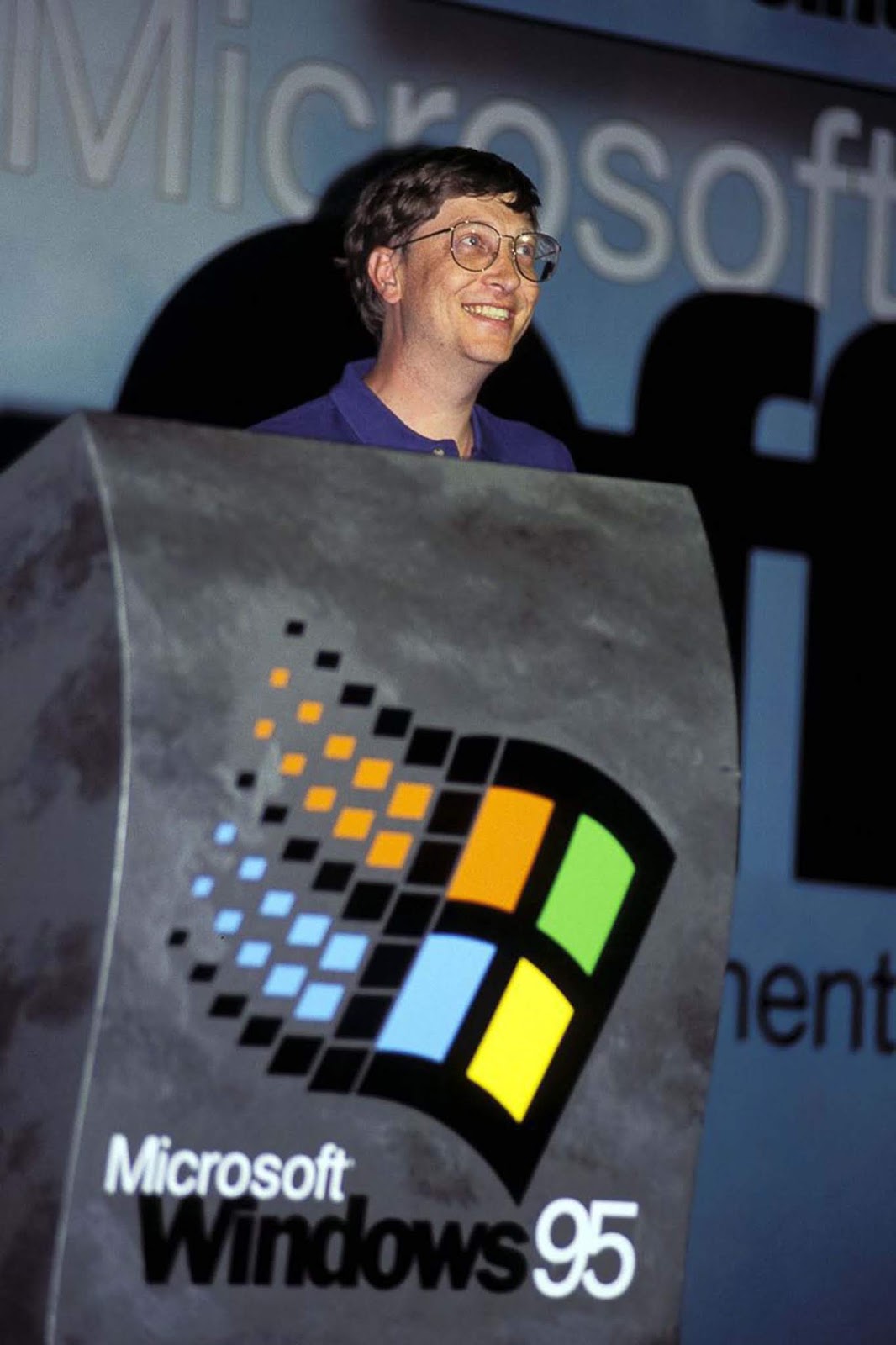 Bill Gates introduces Windows 95 at an event in Madrid, Spain. 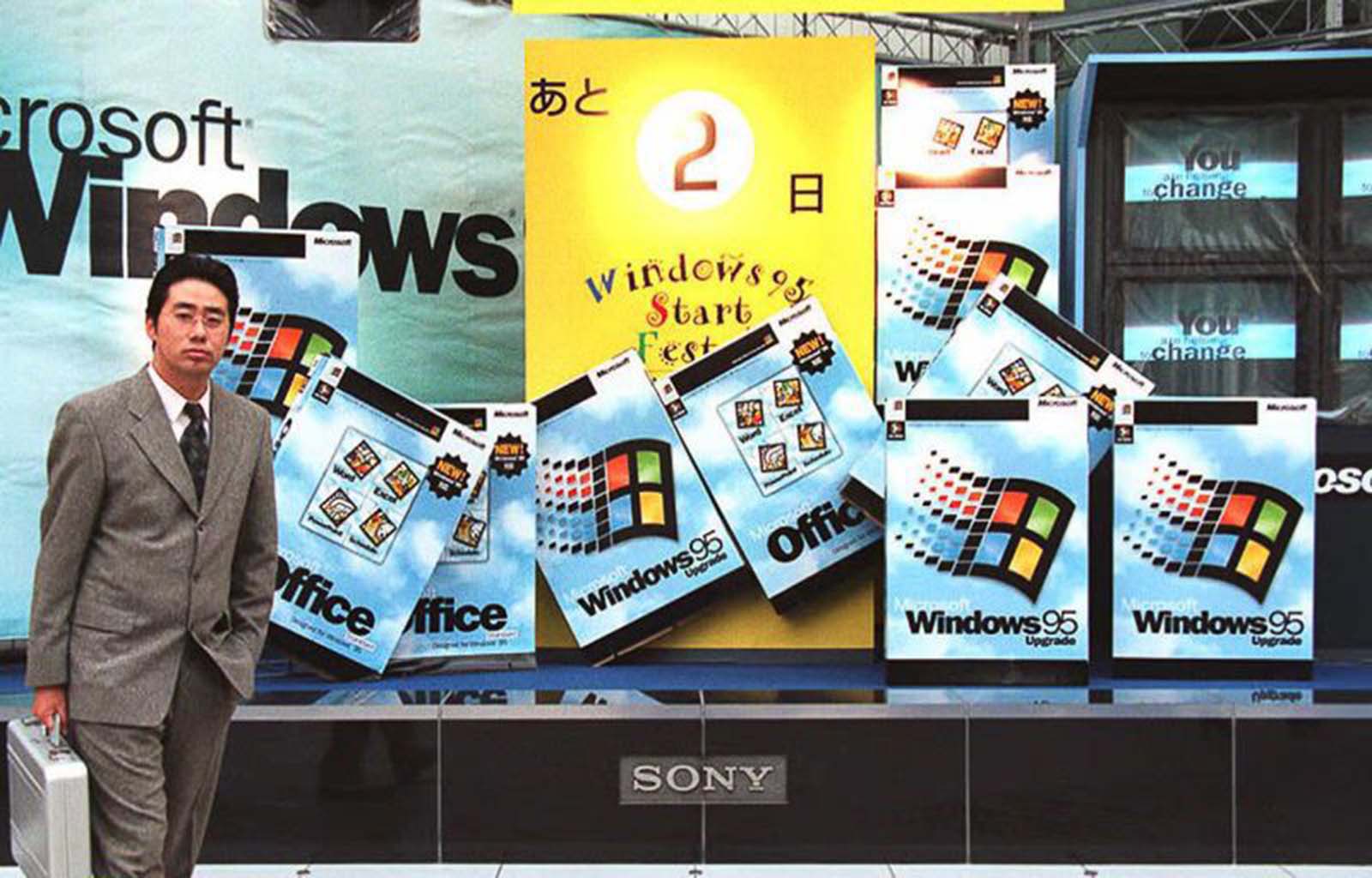 A Windows 95 display, two days before its Japanese language launch.