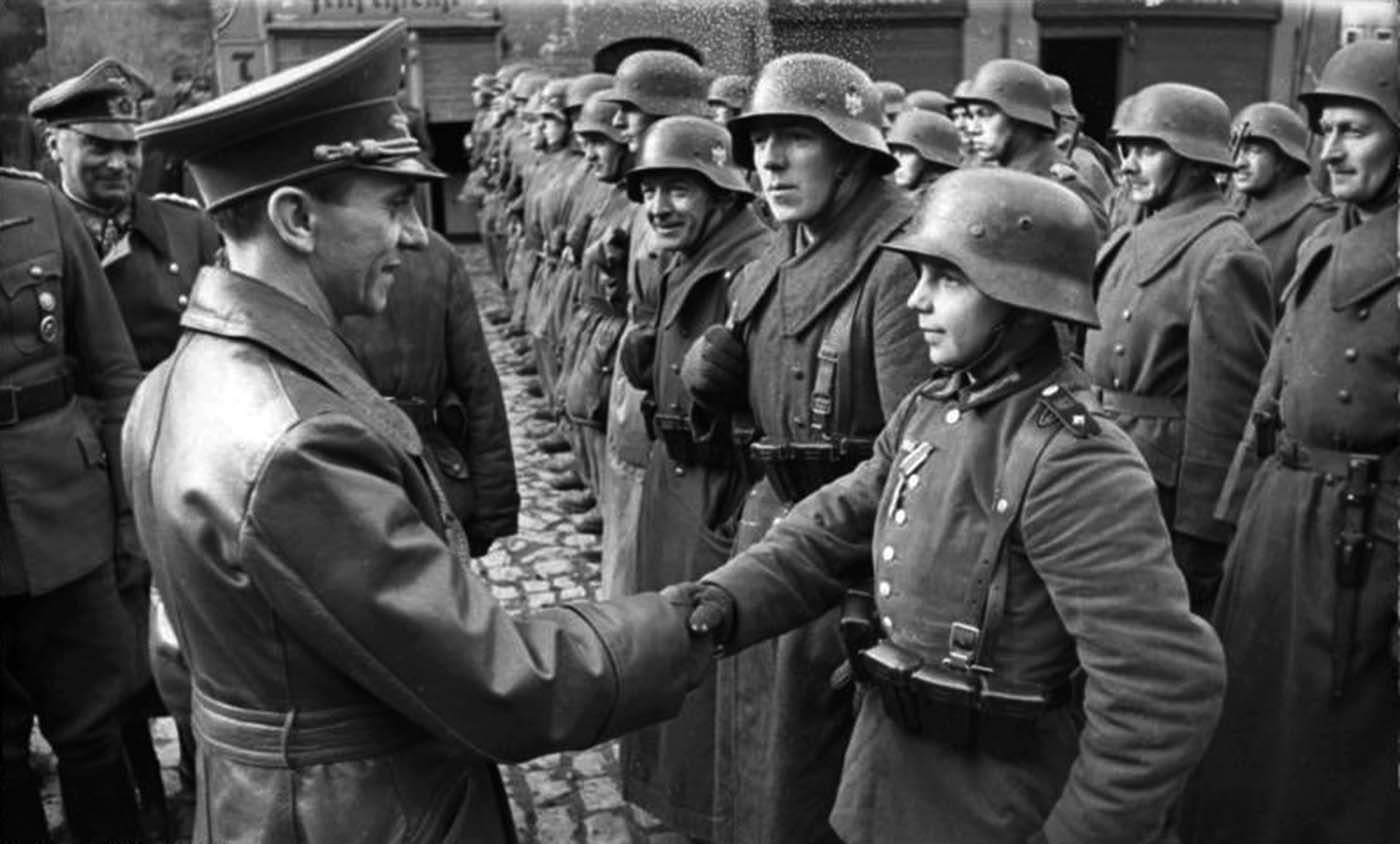 Dr. Goebbels, Reichsminister für Volksaufklärung und Propaganda (Reich Minister of Public Enlightenment and Propaganda), visiting Lauban shortly after the liberation with the camera crews of the Wochenschau. Here he is seen congratulating the 16-year-old Willi Hübner.

As casualties mounted during the Second World War, Germany was forced to call up ever-younger conscripts to fill the ranks of the Wehrmacht. So dire was the situation at the end of 1944, that boys born in 1928 were called up to serve the Fatherland.

They were 15 or 16 years old and had grown up in the shadow of Nazism. Each would have spent their teenage years in the Hitlerjugend (Hitler Youth) preparing them for military service.

The net result of this was a cadre of youths that grew up surrounded by Nazi propaganda and were called up to serve the Vaterland they had been raised and trained to defend.

In many cases, they fought bravely against overwhelming odds, but the lives of thousands of these youths were wasted by throwing them senselessly into battle with the Allies when the war was already lost.

After 8 days of fierce fighting, the town was secured, and cameras from Die Deutche Wochenschau were there to capitalize on this success for propaganda purposes.

Hübner was first awarded Eisernes Kreuz 2 Klasse (Iron Cross 2nd Class) by Reich Minister of Propaganda Joseph P. Goebbels in Lauban. At 16, he was one of the youngest recipients of the award. 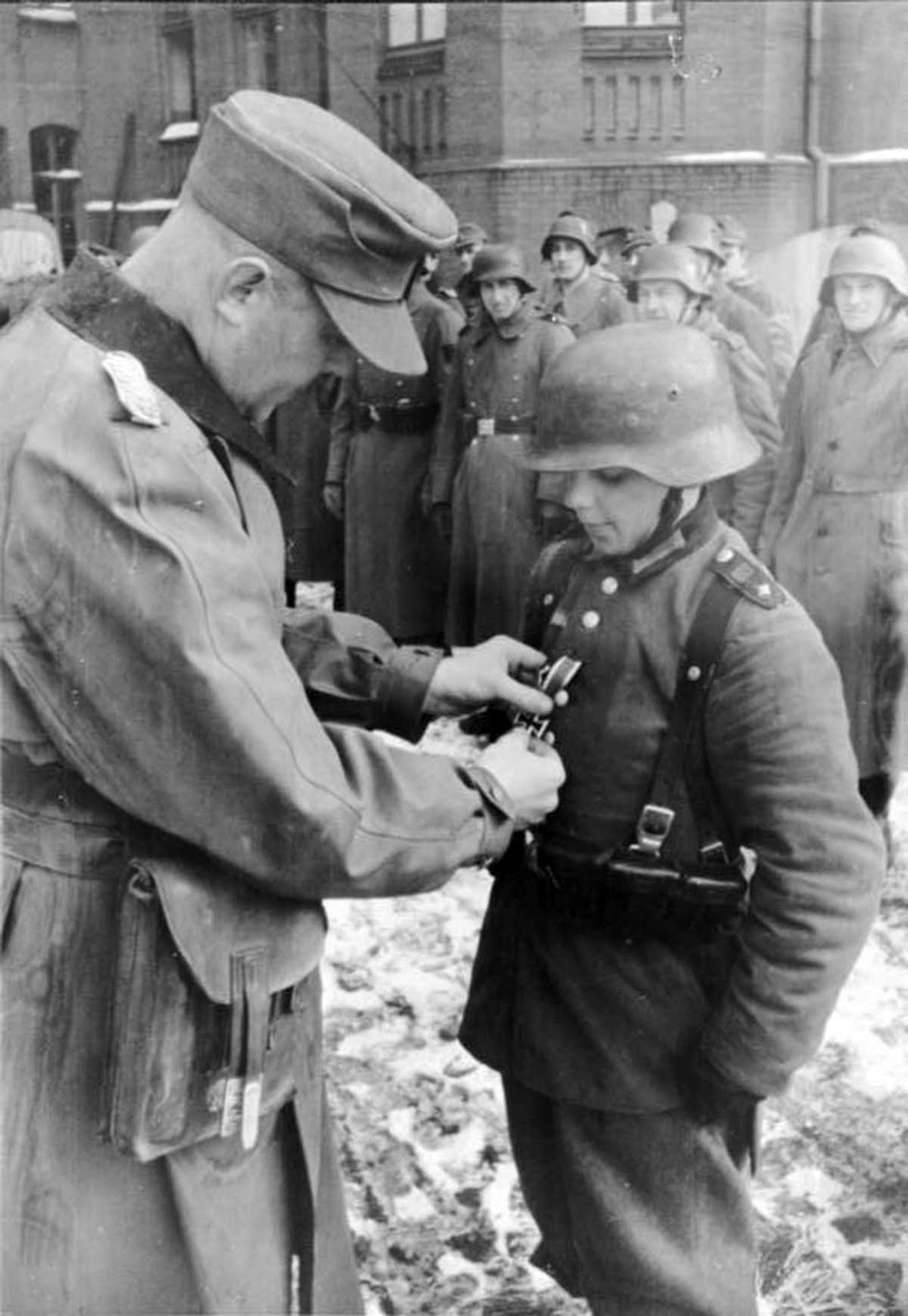 One day after he was flown to Berlin, given a new uniform, redecorated by Artur Axmann, and was told to wait to meet Hitler. On 20th March 1945, there was an award ceremony in the gardens of the Reichskanzlei in Berlin for members of the Hitlerjugend who had distinguished themselves in combat. The footage from this event is very famous, as is the last known footage of Hitler to be recorded.

Willi Hübner was compelled to tell his story for the cameras: “When the Russians were closing in on Lauban, I reported for voluntary duty as a messenger to the combat commander.

My job was to take dispatches to the individual command posts. I also frequently took provisions and panzerfausts (literally “tank fists” a disposable anti-tank weapon) up to the front line under fire. I carried the panzerfausts in a wheelbarrow under enemy fire”. 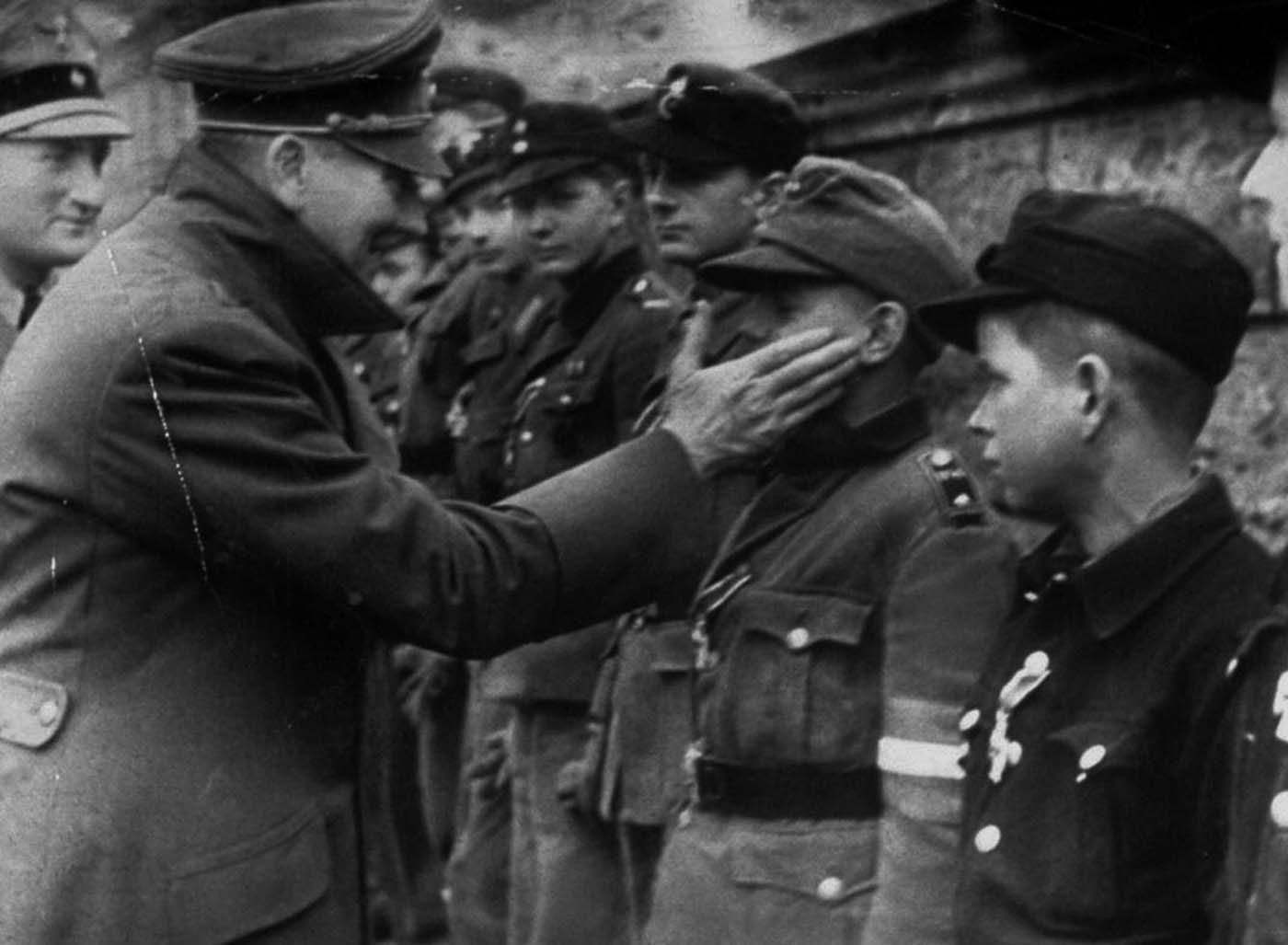 Adolf Hitler touches the face of Wilhelm “Willi” Hübner during an awards ceremony behind the Reich Chancellery on March 20, 1945. While they waited for Hitler, Axmann told them to be at ease and to not greet the Führer with the Nazi salute.

Willi Hübner (1929-April 12, 2010) survived the war and settled in Landshut, Bavaria, becoming a good engine mechanic. He was interviewed for several documentaries including ‘V Was for Victory’ and ‘The World at War’.