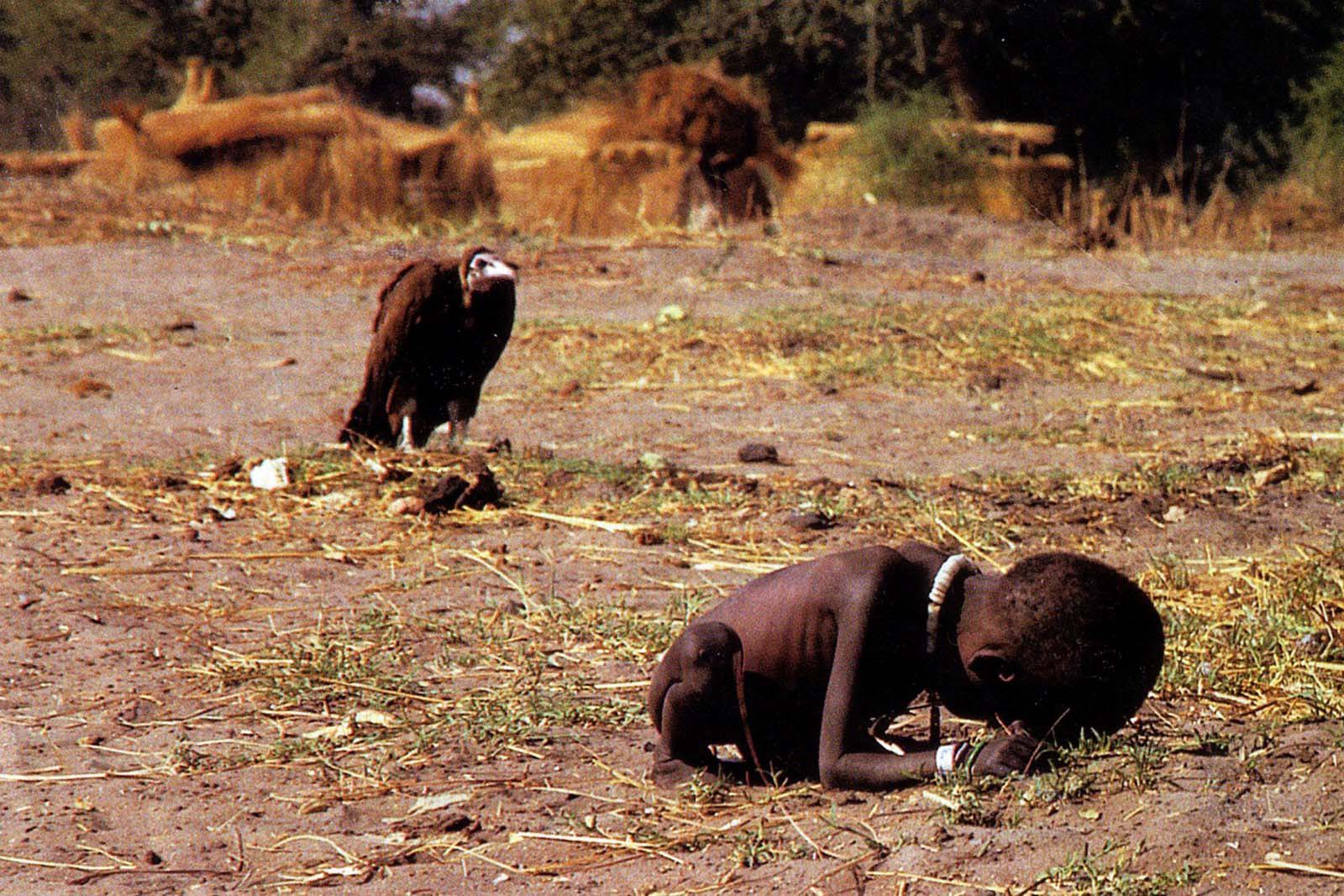 The vulture and the little girl, 1993. Original title: Struggling Girl.

The vulture is waiting for the girl to die and to eat her. The photograph was taken by South African photojournalist, Kevin Carter, while on assignment to Sudan. He took his own life a couple of months later due to depression.

In March 1993 Kevin Carter made a trip to Sudan. Near the village of Ayod, Carter found a girl who had stopped to rest while struggling to a United Nations feeding center, whereupon a vulture had landed nearby.

Careful not to disturb the bird, he waited for twenty minutes until the vulture was close enough, positioned himself for the best possible image, and only then chased the vulture away. At this point, Carter was probably not yet aware that he had shot one of the most controversial photographs in the history of photojournalism.

“The parents of the children were busy taking food from the plane, so they had left their children only briefly while they collected the food. This was the situation for the girl in the photo taken by Carter. A vulture landed behind the girl. To get the two in focus, Carter approached the scene very slowly so as not to scare the vulture away and took a photo from approximately 10 meters. He took a few more photos before chasing the bird away”.

The photograph was sold to The New York Times where it appeared for the first time on March 26, 1993. Practically overnight hundreds of people contacted the newspaper to ask whether the child had survived, leading the newspaper to run a special editor’s note saying the girl had enough strength to walk away from the vulture, but that her ultimate fate was unknown. Because of this, Carter was bombarded with questions about why he did not help the girl and only used her to take a photograph.

As with many dramatic photographs, Carter came under criticism for this shot. The St. Petersburg Times in Florida wrote: “The man adjusting his lens to take just the right frame of her suffering, might just as well be a predator, another vulture on the scene”.

The attitude that public opinion condemned was not only that of taking the picture instead of chasing the vulture immediately away but also the fact that he did not help the girl afterward –as Carter explained later- leaving her in such a weak condition to continue the march by her self towards the feeding center.

However, Carter was working in a time when photojournalists were told not to touch famine victims for fear of spreading disease. Carter estimated that there were twenty people per hour dying at the food center.

The child was not unique. Regardless, Carter often expressed regret that he had not done anything to help the girl, even though there was not much that he could have done.

In 1994, Kevin Carter won the Pulitzer prize for the disturbing photograph of a Sudanese child being stalked by a vulture. That same year, Kevin Carter committed suicide.

Carter is the tragic example of the toll photographing such suffering can take on a person. Along with his famous photograph, Carter had captured such things as a public necklacing execution in 1980s South Africa, along with the violence of the time, including shootouts and other executions.

Carter spoke of his thoughts when he took these photographs: “I had to think visually. I am zooming in on a tight shot of the dead guy and a splash of red. Going into his khaki uniform in a pool of blood in the sand. The dead man’s face is slightly gray. You are making a visual here. But inside something is screaming: ‘My God!’. But it is time to work. Deal with the rest later. If you can’t do it, get out of the game”.

The suicide: On 27 July 1994 Carter drove his way to Parkmore near the Field and Study Center, an area where he used to play as a child, and committed suicide by taping one end of a hose to his pickup truck’s exhaust pipe and running the other end to the driver’s side window. He died of carbon monoxide poisoning at the age of 33. Carter’s suicide note read:

“I’m really, really sorry. The pain of life overrides the joy to the point that joy does not exist… I am depressed… without a phone… money for rent … money for child support… money for debts… money!!!… I am haunted by the vivid memories of killings and corpses and anger and pain… of starving or wounded children, of trigger-happy madmen, often police, of killer executioners… I have gone to join Ken [recently deceased colleague Ken Oosterbroek] if I am that lucky”.