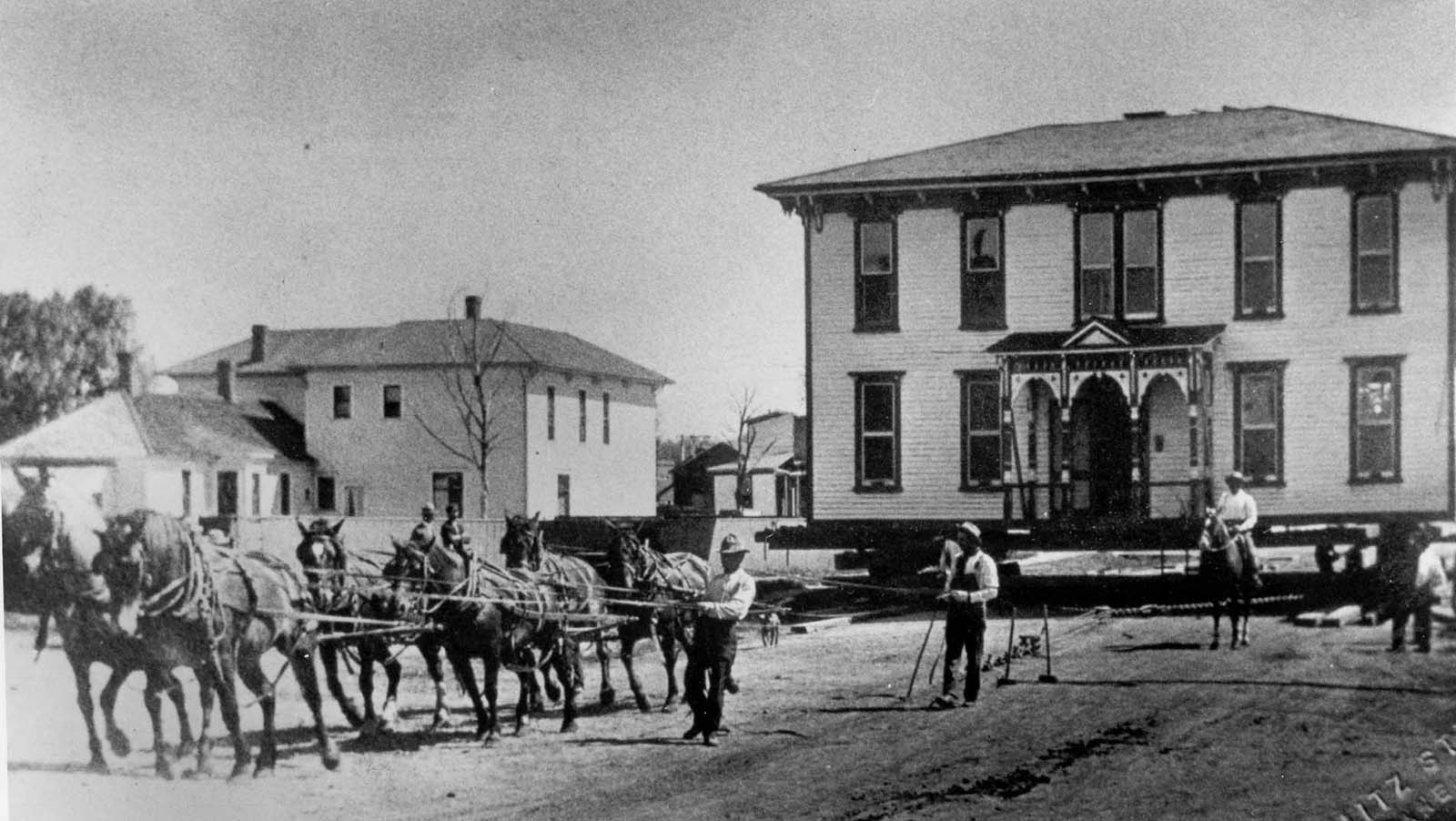 Settlers move a house with the help of horses during the late 1800s.

These vintage photographs from the 19th and early 20th centuries in the United States show teams of horses being used to move entire houses to new locations.

With the rapid railway and urban development boom, a lot of people found themselves looking to relocate their log cabins, houses, Victorian mansions, and other abodes, and it looks like all they needed were some powerful horses.

Although many people find it hard to believe, a two-horse team was normally used to accomplish house moves. These incredible photos show how even fairly large structures could be moved from one place to another using plain old horsepower.

First of all, the house was jacked up off its foundation and was placed on heavy wooden beams. The ends of these beams were pointed and tended to act as runners similar to those on a sleigh. 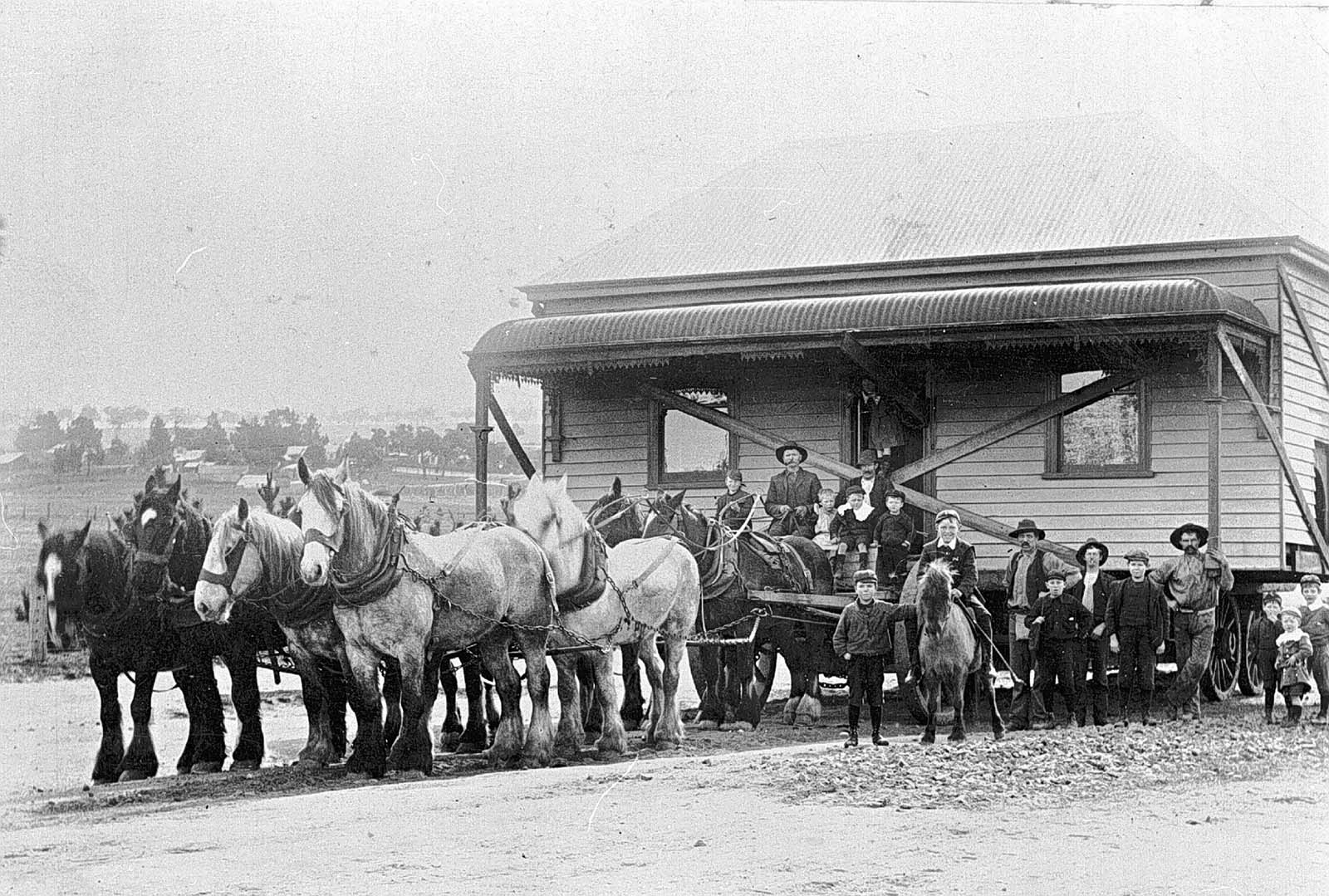 An entire family gets involved with a house move, with children watching on as the horses cart their heavy load.

A temporary wooden track was put down in the street and the greased runners slid along it. The track consisted of flat planks, supported by cross ties, similar to those used on railroad tracks.

As the house inched along the street, the planks and ties left behind it were picked up and manually carried to the front of the house and laid down ahead of it. Numerous cross ties and planks, ready for reuse, are visible in the photos.

Obviously, you couldn’t hitch a team directly to the front of a house, crack the whip, yell giddeeyapp and expect anything to happen. Horses just weren’t that strong. Instead, it was necessary to mount a capstan in the middle of the street.

This capstan was anchored to some very strong objects well ahead of the house. It would appear that the capstan shown in some of the pictures was anchored to trees by means of heavy chains. 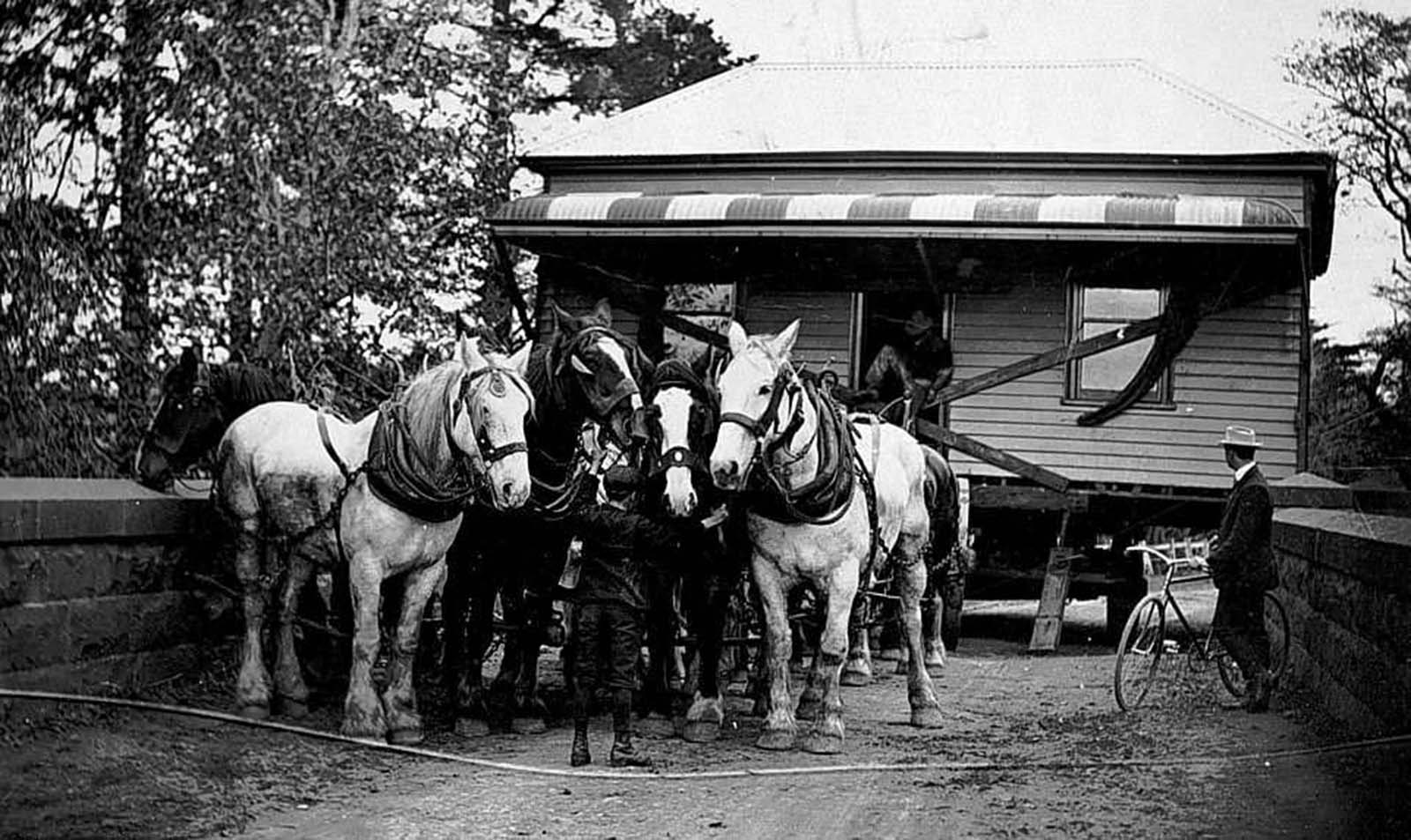 A team of horses started trotting over a bridge but the house was too wide. 1915.

A pulley was fastened securely to the front of the house, probably to a cross beam between the wooden runners. One end of a very strong rope, or steel cable ran from this pulley to a tree trunk or other highly immovable object. It then went through the pulley and was wrapped around the capstan.

The capstan was then turned by the horses which walked in a circle and tugged on a pole connected to the capstan. As they walked, the cable would slowly wind up on the capstan and pull the house forward. And yes, the horses had to step over the cable each time they encountered it.

If the structure was small, then it was just pulled by the horses without the need of using a capstan. One photograph shows six horses straining as they pull a two-storey abode forwards, with a group of men steering them as they go.

Another image shows an entire family getting involved with the house move, with children watching on as the horses cart their heavy load. Even when gas-powered trucks were available, horses were still used because they were able to step over the large cables as they circled, something that would halt a truck at the time.

The moving of houses and even churches and schools was briefly a big industry in the United States. There were a lot of companies offering their services to move your home to a new address.

As the country’s infrastructure became more established and building materials became cheaper, traffic, telephones lines and other services put an end to the era of moving buildings. 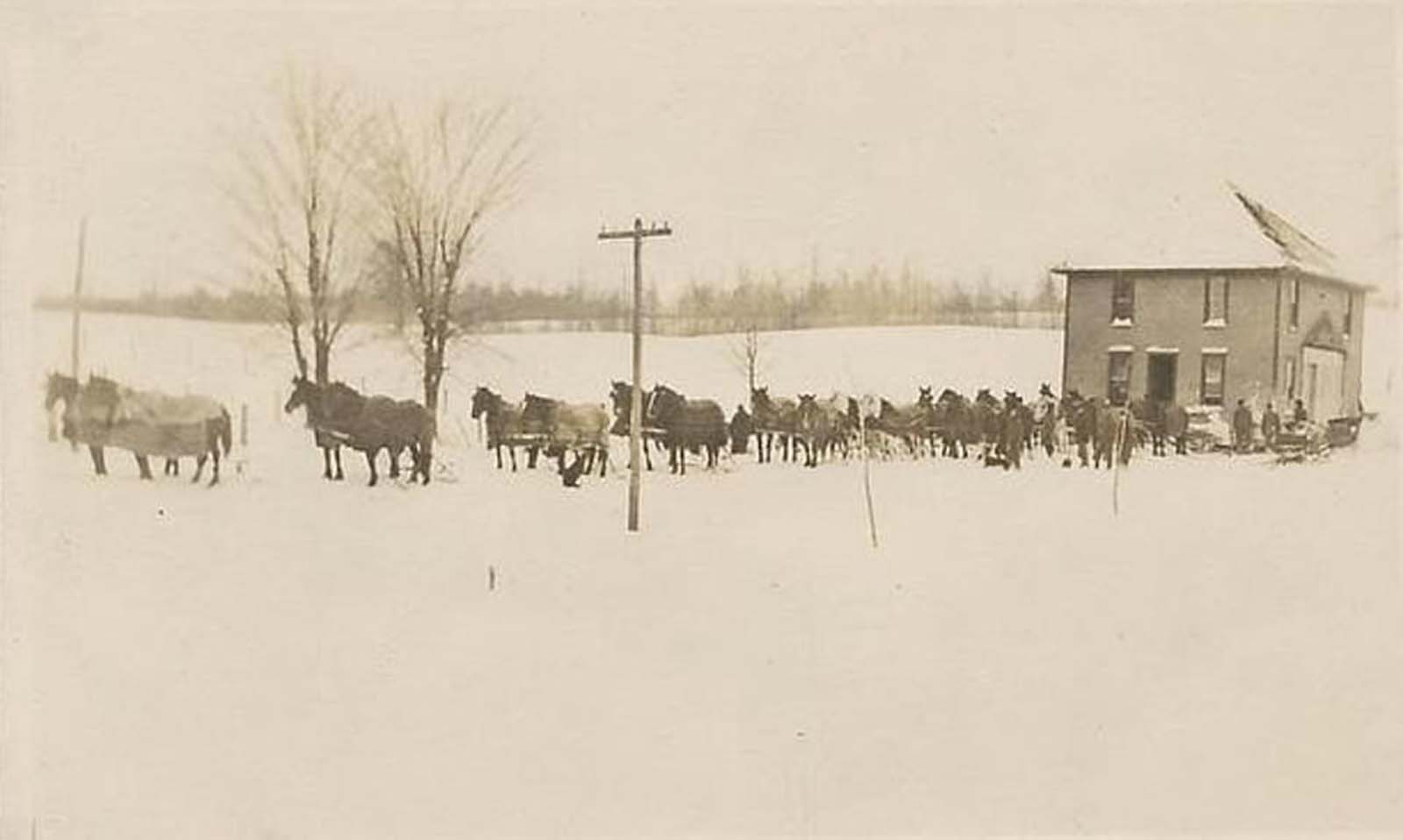 Moving a house during the winter. Twenty four horses all harnessed together to provide the ‘horsepower’ to get the job done. 1915. 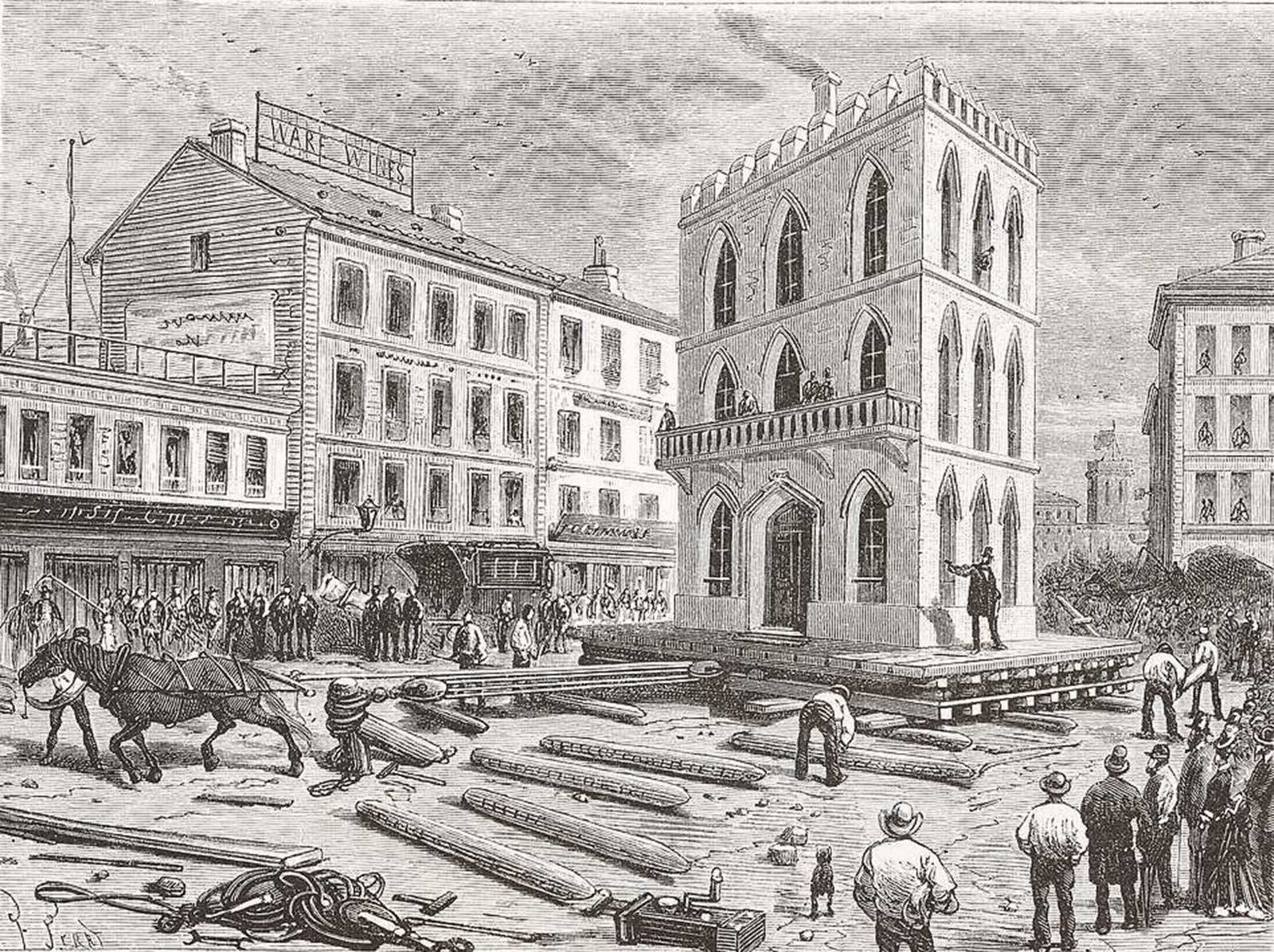 An engraving dating from 1877 shows a horse being used to move a three-storey house in New York. 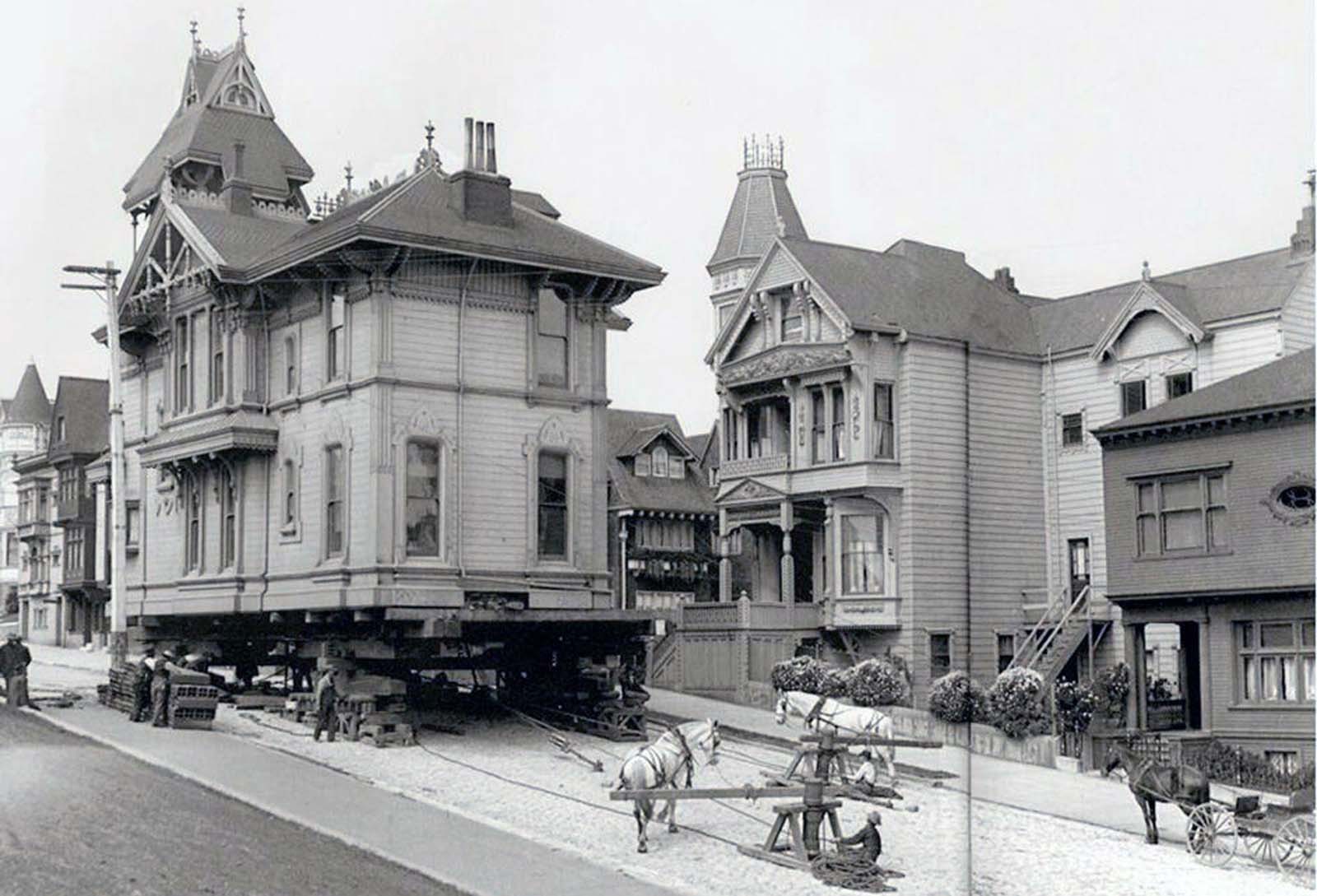 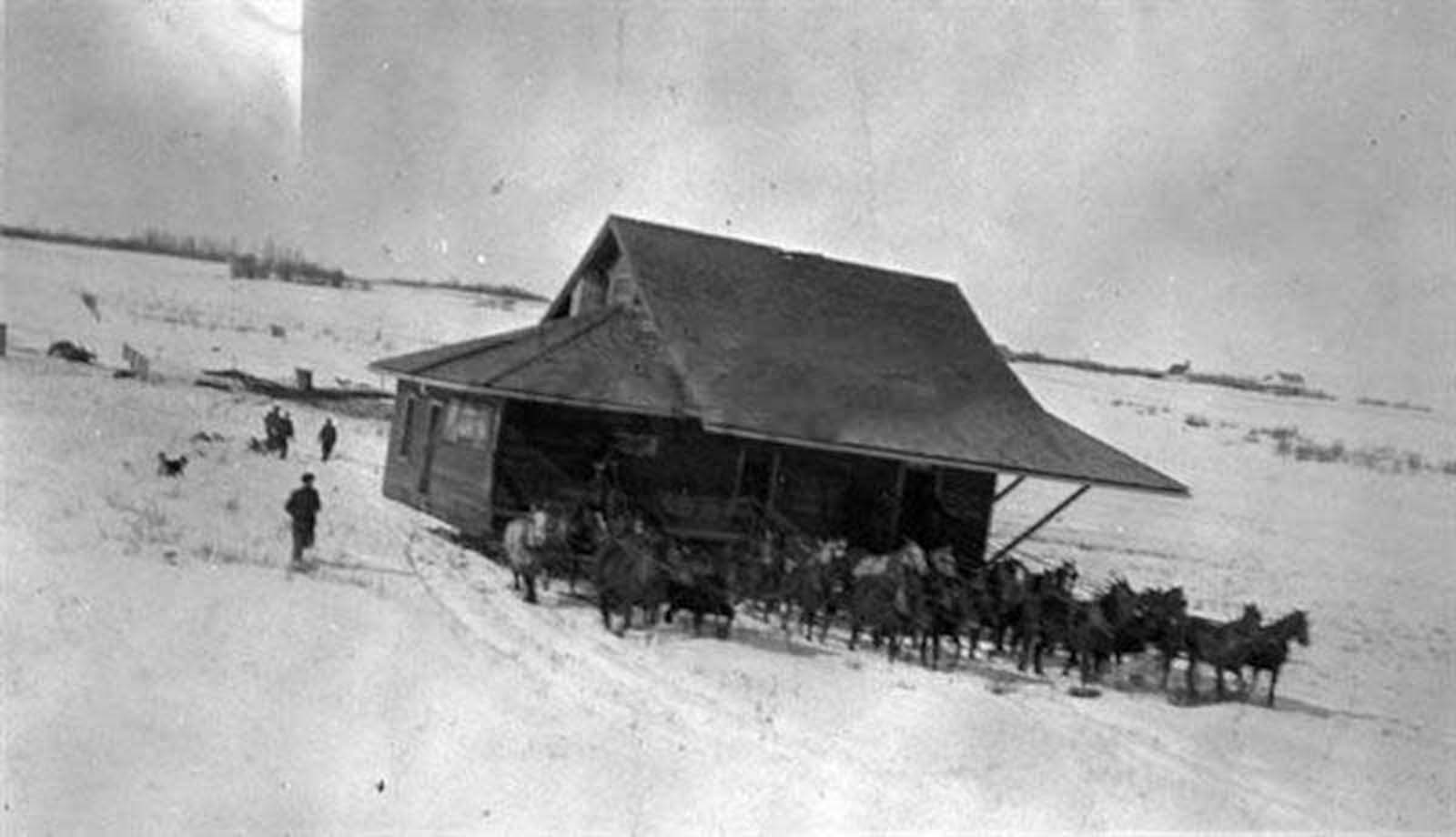 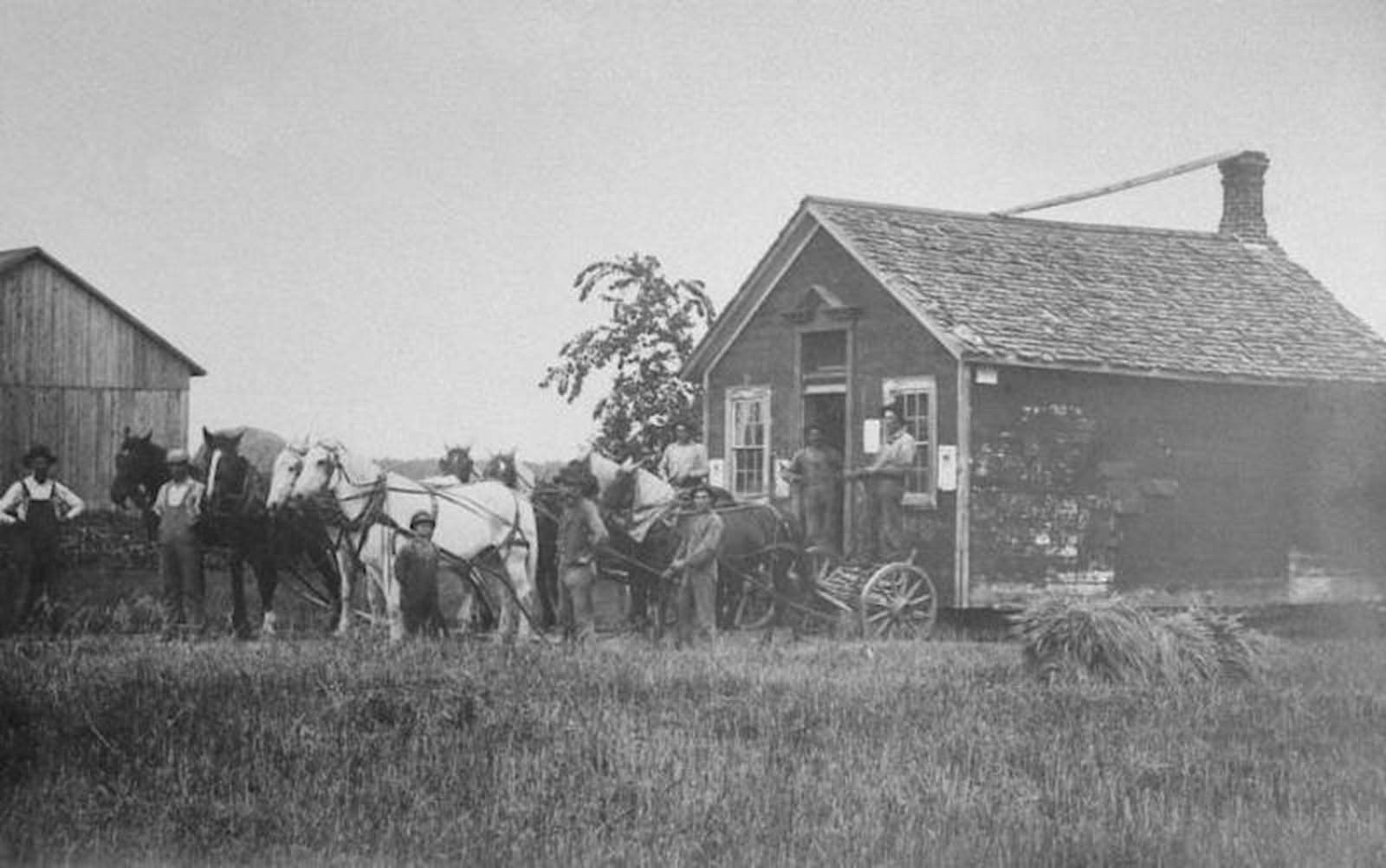 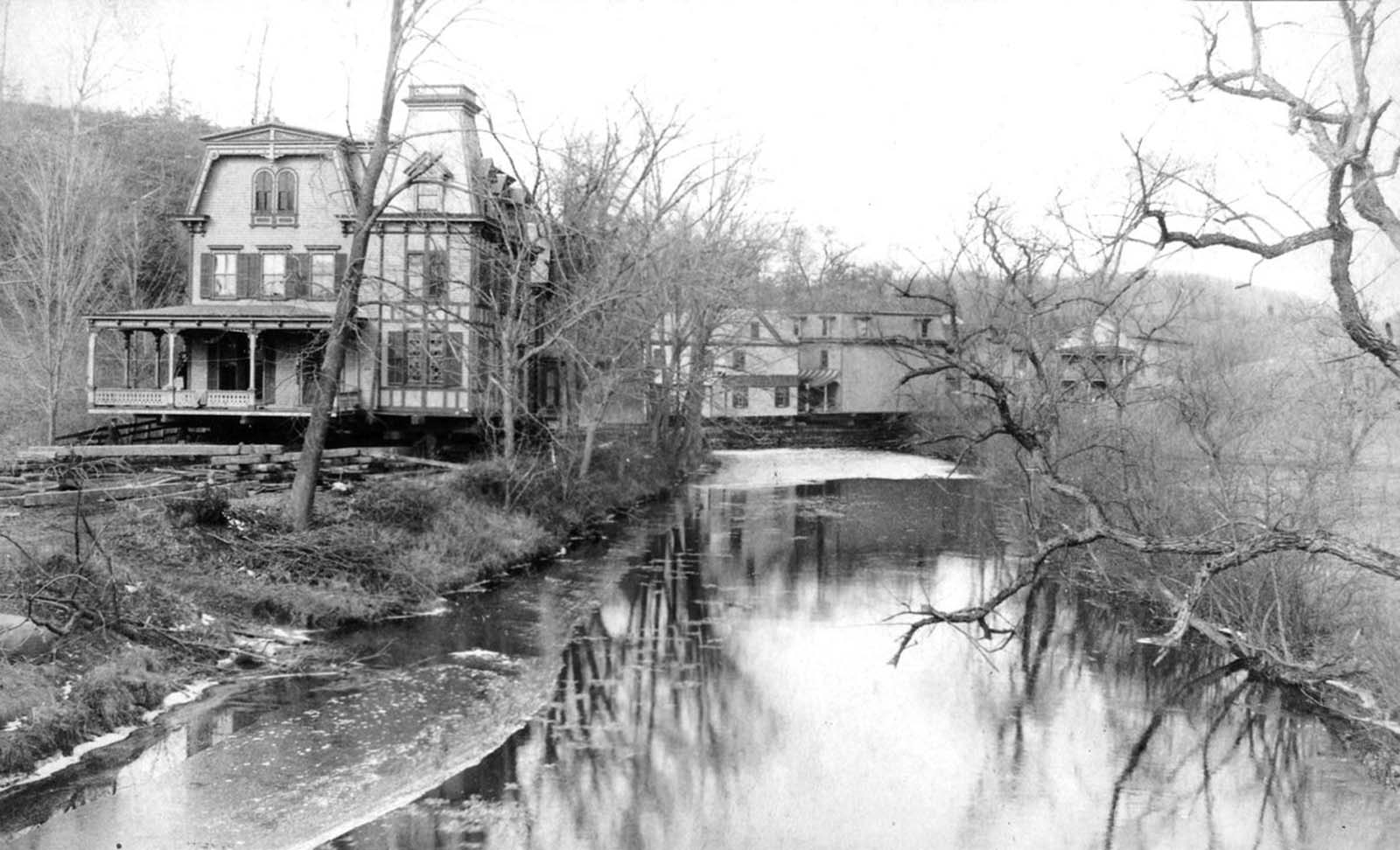 A house marching along the river. 1900s. 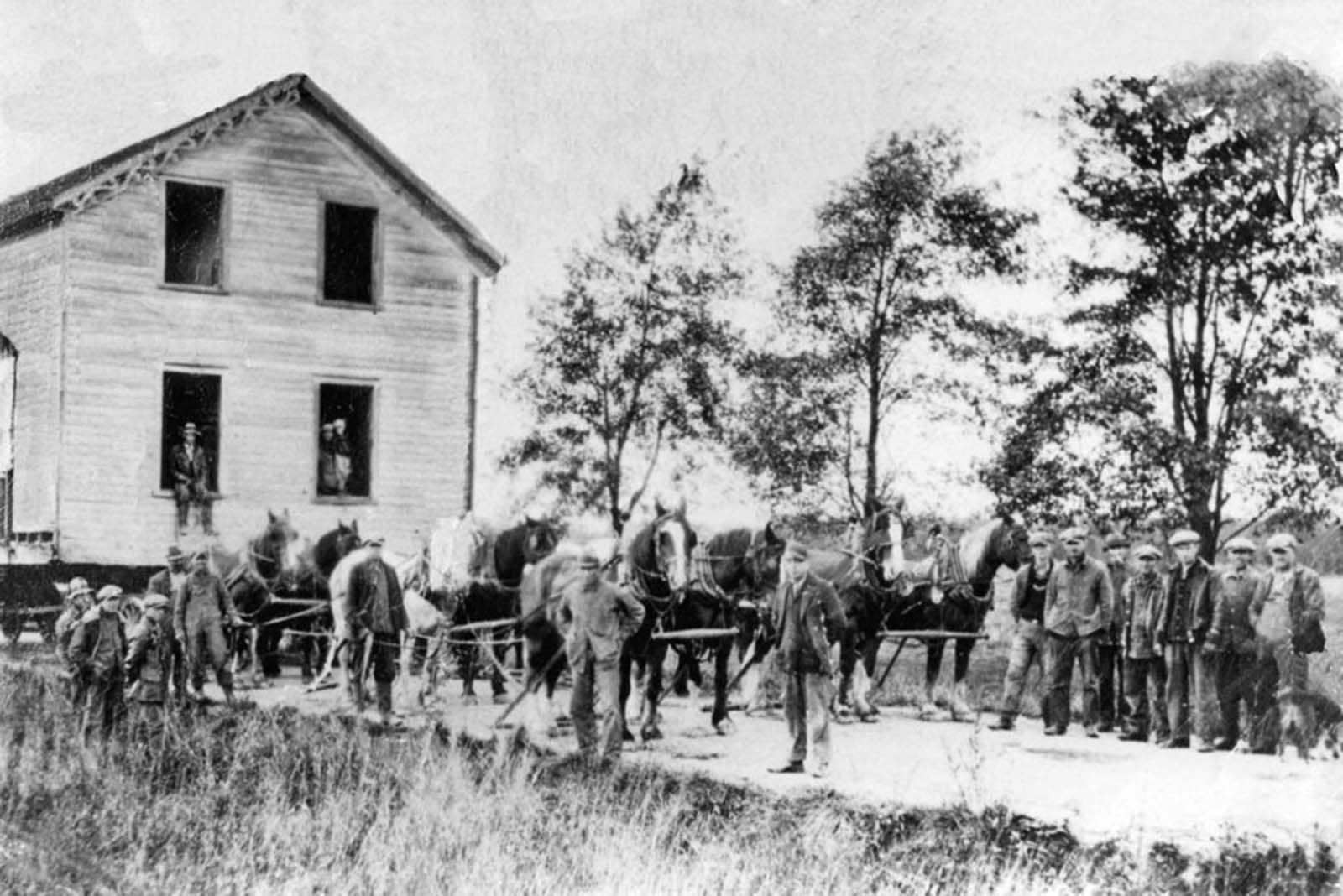 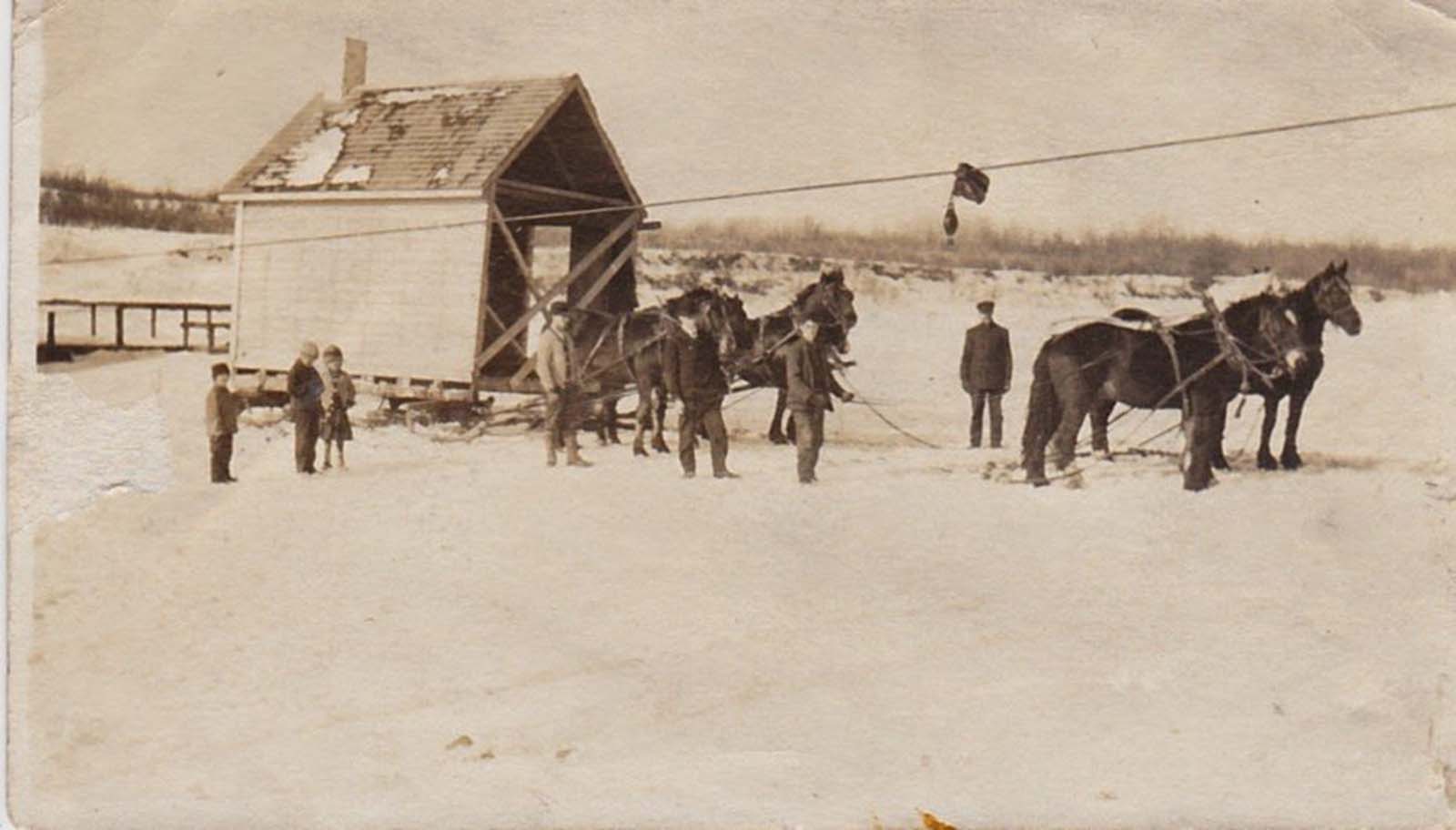 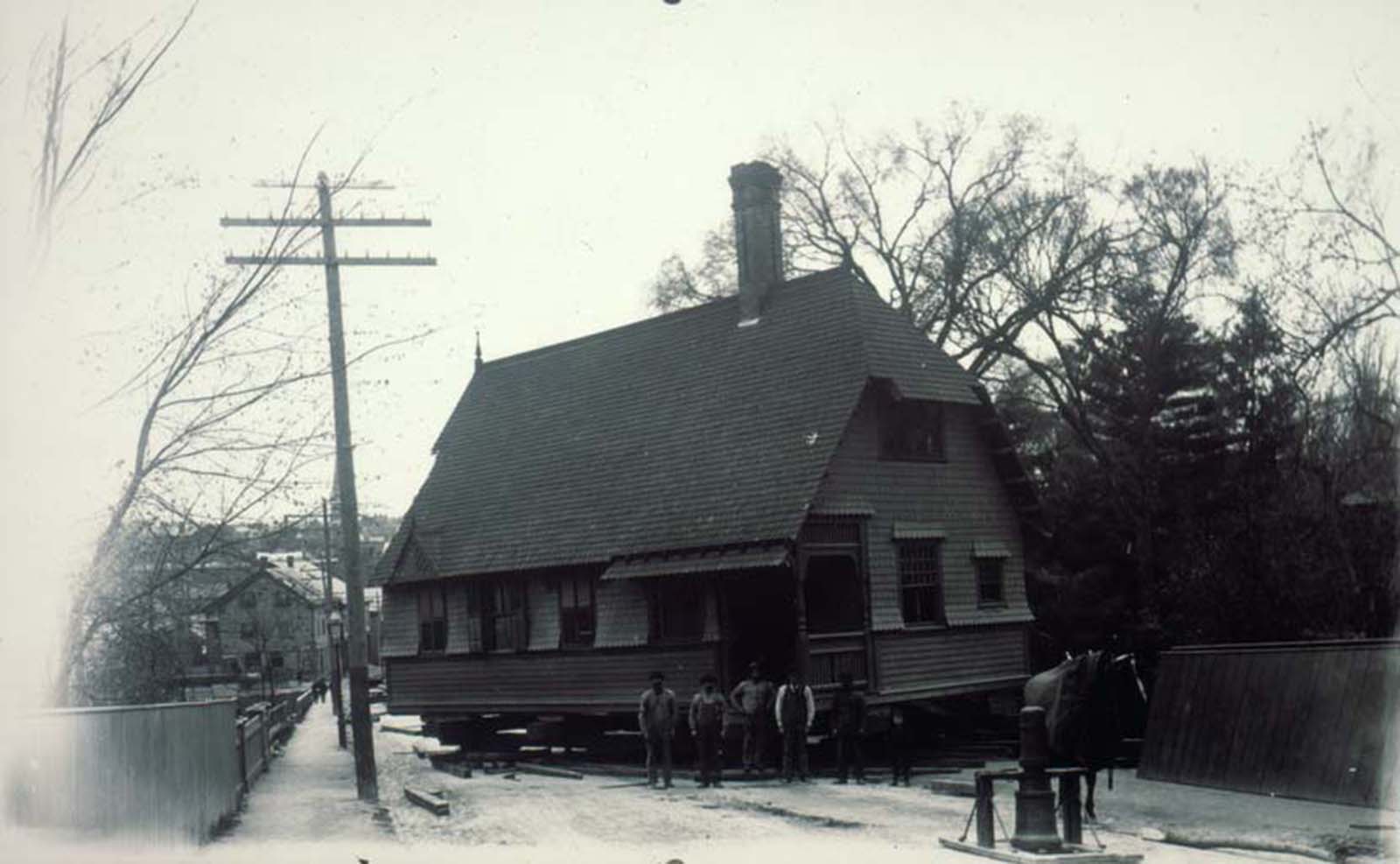 A group of men move a house down a street with a horse and capstan. 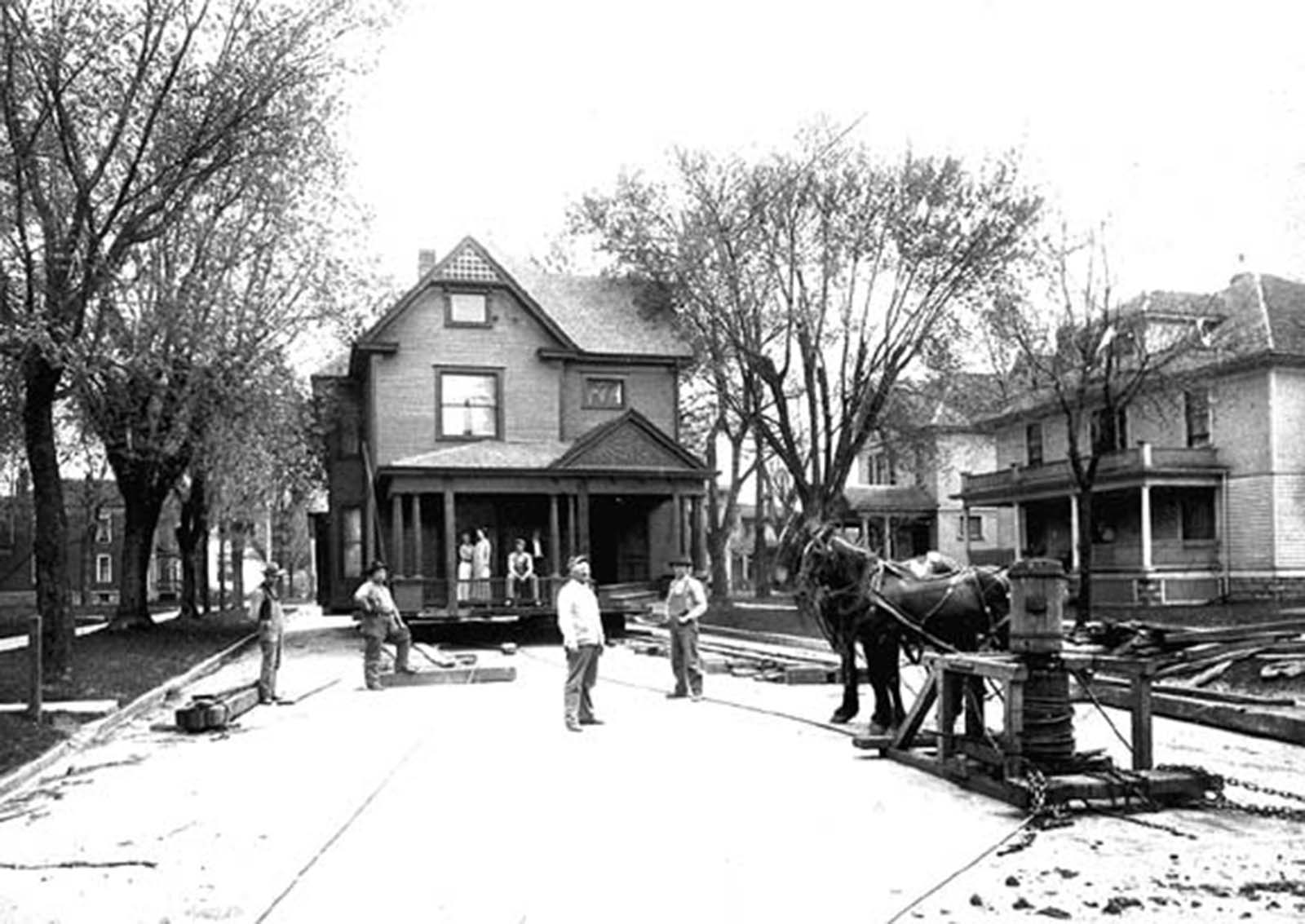