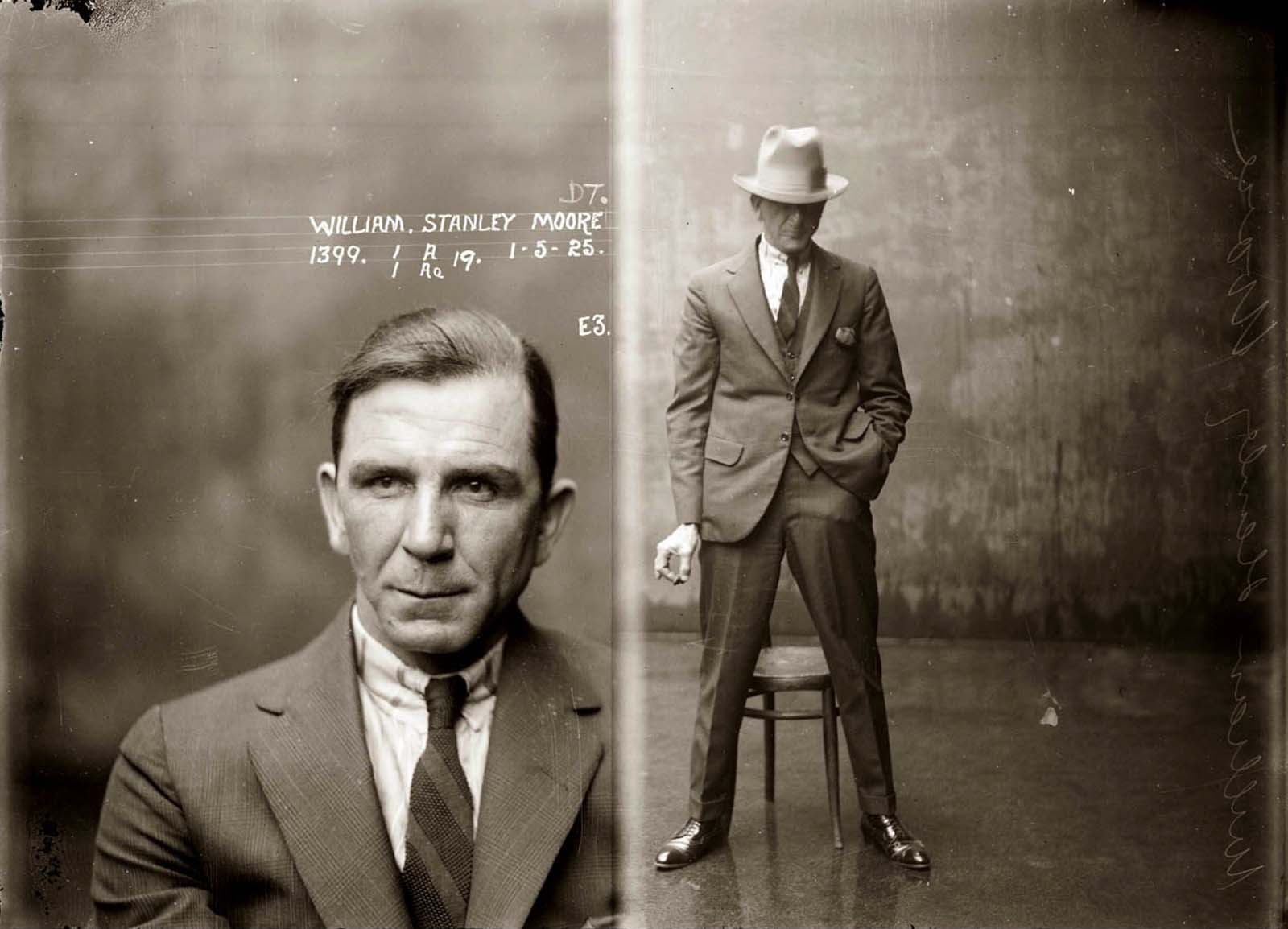 Dressed in their finest suits and ties with their top hats cocked towards the camera, these men and women seem to be posing for expensive portraits. But behind their tidy appearances are guilty eyes that hide some of the most sinister crimes policemen of the day had dealt with.

These are mugshots of Australian convicts who were dealt with by police for chilling murders, robberies burglaries and other crimes in the 1920s and 1930s.

Australia’s Justice & Police Museum has released 2,500 photographs of female criminals from the 1920s. The pictures of murderers, bigamists, bootleggers and prostitutes provide a fascinating glimpse into life in Australia in the early 20th Century.

These “special photographs” were mostly taken in the cells at the Central Police Station, Sydney and are, as curator Peter Doyle explains, of “men and women recently plucked from the street, often still animated by the dramas surrounding their apprehension”.

Doyle suggests that, compared with the subjects of prison mug shots, “the subjects of the Special Photographs seem to have been allowed – perhaps invited – to position and compose themselves for the camera as they liked.

Their photographic identity thus seems constructed out of a potent alchemy of inborn disposition, personal history, learned habits and idiosyncrasies, chosen personal style (haircut, clothing, accessories) and physical characteristics”. The images themselves are of excellent quality, beautifully composed and in many cases, quite artistic. 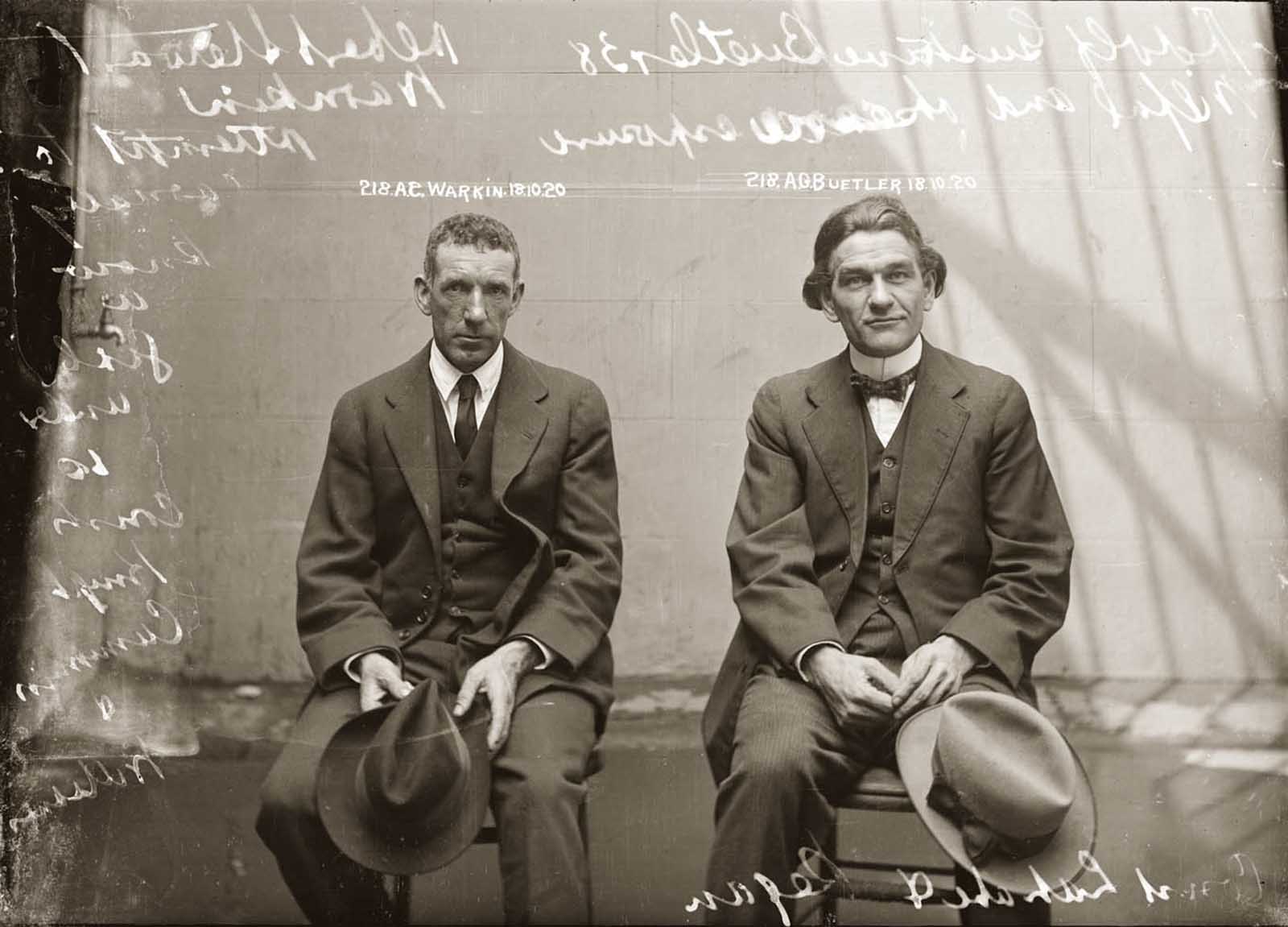 Albert Stewart Warnkin is listed in the NSW Police Gazette of 10 November 1920, as charged with attempting to carnally know a girl eight years old. No entry is found for Beutler, whose picture is inscribed ‘wilful and obscene exposure’. 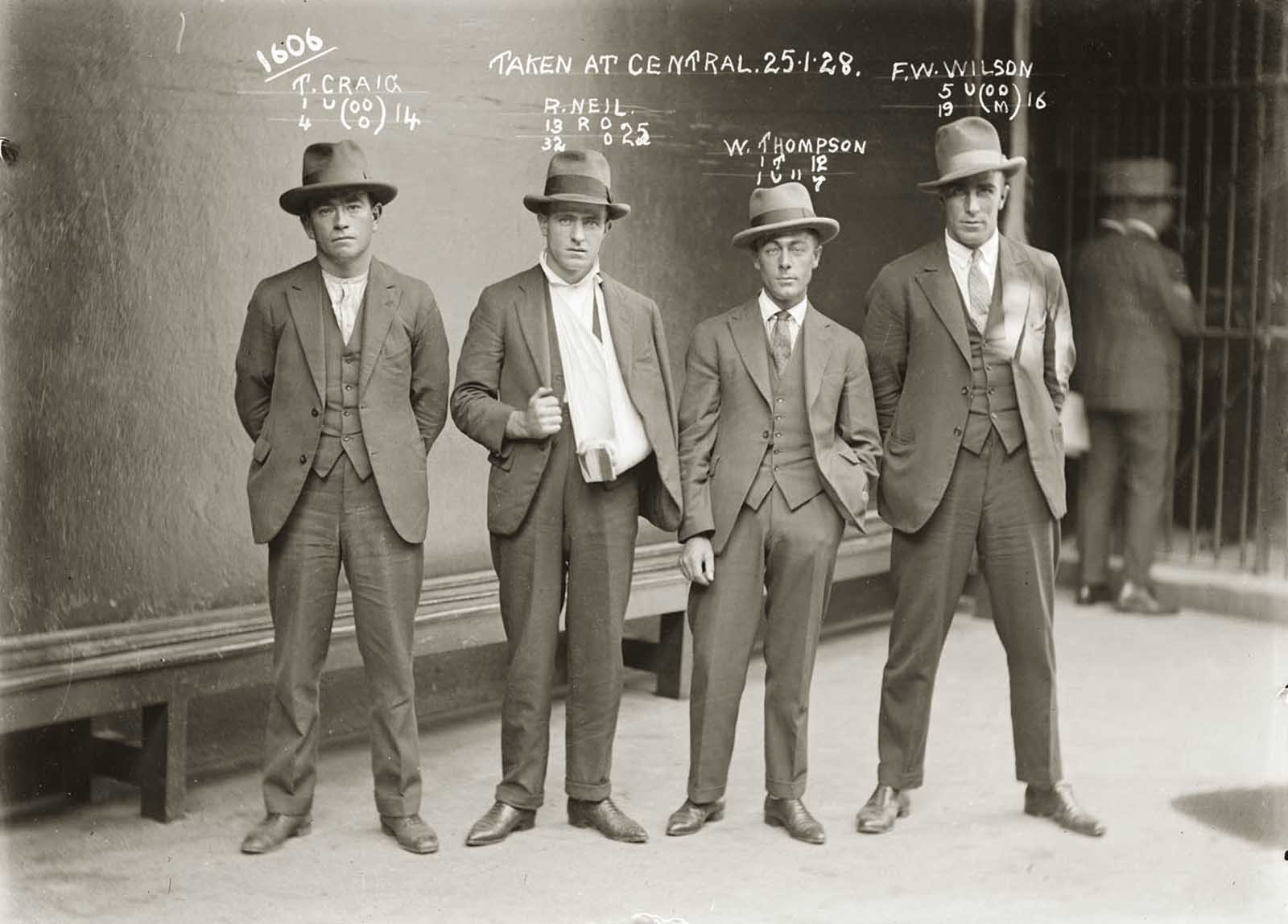 This photograph was apparently taken in the aftermath of a raid led by Chief Bill Mackay – later to be Commissioner of Police – on a house at 74 Riley Street, ‘lower Darlinghurst’. Numerous charges were heard against the 15 men and women arrested. It was a house frequented by ‘reputed thieves’. 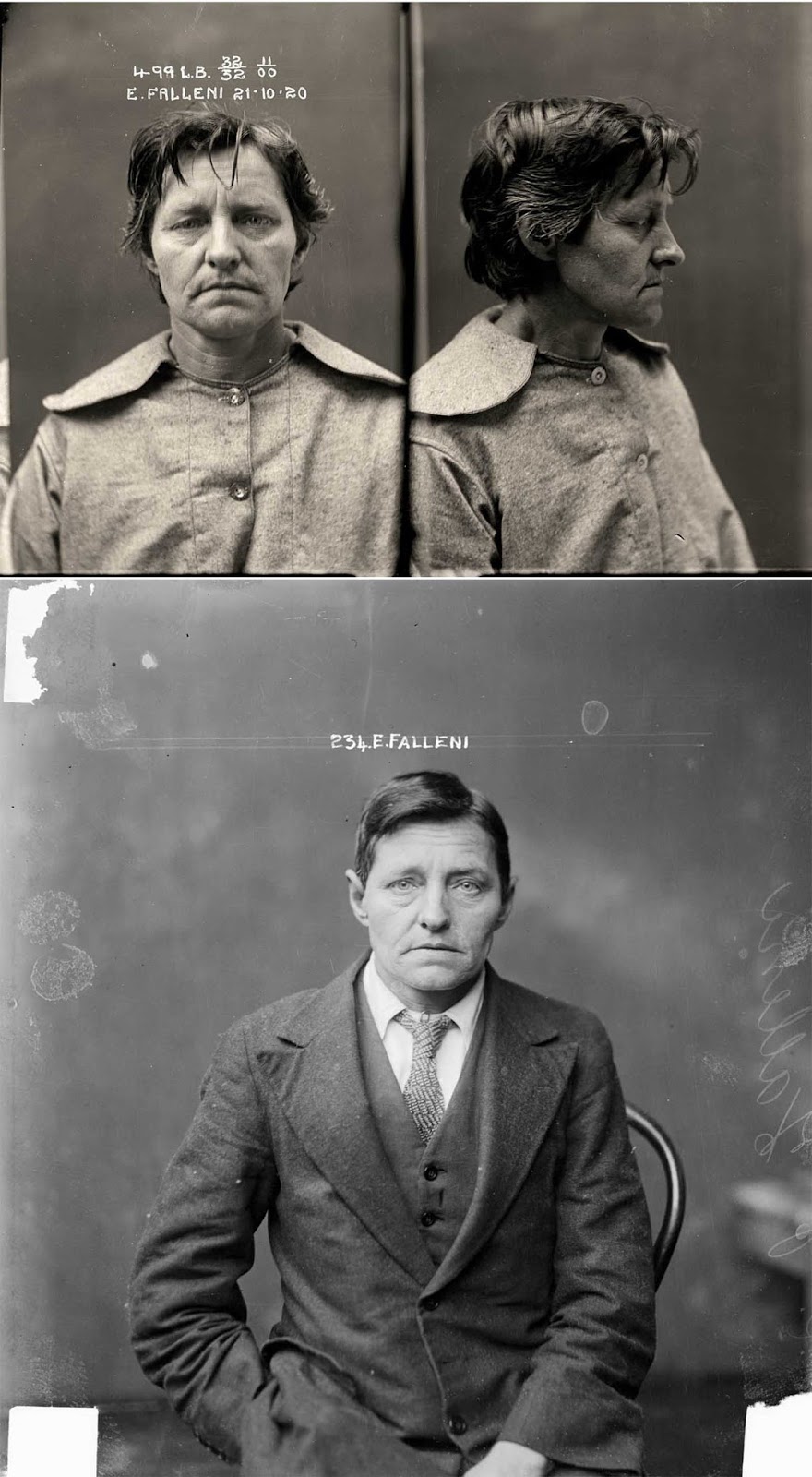 Crime: murder. Eugenia Falleni spent most of her life masquerading as a man. In 1913 Falleni married a widow, Annie Birkett, whom she later murdered. The case whipped the public into a frenzy as they clamoured for details of the ‘man-woman’ murderer. Aged approximately 35. 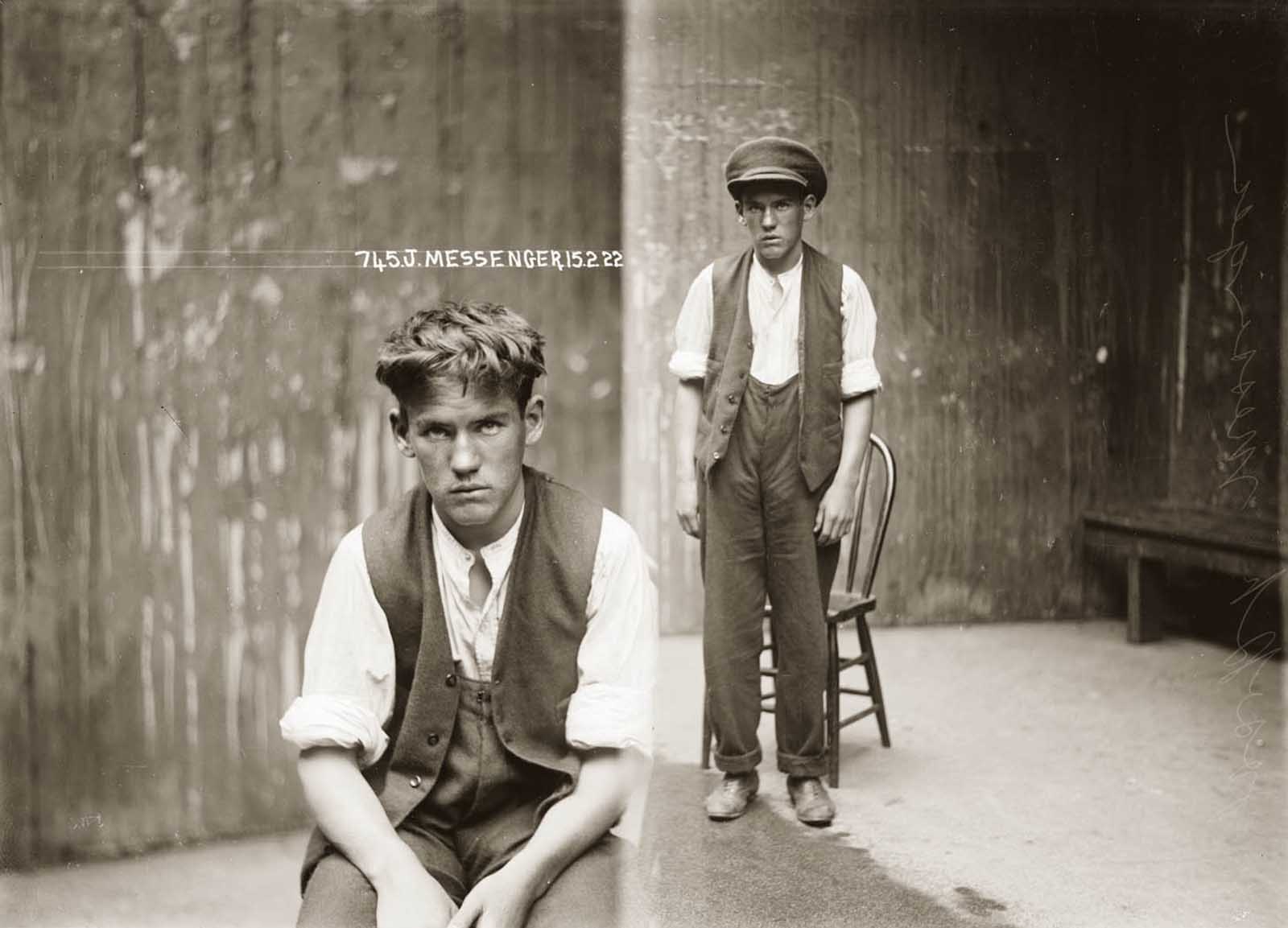 Joseph Messenger and Valerie Lowe were arrested in 1921 for breaking into an army warehouse and stealing boots and overcoats to the value of 29 pounds 3 shillings.

The following year, when this photograph was taken, they were charged with breaking and entering a dwelling. Those charges were eventually dropped but they were arrested again later that year for stealing a saddle and bridle from Rosebery Racecourse.

As an adult Messenger was active in inner-Sydney underworld through the 1920s, and he appears in the NSW Criminal Register (16 July 1930 entry no 171) as a seasoned criminal and gang affiliate. The description of his modus operandi includes, ‘Violently [resists] arrest…frequents wine saloons, billiard rooms, and racecourses … consorts with prostitutes’. This photograph shows Messenger at age 18. 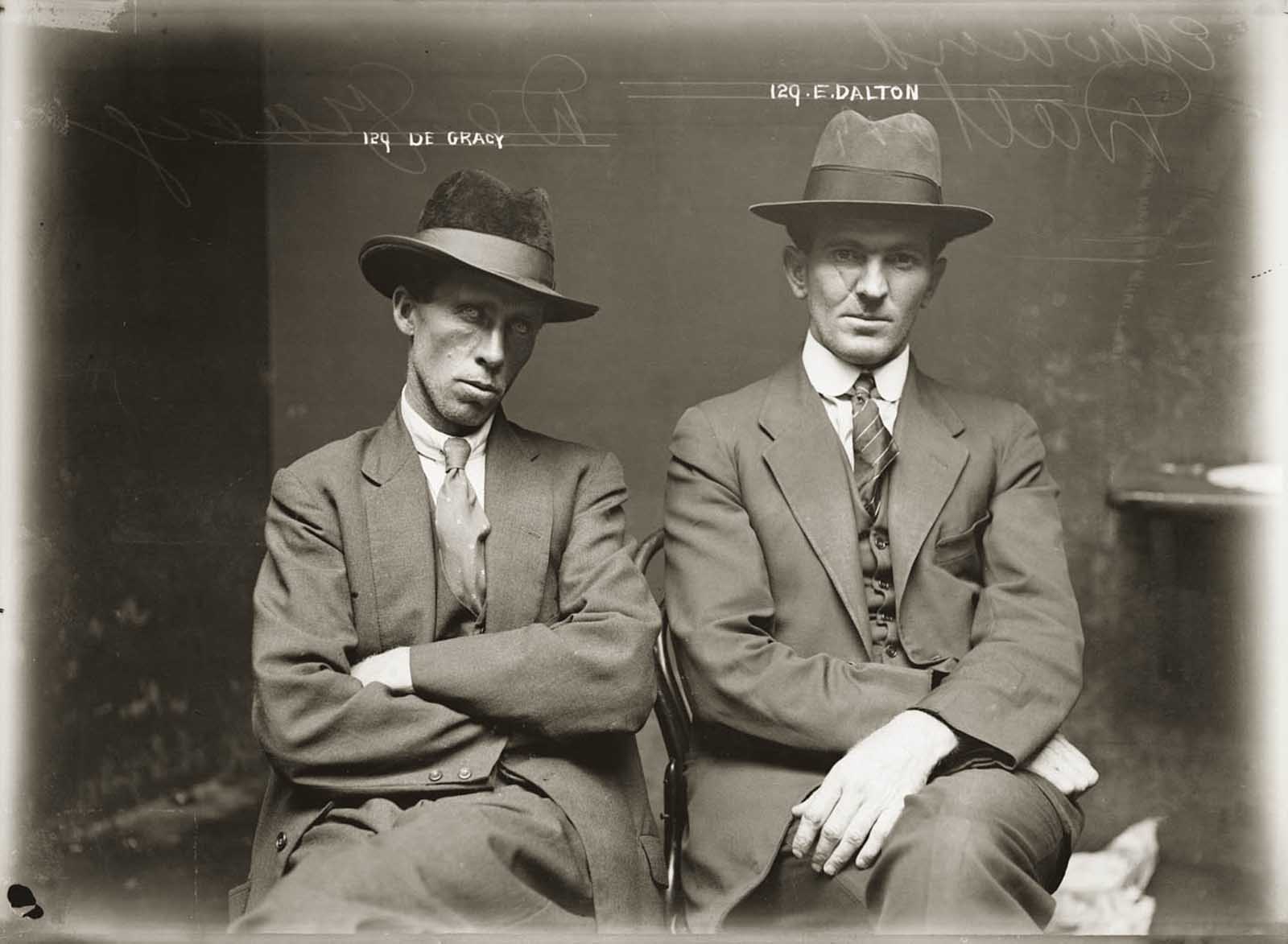 A cropped print of this photograph appears in a police photo book from the 1920s, annotated in pencil “magsmen”, with no further information offered. 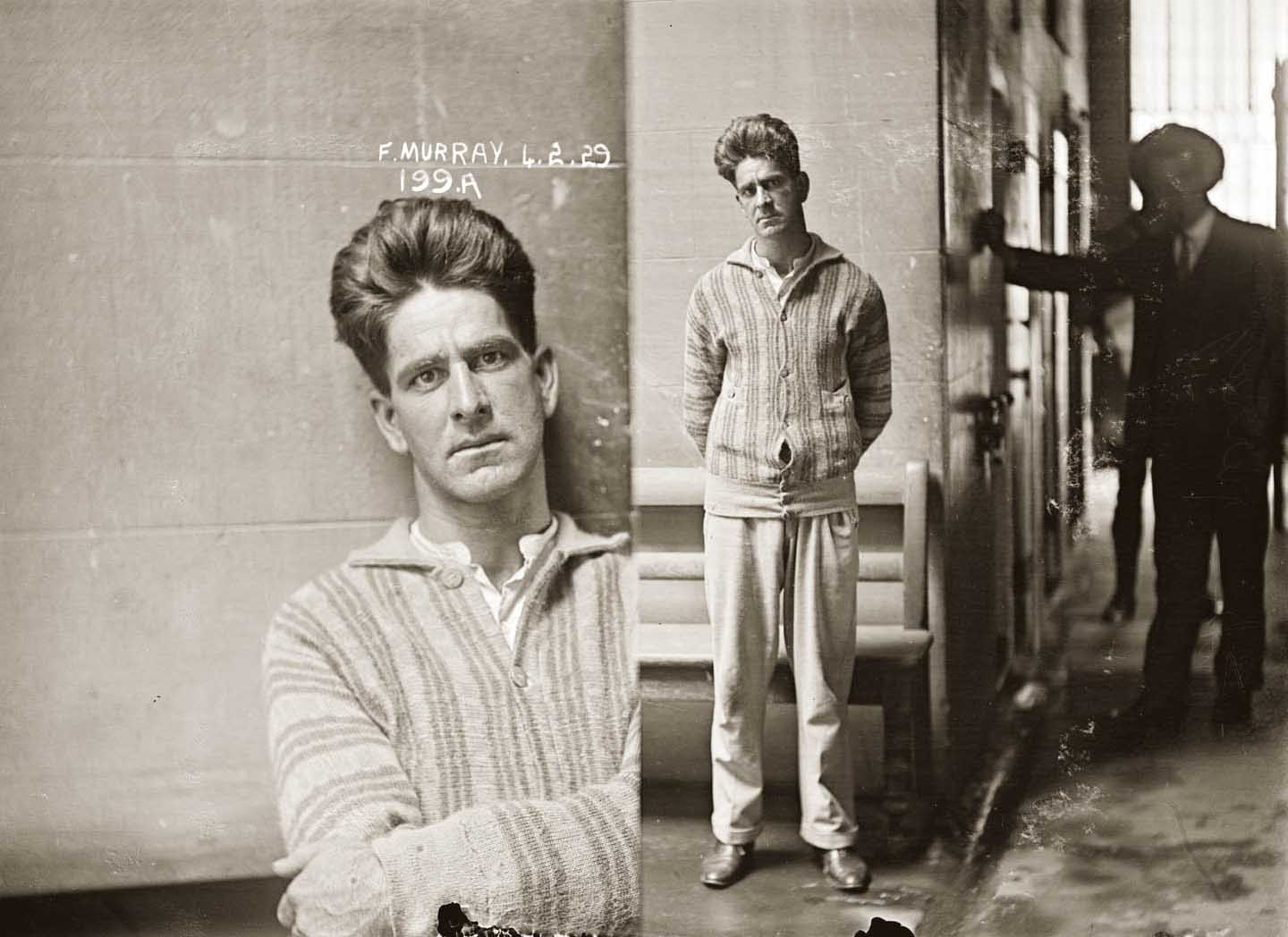 Harry Williams was sentenced to 12 months of hard labour in March 1929 for breaking, entering and stealing. Murray/Williams’ entry in the NSW Criminal Register, April 30 1930 describes him as a housebreaker and thief, whose MO includes ‘[breaking] leadlighted door or windows or [forcing] the fanlights of dwelling houses during the absence of tenants’.

He ‘disposes of stolen property to patrons of hotel bars or to persons in the street … professing] to be a second-hand dealer’. Although he ‘consorts with prostitutes’ and ‘frequents hotels and wine bars in the vicinity of the Haymarket’, he is described as being of ‘quiet disposition’. 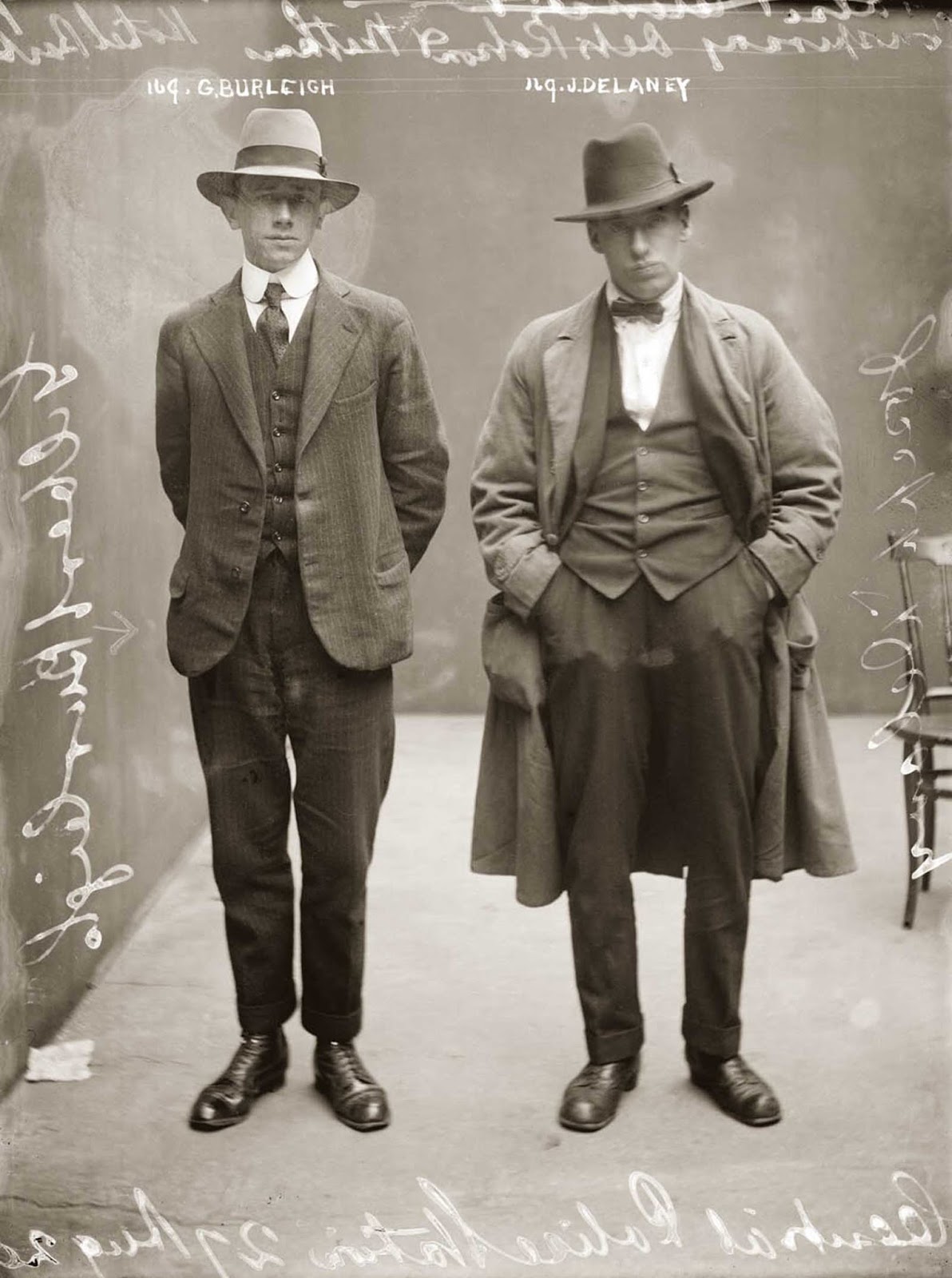 Gilbert Burleigh on the left is identified as a ‘hotel barber’, and Delaney‘s picture is labelled ‘false pretences & conspiracy’. A companion photograph makes it clear that in fact, Delaney was the hotel barber – meaning one who books into a hotel, boarding house or residential and robs (or ‘snips’) fellow patrons, usually in the dead of night.

In this instance, Delaney was charged with stealing a cigarette case, a hairbrush, a clock and a quantity of clothing from a dwelling-house. A month later he was further charged ‘being about to abscond from bail’. He is described as ‘a fireman and a returned soldier’. 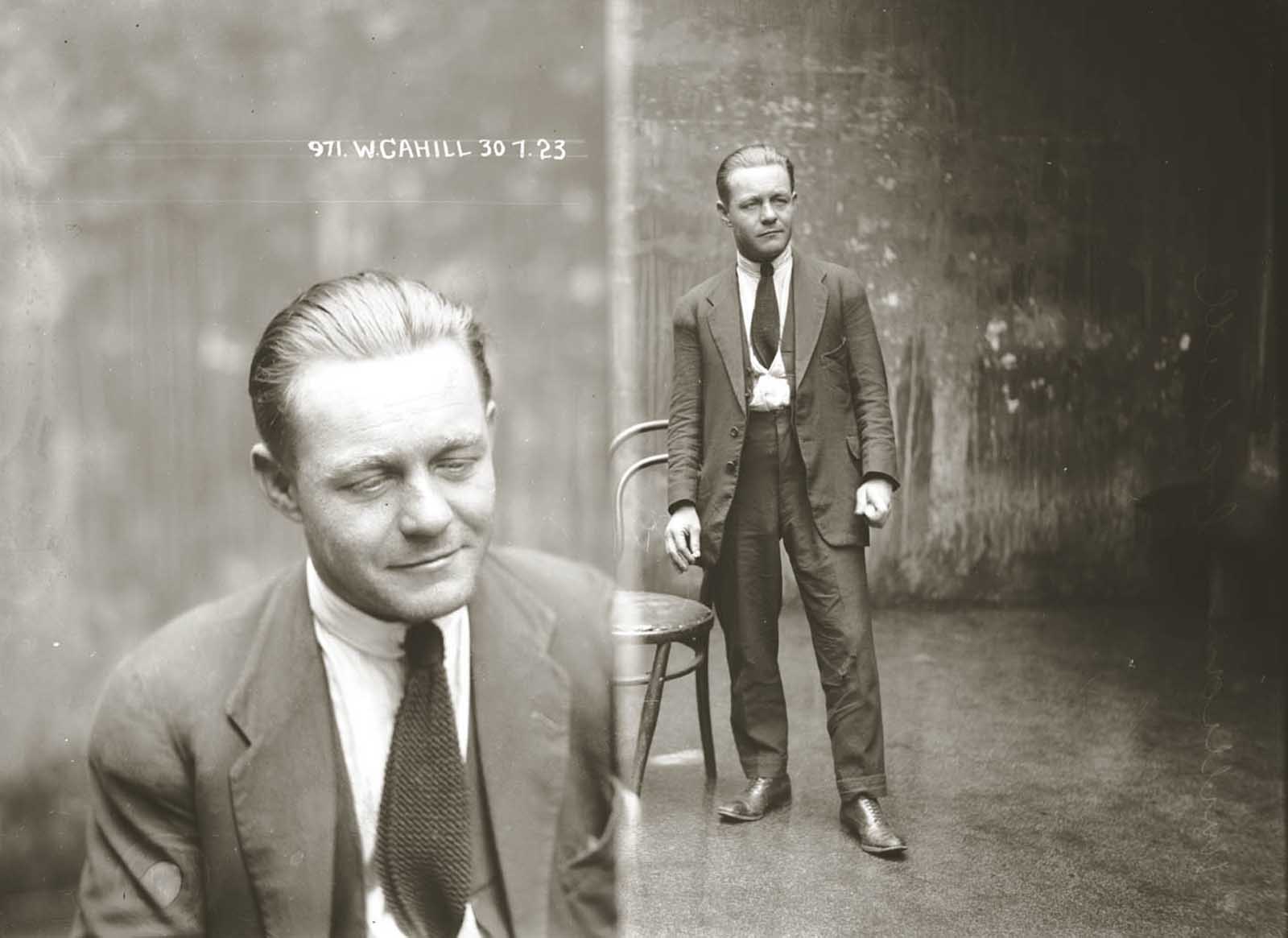 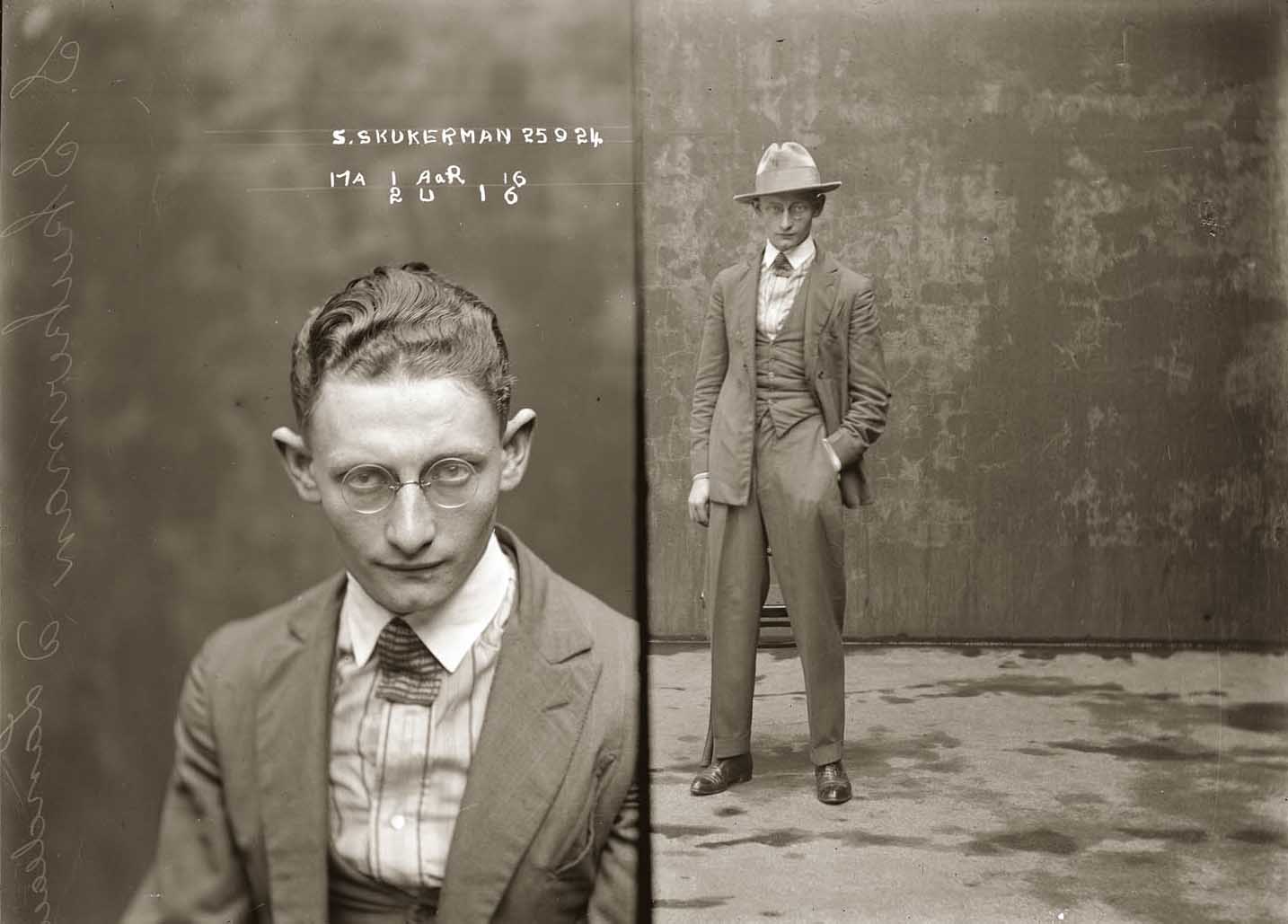 An entry in the Supplement to the NSW Police Gazette Sydney for Skukerman, (alias Kukarman, alias Cecil Landan) is captioned ‘obtains goods from warehousemen by falsely representing that he is in business’. 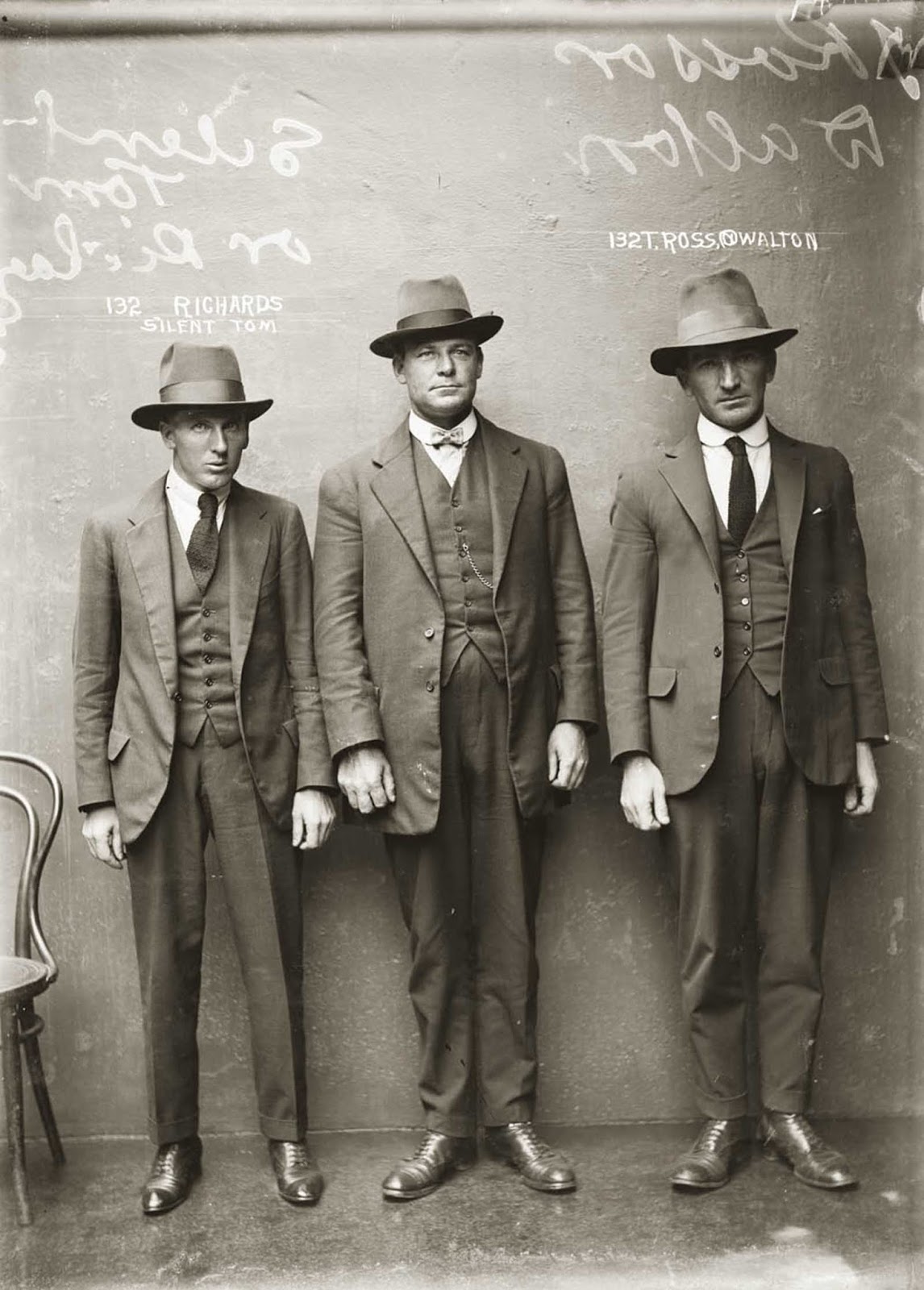 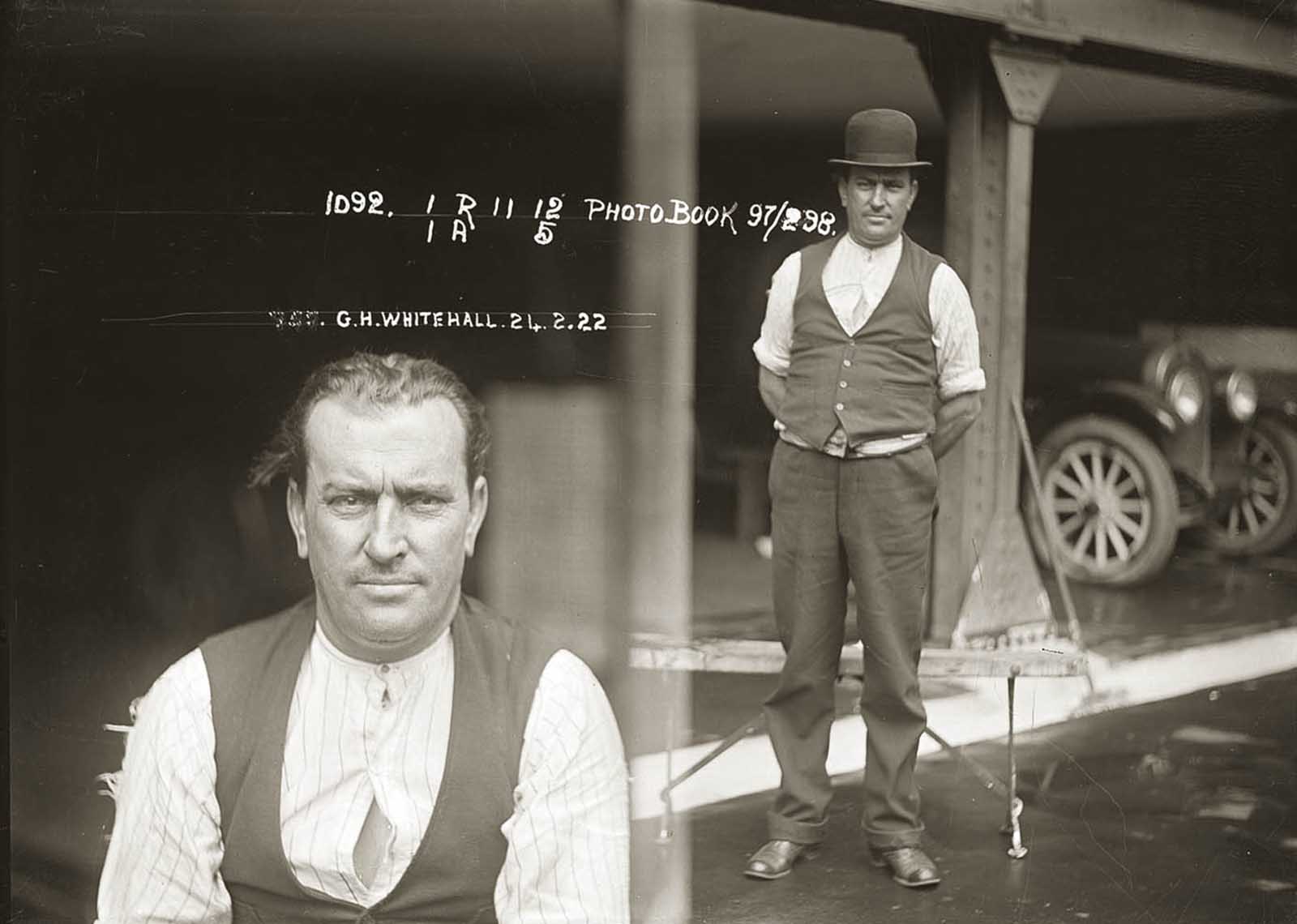 George Whitehall, carpenter, handed himself into Newtown police after hacking to death his common-law wife, Ida Parker on Thursday afternoon 21 February 1922, at their home in Pleasant Avenue, Erskineville. This photo was apparently taken the following morning at Newtown Police Station. 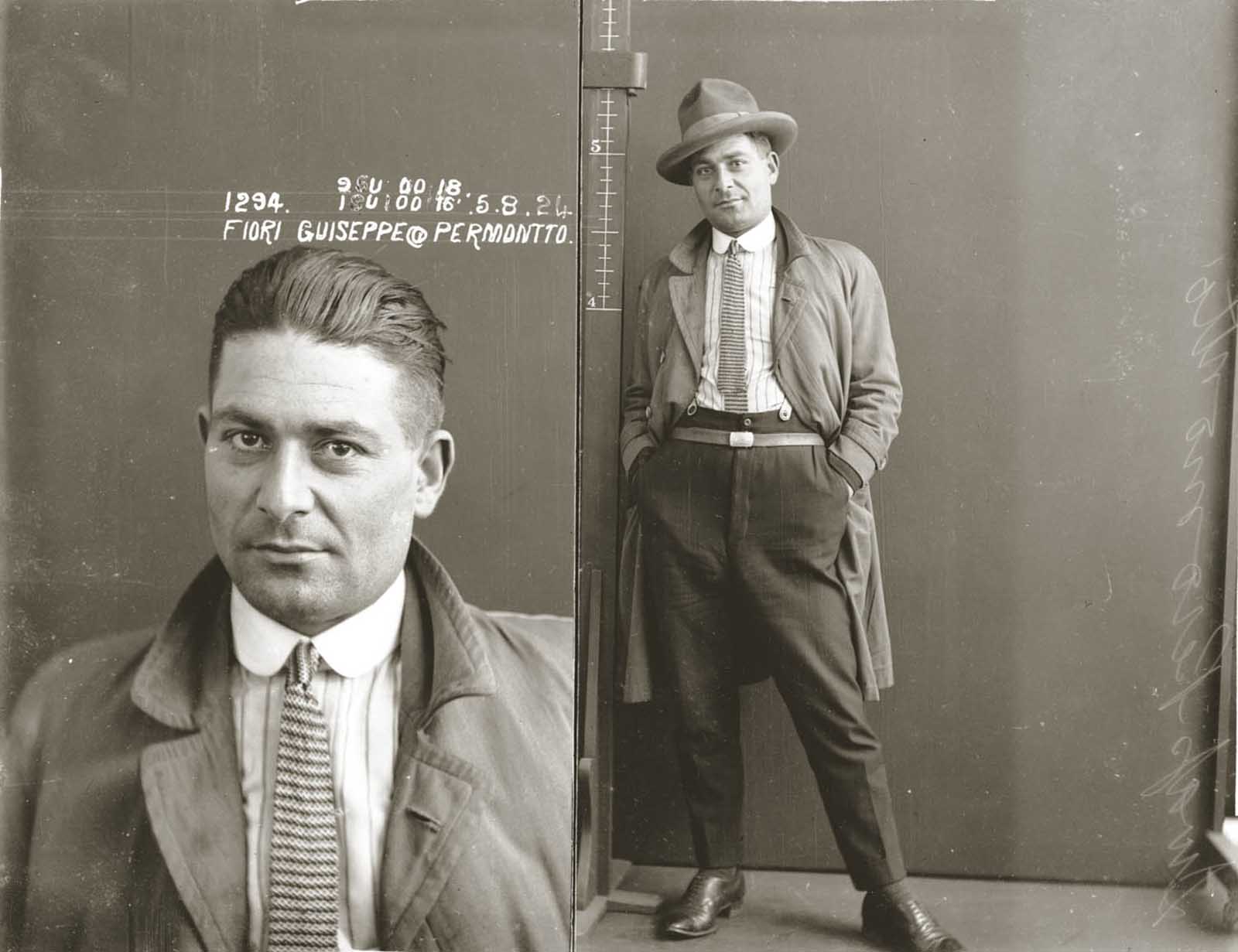 No entry for Fiori/Permontto is found in the NSW Police Gazette for 1924, although this photo appears in a later photo supplement, in which Fiori is described as a safebreaker. 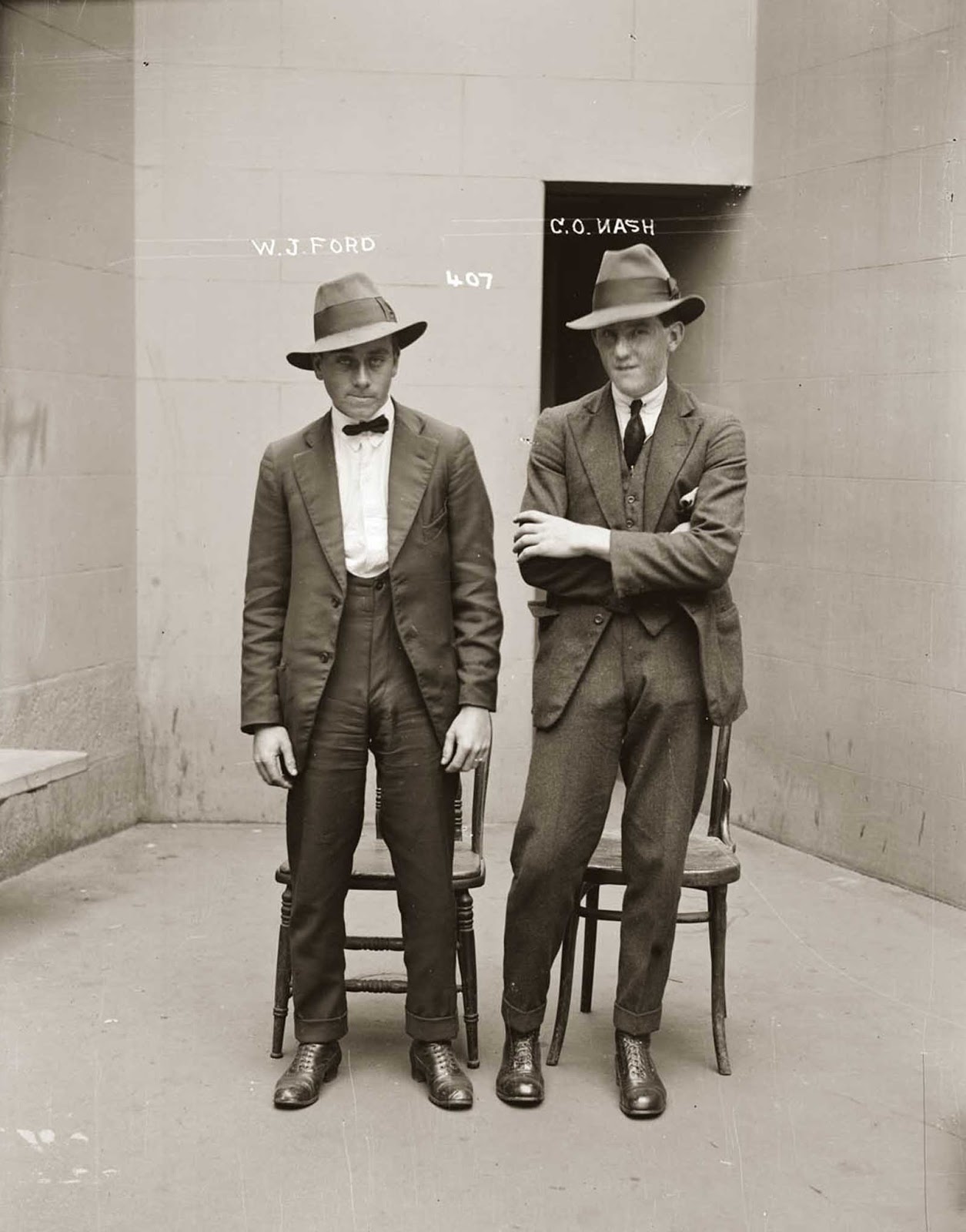 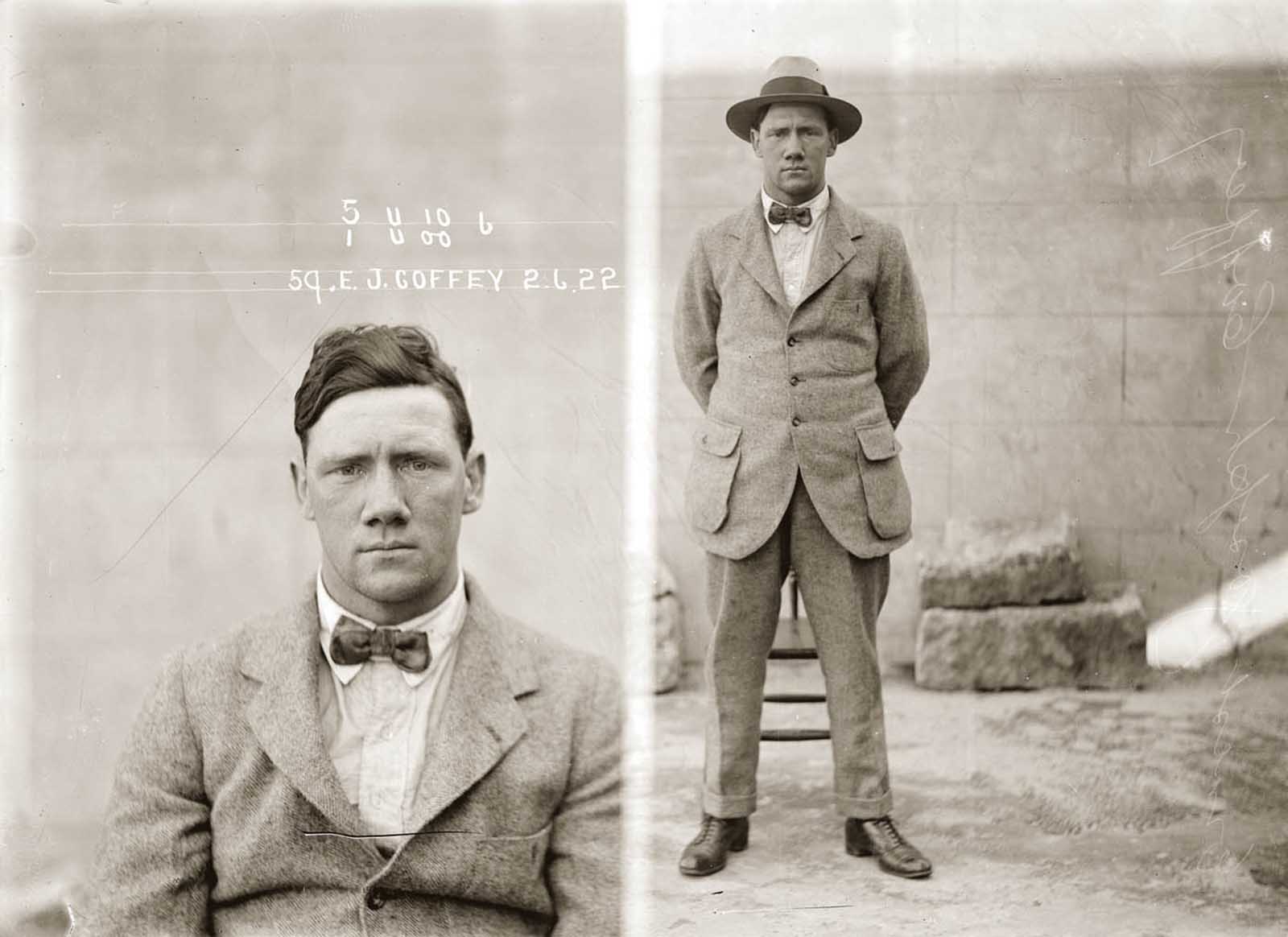 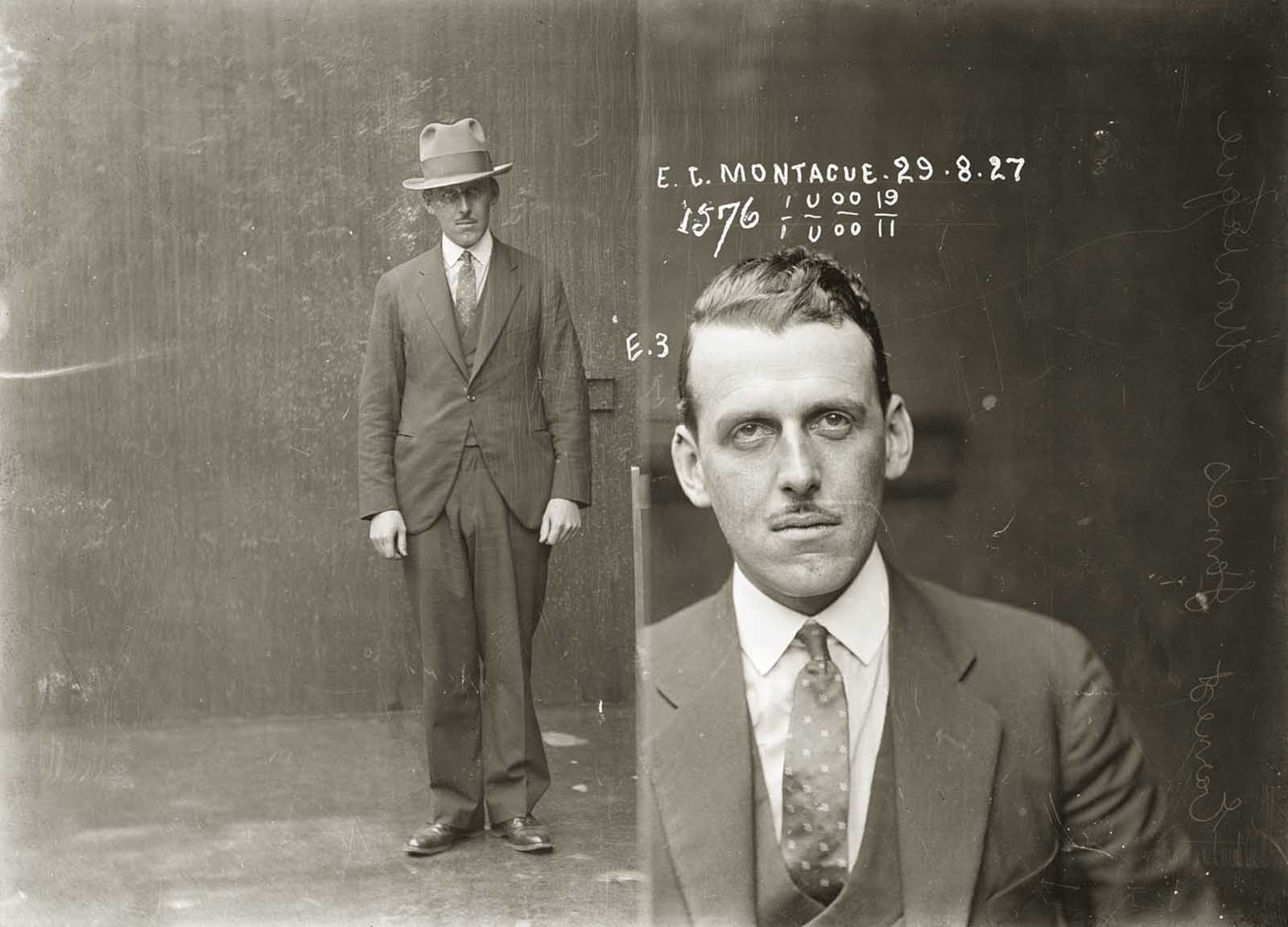 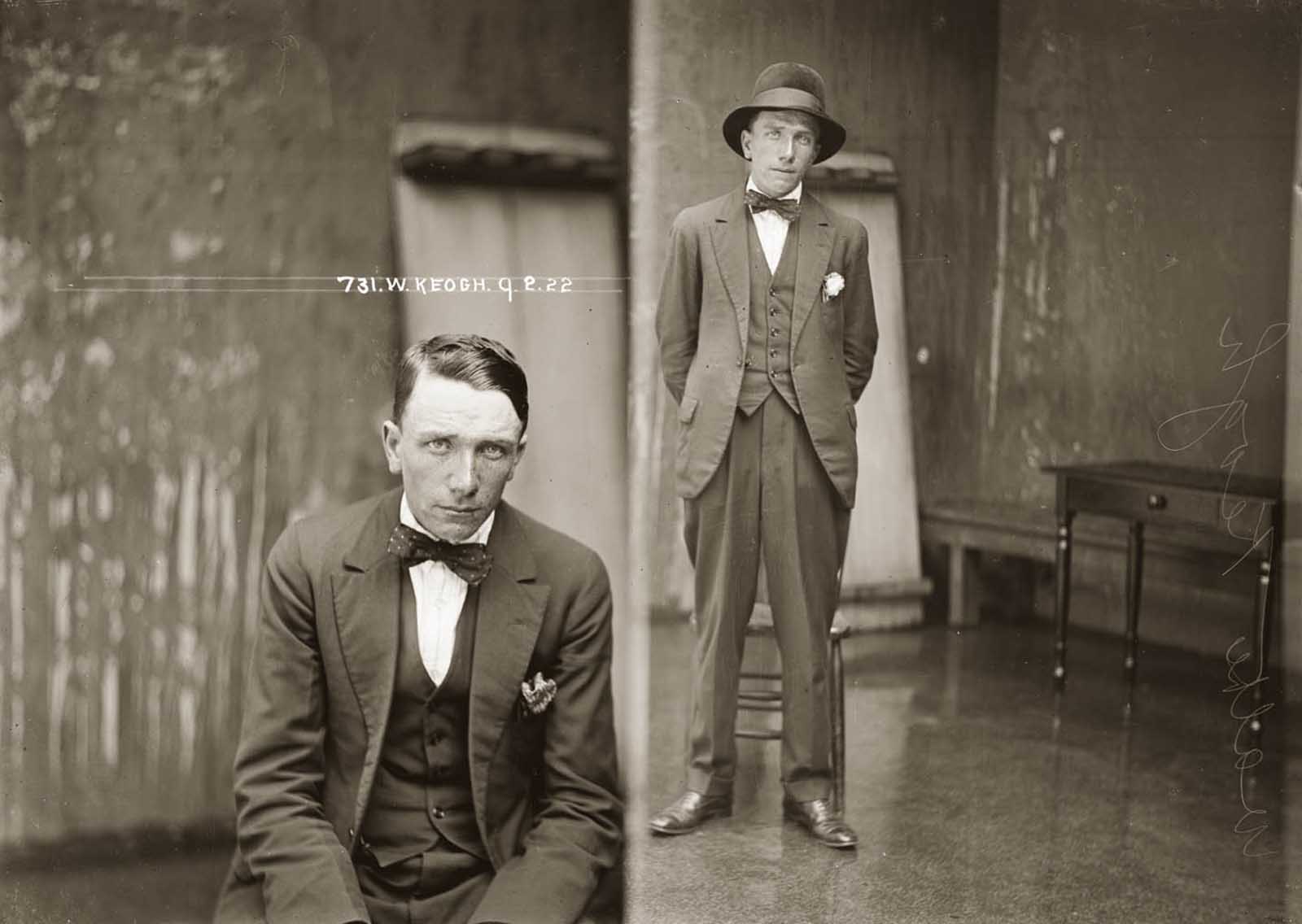 Walter Keogh appears in the Photo Supplement to the 1923 NSW Police Gazette (7 February Group 1 p. 4) identified as a pickpocket, and later in 1928 (26 December, Group 4 p. 15) as a ‘suspected person and bogus land salesman’.

Keogh was also profiled in exposes in the newspaper Truth in 1928, as a ‘go-getter’, ie a con man who sells suburban building blocks at grossly inflated prices, by falsely leading the buyers to believe the lots may be promptly resold for a huge profit. 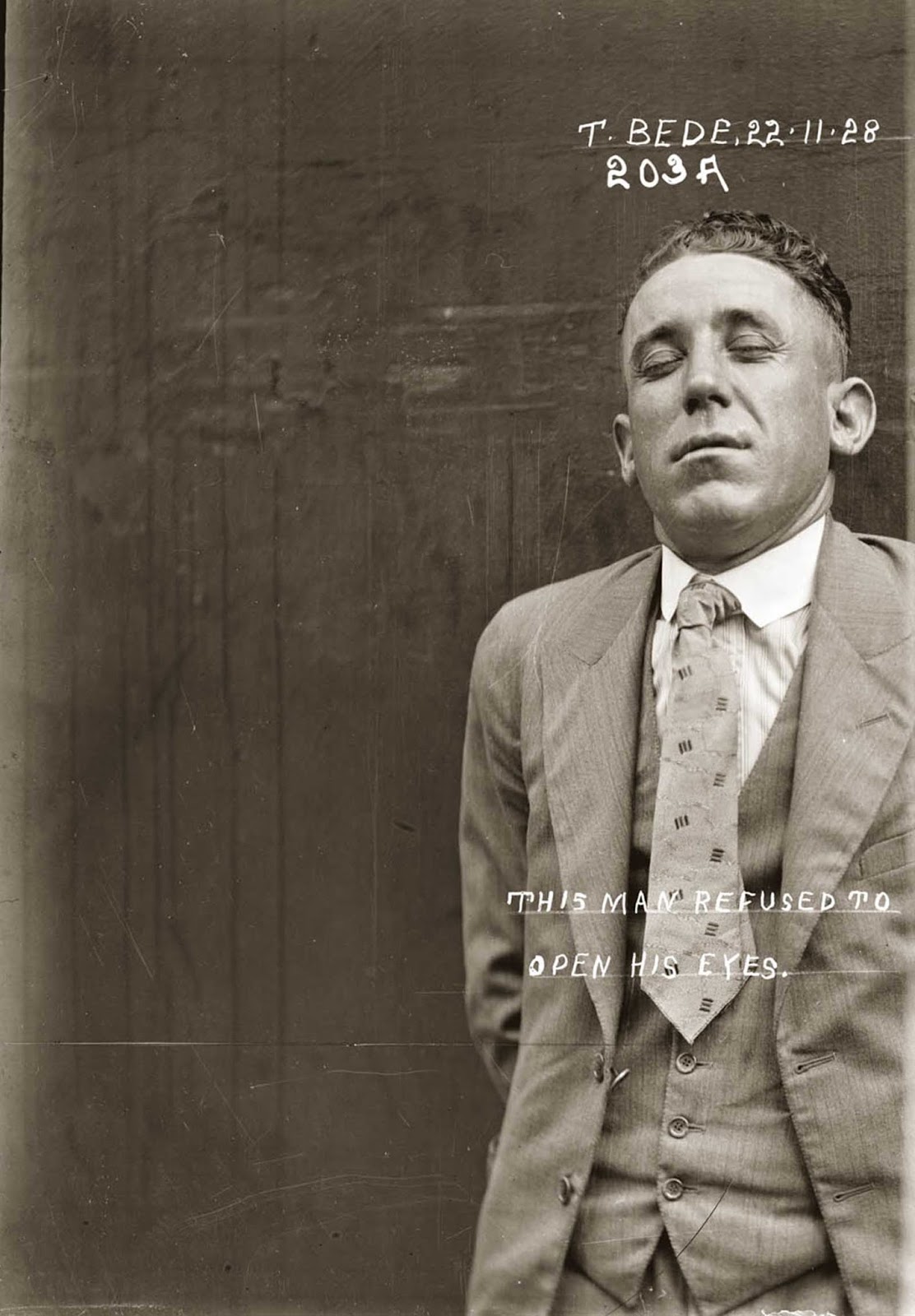 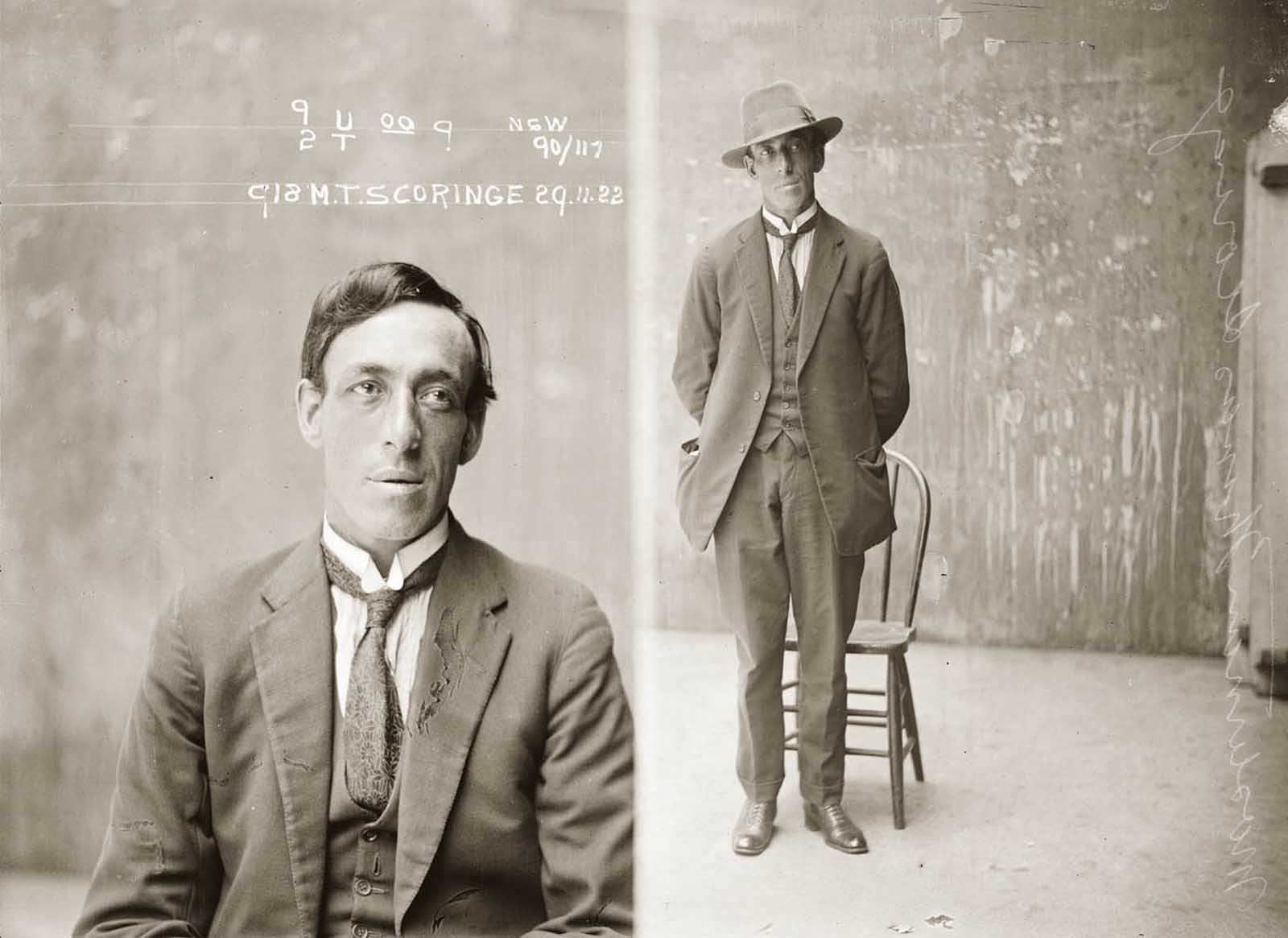 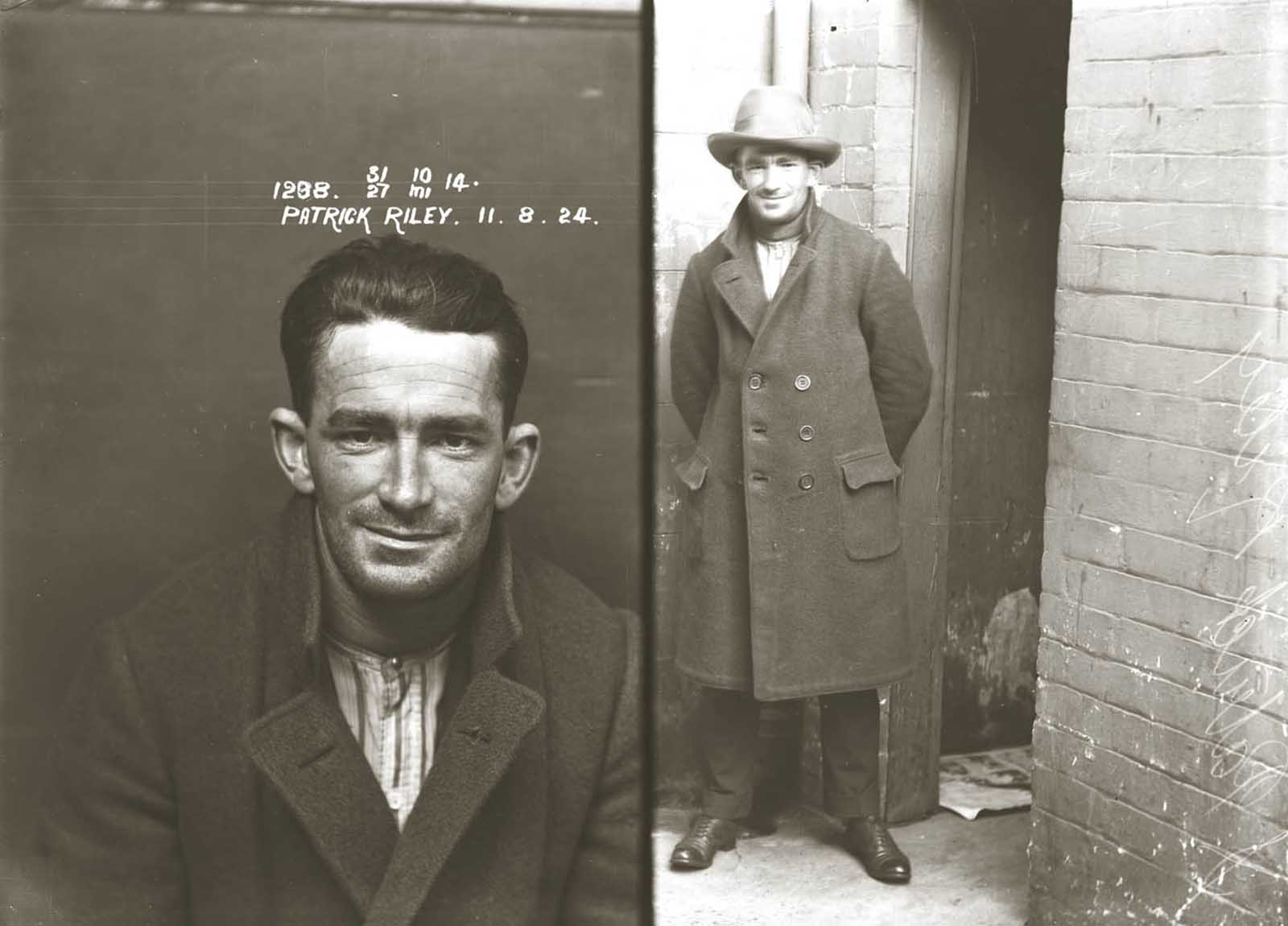 Patrick Riley (alias Matthew Edward Riley) was convicted in October 1924 of making counterfeit coins, and of having a coining instrument (ie a mould) in his possession, for which he was sentenced to two years imprisonment with hard labour. 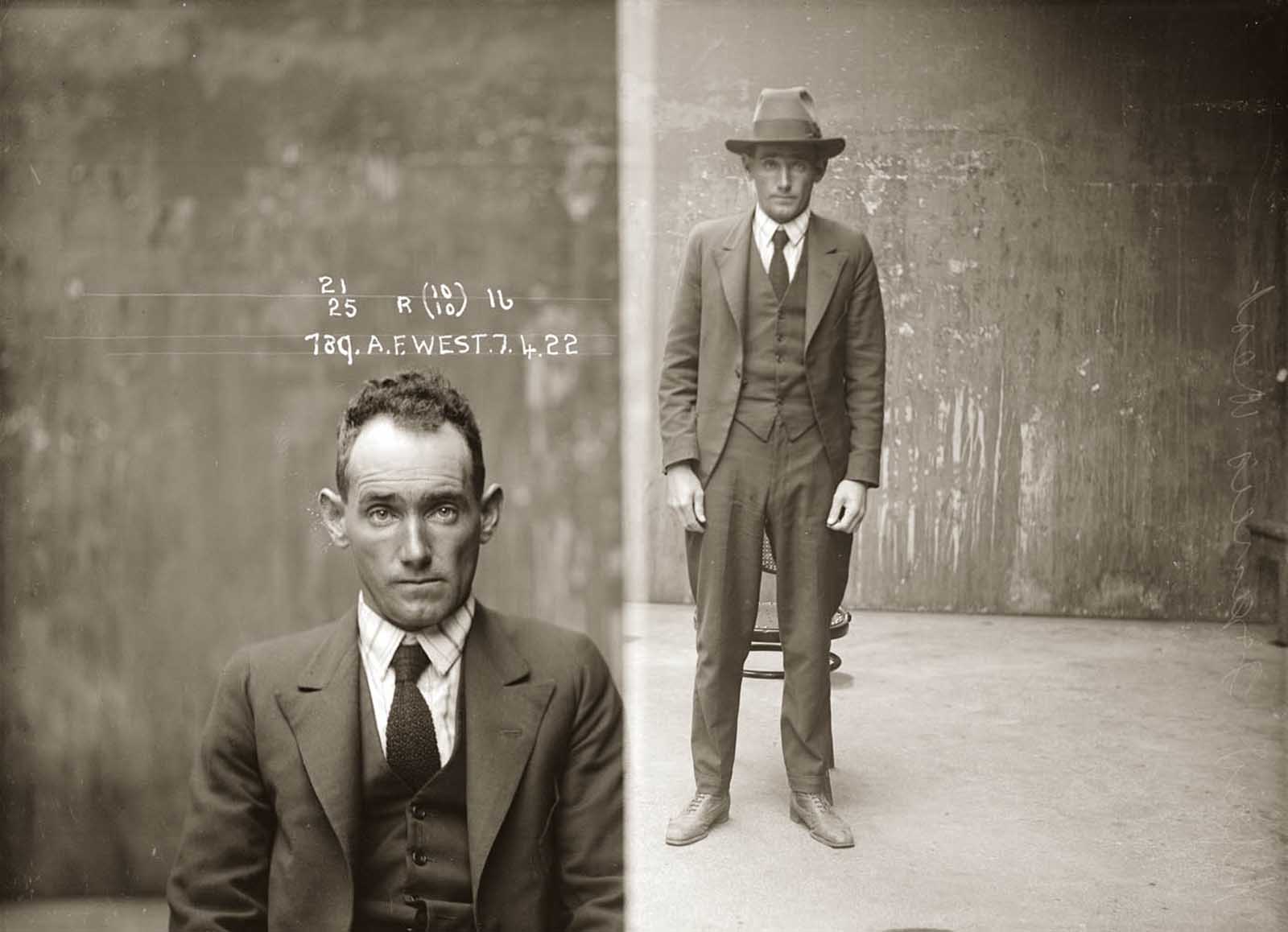 West is mentioned in the NSW Criminal Register as a ‘pickpocket and spieler’. 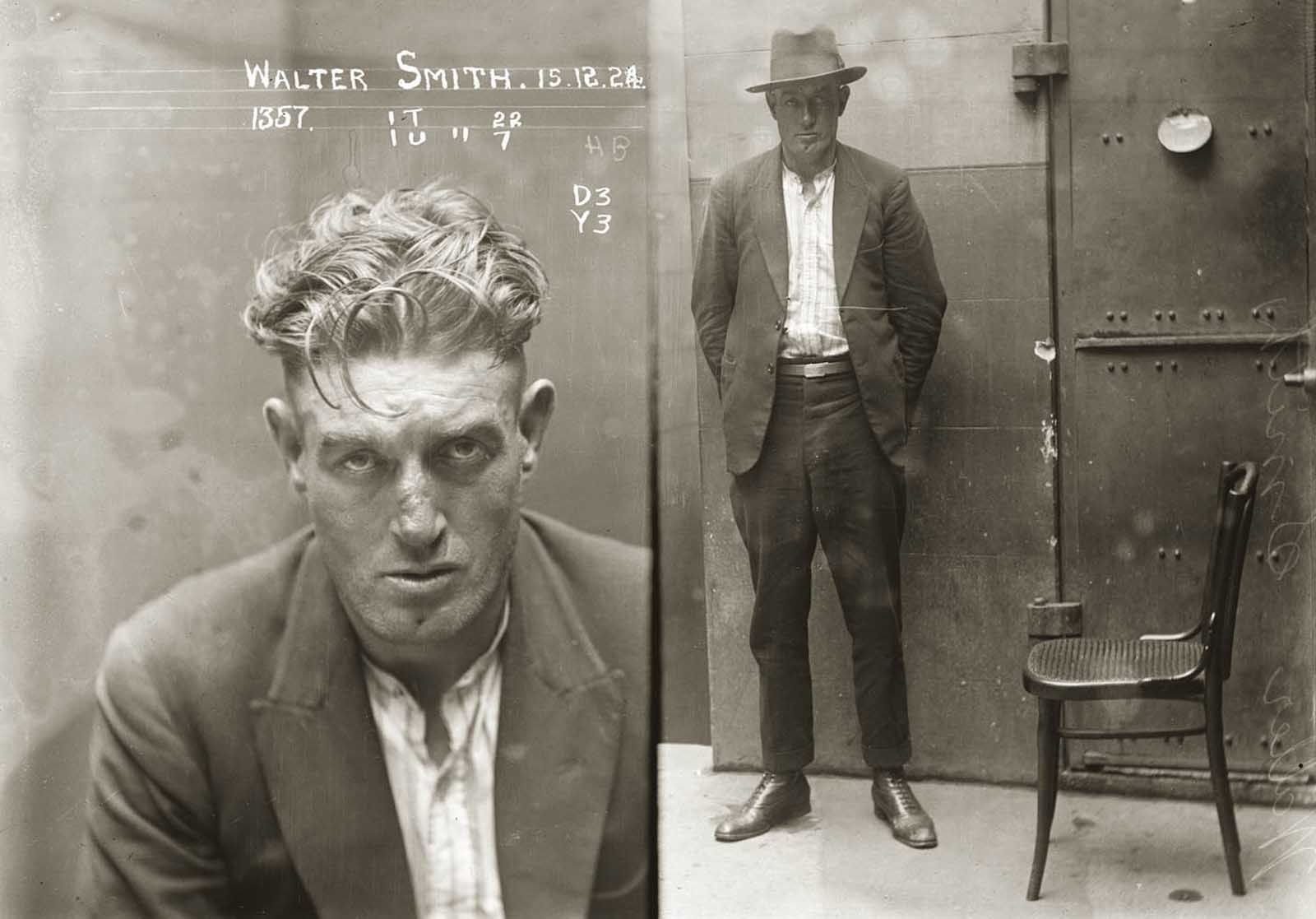 Walter Smith is listed in the NSW Police Gazette, 24 December 1924, as ‘charged with breaking and entering the dwelling-house of Edward Mulligan and stealing blinds with a value 20 pounds (part recovered)’, and with ‘stealing clothing, a value of 26 pounds (recovered) in the dwelling house of Ernest Leslie Mortimer.’ Sentenced to 6 months hard labour. 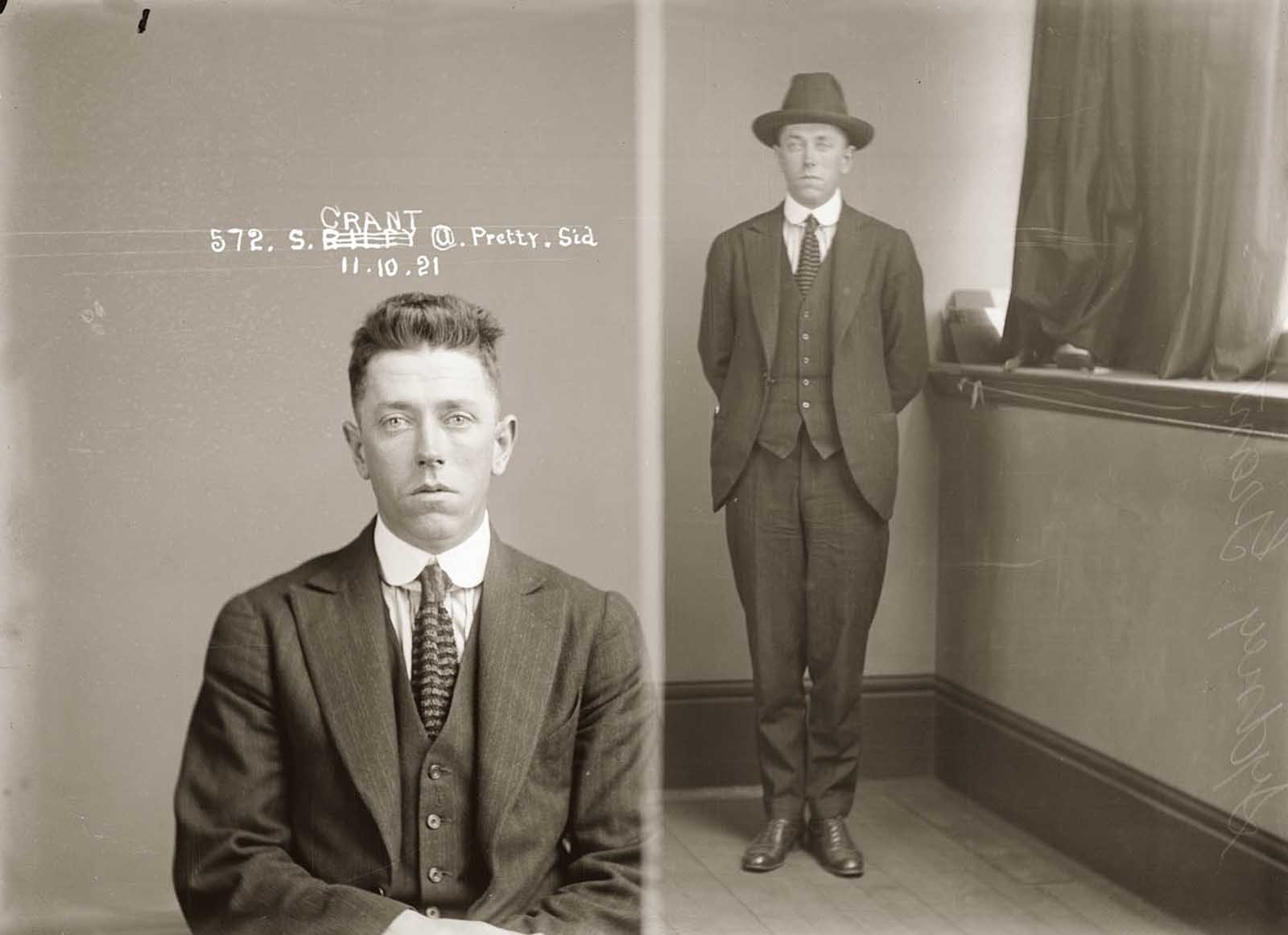 In his landmark sociological work, The Big Con (first published in 1940) David Maurer describes a con trick known as “the hot-seat”, then being practiced in Europe by “such masters of their profession as Pretty Sid, Snowy T-, Kangaroo John, Melbourne Murray, Devil’s Island Eddie, Slab B[rennan]…”

It was not unusual then for the most accomplished Australian con artists to seek fresh fields in Britain, Europe (especially France) and North America, where their skills were held in high regard by fellow professionals. 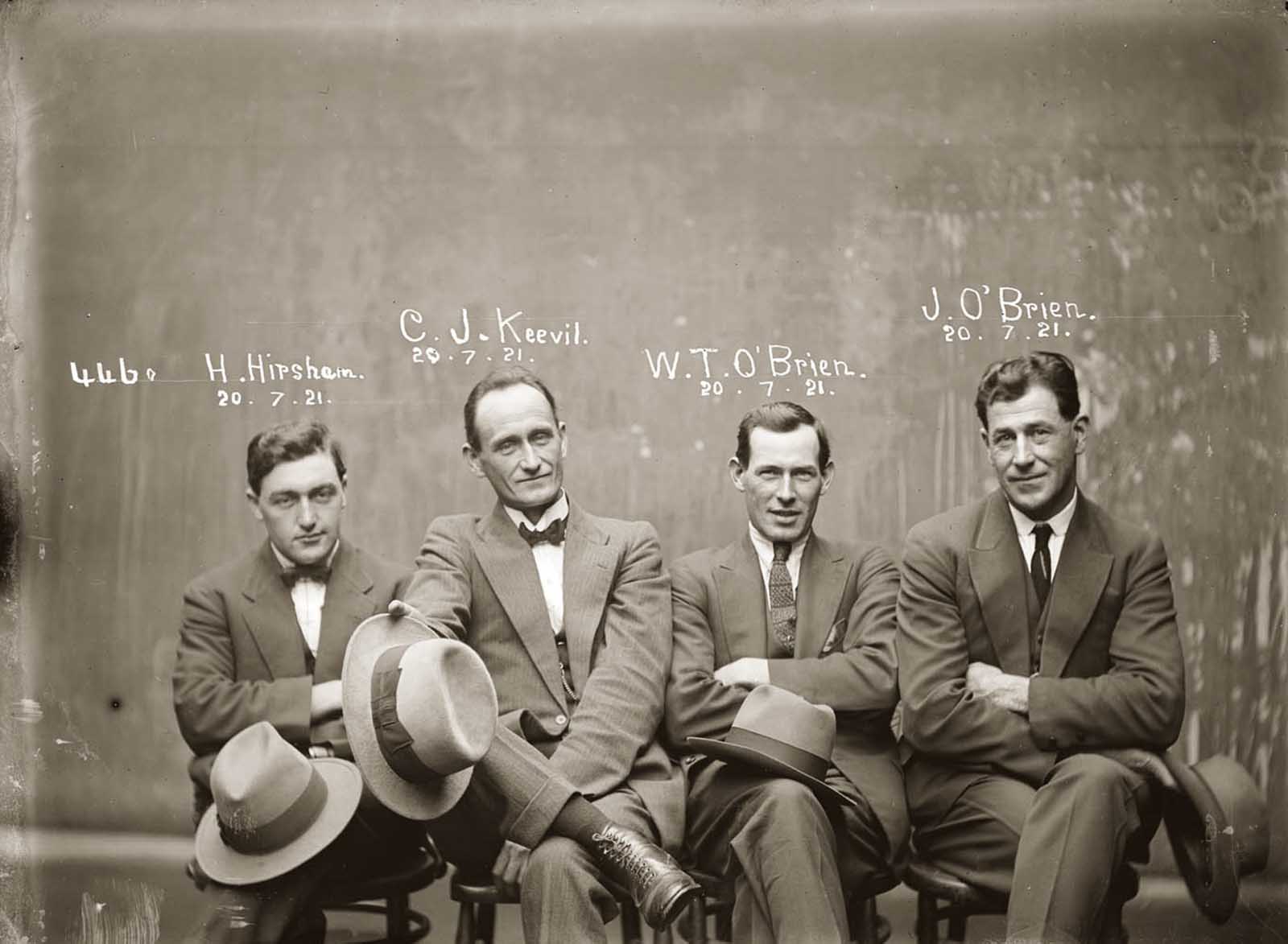 The quartet pictured were arrested over a robbery at the home of bookmaker Reginald Catton, of Todman avenue, Kensington, on 21 April 1921. The Crown did not proceed against Thomas O’Brien but the other three were convicted and received sentences of fifteen months each. 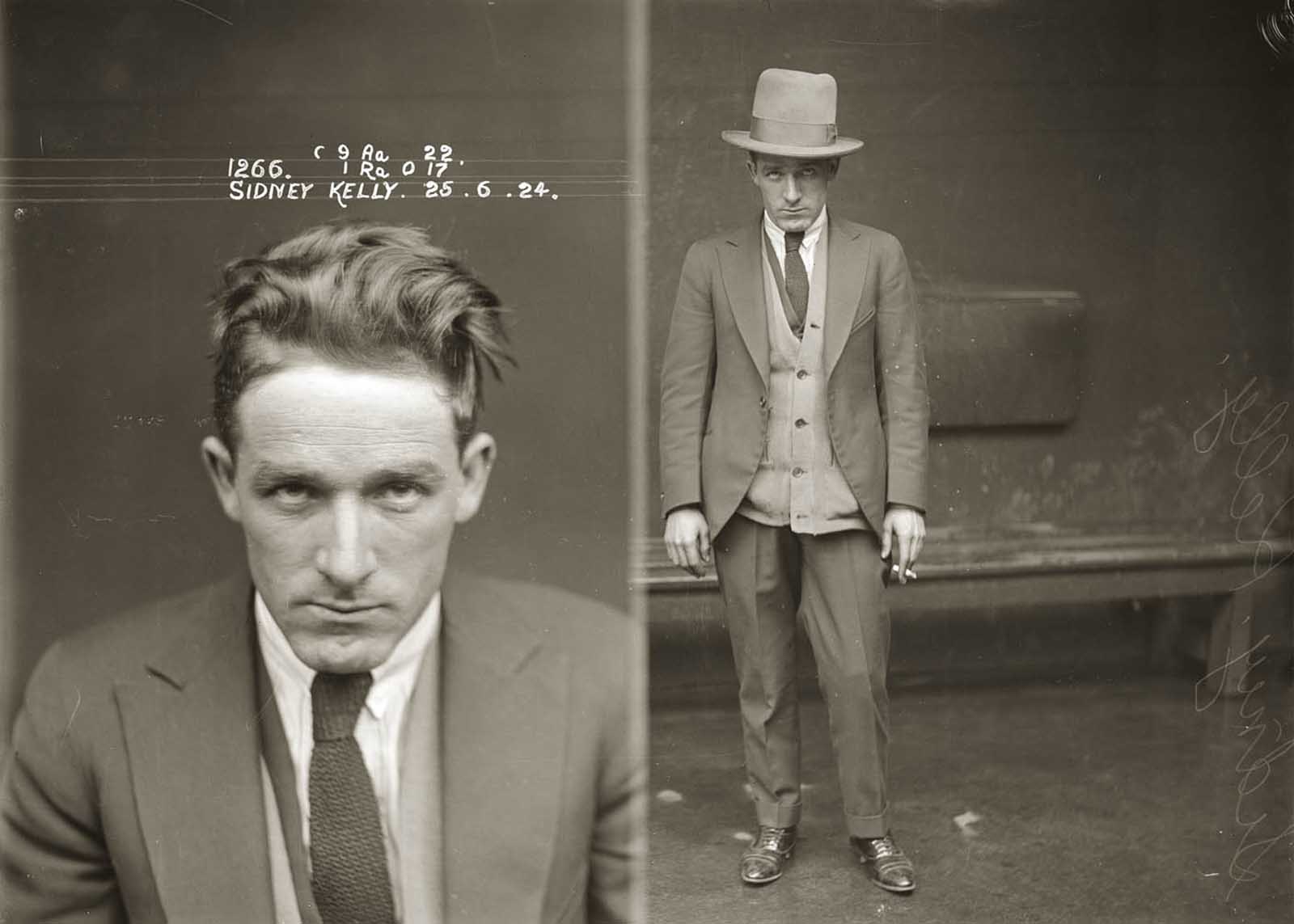 Details surrounding this particular photograph are unknown, but Sidney Kelly was arrested many times and much written about in newspapers during the 1920s, 30s and 40s.

He was charged with numerous offences including shooting, and assault, and in the 1940s was a pioneer of illegal baccarat gaming in Sydney. This image appears in the Photo Supplement to the NSW Police Gazette, 26 July 1926, p. 6 captioned, “Illicit drug trader. Drives his own motor car, and dresses well. Associates with criminals and prostitutes”. 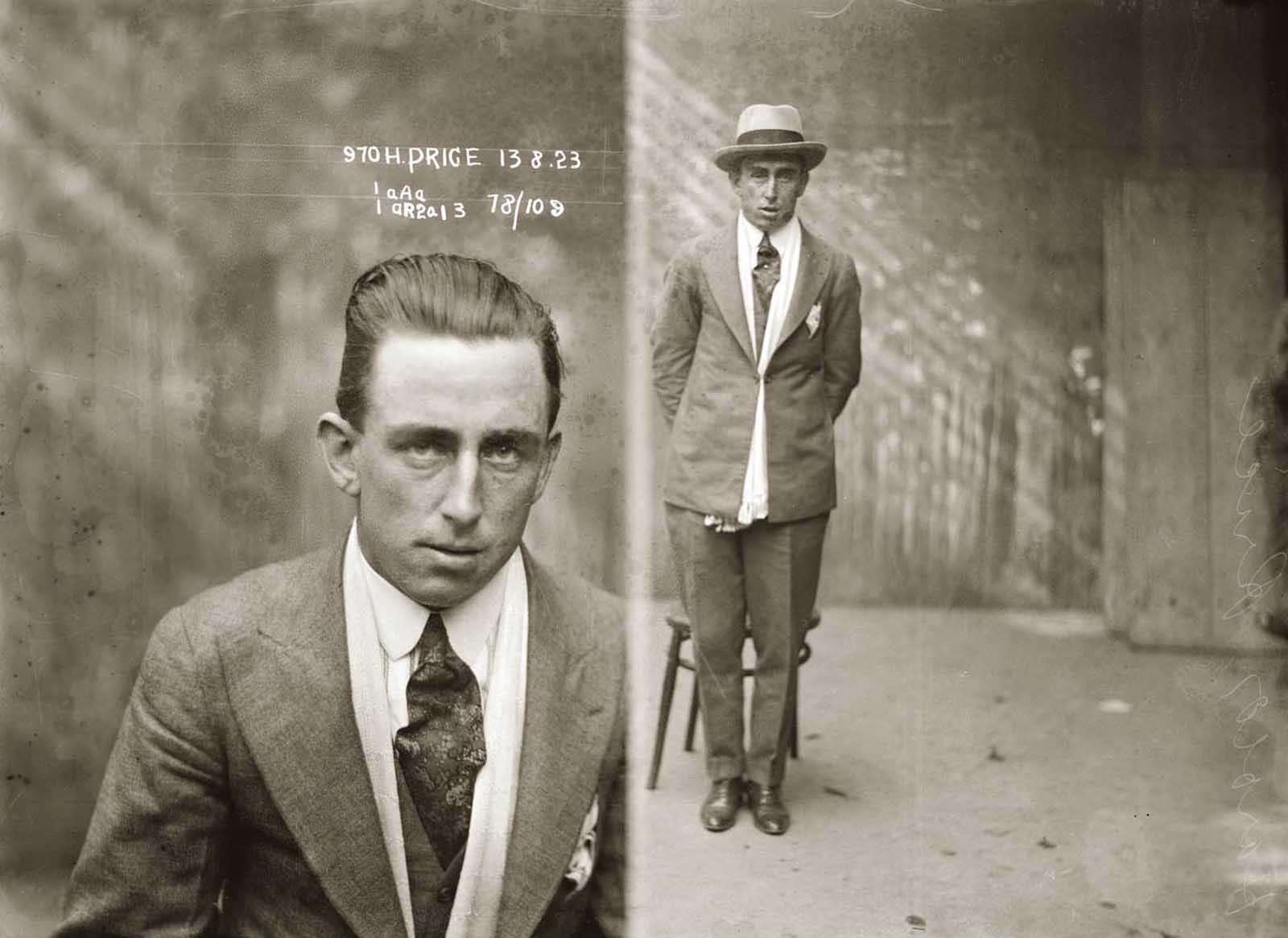 Harold Price was a thief and gunman. This photograph was taken after he was was arrested and charged with committing robbery under arms at a house in Randwick, Sydney, for which he was sentenced to two years hard labour. 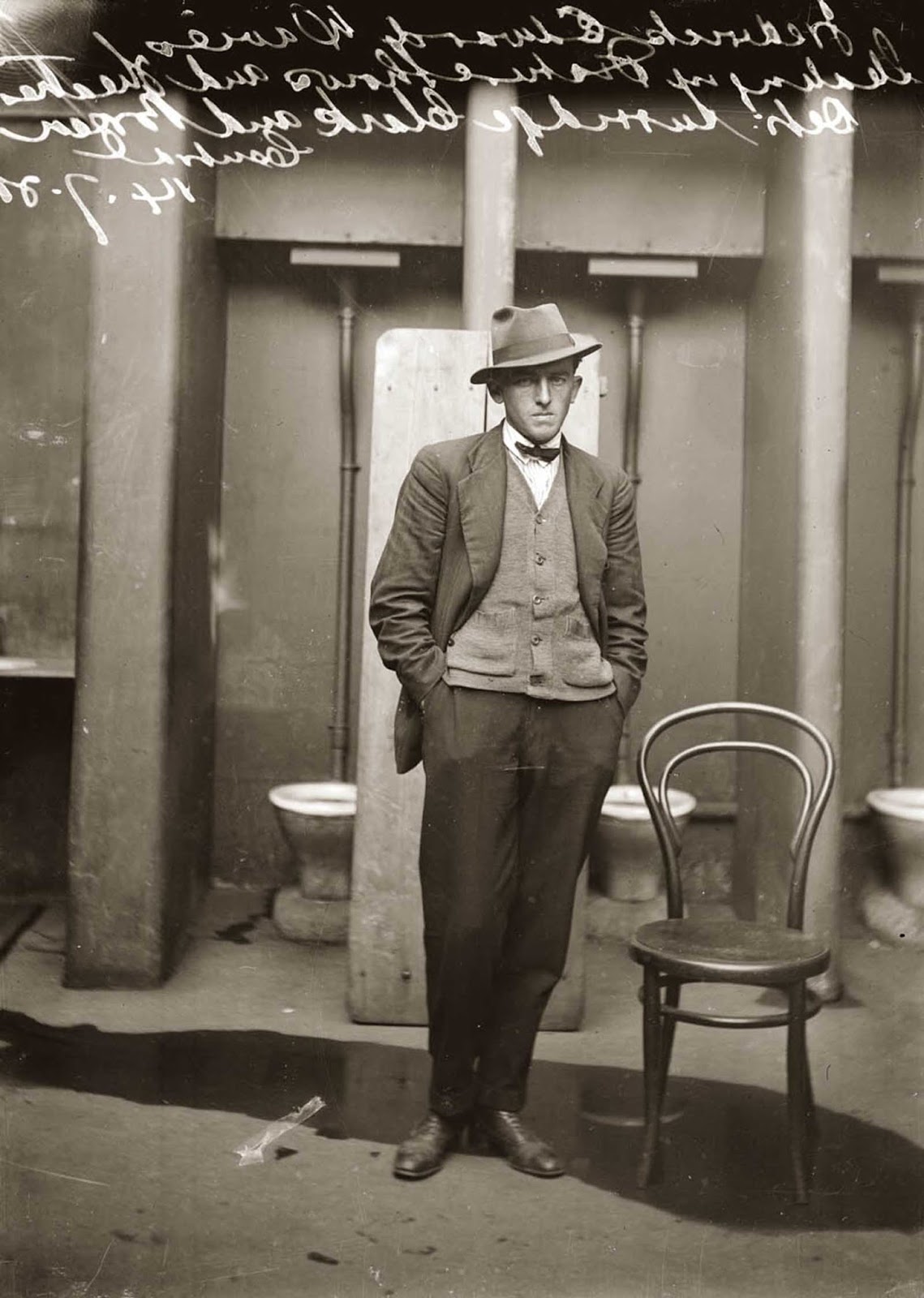 Police held sneak thieves in particularly low regard, which may account for the decision to photograph Davies in front of the police station’s toilet stalls. 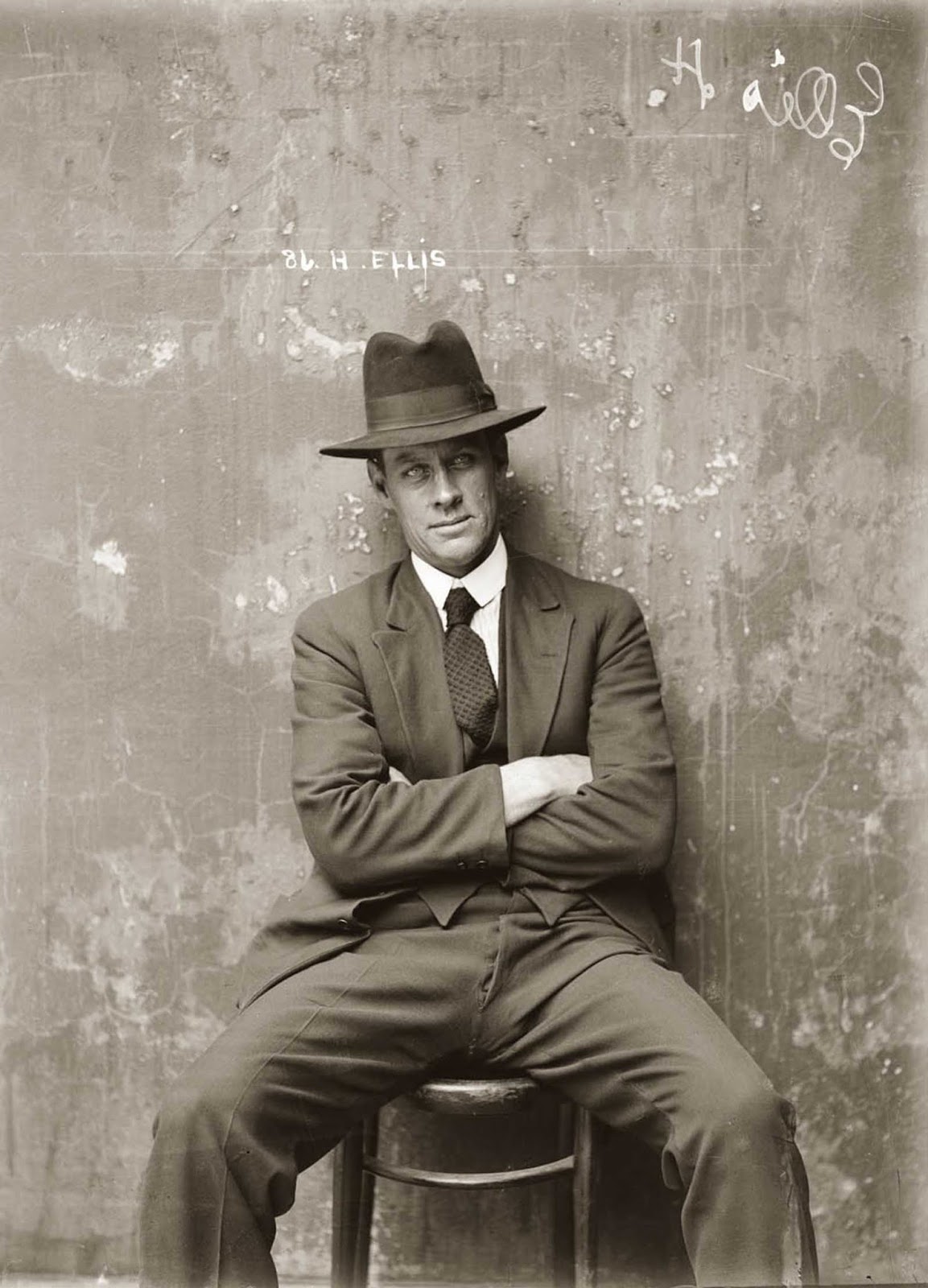 The precise circumstances surrounding this picture are unknown, but Ellis is found in numerous police records of the 1910s, 20s and 30s. He is variously listed as a housebreaker, a shop breaker, a safe breaker, a receiver and a suspected person.

A considerably less self-assured Ellis appears in the NSW Criminal Register of 29 August 1934 (no. 206). His convictions by then include ‘goods in custody, indecent langauge, stealing, eceiving and throwing a missile. 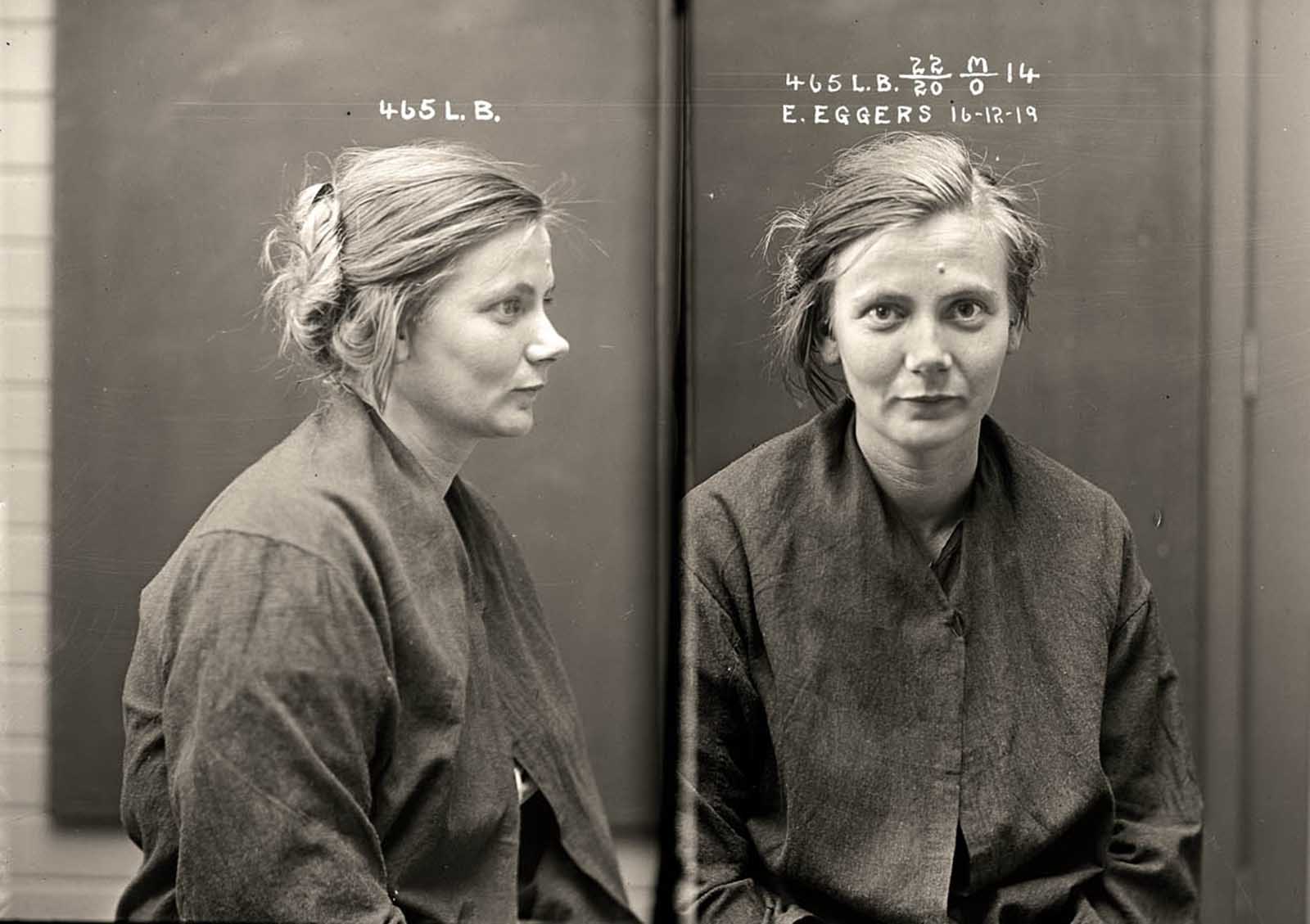 Crime: malicious injury to property and wounding with intent to do grievous bodily harm. When a police officer arrived to arrest Esther Eggers for malicious damage she attacked him, causing serious injury. Eggers was sentenced to 12 months in prison. Aged 22.