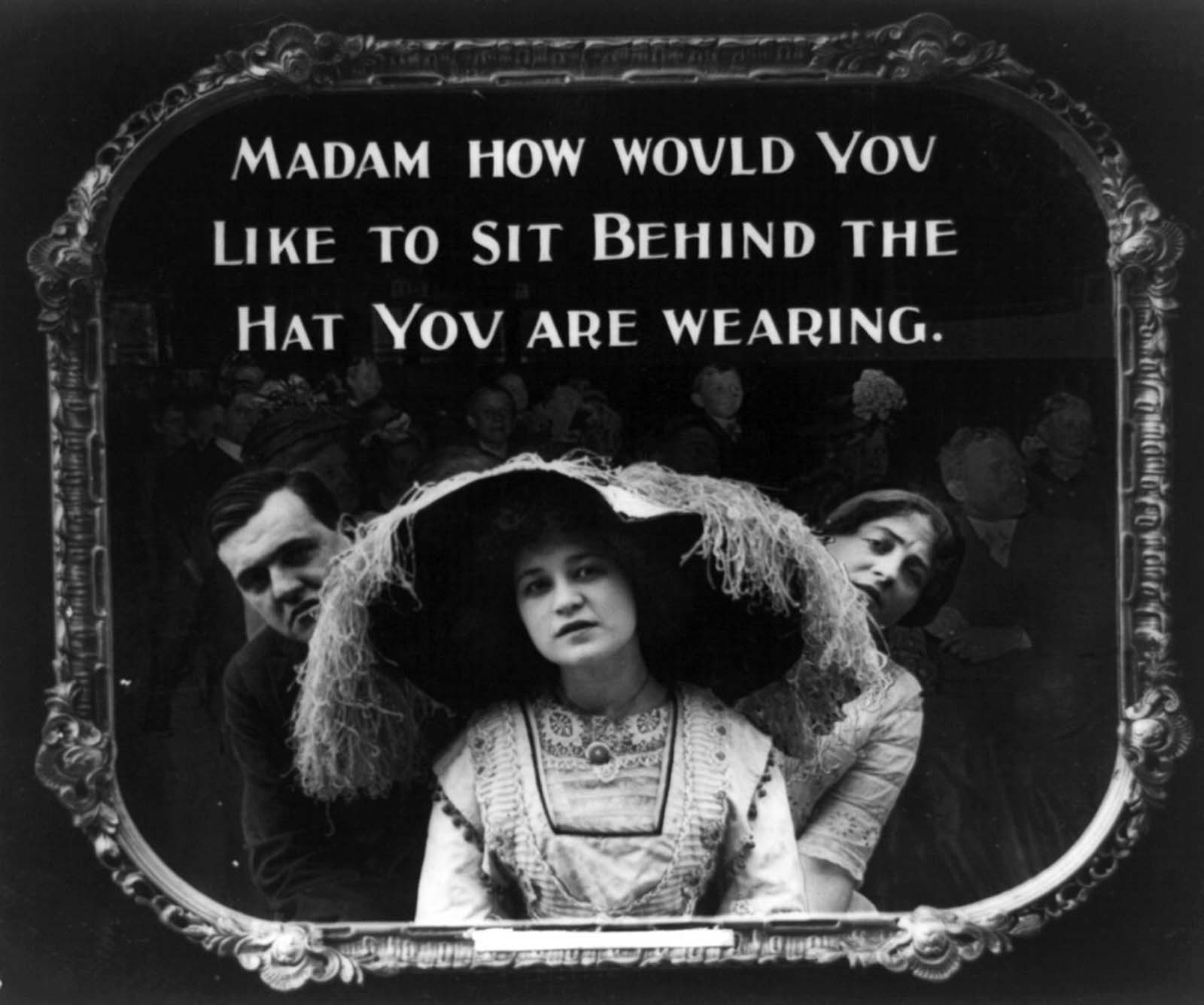 During the era of silent film, recommendations for behavior were displayed on title cards before a screening, offering advice including “Ladies, kindly remove your hats”, “Loud talking or whistling not allowed”, “Please applaud with hands only”, etc.

The Library of Congress writes: “As middle-class mass entertainments gained increasing popularity in the late nineteenth century, so did the impetus to instruct this new audience in the ways of appropriate public behavior.”

Moreover, these slides had another function. Most early movie theaters had only one projector so glass slides (or lantern slides, as they were originally called) were used as pauses when reels were being worked on or changed. As seen through these vintage photos, these glass slides often featured lighthearted instructions for proper behavior while viewing a film.

Some of the movie etiquette posters of the era focused on an element of womens’ wardrobes that we often forget in the modern world. Apparently, stylish and enormous hats presented quite a big problem for movie-goers – especially if you were seated behind a woman wearing a particularly grandiose hat.

Other posters focused on applause over whistling. Back in the day, loud whistling with fingers in your mouth was all the rage. Another poster prohibited loud talking and whistling. Nowadays talking is frowned upon in the movie theatre, but this was during the silent film era so some talking was alright. 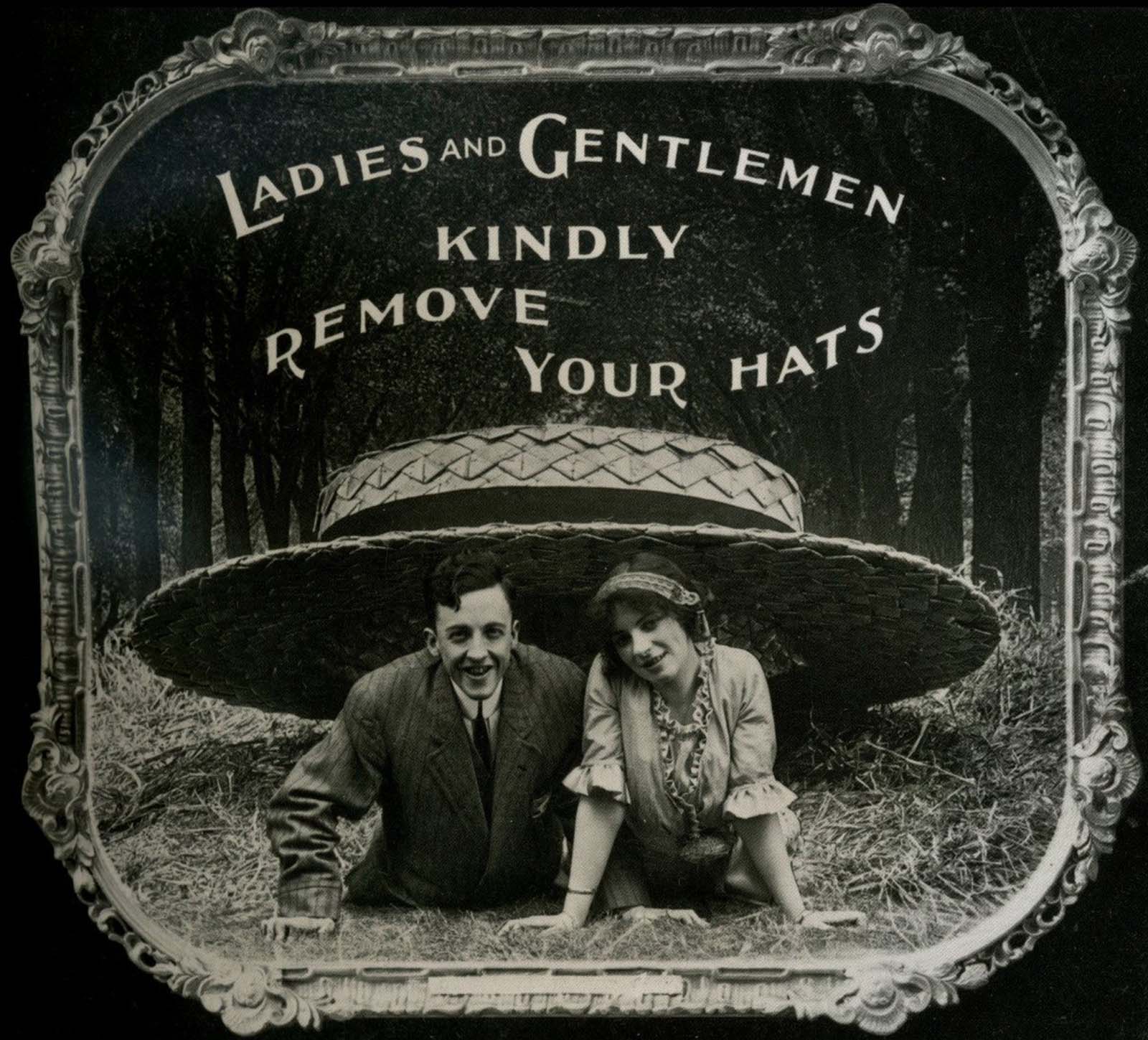 Both men and women were reminded to remove their hats so people who sat behind them would be able to watch the film with clear sight.

Early theaters, especially nickelodeons, were places where women and men mixed much more freely than had been Victorian custom. Cinema scholar Kate Fortmueller writes: “Many of the concerns about the nickelodeon as a rowdy space emerged from the presence of women.”

Eager to expand their profits, early movie theaters, or “nickelodeons”, often put up slides between reel changes encouraging women to attend films (e.g. “Ladies and children are cordially invited to this theatre, no offensive pictures are ever shown here”), as theaters were not considered entirely respectable places.

As more women started attending, nickelodeons had to contend with scoundrels who tried to use the cover of darkness to get fresh with women, leading to the creation of “annoyance”, or in modern parlance, sexual harassment.

Some of the slides show how that concern manifested in a fear for women’s safety, or for their delicate sensibilities; the fact that audiences were a mix of classes and races exacerbated those fears. But female cinema-goers were just as likely to be seen as a problem, given their supposed propensity for wearing big hats and chatting.

By 1910, tens of millions of Americans were visiting nickelodeons and movie theaters every week, drawn by the five-cent price of admission. Films, shown continuously through the day, could be as short as 10 minutes, but patrons could arrive in the middle of a film and stay as long as they liked, taking in comedies, melodramas, dance numbers, and scenic travel documentaries. 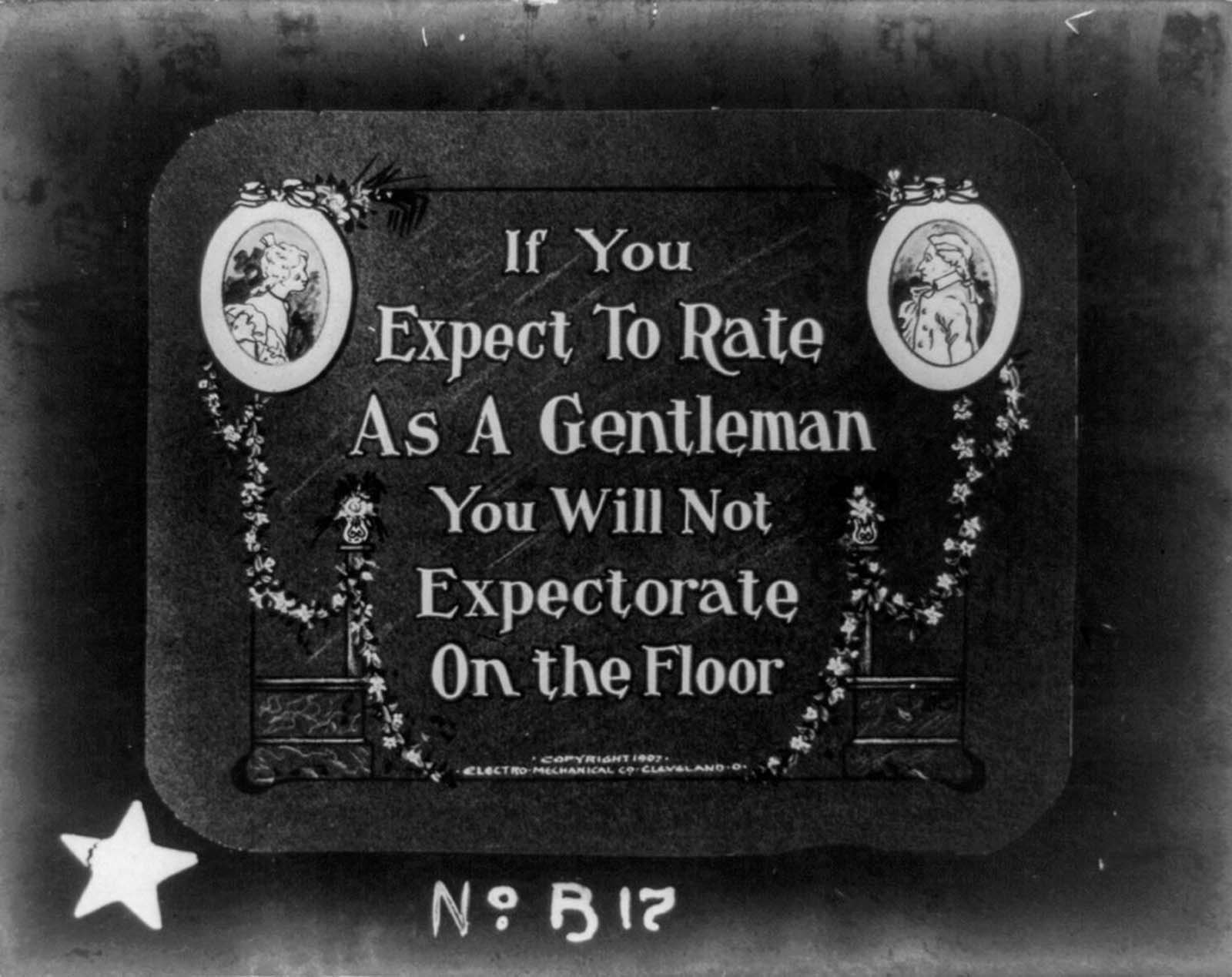 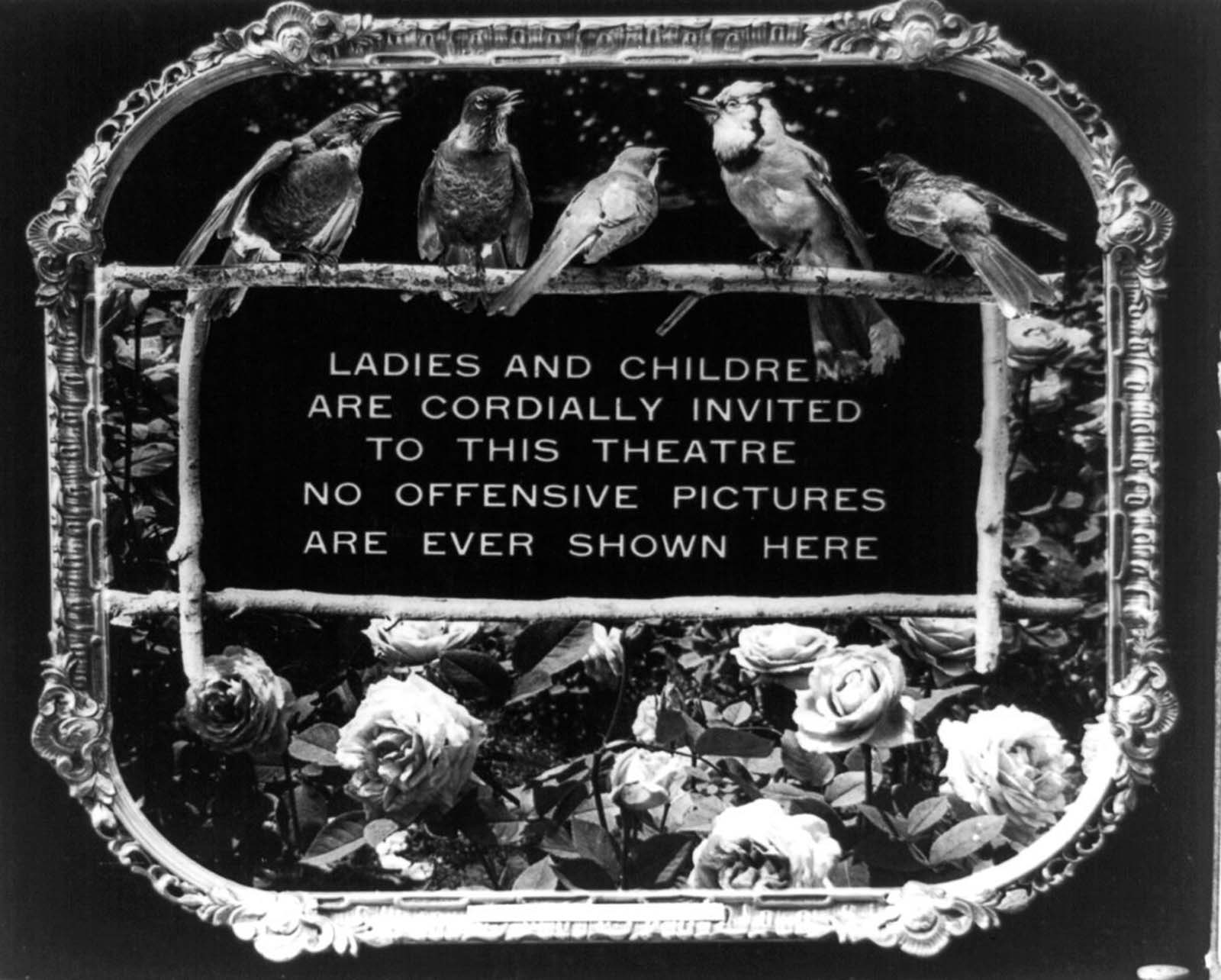 This slider was used to remind parents that children and women are ‘cordially’ invited to watch the film and reassured them ‘no offensive pictures’ are even shown inside the theater. 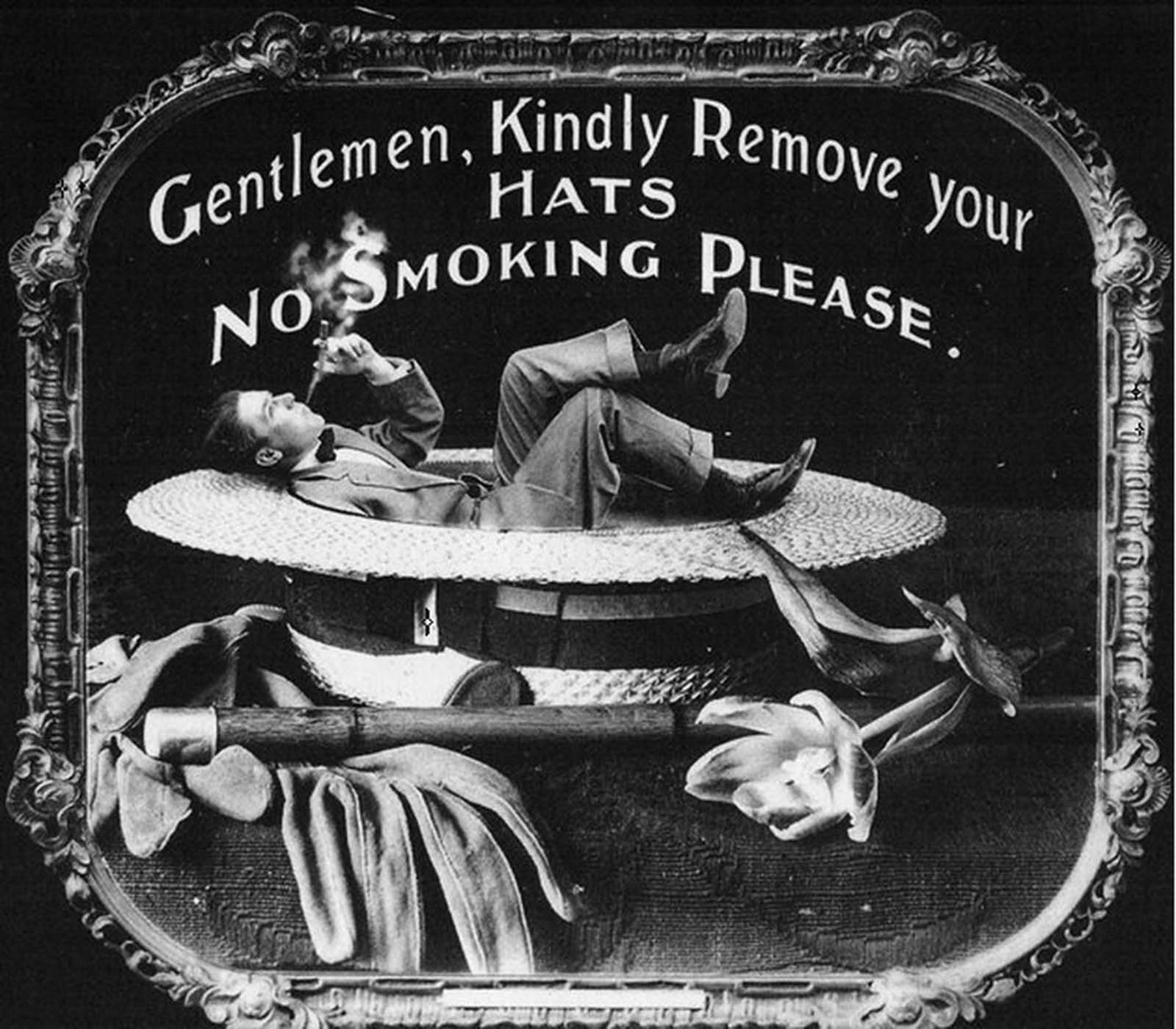 In 1912 those who attended a film screening were told to keep their cigarettes in their pockets. 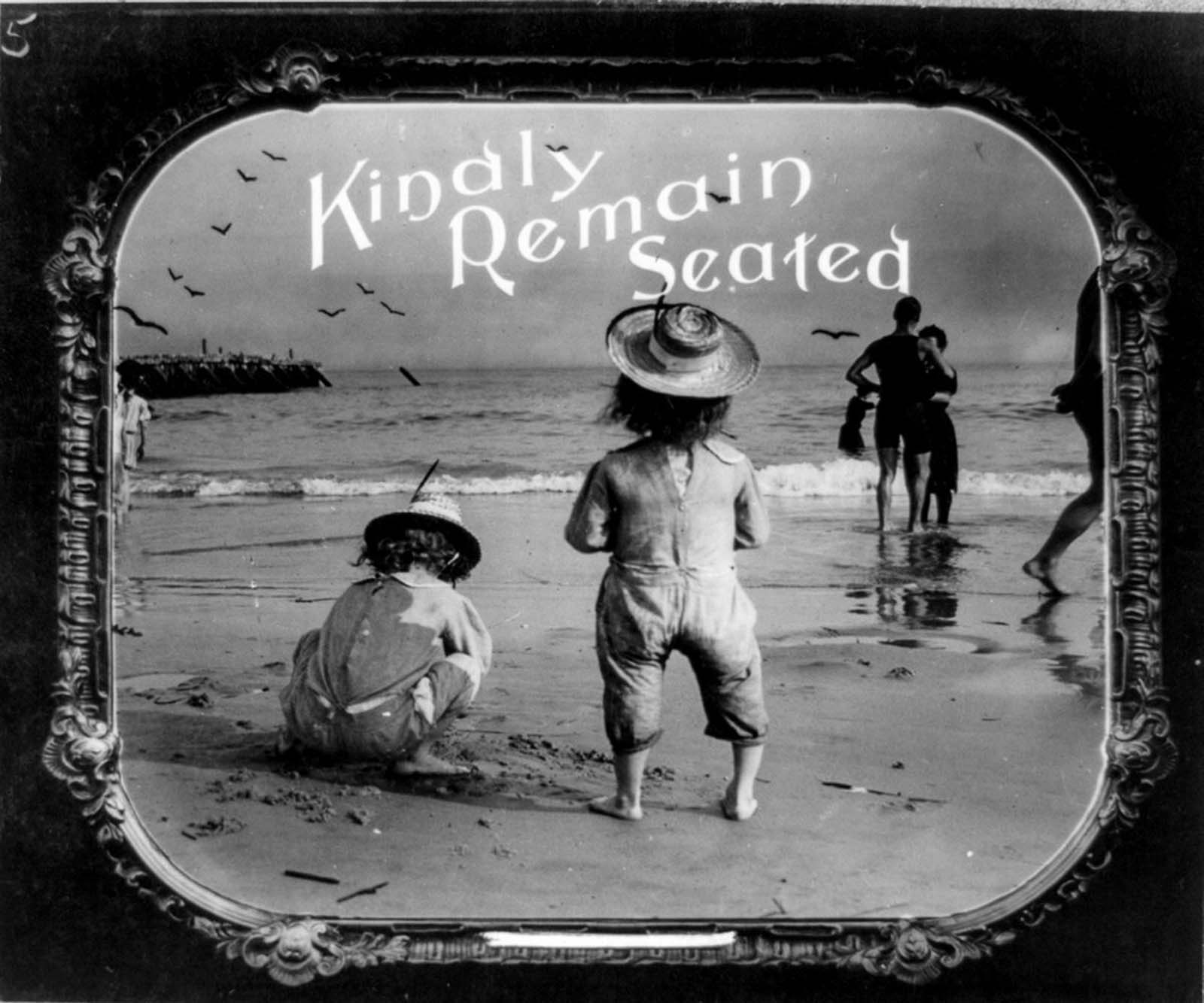 This photograph of two people on a beach was used in one particular poster to tell people in the crowd to ‘remain seated’ during the film. 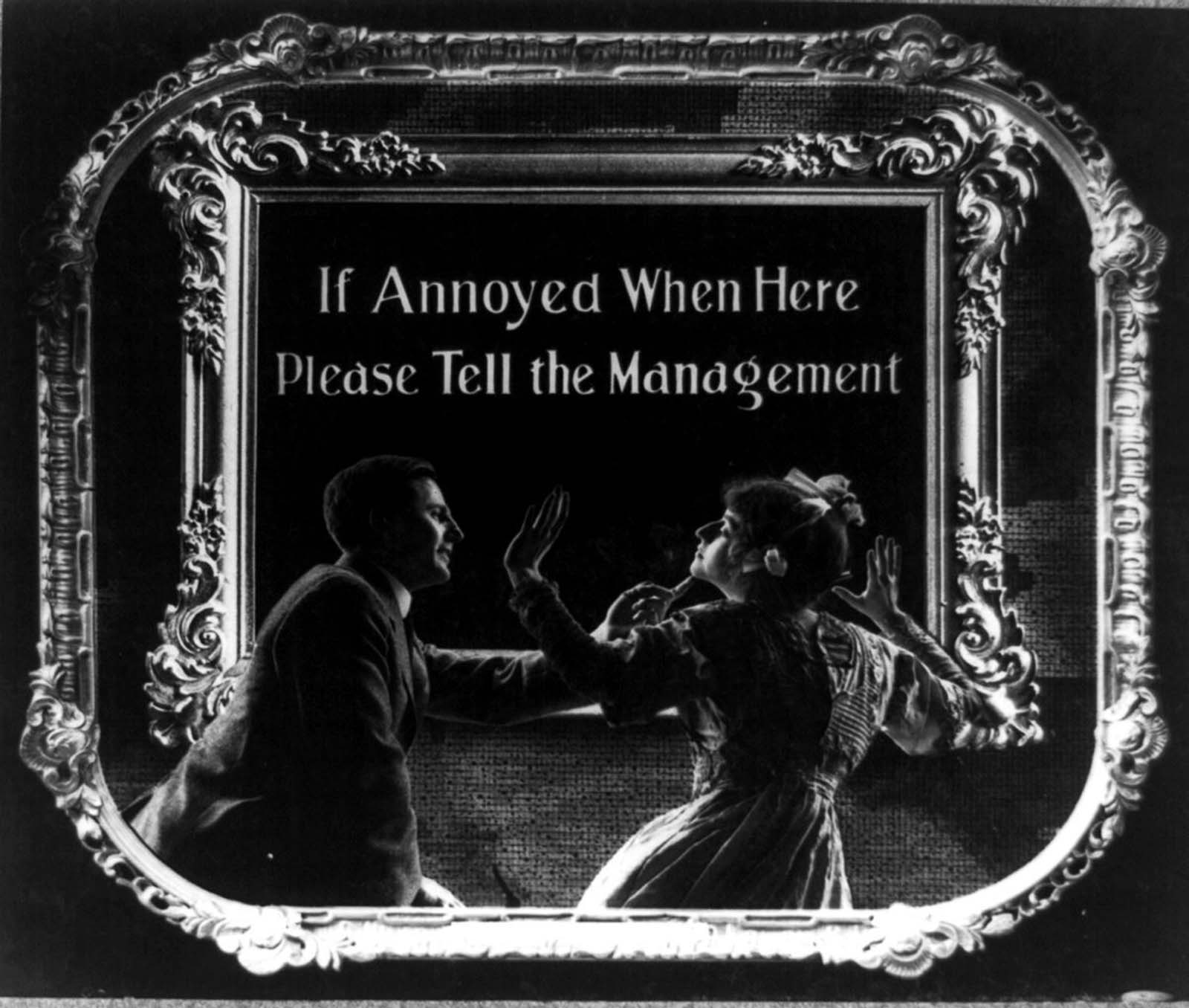 This slider shows a man trying to touch a woman – who is urged to ‘tell the management’ if she is being harassed. 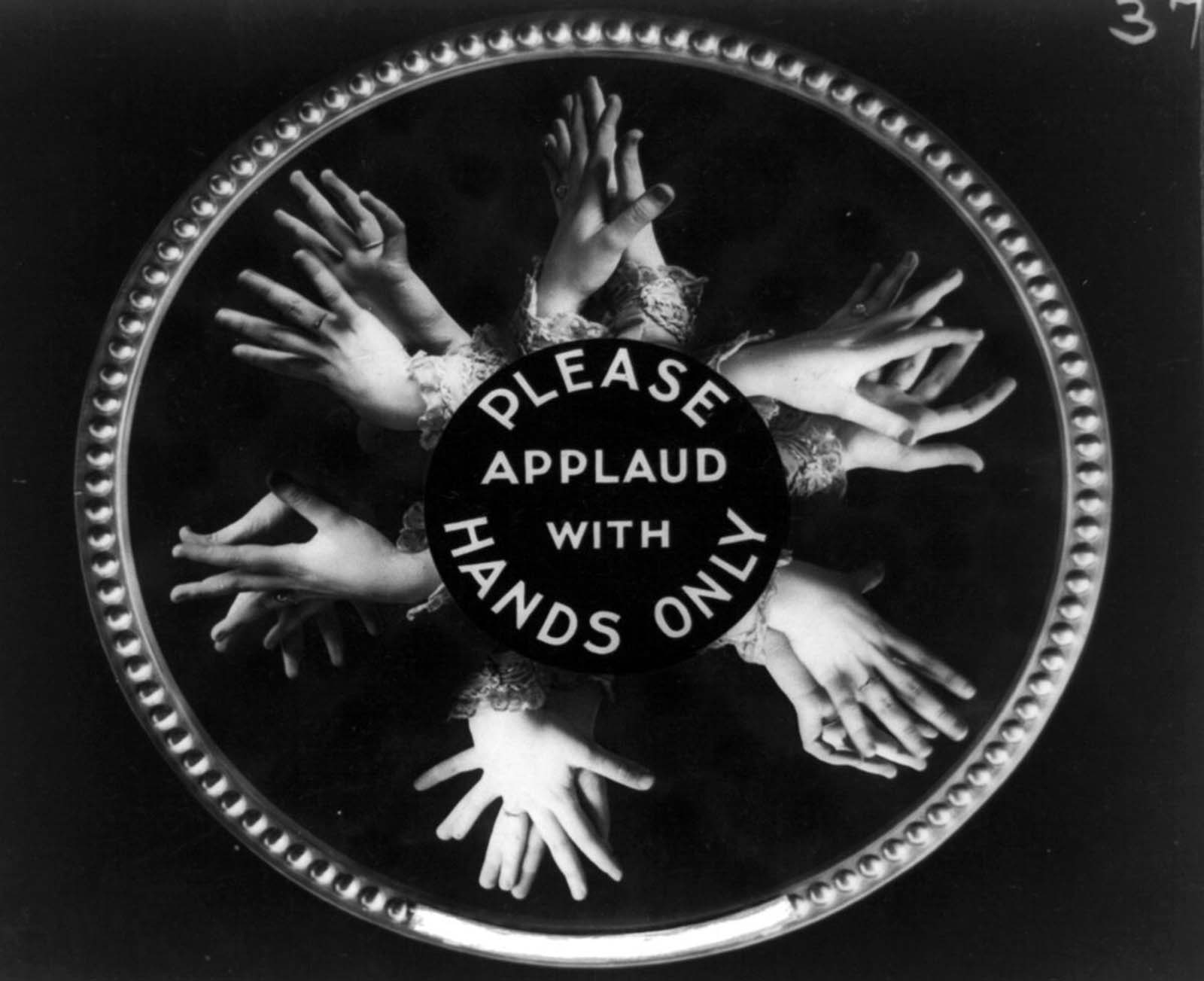 This card urged those in the crowd to simply applaud with their ‘hands only’ and to not scream or shout. 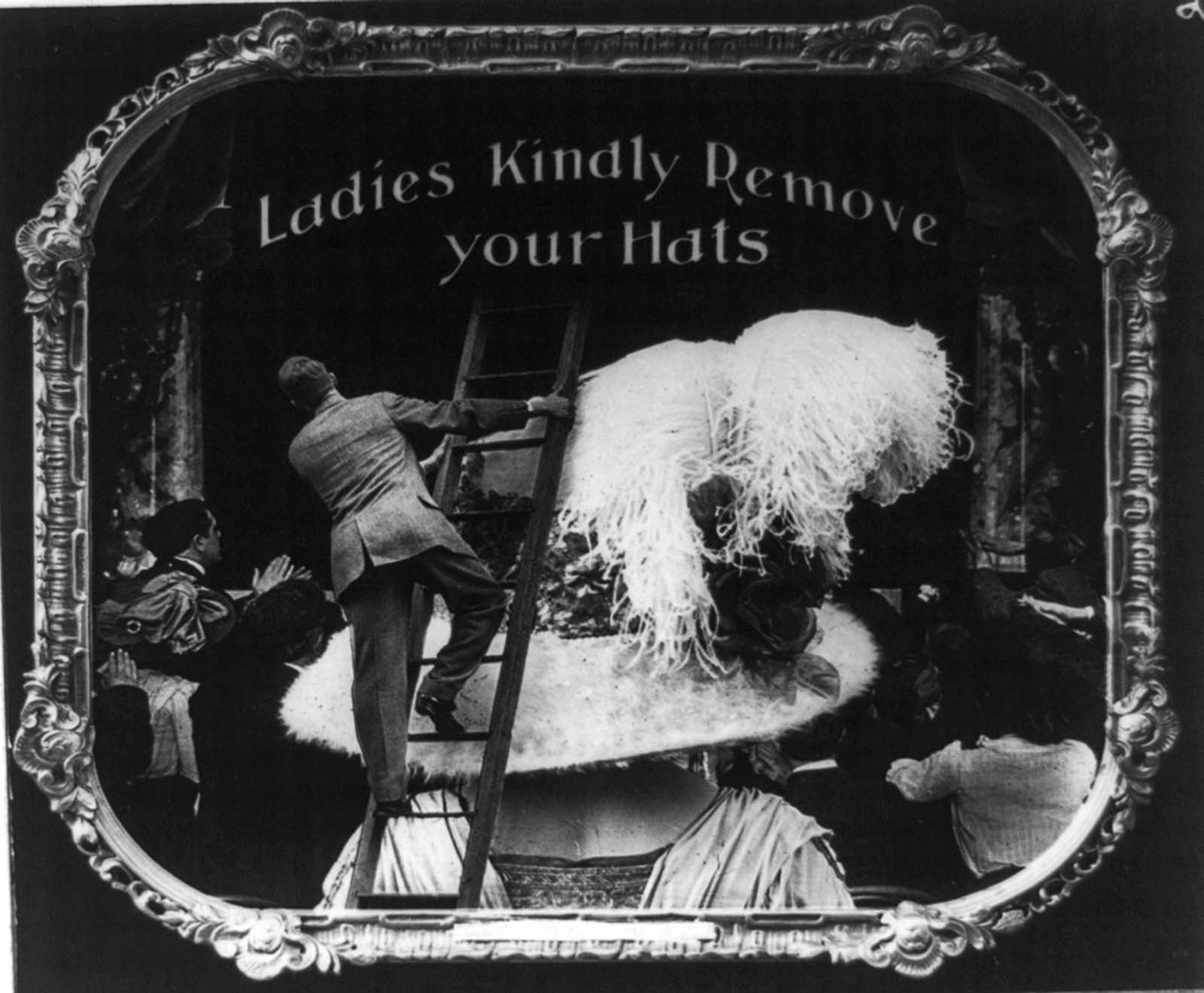 Women were again reminded to remove their hats during the film and this particular message was illustrated with a man using a ladder to see over it. 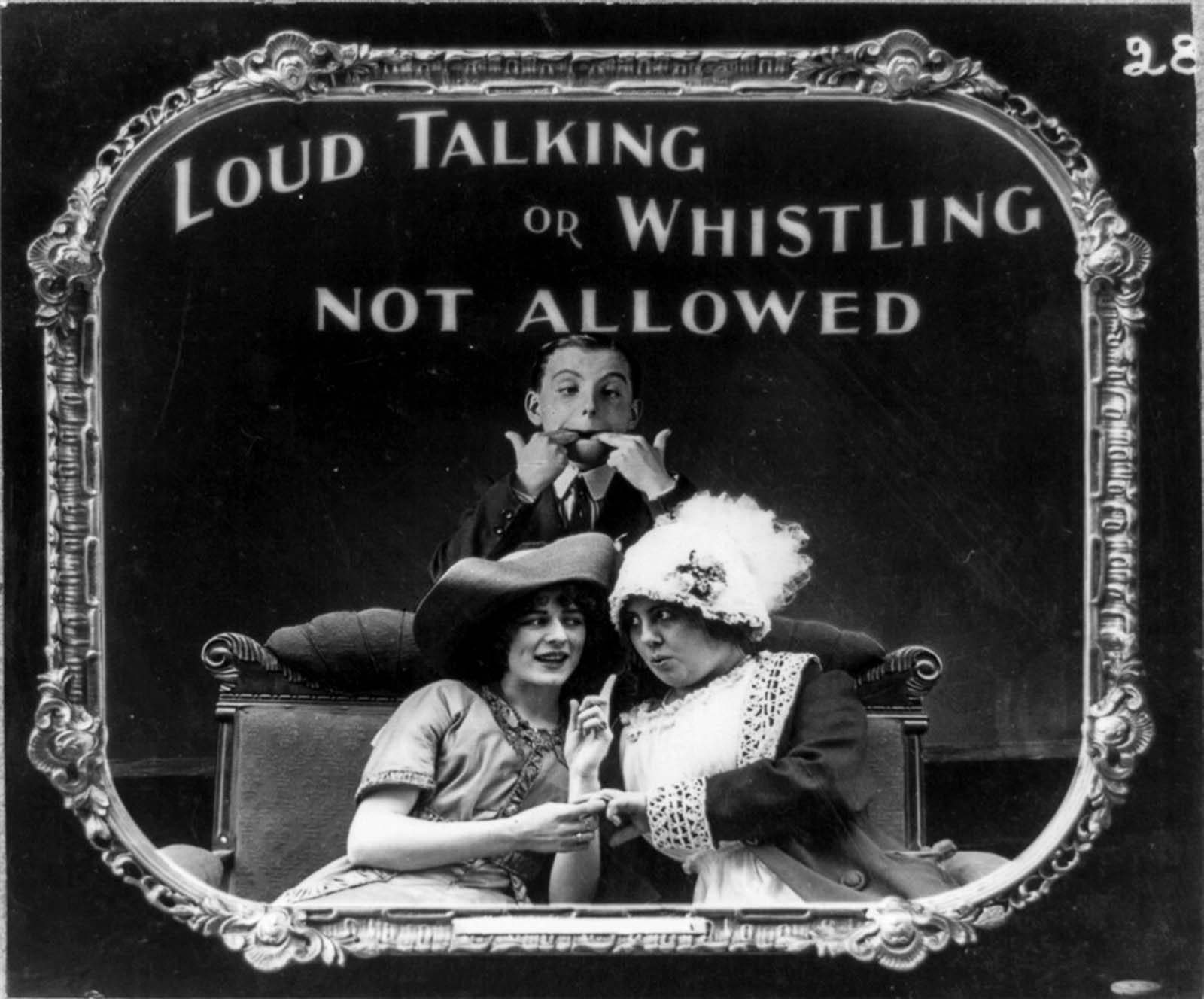 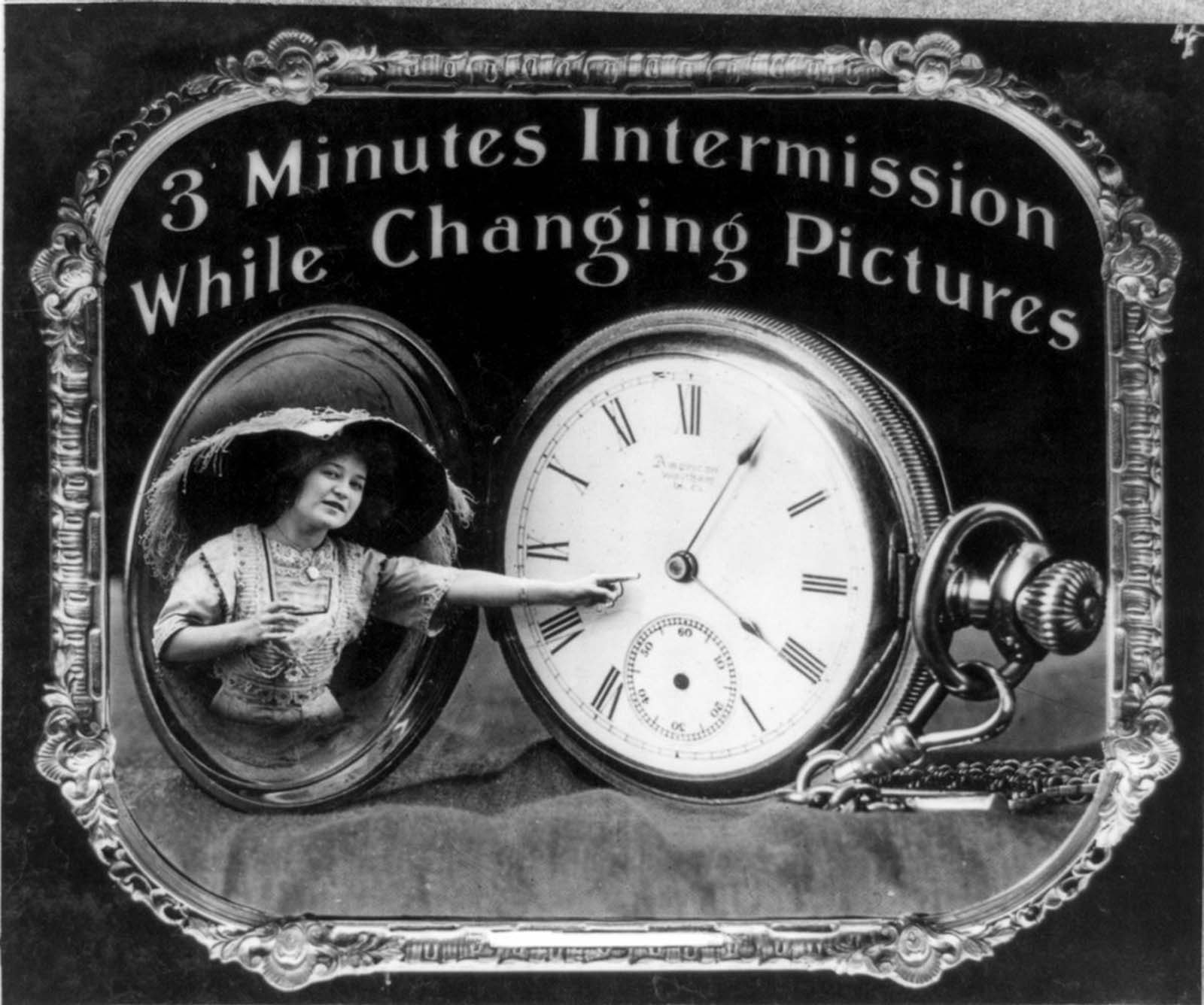 The theaters used various images to inform the audience that there was going to be a short interval while staff members ‘changed pictures’. 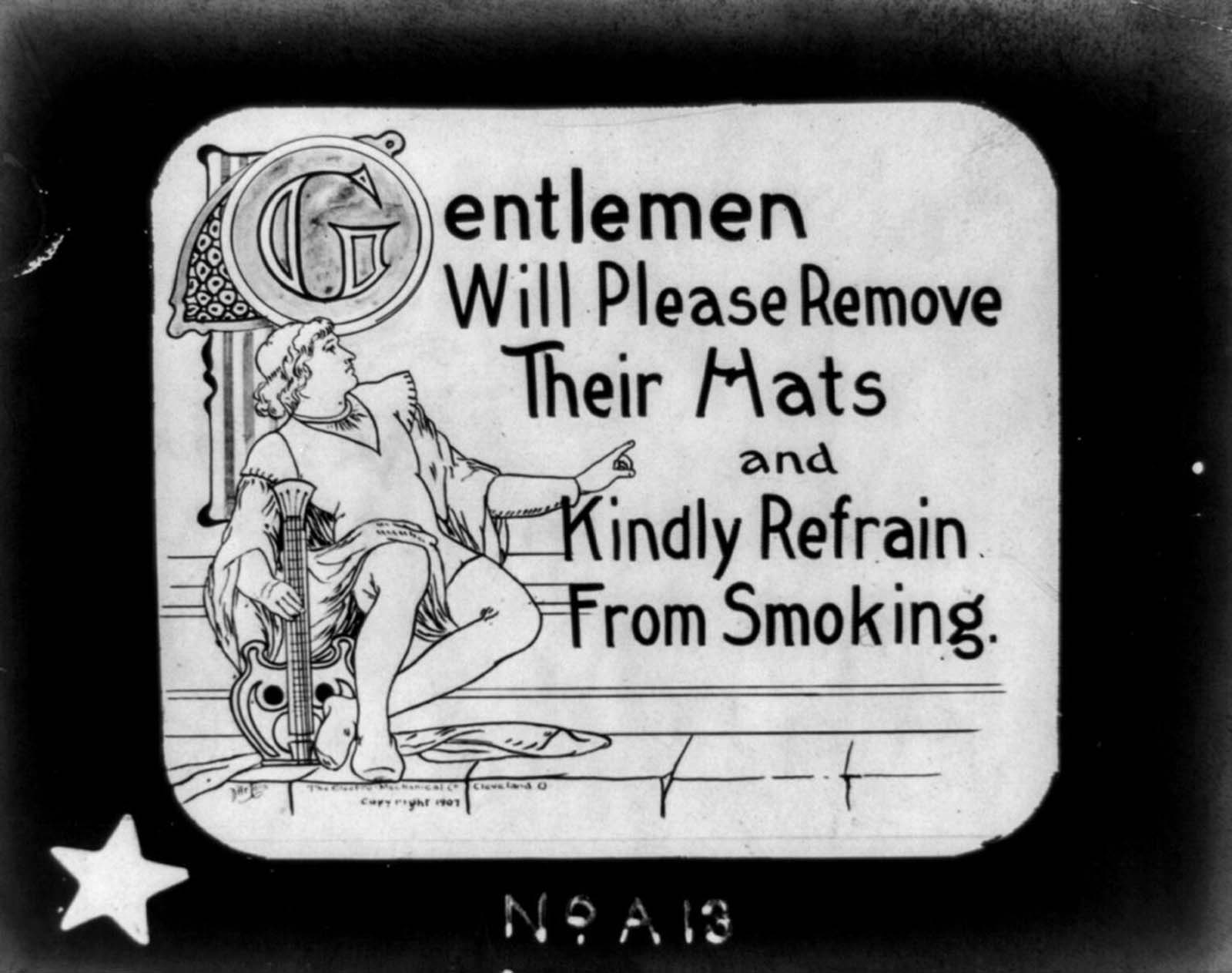 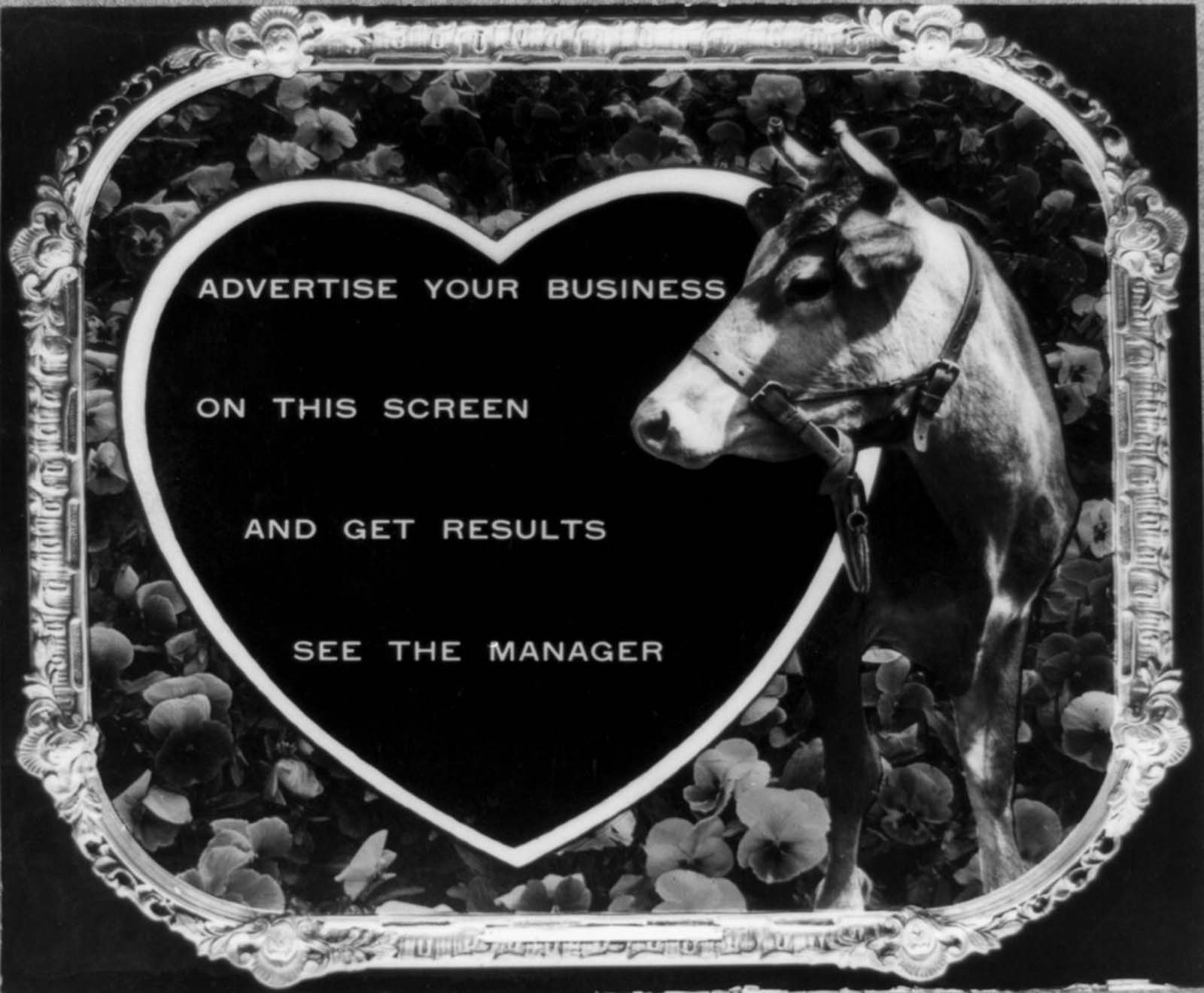 Posters were also used to advertise what the theater could do for local businesses, and encouraged people to ‘see the manager’. 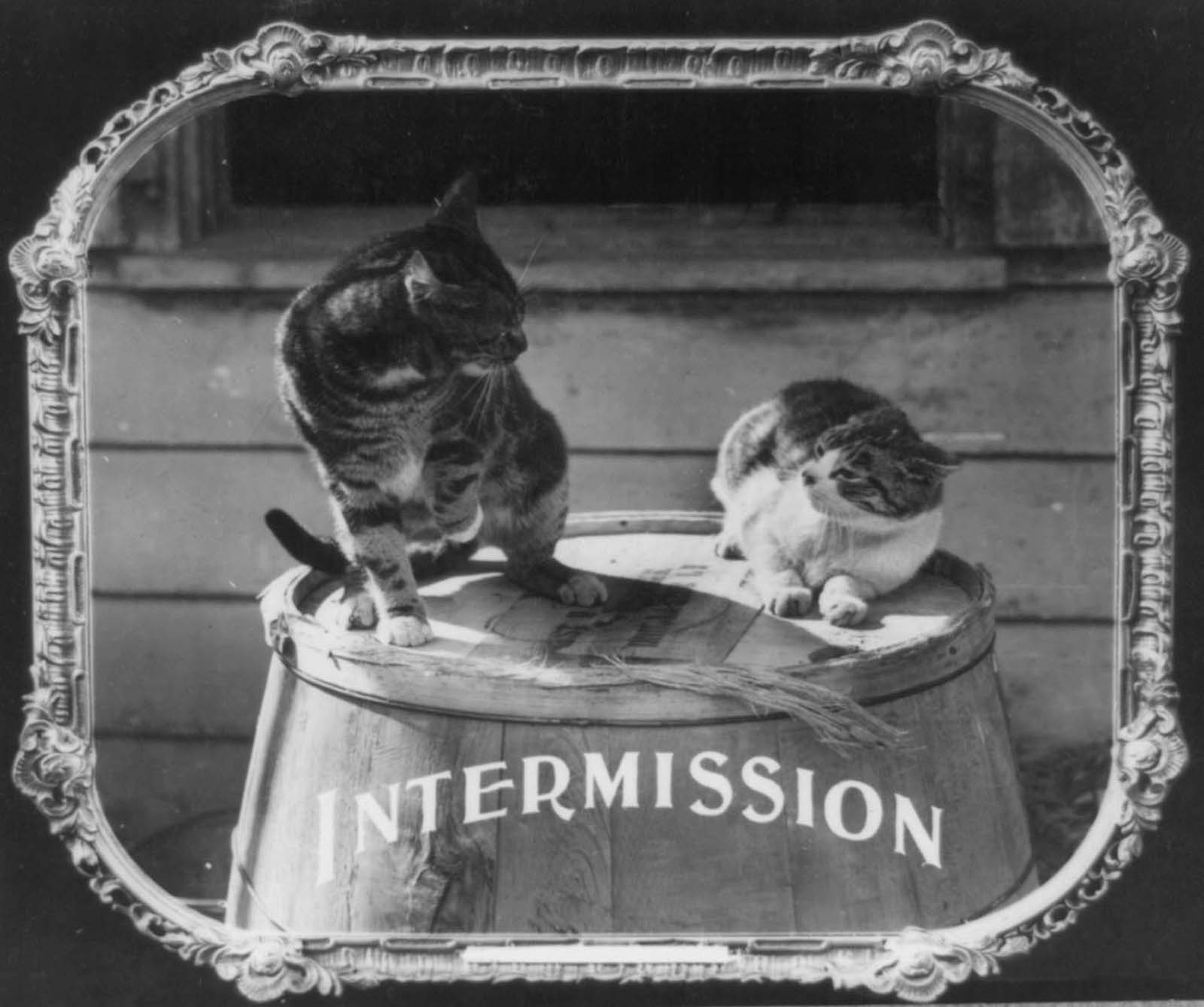 A picture of two cats relaxing on a wooden barrel was used to announce the ‘intermission’. 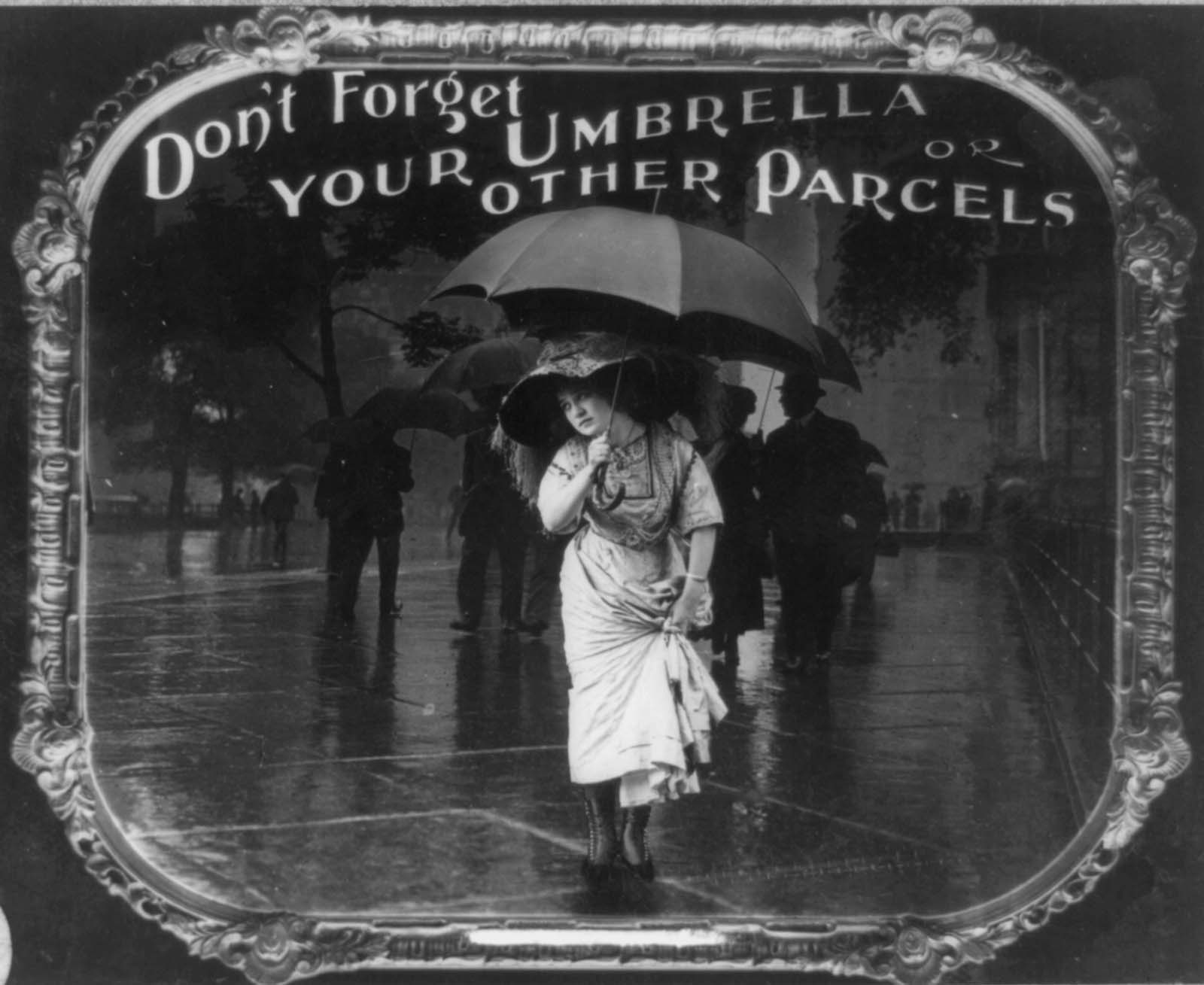 Some of the messages were more informative than others, with this particular card letting people know that they made need an umbrella after the showing. 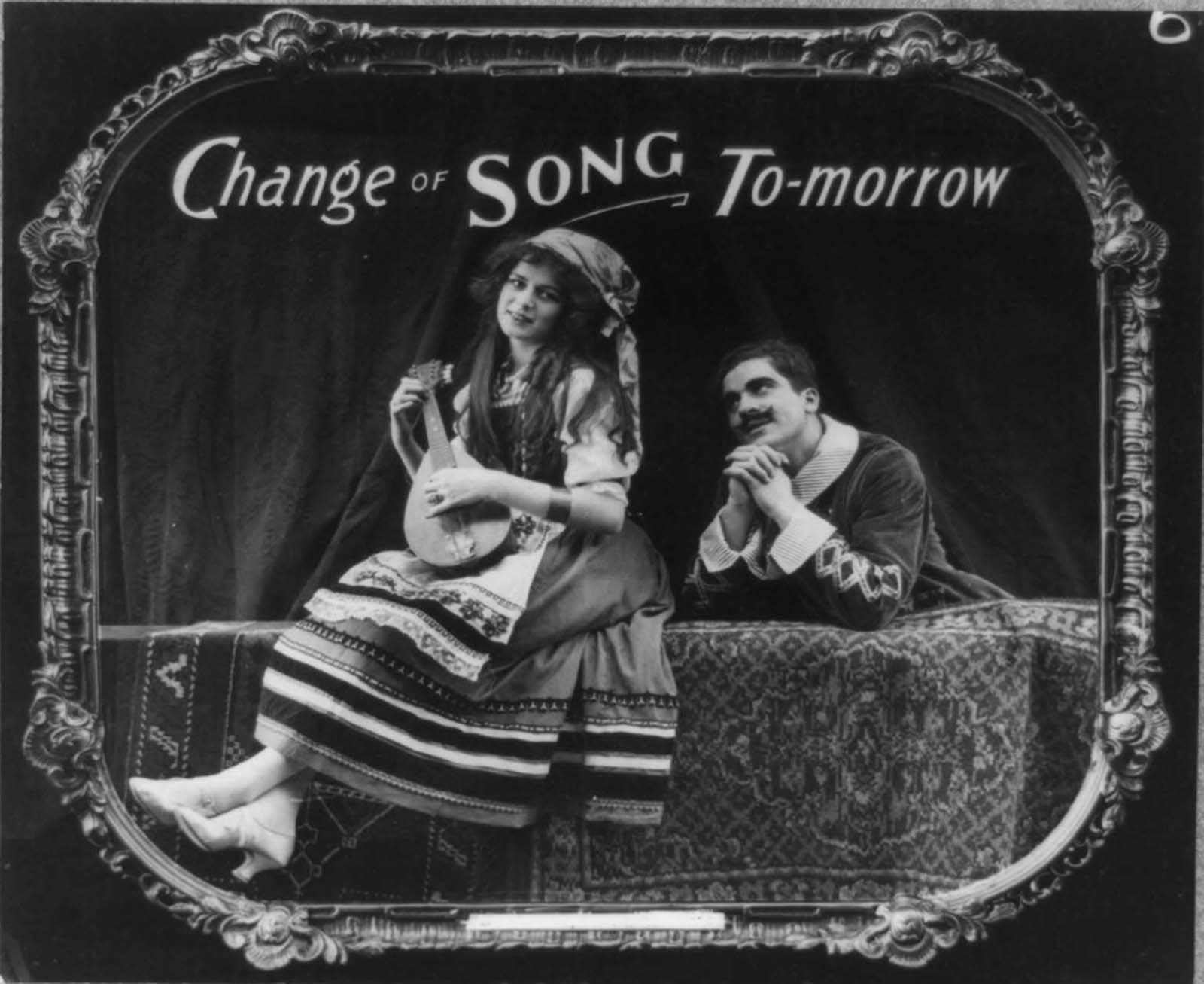 This photograph shows a woman playing a musical instrument while a man admires her. This slider was used at the end of the silent movie and showed a female yawning while holding a candle underneath the message ‘goodnight’.