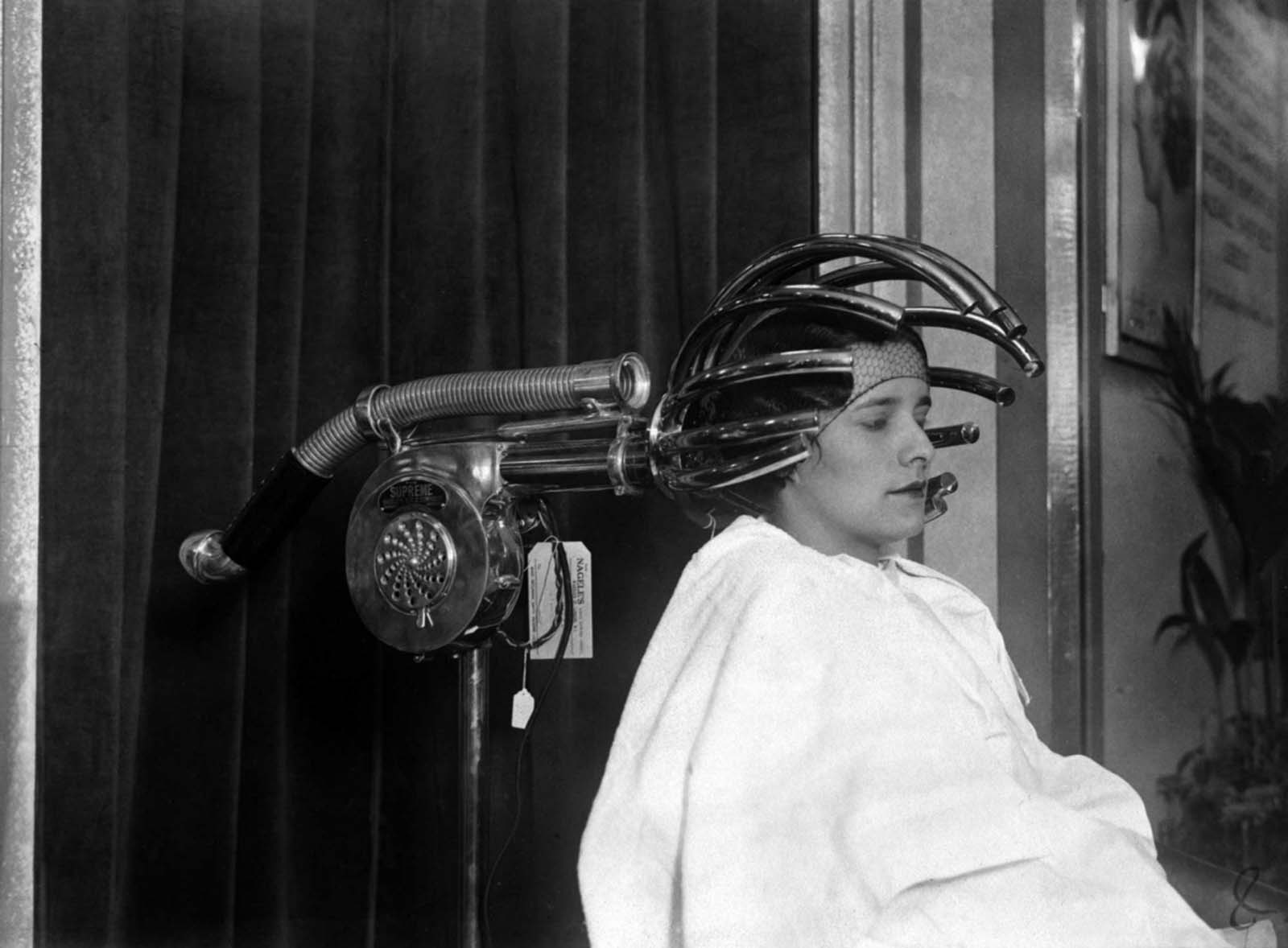 In 1890 the first hairdryer was invented by French stylist Alexander Godefroy.

Blow dryers were invented in the late 19th century. The first model was created by Alexander F. “Beau” Godefroy in his salon in France in 1890. His invention was a large, seated version that consisted of a bonnet that attached to the chimney pipe of a gas stove. Godefoy invented it for use in his hair salon in France, and it was not portable or handheld. It could only be used by having the person sit underneath it.

Around 1915, hair dryers began to go on the market in handheld form. This was due to innovations by National Stamping and Electricworks under the white cross brand, and later U.S. Racine Universal Motor Company and the Hamilton Beach Co., which allowed the dryer to be small enough to be held by hand.

However, the early hand-held dryers were very weighty and created a tepid air-flow. They also had a fatal flaw—literally—in their tendency to electrocute the user. The alternative—other than to use a towel—was to visit a hair-salon and utilize what can only be described as a hair-drying device…or a helmet. Their inception coincided with the peak of post World War I Futurism and Art Deco design—and many such devices could easily have been props in Fritz Lang’s Metropolis, as these pictures demonstrate.

The bonnet dryer was introduced to consumers in 1951. This type worked by having the dryer, usually in a small portable box, connected to a tube that went into a bonnet with holes in it that could be placed on top of a person’s head. This worked by giving an even amount of heat to the whole head at once. The 1950s also saw the introduction of the rigid-hood hair dryer which is the type most frequently seen in salons. It had a hard plastic helmet that wraps around the person’s head. This dryer works similarly to the bonnet dryer of the 1950s but at a much higher wattage. 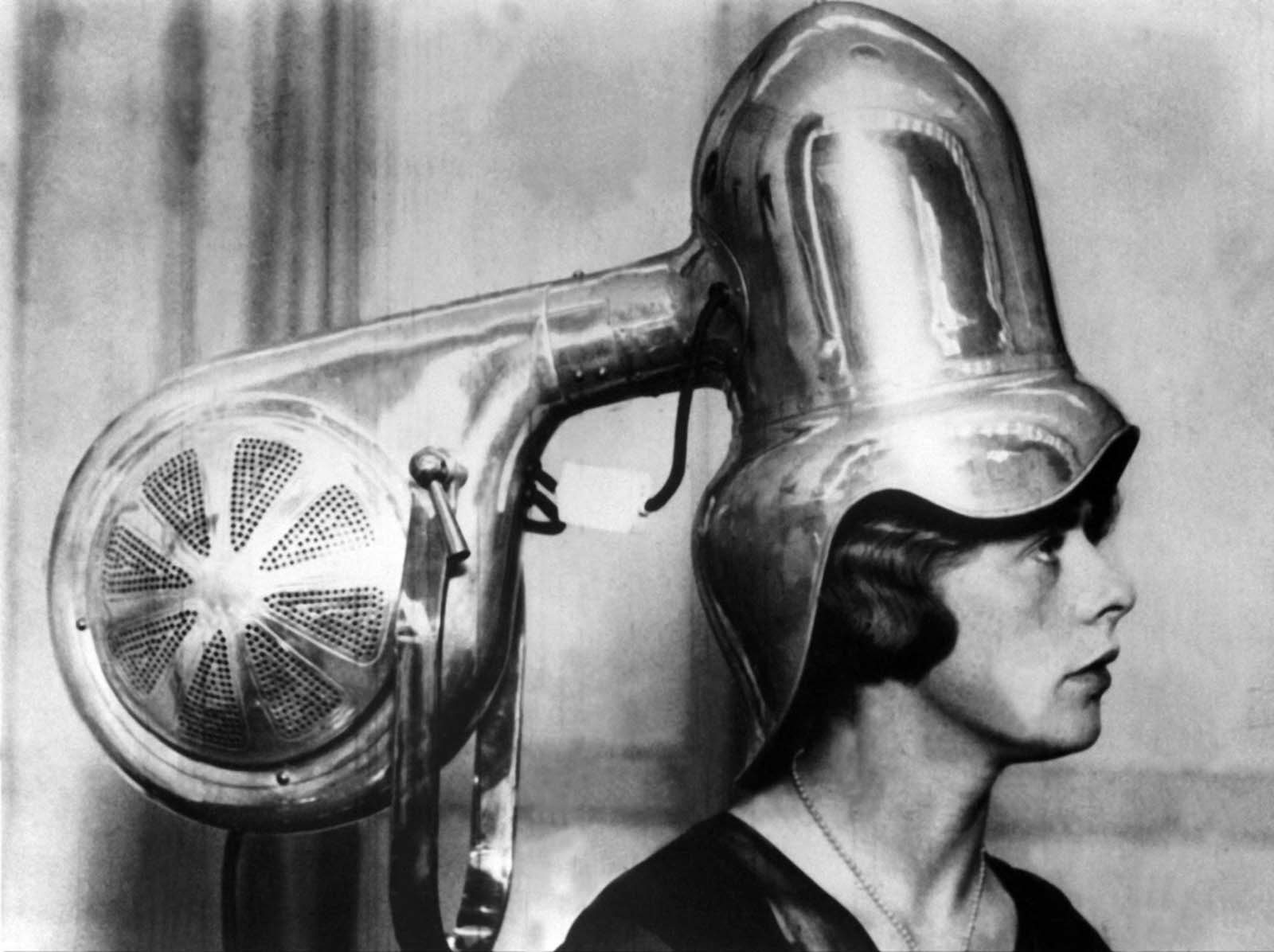 There was a time when washing your hair was seen as a perfectly acceptable excuse to decline an invitation out. It wasn’t so much the washing that was taking up your time, but the drying. 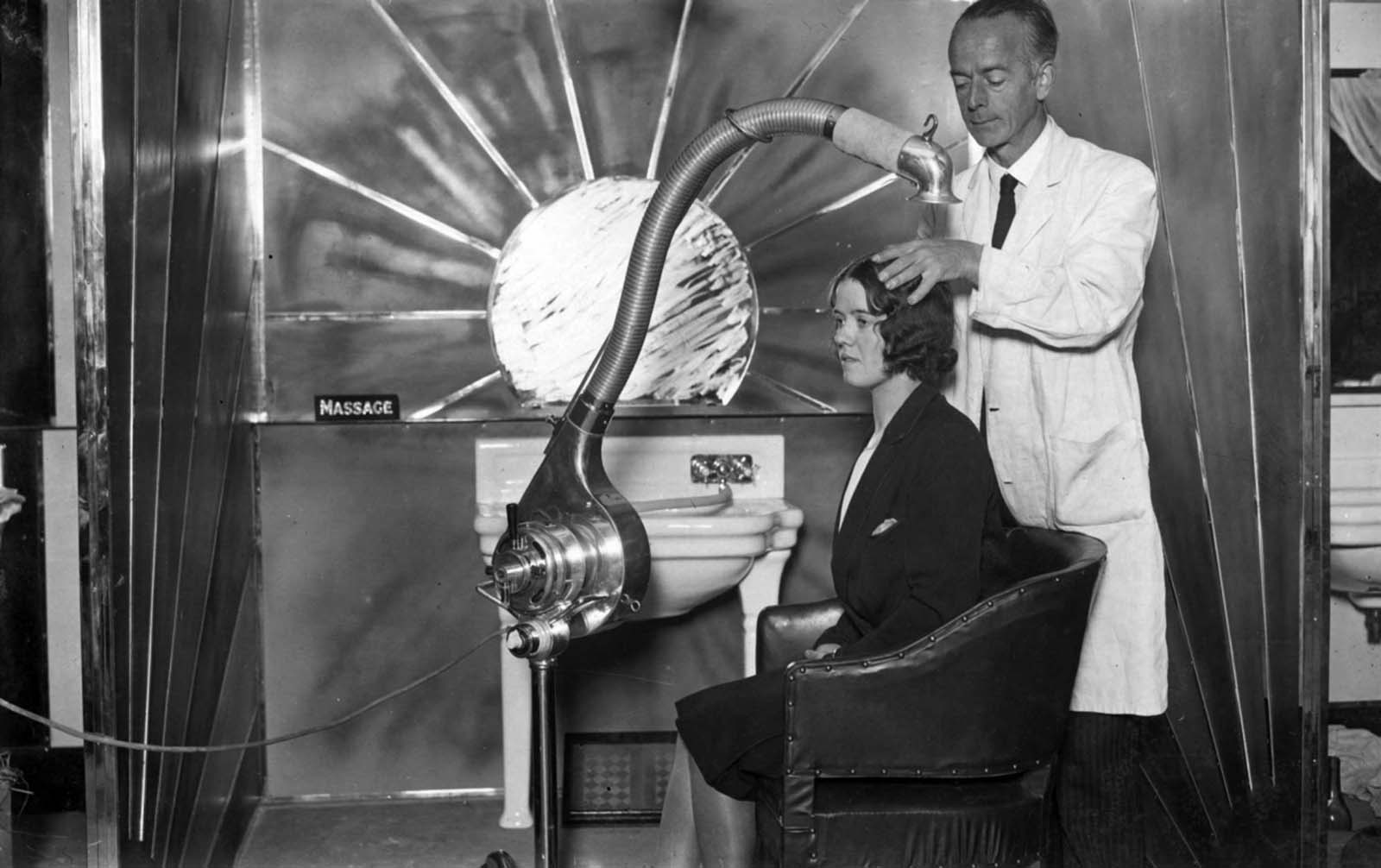 Even in the 1920s, the new dryers were often heavy, weighing in at approximately 2 pounds (0.9 kg), and were difficult to use. 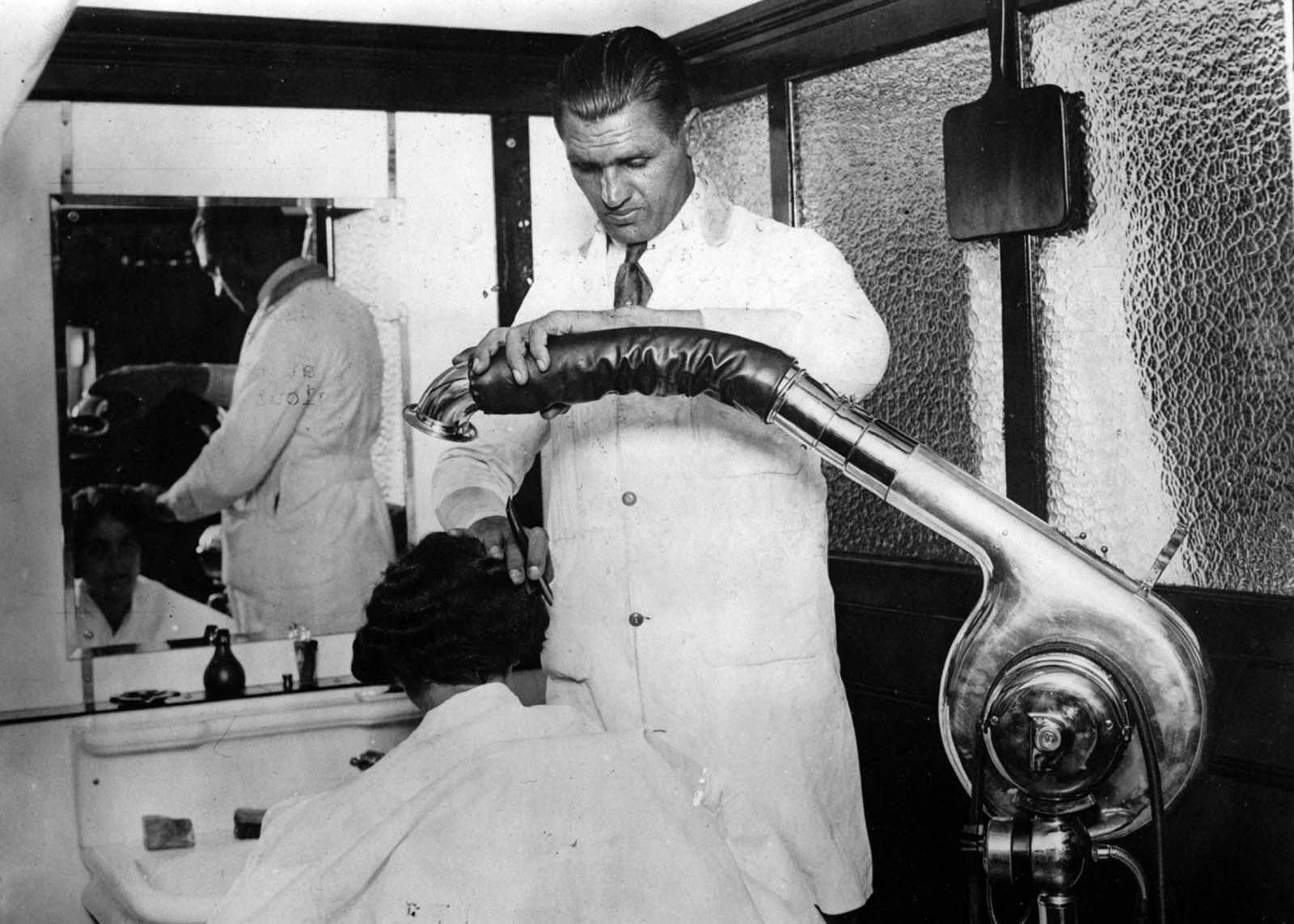 They also had many instances of overheating and electrocution. 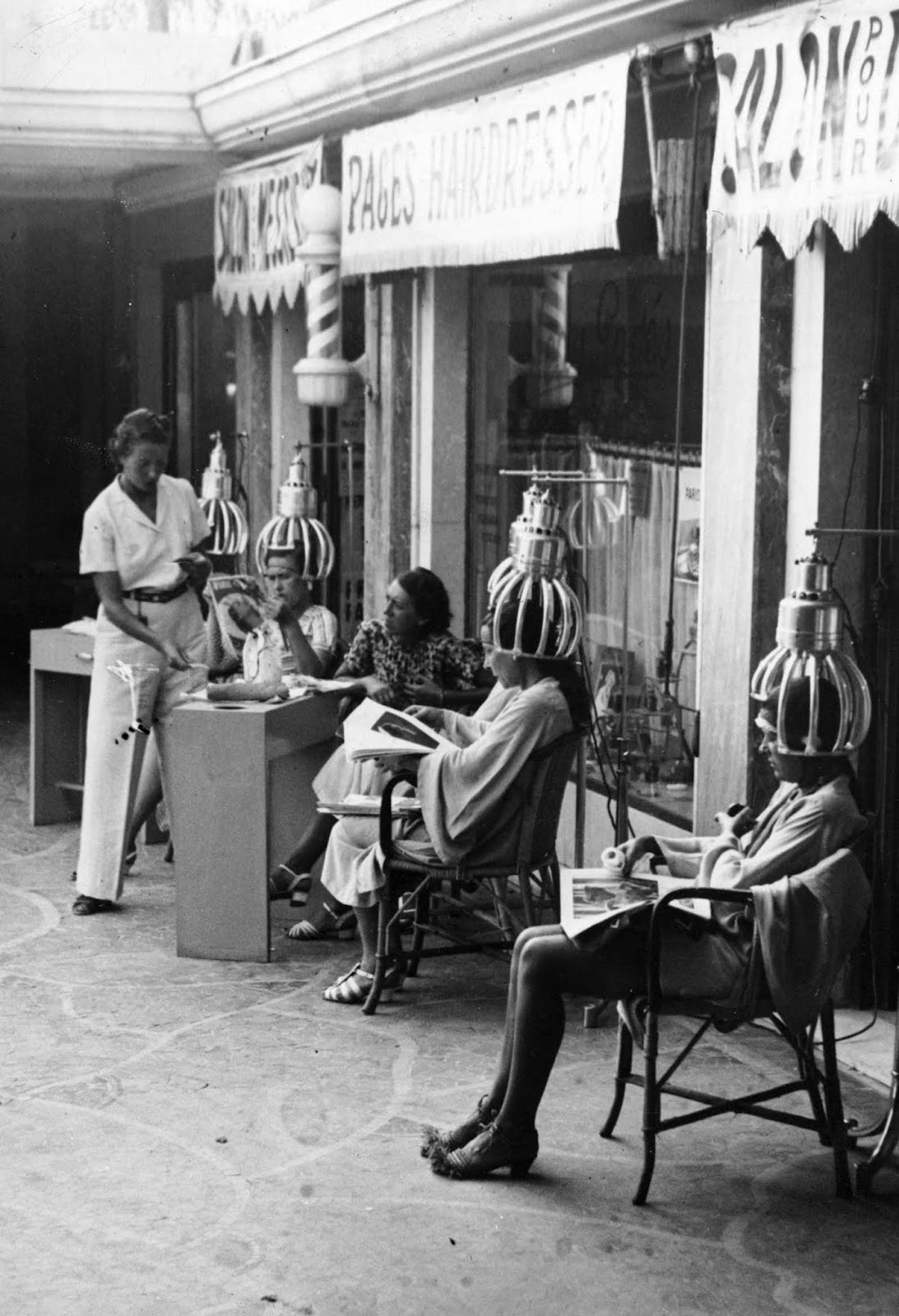 Hair dryers were only capable of using 100 watts, which increased the amount of time needed to dry hair (the average dryer today can use up to 2000 watts of heat). 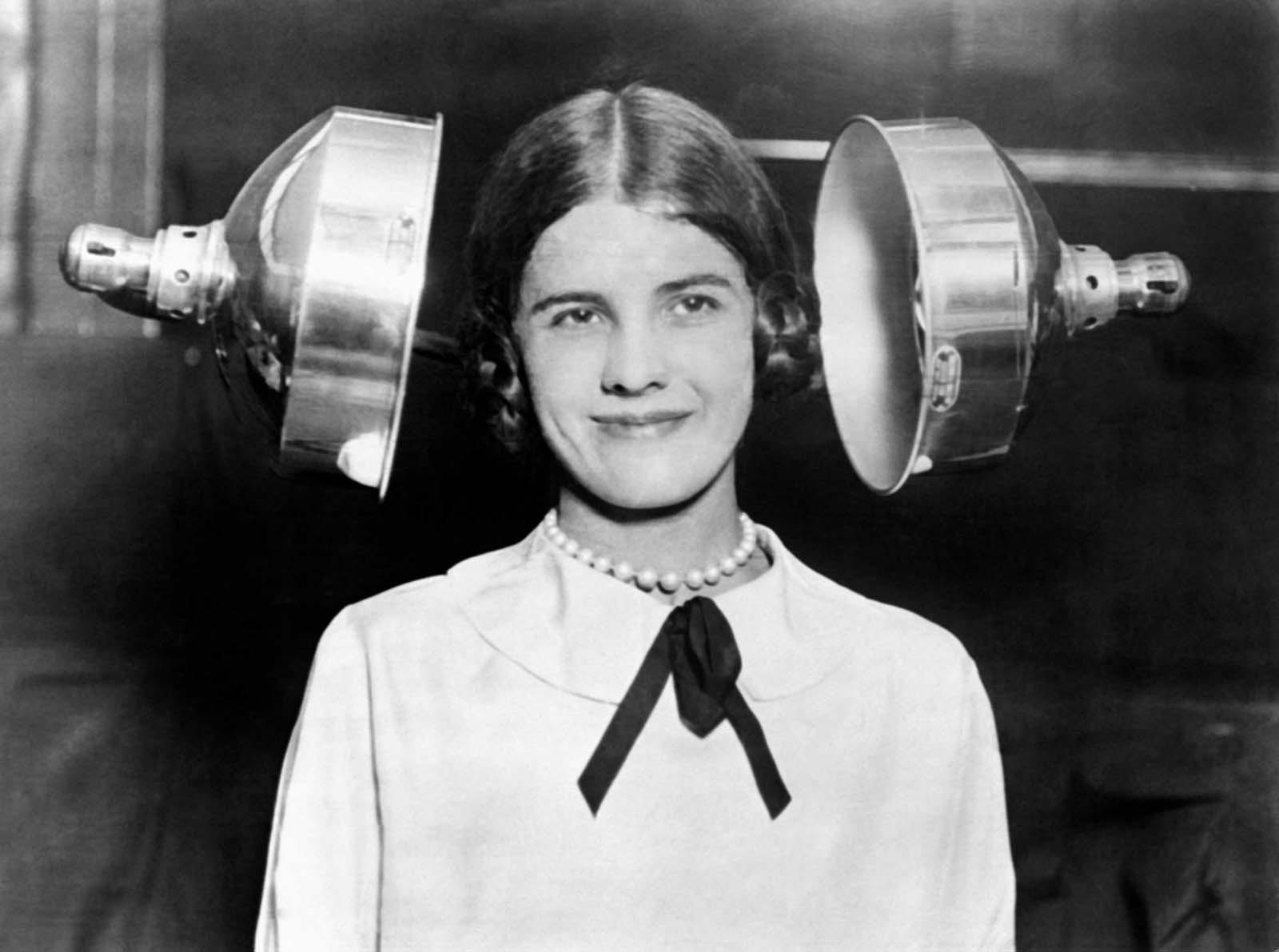 New hair dryers have been invented lately to simplify women’s lives, circa 1930. 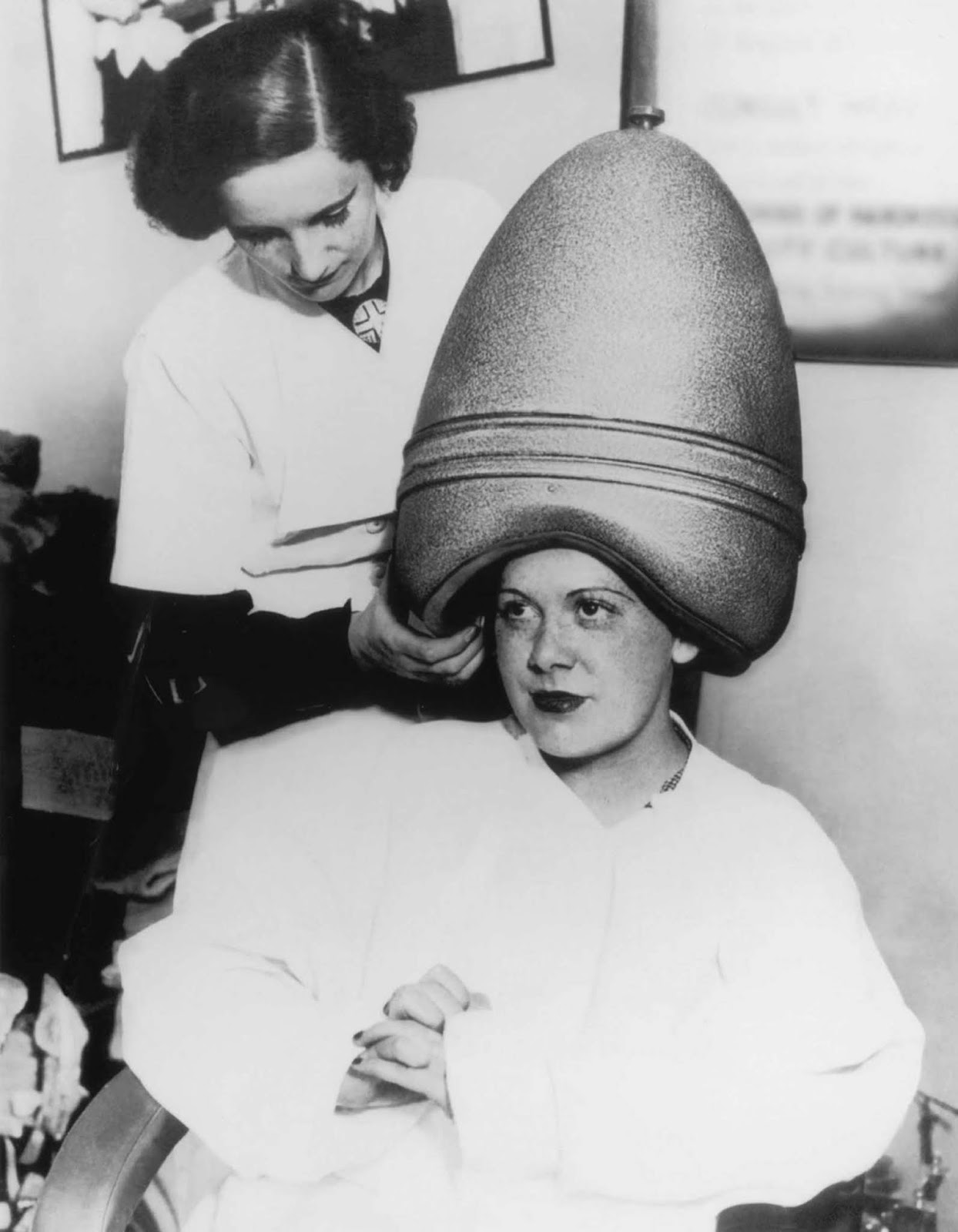 Since the 1920s, development of the hair dryer has mainly focused on improving the wattage and superficial exterior and material changes.

One of the more important changes for the hair dryer is to be made of plastic, so that it is more lightweight. This really caught on in the 1960s with the introduction of better electrical motors and the improvement of plastics.