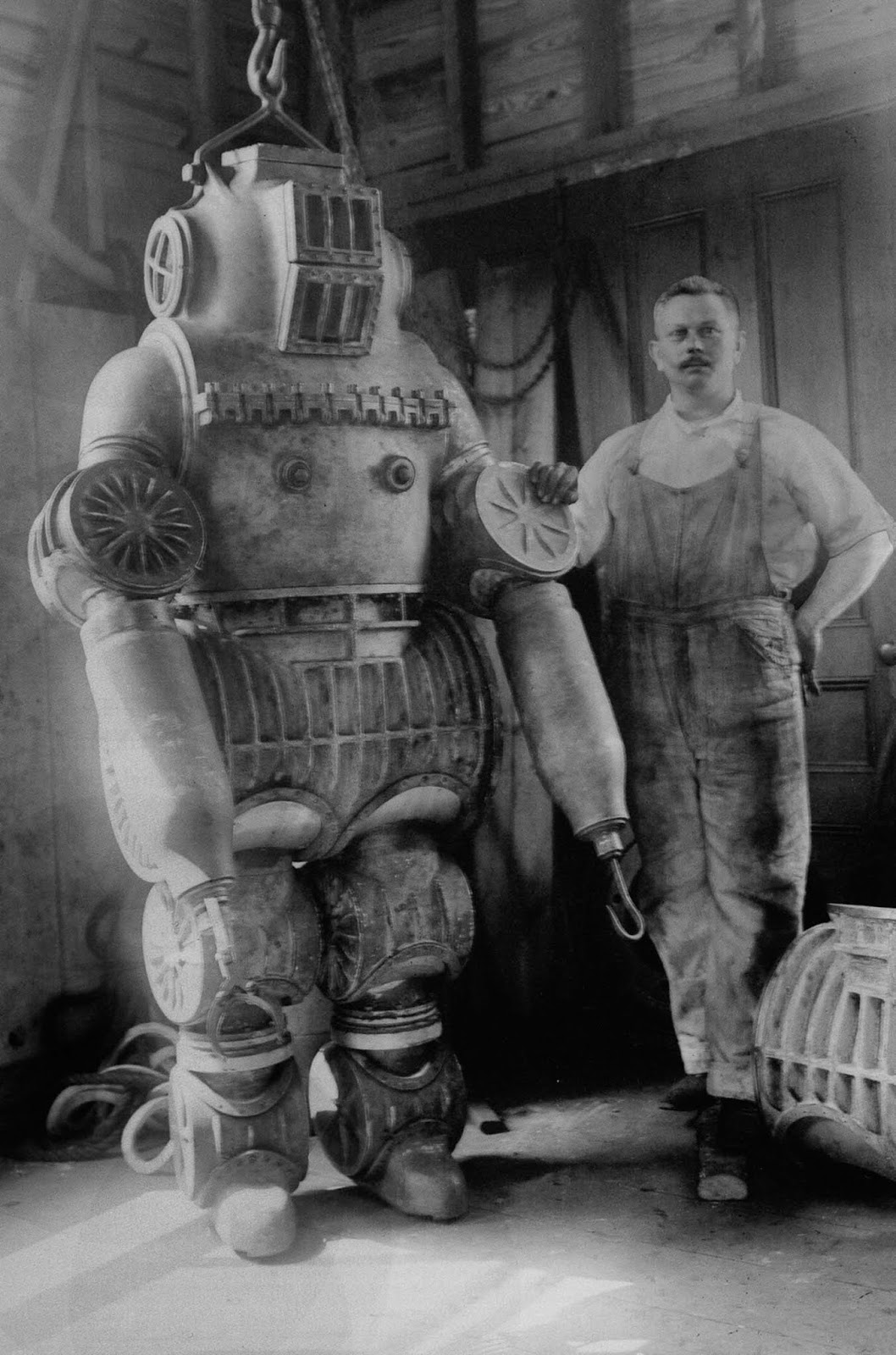 In 1914, Chester MacDuffee constructed the first suit with ball bearings, as the medium to provide movement to a joint. The suit was tested in New York in 214 feet of water. 1914.

The invention of individual diving suits in the early 18th century allowed a more refined exploration of the ocean depths. The initial drive for the creation of diving suits was to aid salvage missions, at a time when many ships (carrying many treasures) were lost to the ocean on perilous journeys.

The first diving suits were designed in the 1710s and in 1715, English inventor John Lethbridge created the first fully-enclosed suit, consisting of watertight sleeves, a pressurized air-filled barrel and a viewing hole.

In 1797 in Poland, Karl Heinrich Klingert was the first to develop a full-body diving suit made of a metal helmet, wide metal girdle, and pants, and a vest made of waterproofed leather. With the use of a pump turret, air could be supplied to the diver via a long, weighted tube.

The next greatest leap in diving technology came in 1837 with the advent of “heavy footers” – diving suits made to encase the diver in thick waterproof leather, a heavy metal helmet, and weighted boots. The diving helmets developed for this were used for over a century. The diving helmet suit made it possible for divers to move underwater more freely.

In 1878, Alphonse and Theodore Carmagnolle in Marseille, France, developed an armored suit with twenty small portholes and articulated limbs, which they were granted a patent for. It weighed 838 pounds. 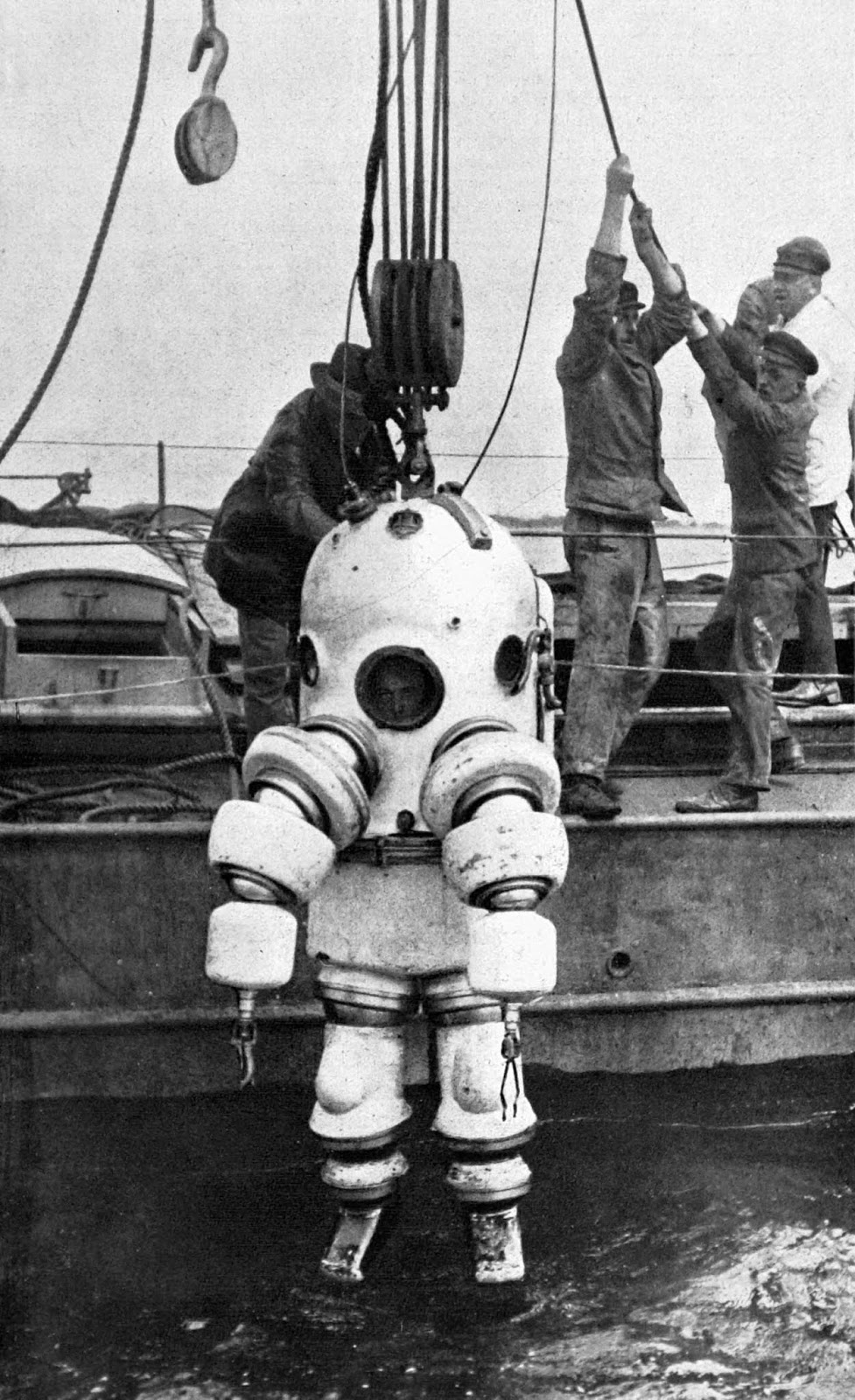 A P-7 Neufeldt and Kuhnk metal diving suit is tested in France. 1926.

This was the first human-shaped atmospheric diving suit (ADS) – meaning that the pressure inside the suit was one atmosphere – the same as at the surface – and therefore the diver wouldn’t have to worry about the dangers of decompression.

Sadly, the suit never worked properly and the joints were never completely waterproof. The original suit is now on display at the French National Navy Museum in Paris.

The same year, Henry Fleuss of London became the very first scuba diver with his invention of the first self-contained underwater breathing apparatus (SCUBA) using compressed oxygen. He was granted a patent in 1878, and it eliminated the need for a diver to rely on surface-supplied air.

A rubber mask was connected to a rubber airbag, copper oxygen tank, and a scrubber for removing CO2 so that exhaled air could be re-breathed.

This device was originally developed to save trapped miners, but immediately was recognized for its potential underwater. While it did limit the divers working depth due to the danger of oxygen toxicity, this was a revolutionary design.

The British Navy was the first to train and recruit divers for their purposes, and the US Navy followed suit in a training program in 1882.

However, there was little official interest in this new technology and it wasn’t until 1898 that USS Maine sank that US divers could prove their use and value. It was then that they were able to recover the ships’ cipher code, keeping it from falling into the hands of the enemy. 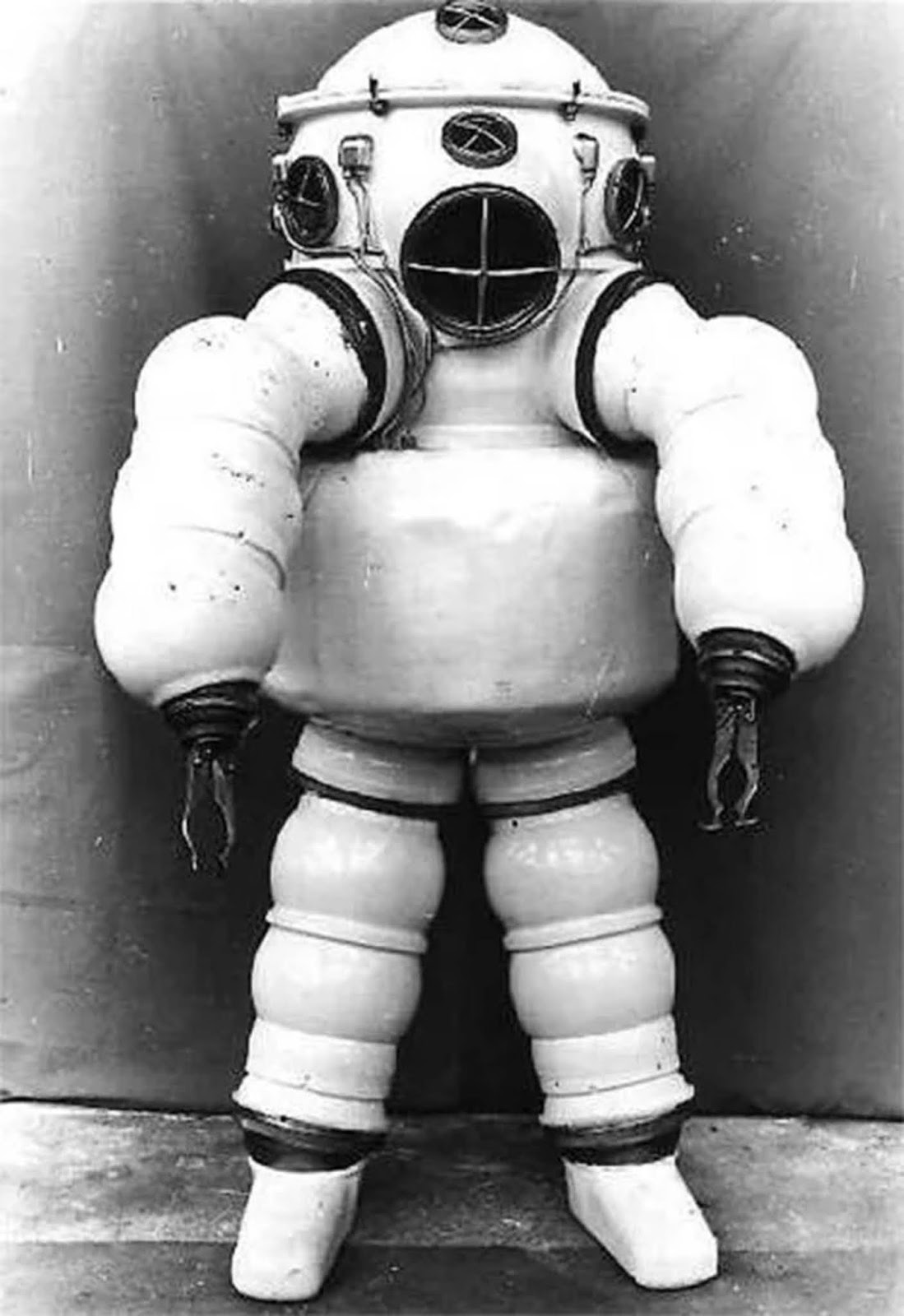 Neufeldt-Kuhnke suit. This third generation shell (produced between 1929-1940) with a closed circuit breathing system was safe up to a depth of 525 feet (160 m), and had a telephone. 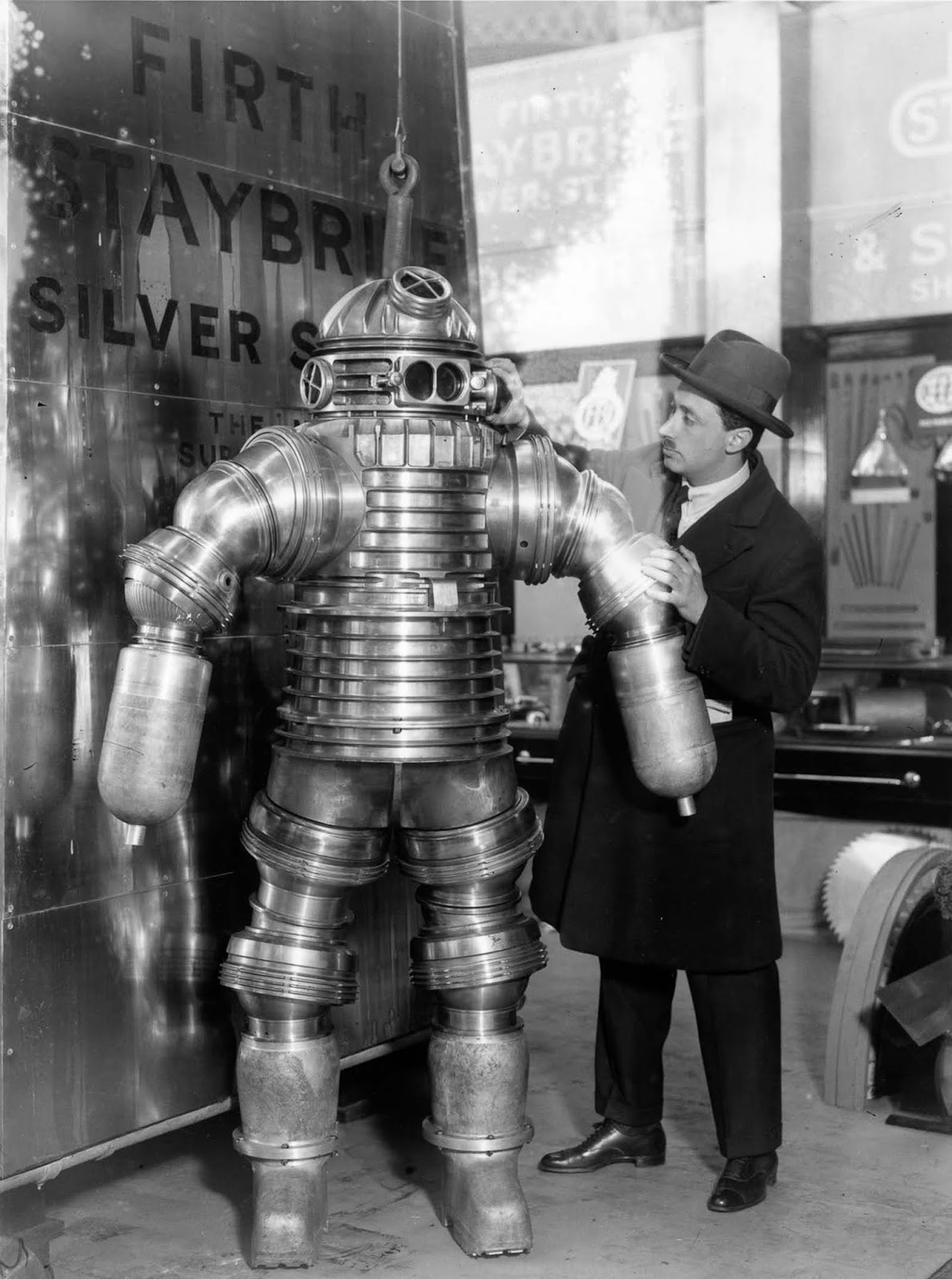 Inventor J. S. Peress explains the workings of his new rustless diving suit, made of Staybrite Silver Steel, at the Olympia Shipping Exhibition in London. The suit weighs 550 pounds and can work at a depth of 650 feet. 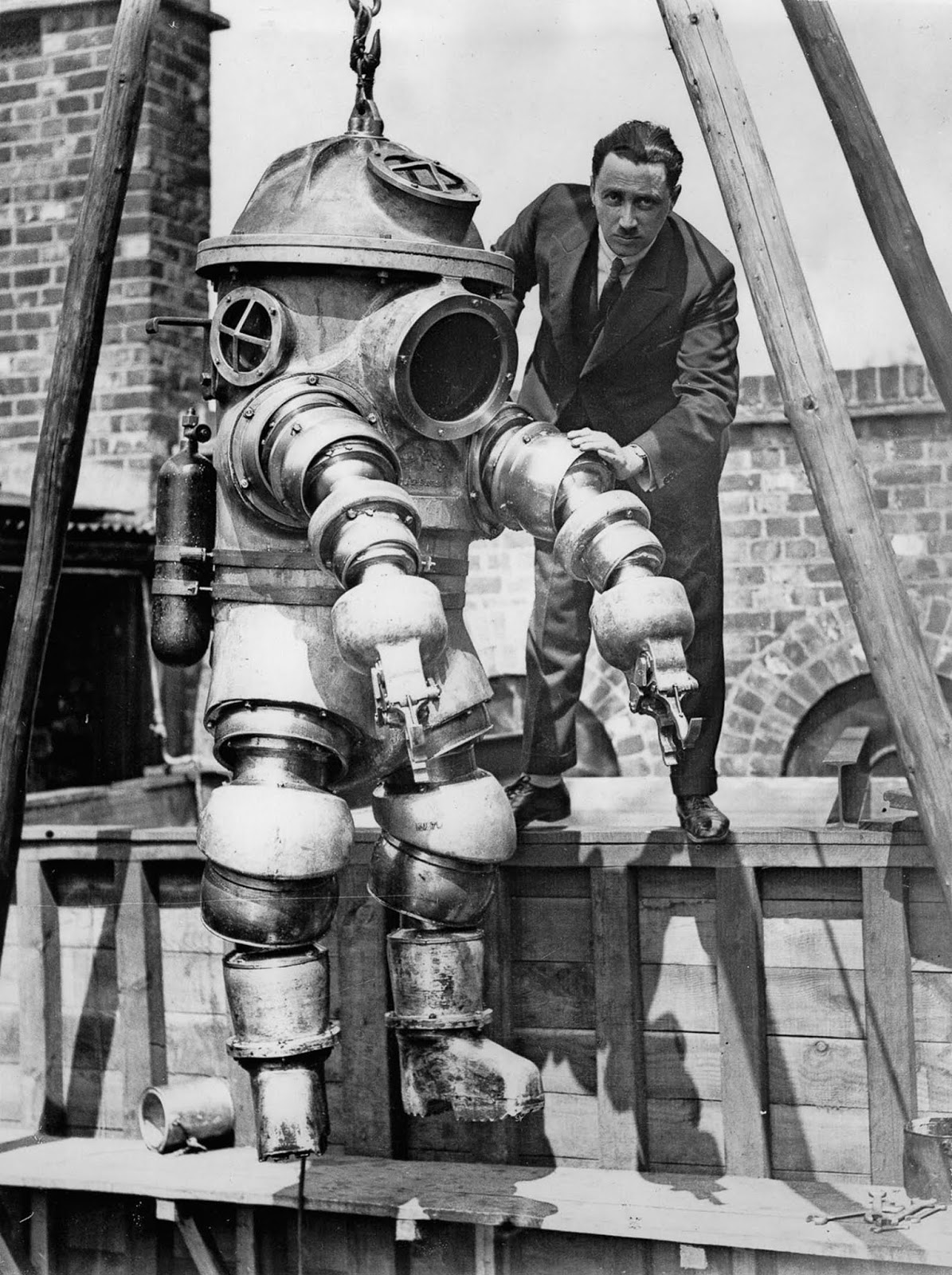 J.S. Peress, the inventor of a new armored diving suit, gets his device ready for tests in a tank at Weybridge, United Kingdom. 1930. 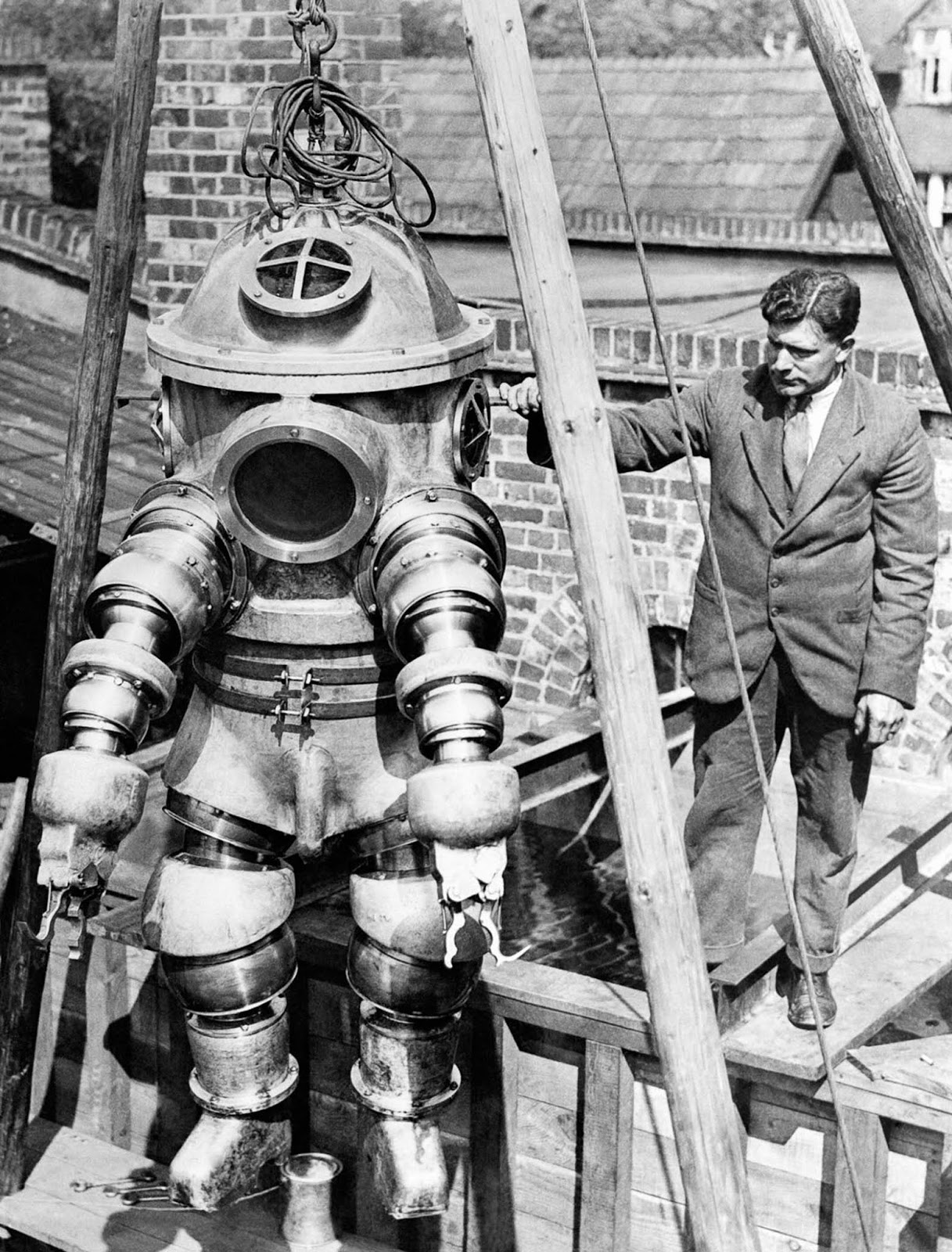 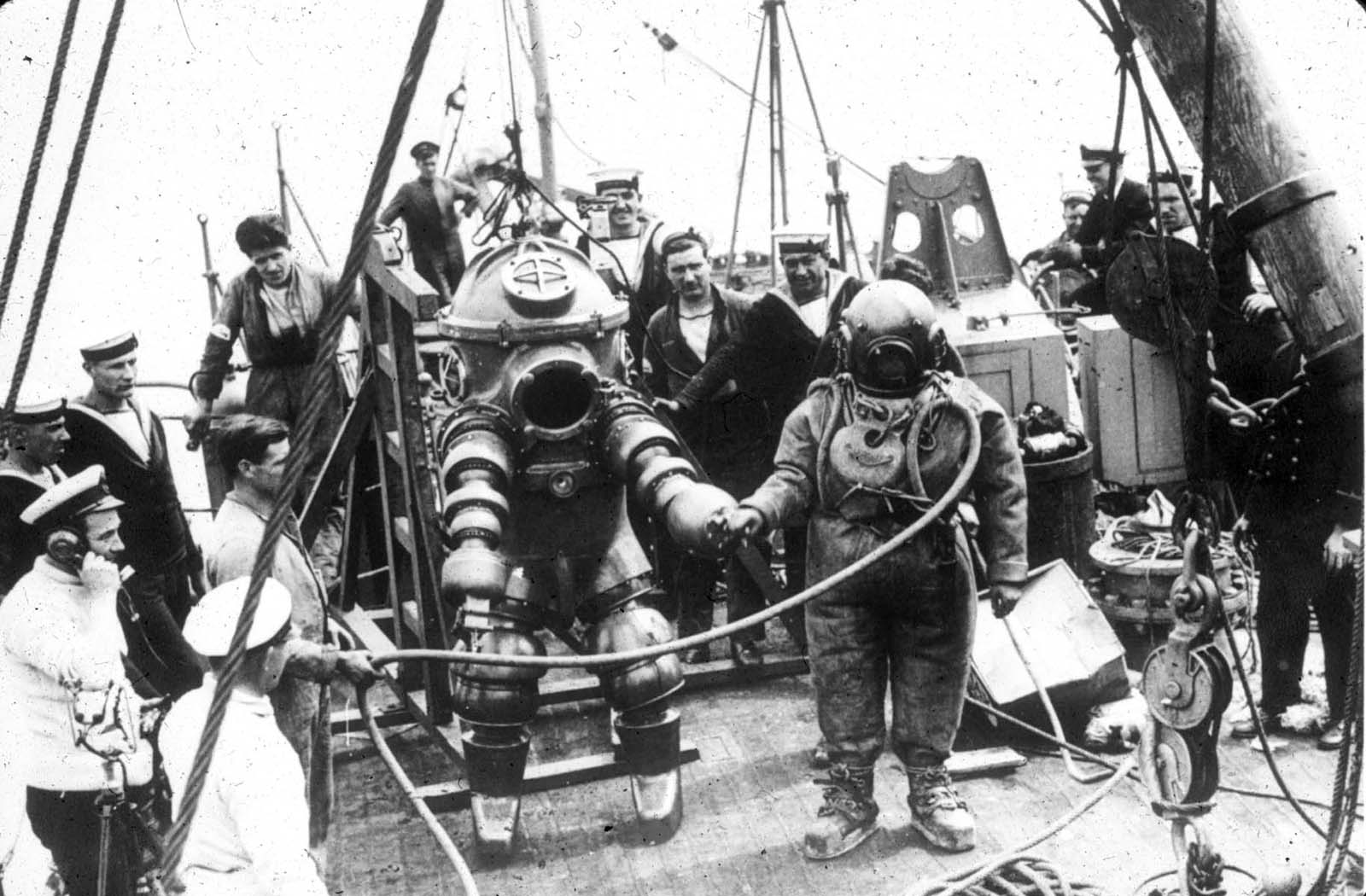 Two divers, one wearing the Tritonia ADS and the other standard diving dress, preparing to explore the wreck of the RMS Lusitania, 1935. 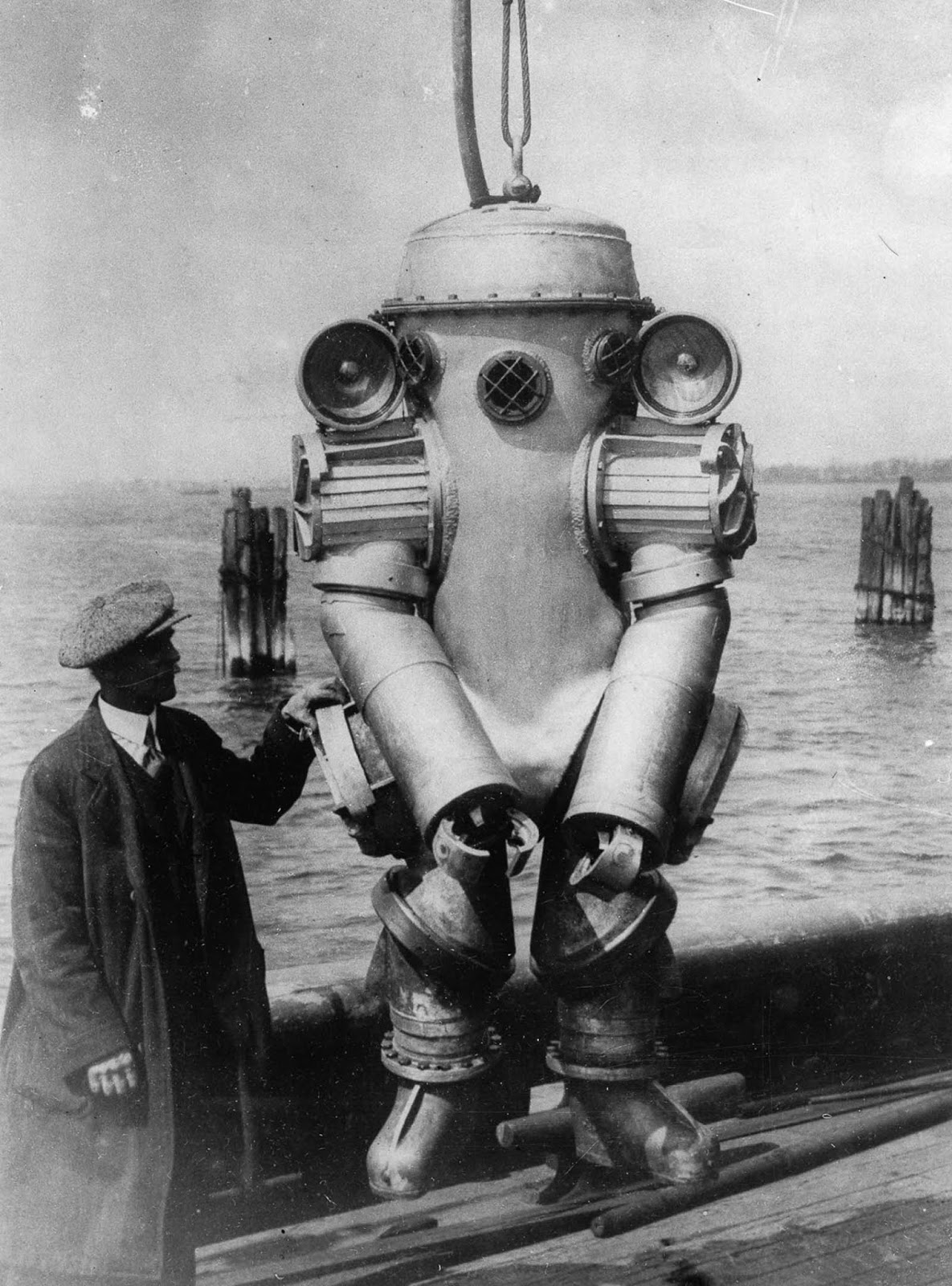 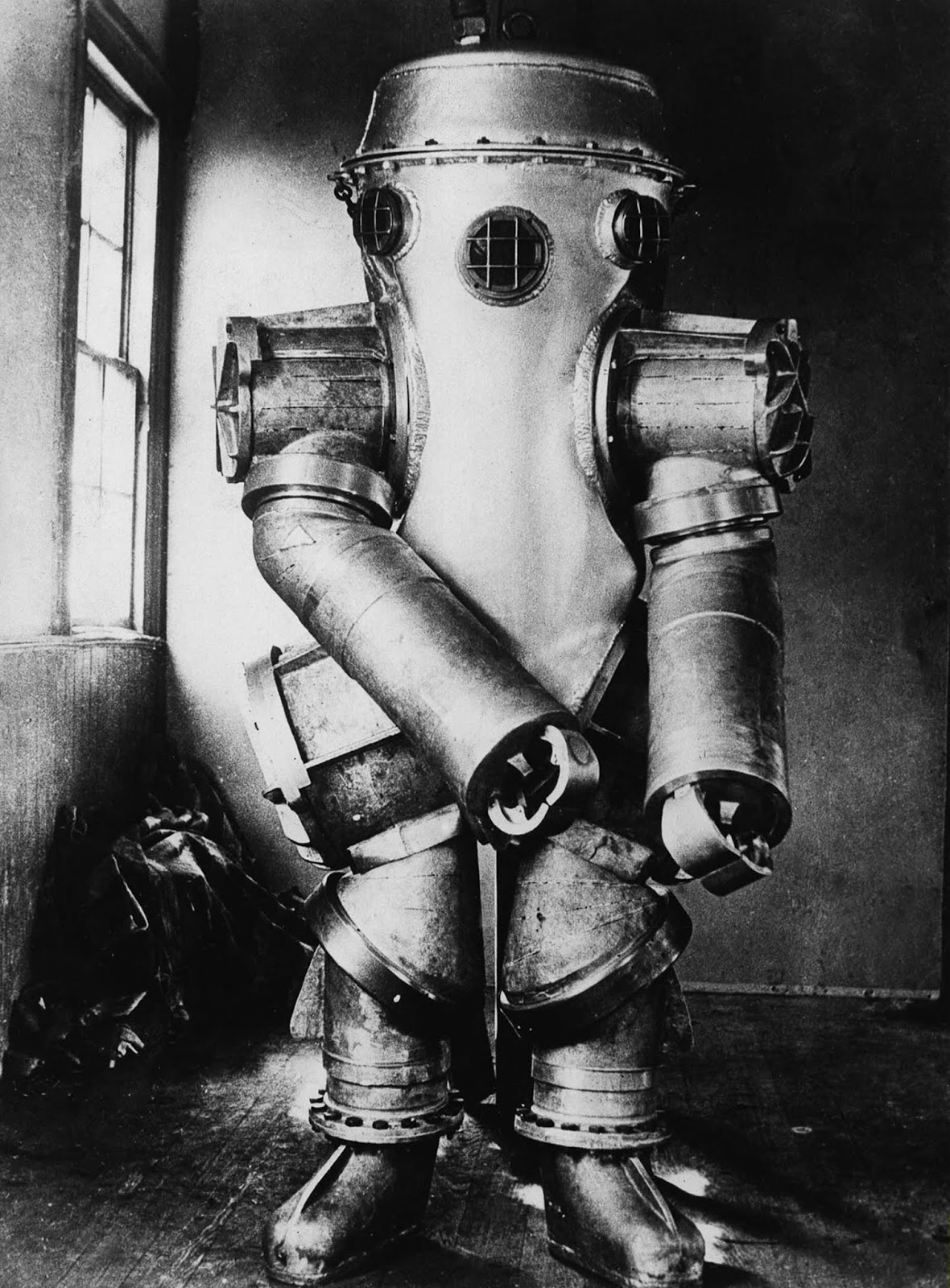 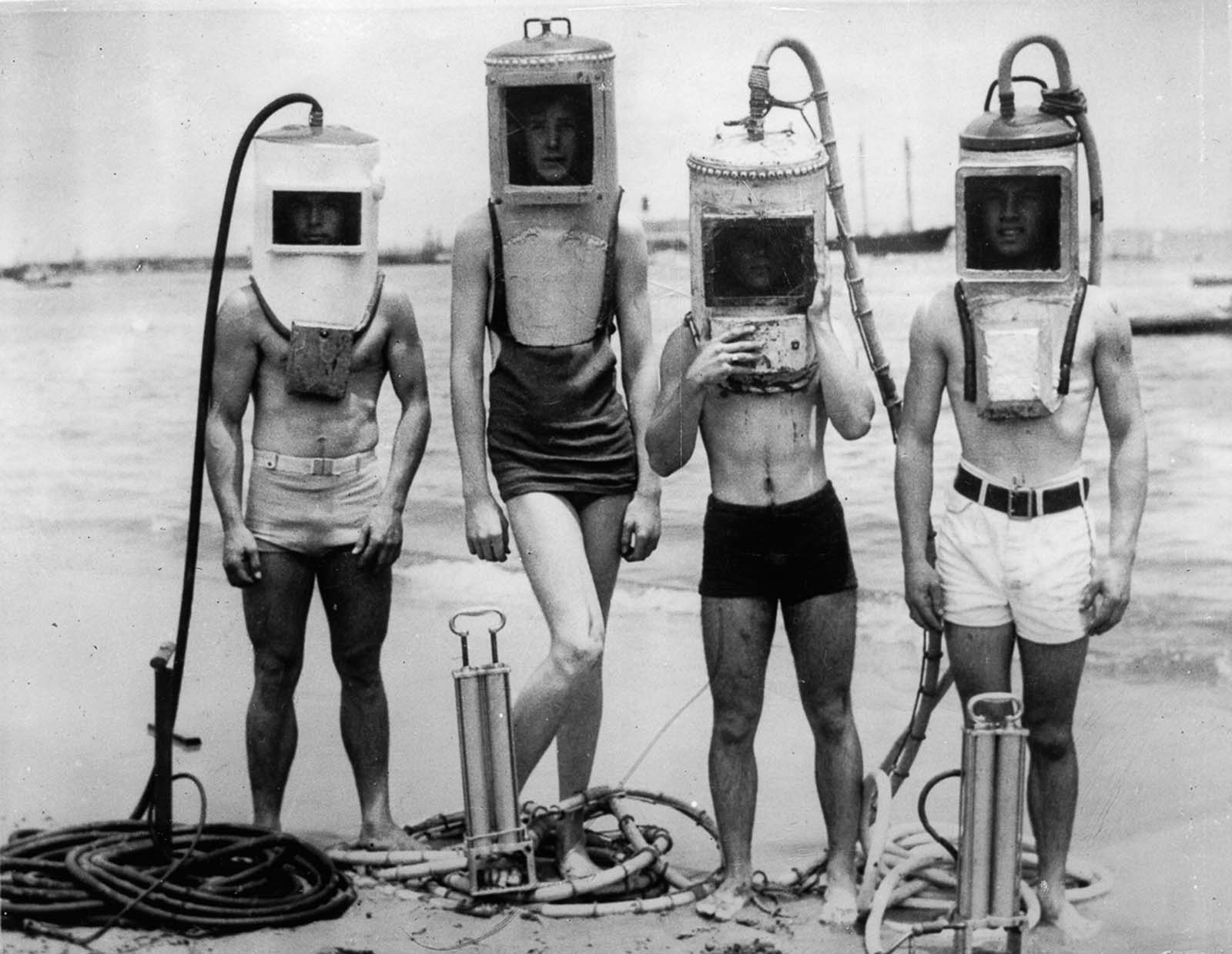 A group of Los Angeles boys show off diving helmets made from sections of hot water heaters, boilers and other easily secured junk. 1933. 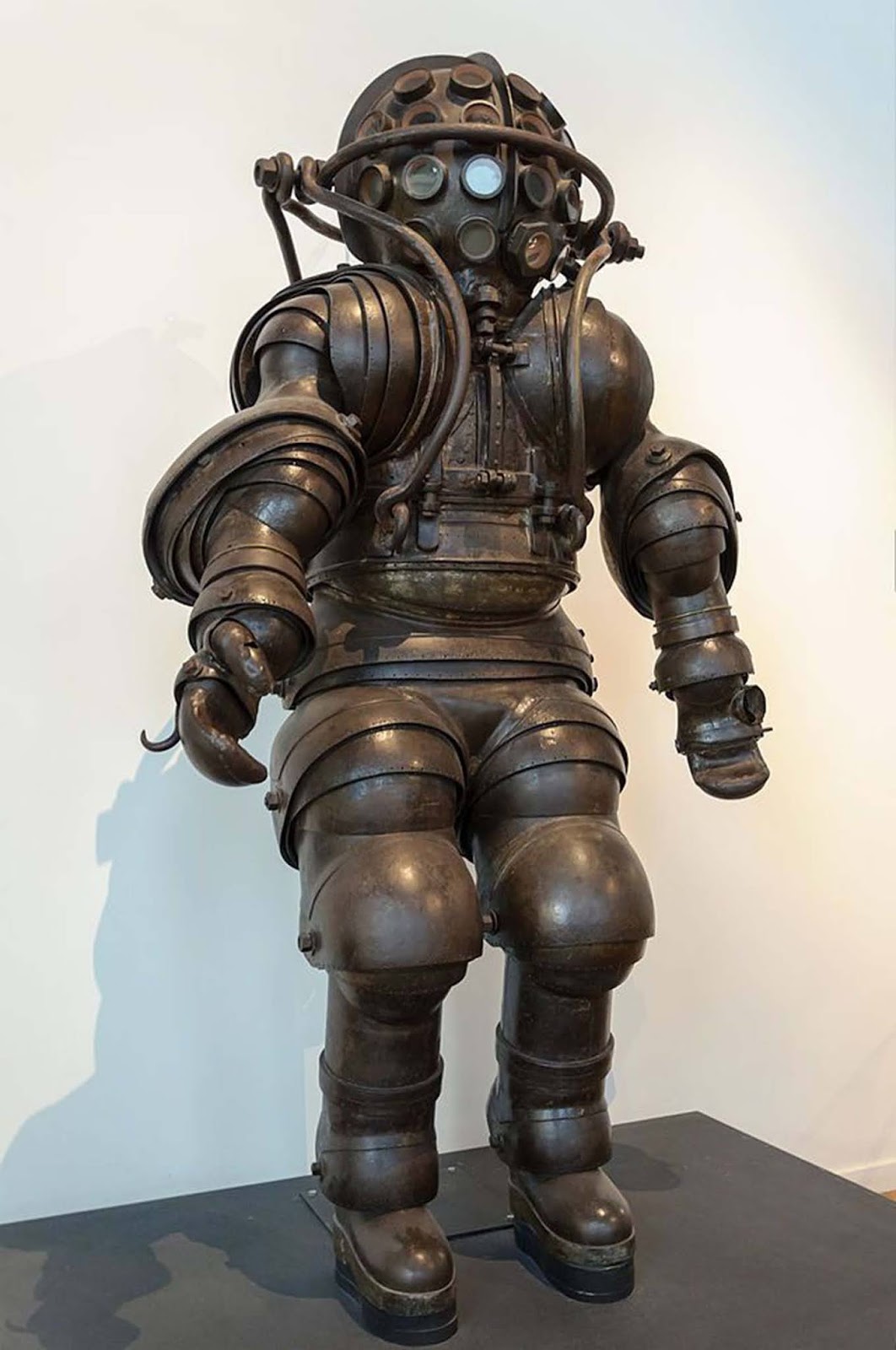 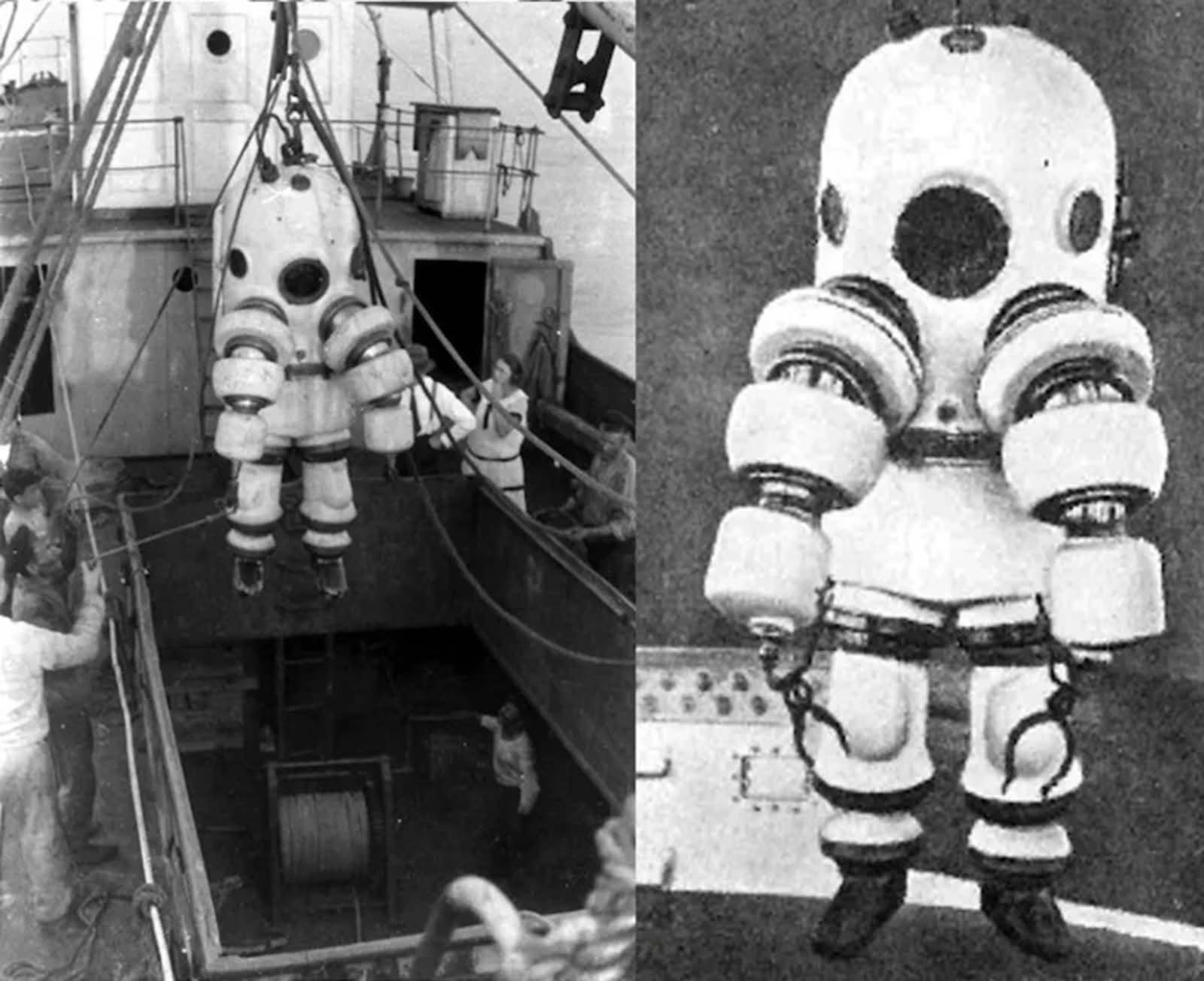