Before video stores, movies were solely watched in theaters, leaving studios hesitant to embrace video technology and video stores because they feared for losses in revenues. The first VCRs hit the market in 1975, and shortly thereafter the video rental store boom began.

Extraordinary to think that spools of magnetic tape, easily eroded and prone to tangling, were the medium of choice. But so it was. The 1970s were nothing if not a decade of convenience, and the video cassette was certainly that.

At first, the market was growing slowly because video cassettes were not affordable; however, when the prices dropped in the mid-80s, the market thrived and revenue for home video superseded theatrical box office. Soon enough, America became littered with video shops, both independent and chain stores.

Blockbuster became the most successful of its kind as it “operated like a contemporaneous movie theater, with ‘New Releases’ dominating and ‘opening weekends’ driving customers into the store.”

By May 1988 the number of video specialty stores was estimated to be 25,000, in addition to 45,000 other outlets that also offered video rentals. Groceries rented tapes for as little as $0.49 as loss leaders.

The press discussed the VCR “and the viewing habits it has engendered — the Saturday night trip down to the tape rental store to pick out for a couple of bucks the movie you want to see when you want to see it”. 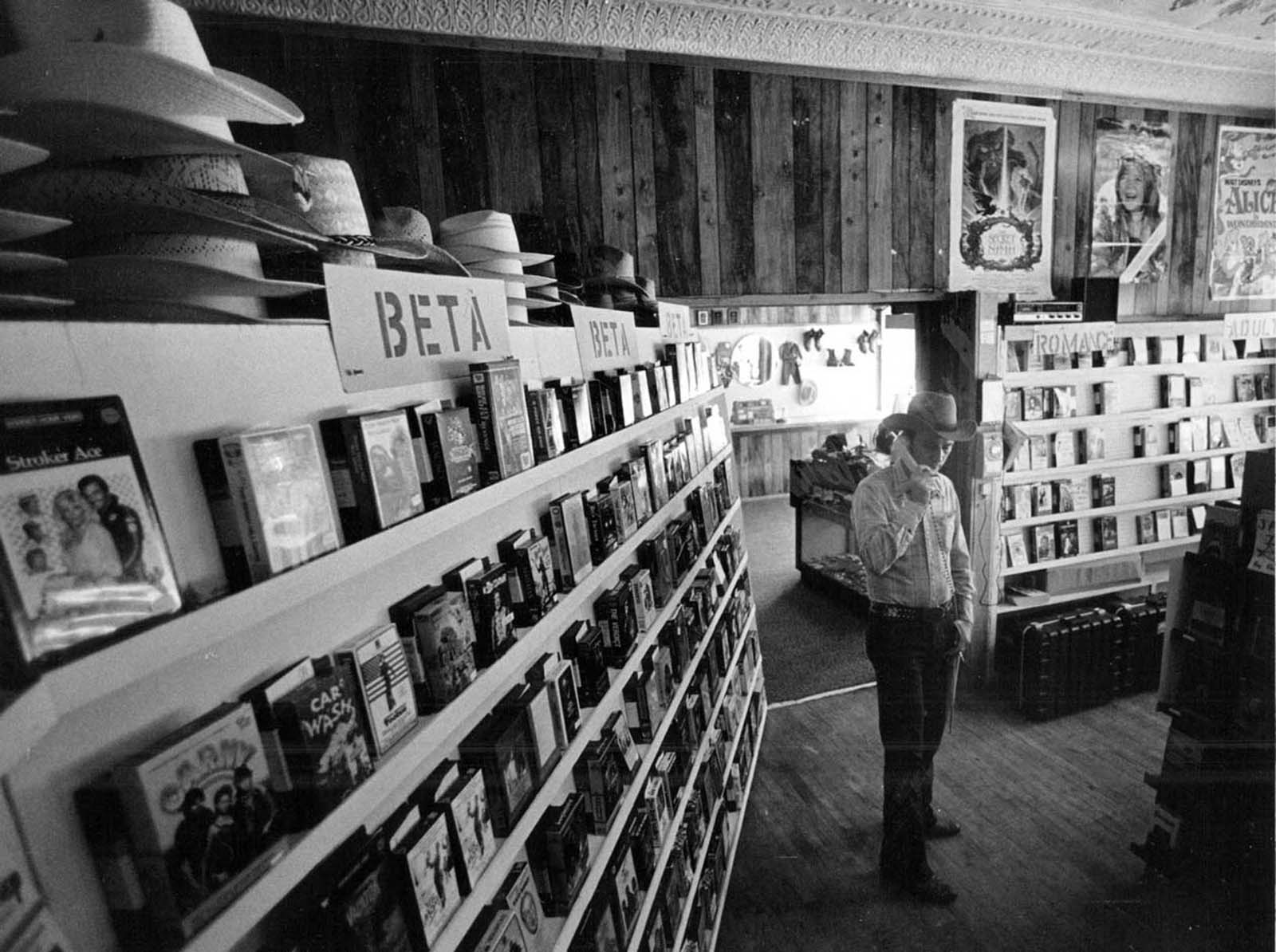 In Castle Rock, Colorado a man answers the phone in the video rental section of his store – including Betamax. 1984.

In the 1980s, it was common for shops to rent equipment—typically VHS recorders—as well as tapes. Some video shops also had adults-only sections containing X-rated videos.

To cope with the videotape format war of the 1970s and 1980s, some stores initially stocked both VHS and Betamax cassettes, while others specialized in one format or the other.

During the 1980s most stores eventually became all-VHS, contributing to the eventual demise of Beta. In the late 1990s, DVDs began appearing in video rental stores.

The widespread availability of video on demand (VOD) on cable TV systems and VHS-by-mail services offered consumers a way of watching movies without having to leave their home. With the advent of the World Wide Web and theInternet streaming services, the era of popular video stores was forever gone. 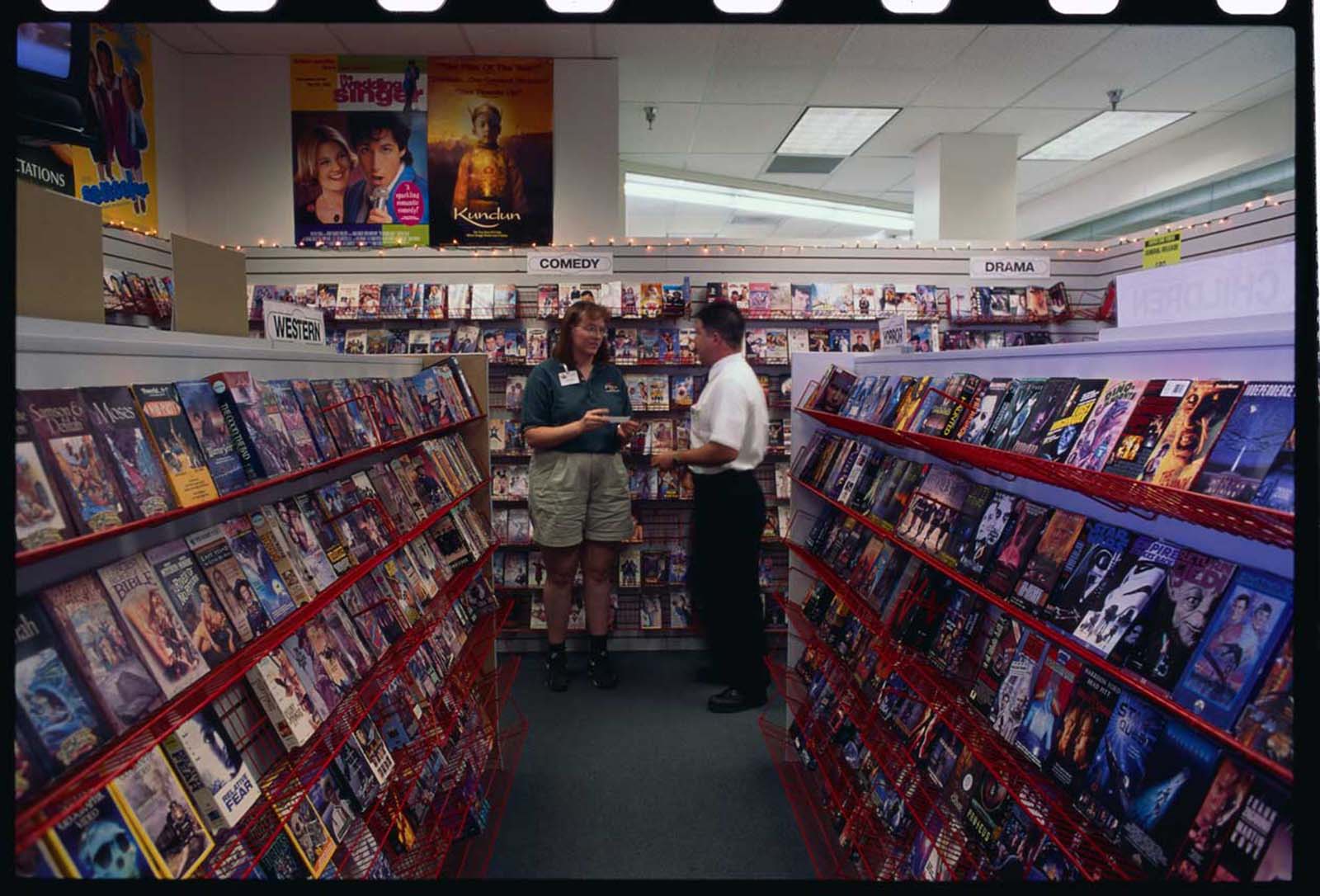 Store manager Ken Broderius talks with an employee in the video rental department of the Rosaurs Super One. 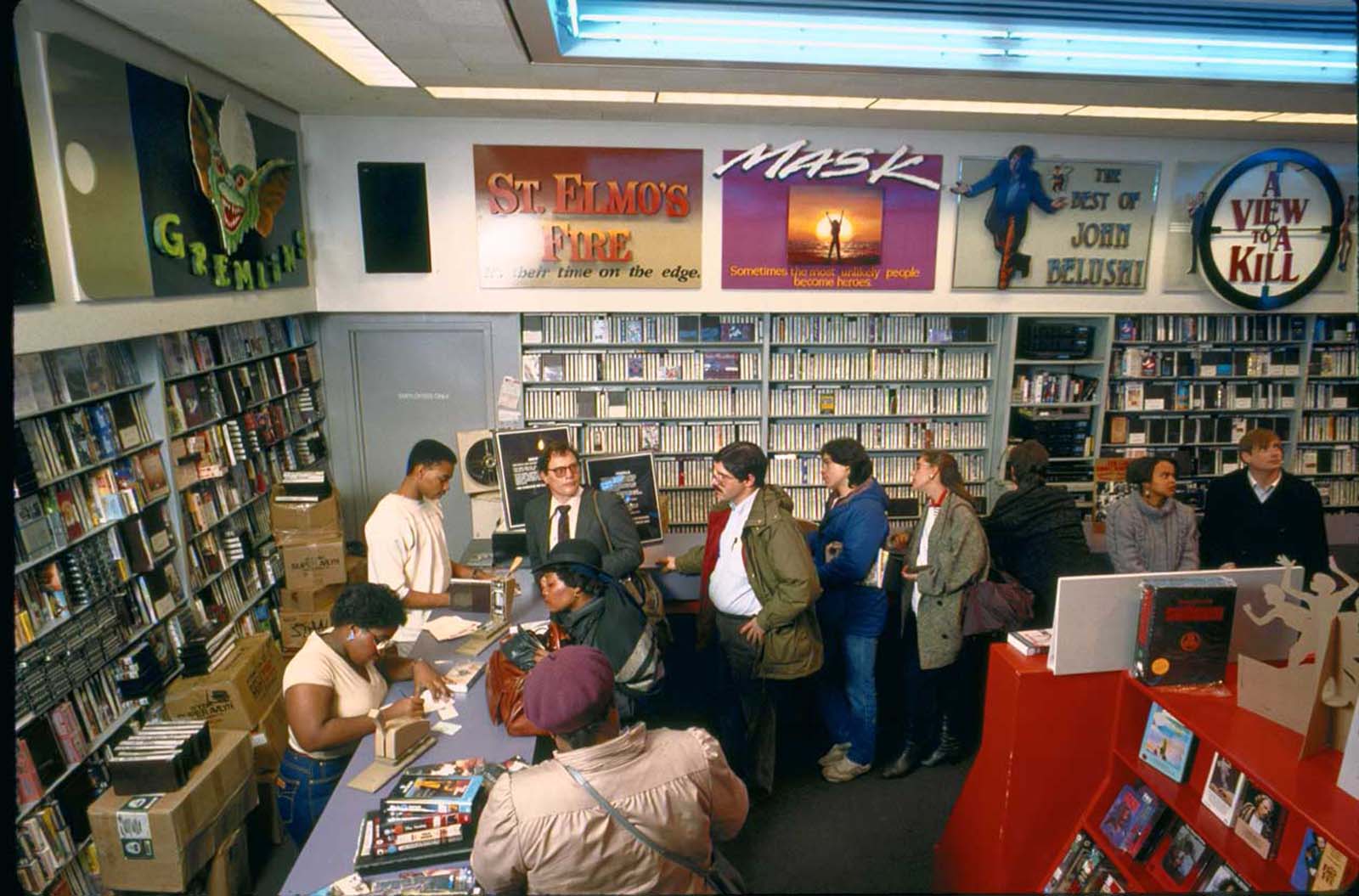 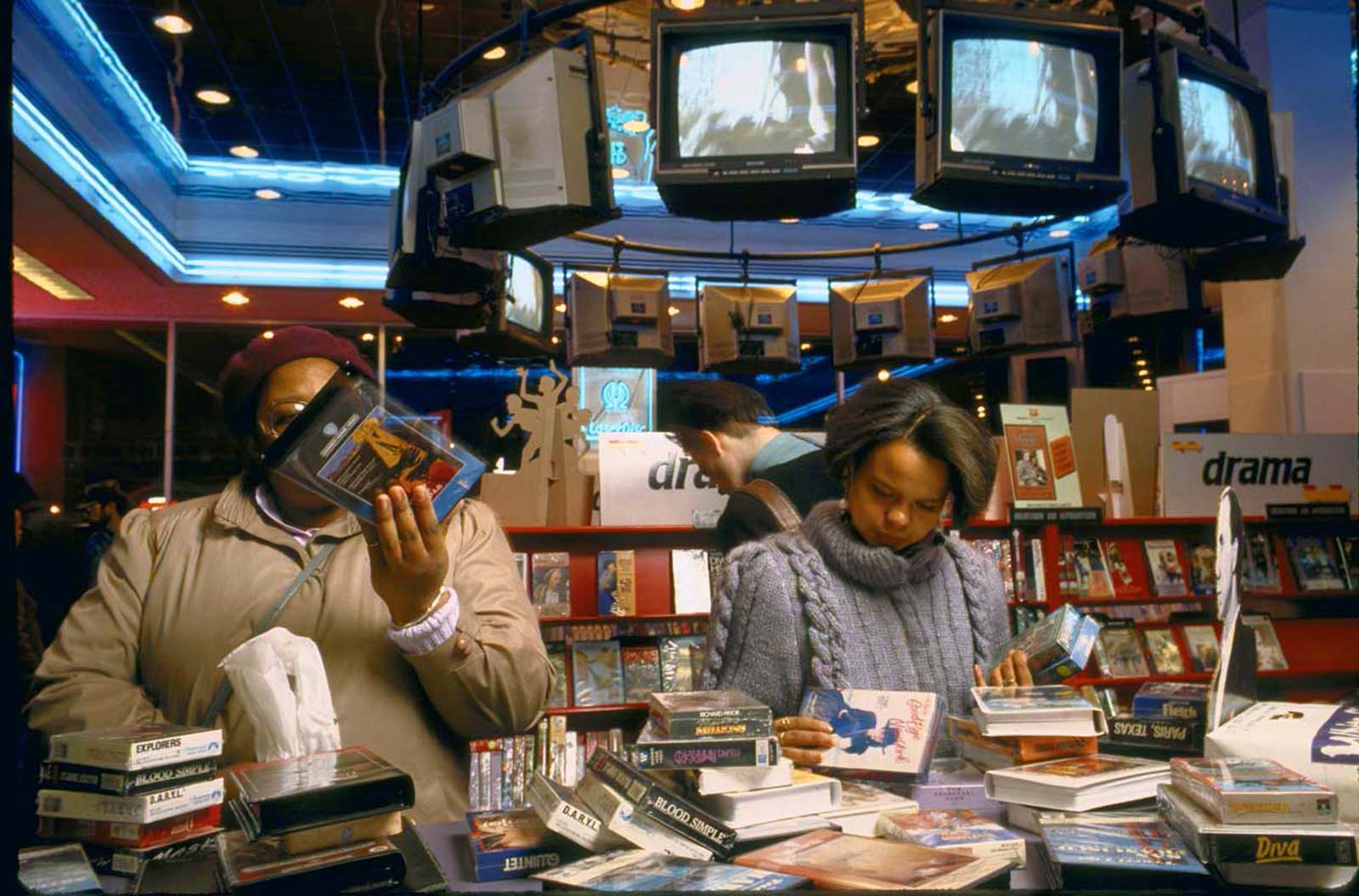 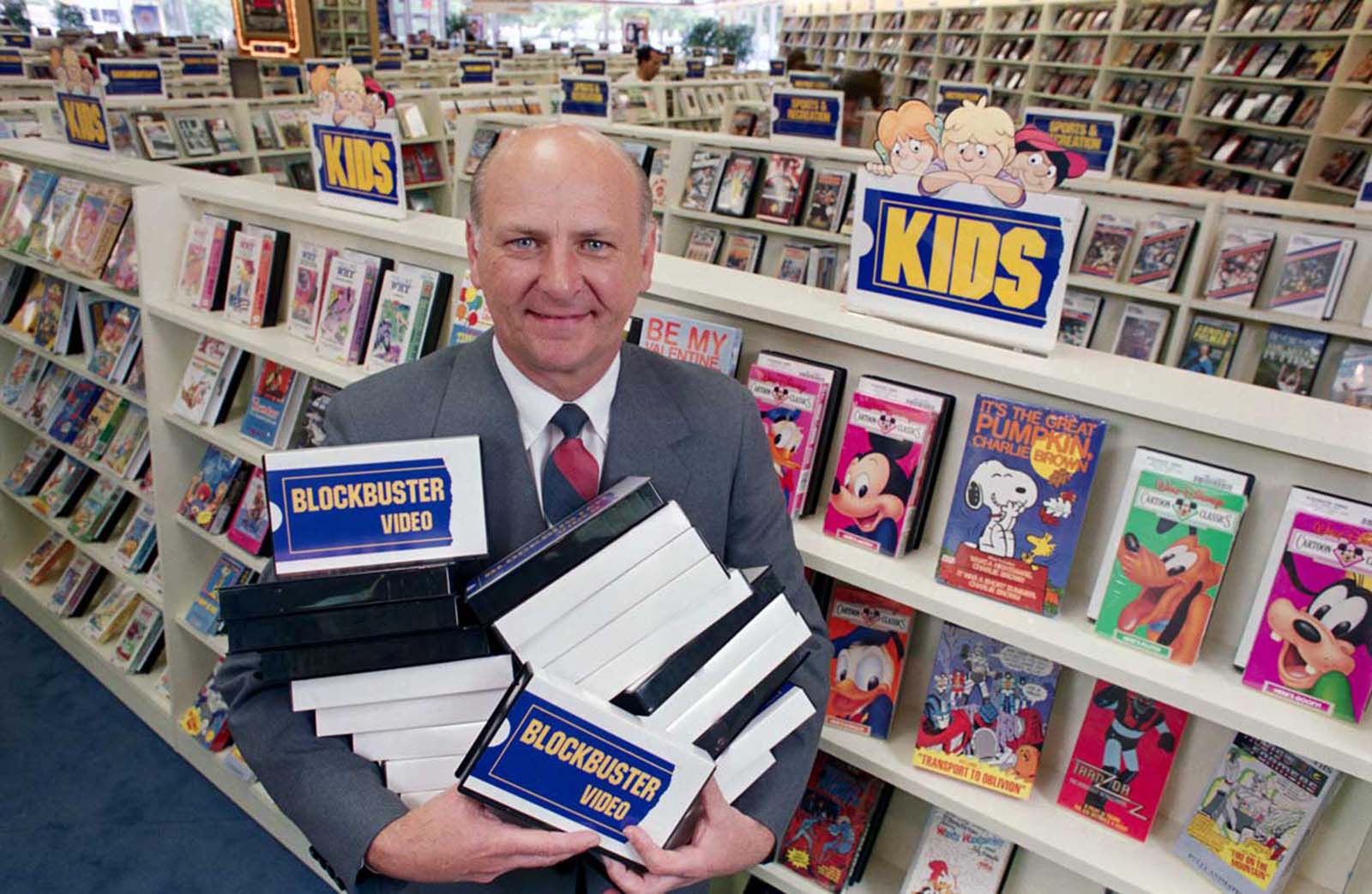 H. Wayne Huizenga, chairman of Blockbuster Entertainment Corporation. The original caption states he “wants to build a nationwide chain of video cassette rental stores. During the first quarter of this year, Blockbuster opened or acquired 84 stores and, as of June 30, they operated 235 stores, up from 19 at the end of 1986.” 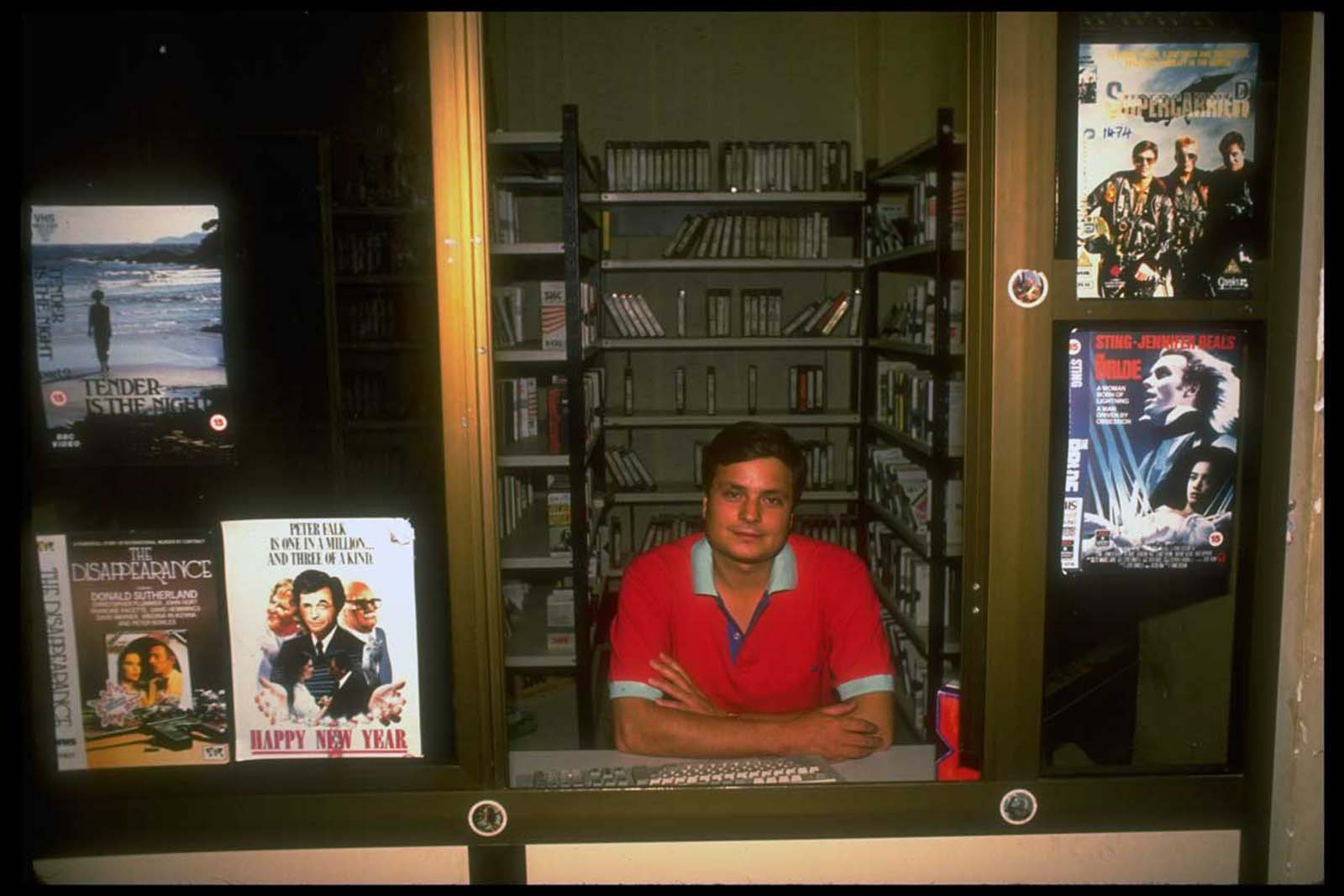 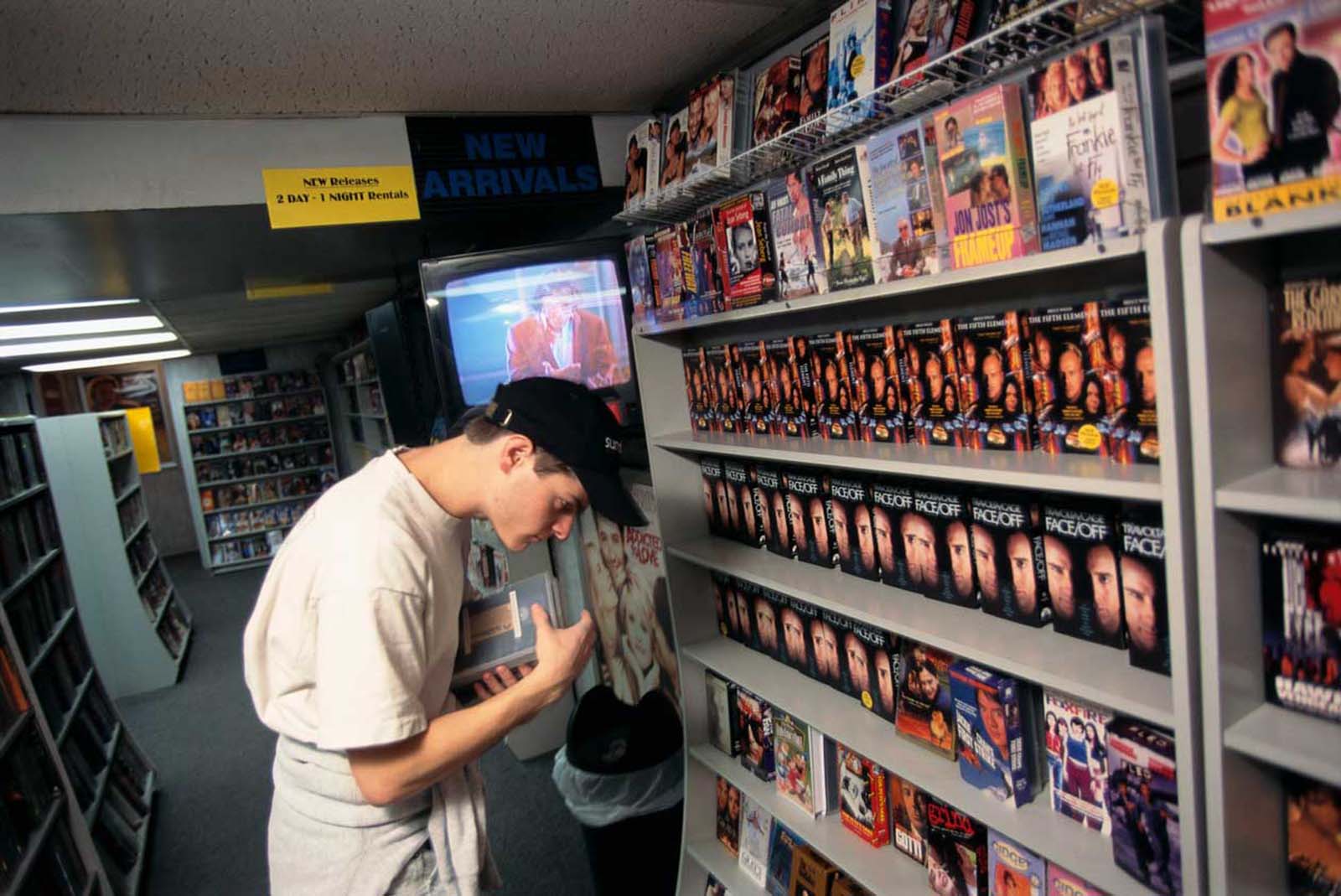 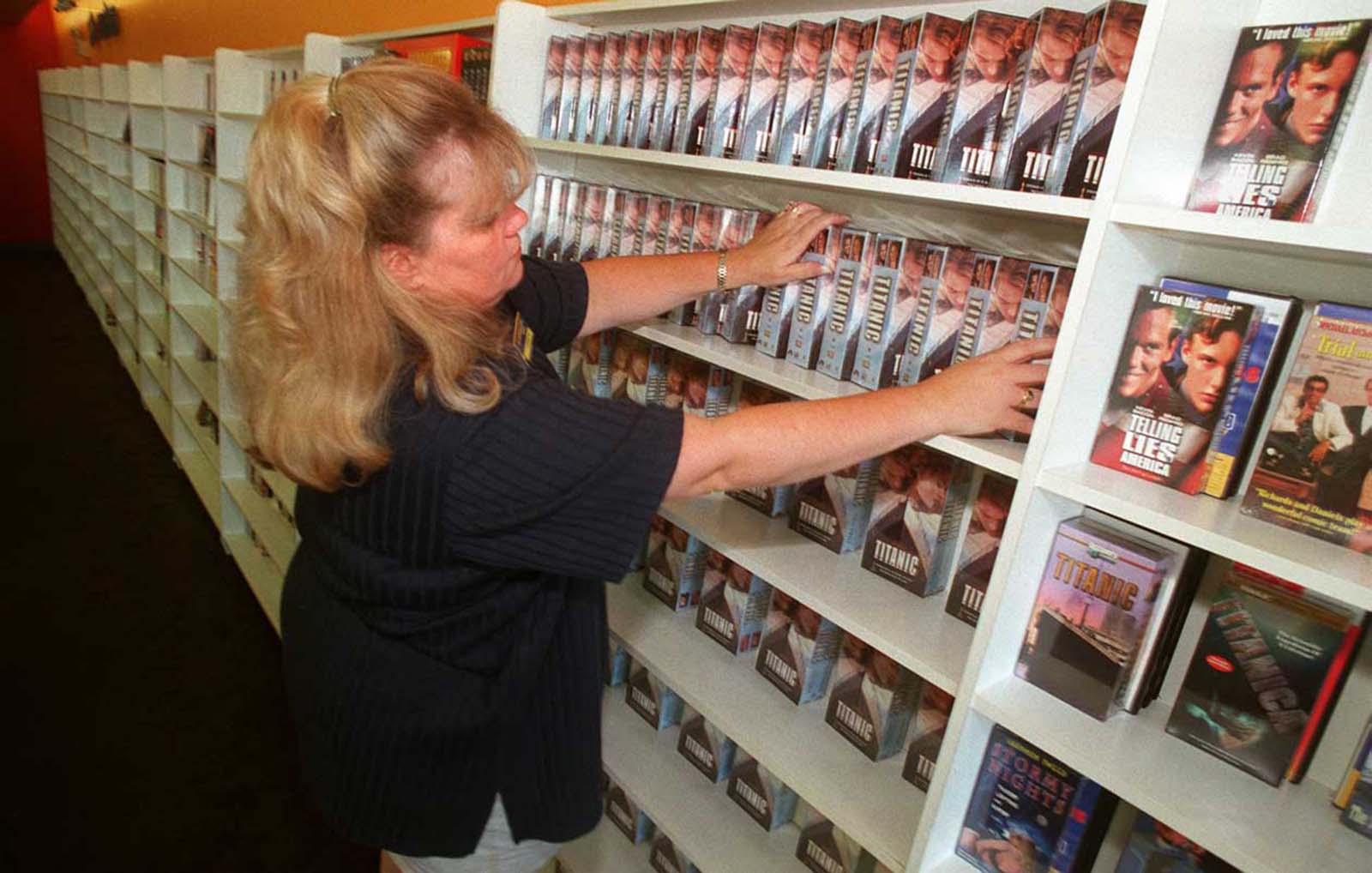 Blockbuster video store manager Doreen Giorgio arranges covers for the Titanic video that will go on sale and be available for rental at midnight. The store obtained 250 videos for rental and 96 for sale. 1998. 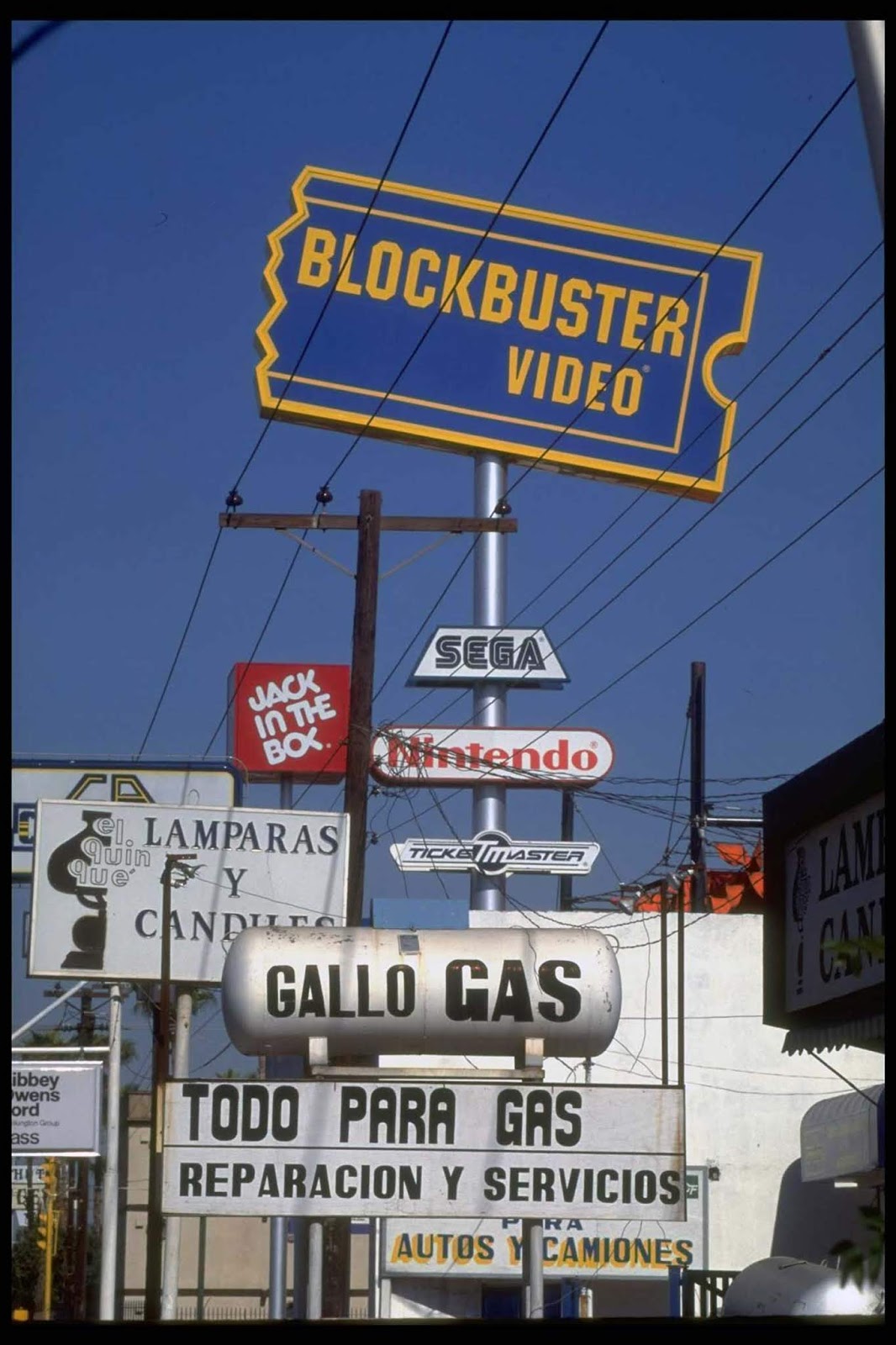