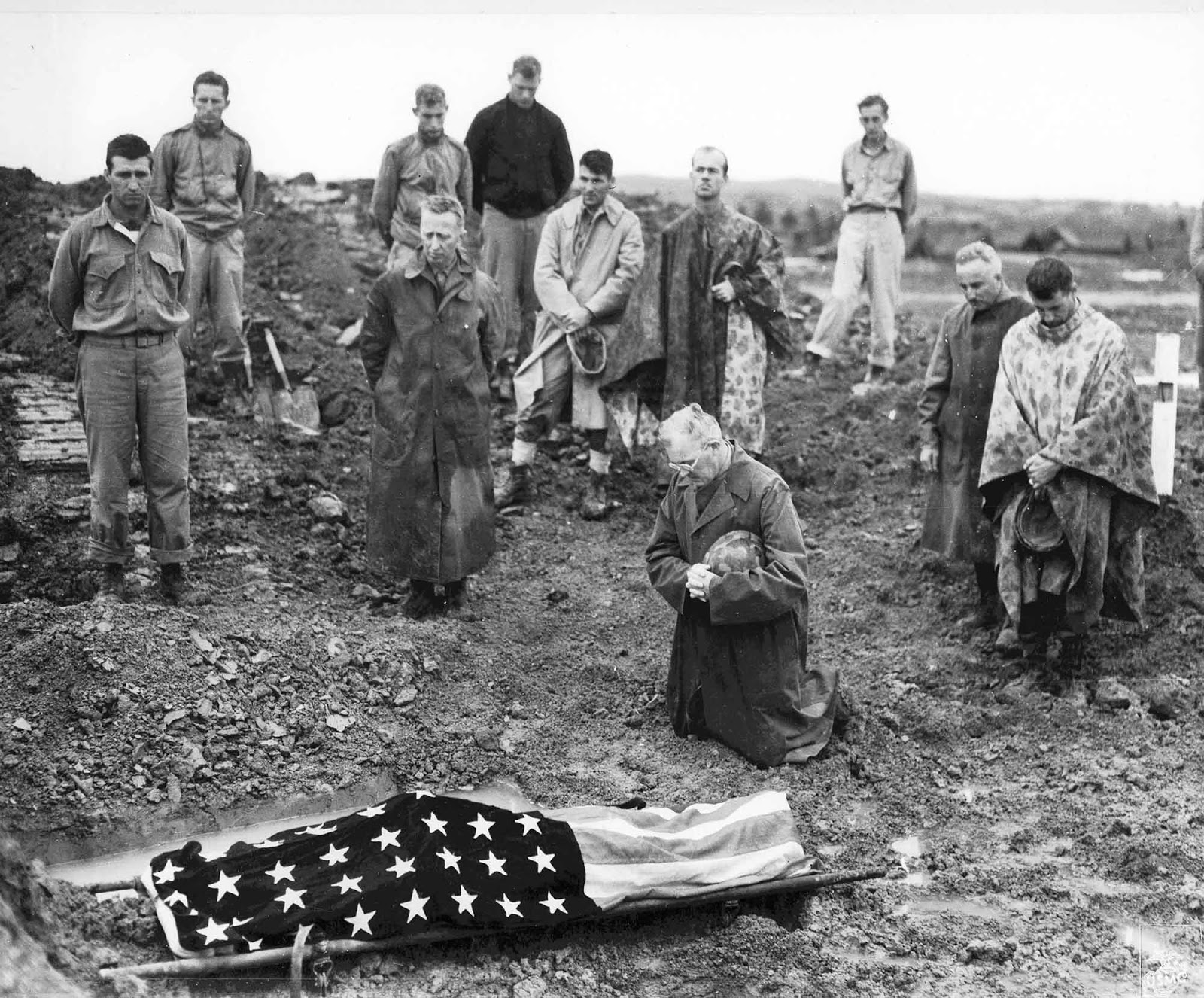 US Marine Colonel Francis Fenton conducting the funeral of his son Private First Class Mike Fenton, near Shuri, Okinawa, May 1945.

This picture depicts one of the most heart wrenching moments to occur on Okinawa involved a family with a proud Marine heritage. Colonel (later Brigadier General) Francis I. Fenton enlisted in the Marine Corps in August 1917. He gradually rose through the ranks until he became division engineer officer of the 1st Marine Division in July 1944. With this unit, Fenton won a Bronze Star for duty at Peleliu before landing on Okinawa.

While Colonel Fenton advanced to higher command, his younger son, Michael, enlisted in the Marine Corps on August 17, 1943, and joined B Company, 1st Battalion, 5th Marine Regiment, 1st Marine Division – the same division in which his father commanded the engineers. Reportedly turning down a commission so he could fight at the front, Michael served as a scout-sniper (on) Okinawa.

Father and son met once during the fighting when their paths crossed at a partially destroyed Okinawan farmhouse. After exchanging news from home, including information on Michael’s older brother, Francis, Jr., who had been commissioned a Marine officer in 1941, the two family members returned to their work.

They would never talk again. On May 7, 1945, while beating back a Japanese counterattack not far from Sugar Loaf, 19-year-old Pfc. Michael Fenton was killed. When his father received the bitter news, he traveled to the site of his son’s death and knelt down to pray over the flagdraped body, a scene that produced one of the Pacific war’s most touching photographs. Upon arising, Colonel Fenton stared at the bodies of other Marine dead and said: ‘Those poor souls. They didn’t have their fathers here’.

After the burial, Colonel Fenton returned to his headquarters and wrote a brief note to his wife, Mary, in San Diego. The soldier then resurfaced. Fenton fixed his attention on a large map hanging in his headquarters, studied it closely for a time, then said to his subordinate, “We’d better double the guard around No. 5 bridge. The Nips may try to blow it”. The war was back on.

Mary Fenton learned of her son’s death before receiving her husband’s letter. In fact, she experienced a bittersweet two days when, on Wednesday, a telegram arrived from the Marine Corps Commandant informing her of Michael’s death. The very next day came news that her husband had been awarded a second Bronze Star.

Mrs. Fenton told reporters she was proud that Michael had done his duty as a Marine. She quoted a recent letter from him in which the youth wrote that he ‘dedicated my life to my country’ and that he was ‘prepared to die”. Both Colonel Fenton and his older son survived the war. Mike’s body was later exhumed from his temporary grave and is now resting in the National Memorial Cemetery of the Pacific in Honolulu, Hawaii.