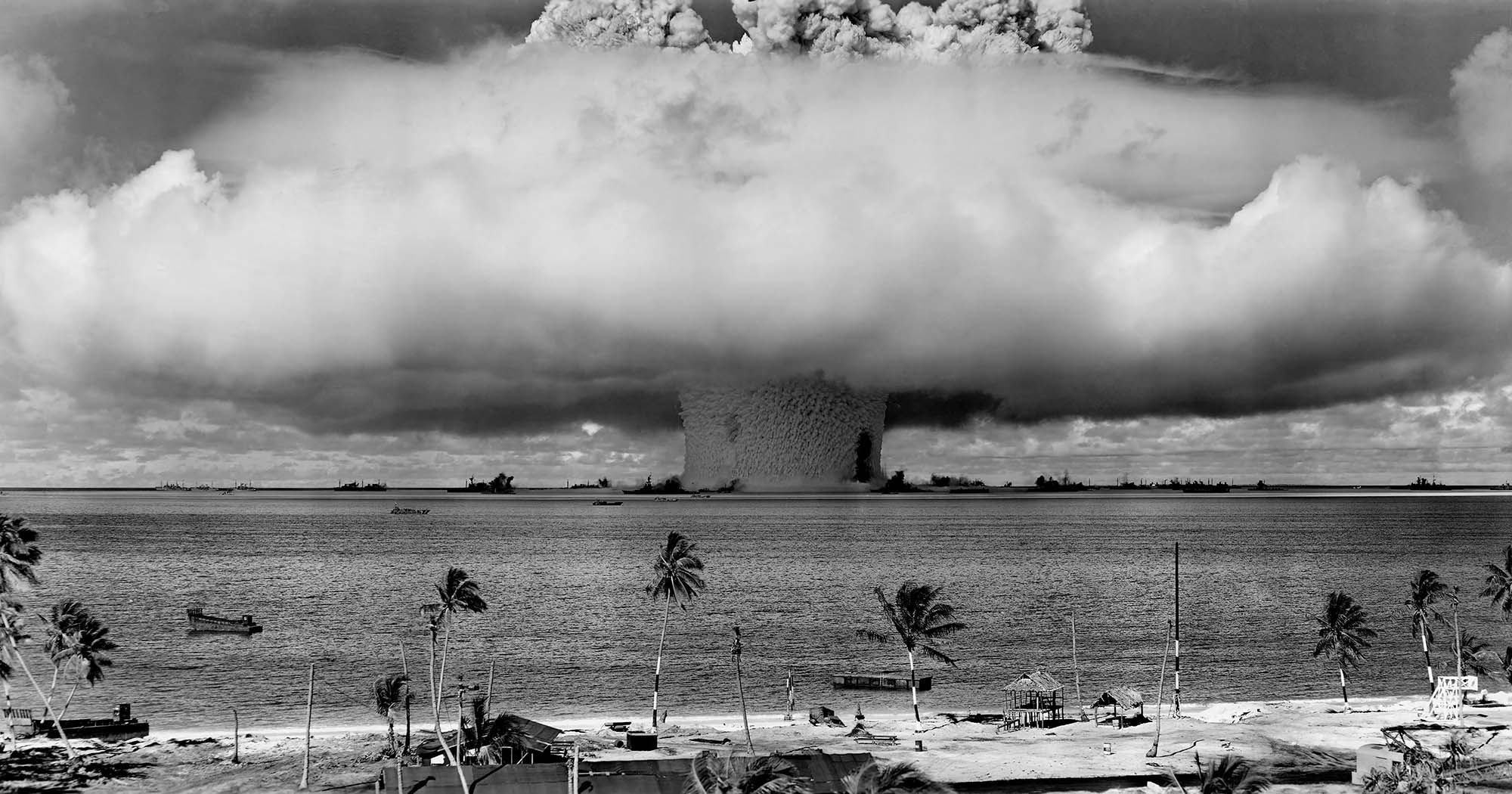 This detonation, known as the Baker Test, was part of Operation Crossroads in Bikini Atoll in the Pacific. The purpose of the tests was to investigate the effect of nuclear weapons on warships. The Crossroads tests were the first of many nuclear tests held in the Marshall Islands and the first to be publicly announced beforehand and observed by an invited audience, including a large press corps.

A fleet of 95 target vessels was assembled in Bikini Lagoon. At the center of the target cluster, the density was 20 ships per square mile (7.7 per km²), three to five times greater than military doctrine would allow.

The stated goal was not to duplicate a realistic anchorage but to measure damage as a function of distance from the blast center, at as many different distances as possible. 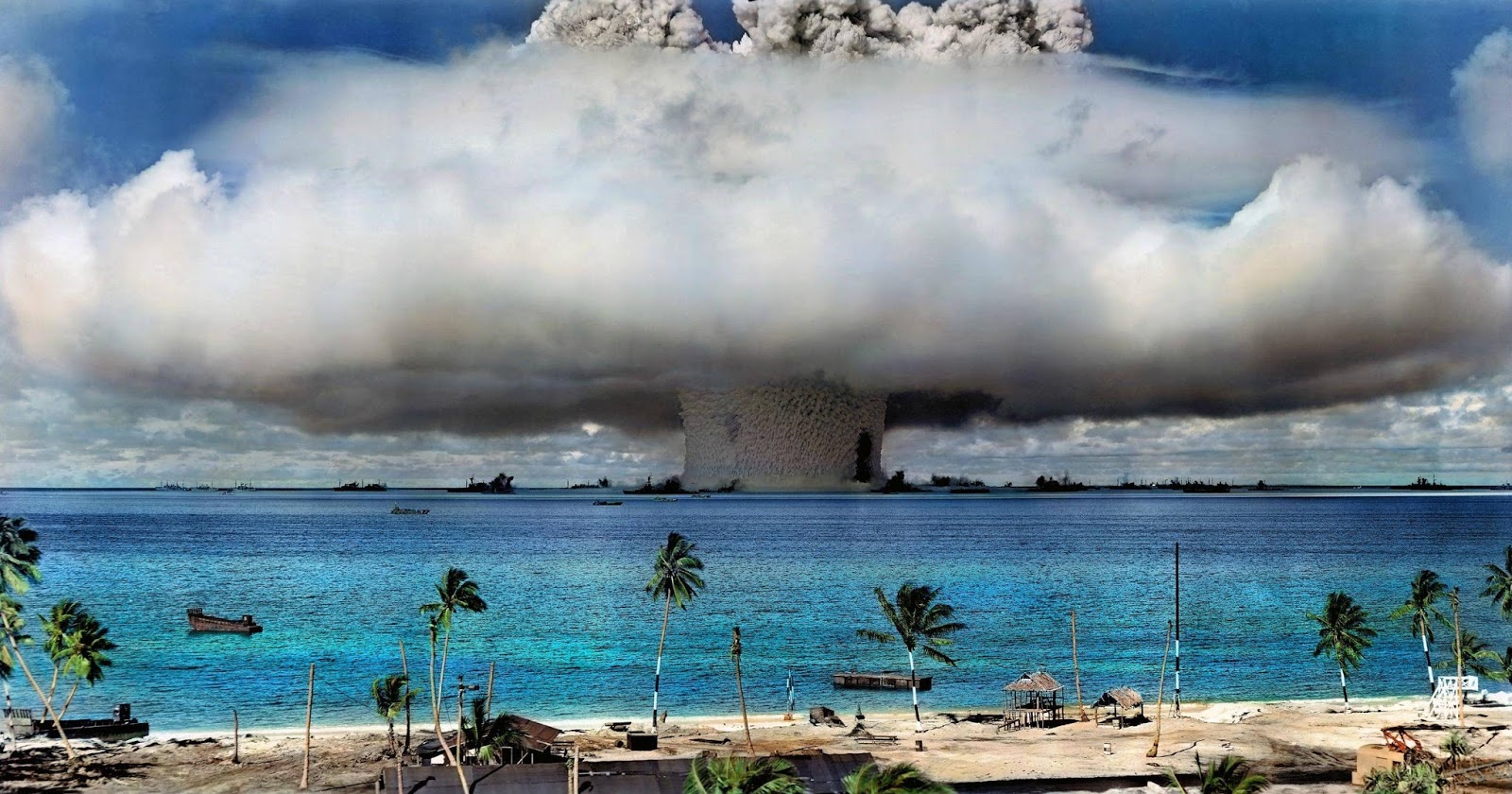 The ships carried sample amounts of fuel and ammunition plus scientific instruments to measure air pressure, ship movement, and radiation. The live animals on some of the target ships were supplied by the support ship USS Burleson, which brought 200 pigs, 60 guinea pigs, 204 goats, 5,000 rats, 200 mice, and grains containing insects to be studied for genetic effects by the National Cancer Institute. Amphibious target ships were berthed on Bikini Island.

In Baker on July 25, the weapon was suspended beneath landing craft LSM-60 anchored in the midst of the target fleet. Baker was detonated 90 feet (27 m) underwater, halfway to the bottom in water 180 feet (55 m) deep with a yield of 23 kilotons. No identifiable part of LSM-60 was ever found; it was presumably vaporized by the nuclear fireball.

The Baker shot produced so many unusual phenomena that a conference was held two months later to standardize nomenclature and define new terms for use in descriptions and analysis. The underwater fireball took the form of a rapidly expanding hot gas bubble that pushed against the water, generating a supersonic hydraulic shock wave that crushed the hulls of nearby ships as it spread out.

When the gas bubble’s diameter equaled the water depth, 180 feet (55 m), it hit the seafloor and the sea surface simultaneously. At the bottom, it started digging a shallow crater, ultimately 30 feet (9 m) deep and 2,000 feet (610 m) wide.

At the top, it pushed the water above it into a “spray dome,” which burst through the surface like a geyser. Elapsed time since detonation was four milliseconds. 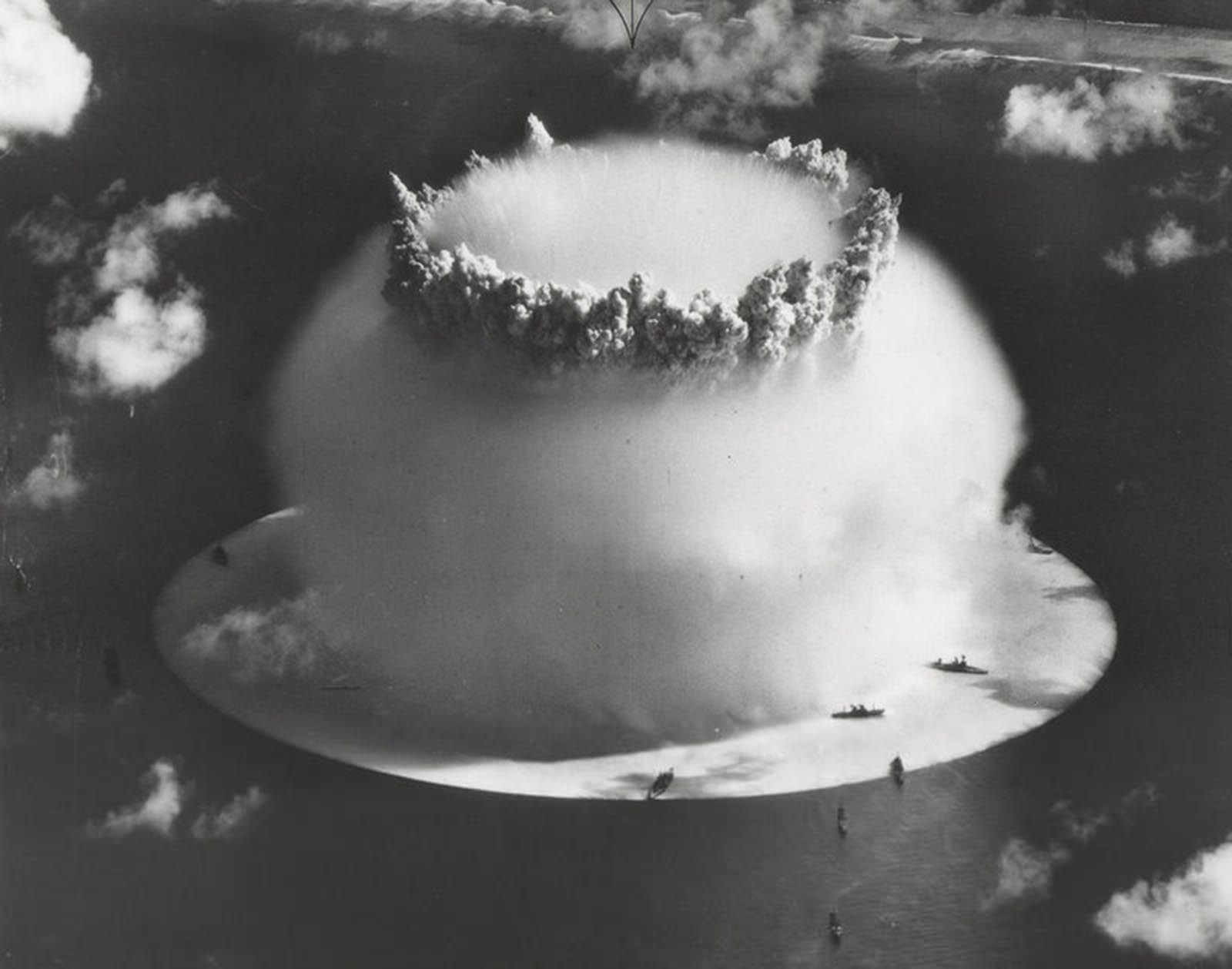 Crossroads Baker, showing the white surface “crack” under the ships, and the top of the hollow spray column protruding through the hemispherical Wilson cloud. Bikini Island beach in the background.

As soon as the bubble reached the air, it started a supersonic atmospheric shock wave which, like the crack, was more visually dramatic than destructive. Brief low pressure behind the shock wave caused instant fog which shrouded the developing column in a “Wilson cloud”, also called a “condensation cloud”, obscuring it from view for two seconds.

Following test Baker decontamination problems, the United States Navy equipped newly constructed ships with a CounterMeasure WashDown System (CMWDS) of piping and nozzles to cover exterior surfaces of the ship with a spray of salt water from the firefighting system when nuclear attack appeared imminent. The film of flowing water would theoretically prevent contaminants from settling into cracks and crevices.