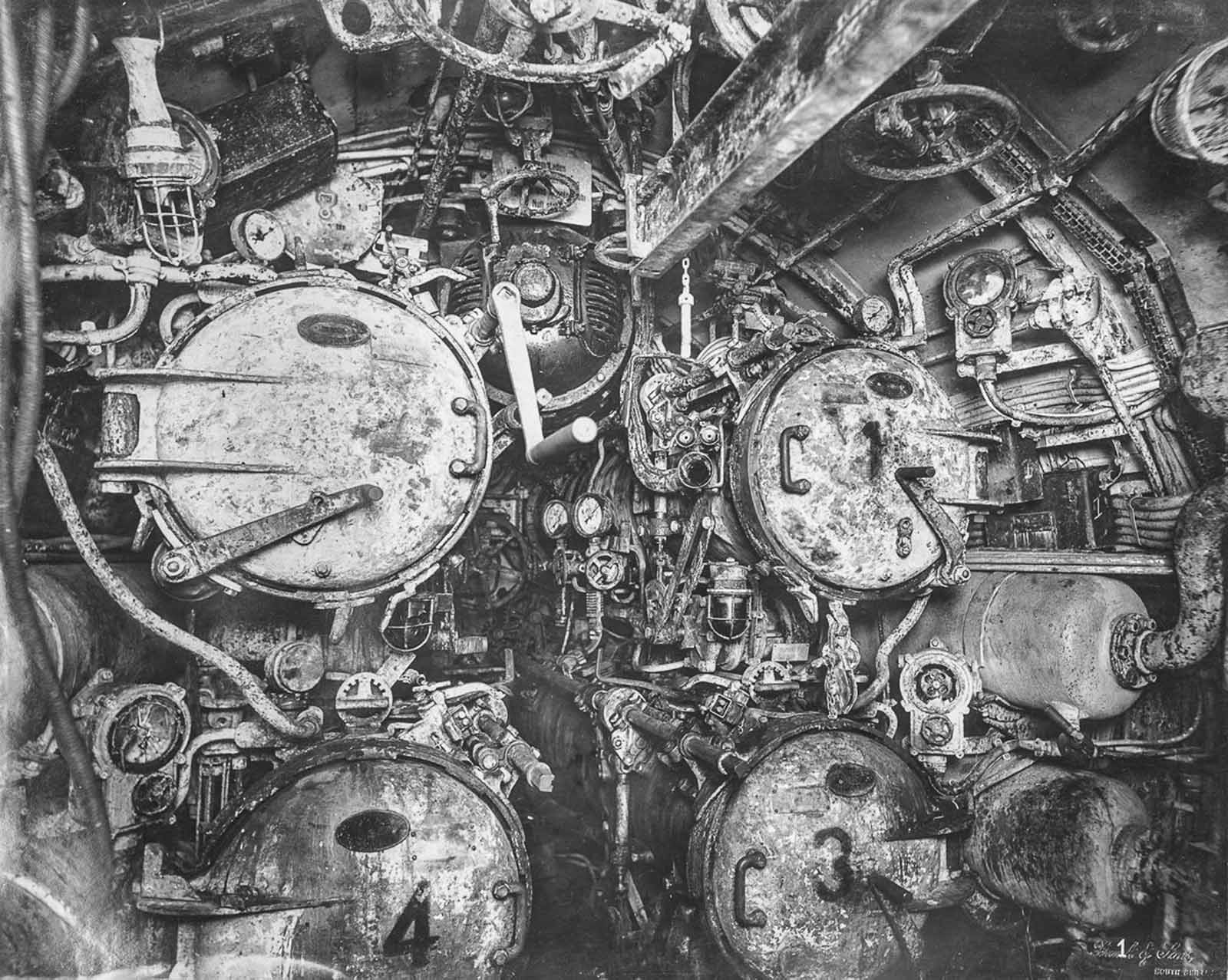 These photographs show the UB 110, a German submarine that was sunk and risen in 1918. We can see the control room in the submarine, including the manhole to the periscope well, hand wheels for pressure gear, valve wheels for flooding and blowing, and air pressure gauges.

SM UB-110 was built by Blohm & Voss of Hamburg. After just under a year of construction, she was launched at Hamburg on 1 September 1917 and commissioned in the spring of 1918 under the command of Kptlt. Werner Fürbringer. Like all Type UB III submarines, UB-110 carried ten torpedoes and was armed with an 8.8 cm (3.46 in) deck gun.

On 19 July 1918, while under the command of Kapitänleutnant Werner Fürbringer, SM UB-110 was depth charged, rammed, and sunk near the Tyne by HMS Garry, commanded by Charles Lightoller, possibly the last U-boat to be sunk during the Great War. 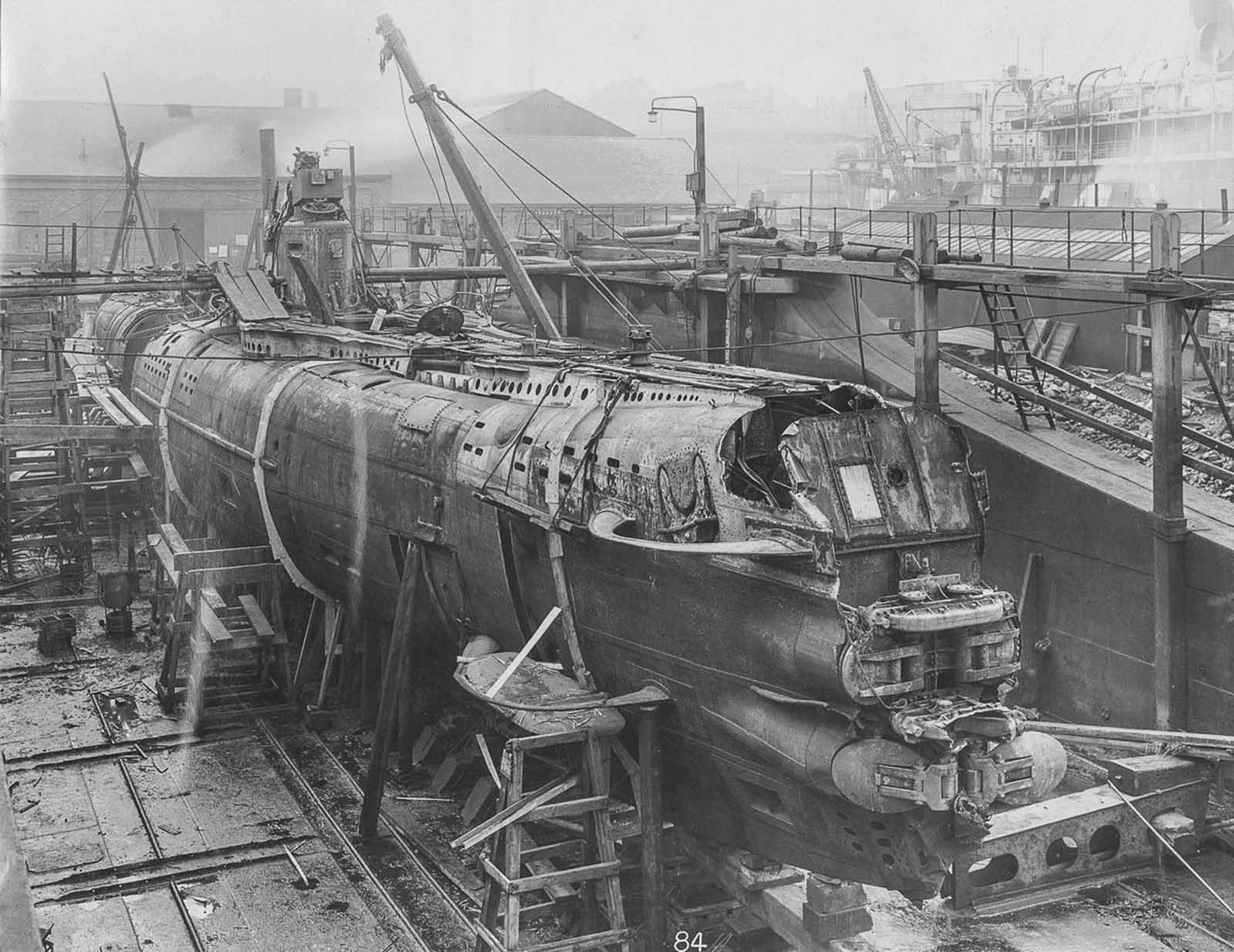 In his postwar memoirs, Fürbringer alleged that, after the sinking, HMS Garry hove to and opened fire with revolvers and machine guns on the unarmed survivors of UB-110.

During the ensuing massacre, Fürbringer watched the skull of an 18-year old member of his crew being split open by a lump of coal hurled by a Royal Navy sailor. When Fürbringer attempted to help a wounded officer to swim, he was told, “Let me die in peace. The swine are going to murder us anyhow”.

The shooting only ceased when the convoy the destroyer had been escorting and which contained many neutral-flagged ships, arrived on the scene. He later recalled: “As if by magic the British now let down some lifeboats into the water”.

Lieutenant Commander Lightoller was awarded a bar to his Distinguished Service Cross for sinking UB-110. A total of 23 members of UB-110’s crew died during the sinking and the alleged ensuing massacre.

In September UB-110 was salvaged and placed in the admiralty dock, with an order to restore her to fighting state but this time to the British side. The Armistice, that ended World War One, caused work on her restoration to be stopped. She was towed on another dock and was subsequently sold as scrap.

An unsettling discovery during her salvage was that some of her torpedoes were fitted with magnetic firing pistols – the first such to be identified properly by the British. Luckily, these early examples were proving problematic, often detonating their weapons prematurely if at all.

The magnetic pistol is the term for the device on a torpedo or naval mine that detects its target by its magnetic field and triggers the fuse for detonation.

A magnetic pistol on a torpedo allows the torpedo to detonate underneath the ship, instead of upon impact with the side of the ship. The explosion will lift the ship out of the water and may break the back of the ship, splitting it in two. 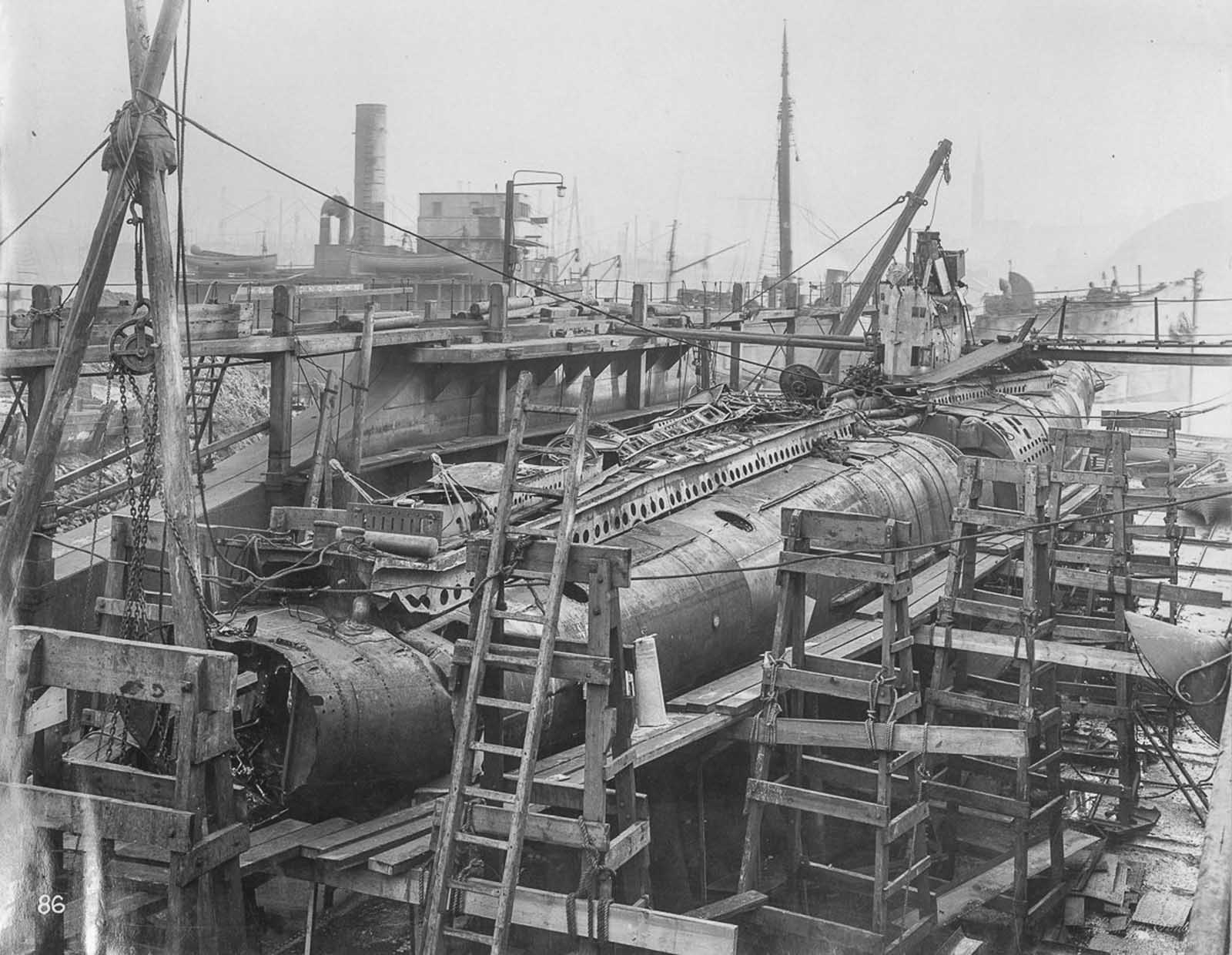 The UB-110 was rammed after attacking a merchant shipping convoy near Hartlepool in July 1918.

How did the sailors identify those valves and wheels?

Actually, these photos were taken after the submarine was recovered from the bottom of the ocean. The control room was covered with rust and slime. Many of the gears and wheels were color-coded, some of them had numbers. Usually, the sailors learned pretty well maneuvering on the control room, for them wasn’t difficult at all.

Unrestricted submarine warfare in early 1917 was initially very successful, sinking a major part of Britain-bound shipping. Nevertheless, with the introduction of escorted convoys, shipping losses declined and in the end, the German strategy failed to destroy sufficient Allied shipping. 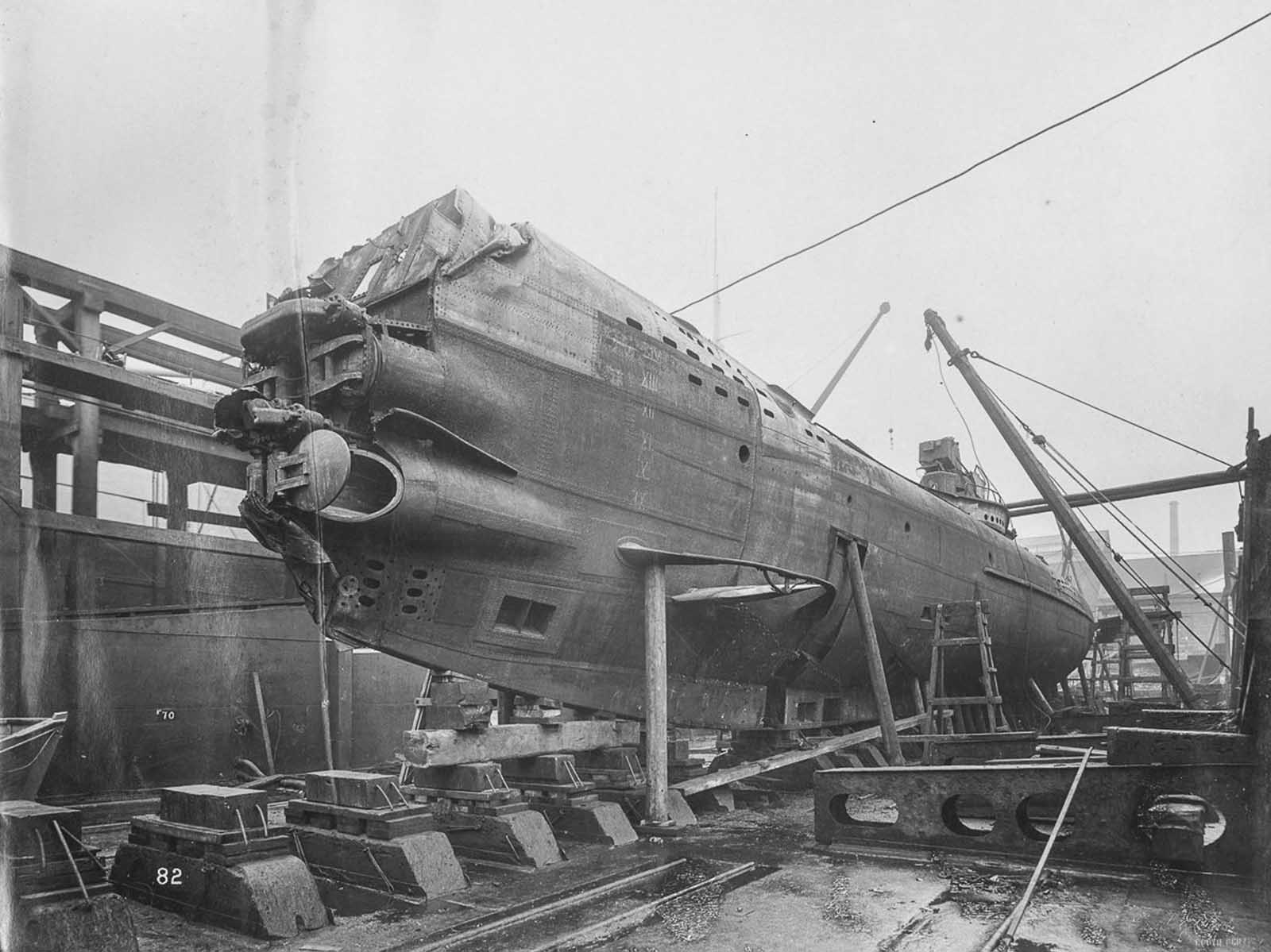 In September she was salvaged and placed in the admiralty dock. 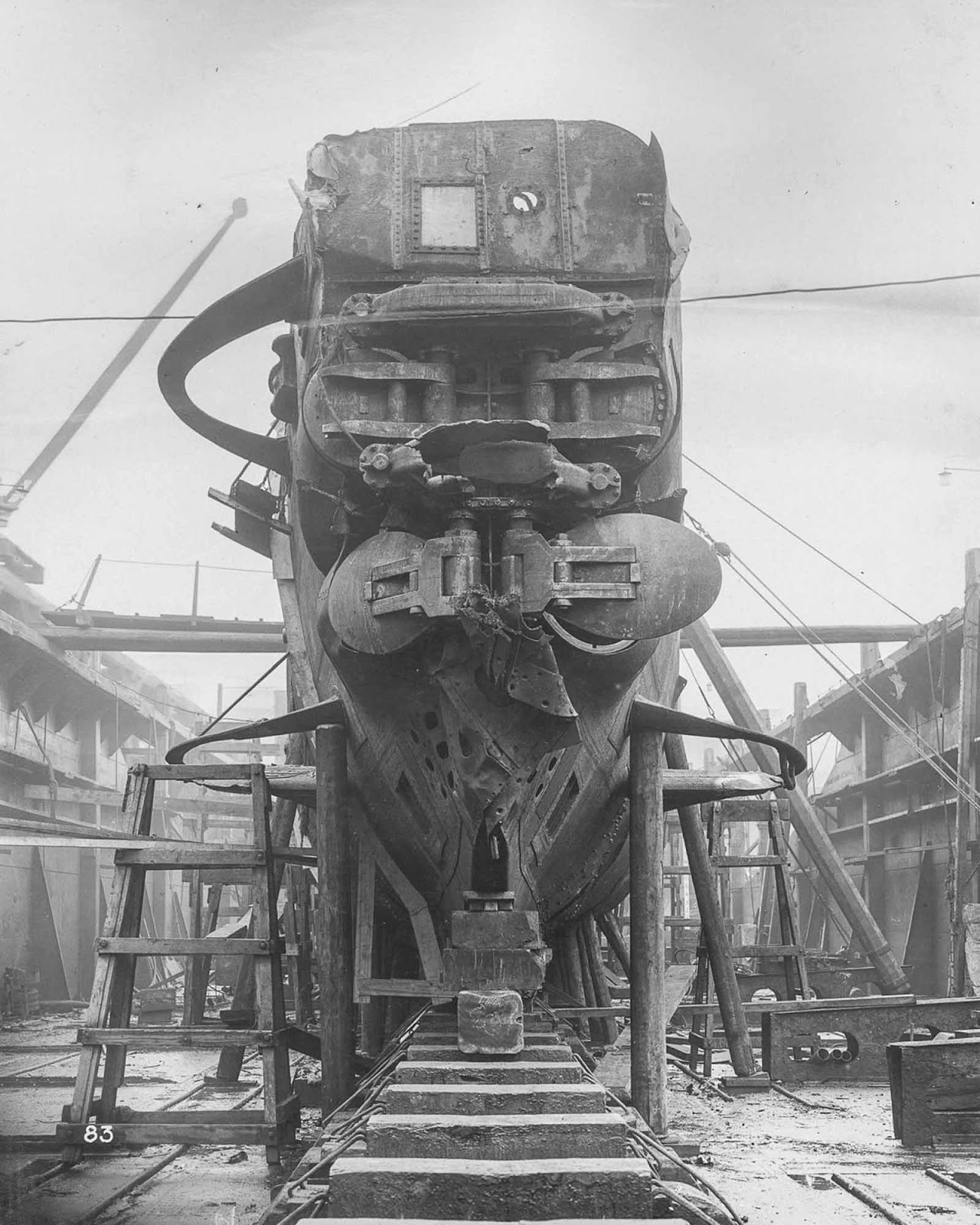 There was an order to restore her to fighting state but this time to the British side. 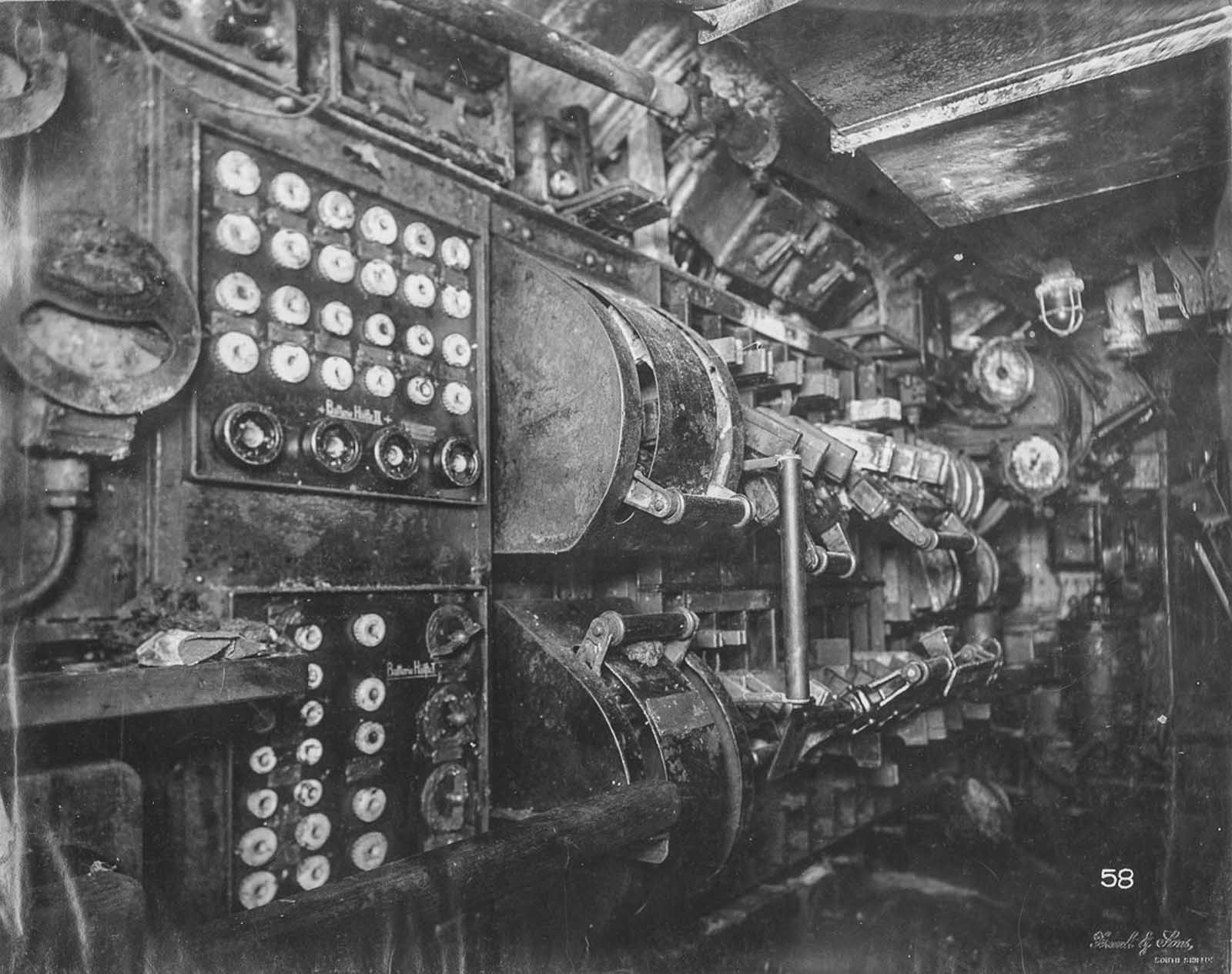 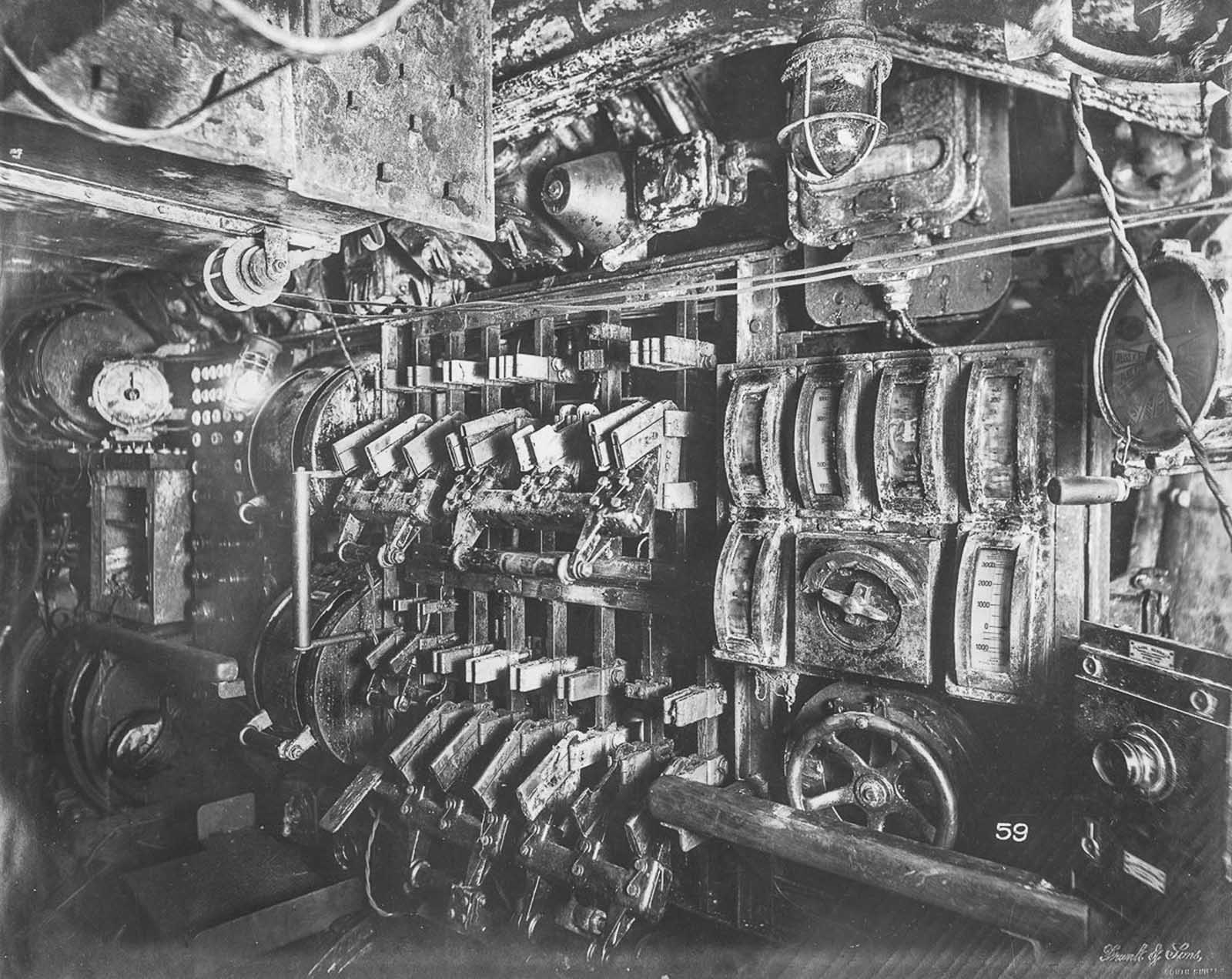 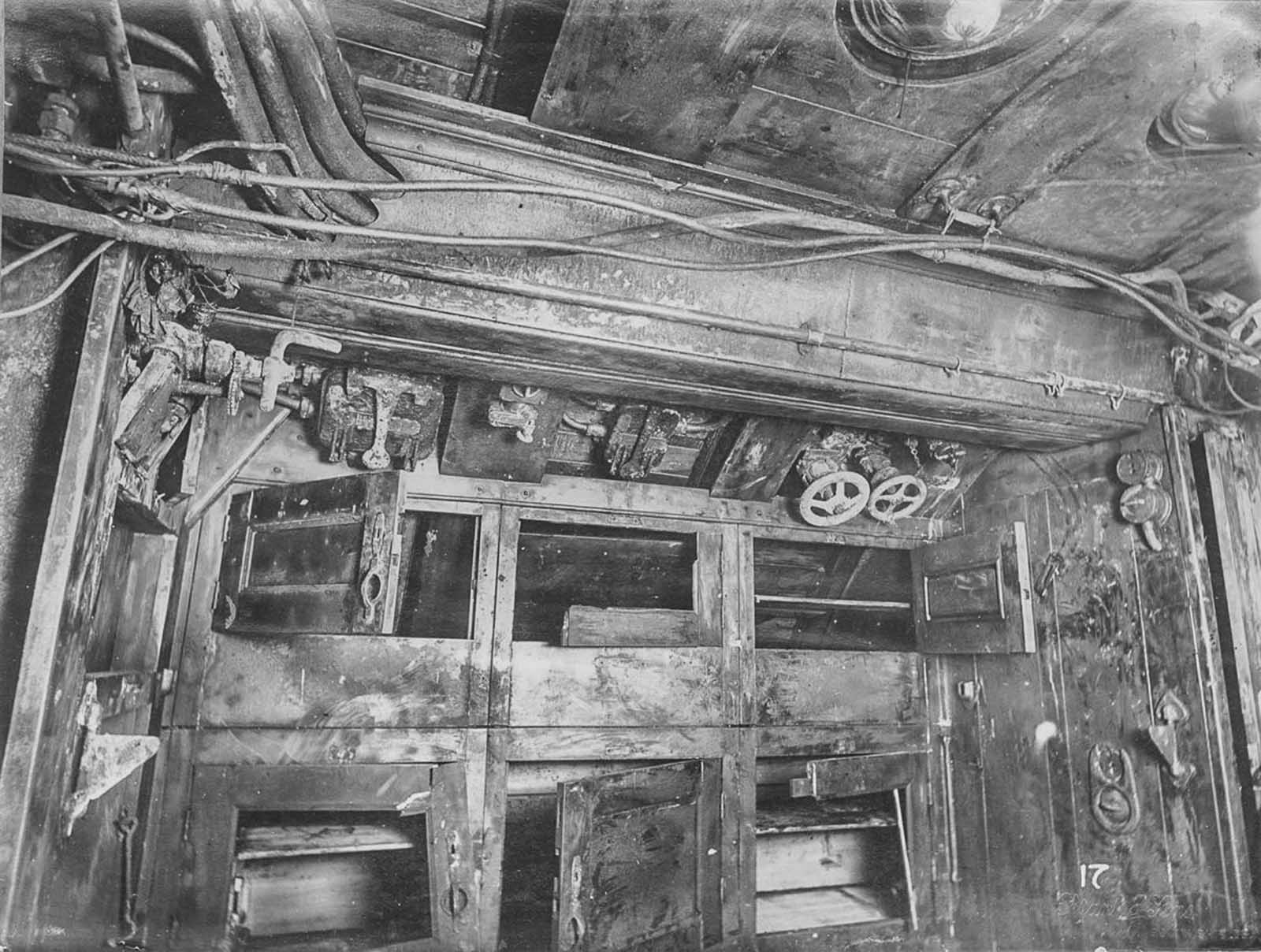 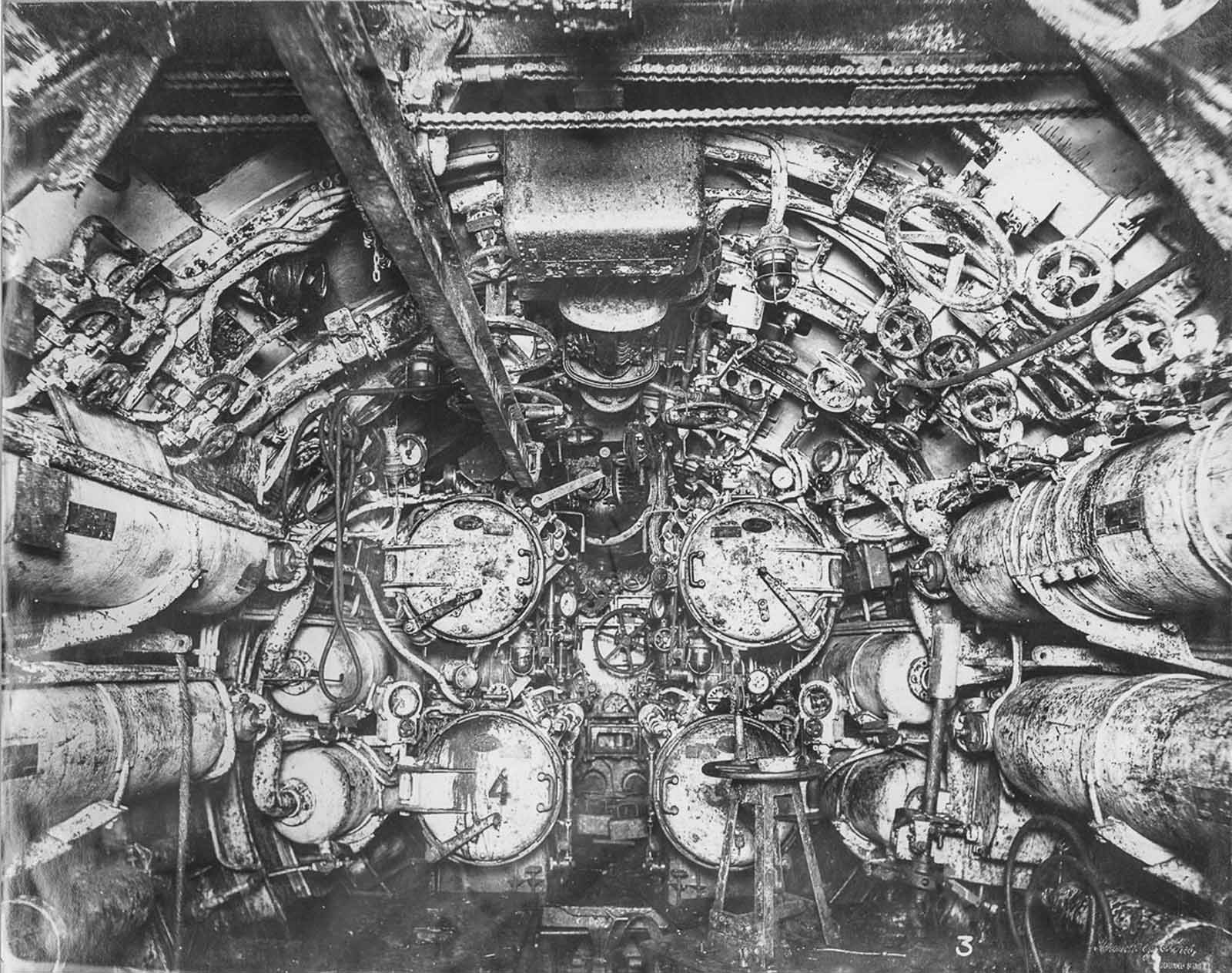 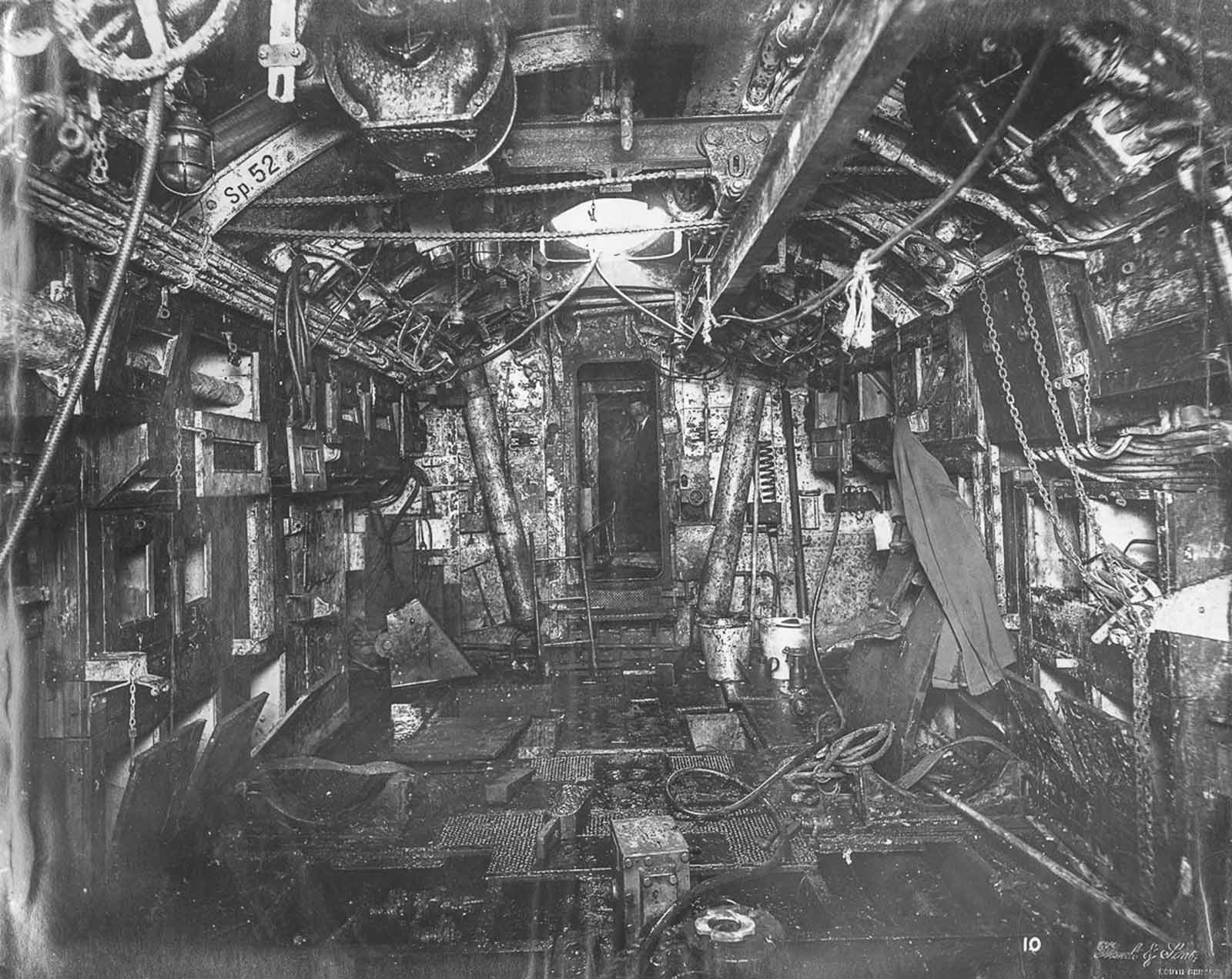 Torpedo room looking aft. The beam for lifting torpedoes into place is overhead. 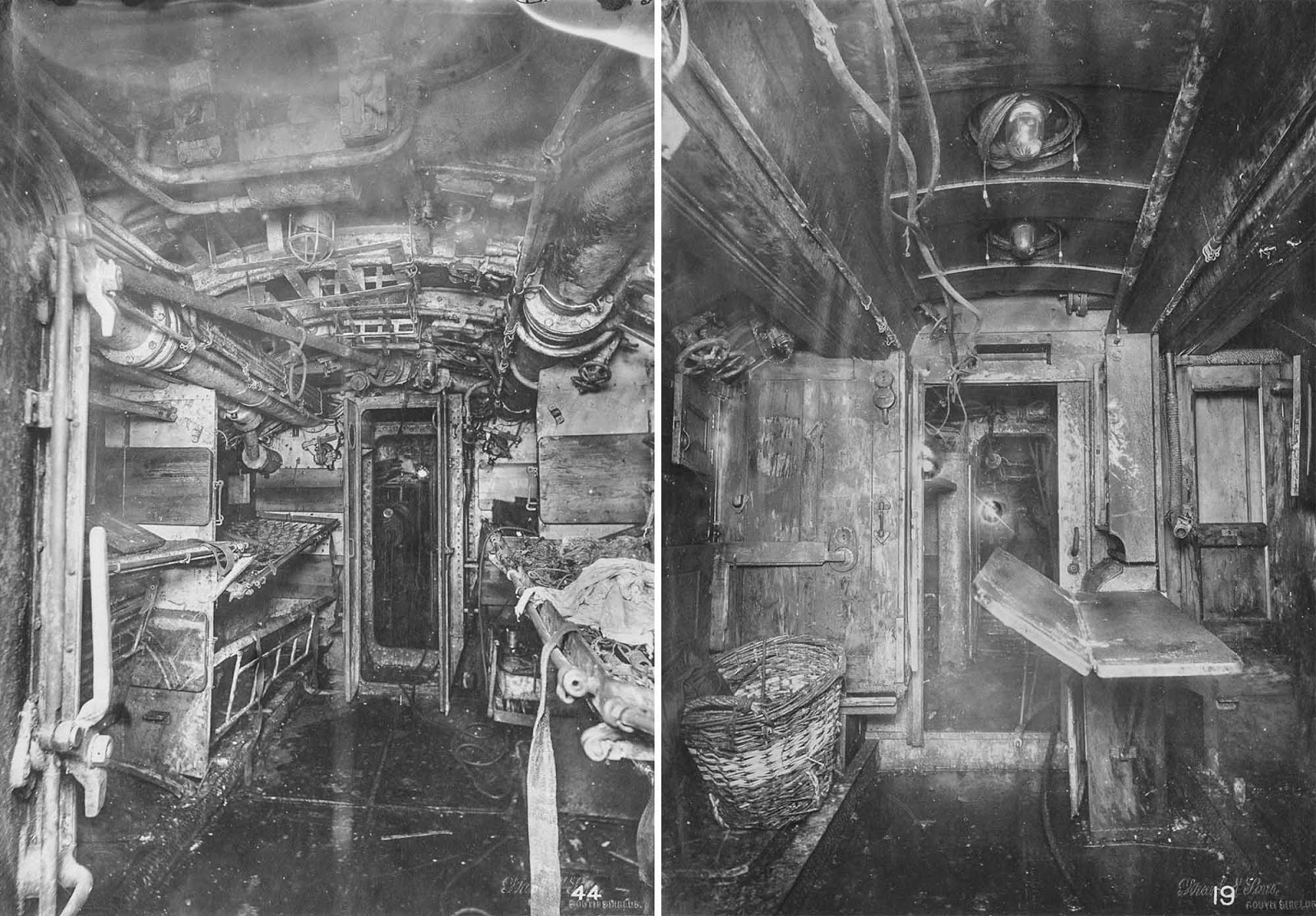 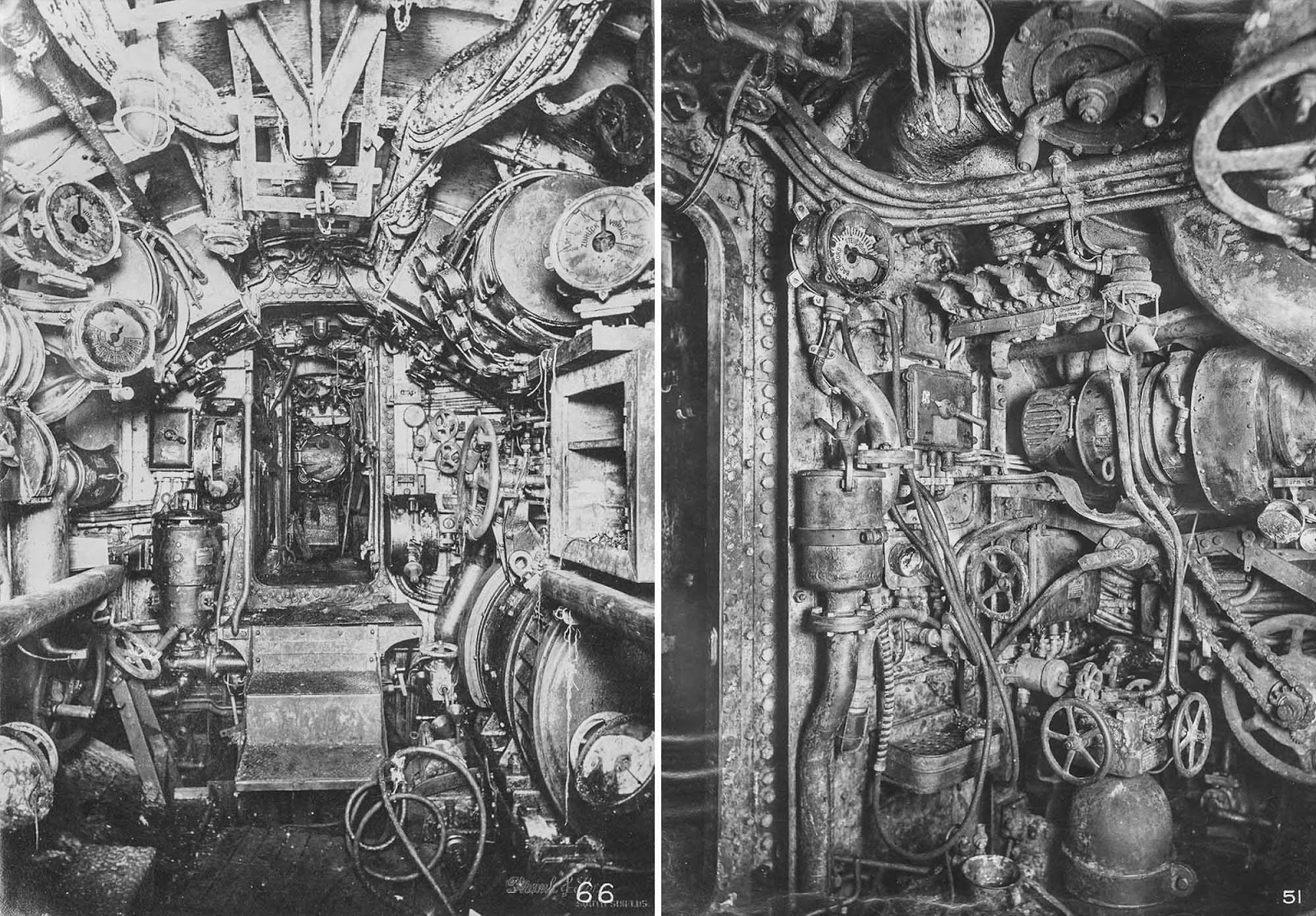 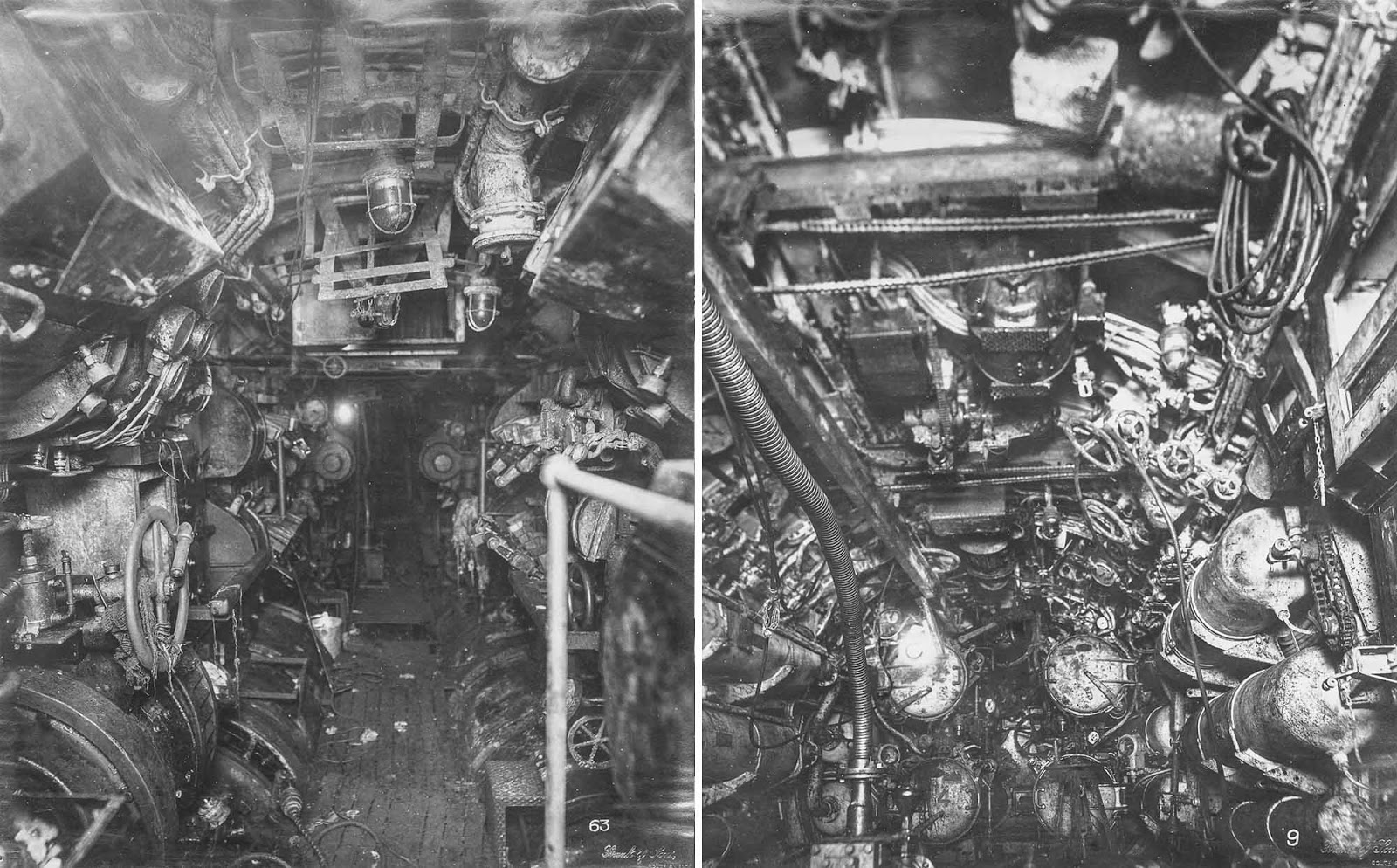 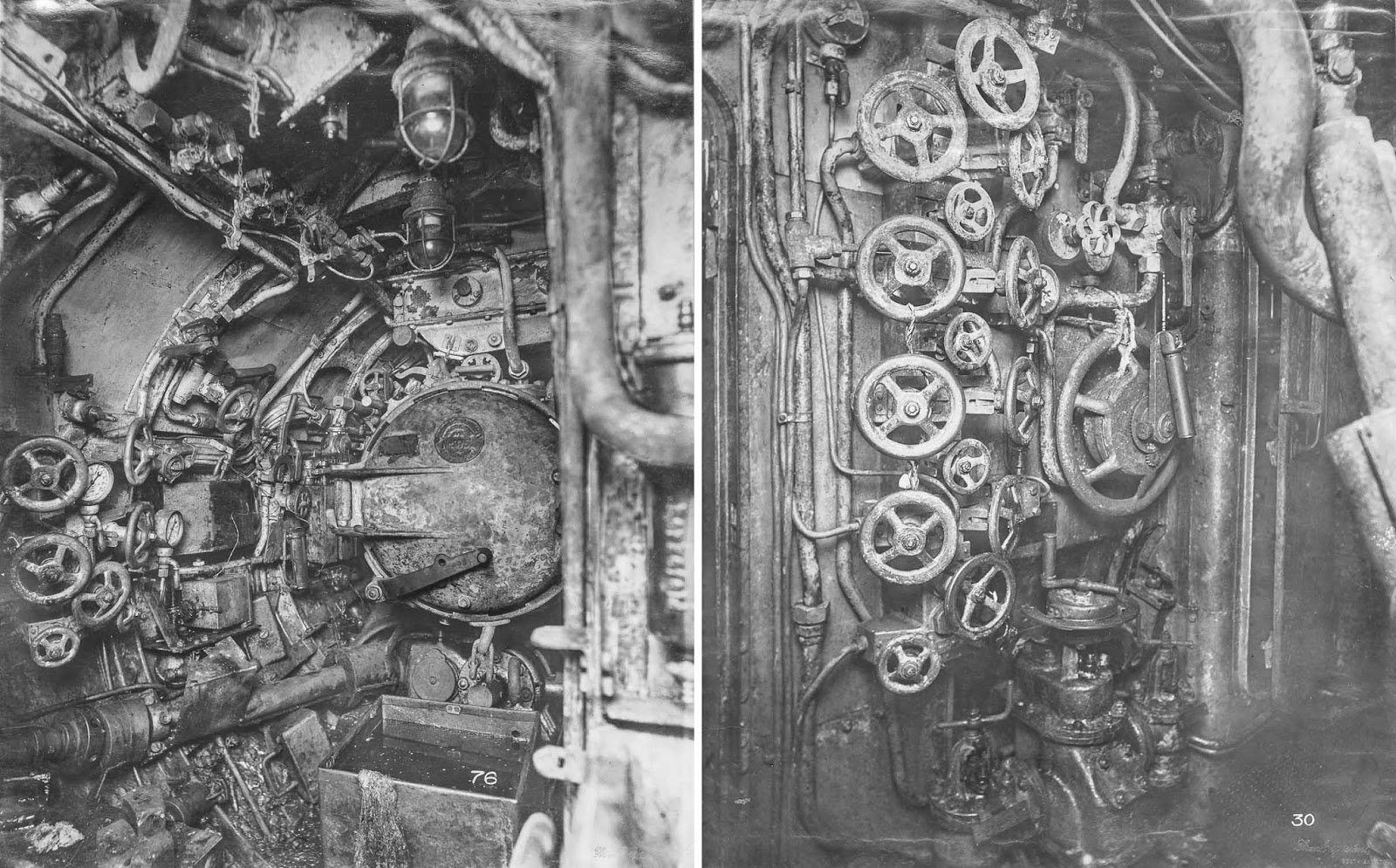 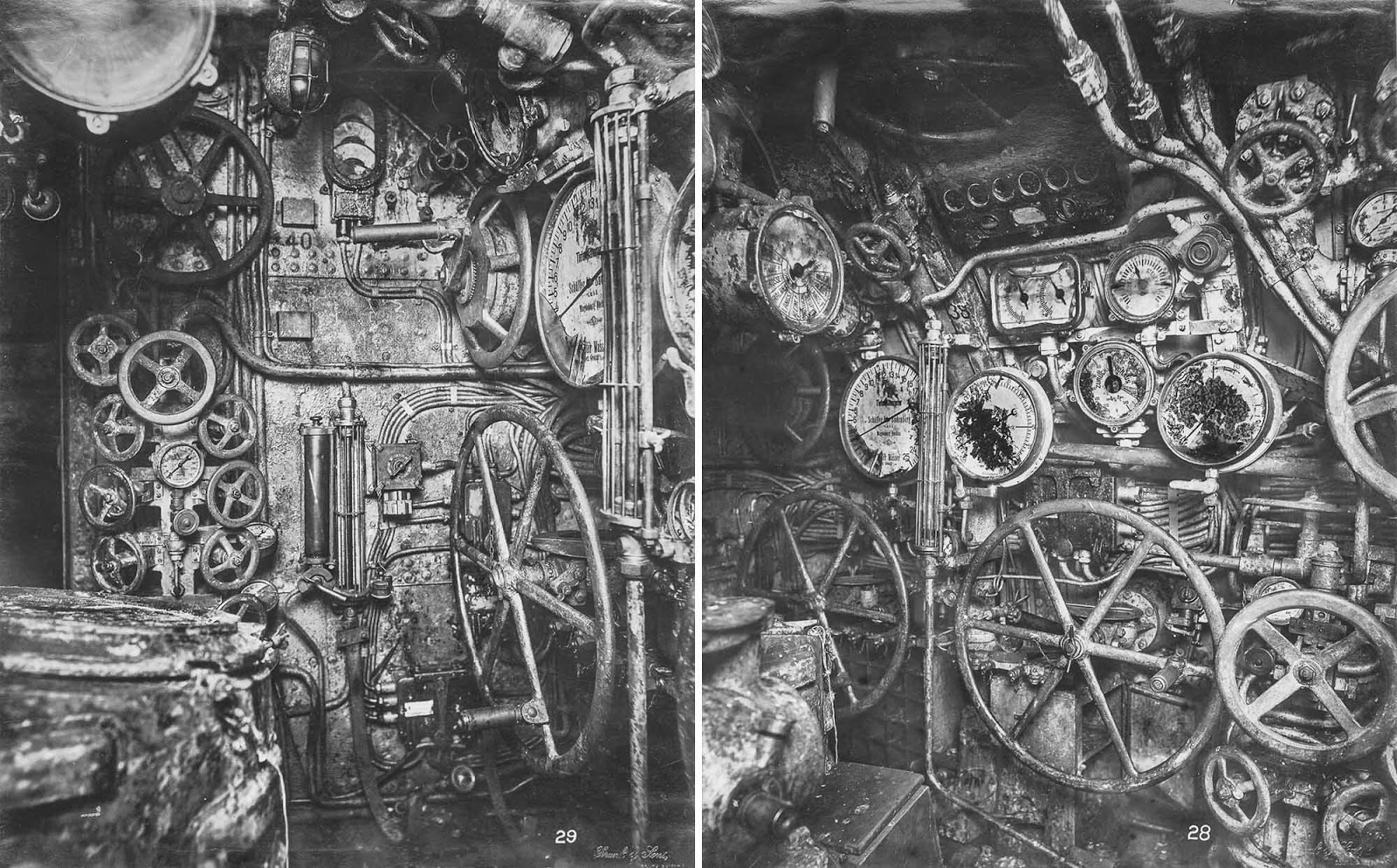 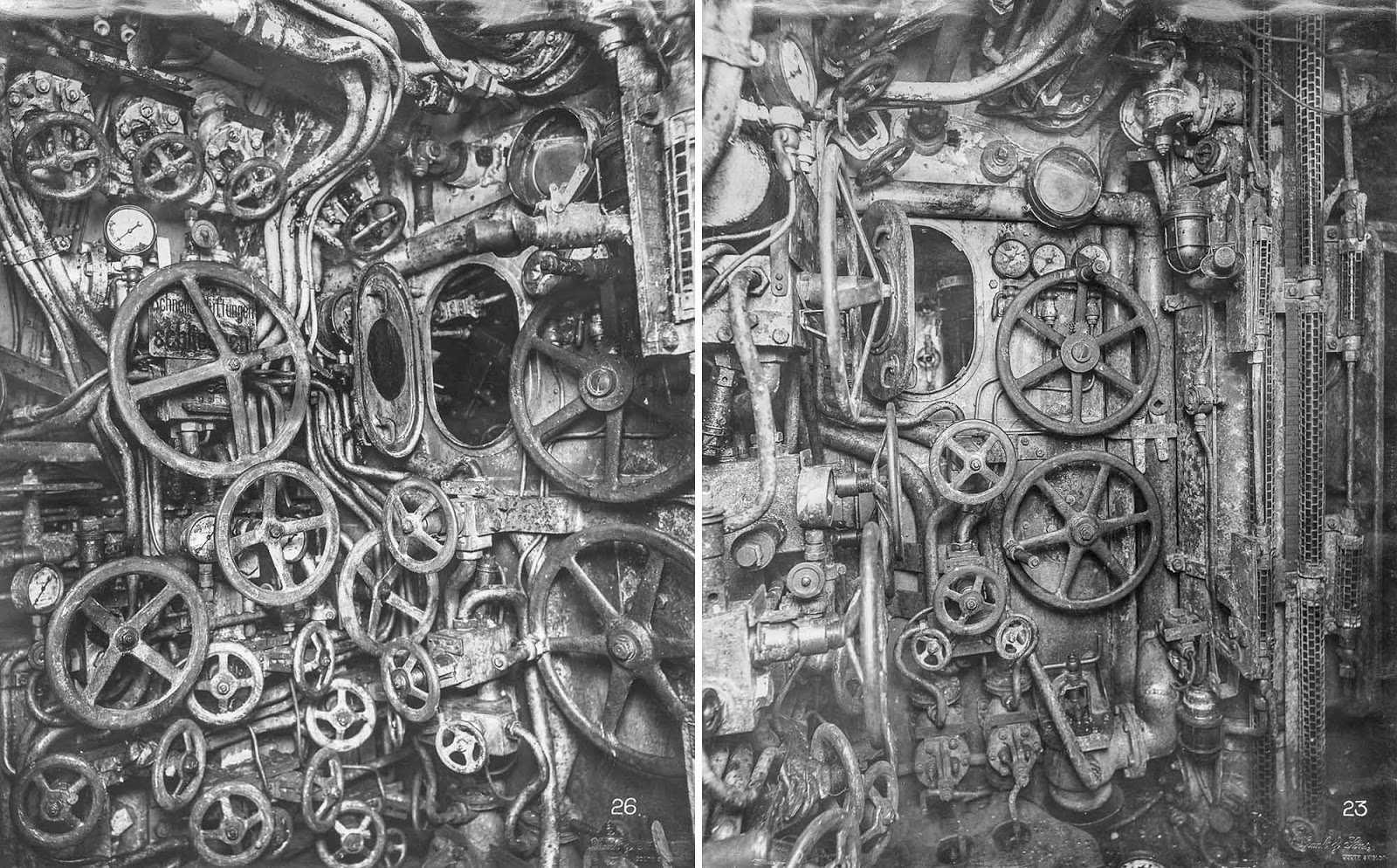