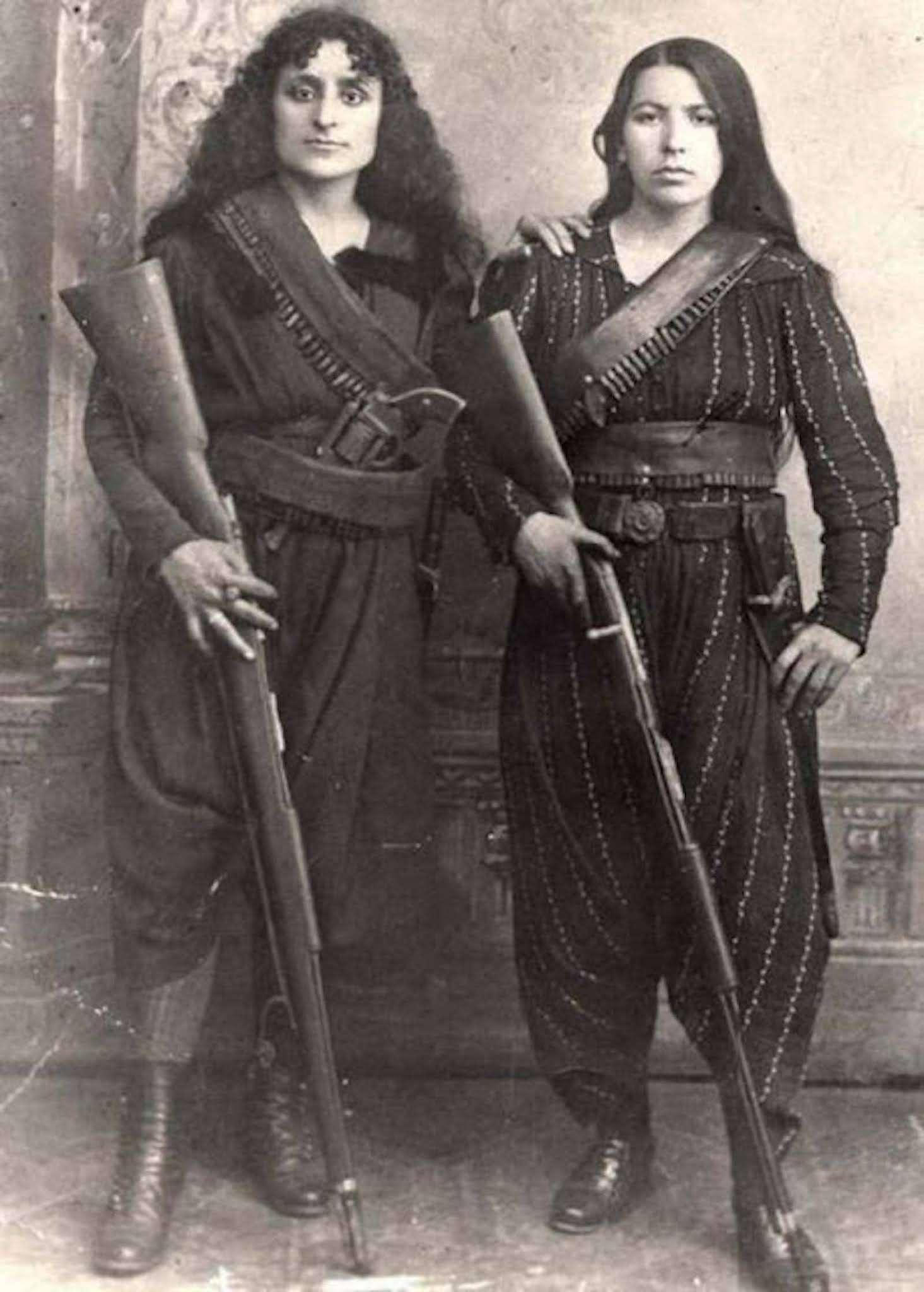 This picture is usually captioned as “Two Armenian women pose with their rifles before going to battle against the Ottomans, 1895.”

The story behind the famous picture of two Armenian women posing with their rifles is complicated and still mysterious. The picture was taken in 1895, during the Hamidians massacres where thousands of Armenians in the Ottoman Empire were assassinated.

The woman on left has been identified as Eghisapet Sultania, the other woman is still unidentified. It’s not confirmed whether they were real fighters or just dressing up for the photo. Actually, there’s a note on the back of the original image that says “souvenir”. Both women did survive and eventually made their way to the US. Unfortunately, there’s no other information about them.

The rifles that the women are carrying don’t match any mass-produced rifle, there is no swell for the chamber area, no definition to the bolt and cocking piece, the rear sight bases are lower than the handguards and there are no sights.

The revolver also seems to be fake, the proportions, especially the trigger guard, is off. It’s more likely that these were props made to show off in the photo booth.

However, fake rifles for a photobooth would not mean they are not guerrilla fighters, anything is possible in homemade weapons. Just seems more likely they would make a pair of fakes for photos and use real guns elsewhere. 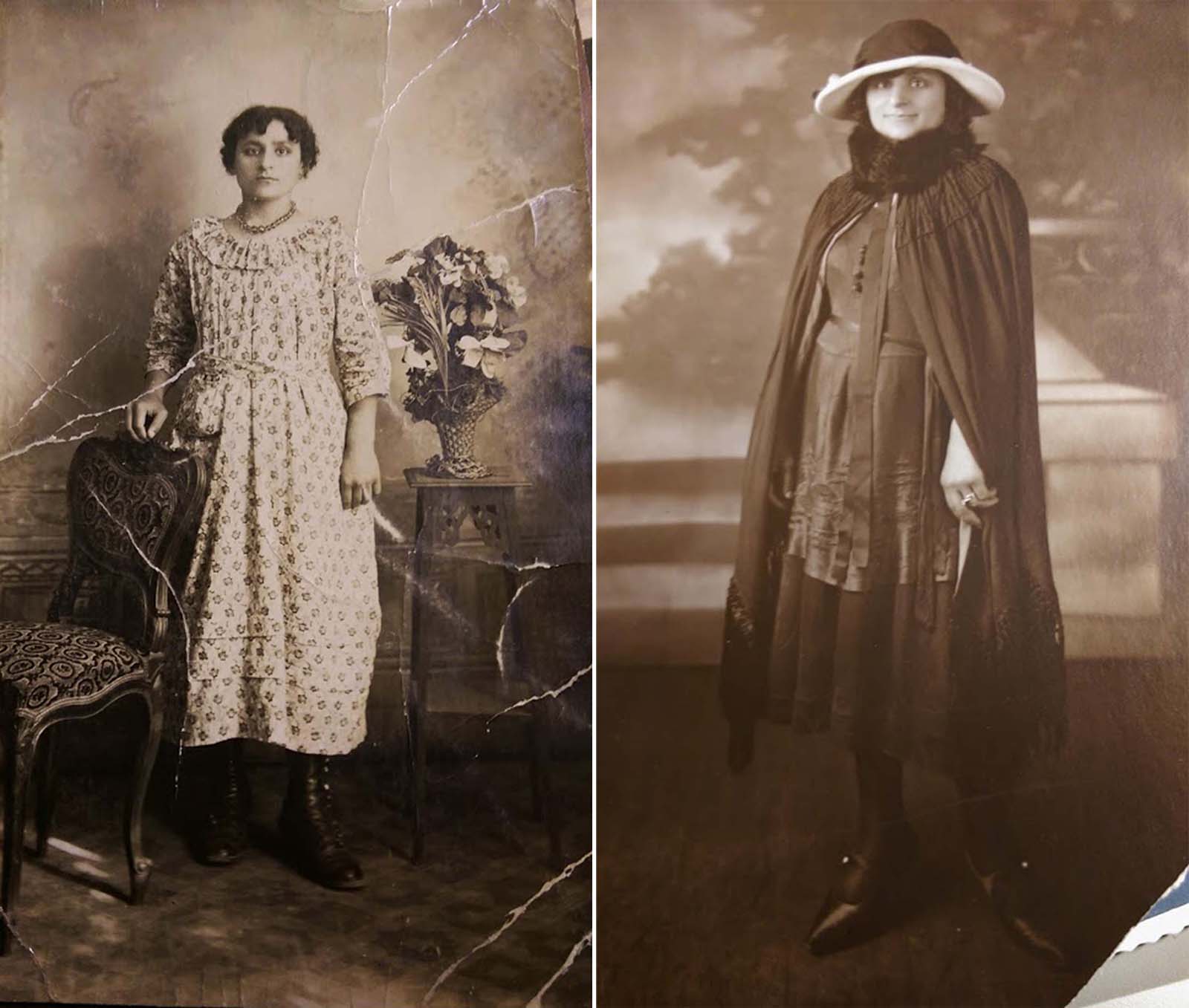 There is a long history of Armenian women as defenders of their communities, particularly during the Hamidians Massacres and Armenian Genocide when Ottoman authorities conscripted Armenian men to almost certain death, and women and children were left to fend for themselves.

These guerrilla fighters were called Fedayi, a term derived from the Arabic word fedayeen that literally means “those who sacrifice”. It perfectly describes the civilian men and women who voluntarily left their families and lives behind to form self-defense units in response to the pillage and murder of Armenians at the hands of Ottoman forces.

The fedayees were the true backbone of the Armenian nation as they numbered in the thousands and led the national movement. They were instrumental throughout the Hamidian Massacres (1894-1896), Sasun Resistance (1894), Zeitun Rebellion (1895–1896) and the Defense of Van and Khanasor Expedition (1897) as well as the battalions that they fought and won that resulted in an independent Armenia in 1918.

The massacres began in the Ottoman interior in 1894, before becoming more widespread in the following years. Between 1894 and 1896 was when the majority of the murders took place. The massacres began tapering off in 1897, following the international condemnation of Abdul Hamid. It was estimated casualties ranged from 80,000 to 300,000 resulting in 50,000 orphaned children.

News of the Armenian massacres in the empire were widely reported in Europe and the United States and drew strong responses from foreign governments, humanitarian organizations, and the press alike.

One headline in a September 1895 article by The New York Times ran “Armenian Holocaust,” while the Catholic World declared, “Not all the perfume of Arabia can wash the hand of Turkey clean enough to be suffered any longer to hold the reins of power over one inch of Christian territory.”

Despite the great public sympathy that was felt for the Armenians in Europe, none of the European powers took concrete action to alleviate the Armenians’ plight.