In the early years of the 20th century, a number of circuses toured Northern Ireland providing entertainment, tricks, and a lot of excitement for the crowds.

Though the dim lighting condition inside the circus’ tent prevented images from being made of the acts in progress, local photographer Herbert Cooper was able to take pictures of the clowns, acrobats, and animals outdoors, as they rehearsed their acts and mingled with the local people.

During this time, he documented various circus shows that arrived in Strabane, a town in Northern Ireland, the three main ones being Duffy’s Circus, Buff Bill’s American Circus, and Hanneford’s Canadian Circus.

His pictures capture scenes from the parade in Abercorn Square, Strabane, from a wall of death act (using a car), and of the animals of the circus, including lions and a sign for ‘bears that talk’.

A clown with the Grand Circus.

Although circus arts are ancient and transnational in origin, the modern circus was born in England during the 1770s when Philip Astley, a cavalryman, and veteran of the Seven Years War, brought circus elements—acrobatics, riding, and clowning—together in a ring at his riding school near Westminster Bridge in London.

The circus concept was drastically altered when it arrived in the United States, it imitated everything the circus’ in England consisted of, but new performances were added.

Once its arrival in the 1800s the first to introduce the idea of family entertainment through the art of a circus performance was Victor Pepin.

Later other showmen showcased a different approach, they started to use other trained exotic animals besides horses to entertain a big crowd of spectators and it became a prosperous industry in which everyone wanted a piece. 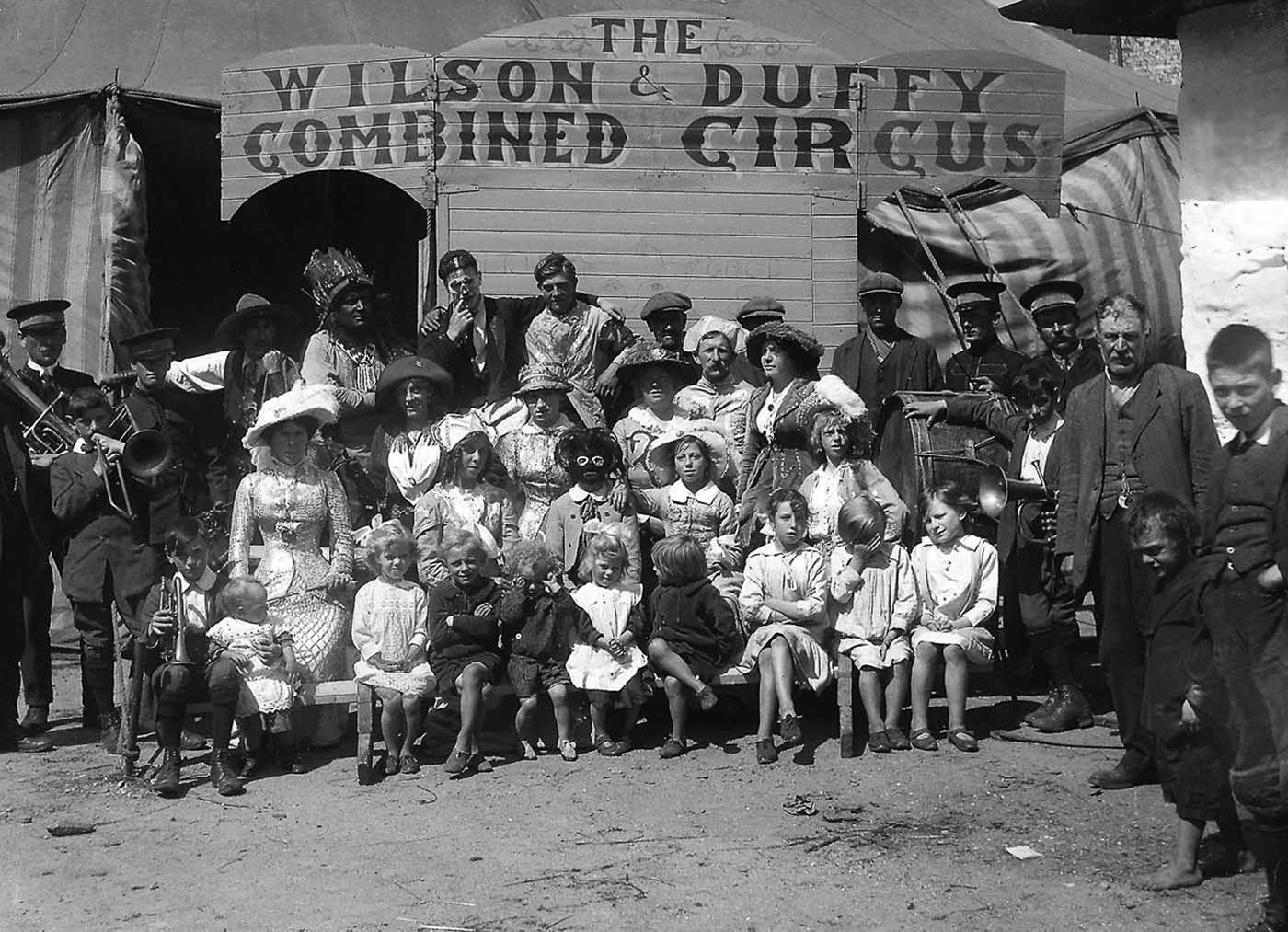 The members of the Wilson & Duffy Combined Circus.

The first traveling circus was created in America, by the P.T. Barnum Circus who partnered up with William Cameron Coup and Dan Catello in order to be the first circus to travel the world by train and set up canvas tents at night to exhibit the show.

Later in the 1900s The Ringling brothers, P.T. Barnum, and Bailey’s biggest competition bought them off and the circus was renamed Ringling Brothers, Barnum and Bailey circus.

The act of involving exotic animals and people with natural deformities or talent inspired circus members from all over the world including Europe, it was a revolutionary concept.

Pretty soon showmen from Europe started to imitate the American form of a circus act. Sales decreased dramatically once reaching the 20th century due to an increase in animal rights awareness. 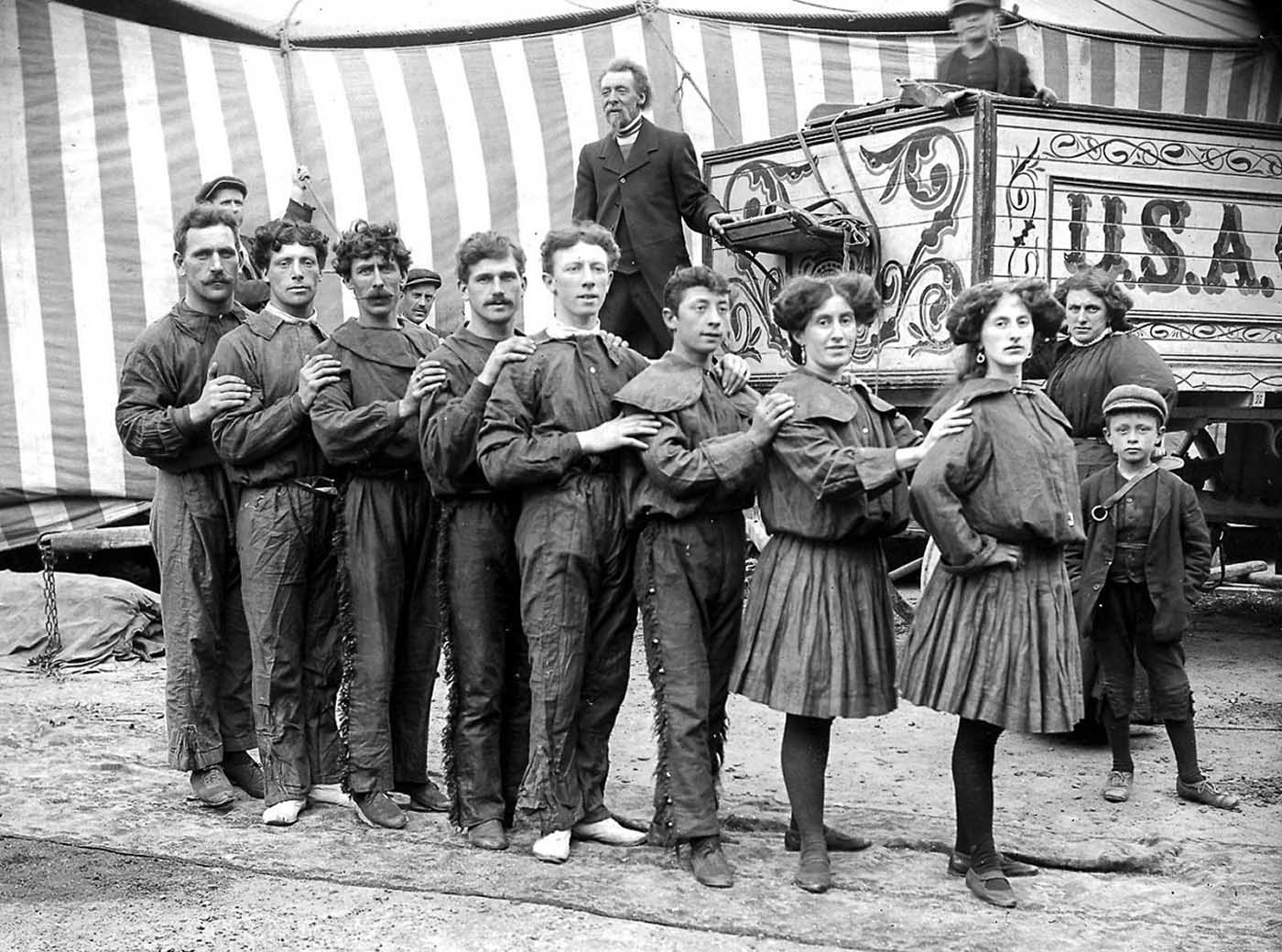 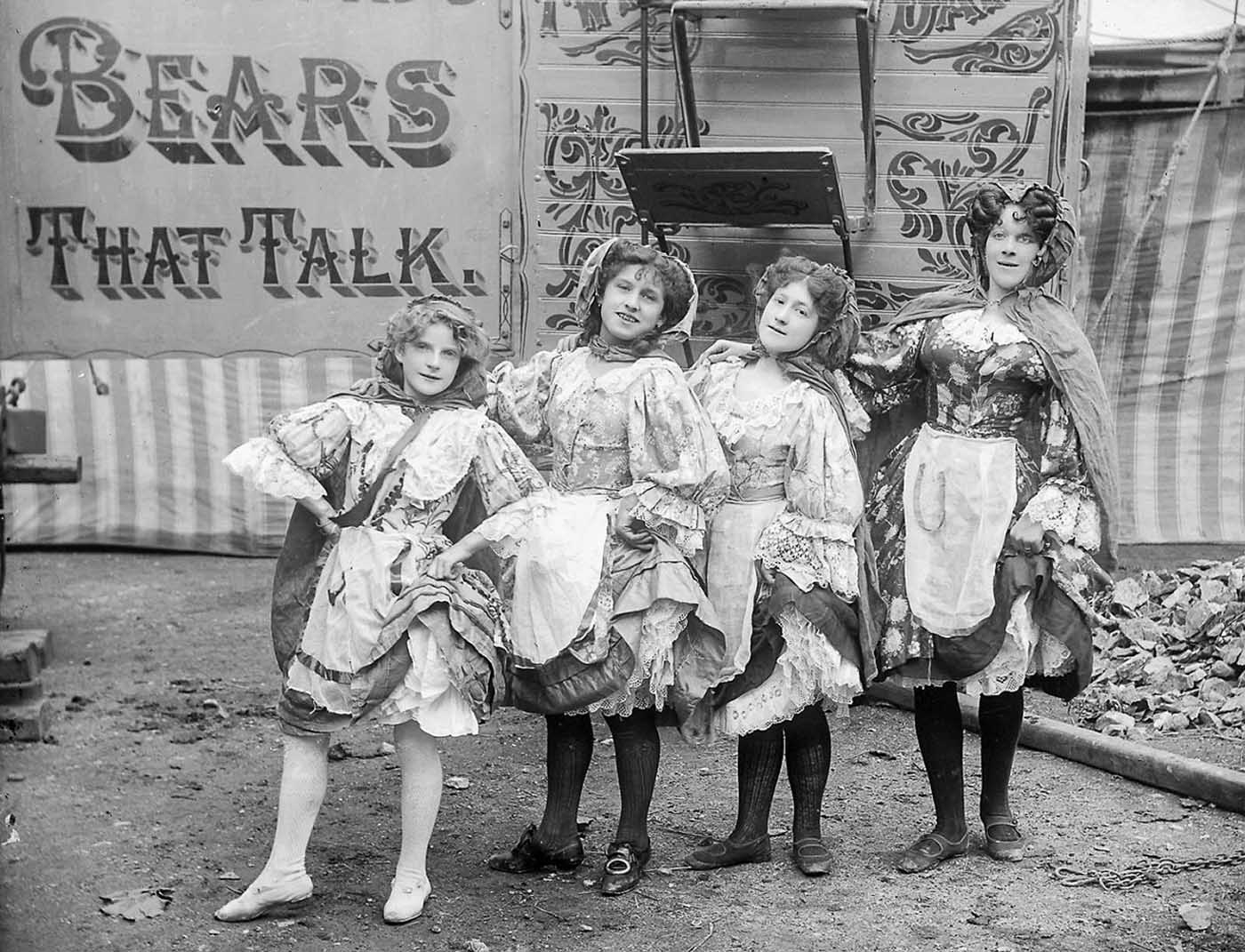 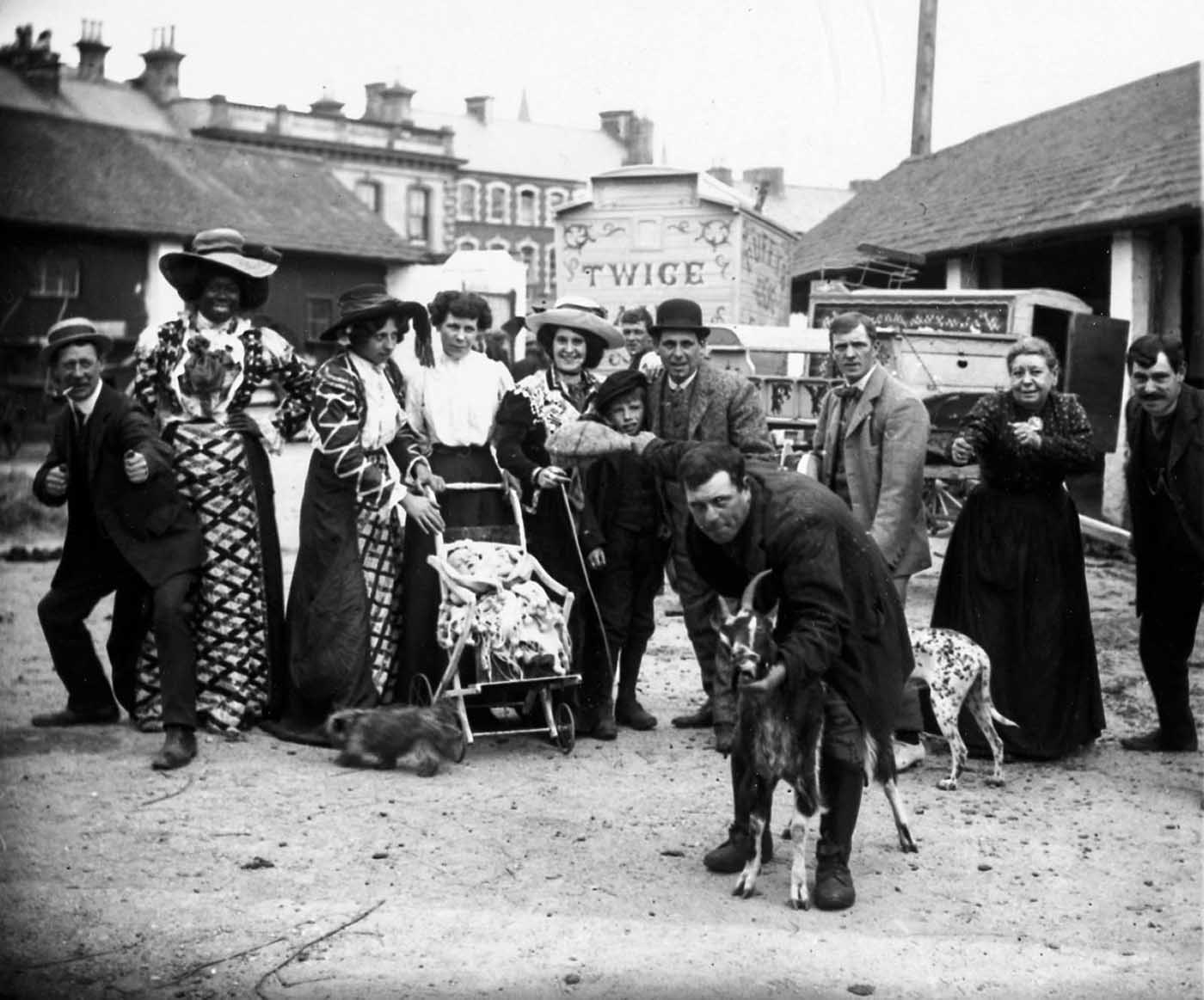 A clown with Scott’s Circus. 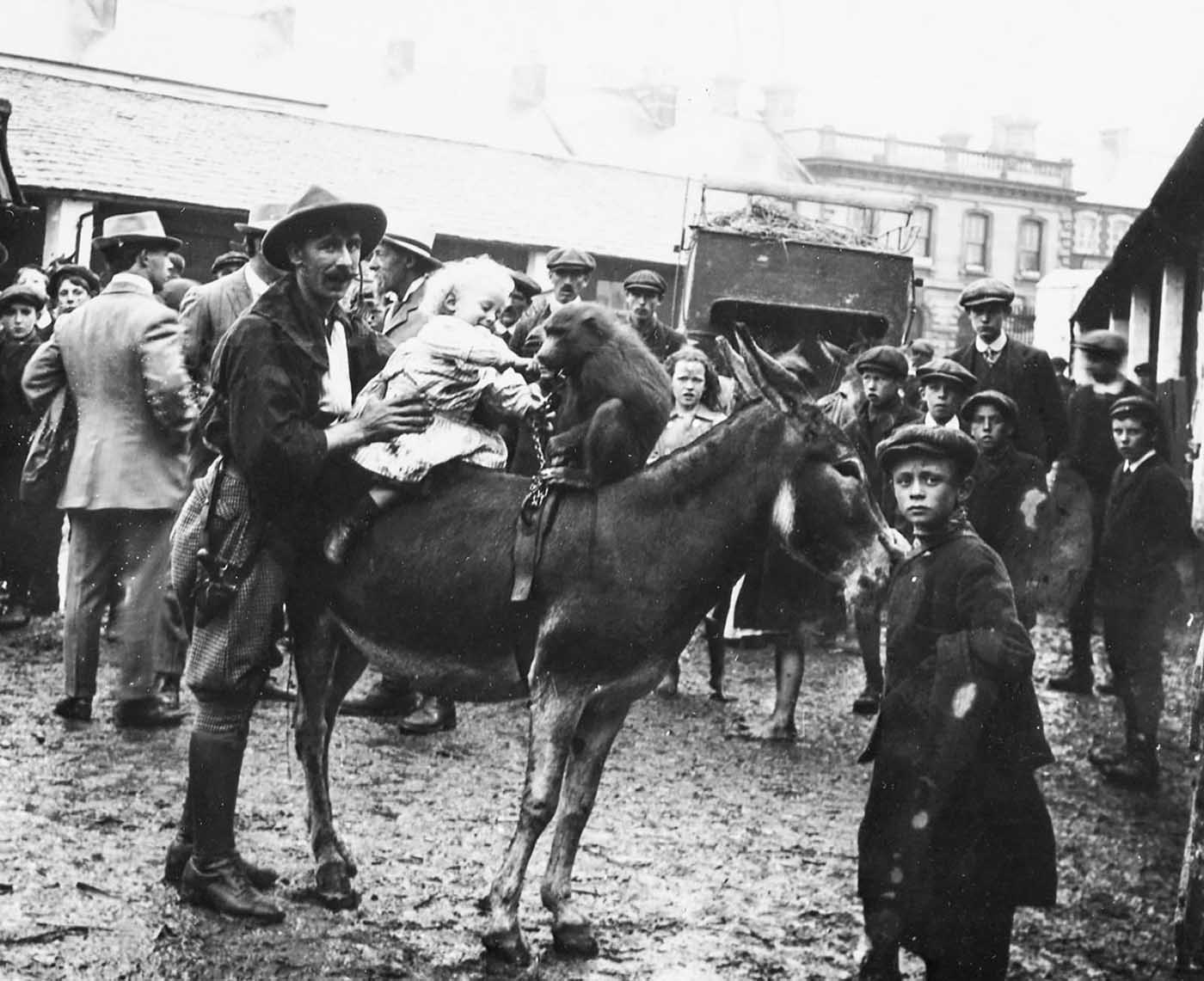 An animal wrangler with Buff Bill’s Circus introduces a child to a baboon.

Lady on a horse, with a clown watching.

Clown on a horse, with a lady watching. 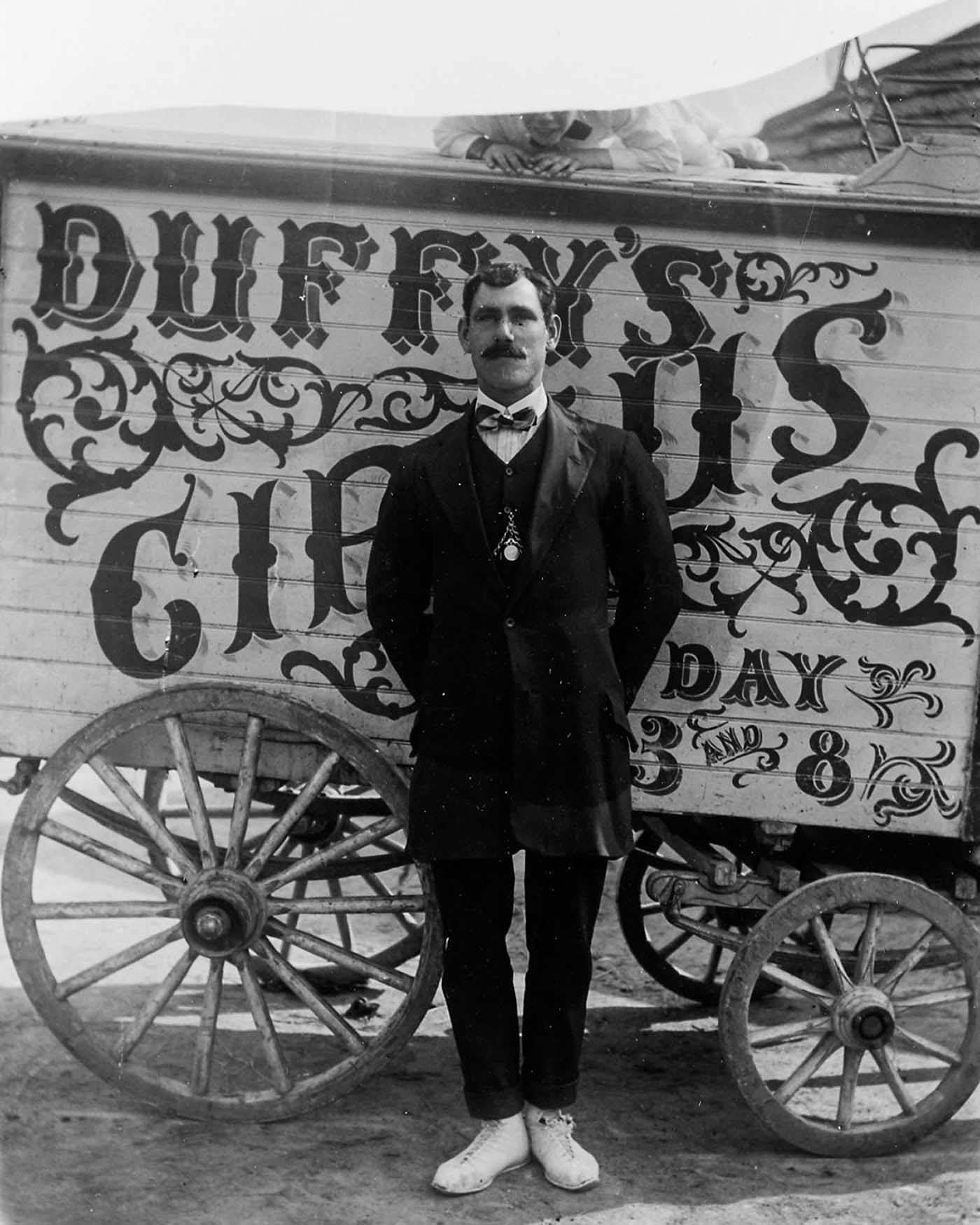 A child photobombs a man from Duffy’s Circus. 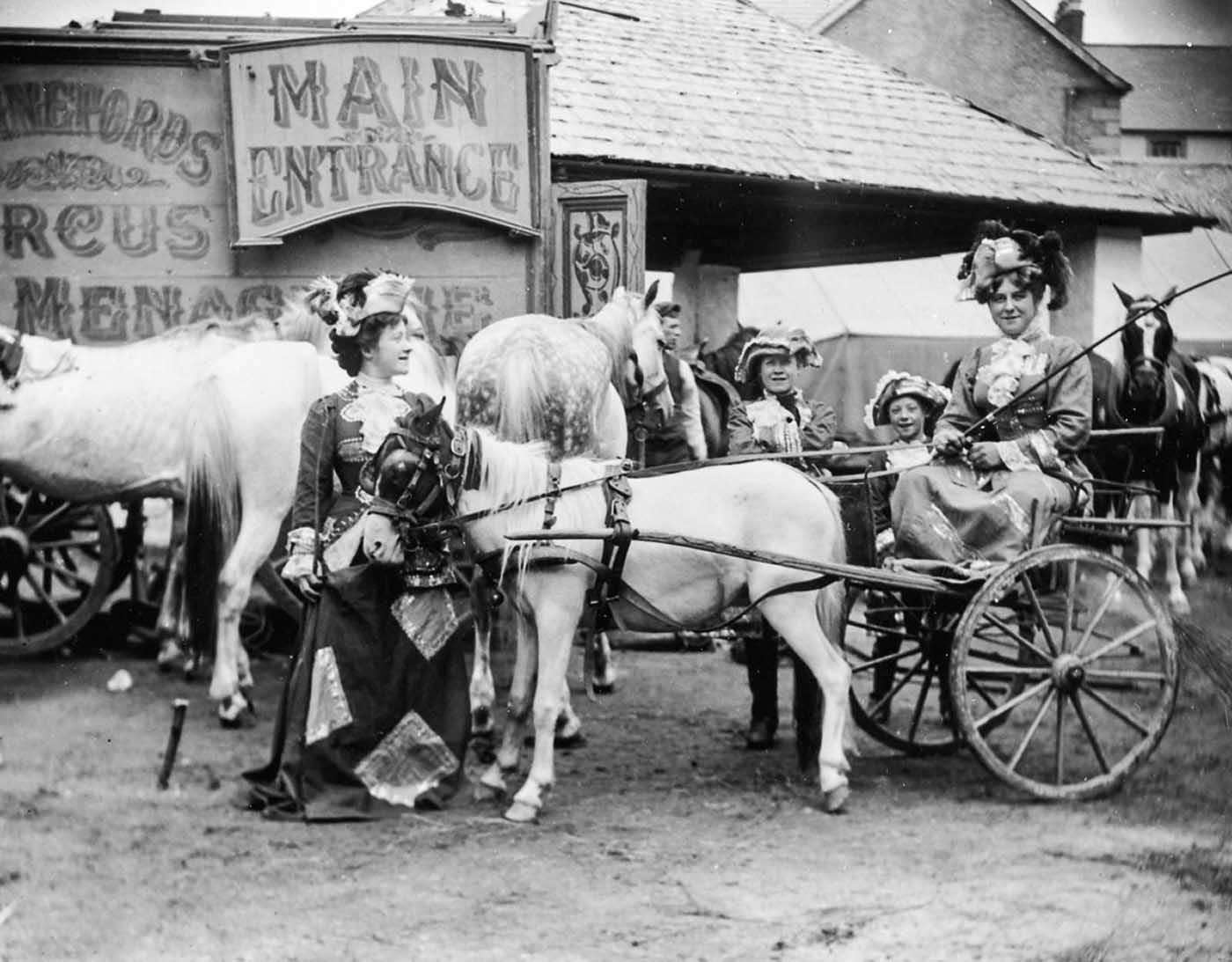 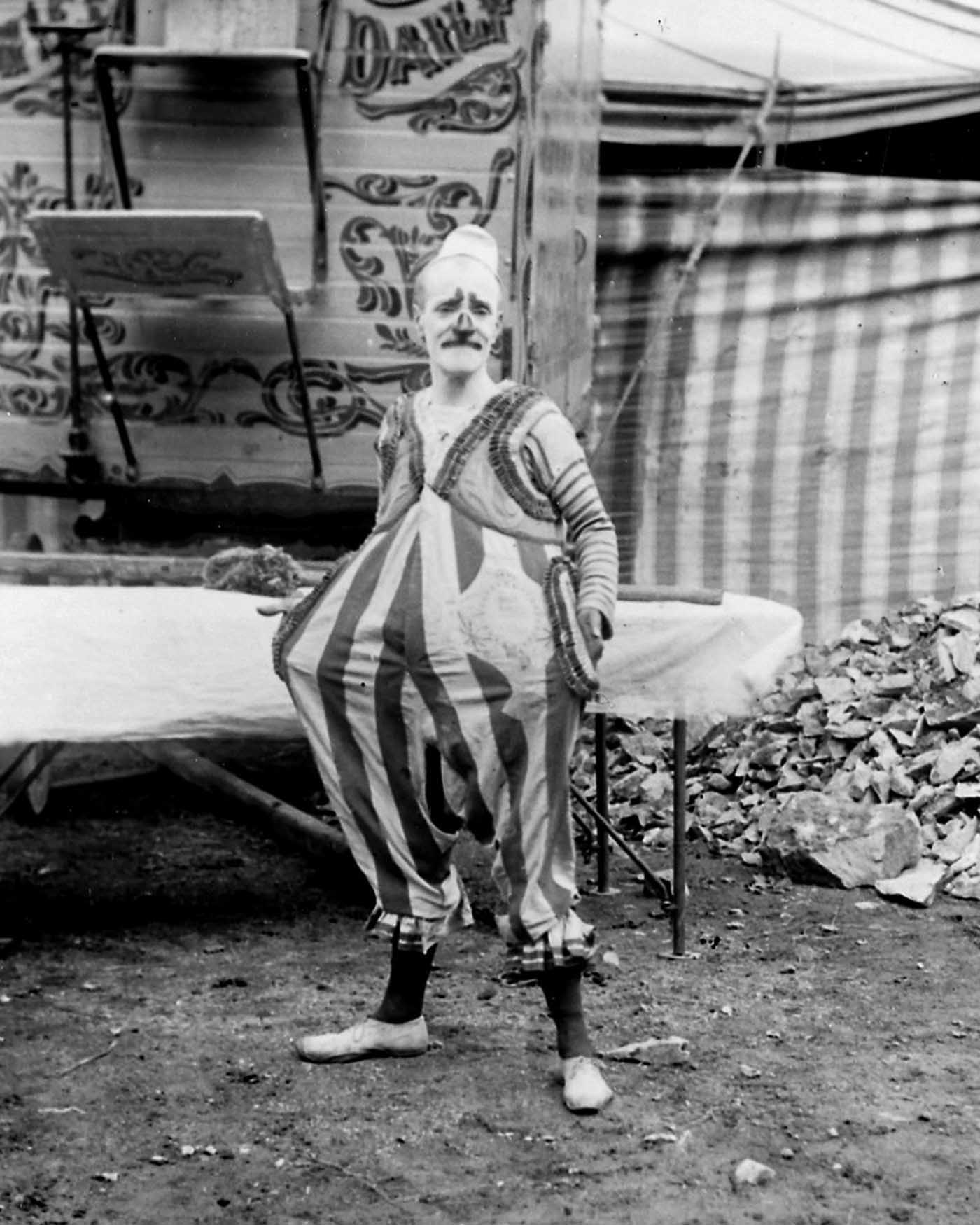 A clown with Hanneford’s Canadian Circus. 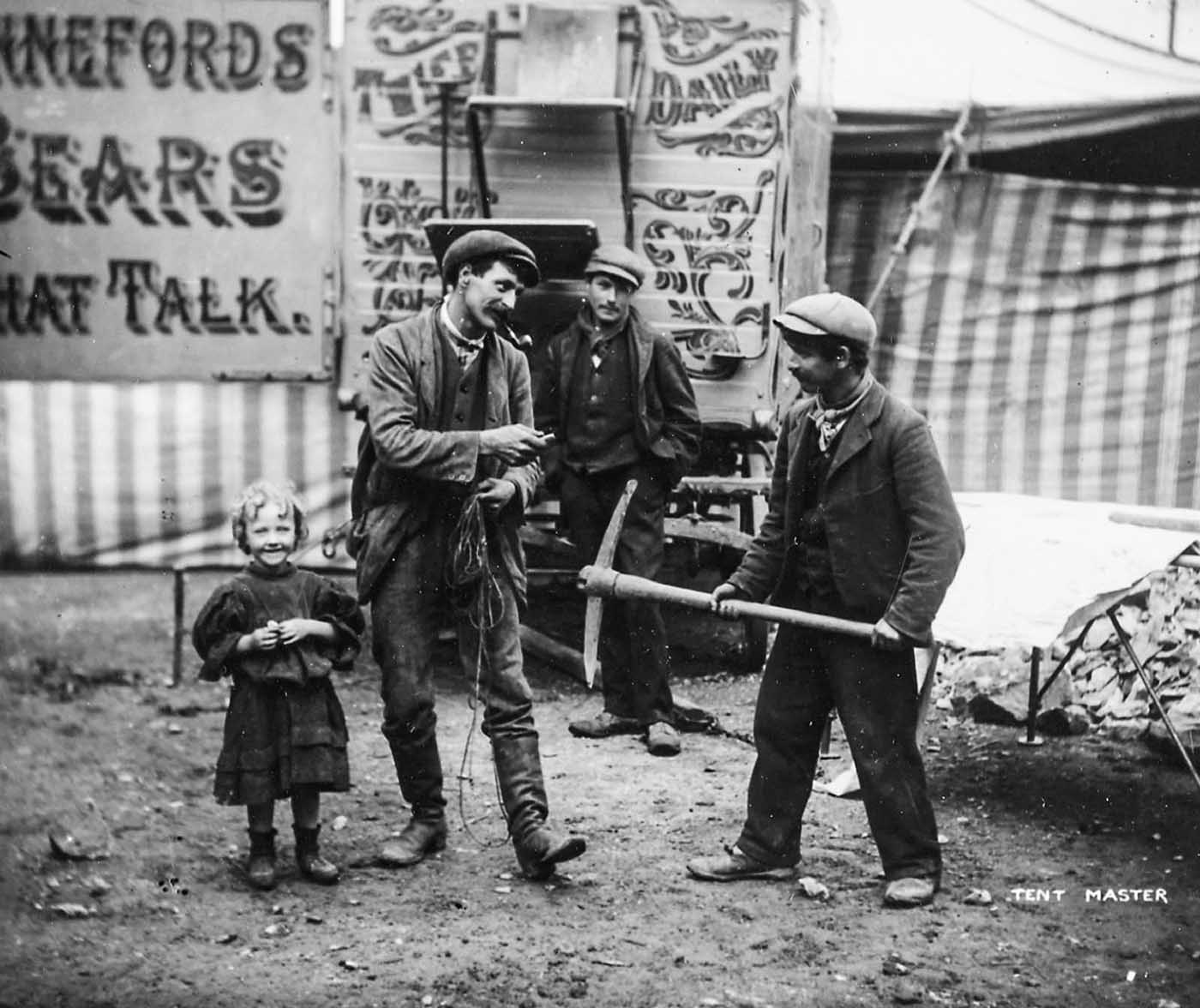 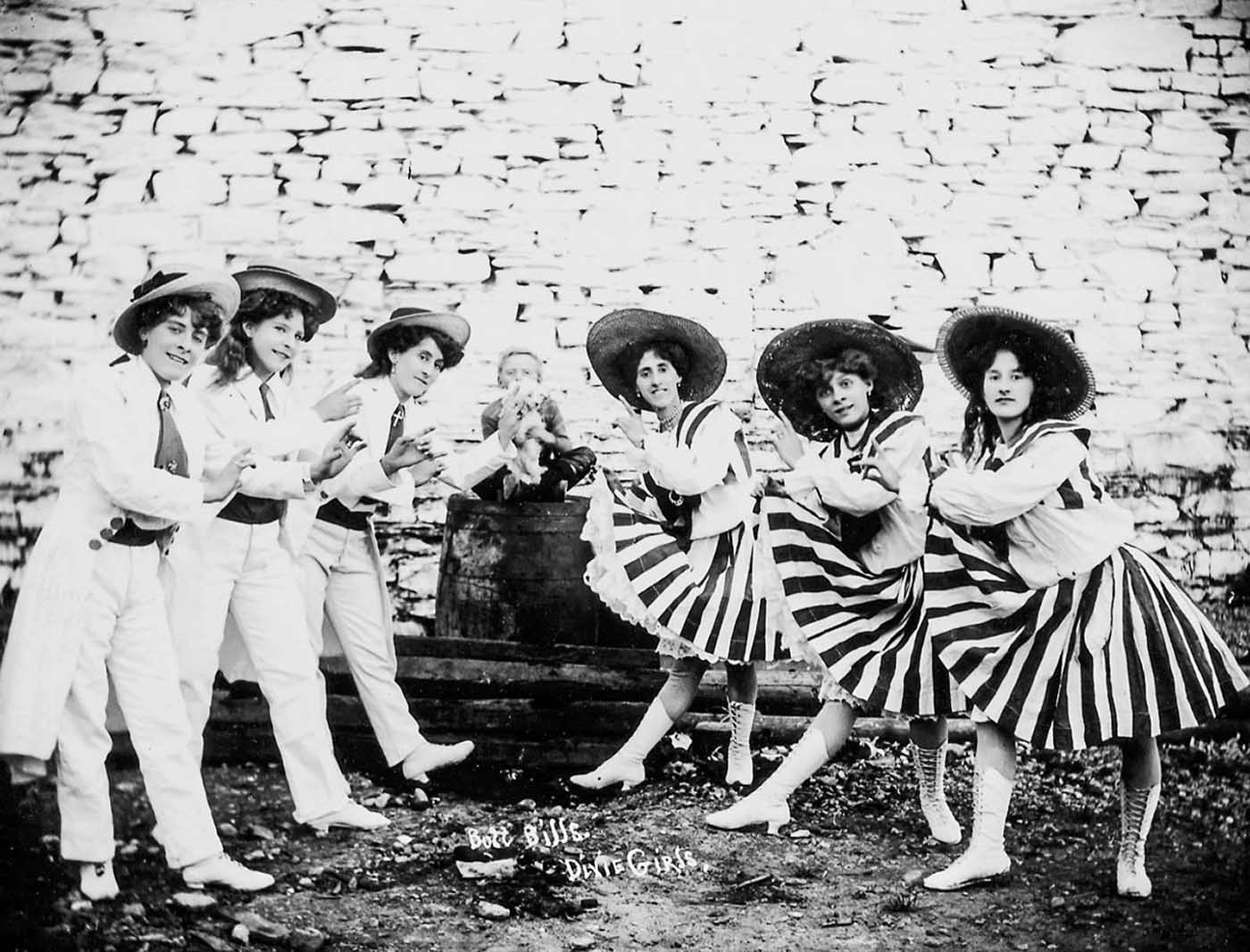 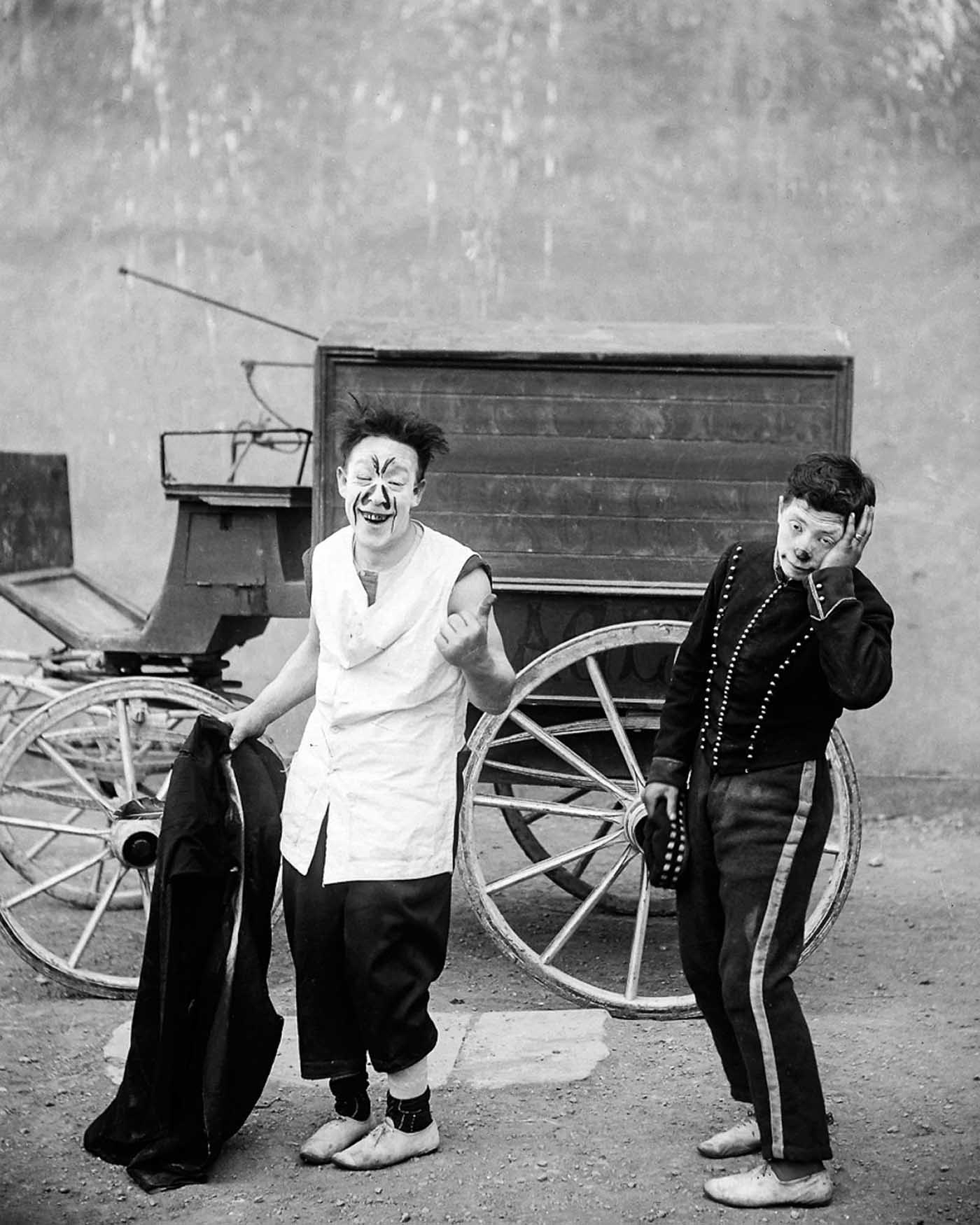 Two clowns in front of a wagon.

Two clowns in front of a wagon. 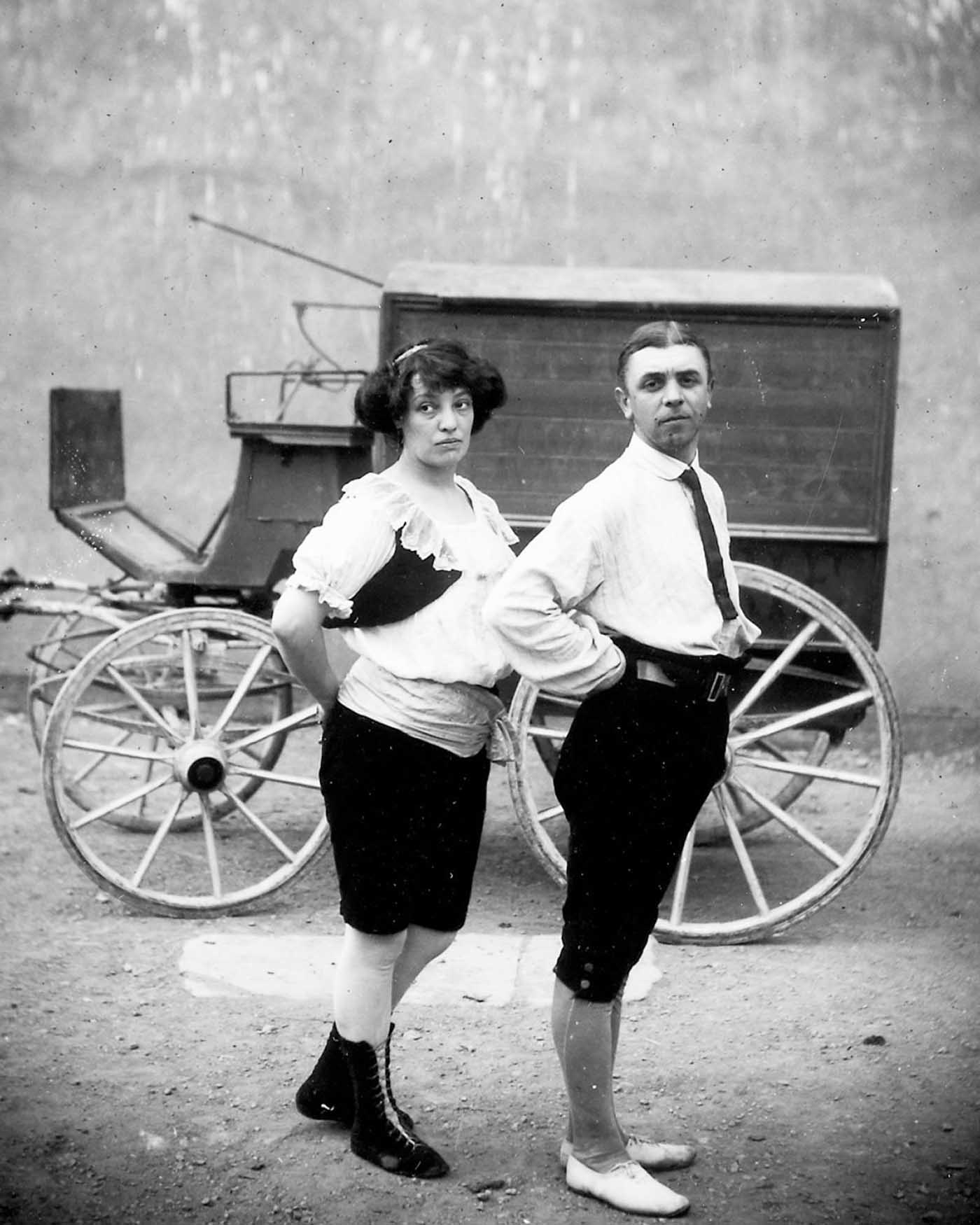 Circus performers pose in front of a wagon. 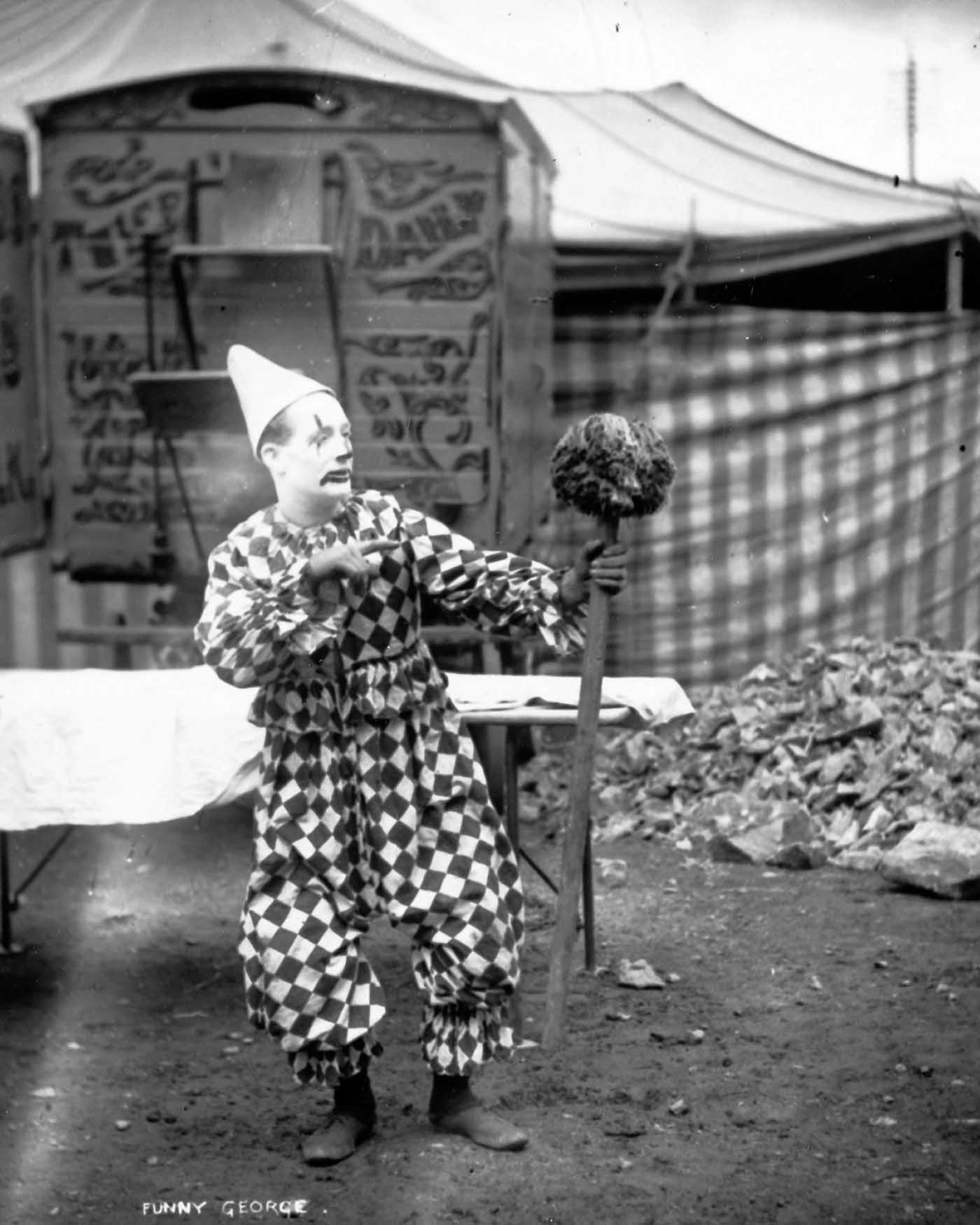 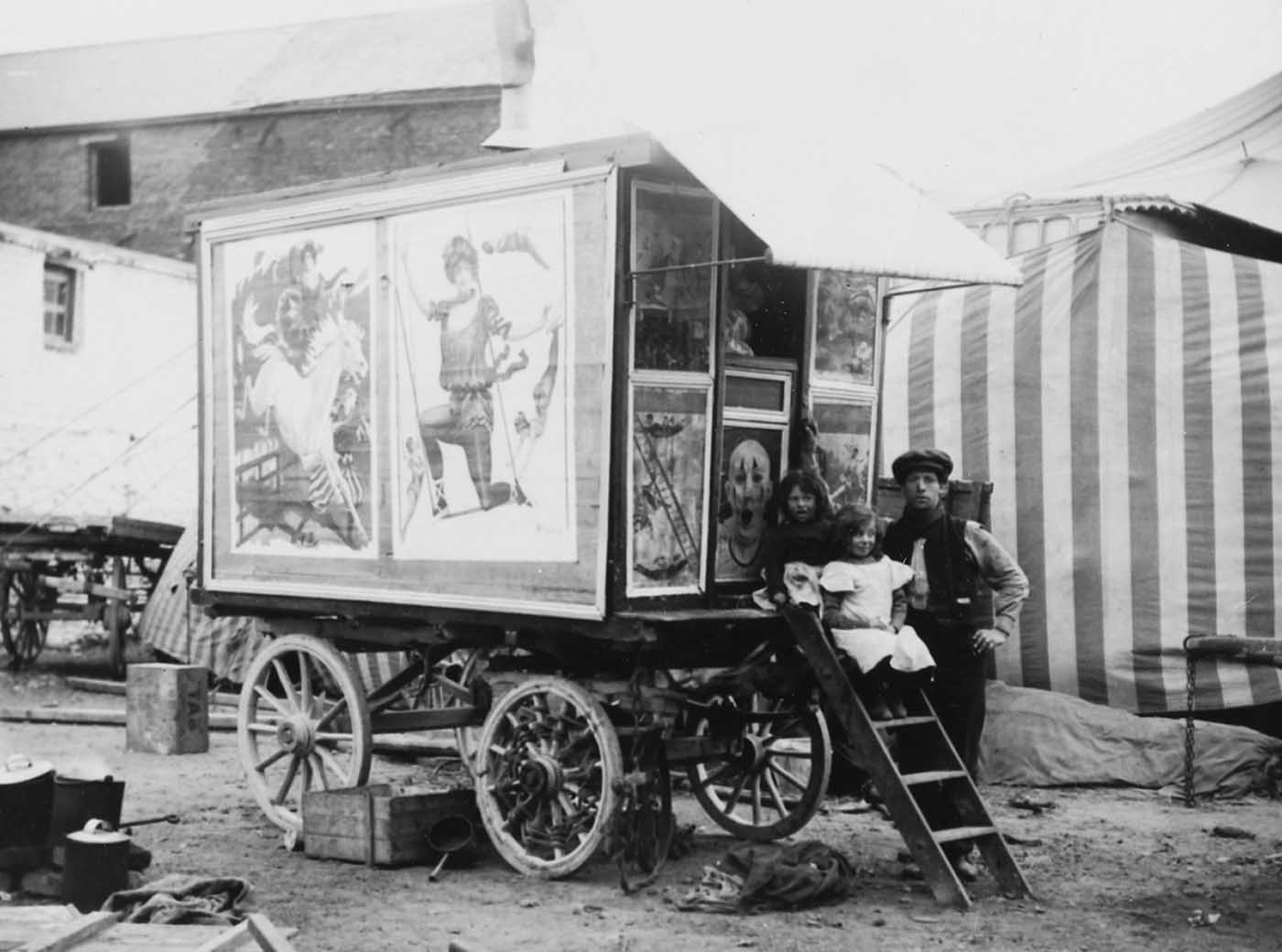 Buff Bill’s Circus, two children and a man sitting on the steps of a caravan. 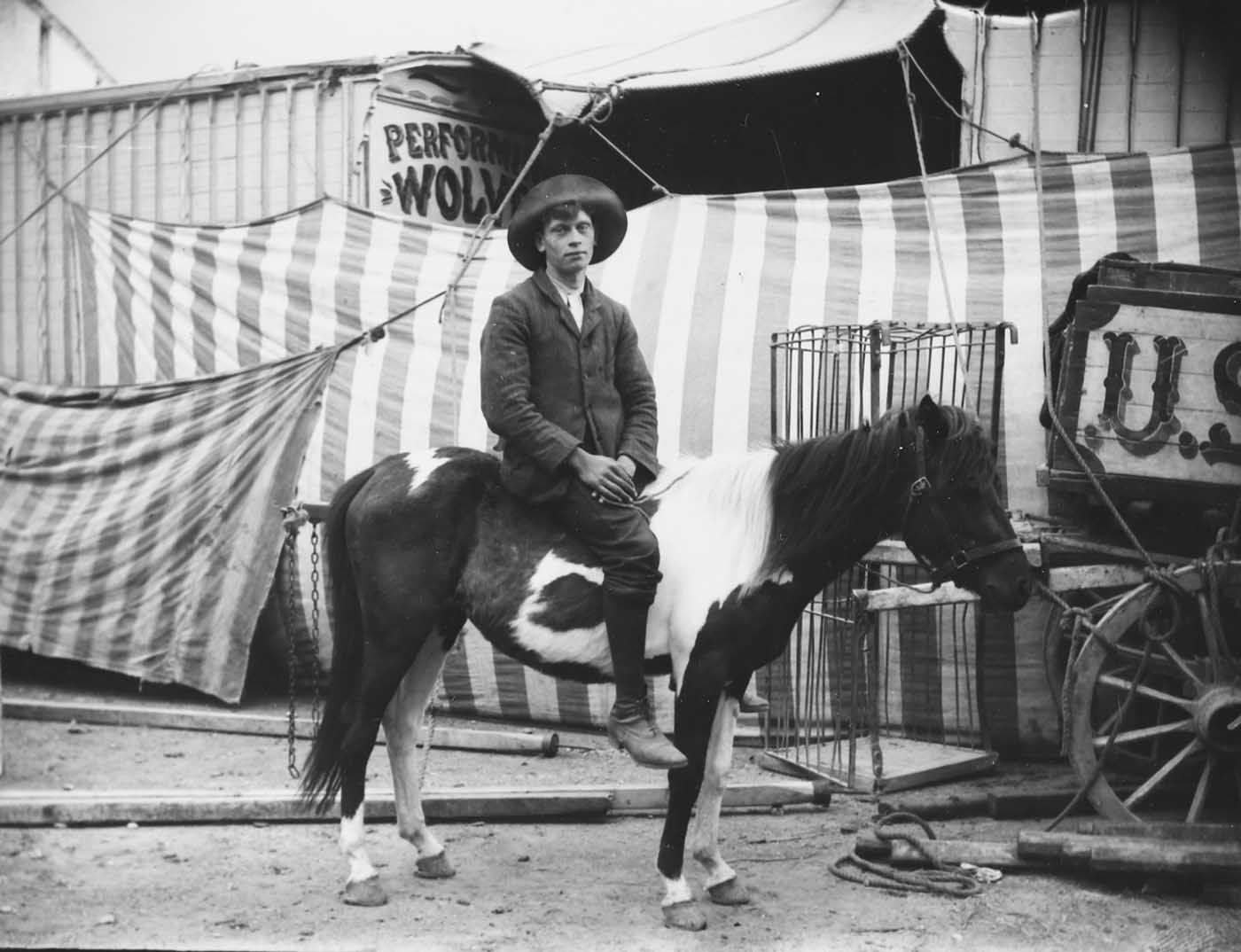 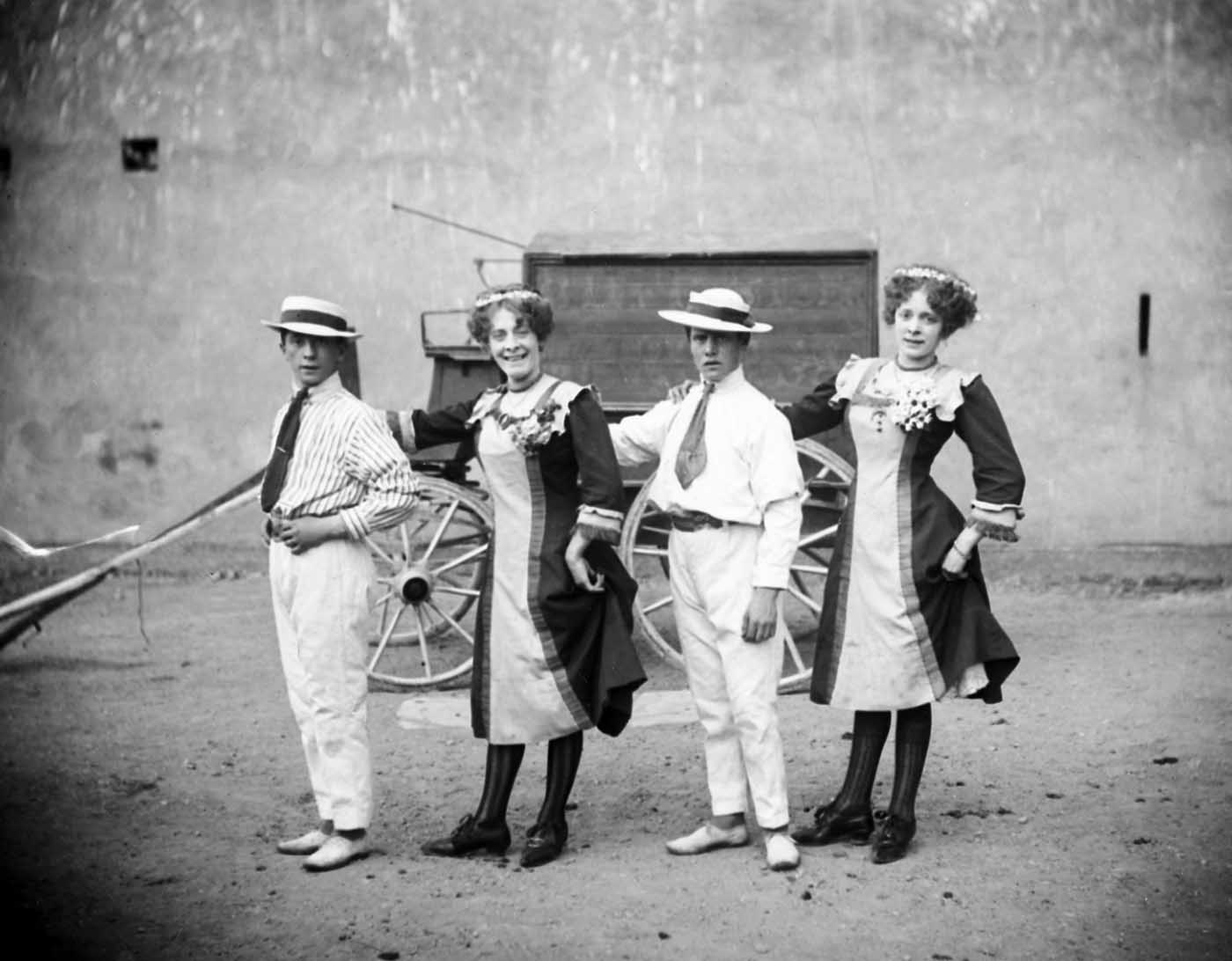