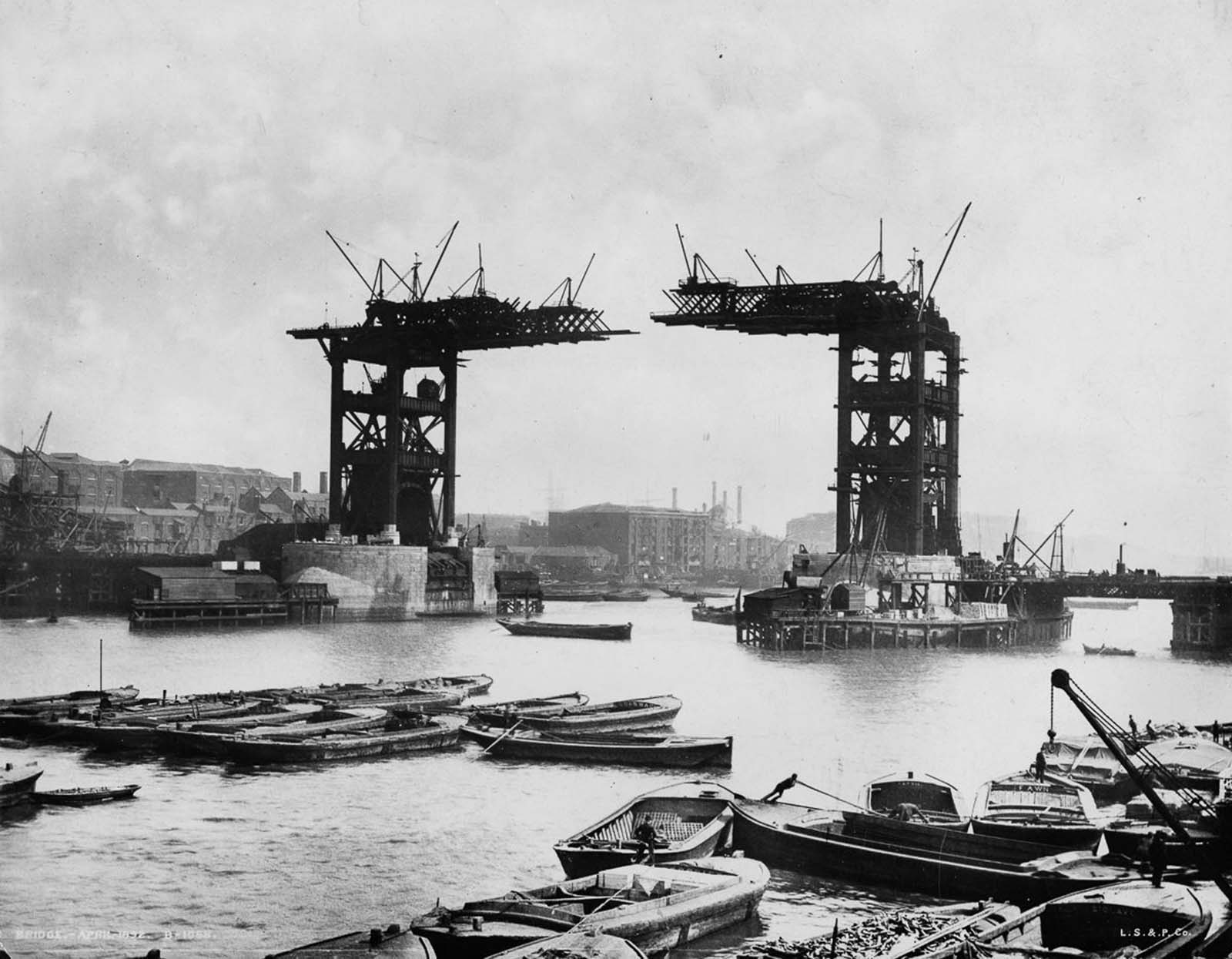 Arguably one of the best-known and most recognizable bridges in the world, Tower Bridge was built in the late nineteenth century and immediately acclaimed as a feat of Victorian engineering.

Designed to ease road traffic while maintaining river access, it was constructed with giant moveable roadways that lift up for passing ships. Opened on 30 June 1894, the bridge quickly became known as the ‘Wonder Bridge’.

A special committee was formed in 1876 to come up with ways to address the problem of traffic which was getting bogged down. One of the ideas was for a new bridge, and several architects submitted dozens of designs, but the project was delayed for eight long years.

The special committee was unable to agree on a singular vision until the City Architect, Sir Horace Jones submitted a design that was deemed appropriate. Together with the help of another architect by the name of John Wolfe Barry they conceptualized Tower Bridge in the form we know today.

An Act of Parliament authorizing construction was passed in 1885. It specified the opening span must give a clear width of 200 feet (61 m) and a headroom of 135 feet (41 m), and construction had to be in a Gothic style. 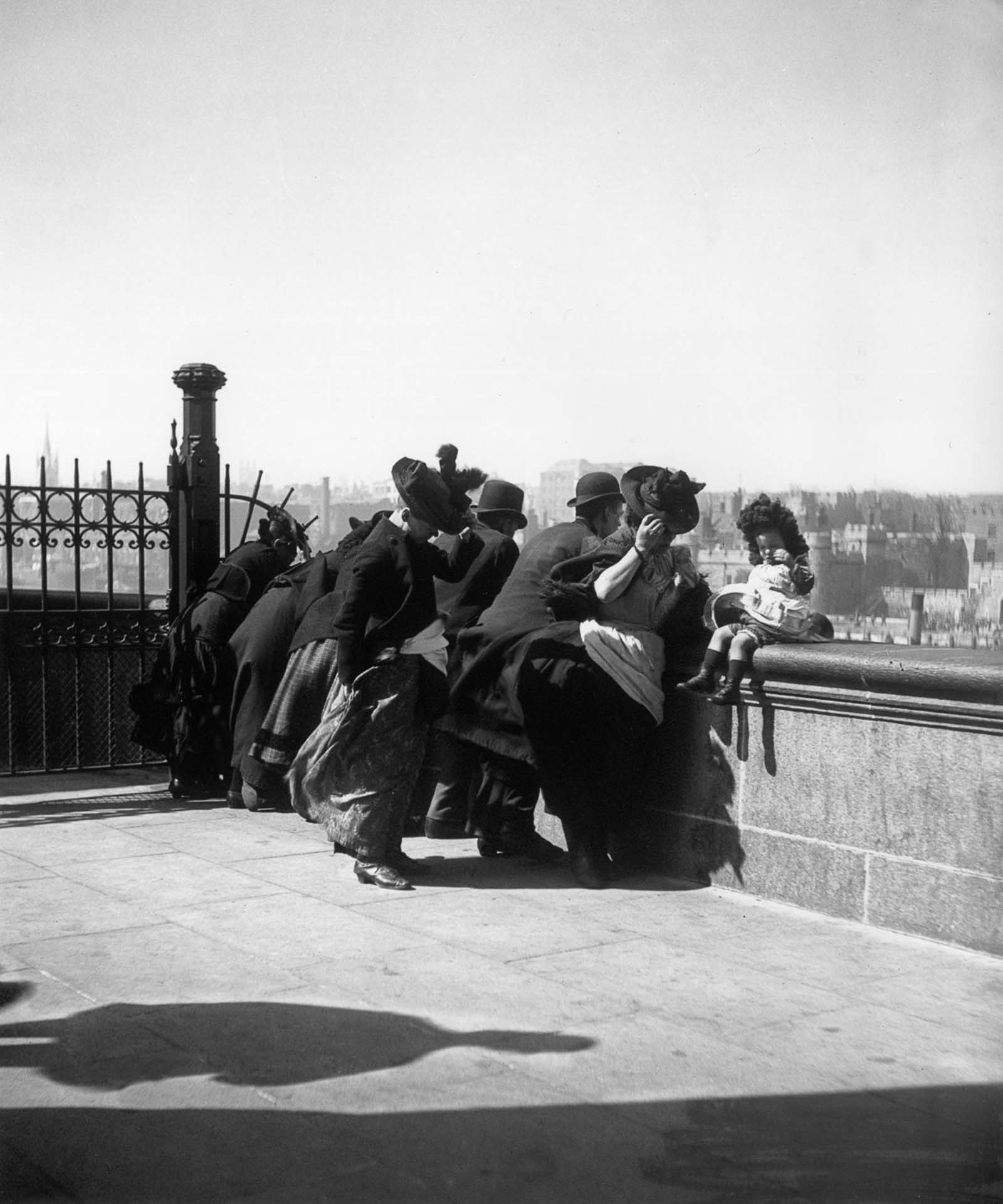 A group of sightseers hold onto their hats on a windy corner of Tower Bridge. 1895.

Construction was funded by the Bridge House Estates, a charity established in 1282 for maintenance of London Bridge that subsequently expanded to cover Tower Bridge, Blackfriars Bridge, Southwark Bridge, and the Millennium Bridge.

The architects designed a bridge with two bridge towers built on piers. The central span was split into two equal bascules or leaves, which could be raised to allow river traffic to pass. The two side spans were suspension bridges, with rods anchored both at the abutments and through rods contained in the bridge’s upper walkways.

Two piers, containing over 70,000 long tons (78,400 short tons; 71,123 t) of concrete, were sunk into the riverbed to support the construction. More than 11,000 long tons (12,320 short tons; 11,177 t) of steel were used in the framework for the towers and walkways, which were then clad in Cornish granite and Portland stone to protect the underlying steelwork and to make the structure more pleasing. 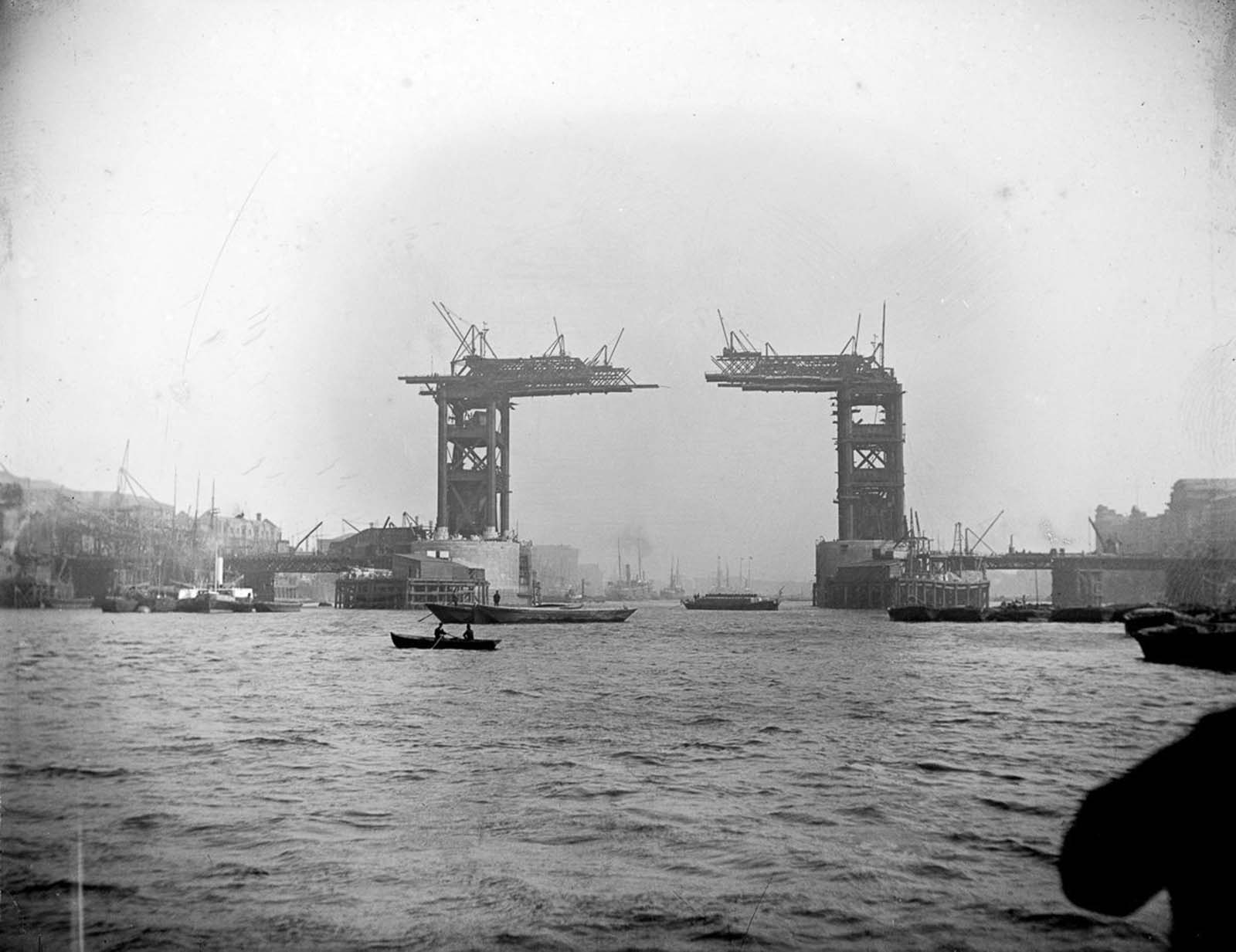 Tower Bridge was officially opened on 30 June 1894 by the Prince and Princess of Wales. An Act of Parliament stipulated that a tugboat should be on station to assist vessels in danger when crossing the bridge, a requirement that remained in place until the 1960s.

When it was built, Tower Bridge was the largest and most sophisticated bascule bridge ever completed (‘bascule’ comes from the French word for ‘seesaw’). These bascules were operated by hydraulics, using steam to power the enormous pumping engines.

The energy created was stored in six massive accumulators, meaning that as soon as power was required to lift the Bridge, it was always readily available.

The accumulators fed the driving engines, which drove the bascules up and down. Despite the complexity of the system, the bascules only took about a minute to raise to their maximum angle of 86 degrees.

Even today, the bascules are still operated by hydraulic power, but since 1976 they have been driven by oil and electricity rather than steam. 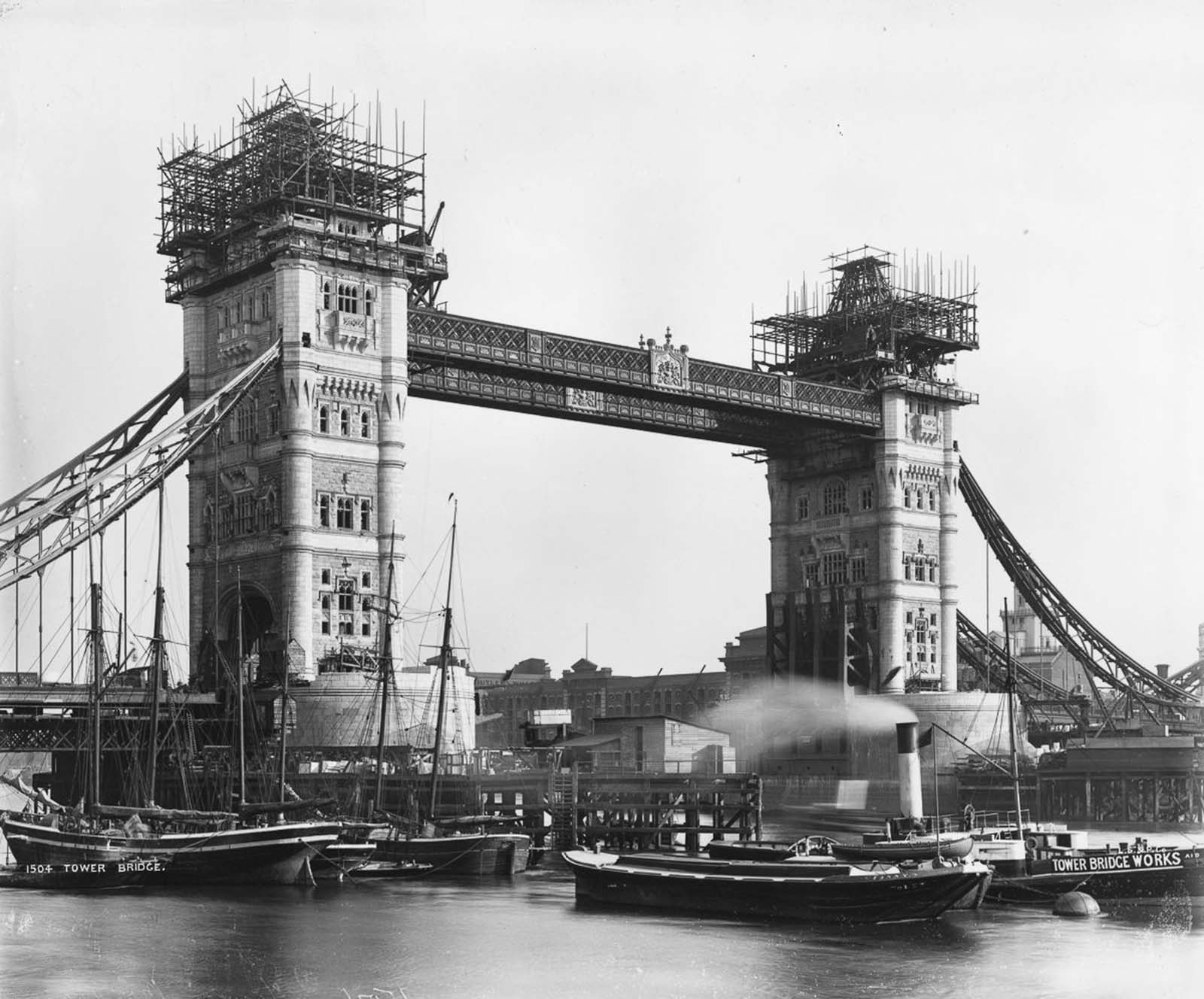 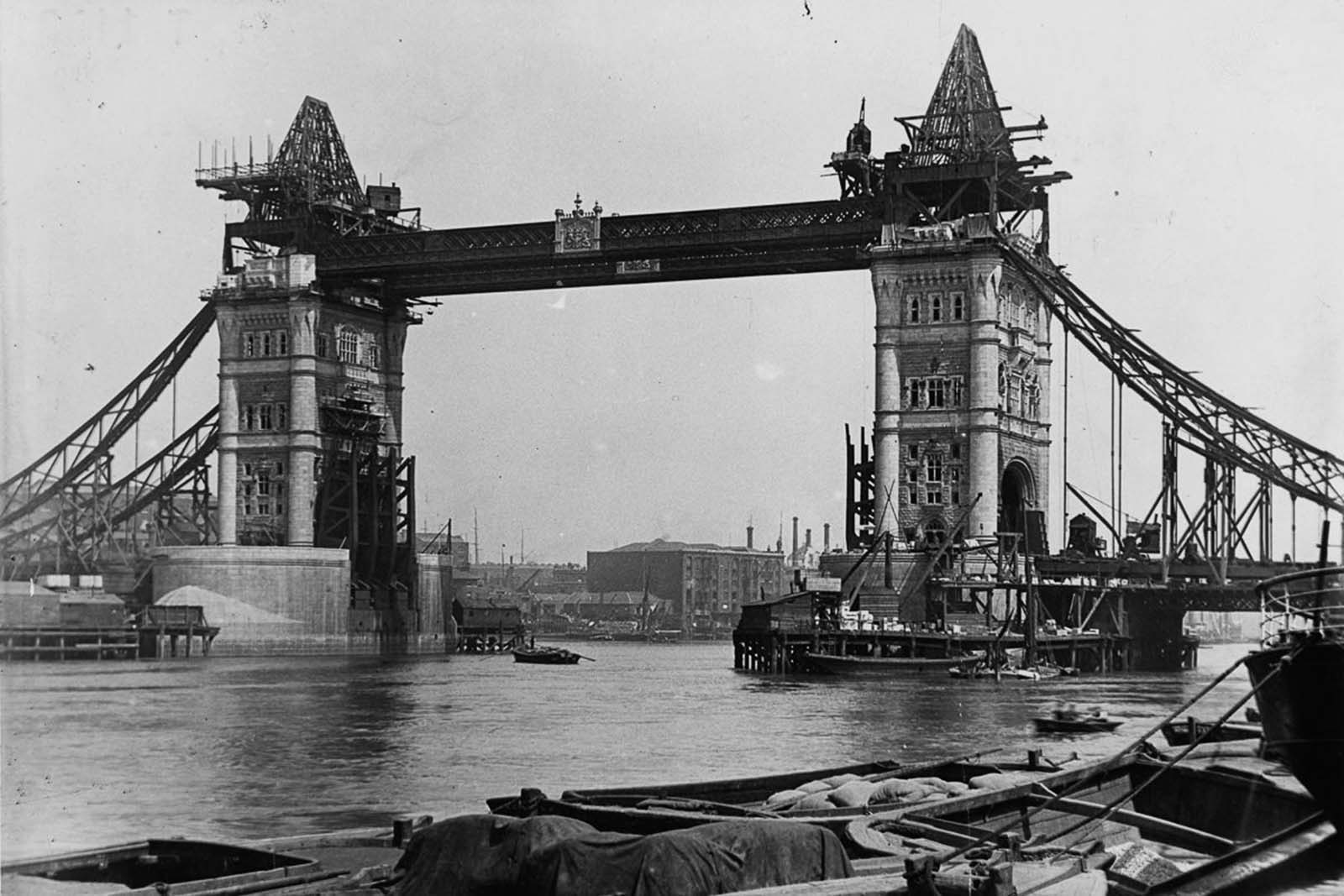 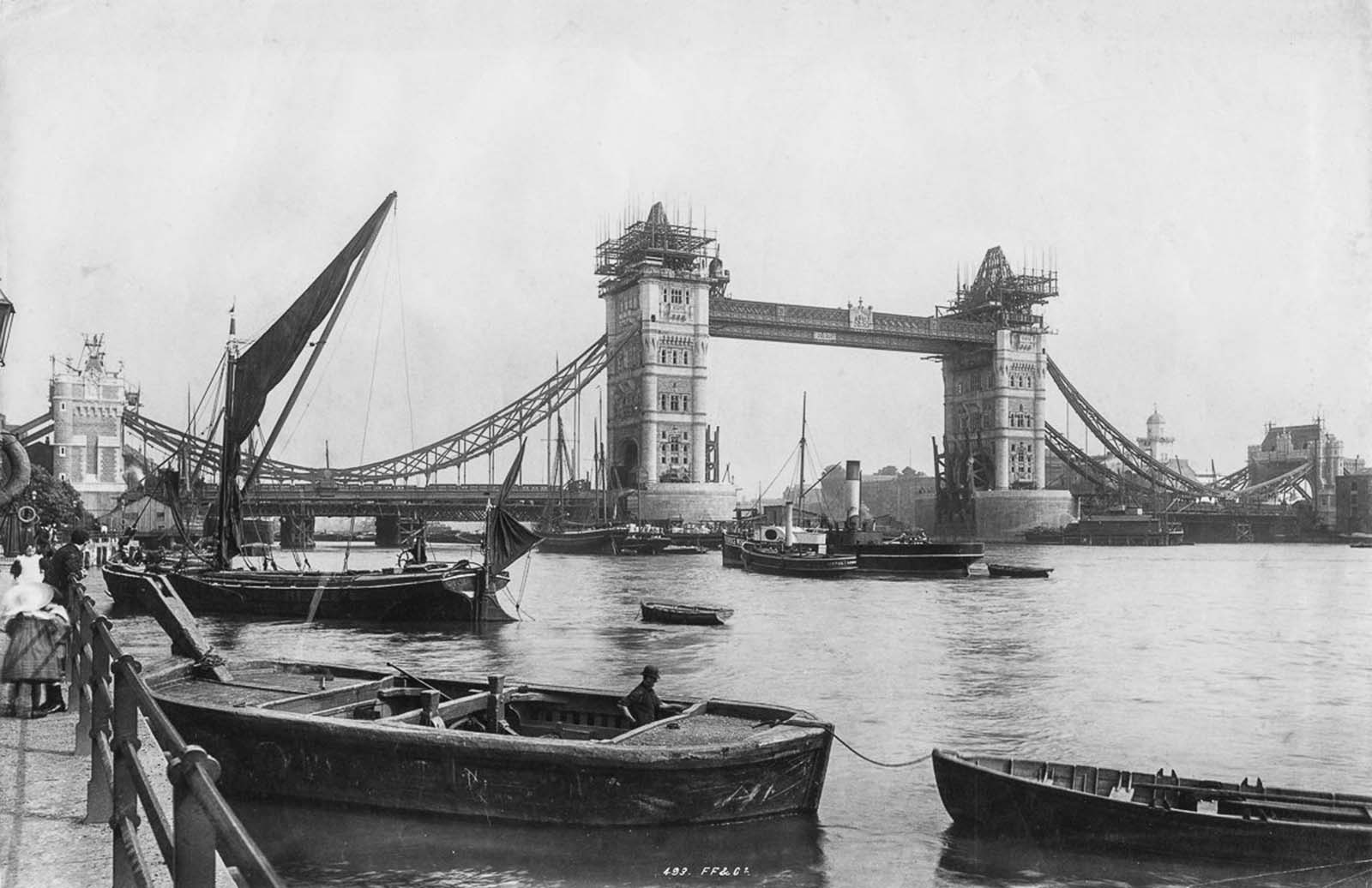 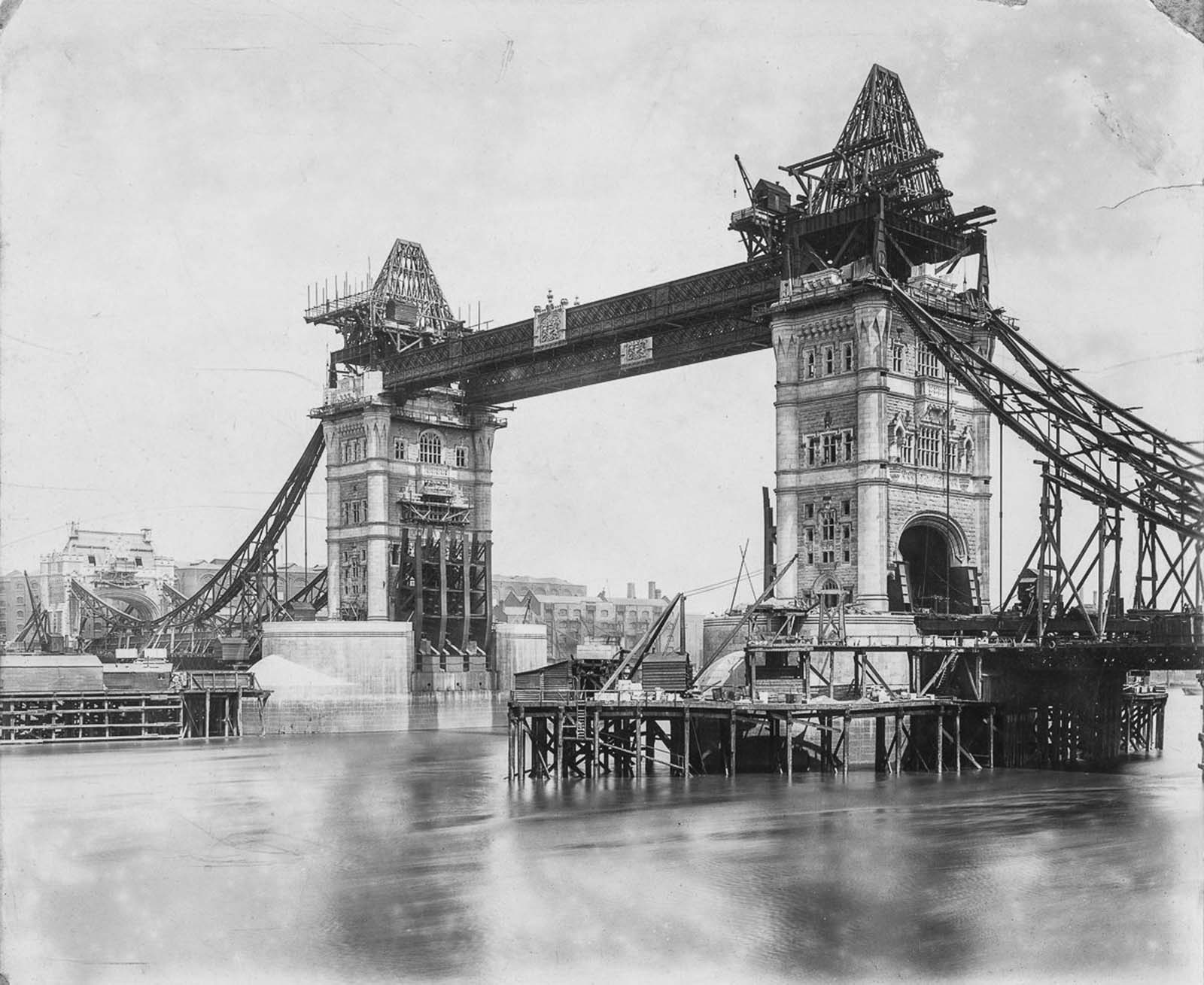 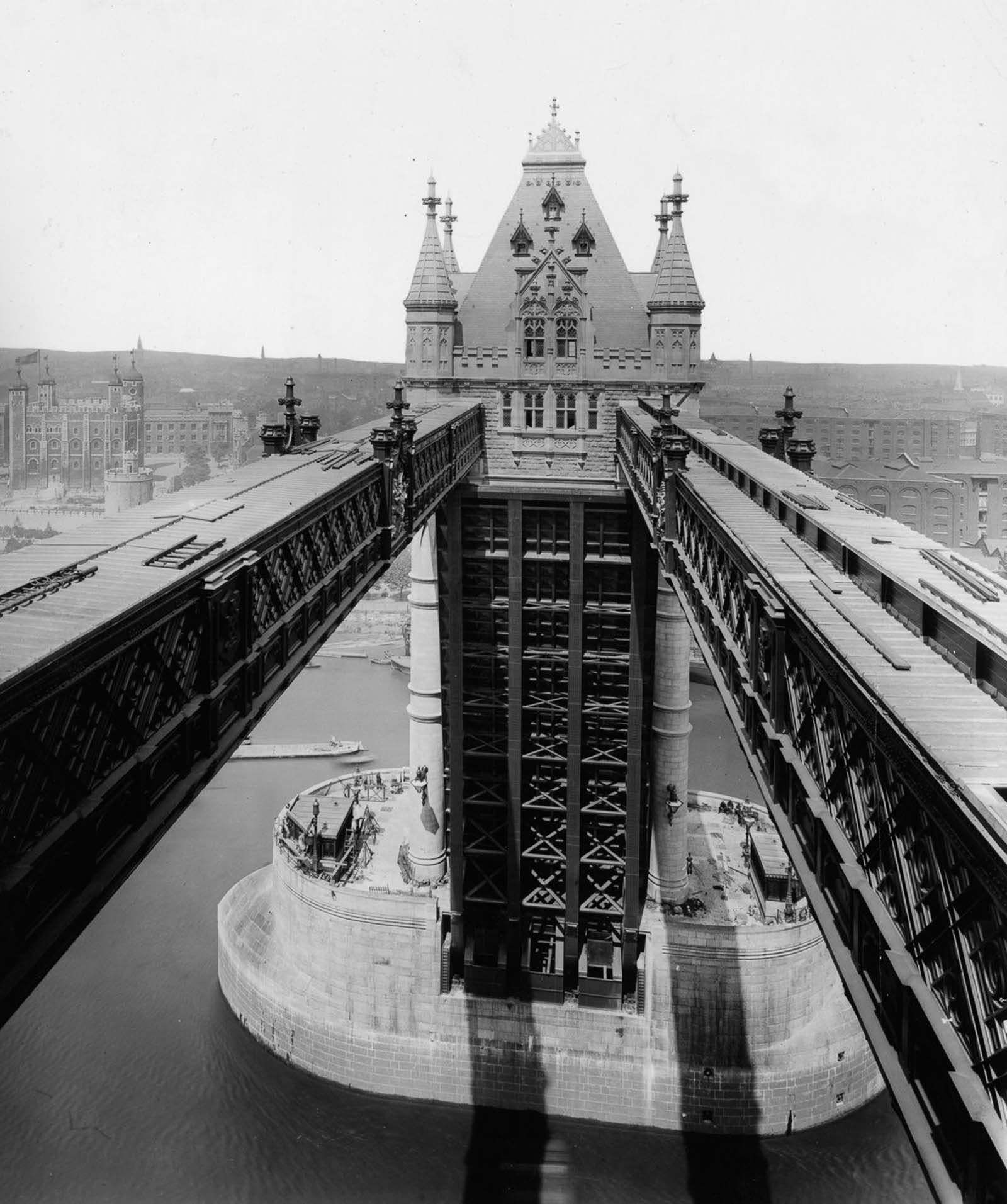 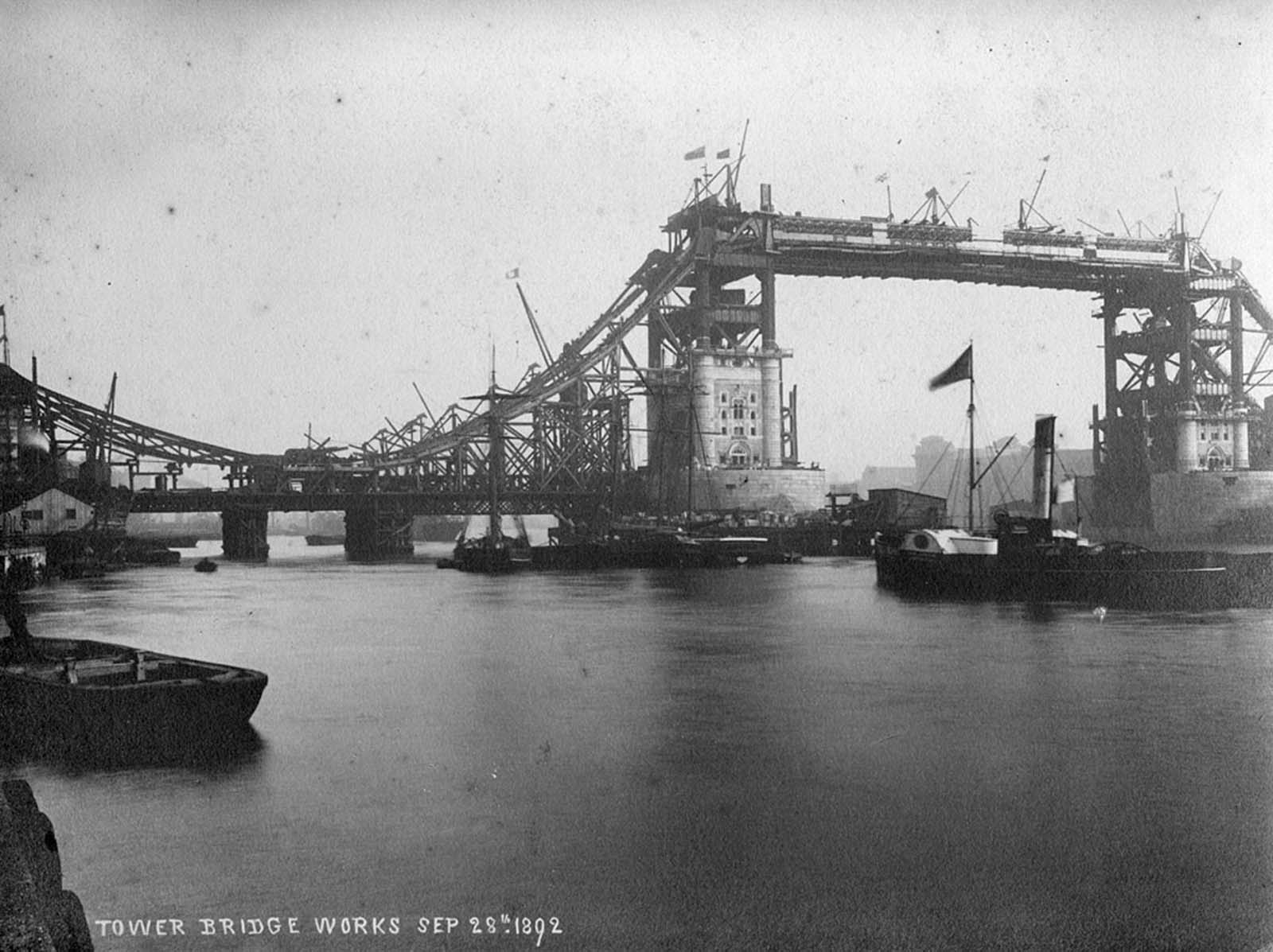 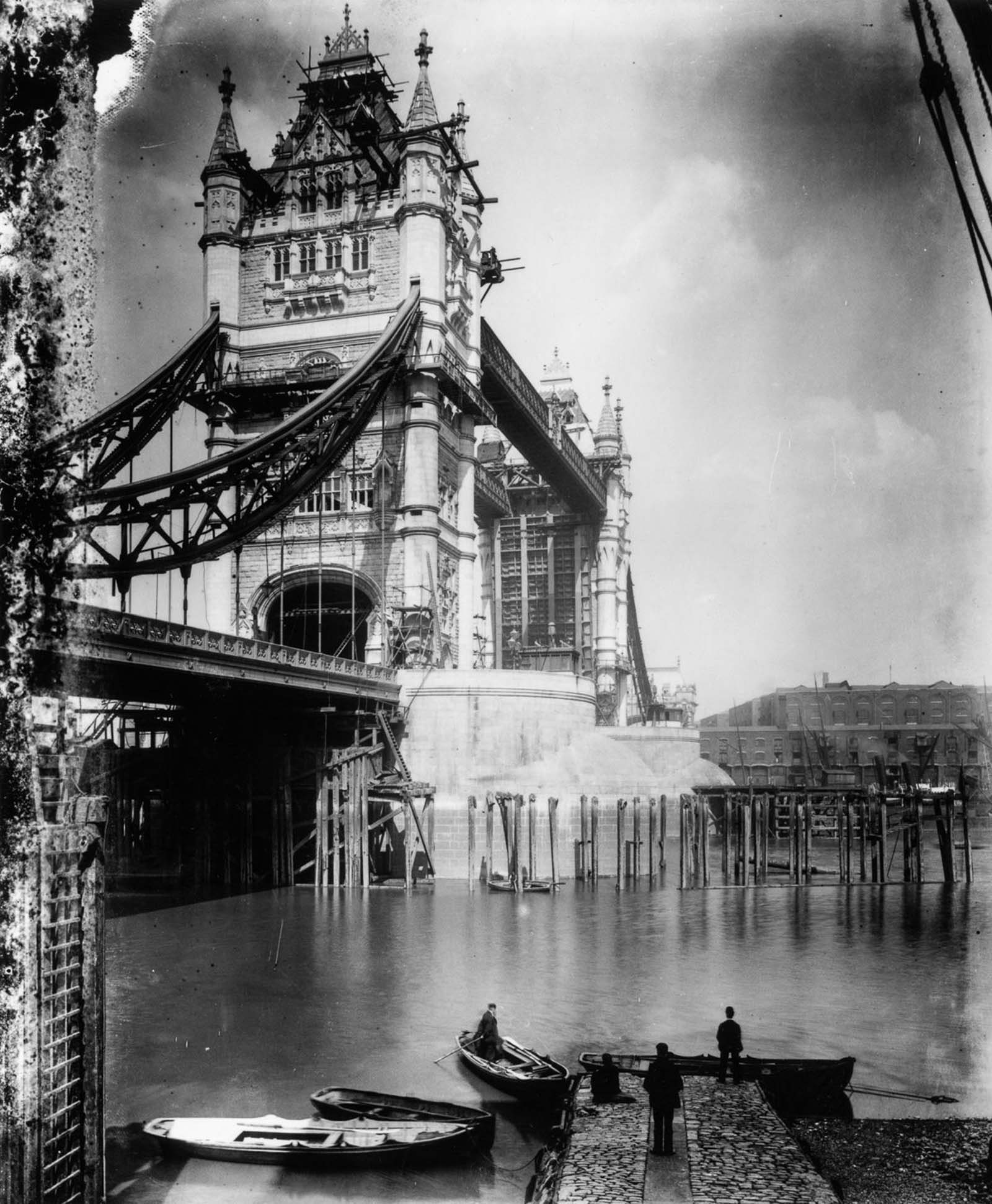 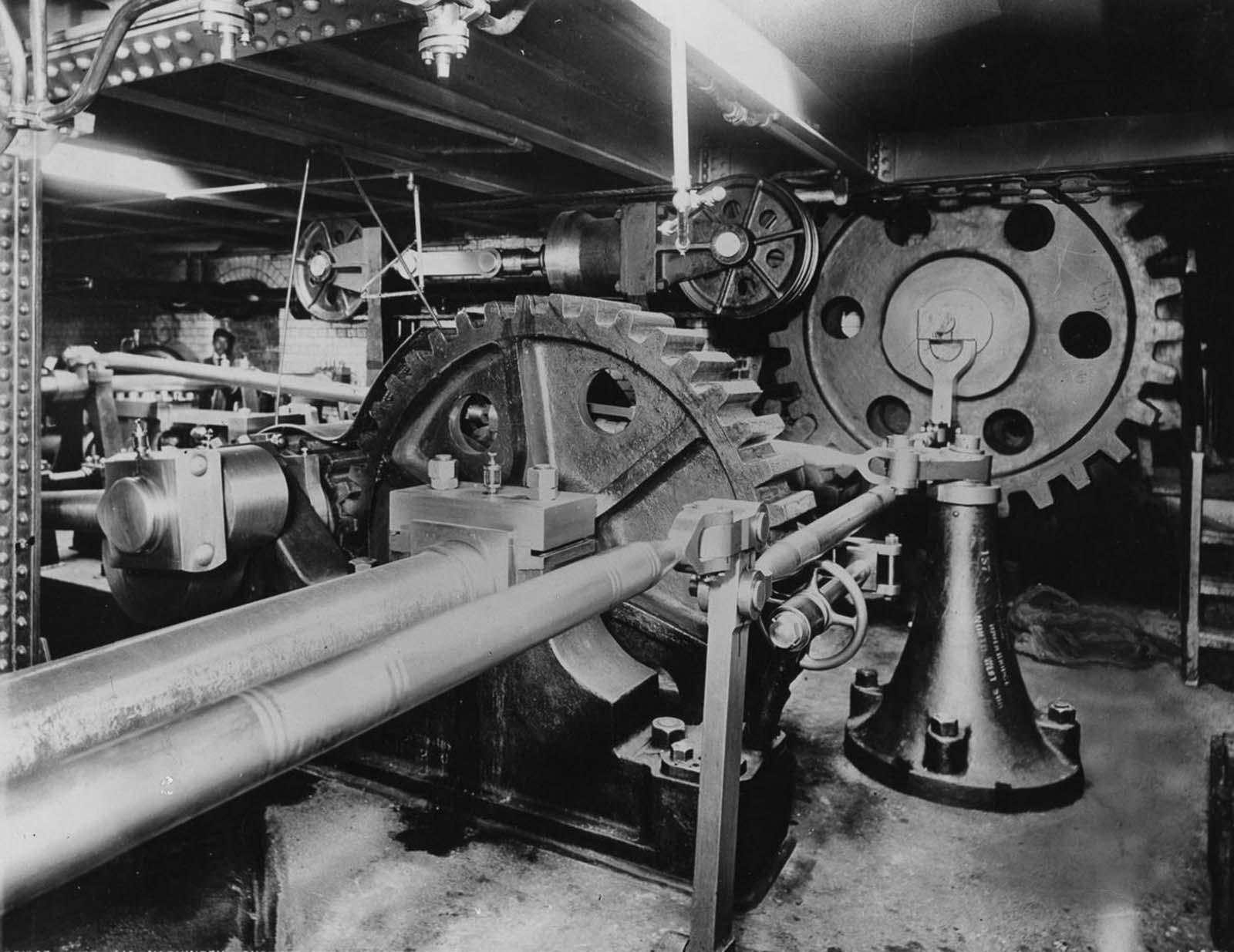 The main shafting of the hydraulic machinery at Tower Bridge. 1895. 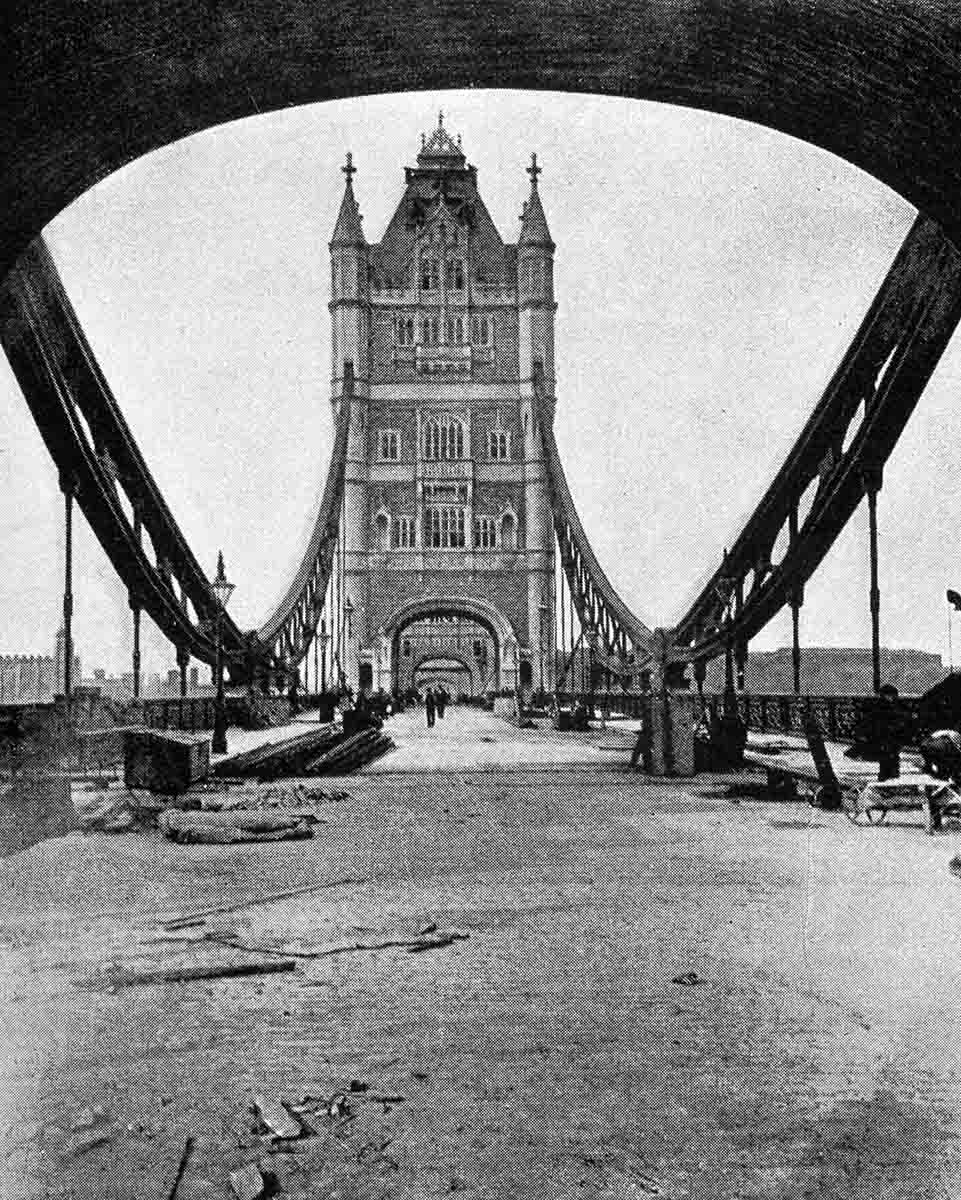 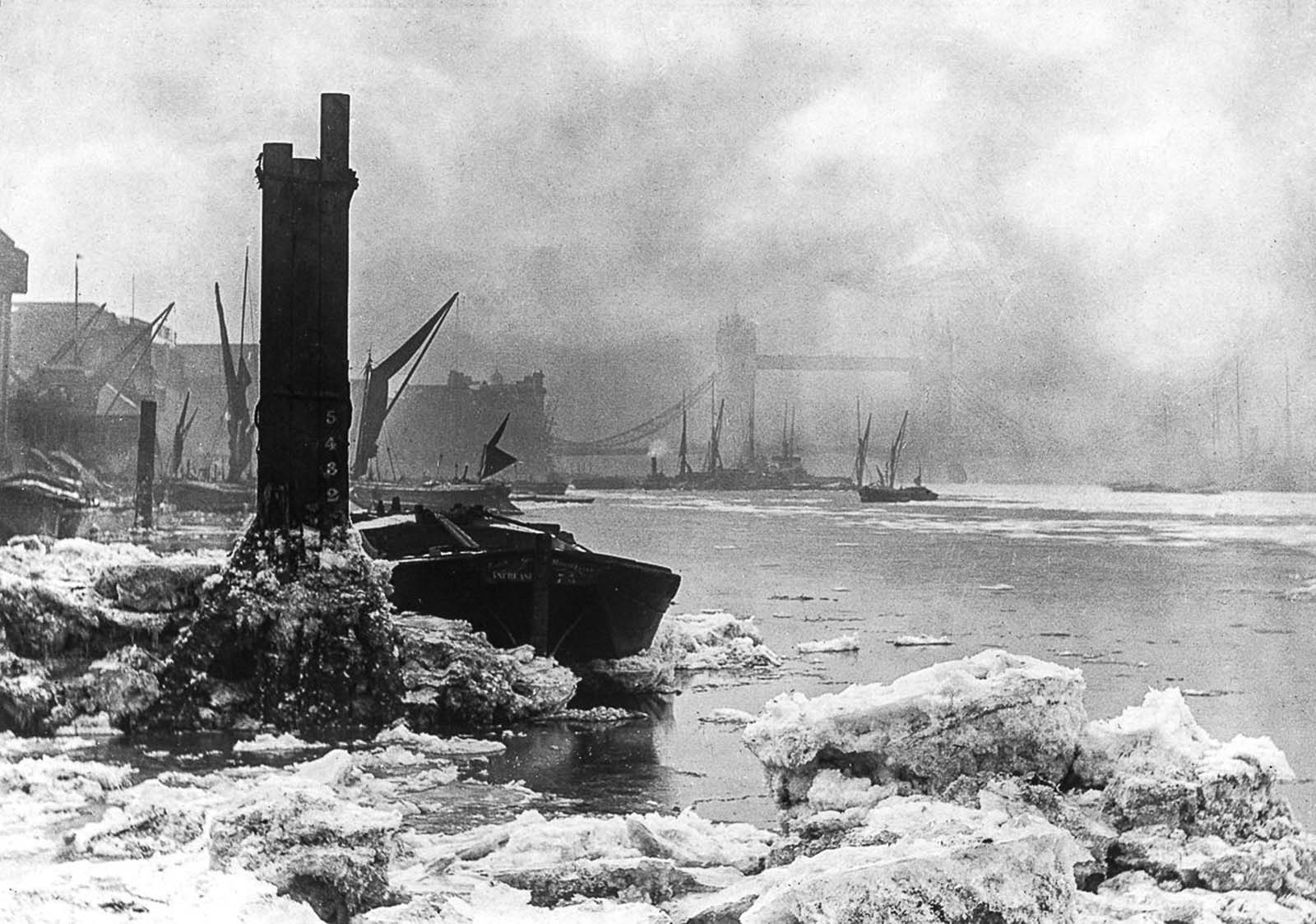 Ice floes clog the Thames near Tower Bridge during the severe cold spell of December 1894 to March 1895. 1894. 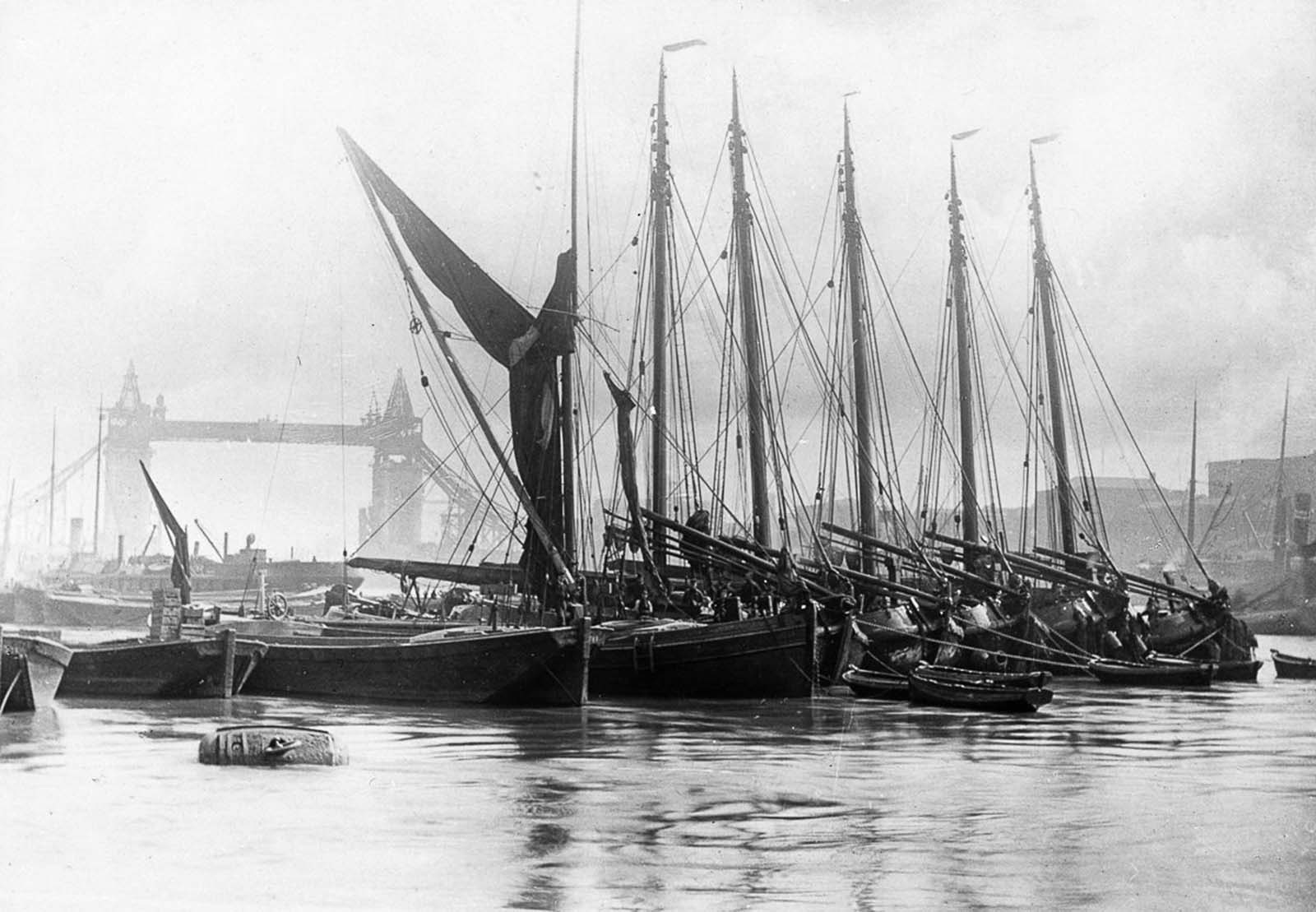 A row of boats moored on the Thames, with Tower Bridge in the background. 1895. 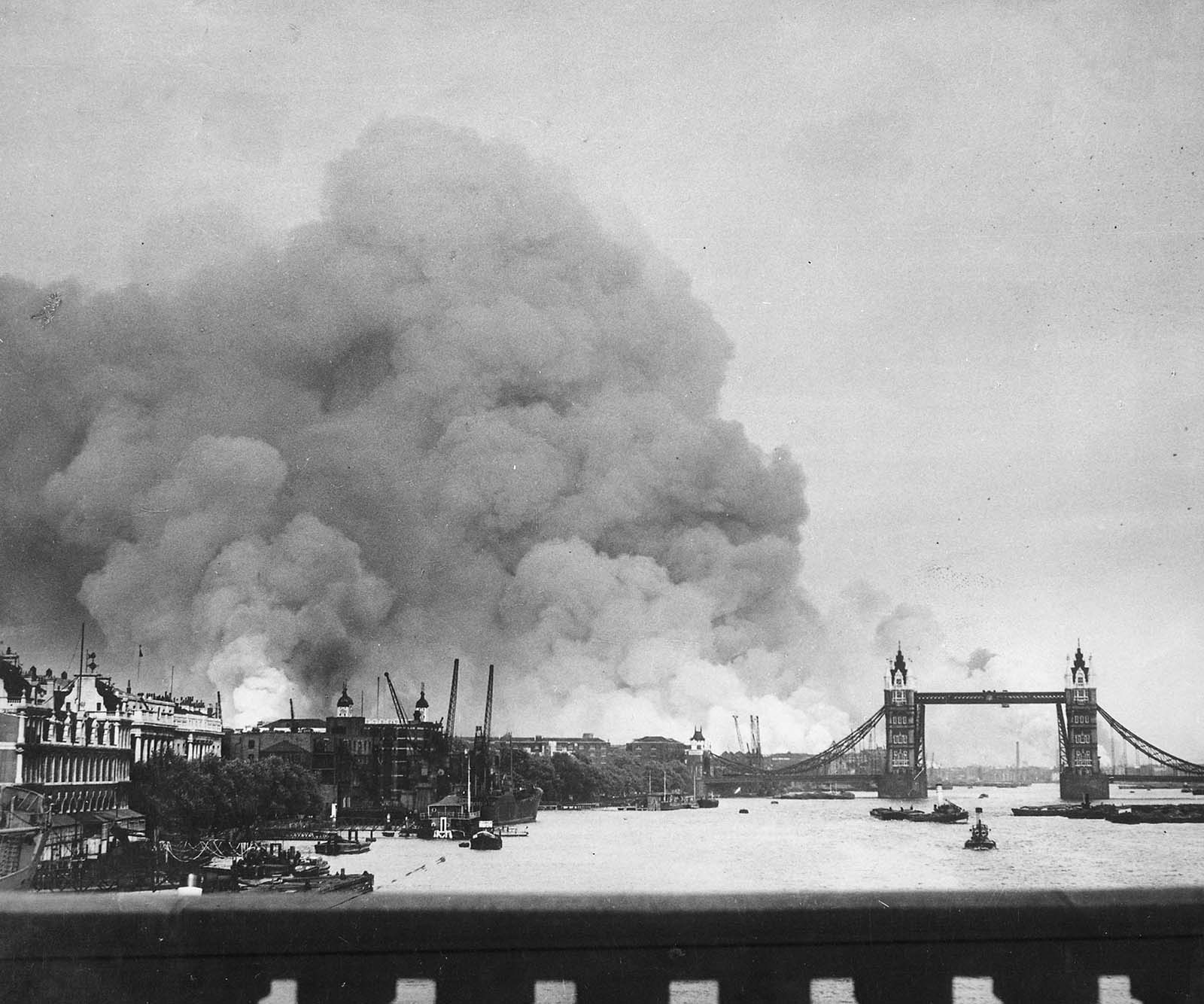 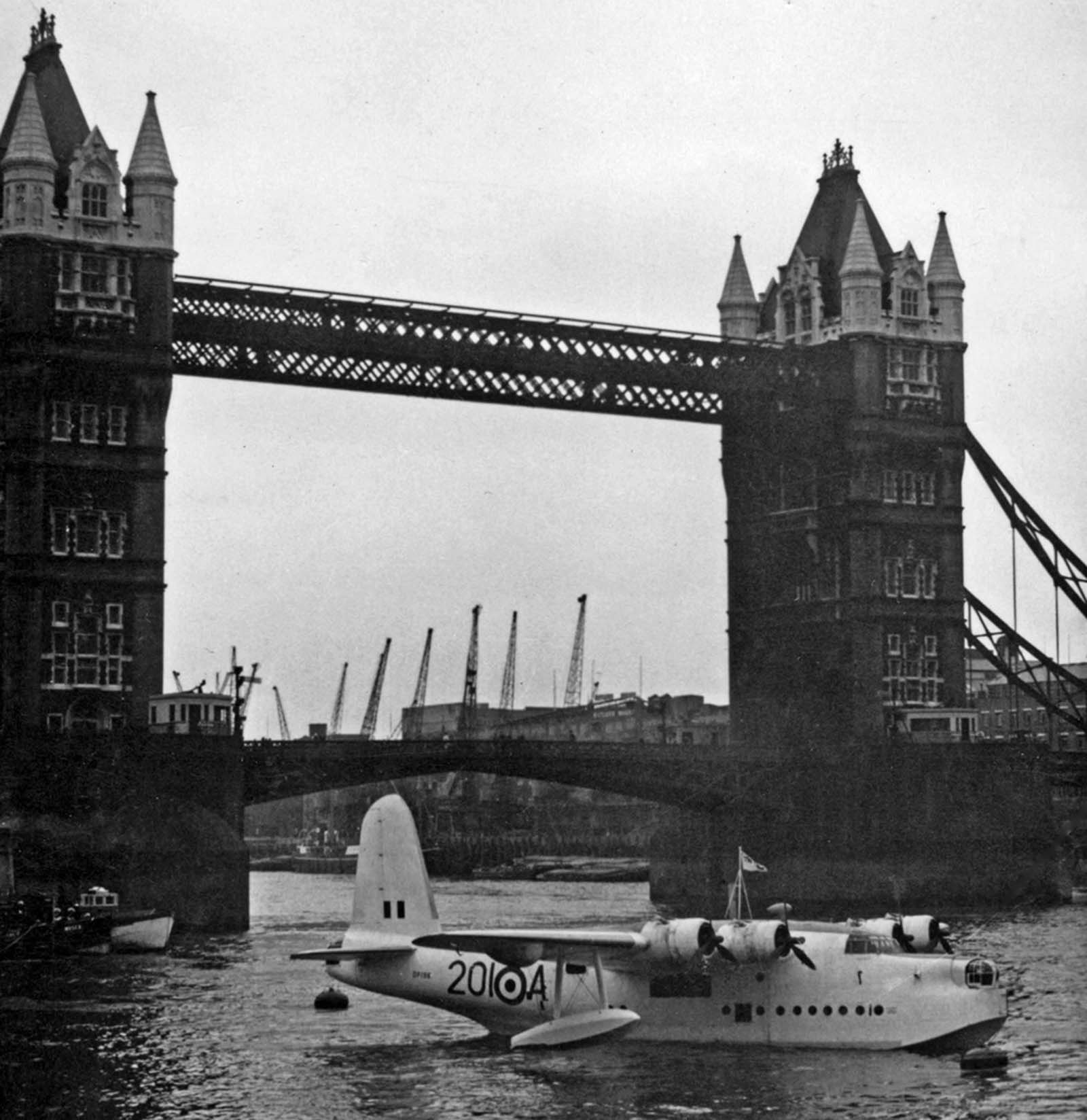 A Short Sunderland of No. 201 Squadron RAF moored at Tower Bridge during the 1956 commemoration of the Battle of Britain. 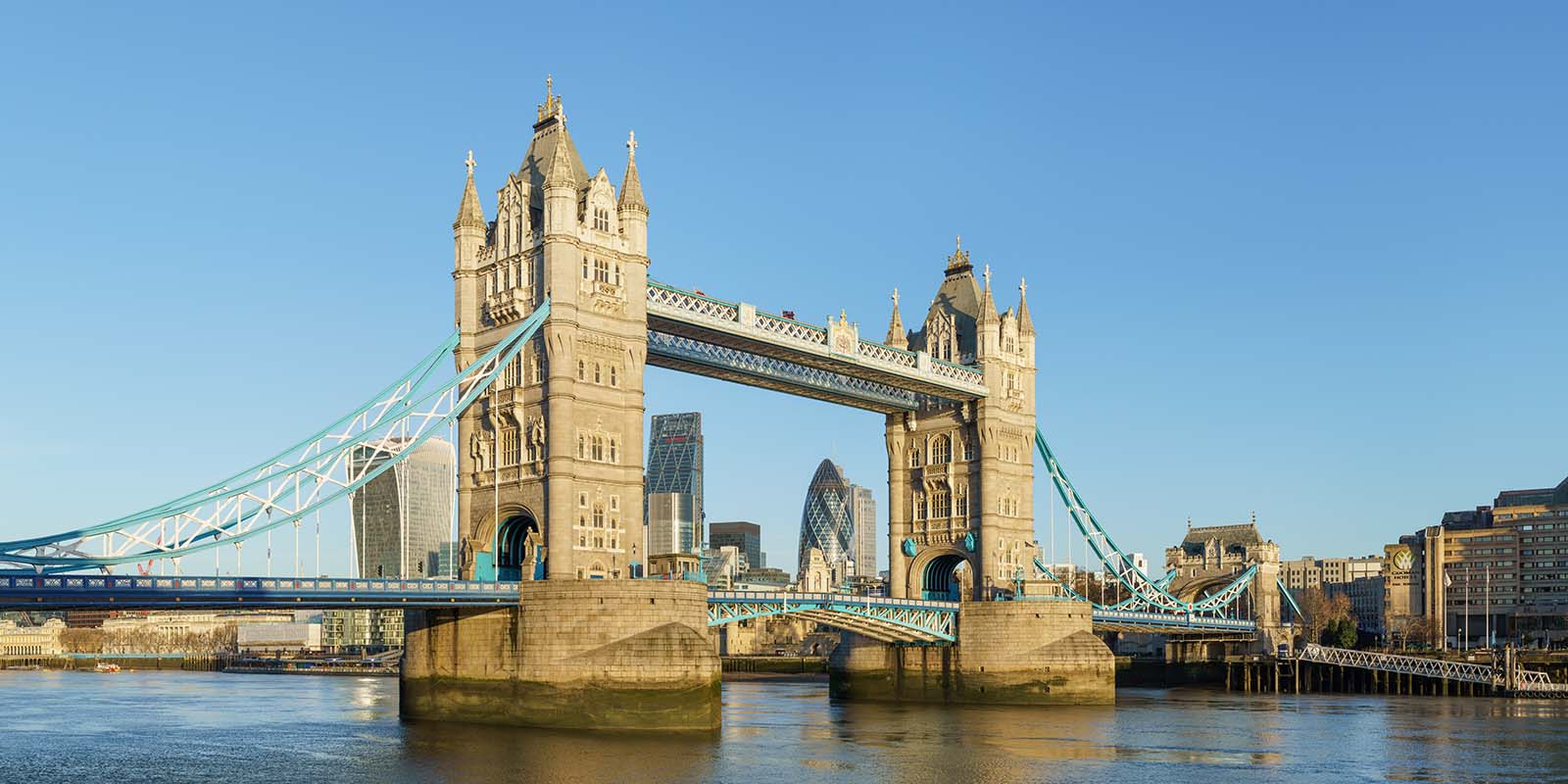