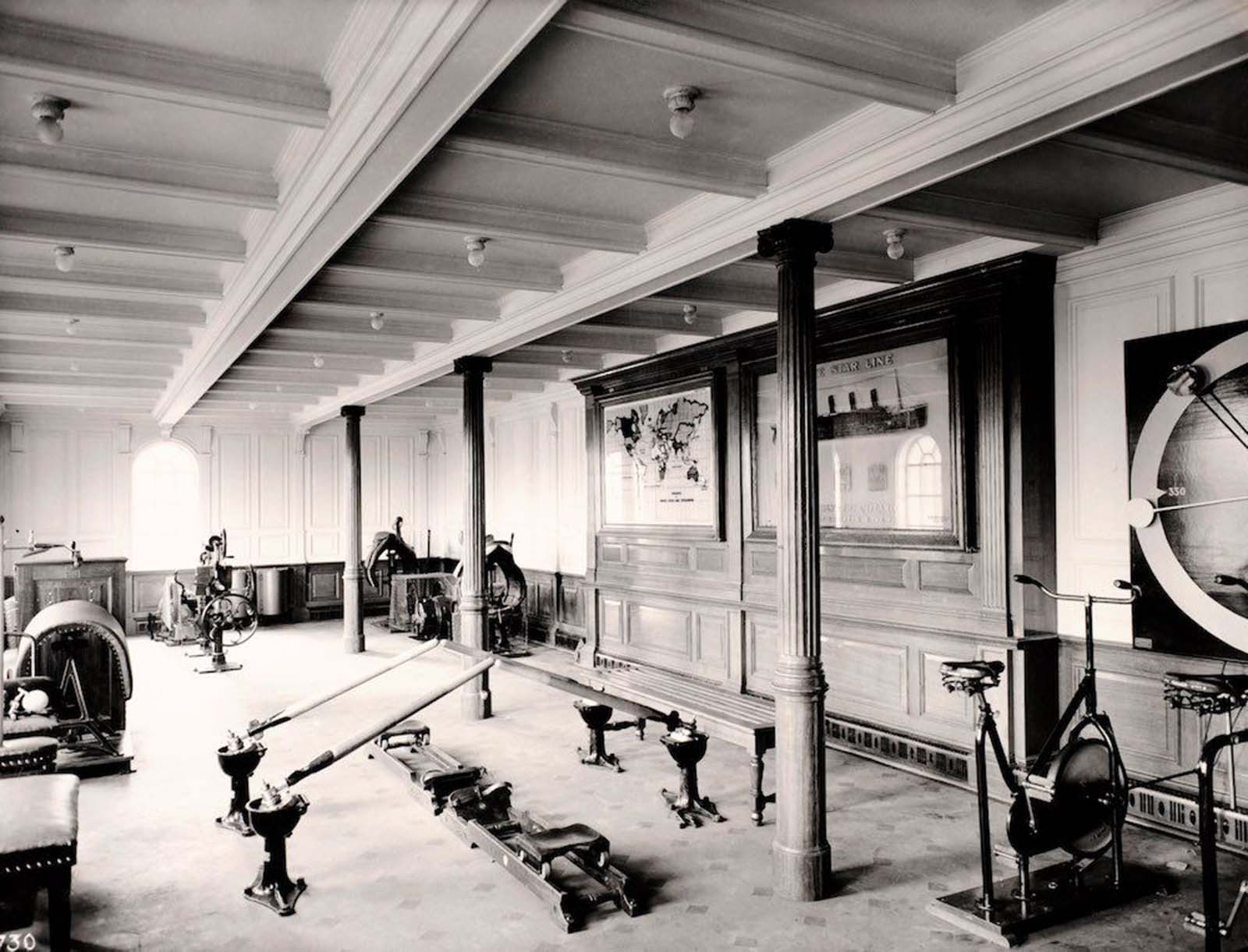 The first-class gymnasium on board the Titanic. On the night of April 14, when the ship struck an iceberg, the physical instructor Mr. T. W. McCauley remained at his post and went down with the ship. March, 1912.

At the beginning of the 20th century, the shipping route across the Atlantic was extremely popular, driven by waves of European emigrants from all parts of Europe to the United States.

Travel on these liners was not a recreational cruise but merely a means of transport between the two continents. The crossing took around five days when these photographs were taken.

Liners were divided by economic class, and for first-class passengers, life on an ocean liner was dreamy. Luxury transatlantic travel reached its zenith, with the waters dominated by the British companies Cunard and the White Star Line, as well as the French Line Compagnie Générale Transatlantique (CGT).

A trip between New York and London took close to two weeks, and first-class travelers, accustomed to the luxuries provided by grand, five-star hotels, came to expect the same level of service at sea. And they were not disappointed.

With the finest menus and limited opportunities for walking, some method of exercise was necessary. First-class passengers aboard the Titanic had access not only to squash courts and Turkish baths but to another amenity, as well: a shipboard gymnasium.

The facility, shown in the pictures below, featured the 1912 versions of equipment that will be familiar to modern-day gym-goers, among them stationary bikes and rowing machines.

The gym was open for women between 9:00 am and noon, and for men between 2:00 pm and 6:00 pm. (Children were allowed inside only between 1:00 pm and 3:00 pm.) The facility was presided over by the Titanic’s physical educator, Thomas McCauley, who, in the early morning of April 15, remained at his post as the ship sank. 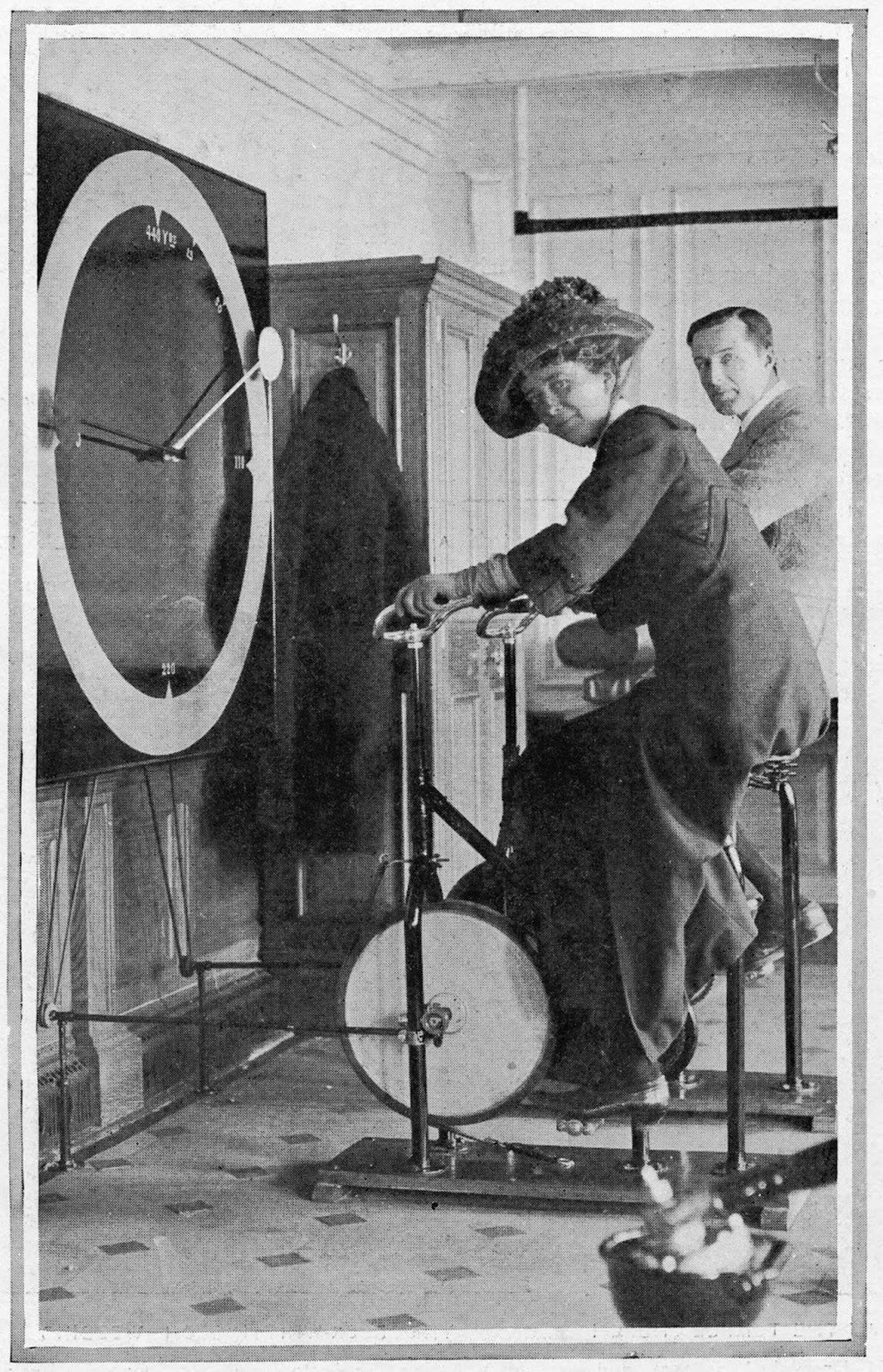 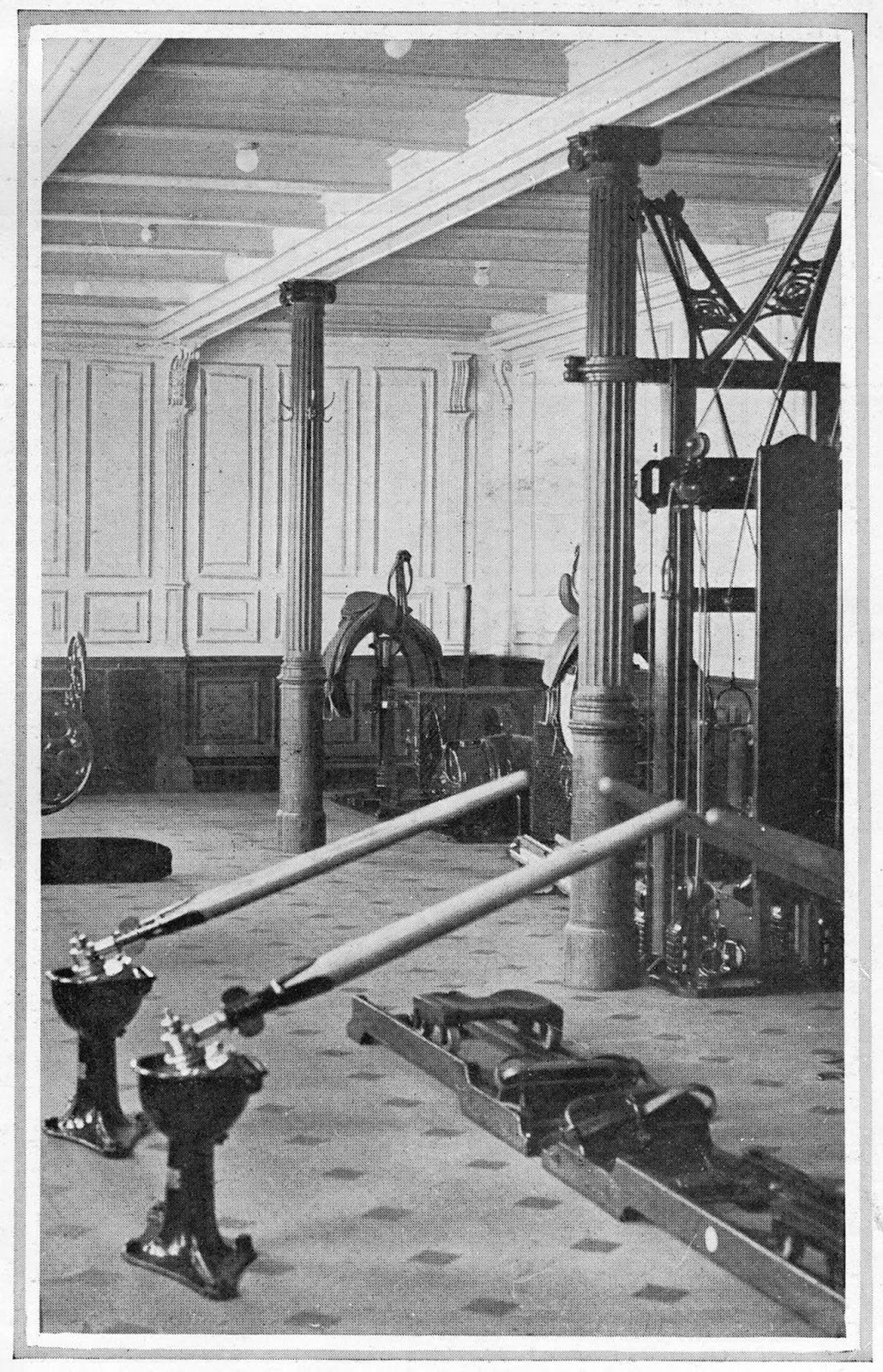 The gymnasium on the Titanic. Passengers could ride on a mechanical saddle or exercise “as if in a racing skiff.” 1912. 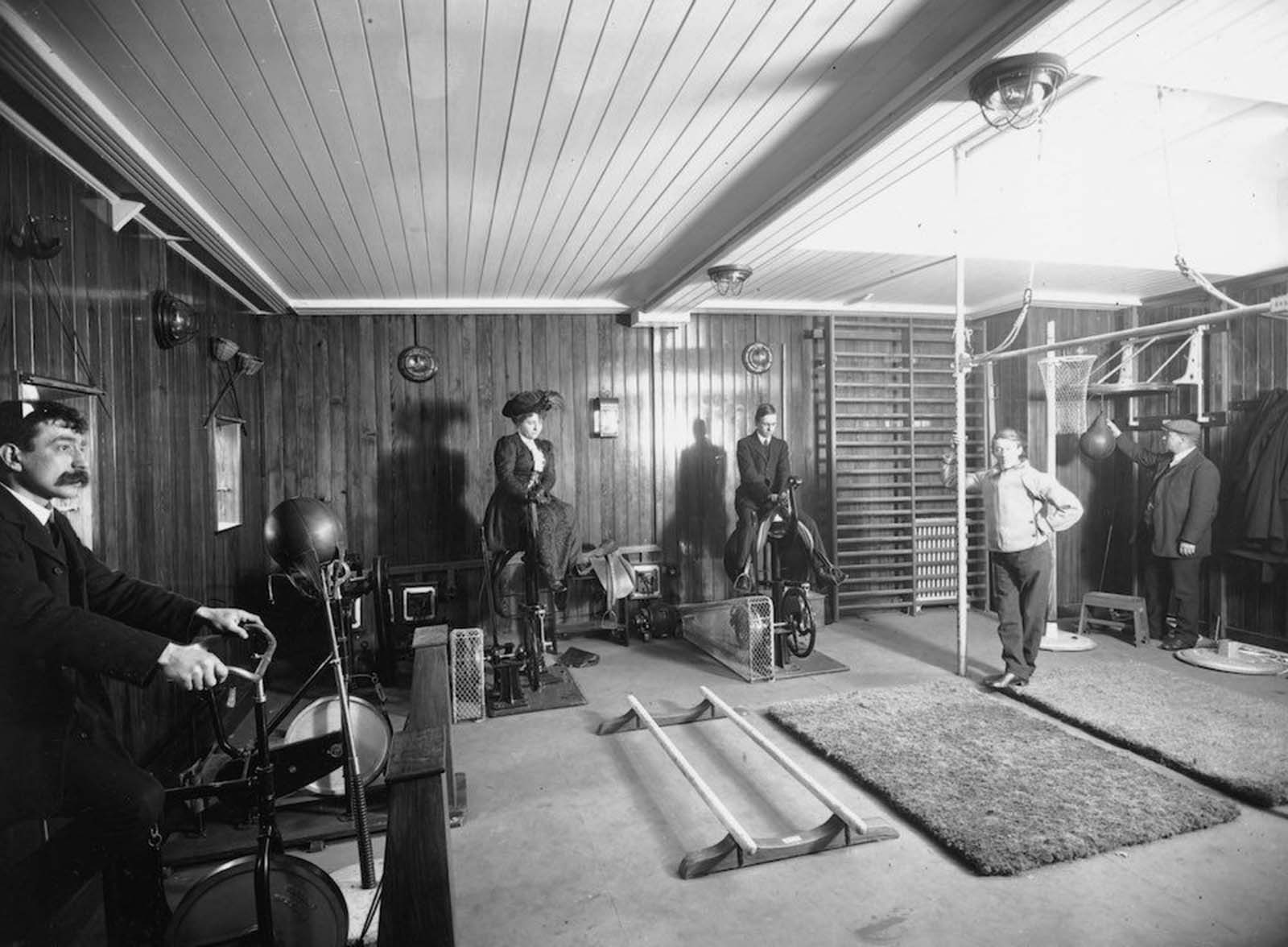 Edwardians riding exercise bikes whilst wearing day clothes in a gymnasium on board the Cunard line liner, RMS Franconia. Feb 21, 1911. 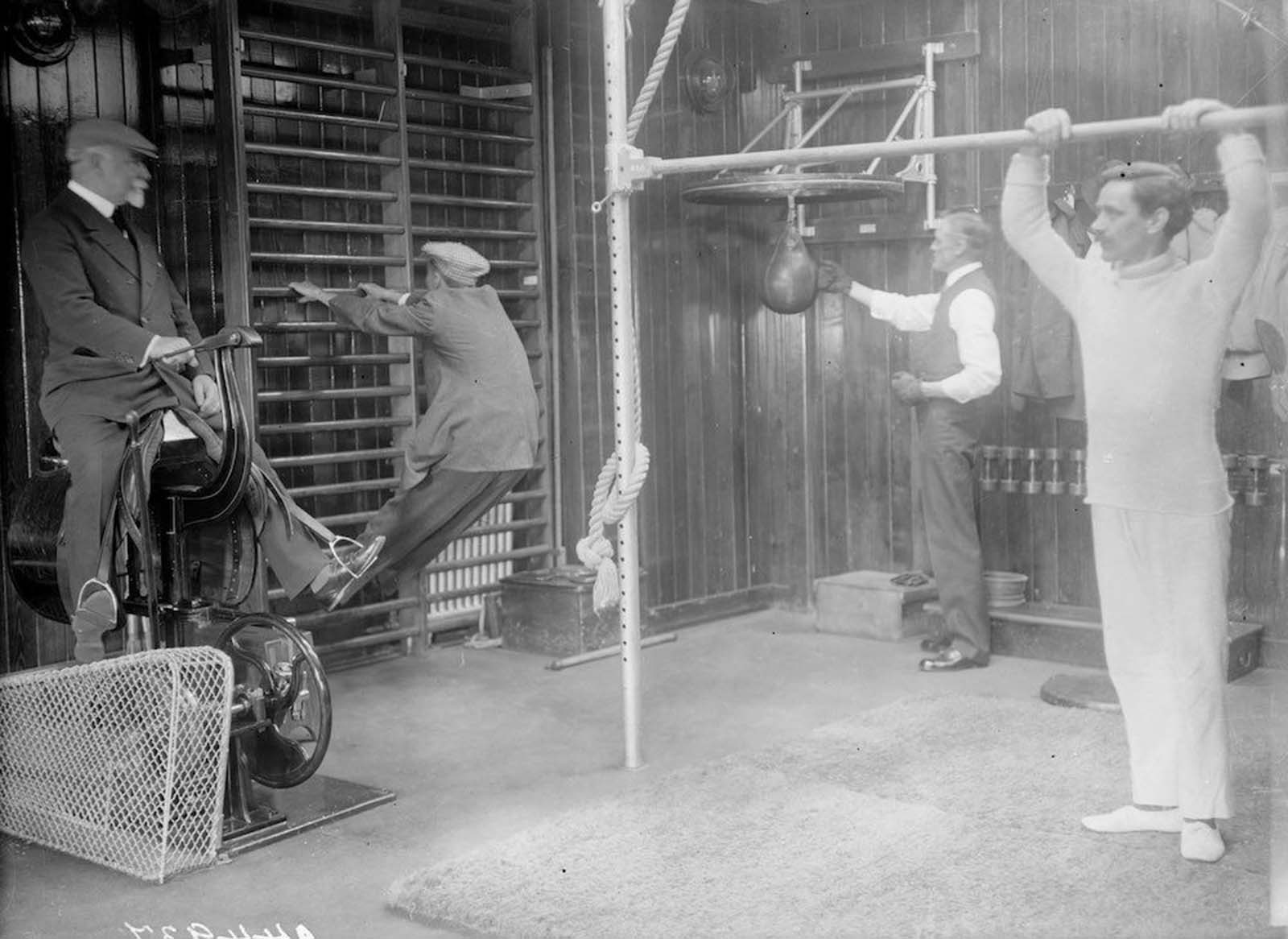 Passengers working out in the gym of the Cunard cruise liner Franconia, which was destroyed by a U-boat in 1916. Amongst the equipment is a punchbag and an early cycling machine. 1912. 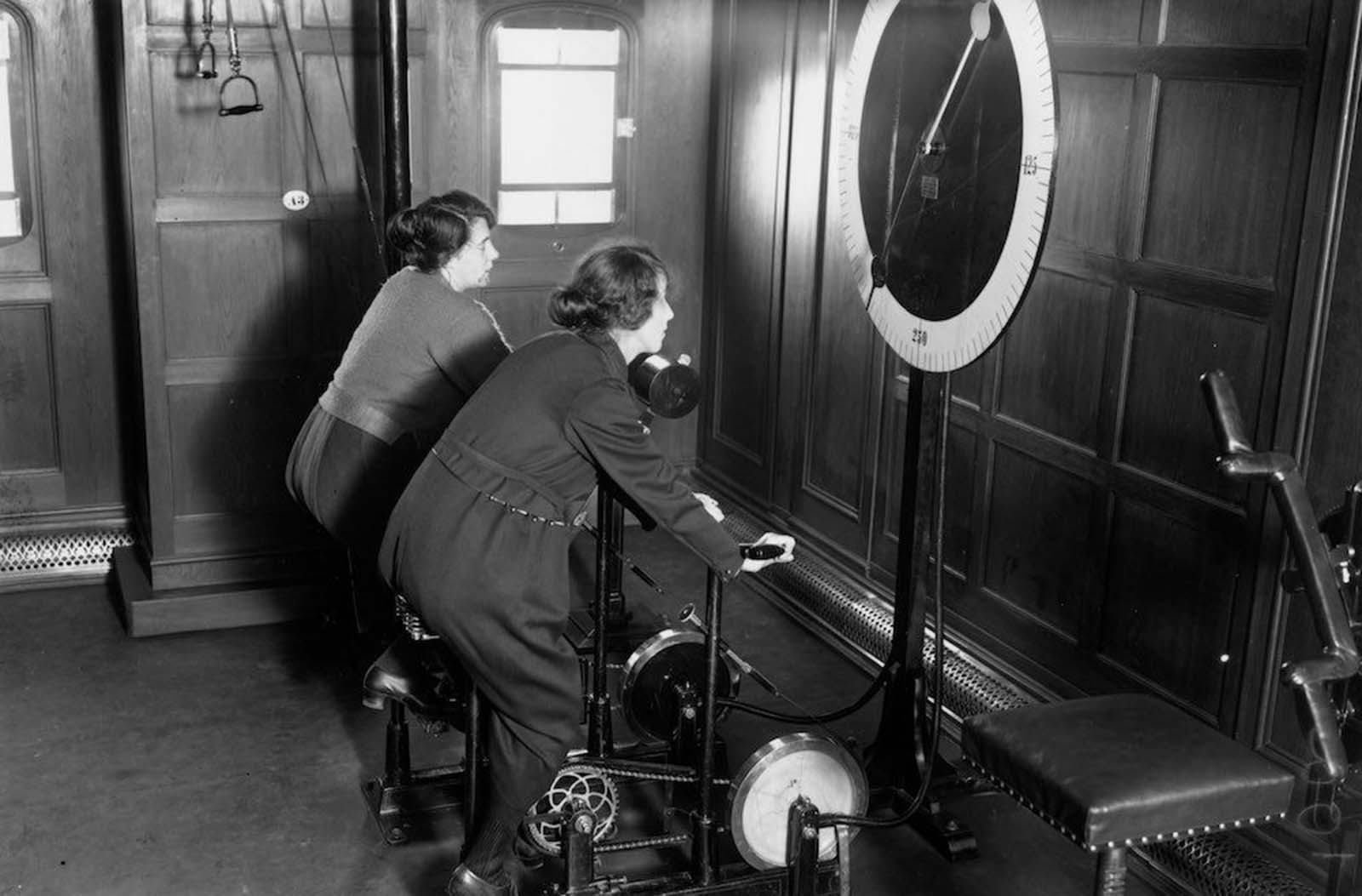 Two women using the cycle machine in the gym on board the Homeric Liner, taken over from the Germans by White Star. 1922. 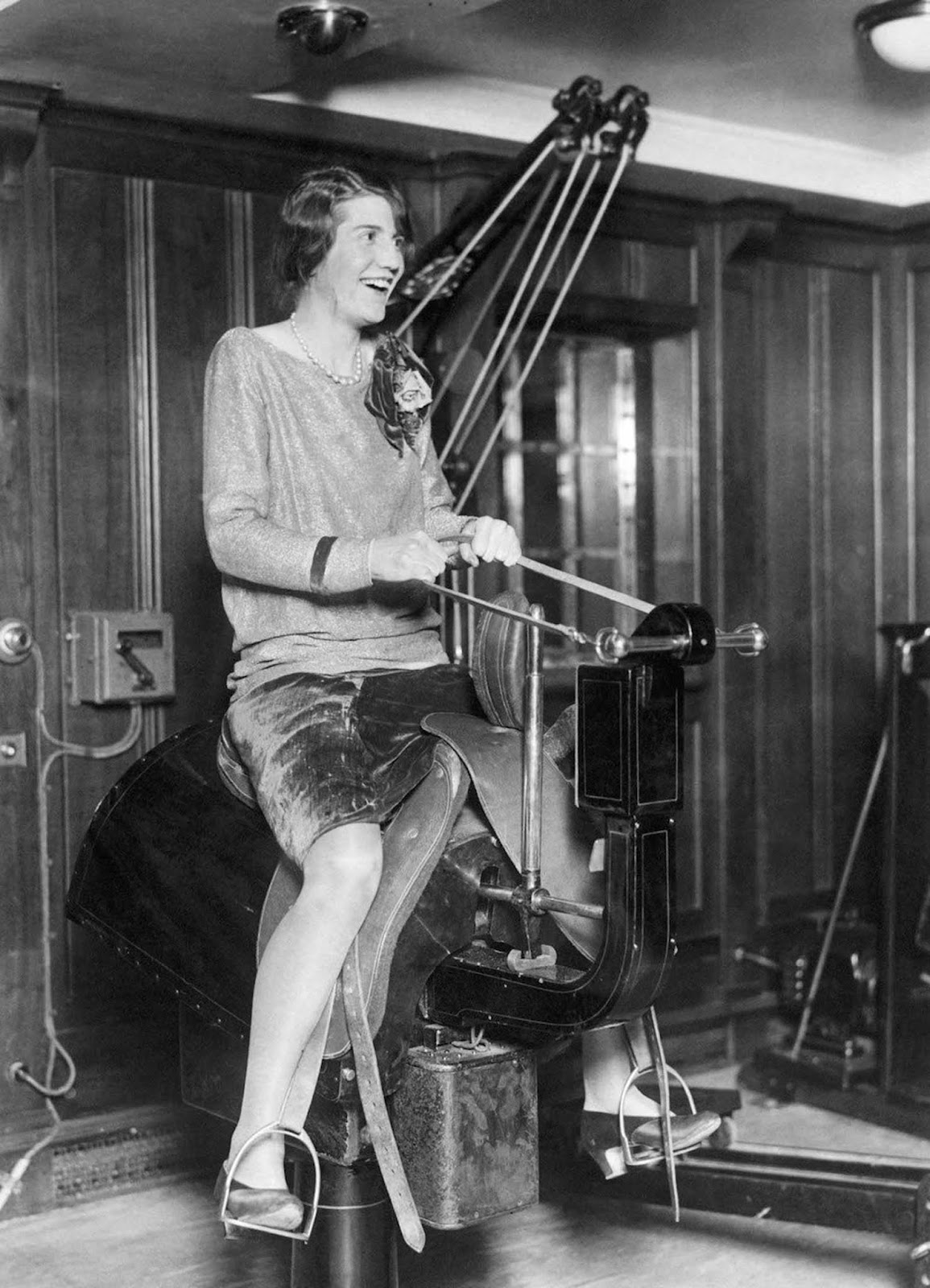 A young woman passenger riding the electric horse in the gym on the liner SS Bermuda. Mid 1920s. 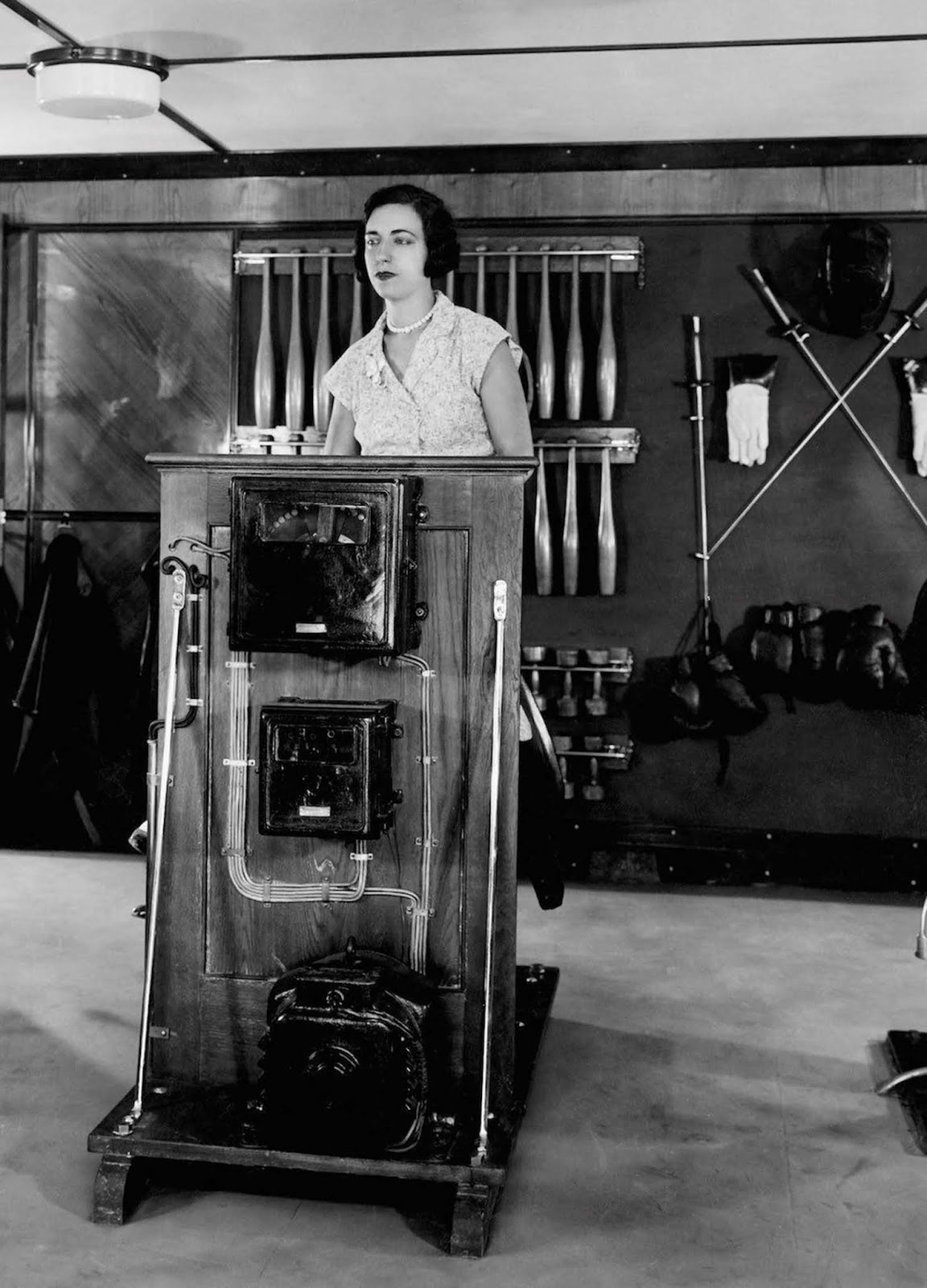 The gym on the Victoria Motorship. 1930. 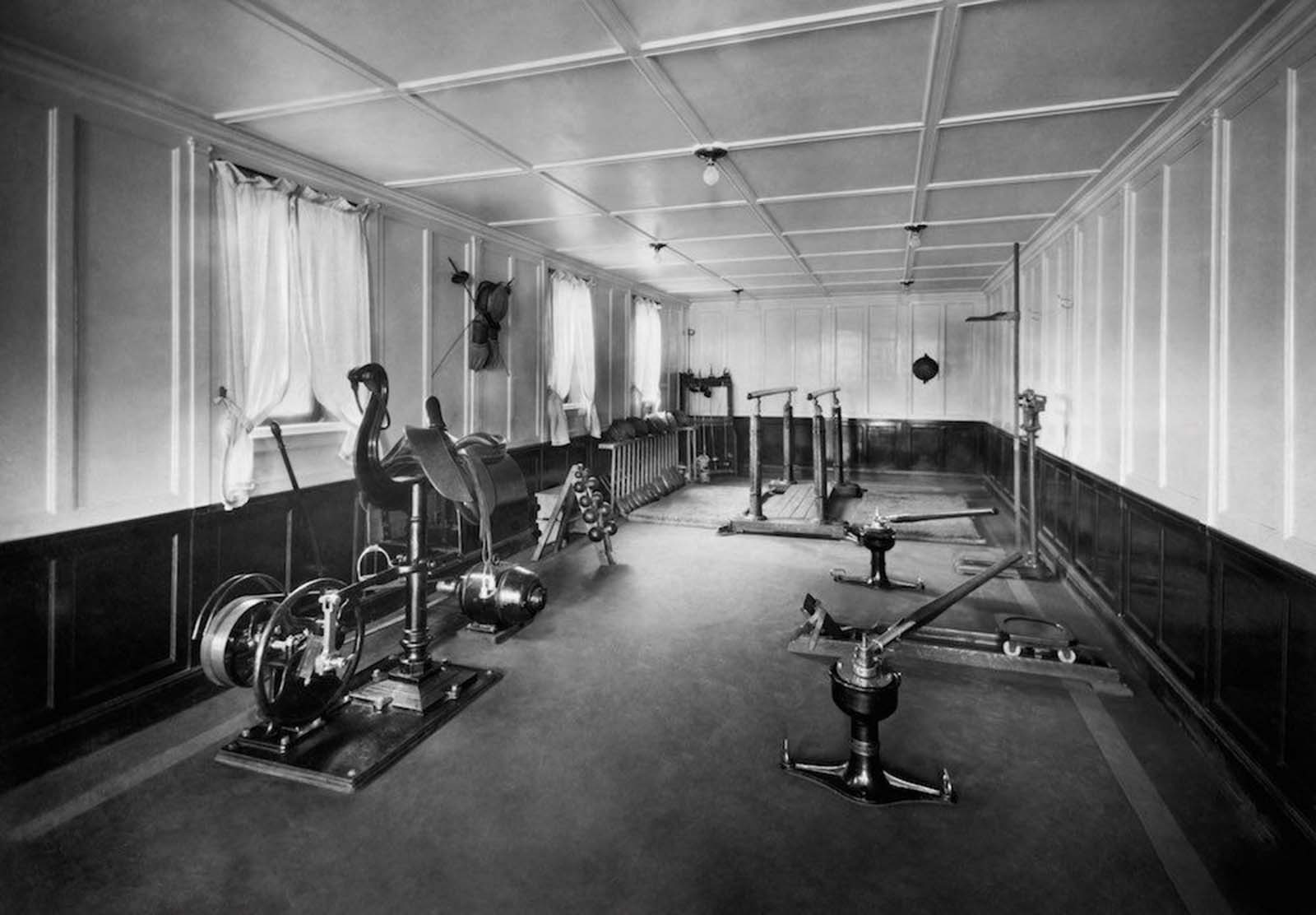 Gym of the Neptunia Transatlantic Liner. 1930. 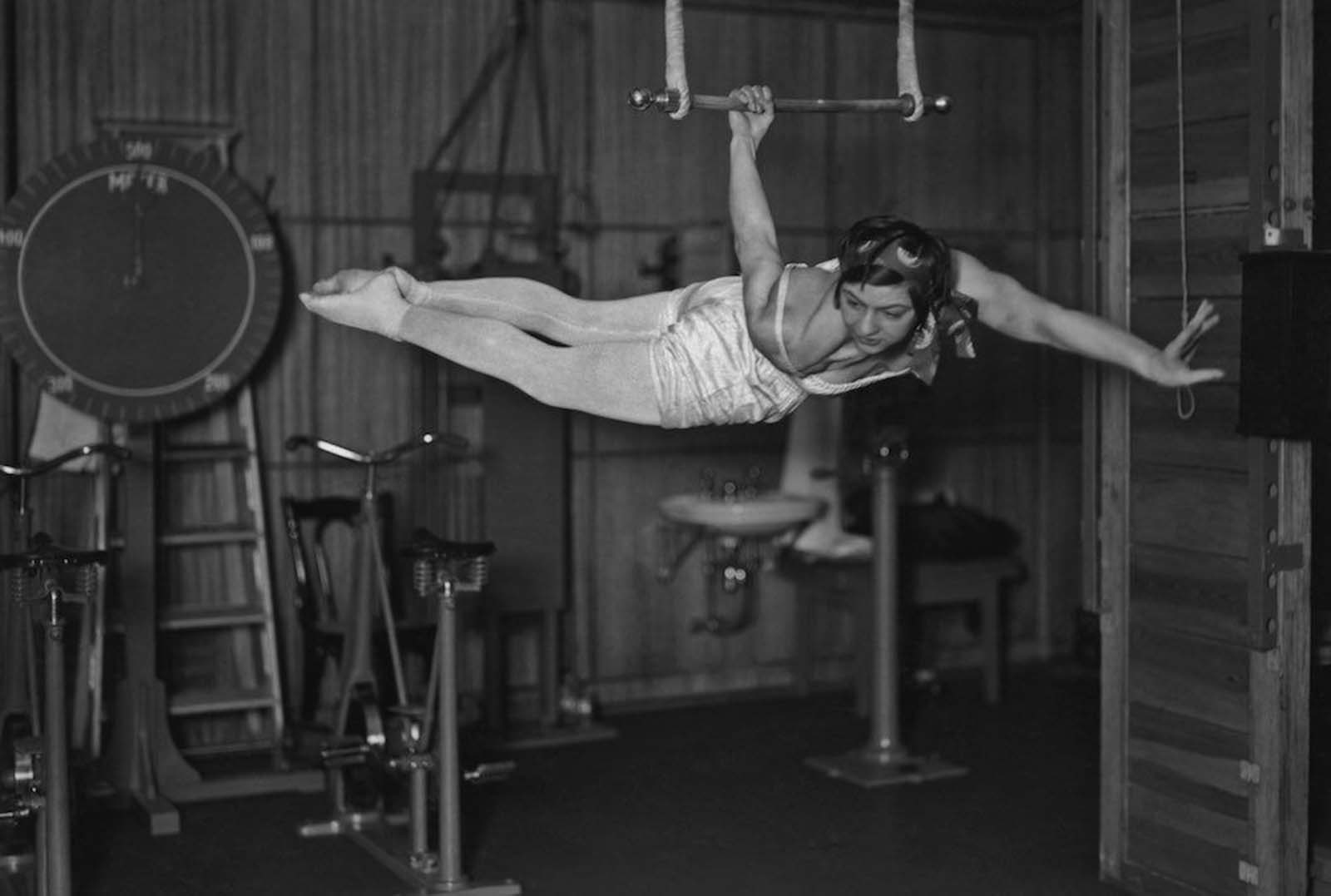 A woman using an apparatus in the gymnasium of the ocean liner S.S. Bremen. 1930s. 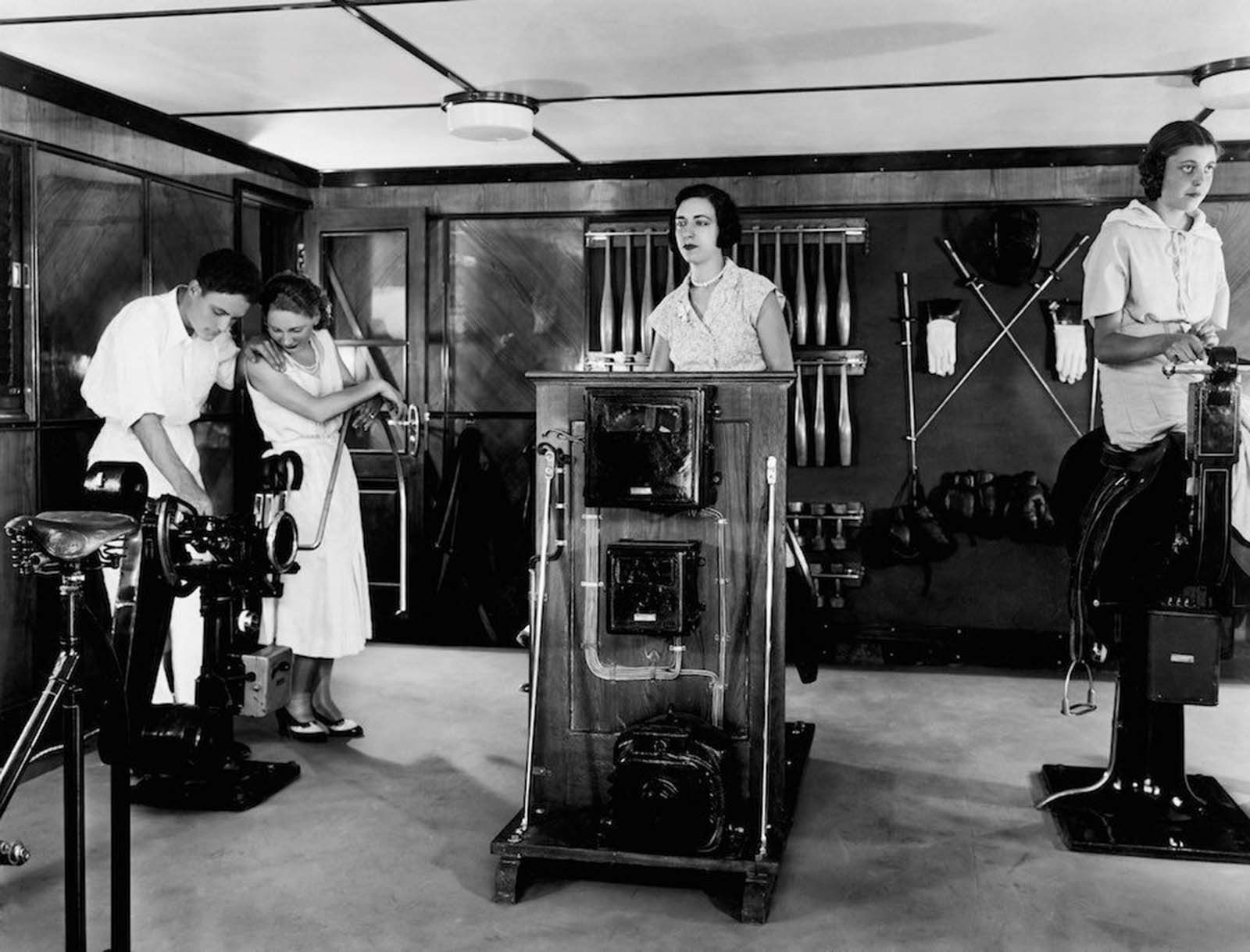 The gym of the Victoria Transatlantic. 1930. 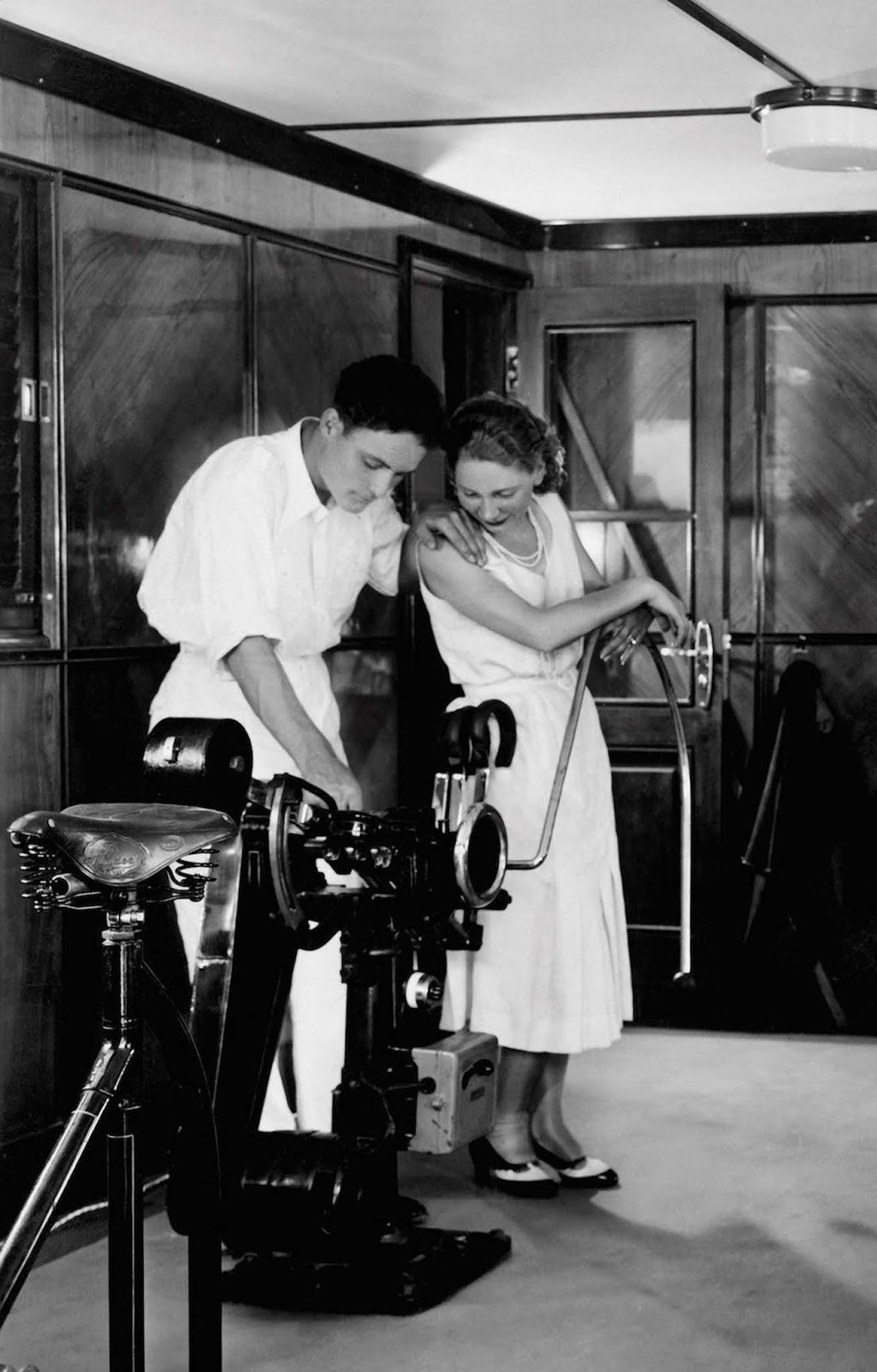 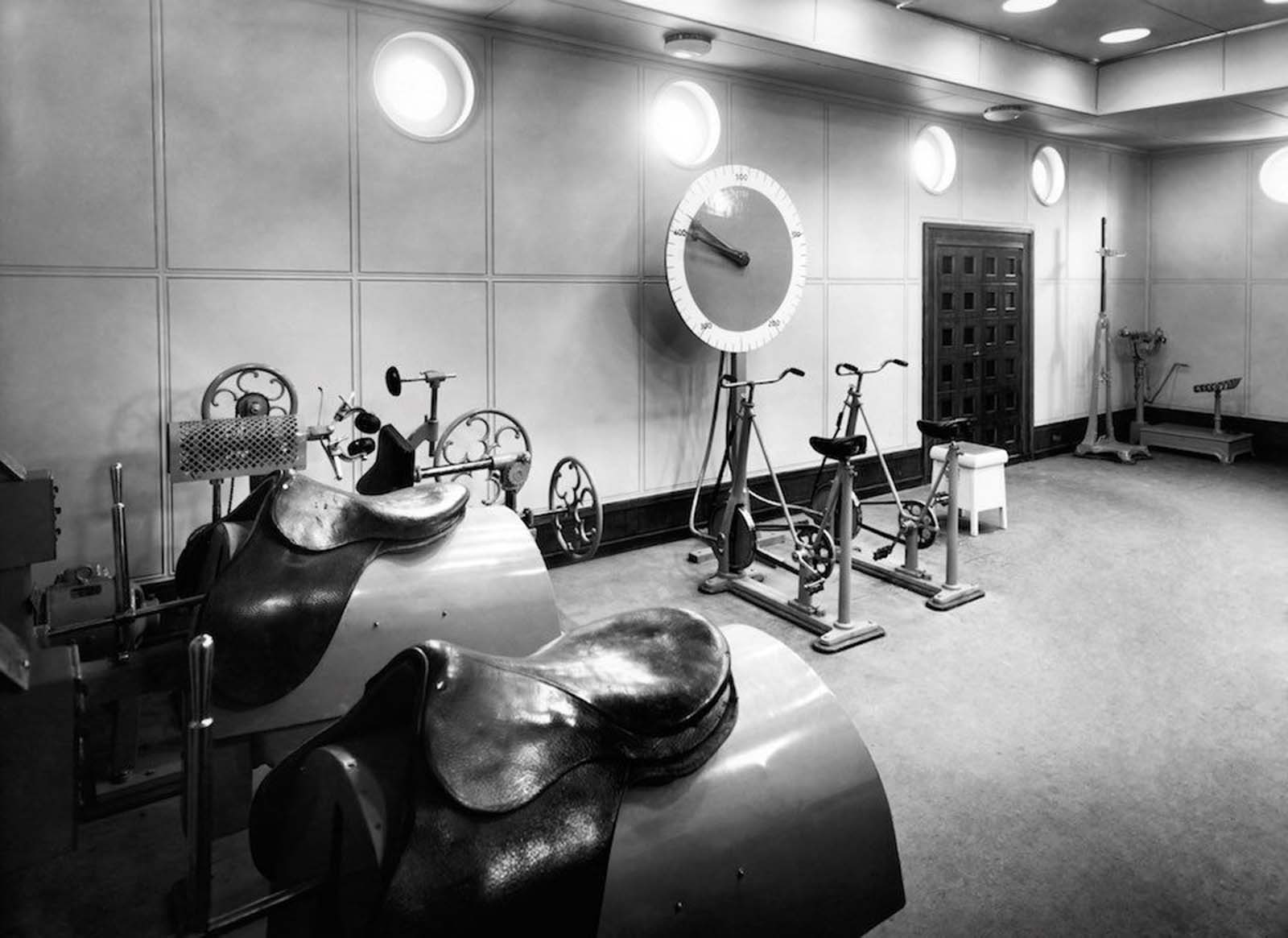 The first class gym on the Liner Vulcania. 1930. 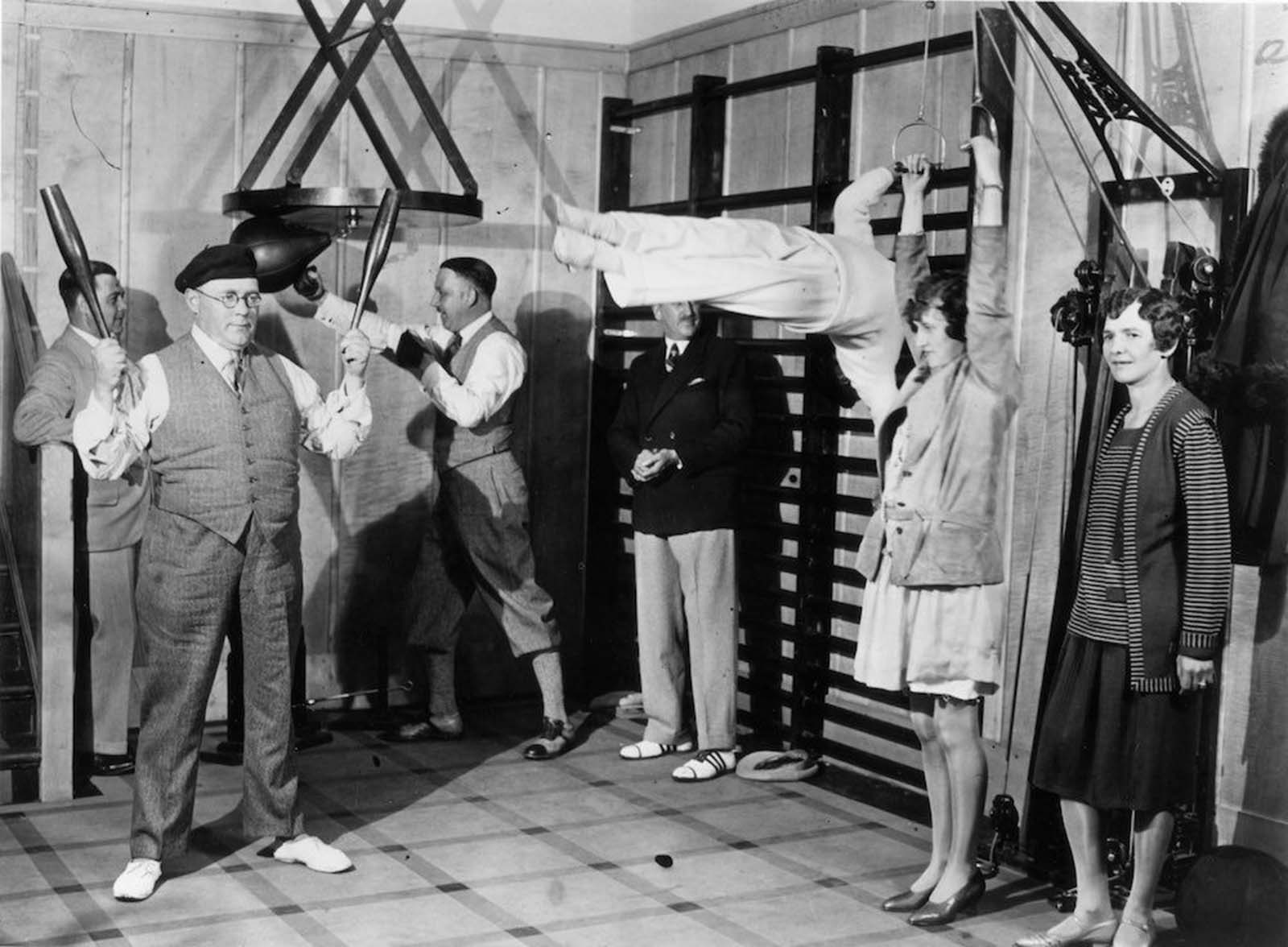 Passengers on the Canadian Pacific liner Duchess of Bedford keep fit in the ship’s gymnasium. Dec, 1931. 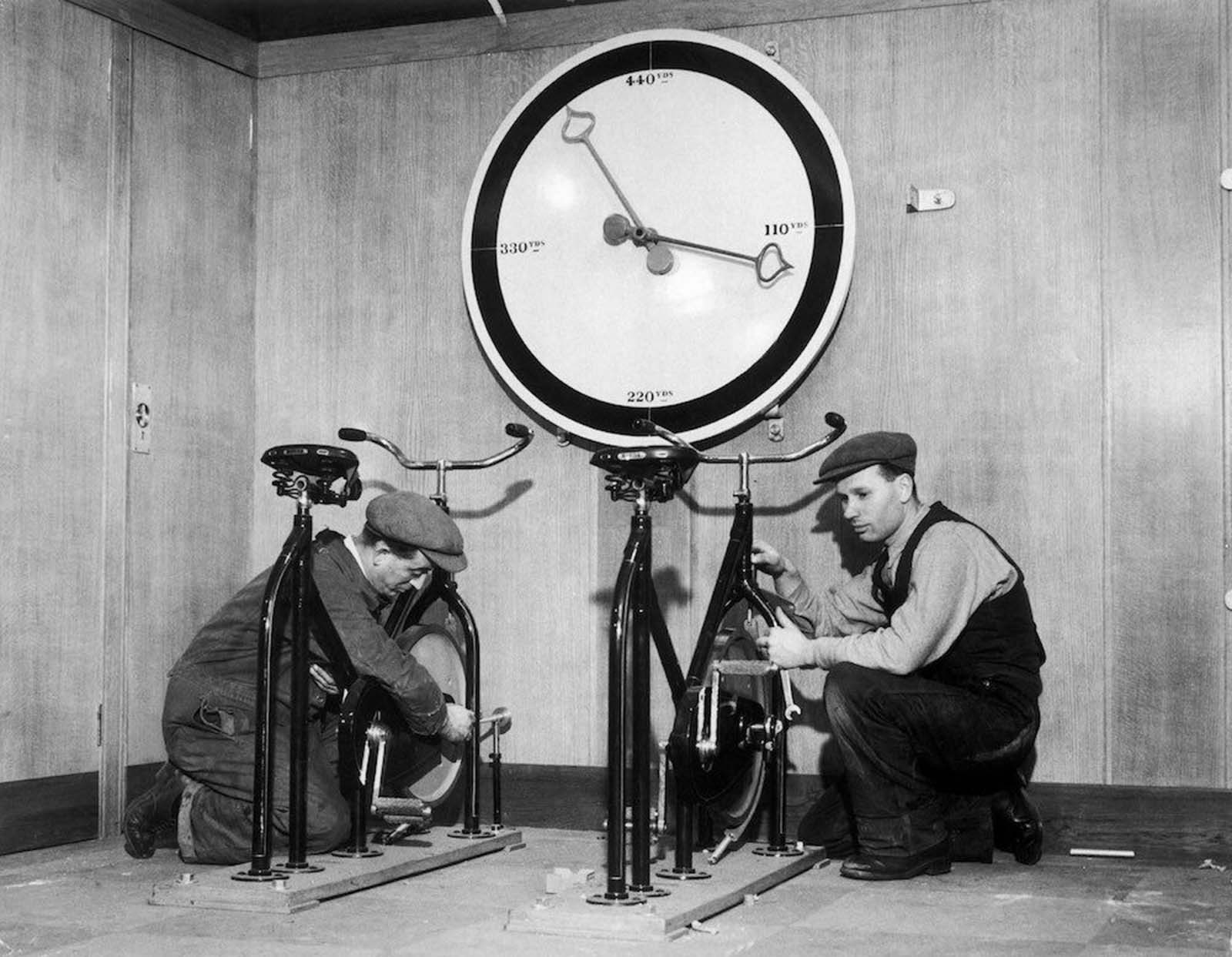 At the time of the installation of the English liner Queen Mary, workmen in the gymnasium of the ship are setting up exercise bikes, with an enormous meter indicating the distance covered. 1932. 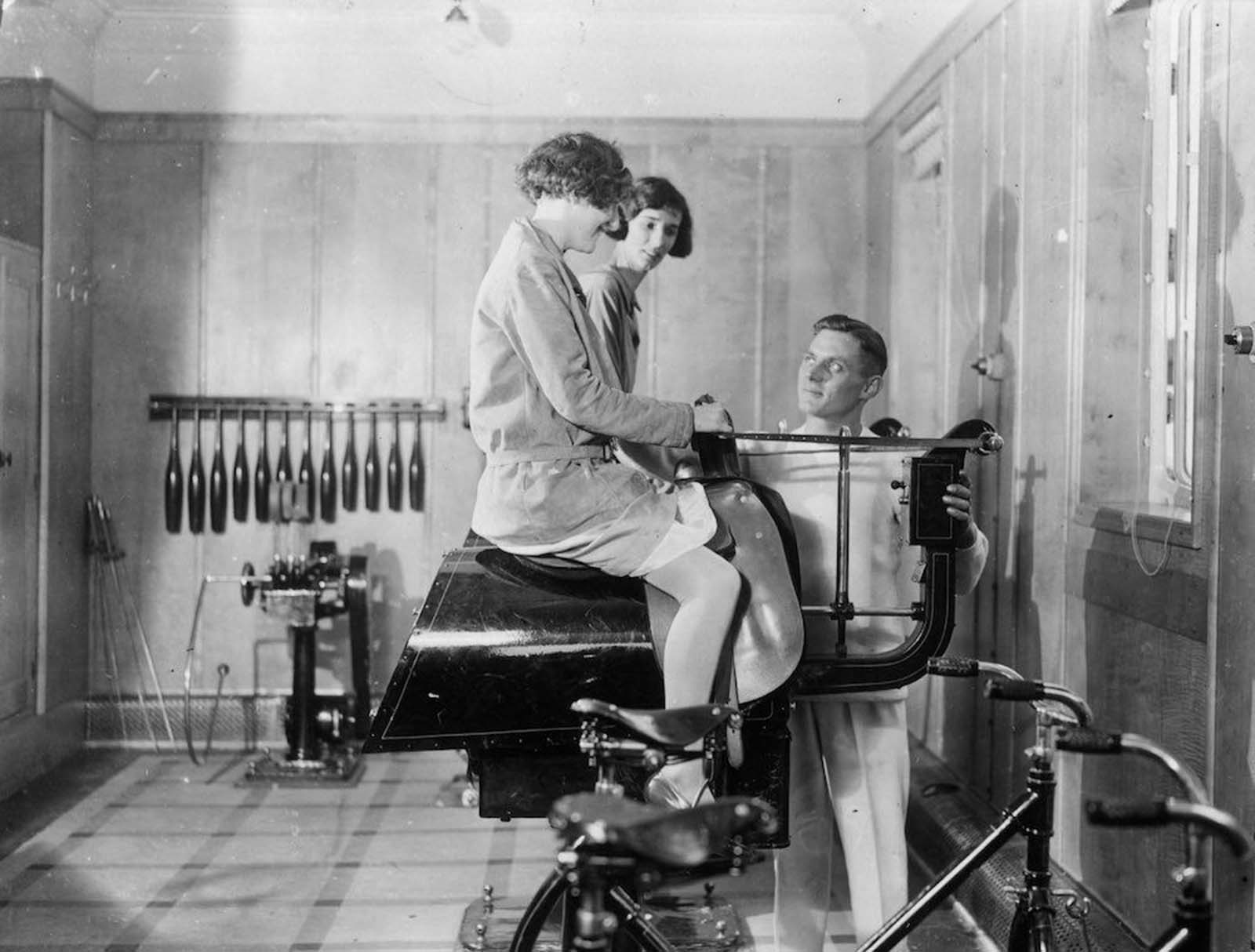 Passengers on the Canadian Pacific liner Duchess of Bedford keep fit in the ship’s gymnasium, with the help of a riding machine. 1931.