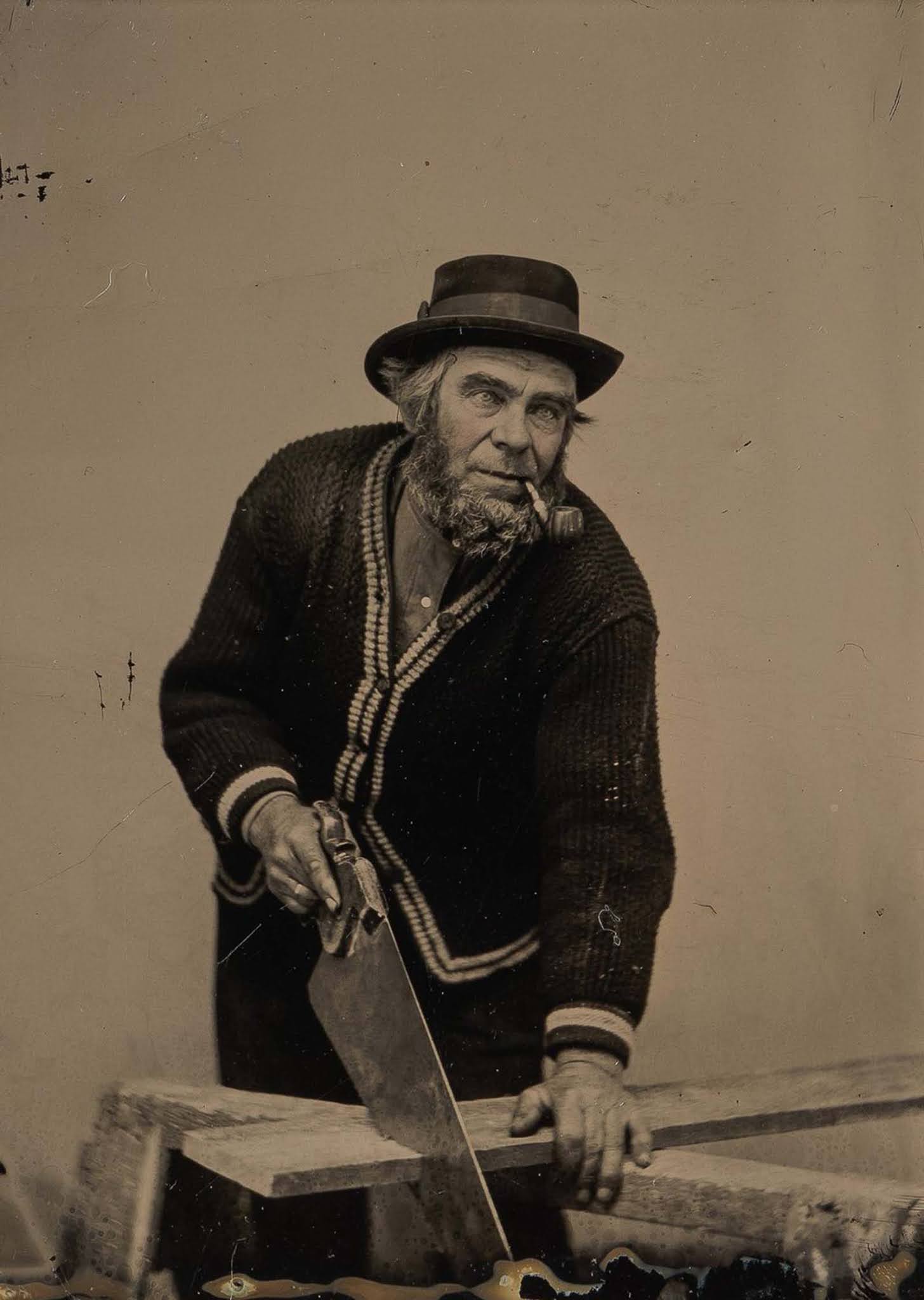 A carpenter saws a plank.

In the mid 19 century, a variety of men had staged pictures of themselves taken at work, from artisans and clowns to engineers and preachers; they chose to have their lives represented by the day-to-day activities of their occupations. Subjects indicated their occupation or trade through the items in hand and the clothes they wore.

The tintype, one of the earliest photographic processes, was often used for portrait photography. The photograph was made by creating a direct positive on a thin sheet of metal coated with a dark lacquer or enamel and used as the support for the photographic emulsion.

Tintype portraits were at first usually made in a formal photographic studio, like daguerreotypes and other early types of photographs, but later they were most commonly made by photographers working in booths or the open air at fairs and carnivals, as well as by itinerant sidewalk photographers.

Because the lacquered iron support (there is no actual tin used) was resilient and did not need drying, a tintype could be developed and fixed and handed to the customer only a few minutes after the picture had been taken. 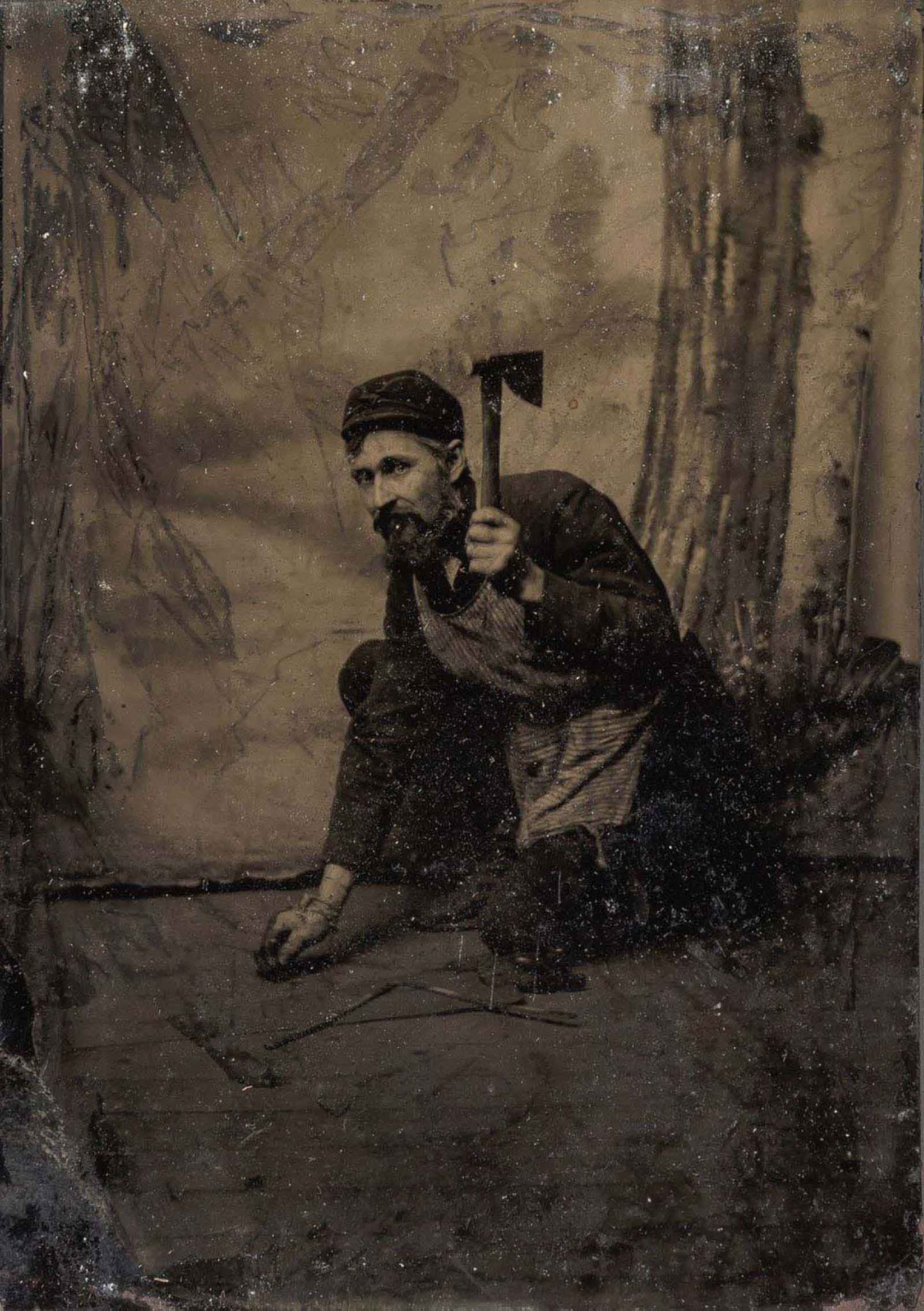 A carpenter poses with a hammer and nail.

In other words, the tintype was a cheap, fast, easy-to-make, practically indestructible type of photograph that became enormously popular among the working class.

For common laborers and their families, the opportunity to join the ranks of those who owned pictures of family and friends, the upper classes, was momentous.

The subjects of the portrait photographs collected in this article are plumbers proudly holding their wrenches and pipe cutters, carpenters with their saws and lathing hatchets, textile workers with their spindles and yarn, icemen with their tongs.

These people lived and worked at a time when a depersonalized factory system run by production and efficiency experts was beginning to dominate the American industry and culture.

Many of the men and women in these tintypes were part of a disappearing class of self-employed artisans and journeymen; their portraits proudly stress their individuality and the essential nobility of their work.

The tintype began losing artistic and commercial ground to higher quality albumen prints on paper in the mid-1860s, yet survived for over another 40 years, living mostly as a carnival novelty. 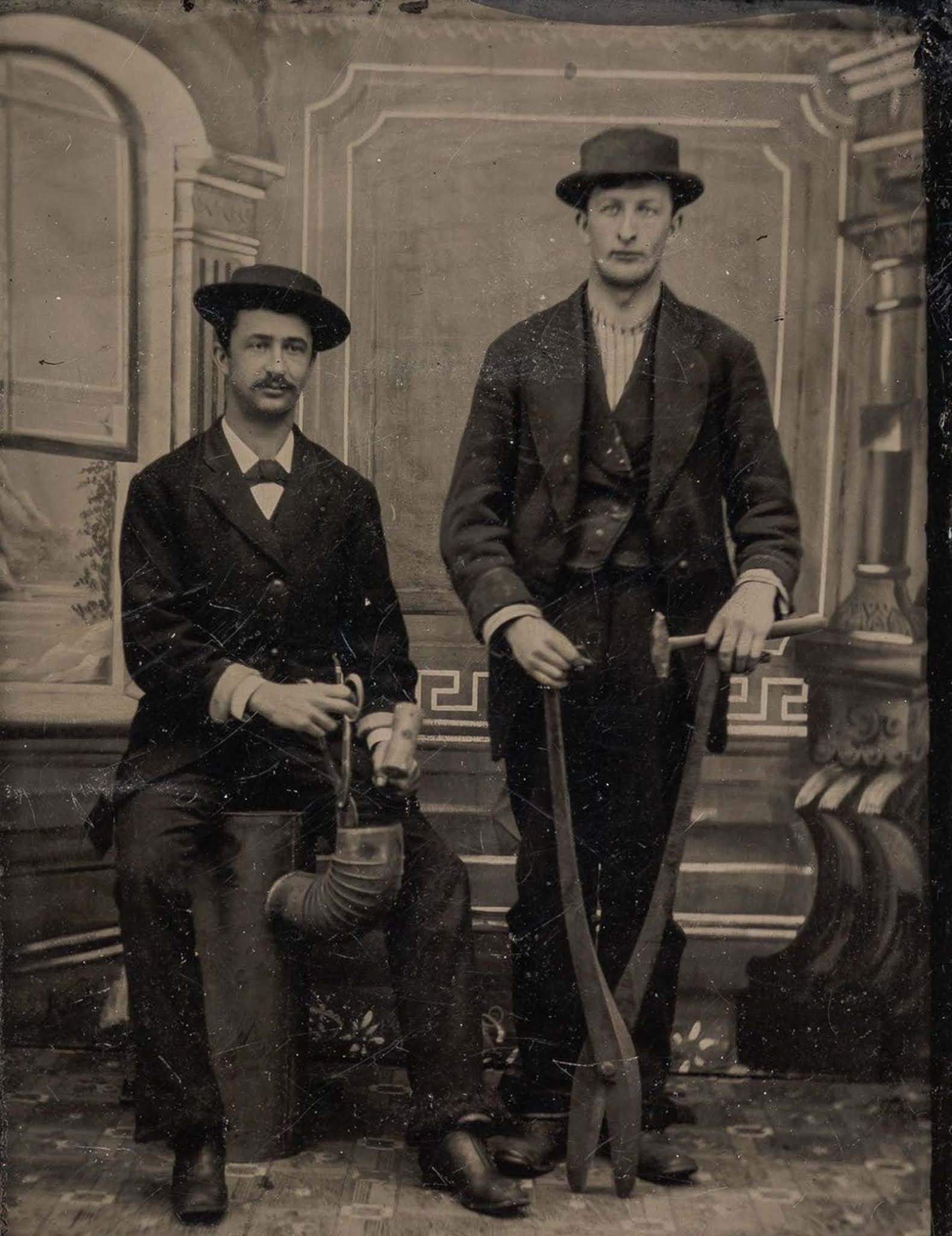 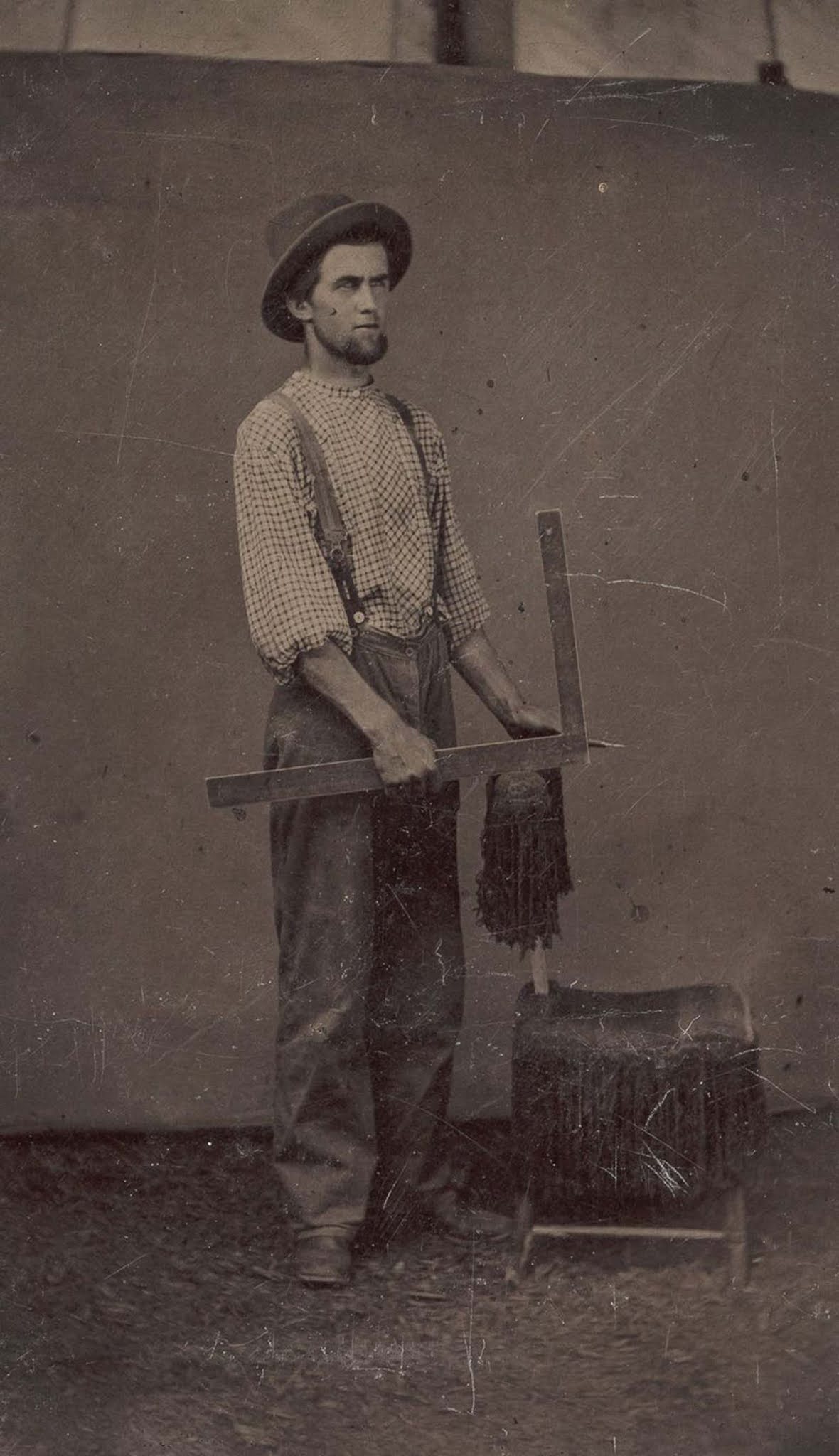 A carpenter with a square. 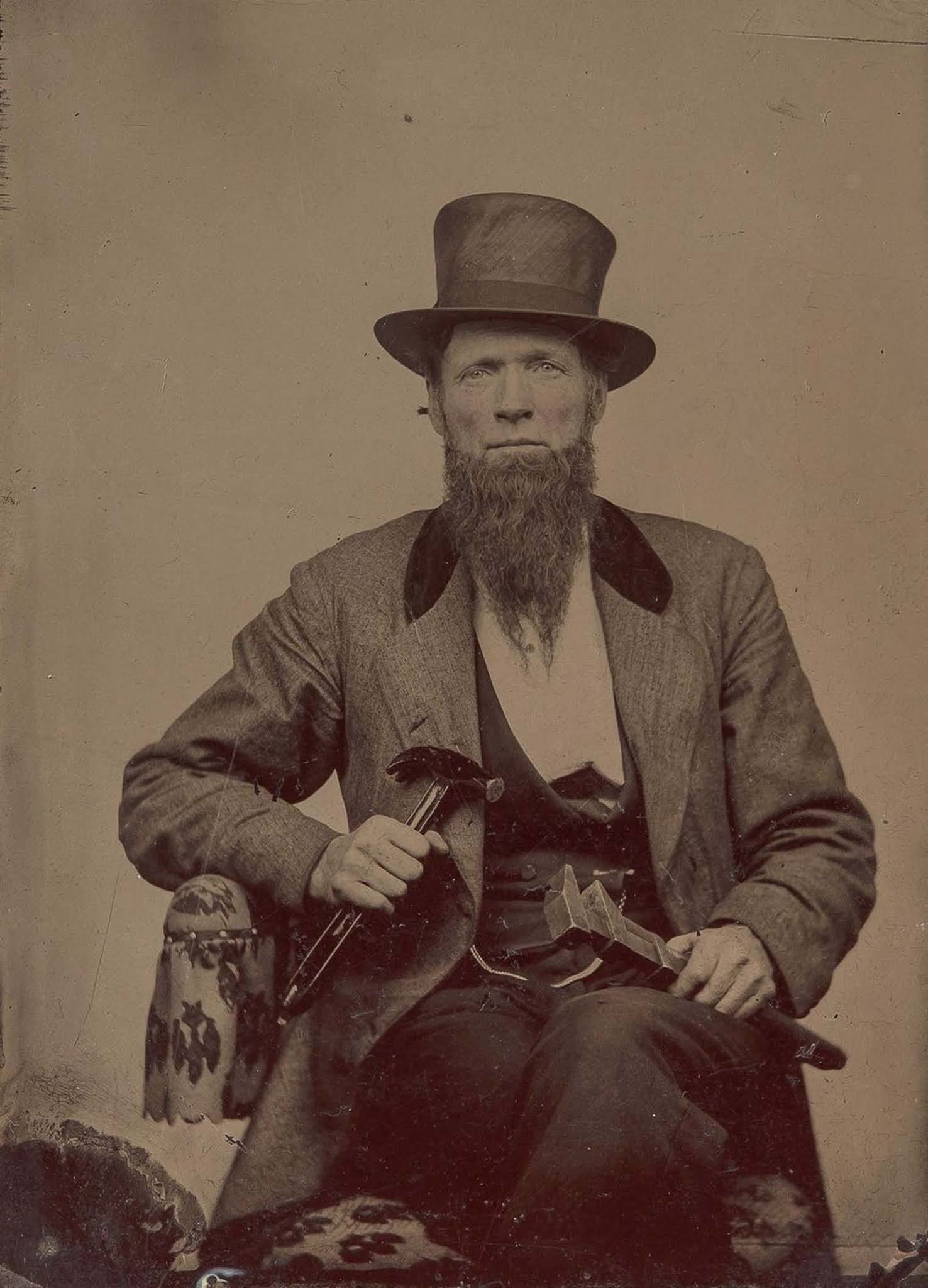 A man holding a hammer and wrench. 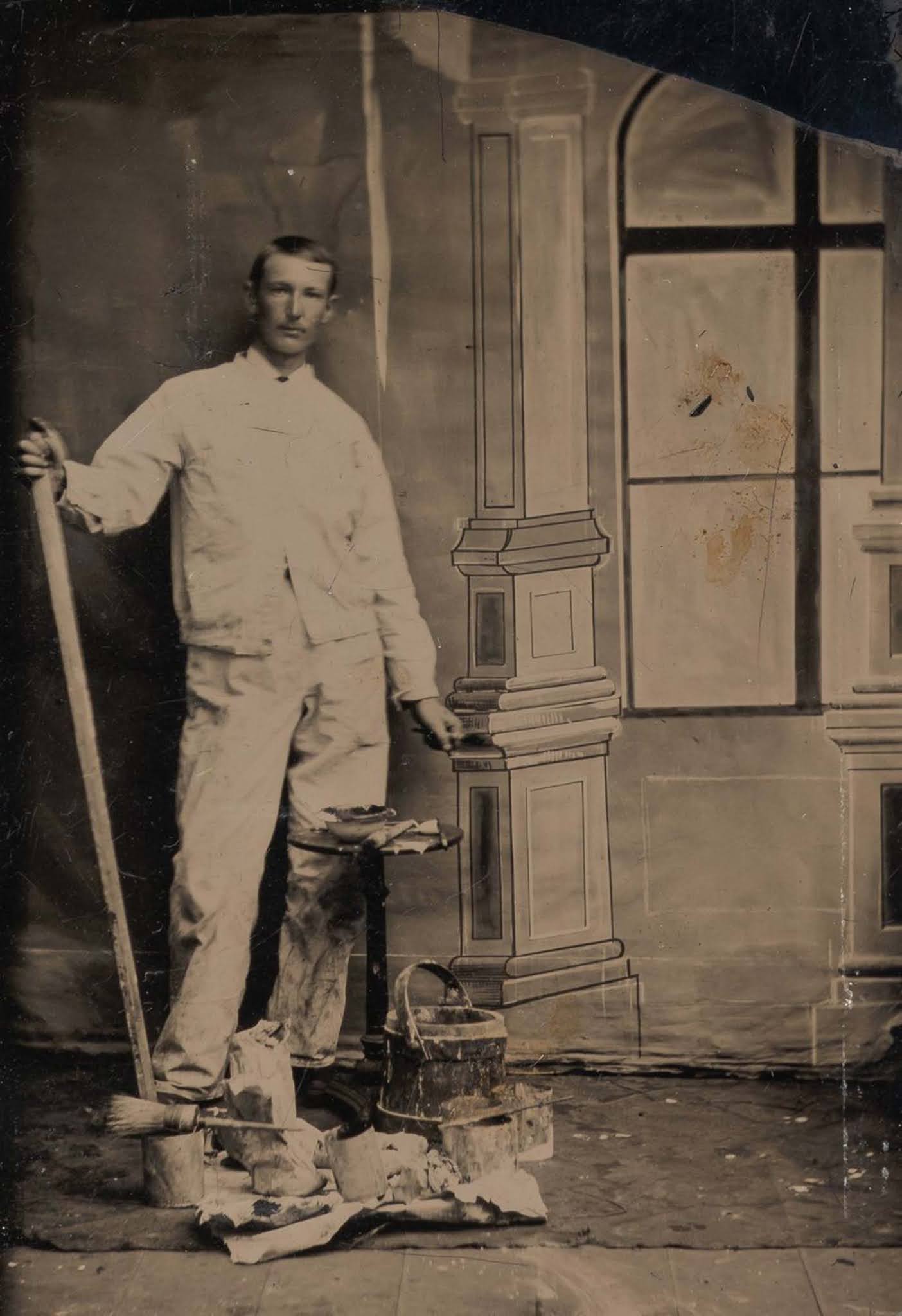 A painter with brushes and paints. 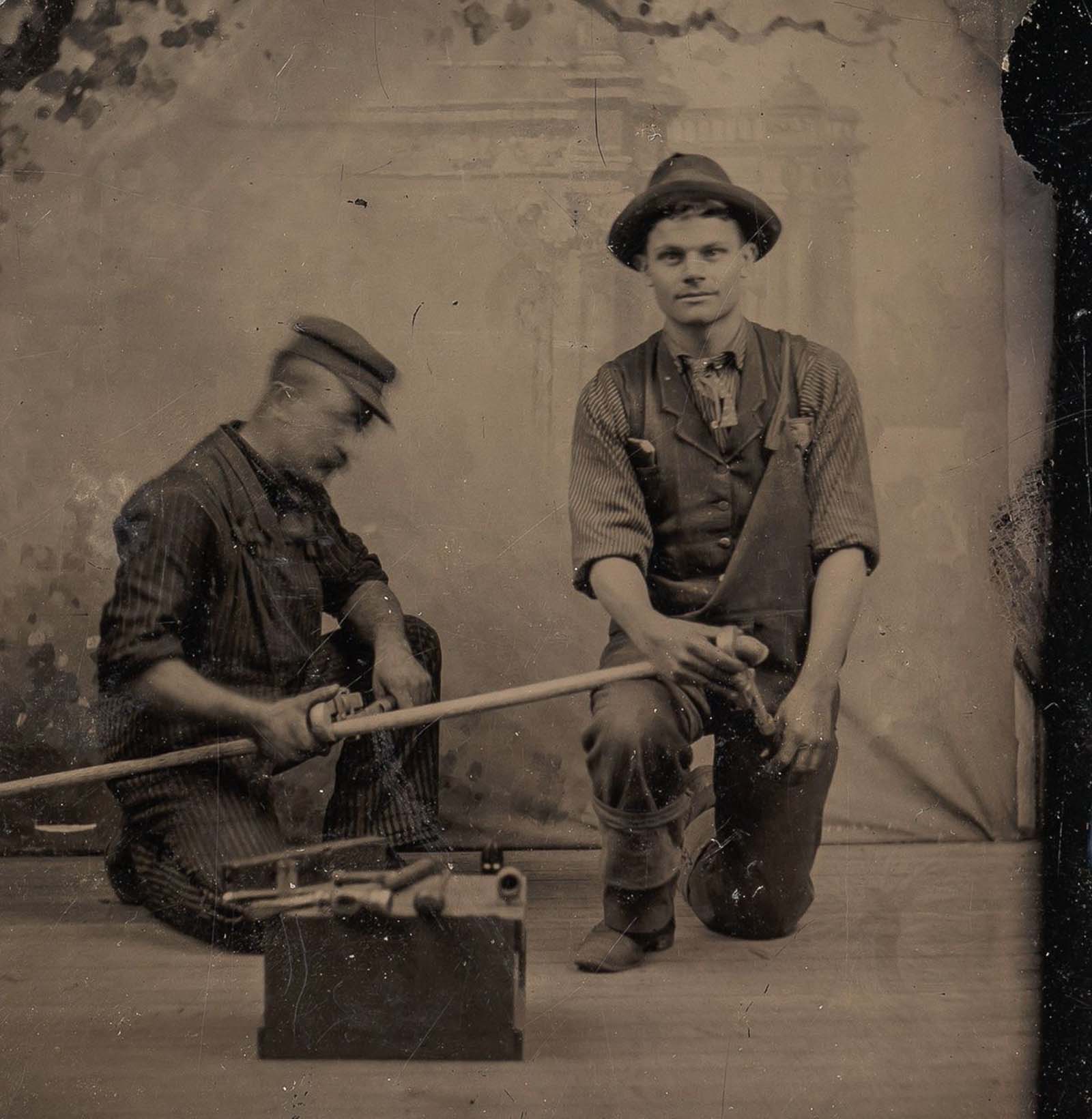 Two plumbers working on a pipe. 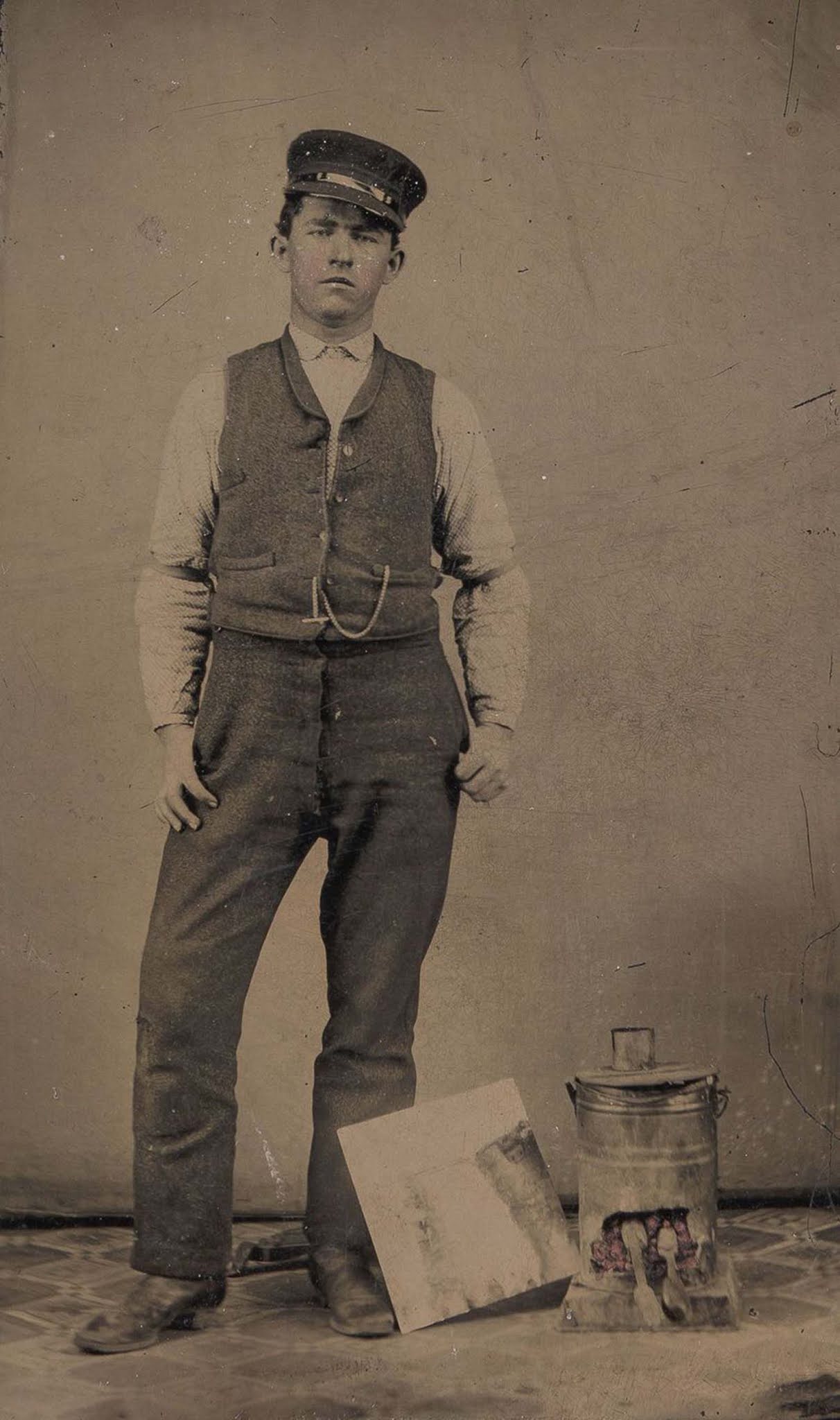 A tinsmith with a coal heater and sheet of tin. 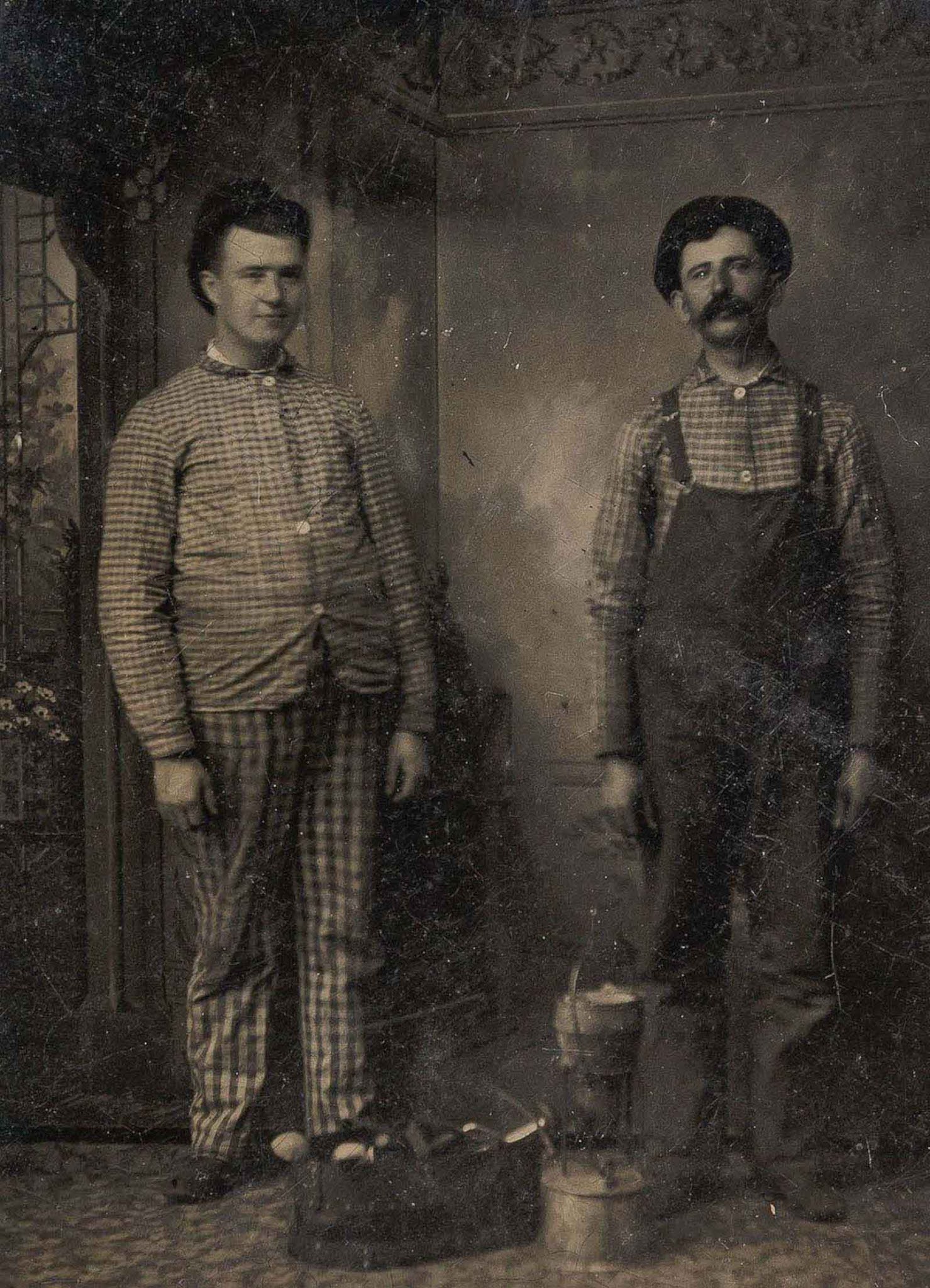 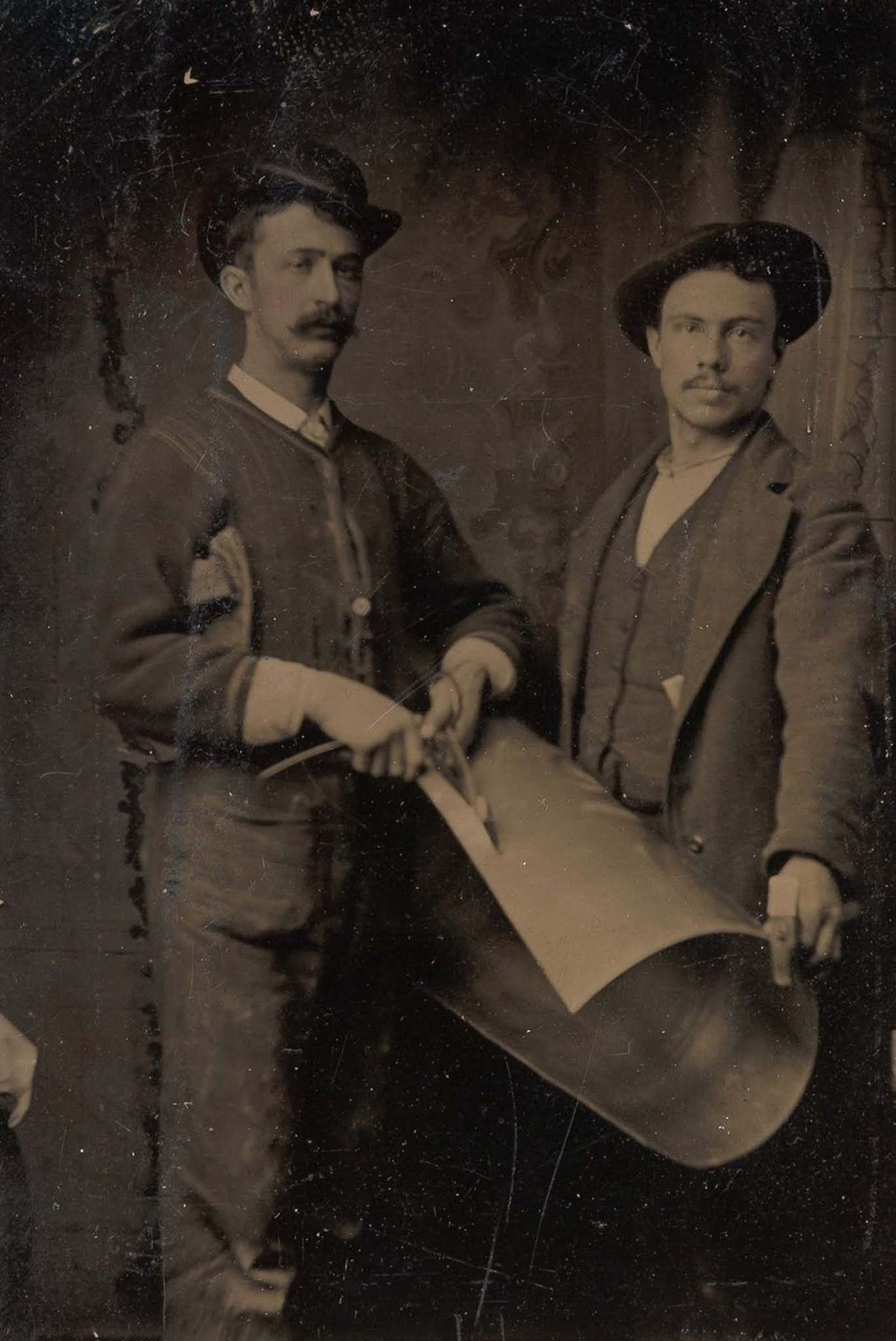 Tinsmiths cutting a sheet of metal. 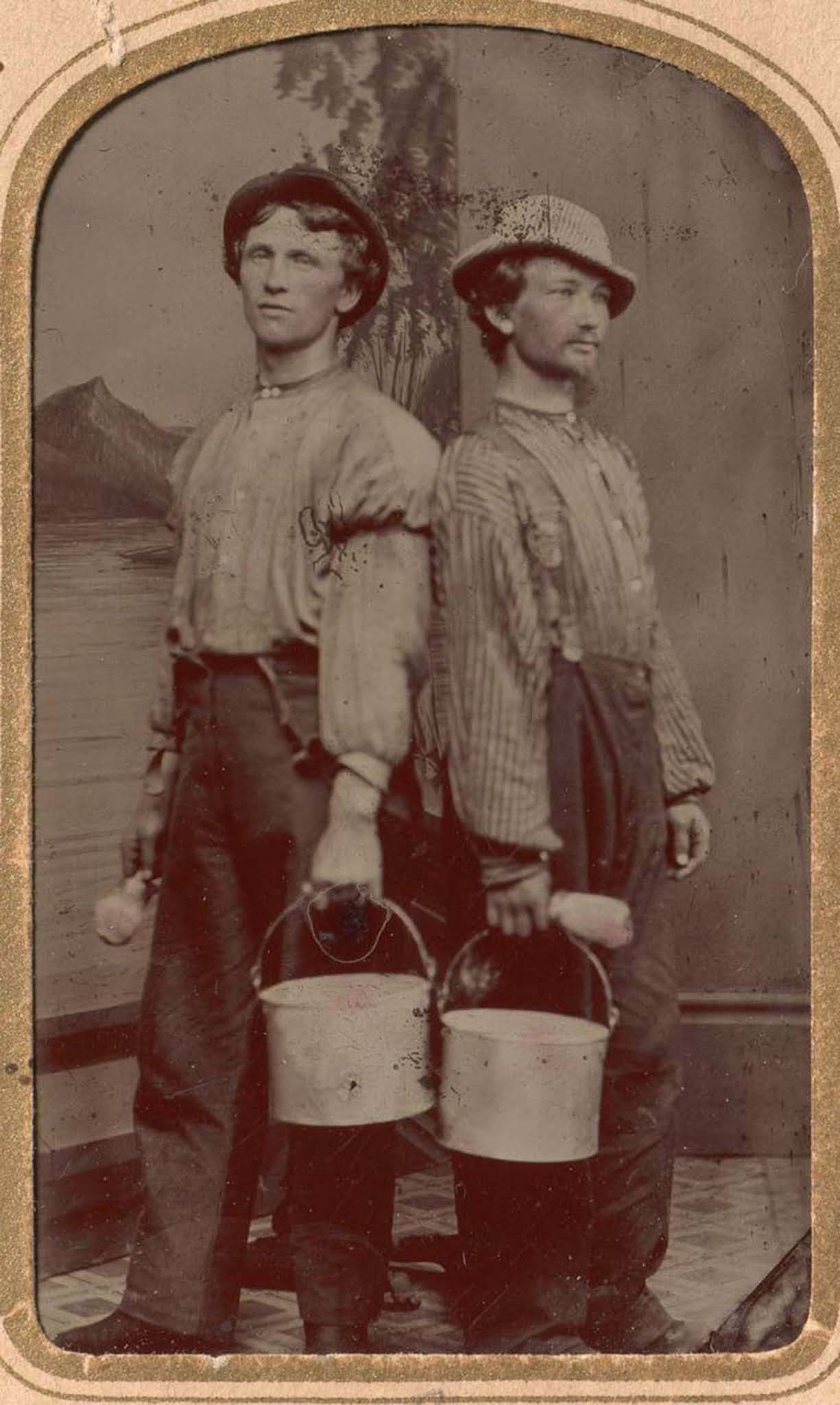 Painters with brushes and buckets. 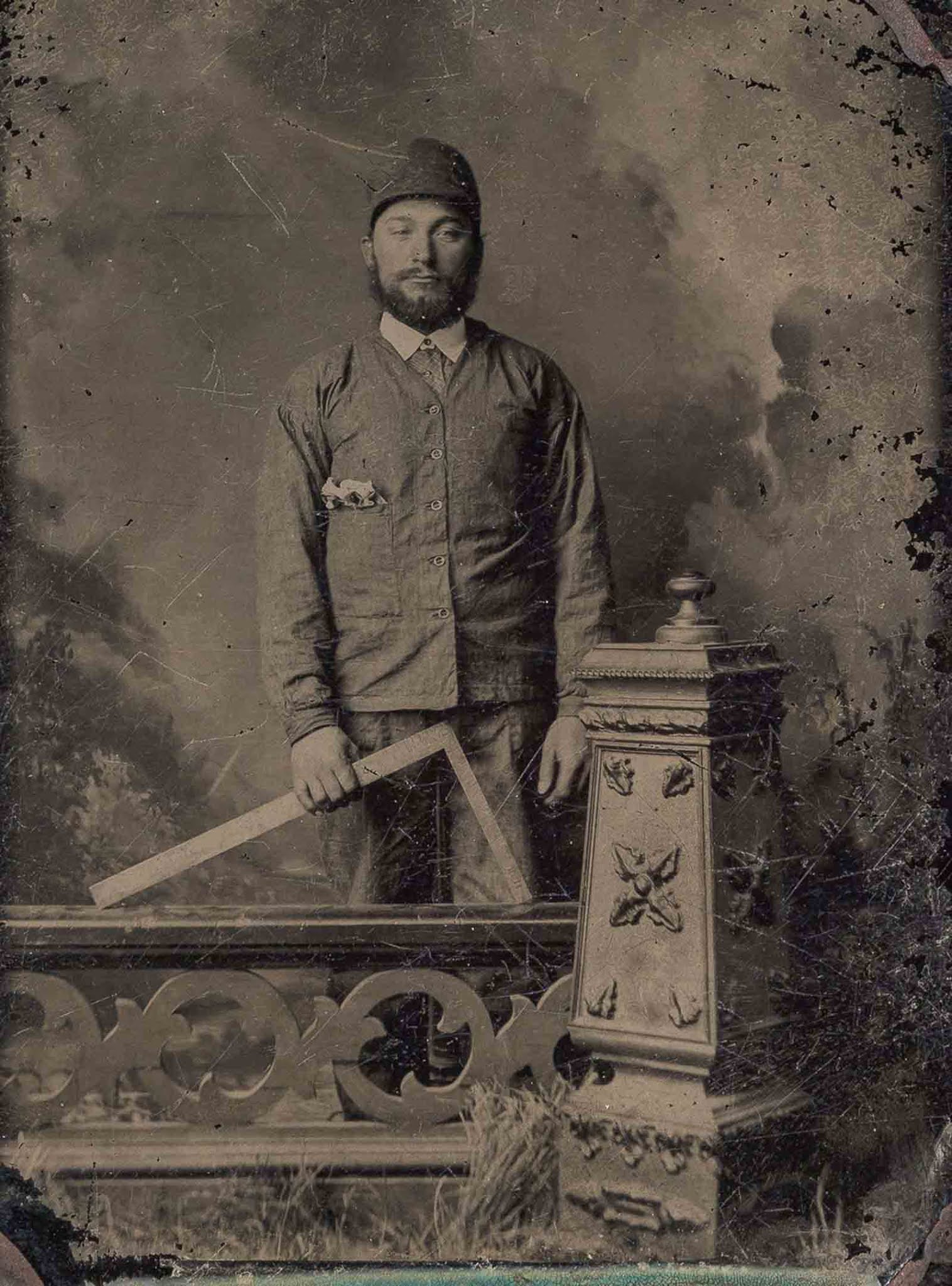 A carpenter with a square and ornate balustrade. 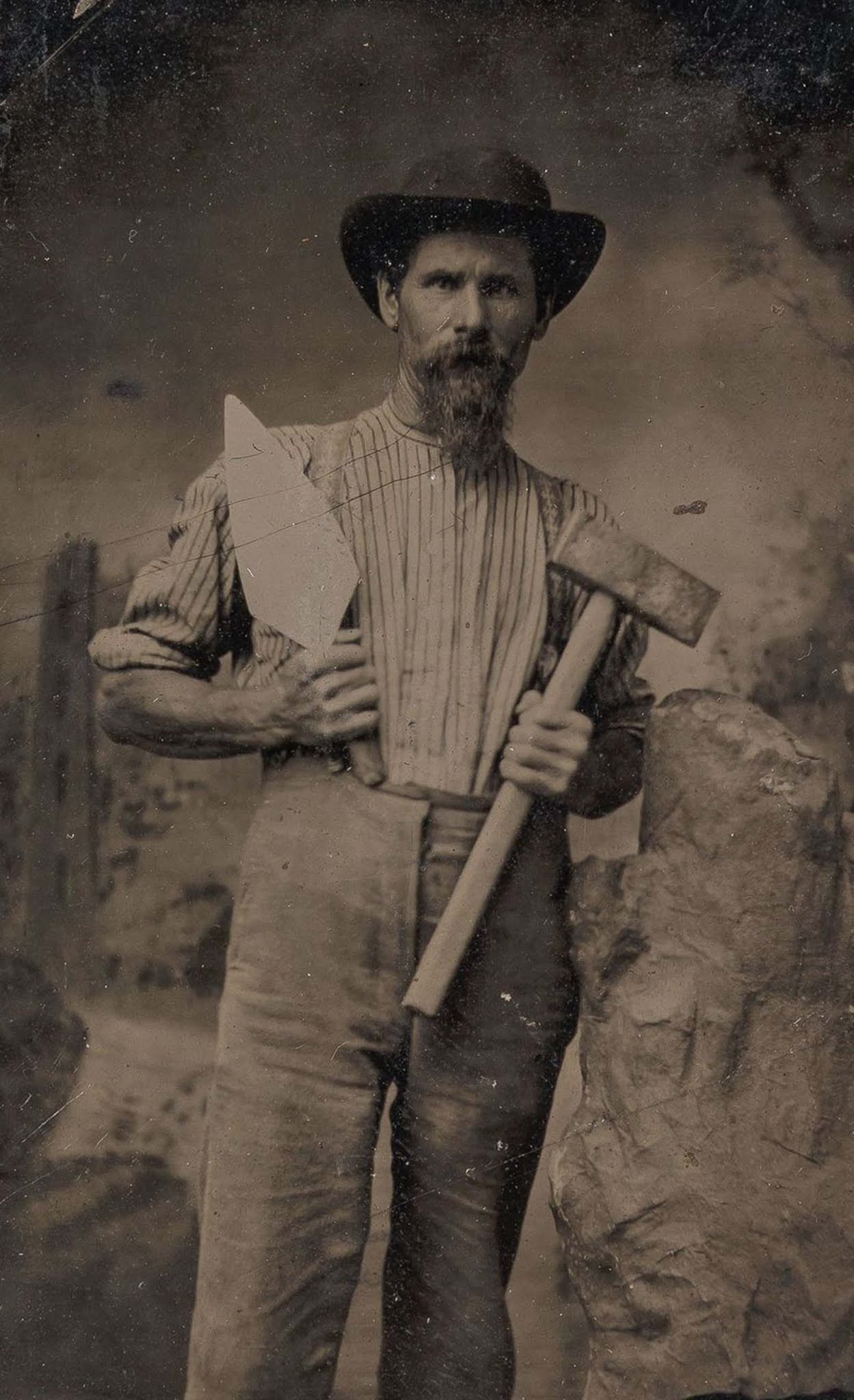 A mason with a trowel and sledgehammer. 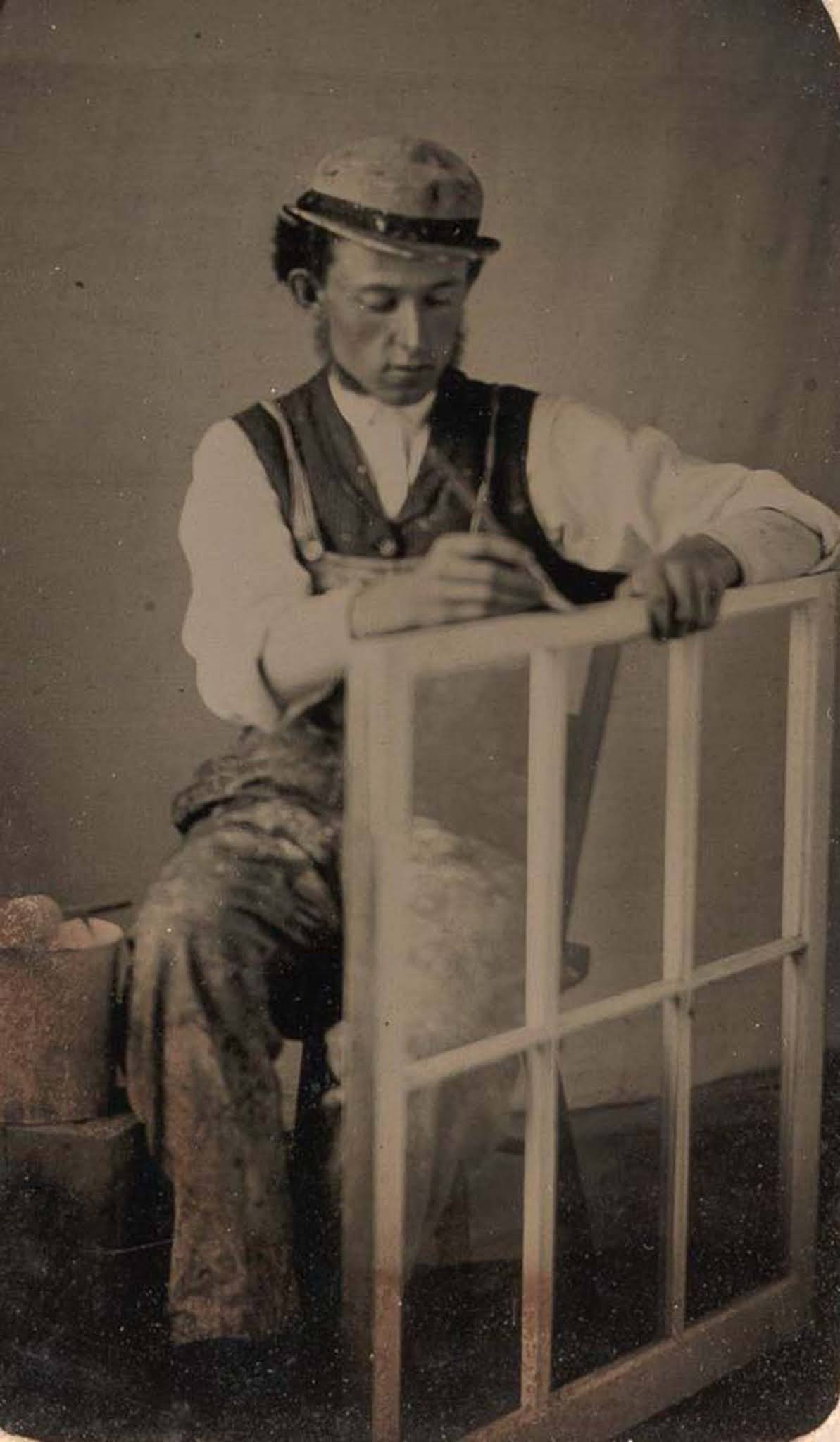 A painter painting a window frame. 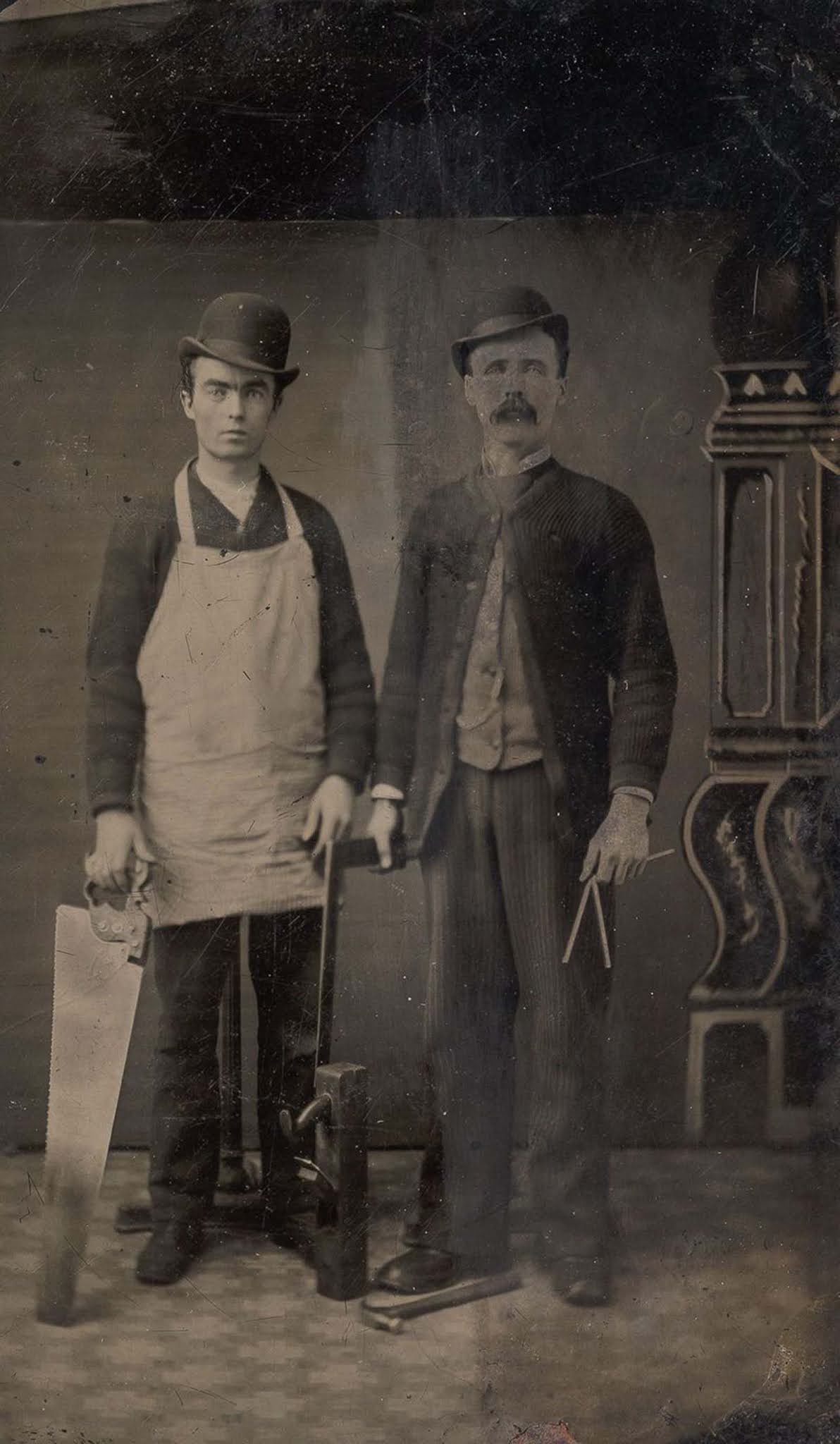 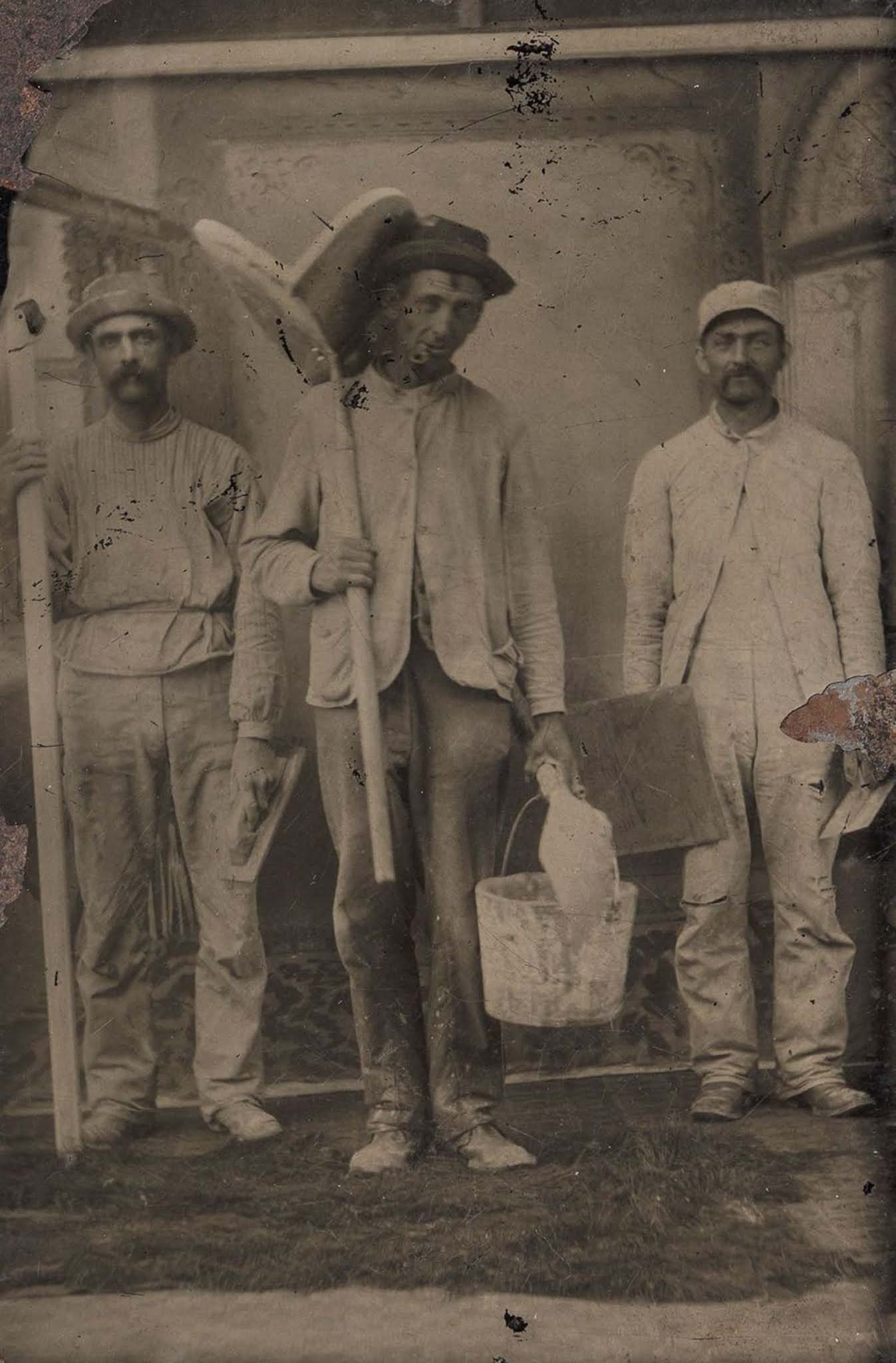 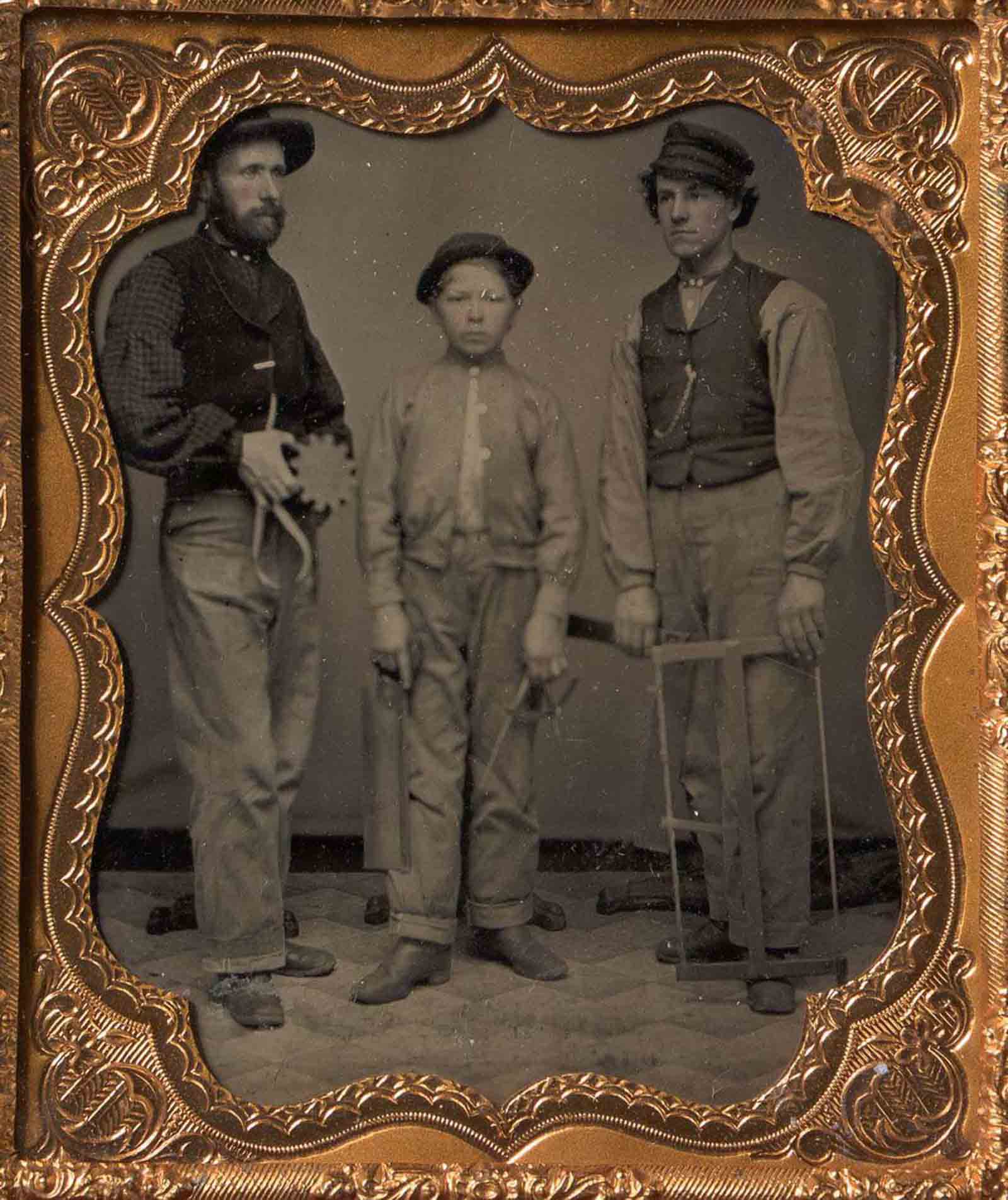 Two men and a boy with saws and calipers. 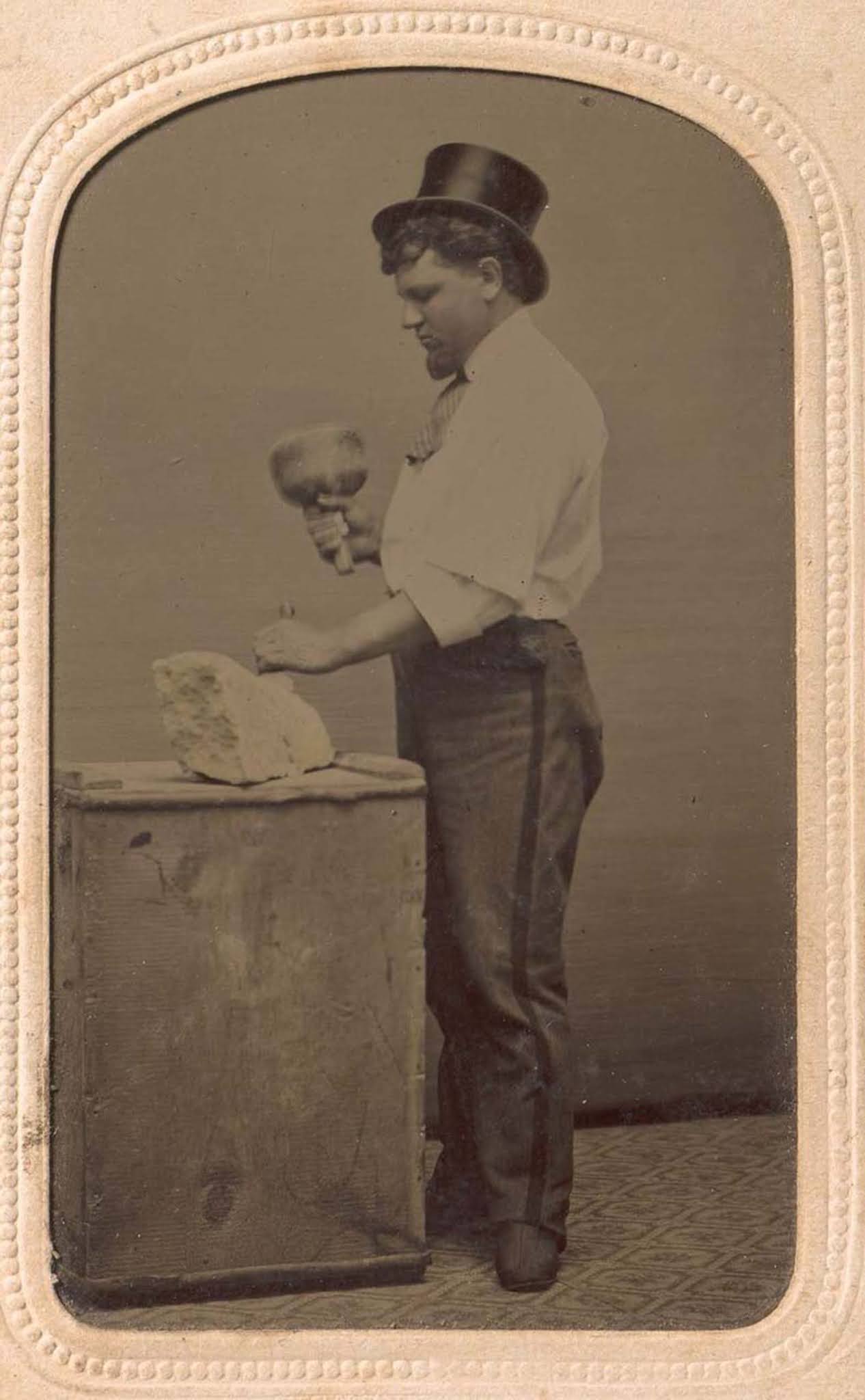 A mason with a chisel and mallet. 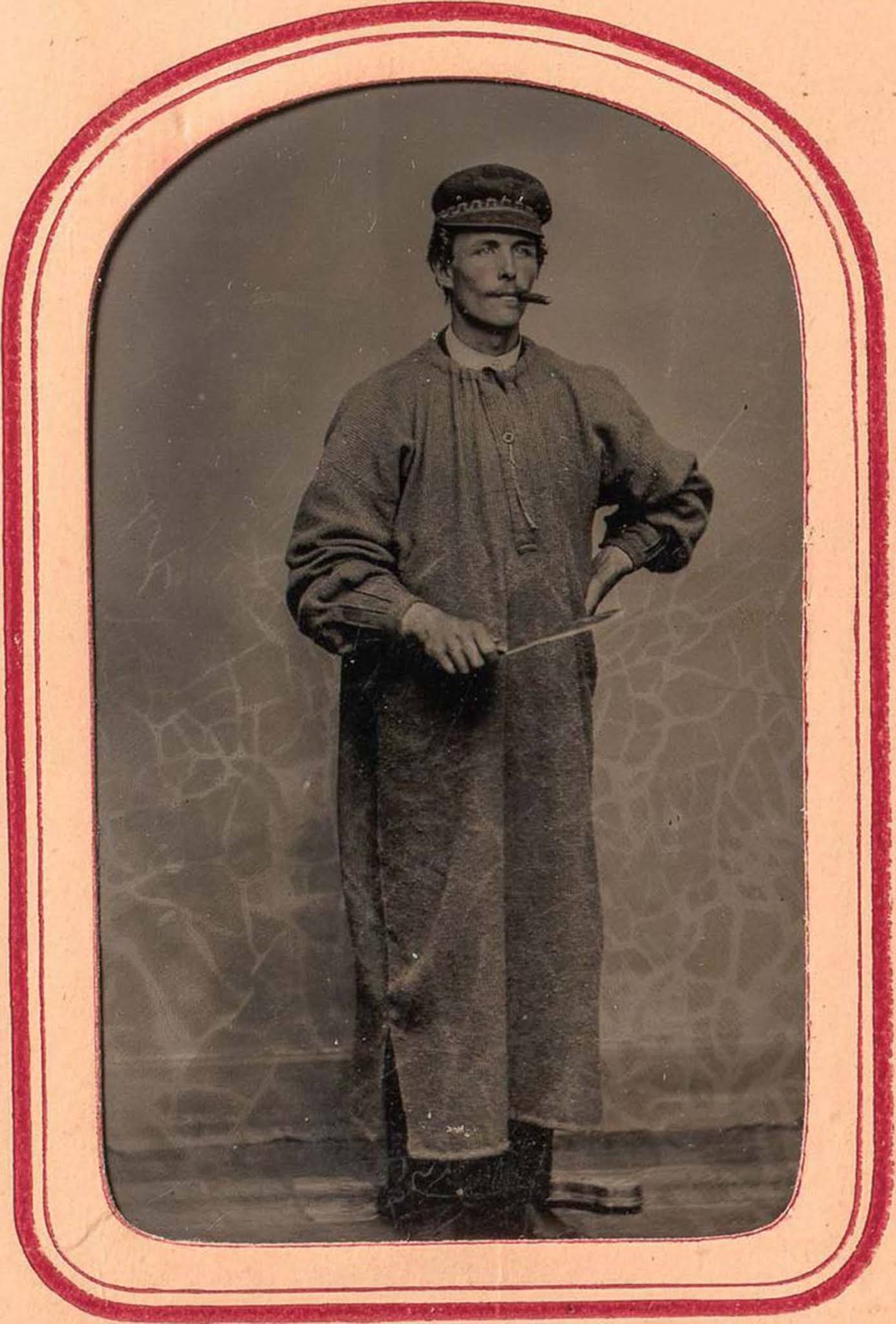 A cigar-smoking plasterer with a trowel. A stonecutter with a child. 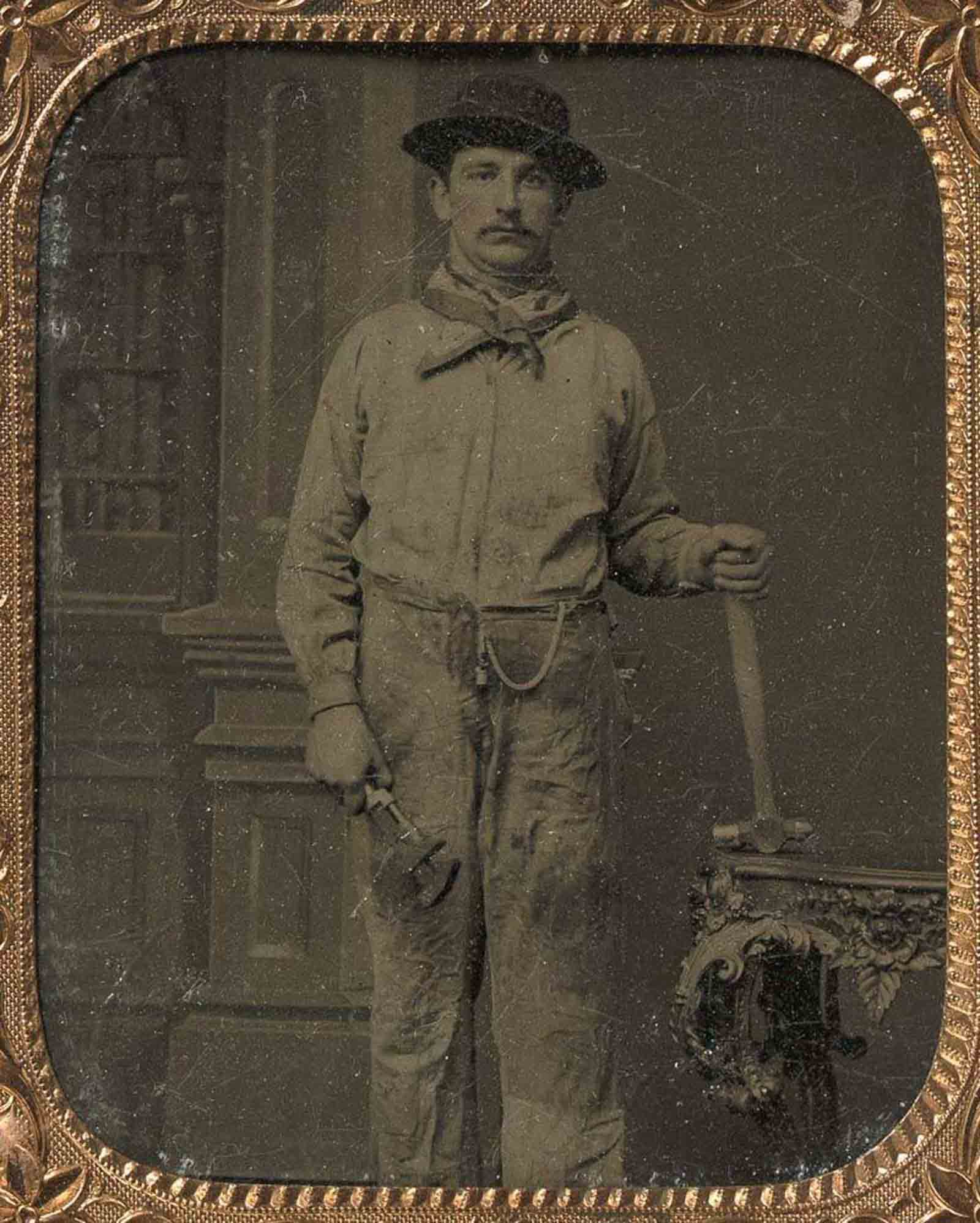 A workman with a hammer and wrench. 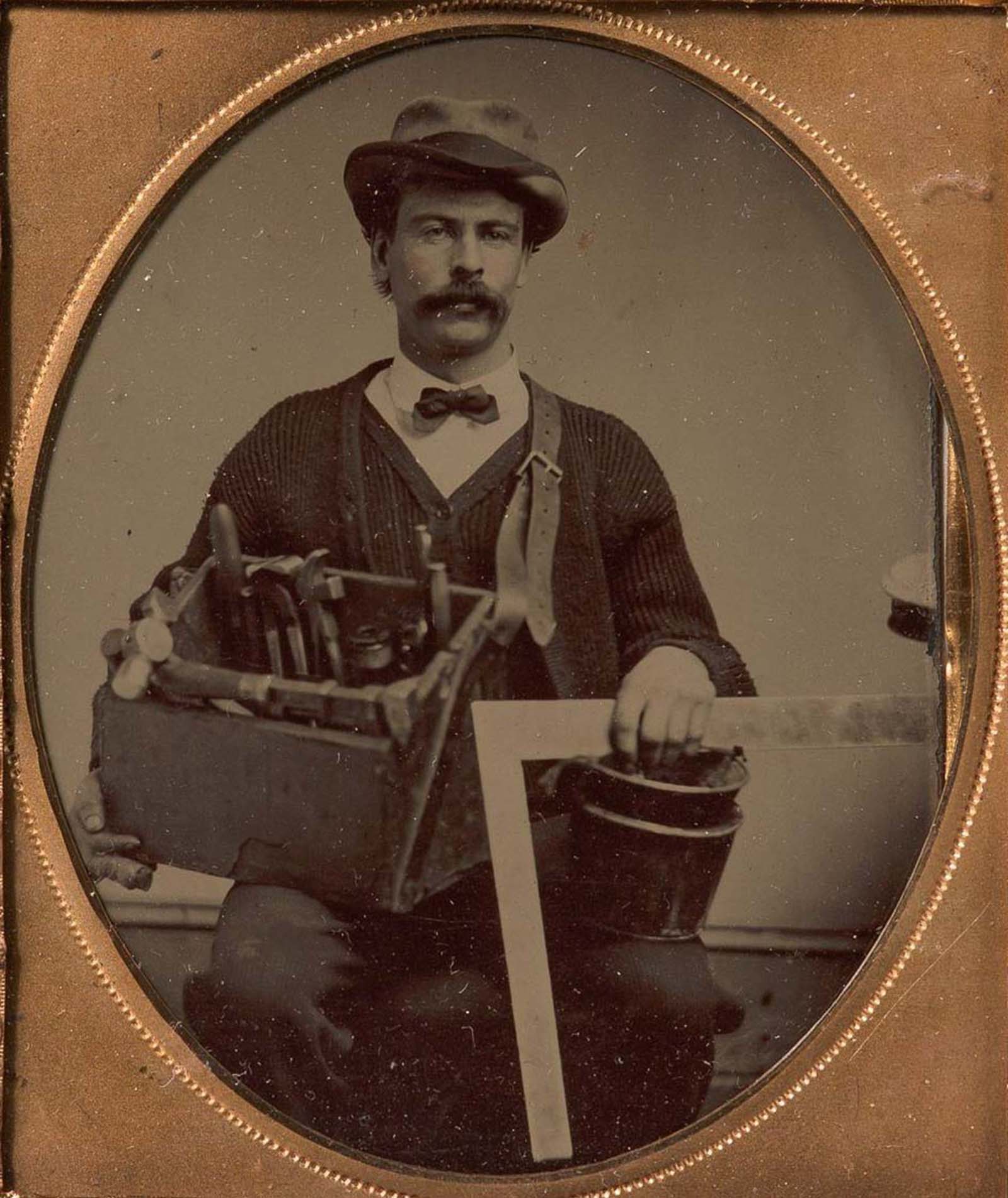 A carpenter with a toolbox and square. 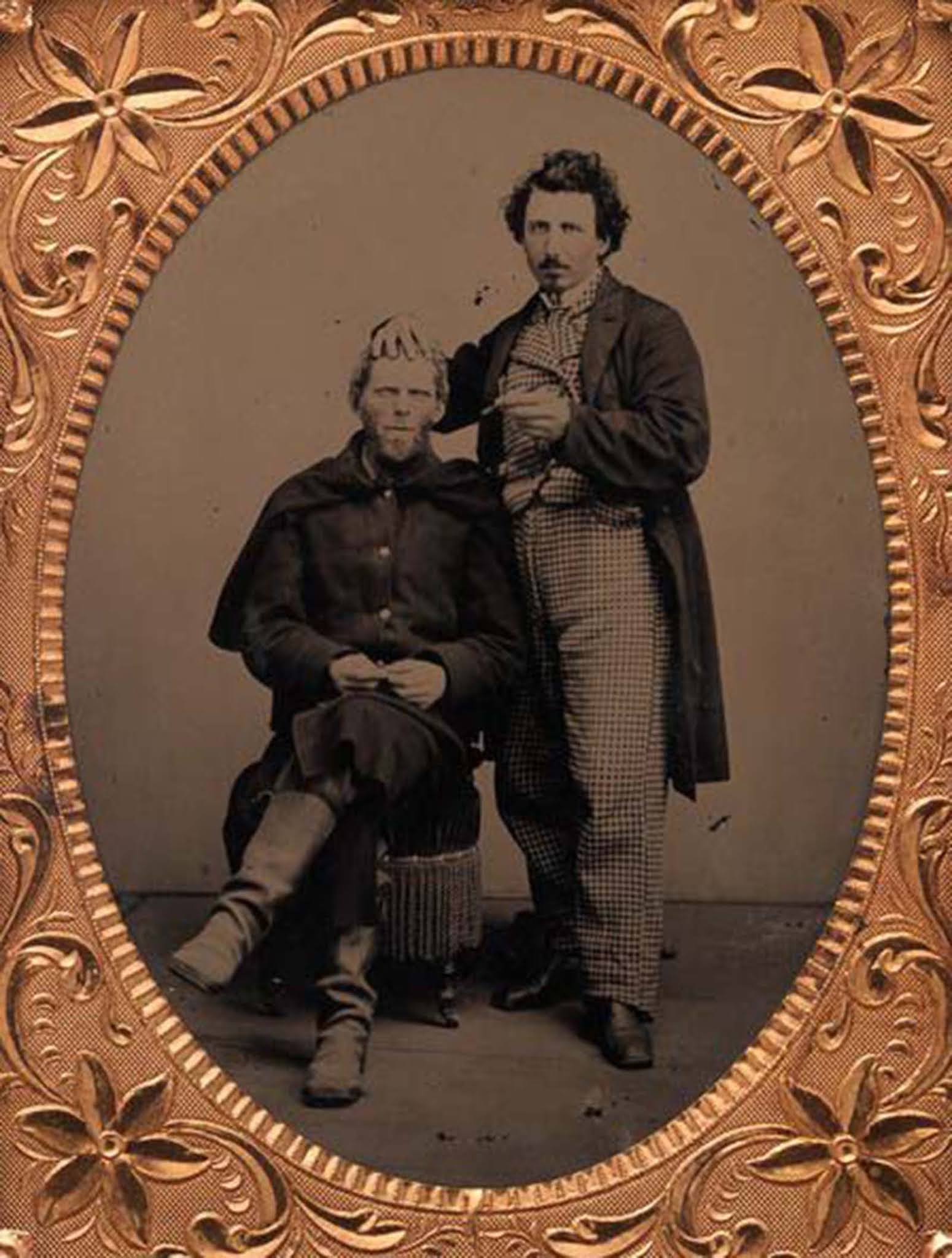 A barber with a Union soldier customer. 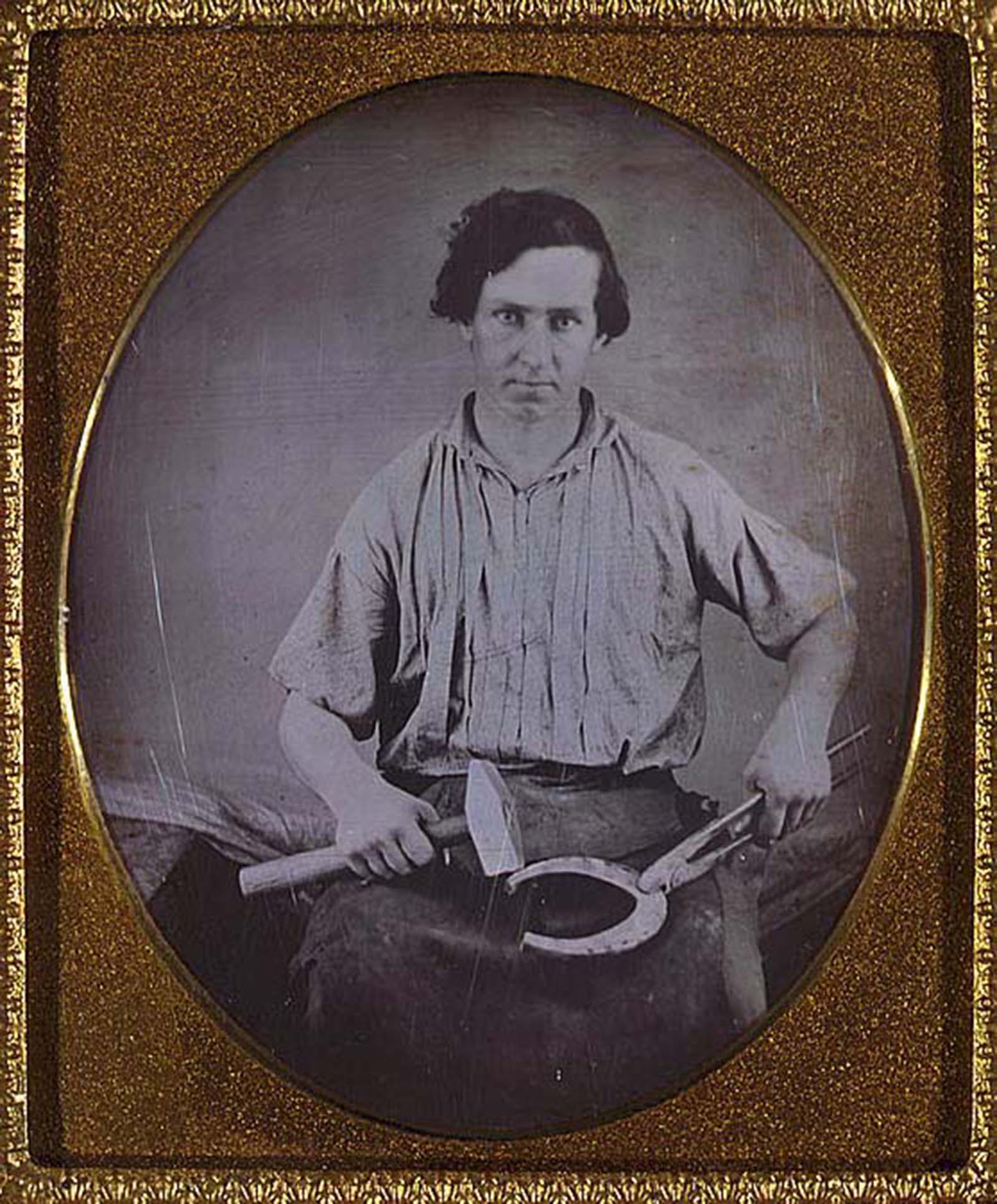 A blacksmith holding a horseshoe with pliers in one hand, and a hammer in the other. 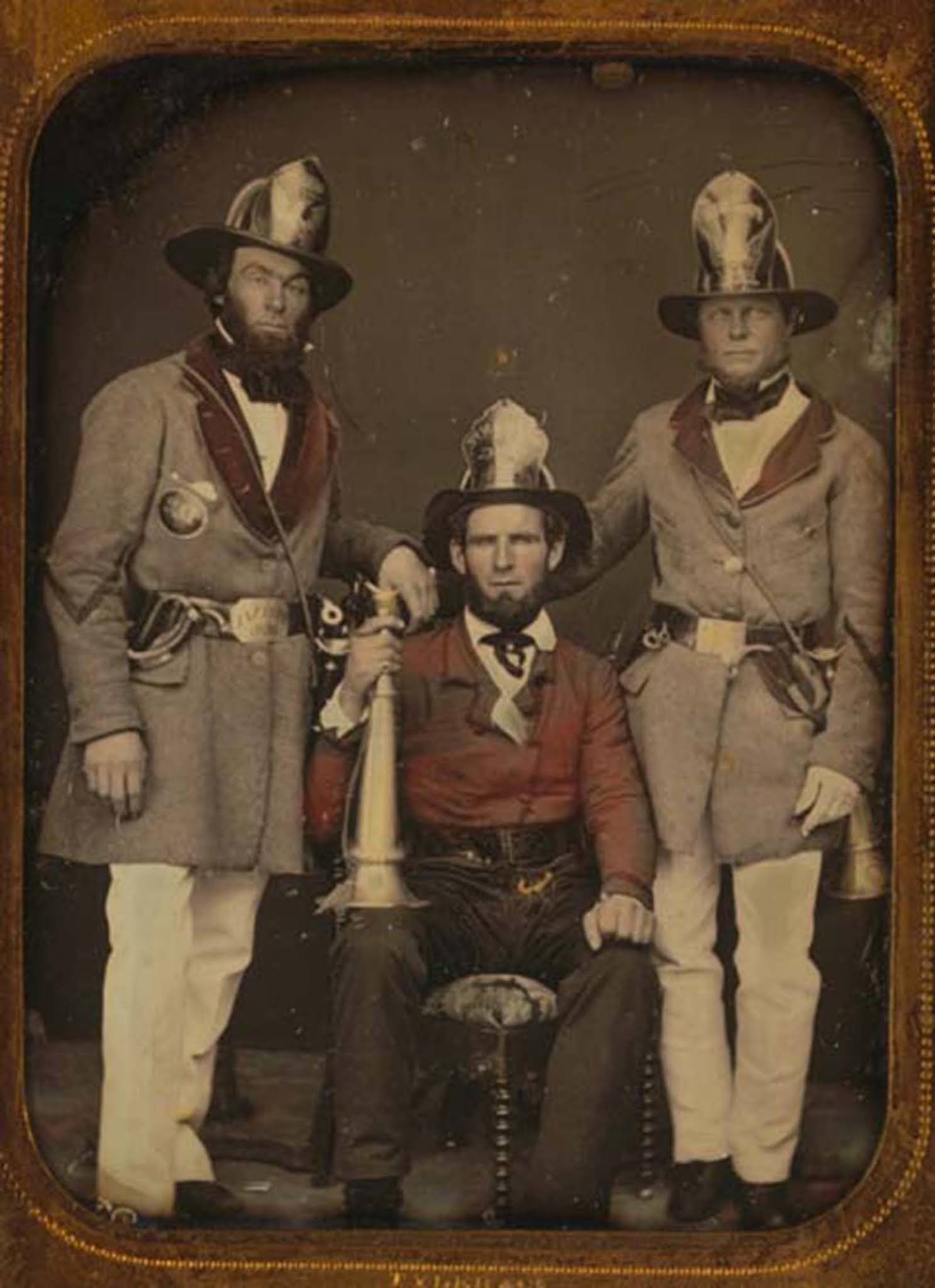 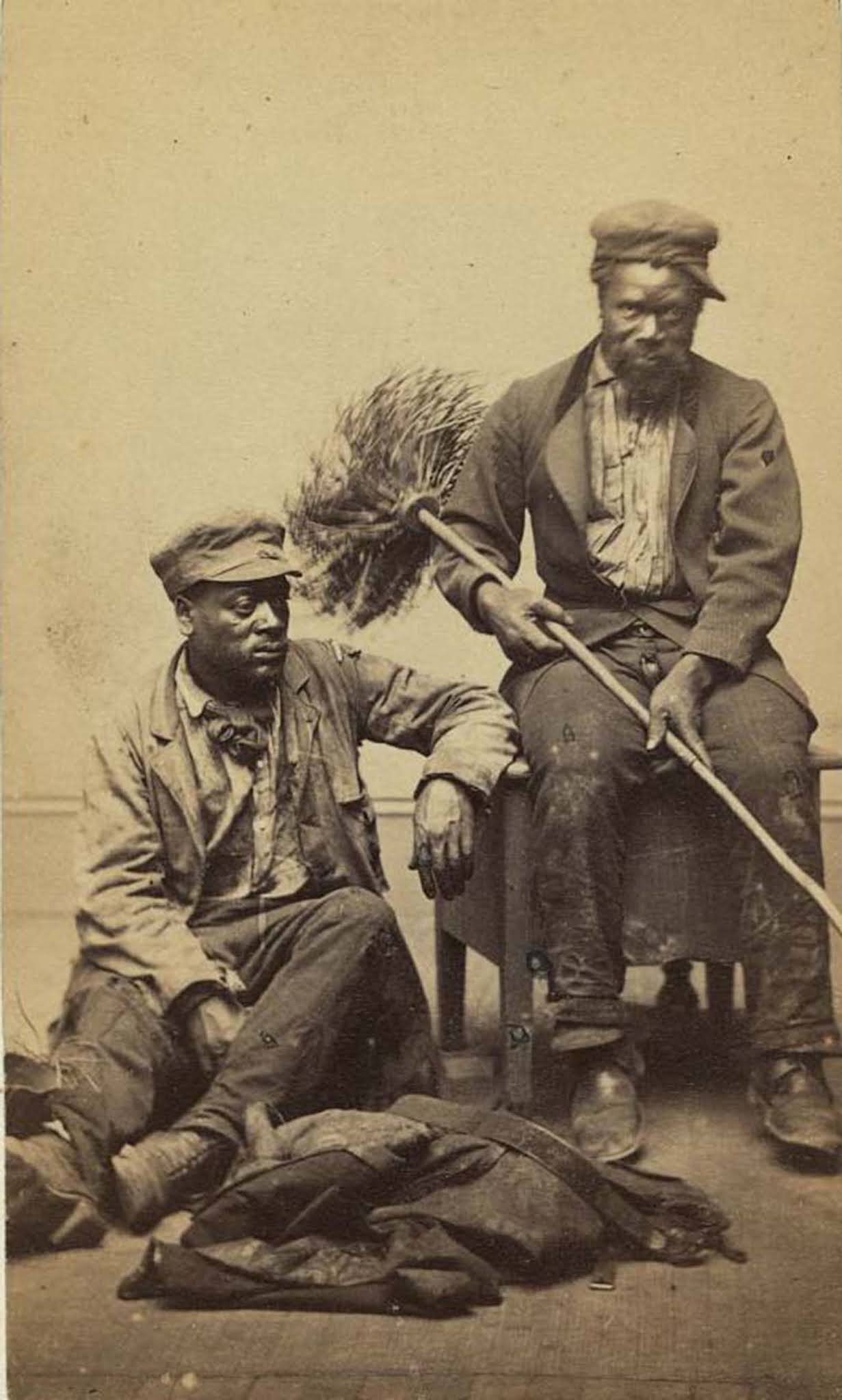 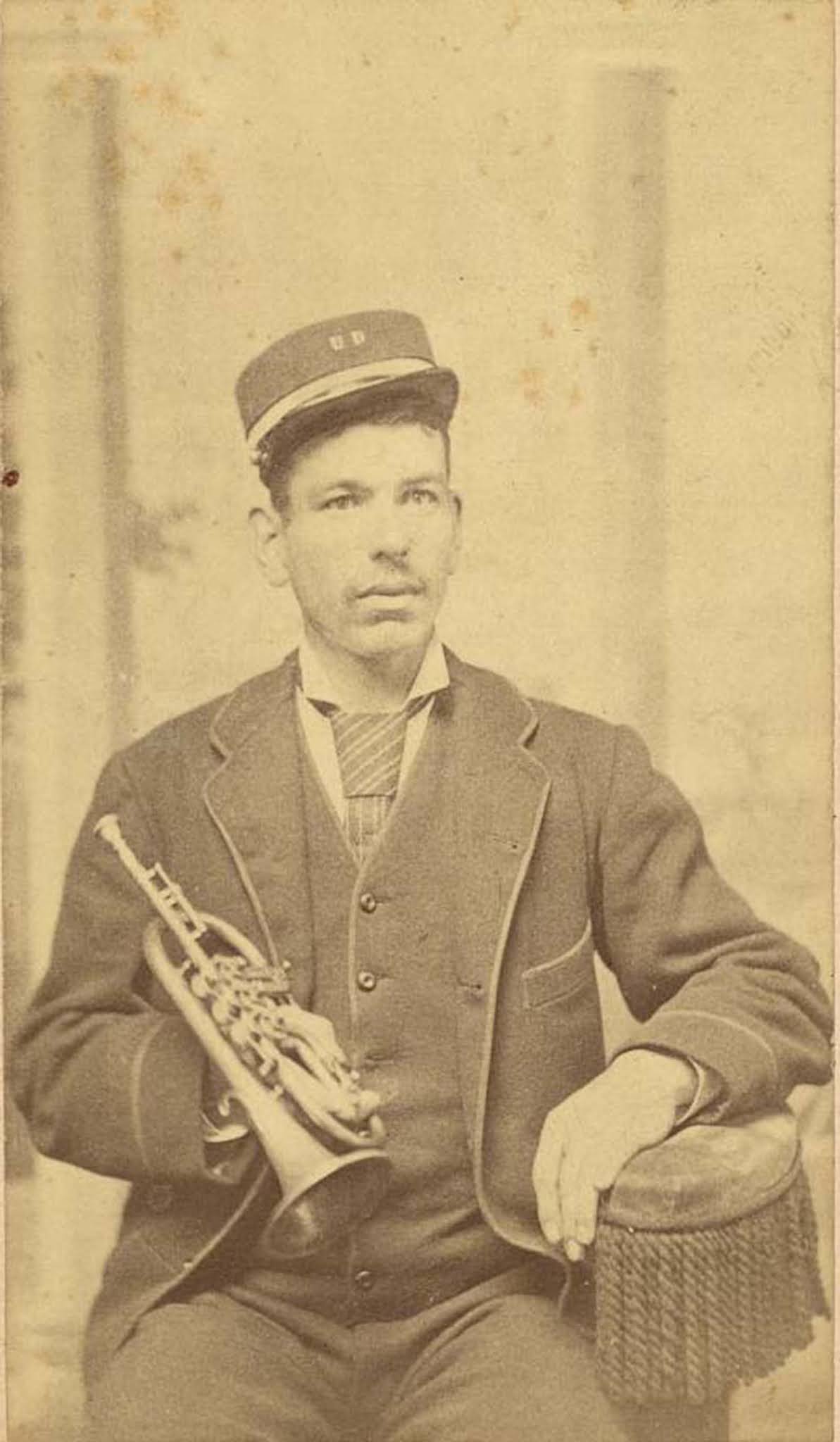 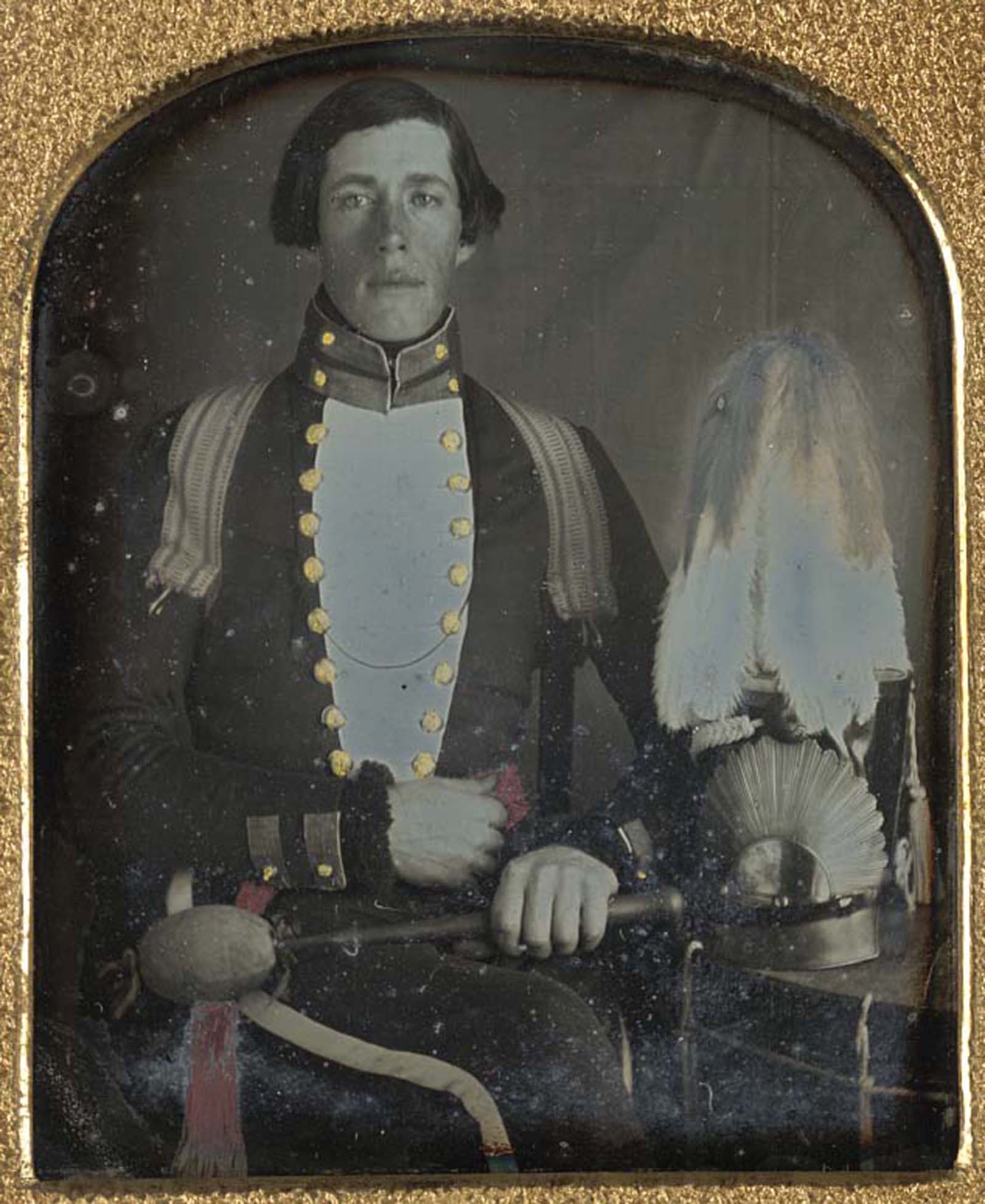 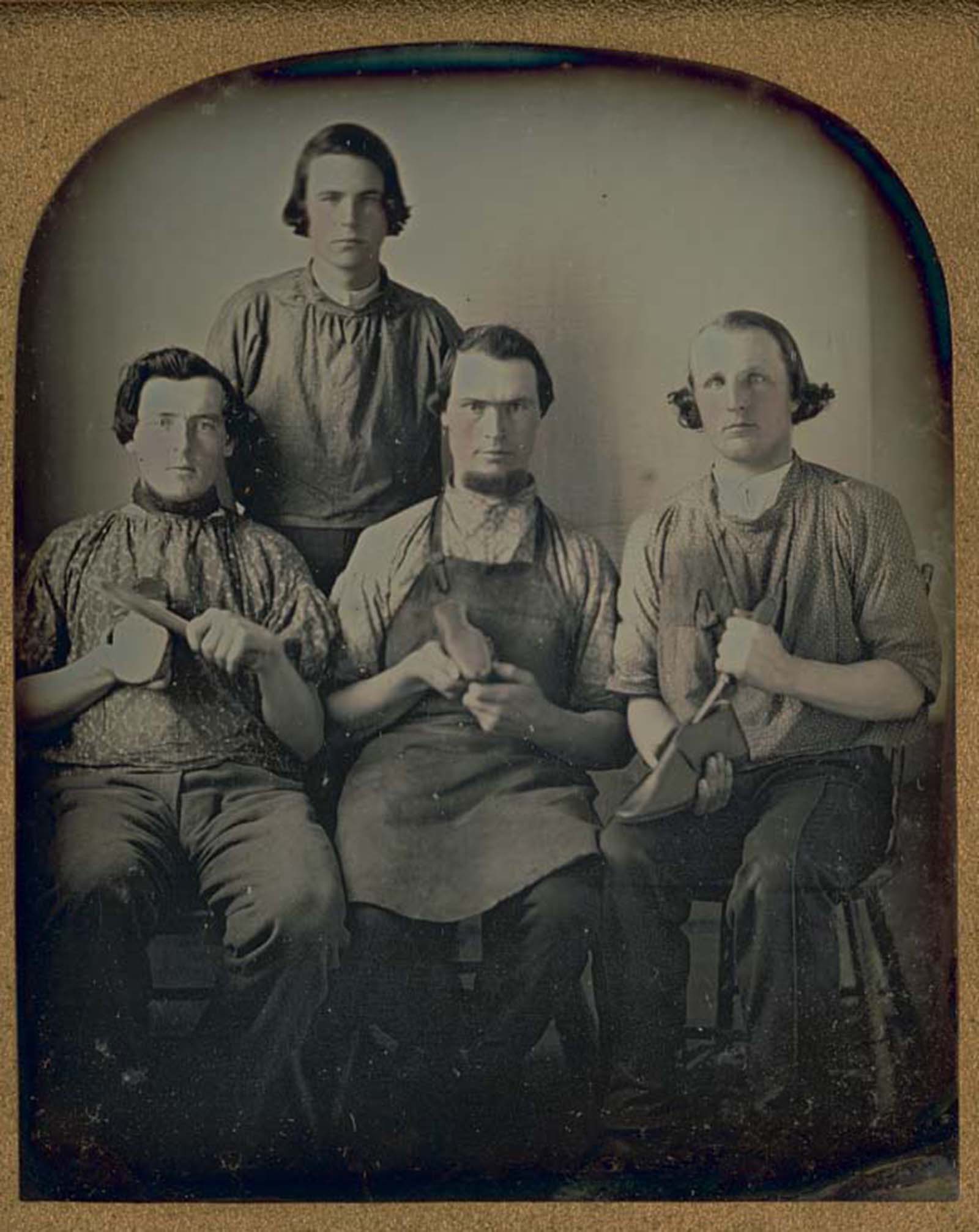