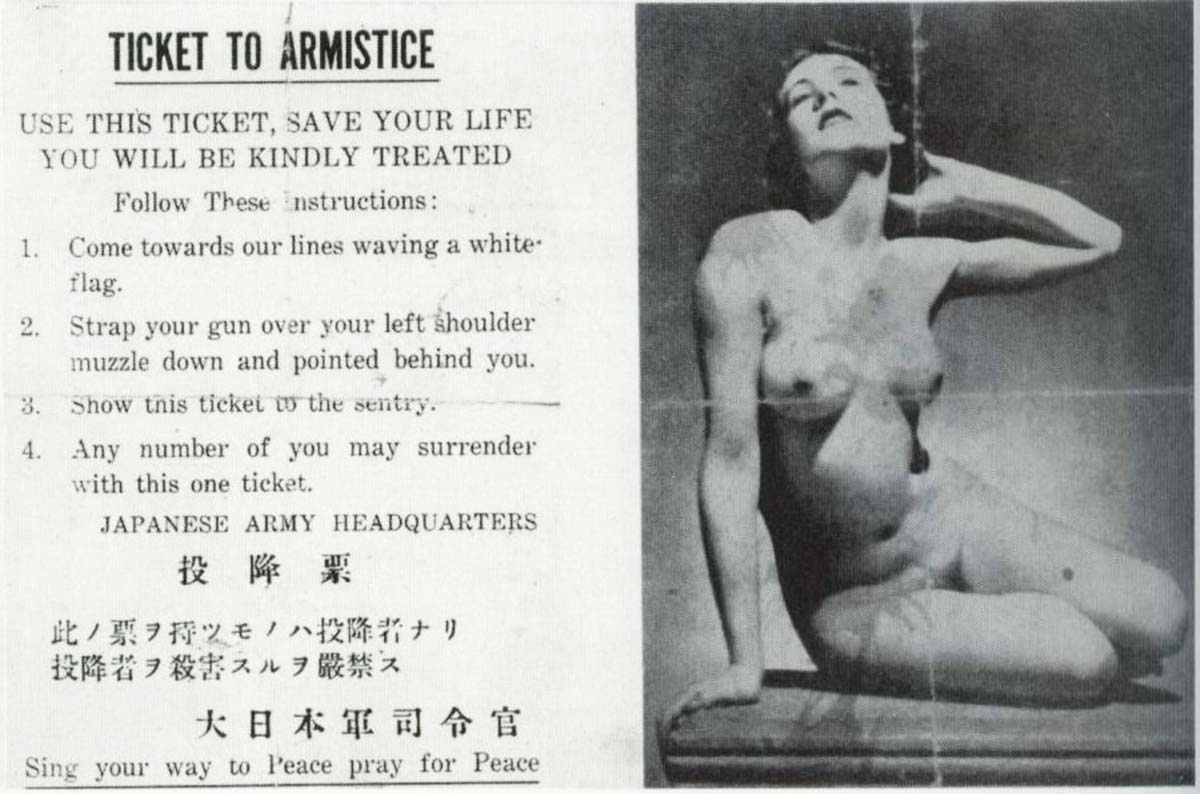 During World War II there were many different forms of propaganda to support the war effort in Japan. Sometimes the Japanese used sexual images in order to influence Allied soldiers to pick up surrender leaflets.

The leaflet above depicts a bare-breasted female in an inviting pose. The bearer of the present ticket is considered as “willing to surrender to the Japanese army”. The Japanese army will charge itself with ensuring his life in the condition that he shows this ticket to Japanese soldiers, with a white flag or raised arms, carrying his rifle stock upwards.

The Japanese propaganda used against the Allied forces aimed to draw their attention away from the war effort and influence them to surrender or go home. Most of the tactics used in this kind of propaganda were sexual and depicted nude women.

Sometimes pictures of nude women were placed on tickets of armistice so as to try to get enemy soldiers to pick them up. Moreover, the nude gave the soldier an excuse to retain possession the ticket: “It’s not a surrender ticket, it’s a nudie picture”.

Then, the reasoning would be that, in a moment of high duress, he might be more likely to break down knowing he could just use the ticket to surrender. Other times, though, it was just to make the men remember the women they had left at home and hopefully get them thinking about sex and make them want to go home again.

The Japanese text on the leaflet translated to English:

Surrender ticket
The bearer(s) of this ticker has surrendered.
It is strictly forbidden to kill him (them).
Commander, Japanese Army forces

Lieutenant Colonel Mahmood Kan Durrani who was an Australian prisoner of the Japanese quotes a lecture given by a Japanese officer on how leaflets should be prepared. One of his six recommendations was:

“The leaflet should have, if possible, the picture of a beautiful woman, after the method used by the Germans in the First World War. This device would ensure that the soldier would be attracted and would be unable to resist looking at the picture over and over again. This would rouse his passion, and his heart would be inclined for love and to hate fighting.” (From Sex and Psychological Operations by Herbert A. Friedman).