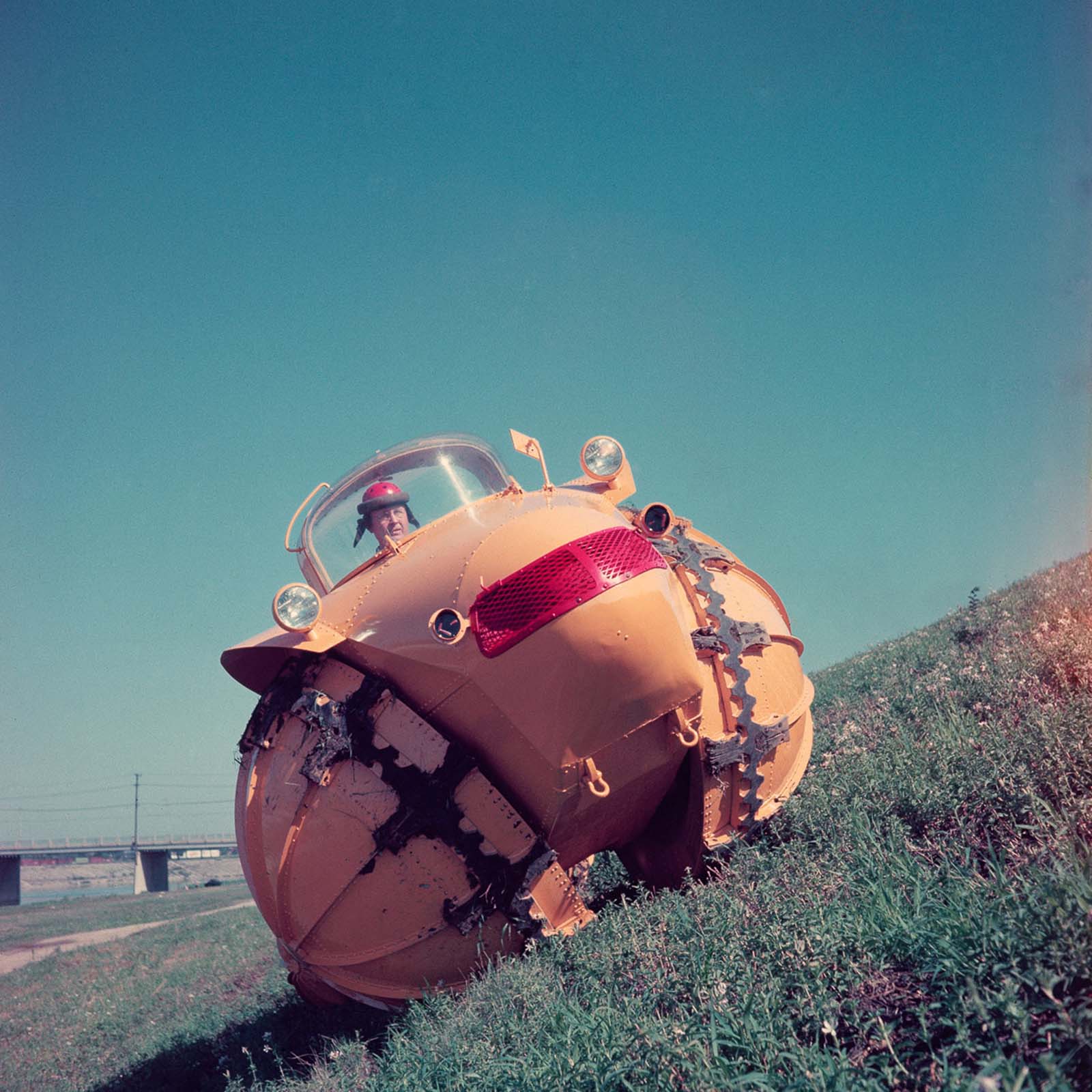 Called the Rhino, this four-wheel, five-tone driving machine was designed to patrol and defend the vast open spaces of Alaska and Canada without succumbing to the region’s formidable, varied terrain.

The bizarre amphibious four-wheeled vehicle called Rhino was designed by the Greek-American inventor Elie Aghnides. In the 1940s, Aghnides was watching a tractor laboring through New York City’s Central Park and figured he could combine the stability of a bulldozer with the speed of a car, and create an efficient, all-terrain vehicle.

A few years later, he came up with the concept of an enormous vehicle nicknamed “The Rhino”. Defining features were its massive slanted front wheels, which had six-foot diameters and weighed 1,500 pounds each. The wheels were also hollow, which allowed the Rhino to float, meanwhile, a hydrojet propelled it forward along the water body.

The odd-looking vehicle weighed five tons and could travel with ease through deep sand, mud, and water. On the highway, it reached up to 45 miles per hour, but in water, it couldn’t surpass speeds of 5 miles per hour.

The prototype was built by Marmon-Harrington in Indianapolis in 1954. It was designed with a low center of gravity which meant it could tip 75 degrees to either side without toppling over.

Aghnides demonstrated the invention for the military, but they decided not to purchase the invention because they feared the inflatable wheels could be pierced by gunfire. Several photos and videos exist of the testing of the vehicle. 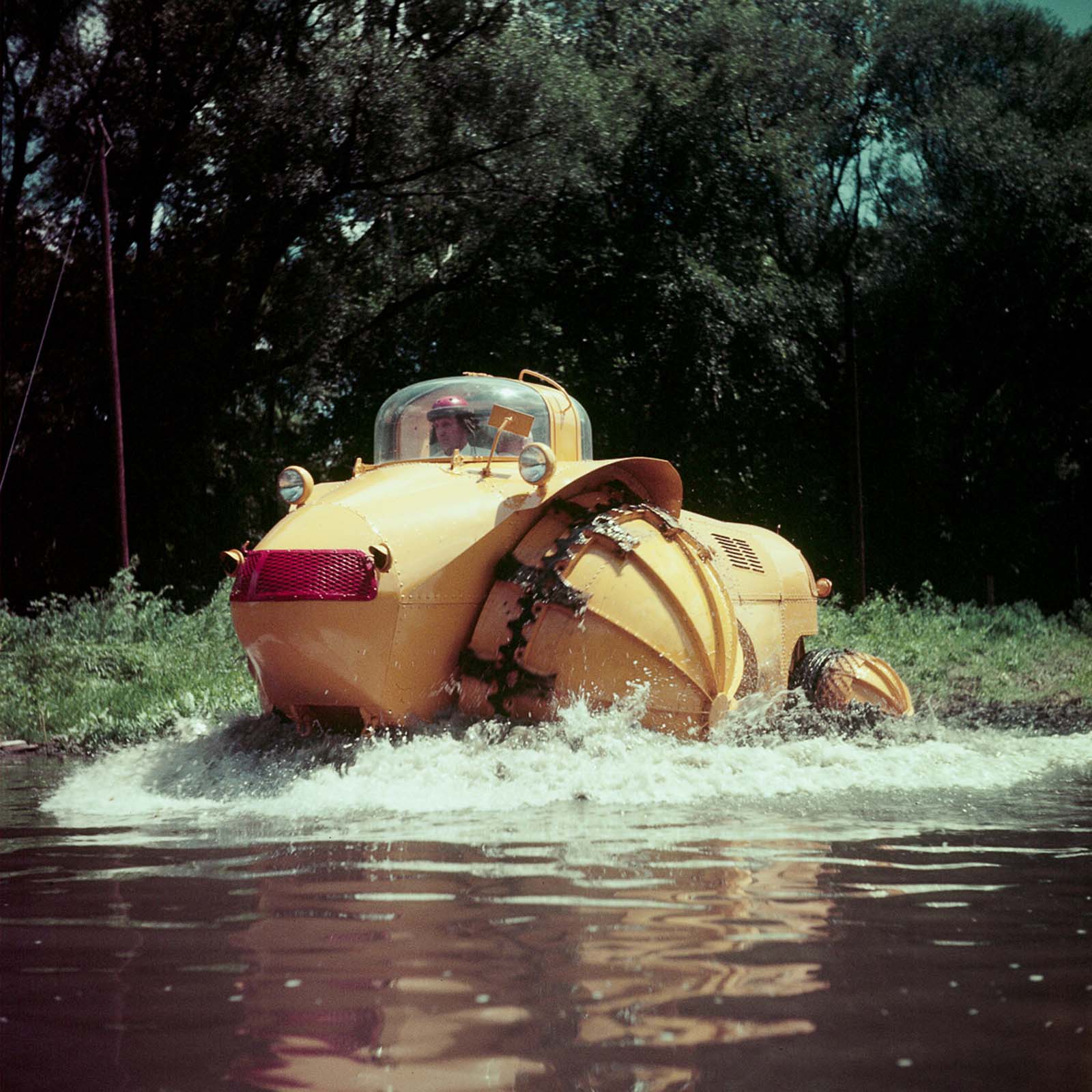 The prototype, pictured here, was built by the Marmon-Herrington Company of Indianapolis in 1954. 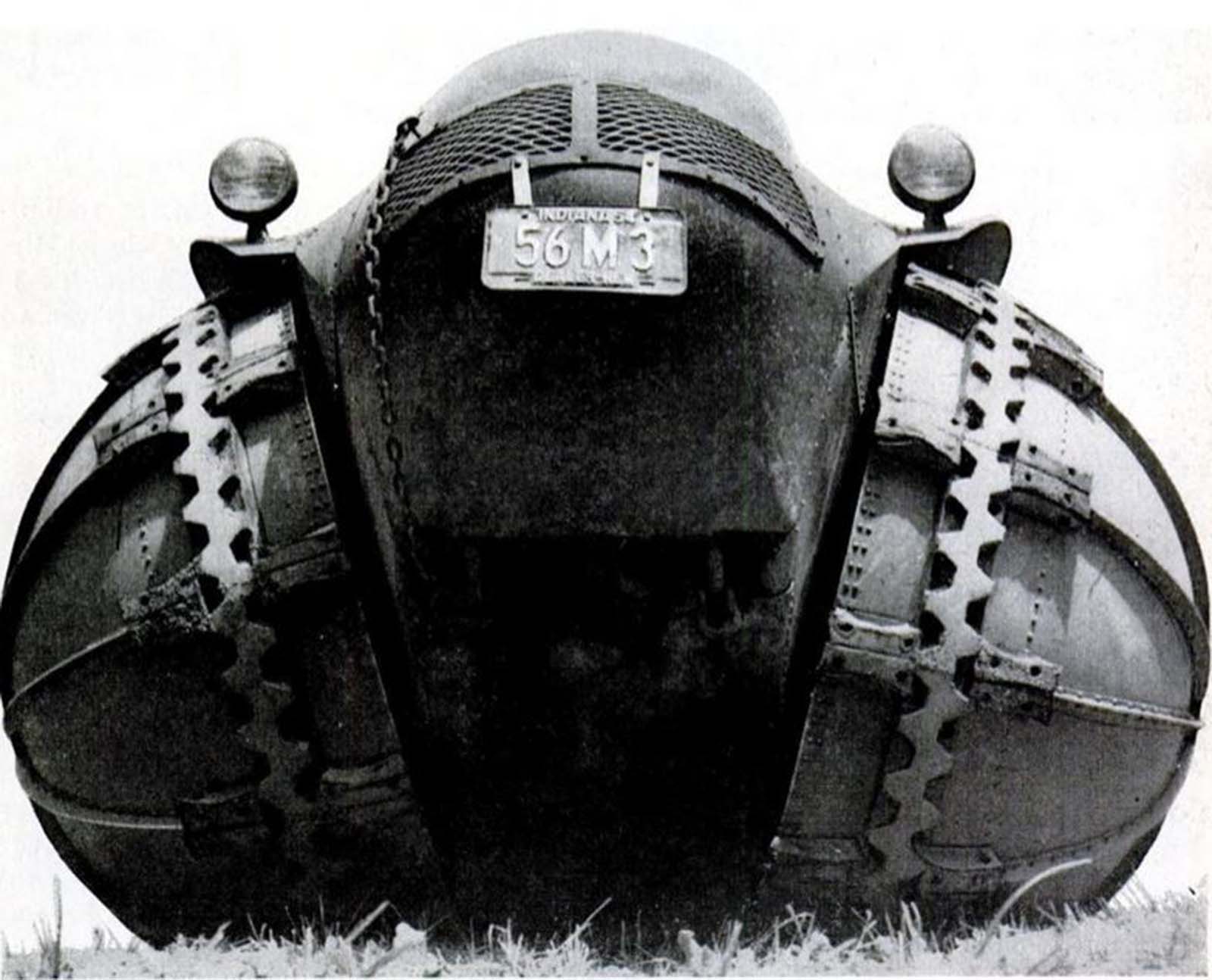 On hard terrain only the zigzag strip of rubber around Rhino’s wheels touches the roadways. As they sink into soft footing, more and more of their ribbed surface takes hold. 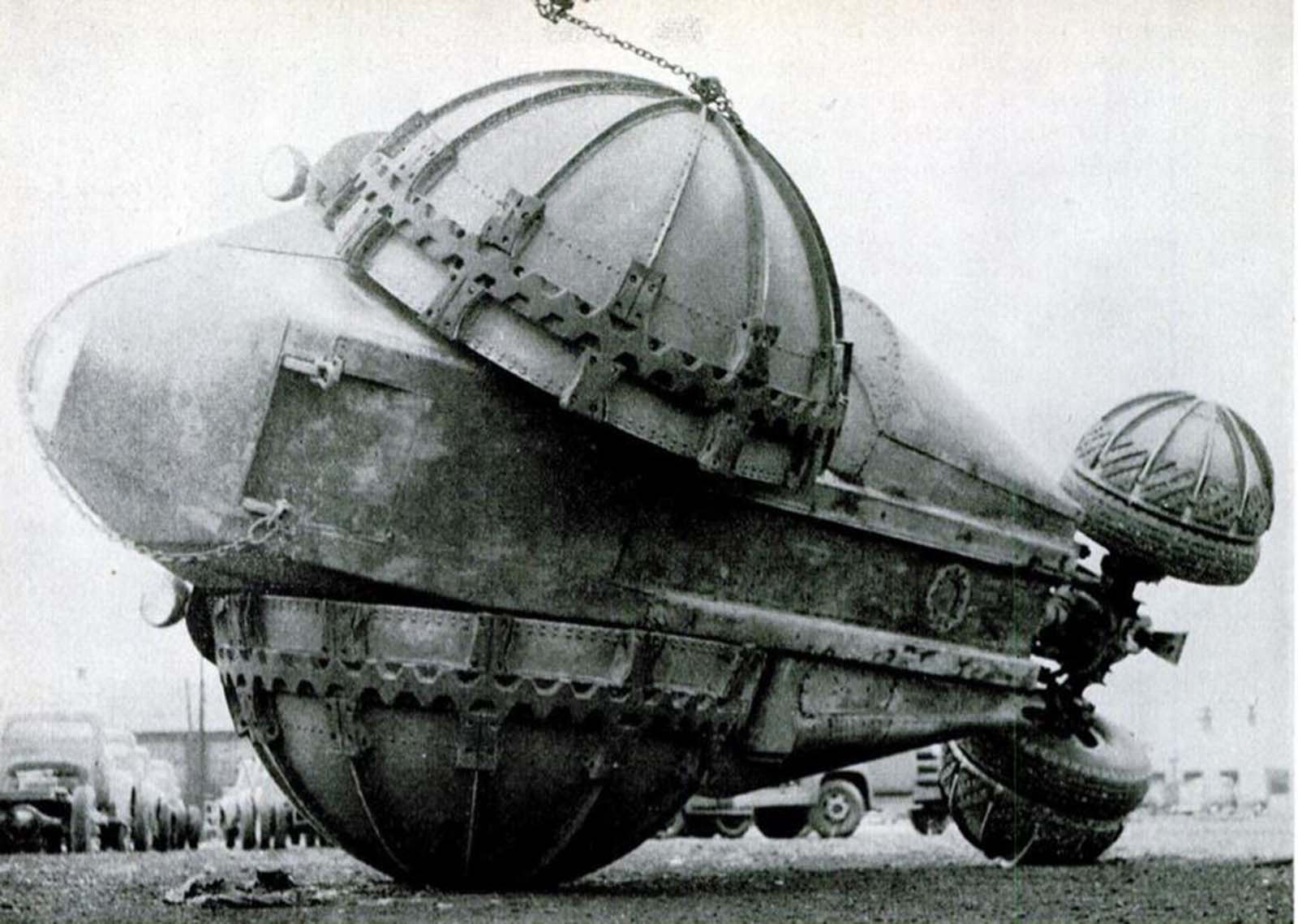 Low center of gravity lets Rhino list 74 degrees without toppling over. The five-ton vehicle is 19 ft. long, 9 ft. wide, 9 ft. 10 in. high. The body is aluminum welded to the steel frame. 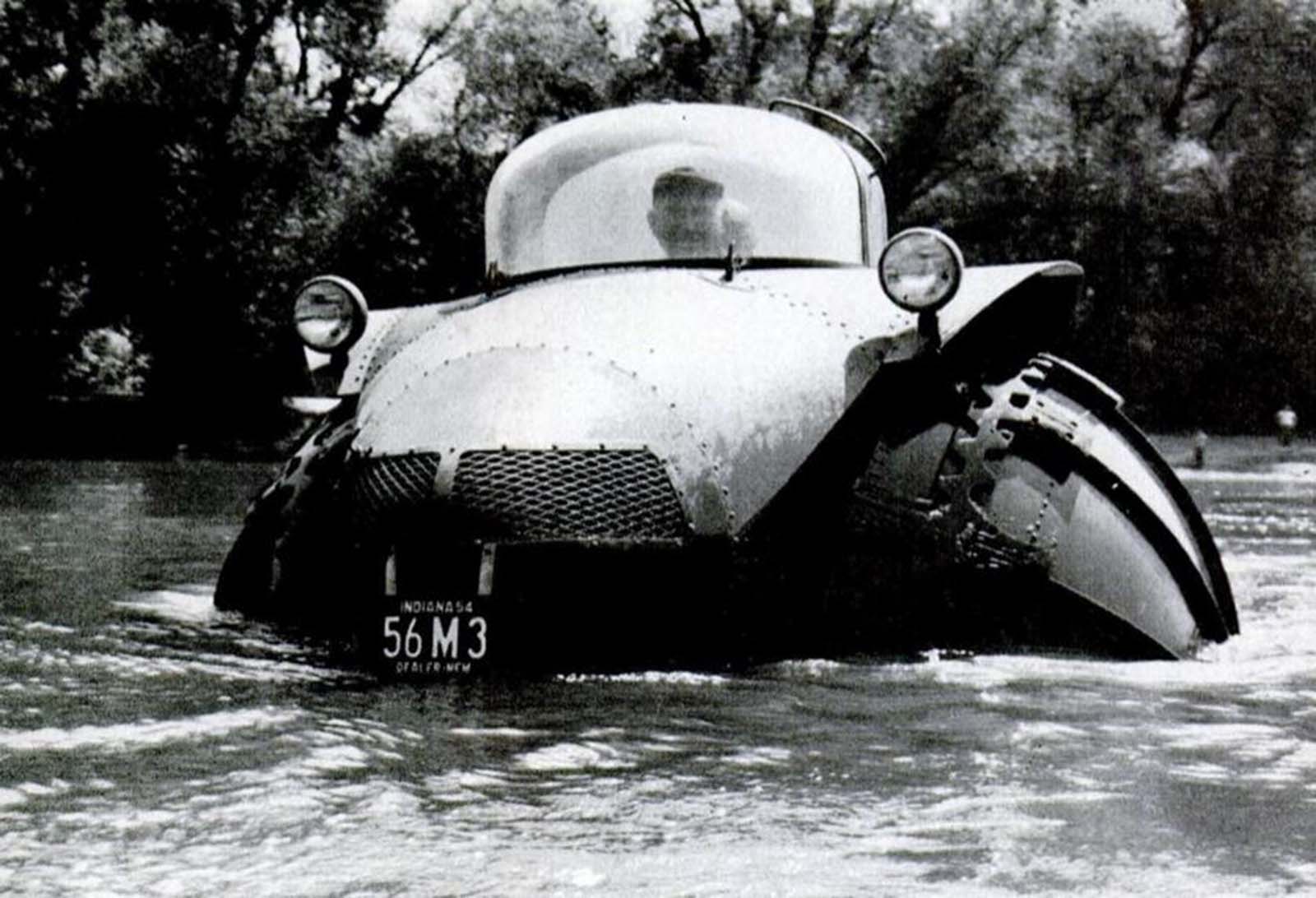 Hollow wheels and seam-welded body keep Rhino afloat. It makes 5 miles per hour in water and up to 45 on concrete with 110-hp. engine that the inventor planned to replace with a more powerful one. 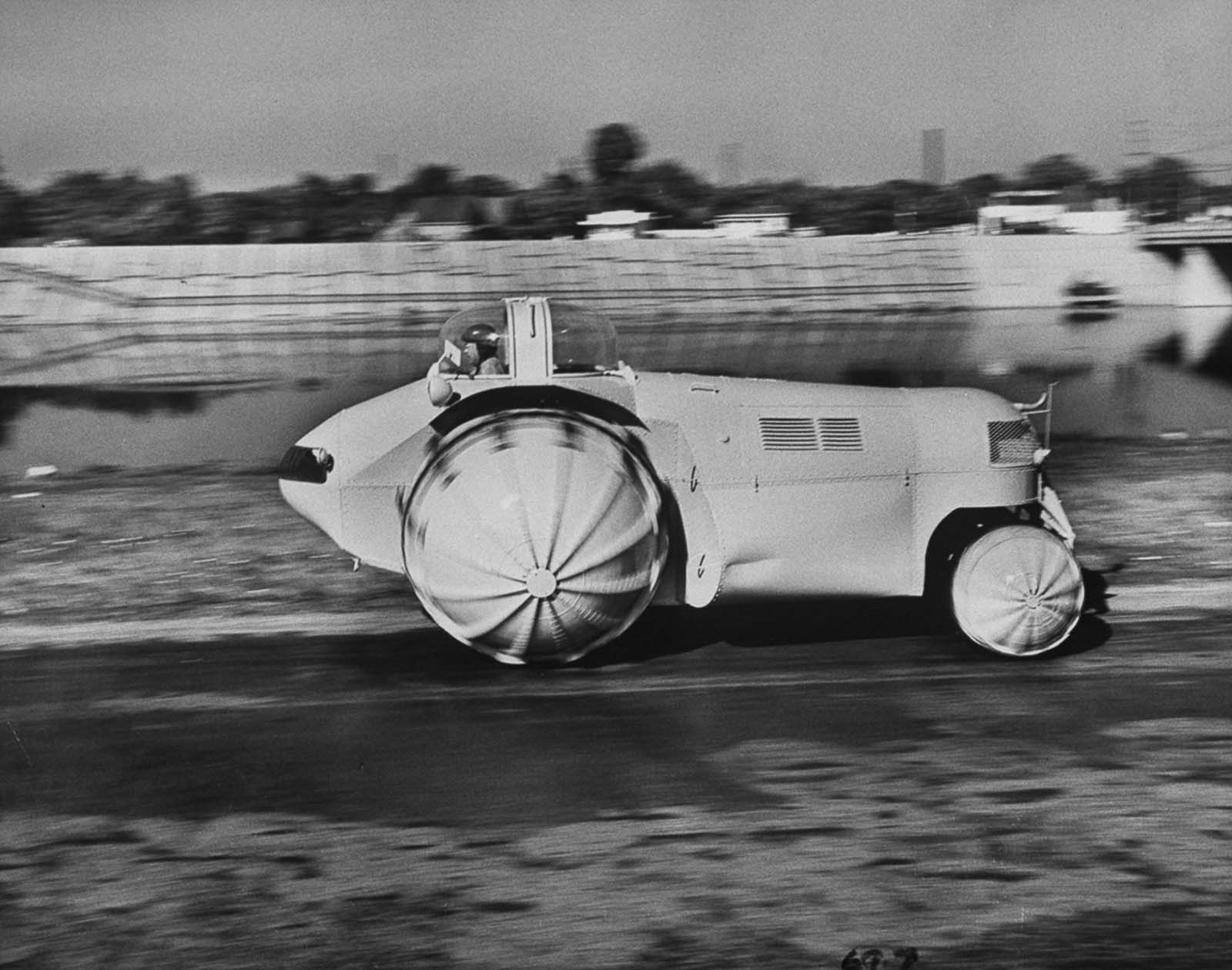 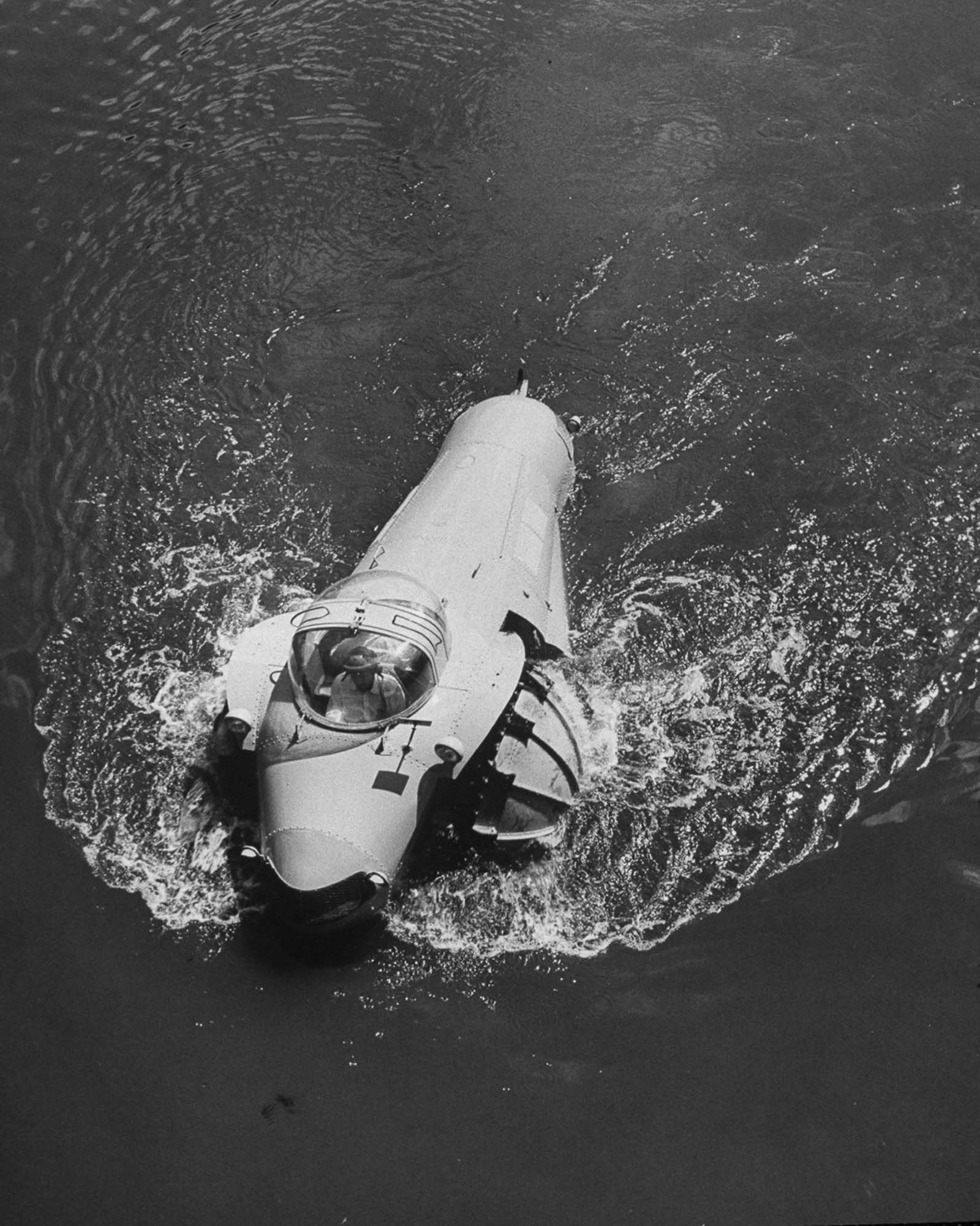