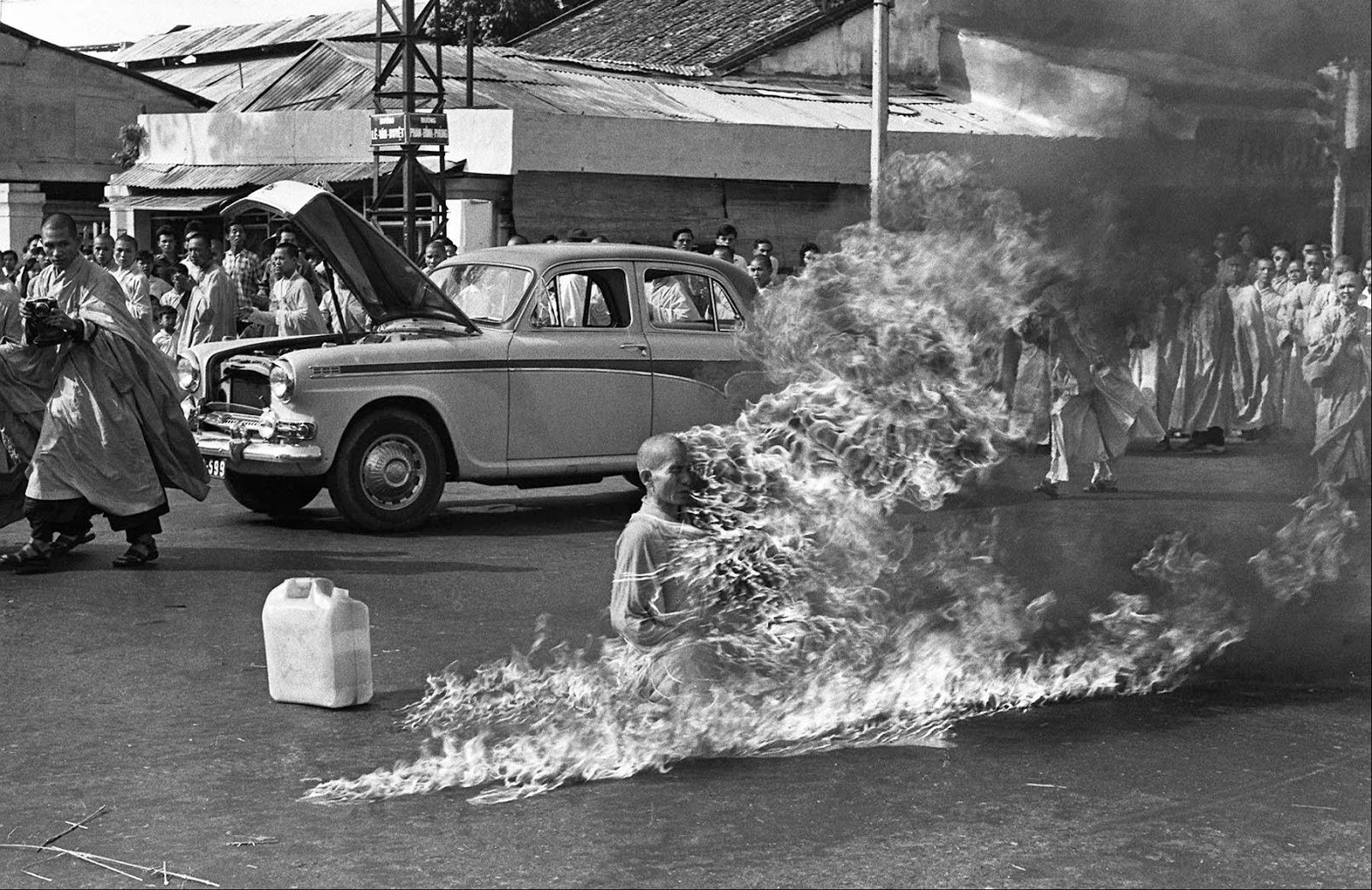 The self-immolation was done in protest of the South Vietnamese Diem regime’s pro-catholic policies and discriminatory Buddhist laws. In particular, this was a response to the banning of the Buddhist flag, just 2 days after Diem had held a very public ceremony displaying crosses; earlier in his rule, he had dedicated Vietnam to Jesus and the Catholic Church.

The growing resentment of Buddhists under Diem was one of the underlying issues of South Vietnam and eventually led to a coup to put in place a leader who would not alienate Buddhists, who made up 70-90% of Vietnam’s population. 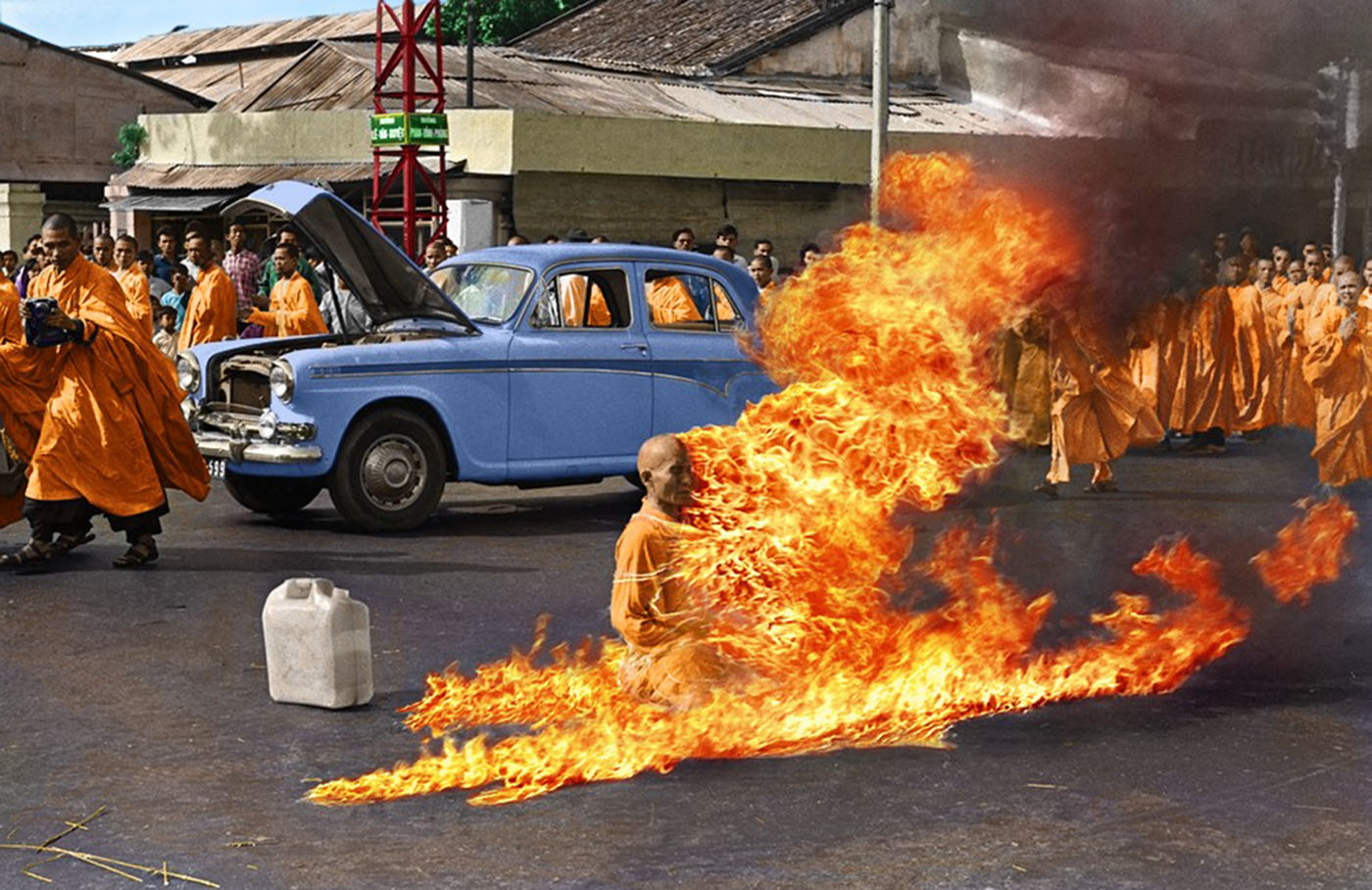 On 10 June 1963, U.S. correspondents were informed that “something important” would happen the following morning on the road outside the Cambodian embassy in Saigon.

Most of the reporters disregarded the message since the Buddhist crisis had at that point been going on for more than a month and the next day only a few journalists turned up, including David Halberstam of The New York Times and Malcolm Browne, the Saigon bureau chief for the Associated Press.

Duc arrived as part of a procession that had begun at a nearby pagoda. Around 350 monks and nuns marched carrying denouncing the Diem government and its policy towards Buddhists.

As the marchers formed a circle around him, Duc calmly sat down in the traditional Buddhist meditative lotus position on the cushion. A colleague emptied the contents of the petrol container over Duc head.

Duc rotated a string of wooden prayer beads and recited the words Nam mô A di đà Phật (“homage to Amitābha Buddha“) before striking a match and dropping it on himself. Flames consumed his robes and flesh, and black oily smoke emanated from his burning body. 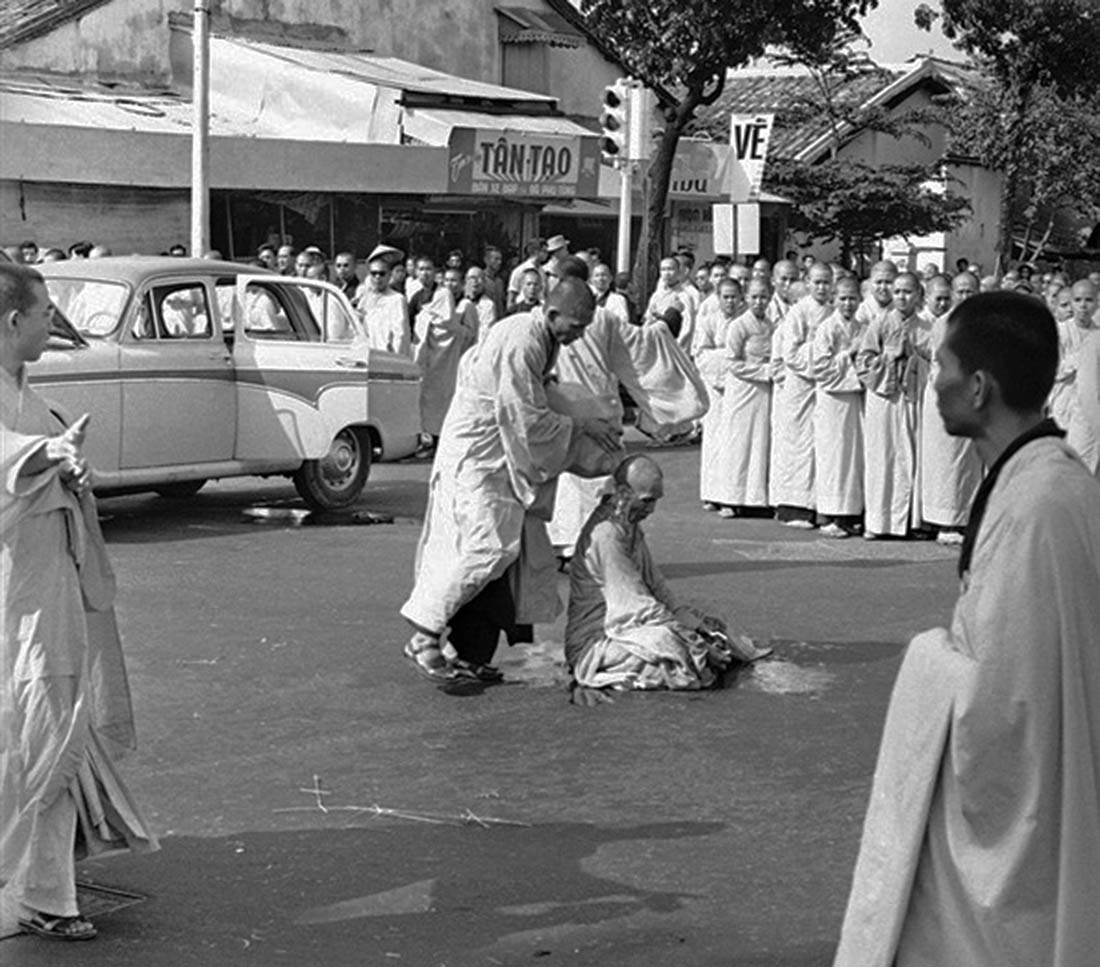 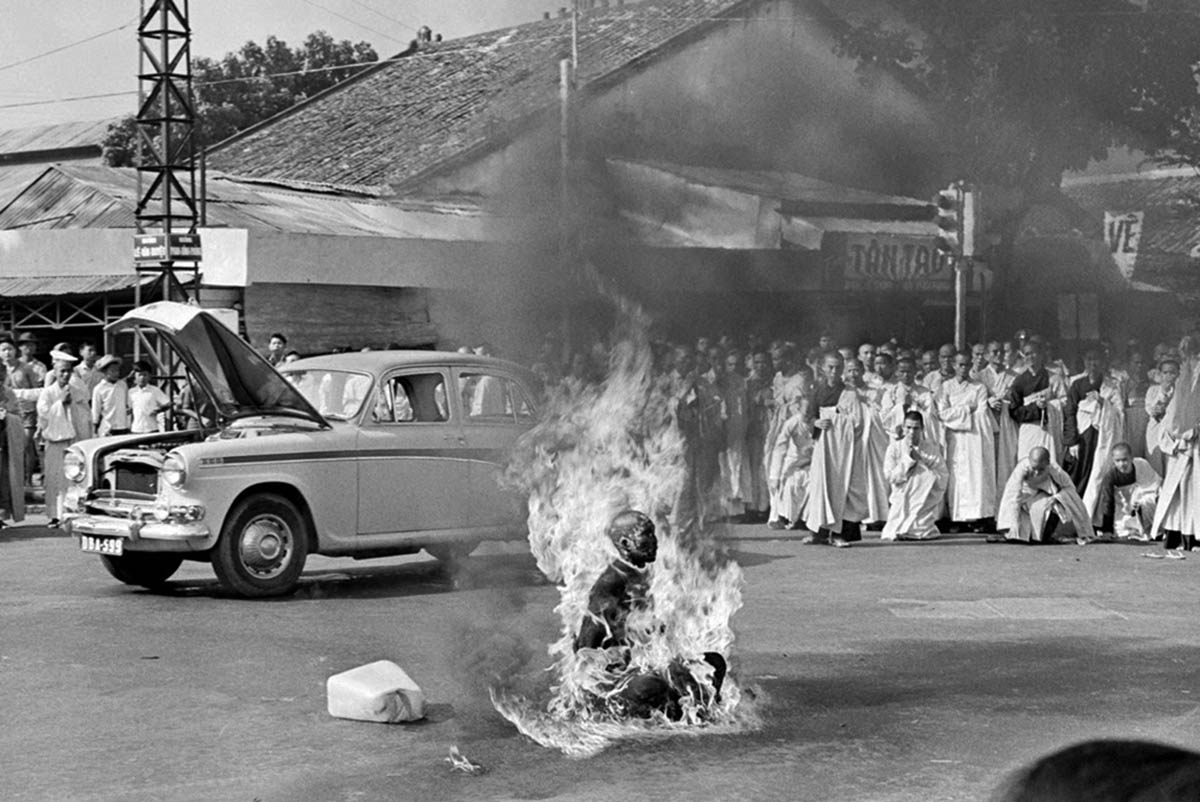 “I was to see that sight again, but once was enough. Flames were coming from a human being; his body was slowly withering and shriveling up, his head blackening and charring. In the air was the smell of burning human flesh; human beings burn surprisingly quickly.

Behind me, I could hear the sobbing of the Vietnamese who were now gathering. I was too shocked to cry, too confused to take notes or ask questions, too bewildered to even think… As he burned he never moved a muscle, never uttered a sound, his outward composure in sharp contrast to the wailing people around him”. 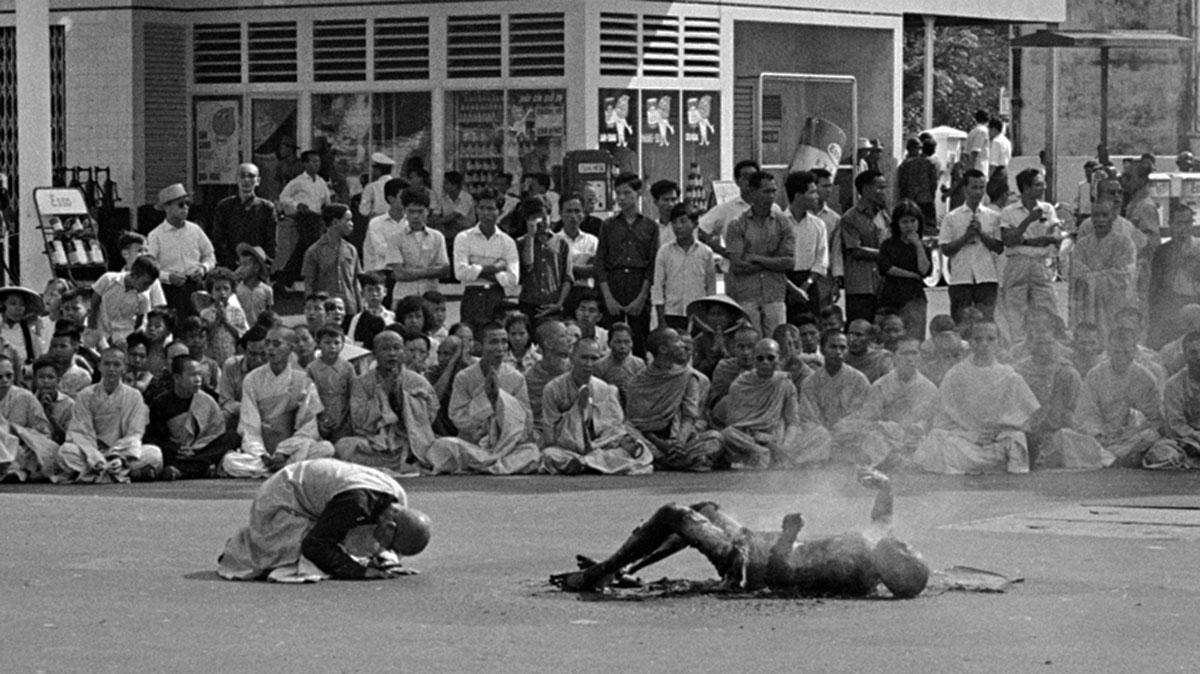 The spectators were mostly stunned into silence, but some wailed and several began praying. Many of the monks and nuns, as well as some shocked passersby, prostrated themselves before the burning monk. 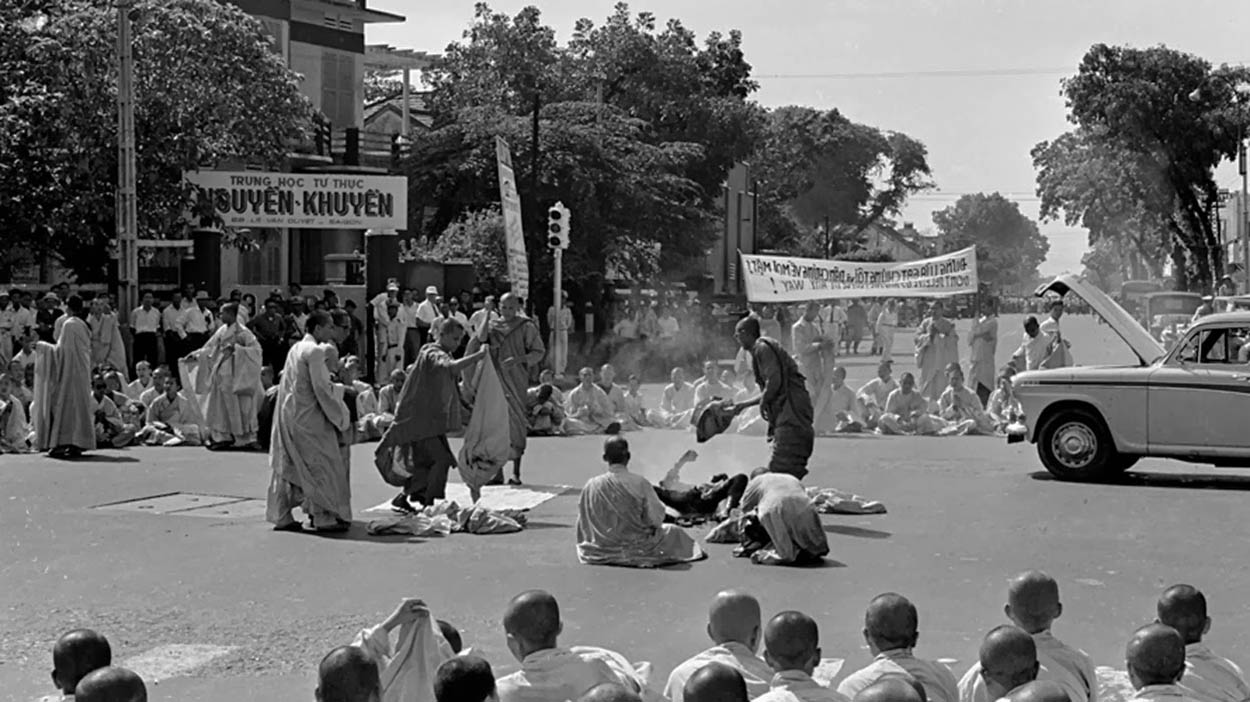 After approximately ten minutes, Duc’s body was fully immolated and it eventually toppled backward onto its back. Once the fire subsided, a group of monks covered the smoking corpse with yellow robes, picked it up, and tried to fit it into a coffin, but the limbs could not be straightened and one of the arms protruded from the wooden box as he was carried to the nearby pagoda in central Saigon.

Quang Duc’s body was re-cremated during the funeral, but Duc heart remained intact and did not burn. It was considered to be holy and placed in a glass chalice at Xa Loi Pagoda. The intact heart relic is regarded as a symbol of compassion.

Despite the shock of the Western public, the practice of Vietnamese monks self-immolating was not unprecedented. Instances of self-immolations in Vietnam had been recorded for centuries, usually carried out to honor Gautama Buddha.

Photographs taken by Malcolm Browne of the self-immolation quickly spread across the wire services and were featured on the front pages of newspapers worldwide.

The self-immolation was later regarded as a turning point in the Buddhist crisis and a critical point in the collapse of the Diem regime. Malcolm Browne won a Pulitzer Prize for his photograph of the monk’s death.

(Photo credit: Malcolm Browne / The colorized version made by u/mygrapefruit.)