Medical sciences in the early parts of the 20th century were far advanced from the medieval days of leeches, but still, most of the treatments and medical devices were misguided and often even barbaric by our modern standards.

Seeming to mean well, bizarre contraptions were built, claiming to aid the ailing patients. A little pseudoscience and quackery were also thrown in the mix.

Over years, scientists and doctors experimented with some really strange-looking devices, which had questionable effects on the patients, sometimes simply being a placebo.

Whether it was due to lack of research back then, or the opportunists were out to make a quick buck – the field of medicine had certainly gone through strange times.

These old photographs depict the horrible procedures of treatment, terrifying medical instruments, and haunting medical devices that, in many cases, had no real positive effect on patients.

(Another vintage photo collection of bizarre medical treatments can be found here). 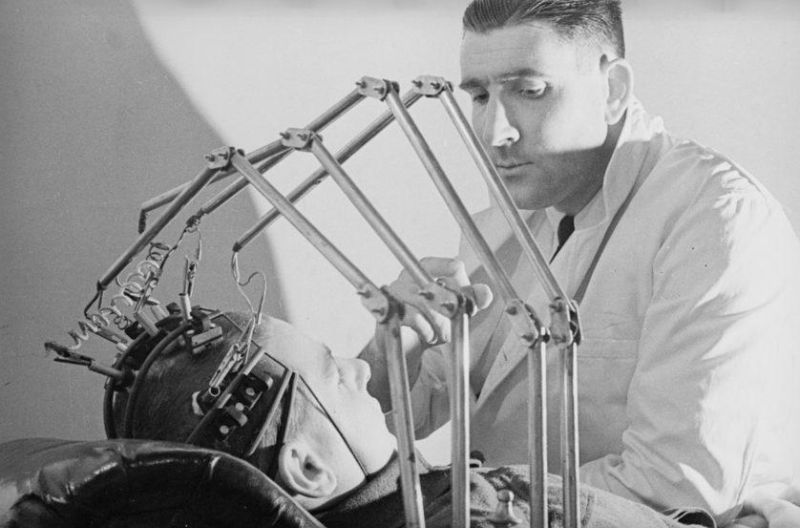 Measuring the brainwaves, 1940. A machine (with 4 flexible rods attached to the brain to transmit data) for measuring brainwaves. It was designed and used in 1940. 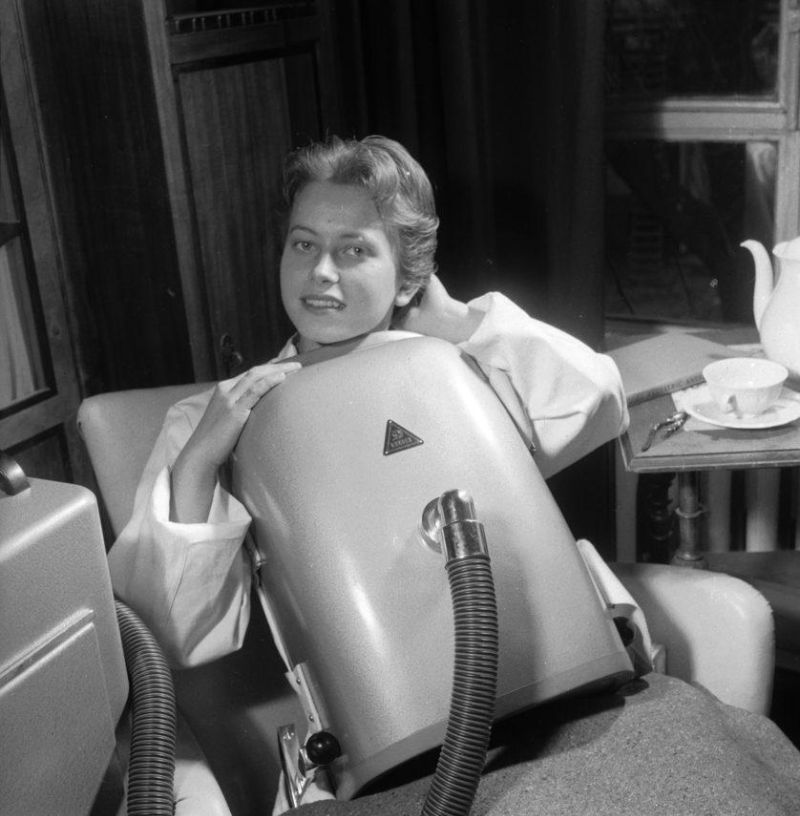 A portable respirator, or iron lung, designed to enable patients to recuperate at home. 1955.

This machine above was first introduced in the 1952, Denmark. It was used by patients whose lungs were paralyzed. The oxygen was delivered via a rubber concertina reservoir bag, which was constantly compressed by an electric motor. 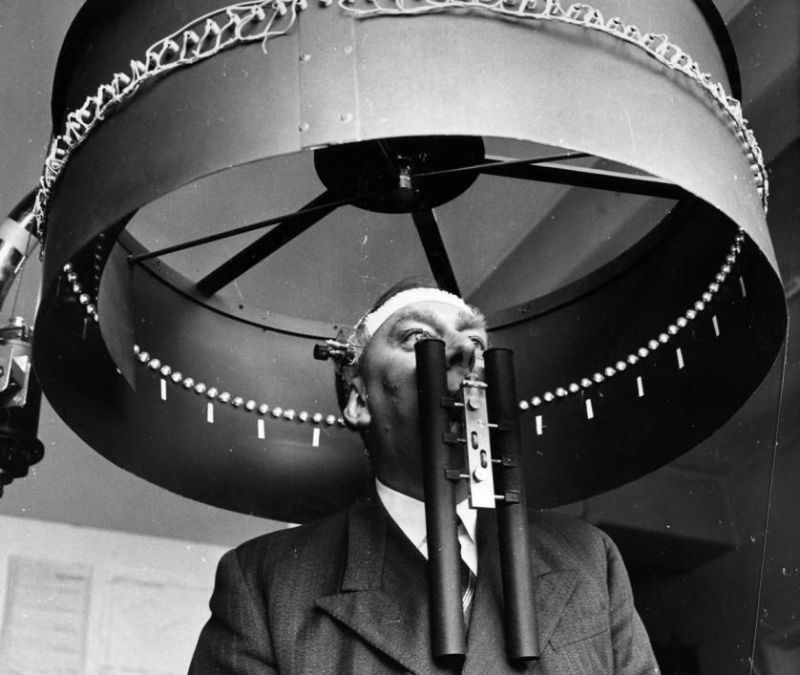 Dr G. H. Byford stands under an optokinetic drum wearing a contact lens with a miniature lamp cemented to the lens, during an experiment to investigate the reflex movements of the eyes and their association with visual illusions, at the RAF Institute of Aviation Medicine in Farnborough. 1960. 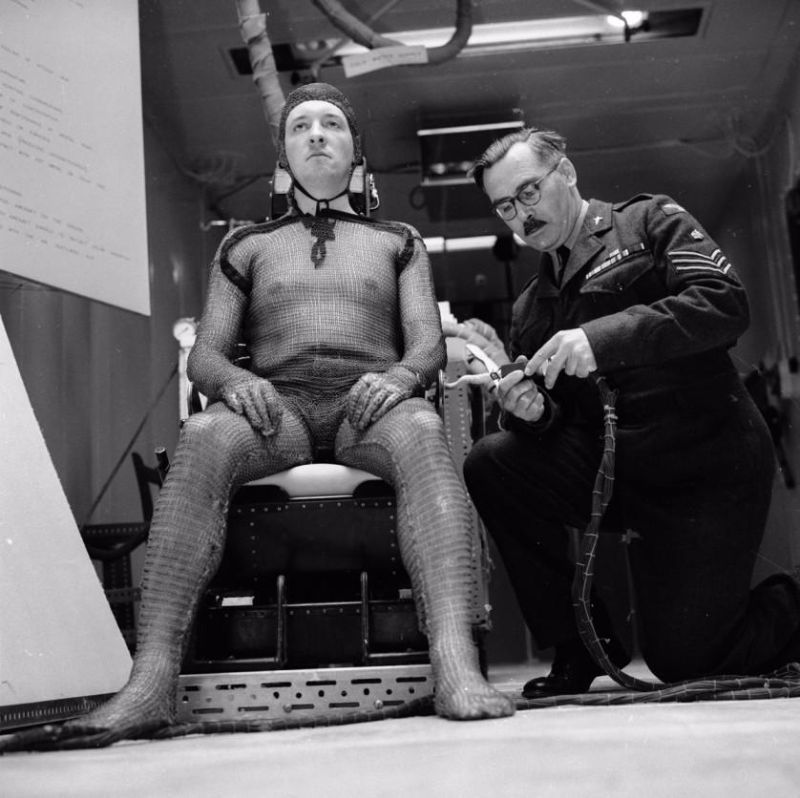 A wire suit designed to measure body temperatures while researching the physiological effects of high speed and space travel. 1960. 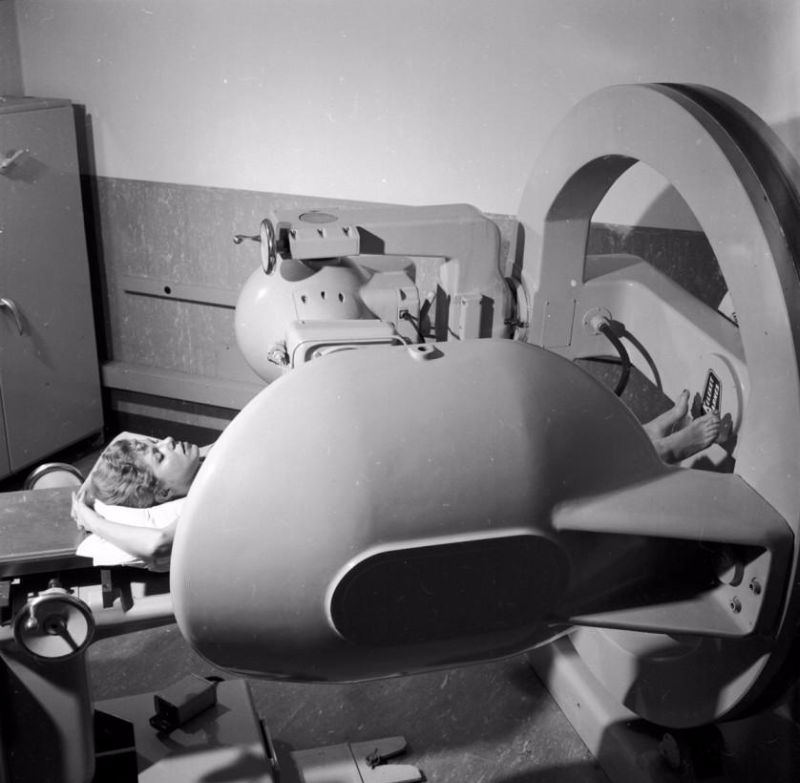 A rotating cobalt machine swinging around the body of a patient, attacking cancerous tumors. 1955. 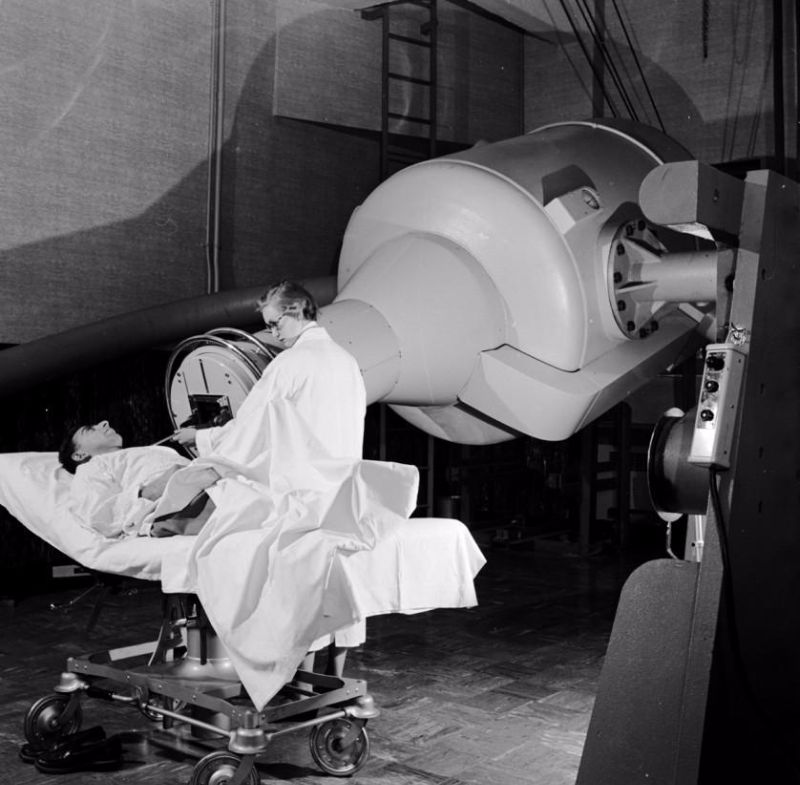 A physician adjusts the beam path of the 2,000,000 volt Deep Therapy X-Ray Machine used to treat cancer at the Francis Delafield Hospital in New York City. 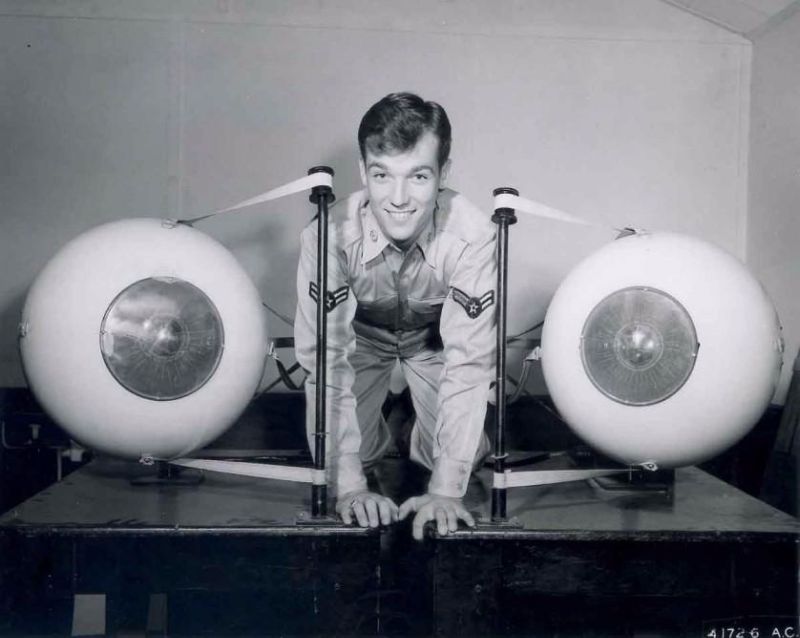 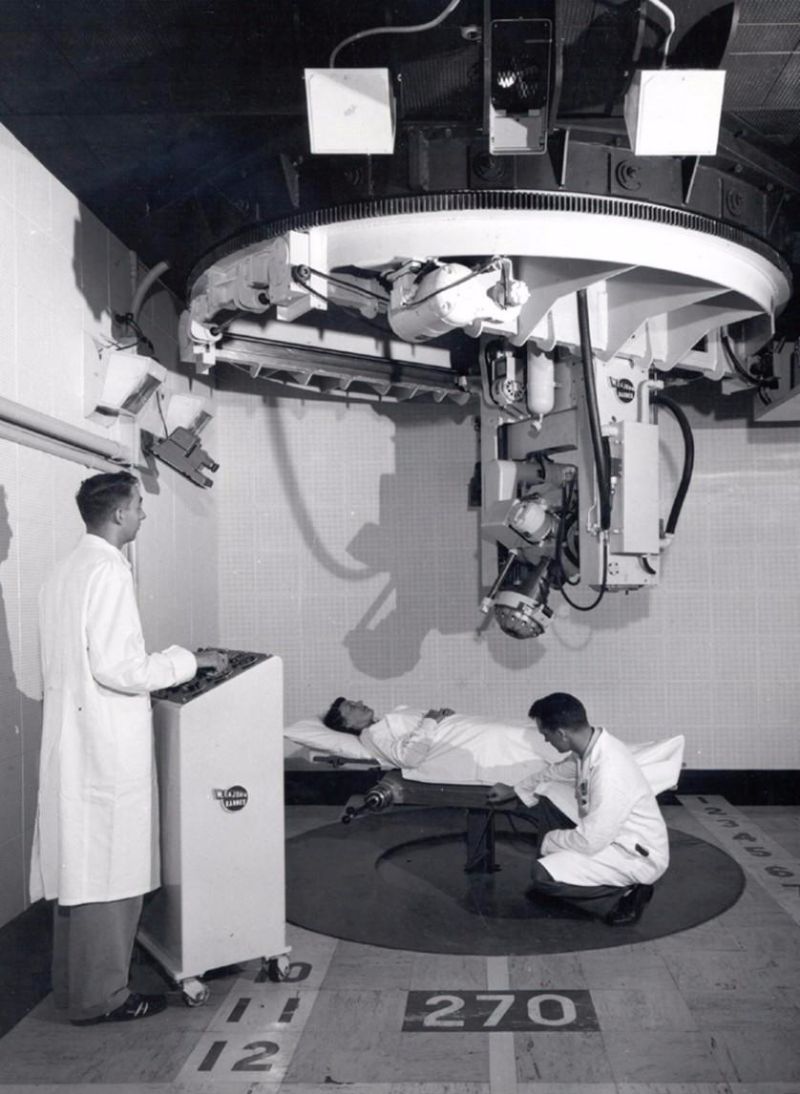 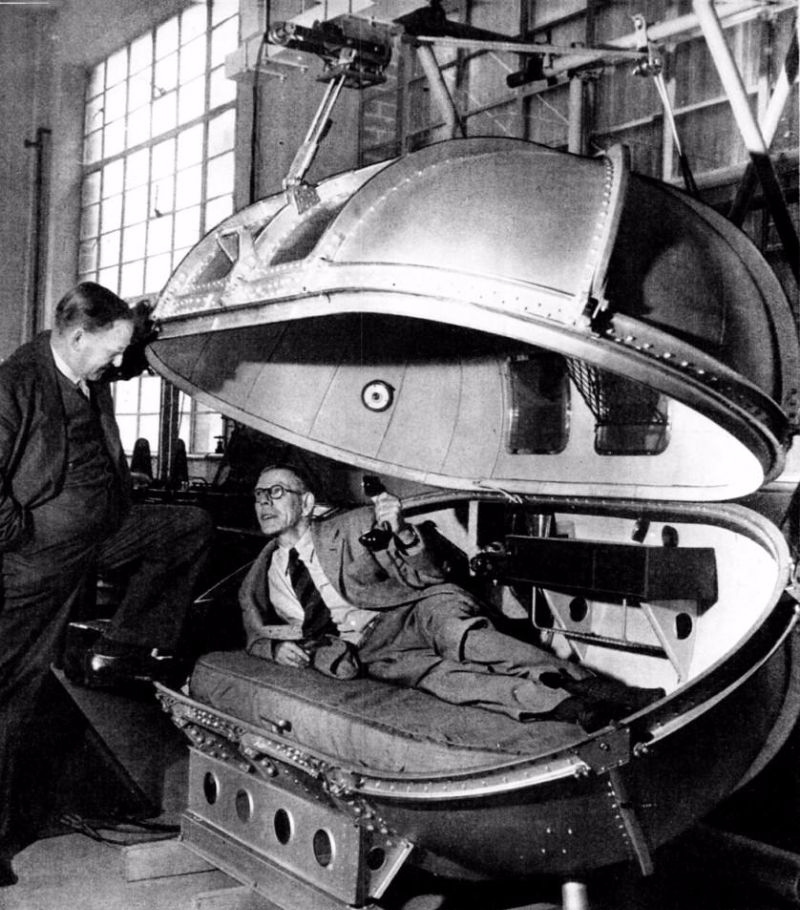 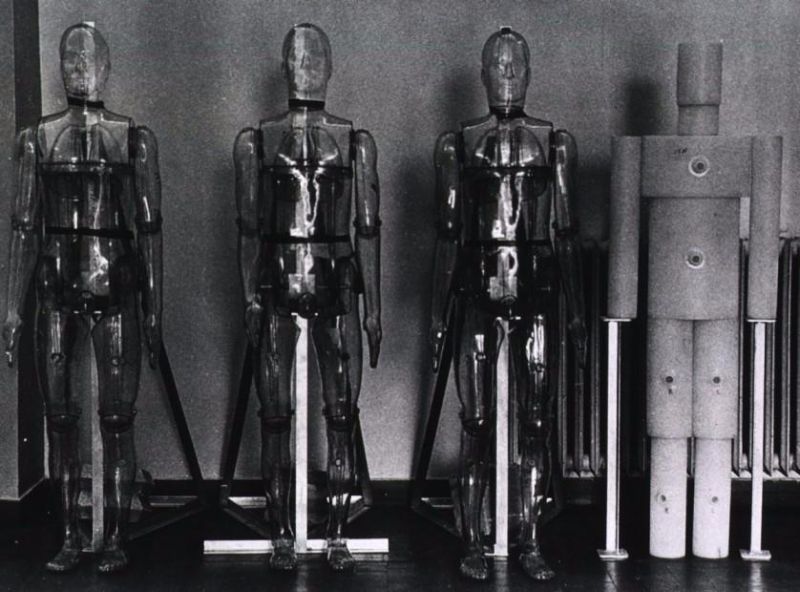 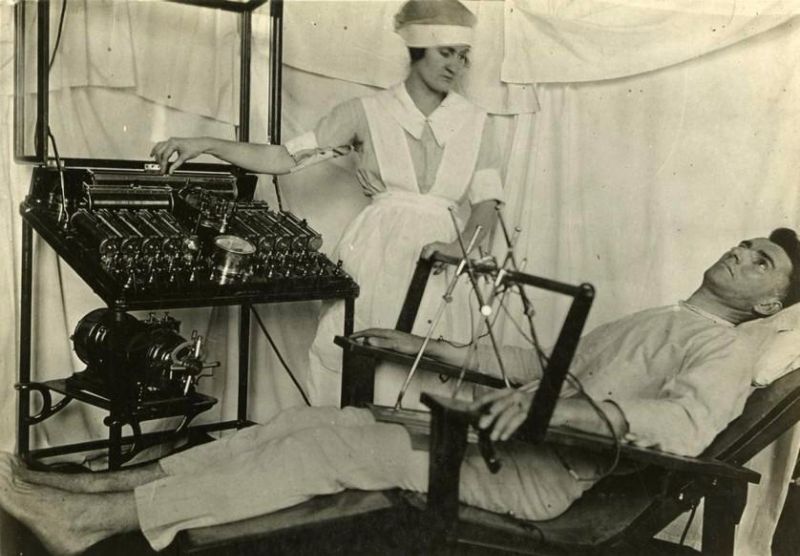 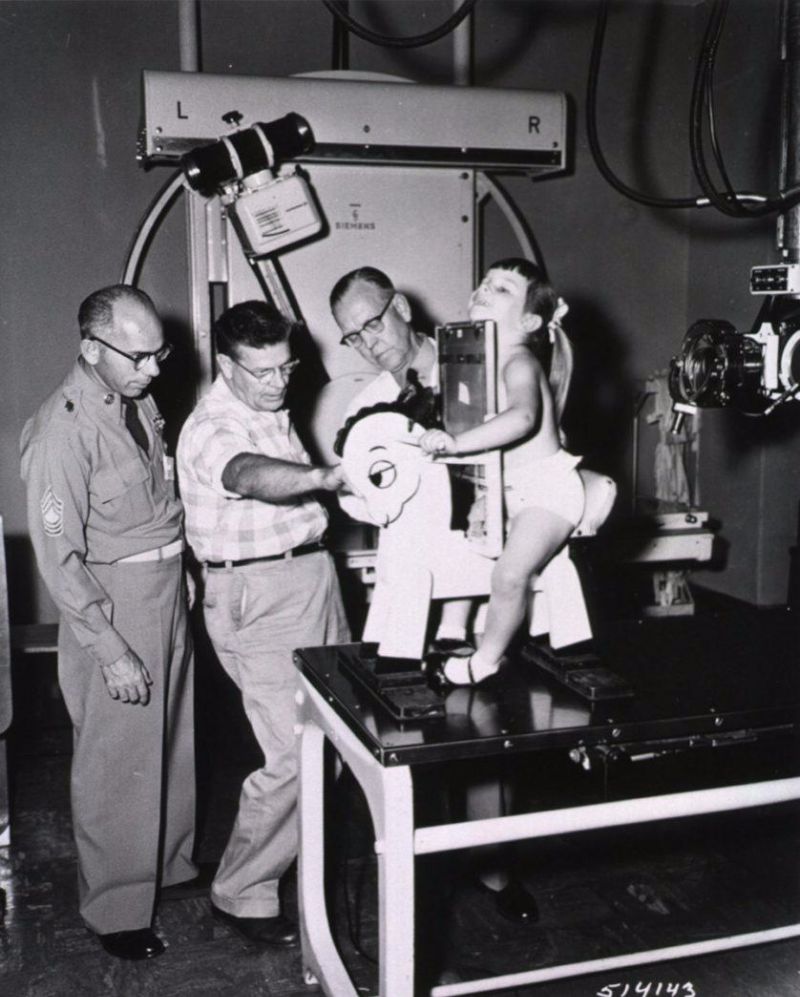 Roentgen steed, designed to hold children as they sit for chest X-rays, 1957. 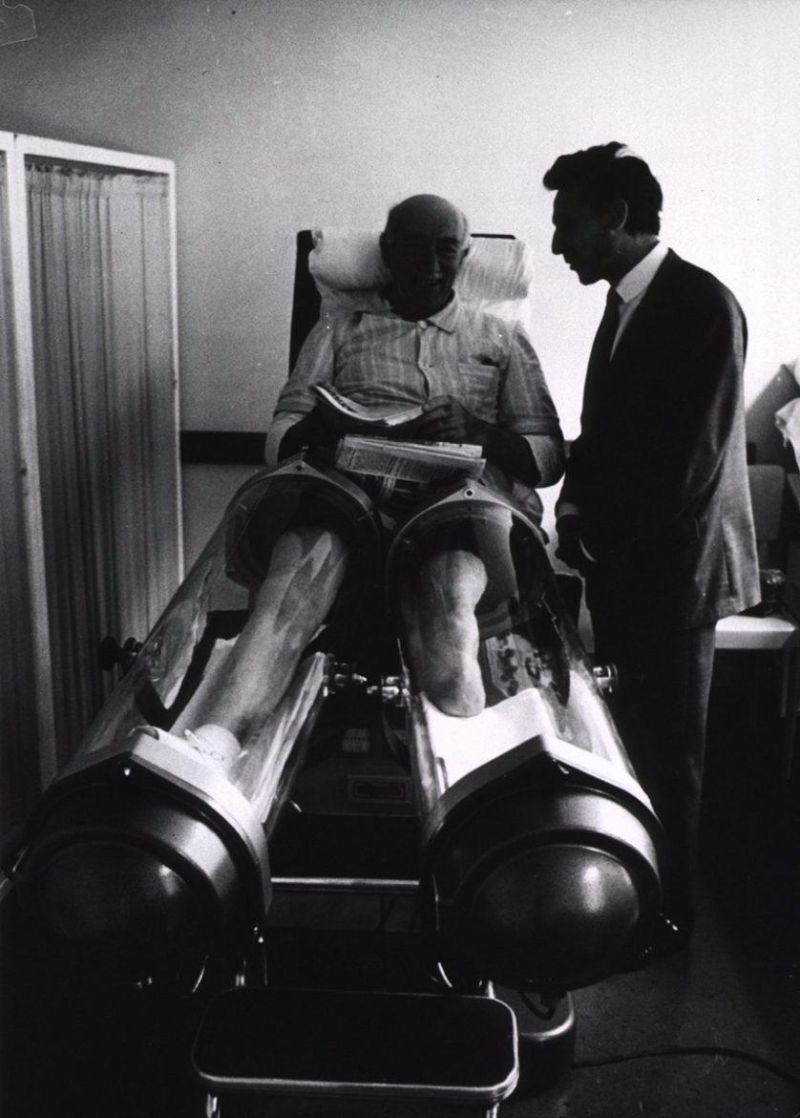 This old man is sitting in a machine that is used to stimulate blood circulation in the legs. 1950s. 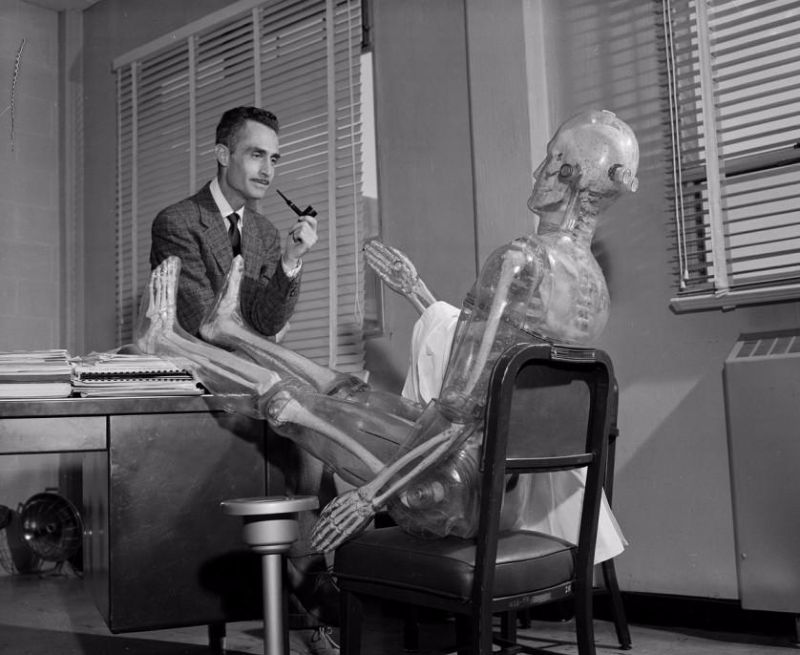 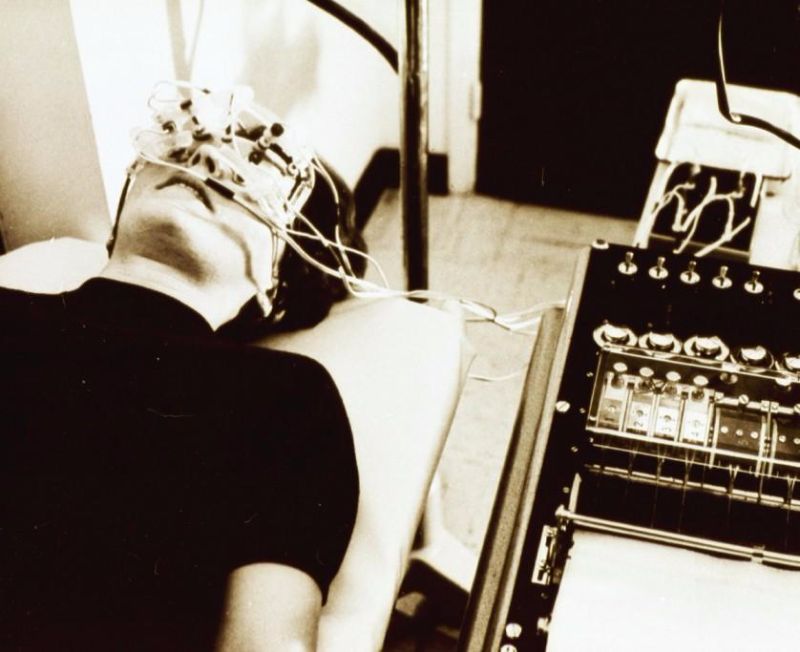 Electroretinogram: apparatus devised to measure the electric potential of the retina. 1930s.

The electroretinogram is still used today, but the early version of the device looks like something out of a science fiction horror movie.

The numerous wires going to the eyes make the woman in the photo either look like a cyborg being repaired or a victim under torture. 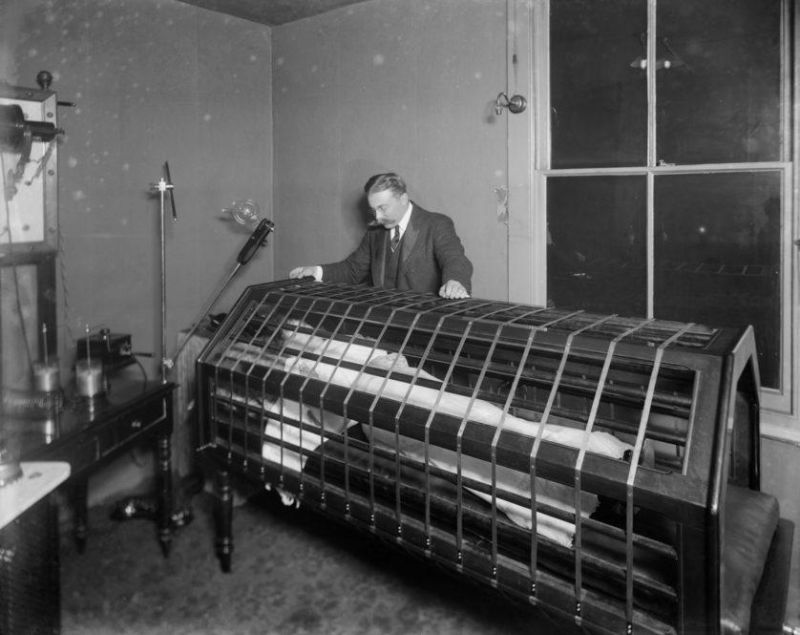 A woman inside an Electric Bath at the Light Care Institute. 1900s. 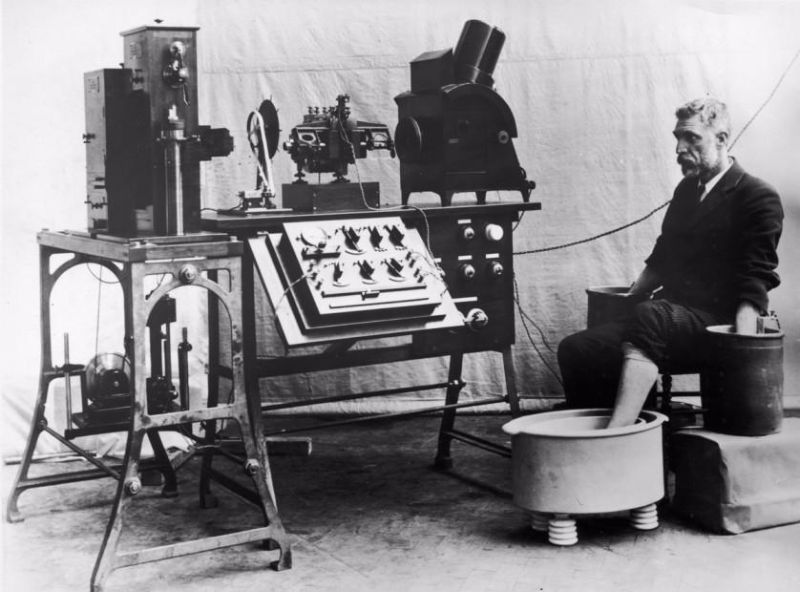 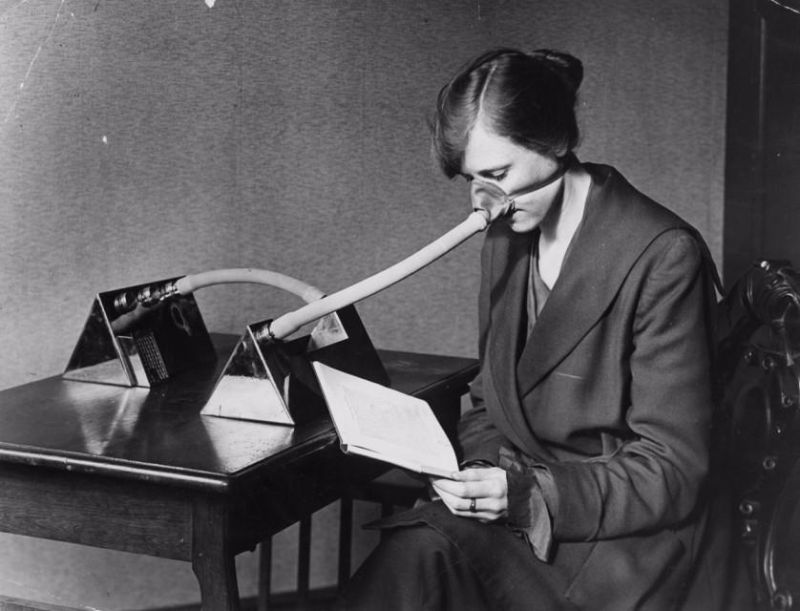 A woman wearing a flu mask during the flu epidemic after the First World War. 1919. 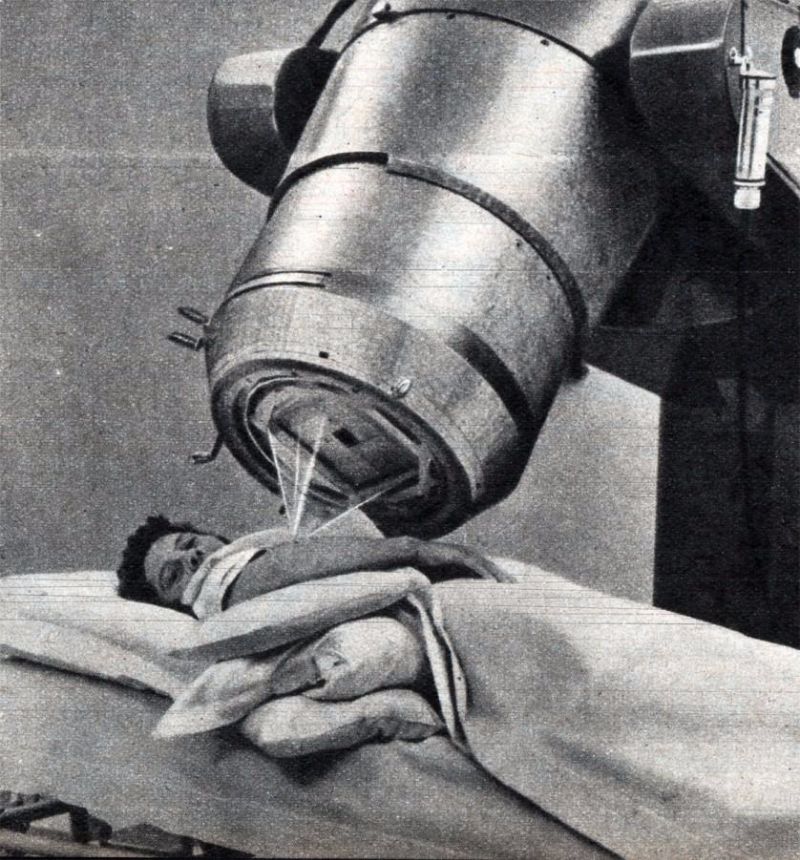 Cobalt “bomb” treatment of a patient at a Paris clinic. 1959.

A man inside an iron lung.

The coffin-like cabinet respirator, better known as the ‘iron lung’, was the state-of-the-art in life support technology in the first half of the 20th century.

The first iron lung was used at Boston Children’s Hospital to save the life of an eight-year-old girl with polio in 1928.

In technical terms, an iron lung is a type of negative pressure ventilator (NPV), a mechanical respirator which encloses most of a person’s body, and varies the air pressure in the enclosed space, to stimulate breathing.

It assists breathing when muscle control is lost, or the work of breathing exceeds the person’s ability.

Examples of the device include the Drinker respirator, the Emerson respirator, and the Both respirator. Iron lungs can be either manually or mechanically powered but normally are powered by an electric motor linked to a flexible pumping diaphragm (commonly opposite the end of the cylinder from the patient’s head).

Iron Lung displayed in a museum.

Larger “room-sized” iron lungs were also developed, allowing for simultaneous ventilation of several patients (each with their heads protruding from sealed openings in the outer wall), with sufficient space inside for a nurse or a respiratory therapist to be inside the sealed room, attending the patients.

Need for iron lu ngtreatment may result from diseases including polio and botulism and certain poisons (for example, barbiturates, tubocurarine).

The use of this medical device is largely obsolete in modern medicine, as more modern breathing therapies have been developed, and due to the eradication of polio in most of the world.

Mental patients participating in Dance Therapy in New York State Asylum, US in 1922.

Dr. Clark’s Spinal Apparatus, circa 1878, one of the more bizarre and least practical treatments for scoliosis.

The latest X-ray apparatus being operated by an radiologist wearing the old-type protectors which are no longer necessary with modern apparatus. Radiological exhibition. Central Hall. Westminster, 1934.

A “Lunatics Chair” given to patients who had poor behavior or wild outbursts in a Dutch mental hospital in 1938.

A man constrained in a straight jacket stands alone.

Physiotherapy used to be hands-off, seen here at Walter Reed, 1920.