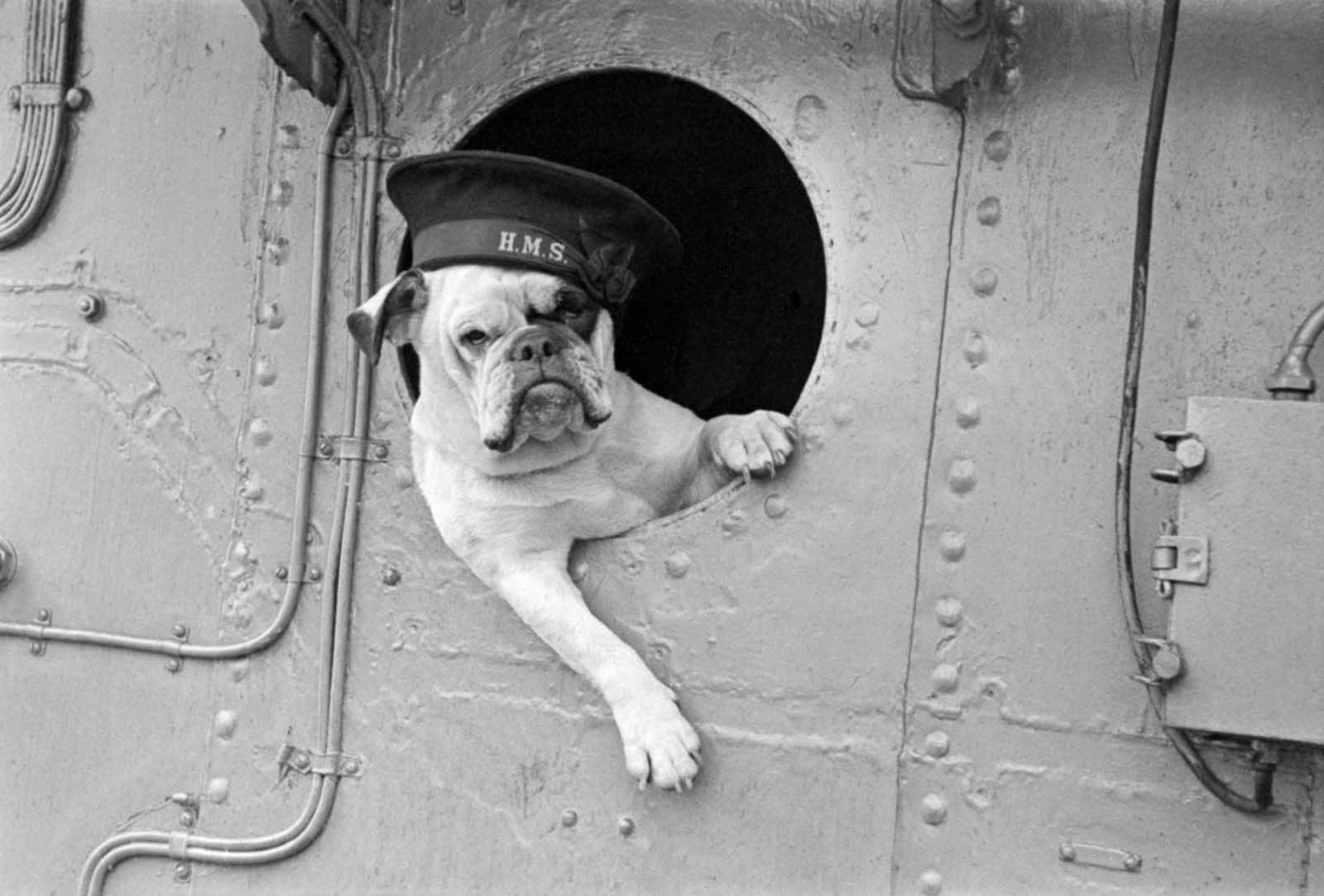 Venus the bulldog, the mascot of the destroyer HMS Vansittart.

These images are part of the book Weird War Two, a book from the Imperial War Museums that explores the stranger side of the Second World War. A war as extensive and long-lasting as World War II produces an incalculable number of artifacts.

And museums as big and well-stocked as the Imperial War Museums have plenty of the ones you’d expect to find: tanks, jets, helmets, guns, and the like. But there was a whole lot more to the war—and a surprising amount of it is, well, downright weird.

Weird War Two pulls the strangest items from deep within the IWM’s archives to offer a surprising new, wildly entertaining angle on the war.

From wacky inventions such as flying jeeps and bat bombs to elusive secret agents, from wholly bizarre propaganda posters to a dummy whose role as a decoy enabled a daring escape, and from inflatable tanks to painted cows—really—Weird War Two reminds us that human ingenuity is boundless, yet at the same time that usually means that truth ends up stranger than fiction. 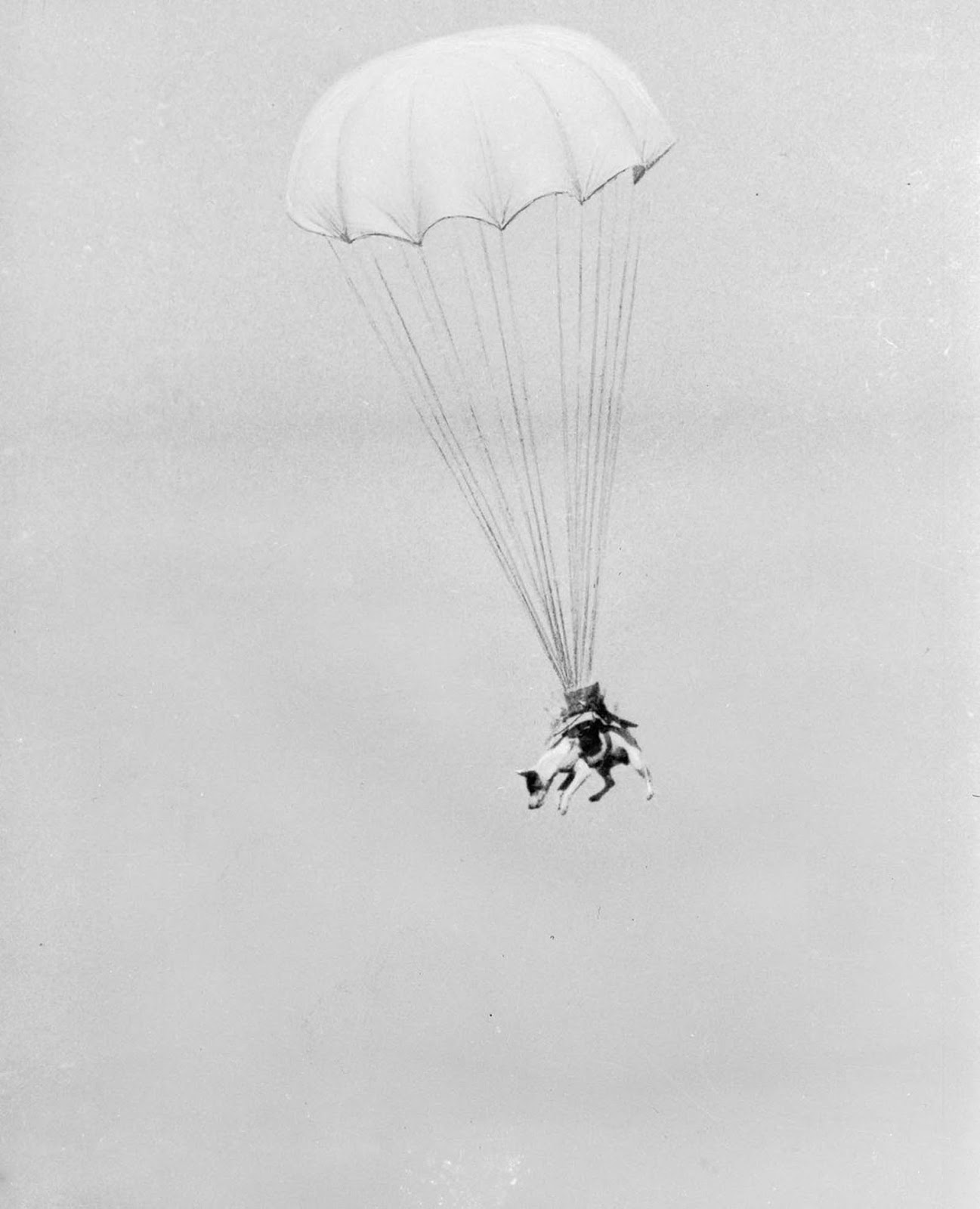 Salvo the “Paradog” completing a parachute jump during training. Dogs accompanied D-Day troops dropped behind enemy lines, sniffing out mines, traps, and troops. They were given two months’ intensive training, including how to angle themselves in the air —”forepaws up and rear legs down.” On the day of the drop some dogs had to be encouraged out of the plane with the aid of a two-pound chunk of meat. 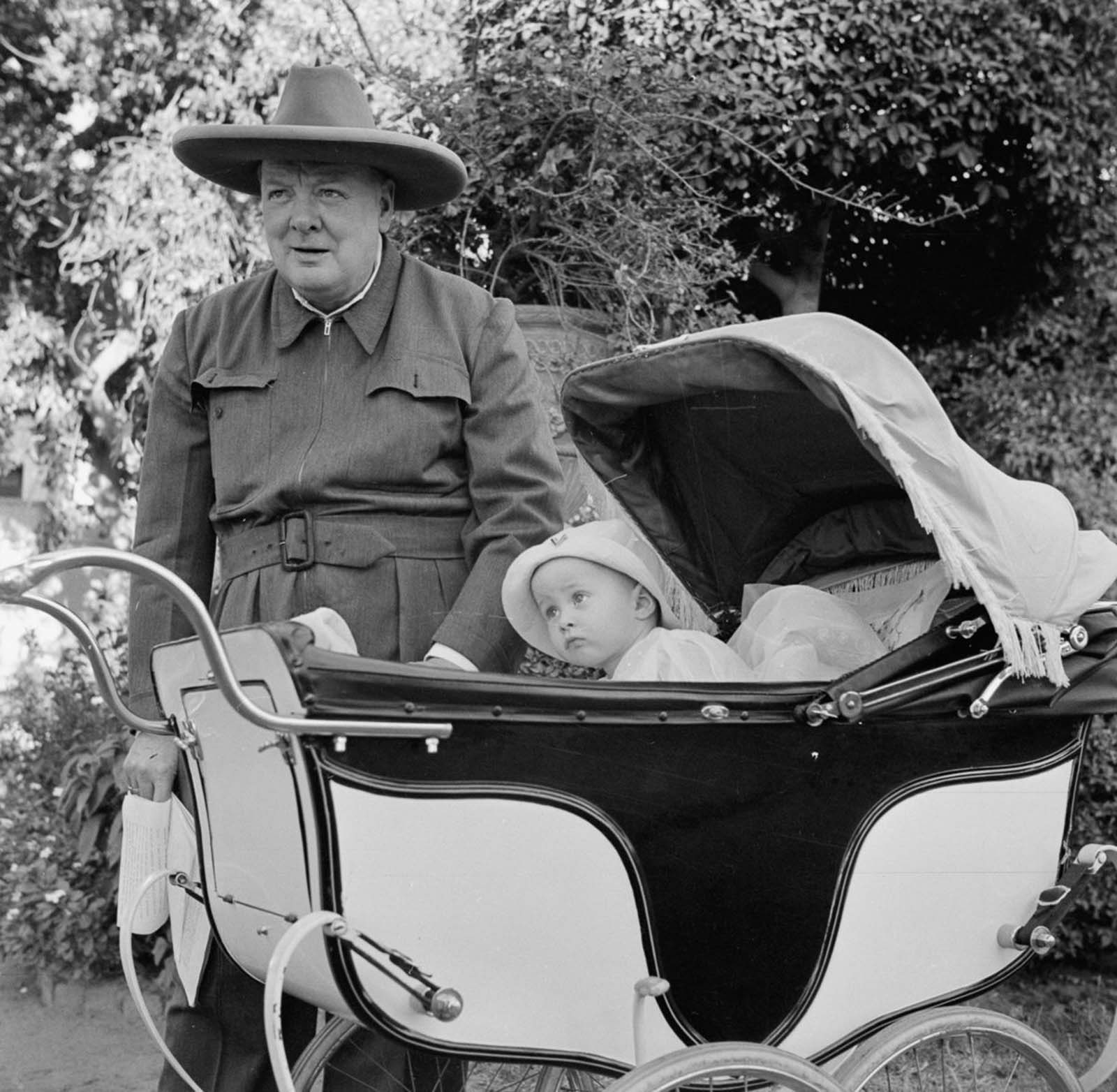 Winston Churchill with baby Victor Lampson. Churchill is wearing an all-in-one “siren suit” of his own invention, designed to be quickly donned over his clothes in the event of an air raid. He had onesies for all occasions, from military-style to flamboyant denim, pinstripe, and even velvet. 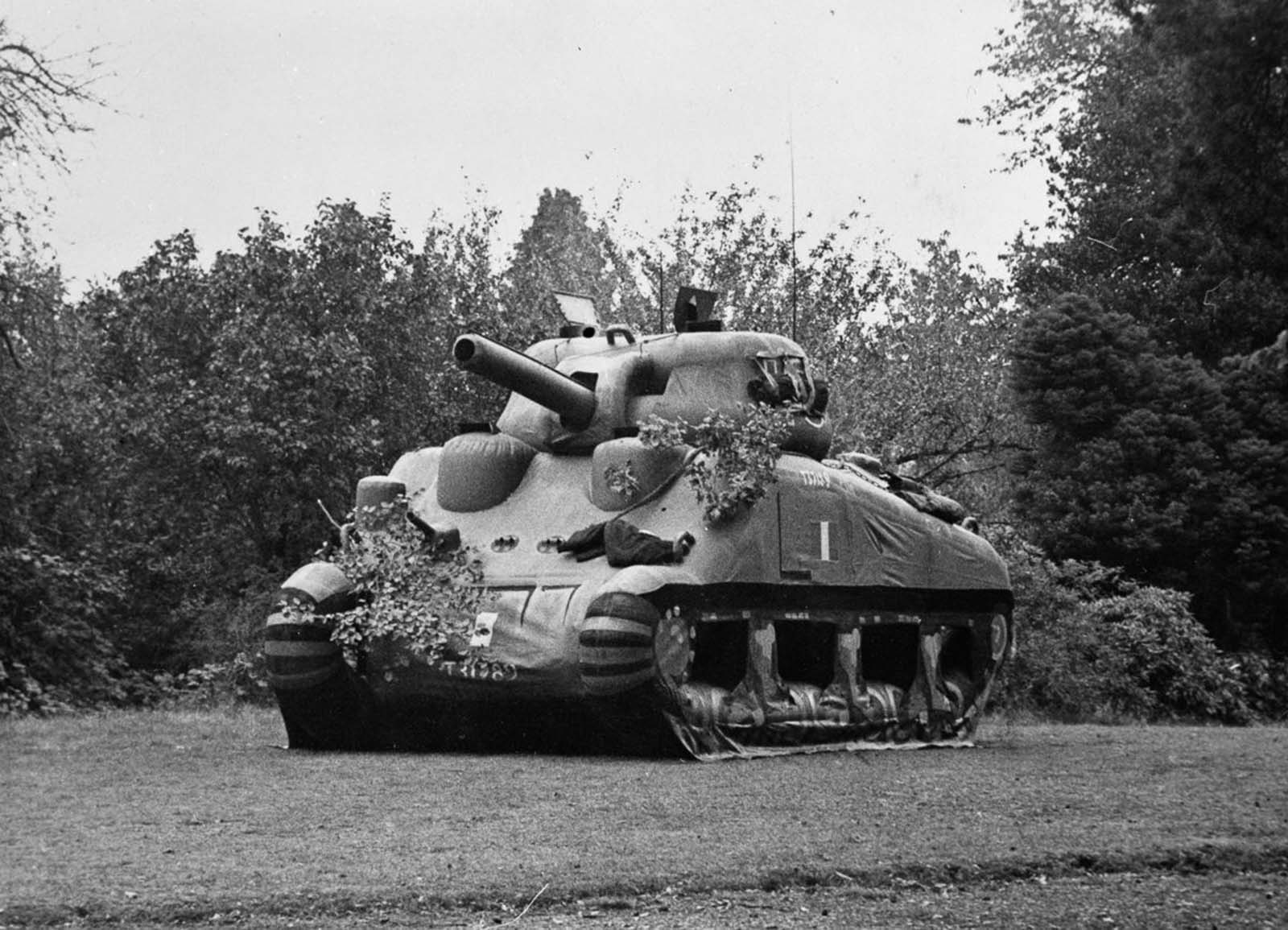 An inflatable Sherman tank, one of many dummy tanks made to deceive the enemy. Dummy tanks were used as part of Operation Fortitude, the scheme to convince the Germans that the D-Day landings would be at Calais rather than Normandy. 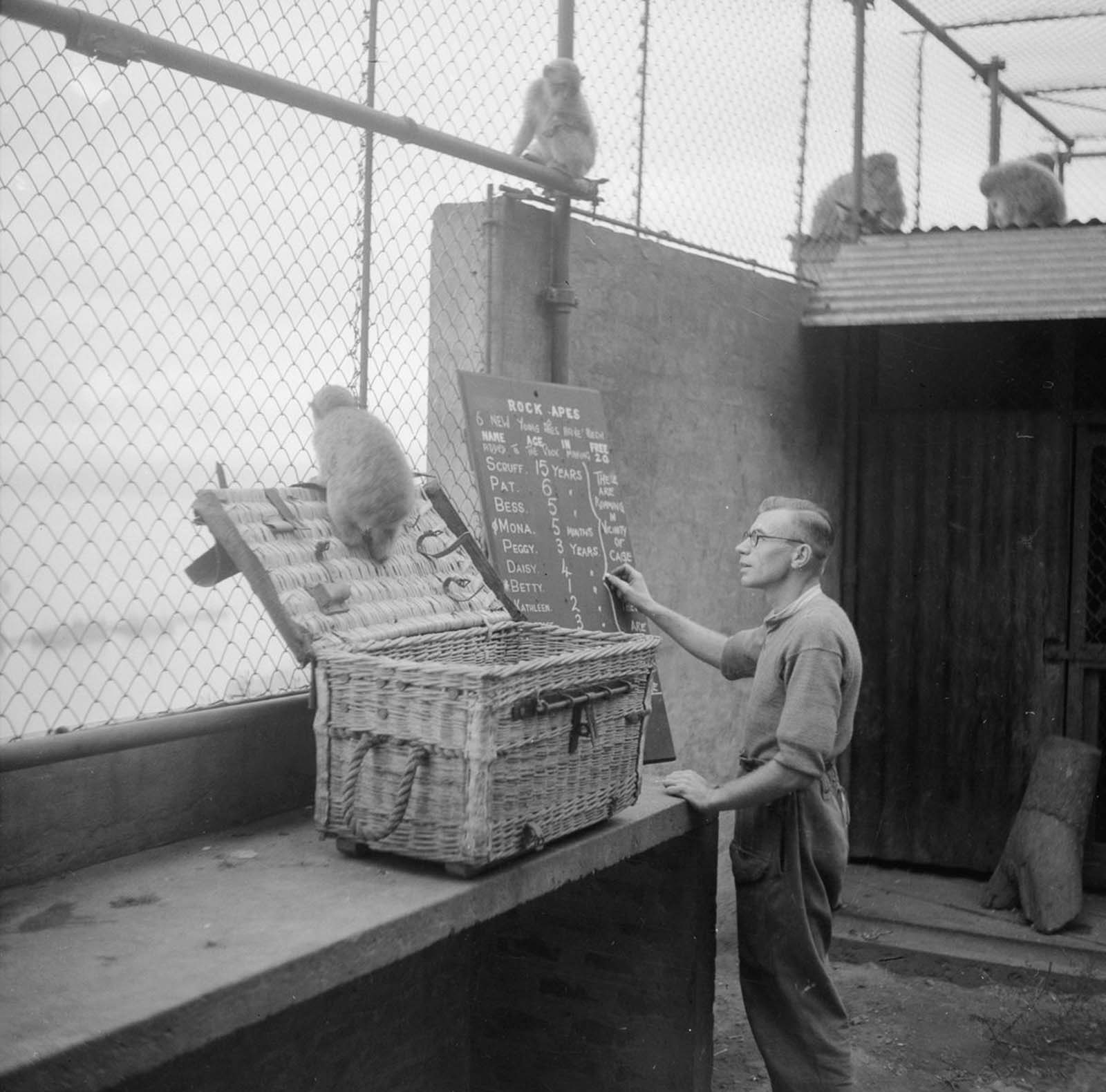 Apes are checked in at Gibraltar. Churchill had heard a legend that if the apes ever left the rock, Gibraltar would cease to be a British colony, so he sent in shipments of primates to forestall that. 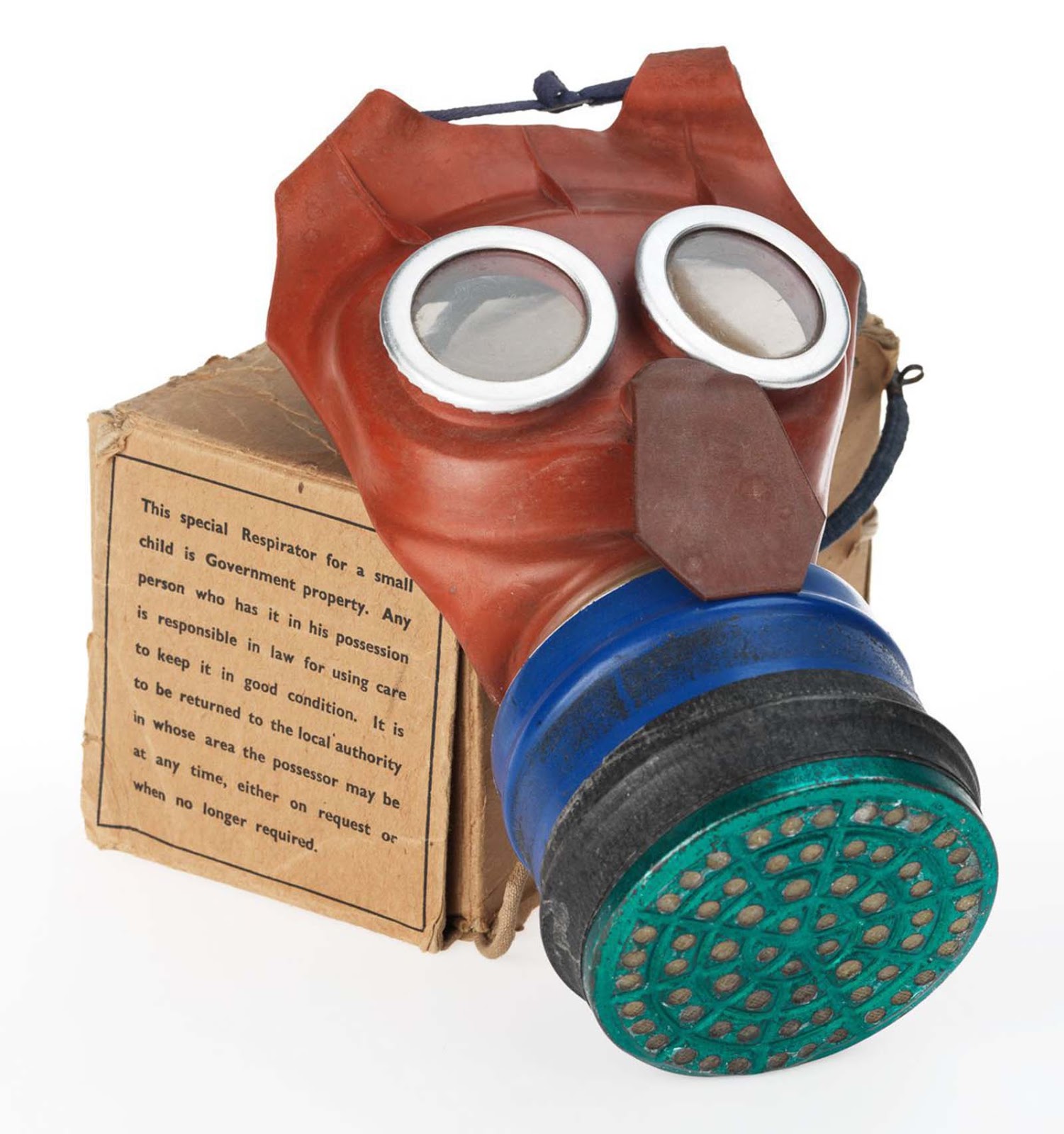 A colorful “Mickey Mouse” gas mask designed to be less intimidating for children to wear. Children found they could amuse themselves by blowing through the respirator to produce a loud farting noise. 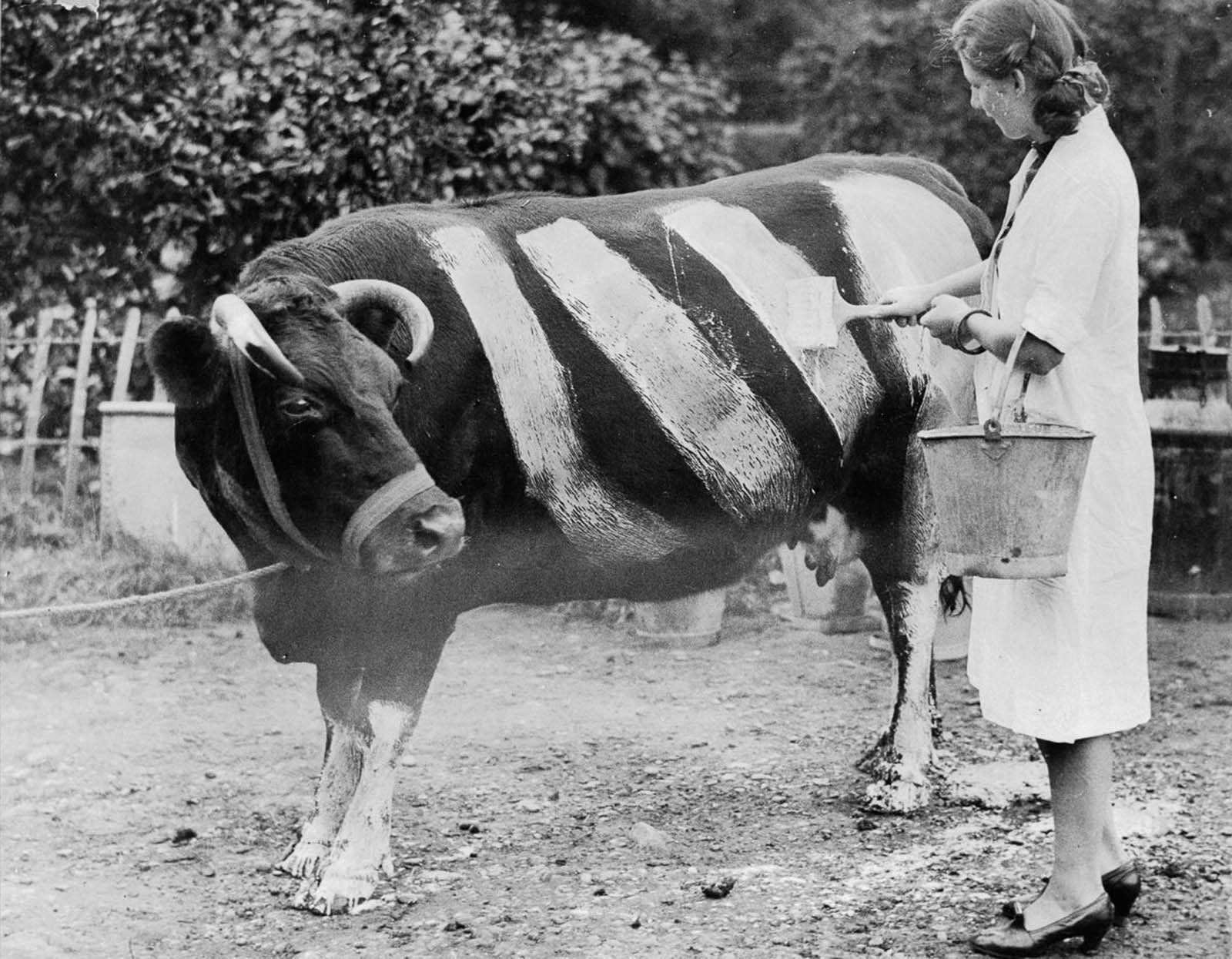 A farmer paints stripes on her cow to increase its visibility at night and prevent car accidents should it wander onto the road during blackout conditions. 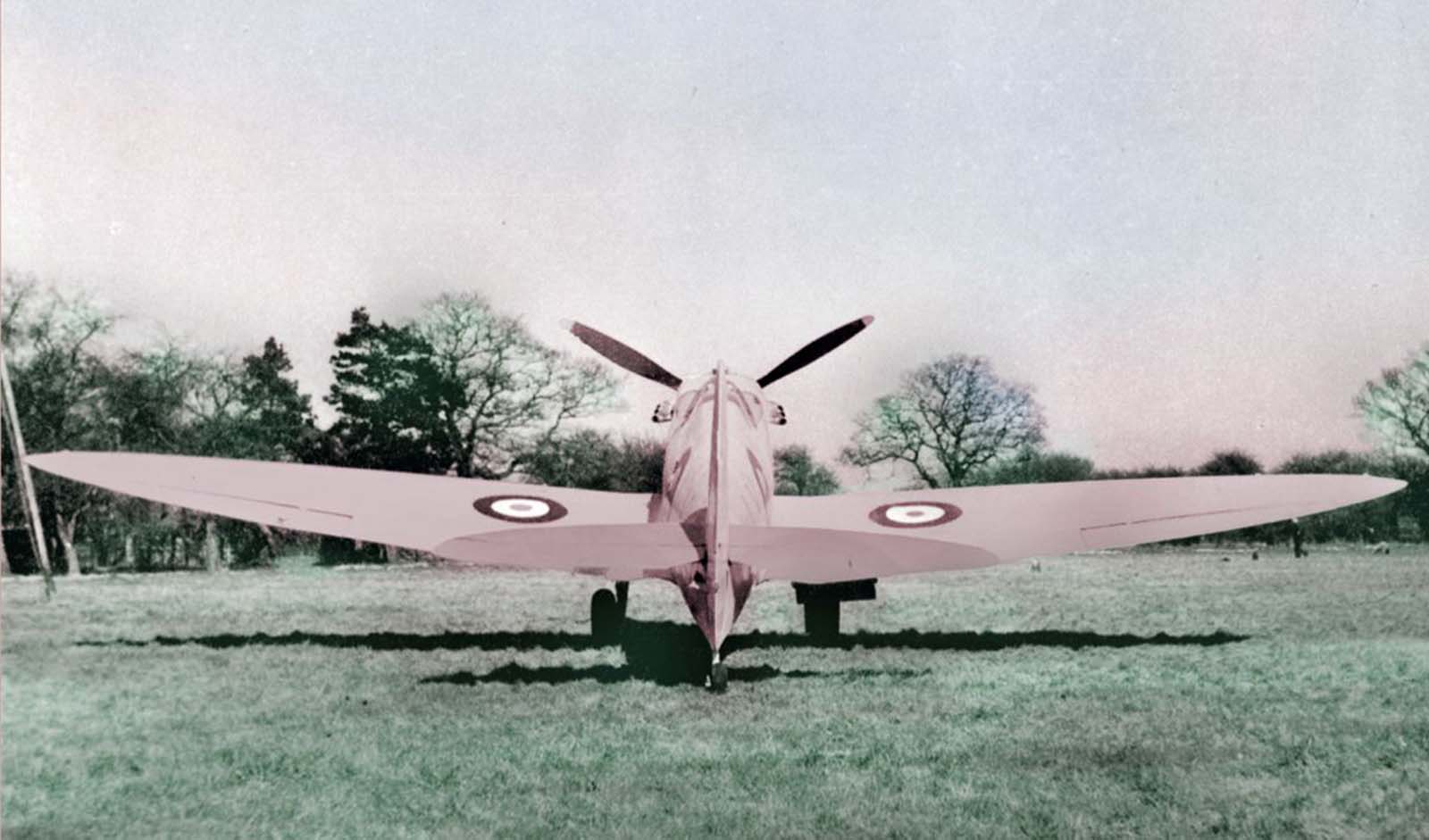 Spitfires used for photo reconnaissance missions during the day were usually painted blue, but those that went out at dusk or dawn were painted “Camoutint Pink” to blend better with the sky. 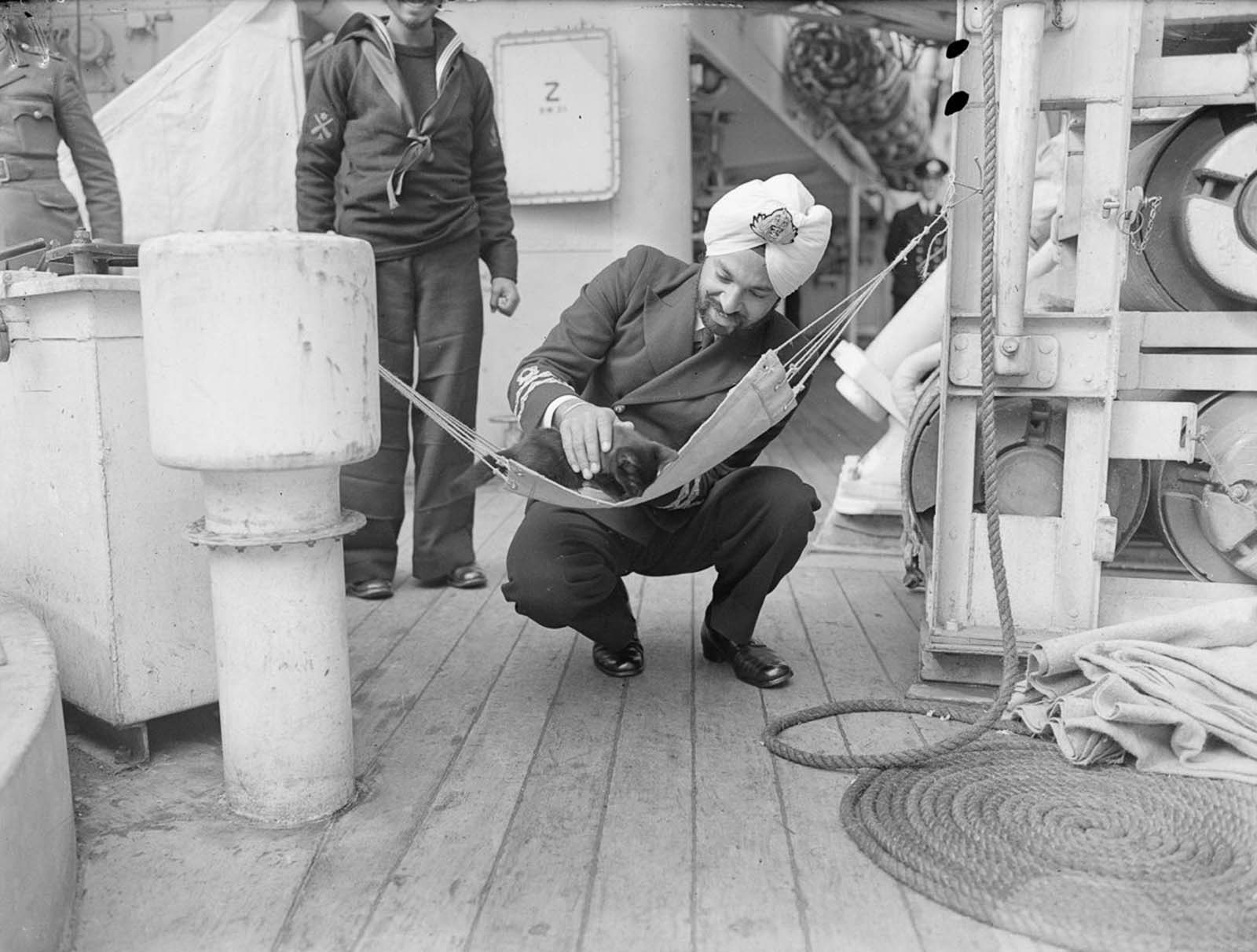 A Persian kitten takes a break from hunting rats in a specially made hammock aboard the sloop HMS Godavari. 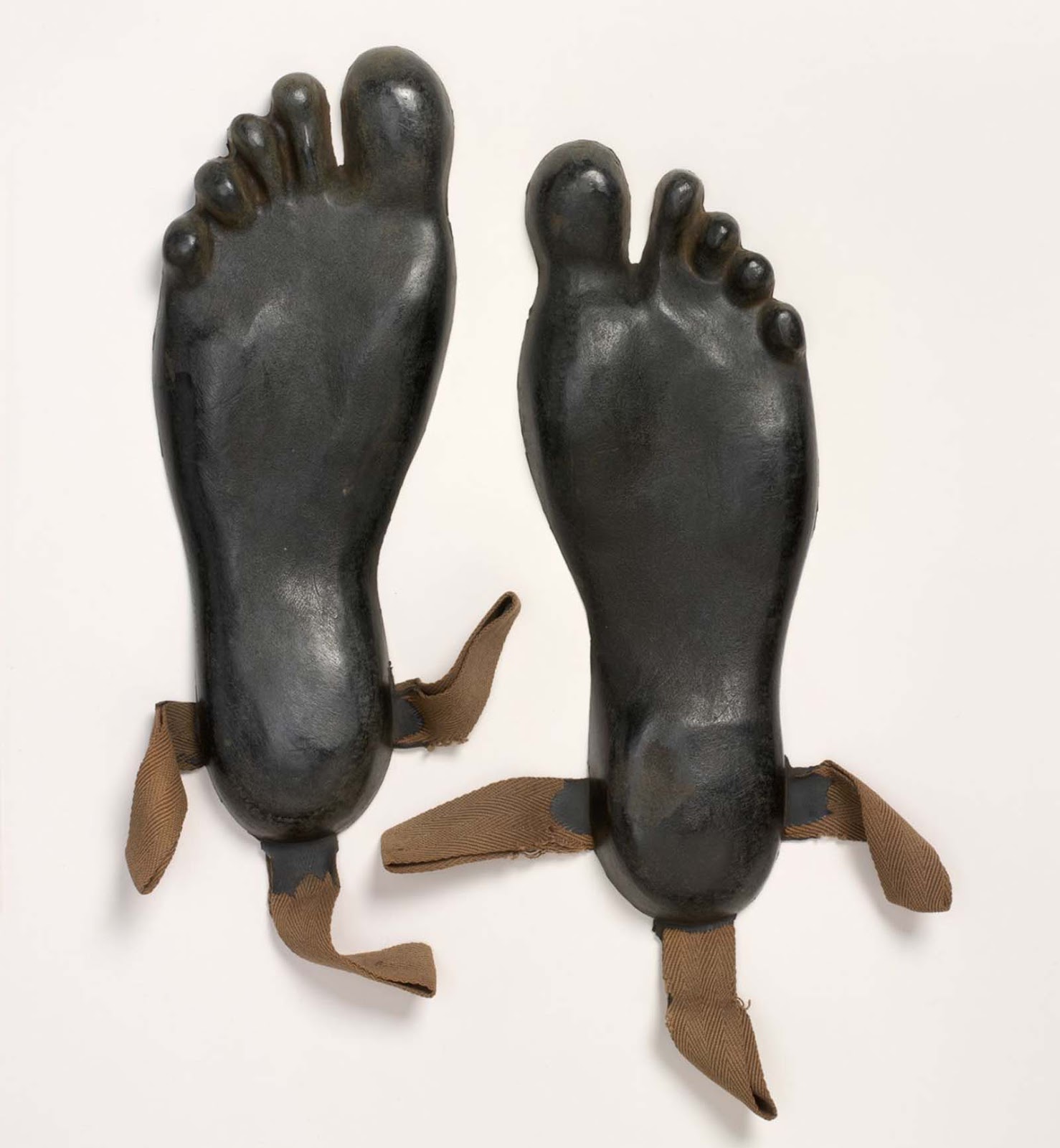 These overshoes were made for Britain’s Special Operations Executive (SOE) agents operating in Asia and the Pacific. When the agent landed on a beach from the sea, the “footprints” were intended to fool the Japanese into thinking that he was a barefoot native. 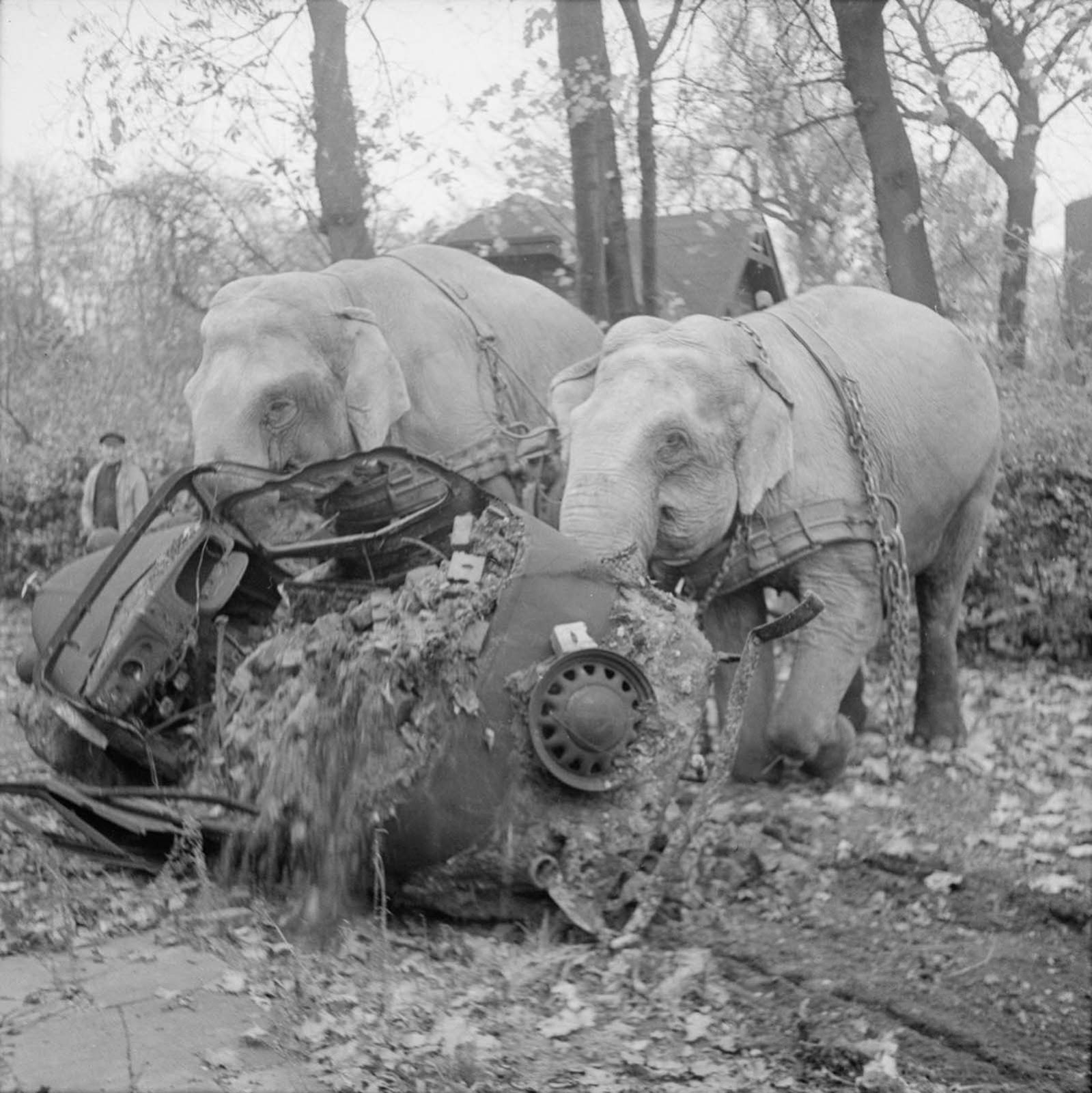 Circus elephants Kiri and Many clear a wrecked car from a street in Hamburg. Both elephants were used by the civil authorities to clear wreckage during and after the war.