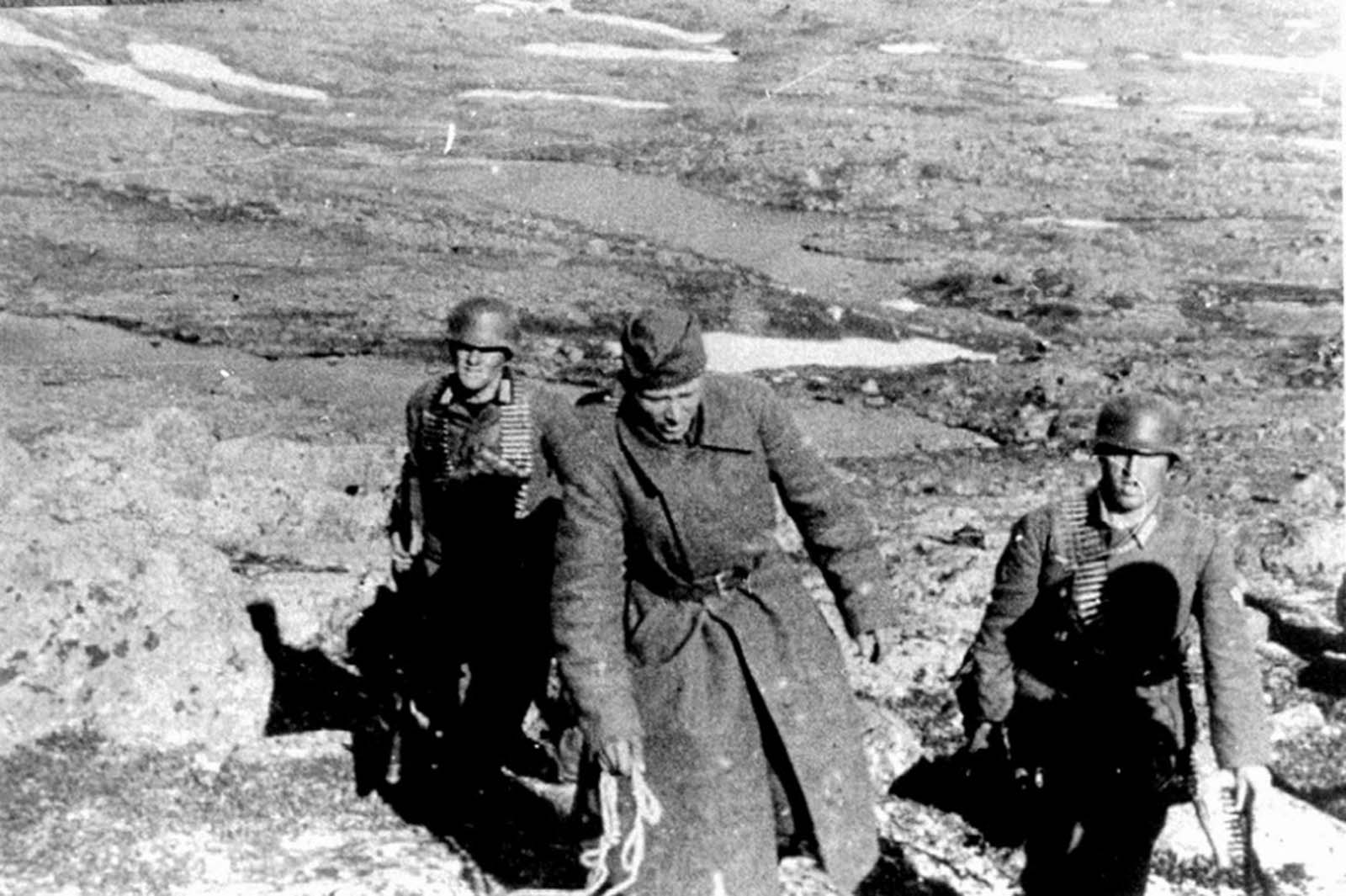 The picture above was taken on June 30, 1941 and shows German mountain troops and of the Russian prisoners.

It was the night of June 29, 1941, in the foothills of Murmansk, Soviet Union. Commander Oberleutnant Rode ordered some officer candidates “Gruppe Ostermann” to climb “Ridge Musta” to a height of 122m and scout the situation and then report back to him and his company back down below.

Right after they disappeared past the crest of some cliffs, Rode and his men heard grenade explosions and heavy small arms fire, then all went quiet.

On June 30, 5 am the next morning, Rode ordered more Jäger troops up the mountain under cover of the morning fog, who encountered Russian soldiers in a close combat gunfight.

They were Russians of the 136th Infantry Regiment, 14th Infantry Division of the Red Army. Some had pretended to be dead and shot some Germans while they approached.

Nonetheless, the fight was over after 6 hours, which led to 2 Russian troops being captured. Gruppe Ostermanns status had been officially unknown until a wounded scout had jumped from the cliff into the lake below.

He relayed the info to Rode and the Gebirgstruppe, telling how the Russians killed the entire group, taking no prisoners. By now, the fate of the two captured Russians was sealed. 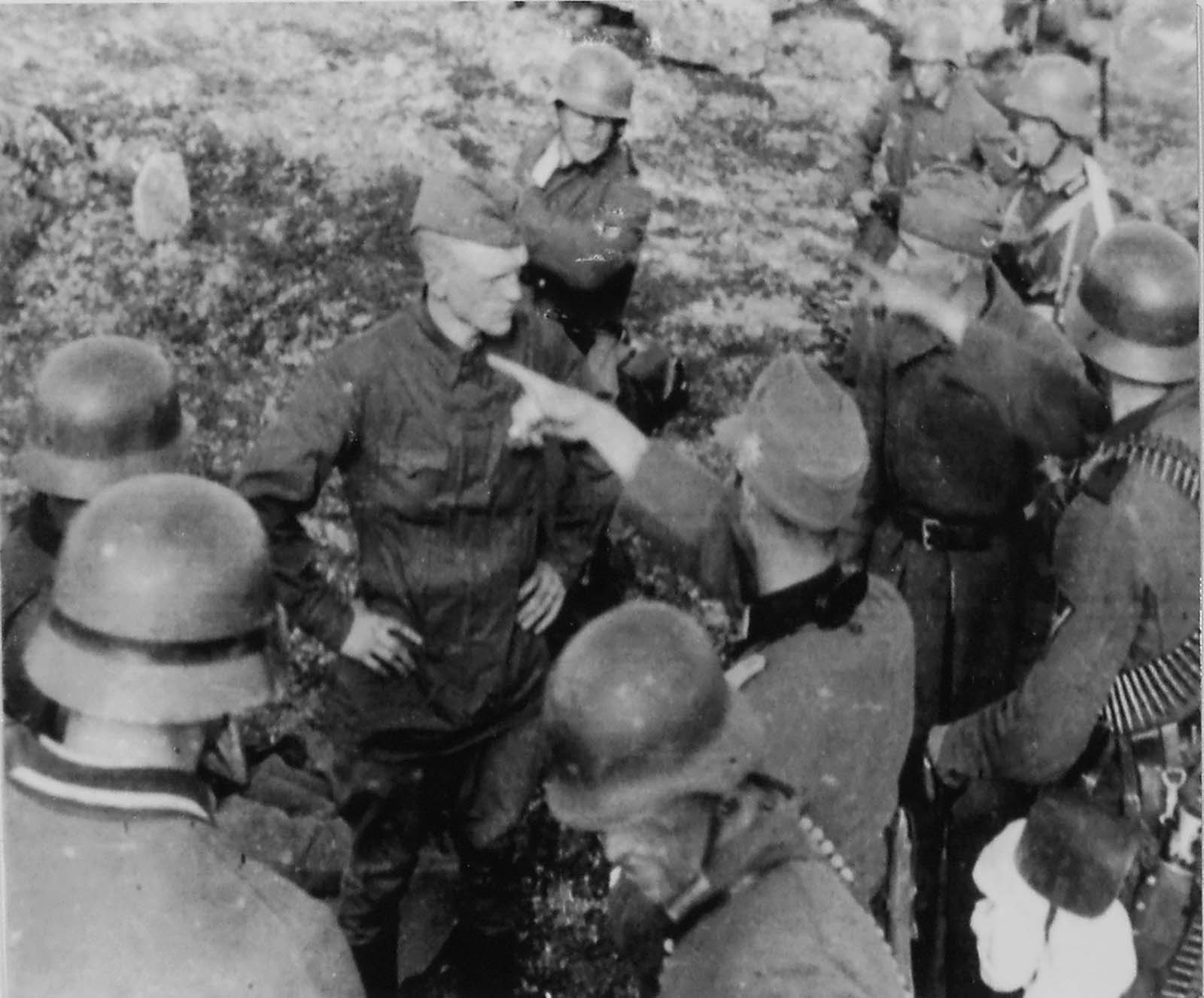 Here we see one of the Russians being interrogated while the Germans don’t seem too happy.

The account from the German side: “Fierce hand to hand combat began with an enemy that defended from behind boulders and well-disguised positions.

Several Russians pretended to be dead, in order to resume firing in our backs. For our own safety, it was not possible to take prisoners, and the battle could only be ended by complete annihilation of the enemy.

At 6:15, the height was in the hands of the second company. Soldiers from Osterman’s group were all found brutally killed. The only survivor, a wounded man who saved himself by jumping into a small lake, described how the Russians ruthlessly executed men from the scout group that remained after the battle.

All of our men were repulsed by this cruel method of fighting. Two captured Russians that were taken in the battle were executed after a short trial”. 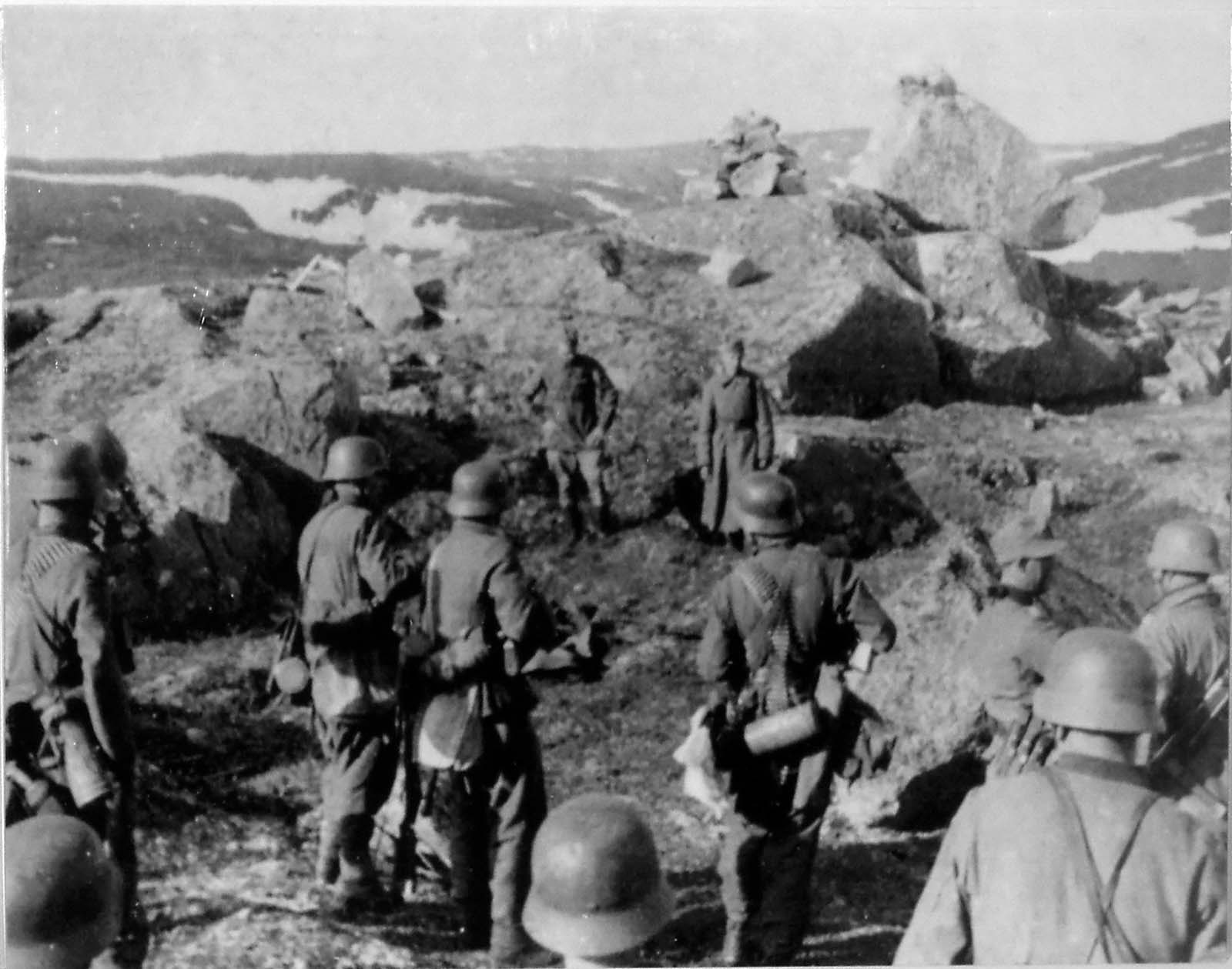 It was unanimously decided to shoot the two Russian prisoners, and Oberleutnant Rode gave the order to carry out the sentences.

It was unanimously decided to shoot the two Russian prisoners, and Oberleutnant Rode gave the order to carry out the sentences. The pictures show the two Russians standing bravely, knowing what is to come next.

Barely a week into the war, and these men’s lives were ended. They would lay there for 70 years until a group of Murmansk searchers found the place of execution and the remains of the dead in 2013. 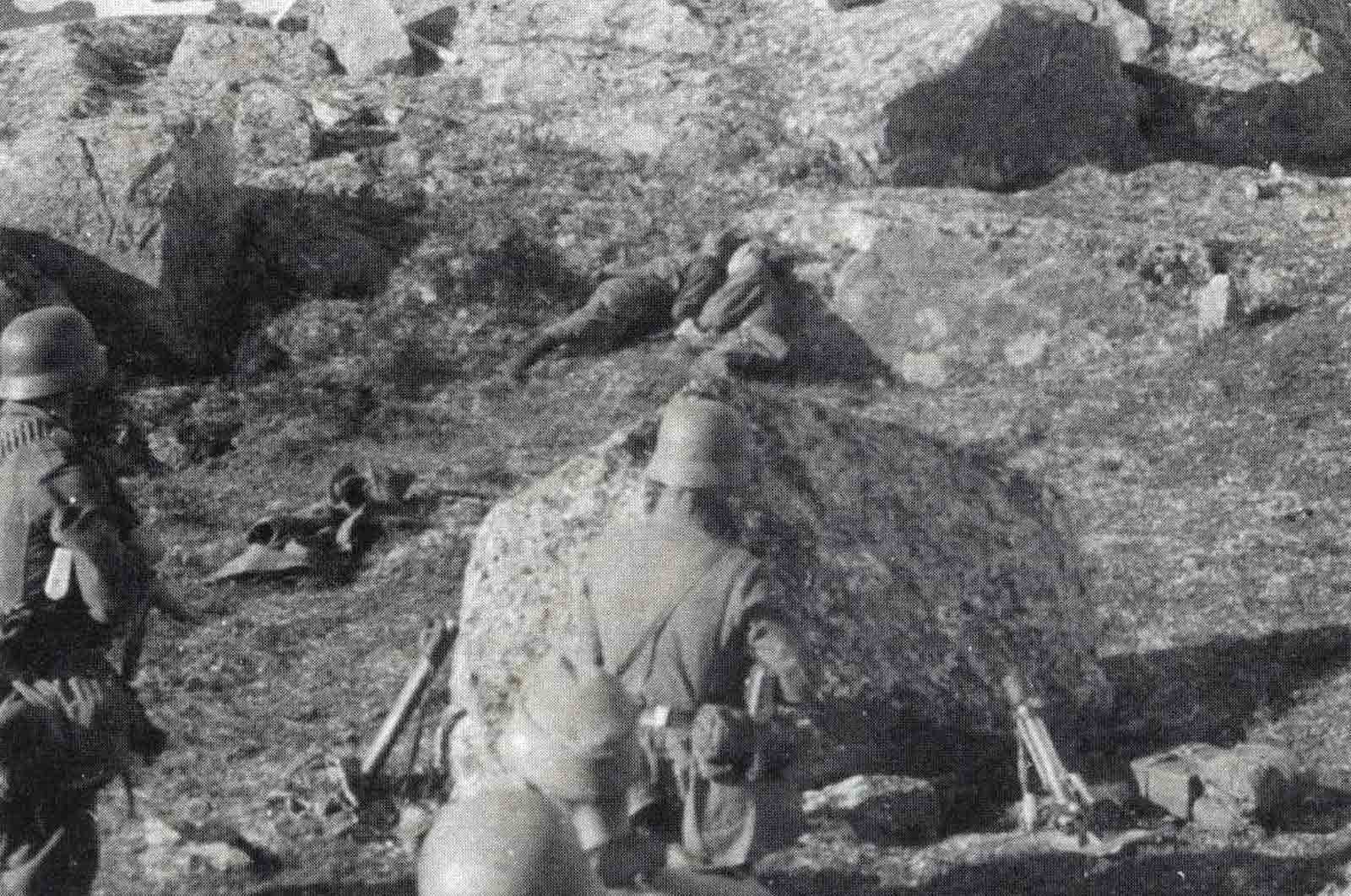 The Russians lie dead after being executed.

One of the Russian soldiers was identified as Private Sergey Korolkov, born 1912 , the birthplace Kirov region, Velikoluksky area, Serezhinsky farmland, village Hmelishche. He entered service in the Soviet Army on June 22nd, 1941, a week earlier.

The other soldier is still unknown. There is an assumption that he is the Soviet junior officer. In this short fight in the first week of the war in Russia, 16 soldiers were killed, 11 wounded. 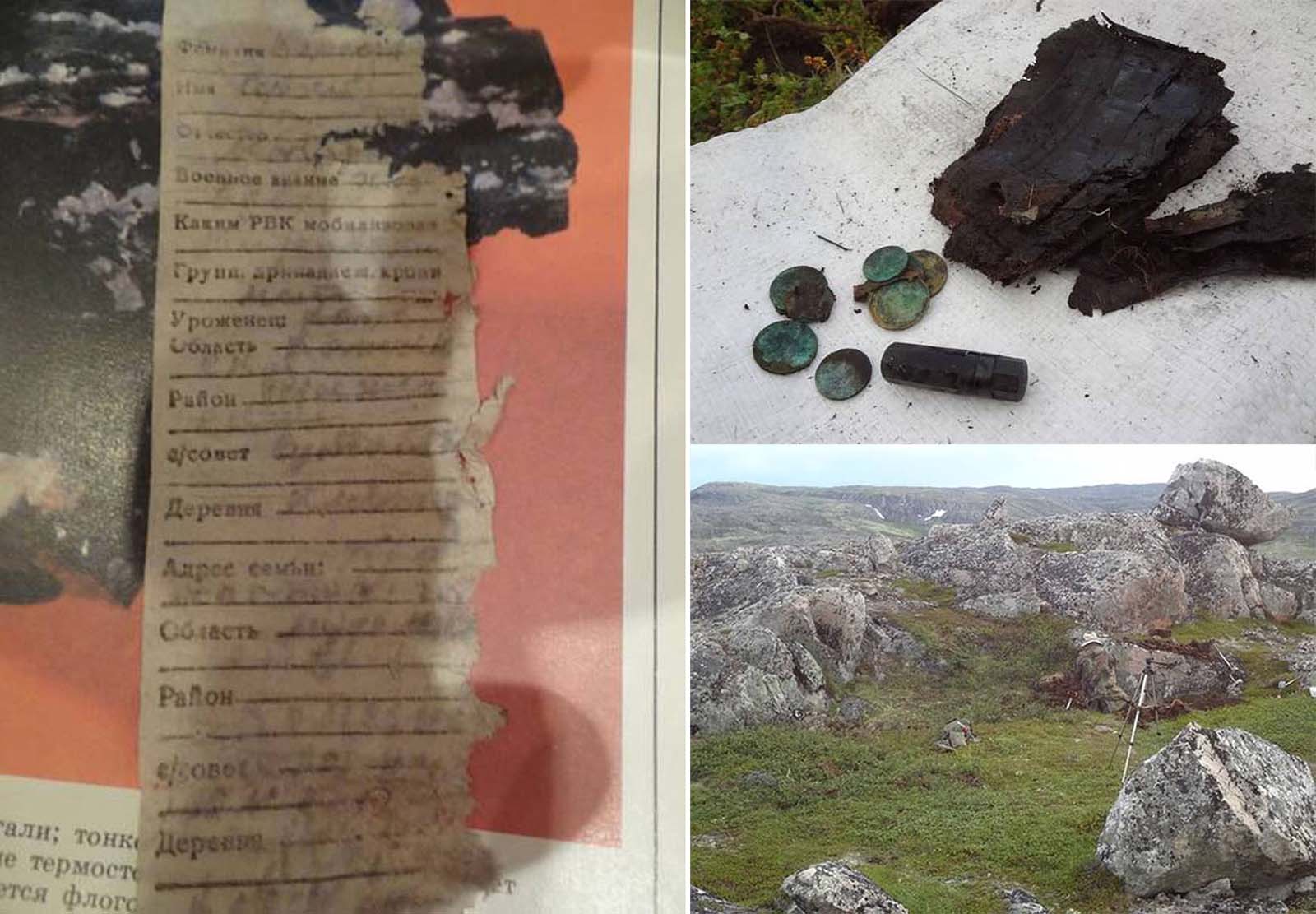 The remains of Soviet soldiers were lying on the tundra of the Arctic Circle for more than 70 years. They were found and buried in the summer of 2013.