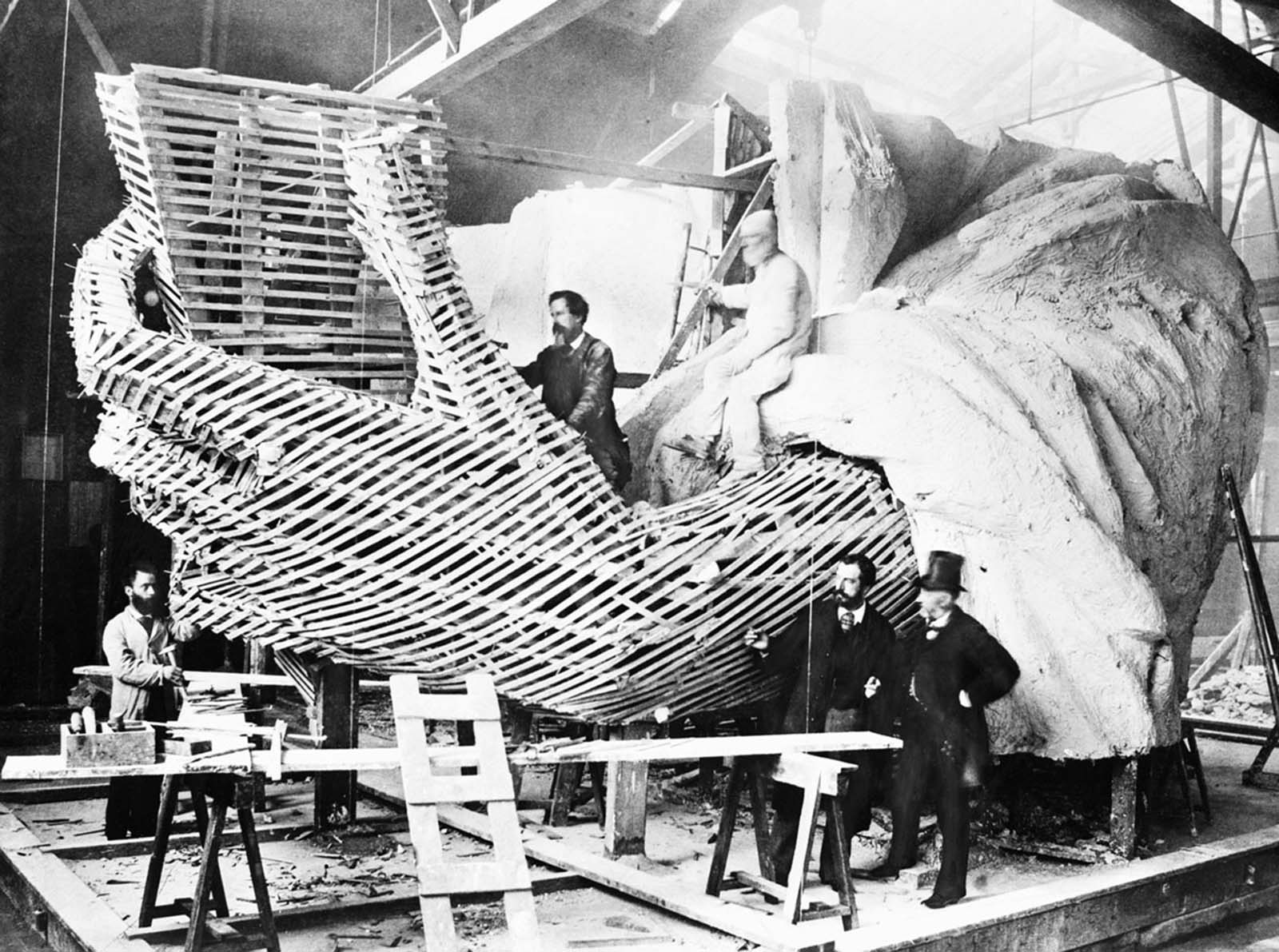 An 1875 image of Frédéric-Auguste Bartholdi, the creator of the Statue of Liberty, posing with a visitor while the statue was under construction inside a Paris studio.

The Statue of Liberty, officially Liberty Enlightening the World, designed by Frédéric Auguste Bartholdi and Gustave Eiffel, was a gift to the United States from the people of France in 1886.

With a tablet inscribed with the date of America’s independence, a broken chain beside one foot symbolizing the abolition of slavery, and a guiding light held up for the world to see, the structure is loaded with symbolism.

The sonnet “The New Colossus,” written by Emma Lazarus for the statue, reads in part: “Here at our sea-washed, sunset gates shall stand / a mighty woman with a torch, whose flame / is the imprisoned lightning, and her name / Mother of Exiles.”

The statue has stood watch over New York Harbor for more than 130 years, as the nearby city skyline evolved and grew dramatically. Gathered on this article, images of the Statue of Liberty, inside and out, from her birth in Paris to the present day.

The Statue of Liberty is a figure of Libertas, a robed Roman liberty goddess. She holds a torch above her head with her right hand, and in her left hand carries, a tabula ansata inscribed in Roman numerals with “JULY IV MDCCLXXVI” (July 4, 1776), the date of the U.S. Declaration of Independence. 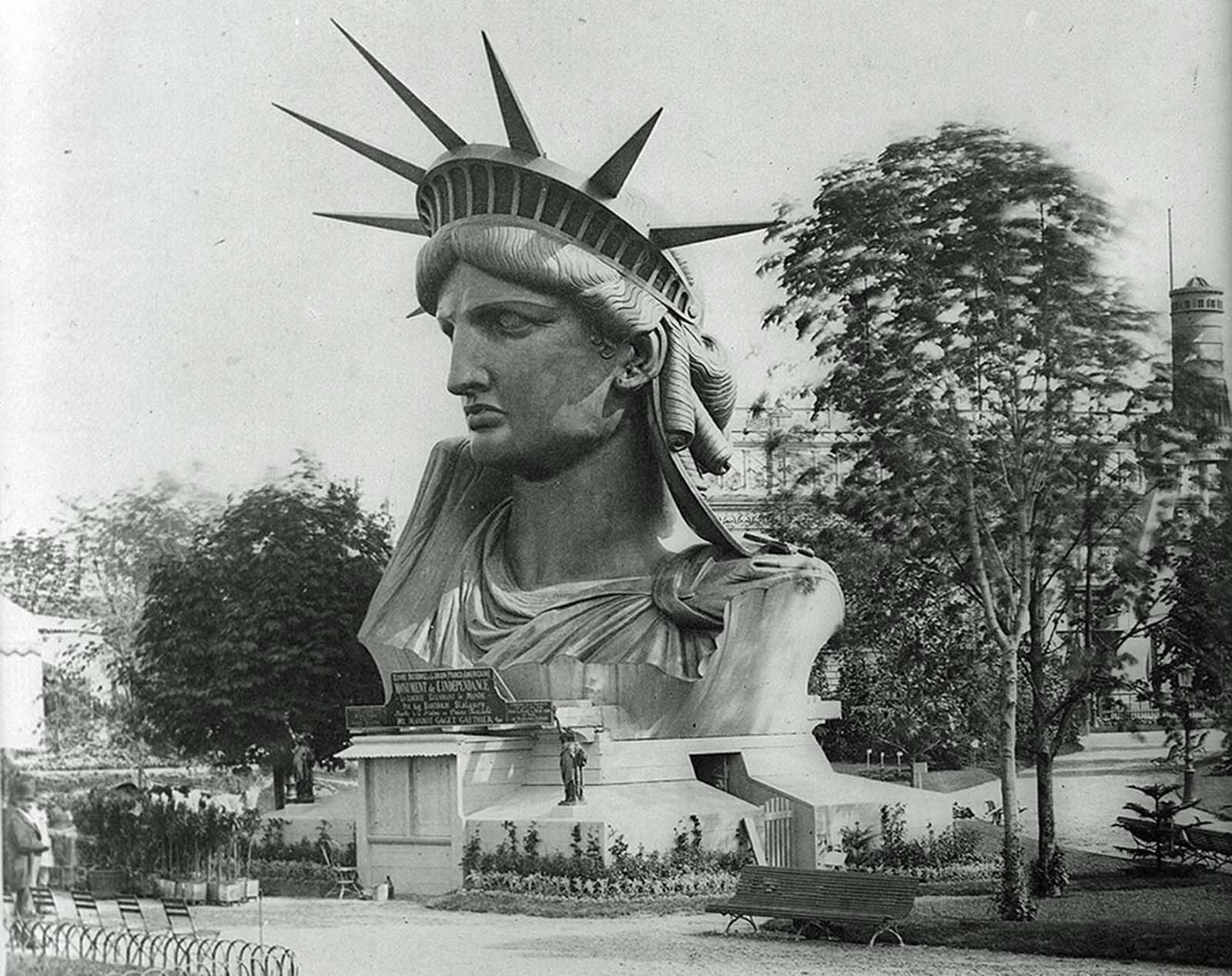 The head of the Statue of Liberty, on display in a park in Paris, France, in 1883.

A broken shackle and chain lie at her feet as she walks forward, commemorating the recent national abolition of slavery. Bartholdi was inspired by a French law professor and politician, Édouard René de Laboulaye, who is said to have commented in 1865 that any monument raised to U.S. independence would properly be a joint project of the French and U.S. people. Because of the post-war instability in France, work on the statue did not commence until the early 1870s.

The statue was administered by the United States Lighthouse Board until 1901 and then by the Department of War; since 1933 it has been maintained by the National Park Service as part of the Statue of Liberty National Monument. Public access to the balcony around the torch has been barred since 1916. 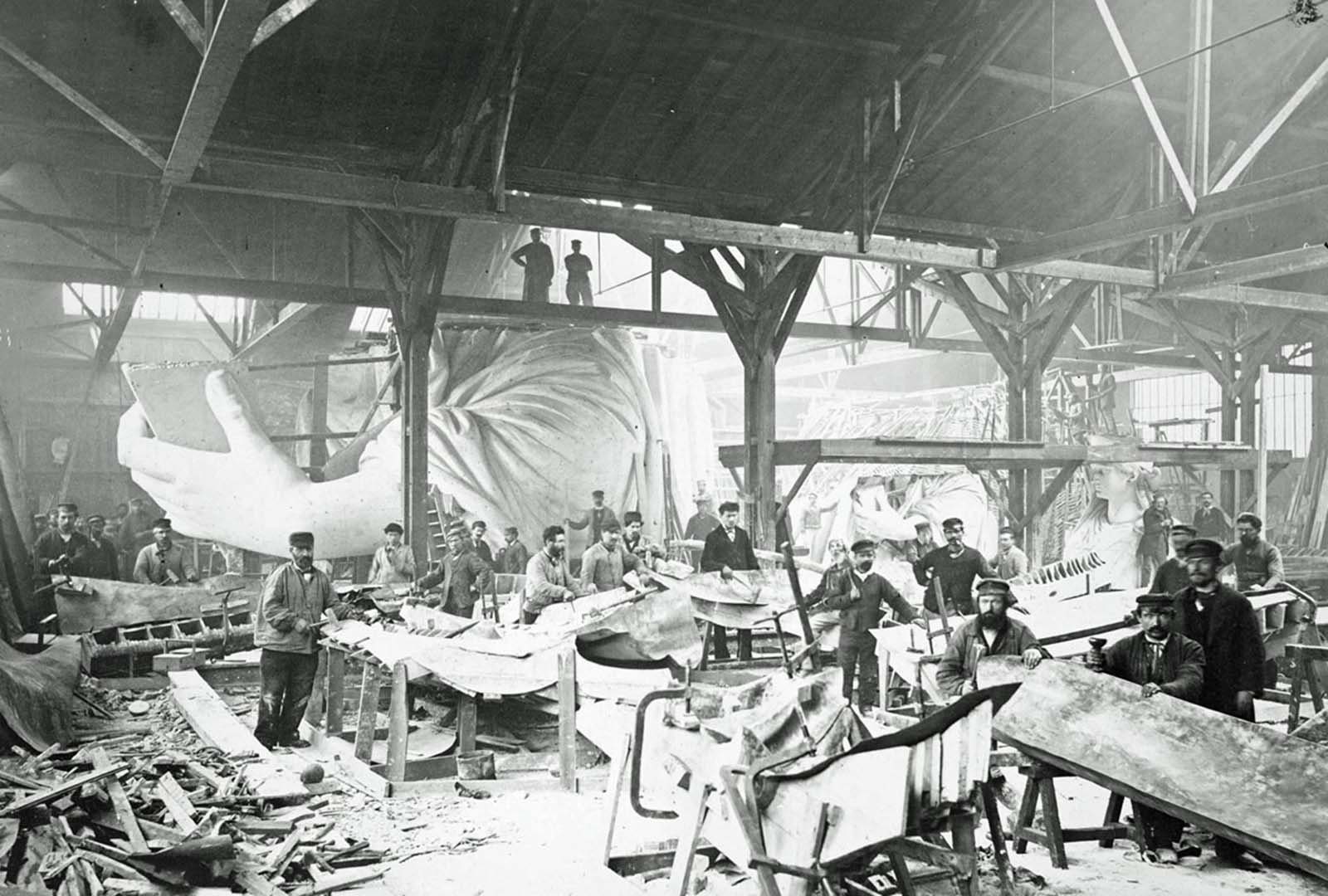 Men in a workshop hammer sheets of copper for the construction of the Statue of Liberty in 1883. 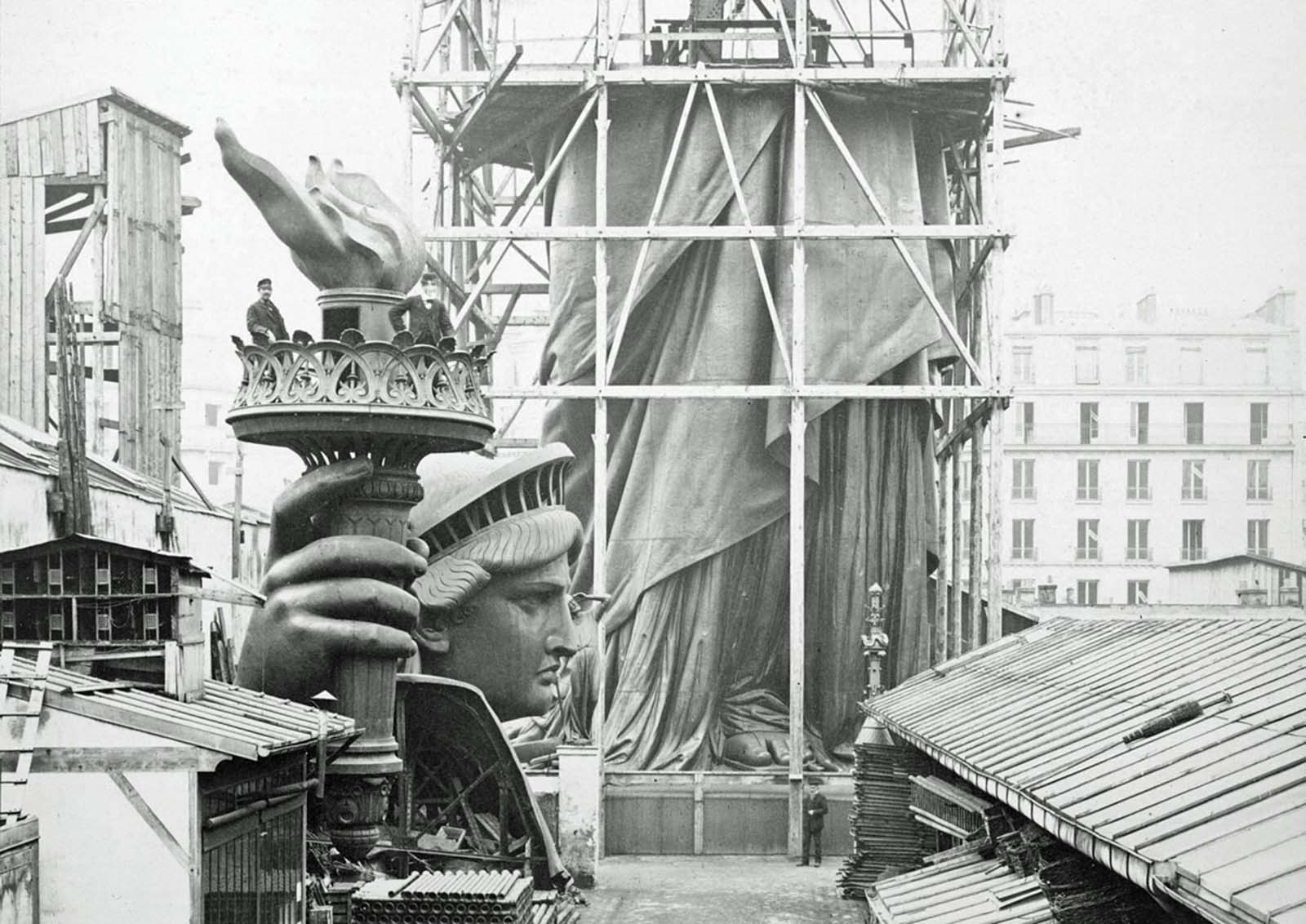 The assemblage of the Statue of Liberty in Paris, showing the bottom half of the statue under scaffolding, with the head and torch at its feet, photographed in 1883.

The right arm and torch of the Statue of Liberty on display at the Centennial Exposition in Philadelphia.

A diagram of the statue’s dimensions.

The Statue of Liberty’s head on display at the Paris World’s Fair.

The fully assembled statue towers over its workshop and the surrounding buildings.

The statue is formally unveiled to the United States ambassador to France before being shipped to New York. 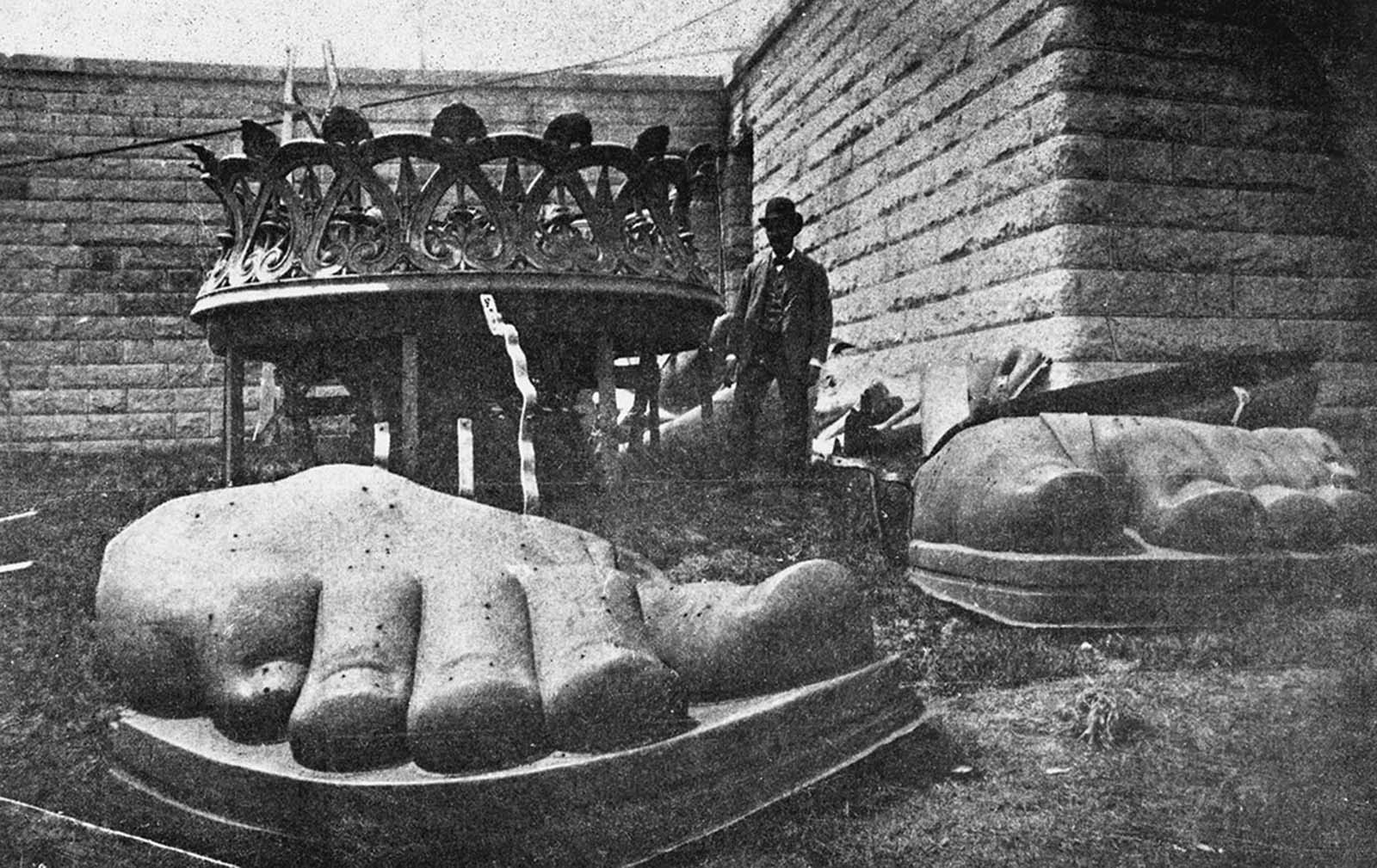 Original caption: “New York, NY – Statue of Liberty toes and base of torch on the ground, preparatory to being hoisted into position onto the pedestal on Bedloe’s Island.” Photographed circa 1885. 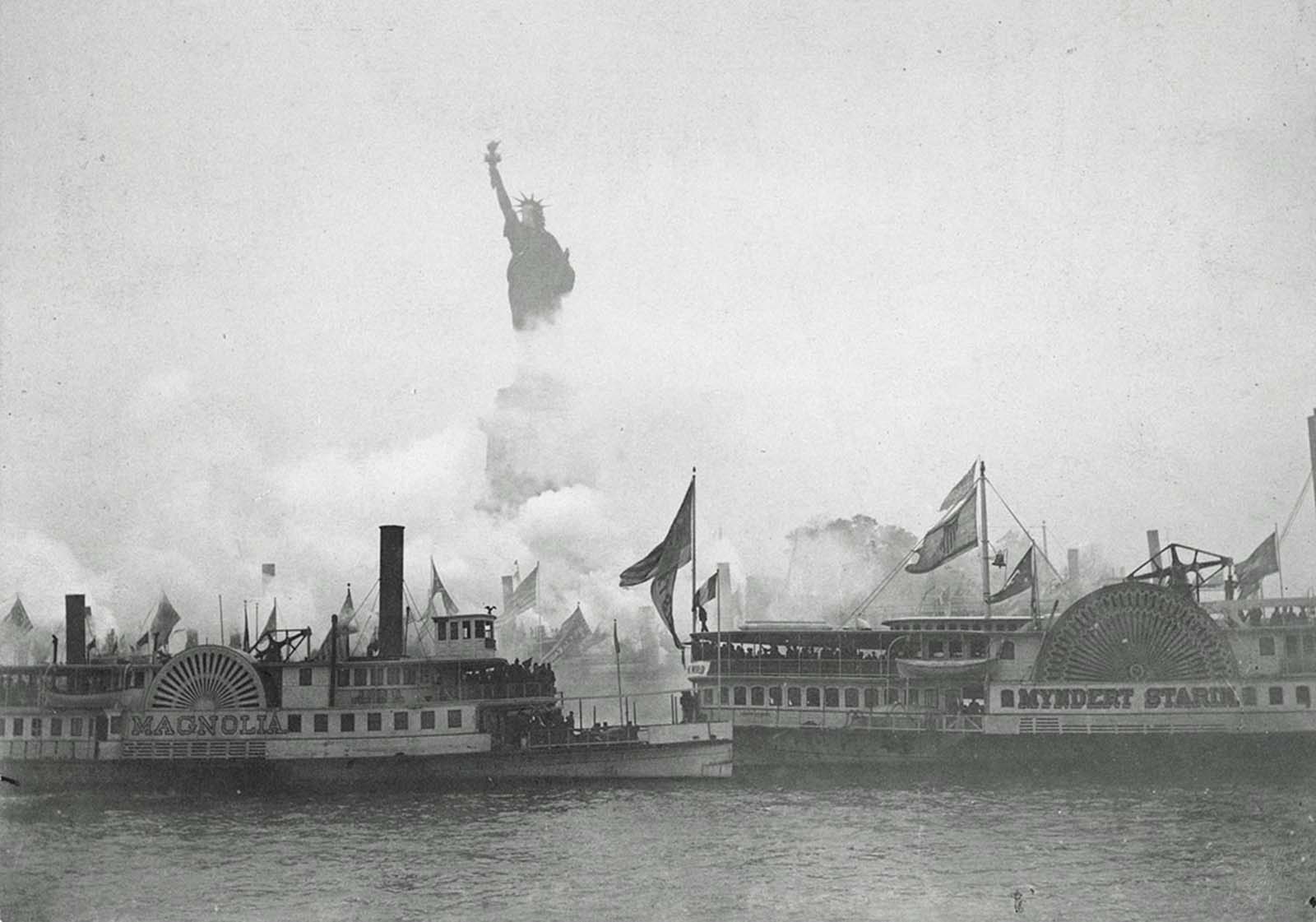 The inauguration of the Statue of Liberty, Liberty Enlightening the World, in New York Harbor, on October 28, 1886. A military and naval salute marked the event, presided over by U.S. President Grover Cleveland. 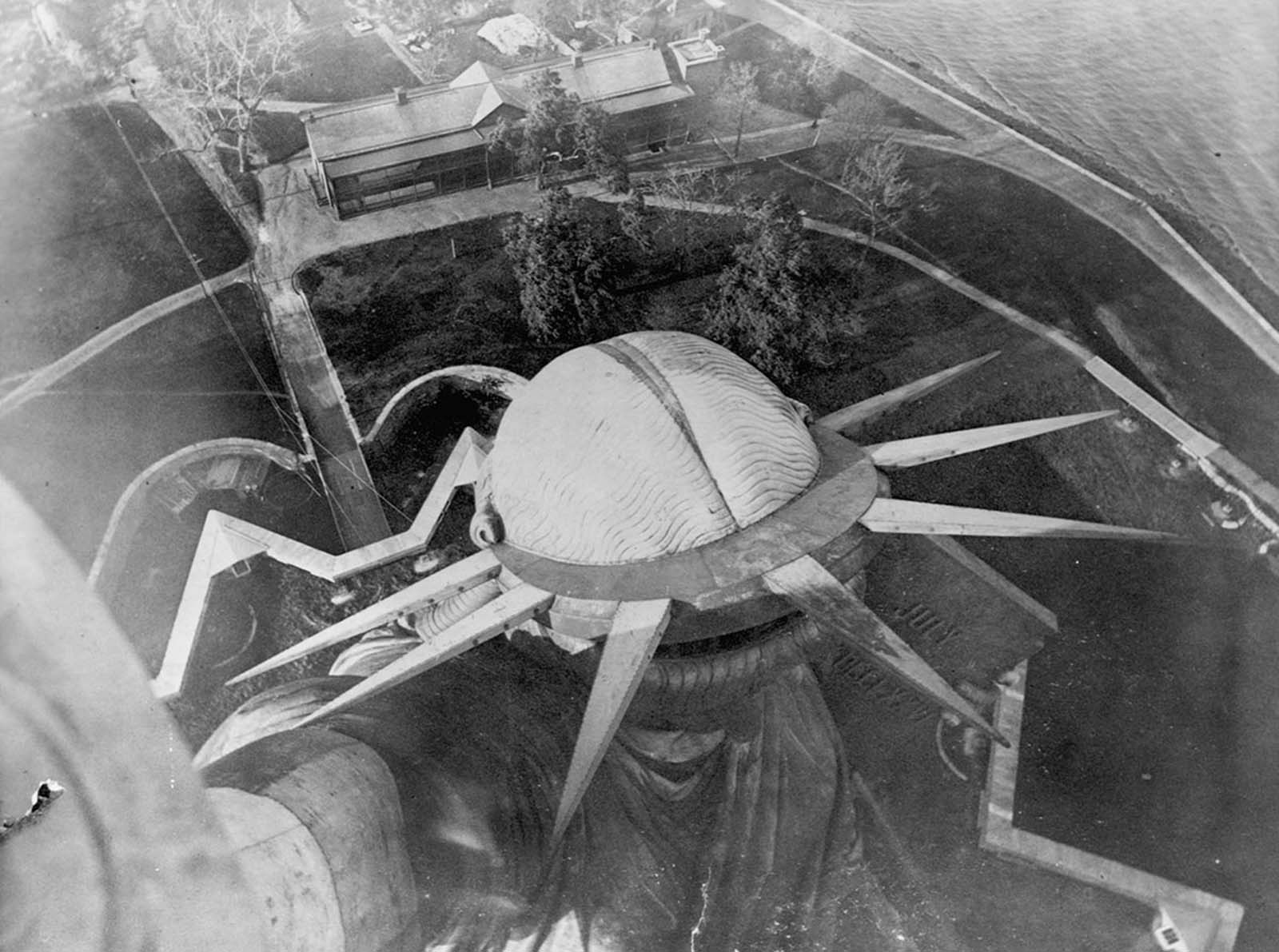 Looking down at the statue from its torch, circa 1890. 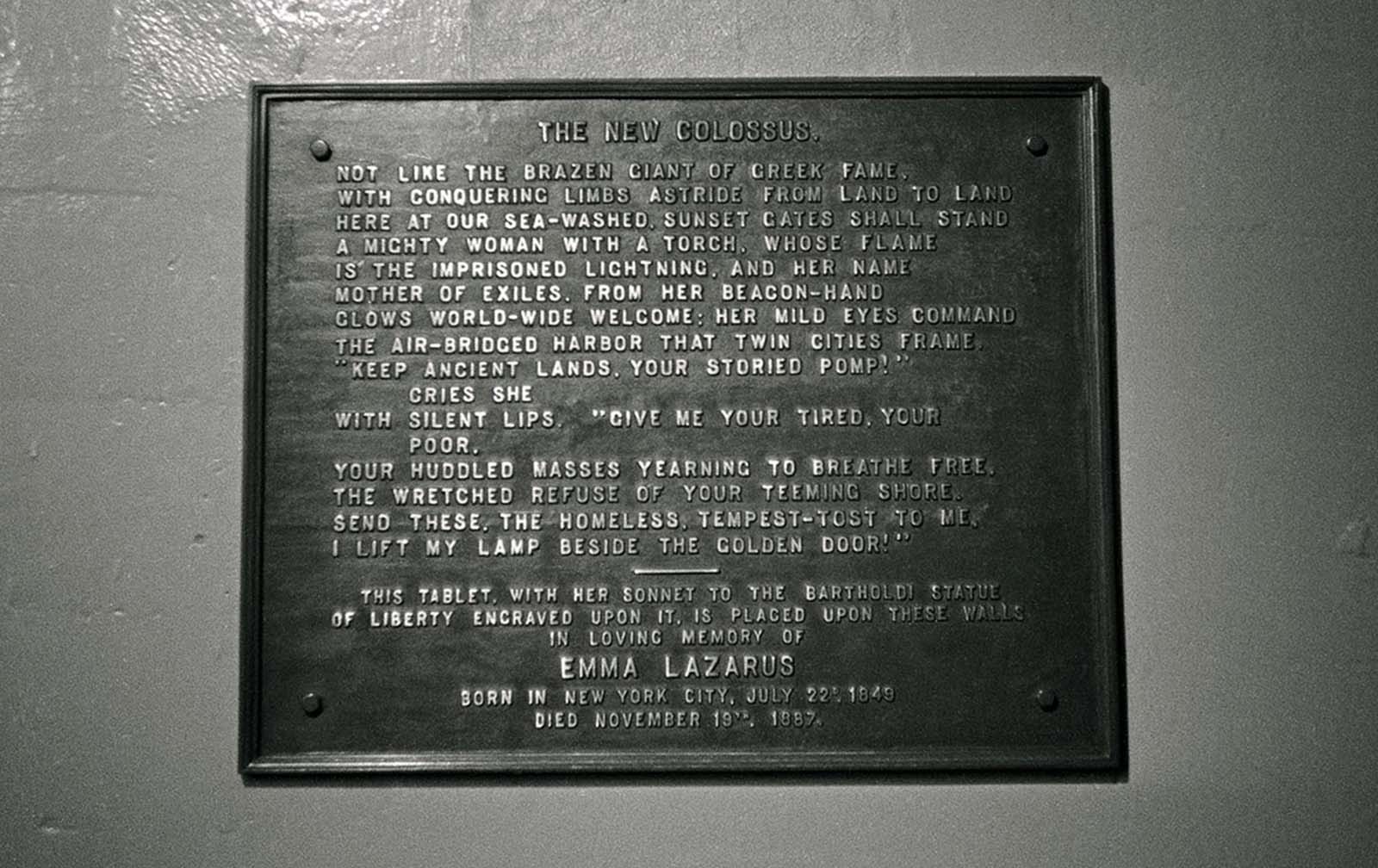 The text of the poem entitled “The New Colossus,” by Emma Lazarus, mounted on the base of the Statue of Liberty. The sonnet was written in 1883, and donated to help raise money for the statue’s pedestal. The text was later cast in bronze and and mounted in 1903. 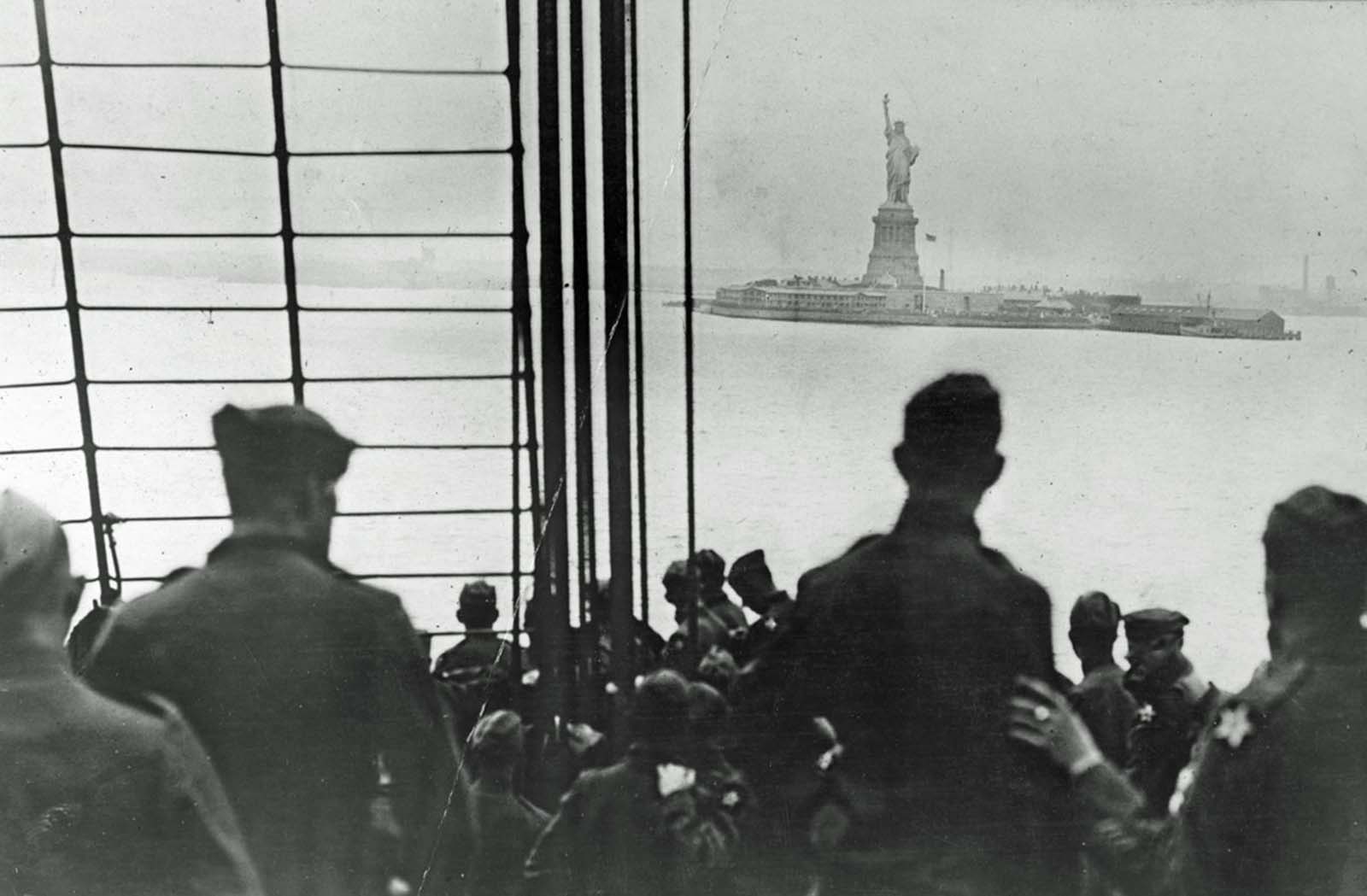 The Statue of Liberty greets the Second Division as it arrives in New York City on August 8, 1919. 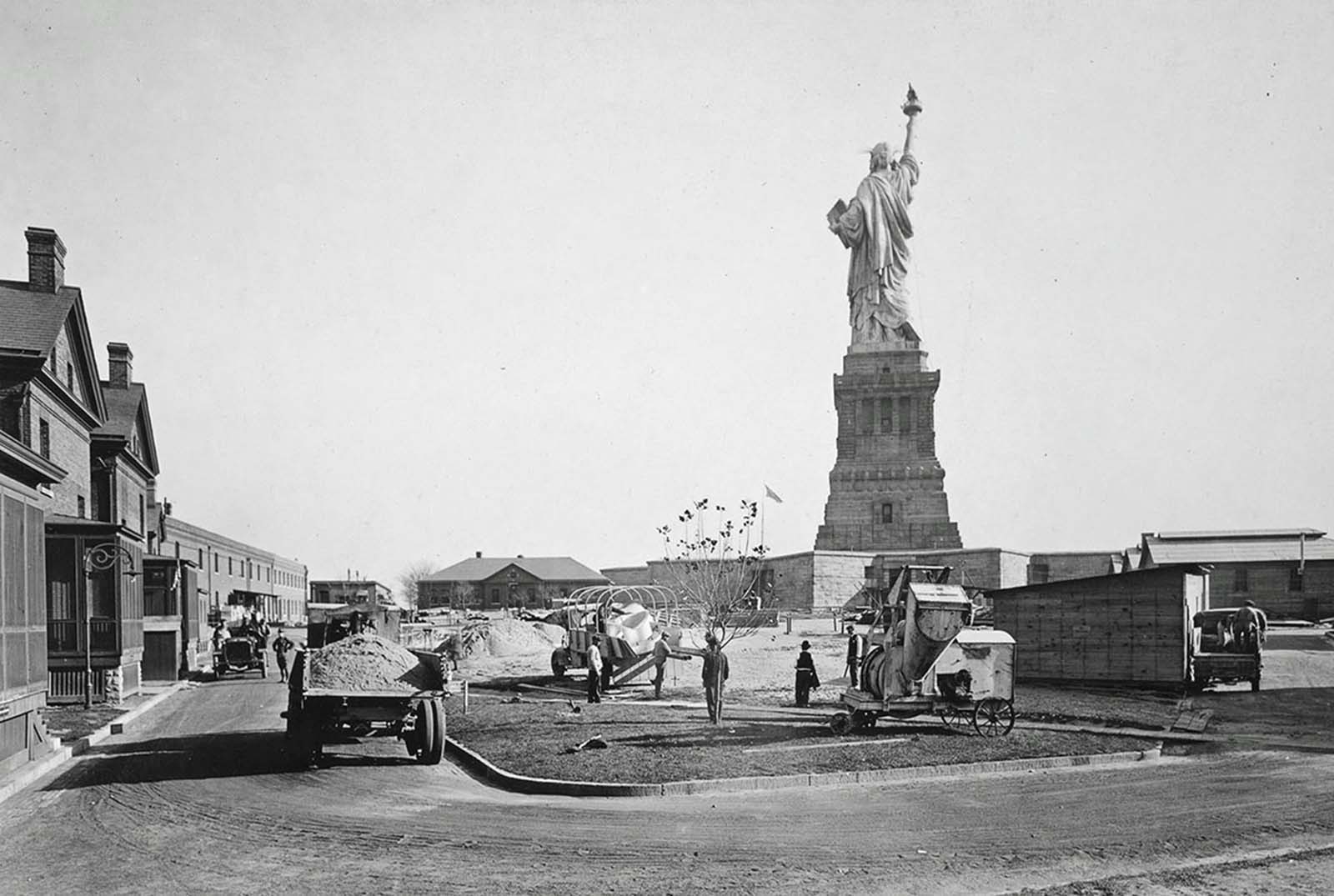 The island that the statue now stands on was previously occupied by Fort Wood, a U.S. military fortification. By the late 1880s, the fort was becoming obsolete, and part of the land was given over to the statue. Here, a view of the Statue of Liberty, standing above workers in Fort Wood, circa 1918. 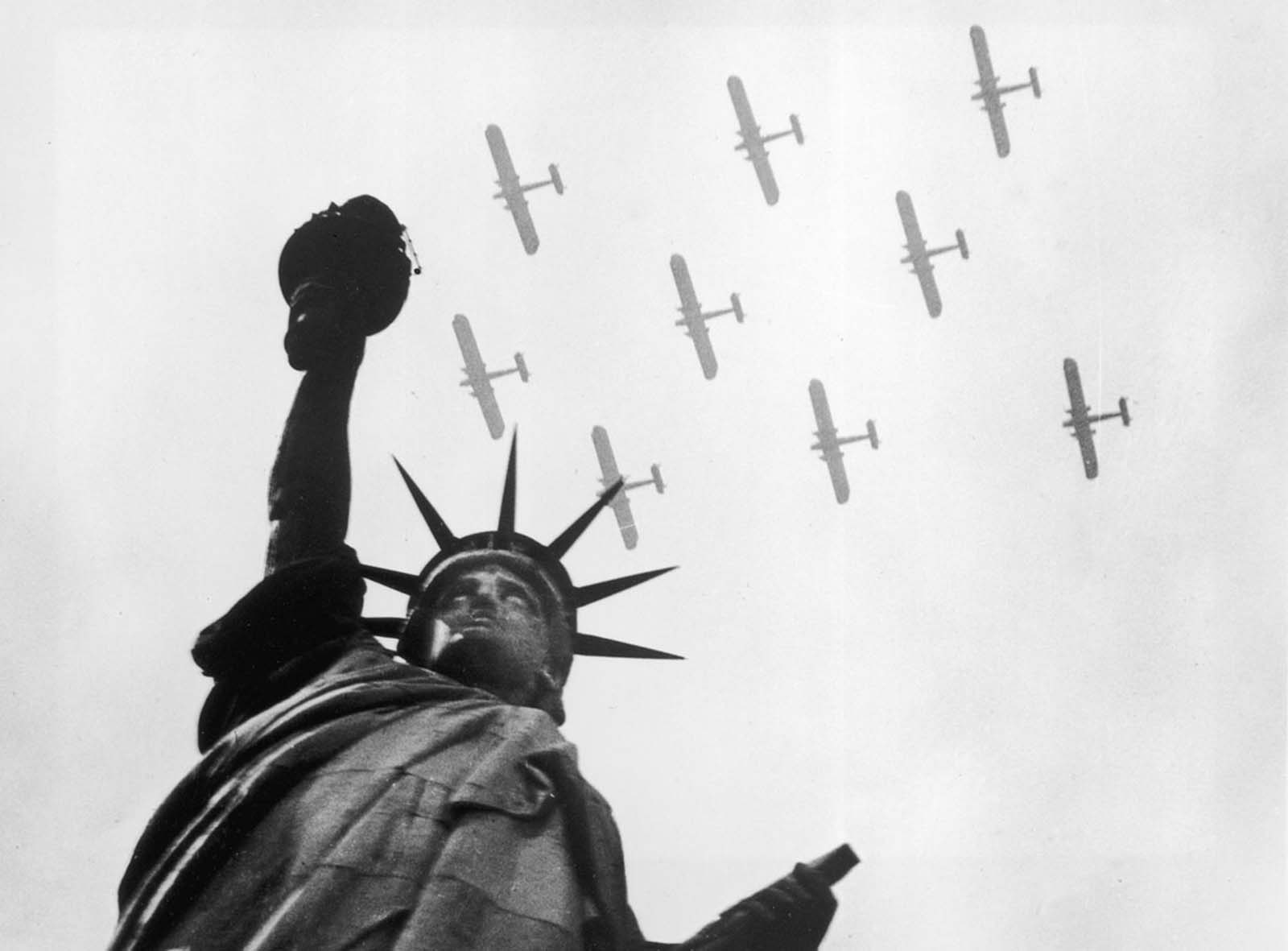 Military aircraft fly over the Statue of Liberty, circa 1935. 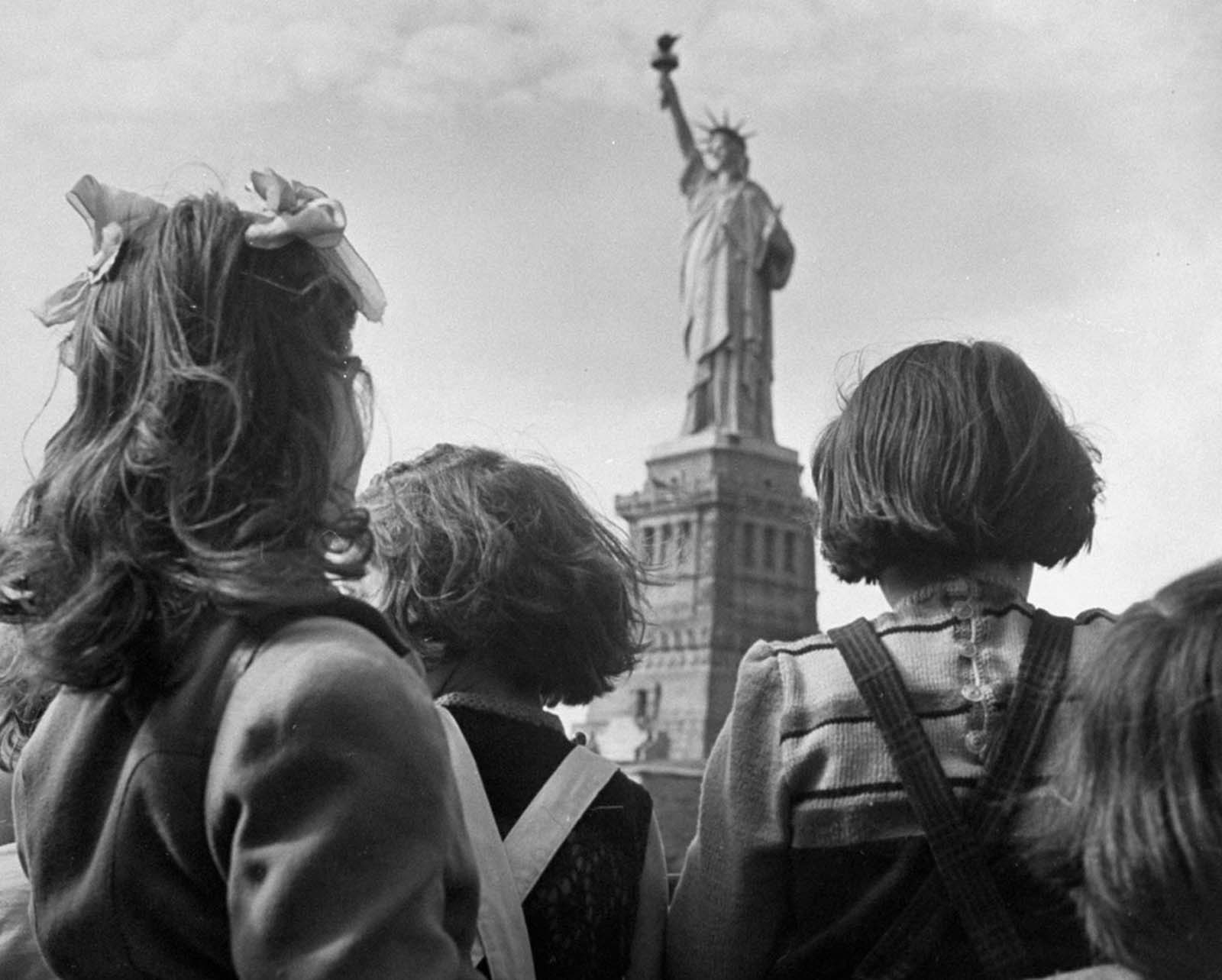 In 1946, refugee children gaze at the Statue of Liberty from the railing of a boat. 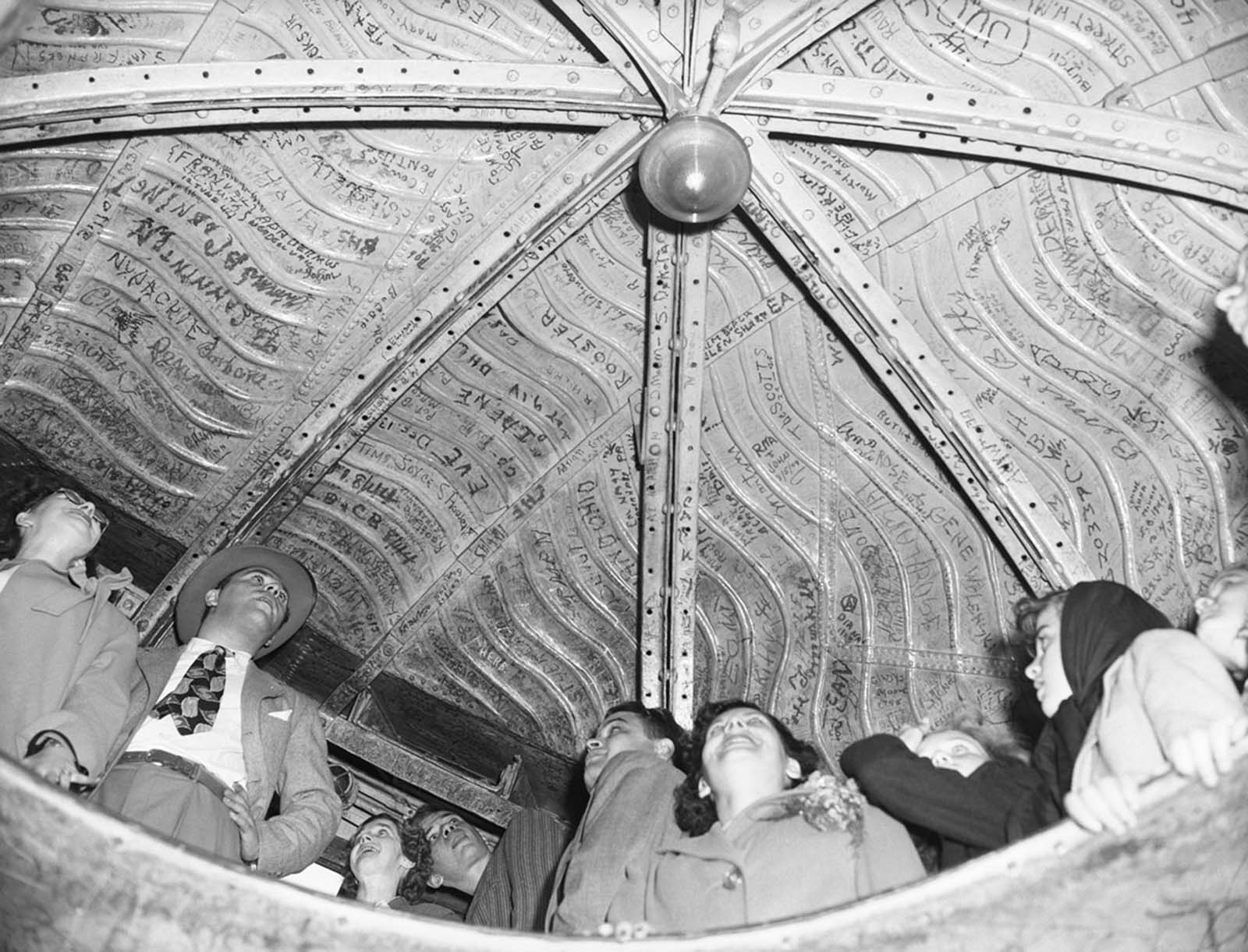 Original caption: “June 20, 1946 – New York: An unidentified visitor to the Statue of Liberty notes on an interior girder his name and his wife’s name. Many visitors to Bedloe’s island on which ‘Miss Liberty’ is located use lipstick to mark their names or initials.” 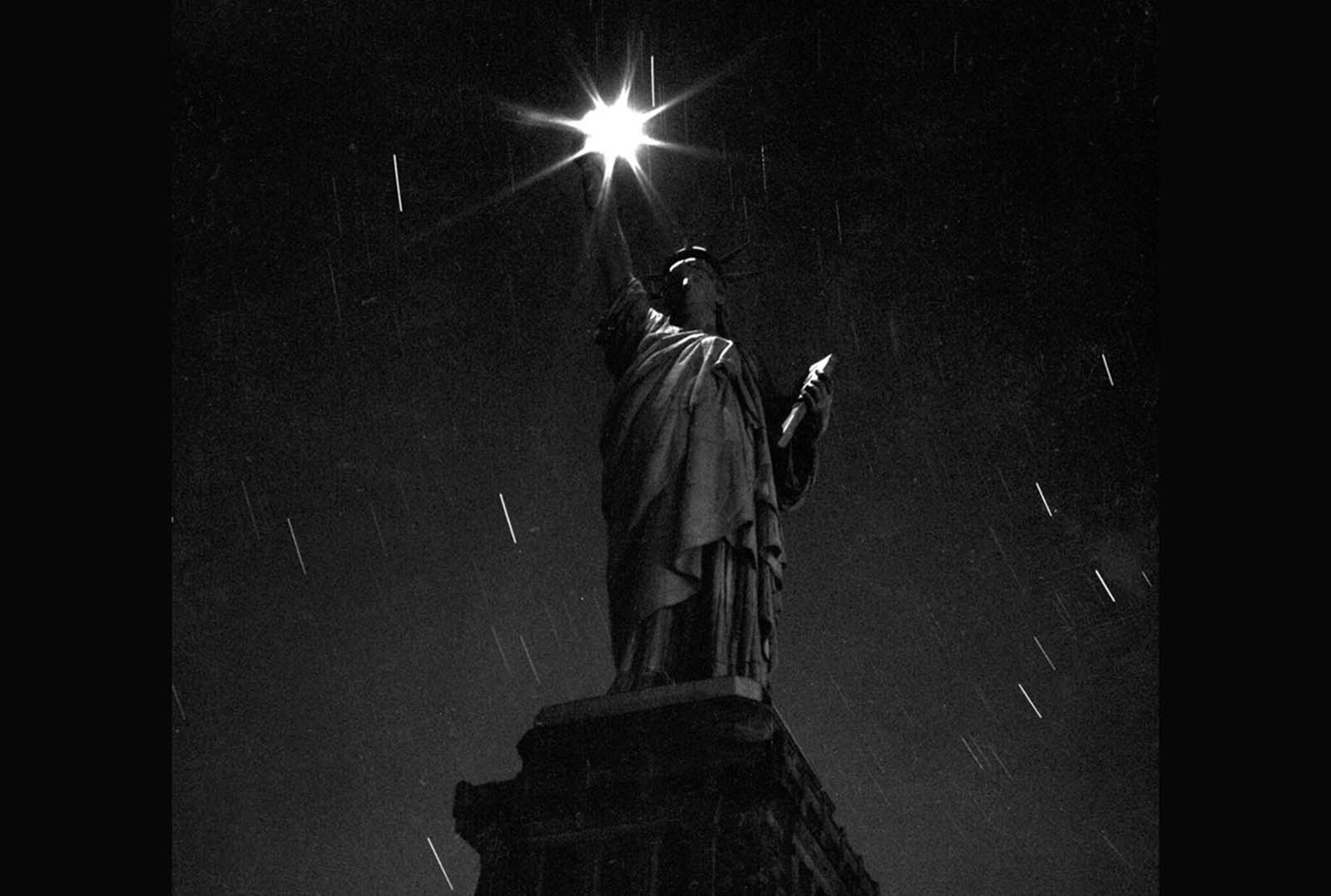 A view of the statue taken at night, during a blackout designed to help conserve energy during World War II, in March of 1942. 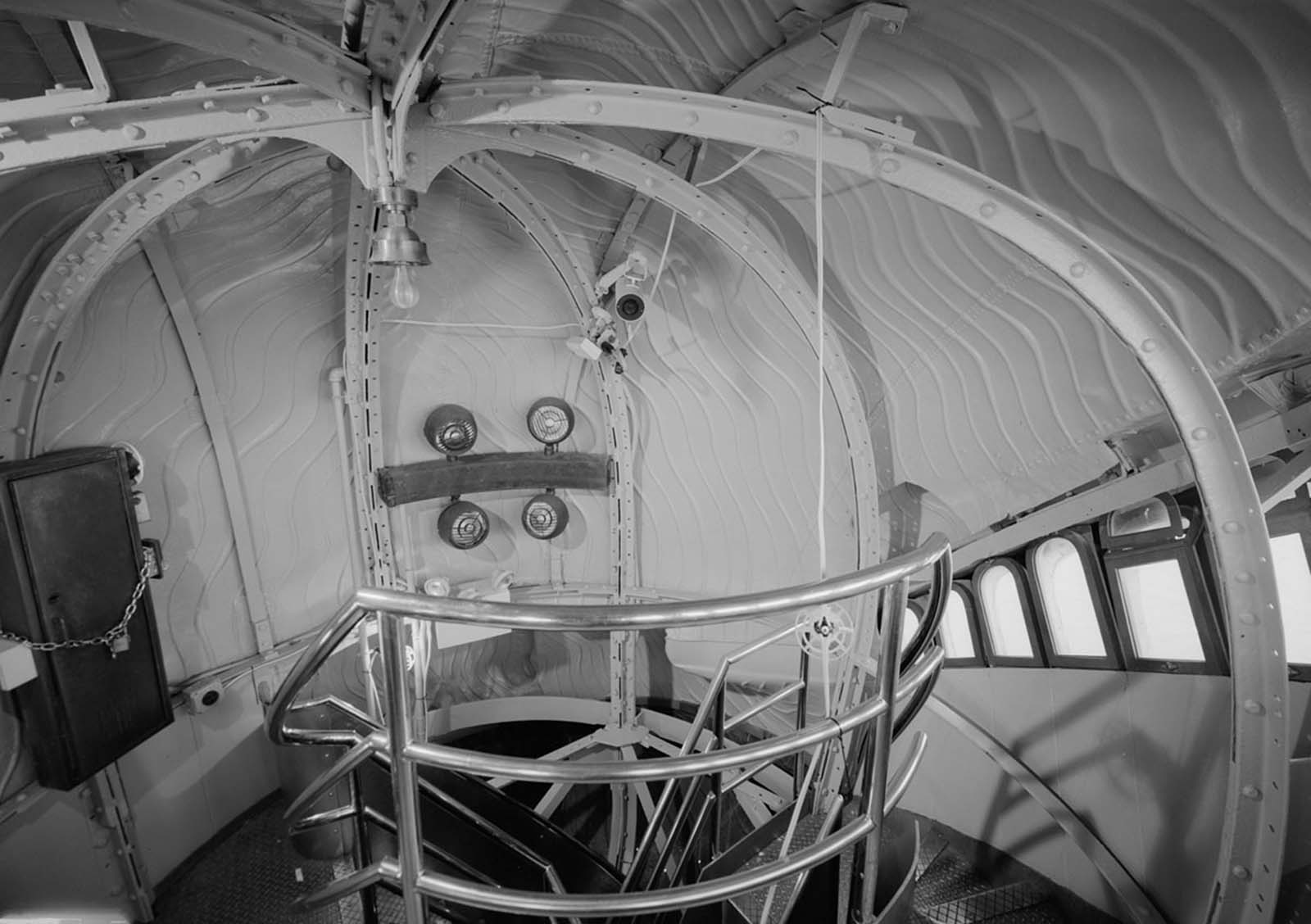 The Interior of the head and crown, looking northwest. 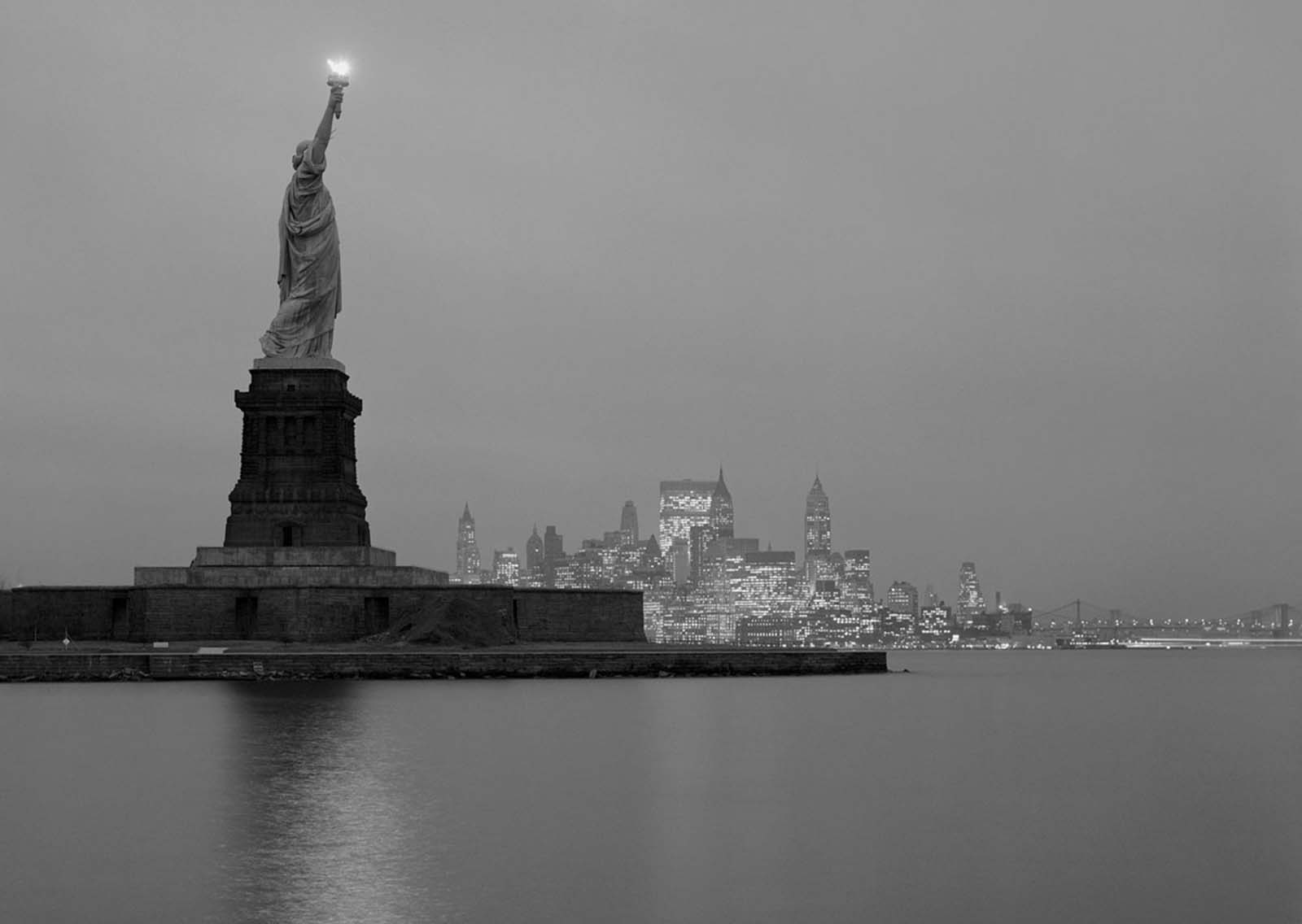 A view of the Statue of Liberty and Manhattan in the evening, photographed in 1961. 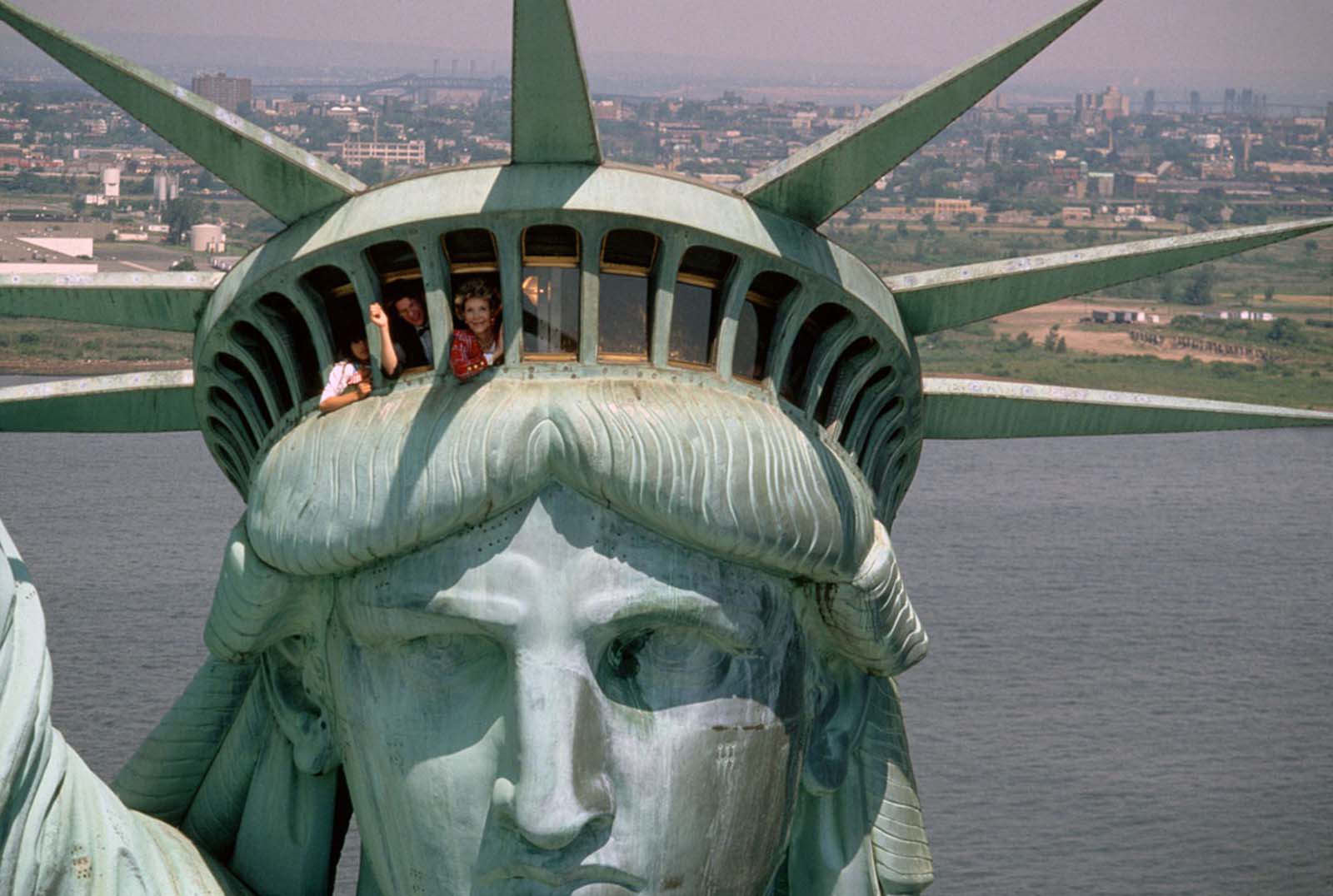 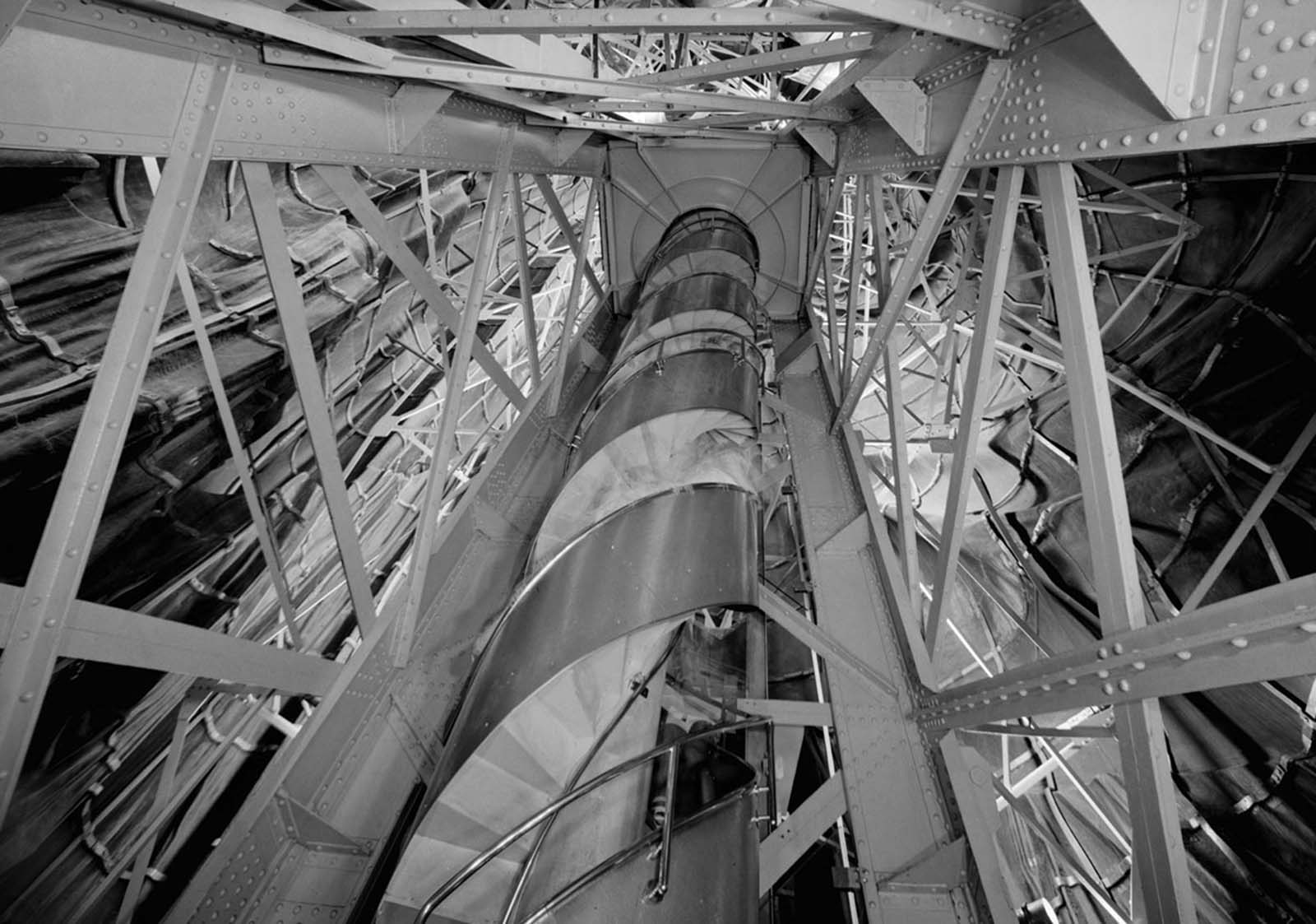 A view looking up a spiral staircase in the statue’s interior. 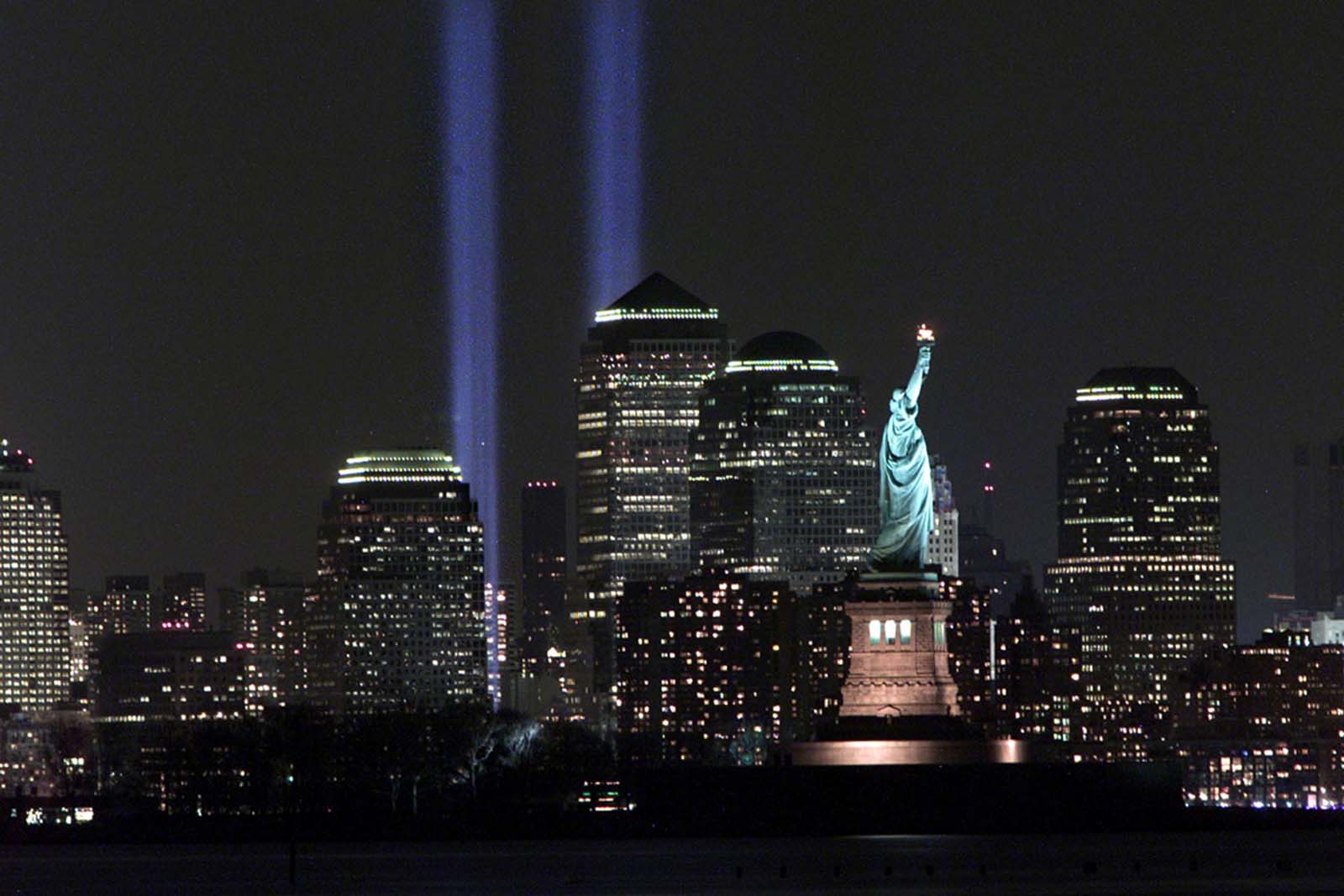 The “Tribute in Light” memorial shines behind the Statue of Liberty on March 11, 2002. 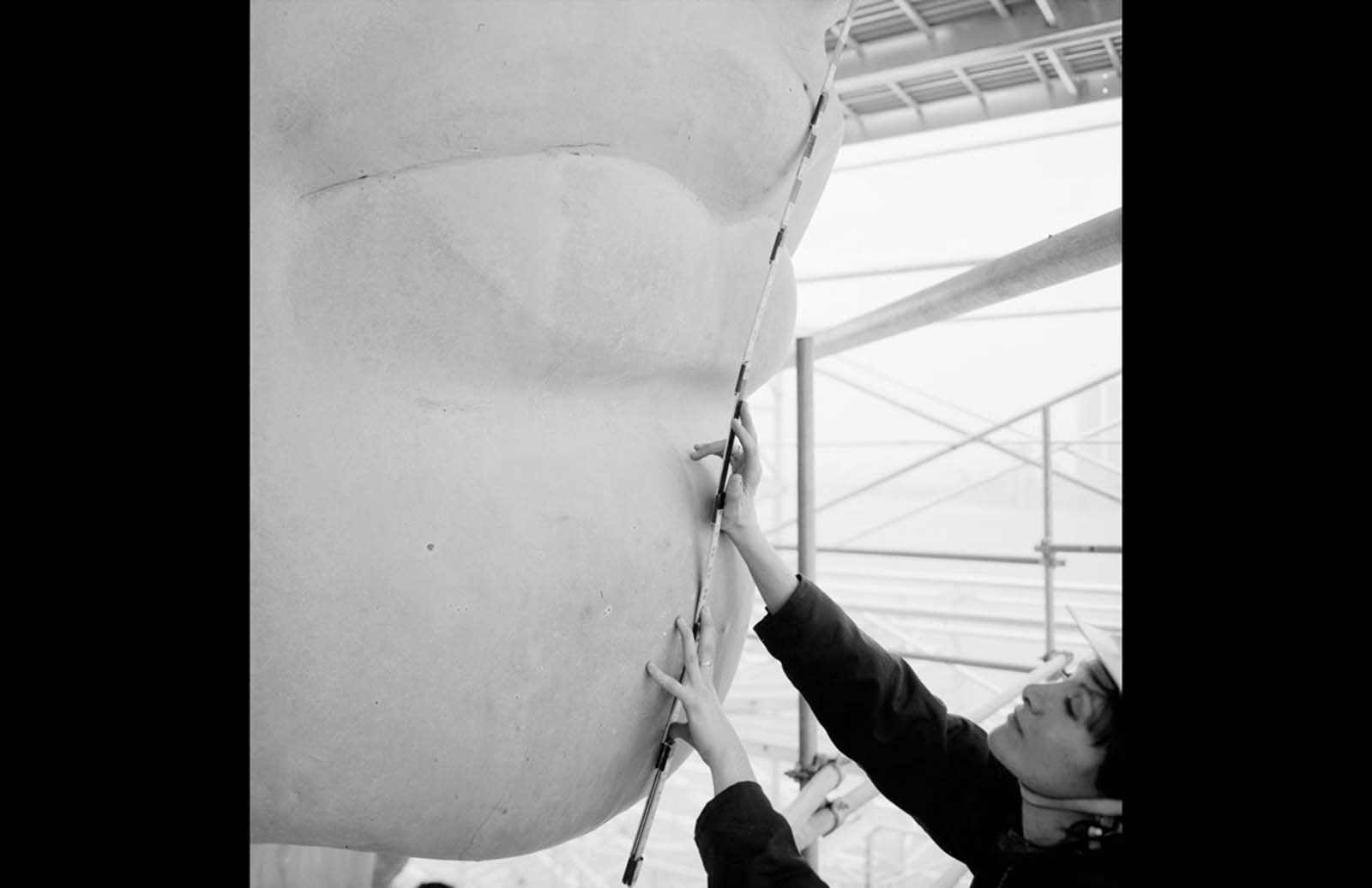 A nose and mouth detail with a worker named Isabel Hill holding a scale stick, during restoration work in March 1985. 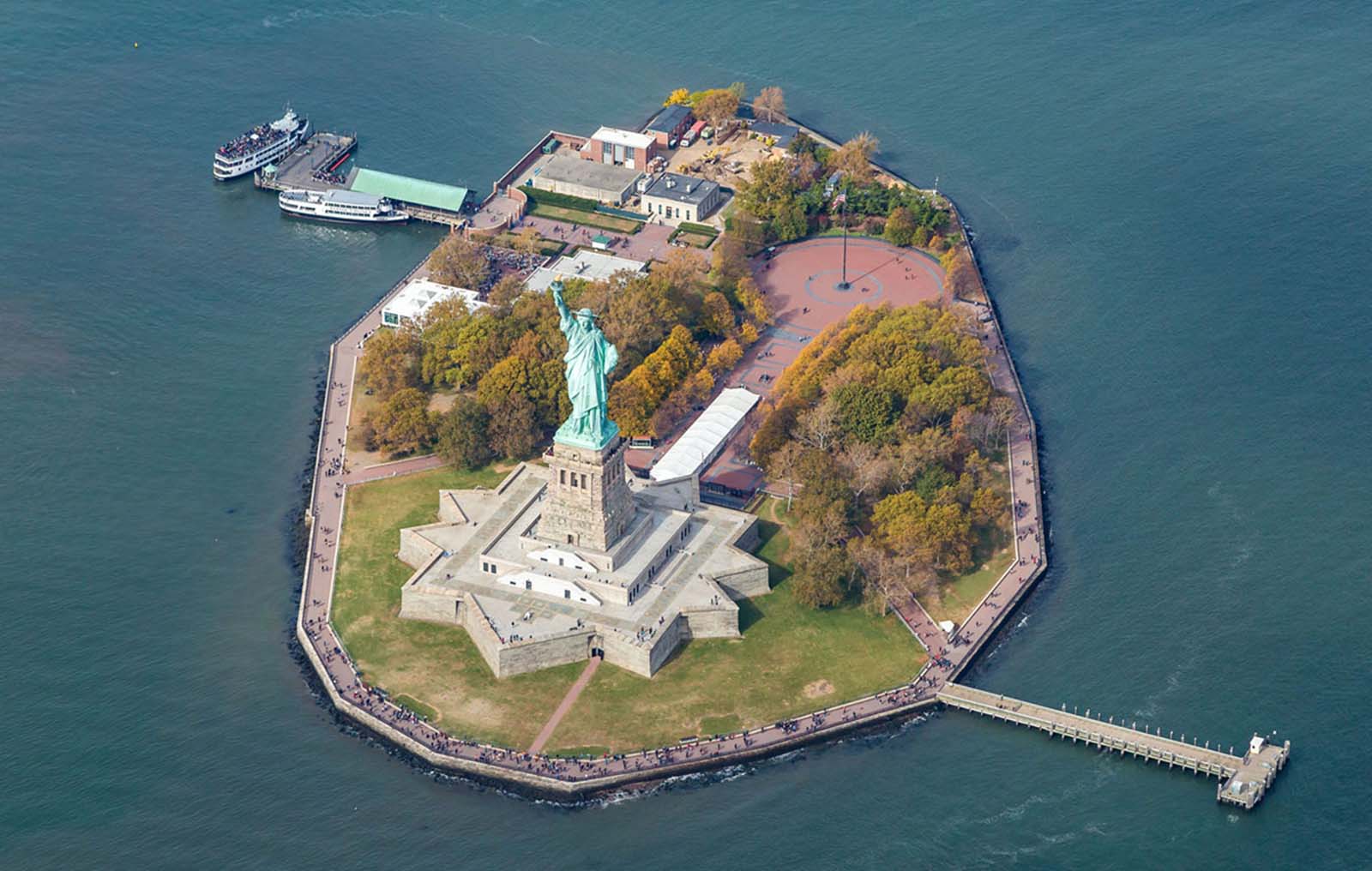 An aerial view of the statue and Liberty Island, taken in October 2015.