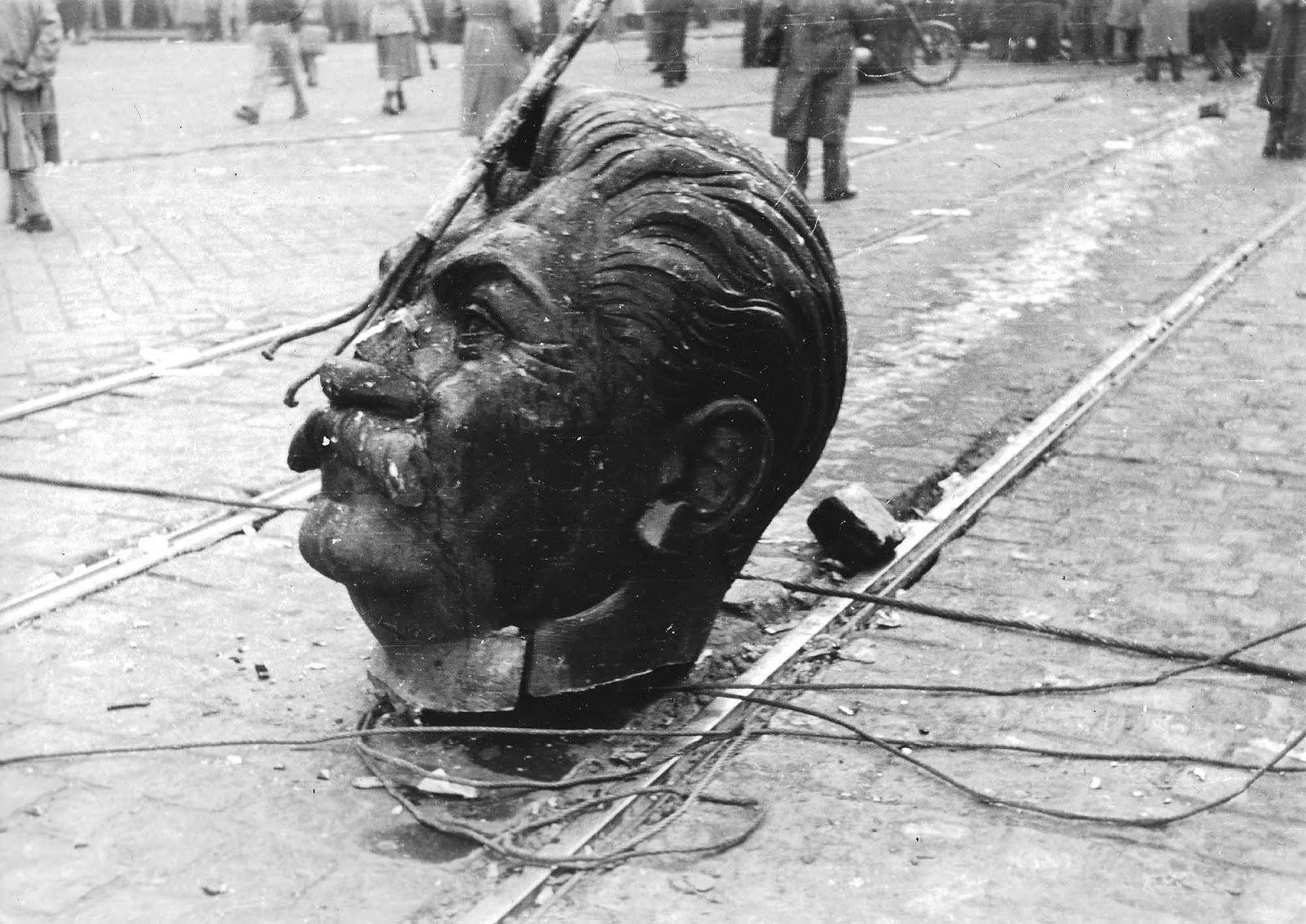 Stalin’s monument was torn down on October 23, 1956, by enraged anti-Soviet crowds during Hungary’s October Revolution.

Built as the birthday present to Stalin on his seventieth birthday (December 21st, 1949), the Stalin Monument in Budapest has become the iconic scene of the Hungarian Uprising in 1956.

The monument was erected on the edge of Városliget, the city park of Budapest. The large monument stood 25 meters tall in total. The bronze statue stood eight meters high on a four meters high limestone base on top of a tribune eighteen meters wide.

Stalin was portrayed as a speaker, standing tall and rigid with his right hand at his chest. The sides of the tribune were decorated with relief sculptures depicting the Hungarian people welcoming their leader. The monument not only demonstrated Stalin’s power, but the power of the Hungarian Working People’s Party as well. 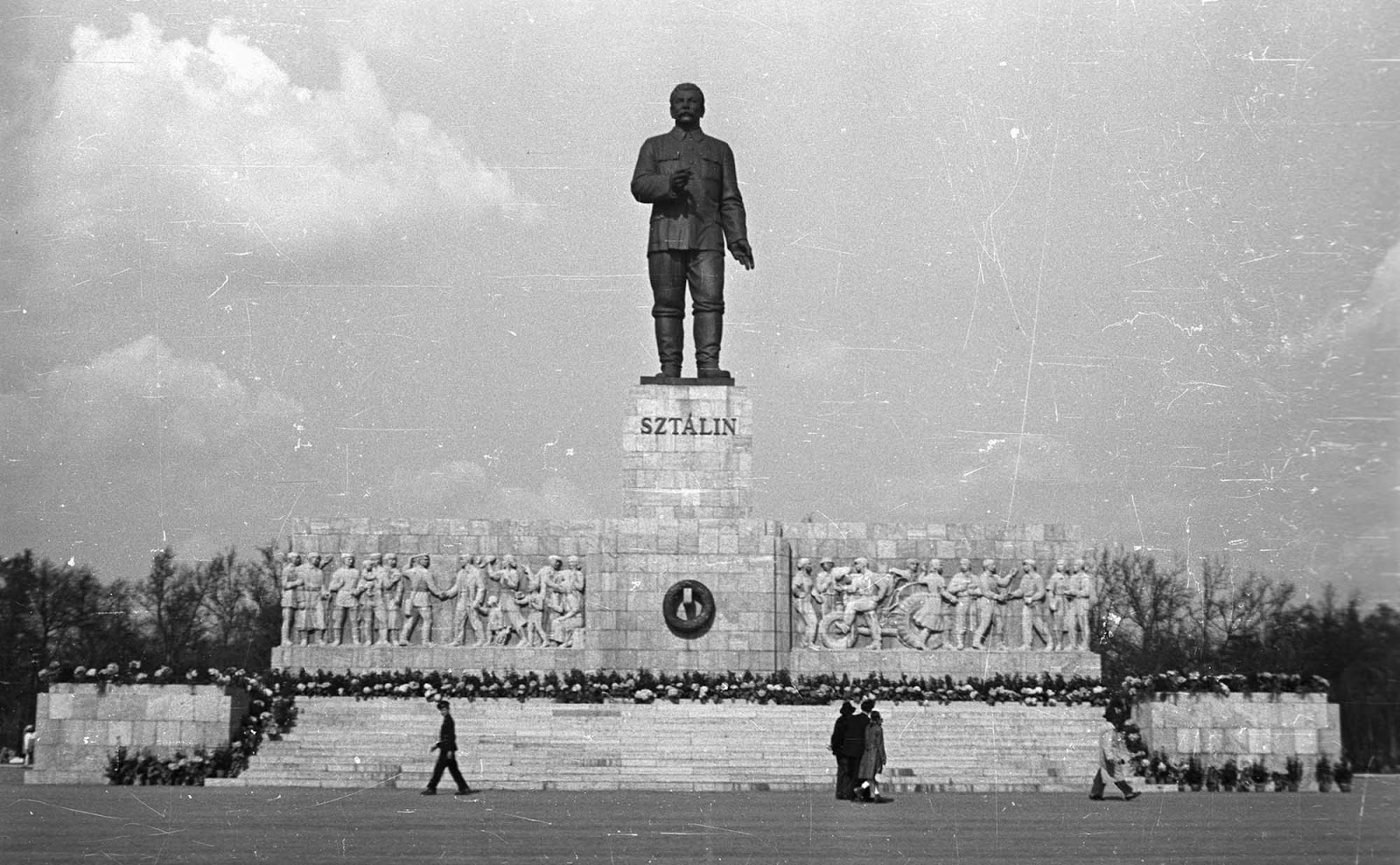 The large monument stood 25 metres tall in total. The monument not only demonstrated Stalin’s power, but the power of the Hungarian Working People’s Party as well.

On October 23, 1956, around two hundred thousand Hungarians gathered in Budapest to demonstrate in sympathy for the Poles who had just gained political reform during the Polish October. The Hungarians broadcast sixteen demands over the radio, one of them being the dismantling of Stalin’s statue.

A hundred thousand Hungarian revolutionaries demolished the Stalin statue, leaving only his boots, in which they planted a Hungarian flag.

The bronze inscribed name of the Hungarians’ leader, teacher and “best friend” was ripped off from the pedestal. Before the toppling of the statue, someone had placed a sign over Stalin’s mouth that read “Russians, when you run away don’t leave me behind!”. The revolutionaries chanted “Russia go home!” while pulling down the statue. “W.C.” and other insulting remarks were scrawled over the fragmented parts of the statue.

There is a contemporary report about how it came down (translated it from Hungarian):

“Finally we managed to secure the place and start the trucks. Then the wires started pulling the hated abomination of a symbol by the neck. All together, again and again, pull, watch out! – and the statue would not budge.

The wires snapped one by one and we were fighting with our tears while feeling anger and impotence. But we said: man placed it there, man must be able to remove it. We had to think of something.

One of the engineering students (such as myself) says his school is relatively nearby, they have gas cutting devices there. Five boys fetch the cutters, the people cheer as we work on it; instead of shrinking, the crowd grows bigger. We get a lot of help, many of us are proficient with the instruments as we were engineering students and welders by trade.

With all this know-how we cut the statue below the knee within minutes; the biggest issue was pushing back the crowd as everybody was eager to help. Then and there weren’t bosses and workers, apprentices and teachers. Everybody was equal there and everybody wanted to help.

It finally happened, we managed to get the crowd back; and then the trucks could pull down the compromised statue, crackling and rustling. It must have been the happiest moment of my life up until that point, witnessing how the enormous, loathed symbol came crashing down to the ground. As it lay there we mounted it and we were overcome with euphoria, as if we had defeated the whole of communism and we embraced each other with joy.” 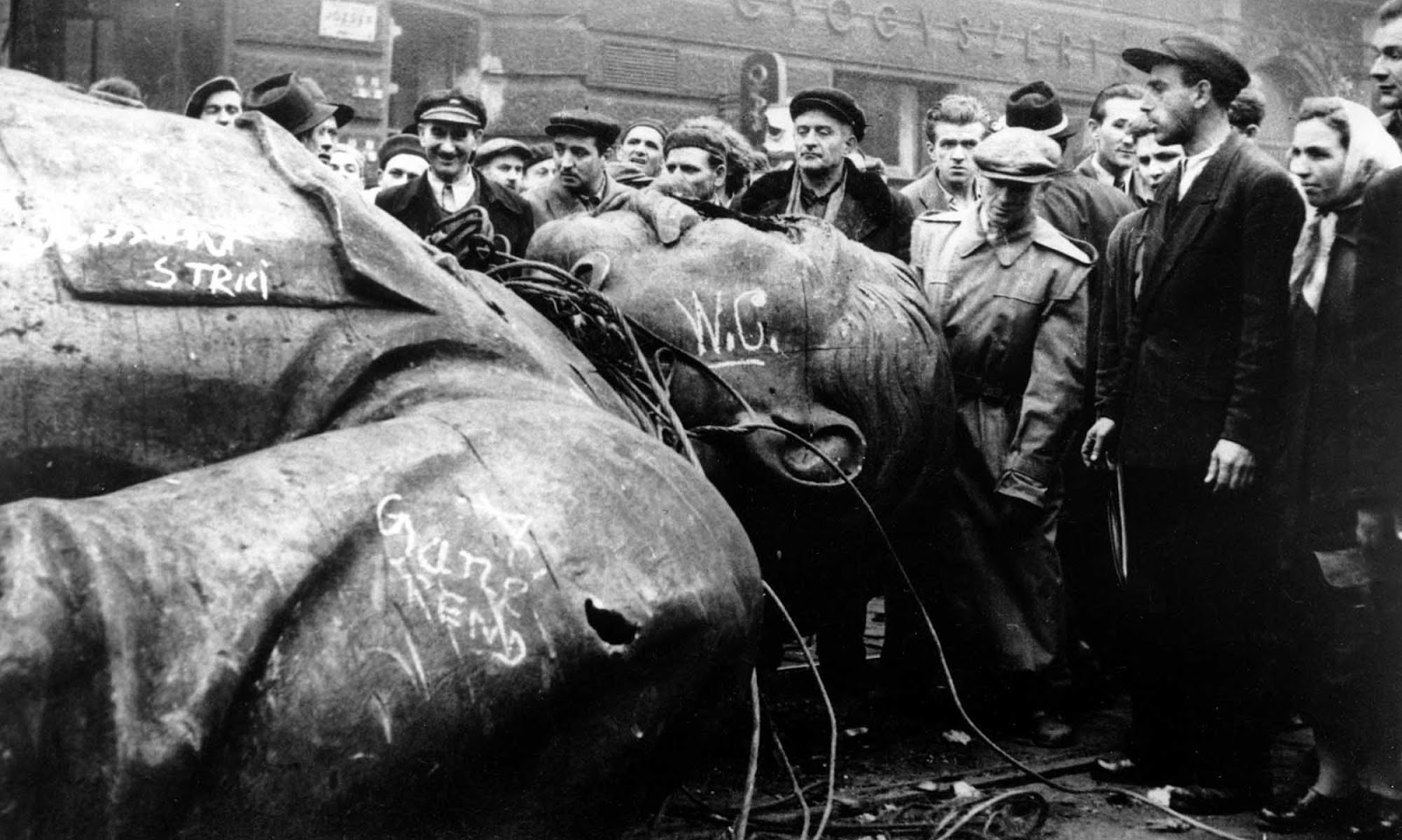 Note the “W.C” inscribed on the monument. 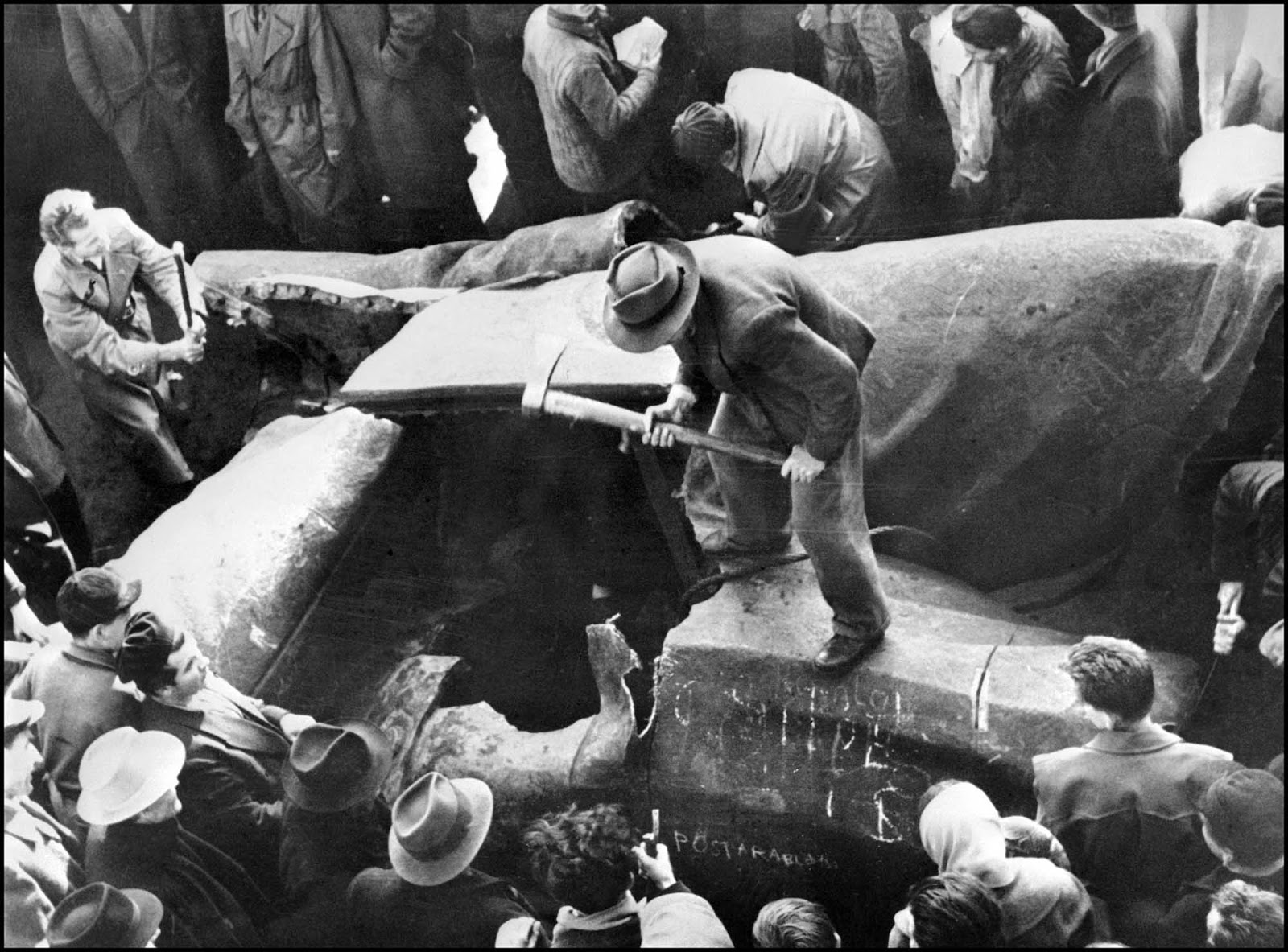 “[The demonstrators] placed […] a thick steel rope around the neck of the 25-metre tall Stalin’s statue while other people, arriving in trucks with oxygen cylinders and metal cutting blowpipes, were setting to work on the statue’s bronze shoes. […] An hour later the statue fell down from its pedestal.” 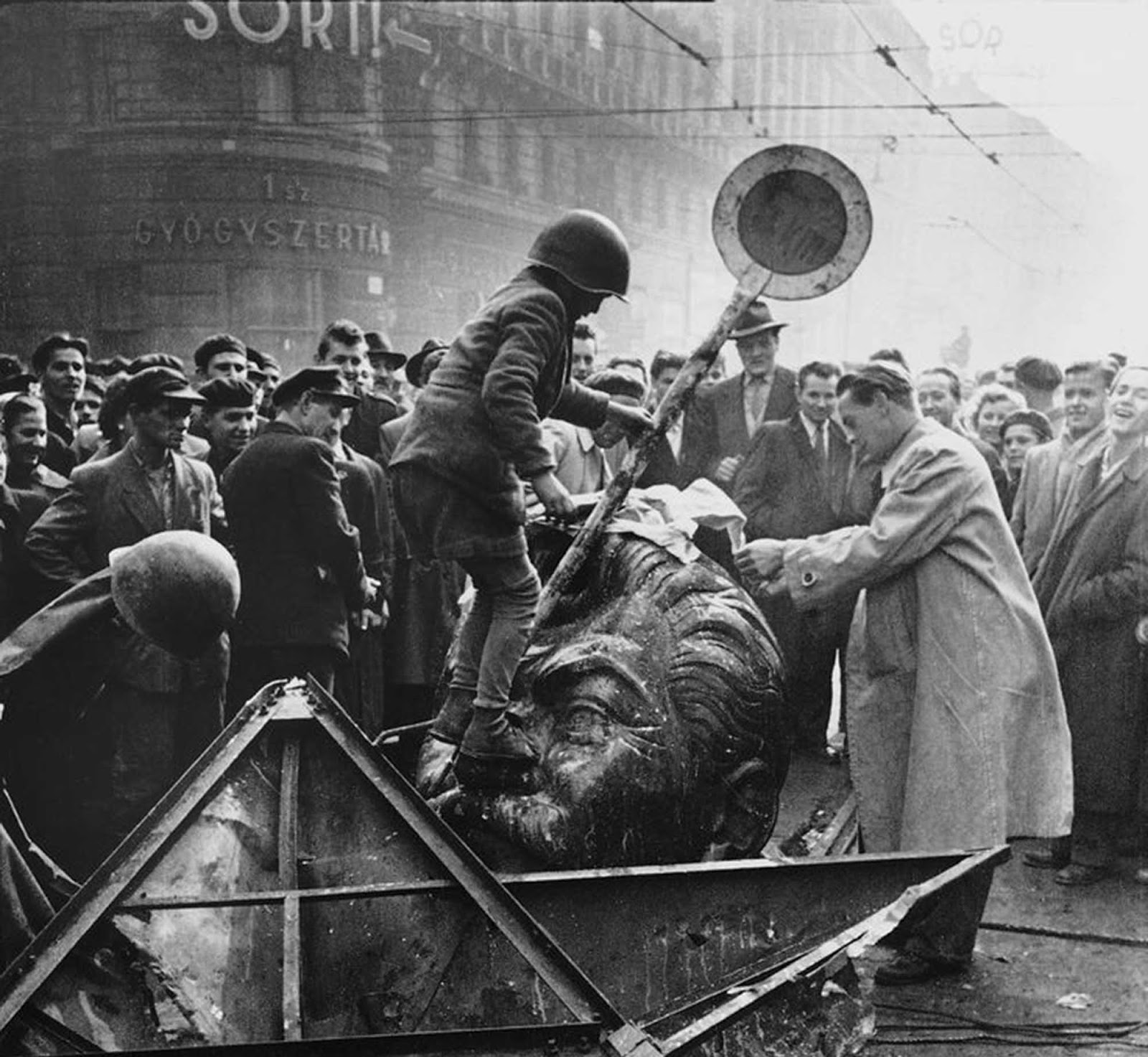 Insulting remarks were scrawled over the fragmented parts of the statue. 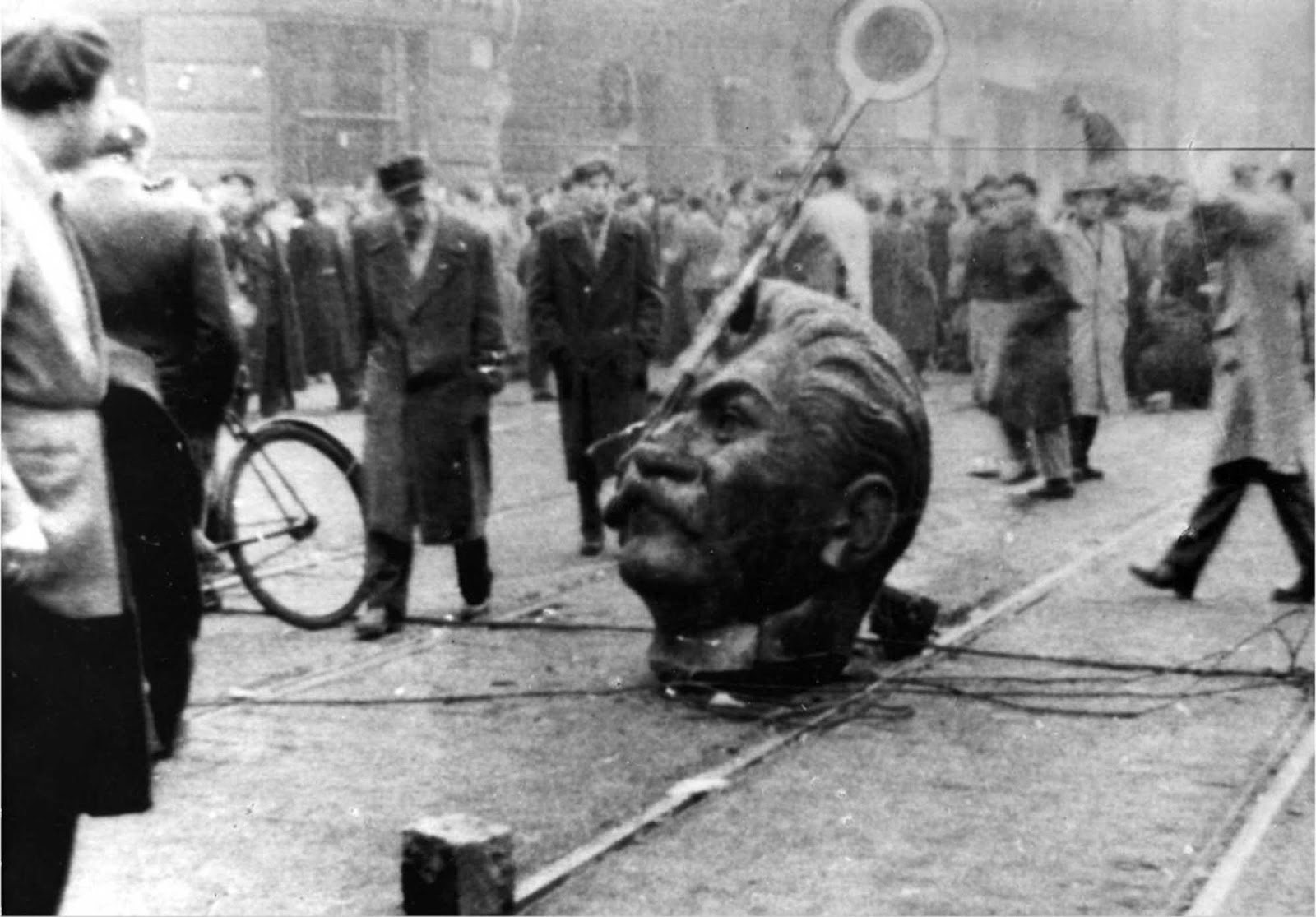 Remains of the statue on Grand Boulevard.

The site of the former Stalin Monument is now occupied by the Monument of the 1956 Revolution, completed in 2006 for the 50th anniversary of the historic event.

A life-sized copy of the tribune was built in Budapest’s Statue Park with the broken bronze shoes on top of the pedestal in 2006. This is not an accurate copy of the original but only an artistic recreation by sculptor Ákos Eleőd.