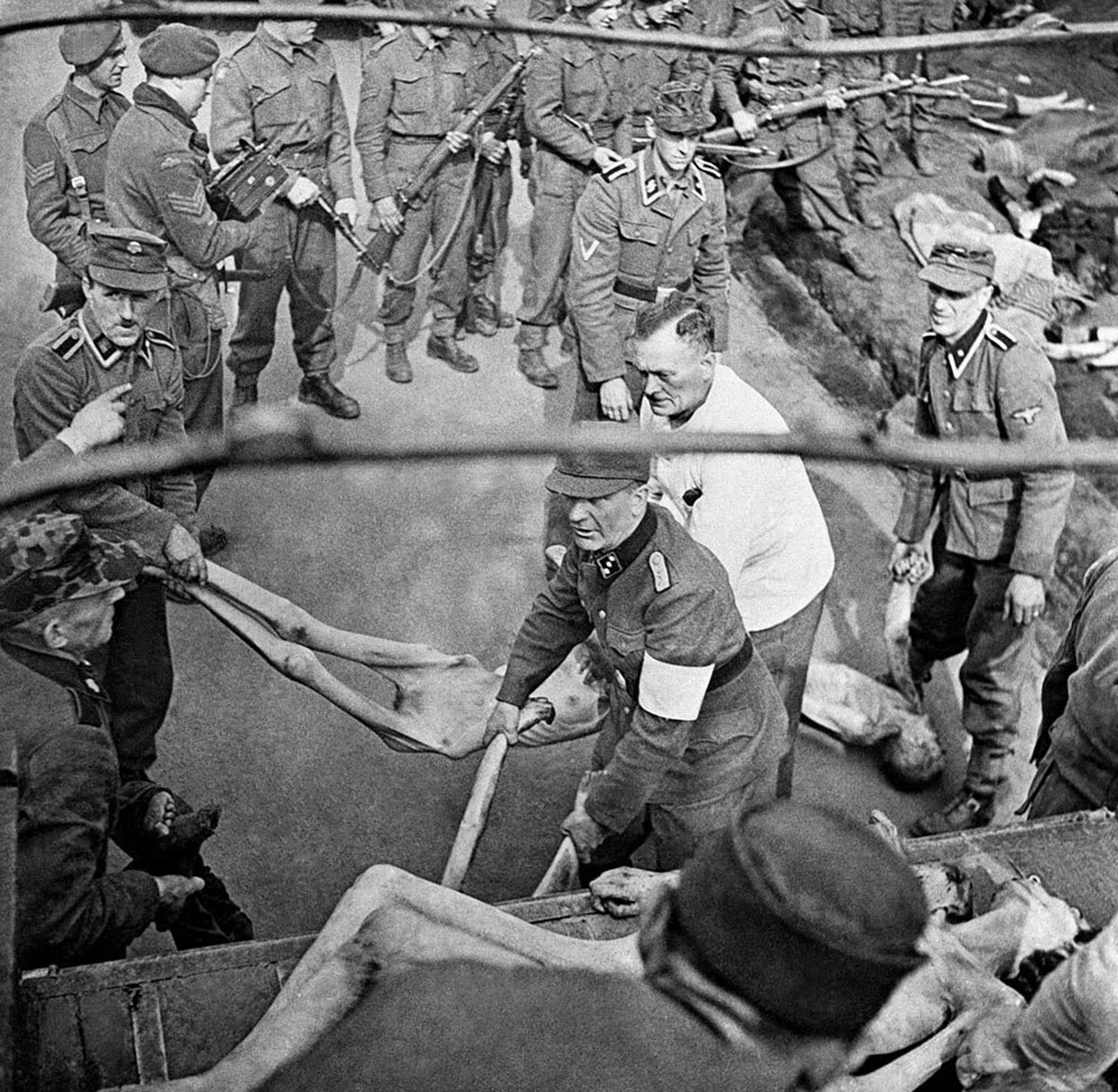 After the liberation of the Bergen-Belsen concentration camp, the dead bodies were buried in mass graves. The SS prison guards were forced by British soldiers to load the bodies into the trucks. Note British troops in the background with Sten submachine guns and Lee-Enfield rifles.

The prison guards were part of SS-Totenkopfverbände (SS-TV), an independent unit within the SS with its own ranks and command structure.

The whole of the SS-Totenkopfverbände training was based on elitism, toughness, and comradeship, together with a regime of ruthless discipline. While the Totenkopf (English: Death’s Head) was the universal cap badge of the SS, the SS-TV also wore the insignia on the right collar to distinguish itself from other SS units.

One of the unique aspects of the Holocaust was the blatant orchestration and implementation of rounding up, documenting, and ensuring that every Jew within the conquered Nazi territory was killed.

This policy of finding every single Jew within the vast territory under Nazi control, marking them for death in a callous bureaucratic manner, finding ways to transport them to death camps, or killing them with mobile killing units, gas, etc. was a unique aspect of the Holocaust, in that the killing was so organized and efficient.

Initially, this was an “exchange camp”, where Jewish hostages were held with the intention of exchanging them for German prisoners of war held overseas. Before the advance of the Red Army, the number of prisoners at Belsen was small.

This overcrowding led to a vast increase in deaths from disease: particularly typhus, as well as tuberculosis, typhoid fever, dysentery, and malnutrition in a camp originally designed to hold about 10,000 inmates. All inmates were subject to starvation and epidemics. Some 50,000 people are estimated to have died in this camp.

The camp was liberated on April 15, 1945, by the British 11th Armoured Division. The soldiers discovered approximately 60,000 prisoners inside, most of them half-starved and seriously ill, and another 13,000 corpses lying around the camp unburied.

The average weight of prisoners was 25-30 kg (50-60 pounds). The prisoners had been without food or water for days before the Allied arrival partially due to the allied bombing. In the period immediately preceding and following liberation, prisoners were dying at a rate of around 500 per day mostly from typhus.

There were no gas chambers at Bergen-Belsen since the mass killings took place in the camps further east. Nevertheless, an estimated 50,000 Jews, Czechs, Poles, anti-Nazi Christians, homosexuals, and Gypsies died in the camp.

Anne Frank lost her life in this camp. After liberation, the camp was burned in an effort to prevent the further spread of disease, and Anne Frank was buried in a mass grave at an unknown location.