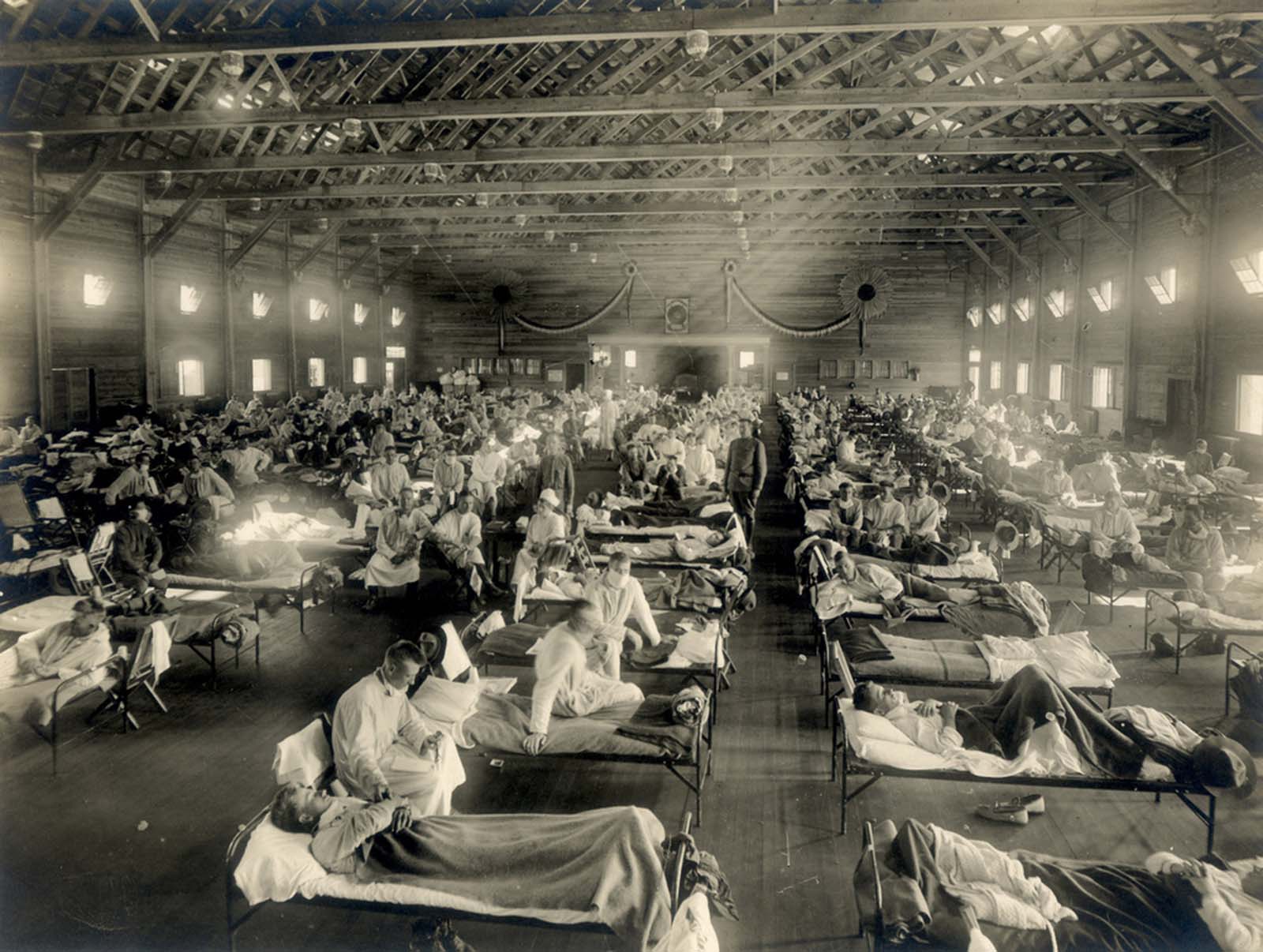 The first official cases of the 1918 Spanish flu pandemic were recorded at the U.S. Army’s Camp Funston, Kansas, where this emergency influenza ward held treated patients.

From January 1918 to December 1920, a deadly influenza outbreak infected 500 million people across the world. Estimates suggest between 50 and 100 million people died from the virus, in other words, up to 5% of the planet’s population. It killed more people than any other illness in recorded history, more even than the total number of deaths in WWI.

The Spanish flu strain killed its victims with a swiftness never seen before. In the United States stories abounded of people waking up sick and dying on their way to work.

The symptoms were gruesome: Sufferers would develop a fever and become short of breath. Lack of oxygen meant their faces appeared tinged with blue.

Hemorrhages filled the lungs with blood and caused catastrophic vomiting and nosebleeds, with victims drowning in their own fluids. Unlike so many strains of influenza before it, Spanish flu attacked not only the very young and the very old, but also healthy adults between the ages of 20 and 40.

The principal factor in the virus’s spread was, of course, the international conflict then in its last phase. Epidemiologists still dispute the exact origins of the virus, but there is some consensus it was the result of a genetic mutation that perhaps took place in China. 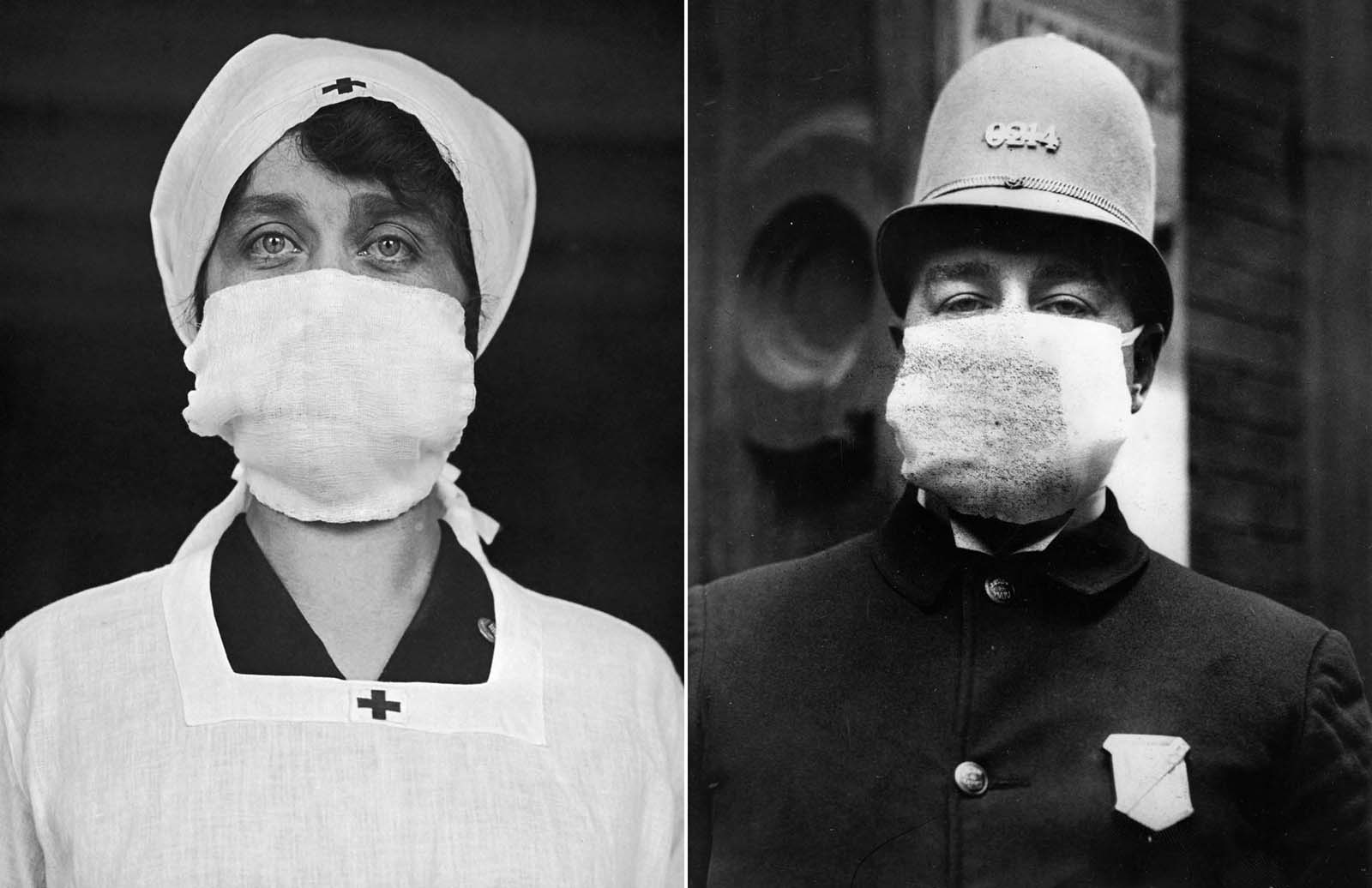 Left: A U.S. Red Cross employee wears a face mask in an attempt to help decrease the spread of influenza. 1918. Right: An American policeman wears a ‘flu mask’ to protect himself from the Spanish flu outbreak that followed World War I. 1918.

But what is clear is that the new strain went global thanks to the massive and rapid movement of troops around the world. The drama of the war also served to obscure the unusually high mortality rates of the new virus. At this early stage, the illness was not well understood and deaths were often attributed to pneumonia.

Two years’ worth of sickness decreased the average American lifespan by 10 years overall. Many cities and entire countries placed full restrictions on all public gatherings and travel, in an attempt to halt the spread of the epidemic.

Theaters, churches, and other public places were closed for over a year, and many funerals were limited to only 15 minutes. In fact, so many people had the virus that, in some locations, everyday life effectively stopped.

Why “Spanish”? To maintain morale, wartime censors minimized early reports of illness and mortality in Germany, the United Kingdom, France, and the United States.

Papers were free to report the epidemic’s effects in neutral Spain (such as the grave illness of King Alfonso XIII). This created a false impression of Spain as especially hard hit, thereby giving rise to the pandemic’s nickname, “Spanish flu”. 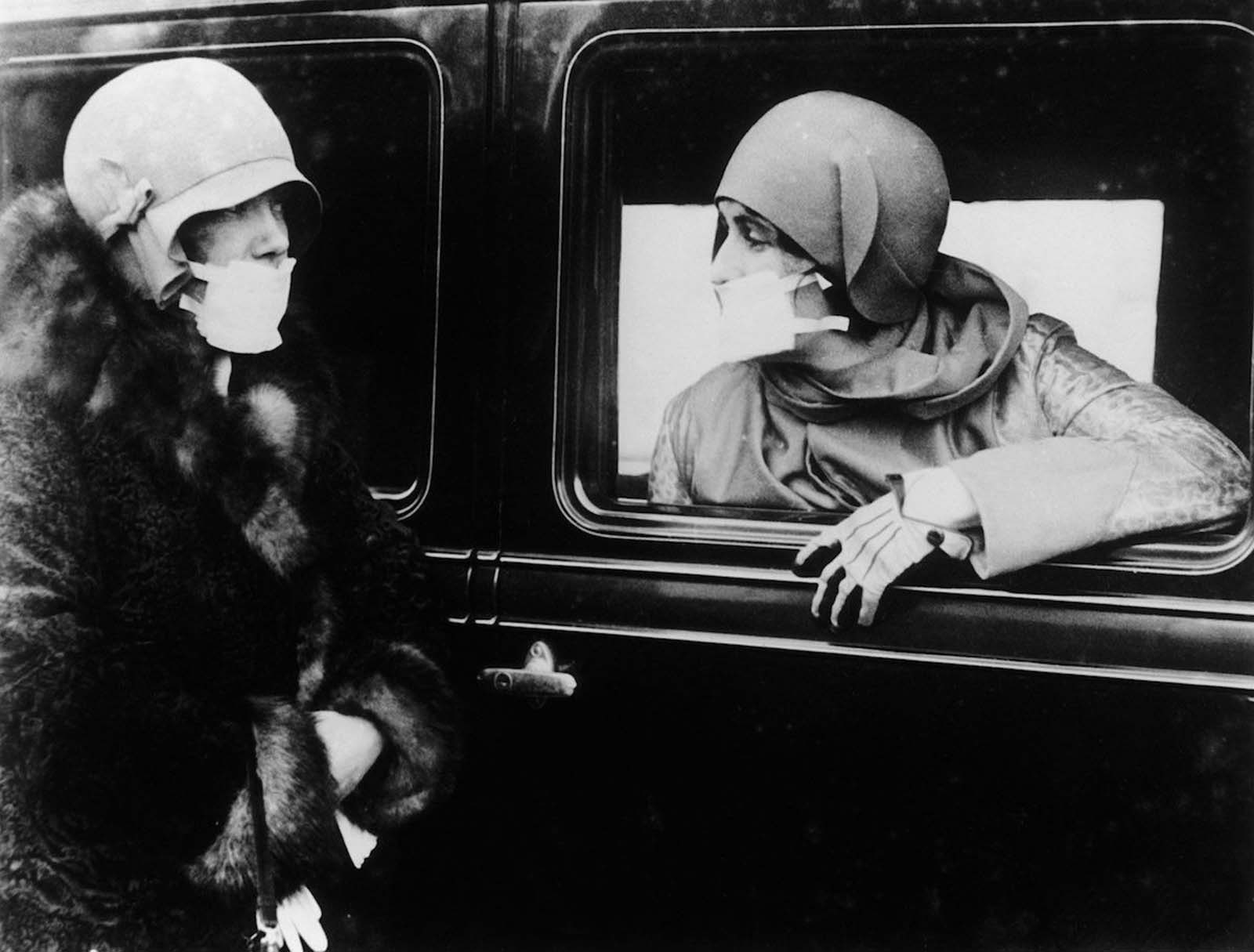 Two women speak through flu masks during the epidemic. 1918. 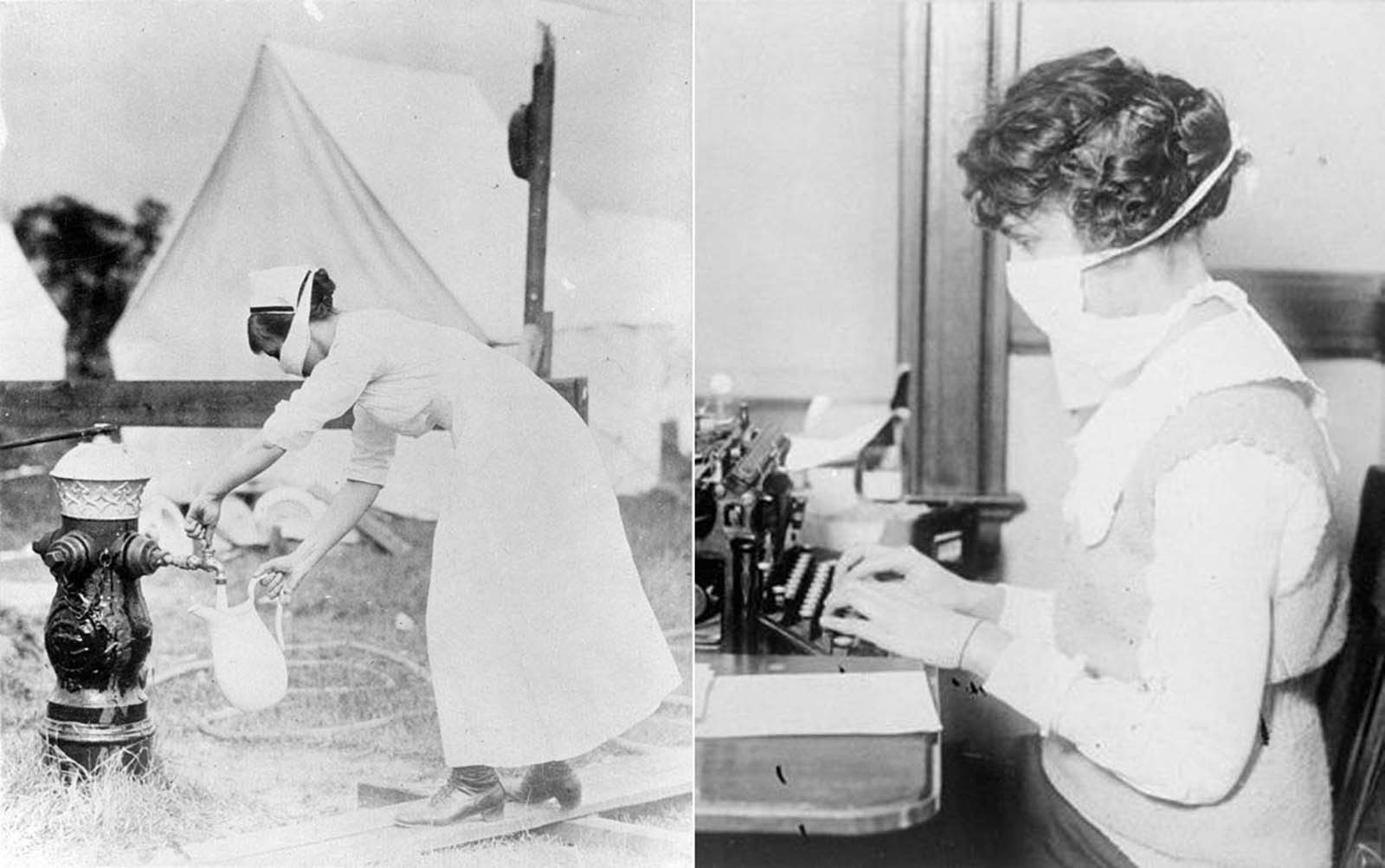 Left: A nurse protects herself while fetching water. Right: A typist works while wearing a mask, in New York City. 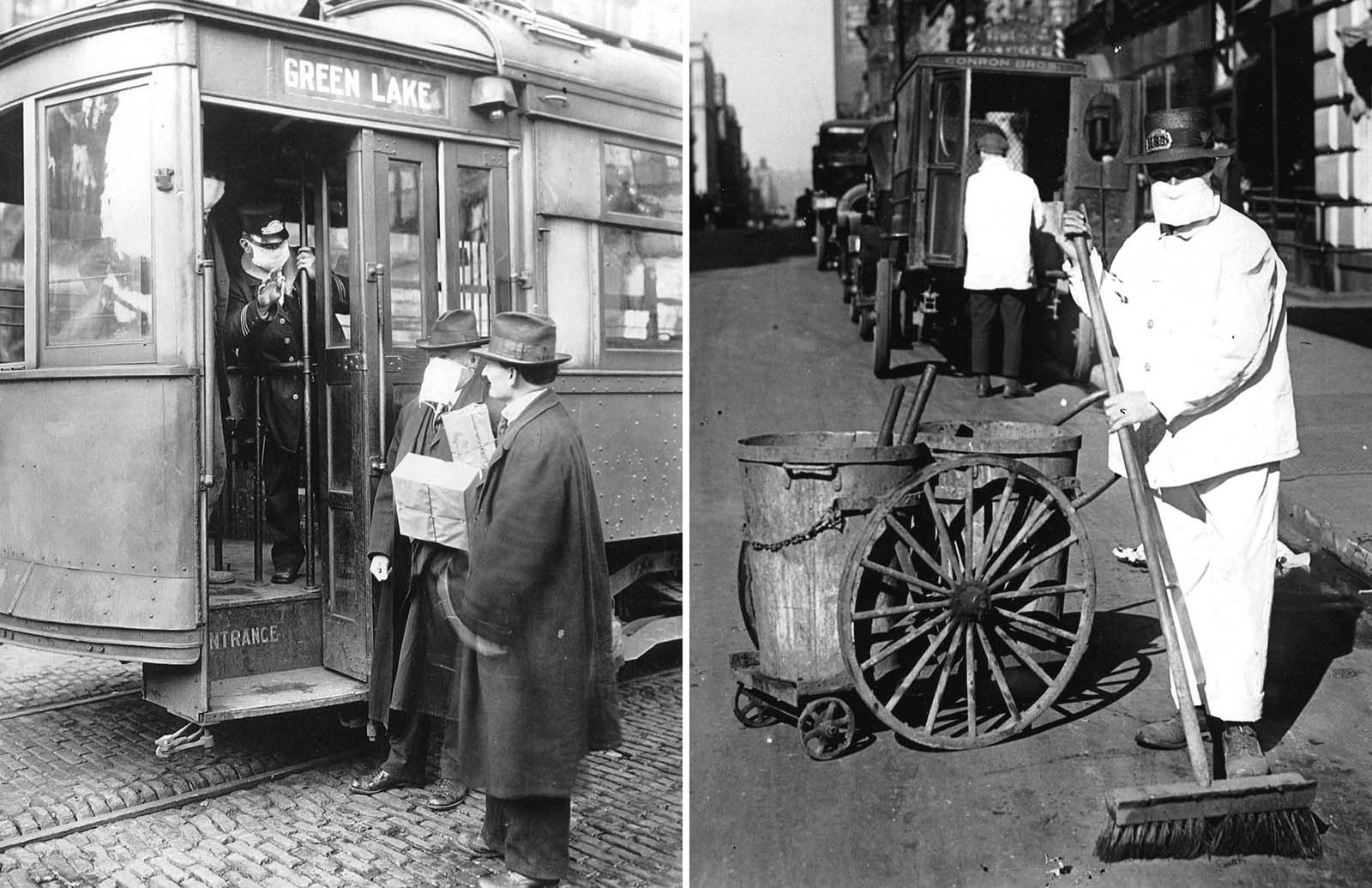 Left: A Seattle, Washington streetcar conductor refuses entry to a commuter who is not wearing a mask. Precautions taken in the city required passengers to wear masks on public transportation. Right: A New York city street sweeper wears a mask to help check the spread of influenza. 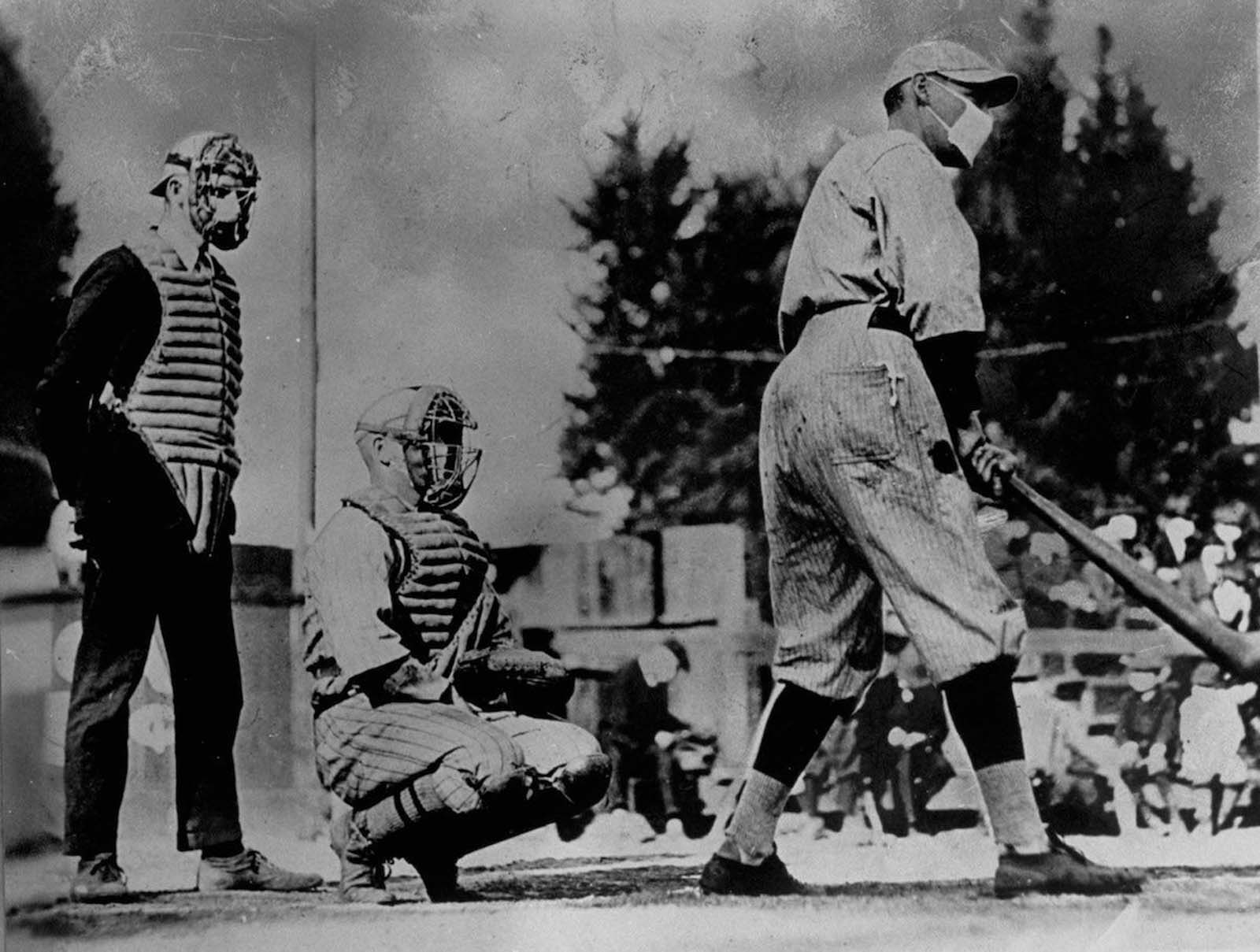 Unident baseball players, one batting and one catching, plus an umpire behind the plate, wear flu masks. 1918. 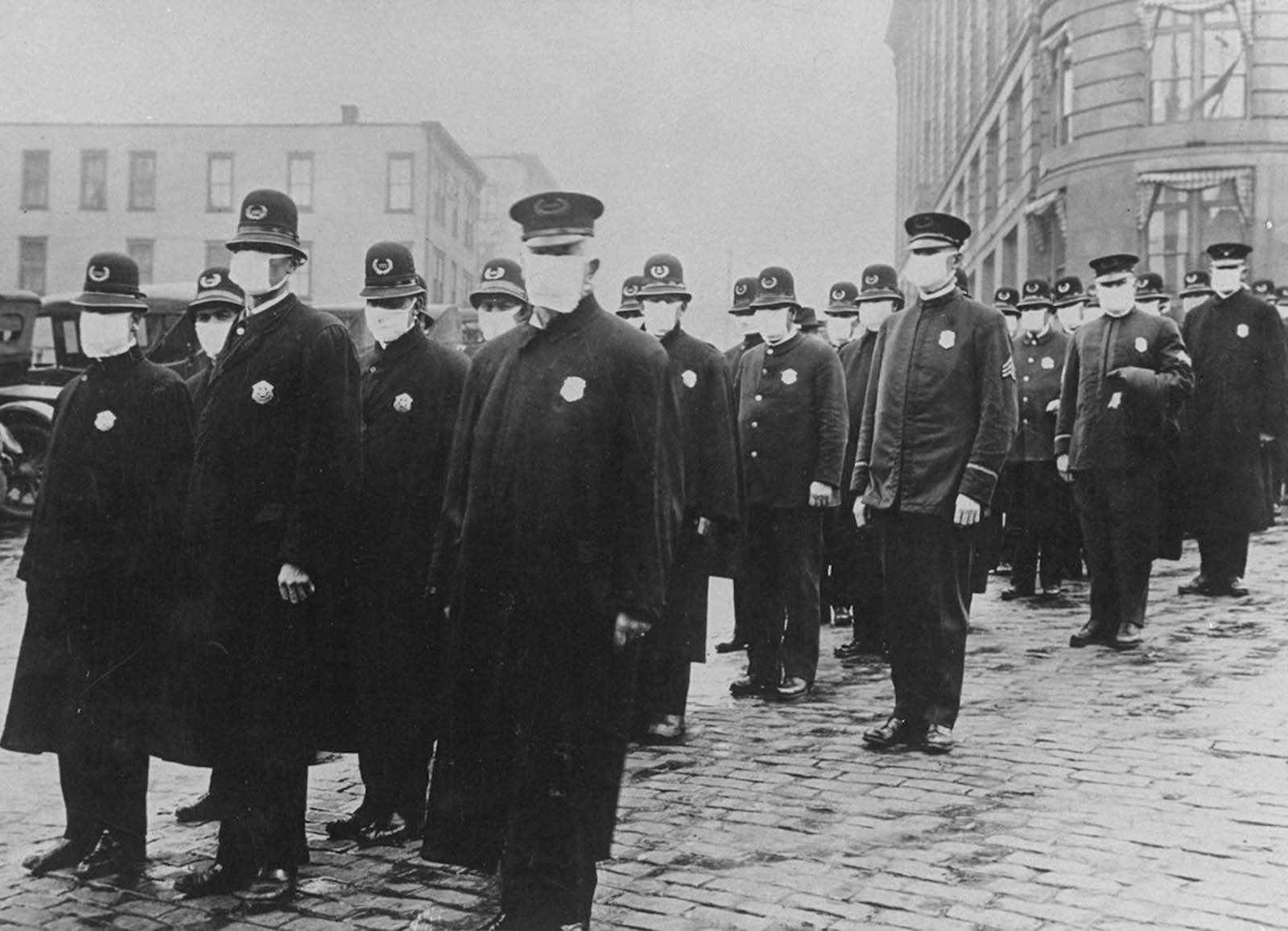