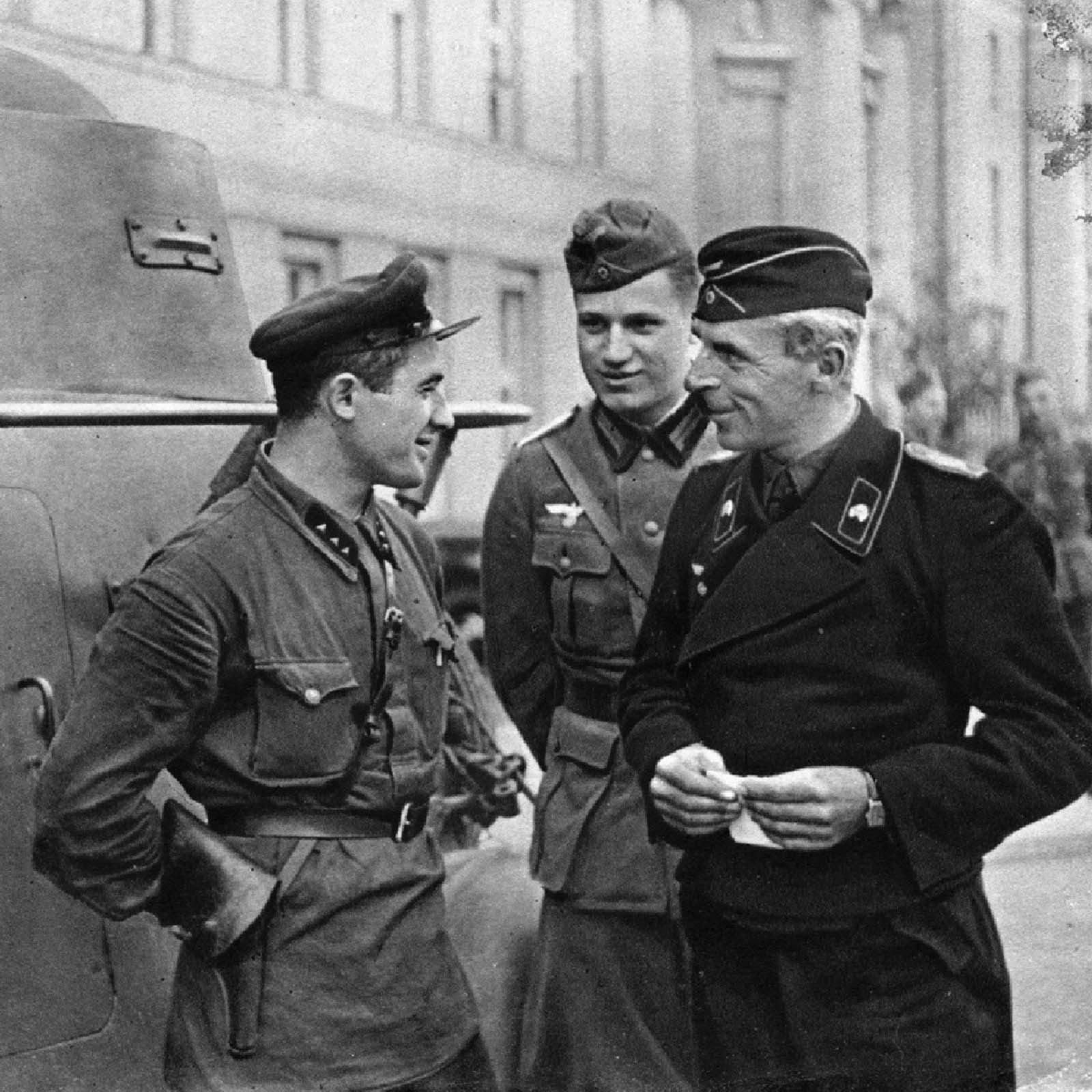 Soviet and German officials having a friendly conversation in the newly captured Polish city of Brest, September 1939.

On the left – Soviet officer, on the right – German officer, in the middle – German unteroffizier and probably translator. USSR and Nazi Germany worked together in conquering Eastern Europe of which this picture is a testimony.

This photo was taken during Soviet-German Military Parade in Brześć-nad-Bugiem, Sep. 22, 1939. Soviets and Germans met to celebrate the victory over Poland. That September, in violation of their own treaties with Poland, both of these allies invaded and partitioned the Second Polish Republic. Thus began World War II.

The Soviet and German troops met on numerous occasions. The most remarkable event of this kind occurred at Brest-Litovsk on 22 September. The German 19th Panzer Corps—commanded by General Heinz Guderian — had occupied the city, which lay within the Soviet sphere of interest.

When the Soviet 29th Tank Brigade—commander by S. M. Krivoshein — approached, the commanders negotiated that the German troops would withdraw and the Soviet troops would enter the city saluting each other. At Brest-Litovsk, Soviet and German commanders held a joint victory parade before German forces withdrew westward behind a new demarcation line.

The Molotov-Ribbentrop Pact on 23 August 1939 included a secret protocol that divided territories of Poland between Germany and the Soviet Union.

The Soviets agreed to aid Germany in the event of France or Britain going to war with Germany over Poland and, in a secret protocol of the pact, the Germans and the Soviets agreed to divide Eastern Europe, including Poland, into two spheres of influence; the western 1/3 of the country was to go to Germany and the eastern 2/3 to the Soviet Union.

According to Stalin, the joint aim of the Soviet Union and Nazi Germany was to “re-establish peace and order” in the territories of the “former Polish state”, which had been destroyed by the “collapse of the former Polish state”, and to help the Polish people establish new conditions for its political life.

Needless to say, that the “collapse of the former Polish state” had been brought about by the very powers which now promised to “re-establish peace and order”.