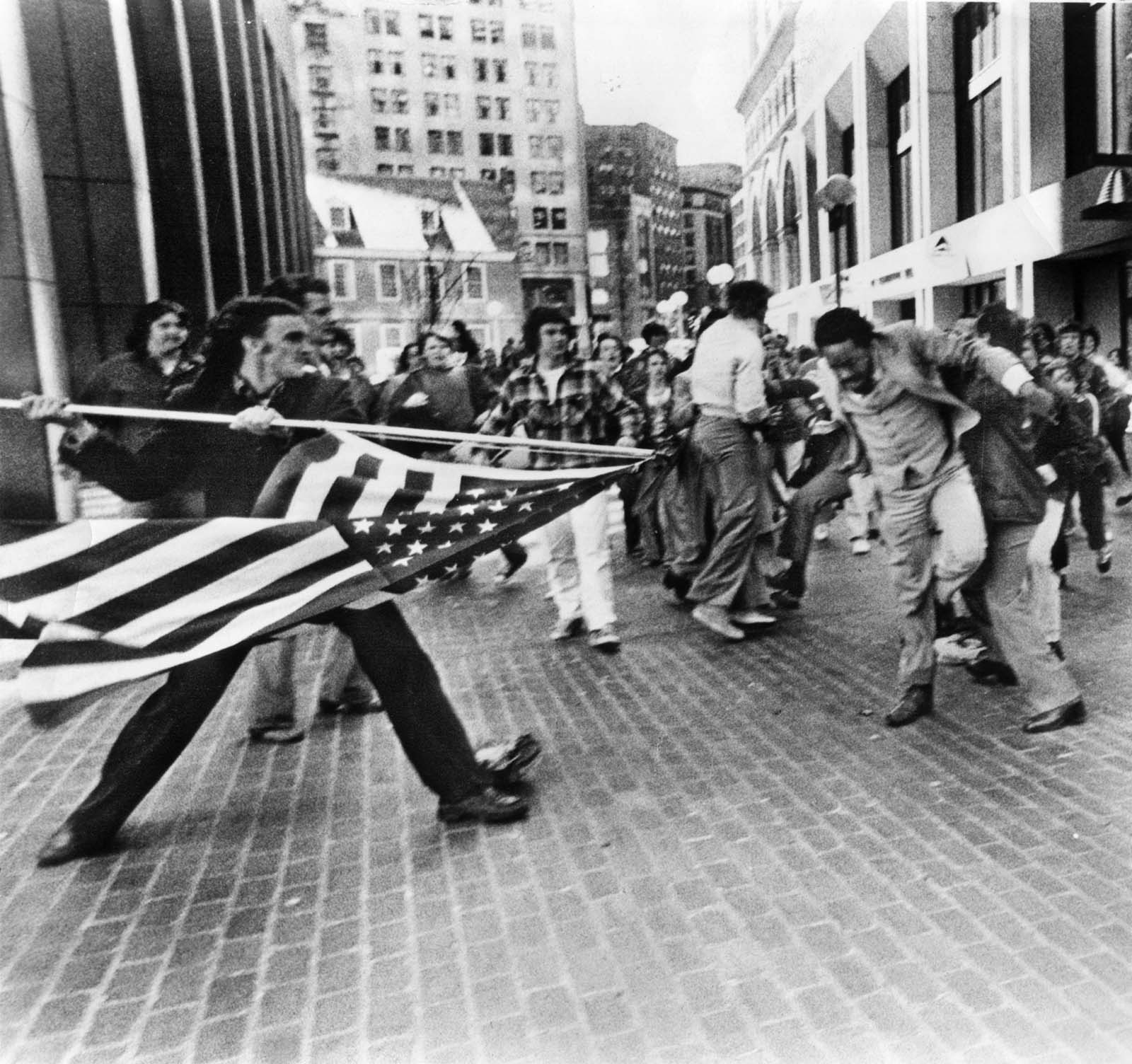 “The Soiling of Old Glory” was taken on April 5, 1976, during the Boston busing desegregation protests.

Stanley Forman was early for his shift at the Herald American on April 5th, 1976 and he decided to head out to an anti-busing demonstration at Boston City Hall that another journalist was already covering.

It was already two years into a desegregated school-busing in Massachusetts, a scheme that forcibly bused students to schools often far from their homes in an effort to diversify schools, but the protests in favor of the old system were still raging.

Forman managed to capture a photograph that would later become iconic. The photograph depicts a white teenager, Joseph Rakes, assaulting a black man, lawyer, and civil rights activist Ted Landsmark, with a flagpole bearing the American flag as Landsmark was on his way to a meeting in the courthouse. Landsmark was active in trying to get more minority contractors in the construction industry, but he hadn’t been paying attention to the busing protests.

According to Landsmark: “I had difficulty finding a parking space in downtown Boston, and I was running a few minutes late for the meeting in city hall. So I was in a hurry and perhaps not paying as much attention as I might have as I approached a corner, where the young demonstrators were coming in the other direction. I did not see them until both they and I were at that corner”.

Rakes was swinging the flag and trying to hit him, not trying to spear him as it appears in the photo, and he narrowly missed. Landsmark was bloodied during the incident.

An examination of all the photographs in the roll Forman shot reveals that Rakes missed Landsmark with the flag. Landsmark had already been knocked to the ground, losing his glasses and suffering a broken nose, by the time he got up the famous picture was taken.

Rakes was convicted of assault with a deadly weapon and sentenced to two years imprisonment and two years probation. The jail sentence was suspended. In 1983 the Boston police issued a warrant alleging that Rakes had beaten to death the brother of his girlfriend.

He fled prosecution but returned in 1988 after the murder charge was dropped. Rakes carried the stigma of being known as “the flag kid”, but eventually turned his life around, getting married and having a family while laboring as a construction worker and later in hazardous waste.

The next day, the picture appeared on the front pages of the Washington Post, Chicago Tribune, and San Francisco Chronicle, among many others, and inside The New York Times. It won the 1977 Pulitzer Prize for breaking news photography.