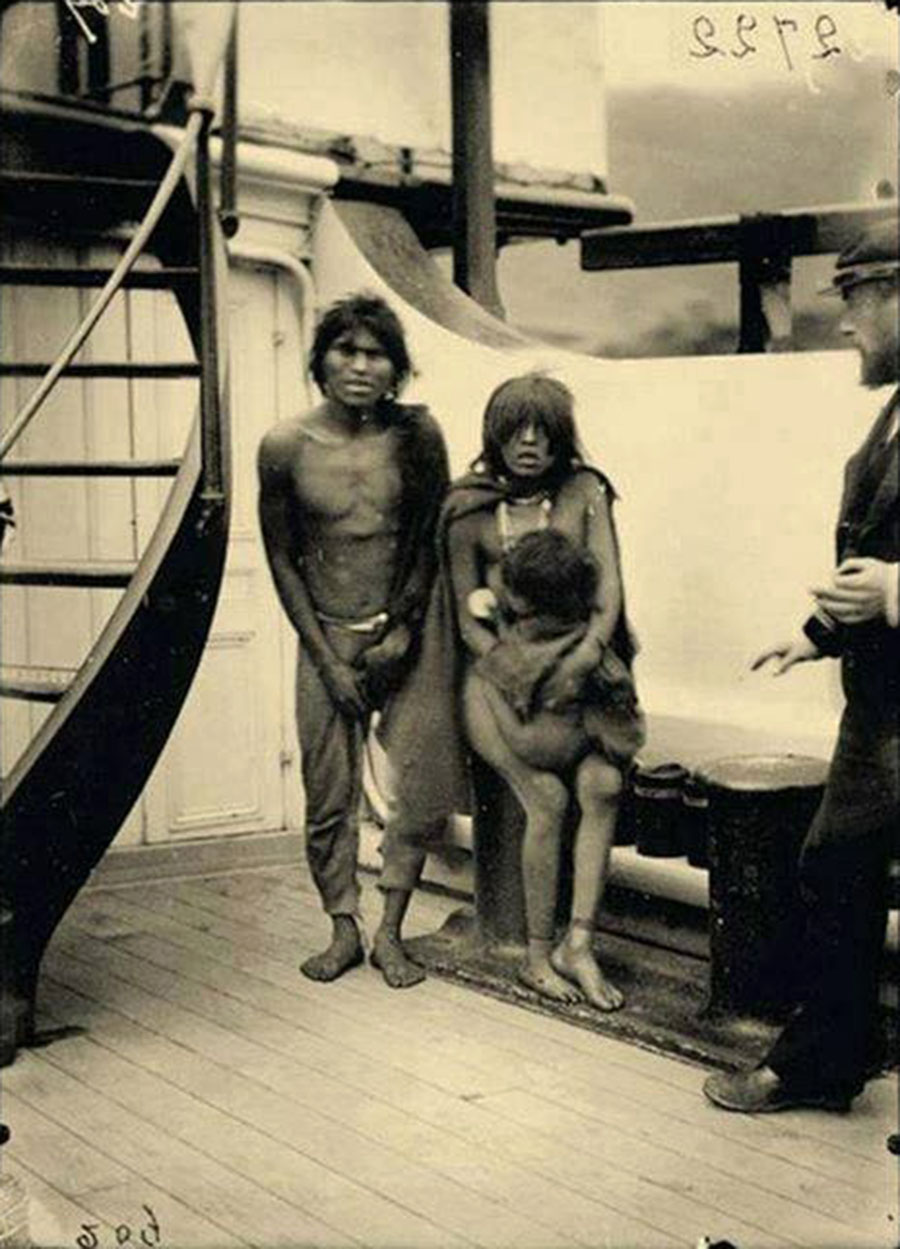 They were photographed, measured, weighed, and were expected to perform every day. Sometimes 6 to 8 times a day. The Selknams did not receive the best care. Therefore, many of them did not make it back. Some did not even make it to Europe.

But why would civilized people do such a thing as showing other people in zoos?

From a sociological point of view, it’s understandable: a much more technologically advanced civilization lacking the modern-day sensibilities and political correctness finds a primitive civilization living in a neolithic fashion so they immediately assume they’re lower than them. It happened countless times in history.

In the Jiu Tang Shu (The History of the Tang Dinasty) you can find examples of black slaves brought to China by Arab merchants and slave traders who were then acquired by rich Chinese people and used by the nobility of Guangzhou as amusement (for example they were put as doorkeepers during parties to scare and impress the arriving guests).

A few centuries after that the Emperor of China sent emissaries to Malindi (East Africa) to bring him exotic animals, they brought him a giraffe (which marveled the Emperor to no end, he called it a godly beast and ordered his best artist to honor the giraffe with a painting. 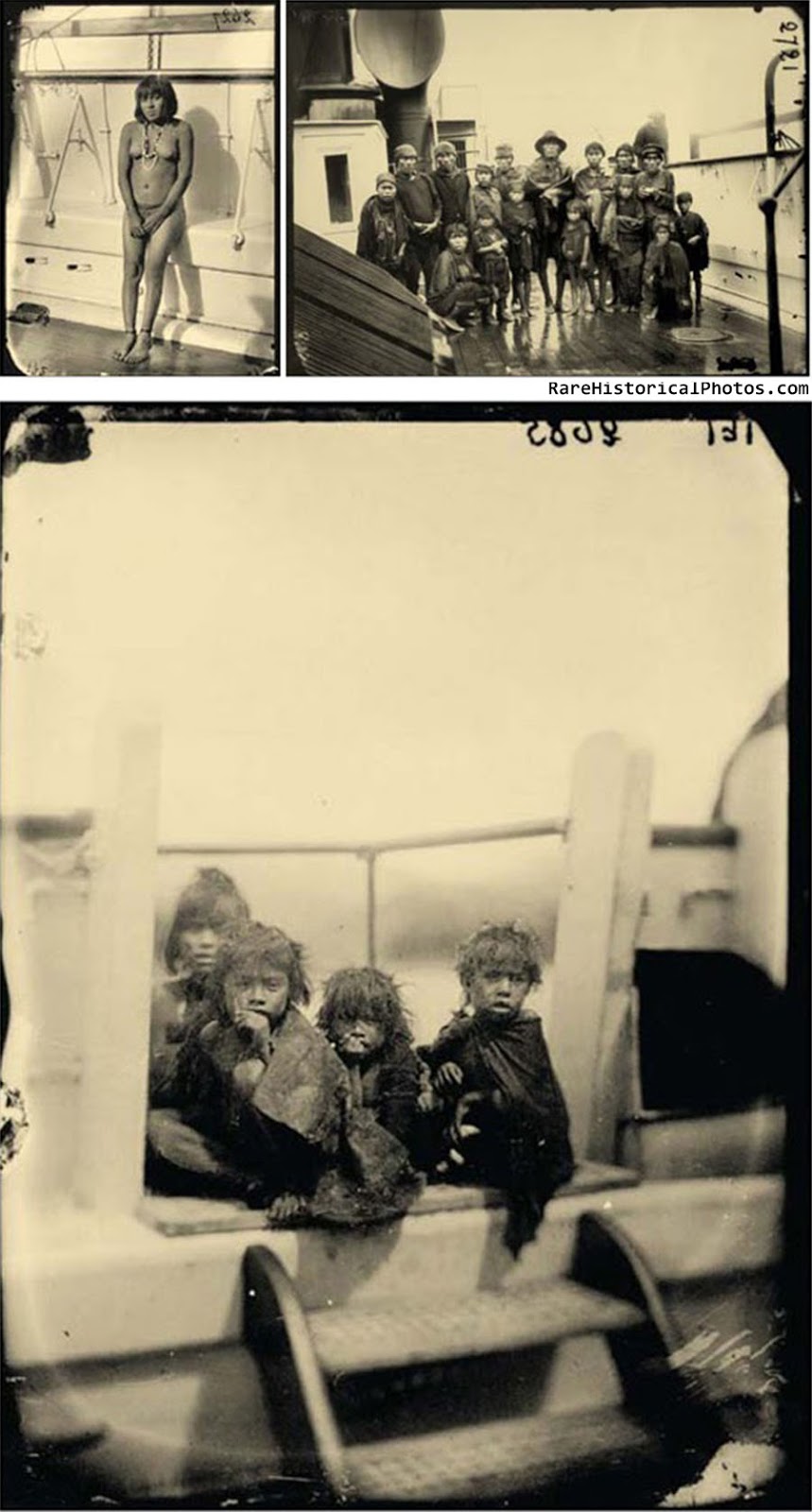 Selknam natives en route to Europe for being exhibited as animals in Human Zoos, 1899.

The Selknam people, also known as the Ona, lived in the Patagonian region of southern Chile and Argentina including the Tierra del Fuego islands.

They were one of the last aboriginal groups in South America to be reached by Westerners, in the late 19th century when the Chilean and Argentine governments began efforts to explore and integrate Tierra del Fuego (literally, the “land of fire” based on early European explorers observing Selk’nam smoke from their bonfires).

The Selknam spoke a Chon language. Hunters and gatherers, the Selk’nam were characterized by their tall height (5’11” on average), physical strength, and toughness in adapting to the most hostile and extreme environments.

They were also highly concerned with their personal presentation. They relished any opportunity to paint their bodies and faces. In fact, the initiation ceremony known as Hain was a defining moment in Selk’nam culture in which teenage males would pass to adulthood through numerous mental and physical tests that could last months on end.

These ceremonies were highly secretive meetings organized by adult men who would simulate spirits of the universe with very well-defined figures and personalities. 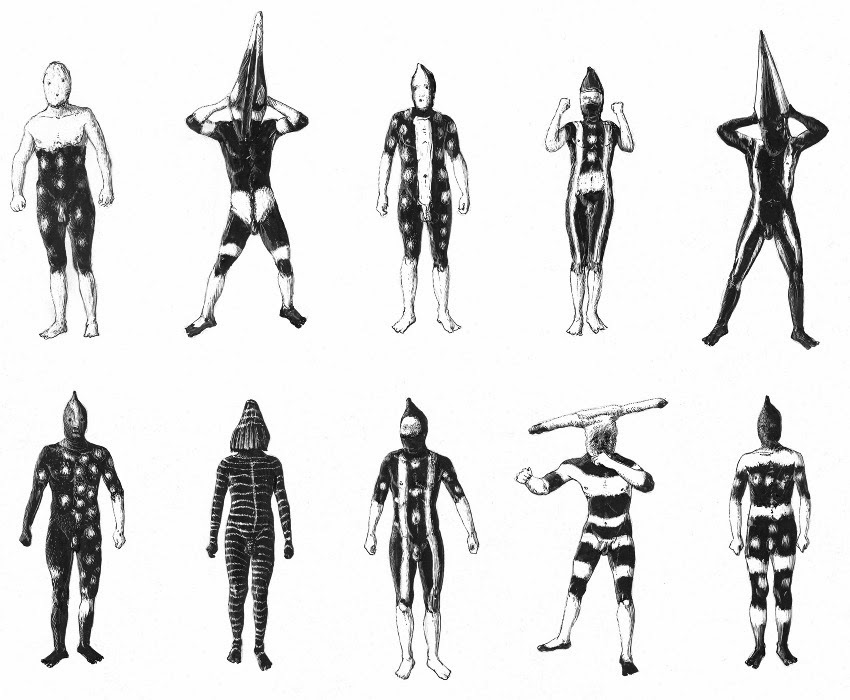 Some of these spirits were believed to have emerged from the depths of the earth and others from the sky. With the help of guanaco leather masks, tree bark, paint over their bodies, and other earthly elements, these actors managed to successfully conceal their human condition and emulate the spirits.

The Selk’nam avoided contact with Spanish colonizers. The Spanish killed most of the local animals which were the food source for the Selk’nam and used a great part of the land of Tierra del Fuego to establish large estancias – sheep ranches.

Selk’nam, who lacked an understanding of sheep herds as private property, hunted sheep, behavior which was perceived as banditry by ranch owners. Ranchers supported armed groups to hunt down and kill the Selk’nam. To receive their bounty, such groups first had to return with the ears of the victims. 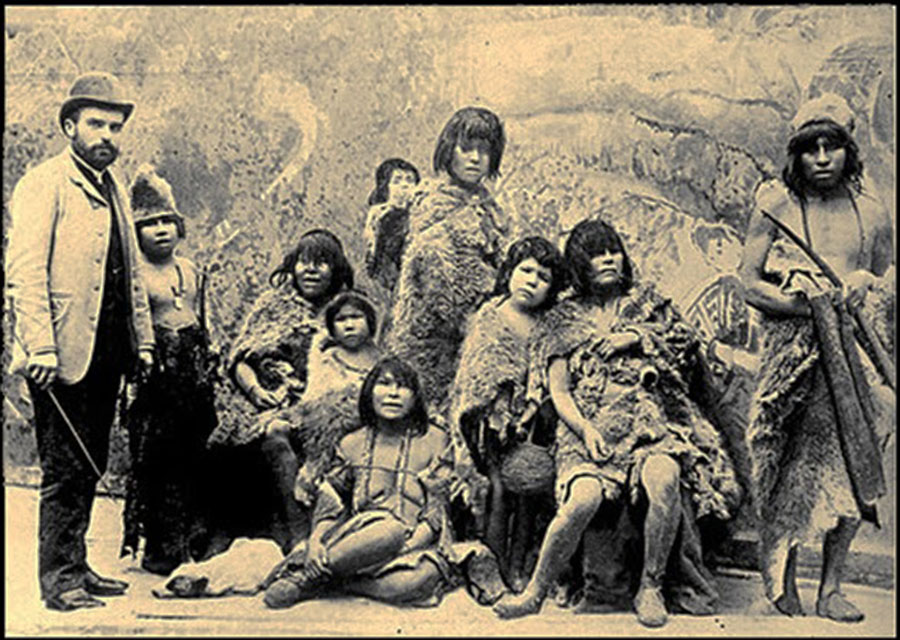 The businessman Maurice Maitre alongside Selknam group in the Universal Exhibition in Paris in 1889. In the picture, he basically looks like a lion tamer.

Alejandro Cañas estimated that in 1896 there was a population of 3,000 Selk’nam. Martín Gusinde, an Austrian ethnologist who studied them in the early 20th century, wrote in 1919 that only 279 Selk’nam remained. In 1945 the Salesian missionary, Lorenzo Massa, counted 25. In May 1974, Ángela Loij died; she was the last full-blood Selk’nam.

The tribe is extinct, although descendants of partial Selk’nam ancestry are likely. According to the 2010 United Nations Educational, Scientific and Cultural Organization (UNESCO) Atlas of the World’s Languages in Danger, the Ona language is extinct, as the last speakers died in the 1980s.