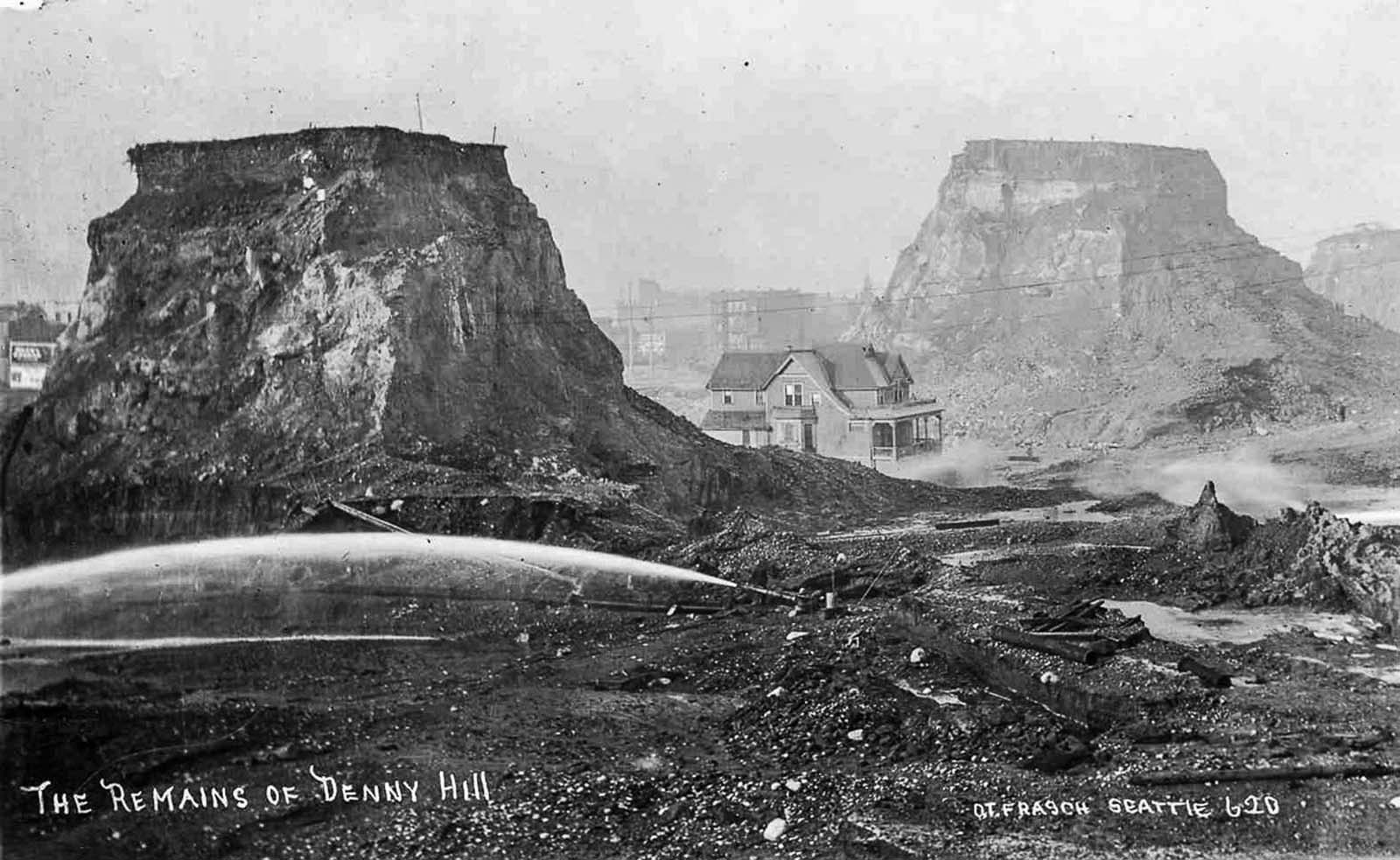 Denny Hill is slowly washed away by powerful water cannons. 1910.

Starting in 1897 and continuing through 1930, the hilly topography of central Seattle was radically altered by a series of regrades, in what might have been the largest such alteration of urban terrain at the time.

The regrading strategy was adopted for one main reason—economics. The idea was that reshaping the land would open up the city to more commerce. The earliest urban planners for the city believed that if the streets were at regular angles and at a level elevation, business would thrive.

Engineers and workers moved mountains, straightened rivers, leveled hillsides, dug sewers, paved roads, and carved canals as part of making Seattle. As Clarence Bagley wrote in his 1916 History of Seattle, “No great city on the American continent has overcome so many natural obstacles encountered in its growth.” Seattle, Bagley concluded, was literally “one vast reclamation project.”

These regrading projects began after the 1889 fire that destroyed much of Seattle’s downtown retail district. After the blaze, City Engineer R. H. Thomson initiated an ambitious plan to reinvigorate the city.

He convinced the municipal government to level hills, fill tidelands, straighten the Duwamish River, and purchase the Cedar River watershed. Most of these projects were completed between 1890 and 1930, when Seattle matched Bagley’s description of a city under near-constant construction. 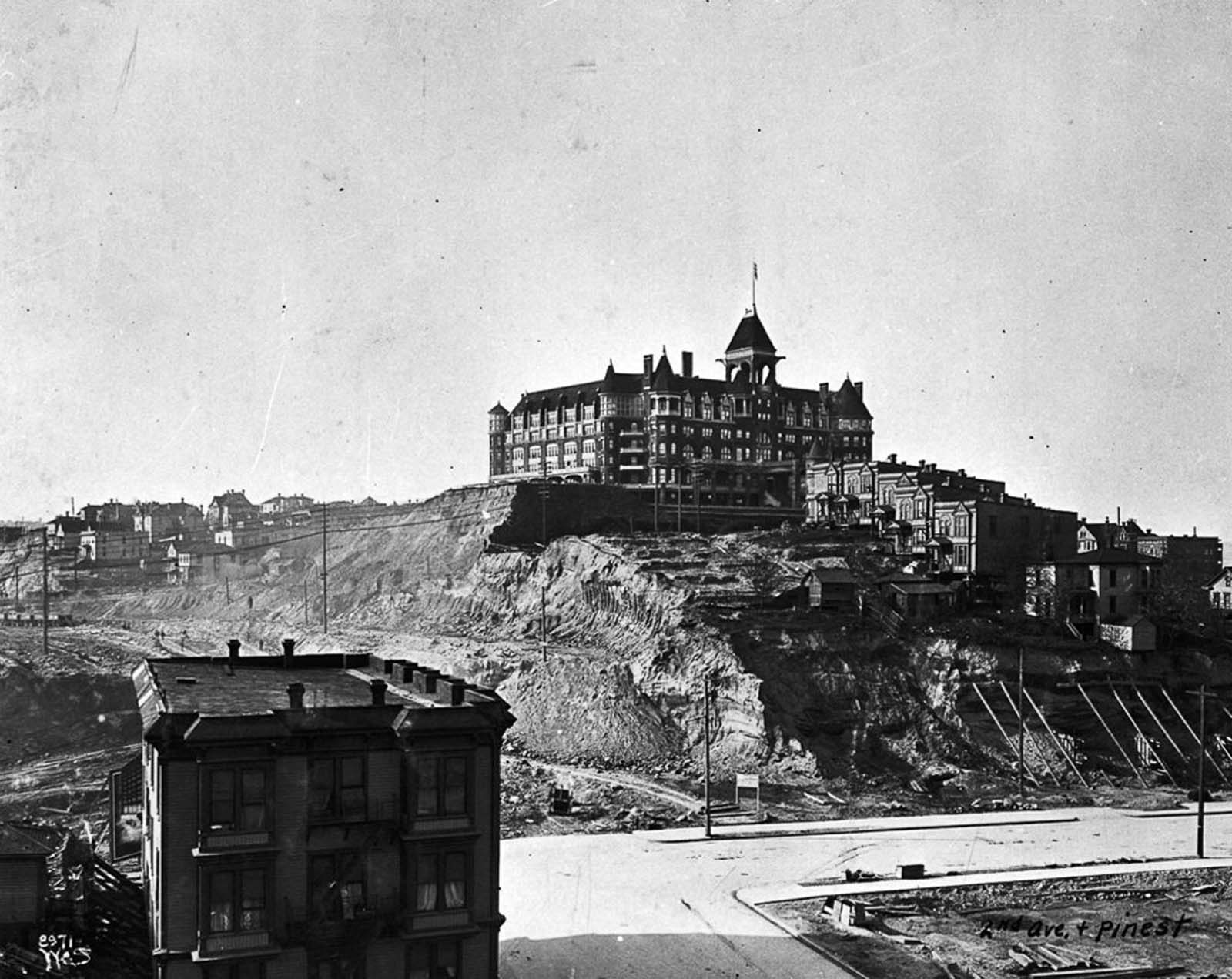 The Denny Hotel (later called the Washington Hotel) stands on the south summit of Denny Hill before being torn down. 1905.

Seattle had several regrading projects, but one of the most notable was the Denny Regrade, which was completed in two phases.
Denny Regrade No. 1 (1908–1911) sliced away the entire half of the hill closest to the waterfront, about 27 city blocks extending from Pine Street to Cedar Street and from Second to Fifth Avenues. 20,000,000 US gallons (75,708 m3) of water a day were pumped from Lake Union, to be aimed at the hill as jets of water, then run through tunnels to Elliott Bay.

Much of the motivation for the regrade had been to increase land values, but the area opened up—the heart of today’s Belltown—was left as a strip cut off from much of the rest of the city by the remaining eastern half of the hill, whose western face offered no route of approach.

Meanwhile, property owners and investors hesitated to build on the remaining portion of the hill, because they considered it likely that their buildings would eventually be destroyed in the next phase of the regrading process, which was now well under way.

The result was Denny Regrade No. 2, begun in February 1929 and lasting 22 months. This time, the technology was power shovels rather than sluicing, with earth carried to the waterfront by conveyor belts, then placed on specially designed scows and dumped in deep water.

The scows were intentionally designed to capsize in a controlled manner. They were symmetrical top-to-bottom and side to side; a seacock could be opened to fill one side with water. In three minutes it would capsize, dump its load, bob up, empty the tank, and right itself.

One of the buildings demolished in Denny Regrade No. 2 was the Denny School on Battery Street between 5th and 6th Avenues. Opened in 1884, it had been described as “an architectural jewel… the finest schoolhouse on the West Coast”. 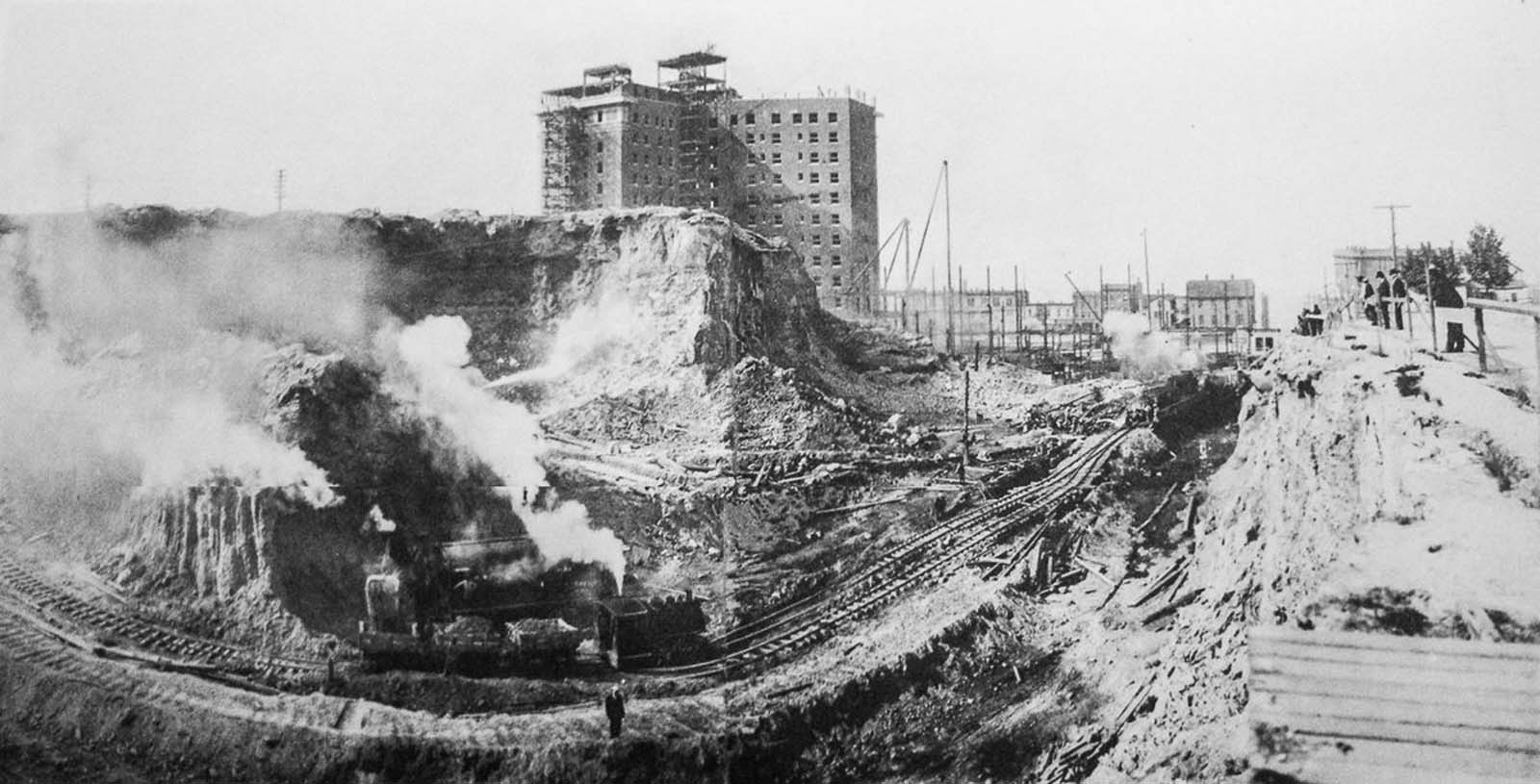 Trains move loose earth at the south summit of Denny Hill near the under-construction New Washington Hotel, at the corner of Second Avenue and Stewart Street. 1907. 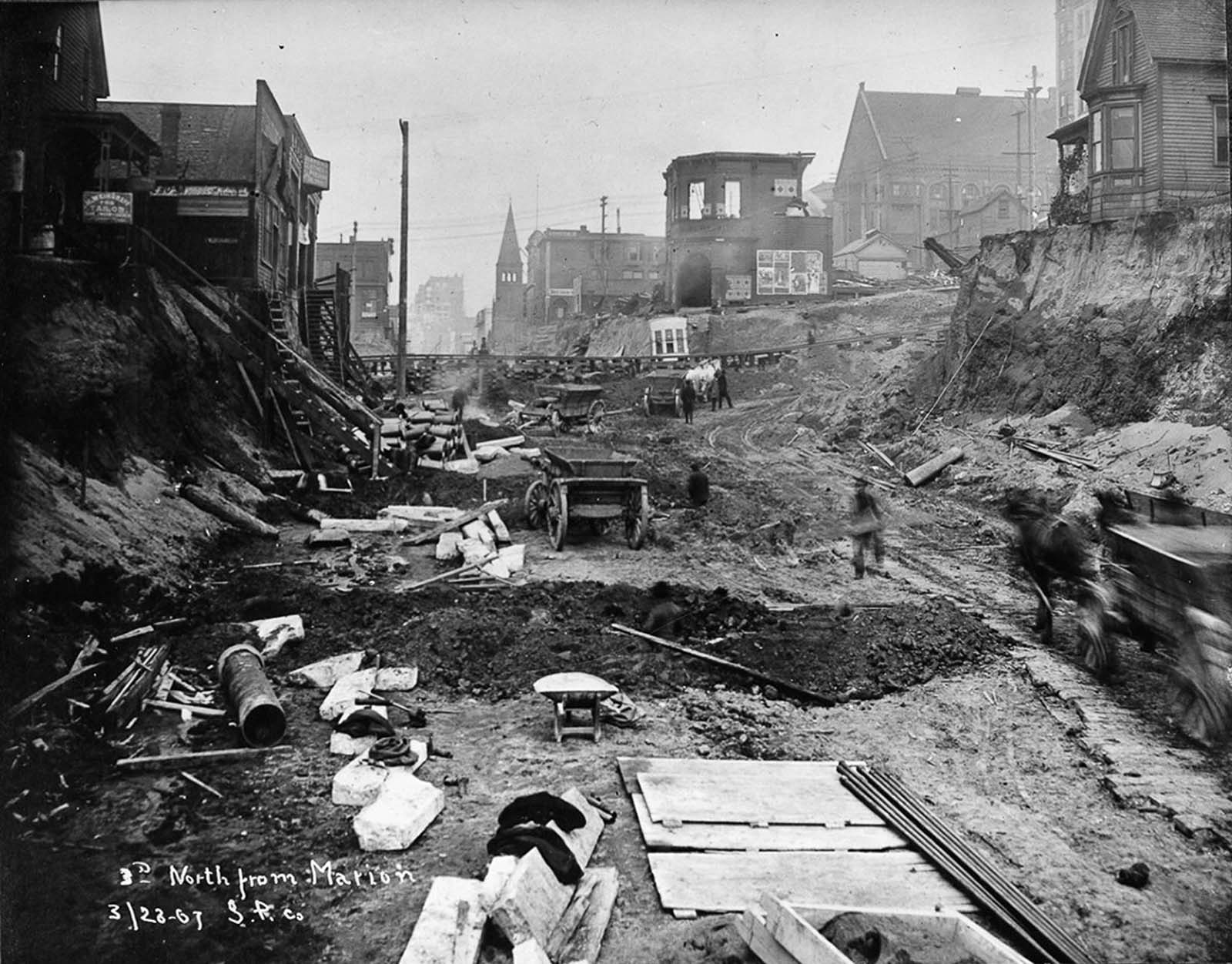 Third Avenue north of Marion Street is flattened out in the first Denny regrade. 1907. 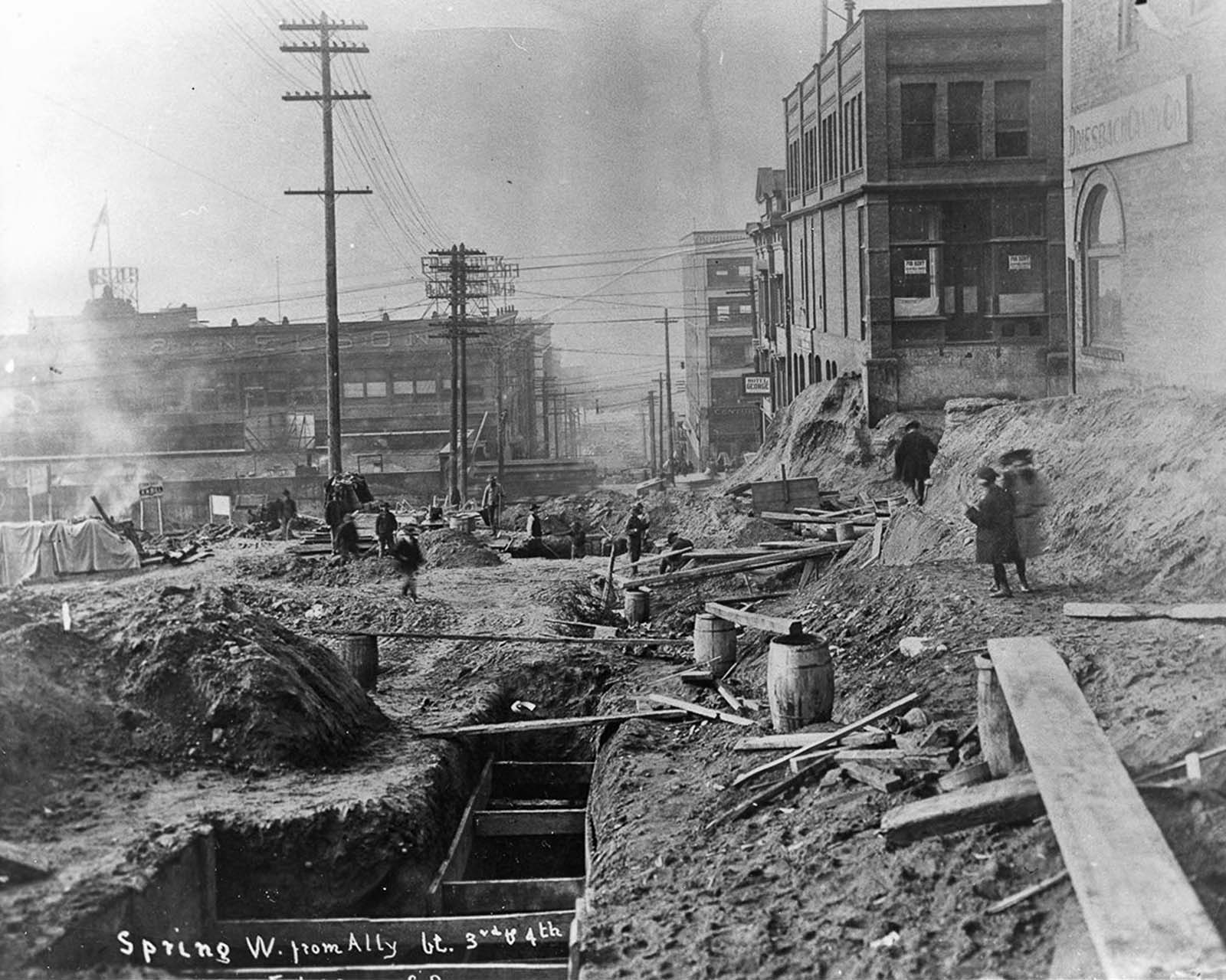 Looking west down Spring Street during the first Denny regrade. 1907. 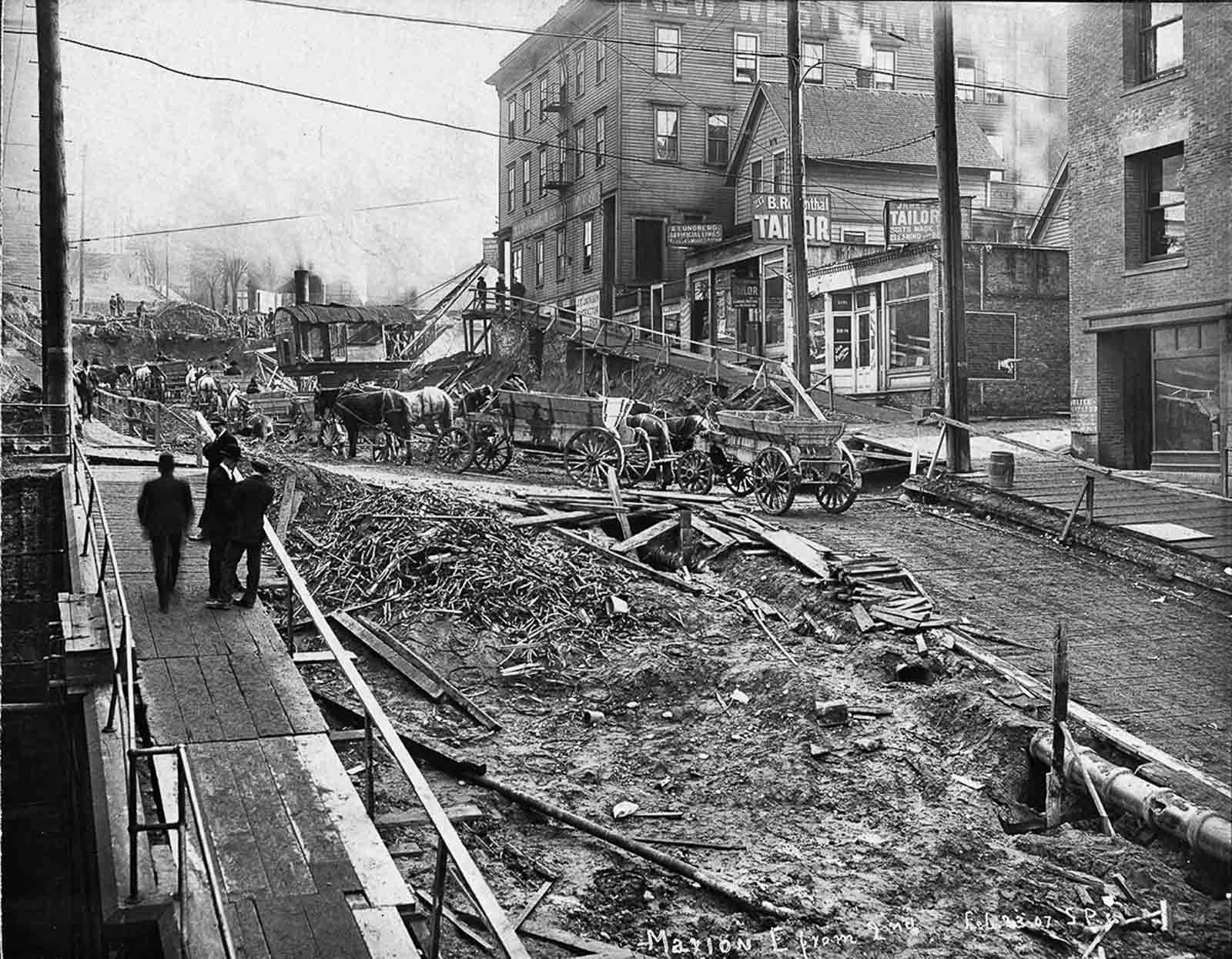 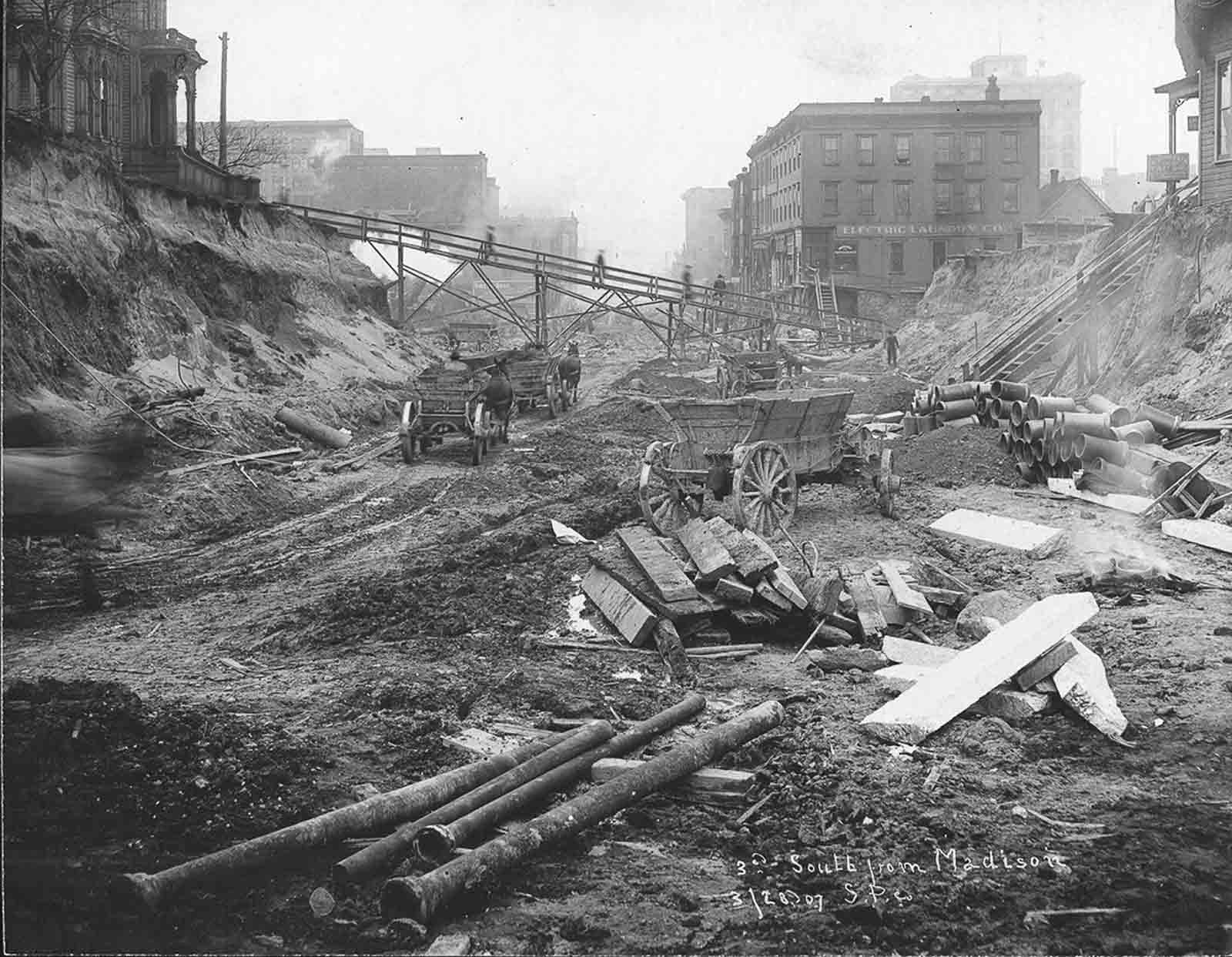 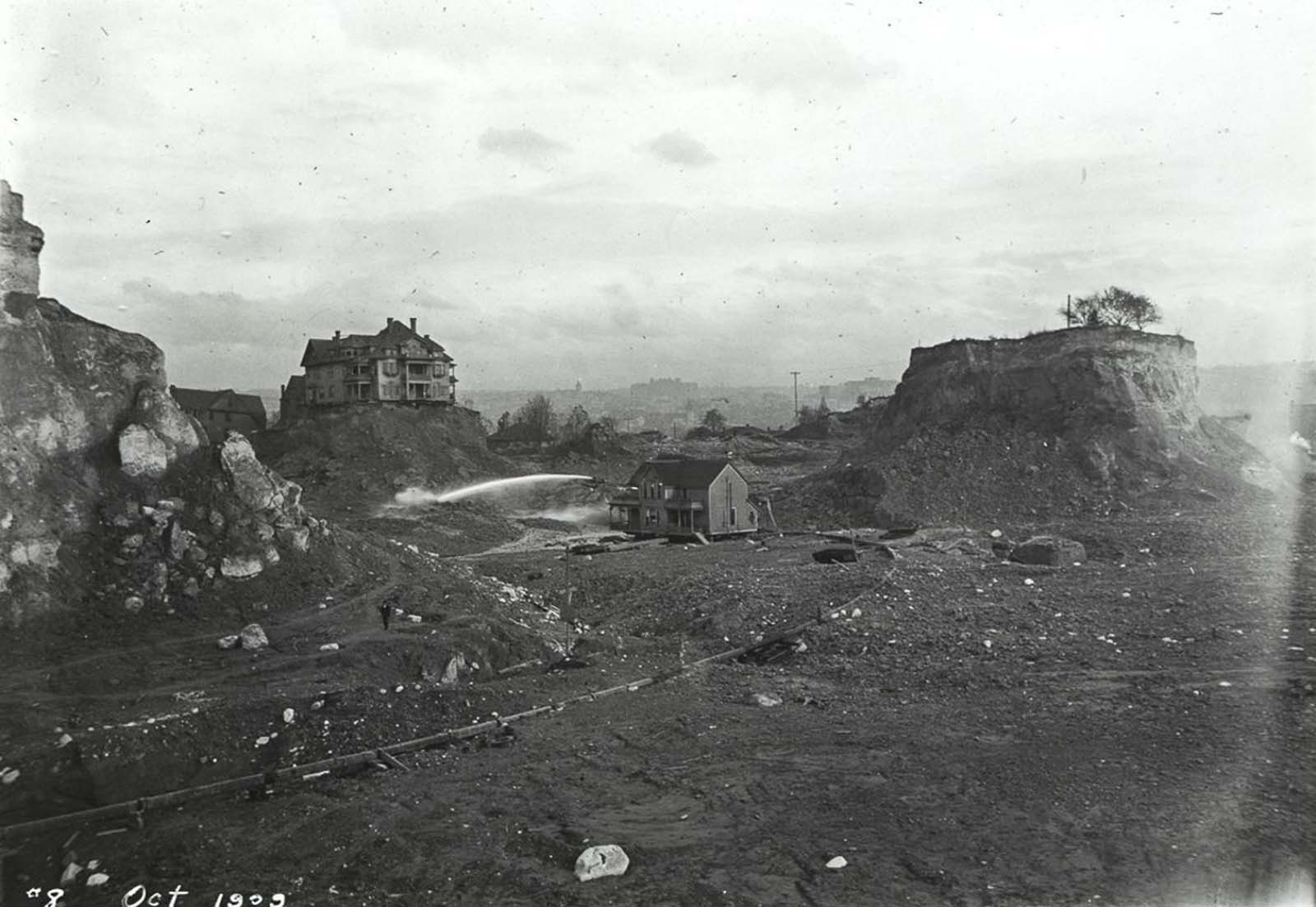 A few “spite mounds” stand amid the flattened remains of Denny Hill. 1909. 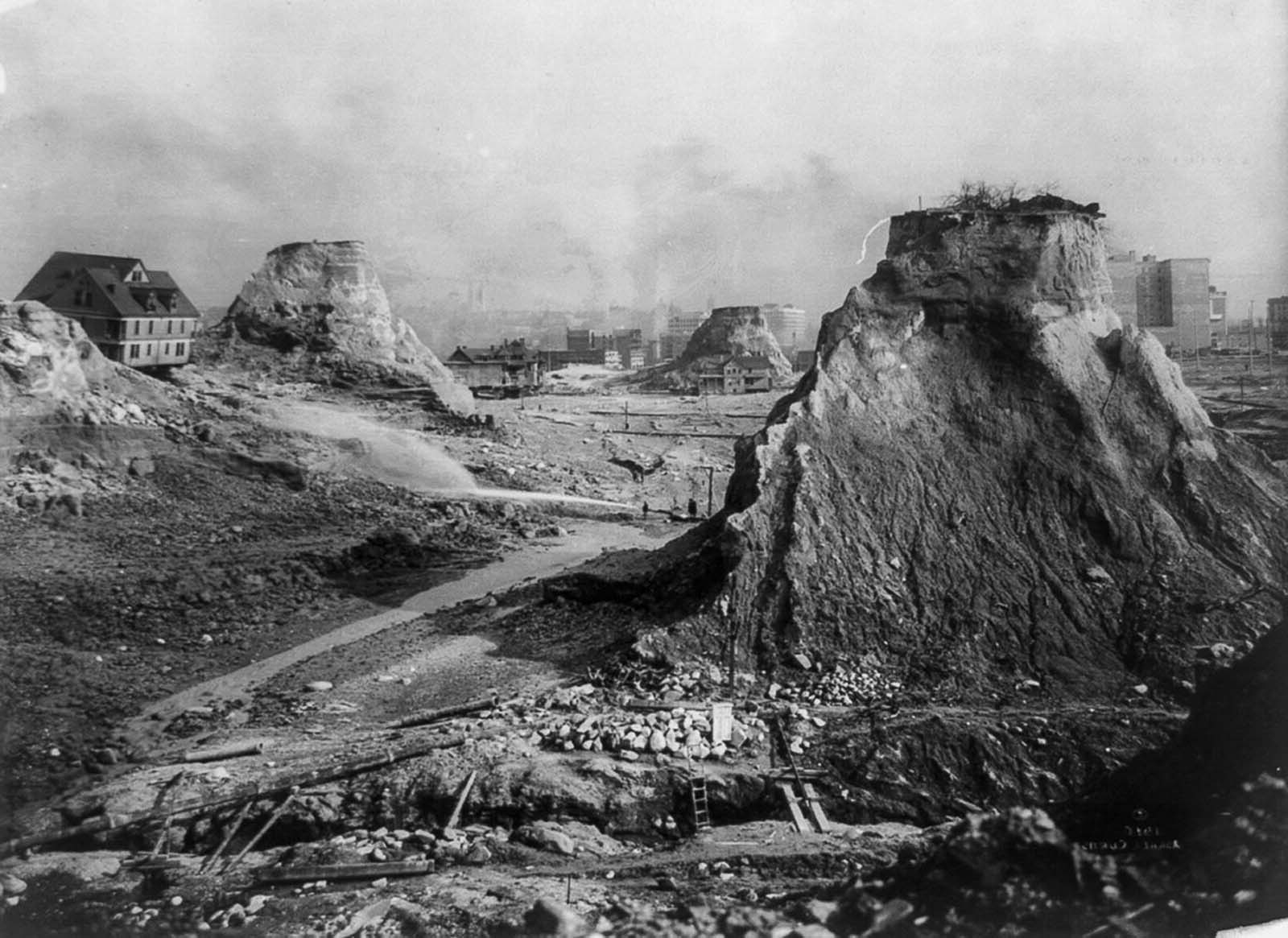 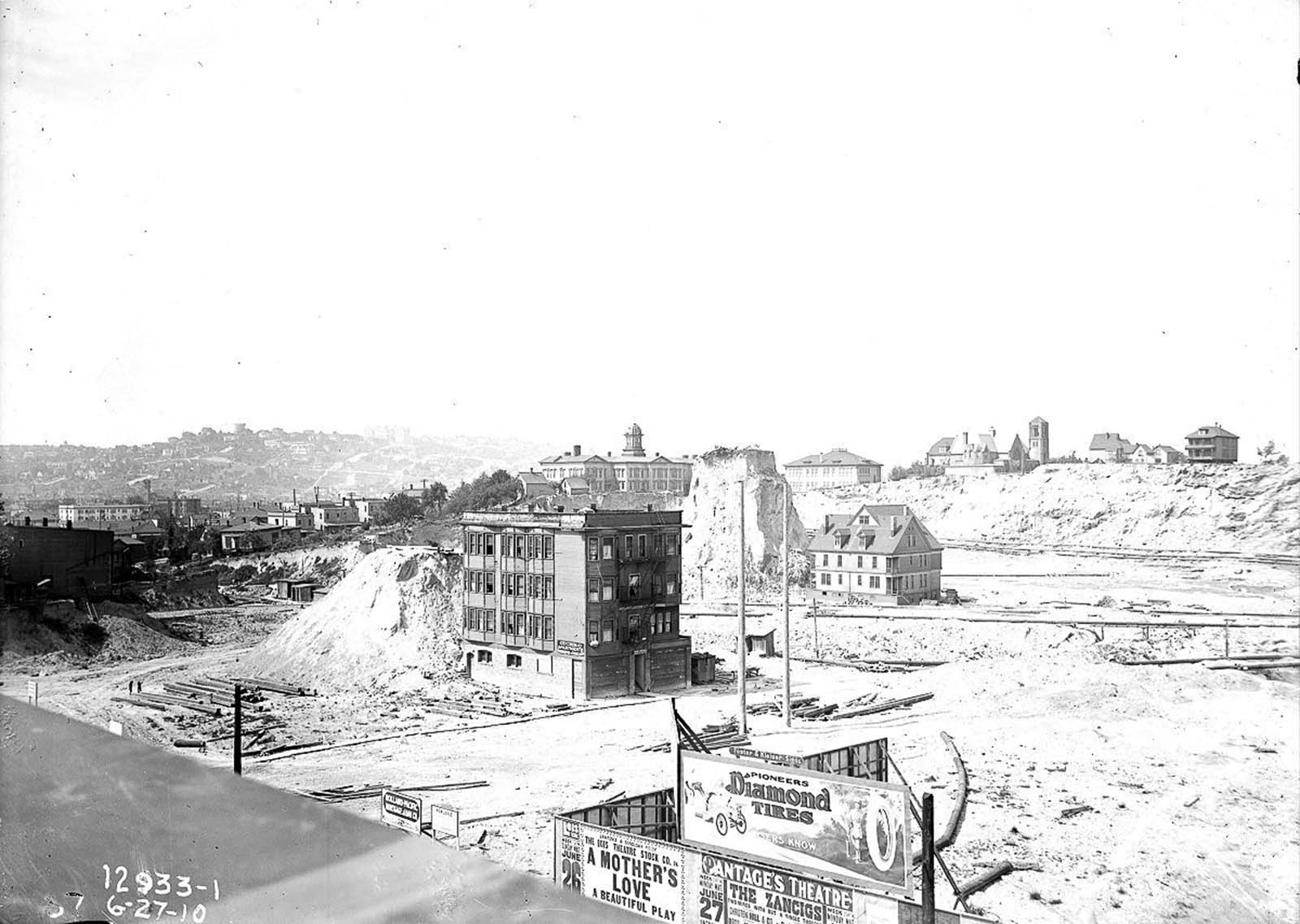 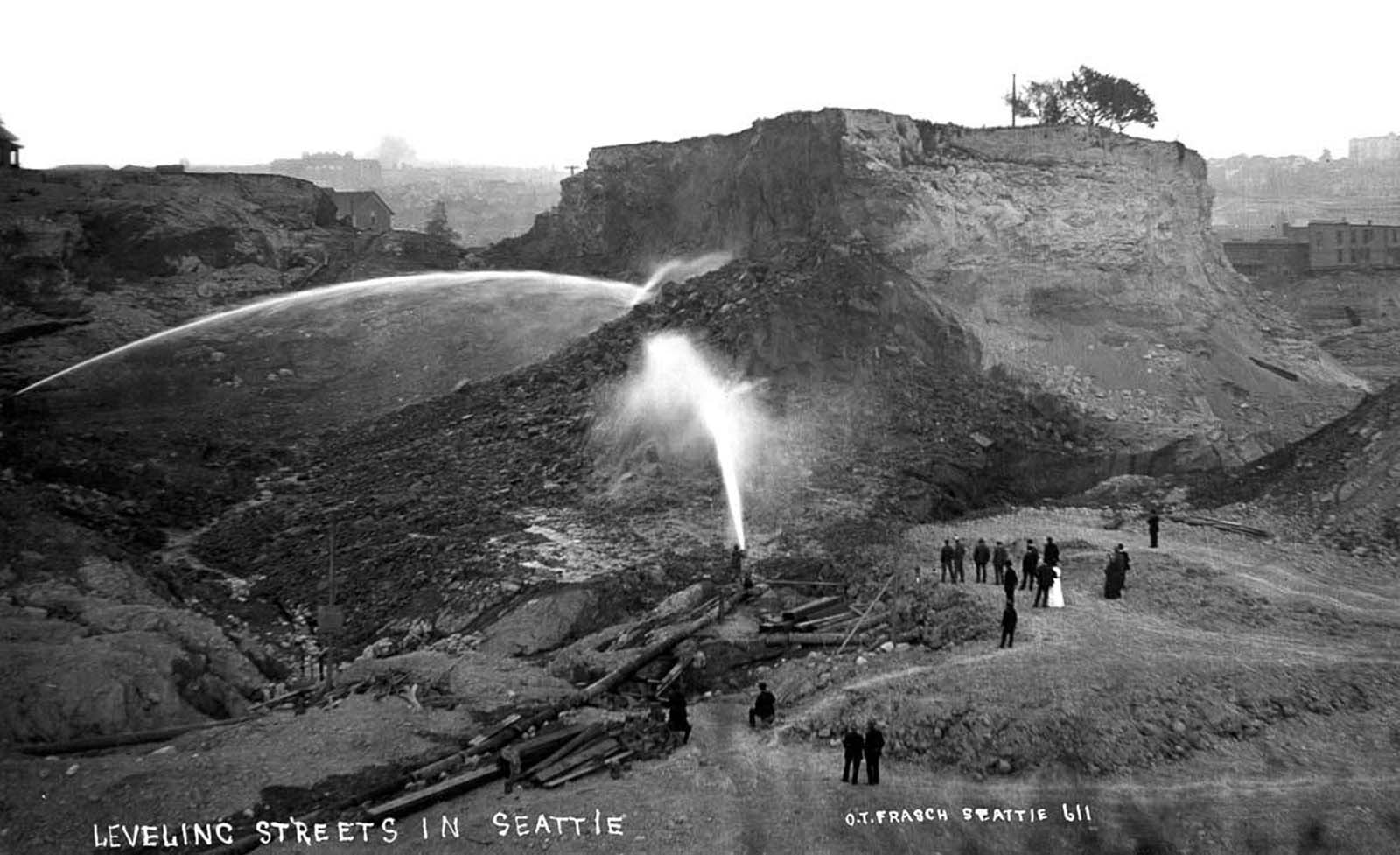 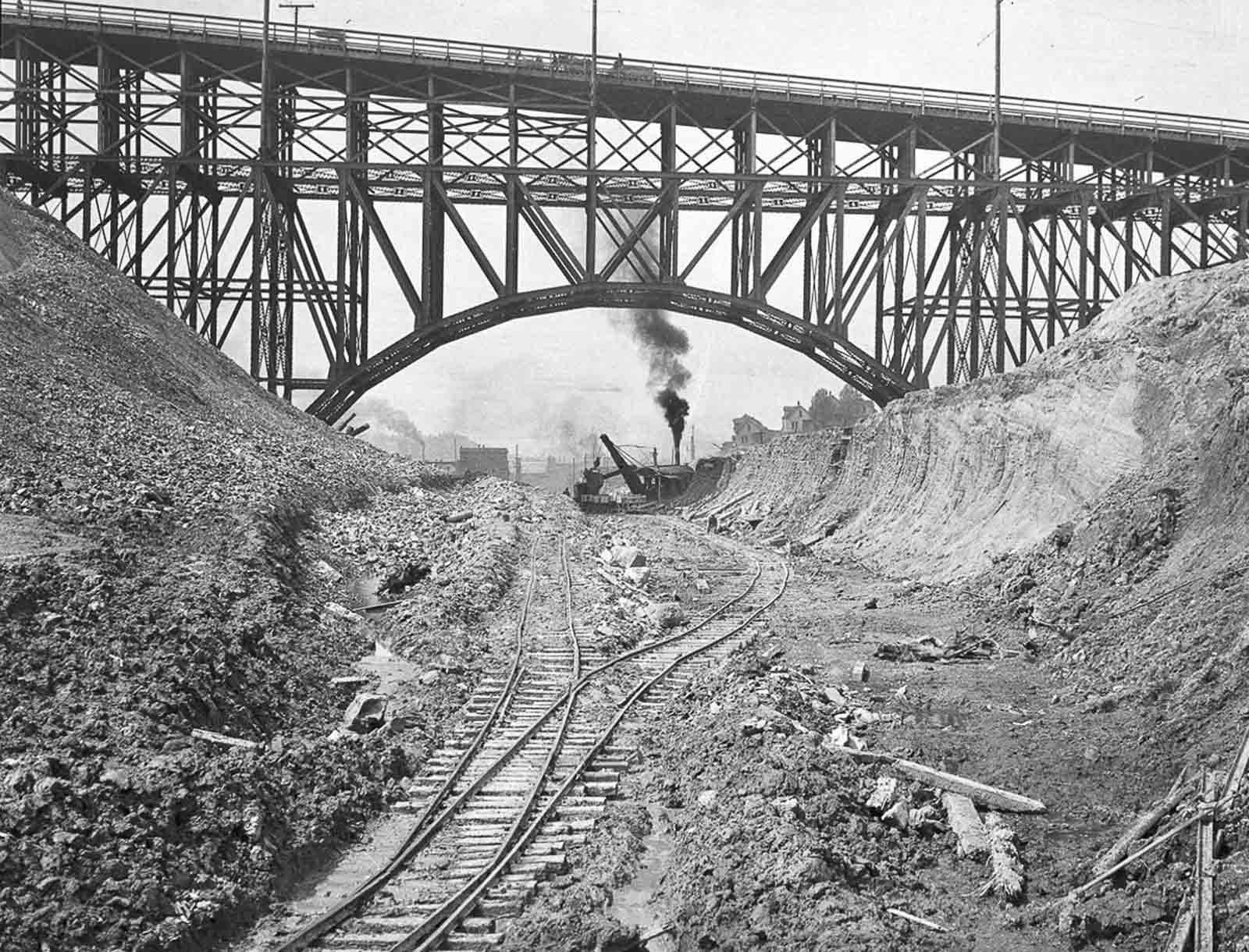 Steam shovels dig near the Jose P. Rizal bridge during the Dearborn regrade. 1912. 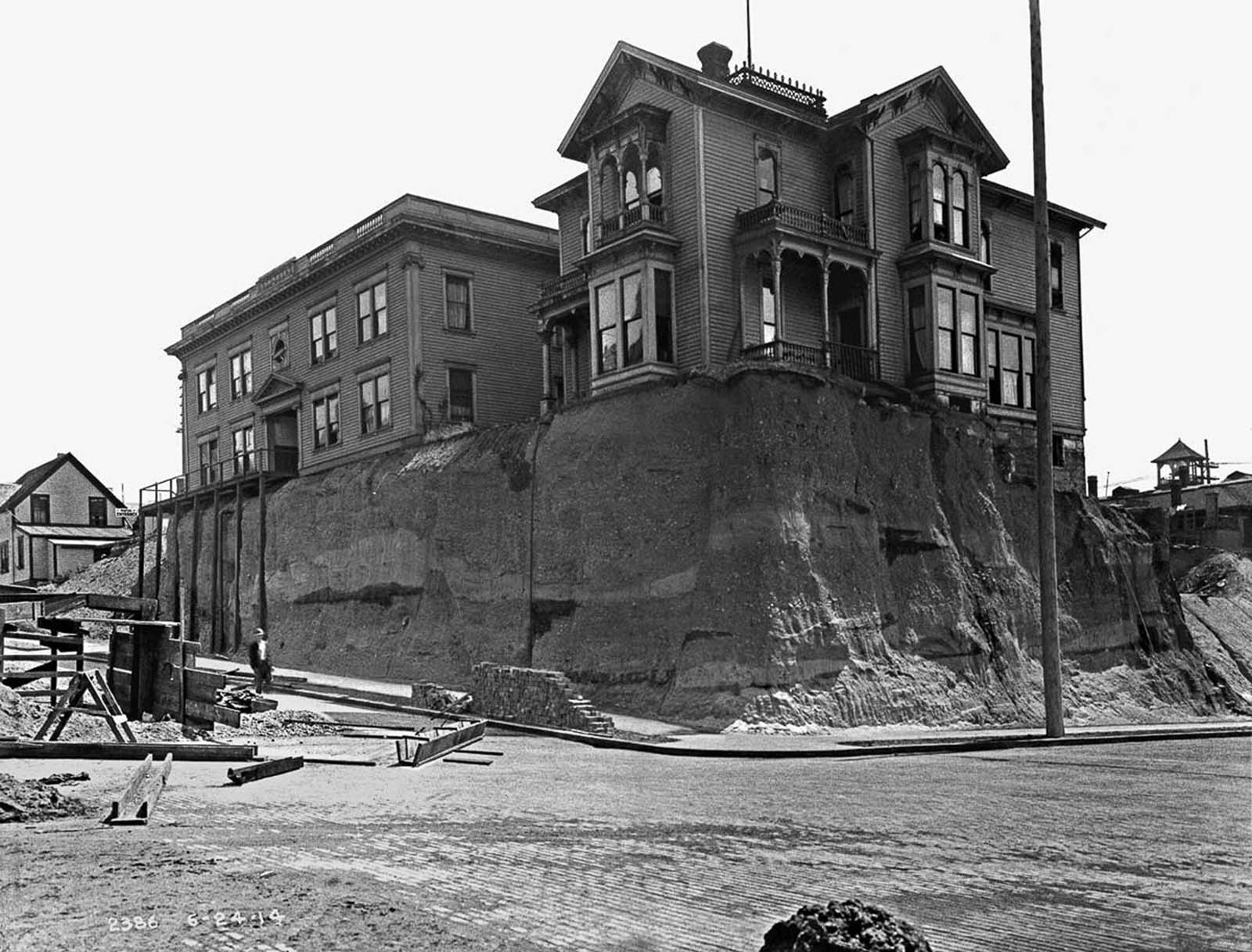 The Ross Shire Hotel on Sixth Avenue and Marion Street. 1914. 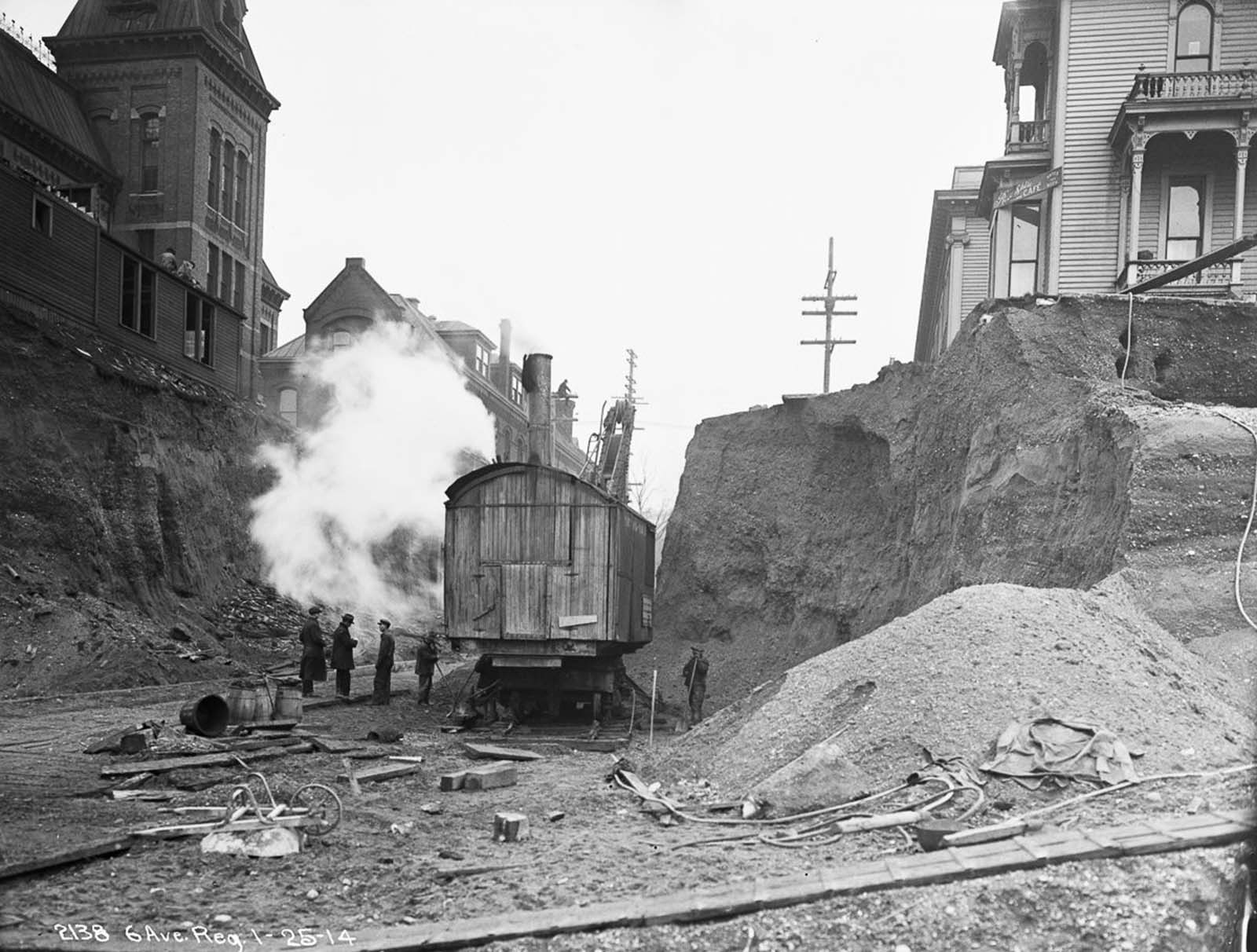 A steam shovel digs on Marion Street during the Sixth Avenue regrade. 1914. 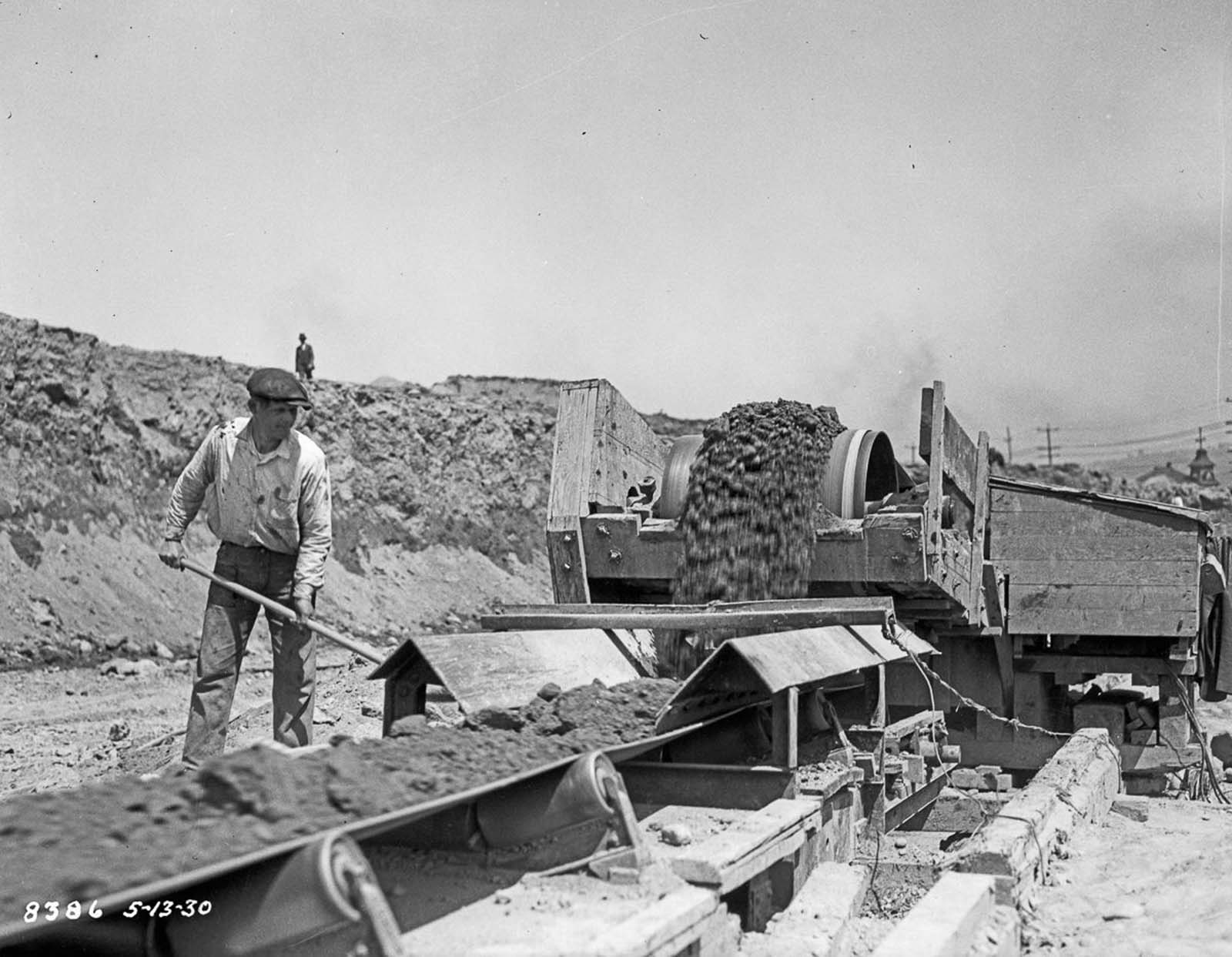 A conveyor belt carries earth from the dig site to the harbor. 1930. 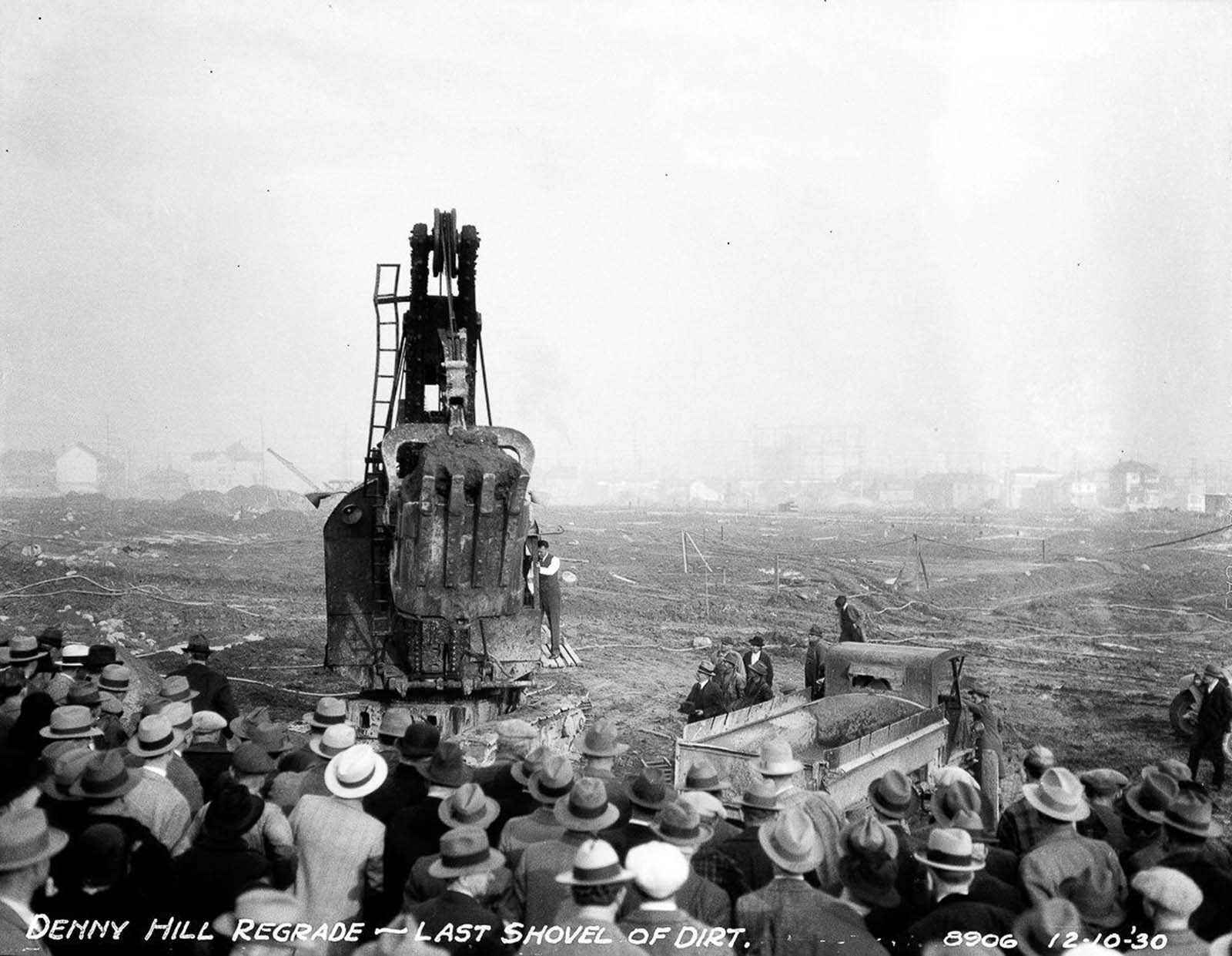 A crowd gathers to witness the last shovel of dirt and the completion of the second Denny regrade. 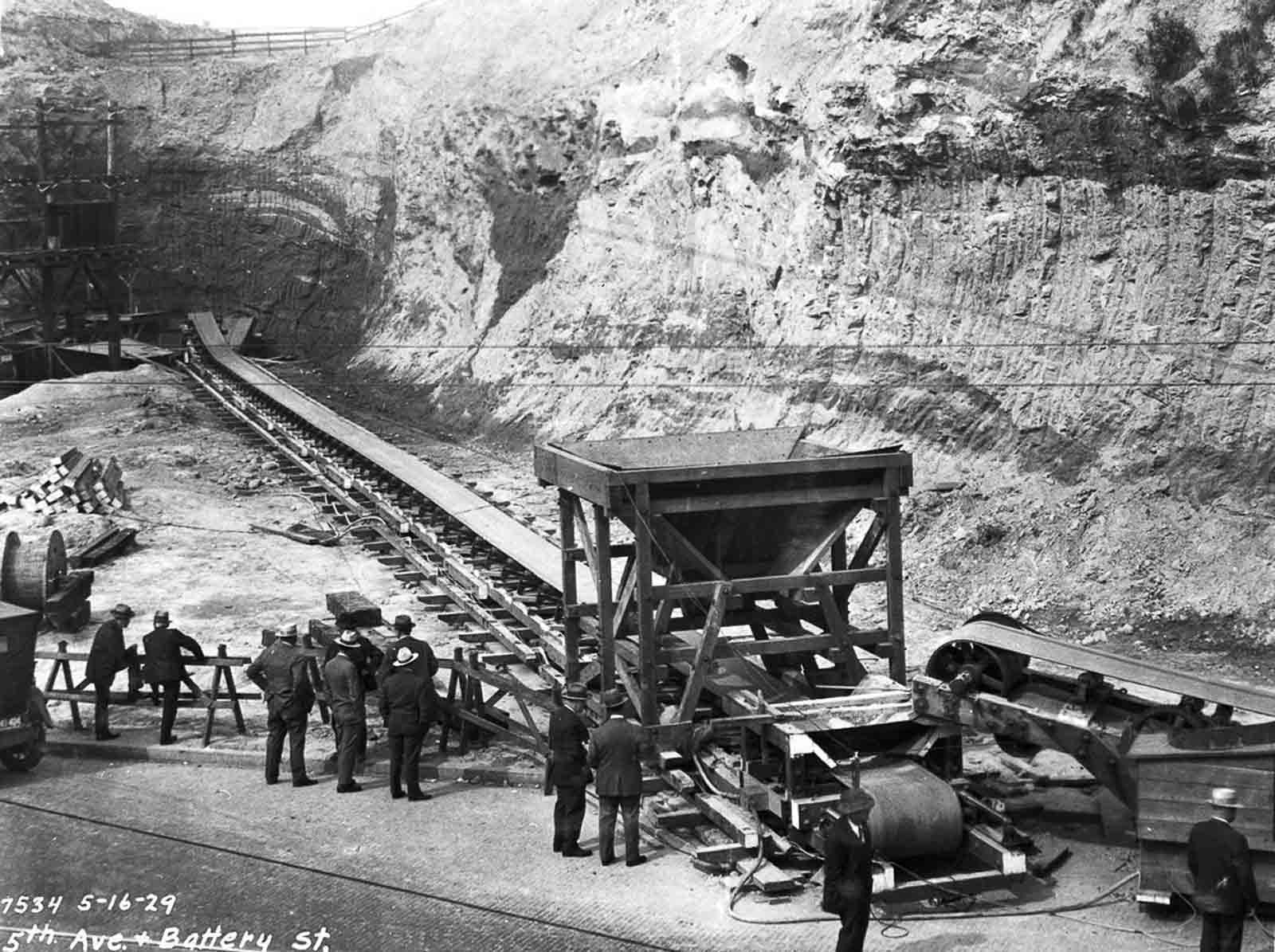 A conveyor belt for moving earth at Fifth Avenue and Battery Street. 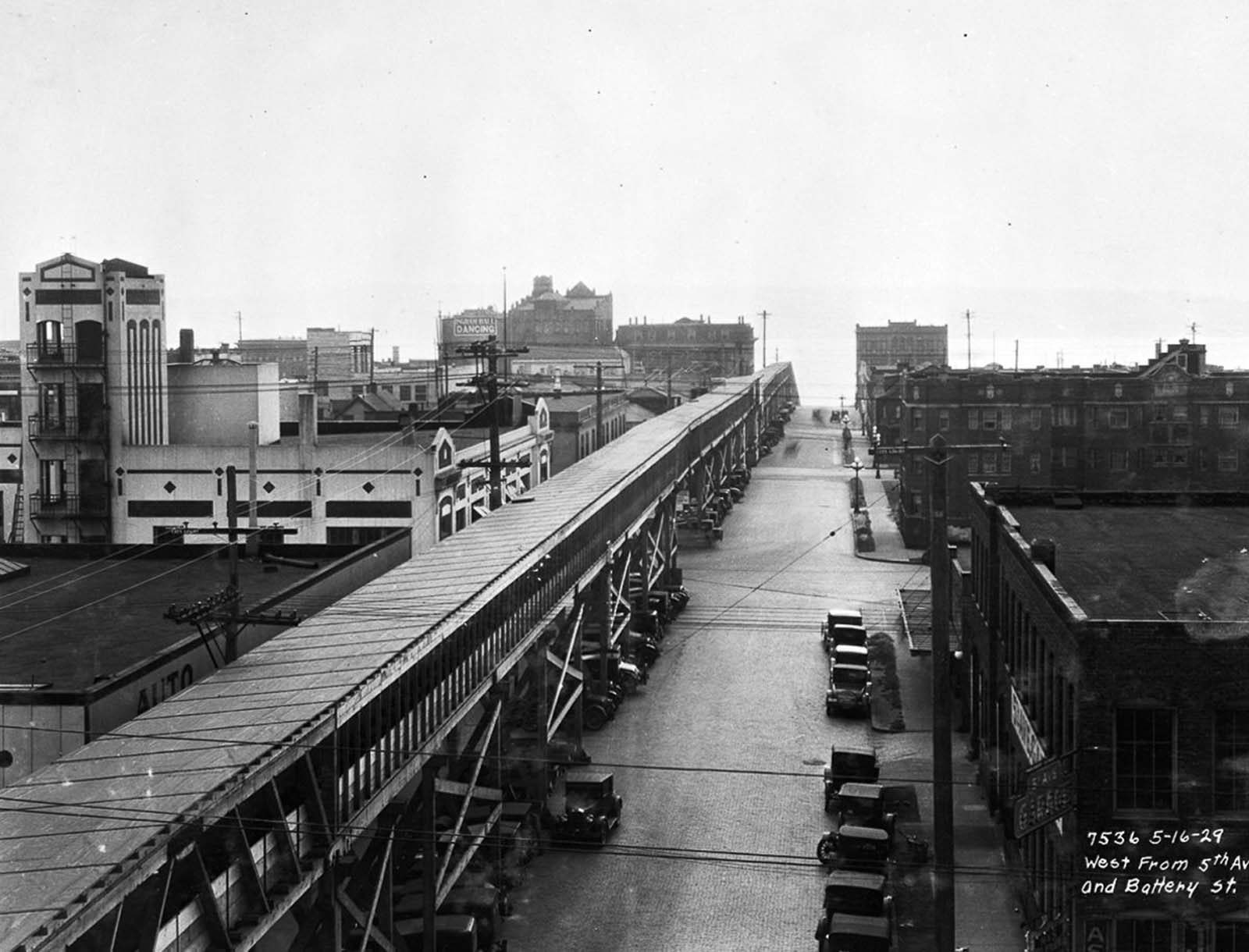 A conveyor belt carries earth from the dig site down Battery Street to the harbor. 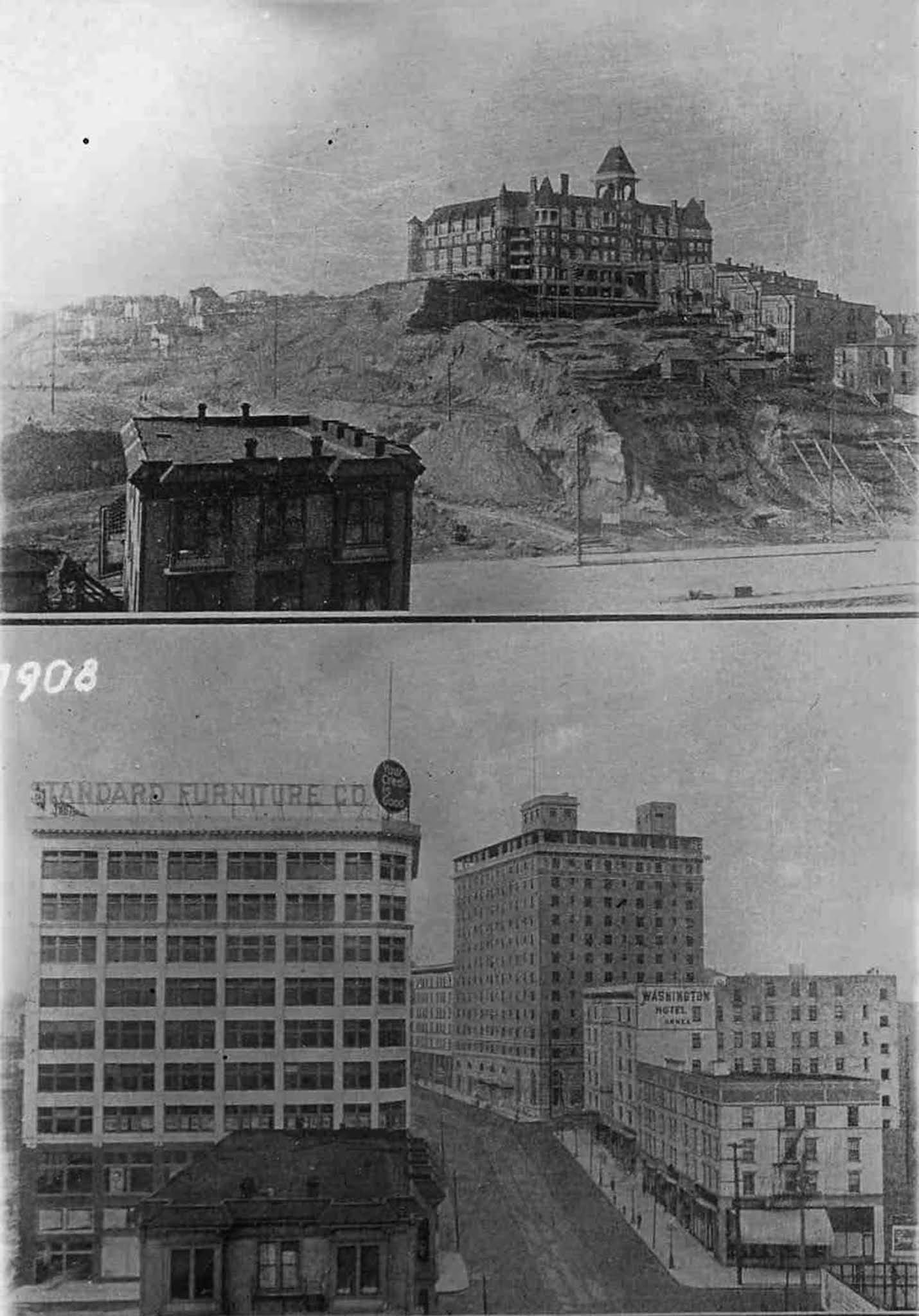 A postcard shows the Washington Hotel atop Denny Hill before Denny Regrade No. 1 and the New Washington Hotel (the dark building in the lower picture, now the Josephinum) built on the newly leveled land. 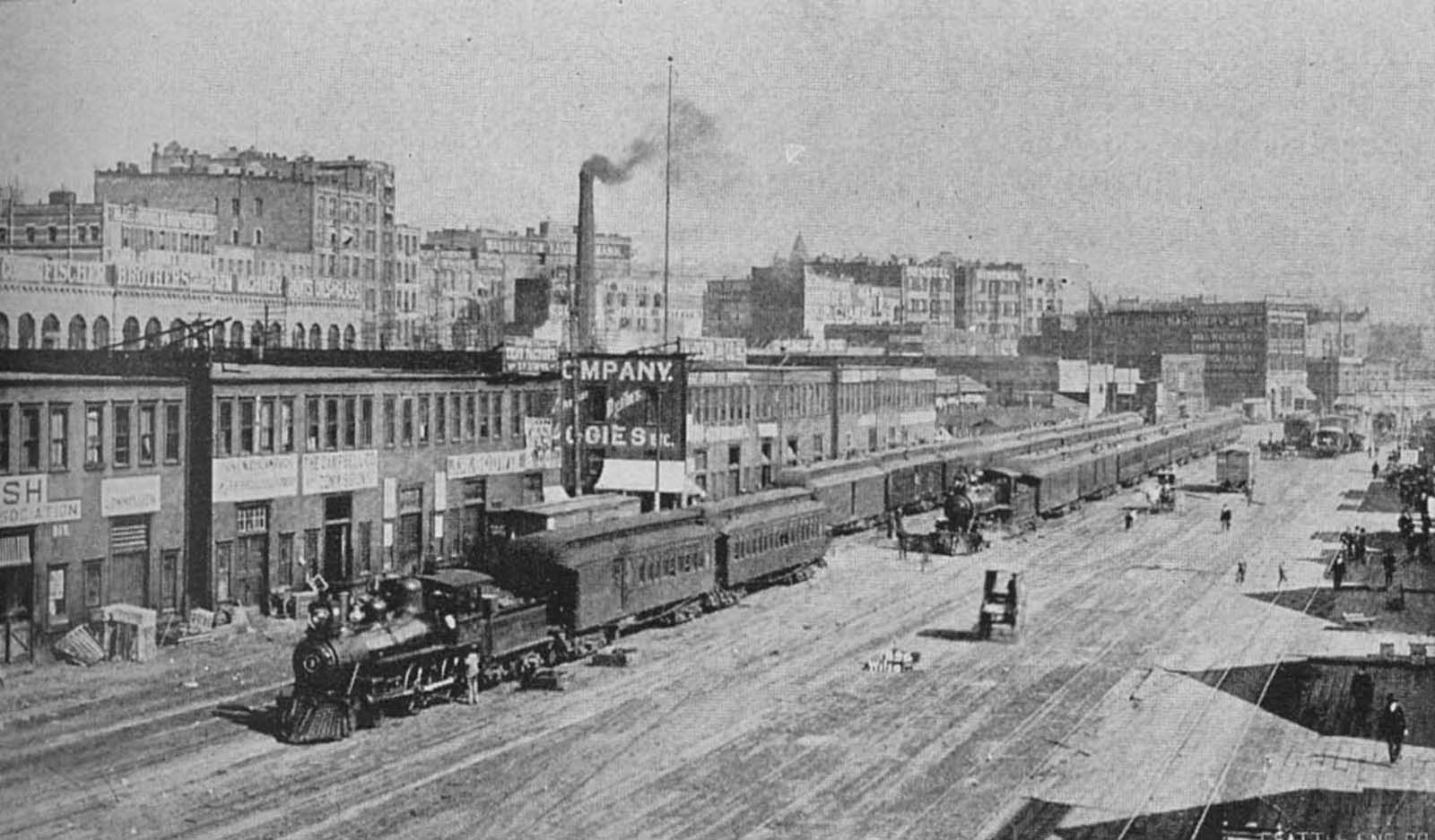 Railroad Avenue, today’s Alaskan Way, depicted here in 1900, was built on fill from the early regrades. To the right in this picture, casting shadows, are the wharves of the Central Waterfront. 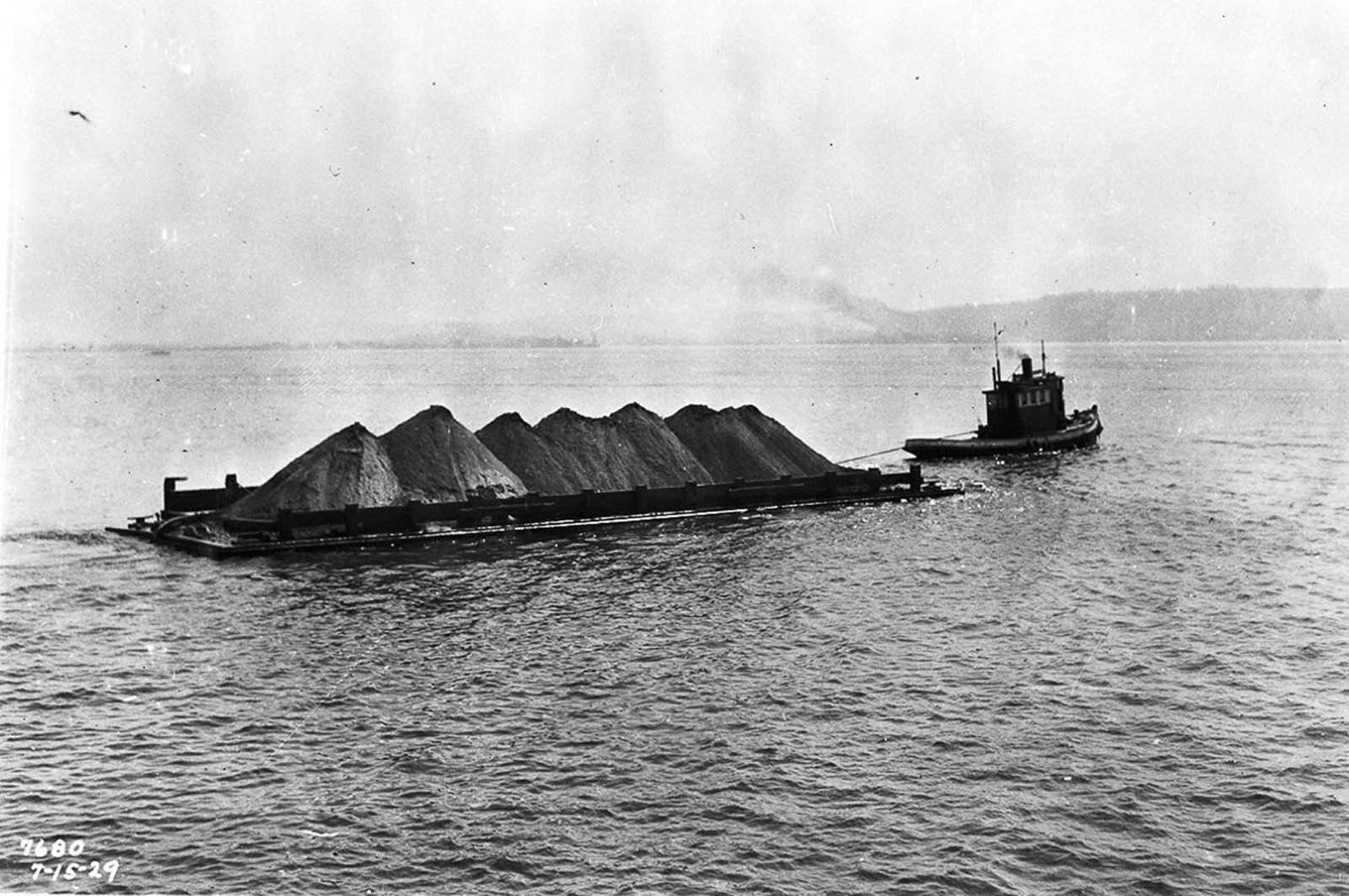 A tugboat tows a skow full of earth out into the harbor. 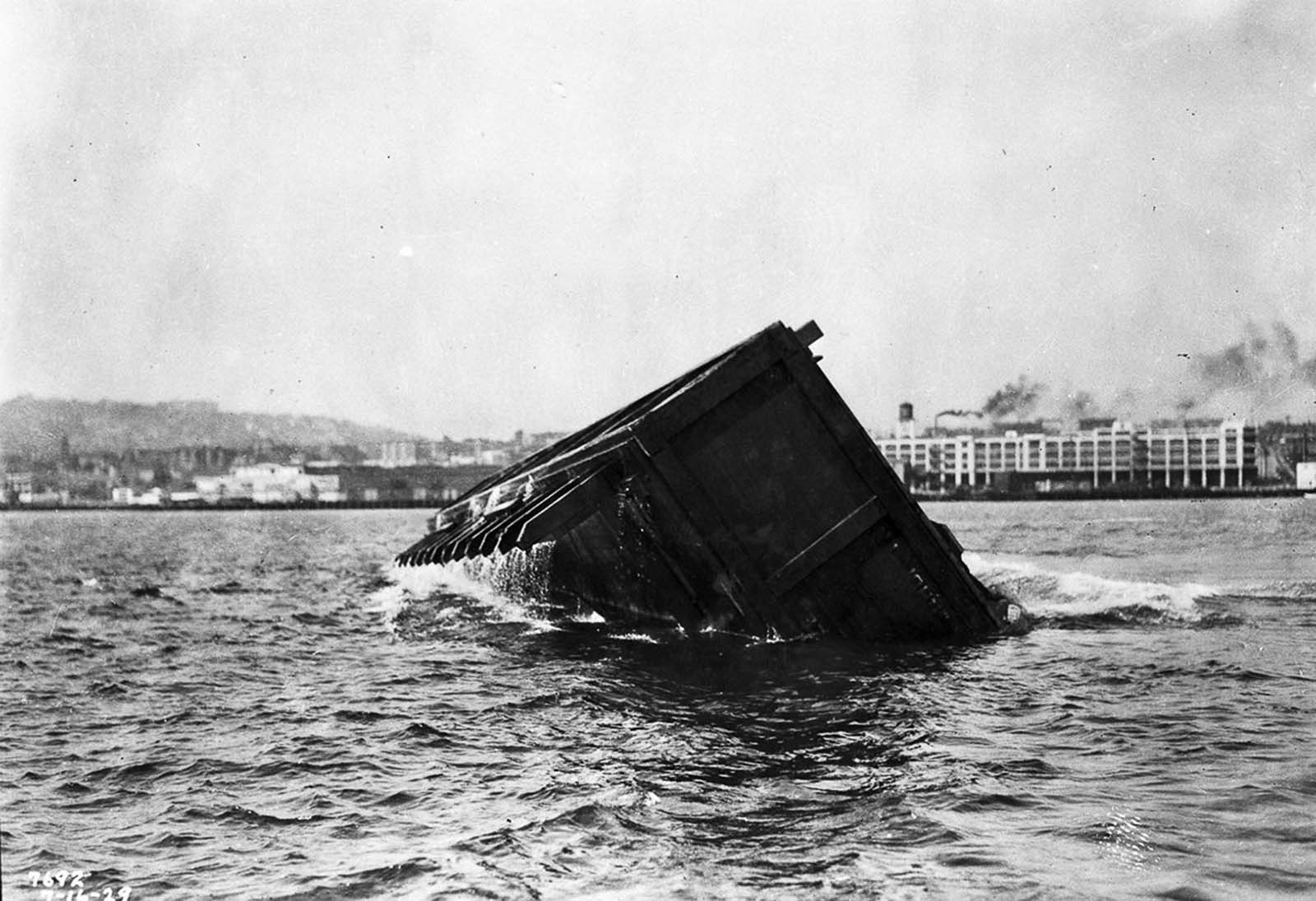 A self-capsizing scow carrying earth dumps its load into the city’s harbor.