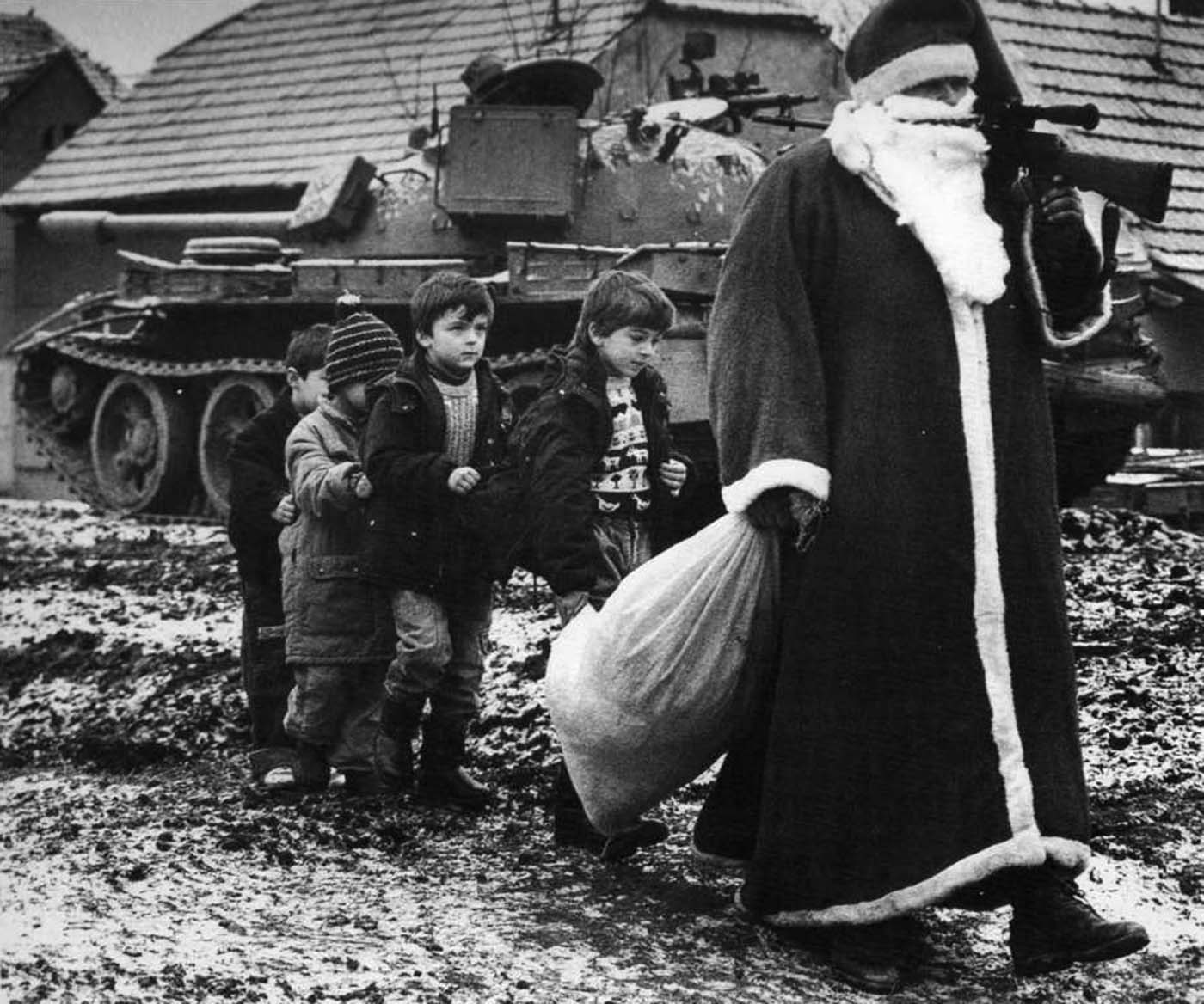 Santa Claus with the children during the Croatian War of Independence. Vukovar, 1992.

The picture was taken in Vukovar in 1992 and the people in the photo are most likely ethnic Serbs. The reason is that Vukovar came under the control of the Yugoslav People’s Army (JNA) back in November of 1991.

At that point, most ethnic Croats fled the city. The tank in the background also points to this fact since the JNA was far better armed than the budding Croatian army.

The Battle of Vukovar was an 87-day siege of Vukovar in eastern Croatia by the Yugoslav People’s Army (JNA), supported by various paramilitary forces from Serbia, between August and November 1991.

Before the Croatian War of Independence, the Baroque town was a prosperous, mixed community of Croats, Serbs, and other ethnic groups. Vukovar was defended by around 1,800 lightly armed soldiers of the Croatian National Guard (ZNG) and civilian volunteers, against as many as 36,000 JNA troops and Serb paramilitaries equipped with heavy armor and artillery.

During the battle, shells and rockets were fired into the town at a rate of up to 12,000 a day. At the time, it was the fiercest and most protracted battle seen in Europe since 1945, and Vukovar was the first major European town to be entirely destroyed since the Second World War.

When Vukovar fell on 18 November 1991, several hundred soldiers and civilians were massacred by Serb forces and at least 20,000 inhabitants were expelled.

Most of Vukovar was ethnically cleansed of its non-Serb population and became part of the self-declared Republic of Serbian Krajina. Several Serb military and political officials, including Milošević, were later indicted and in some cases jailed for war crimes committed during and after the battle.

The battle exhausted the JNA and proved a turning point in the Croatian war. A ceasefire was declared a few weeks later. Vukovar remained in Serb hands until 1998 when it was peacefully reintegrated into Croatia.

It has since been rebuilt but has less than half of its pre-war population and many buildings are still scarred by the battle. Its two principal ethnic communities remain deeply divided and it has not regained its former prosperity.