Reshevsky, at age eight, giving a simultaneous exhibition in France, 1920. He defeated everyone in this picture.

Twenty graybeards sitting in a square played chess in Paris against a very small boy 8 years old, and Samuel Reshevsky beat them all.  According to New York Times: on May 17, 1920, Reshevky faced 20 players in a simul in Paris and the boy “moved quietly from one board to another, reducing their most skillful plans and wiles to nothingness.” Young Samuel — whose head was reported to be “well-shaped, but not abnormal” — had been playing since the age of 5.

As a 9-year old, his first American simultaneous exhibition was with 20 officers and cadets at the Military Academy at West Point. He won 19 games and drew one.

He toured the country and played over 1,500 games as a 9-year old in simultaneous exhibitions and only lost 8 games. In his early years, he did not go to school and his parents ended up in Manhattan Children’s Court on charges of improper guardianship.

Reshevsky never became a truly professional chess player. He gave up competitive chess for seven years, from 1924 to 1931, to complete his secondary education. He graduated from the University of Chicago in 1934 with a degree in accounting and supported himself and his family by working as an accountant.

Reshevsky was a tough and forceful player who was superb at positional play, but could also play brilliant tactical chess when warranted. He often used huge amounts of time in the opening, a dangerous tactic that sometimes forced him to play the rest of the game in a very short amount of time. 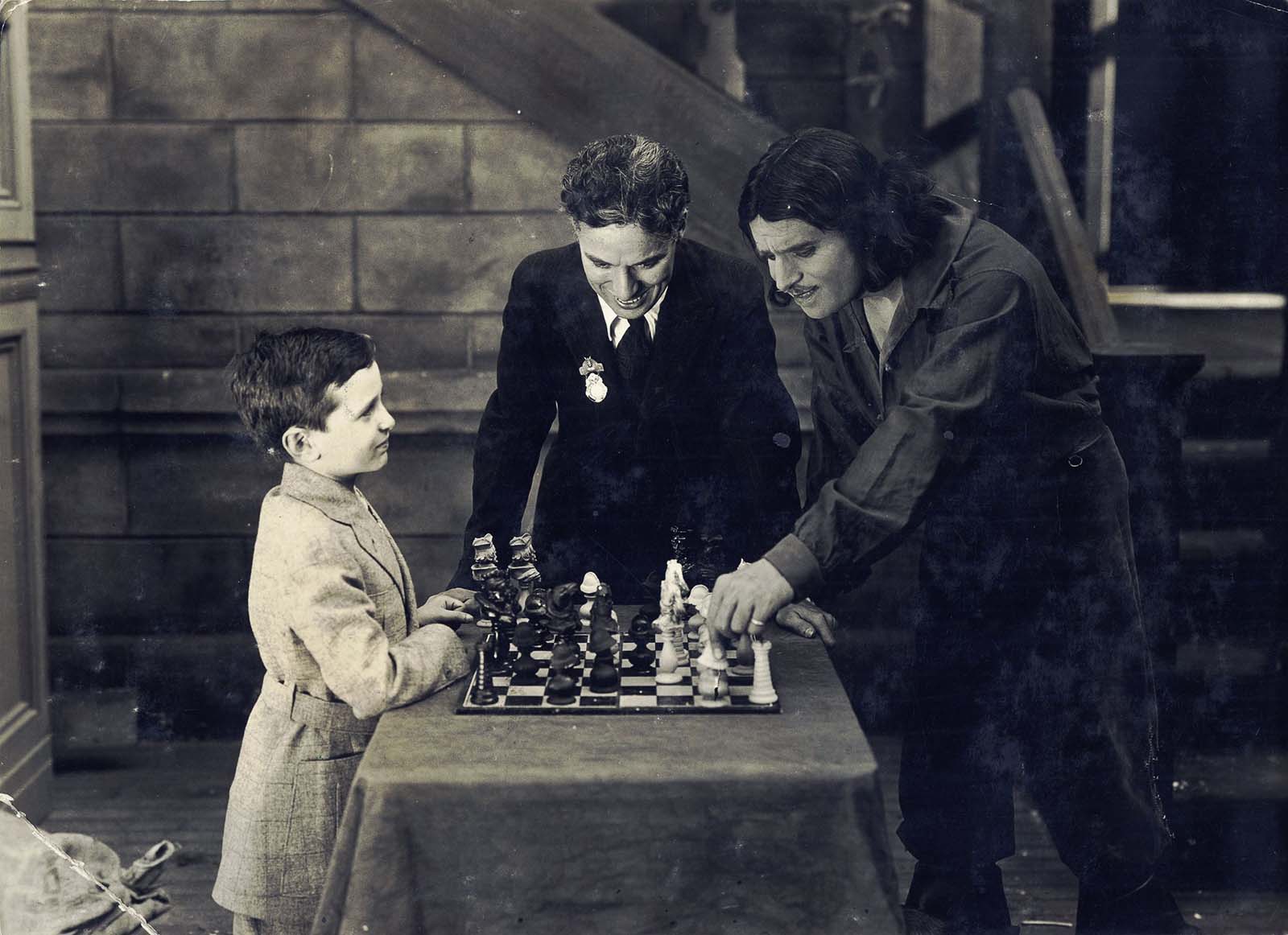 Reshevsky playing chess with Douglas Fairbanks as Charlie Chaplin watches them during the filming of the American silent film The Three Musketeers in 1921.

That sometimes unsettled Reshevsky’s opponents, but at other times resulted in blunders on his part. Reshevsky’s inadequate study of the opening and his related tendency to fall into time-pressure may have been the reasons that, despite his great talent, he never became world champion; he himself acknowledged this in his book on chess upsets.

Reshevsky specialized in closed openings with the white pieces, usually opening with 1.d4, and was a virtuoso with the Exchange Variation of the Queen’s Gambit Declined. He rarely opened with 1.e4 against strong opposition. With the black pieces, he employed a broad and varied repertoire during his long career.

Contemporary American GM Arnold Denker complimented Reshevsky’s extraordinary tenacity and fighting spirit and noted that Reshevsky developed a vital advantage in his great head-to-head battles with his main American rival, GM Reuben Fine, particularly in US Championships from the mid-1930s through the early 1940s. Trouble in games against Reshevsky was the main reason Fine was never able to win the US Championship. 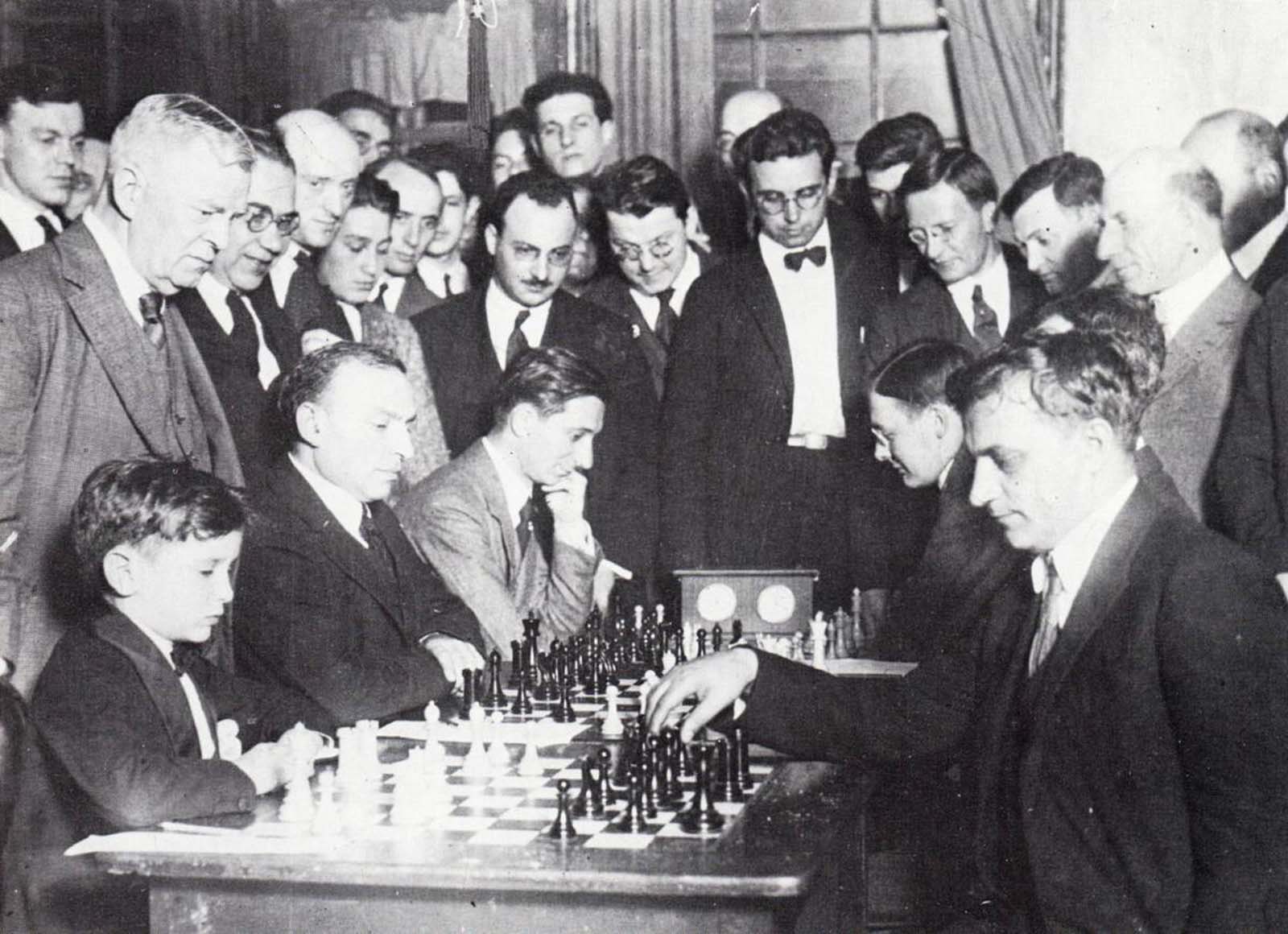 Did Samuel Reshevsky lose to everyone?

This is a common misconception that started as a meme and it ended up becoming a “fact” on the internet. No, Samuel Reshevsky didn’t lose to everyone. Actually, he won all the games played on the simul pictured one the first picture. During his early years, he played around 1,500 games and only lost 8.

The game pictured was played in Paris on May 17, 1920, and Reshevky faced 20 players. The New York Times covered it then and captioned the image as below:

Twenty graybeards sitting in a square played chess yesterday in Paris against a very small boy 8 years old, and he beat them all. Among the graybeards were some of the best players in France, and one at least, whose boast it is that he drew with Capablanca, the Pan-American chess champion, but all their reputation availed them nothing against a frail child with a pale, thoughtful face who moved quietly from one board to another, reducing their most skillful plans and wiles to nothingness and mating them and mating them when they least expected it. 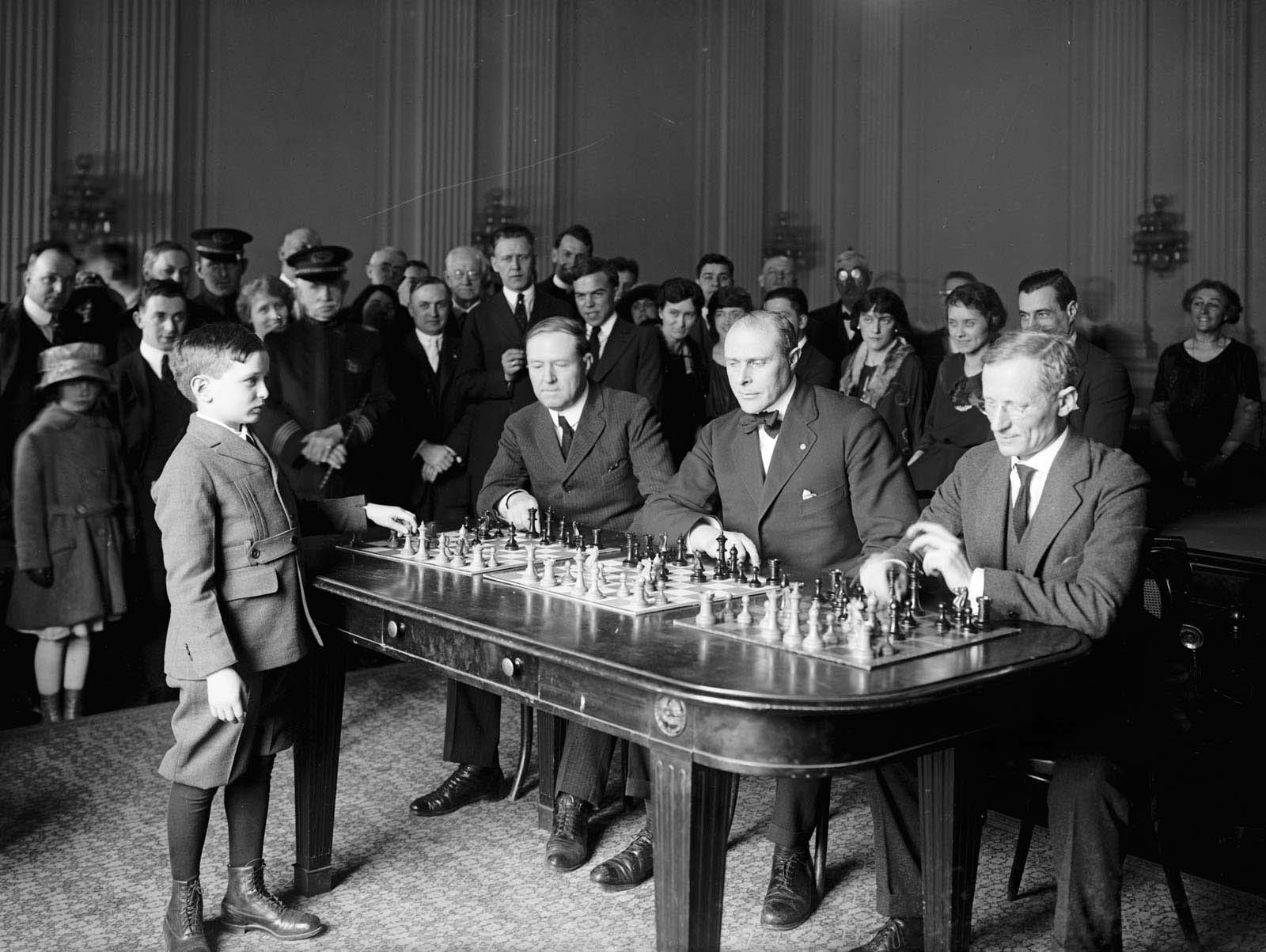 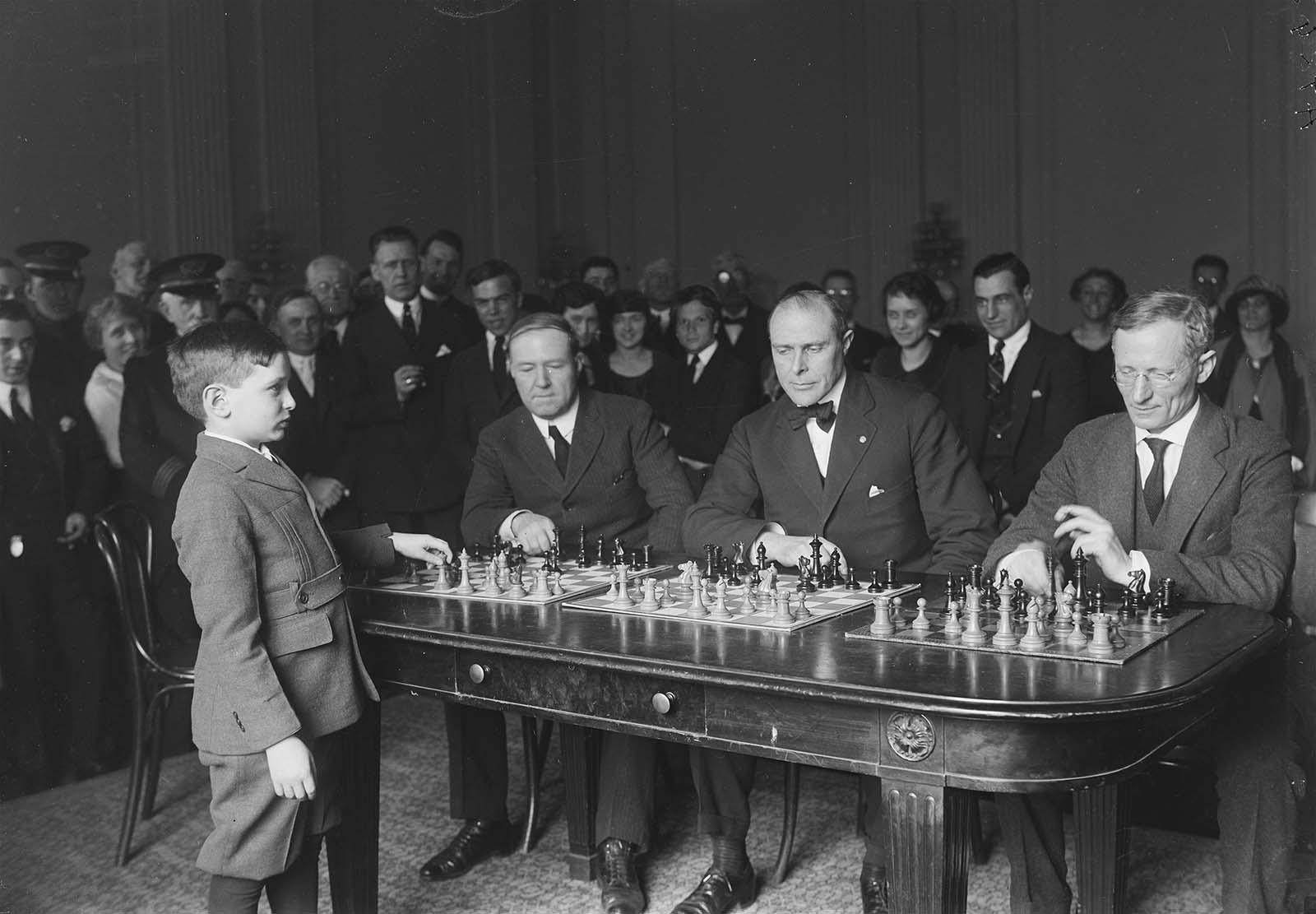 Once Bobby Fischer made his debut at age 14 in the US Championship with the 1957–58 event, he dominated completely, winning on each of his eight attempts, leaving Reshevsky, the seven-time former champion, back in the chasing pack.

There was little love lost between the two players, separated by a generation in age. Ahead of the Buenos Aires 1960 tournament, Reshevsky reportedly said, “I would settle for 19th place – if Fischer placed 20th.”

Reshevsky in fact won the Buenos Aires 1960 tournament, with Fischer well back; this was the only time Reshevsky finished ahead of Fischer in an international tournament.

In 1961 Reshevsky began a 16-game match with the then-current US Champion Fischer; it was jointly staged in New York and Los Angeles. Despite Fischer’s recent meteoric rise, consensus opinion favored Reshevsky.

After eleven games and a tie score (two wins apiece with seven draws), the match ended due to a scheduling dispute between Fischer and match organizer Jacqueline Piatigorsky, with Reshevsky receiving the winner’s share of the prize fund.

In the 1967 Sousse Interzonal, Fischer turned up 53 minutes late (only seven minutes short of an automatic time forfeiture) for his game with Reshevsky, and made his opening move without a word of apology.

Reshevsky, who had been convinced that Fischer had withdrawn from the tournament, lost the game badly and complained furiously to the organizers. 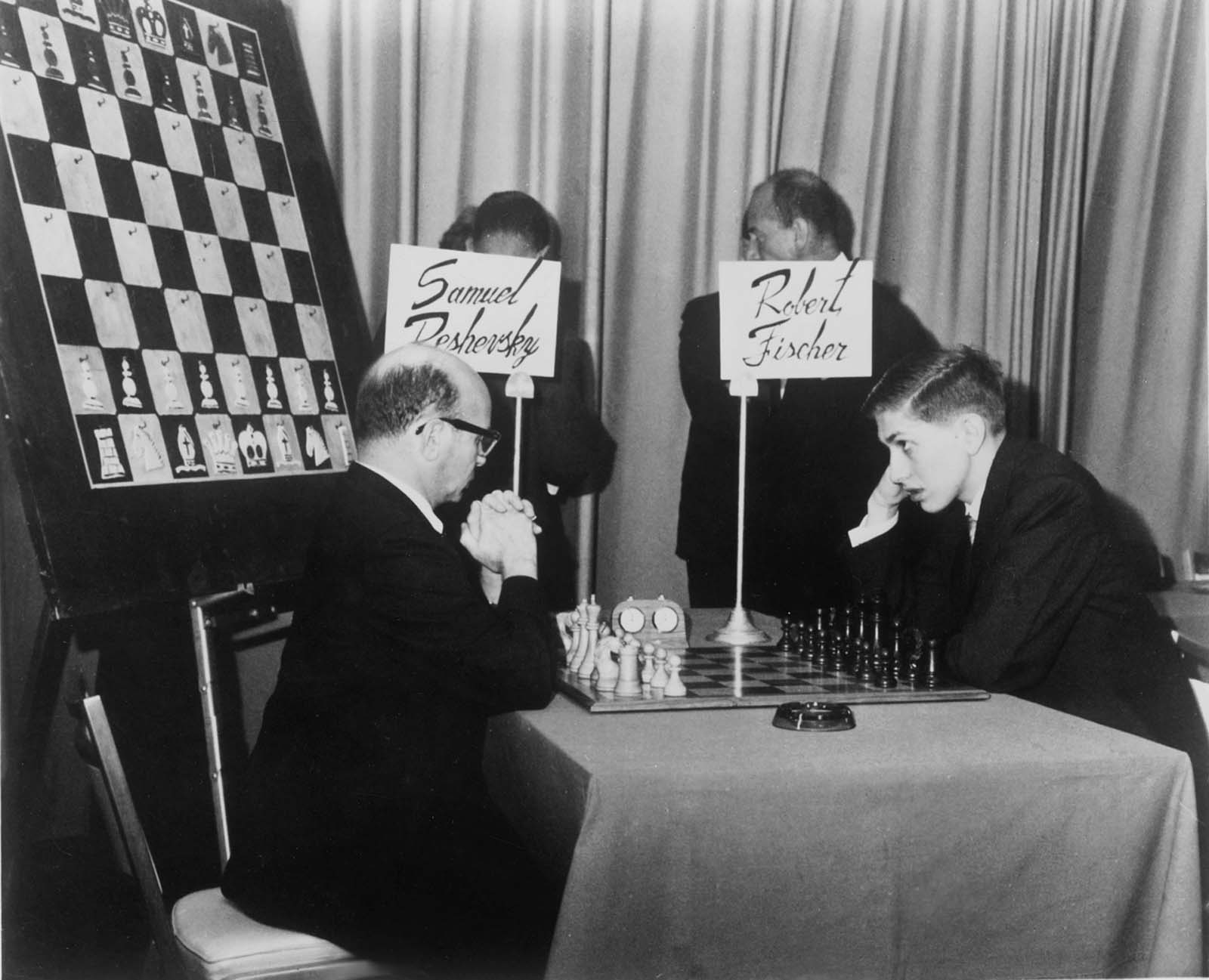 Samuel Reshevsky and Bobby Fischer at their 1961 Match.

Despite losing that game, Reshevsky advanced to the next stage. Reshevsky also refused to play for the US team in the Chess Olympiads of 1960, 1962, and 1966 because Fischer, as US champion, was chosen ahead of him for the top board. He did, however, finally consented to play on a lower board in 1970, the only time the two men appeared in the same team.

Although Reshevsky and Fischer had one of the fiercest rivalries in chess history, Fischer greatly respected the older champion, stating in the late 1960s that he thought Reshevsky was the strongest player in the world in the mid-1950s.

This was around the time when Reshevsky defeated World Champion Mikhail Botvinnik in their four-game mini-match, which was the top board of the US vs. USSR team match held in Moscow.

It was only in 1968, in his 57th year, that he finally lost a match where he had time for extensive preparation. This was against Viktor Korchnoi in Amsterdam in the first round of the Candidates.

The match was scheduled for ten games but the younger grandmaster proved too much for Reshevsky, who did not win a game and lost by the final score of 5½–2½. 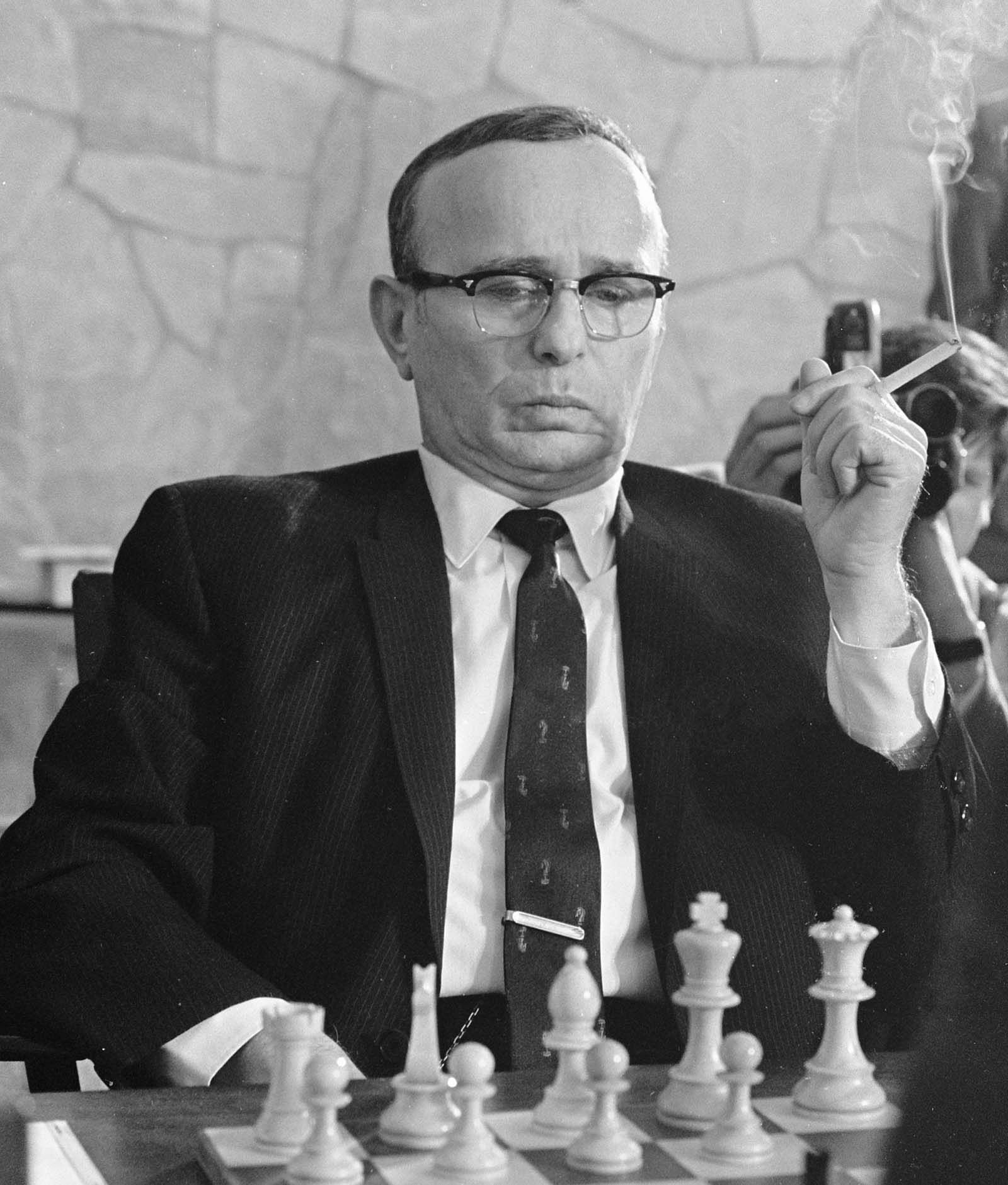 During his long chess career, Reshevsky played eleven of the first twelve world champions, from Emanuel Lasker to Anatoly Karpov, the only player to do so (he met Garry Kasparov but never played him).