Antonio Gaudí started work designing a building in 1883 he originally termed the “church of the poor”. After disagreements between the founding association and the original architect, Gaudí was assigned to lead the project in 1884, and thus produced an entirely new design.

Already a famous architect for his unique designs in Barcelona, Gaudí had in mind something spectacular, which he would eventually achieve. In his later years, he abandoned all secular work and devoted his life to the basilica called La Sagrada Família, or the “Holy Family”.

He worked on the project for over 40 years, devoting the last 15 years of his life entirely to this endeavor. When questioned about the extremely long duration of construction, Gaudí is said to have joked, “My client is not in a hurry.”

The original design for the project for the Sagrada Família by diocesan architect Francisco de Paula del Villar following the prevailing guidelines of the time, with neo-Gothic elements.

Together with other artists, he supervised the work until his death on June 7, 1926, when the eminent architect was run over by a city tram. Because of his ragged attire and empty pockets, several can drivers refused to pick him up for fear that he would be unable to pay the fare.

He was eventually taken to a pauper’s hospital in Barcelona. Nobody recognized the injured Gaudí until some friend located him the next day.

When they tried to move him into a better hospital, Gaudí refused, reportedly saying, “I belong here among the poor.” He died two days later and was buried in the crypt underneath his unfinished masterpiece, Sagrada Família. 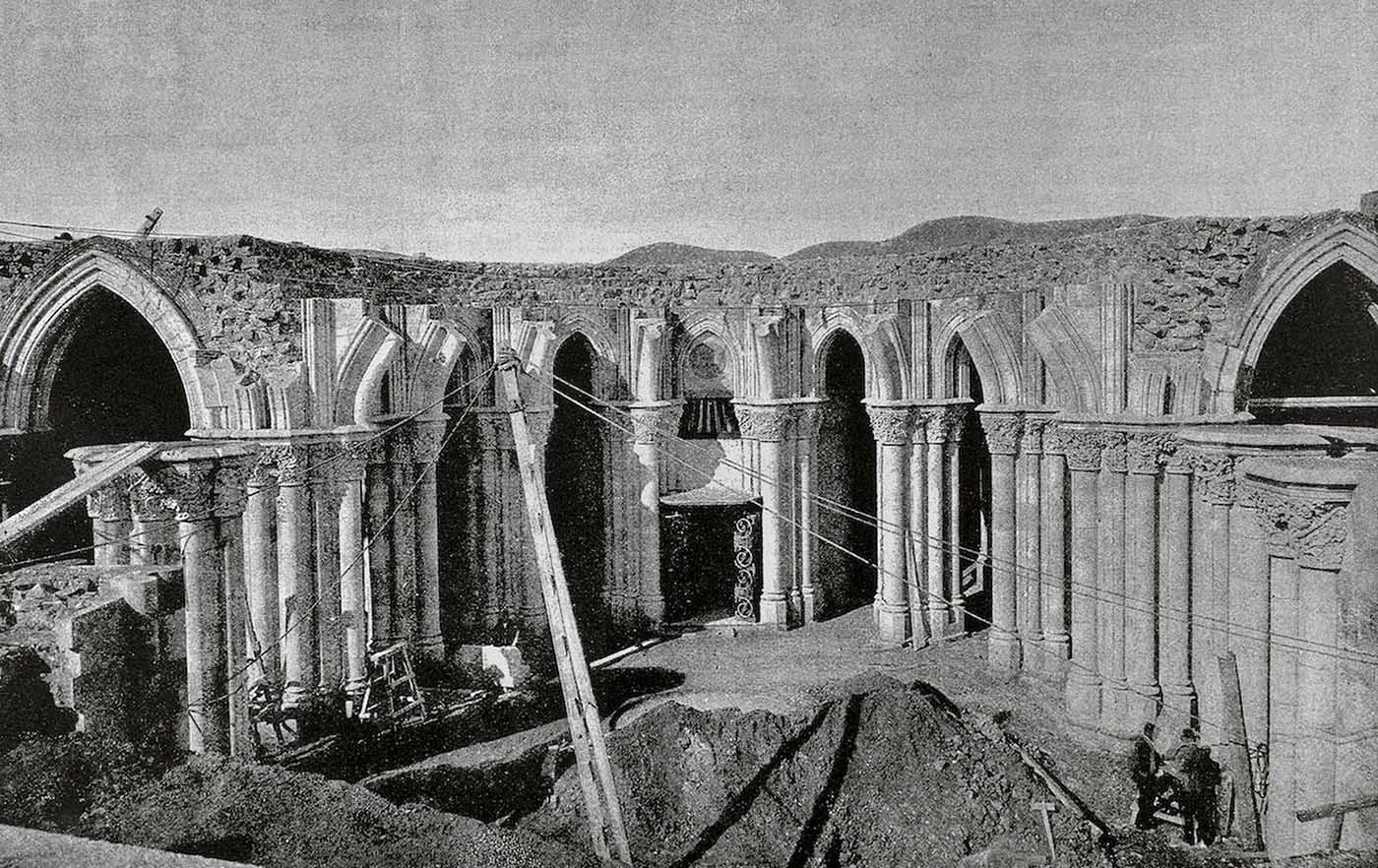 The church was originally conceived by Josep Maria Bocabella, the founder of the spiritual Association of Devotees of Saint Joseph, and his desire to promote Catholic values at a time of social and religious instability in Spain.

Antonio Gaudí met this objective by designing a church dedicated to the Holy Family. He wanted Sagrada Família to establish e religious bond between the ordinary people and God. Every detail, from the colors used to the rich sculptures, all contain deep religious symbolism.

As for conceptualizing the church, he originally got his inspiration from neighboring Montserrat, the famous pilgrimage destination atop a craggy peak. The three façades at the church represent birth, death, and resurrection.

Every part of the design is rich with mystic Christian symbolism, as Gaudí intended the church to be the “last great sanctuary of Christendom”.

Perhaps the most striking aspects are the spindle-shaped towers. A total of 18 tall towers are featured in the finished design, representing in ascending order of height the 12 Apostles, the four Evangelists, the Virgin Mary, and – tallest of all -Jesus Christ.

The Sagrada Família’s construction progressed slowly and was interrupted by the Spanish Civil War. In July 1936, revolutionaries set fire to the crypt and broke their way into the workshop, partially destroying Gaudí’s original plans, drawings, and plaster models, which led to 16 years of work to piece together the fragments of the master model.

Sagrada Família is still under construction and will remain that for quite some time. The enormous structure must be financed entirely by personal donations as required in the original concept. The ongoing construction of Sagrada Família is paid for almost exclusively by millions of people who visit each year.

The Design Concepts of Sagrada Família

The Church will have three grand façades: the Nativity façade to the East, the Passion façade to the West, and the Glory façade to the South (yet to be completed). The Nativity Façade was built before work was interrupted in 1935 and bears the most direct Gaudí influence.

The Passion façade was built according to the design that Gaudí created in 1917. The construction began in 1954, and the steeples, built over the elliptical plan, were finished in 1976.

It is especially striking for its spare, gaunt, tormented characters, including emaciated figures of Christ being scourged at the pillar; and Christ on the Cross. These controversial designs are the work of Josep Maria Subirachs.

The Glory façade, on which construction began in 2002, will be the largest and most monumental of the three and will represent one’s ascension to God. It will also depict various scenes such as Hell, Purgatory, and will include elements such as the Seven deadly sins and the Seven heavenly virtues.

Themes throughout the decoration include words from the liturgy. The steeples are decorated with words such as “Hosanna”, “Excelsis”, and “Sanctus”; the great doors of the Passion façade reproduce excerpts of the Passion of Jesus from the New Testament in various languages, mainly Catalan.

The Glory façade is to be decorated with the words from the Apostles’ Creed, while its main door reproduces the entire Lord’s Prayer in Catalan, surrounded by multiple variations of “Give us this day our daily bread” in other languages.

The three entrances symbolize the three virtues: Faith, Hope, and Love. Each of them is also dedicated to a part of Christ’s life. The Nativity Façade is dedicated to his birth; it also has a cypress tree which symbolizes the tree of life.

The Glory façade is dedicated to his glory period. The Passion façade is symbolic of his suffering. The apse steeple bears the Latin text of Hail Mary. All in all, the Sagrada Família is symbolic of the lifetime of Christ.

The art historian Nikolaus Pevsner, writing in the 1960s, referred to Gaudí’s buildings as growing “like sugar loaves and anthills” and describes the ornamenting of buildings with shards of broken pottery as possibly “bad taste” but handled with vitality and “ruthless audacity”.

The building’s design itself has been polarizing. Assessments by Gaudí’s fellow architects were generally positive; Louis Sullivan greatly admired it, describing Sagrada Família as the “greatest piece of creative architecture in the last twenty-five years. It is spirit symbolized in stone!” 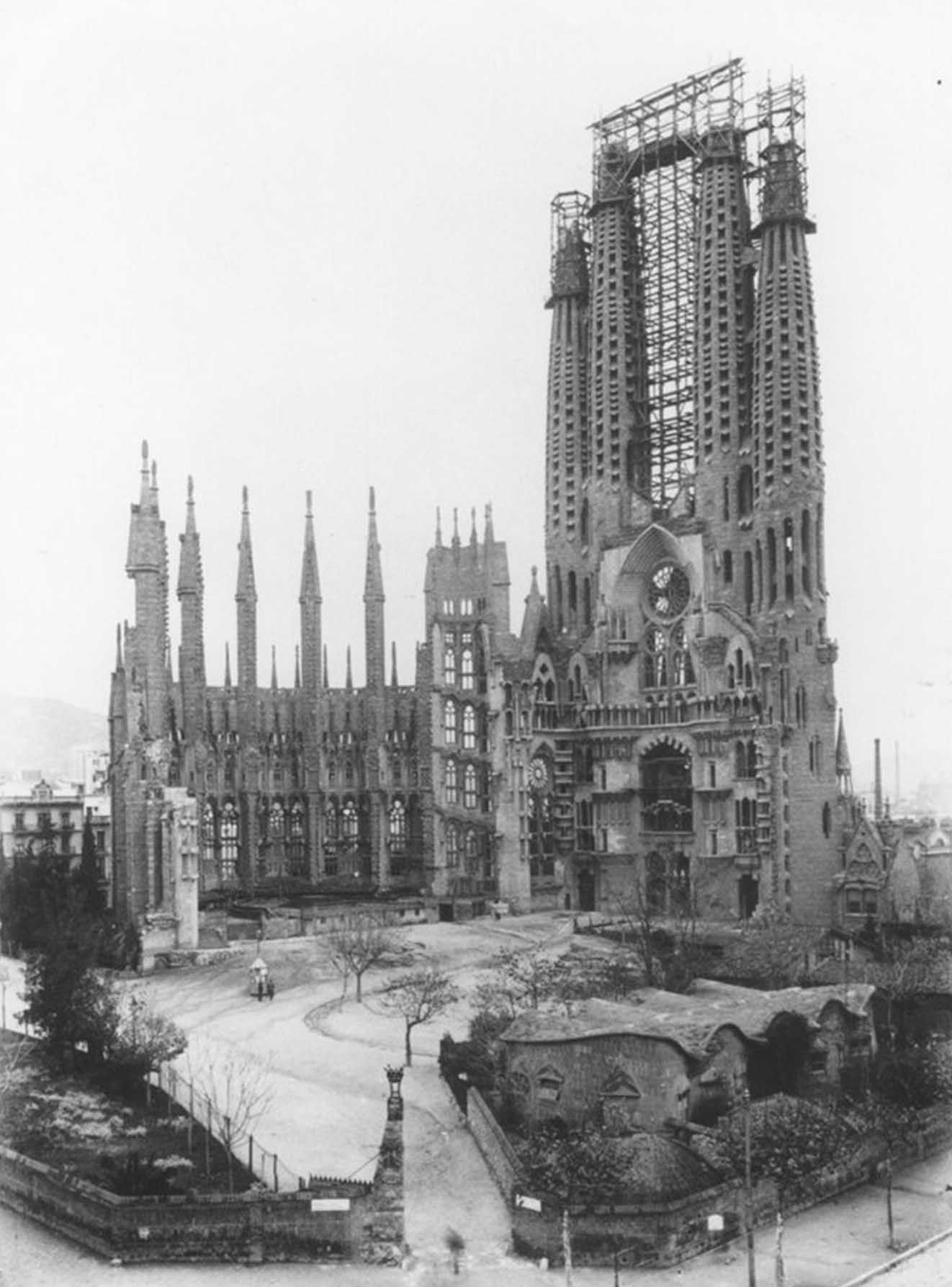 The bell tower dedicated to the apostle Barnabas was the only one Gaudí would see finished. 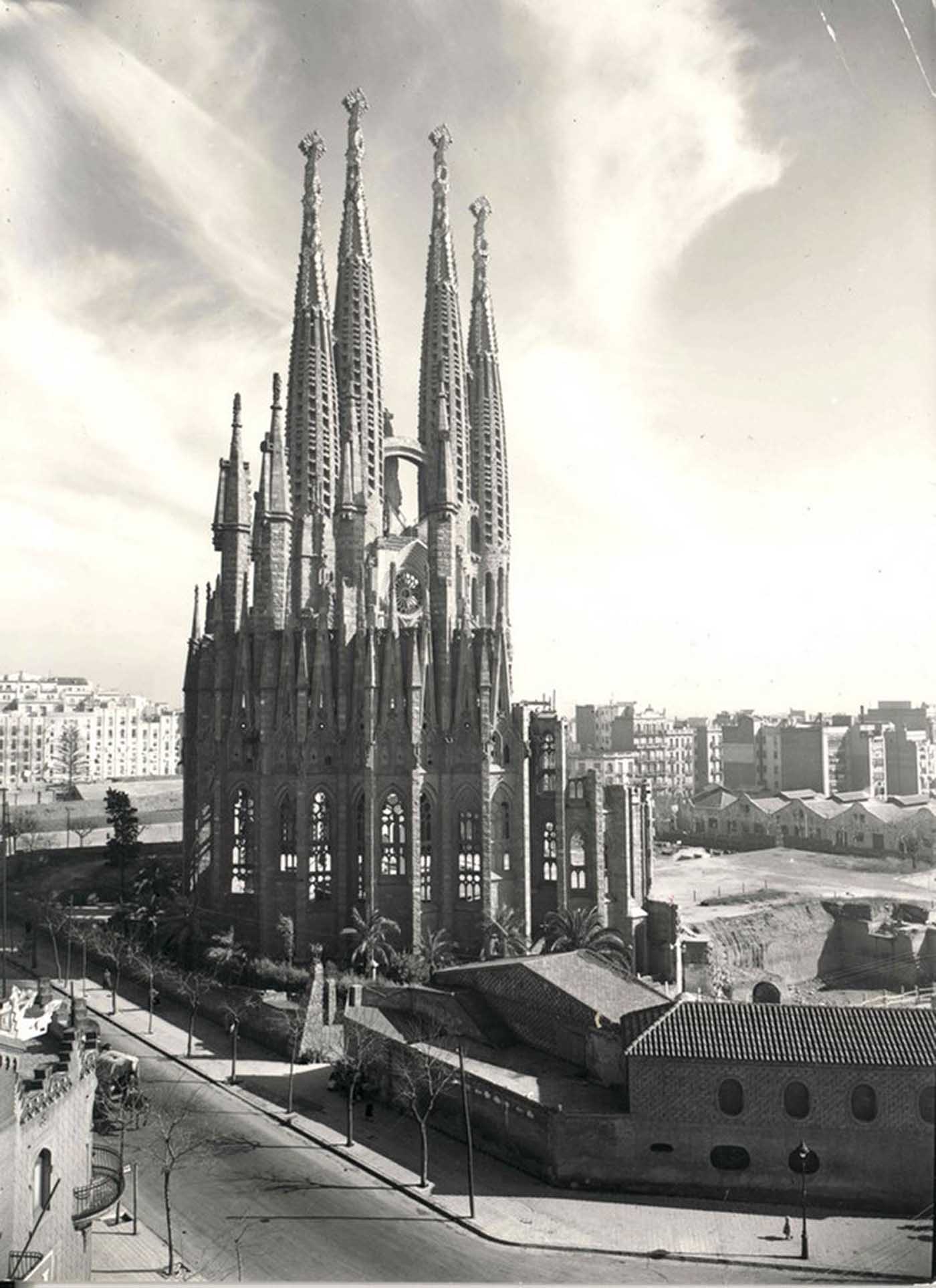 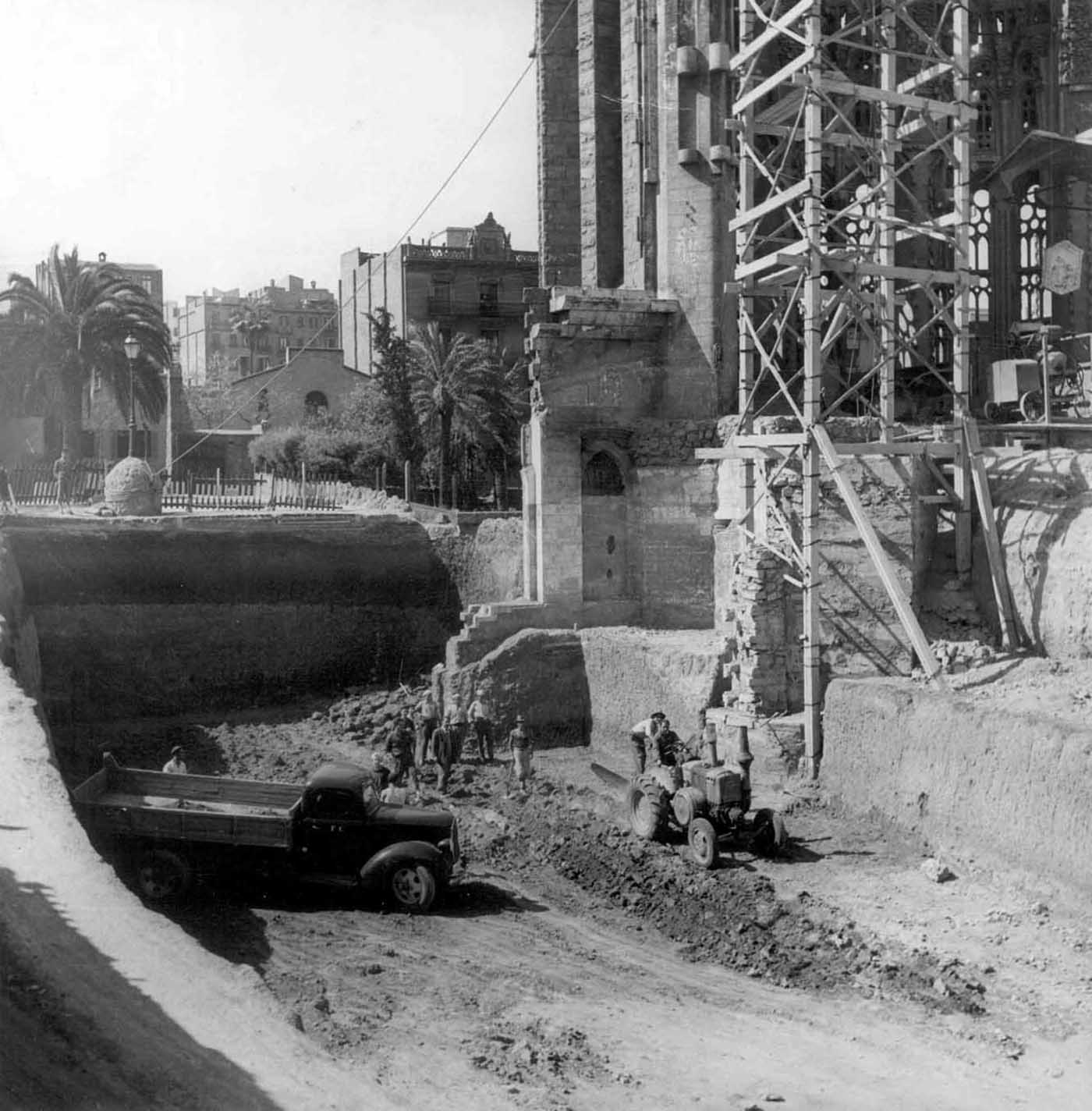 Until the middle of the 20th century, construction was still done using wood scaffolding. A far cry from the means used today. 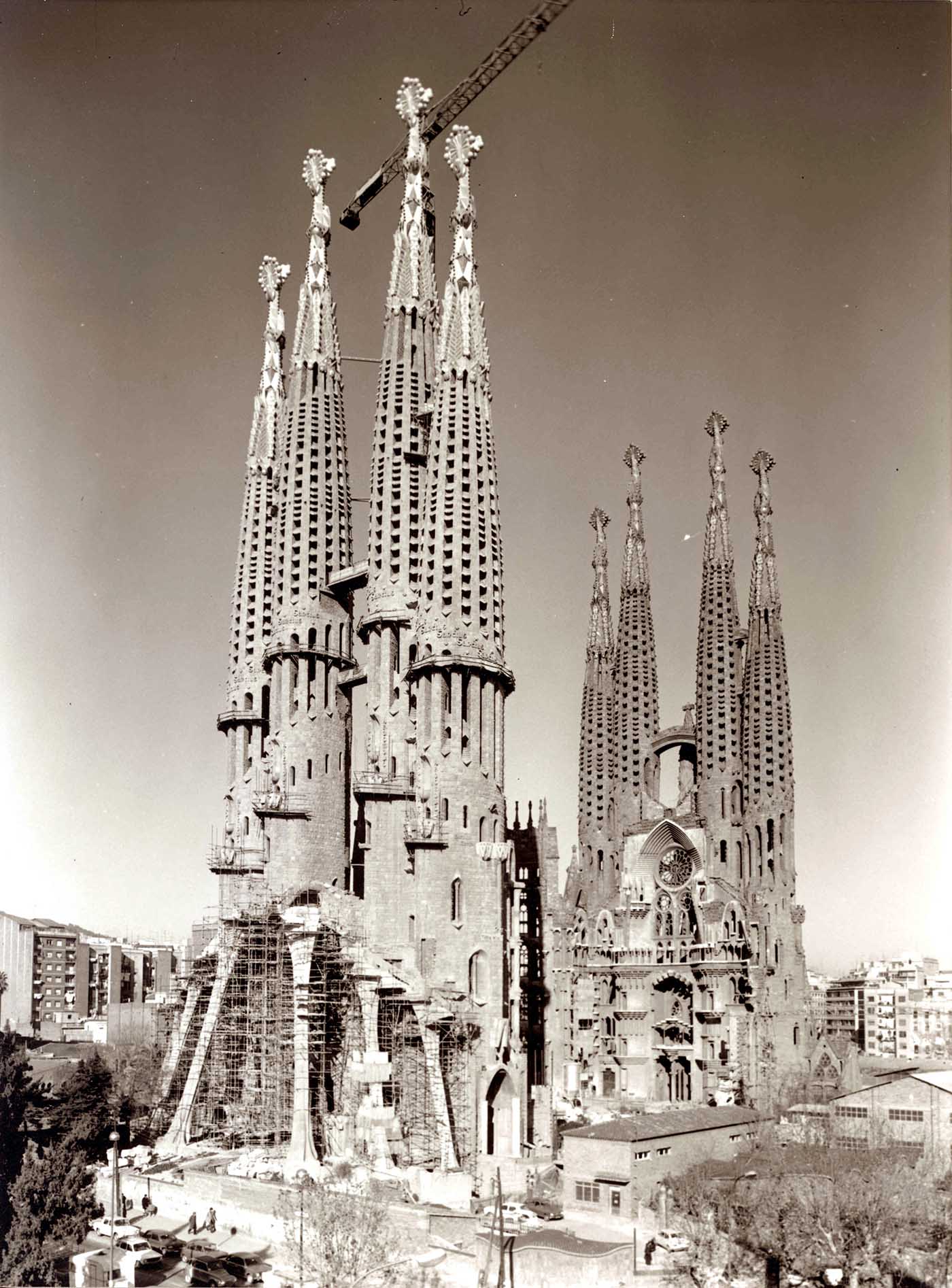 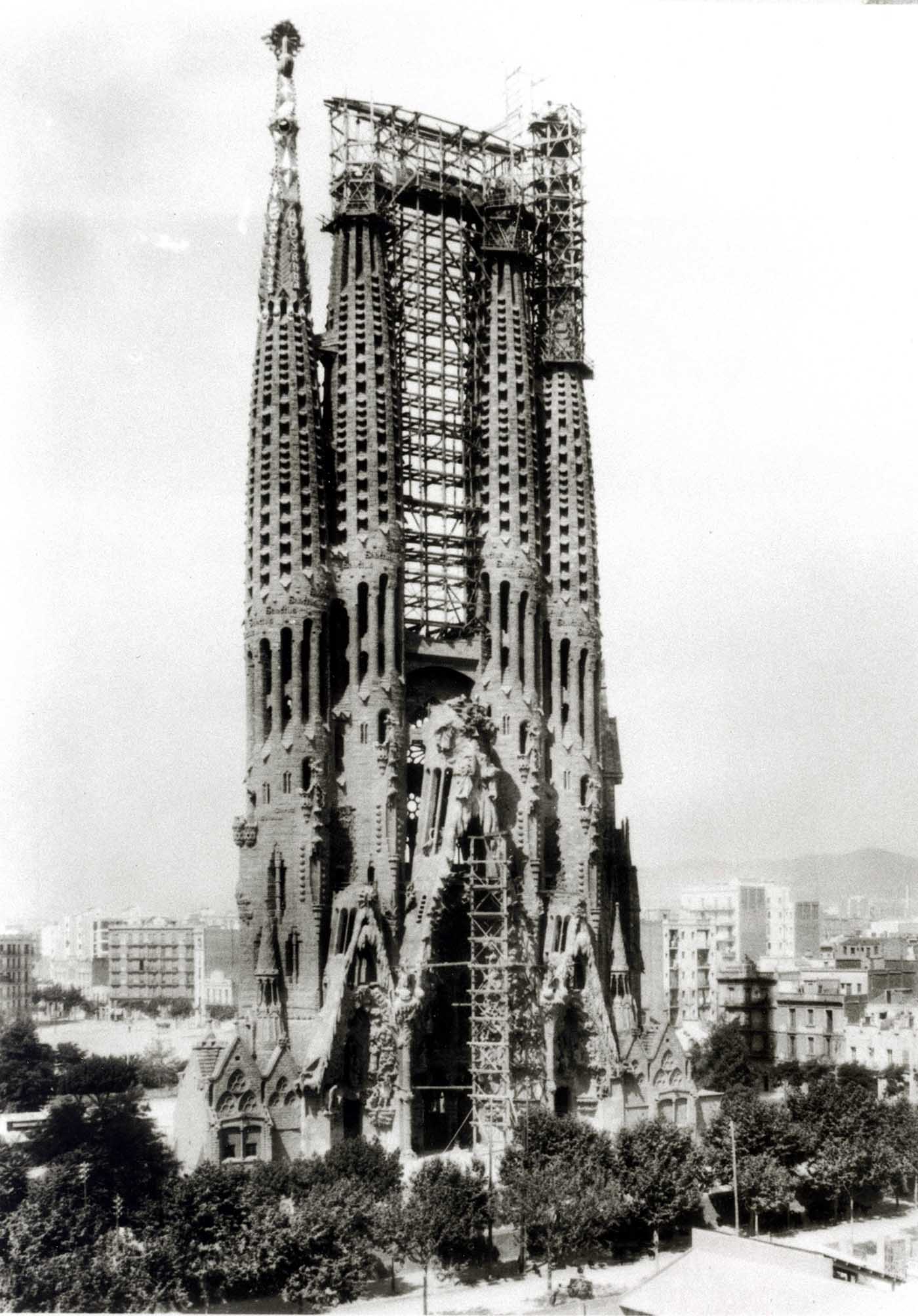 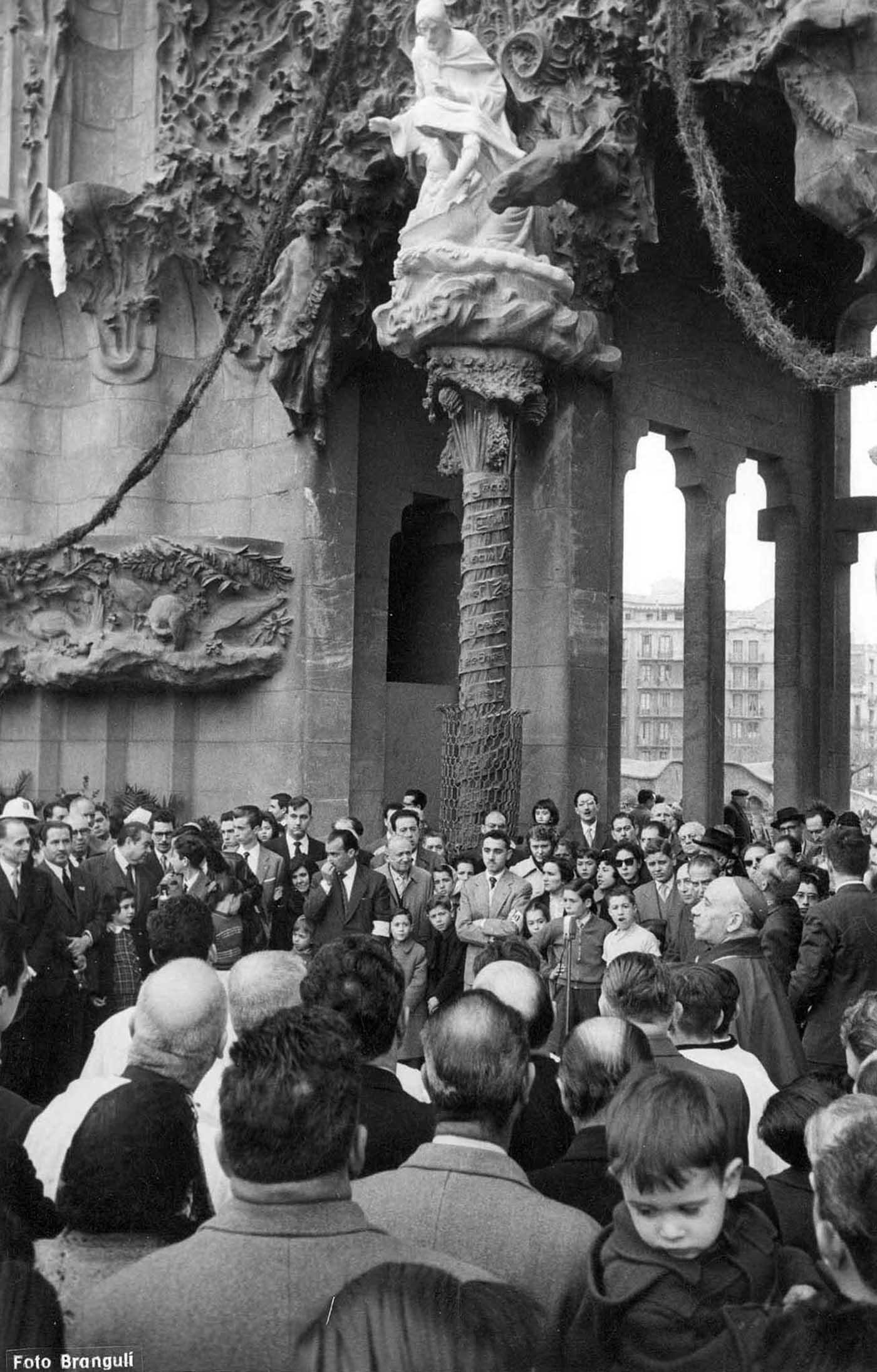 On 19 March, the feast of Saint Joseph, a sculpture group representing the Holy Family is put in place, created by Jaume Busquets. 1958. 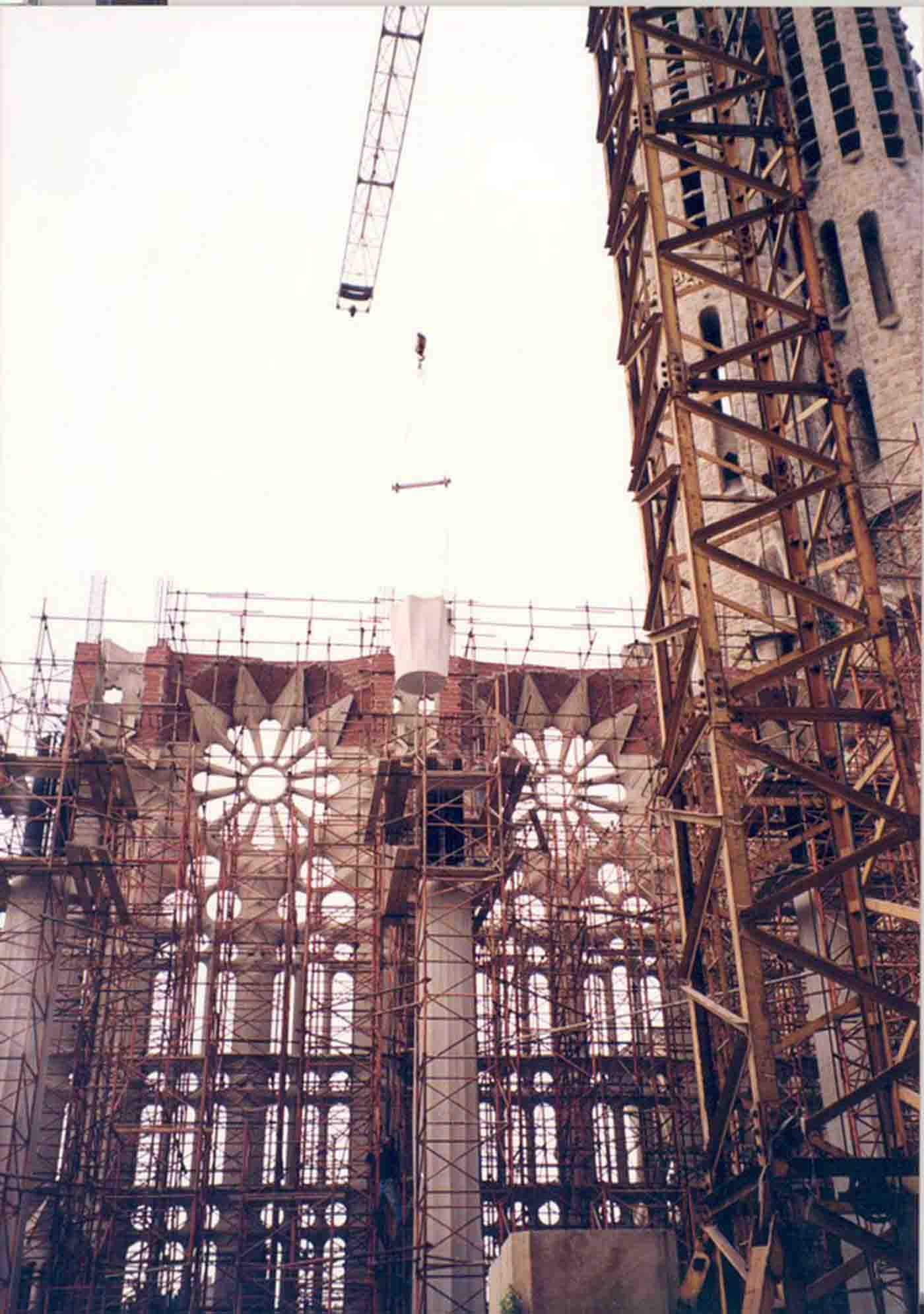 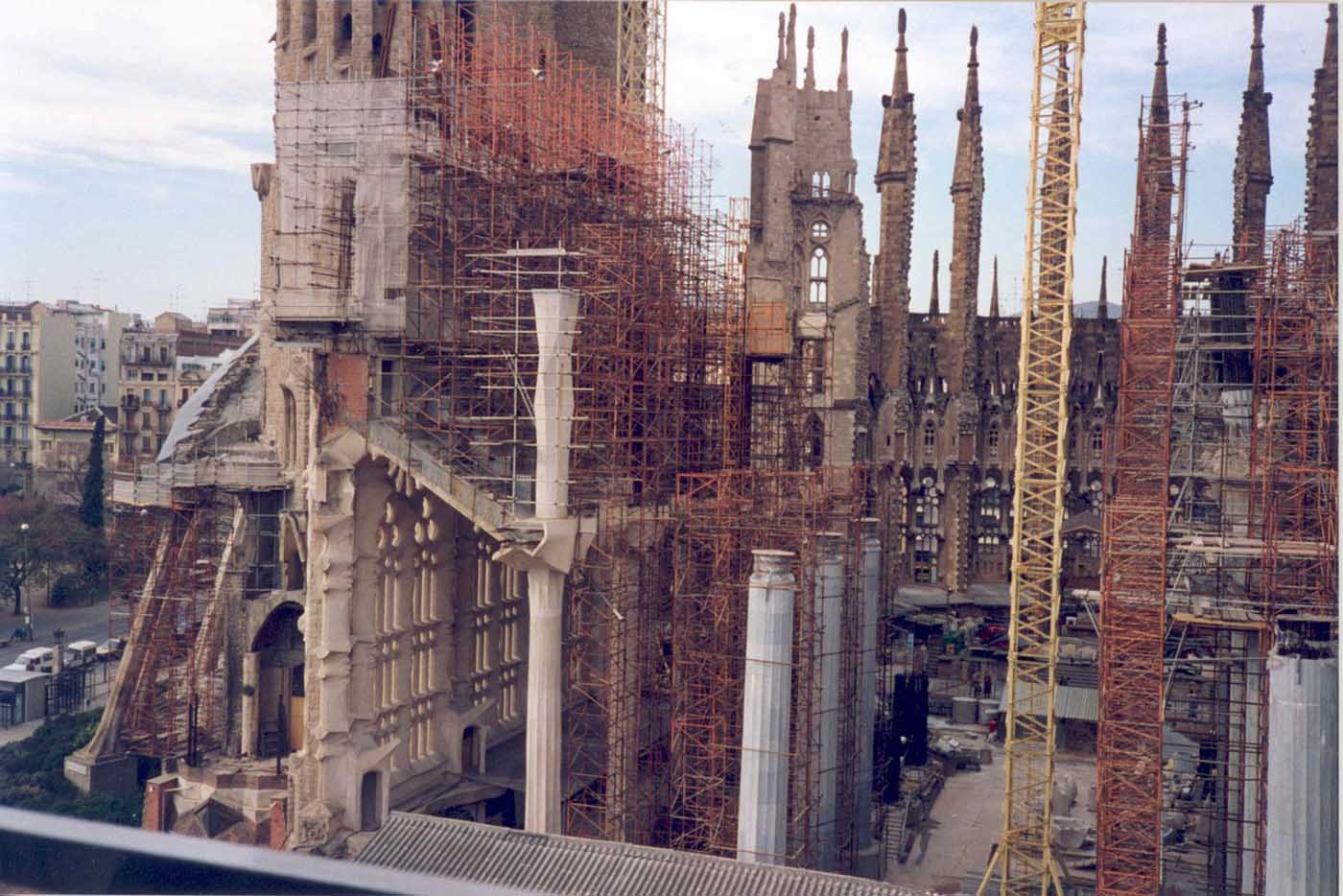 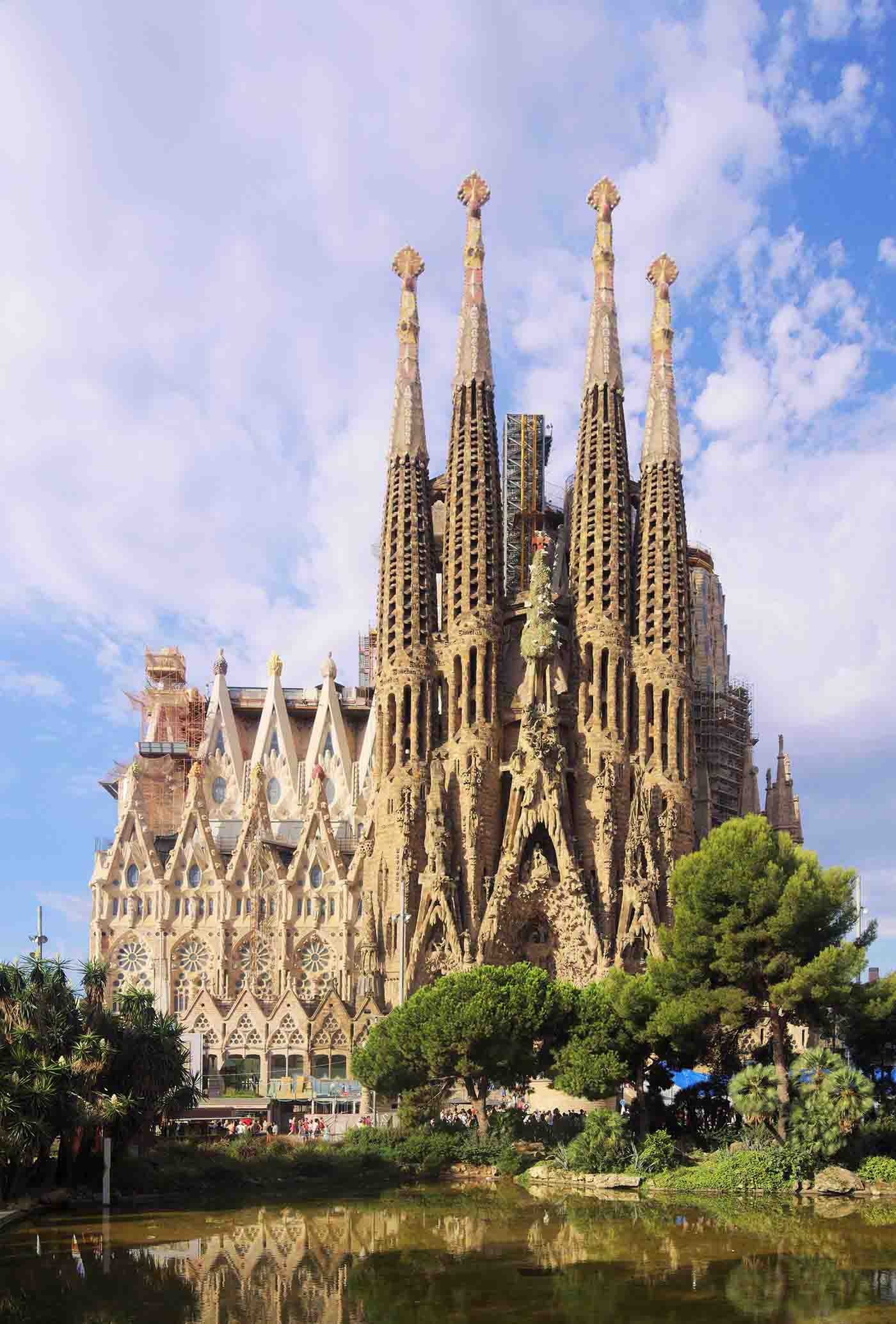 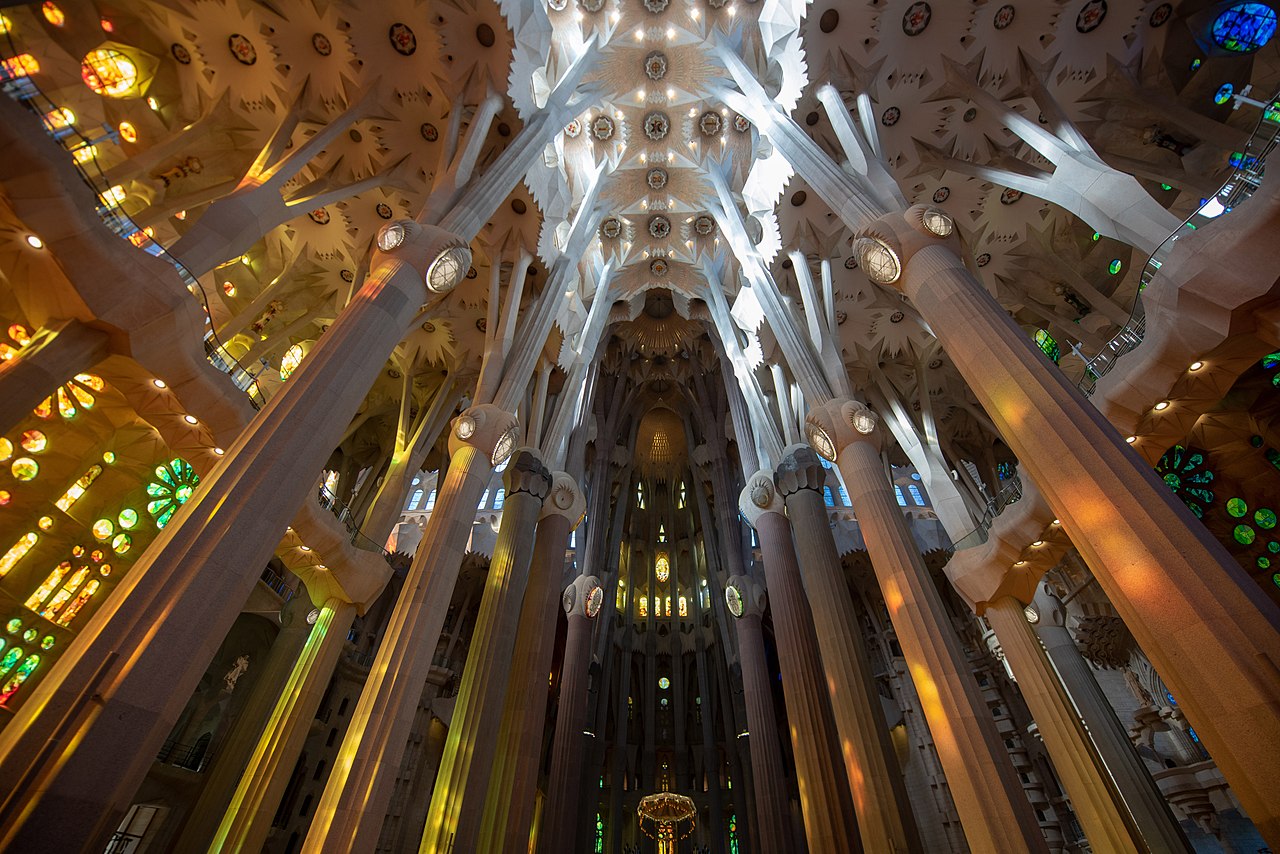 Ceiling and columns of the nave. 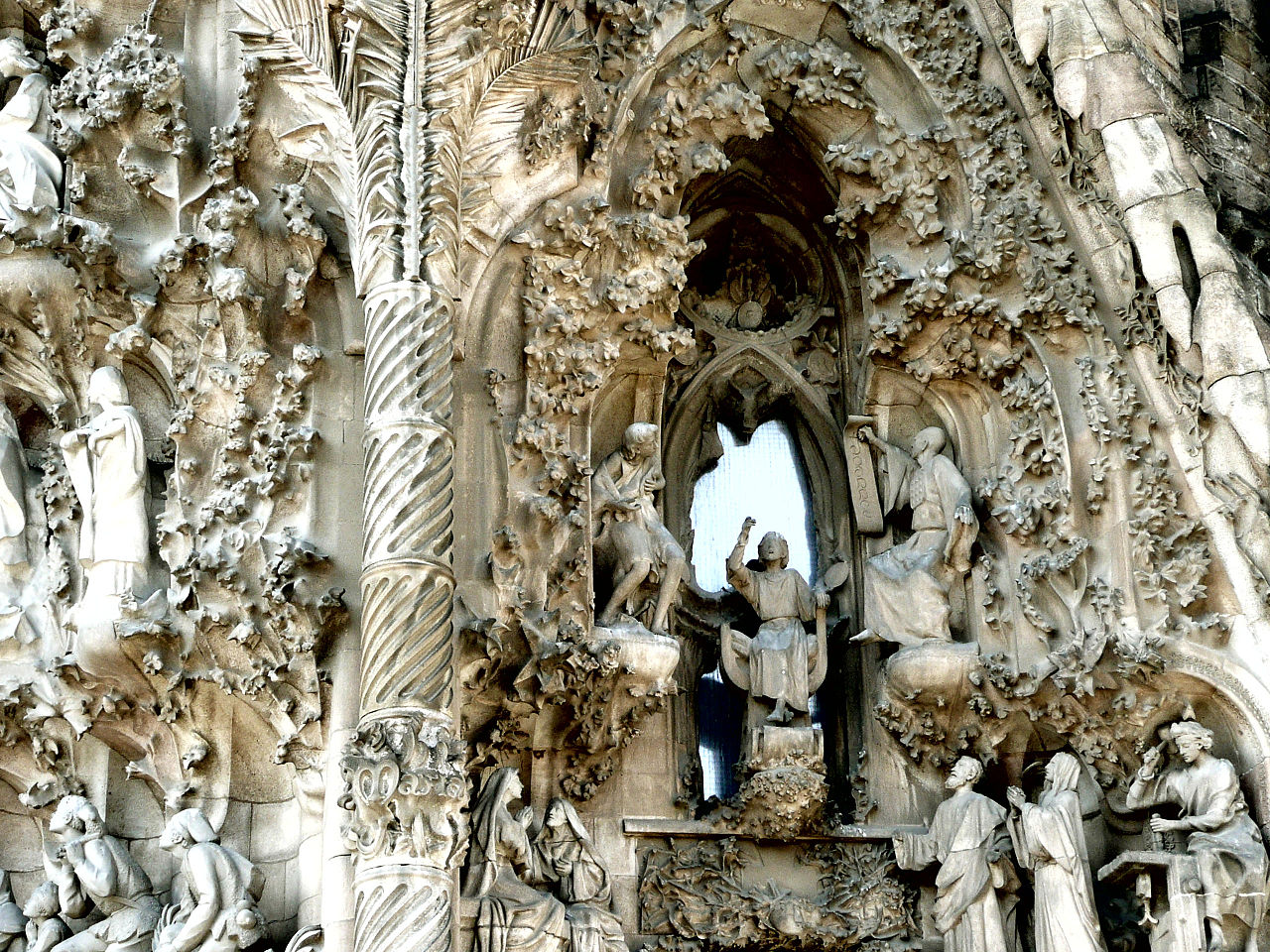 New stonework at the Sagrada Família (left) is visible against the stained and weathered older sections (right).