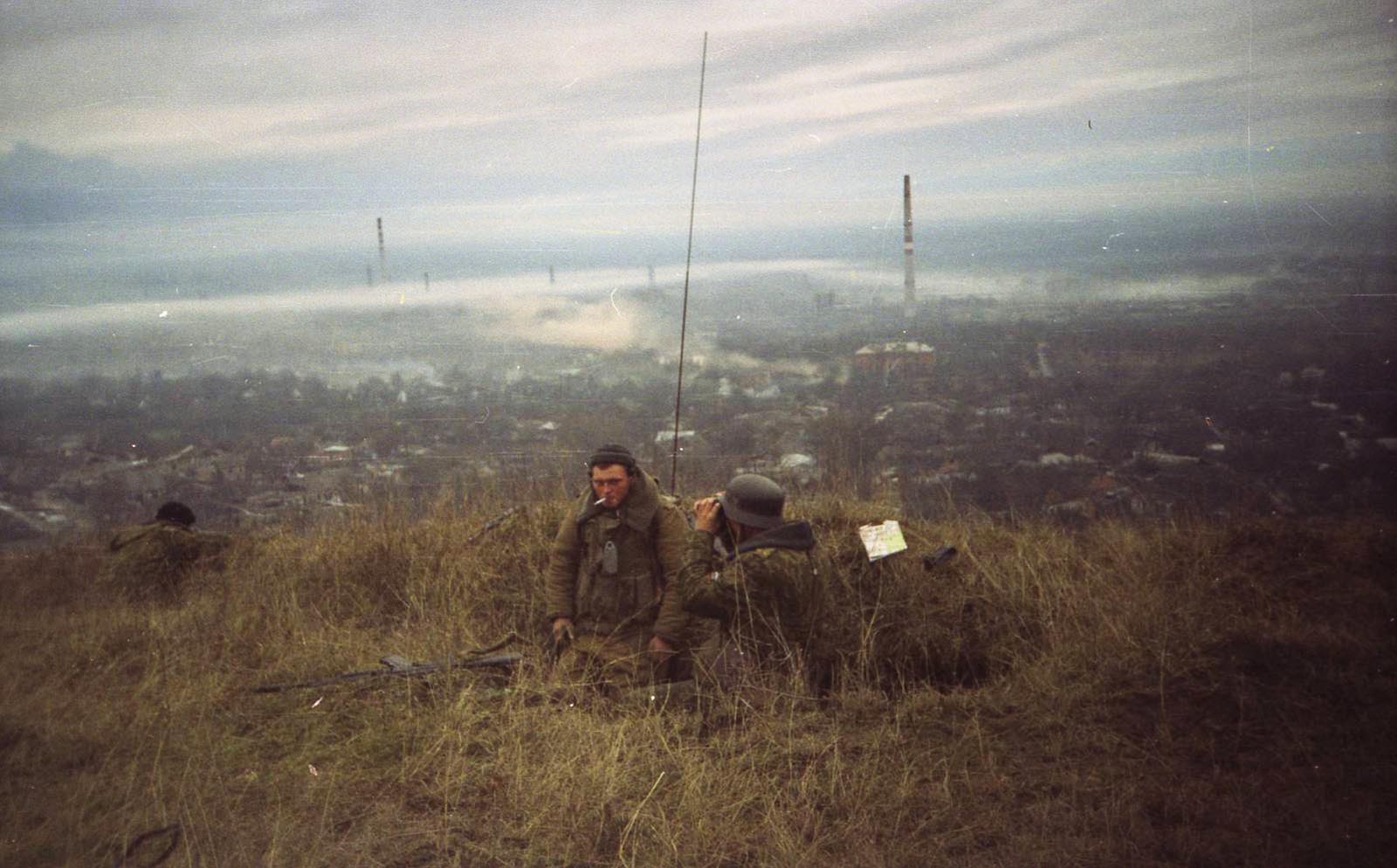 Russian soldiers, one of them wearing a WW2 German helmet, overlooking Grozny, 1999.

This is Second Chechen War, shot from Kirovo, near Grozny. They are not marines, just motorized infantry. Regarding the helmet, the German Nazi helmet was seen as a talisman, as a good omen sign. These soldiers’ drab-olive gear and black beanies look just like what the inappropriately used Russian “Naval Infantry” (known as MorPekh) were wearing during the First Chechen.

It’s “inappropriately used” because MorPekh is meant to be used for amphibious landings and not in-land wars, but for the Chechen Wars, the Russians had to scramble every half-way combat-ready unit that they had.

In the summer of 1999 the warlord Shamil Basayev and his Arab friend Al Khattab, decided to invade the Russian Federal Republic of Dagestan from the neighboring, then-independent Chechnya, in order to create some kind of a trans-Caucasian Islamic Emirates Sharia state.

They had some sympathizers among the locals and expected to be greeted as liberators, but most of the multi-ethnic, moderate Muslim people of Dagestan had actually armed themselves and fought back.

The Islamists managed to capture some towns and villages before the Russian military got there. There were up to 5,000 Chechen, Arab and other Islamic militants who participated in this invasion, which ended up triggering The Second Chechen War and Chechnya being brought back under Russian federal control.

The Russian military was still in pretty bad shape for that one, but they were better prepared and had learned most of their lessons. Several major Chechen warlords and their clans had switched sides, including the powerful clan of the current president of the Chechen Autonomous Republic, Ramzan Kadyrov.

Putin’s strategy of divide and conquer was brilliant. He approached the Kadyrov Clan and made them a deal: we will let you run the Republic without much interference, just as long as you tone down on the whole Islamist thing and the illegal economy, and ultimately answer to Moscow. We will give you billions of dollars to rebuild and it’s no problem if you pocket some of it.

This had proved to be extremely effective. Right now, the Republic is rebuilt and pacified – there hasn’t been any major fighting or terrorism in Chechnya in a long time.