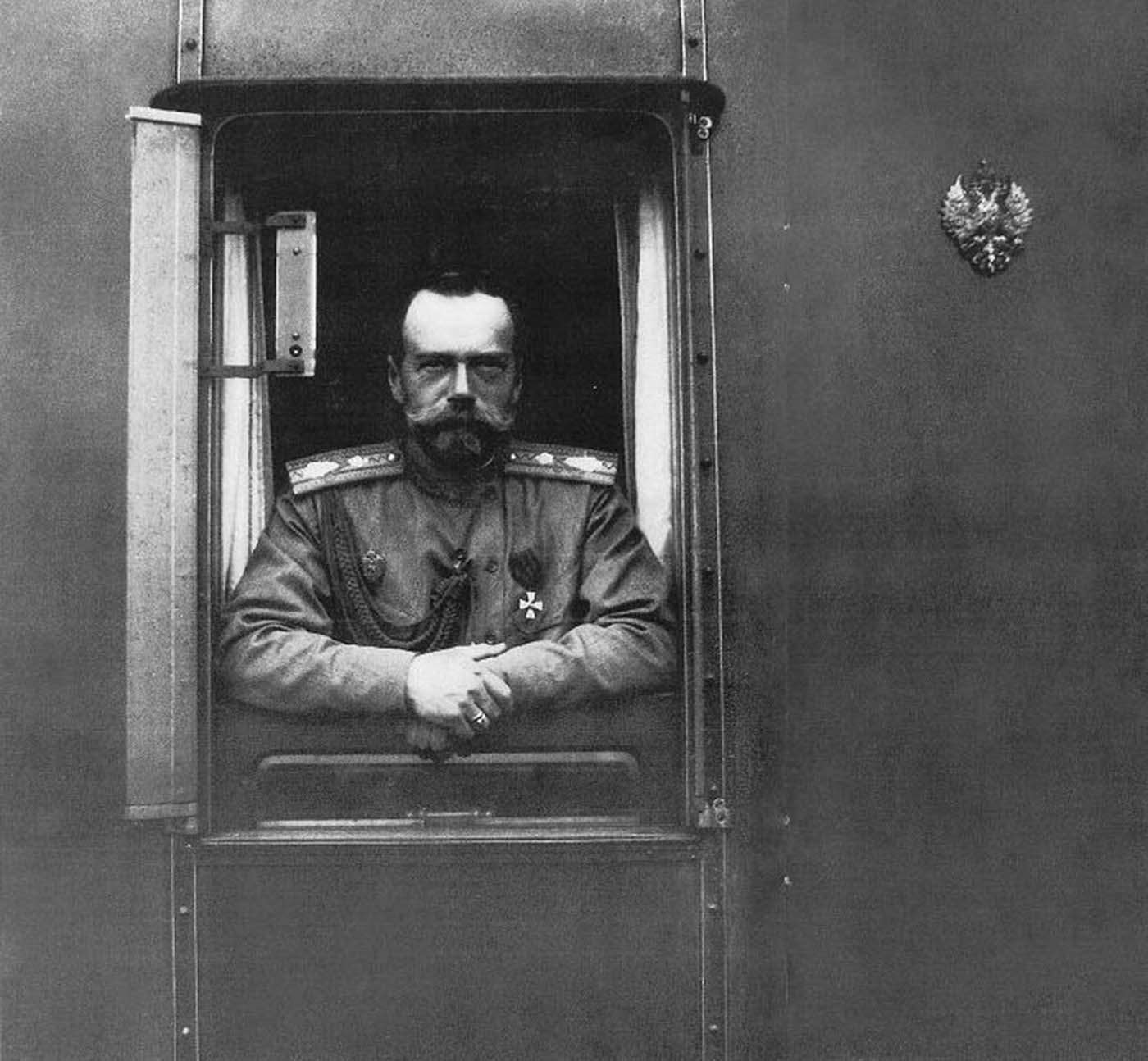 Emperor Nicholas II on board the Imperial Train

The originally seven-car imperial train was intended for the heir of the throne Nicholas Alexandrovich (the future Nicholas II). It was built in 1894-1896 in the Main Car Workshops of the Nicholas Railway Line.

And although the train was designed to accommodate the family of Emperor Nicholas II, already in 1896-97 it was supplemented with three more carriages produced at the Warsaw Railway Workshops.

Subsequently, the make-up of the train was repeatedly altered, old carriages were replaced with new ones and their interior décor underwent changes.

In 1902, the train consisted of ten carriages: a sleeping-car, a saloon car, carriages intended for children, the grand dukes, and the Emperor’s retinue, as well as carriages for railway servicemen, a kitchen, servants, luggage and workshops. Later the eleventh carriage used as a church was added. 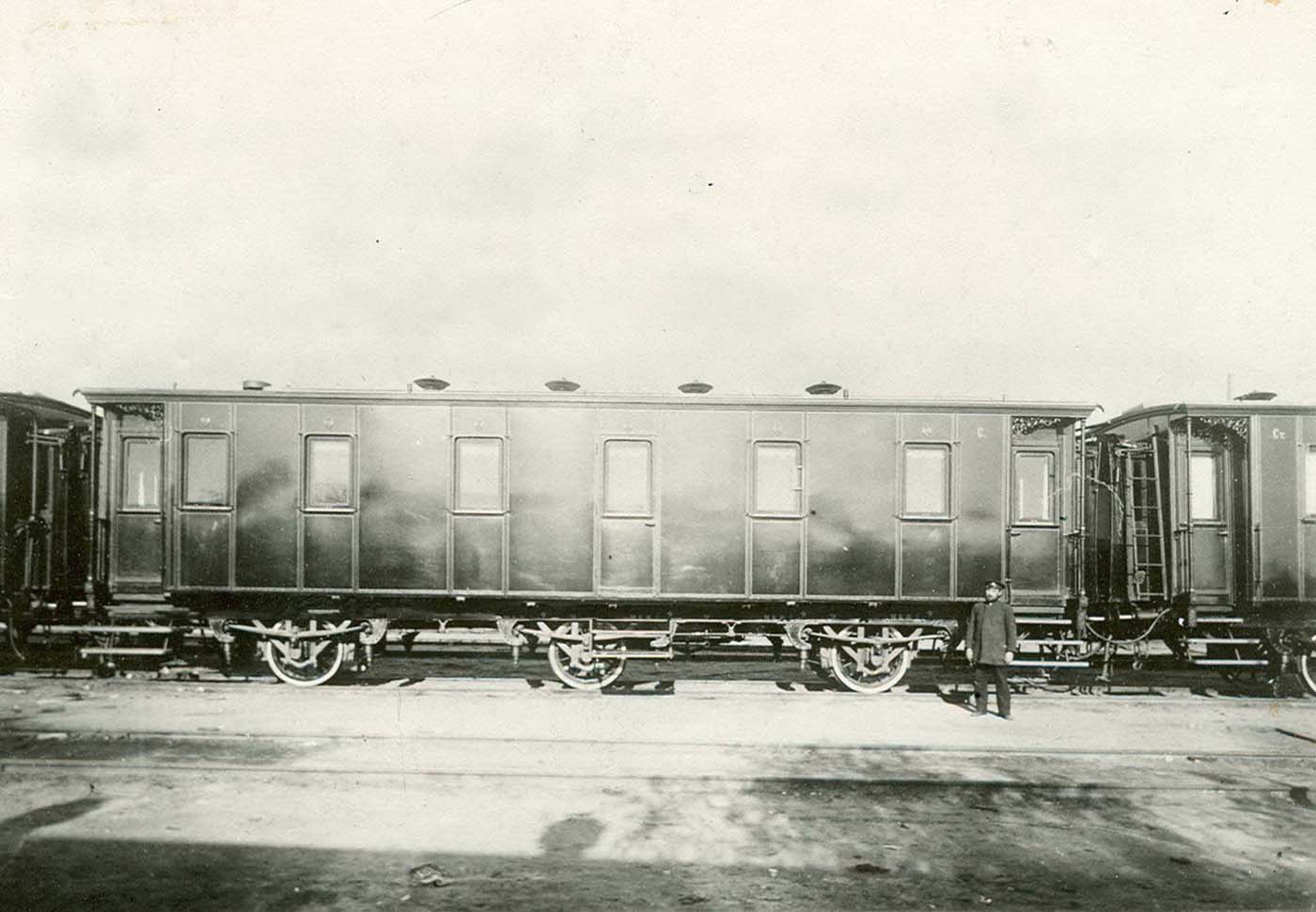 The train was built between 1894-96 in the main Car Workshops of the Nikolaevsky Railway Company.

The carriages of the train were painted blue; the seams were decorated with gilding; all wooden parts were made of Indian teak. The carriages had the chased ormolu coats-of-arms between the windows.

The walls and furnishings were upholstered, mainly in English cretonne with plant ornaments; silk fabrics and leather were amply used. The panels, ceilings and furniture, made of polished oak, walnut, white and gray beech, maple, and Karelian birch, were covered with linoleum and carpets.

The carriages intended for the Imperial family were particularly comfortable. They were provided with everything necessary for convenient life and fruitful work. 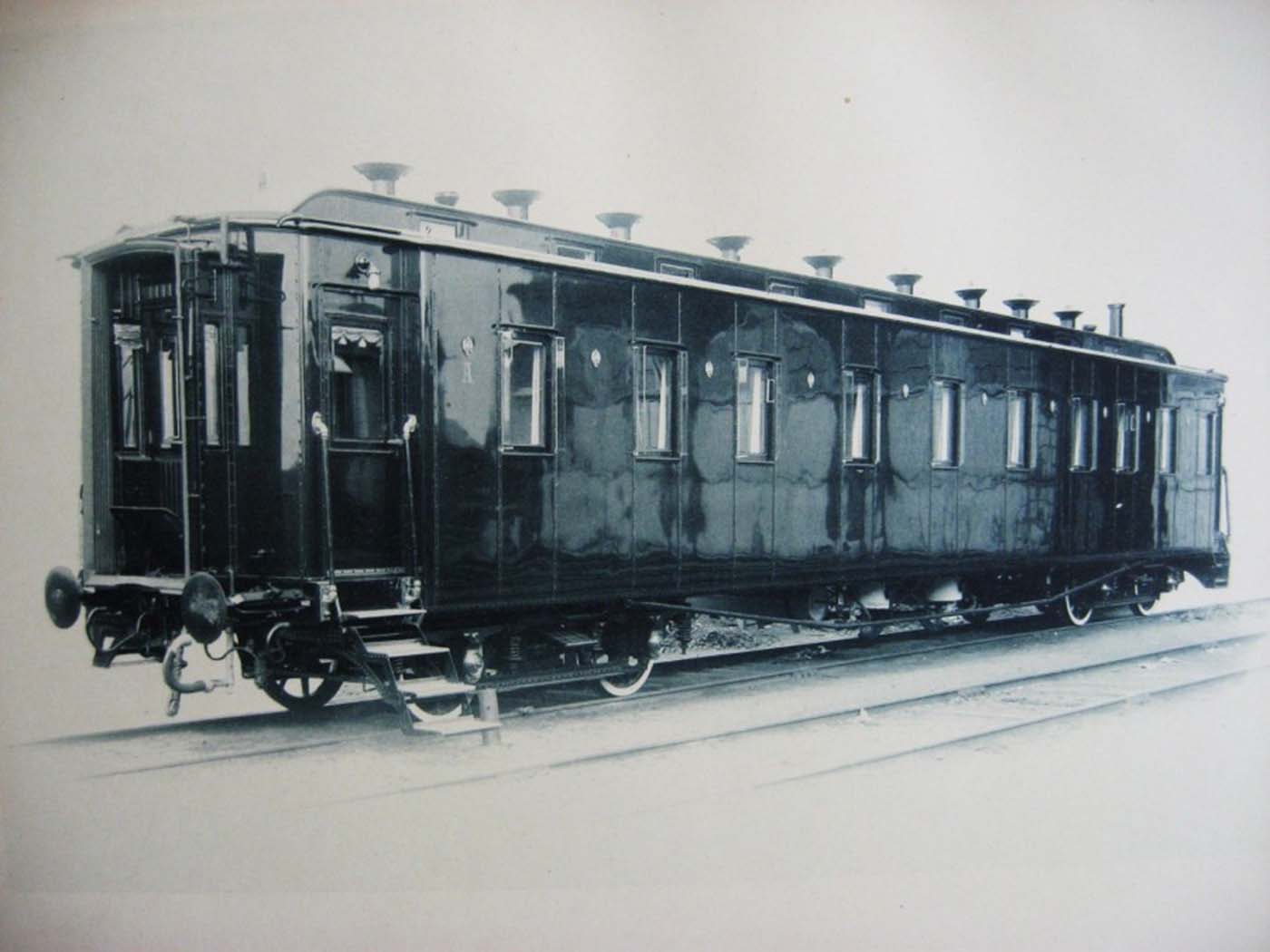 The train on Russian railway.

Originally a bimetallic bath (of copper outside and silver inside) was installed between the studies of the Emperor and the Empress. It was made in Paris and had several reflectors at the sides, to evade the splashing of water when the train moved. Later the train interiors were upholstered and provided with furniture in the Art Nouveau style produced by Robert Meltzer.

The sleeping-car incorporated the studies of Nicholas II and Alexandra Feodorovna, dressing compartments with wash-basins, compartments of the lady-in-waiting and of the valet, and a wardrobe.

The Empress’s compartment had a bed with carved decorations suspended on belts as a hammock. The compartment was separated from the study by a screen of blue silk with a flower pattern.

All the draperies, the bedspread, and the upholstery of armchairs and chairs were in blue silk with matching patterns; a carpet on the floor had a design of flowers and leaves against a birch green ground.

The furniture was of Karelian birch and cedar. The richly carved desk was upholstered in gold-stamped leather; on the desk were a silver writing set of twelve articles, a lamp, a blotting-pad, and a paper-case; numerous family photographs and icons adorned the walls. 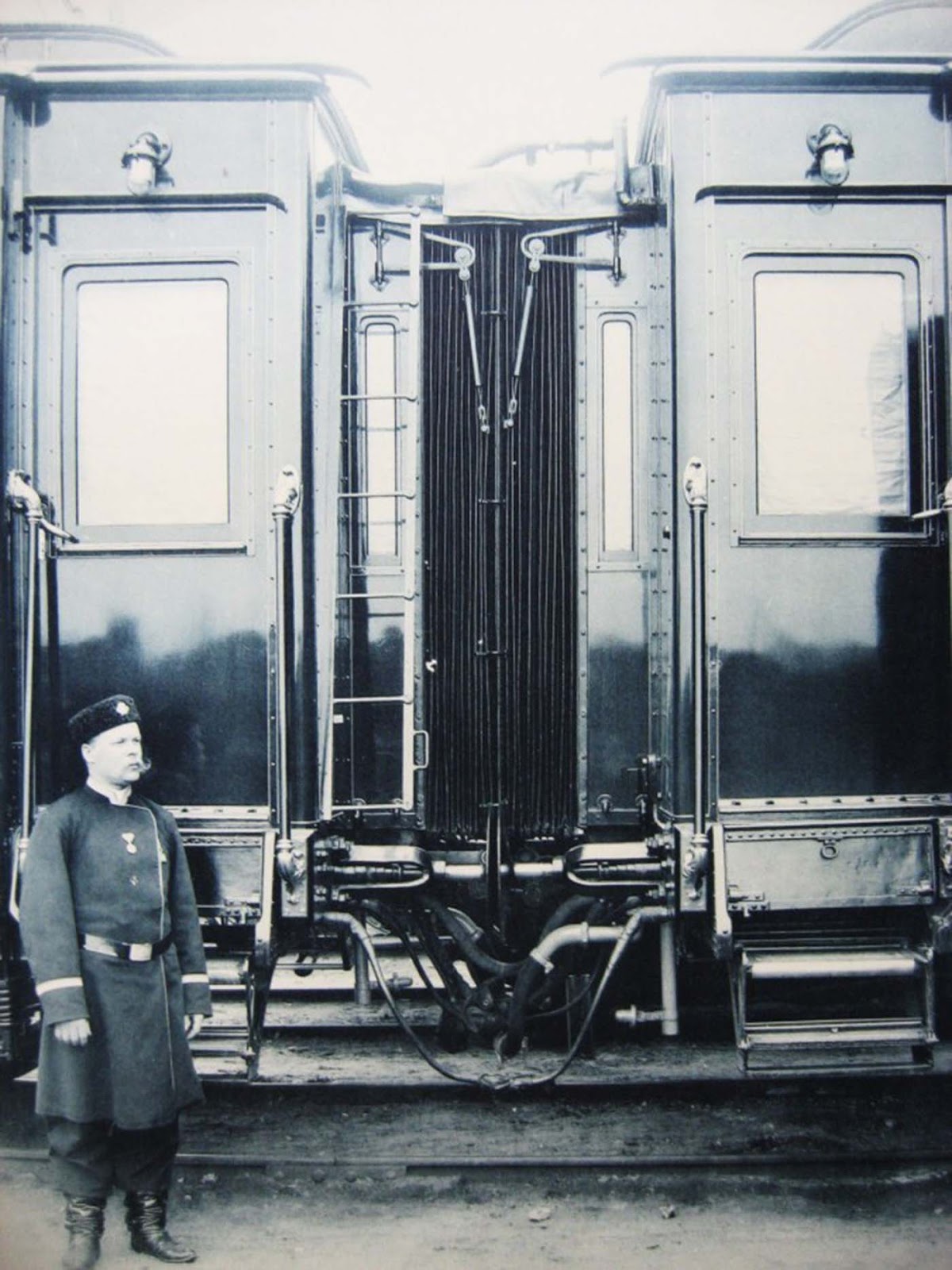 A guard in front of the carriage.

The saloon had soft mahogany furniture in the Art Nouveau style. The walls, sofas, armchairs and chairs were lined in striped pistachio curtains; a plush carpet on the floor had a checked design.

The saloon was illuminated by bronze sconces mounted on the walls and table lamps with silk shades. The interior was embellished with porcelain and glass vases, a clock of black marble and colored stone, an ash-tray of red stone and Dutch porcelain.

A portable crystal ink-pot with a silver cover stood on one of the tables; a special table was intended for various games: dominoes, chess, draughts, bezique, etc.

It was in this carriage that on 2 March 1917 Nicholas II announced to Alexander Guchkov and Vasily Shulgin, the envoys of the State Duma, about his decision to abdicate taken the day before. The carriages of the train, where the abdication was signed, became the mute witnesses of the tragedy of Russia.

After the carriages were given to the Peterhof musem, they were placed in Alexandria Park. Near the carriages, a platform and two wooden structures were built in which an exhibition was mounted dedicated to the history of the train, the war of 1914-18, and the details of the abdication and fate of Emperor Nicholas II and his family.

The carriages of the royal train were destroyed during the War of 1941-45, but some memorial objects kept in them have survived in the stocks of the Peterhof Museum Complex. 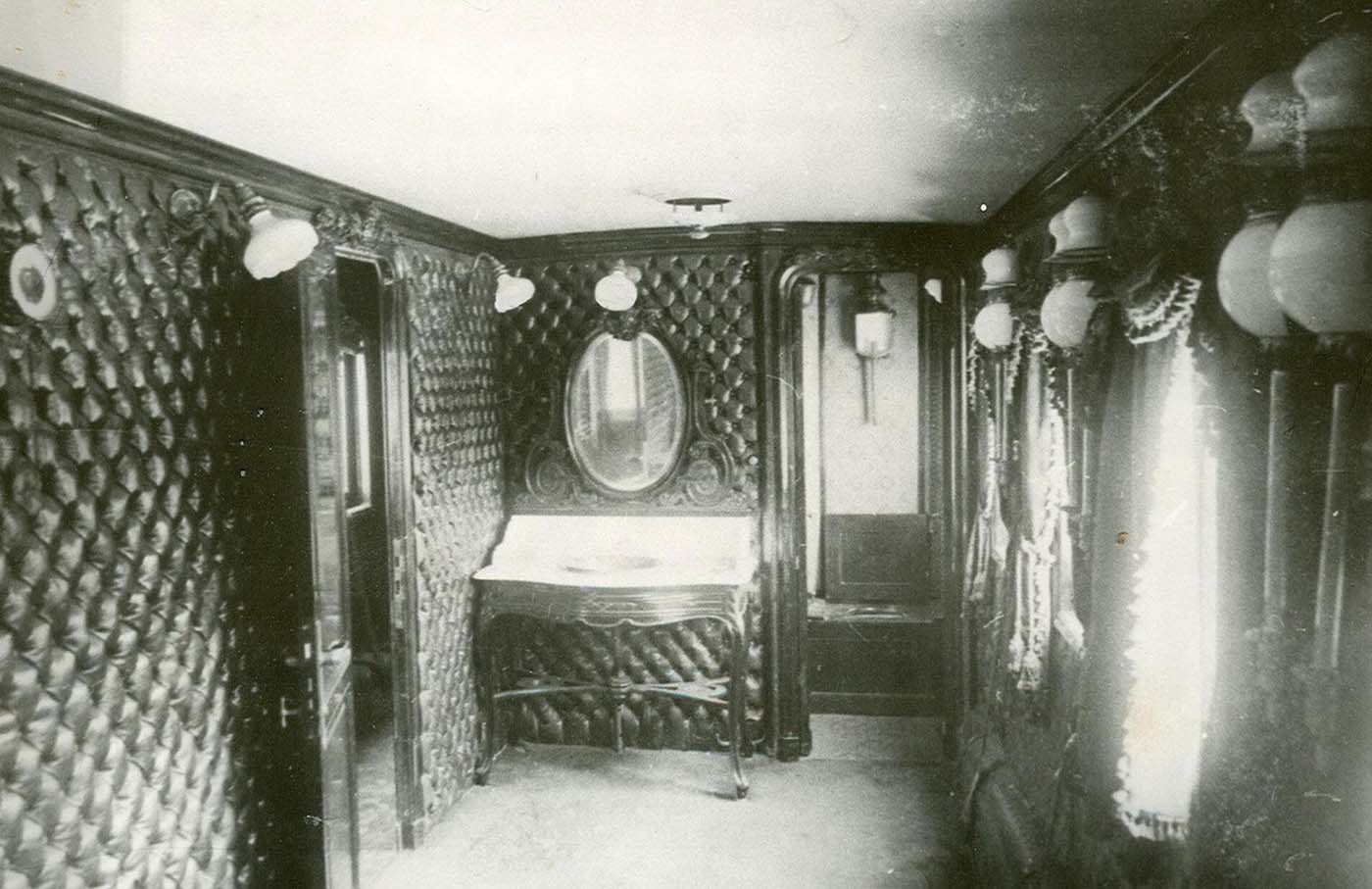 Interior view of one of the carriages. 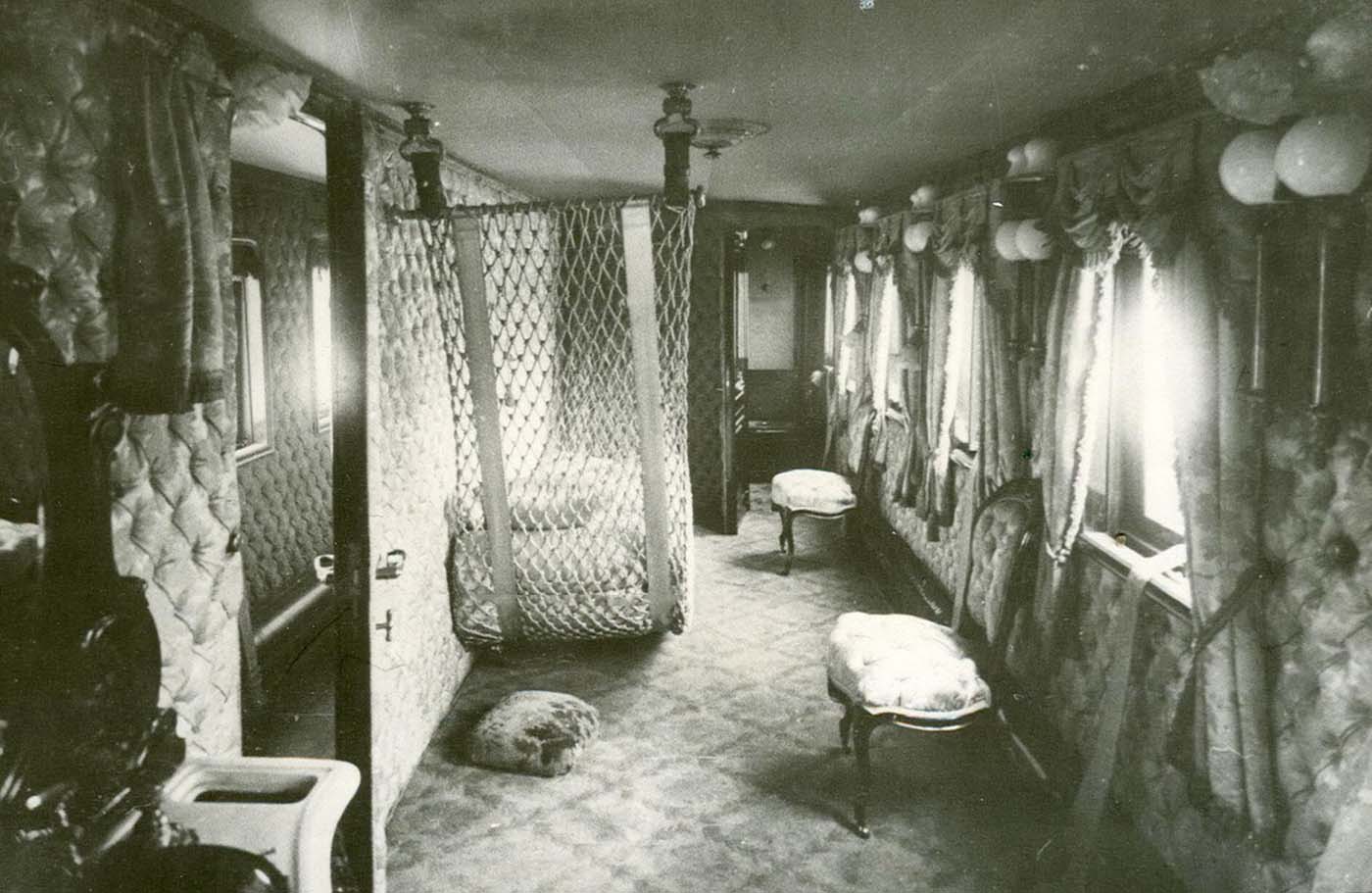 The walls and furnishings were upholstered, mainly in English cretonne with plant ornaments. 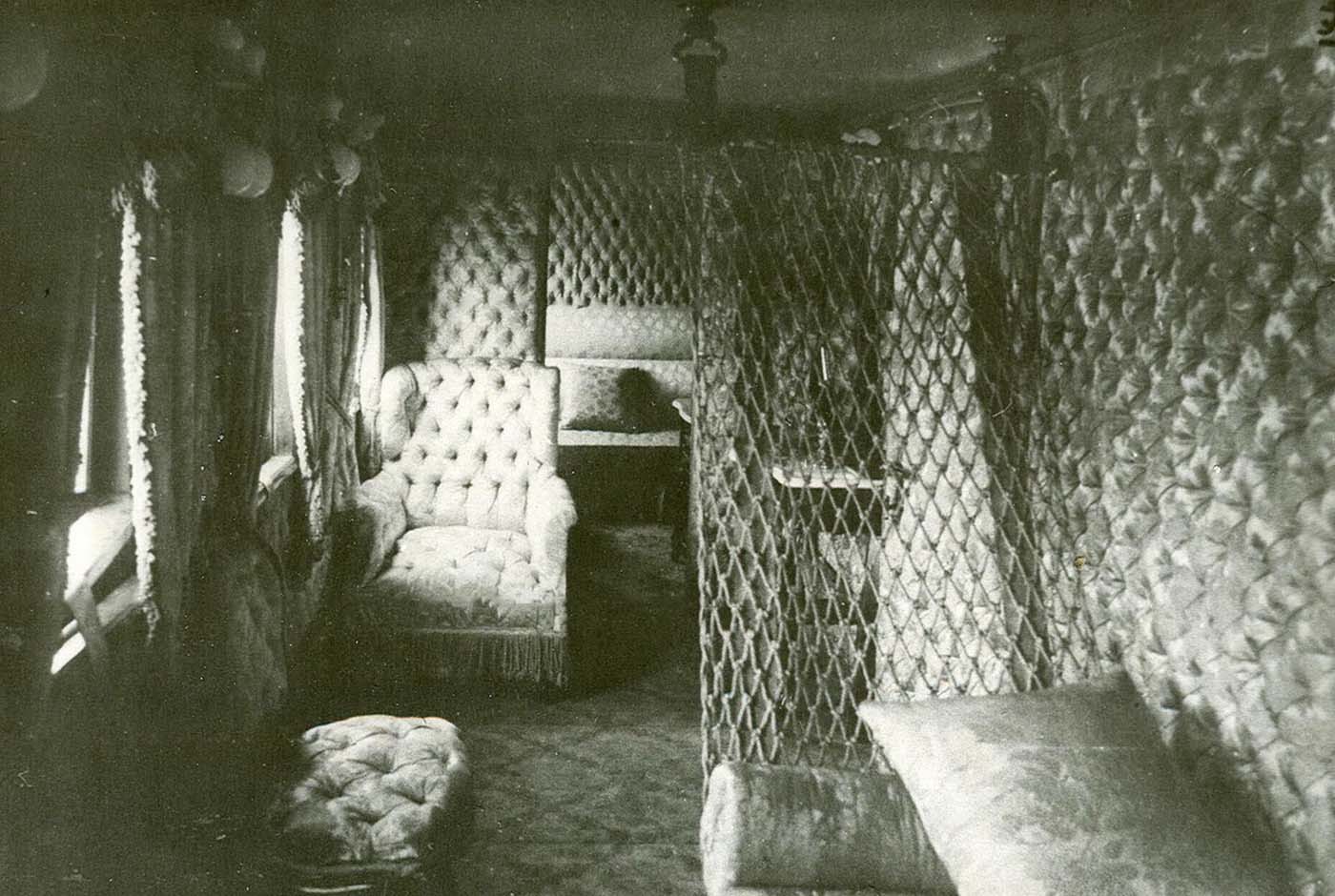 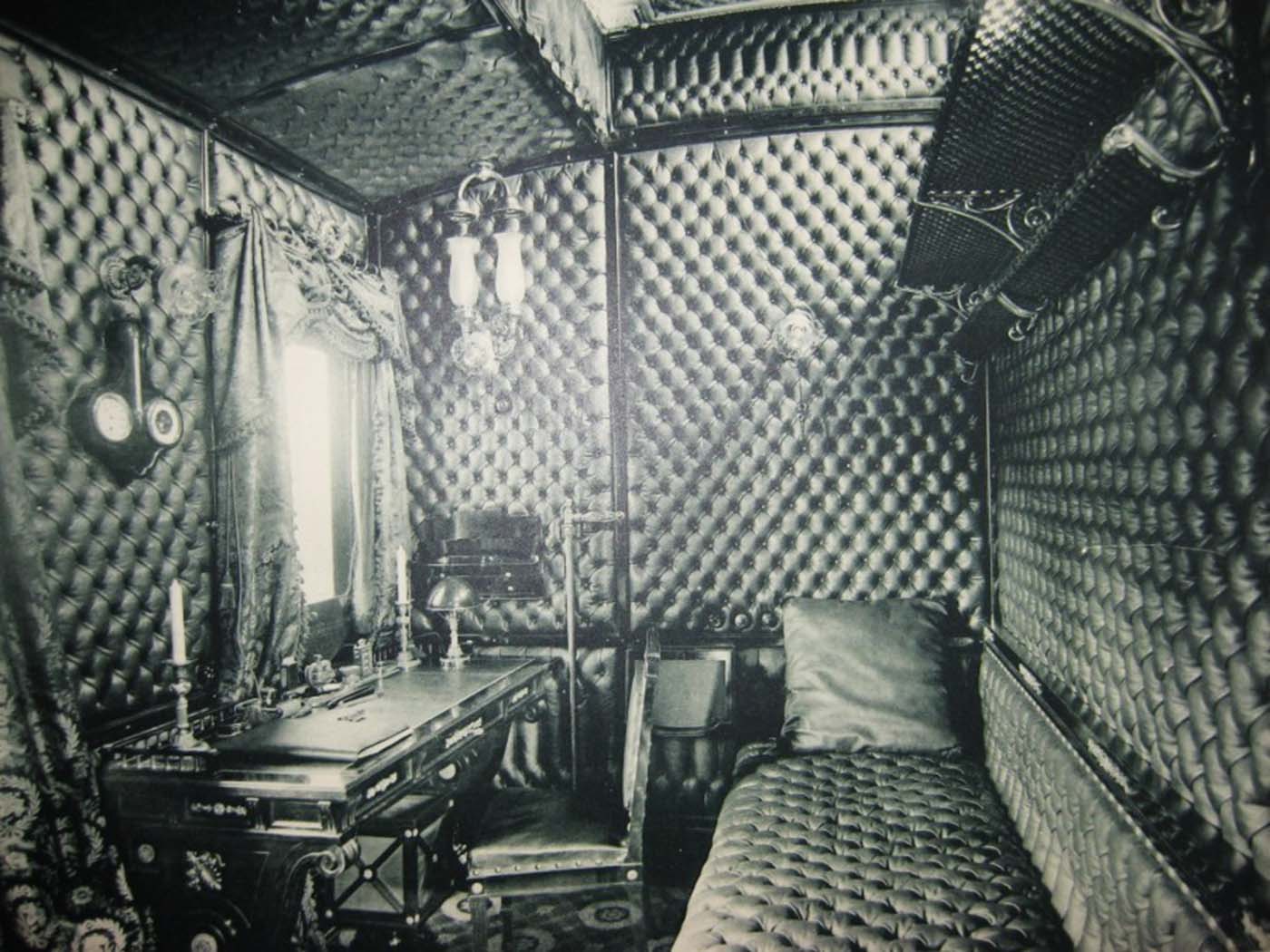 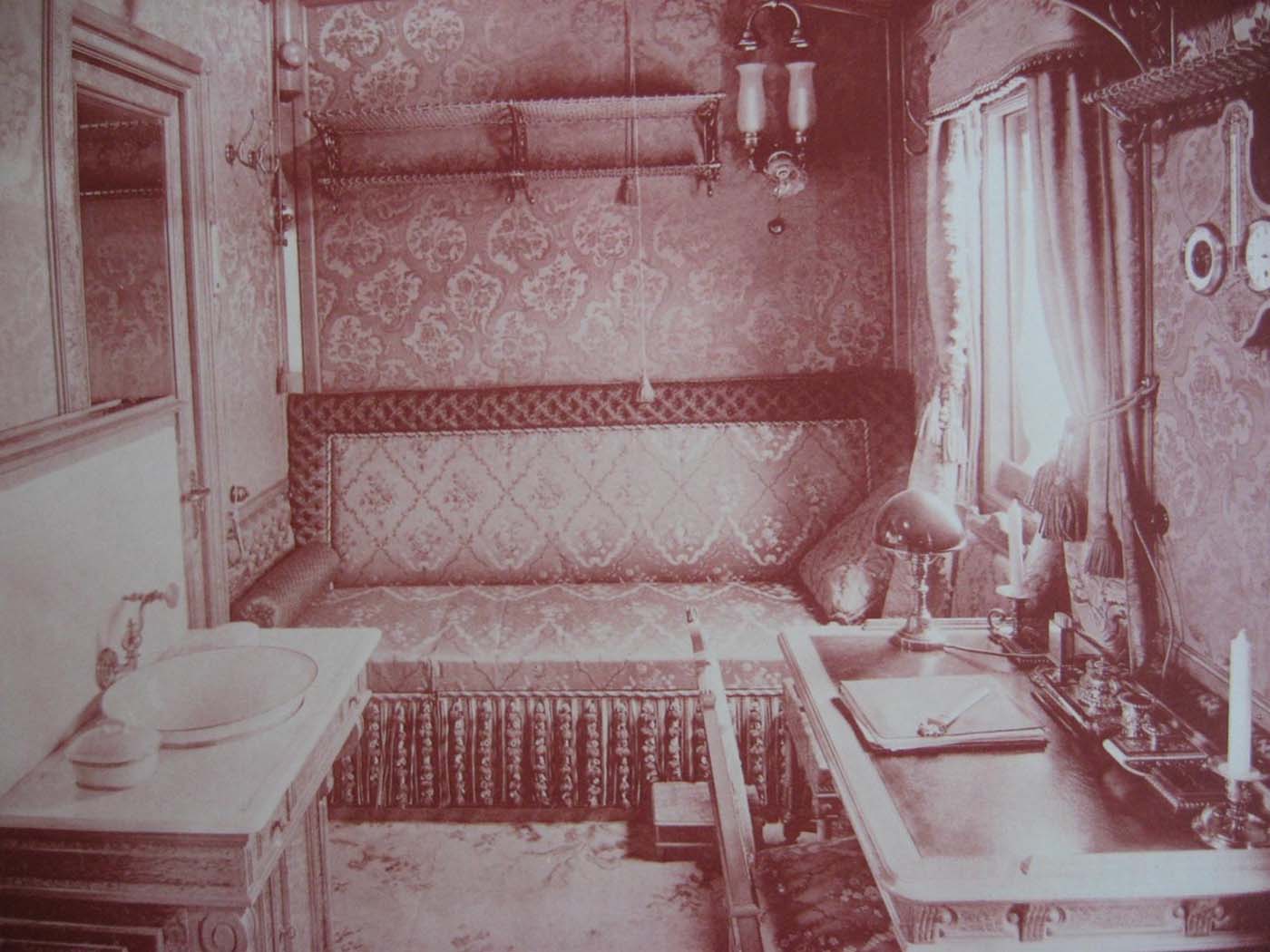 Ladies suite, maybe for the princesses. 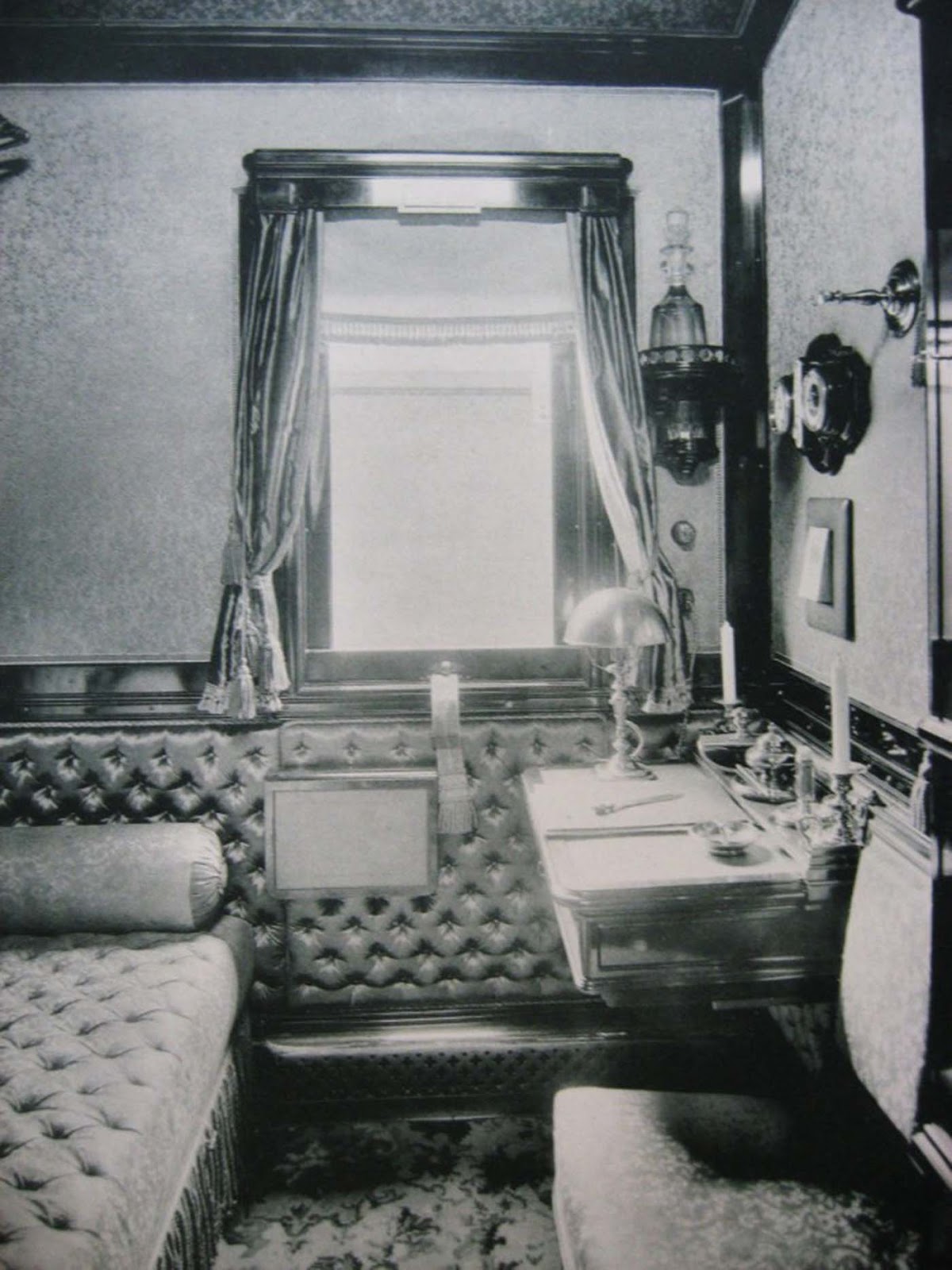 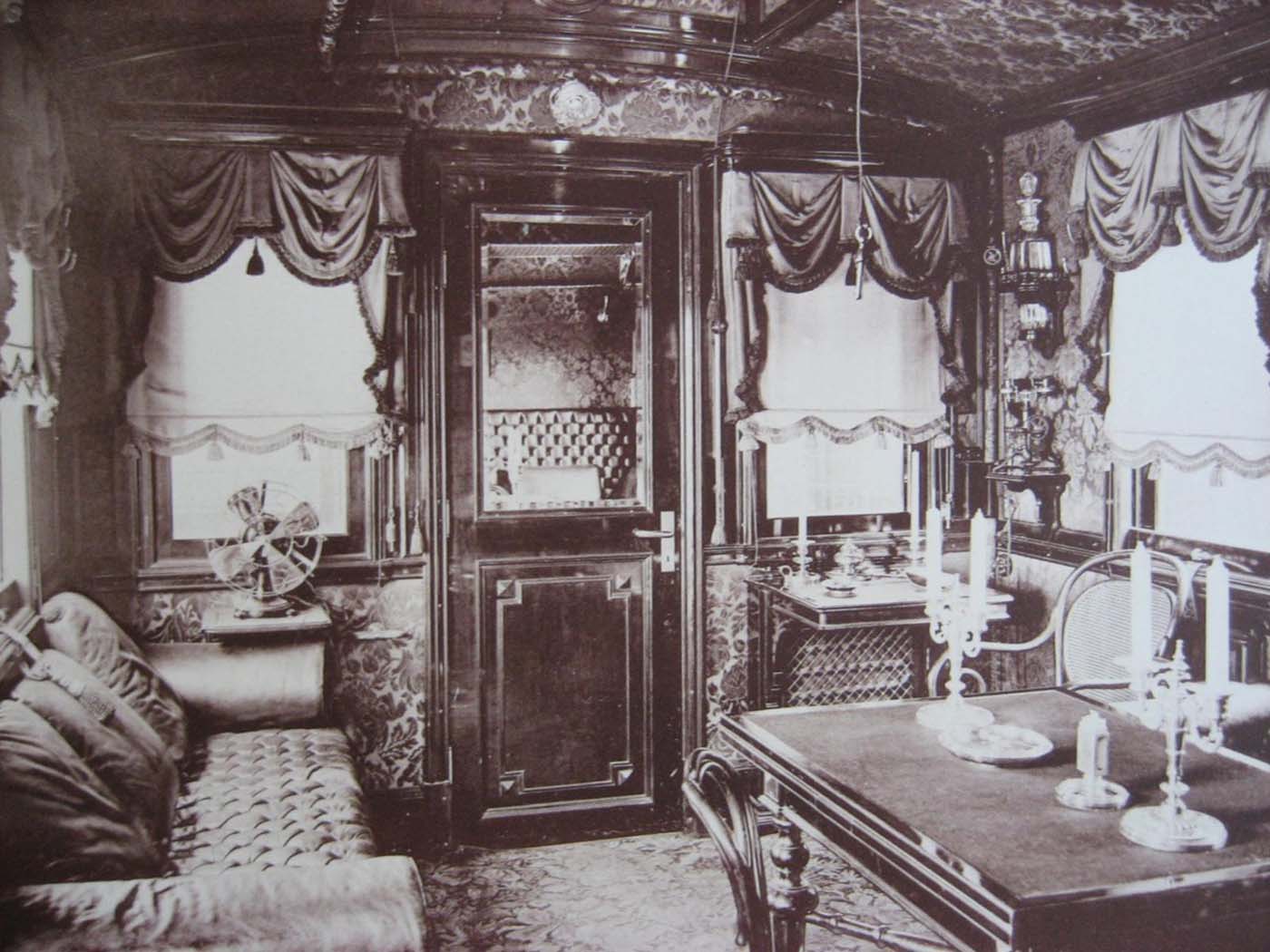 The panels, ceilings and furniture, made of polished oak, walnut, white and gray beech, maple and Karelian birch, were covered with linoleum and carpets. 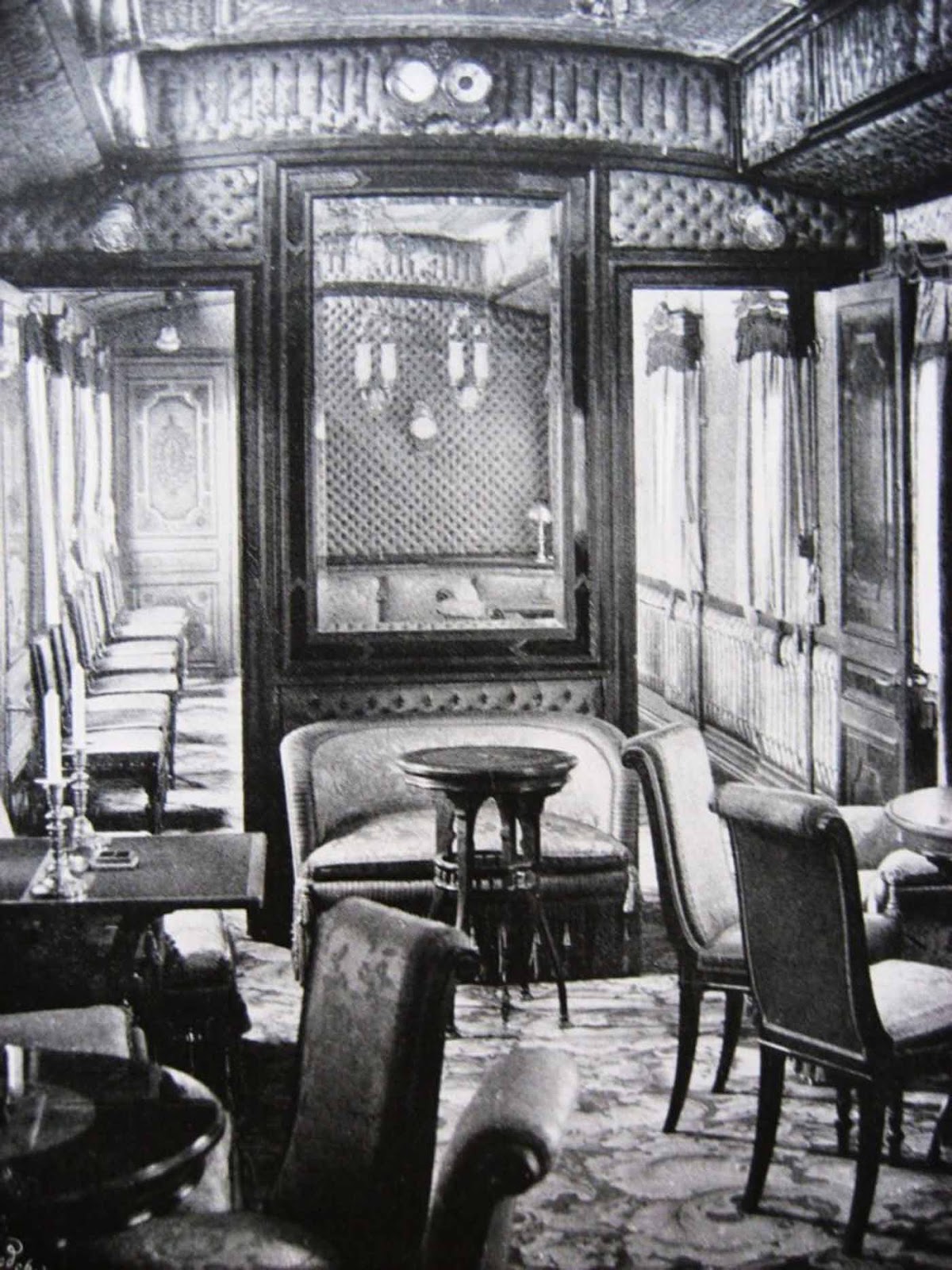 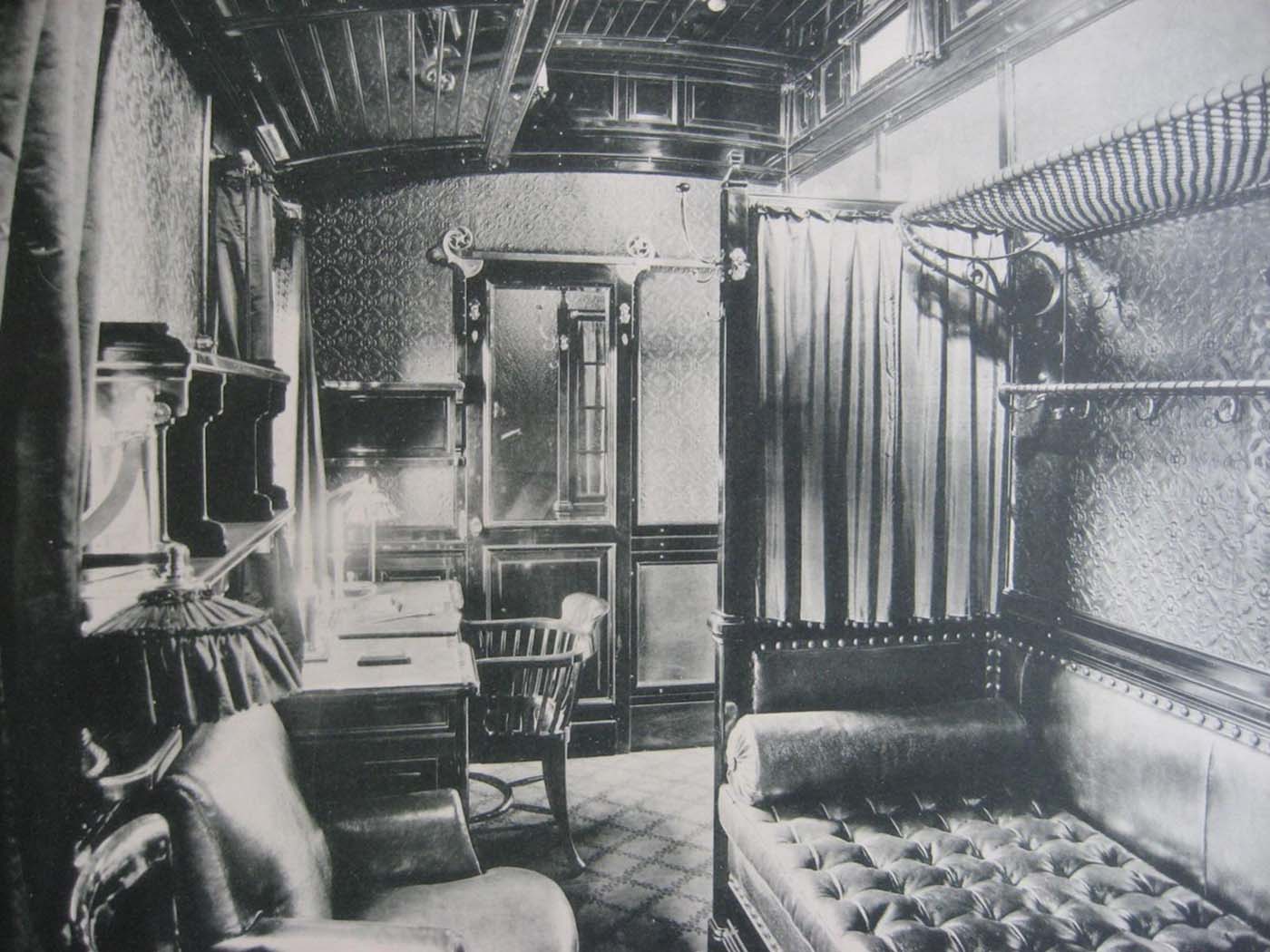 The Cabinet of the Emperor. 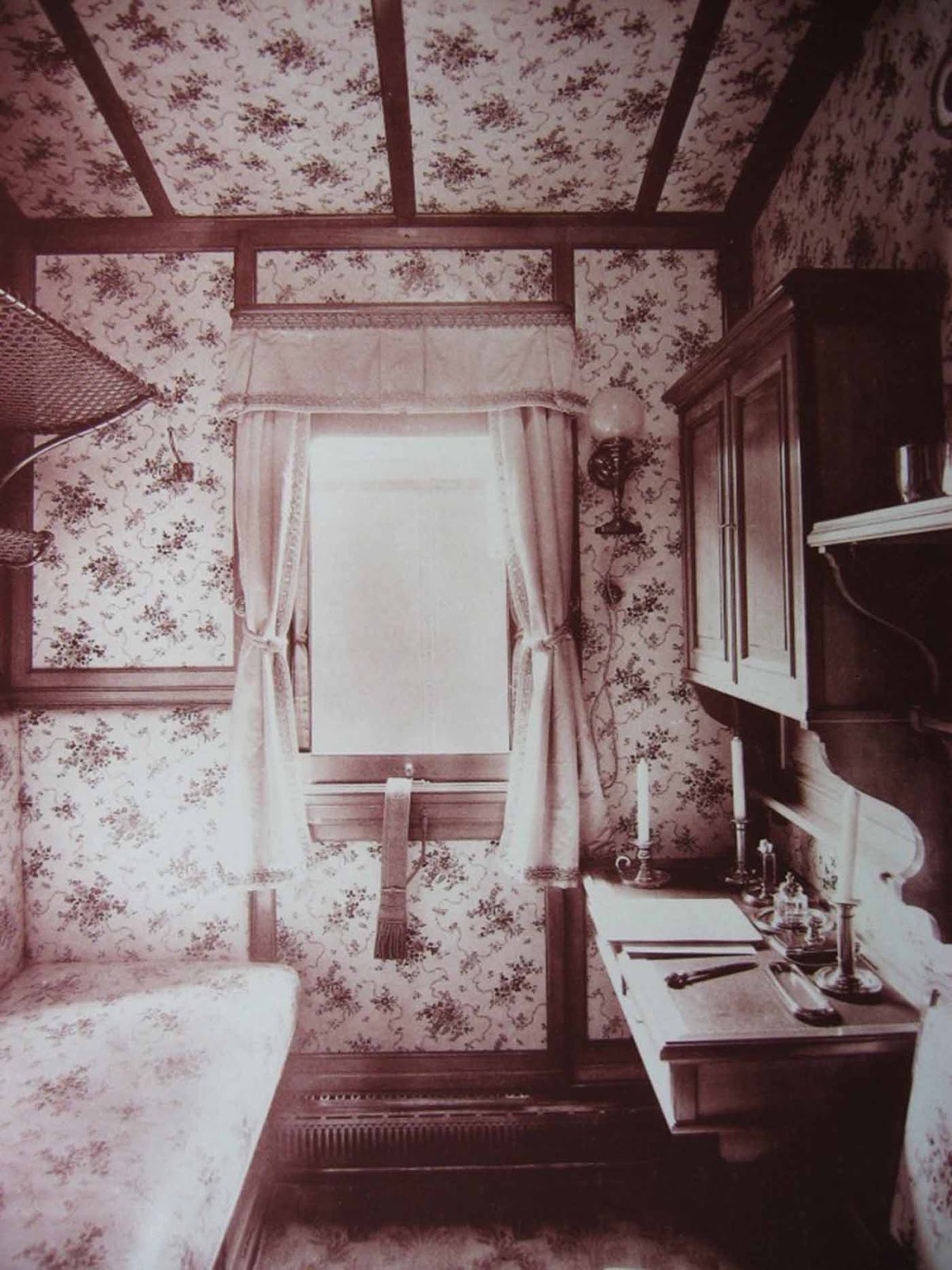 Office for the maid of honor. 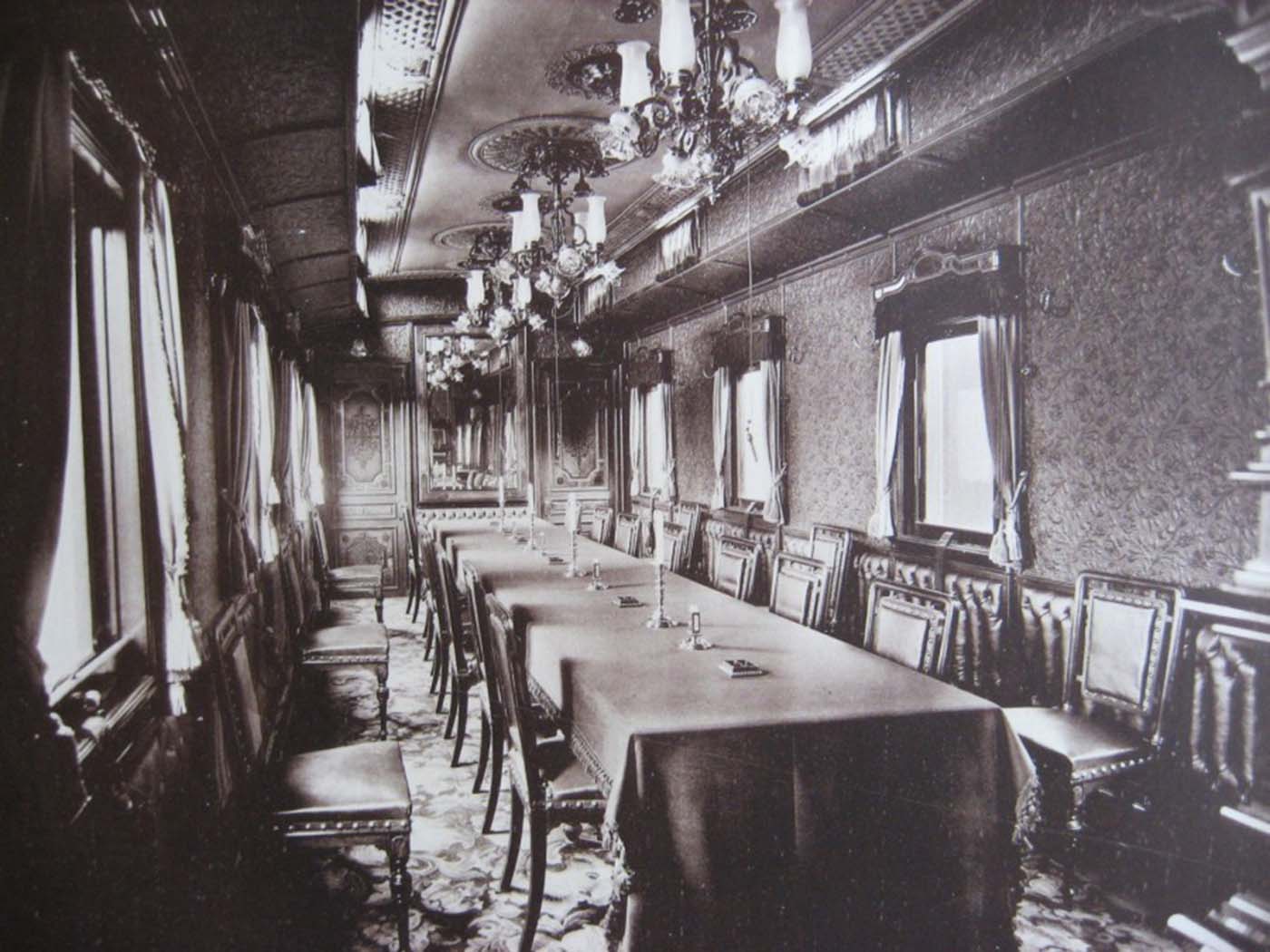 The Dining-Car on the Imperial Train. 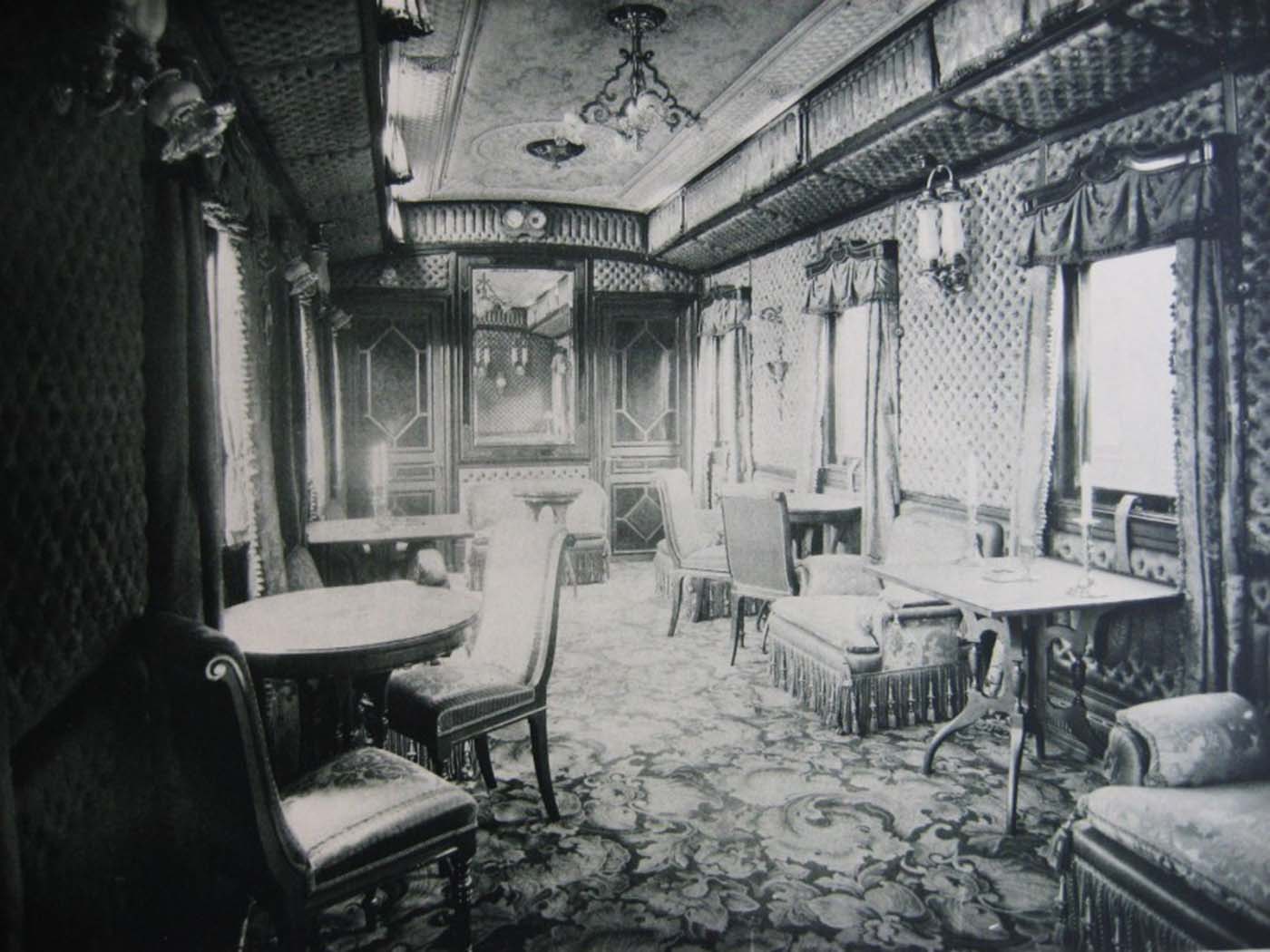 The saloon had soft mahogany furniture in the Art Nouveau style. The walls, sofas, armchairs and chairs were lined in striped pistachio curtains; a plush carpet on the floor had a checked design. 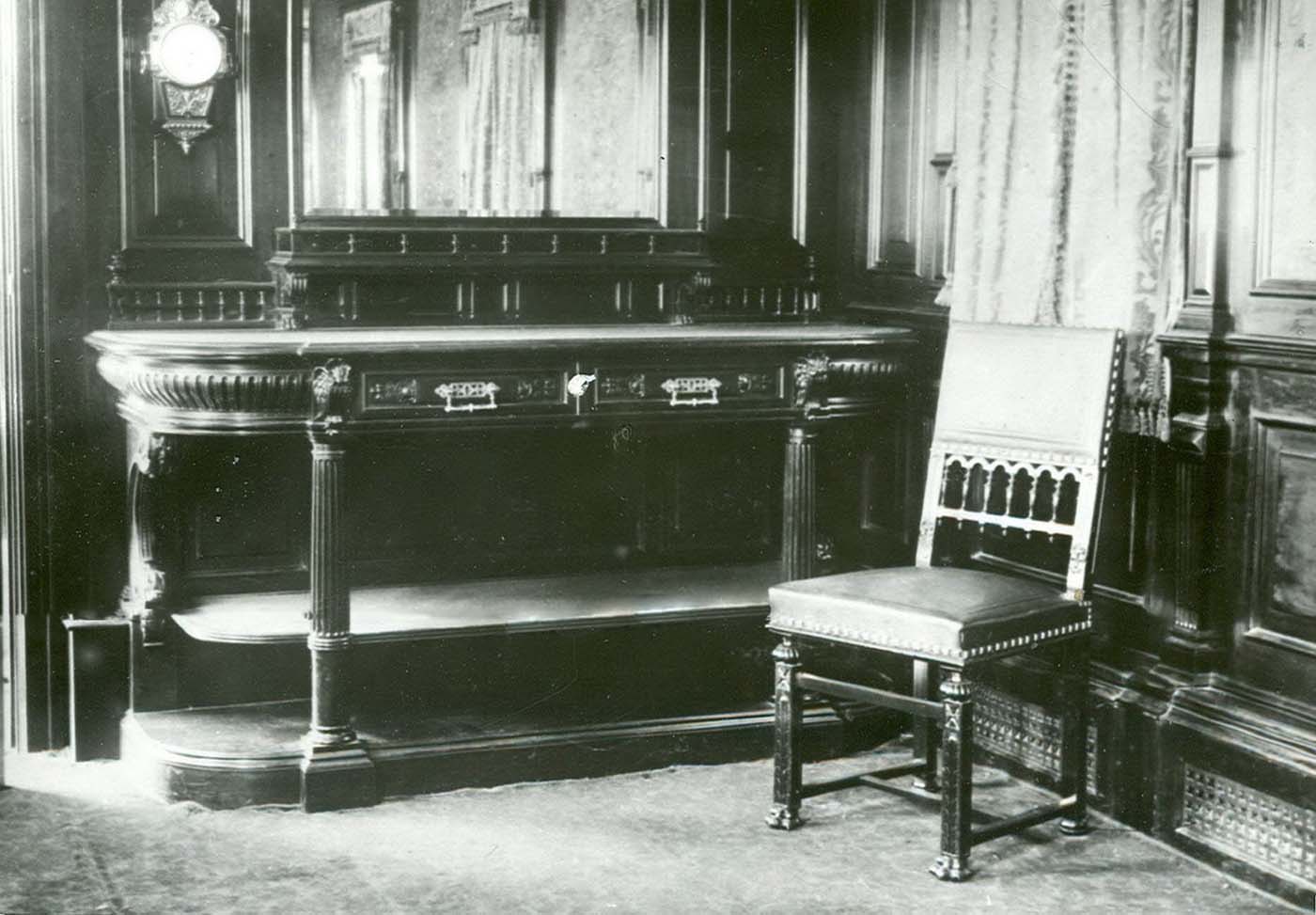 Part of the dining room on the train. 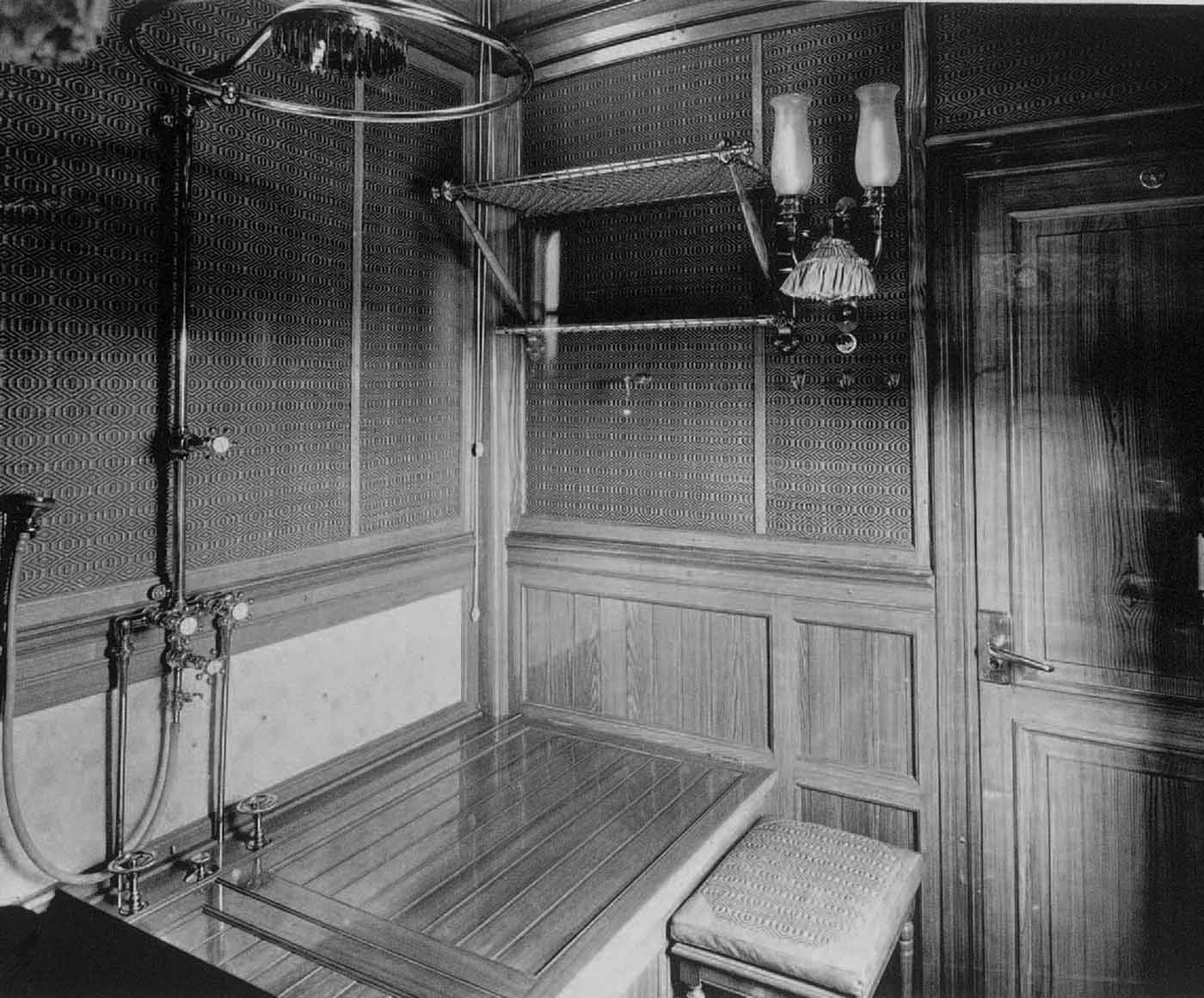 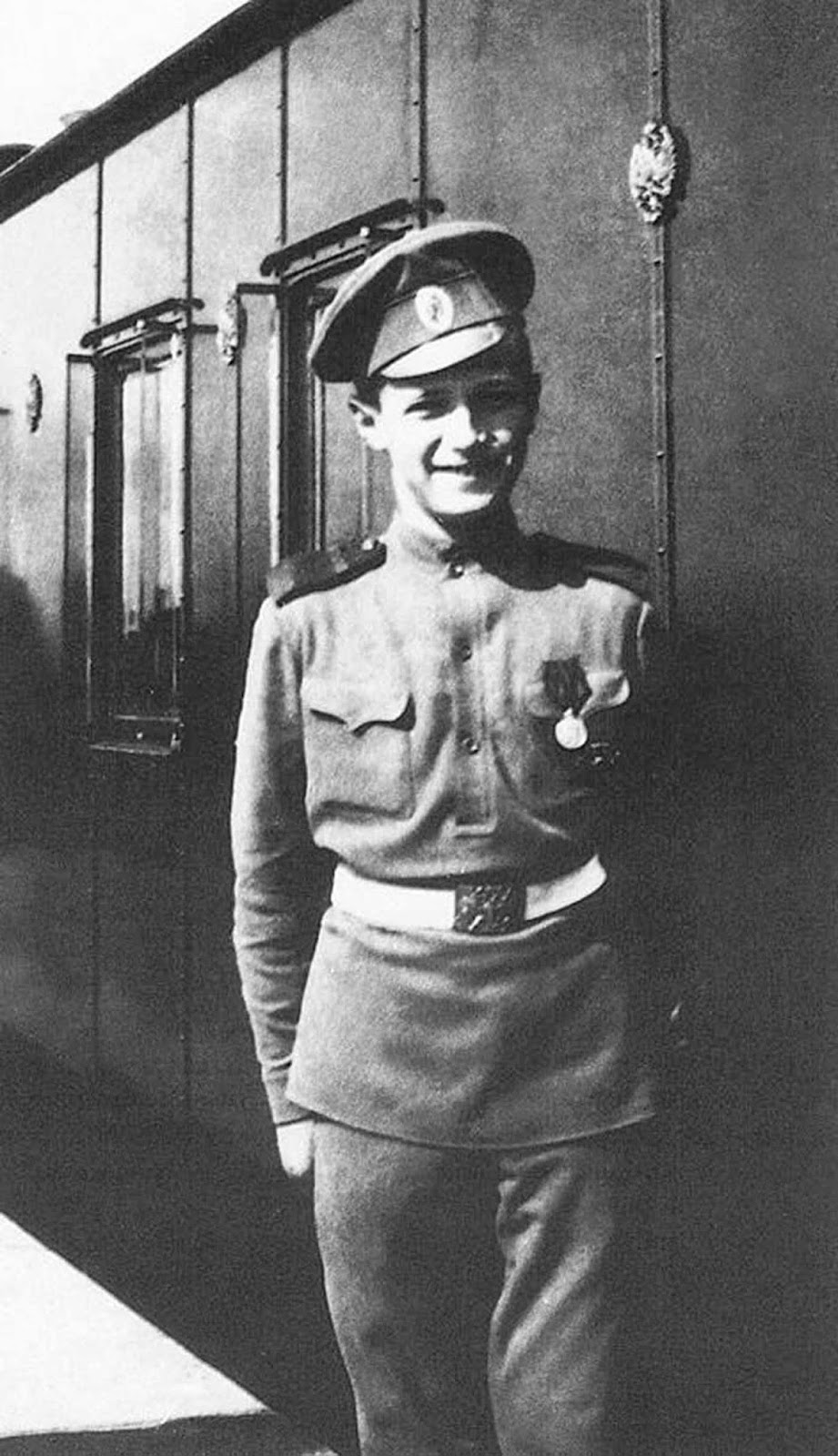 A smiling Tsesarevich Alexis standing on the platform in front of the Imperial Train. 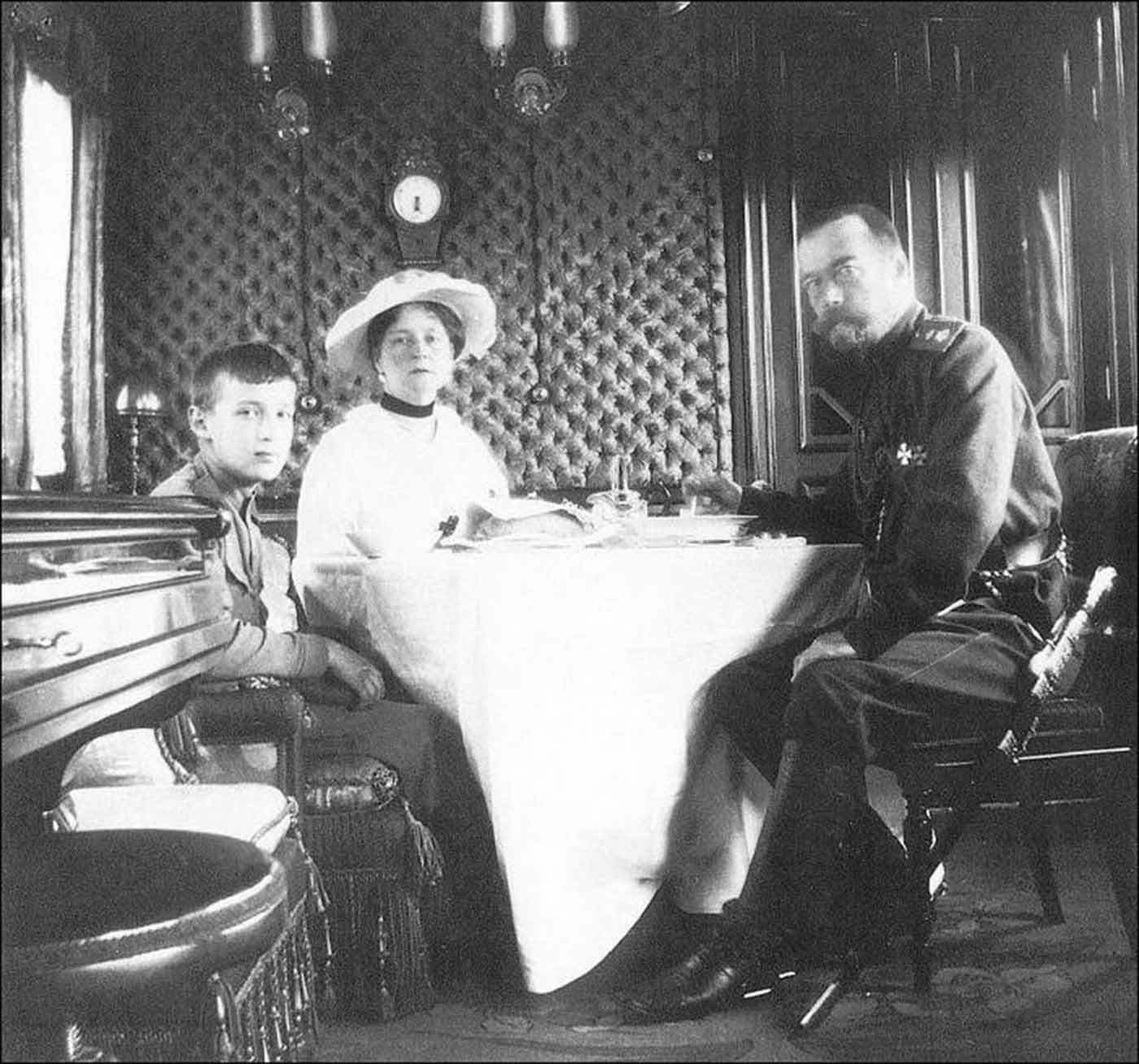