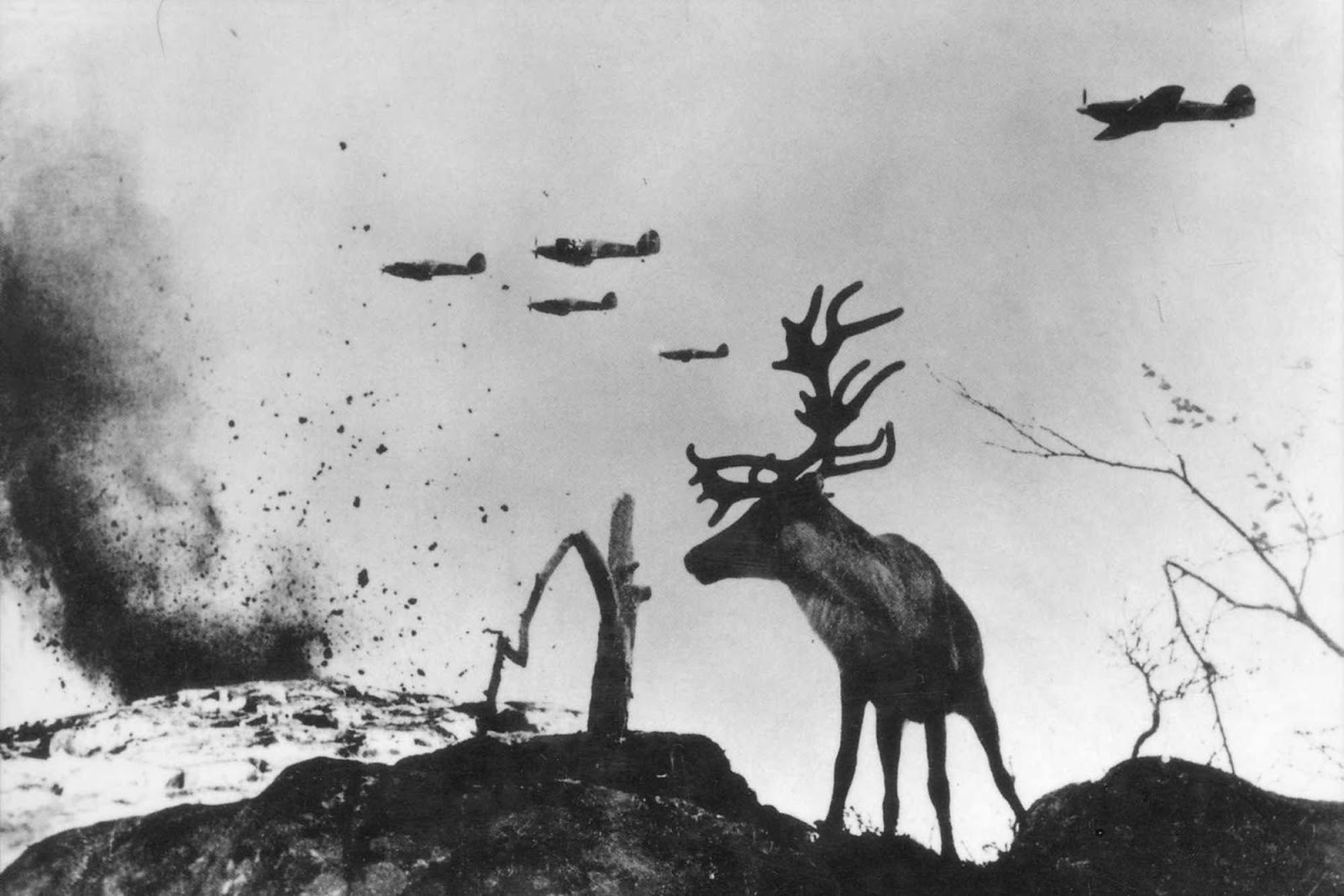 World War II planes bomb a hillside while a shellshocked reindeer looks on. The stark interface between the killing machines of man and the natural grandeur and beauty of the reindeer was not “natural”.

Yevgeny Khaldei, the famous Soviet photographer who took this photo, frequently staged or manipulated his photos to (as he defended the practice) enhance and strengthen the “truth” of the visual moment.

During one of the German air raids, Khaldei took the reindeer shot, but it wasn’t as dramatic as he assumed, so he later superimposed British Hawker Hurricanes, flown by RAF pilots to relieve Murmansk, and an exploding bomb to form a composite image.

Here’s the story of the reindeer photo, according to “Witness to History: The Photographs of Yevgeny Khaldei”, a 1997 book by Alexander and Alice Nakhimovsky:

One photograph that is a composite is Reindeer, Murmansk. Even while admitting this, Khaldei is insistent on the underlying veracity of his image. There “was” in fact a reindeer; it showed up during air raids. When he shows the photograph, Khaldei tells a story about it that roots in real life:

“During the bombings, a reindeer came out of the tundra. He wanted to be with people. They built him a shed to live in, and gave him a name, Yasha. Every time the alarm sounded, he ran to be with the soldiers–he didn’t want to be alone

. During one of the air raids, I took this shot. In 1944, when the battle for Murmansk was over, the soldiers didn’t know what to do with him. They loaded him into a truck and took him back to the tundra, thinking he would join the other deer. But he couldn’t understand what was happening. He ran after the truck as long as he could”.

Operation Silver Fox was a joint German–Finnish military operation offensive aiming to cut off and ultimately capture the key Soviet port at Murmansk through attacks from Finnish and Norwegian territory.

The operation had three stages. Operation Reindeer (Rentier) was the initial advance by German forces from Norway to secure the area around Petsamo and its valuable nickel mines.

Albeit the German-Finnish force was able to make some ground, Murmansk was neither cut off, nor taken, and continued to operate throughout the war.