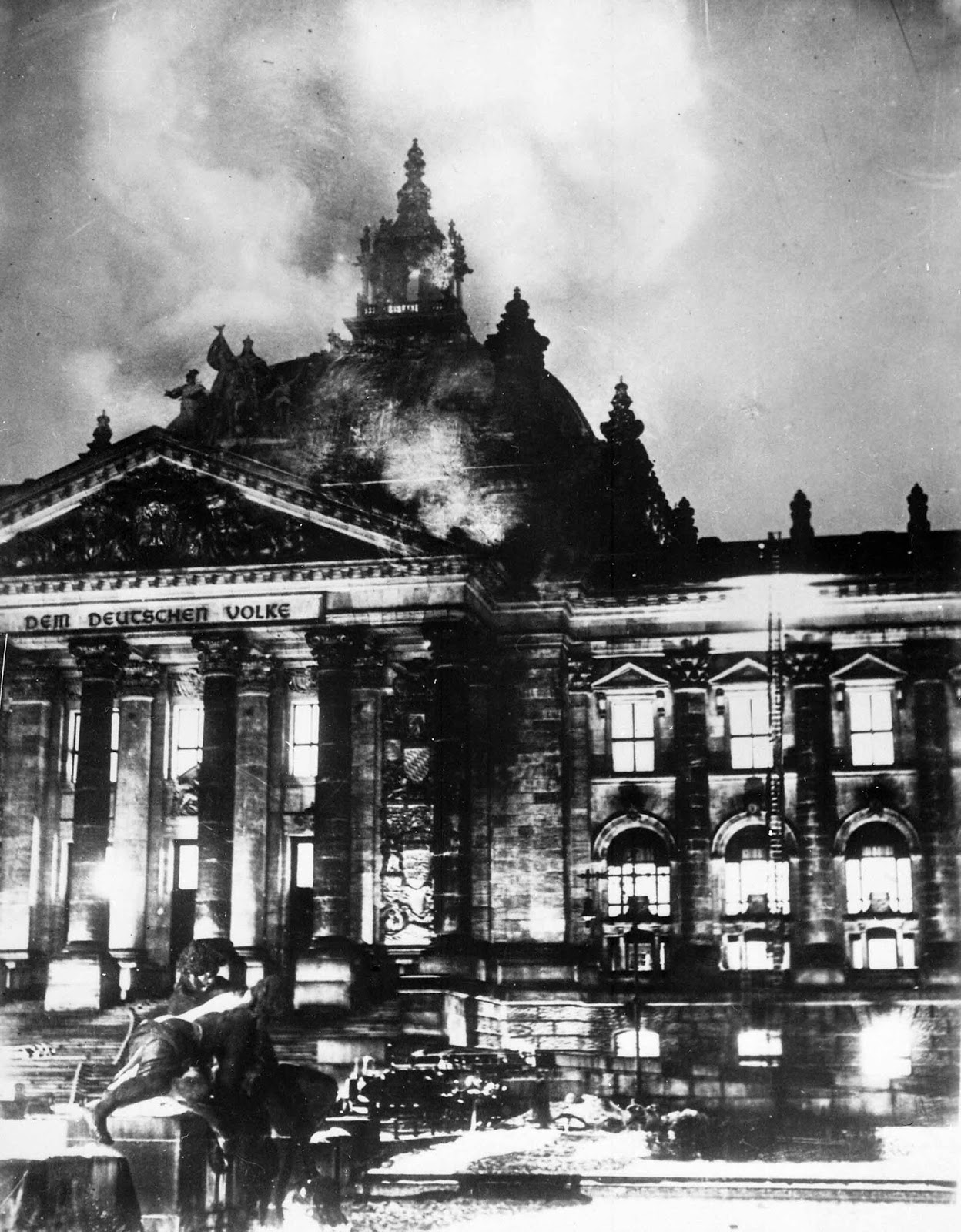 The Reichstag fire came amid “a campaign of unparalleled violence and bitterness” by then-Chancellor Adolf Hitler, in advance of an approaching German election, and it turned a building that was “as famous through Germany as is the dome of the Capitol in Washington among U. S. citizens” into “a glowing hodge-podge of incandescent girders”.

The fire started in the Reichstag building, the assembly location of the German Parliament. Shortly after 21:00 on 27 February 1933, the Berlin Fire Department received a message that the Reichstag was on fire.

Despite the best efforts of the firemen, most of the building was gutted by the blaze. By 23:30, the fire was put out. The firemen and police inspected the ruins and found twenty bundles of flammable material (firelighters) unburned lying about.

At the time the fire was reported, Adolf Hitler was having dinner with Joseph Goebbels at Goebbels’ apartment in Berlin. When Goebbels received an urgent phone call informing him of the fire, he regarded it as a “tall tale” at first and hung up. Only after the second call did he report the news to Hitler. 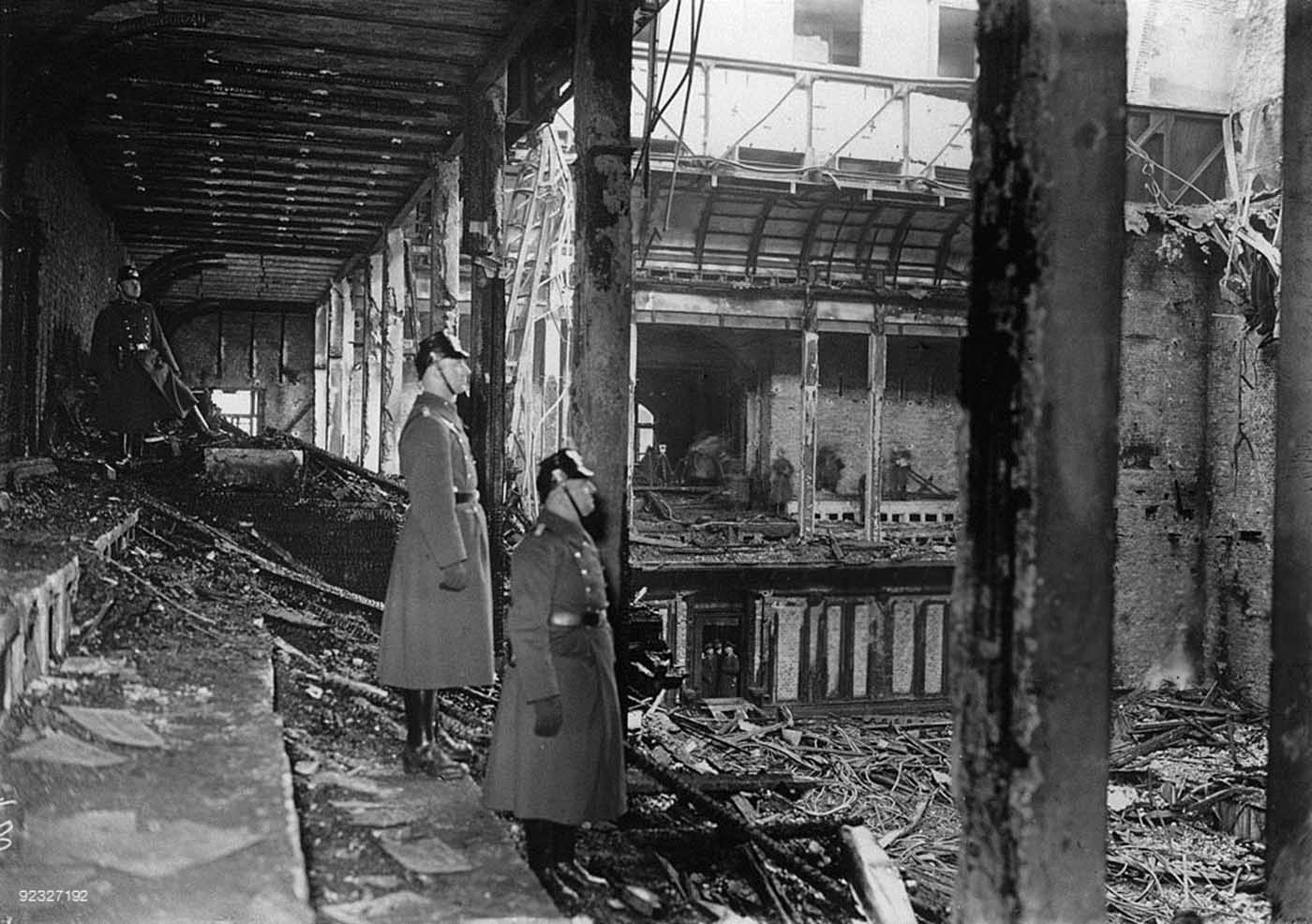 The burned down plenary sessions hall of the Reichstag.

Both left Goebbels’ apartment and arrived by car at the Reichstag, just as the fire was being put out. They were met at the site by Hermann Göring who told Hitler: “This is Communist outrage! One of the Communist culprits has been arrested”. Hitler called the fire a “sign from God” and claimed it was a Fanal (signal) meant to mark the beginning of a Communist Putsch (revolt).

The next day, the Preussische Pressedienst (Prussian Press Service) reported that “this act of incendiarism is the most monstrous act of terrorism carried out by Bolshevism in Germany”.

The Vossische Zeitung newspaper warned its readers that “the government is of the opinion that the situation is such that a danger to the state and nation existed and still exists”. 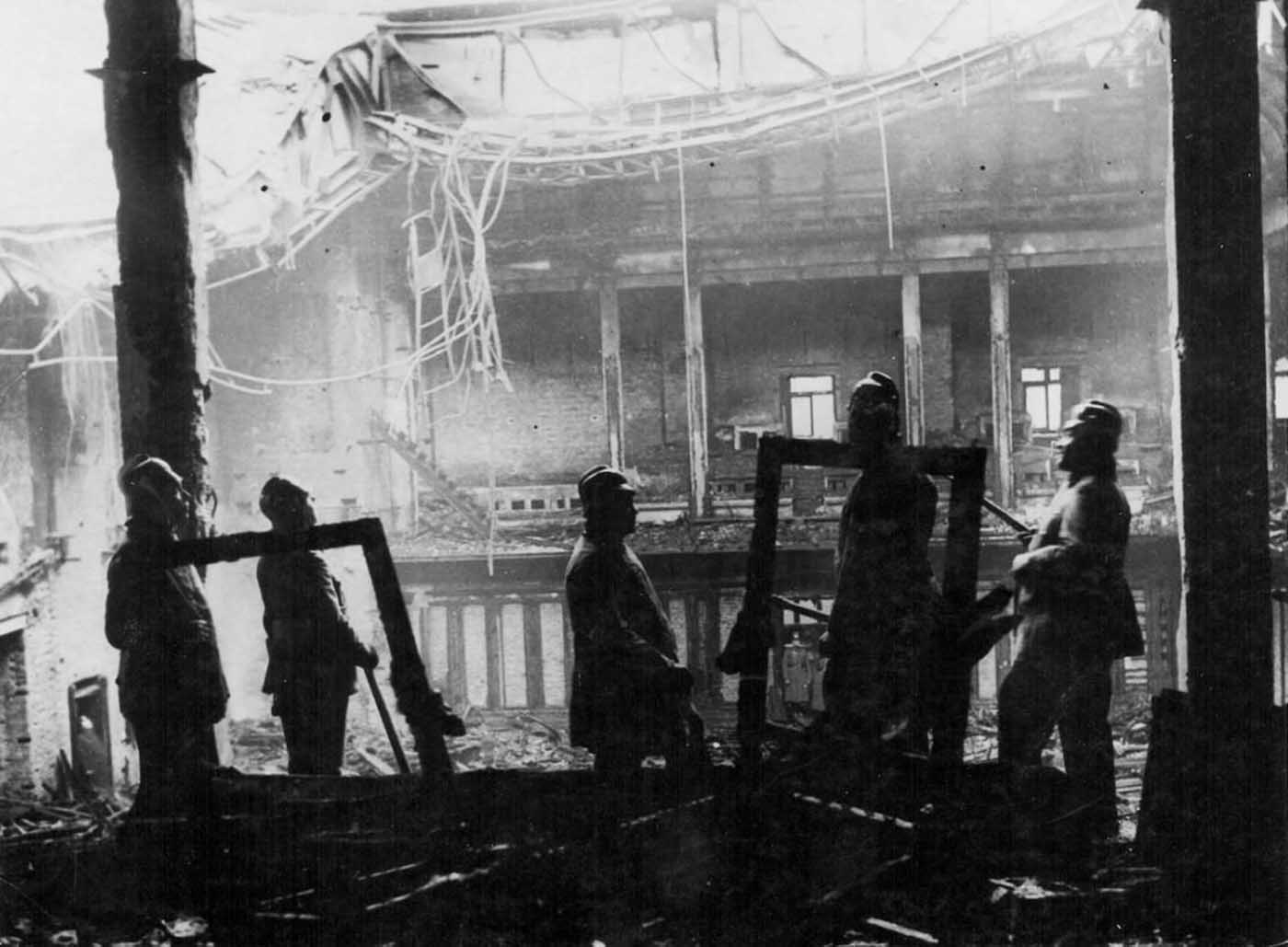 In his verdict, Judge Bürger was careful to underline his belief that there had in fact been a Communist conspiracy to burn down the Reichstag, but declared, with the exception of Van der Lubbe, there was insufficient evidence to connect the accused to the fire or the alleged conspiracy.

Only Van der Lubbe was found guilty and sentenced to death. The rest were acquitted and were expelled to the Soviet Union, where they received a heroic welcome. V

ar der Lubbe was beheaded by guillotine (the customary form of execution in Saxony at the time; it was by axe in the rest of Germany) on 10 January 1934, three days before his 25th birthday.

Var der Lubbe was beheaded by guillotine (the customary form of execution in Saxony at the time; it was by axe in the rest of Germany) on 10 January 1934, three days before his 25th birthday.

The day after the fire Hitler asked for and received from President Hindenburg the Reichstag Fire Decree, signed into law by Hindenburg using Article 48 of the Weimar Constitution.

The Reichstag Fire Decree suspended most civil liberties in Germany, including habeas corpus, freedom of expression, freedom of the press, the right of free association and public assembly, the secrecy of the post and telephone. These rights were not reinstated during the Nazi reign. The decree was used by the Nazis to ban publications not considered “friendly” to the Nazi cause.

Thousands of Communists were imprisoned in the days following the fire (including leaders of the Communist Party of Germany) on the charge that the Party was preparing to stage a putsch.

With Communist electoral participation also suppressed (the Communists previously polled 17% of the vote), the Nazis were able to increase their share of the vote in the 5 March 1933, Reichstag elections from 33% to 44%. This gave the Nazis and their allies, the German National People’s Party (who won 8% of the vote), a majority of 52% in the Reichstag.

The responsibility for the Reichstag fire remains an ongoing topic of debate and research. According to Ian Kershaw, writing in 1998, the consensus of nearly all historians is that Van der Lubbe did set the Reichstag on fire.

Although Van der Lubbe was certainly an arsonist and clearly played a role, there has been considerable popular and scientific debate over whether he acted alone; the case is still discussed.

Kershaw, in Hitler 1889–1936: “Hubris, says it is generally believed today that Van der Lubbe acted alone and that the Reichstag fire was merely a stroke of good luck for the Nazis.

It is alleged that the idea he was a “half-wit” or “mentally disturbed” was propaganda spread by the Dutch Communist Party, to distance themselves from an insurrectionist anti-fascist, who was once a member of the party and took action where they failed to do so.

Hans Mommsen concluded that the Nazi leadership was in a state of panic on the night of the Reichstag fire and they seemed to regard the fire as confirmation that a Communist revolution was as imminent as they said it was”.

The term “Reichstag fire” is used by some writers to denote a calamitous event staged by a political movement, orchestrated in a manner that casts blame on their opponents, thus causing the opponents to be viewed with suspicion by the general public.

This is sometimes known as a false flag attack when the event itself is caused by proponents of a political movement to falsely accuse their opponents.