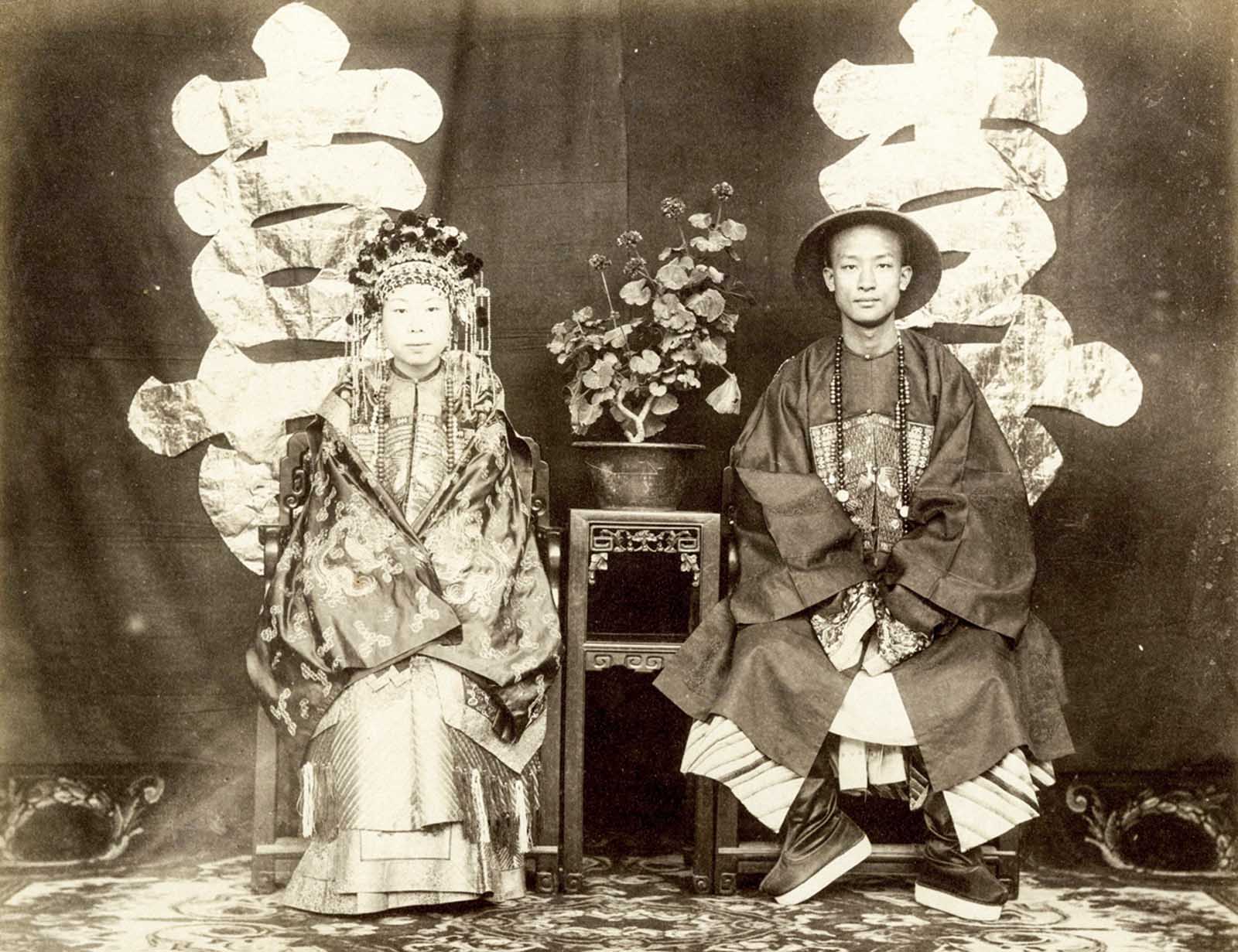 The wedding portrait of Zeng Jifen and Nie ji Gui, who were only recently identified. The bride is the daughter of Marquis Zeng Guofan, a high-ranking Chinese official during the Qing dynasty.

These photographs of Peking, now known as Beijing, taken by Thomas Child in the 1870s and 1880s are a window of the old China. In May of 1870, Thomas Child was hired by the Imperial Maritime Customs Service to be a gas engineer in Peking (Beijing).

The 29-year-old Englishman left behind his wife and three children to become one of roughly 100 foreigners living in the late Qing dynasty’s capital, taking his camera along with him.

Unlike his contemporary photographers, Child chose to remain in China rather than return home and publish his photographs for instant renown.

This meant that his own works went somewhat under the radar; it also means, however, that as a fluent Mandarin speaker and known resident in Peking, Child was able to get access to events and people his contemporaries were not.

Over the course of the next 20 years, he took some 200 photographs, capturing the earliest comprehensive catalog of the customs, architecture, and people during China’s last dynasty. 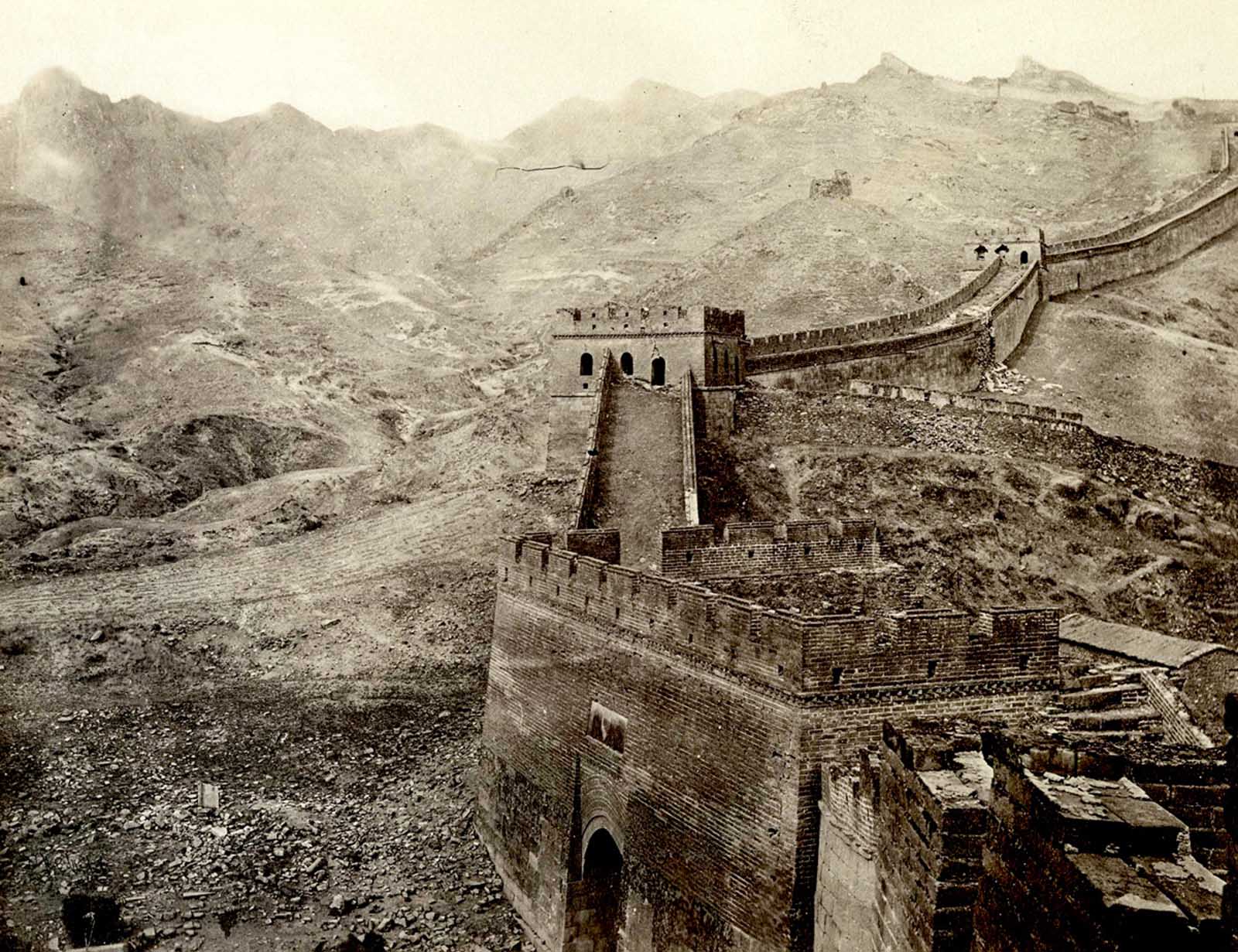 A photograph showing the section of the Great Wall that includes the Nankou pass leading to Mongolia.

He documented the practice of dismantling palace walls damaged by decay or war and recycling the stones for other construction. In his captions, letters, and journals he complained about dirty streets, insects, and rat infestations.

He gently mocked local superstitions, the sound of temple bells that rang in “harmonious discord” and funeral rituals that “excel in pomp and expenditure”.

In 1889, Thomas Child returned to England. He remained infatuated with China, and he gave his family home at the outskirts of London a Chinese name that has been roughly translated as Studio of Everlasting Tranquillity. He was killed in 1898 when his horse-drawn carriage overturned. His family kept some of his paperwork, but few other records survive. 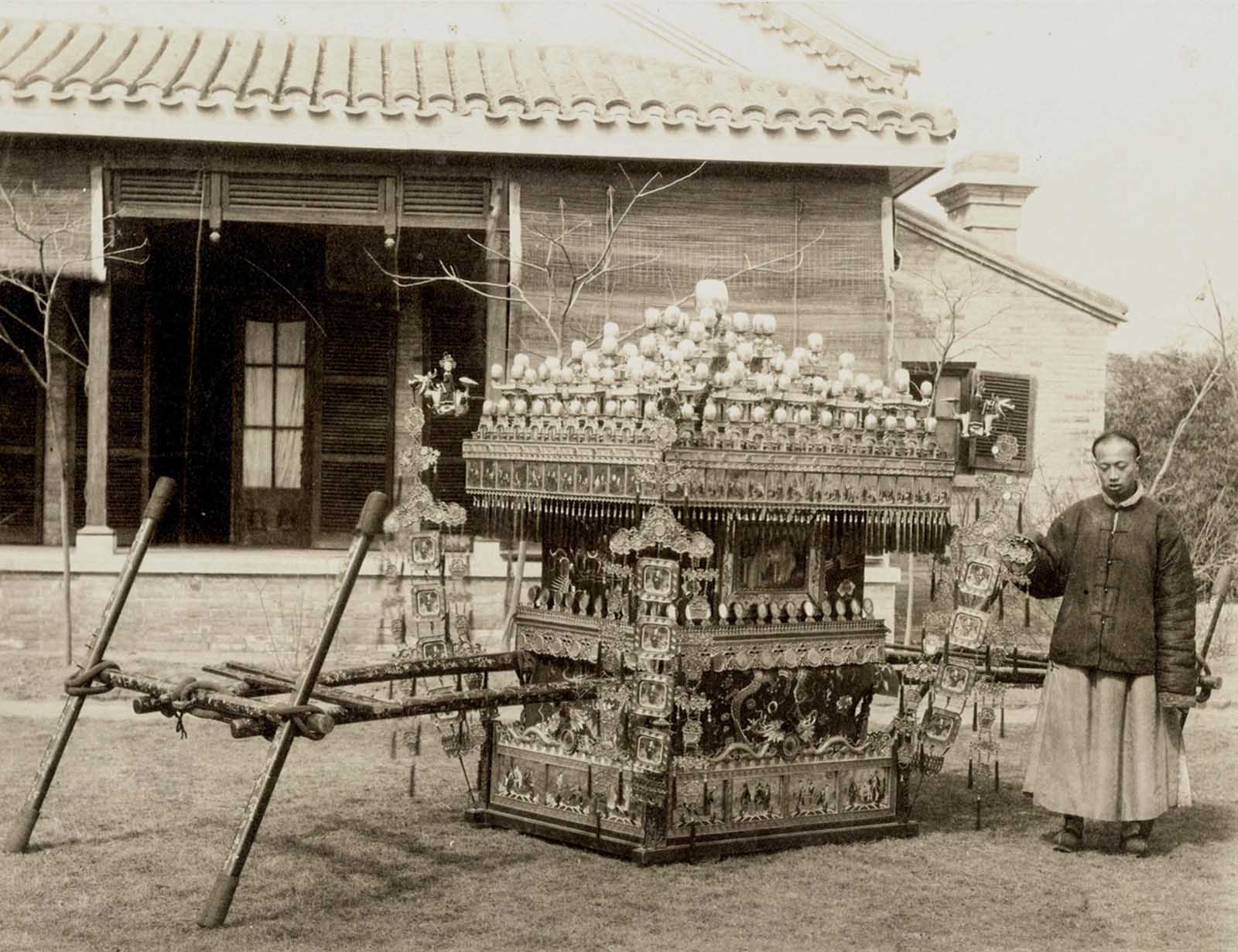 A photograph of a traditional bridal sedan chair, which would carry a bride to her wedding. The journey in the chair is meant to represent the bride’s transition from one family to another. 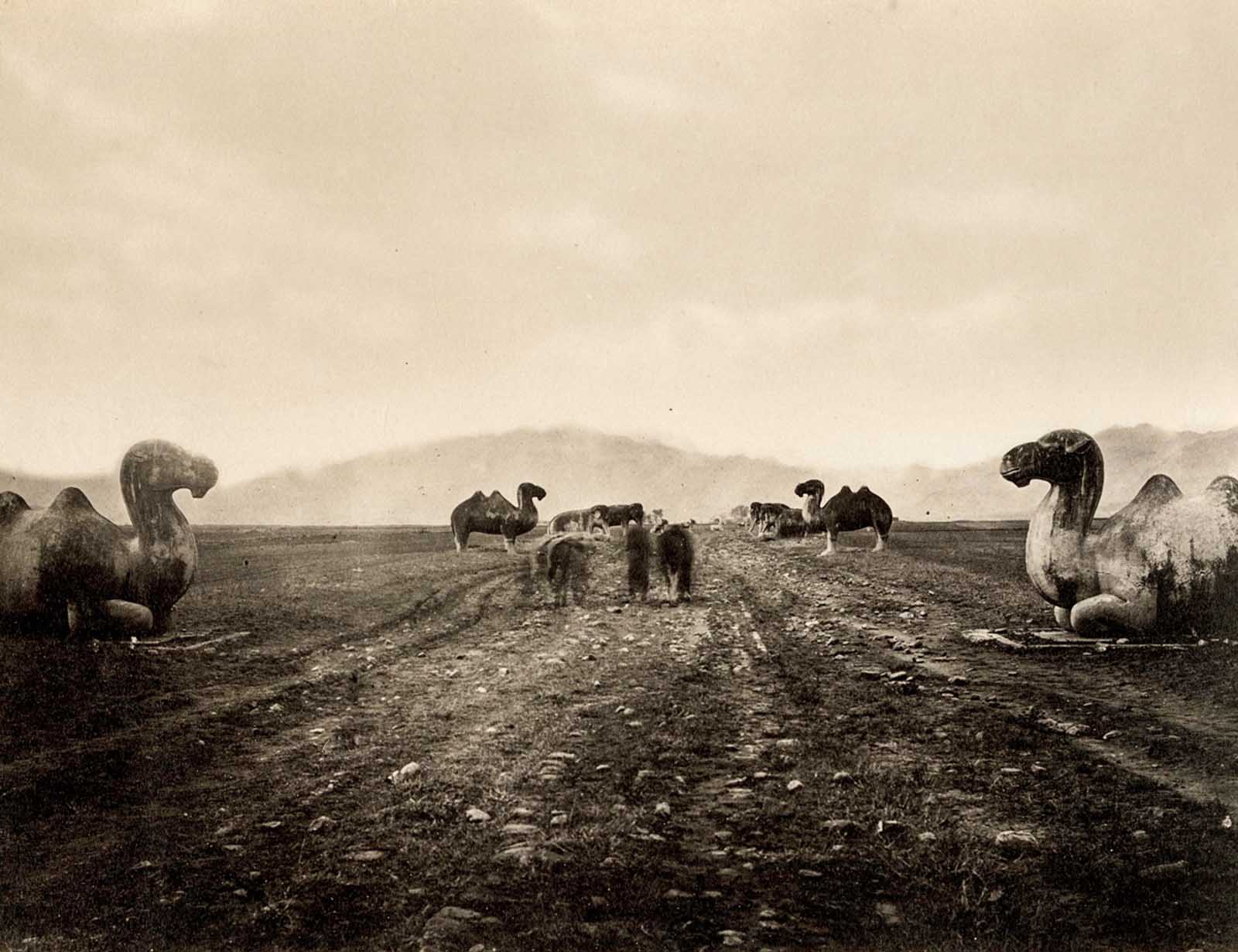 A view of Spirit Way at the Imperial Tombs outside Peking. The avenue was lined with 24 stone animal figures, 12 standing and 12 recumbent, symbolizing the road leading to heaven. 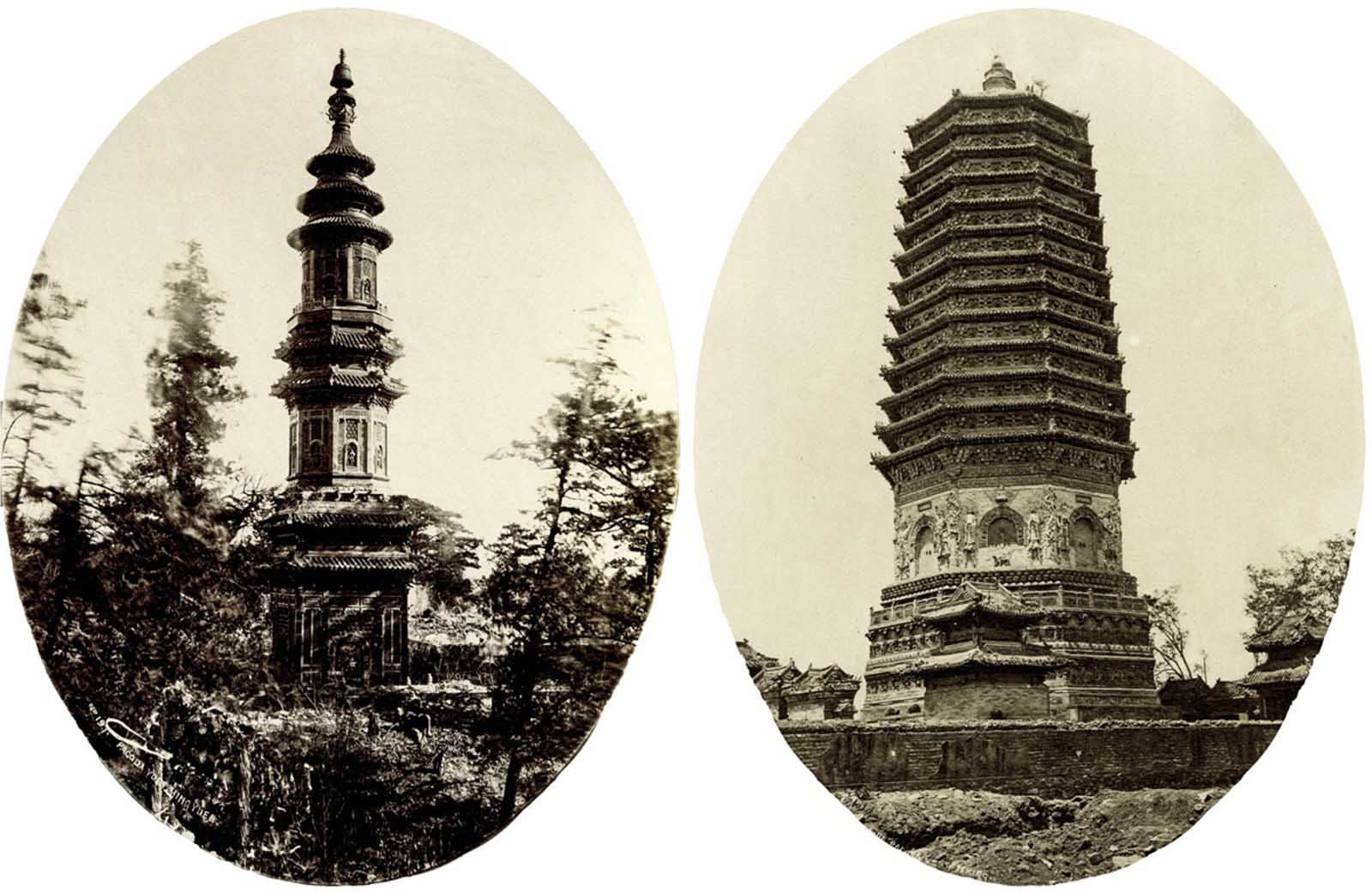 Left: A view of the Fragrant Hills Pagoda, which was part of the Grand Zongjing Monastery. The pagoda is embellished with glazed tiles of yellow, green, purple, and blue. Right: The 12th-century pagoda of Tianning Temple, standing a few miles from the west gate of the city. It is one of the oldest buildings in the capital. Like many other Liao dynasty pagodas, the structure is solid. A sealed underground chamber holds Buddhist relics, statues, and sutras placed when the pagoda was built. 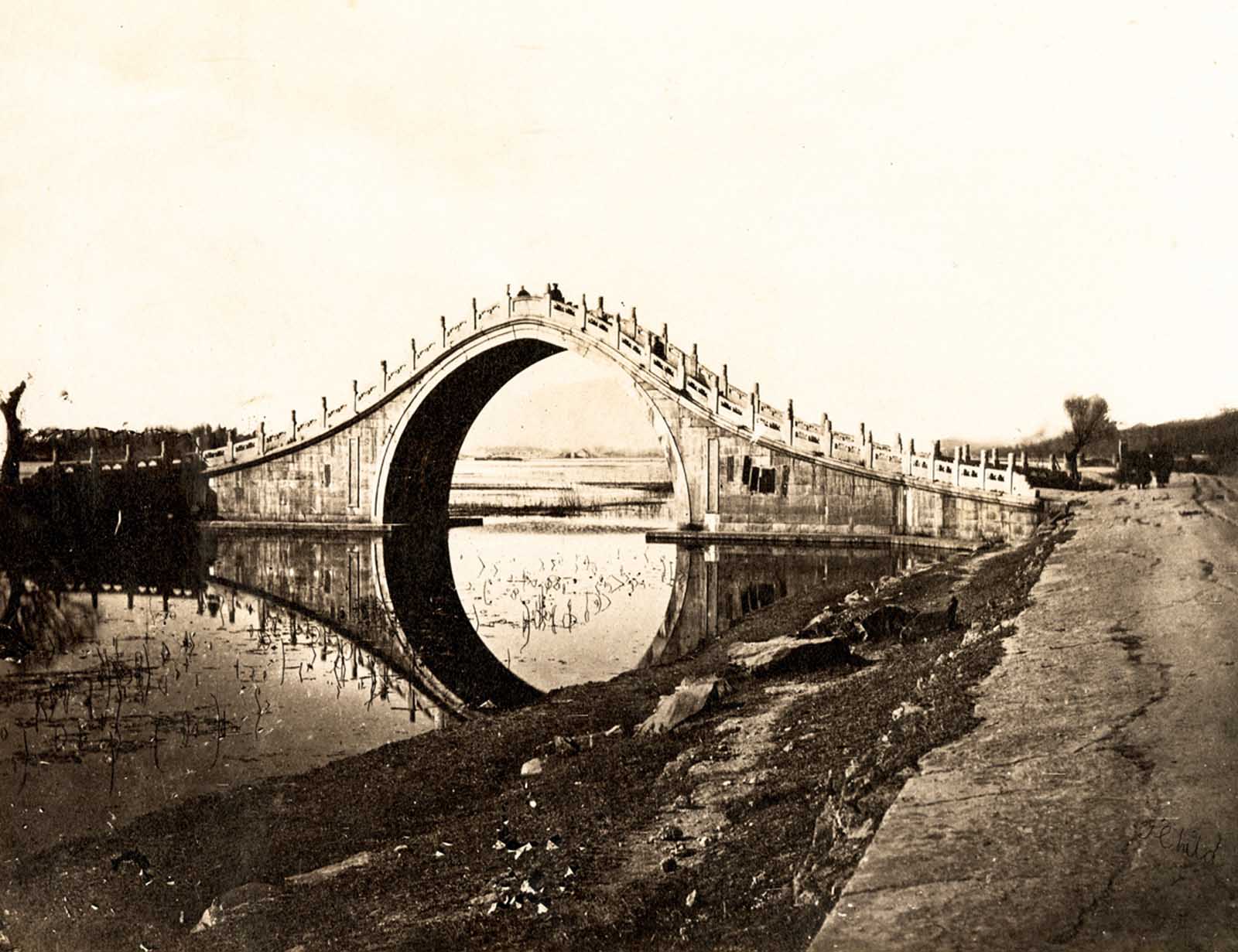 A view of Jade Belt Bridge, which still stands on the grounds of the Summer Palace on the western shore of Kunming Lake. The arched bridge, a traditional Chinese design, permitted passage of the Emperor’s dragon boat. 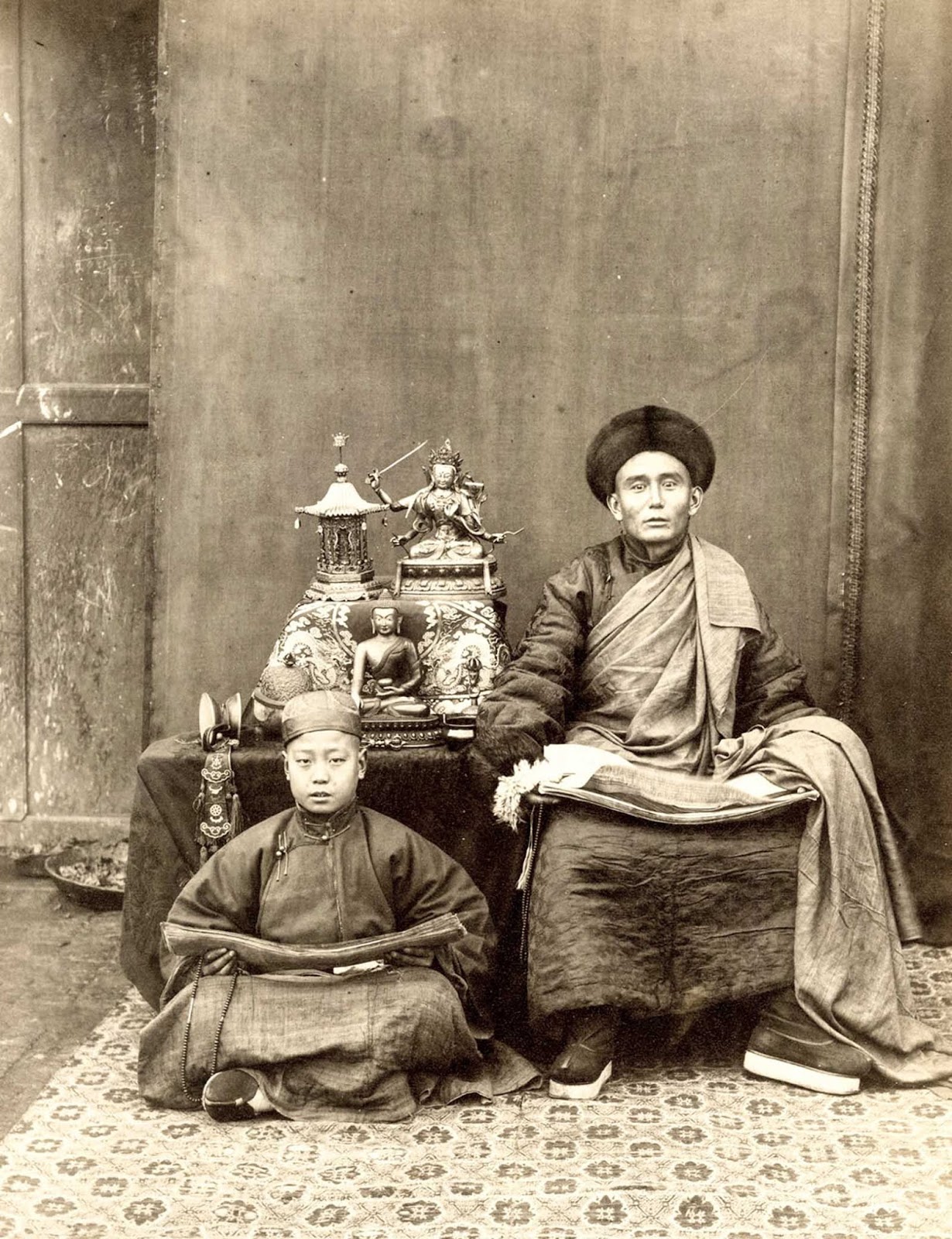 An image of a “lama,” or Tibetan Buddhist monk, and his pupil. Both subjects hold prayer beads and bundles of “sutras,” or scripture, in their laps. On the table behind them are bronze sculptures and sacred Tibetan ritual objects, including a skull cup with a bronze Buddha and a statue of Manjusri. This is one of the earliest photographic portraits of a religious figure in Peking. 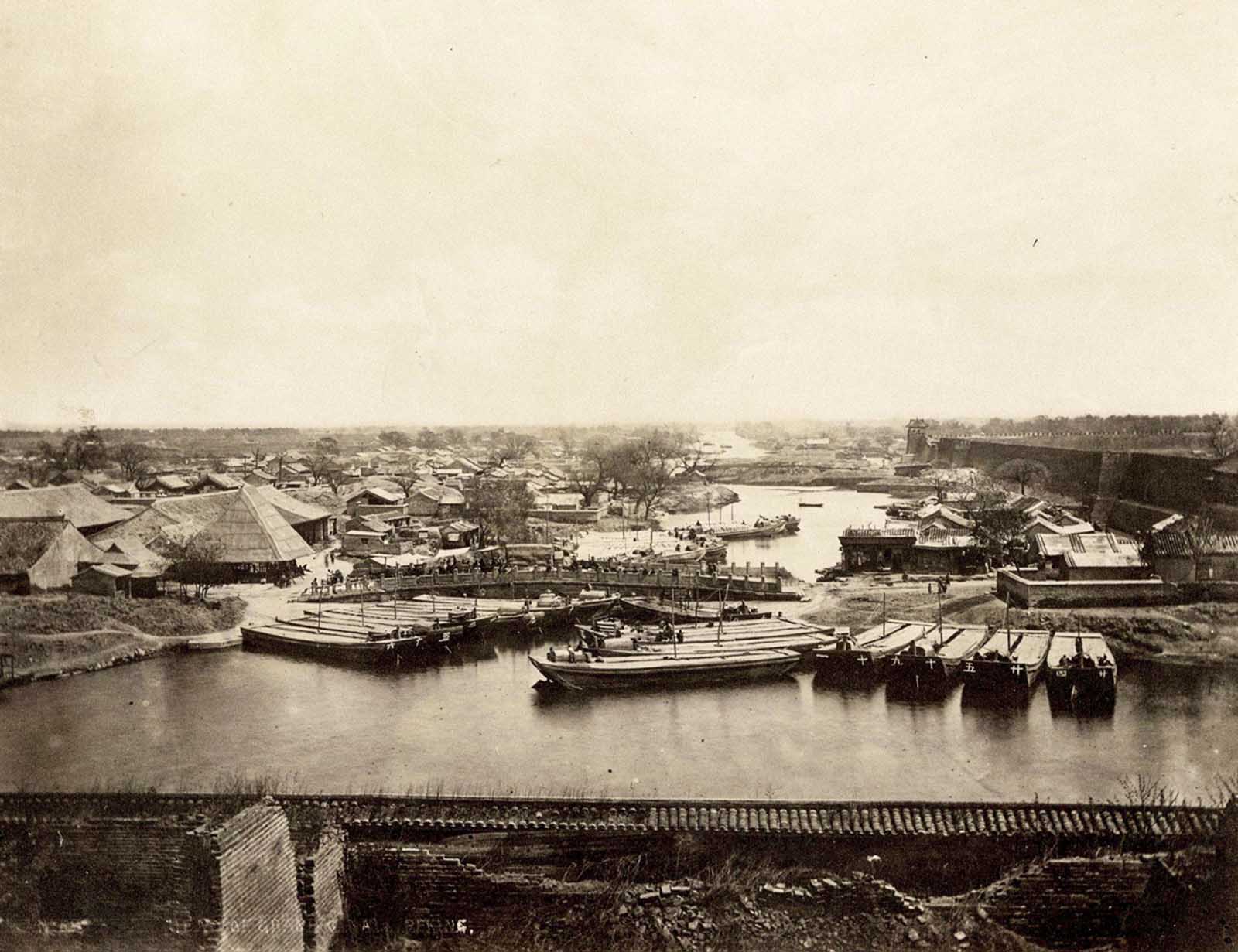 A view of the Grand Canal, the most important canal in Peking. Throughout the Qing dynasty the waterway was crucial for the transport of grain and other commodities to Peking, connecting northern and southern China. 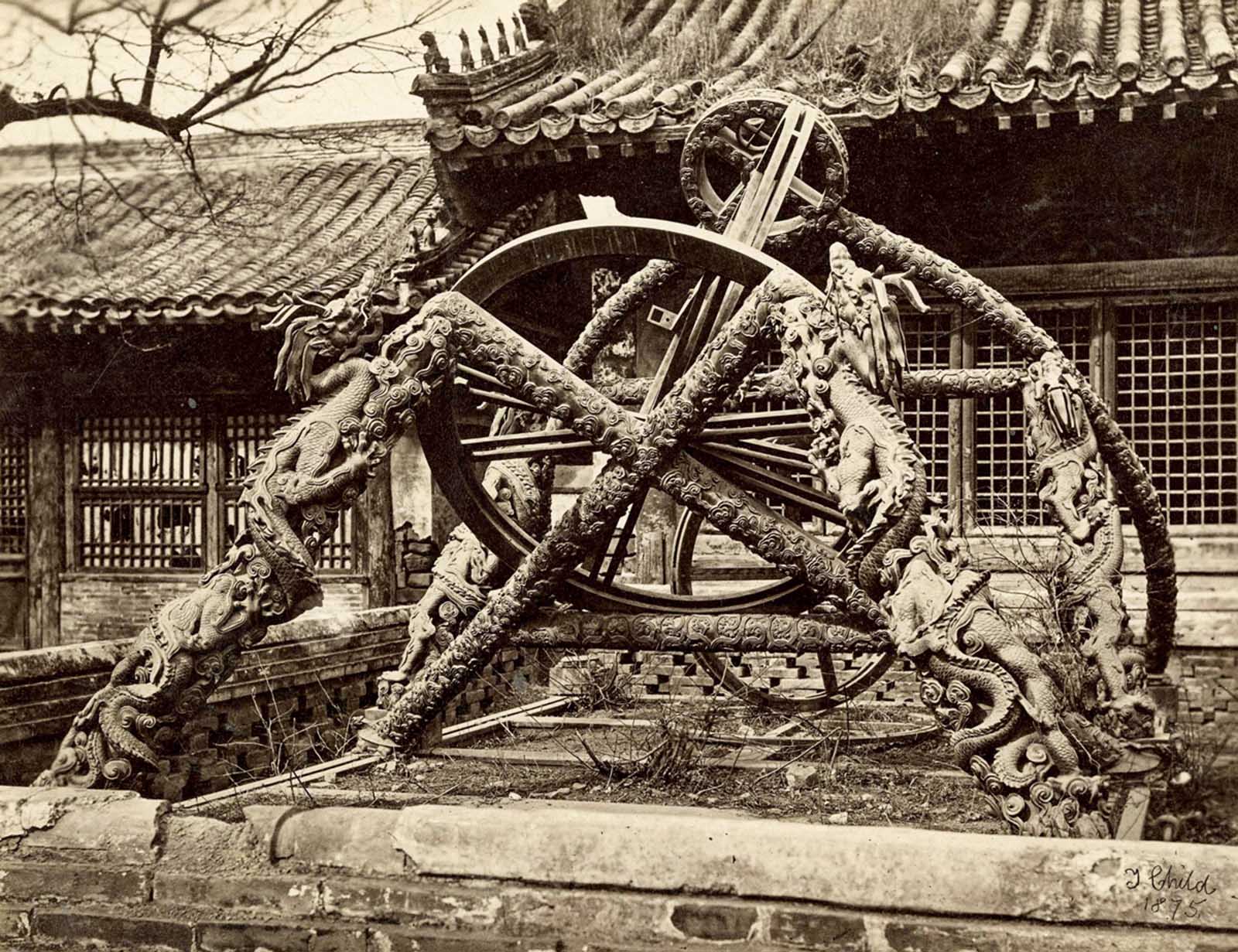 A view of a bronze instrument at The Imperial Astronomical Observatory. The location is a pretelescopic research center built during the Ming dynasty and expanded during the Qing dynasty. 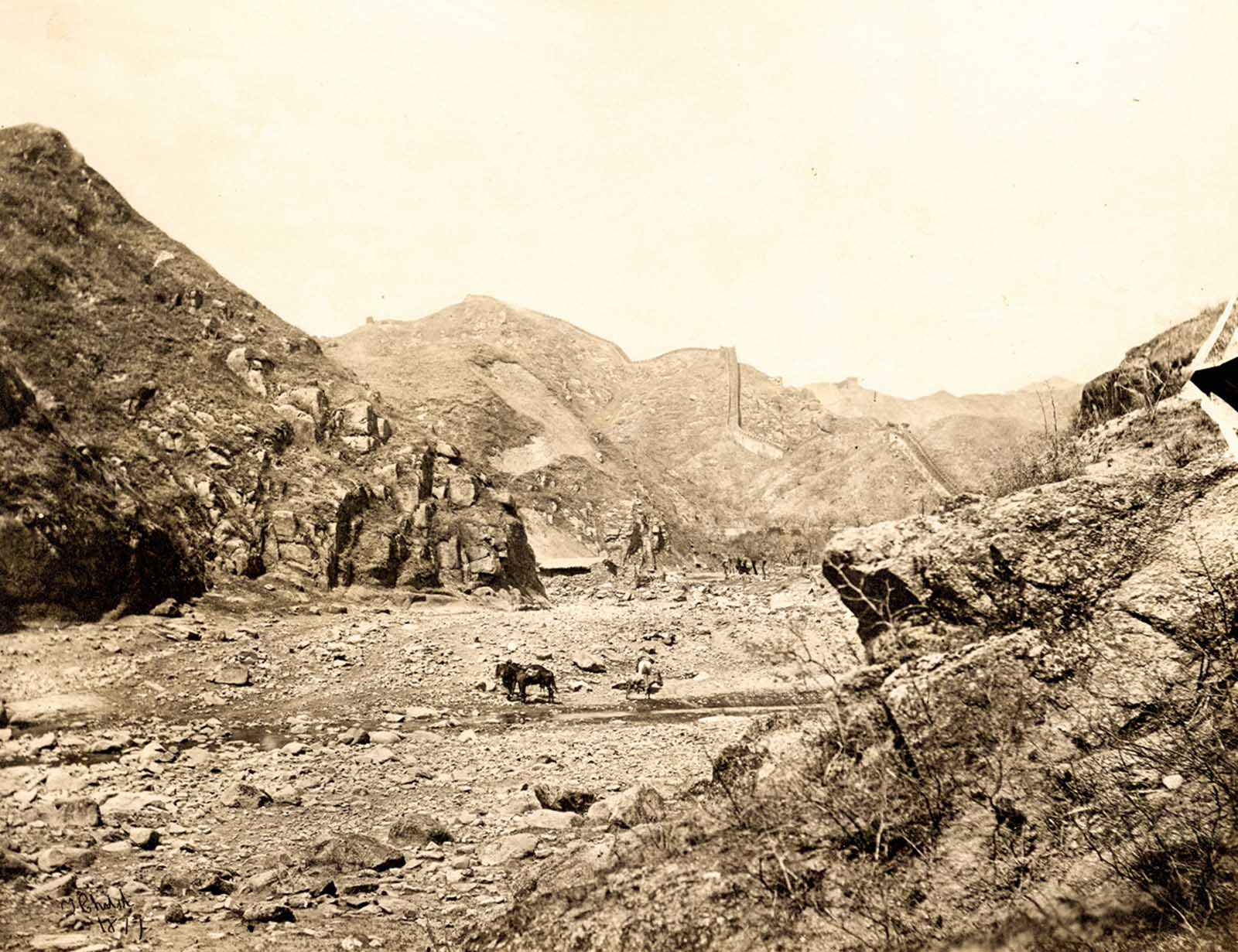 A view of the terrain 19th-century travelers faced when journeying to the Great Wall of China. During his travels, Child traversed this region with his fragile photographic equipment and glass plate negatives. 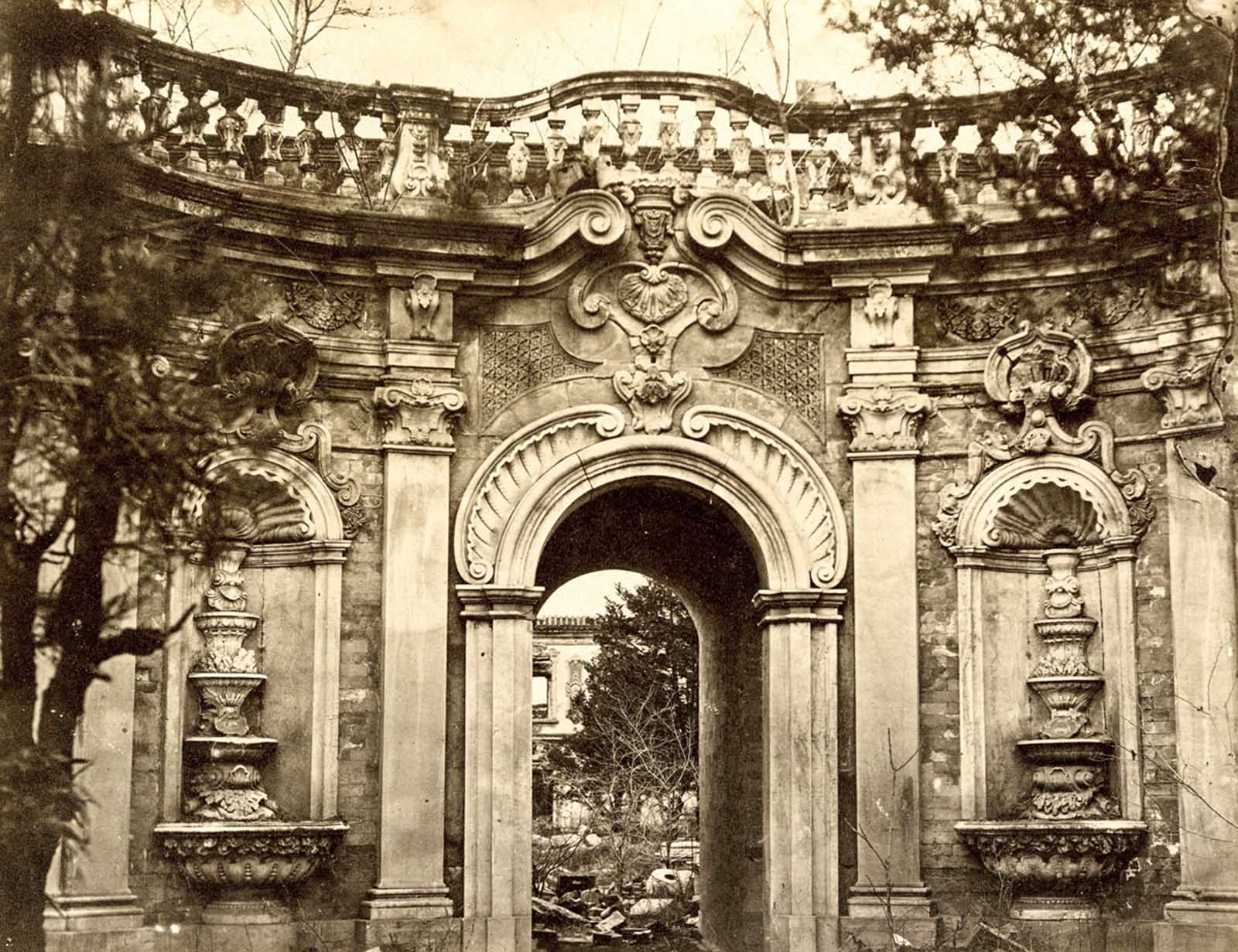 A view of the Fountain Gate in Yuan Ming Yuan, or the Garden of Perfect Brightness. Beginning in 1709, the Qing emperor Kangxi began the construction of this garden retreat, which was modeled on the grand palaces, gardens, and fountains of Europe. Much of Yuan Ming Yuan was destroyed in the Second Opium War. 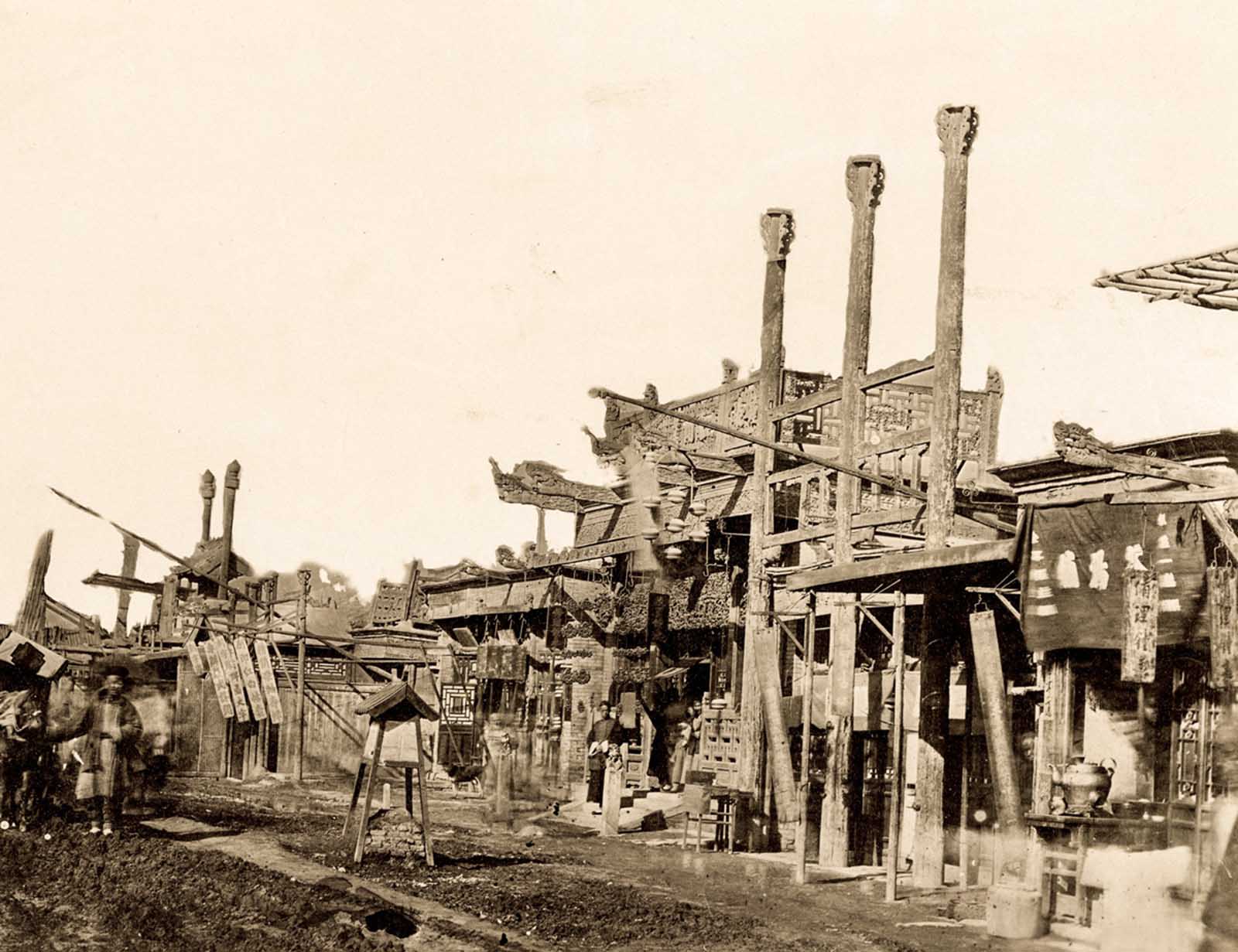 A view of a street in Peking. 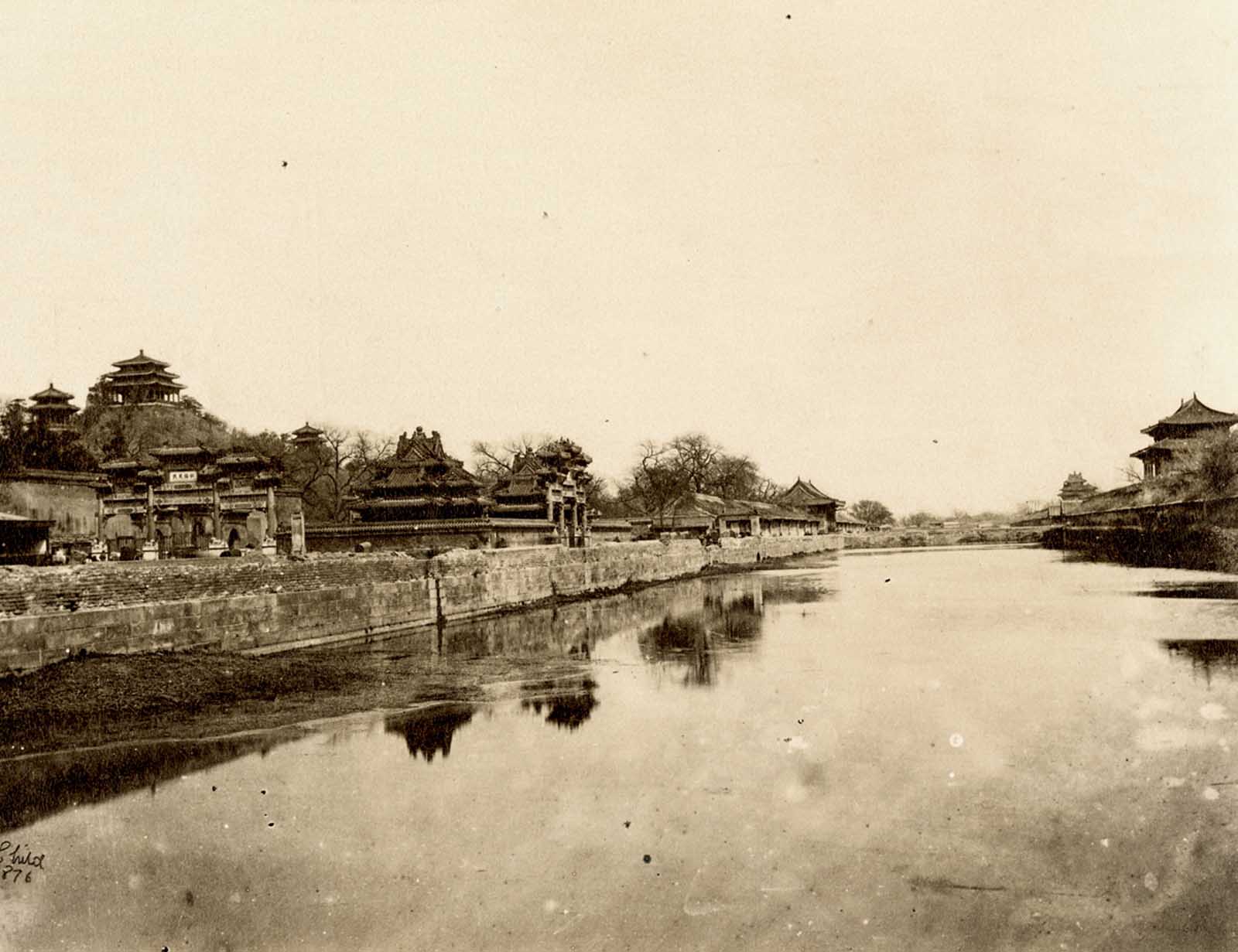 A view of the Forbidden City from across an imperial moat. This photograph shows 15th and 16th-century Chinese fortification systems which do not exist today. 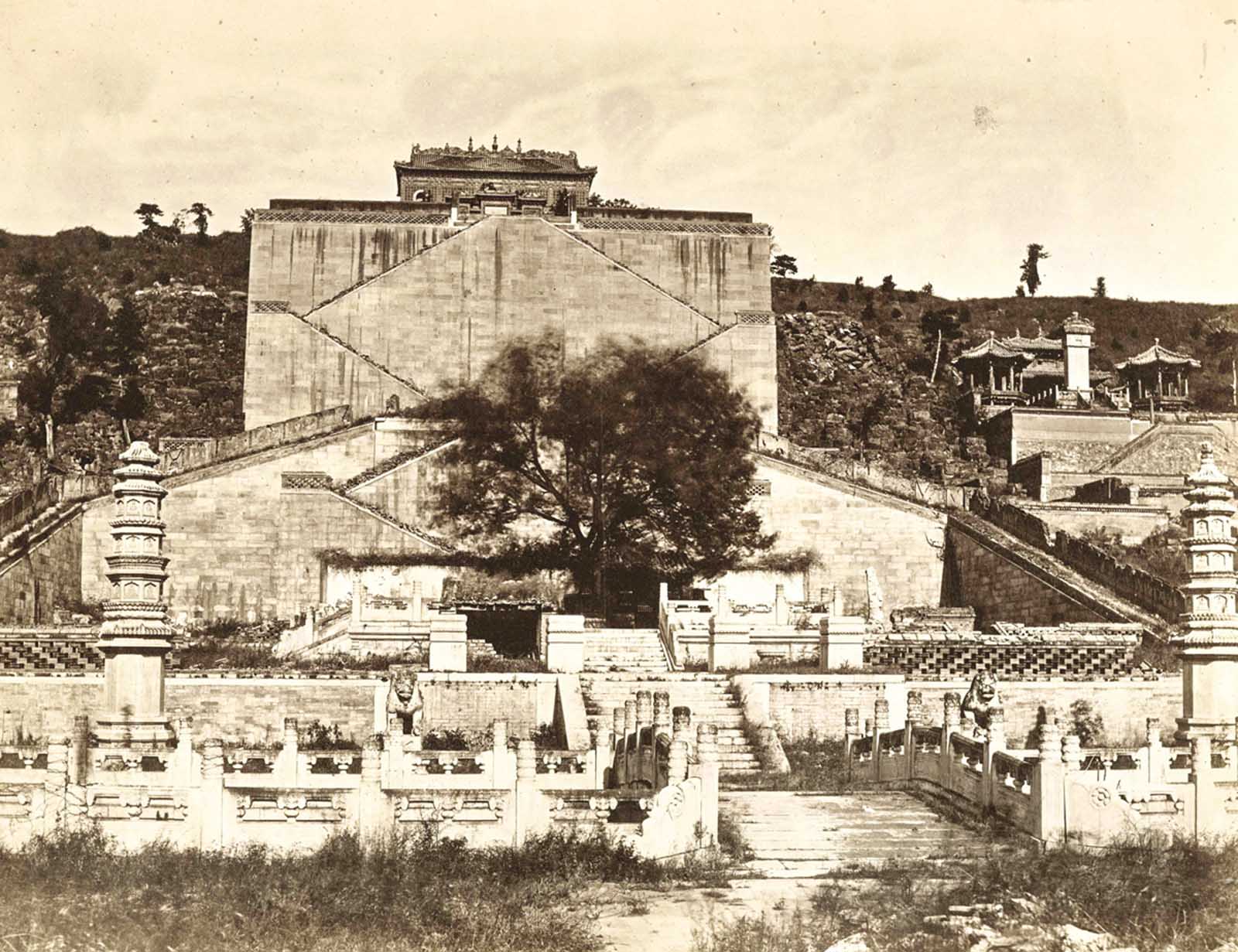 The front view of Wan Shou Shan, or Longevity Hill, on the grounds of the Summer Palace. 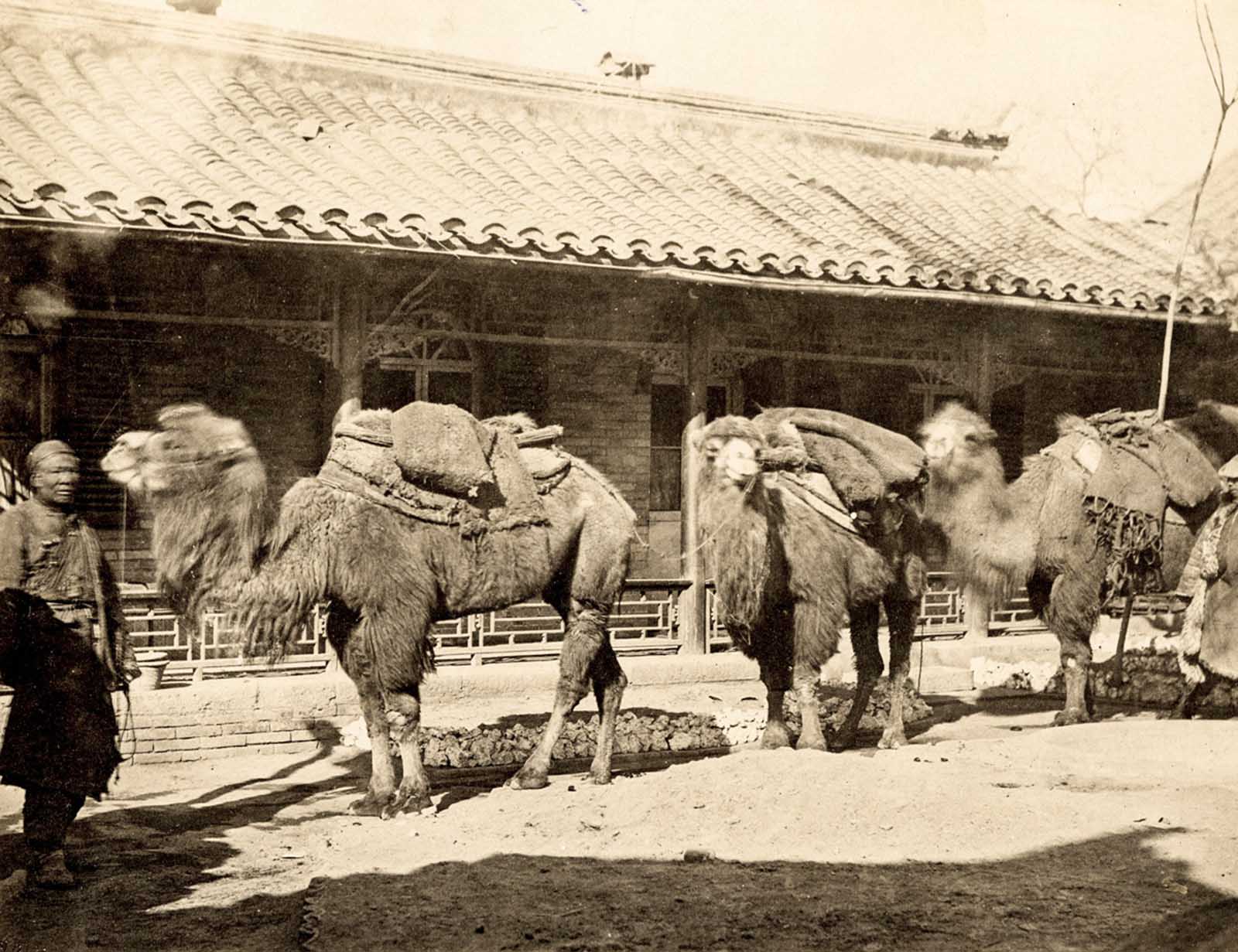 A view of 19th-century travelers and their camels on the Silk Road in China. The Bactrian camels, distinguished by their double humps, were used to “carry coal and lime into the City from the Western Hills, and merchandise between Peking and Mongolia,” according to Child. 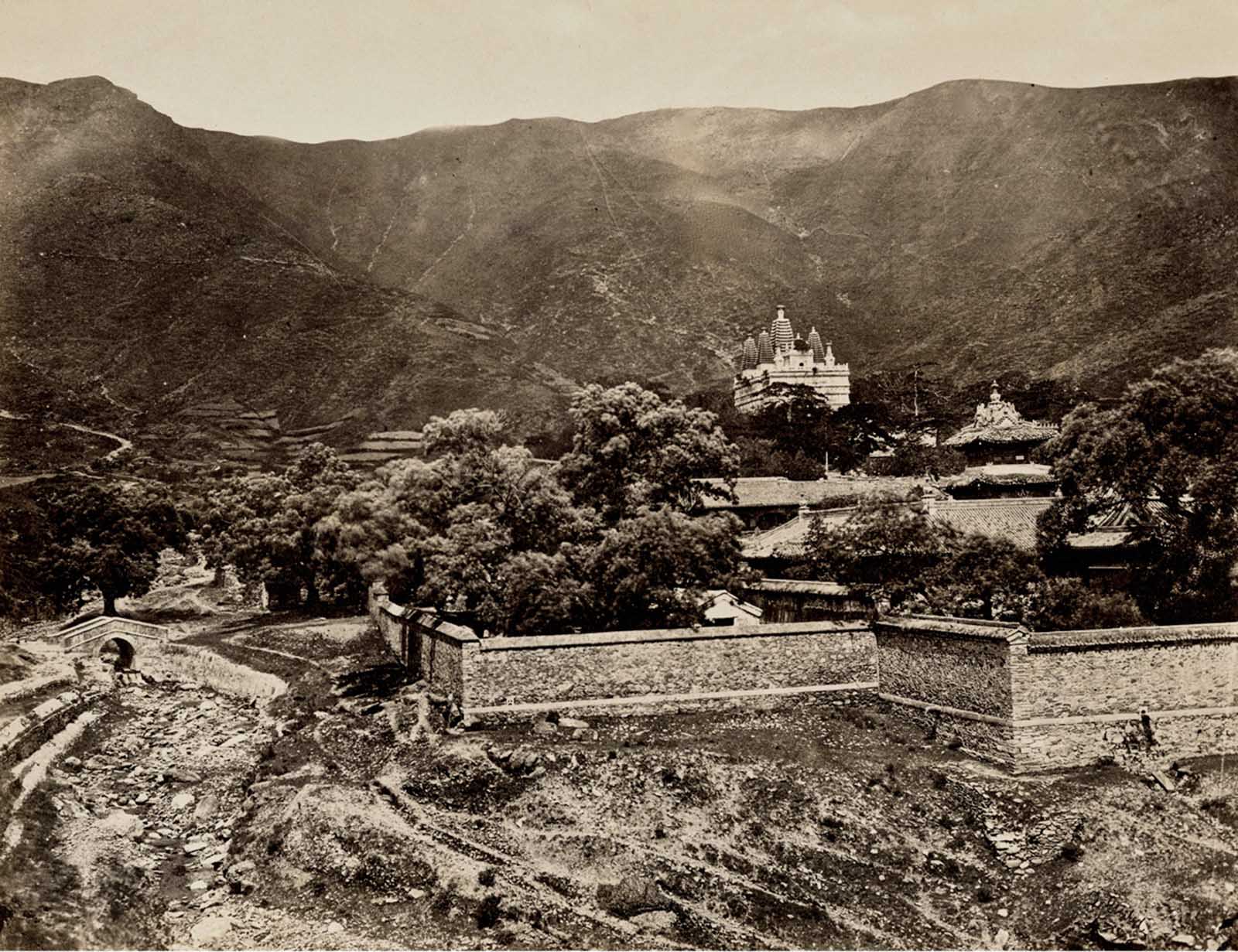 This is the only known photograph of the grounds of Azure Cloud Temple. The wooden buildings surrounding the diamond throne pagoda were destroyed during the Boxer War. 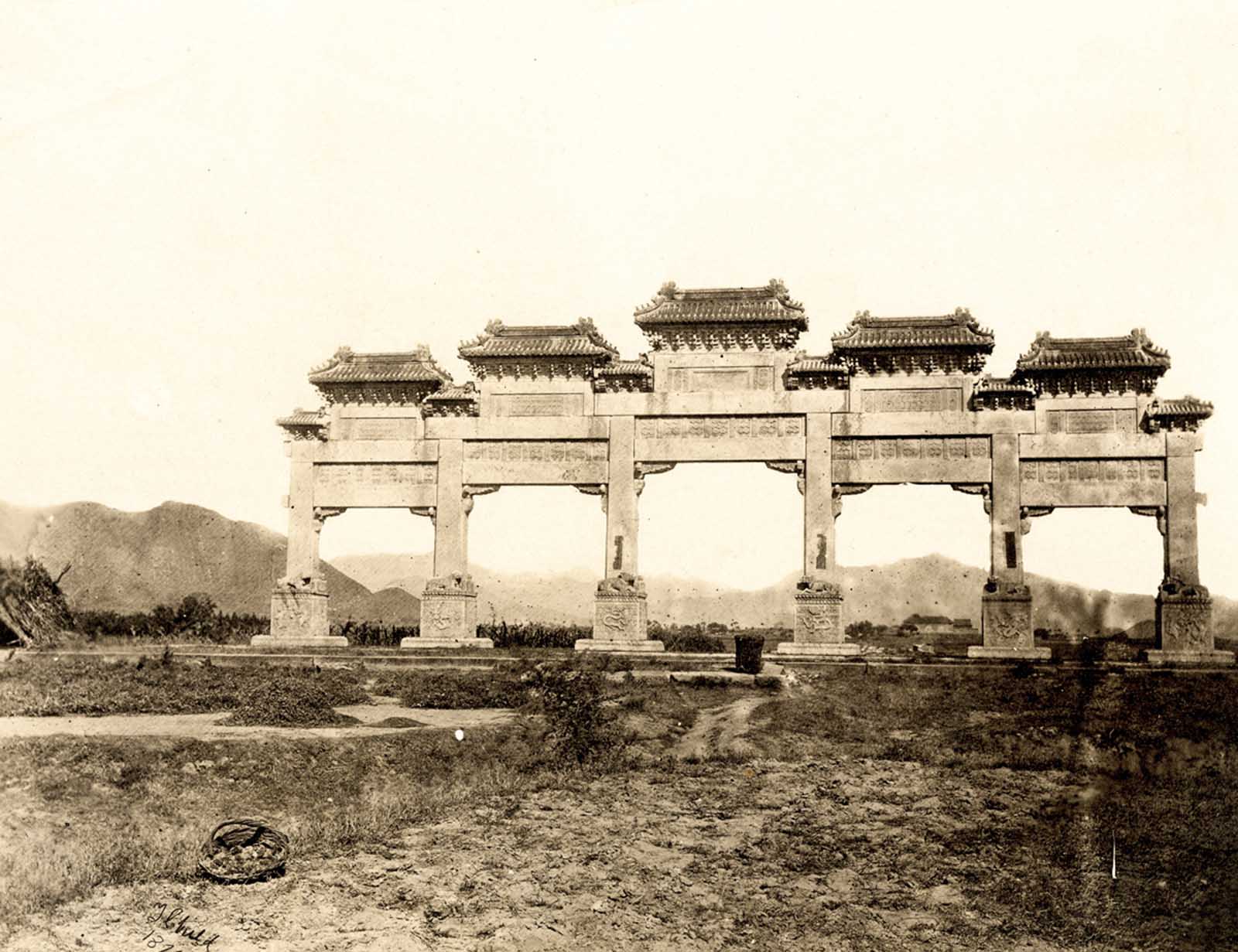 A view of the memorial arch at the entrance to the Ming Tombs outside of Peking. 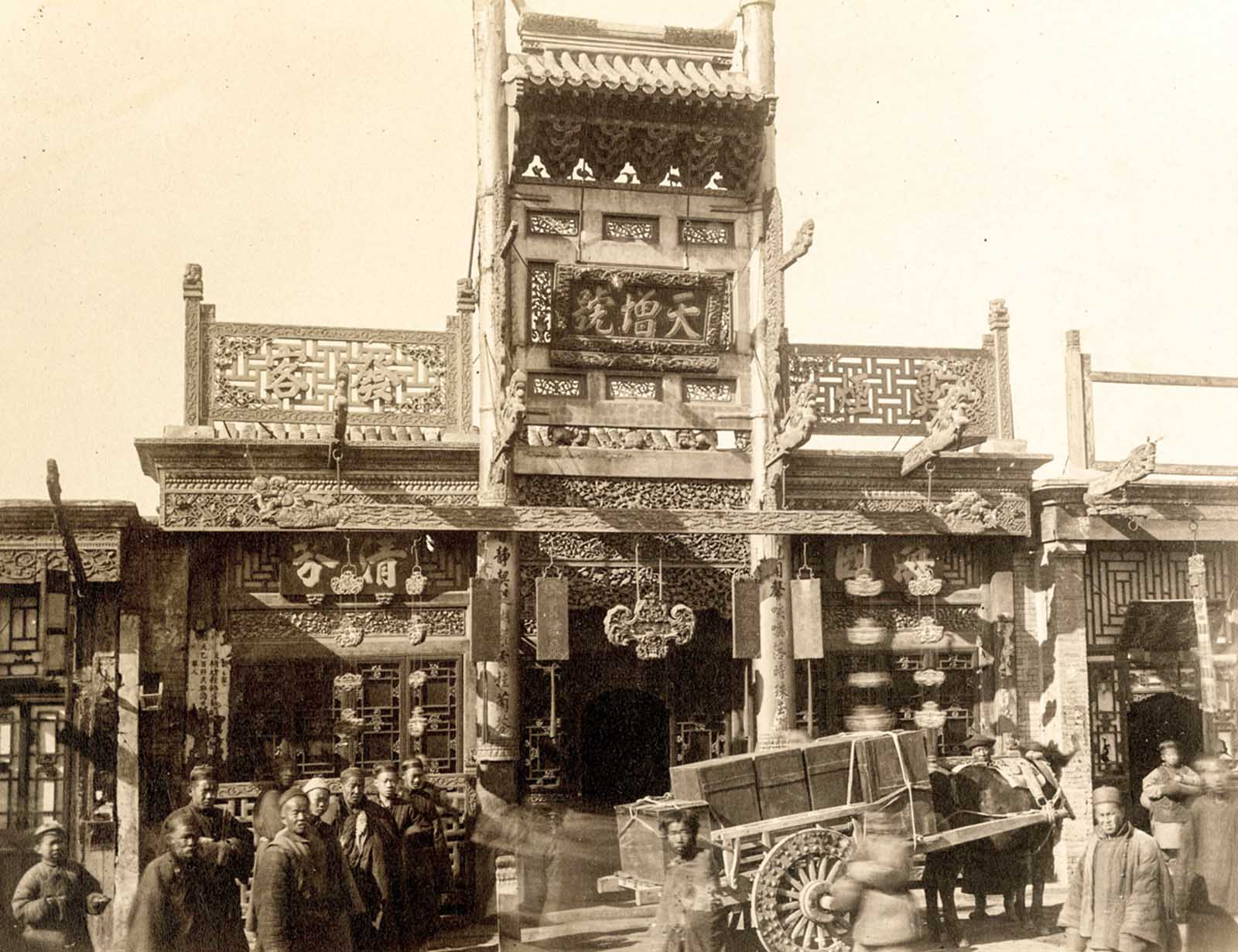 A view of a street scene in front of an ornate wooden tobacco shop in the quarter of Peking known as the Chinese City. 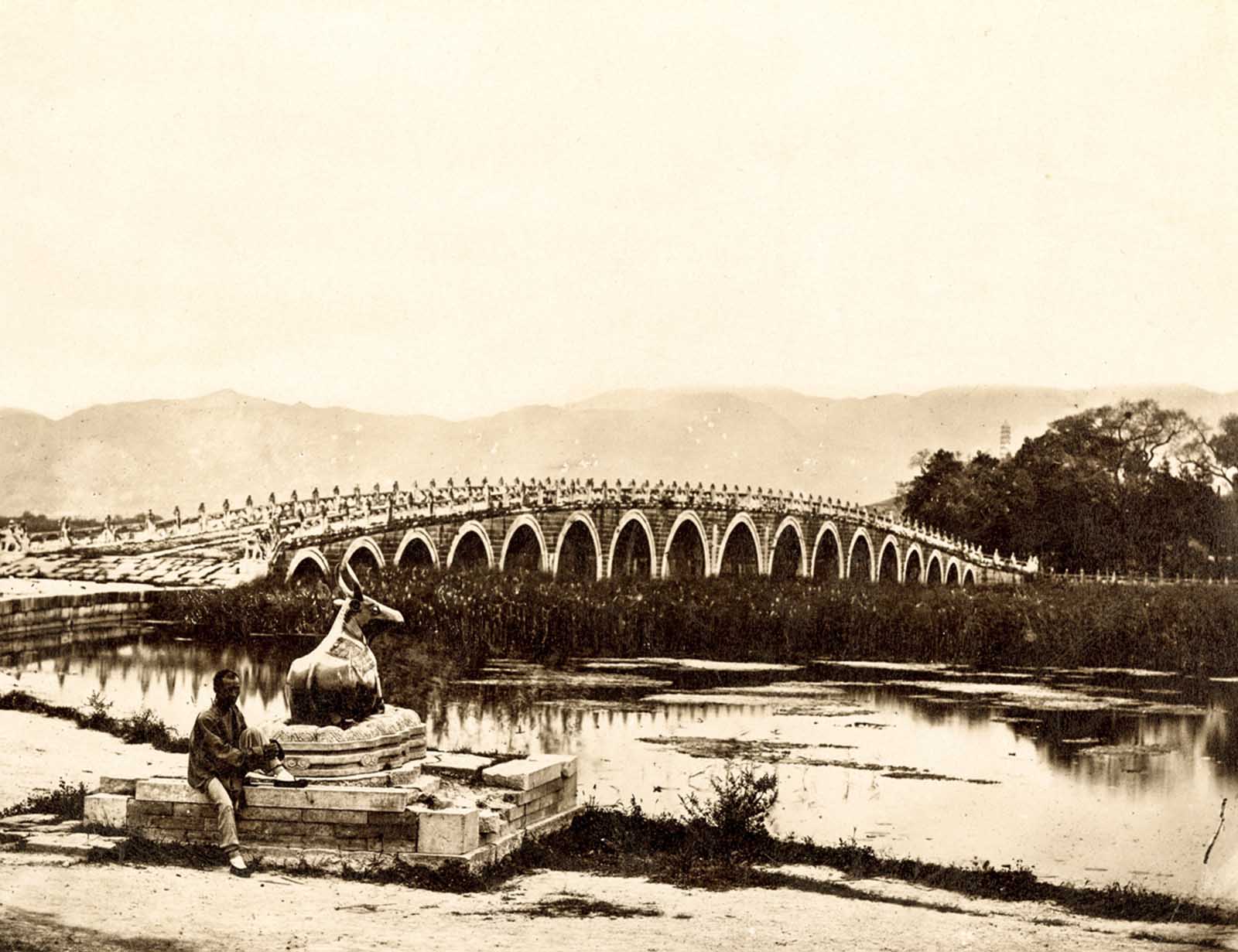 A view of the Seventeen Arch Bridge, the largest bridge of any imperial garden, on the grounds of the Summer Palace. This photograph of the bridge includes the Bronze Ox overlooking Kunming Lake. Cast in 1755, the Bronze Ox was positioned on the lake in hope of preventing floods, as the ox is said to possess special power over water. Inscribed on the back of the ox in seal characters—the most ancient form of Chinese script—is the famous ode “Inscription on the Golden Ox” by the Emperor Qianlong. 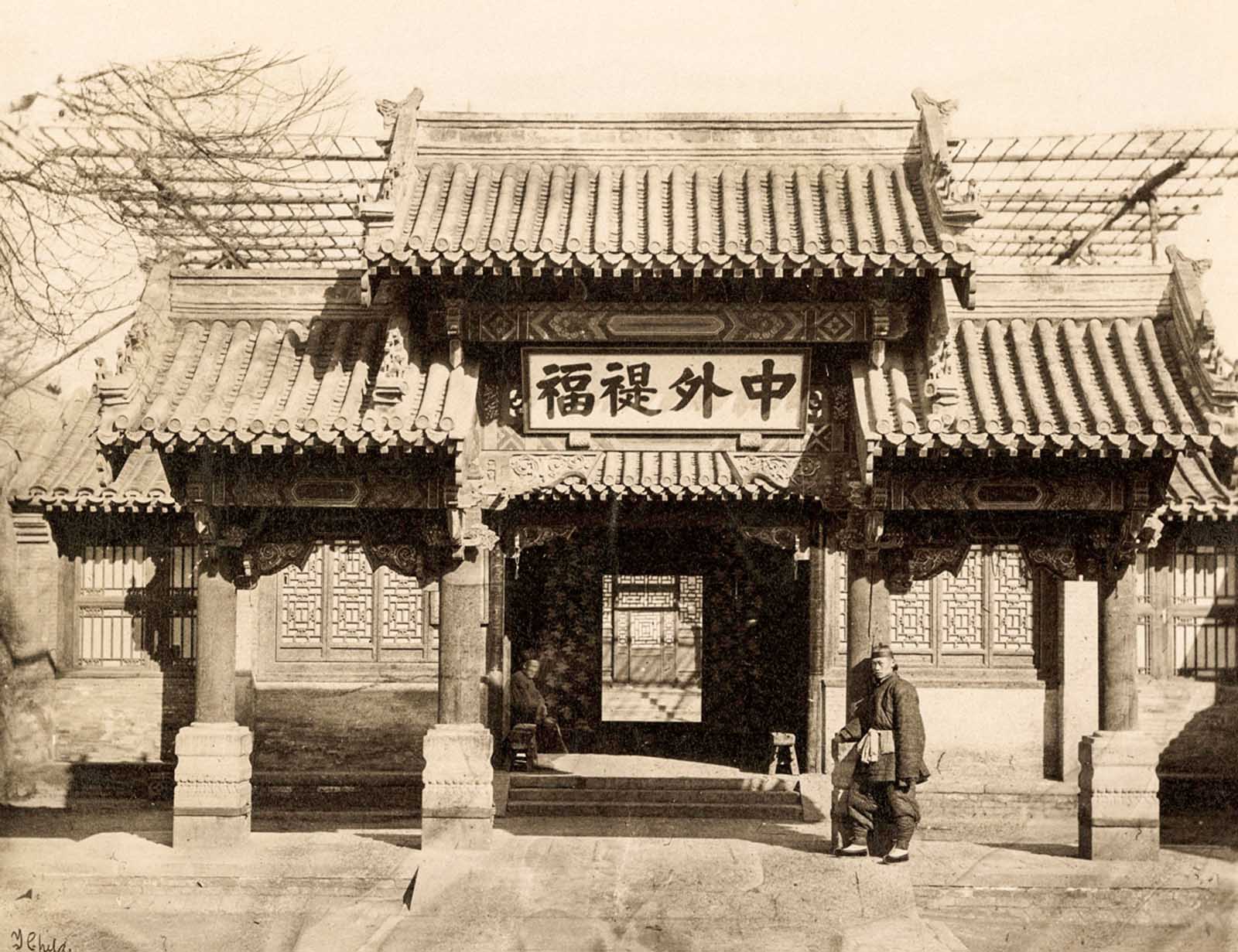 A view of the Zongli Yamen, the Qing government’s Foreign Office. Established by Prince Gong in 1861, it served as a bureaucratic agency dealing with the requests of foreign ministers to China from Peking’s diplomatic quarter.