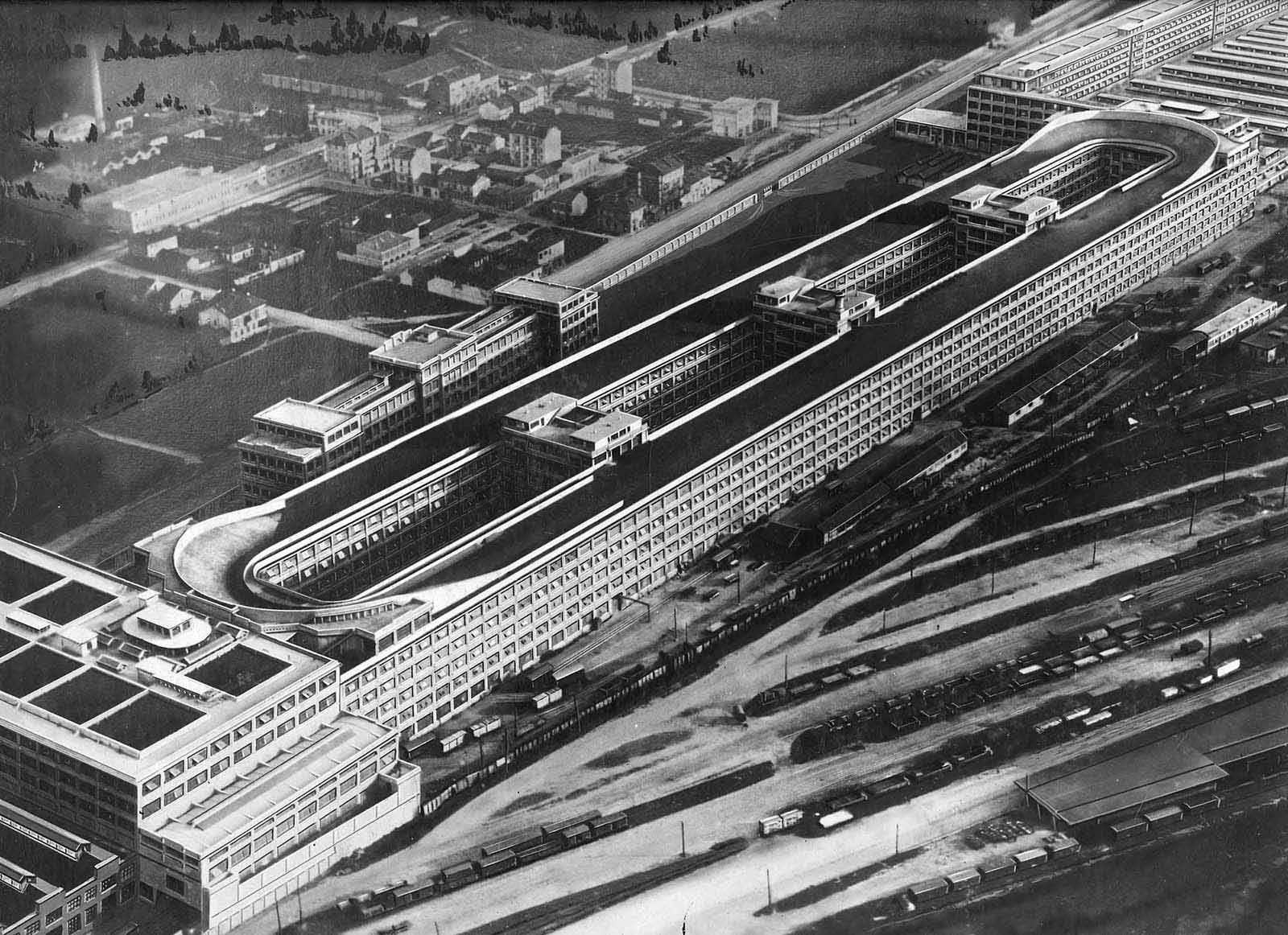 Historical view of Lingotto building with the test track on the roof.

The racetrack on top of a factory is actually a very famous now-defunct Fiat factory located in the city Turin in North Italy. When Giovanni Agnelli, the CEO of Fiat, had visited the Ford factory in Detroit, he then decided to expand production by adopting new and evolutionary production technologies in a state-of-the-art building that was innovative and unique from an architectural point of view.

Built between 1916 and 1923, the Lingotto factory building was the brainchild of Italian engineer Giacomo Mattè-Trucco and was one of the first buildings of its size to rely heavily on reinforced concrete.

The building is formed of two longitudinal bodies, each 507 meters in length by 24 meters wide, joined together by five transversal bodies and two twisted ramps on each end.

The cars were assembled while moving from the ground floor to the fifth floor. Each floor was dedicated to a special construction stage and with assembly lines, allowing workers to not move from their work station, thus reducing assembly times.

The factory’s best-known symbol is the test track, which is a superb piece of design modeling, and construction that occupies the whole roof surface of the workshops. Two 443 meters straights, joined by parabolic bends, form a continuous track for testing the cars.

Originally, as soon as the cars left the assembly lines they could flow directly upward to the test track through the snail-shaped ramps completing the whole processing cycle inside the factory. Moreover, these spiraling ramps inside the building allowed the cars to be driven back down and into showrooms. 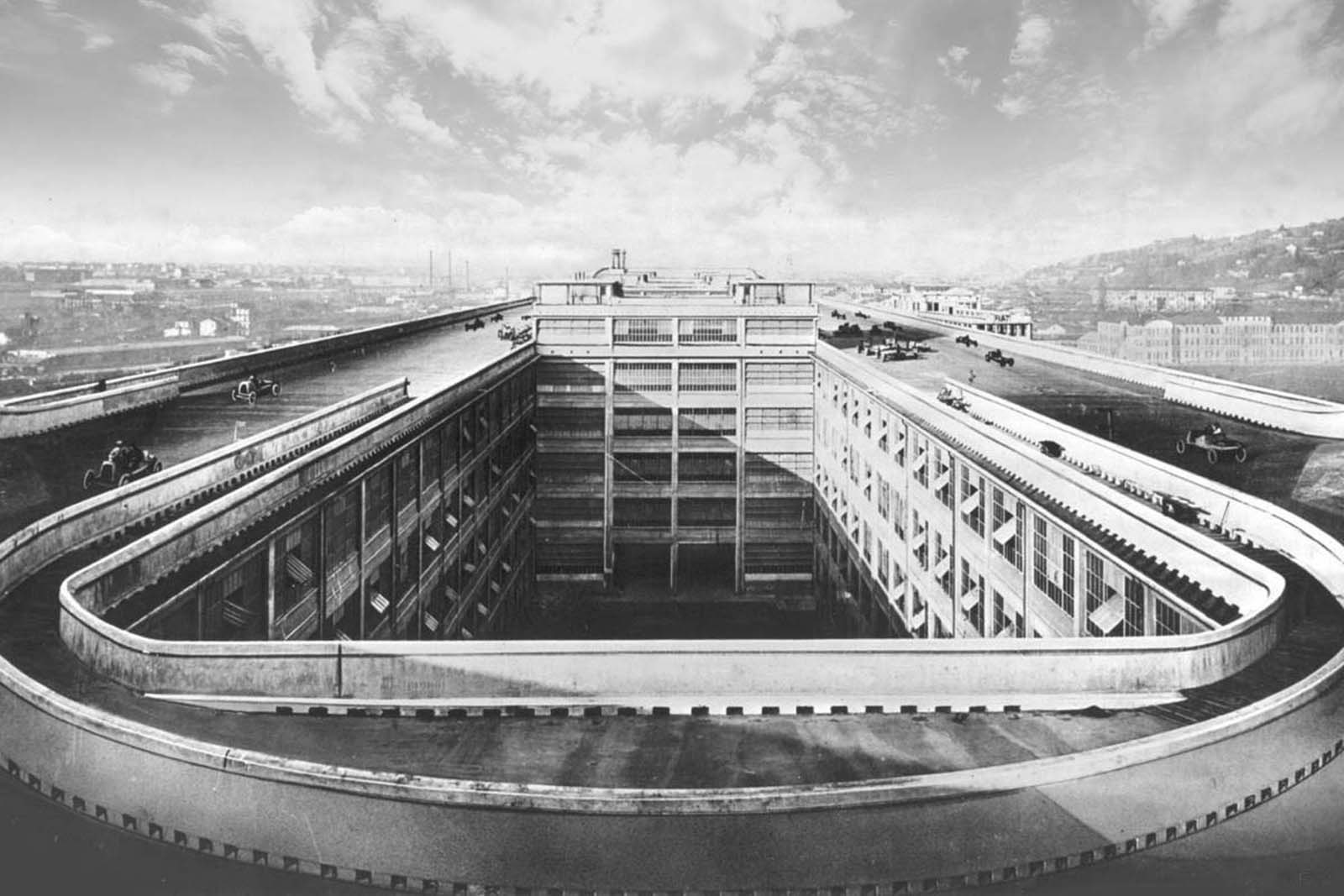 Racecars race atop the Lingotto factory.

The Lingotto factory was opened in 1926 in the presence of King Vittorio Emanuele III. At that time, production had already started and the office building was complete. Back in the day, Lingotto was Europe’s most advanced factory with about 12,000 blue-collar workers and 500 white-collar workers working three shifts in a continuous cycle.

For its time, the Lingotto building was avant-garde, influential, and impressive and the famous architect Le Corbusier called it “one of the most impressive sights in industry”, and “a guideline for town planning”.

But what separates Lingotto from American plants of the same period is sheer rhetoric. The American plants are useful and fairly cheap facilities for manufacturing things in.

Fiat, which is uncannily like an American concrete-framed building in all its details, is also a public statement about modem manufacture, about modernity itself. Marinetti hailed it (of course) as “the first invention of Futurist construction.”

By the late 1970s, the factory had become obsolete, and a decision was made to finally close it in 1982. In almost 60 years 80 car models and 35 different types of the engine, as well as commercial vehicles, components, and household appliances, were produced. 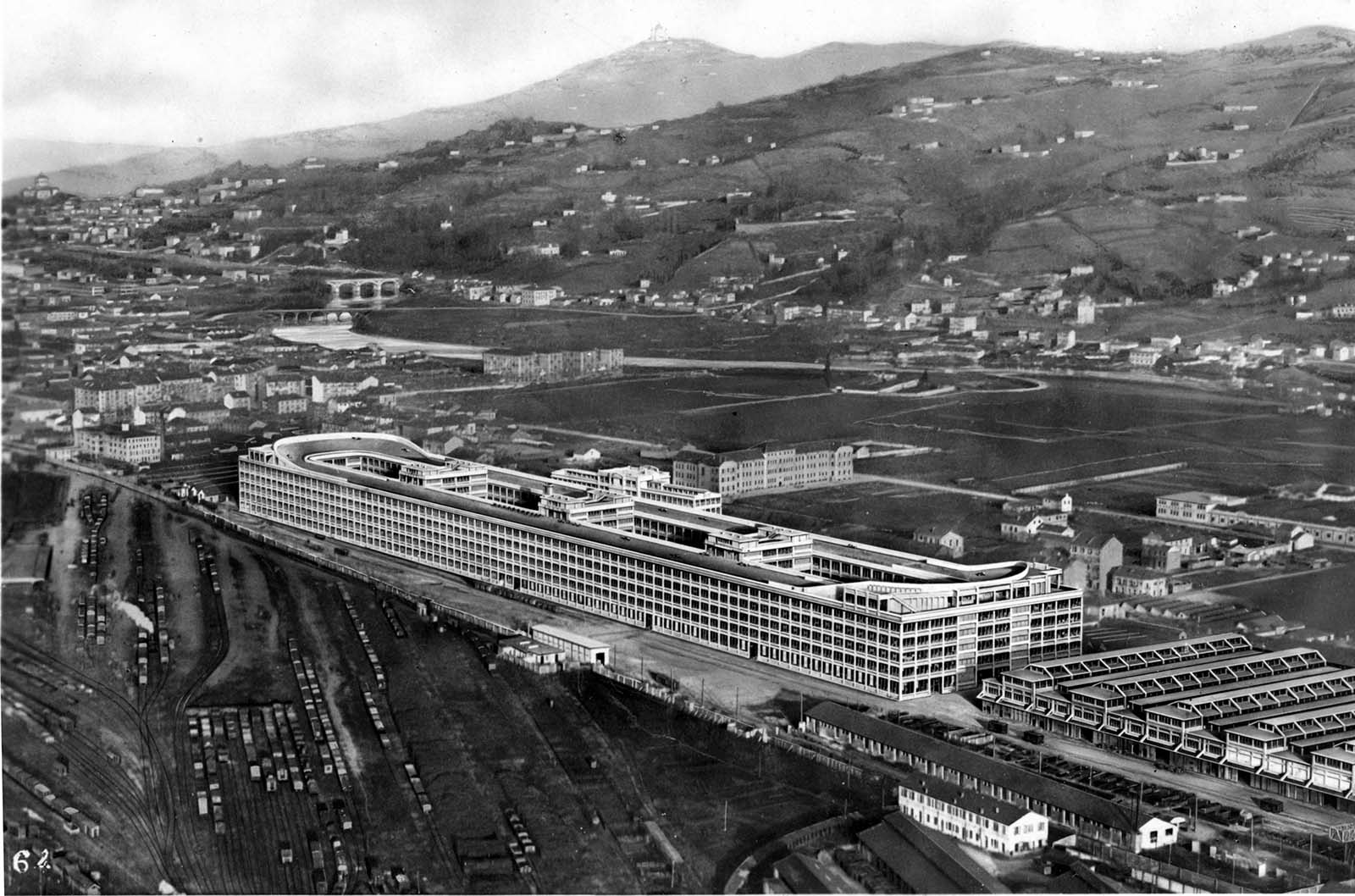 Another view of the Lingotto factory in Turin, Italy.

The closure of the plant led to much public debate about its future, and how to recover from industrial decline in general. An architectural competition was held, which was eventually awarded to Renzo Piano, who envisioned an exciting public space for the city.

The old factory was rebuilt into a modern complex, with concert halls, a theatre, a convention center, shopping arcades, and a hotel. The eastern portion of the building is the headquarter of the Automotive Engineering faculty of the Polytechnic University of Turin.

The track was retained, and can still be visited today on the top floor of the shopping mall and hotel. Over time, considerable movie and television production has been filmed at this famously unique location such as the movie The Italian Job, starring Sir Michael Caine. 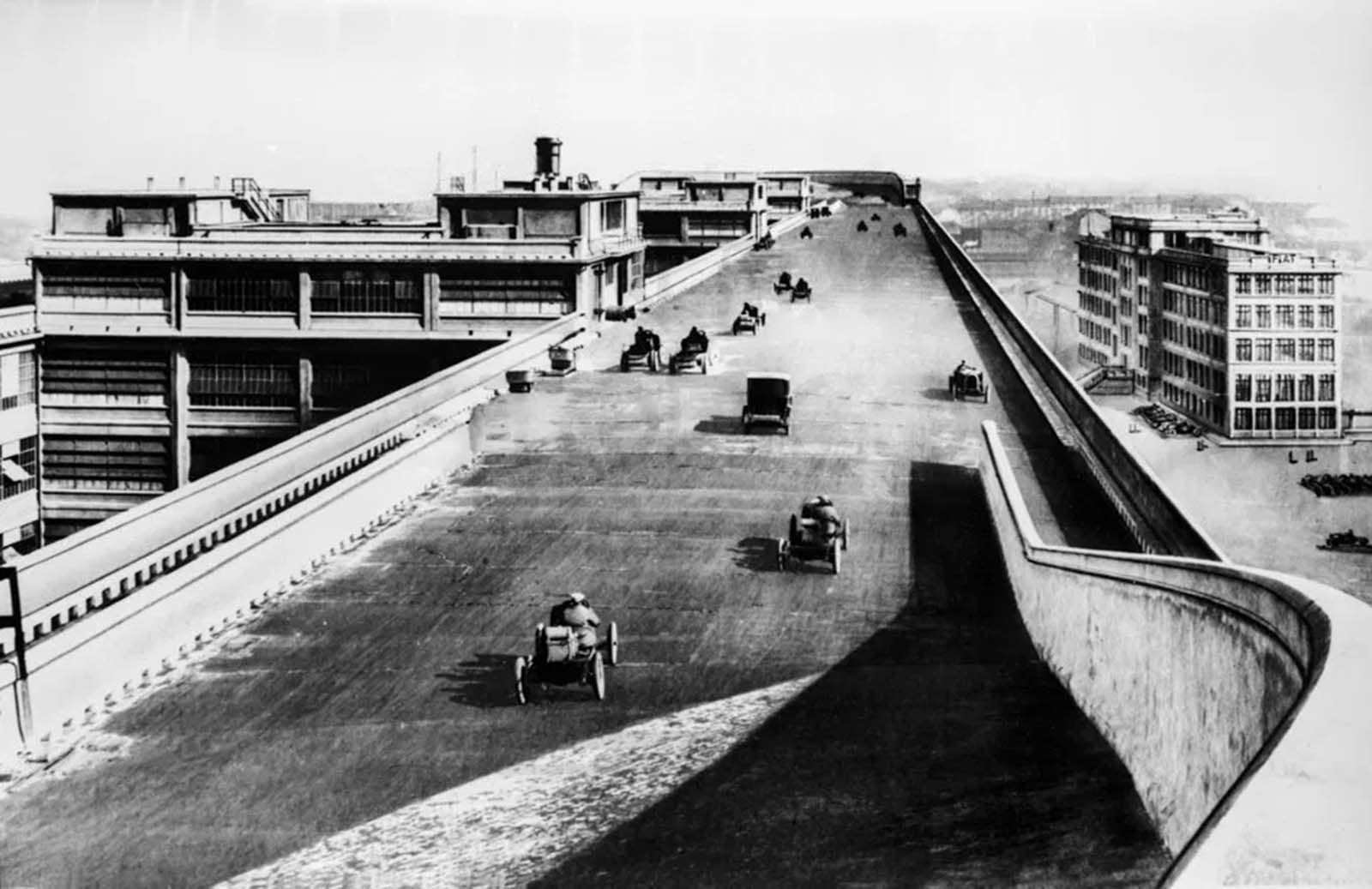 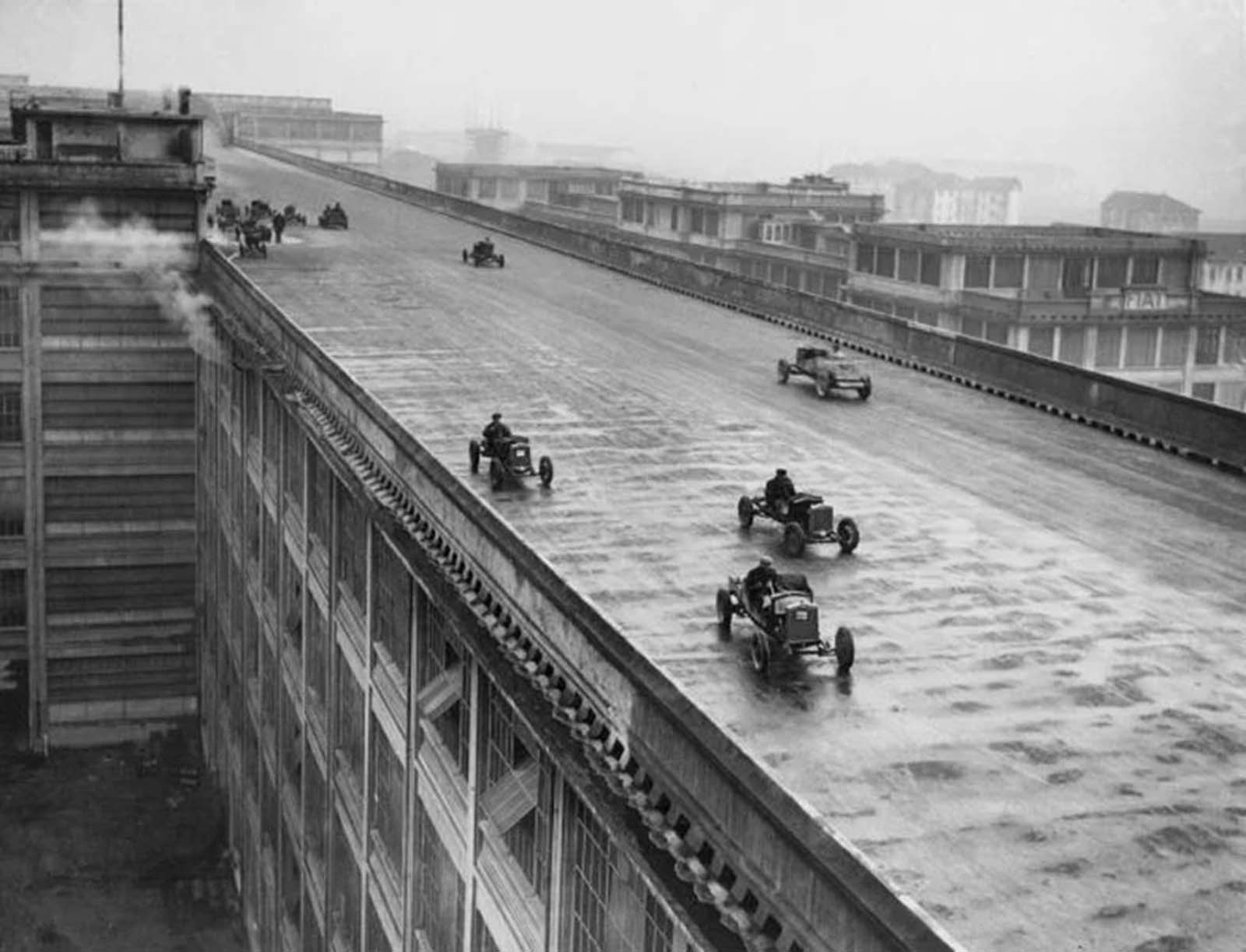 Racecars race atop the Lingotto factory. 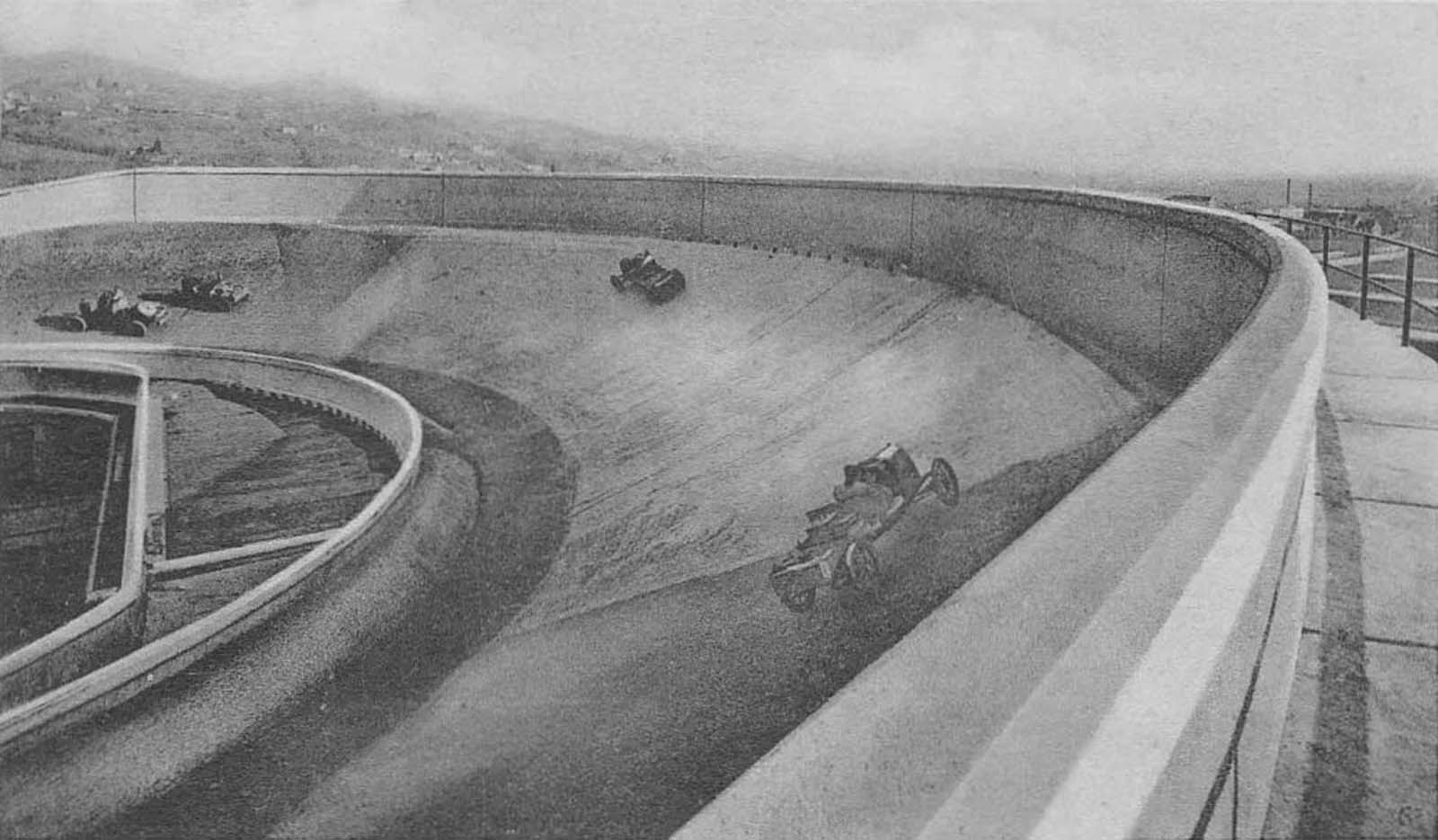 Finished cars emerged at the rooftop level to go onto the test track. 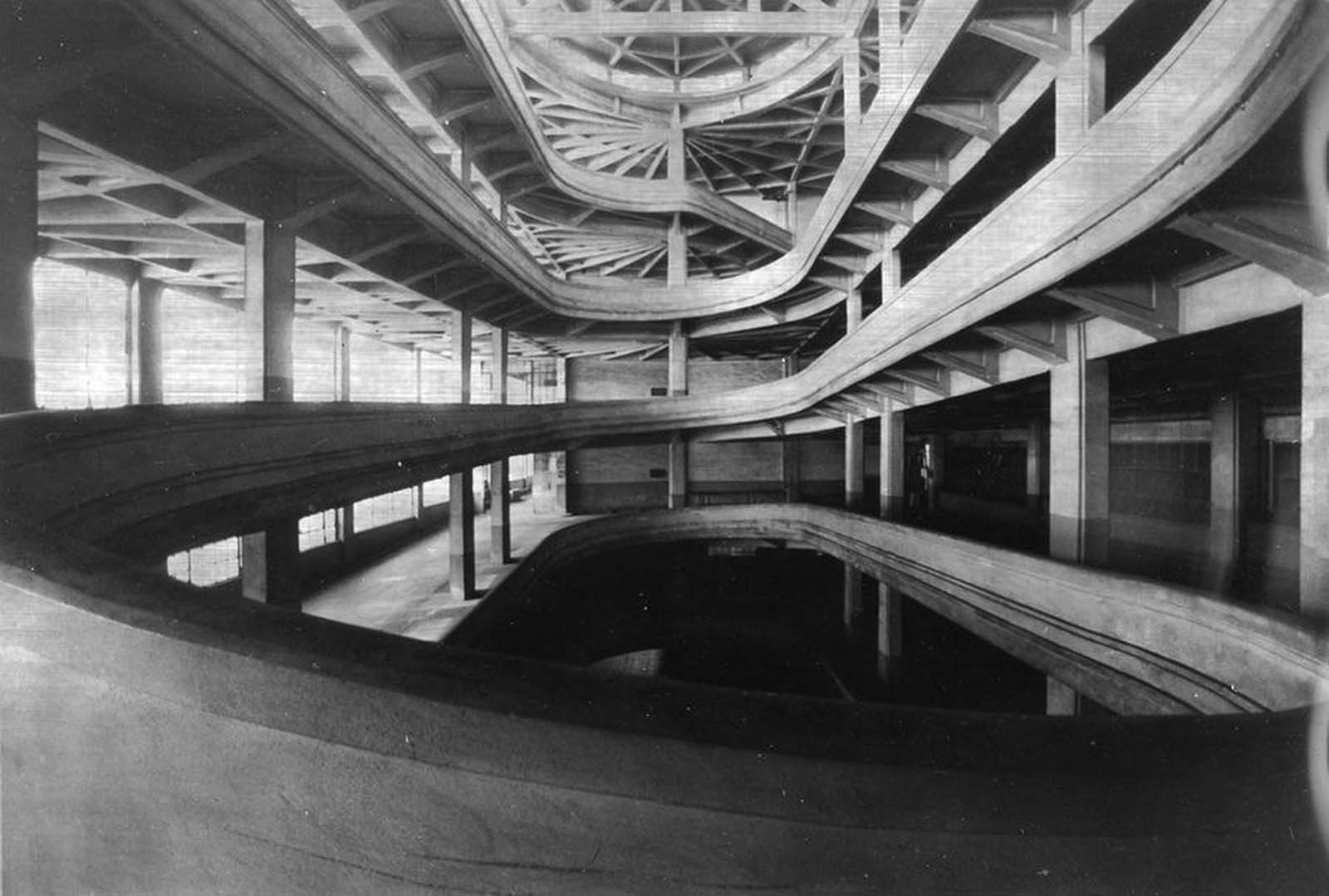 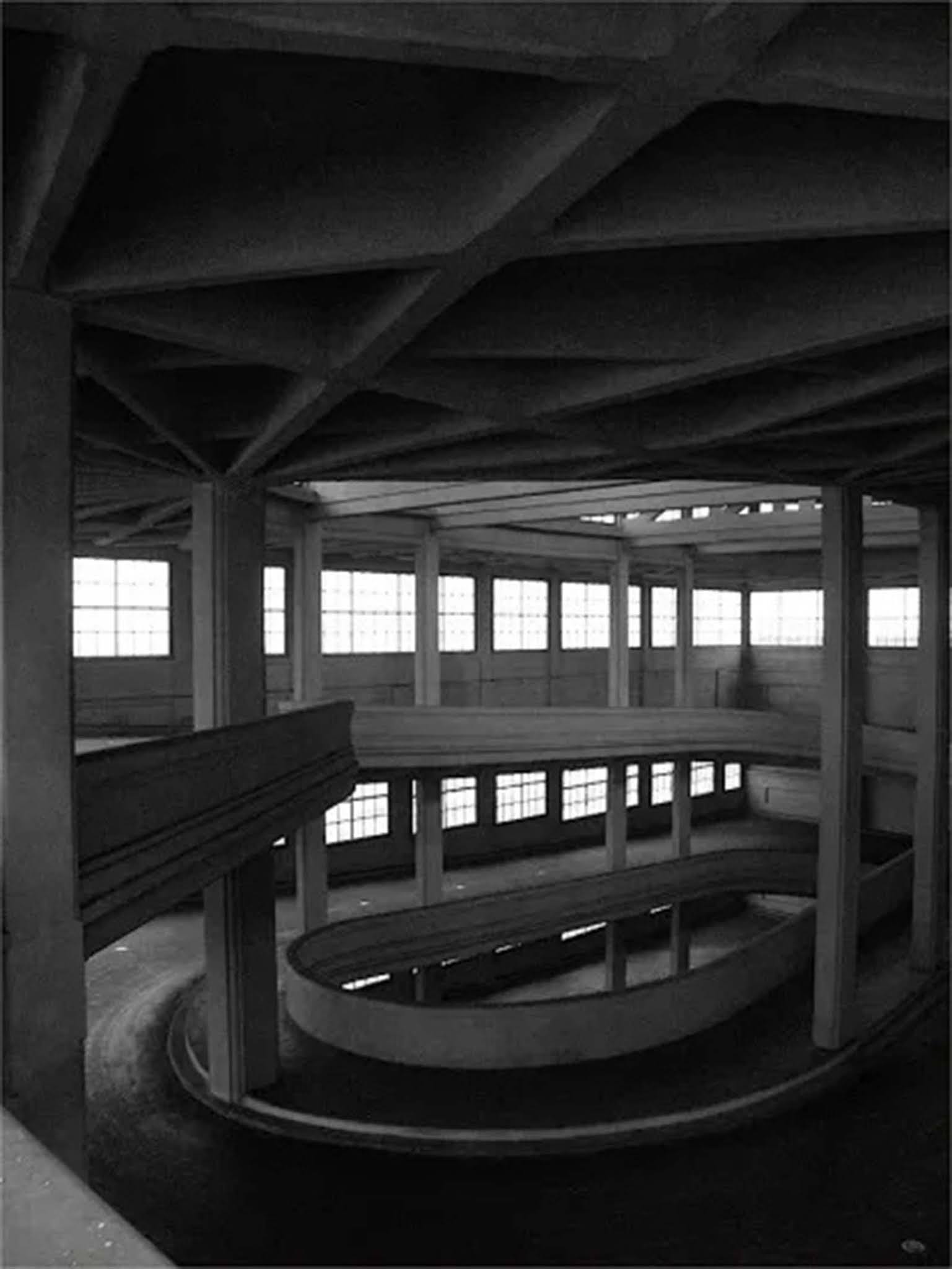 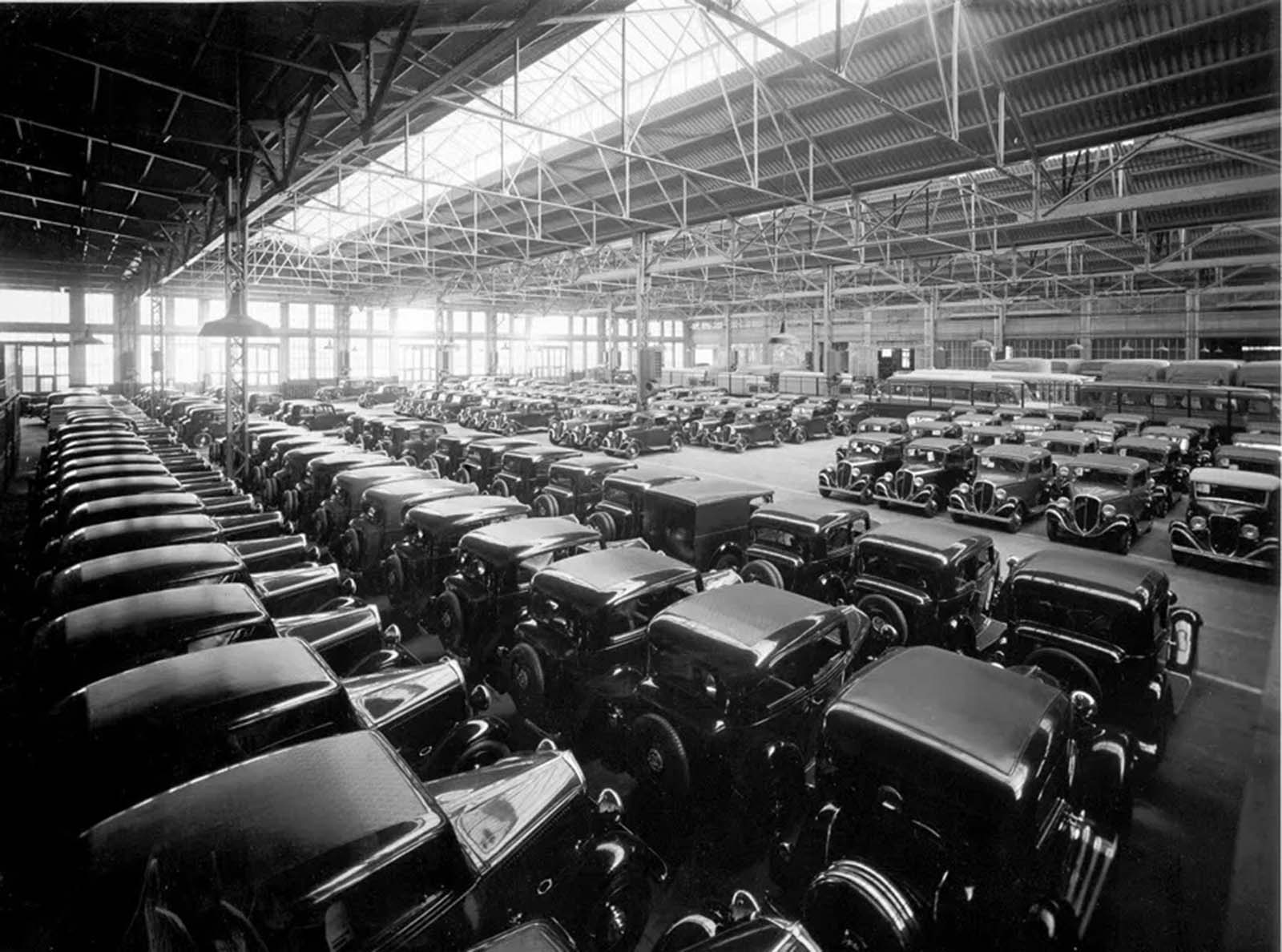 80 different models of car were produced there in its lifetime, including the Fiat Topolino of 1936. 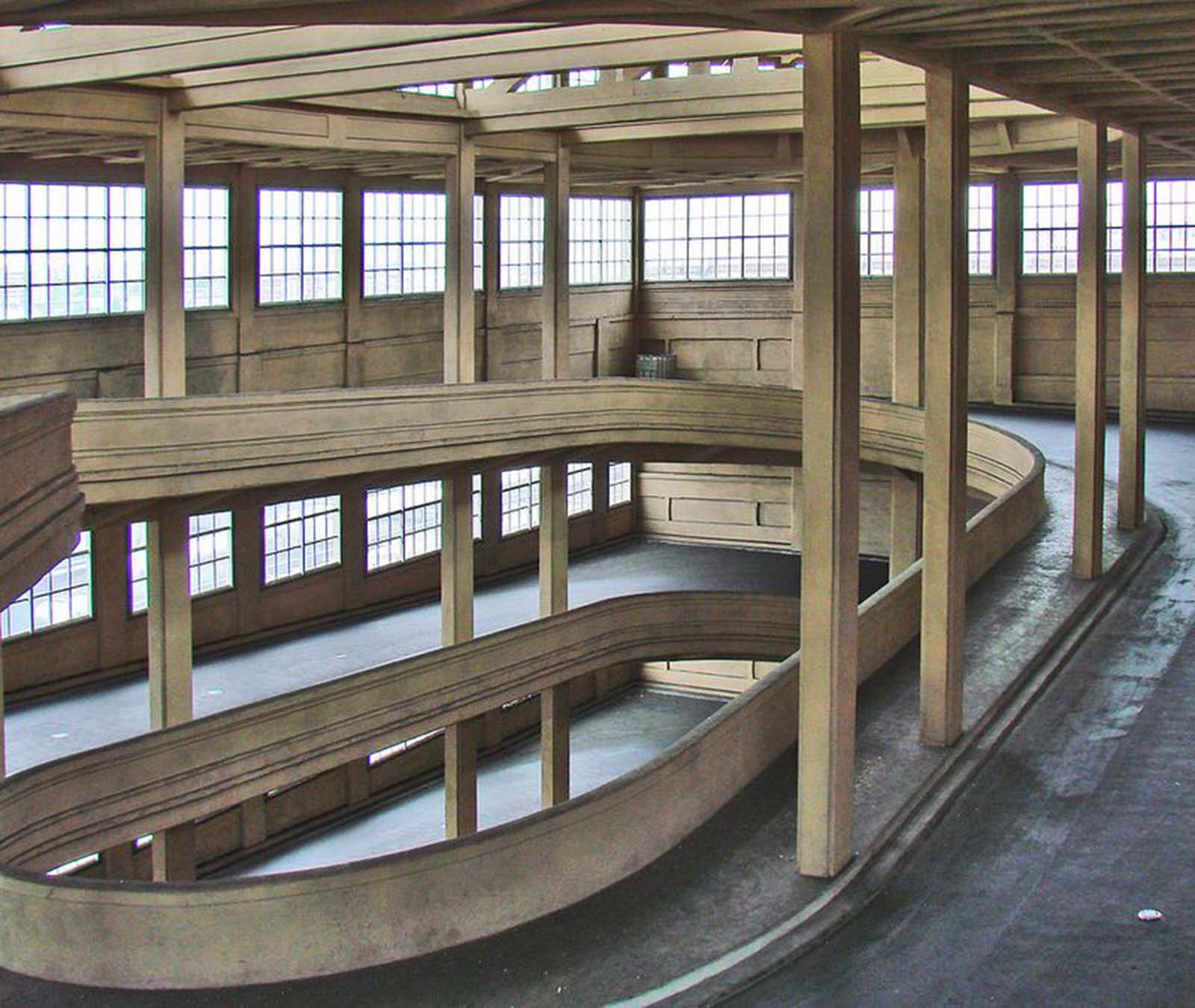 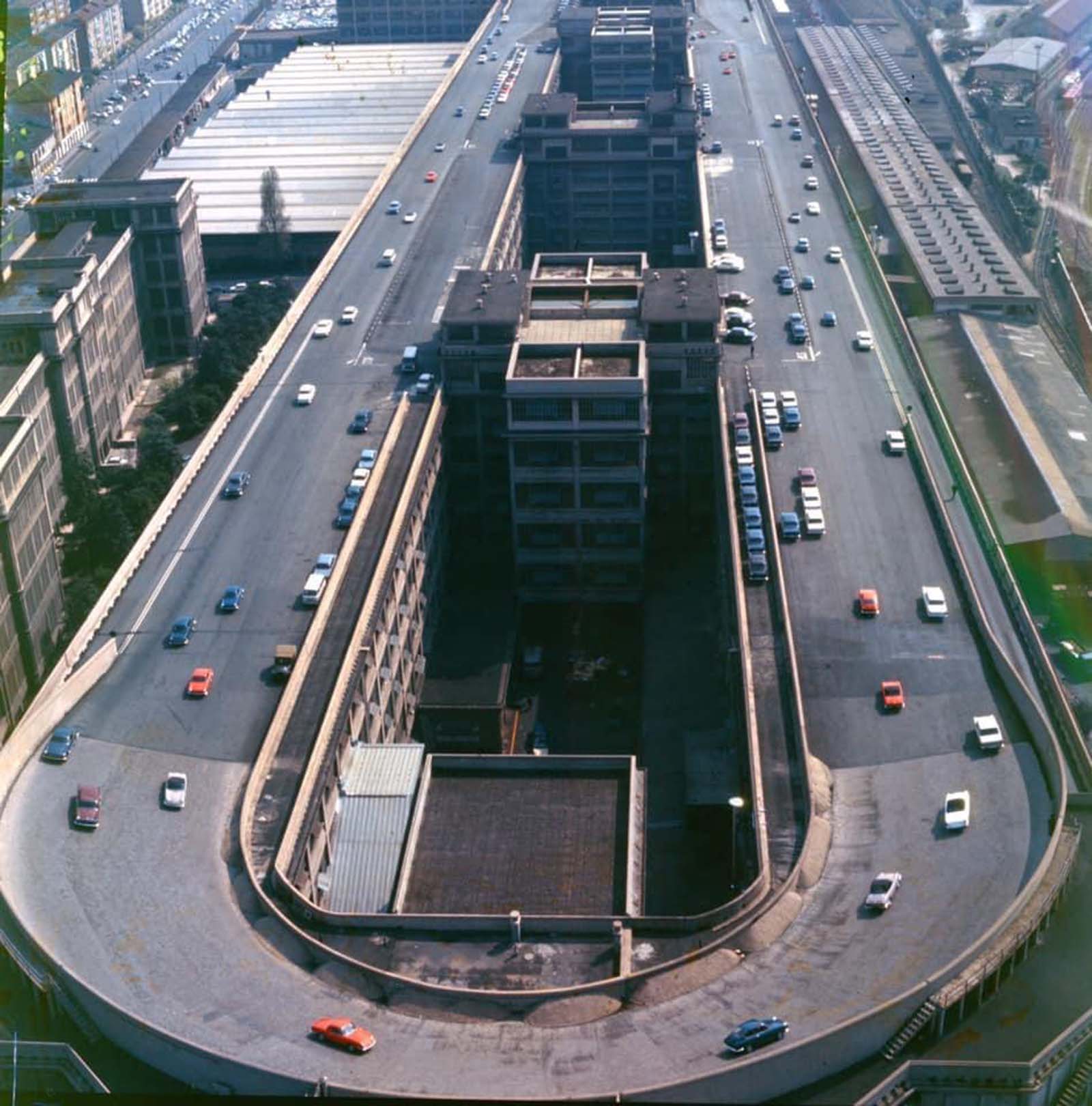 Another race taking place on the rooftop racetrack. 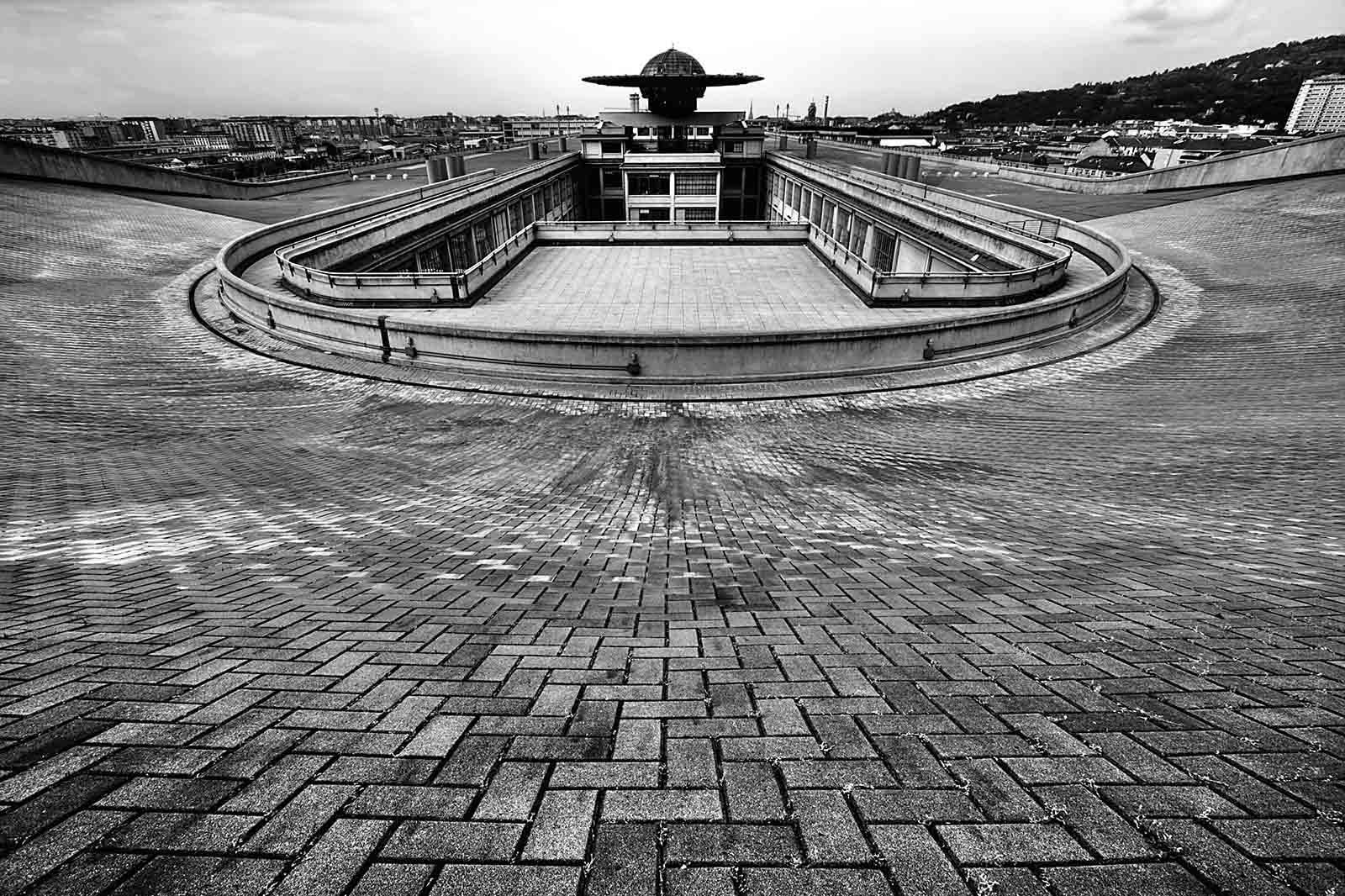 Another view of the racetrack. 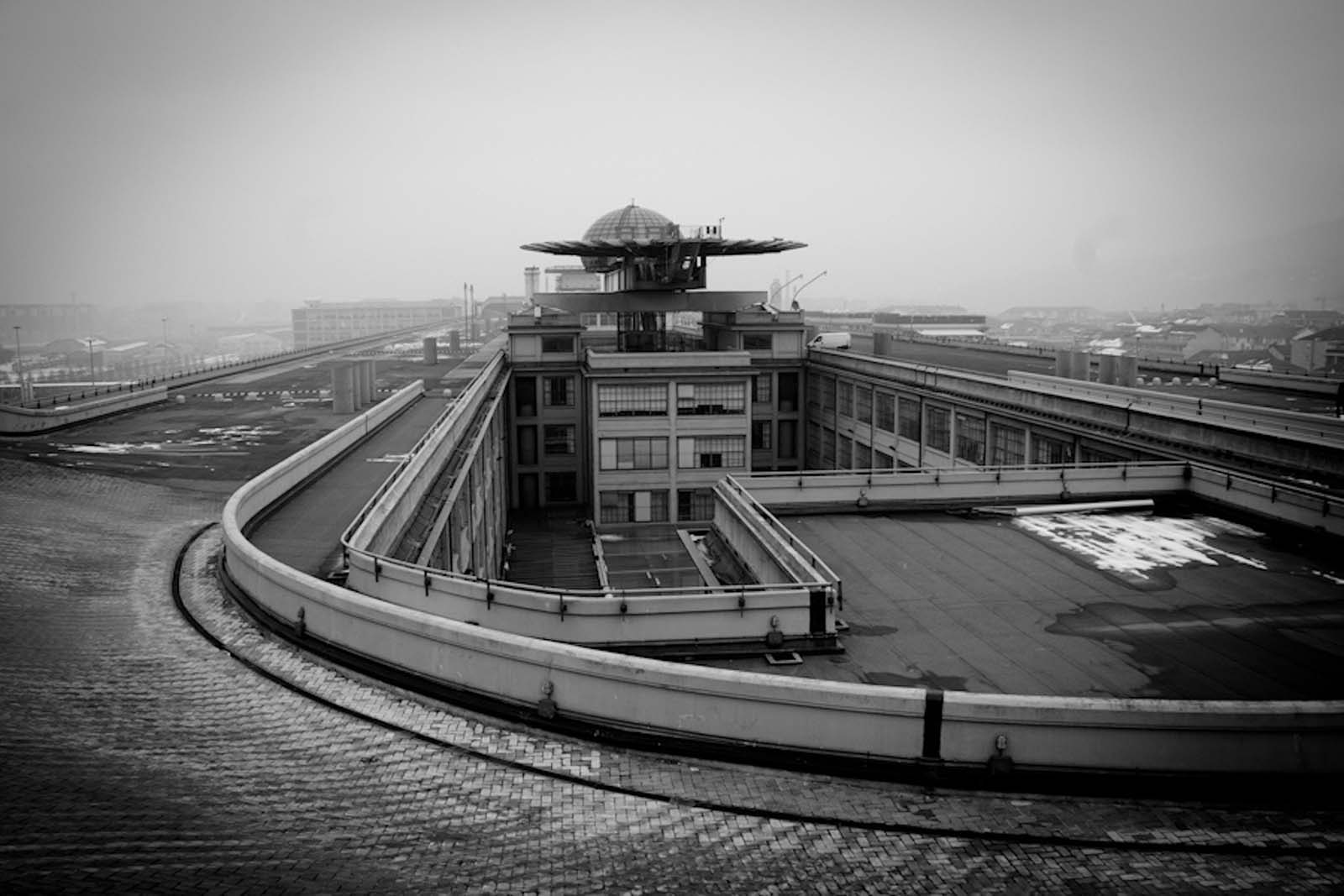 View from the rooftop racetrack. 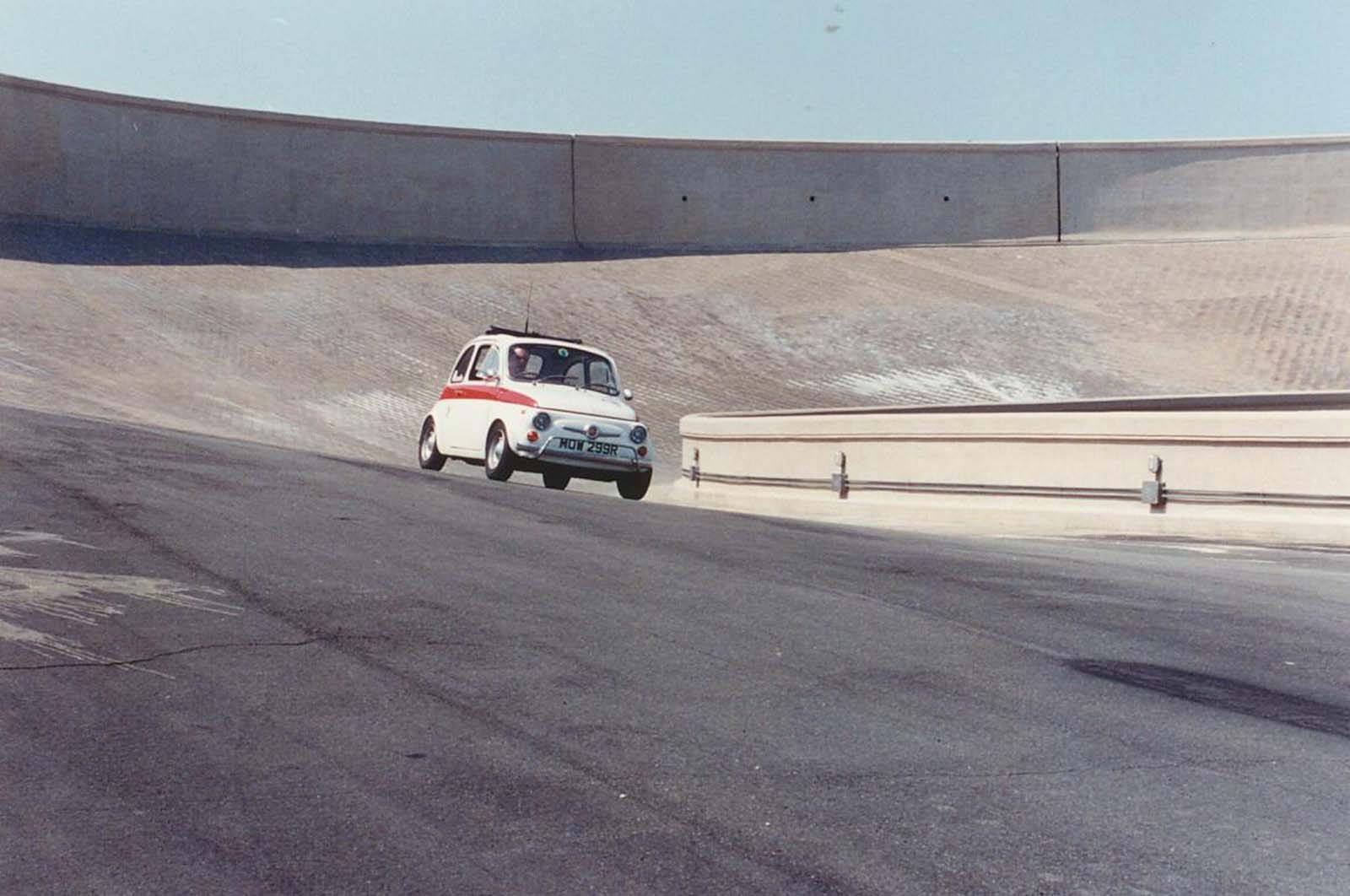 Taking a Fiat going for a test drive.