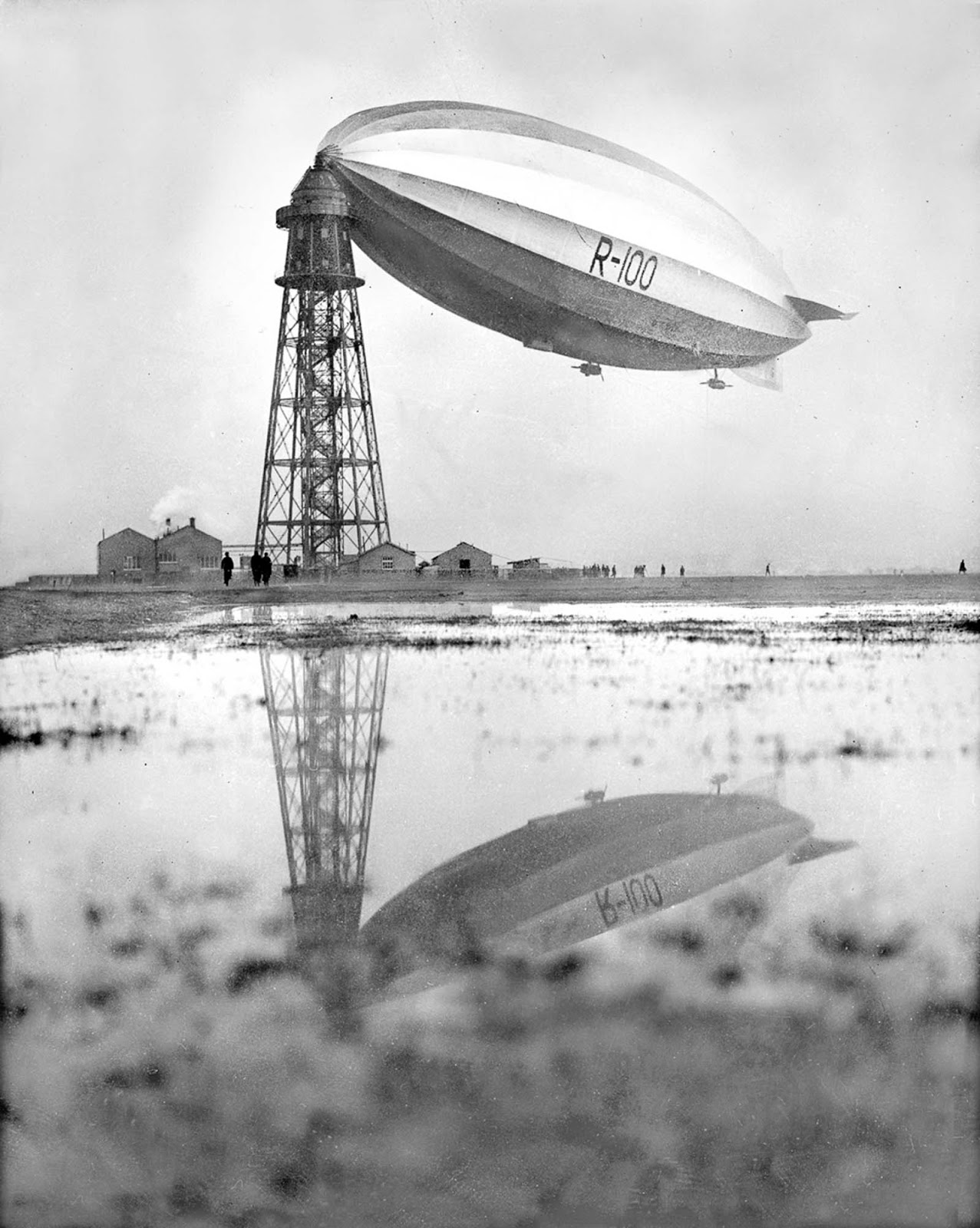 The R100 airship was built as part of a British government programme to develop airships to provide passenger and mail transport between Britain and the countries of the British Empire, including India, Australia and Canada. Originally, it was proposed that two airships be constructed: one, R101, to be designed and constructed under the direction of the Air Ministry, and the other, R100, to be built by a private company under a fixed price contract.

The R100, designed by Barnes Wallis, was the first to be finished in Howden, Yorkshire in 1929. The airframe was made of duralumin, an early aluminum alloy, and covered with a giant 5-acre fabric coating stitched together in pieces and stretched into place. Inside the cavernous 146,000 cubic metre shell, 17 gas bags made from oxen intestines provided the all-important buoyancy.

The bags were filled with a combined 500 million cubic feet of ultra-flammable hydrogen. The United States had a monopoly on helium, another lighter-than-air gas, and it wasn’t available in the qualities the UK required for their airship program.

In contradiction to the R100’s basic construction, the crew and passenger quarters in the rough centre of the airship were luxuriously appointed. A double staircase led down to the interior dining room. The dining and central space had galleries in which passengers could access the accommodation. Flanked on each side were two large panoramic windows allowing a two tier promenade deck giving the interior a large, open and light feel.

The R100 could carry 100 passengers in a selection of accommodations; an arrangement of 14 two-berth and 18 four-berth cabins were available. With two sets of double height windows in a curved shape on either side of the ship, it gave light to two sets of promenade decks on both sides of the passenger accommodation.

A gallery led to the upper deck cabins, which could overlook the lower promenade deck. The dining room was internal to the ship, and could seat 56 passengers in one sitting. The catering was undertaken in an electric kitchen next to the dining room, where the food would pass through a large window by the serving staff to the diners. The R-100 advertising brochure described it as “like a small hotel” and “intermediate in comfort between a Pullman coach and ocean liner.”

R100 made its maiden flight in the morning of 16 December 1929. After departing Howden at 07:53, it flew slowly to York then set course for the Royal Airship Works at Cardington, Bedfordshire, running on five engines since one of the engines had to be shut down because of a cracked water jacket, and completing the mooring process at 13:40.

A second flight was made the next day, with the intention of making a flight to London, but shortly after slipping the mast a strip of fabric became detached from the lower fin, and the flight was limited to a cruise around Bedfordshire to test control response, lasting 6hr 29 min. The following day, R100 was taken from the mast to No.2 shed at Cardington and work on modifying the wiring holding the cover in place began: this took until 11 January 1930.

During a test on 16 January 1930, R100 achieved a speed of 81.5 mph (131.2 km/h). At speed a problem with the outer covering became apparent: it tended to ripple and flap excessively in the form of a standing wave. During a fourth flight on 20 January cine film was taken of this phenomenon, which occurred because of the large areas of unsupported fabric; it is also visible in some photographs.

After the 7 successful trial flights and flights checking the outer cover ripple effect, the decision was made for a transatlantic flight or long distance proving flight by one of the two new airships. As the R101 had been put back in Shed Number 1 for further changes to the design to increase the disposable lift, the R100 was tasked with a trip to Canada, successfully crossing the Atlantic to Montreal to the newly erected mast. The ship slipped the moorings from the Cardington mast at 02.48am on the morning of 29th July 1930. The ship flew over the Atlantic and headed down the Newfoundland coast.

The transatlantic passage was smooth but the airship ran into difficulties over the St Lawrence valley on a couple of occasions. Near l’Ile aux Coudres, the R.100 was buffeted by shifting winds like never before. A number of very large tears appeared on three fins and the engines had to be stopped for eight hours so that repairs could be made. The people of Quebec City, forty thousand or more, cheered and waved as the airship slowly flew overhead.

A second incident occurred closer to Montreal as the R.100 flew through storm clouds, and very strong updrafts caused more damage to the fabric of the fins. The R100 finally arrived at the Montreal mast, on 1st August at 05.37am, after a voyage of some 78 hours and 49 minutes; a journey of 3,364 miles. The airship stayed at Montreal for 12 days with over 100,000 people visiting the airship each day while it was moored there, and a song was composed by La Bolduc to make fun of the people’s fascination with R100.

After R101 crashed and burned in France, en route to India on 5 October 1930, the Air Ministry ordered R100 grounded. It was deflated and hung up in its shed at Cardington for a year whilst three options were considered: a complete refit of R100 and continuation of tests for the eventual construction of R102; static testing of R100 and retention of about 300 staff to keep the programme “ticking over”; or retention of staff and the scrapping of the airship. In November 1931, it was decided to sell R100 for scrap. The entire framework of the ship was flattened by steamrollers and sold for less than £600. 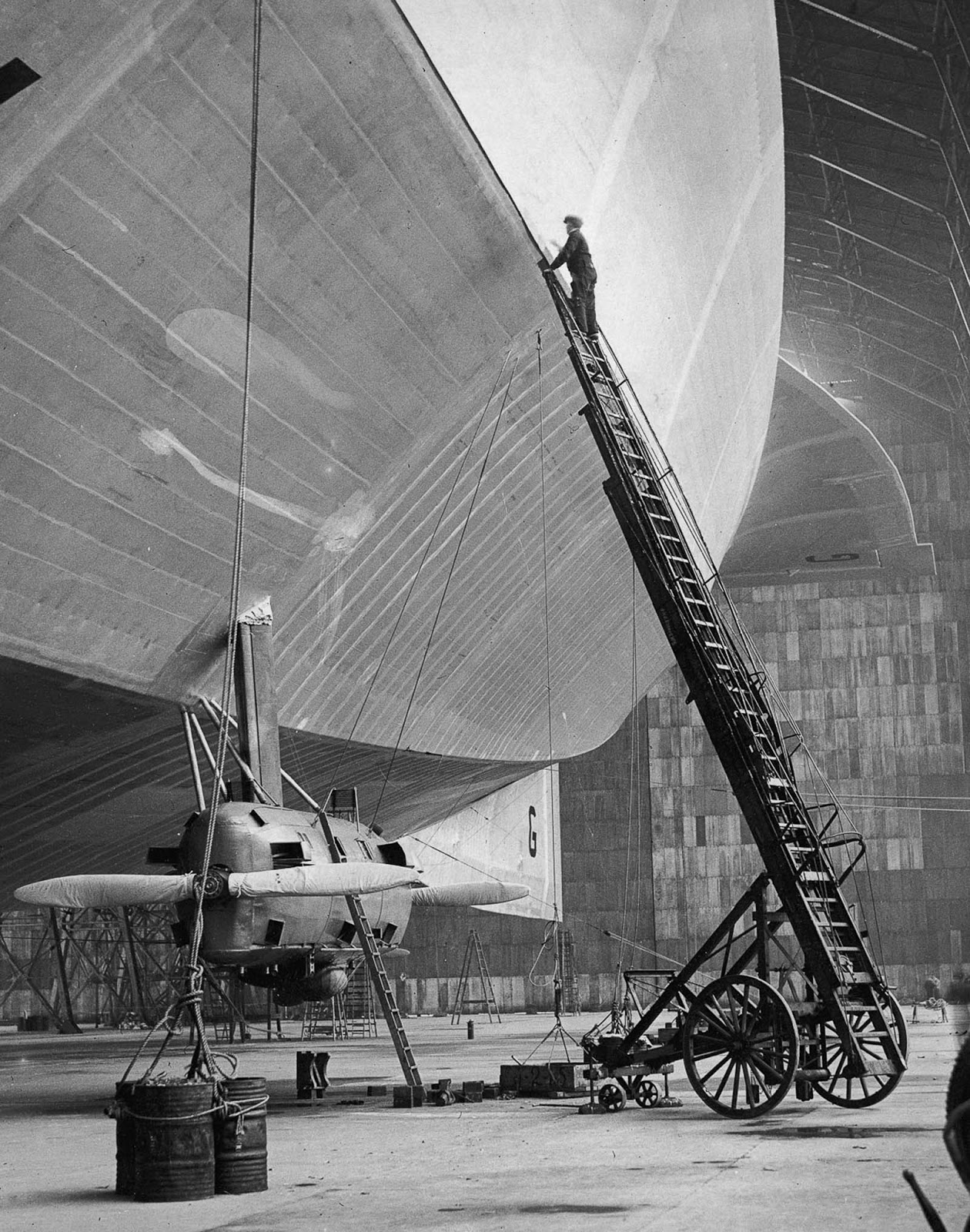 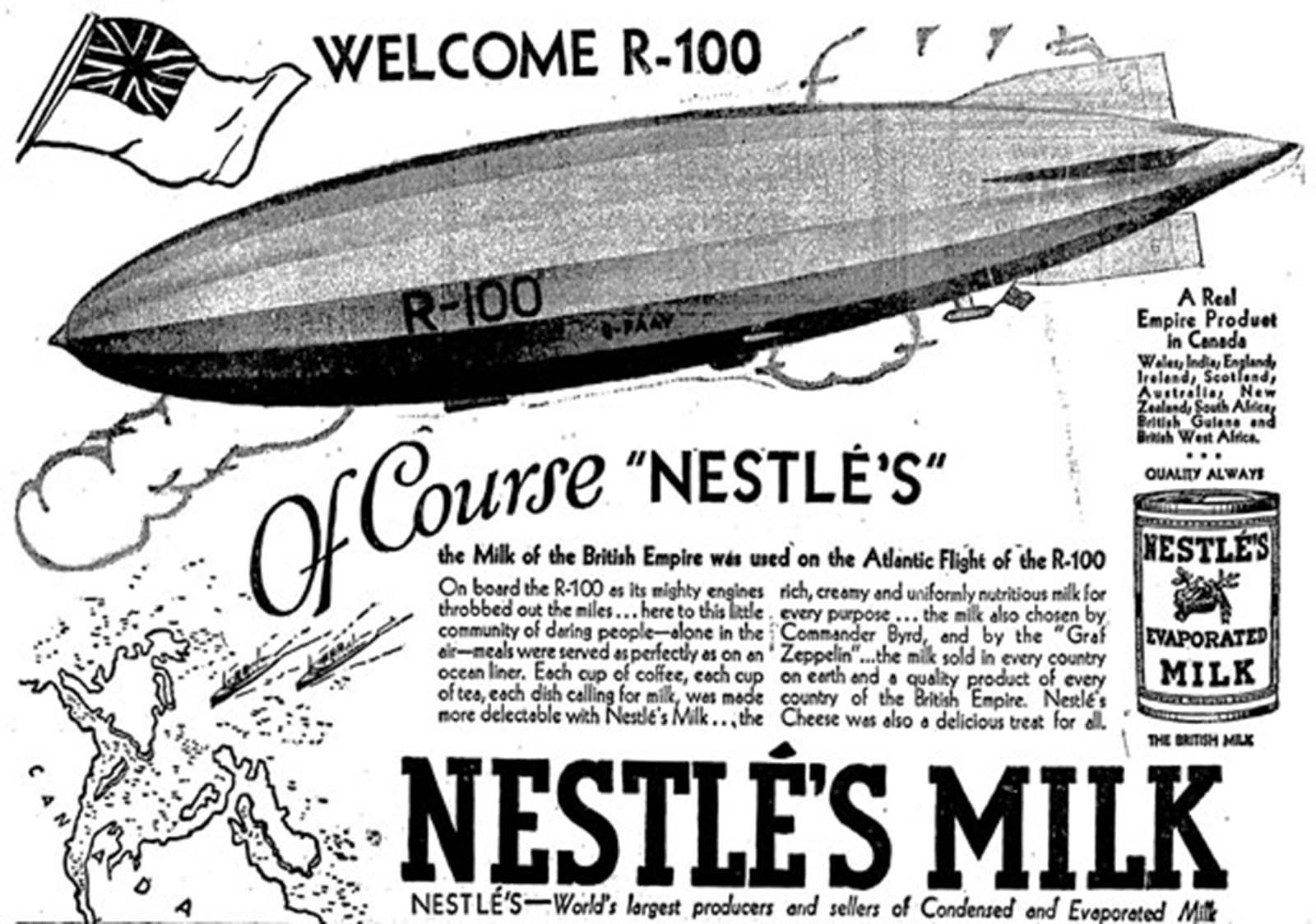 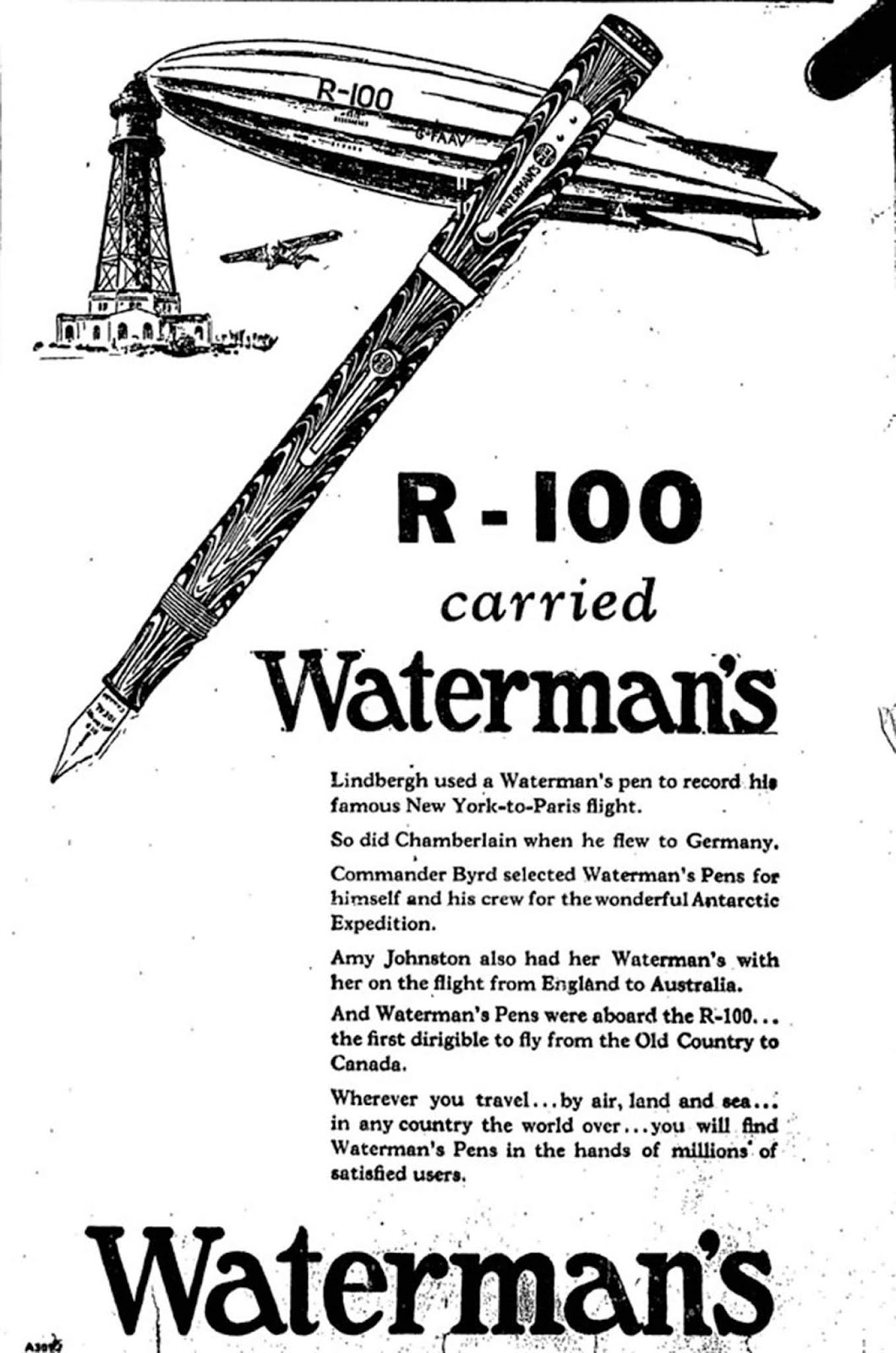 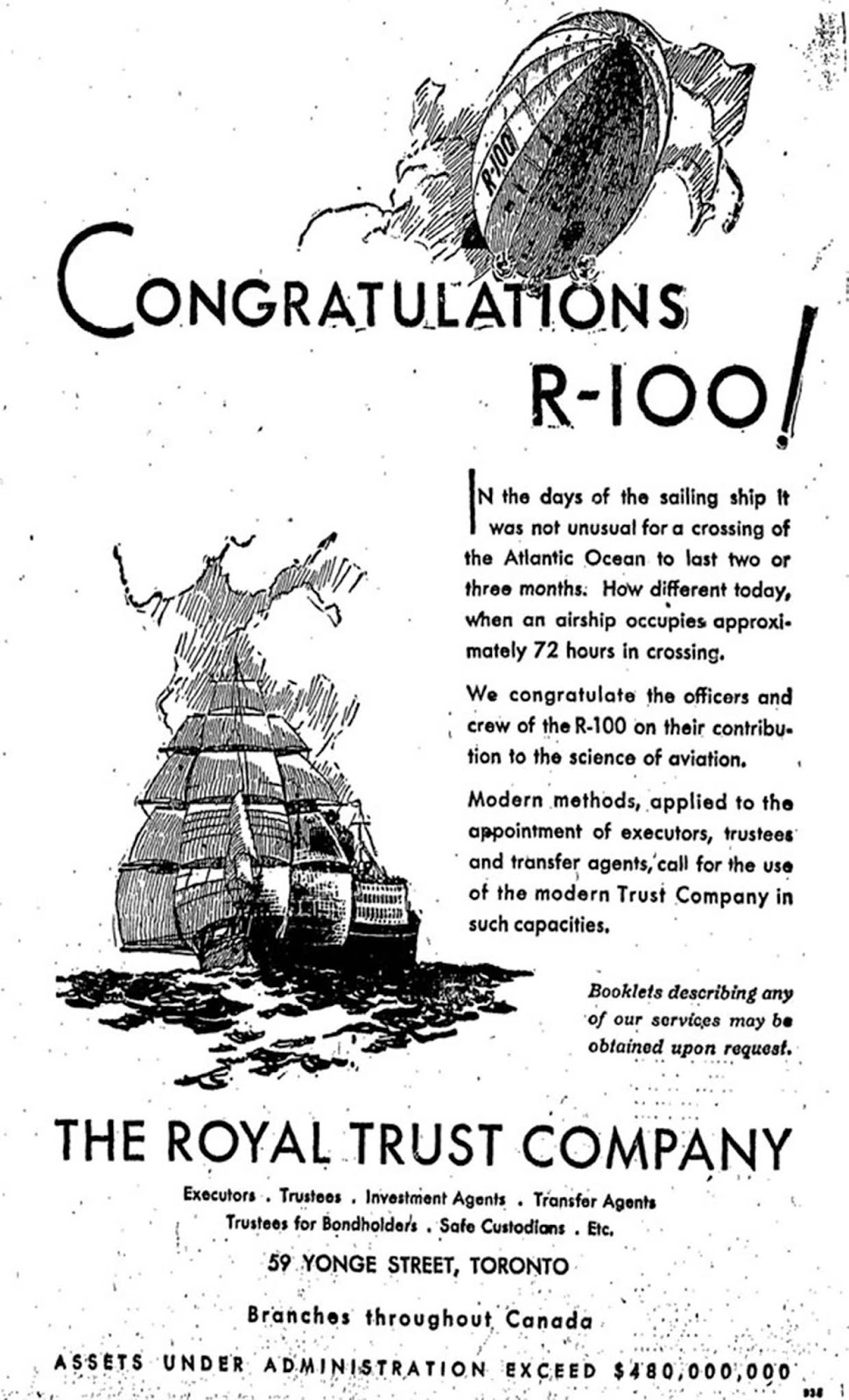 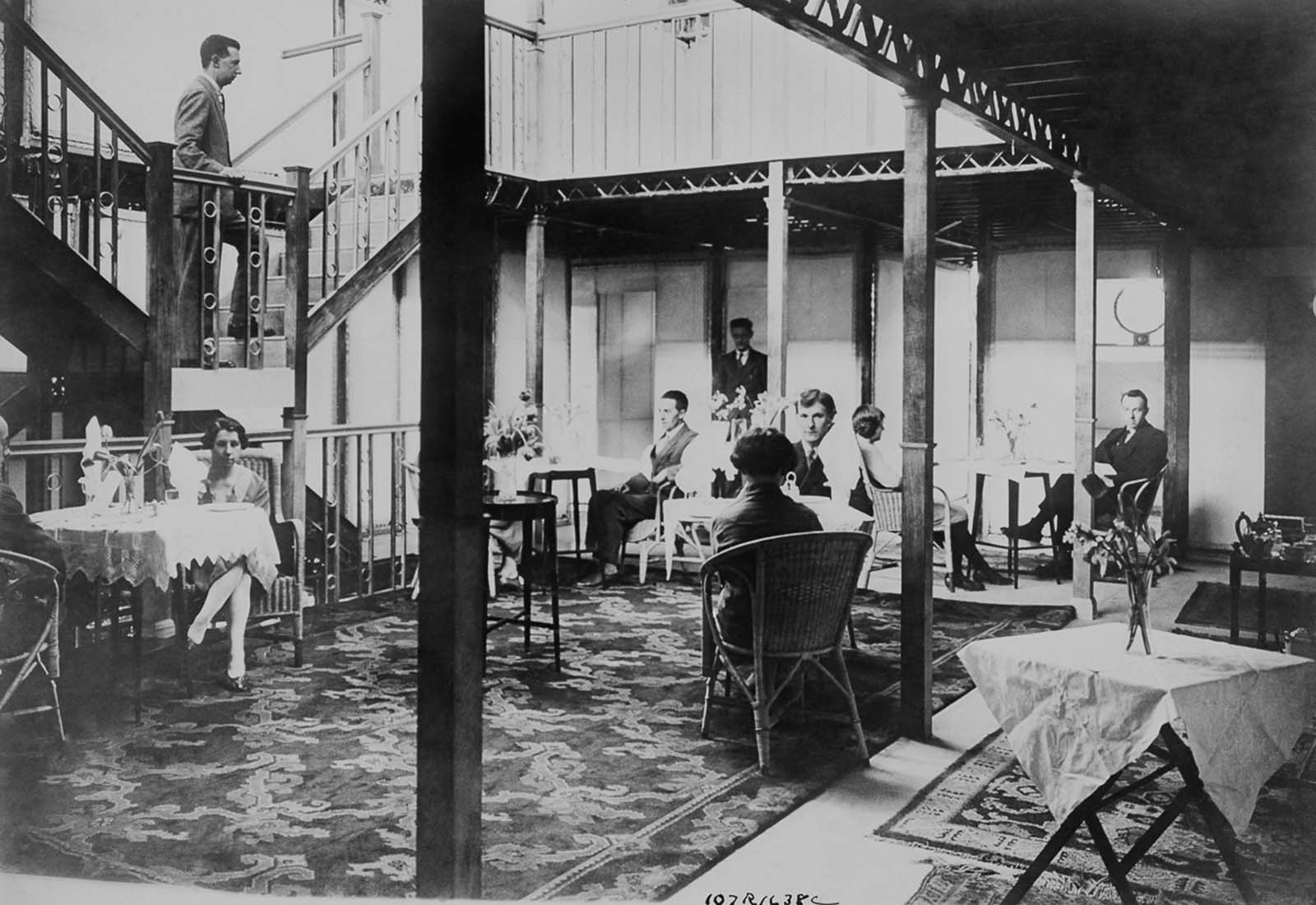 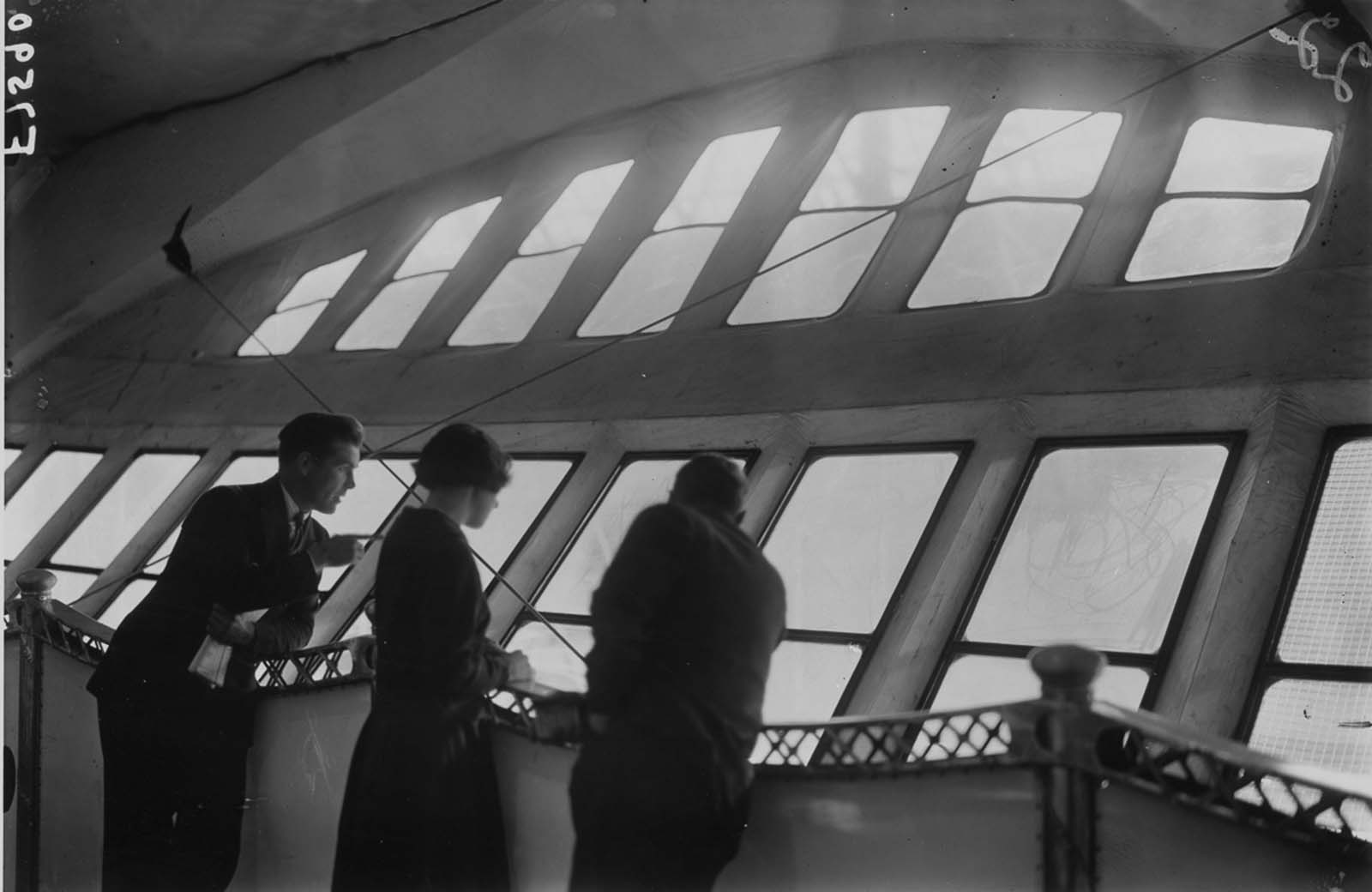 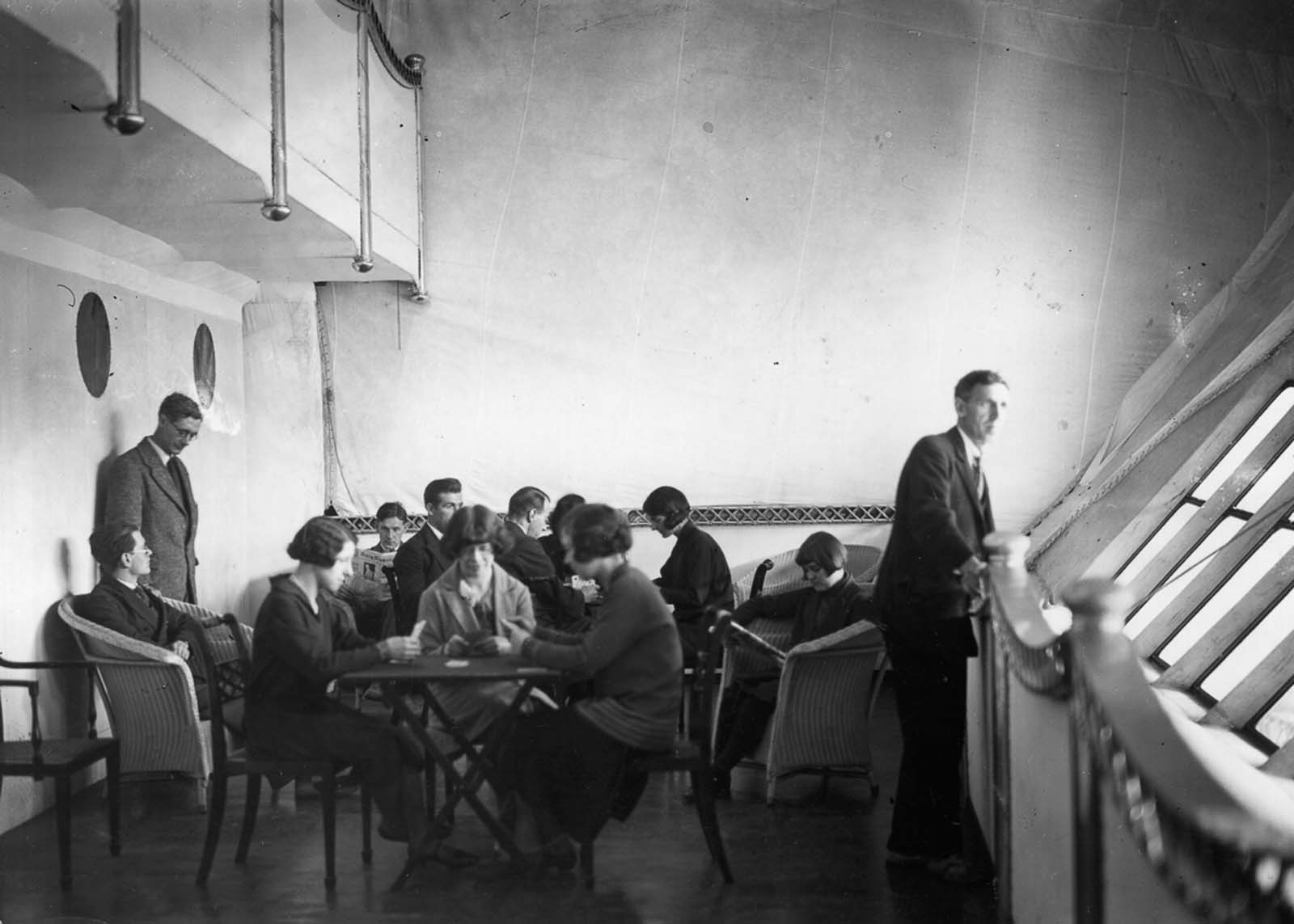 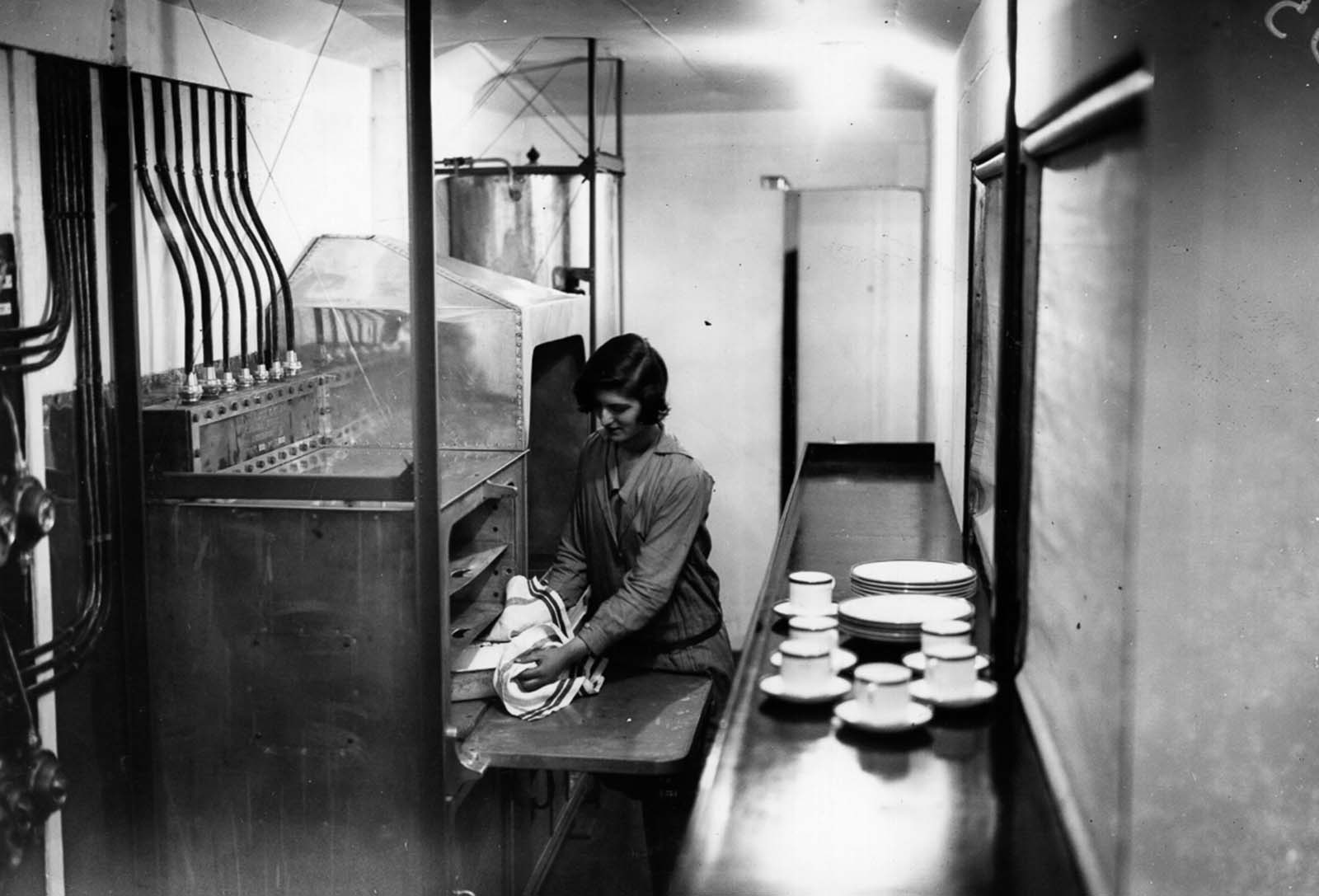 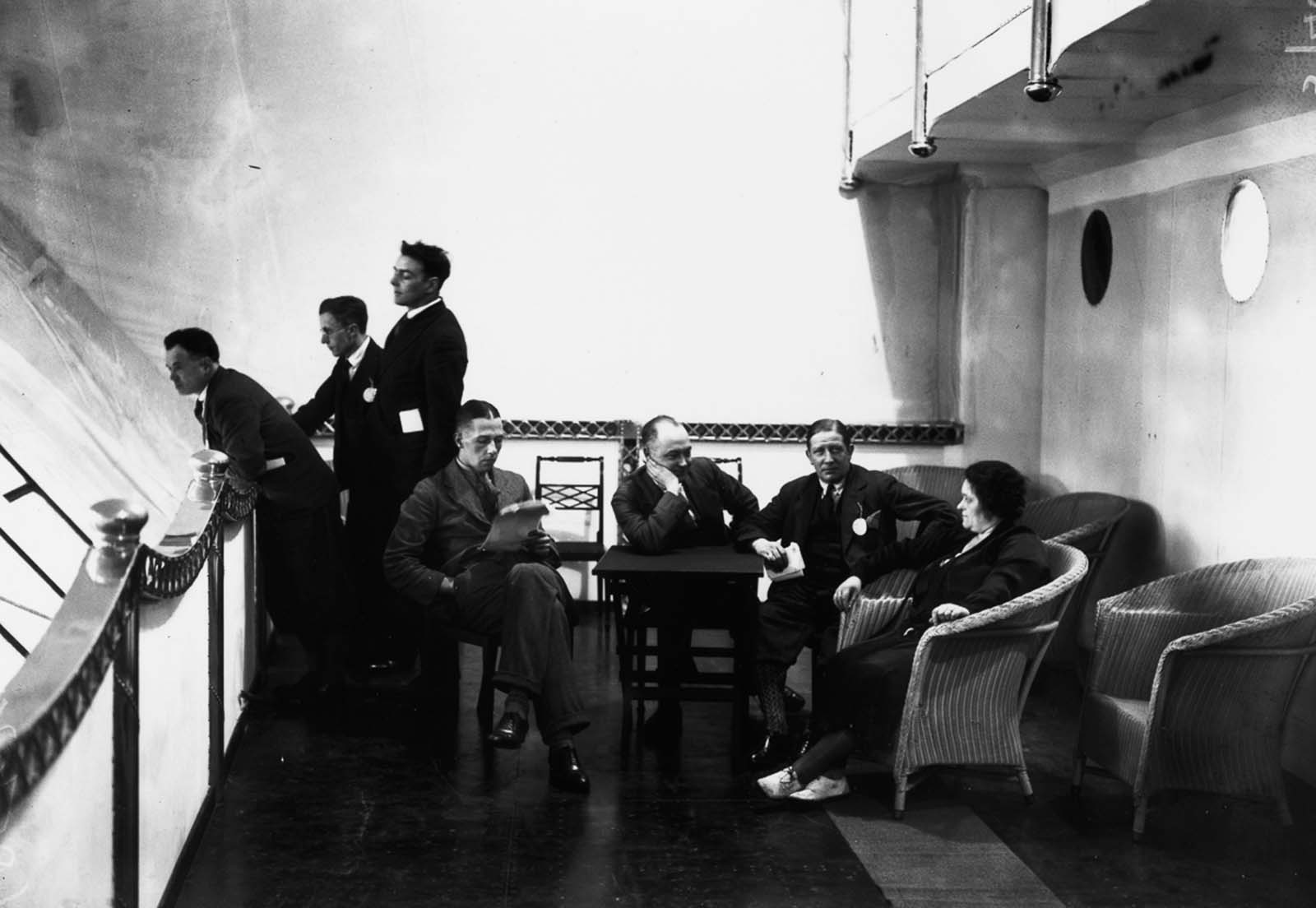 Passengers enjoying the views from above. 1929. 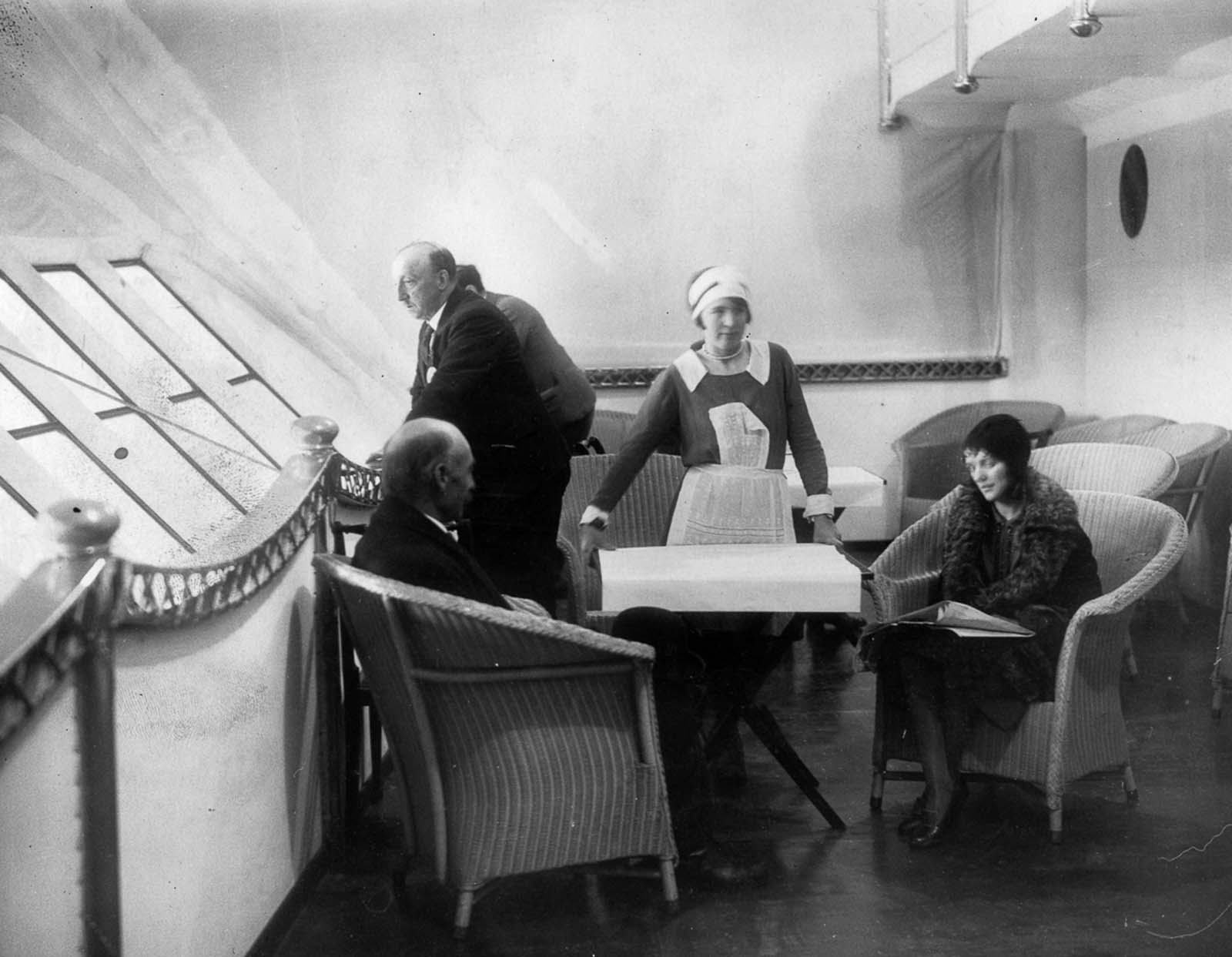 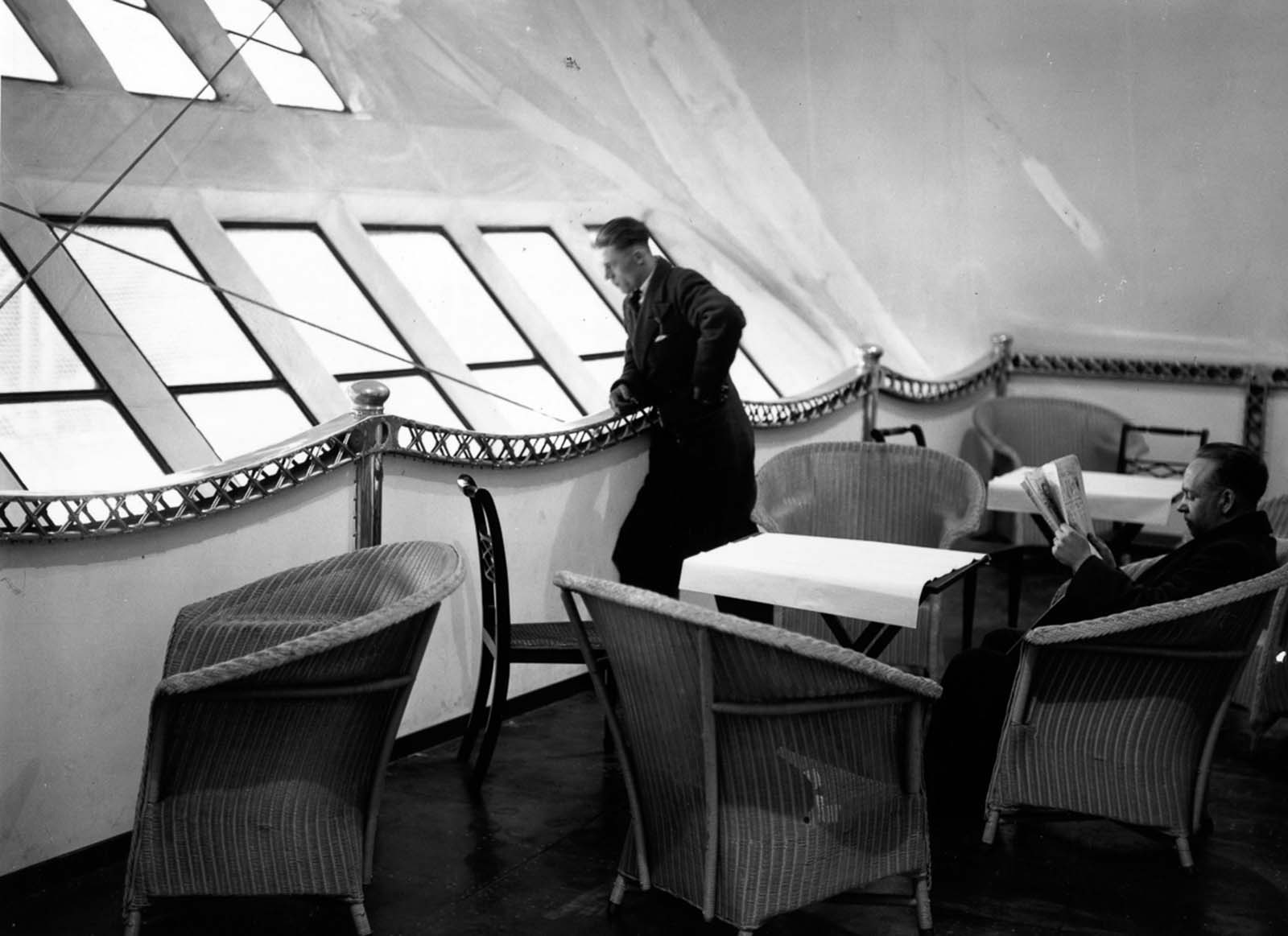 A passenger looking outside the R-100 panoramic windows. 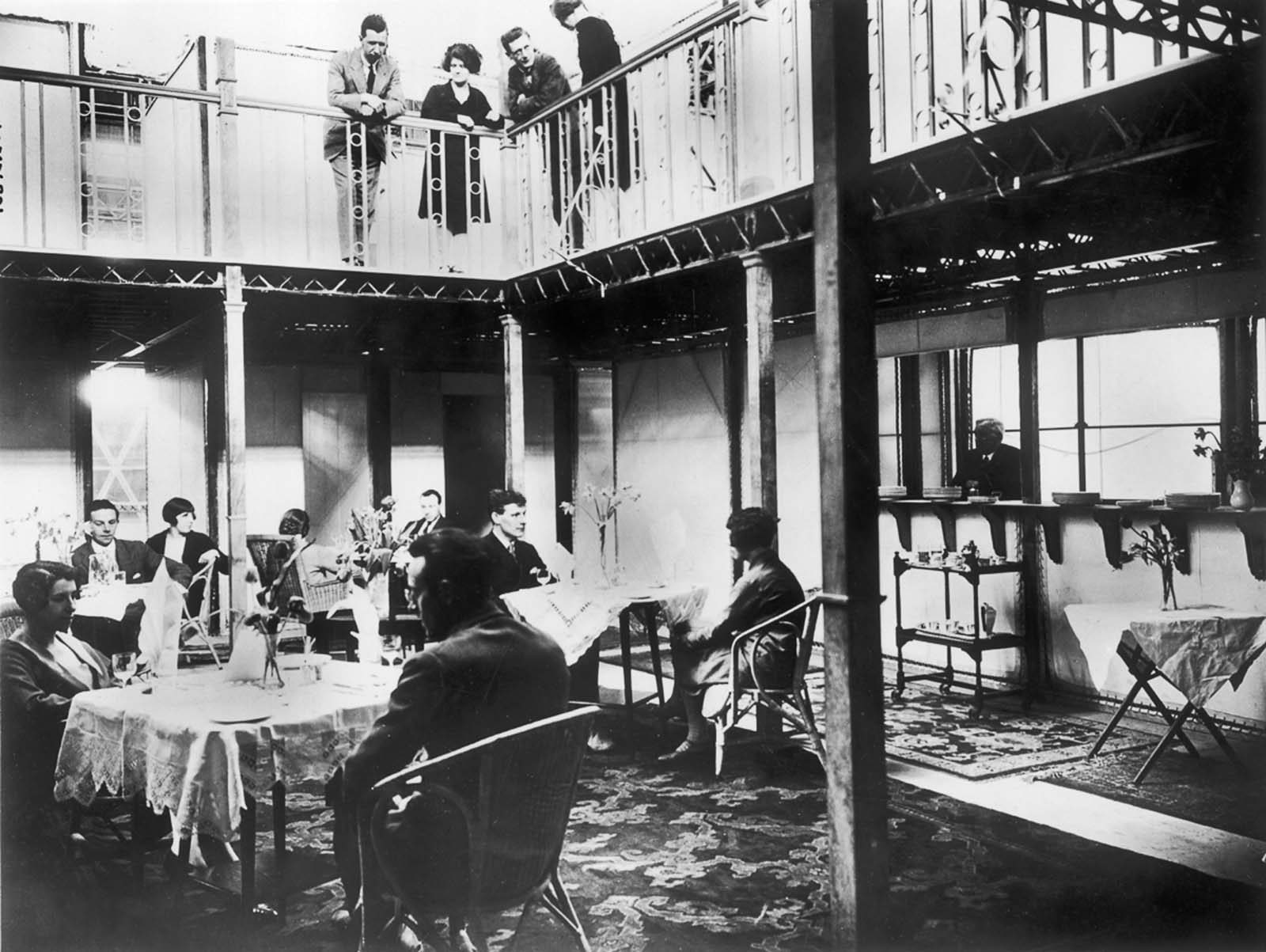 Passengers hang around the salon and upper gallery. 1930. 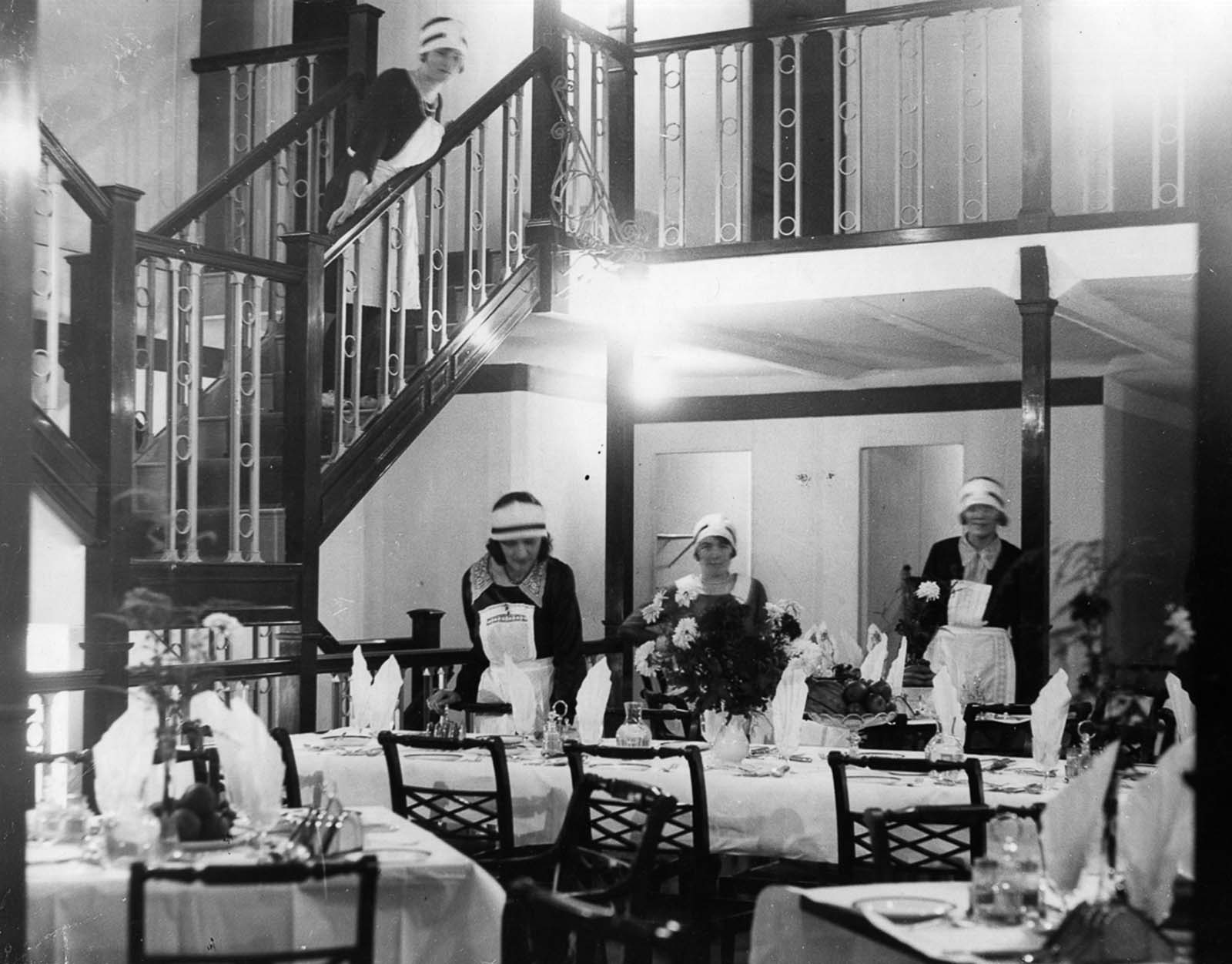 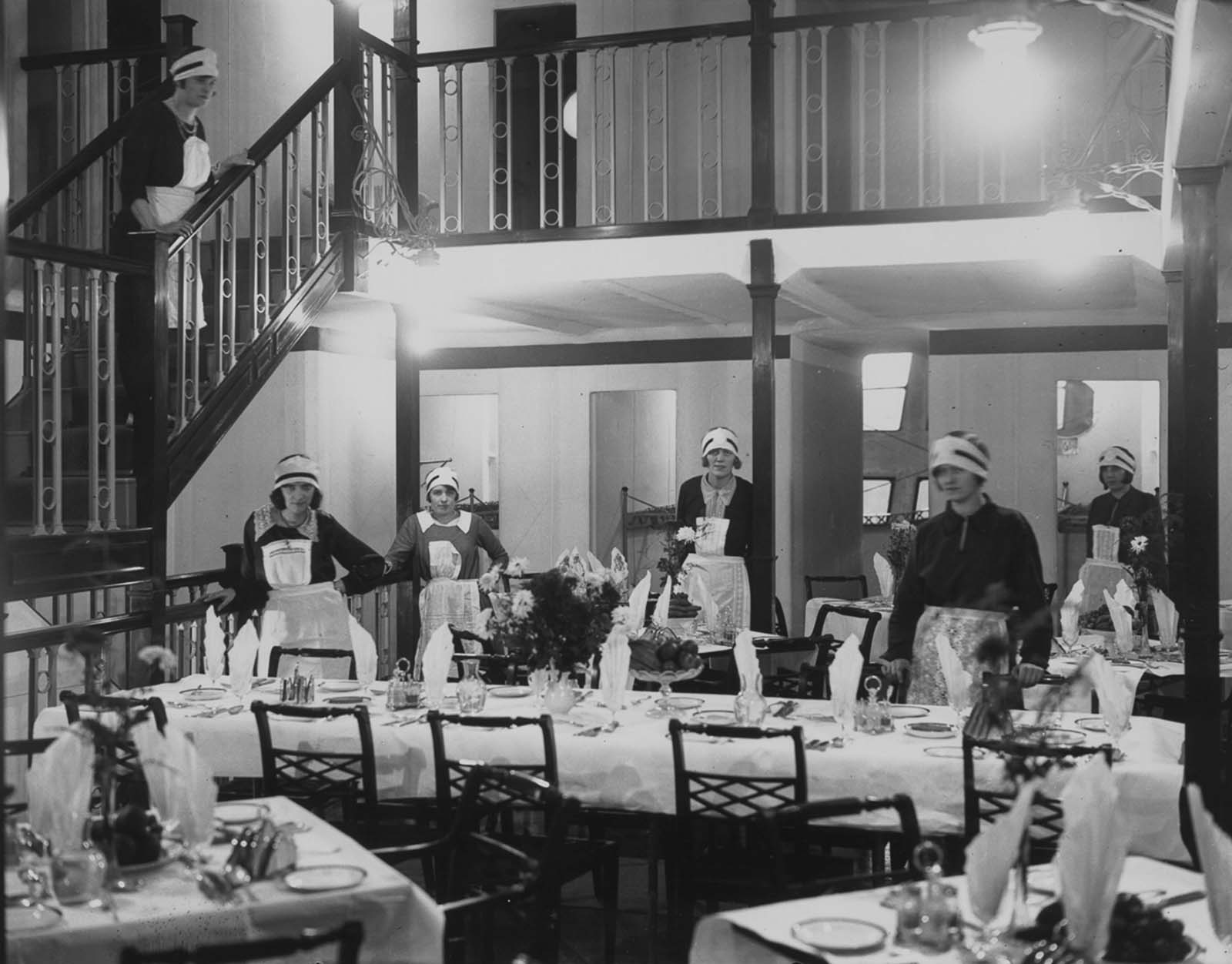 The lounge is rearranged as a dining room for meals. 1929. 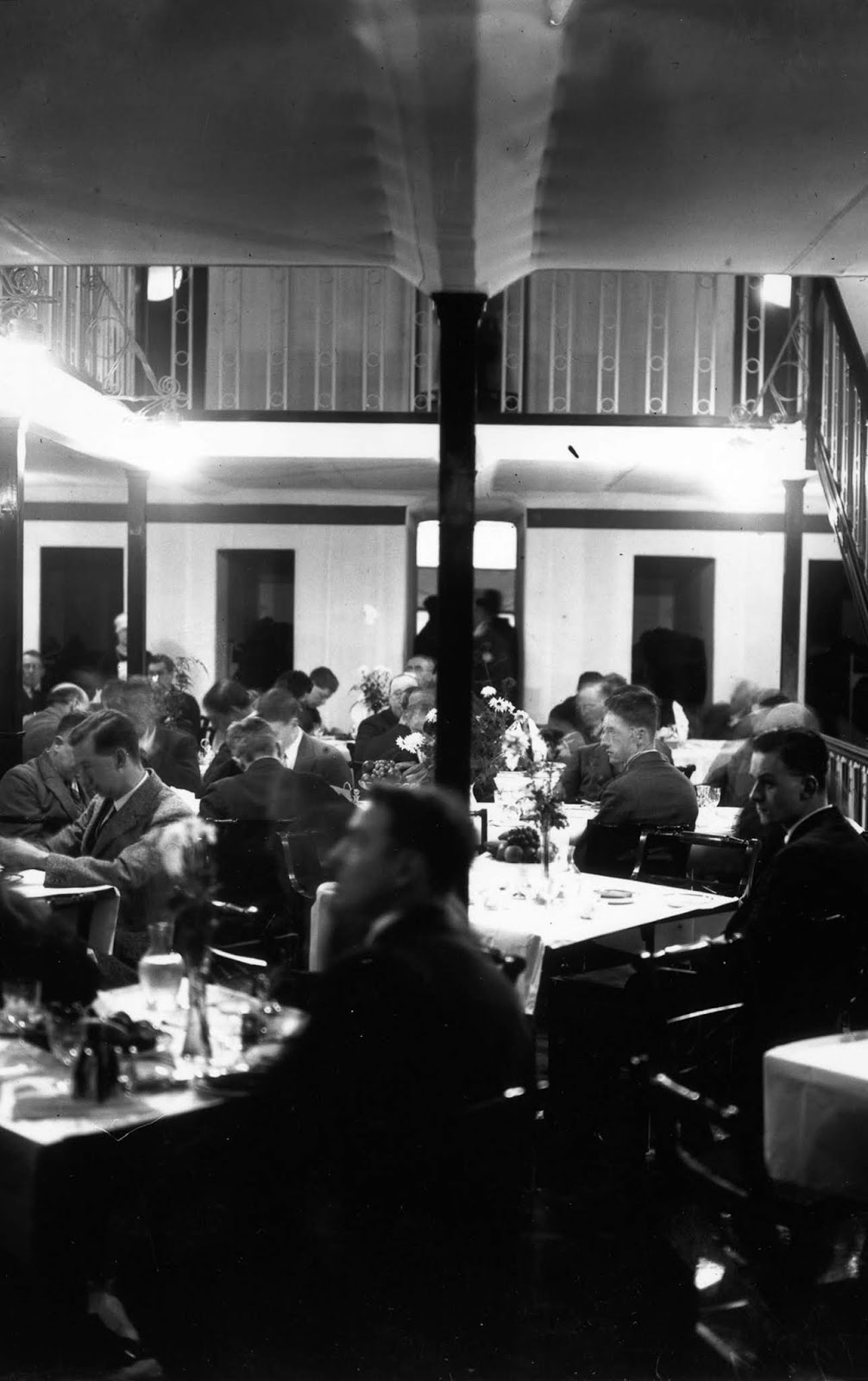 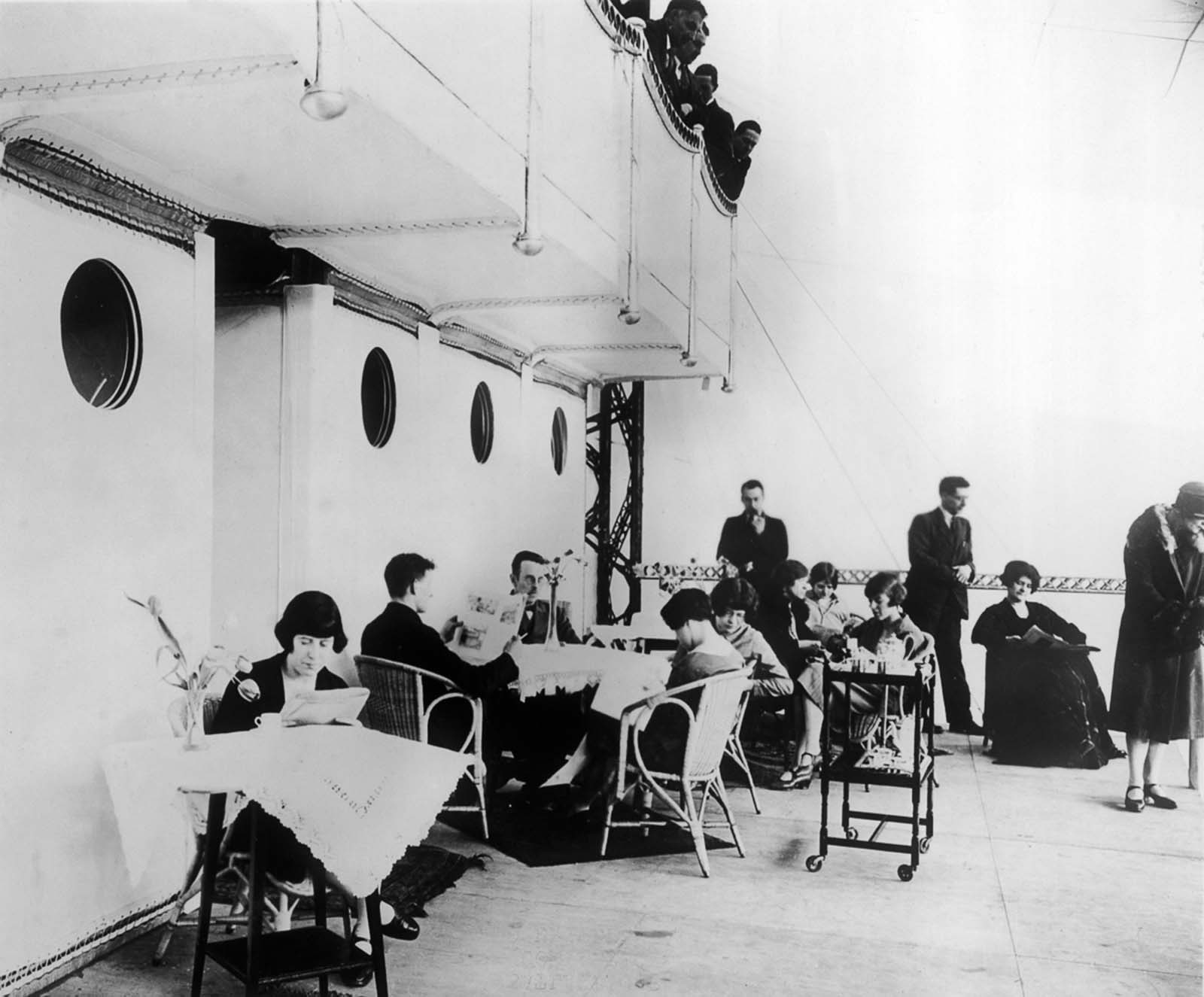 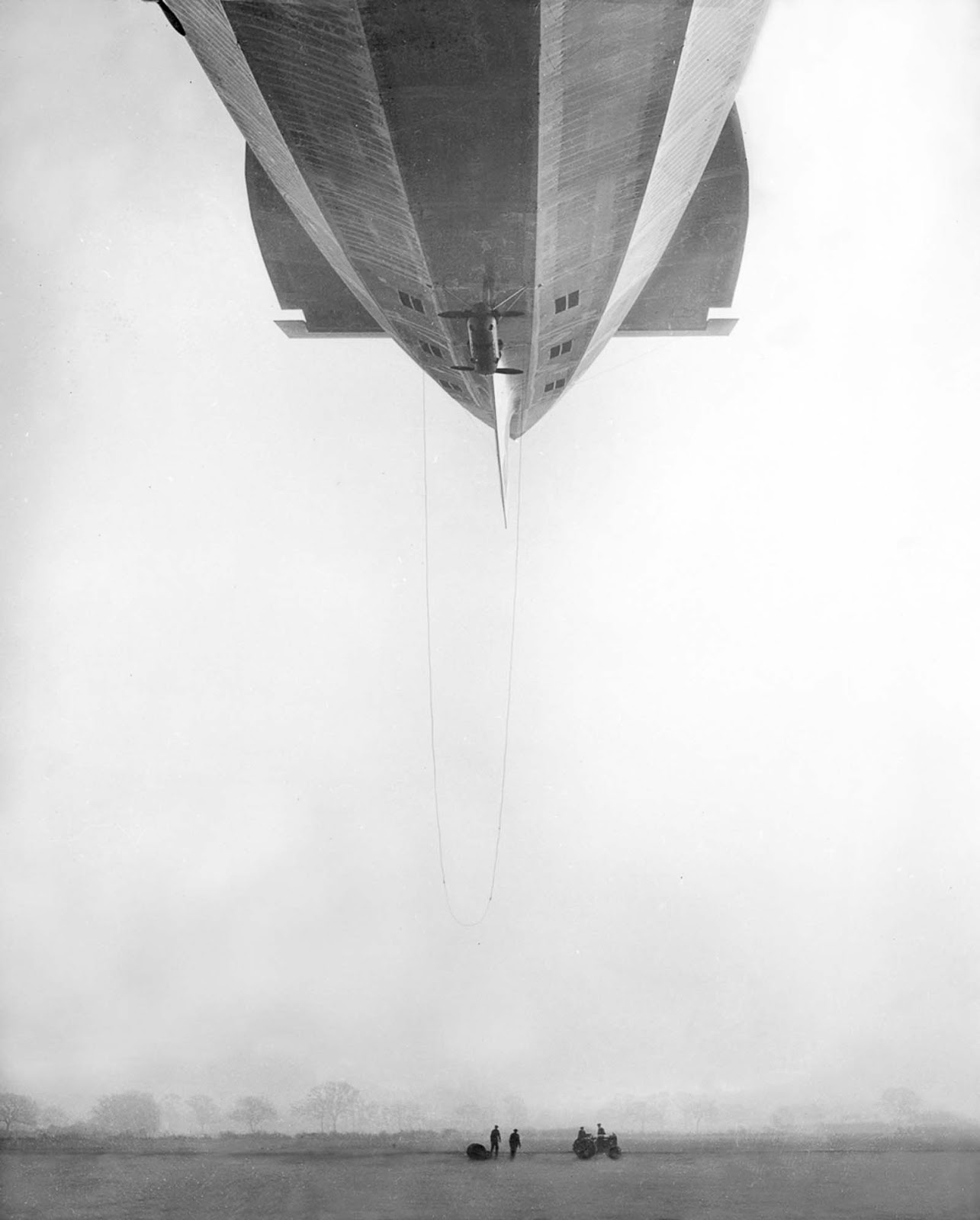 The R-100 leaves her mooring on her maiden voyage.